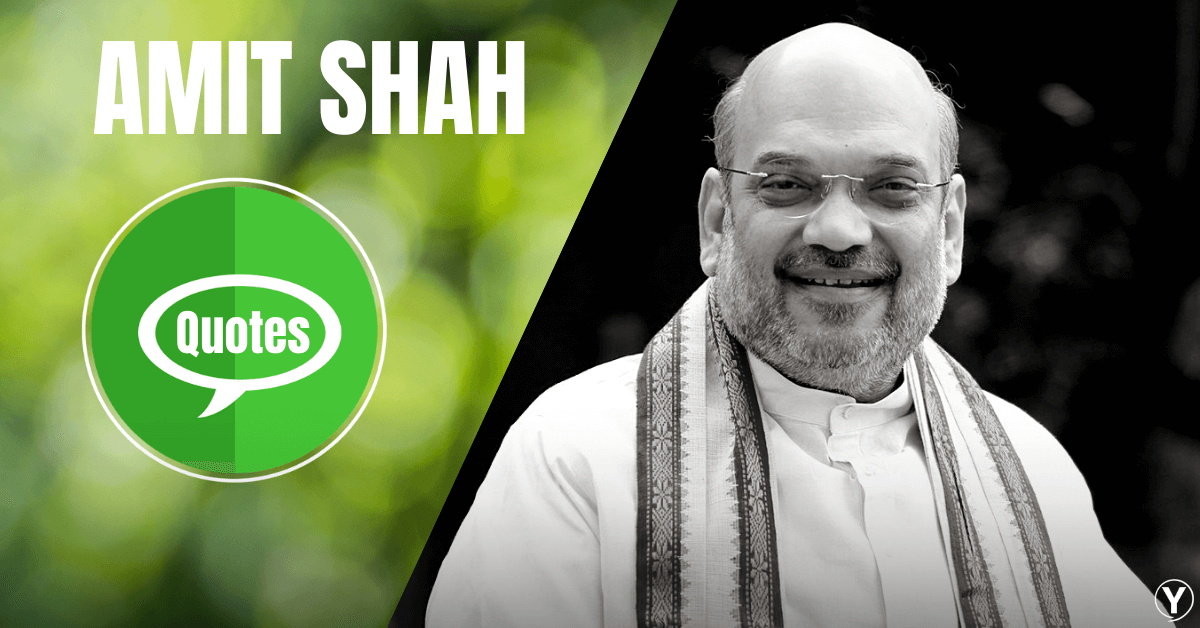 Amit Shah’s full name Amit Anil Chandra Shah is a famous Indian Politician. Currently, he is serving as Minister of Home Affairs and an active President of the Bharatiya Janata Party (BJP) since 2014. This leader is the Chief strategist of the BJP and a close aide to PM Narendra Modi.

Mr. Shah was born on 22nd October 1964 in Mumbai, Maharashtra. Mr. Shah was born to Anil Chandra Shah, a businessman from Mansa, who owned a successful PVC pipe business. He was born in a wealthy well-to-do Gujarati Hindu Baniya family. Amit Shah married Smt. Sonal Shah and are blessed with a son Jay Shah.

Amit Shah completed his graduation in Biochemistry from CU Shah Science College at Ahmedabad. Then he started handling his father’s business. In meanwhile he also worked as a stockbroker and in co-operative banks in Ahmedabad. At the age of 14 years, he joined Rashtriya Swayamsevak Sangh (RSS). Then after he used to attend local branches of the RSS. He became a volunteer for RSS during his college days.

In 1982, he met Narendra Modi for the first time. At that time Mr. Modi was an RSS Promoter, who was handling the in-charge of the youth activities in Ahmedabad. Amit Shah came into the limelight for his excellent management and qualities. He became the election campaign manager for Lal Krishna Advani in Gandhinagar during the 1991 Lok Sabha elections.

After Narendra Modi became Prime Minister of India, Shah’s influence increased in the BJP party. He gained recognition and had been considered with the title of “Modern-day Chanakya and Master strategist”. Other leaders were too impressed by the skills that Shah displayed in wresting control of various Congress-controlled organizations in Gujarat. And finally, on 9th July 2014, he was appointed as President of the BJP Party. Then on 30th May 2019, he took an oath as Cabinet Minister, also handling the office as Minister of Home Affairs.

As the leaders of the party as highly influenced by this great personality, let’s check out some of the golden words by this politician. Let’s go through the best Amit Shah Quotes.

“Wherever I go, the people respond positively to me, they give me respect.” — Amit Shah 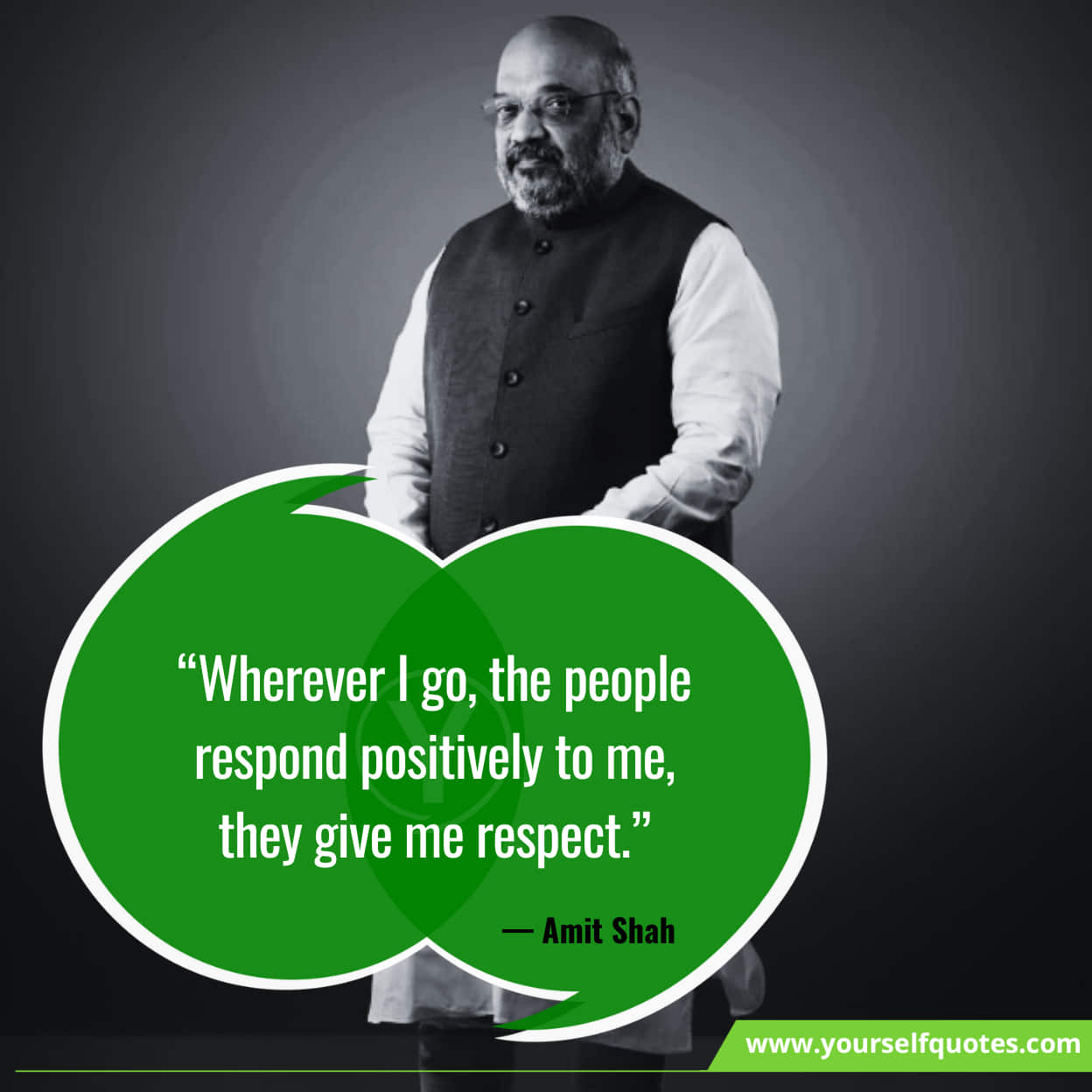 “In public life, differences should not deter us from acknowledging the good work done by others whom we may not agree with.”

“I have a track record of accepting my party’s decisions. I do whatever work is given to me with determination. That’s all.” — Amit Shah

“Election of 2019 is the choice of ideological warfare.” — Amit Shah

“If you want to move forward in life set a goal first work is no small doing little work It takes practice to do great things.” — Amit Shah 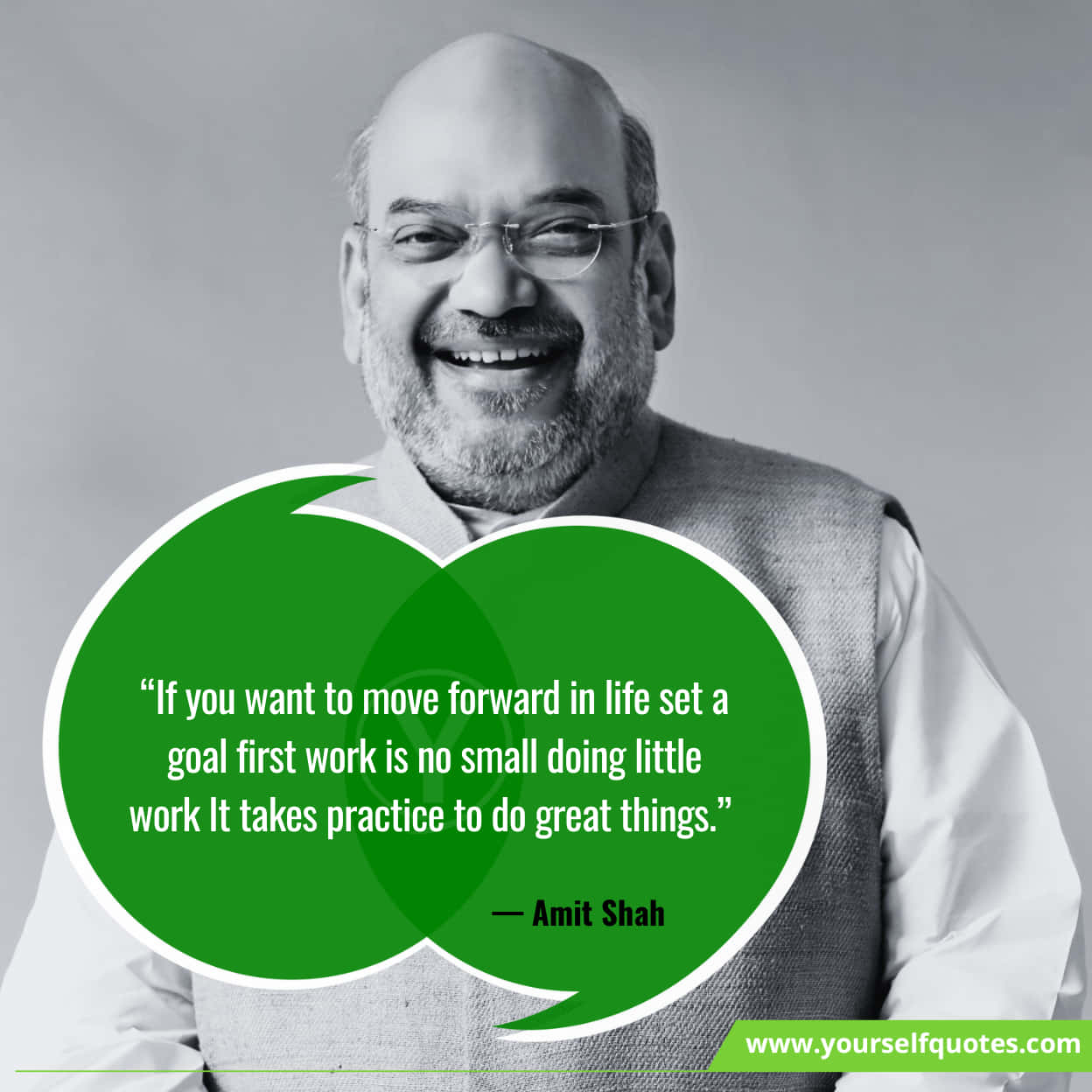 “The Government of Bharatiya Janata Party has the right to live with respect by making 9 crore toilets in four and a half years. BJP has been constantly striving to make India free from open defecation.” — Amit Shah

“The whole world is looking at India with respect. India will be in the top five economies by March. From Nehru to Rahul, they have been promising to eradicate poverty. But what happened?” — Amit Shah 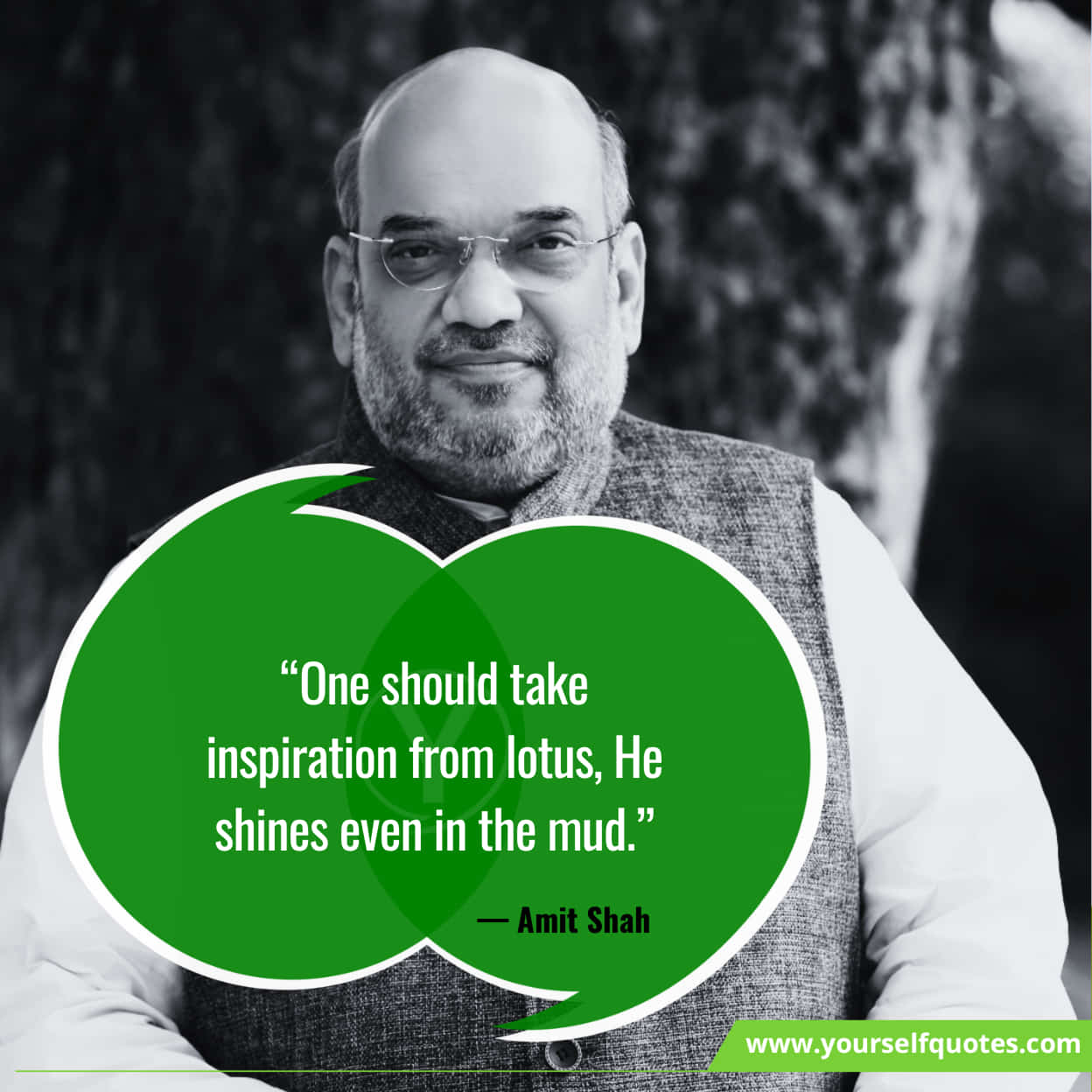 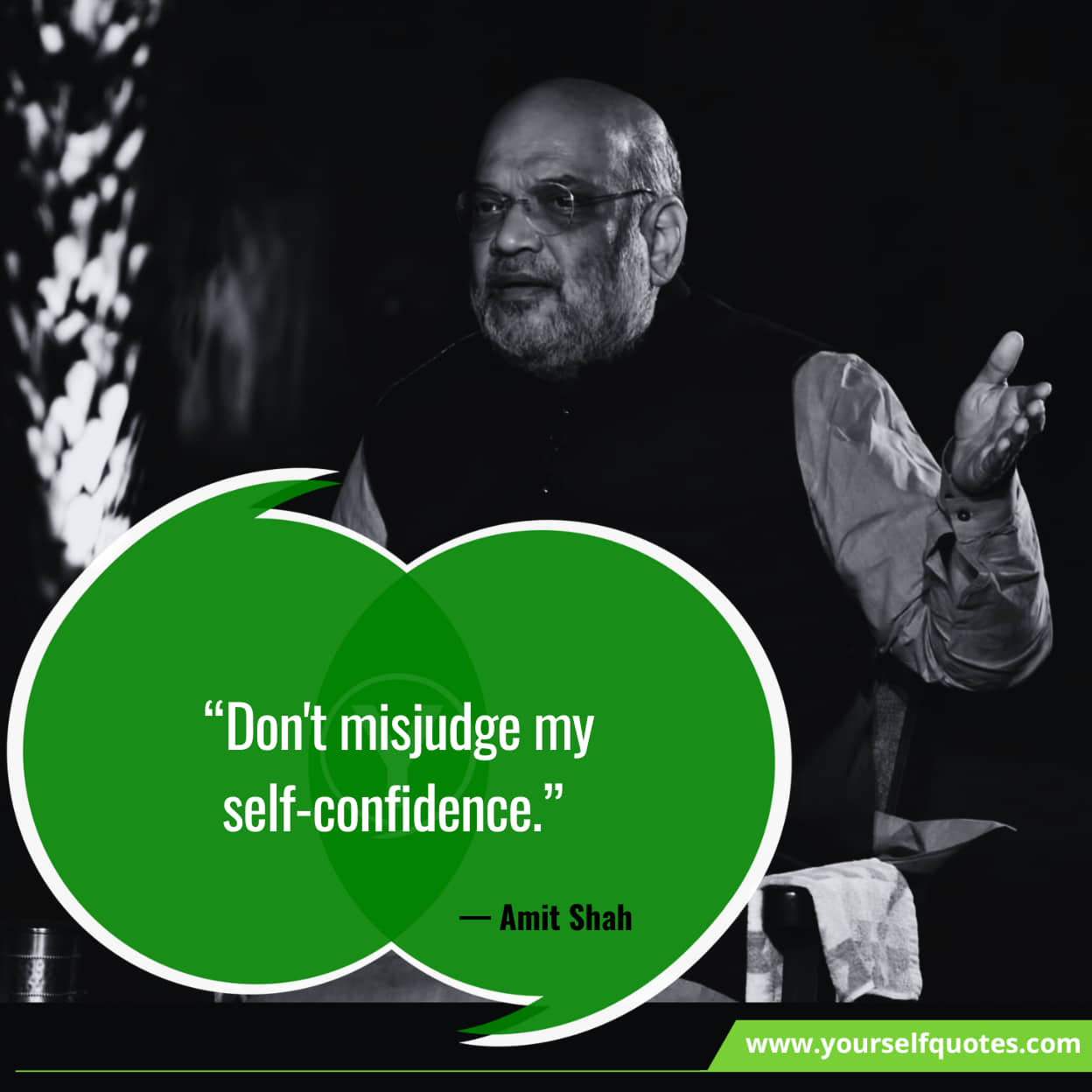 “When i say india so i mean whole of india PoK and Aksai Chin also.” — Amit Shah 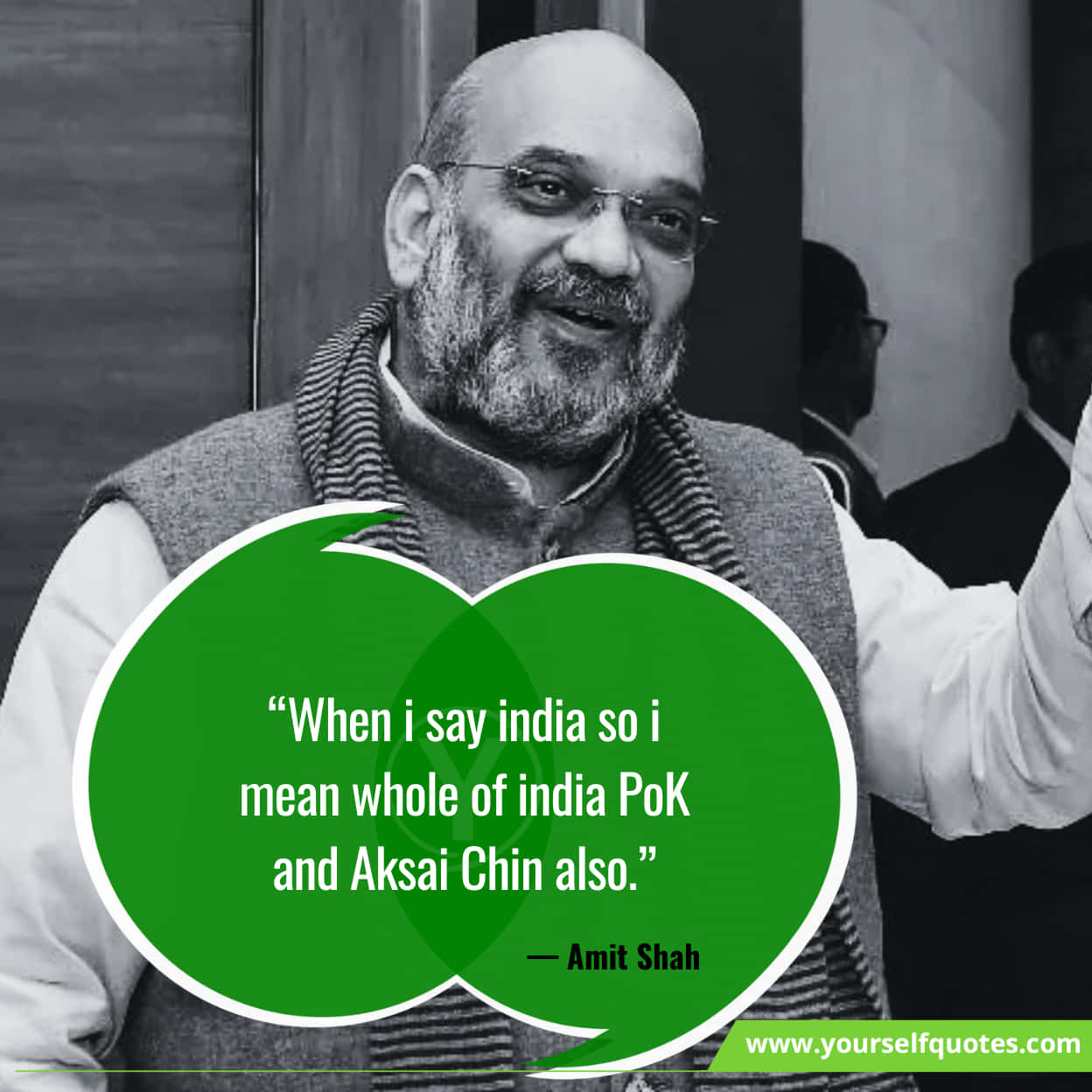 “The structure of GDP has changed. Eight crore households have access to toilets now, shouldn’t that reflect in the GDP? Data should be aligned with development priorities. Economists should think about it.” — Amit Shah

“People should decide if they trust India’s armed forces or not, those who are doubting are helping Pakistan.” — Amit Shah

“Until the youth of the country progress he will not be made independent Till then the development of the country is not possible. To realize the dream of New India The youth have to come forward.” — Amit Shah

“Cleanliness in the country is not possible without public participation Cleanliness is relevant not only of the place but also of the mind.” — Amit Shah

“If governments act with full willpower Even in one of his tenures, he did historical work. For which the public will always remember.” — Amit Shah

“Indian culture is world famous India is known by its culture It is the duty of all the countrymen to maintain it.” — Amit Shah 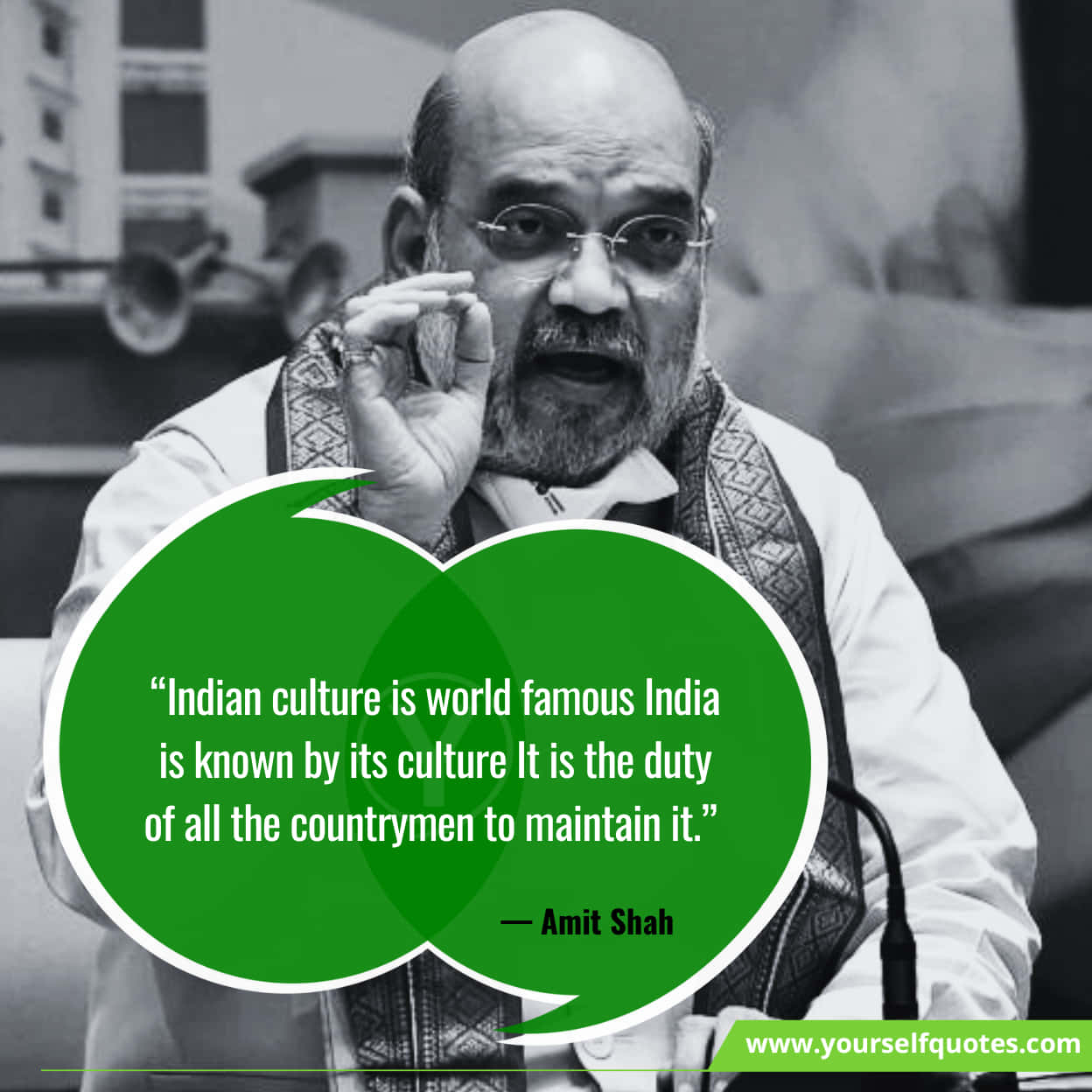 “Usually a person becomes arrogant after winning and discouraged seeing the face of defeat While overcoming these two A person can make himself great.” — Amit Shah

“For any struggling person nationalism should be his inspiration And Antyodaya ultimate goal.” — Amit Shah

“One should think above politics Should work in the interest of the party, organization etc. Ideology cannot be above the nation.” — Amit Shah

“India respects all religions This constitution gives him the right by strangling that constitution Rights should not be violated.” — Amit Shah

“A police complaint has been registered against the so-called homecoming program and the matter has reached the court. … Let the court decide if it was a forceful conversion or not.” — Amit Shah

“Education is not the property of any one class or community Everyone has equal right to education No one can be deprived of this right.” — Amit Shah 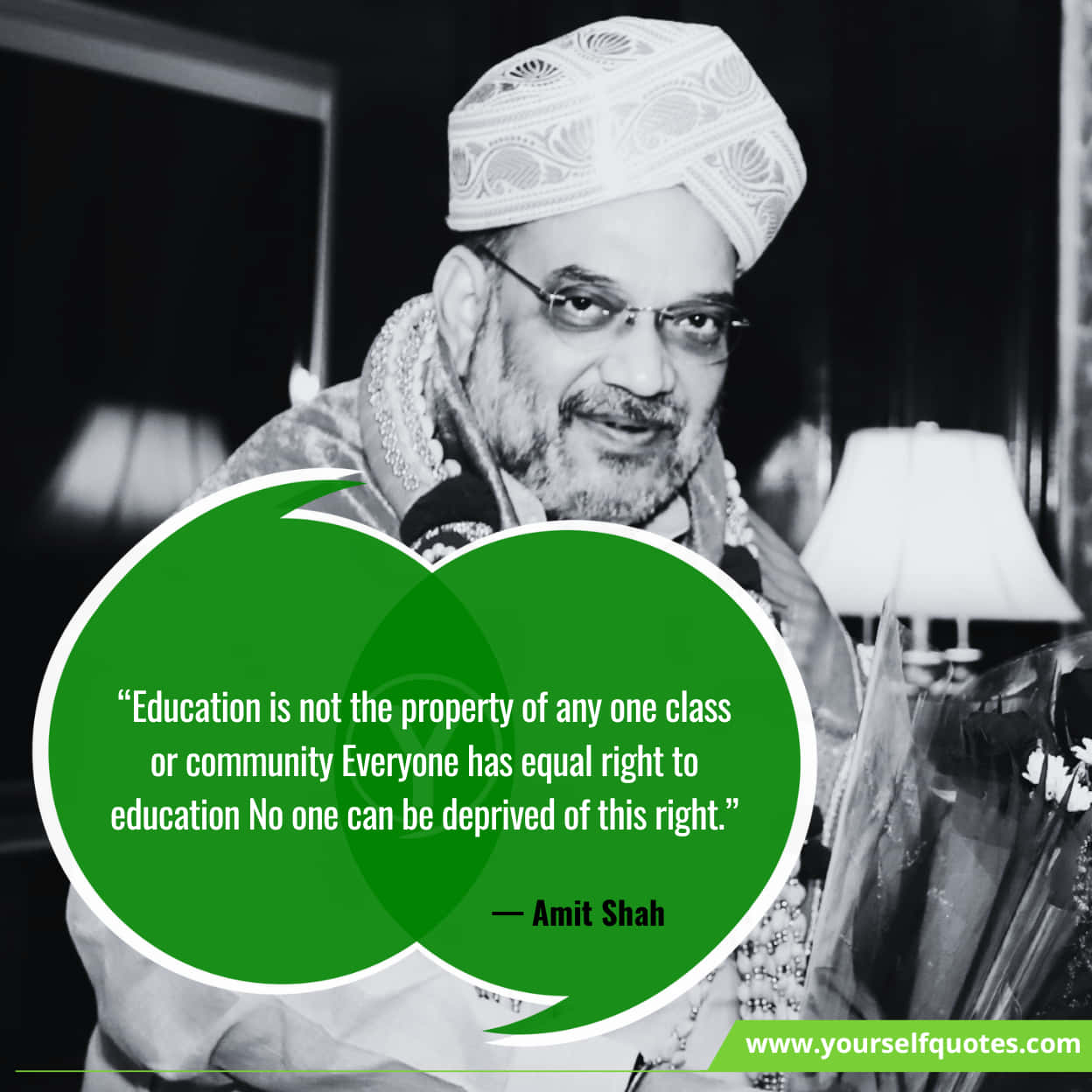 “I’m a dwindling sea I will definitely come back.” — Amit Shah

“Every time I have fought elections, I have improved my victory margins. ” — Amit Shah

“In no religion is beef-eating a part of faith.” — Amit Shah

“No government in any country can run on static definitions of economic thinking.” — Amit Shah 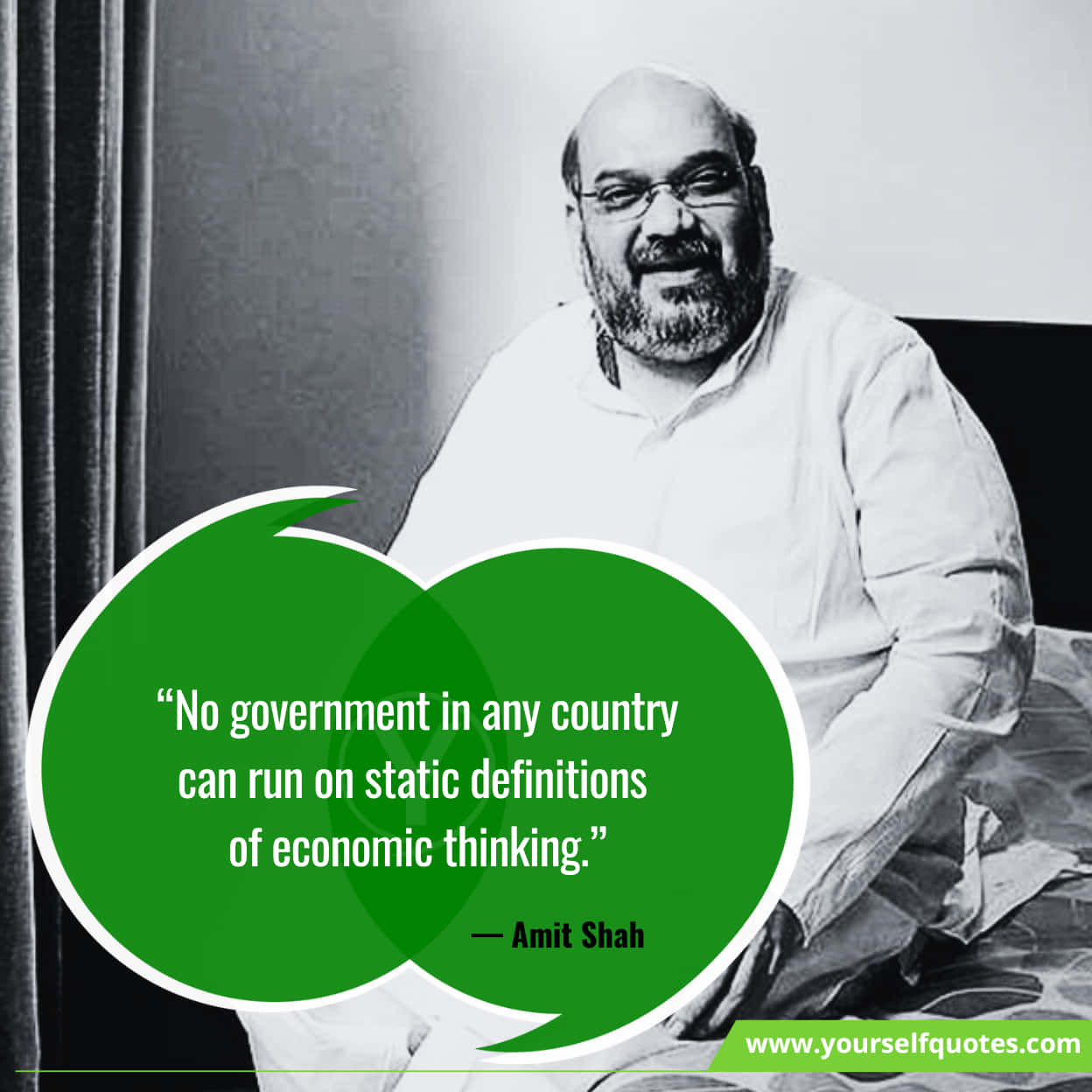 “This is a country of strong beliefs. Just because some two people say something, people don’t bow down.” — Amit Shah

“The BJP’s decisions are never based on victory and defeat in elections.” — Amit Shah

“Those who carry out anti-national activities should be put in jail.” — Amit Shah

“My task will remain incomplete until a BJP chief minister is installed in Lucknow.” — Amit Shah

“Since when has delivered a fitting reply to a terror attack become politicization of security.” — Amit Shah

“All parties have one leader at the top who is the first among equals.” — Amit Shah

“How can we be a better person should think day and night for it nothing is better than excellence, This is the accumulated capital of life.” — Amit Shah 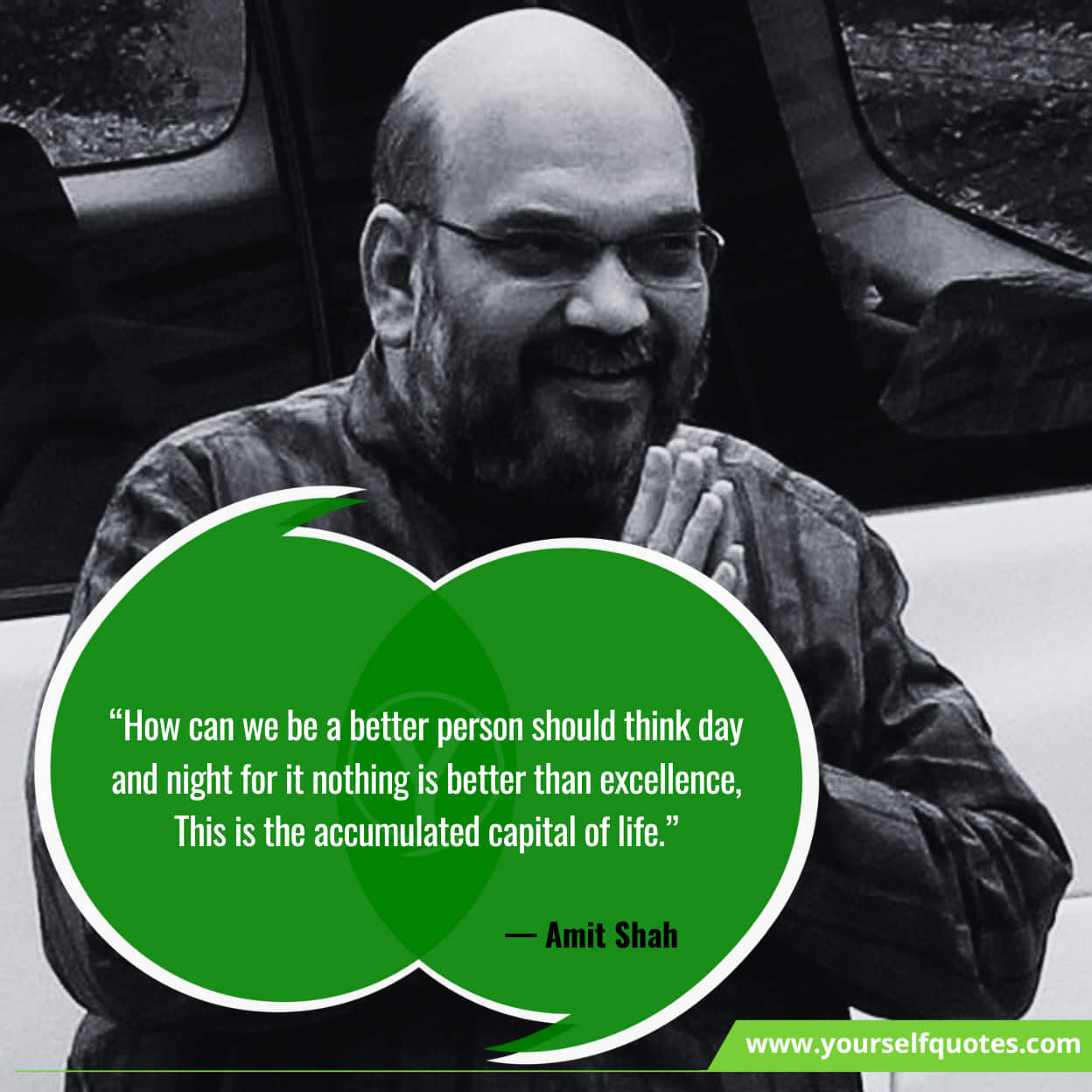 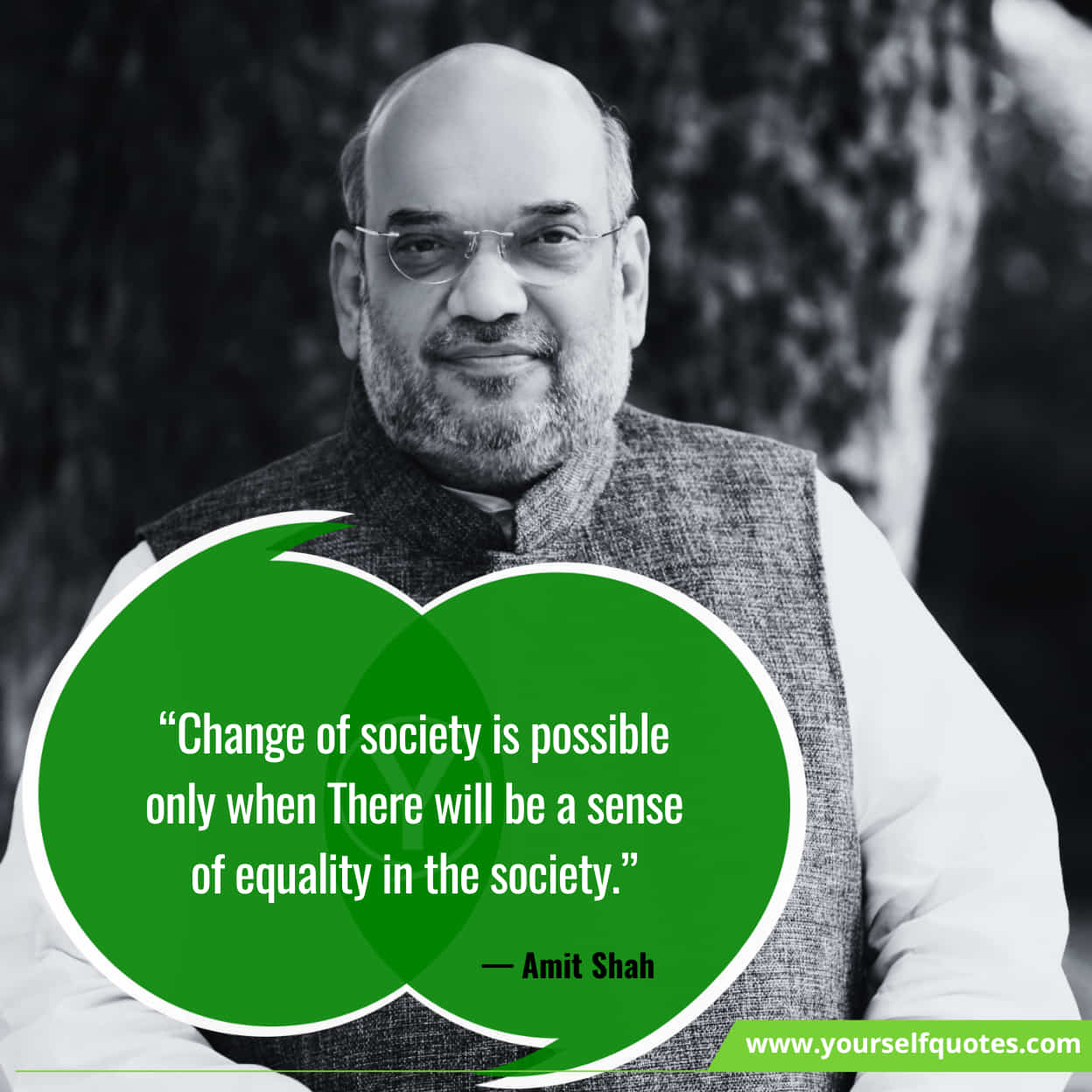 Amit Shah, the Chanakya of Indian Politics is a hard-working and skilled leader of the BJP. His contribution to the BJP party is very significant. He played a very dominant and promotional role in the party. Under his leadership, Indian politics has grown up to new heights.

He has played an organizing and membership-promotional role in elections of many states since 2014. This leader played an iconic role in the party’s emergence as a dominant force in Indian politics and has become the face of an all-new BJP. Shah is a prominent figure under the BJP government with high expertise and experience in his field.

I hope you enjoyed knowing about this great Indian Politician. If yes, then do share these influencing Amit Shah Quotes with your family, friends, and loved ones.

Which are your favorite Amit Shah Quotes? Leave a comment below.