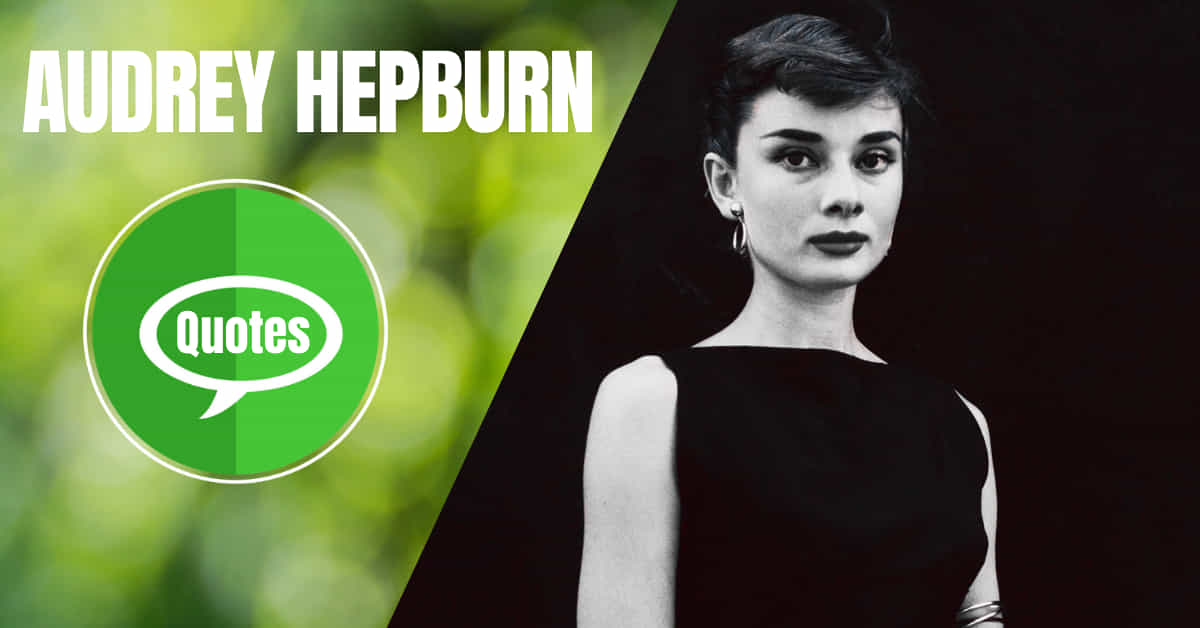 Audrey Hepburn was an actress and humanitarian from the United Kingdom. She was named the third-greatest female screen legend from Classical Hollywood cinema by the American Film Institute, and she was inducted into the International Best Dressed List Hall of Fame.

Audrey was born to Baroness Ella van Heemstra, who was a Dutch noblewoman, and Joseph Victor Anthony Ruston, who was a Honorary British Consul in Semarang in the Dutch East Indies.

Hepburn was born into an aristocratic family in Ixelles, Brussels, and spent her childhood in Belgium, England, and the Netherlands. From 1945 to 1948, she studied ballet with Sonia Gaskell in Amsterdam and Marie Rambert in London. She began her career as a chorus girl in West End musical theatre productions before making minor film appearances.

She rose to fame alongside Gregory Peck in the romantic comedy Roman Holiday, for which she won an Oscar, a Golden Globe Award, and a BAFTA Award for a single performance. Her performance in Ondine earned her a Tony Award for Best Lead Actress in a Play that same year.

Hepburn caught the eye of French novelist Colette while working on a film in Monte-Carlo, and she thought Hepburn would be perfect for the title role in the stage adaptation of her novel Gigi. Despite her lack of experience, Hepburn was cast in the play, which premiered on Broadway in 1951 and received rave reviews.

Her next project took her to Rome, where she starred in Roman Holiday, her first major Hollywood film (1953). Hepburn won an Academy Award for best actress for her performance as a young princess who trades the responsibilities of royalty for a day of adventure and romance with a reporter (played by Gregory Peck).

Hepburn made her comeback as a water nymph in Ondine in early 1954, costarring Mel Ferrer, whom she married later that year. Her performance, which turned out to be her final on Broadway, earned her a Tony Award.

Below mentioned are some of the most rewarding work by Audrey Hepburn:

These are a few of her most acceptable work, and this list goes on.

In recognition of her work with UNICEF, US President George H. W. Bush bestowed the Presidential Medal of Freedom on Hepburn, and the Academy of Motion Picture Arts and Sciences bestowed the Jean Hersholt Humanitarian Award on her posthumously. UNICEF honored Hepburn’s humanitarian work by unveiling a statue, “The Spirit of Audrey,” at UNICEF’s New York headquarters in 2002 during the United Nations Special Session on Children. The Audrey Hepburn Society of the United States Fund for UNICEF honors her contributions to children.

On September 25, 1954, in Bürgenstock, Switzerland, Hepburn married American actor Mel Ferrer. Sean Hepburn Ferrer, their son, was born to them. The couple divorced in 1968 after a 14-year marriage. Hepburn then married Italian psychiatrist Andrea Dotti on January 18, 1969, and they had a son named Luca Andrea Dotti.

“A woman can be beautiful as well as intellectual.” ― Audrey Hepburn 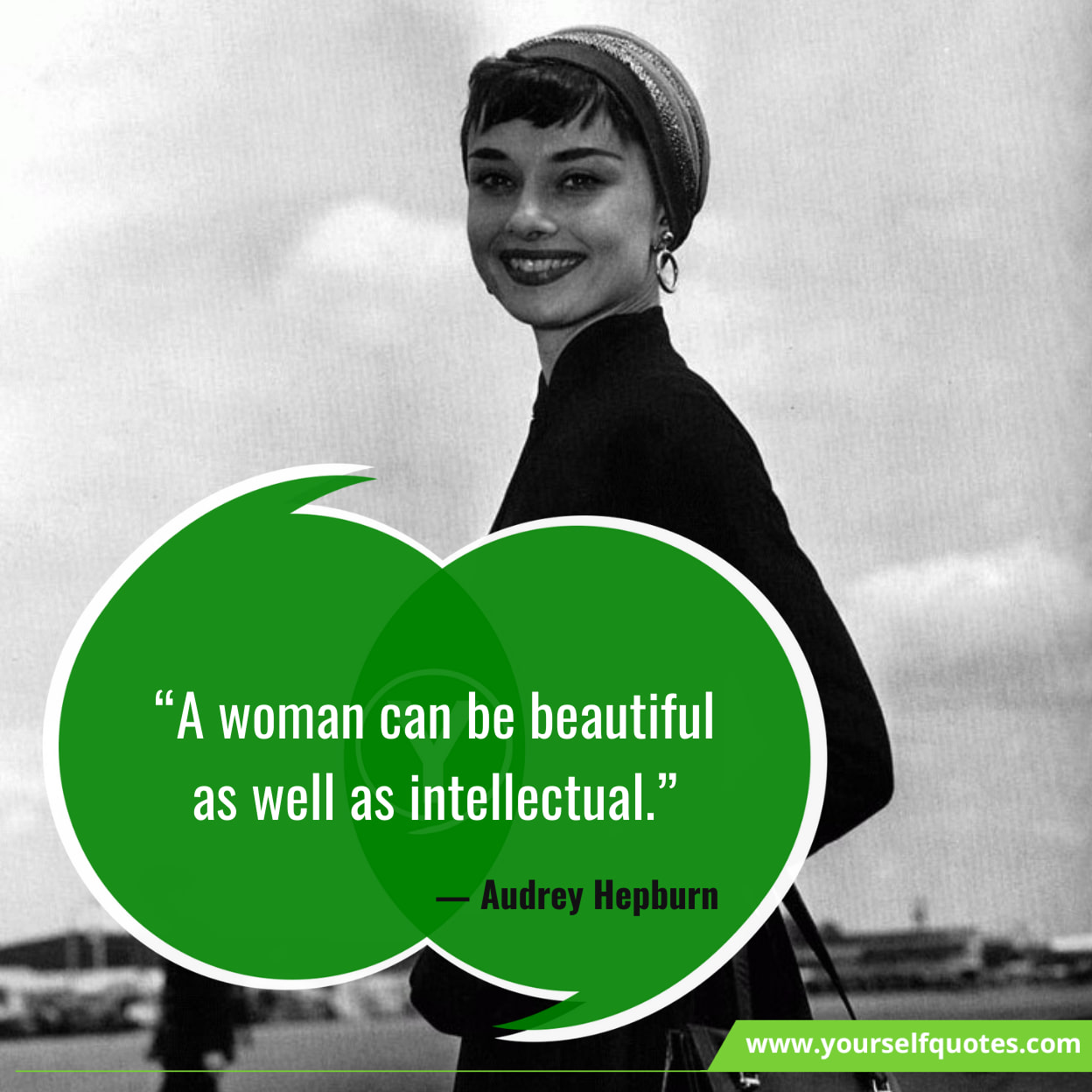 “The best thing to hold onto in life is each other.” ― Audrey Hepburn

“Opportunities don’t often come along. So, when they do, you have to grab them.” ― Audrey Hepburn

“Love is action. It isn’t just talking, and it never was.” ― Audrey Hepburn

“No matter where you run, you just end up running into yourself.” ― Audrey Hepburn

“Nothing is impossible, the word itself says “I’m possible“!” ― Audrey Hepburn

“I was born with an enormous need for affection, and a terrible need to give it.” ― Audrey Hepburn

“True beauty in a woman is reflected in the caring that she lovingly gives, the passion that she shows.” ― Audrey Hepburn

“The most important thing is to enjoy your life—to be happy—it’s all that matters.” ― Audrey Hepburn

“True friends are families which you can select.” ― Audrey Hepburn

“You can always tell what kind of a person a man really thinks you are by the earrings he gives you.” ― Audrey Hepburn

“Nothing is impossible, the word itself says ‘I’m possible!” ― Audrey Hepburn 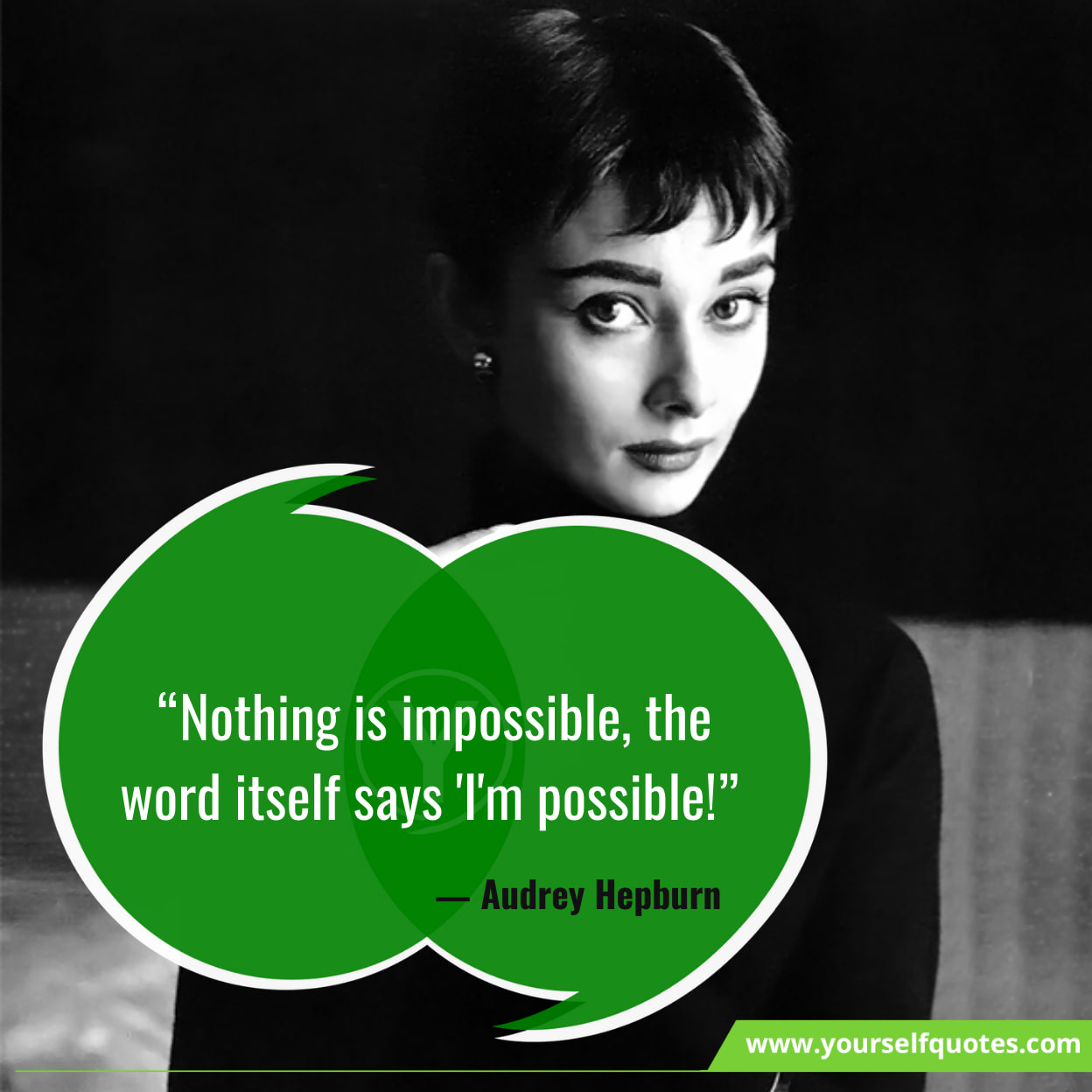 “I don’t want to be alone, I want to be left alone.” ― Audrey Hepburn

“Elegance is the only beauty that never fades.” ― Audrey Hepburn

“I love people who make me laugh. I honestly think it’s the thing I like most, to laugh. It cures a multitude of ills. It’s probably the most important thing in a person.” ― Audrey Hepburn

“If I’m honest I have to tell you I still read fairy-tales and I like them best of all.” ― Audrey Hepburn

“I have to be alone very typically. I’d be quite happy if I spent from Saturday night until Monday morning alone in my apartment. That’s how I refuel.” ― Audrey Hepburn

“Why change? Everyone has his own style. When you have found it, you should stick to it.” ― Audrey Hepburn

“I heard a definition once: Happiness is health and a short memory! I wish I’d invented it because it is very true.” ― Audrey Hepburn

“I’ve been lucky. Opportunities don’t frequently come along. So, when they do, you have to grab them.” ― Audrey Hepburn

“The most important thing is to enjoy your life—to be happy—it’s all that matters.” ― Audrey Hepburn 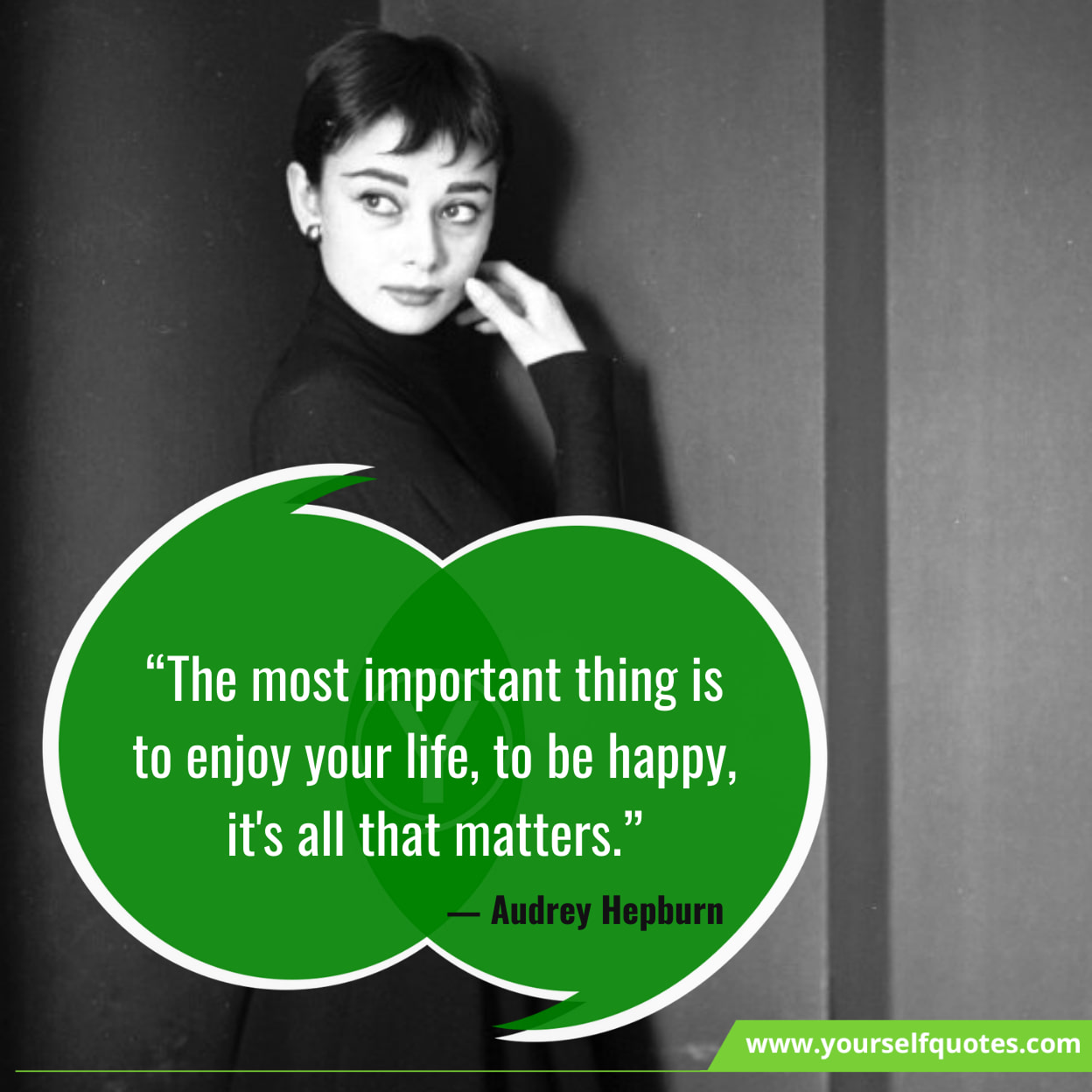 “Your heart just breaks, that’s all. But you can’t judge or point fingers. You just have to be lucky enough to find someone who appreciates you.” ― Audrey Hepburn

“You can tell more about a person by what he says about others than you can by what others say about him.” ― Audrey hepburn

“I’m an introvert… I love being by myself, love being outdoors, love taking a long walk with my dogs and looking at the trees, flowers, the sky.” ― Audrey Hepburn

“The beauty of a woman is not in a facial mole, but true beauty in a Woman is reflected in her soul. It is the caring that she lovingly gives, the passion that she knows.” ― Audrey Hepburn

“If I get married, I want to be very married.” ― Audrey Hepburn

“When you have nobody you can make a cup of tea for when nobody needs you, that’s when I think life is over.” ― Audrey Hepburn

“Pick the day. Enjoy it – to the hilt. The day as it comes. People as they come… The past, I think, has helped me appreciate the present, and I don’t want to spoil any of it by fretting about the future.” ― Audrey Hepburn

“Let’s face it, a nice creamy chocolate cake does a lot for a lot of people; it does for me.” ― Audrey Hepburn

“Living is like tearing through a museum. Not until later do you really start absorbing what you saw, thinking about it, looking it up in a book, and remembering – because you can’t take it in all at once.” ― Audrey Hepburn

“I believe, every day, you should have at least one exquisite moment.” ― Audrey Hepburn 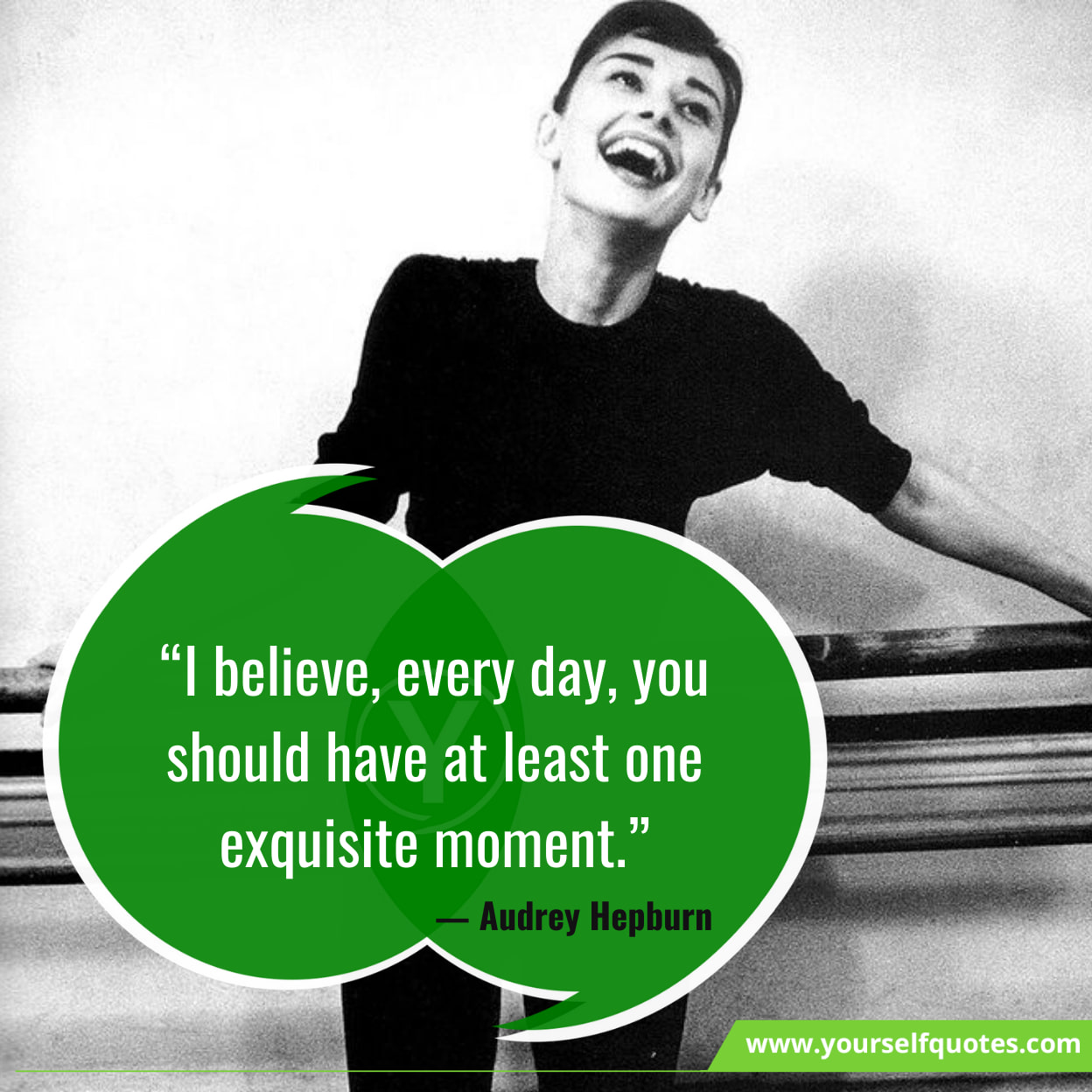 “I was born with an enormous need for affection, and a terrible need to give it.” ― Audrey Hepburn

“For beautiful eyes, look for the good in others; for beautiful lips, speak only words of kindness; and for poise, walk with the knowledge that you are never alone.”―

“The best thing to hold onto in life is each other.” ― Audrey Hepburn

“The most important thing is to enjoy your life, to be happy, it’s all that matters.” ― Audrey Hepburn

“True friends are families which you can select.” ― Audrey Hepburn

“Remember, if you ever need a helping hand, it’s at the end of your arm. As you get older, remember you have another hand: The first is to help yourself, the second is to help others.” ― Audrey Hepburn

“There are more important things than outward appearance. No amount of makeup can cover an ugly personality.” ― Audrey Hepburn

“Giving is living. If you stop wanting to give, there’s nothing more to live for.” ― Audrey Hepburn

“There are certain shades of limelight that can wreck a girl’s complexion.” ― Audrey Hepburn

“Make-up can only make you look pretty on the outside, but it doesn’t help if you’re ugly on the inside. Unless you eat the make-up.” ― Audrey Hepburn

“You can always tell what kind of person a man really thinks you are by the earrings he gives you.” ― Audrey Hepburn

“It’s that wonderful old-fashioned idea that others come first, and you come second. This was the whole ethic by which I was brought up. Others matter more than you do, so ‘don’t fuss, dear; get on with it.” ― Audrey Hepburn

“I decided, very early on, just to accept life unconditionally; I never expected it to do anything special for me, yet I seemed to accomplish far more than I had ever hoped. Most of the time it just happened to me without my ever seeking it.” ― Audrey Hepburn

“People, even more than things, have to be restored, renewed, revived, reclaimed, and redeemed; never throw out anyone.” ― Audrey Hepburn

“There is more to sex appeal than just measurements. I don’t need a bedroom to prove my womanliness. I can convey just as much sex appeal, picking apples off a tree or standing in the rain.” ― Audrey Hepburn

“People, even more than things, have to be restored, renewed, revived, reclaimed and redeemed. Never throw out anyone.” ― Audrey Hepburn

“I may not always be offered work, but I’ll always have my family.” ― Audrey Hepburn

“Makeup can only make you look pretty on the outside but it doesn’t help if you are ugly on the inside. Unless you eat the makeup.” ― Audrey Hepburn

“Anyone who does not believe in miracles is not a realist.” ― Audrey Hepburn

“I have learnt how to live…how to be in the world and of the world, and not just to stand aside and watch.” ― Audrey Hepburn 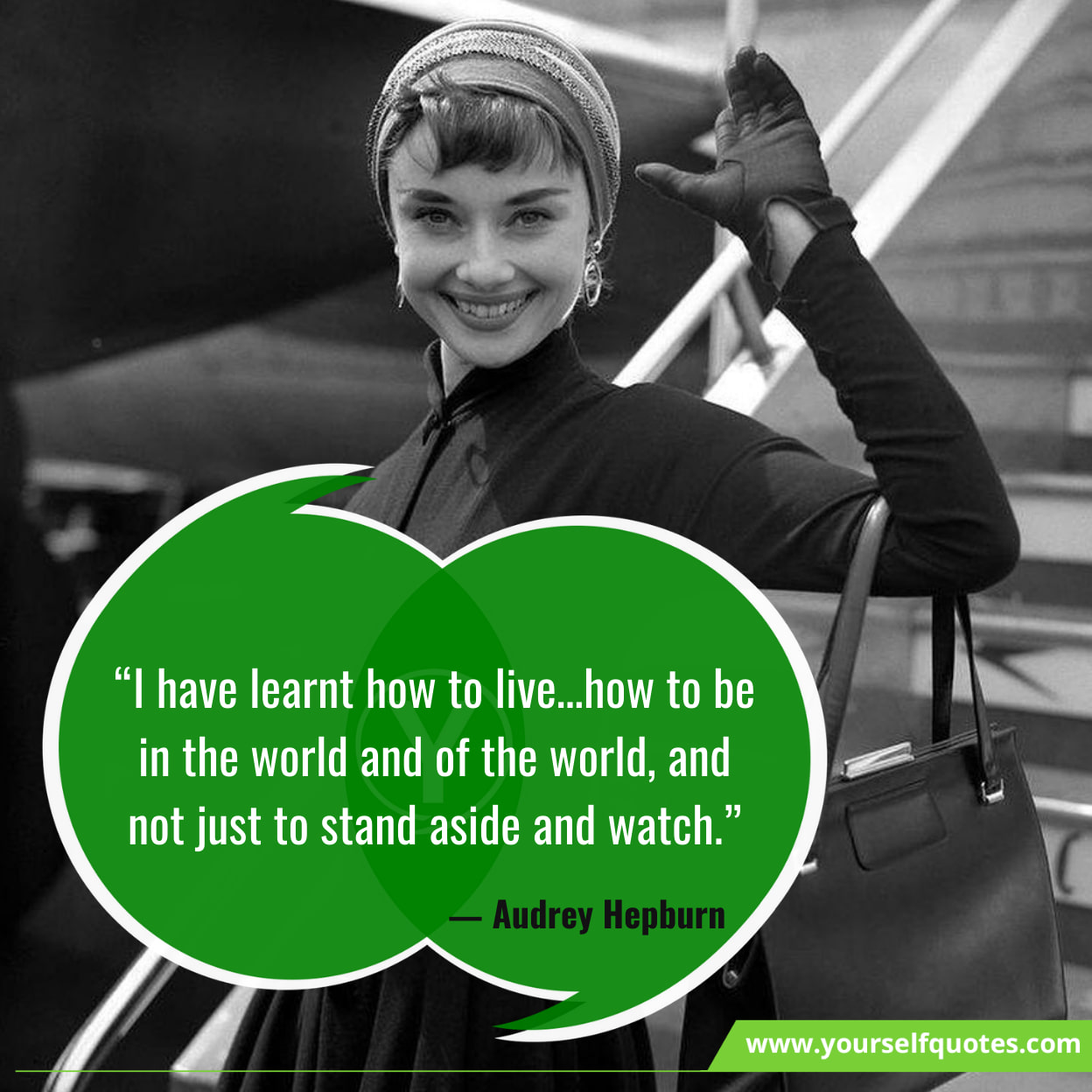 Hepburn died in her sleep at home in Tolochenaz, Vaud, Switzerland, on January 20, 1993.

You may recognize her from the film Breakfast at Tiffany’s. You might know her as one of history’s greatest icons. What makes Audrey Hepburn a legend, however?

Which are your favorite Audrey Hepburn Quotes? Leave a comment below.