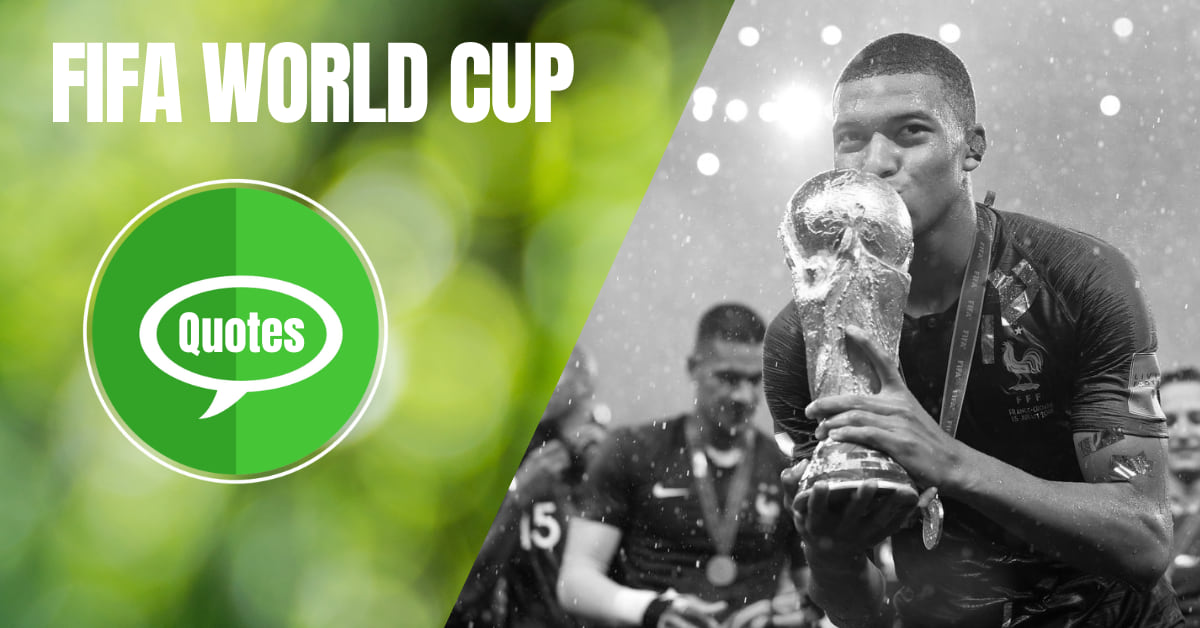 FIFA World Cup Quotes are the most encouraging words to share with those who are hard-core fans of Football!

The World Cup is going to begin in Qatar. We’ve compiled a list of quotes about how to keep the best football craze alive among football enthusiasts all across the world. In addition to football’s team-game enthusiasm, our quotes examine how spirit operates behind the scenes as a joy booster for such a great event.

There aren’t enough words to describe the FIFA World Cup, which is by far the largest sporting competition in the world, uniting people from all walks of life every four years. Although explaining the magnitude of the World Cup is a mammoth effort, a few great players have eloquently captured the tournament’s fervor with their outstanding statements.

As good as club football is, there’s no denying that seeing nations come together in support of their side makes the FIFA World Cup the greatest spectacle on earth.

Here are some of the most memorable quotes regarding the most important event in the history of the beautiful game.

Share these Fantastic FIFA World Cup Quotes 2022 with True Love for Sportive Athleticism to be hooked on the ultimate thrill.

“The World Cup is a very important way to measure the good players and the great ones. It is a test of a great player.” — Pele 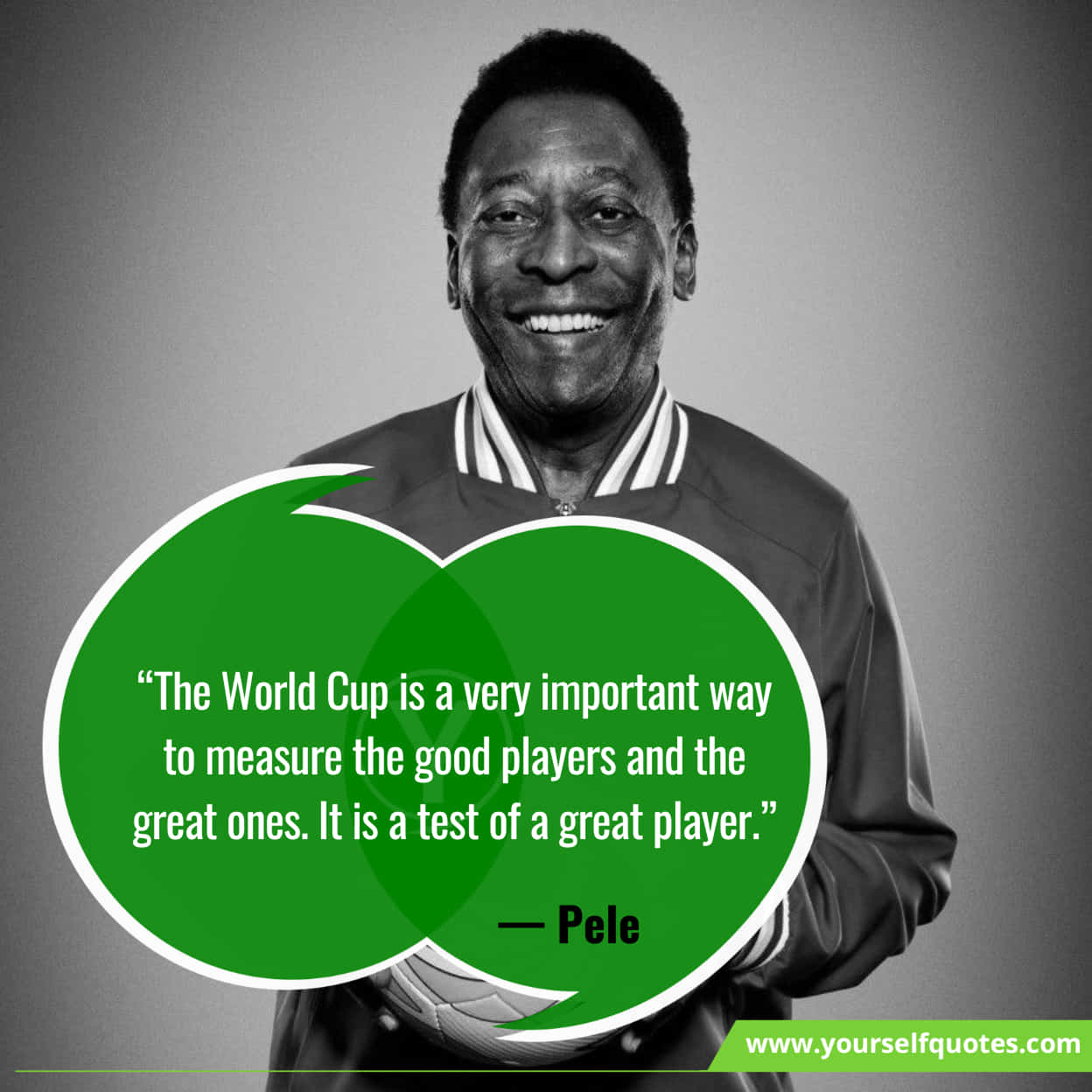 “I’m sure sex wouldn’t be as rewarding as winning the World Cup. It’s not that good, but the World Cup is every four years and sex is not.” — Cristiano Ronaldo

“As a kid growing up in the back streets of Dublin I used to pretend I was playing in the World Cup with my mates out on the streets, and now I will be doing it for real.” — Robbie Keane

“Nobody wants to be associated with failing to qualify for the World Cup finals. I cannot imagine the shame of it.” — Rio Ferdinand

“You know as a player that you won’t have many opportunities to play in World Cups – so you have to take them when you can.” — Lionel Messi

“The World Cup was a huge frustration because I had prepared really hard for it. But in the World Cup, there is no formula, no recipe for success.” 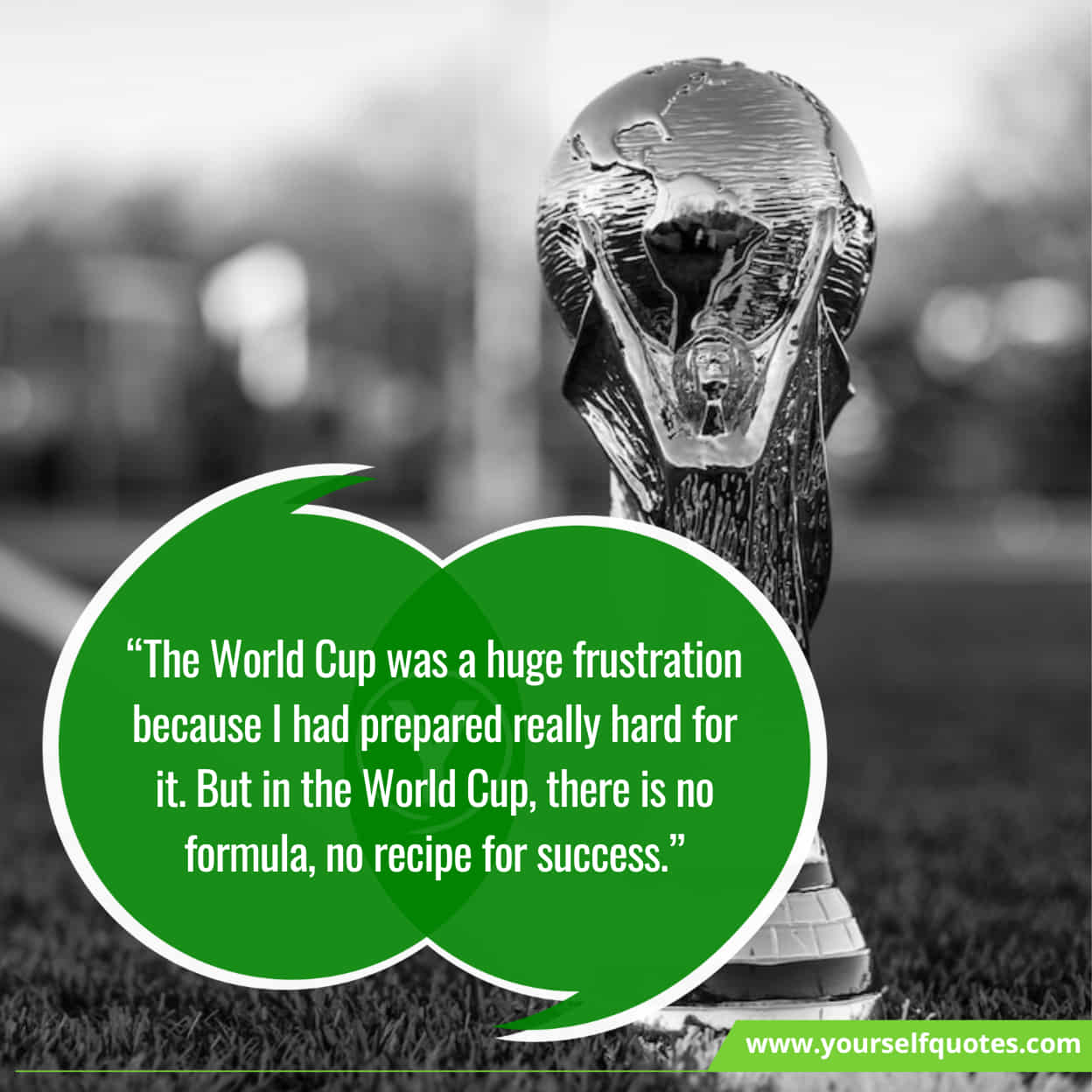 “This is the first time Denmark has ever reached the World Cup finals, so this is the most significant moment in Danish history.” — John Helm

“If a FIFA World Cup tournament had been held every year between 1982 and 1986, France would have won two or three.” — Michel Patini

“One thing is for sure, a World Cup without me is nothing to watch so it is not worthwhile to wait for the World Cup.” — Zlatan Ibrahimovic

“I will never forget my first game for England at the World Cup, It was against Turkey… no I mean Tunisia.” — David Seaman

“The boy can do anything, but to be the star of the World Cup you have got to get to the final and win it!” — Alan Hansen 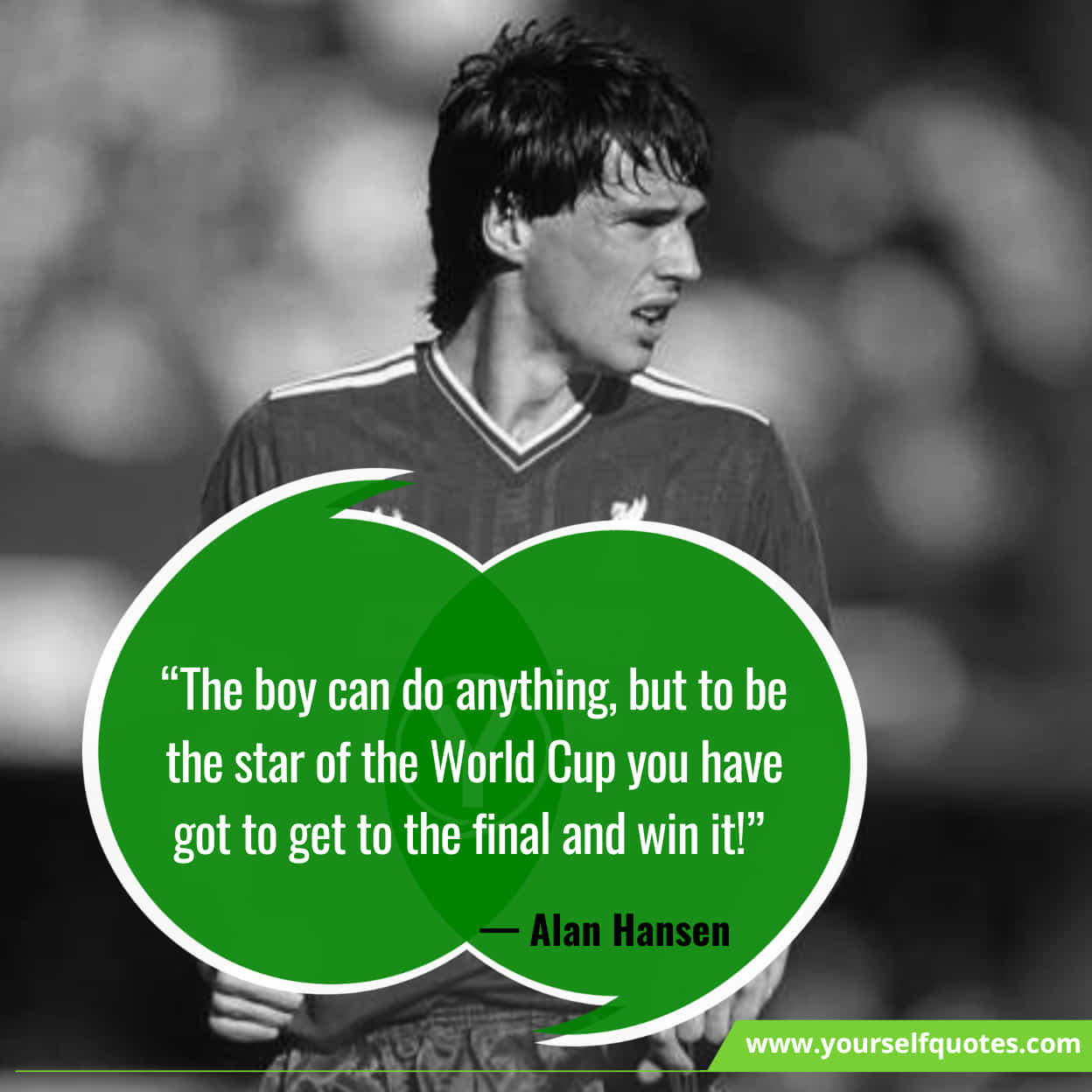 “I wasn’t as fit as I would have liked to have been, going to the World Cup, but I’m not sure what difference that made.” — David Beckham 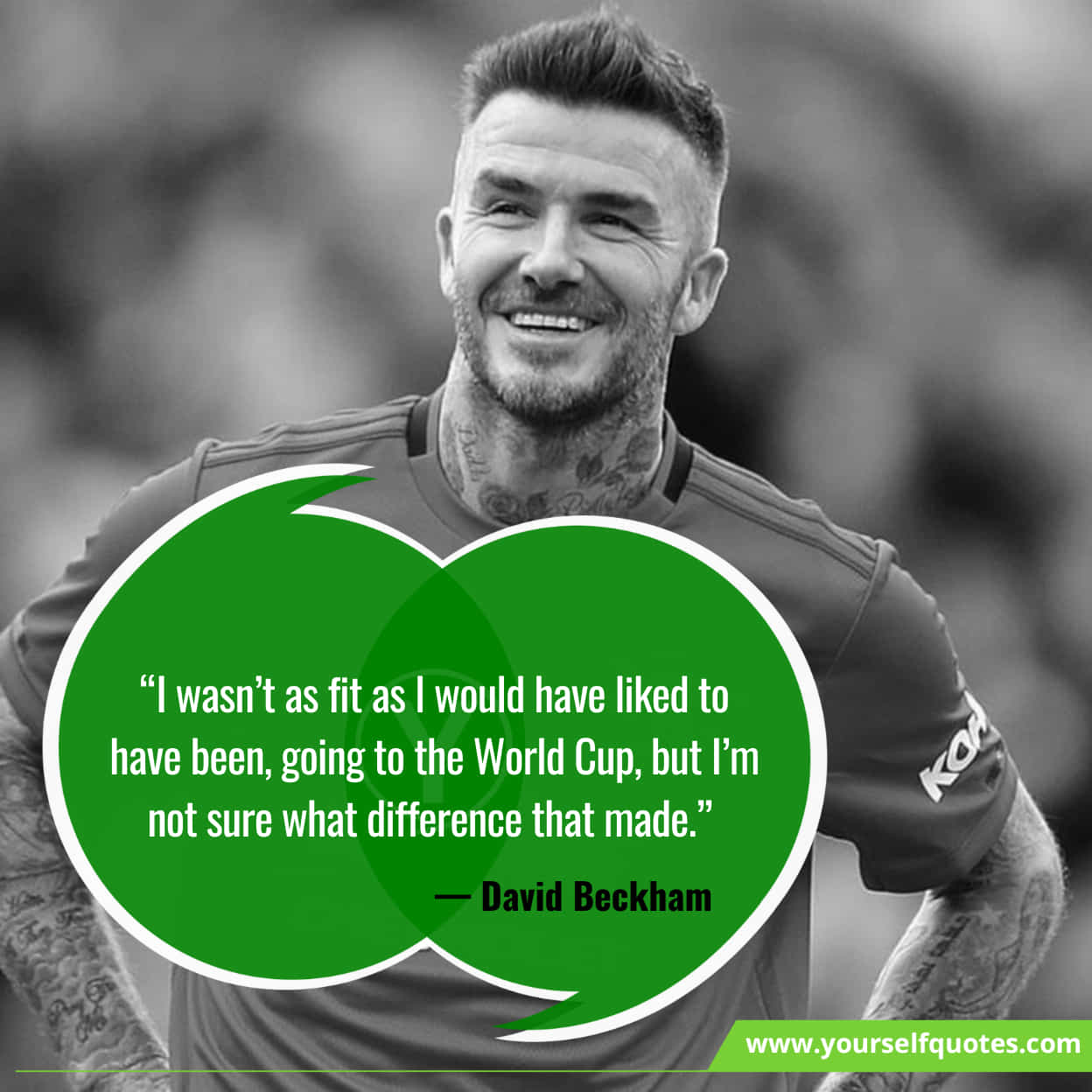 “We must support the World cup irrespective of Region as well as Religion ahead of our keenness for the passion towards football.”

“For an upright aim to uphold the most attractive battle game like a football inside the Middle Eastern belt, you ought to welcome Qatar 2022 FIFA World Cup.”

“Football World Cup has the magic of bringing peace where it goes and the Middle East could benefit from FIFA’S Football diplomacy.”

“Football World Cup Qatar 2022 will expectably bring football to the Middle East and propagate the stunning game spirit to a never-before region of the planet.”

“Football is the only sport which makes everyone united and intact, Football sensation let you forget all past depression- it’s the magic of football.”

“FIFA world cup is the extreme-level spirited football journey. If u don’t watch it – you should stop watching football.” 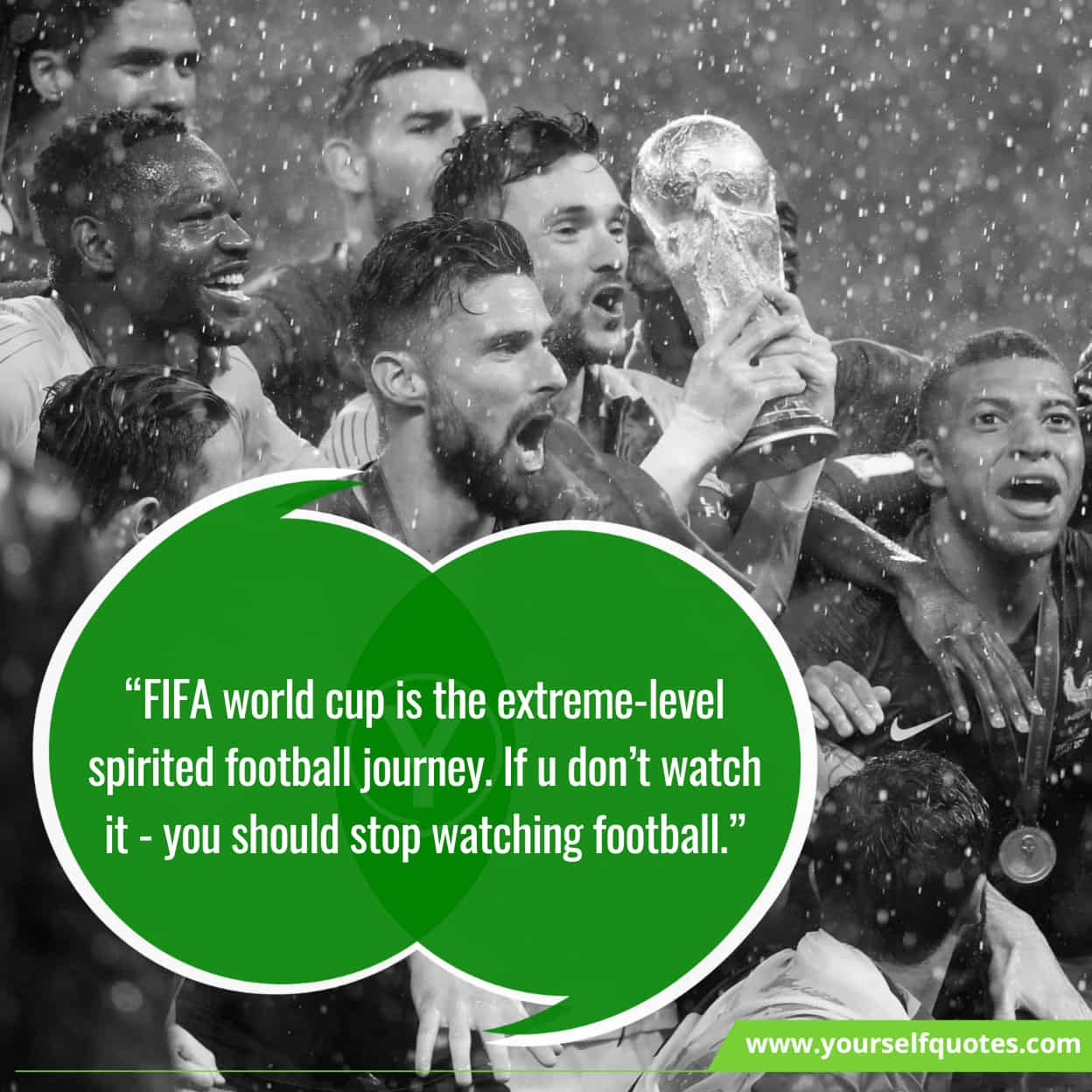 “Football is the only sport where there’s no racism- only there we learn to respect its sportive nature. 2022 FIFA world cup is, thus, the show where we will learn loyalty through sports.”

“Football is the only sport that all love- child to old. Football world cup rocks every time, everywhere.”

“FIFA world cup is about to spread the emotion that u need to quench your thirst for football to the maximum extent.”

“Football is not just a game. It is true love for eye-to-eye combat for the last smile.”

“It is always a team struggle where allowance and allocation of strategies must be dead-on to beat the opponent. Await FIFA world cup 2022 to weigh the truth.”

“We must crave so that Perseverance and athleticism of the next football world cup 2022 reaches a whole new level.”

“Respect the sort of self-will and team leading skills of every team for ensuing football world cup 2022.”

“Football world cup is just ahead, be ready for the ultimate team game event with your favourite players and team.”

“Witness the coming FIFA world cup perfect mix of super-sportive strategy and physicality of every match.” 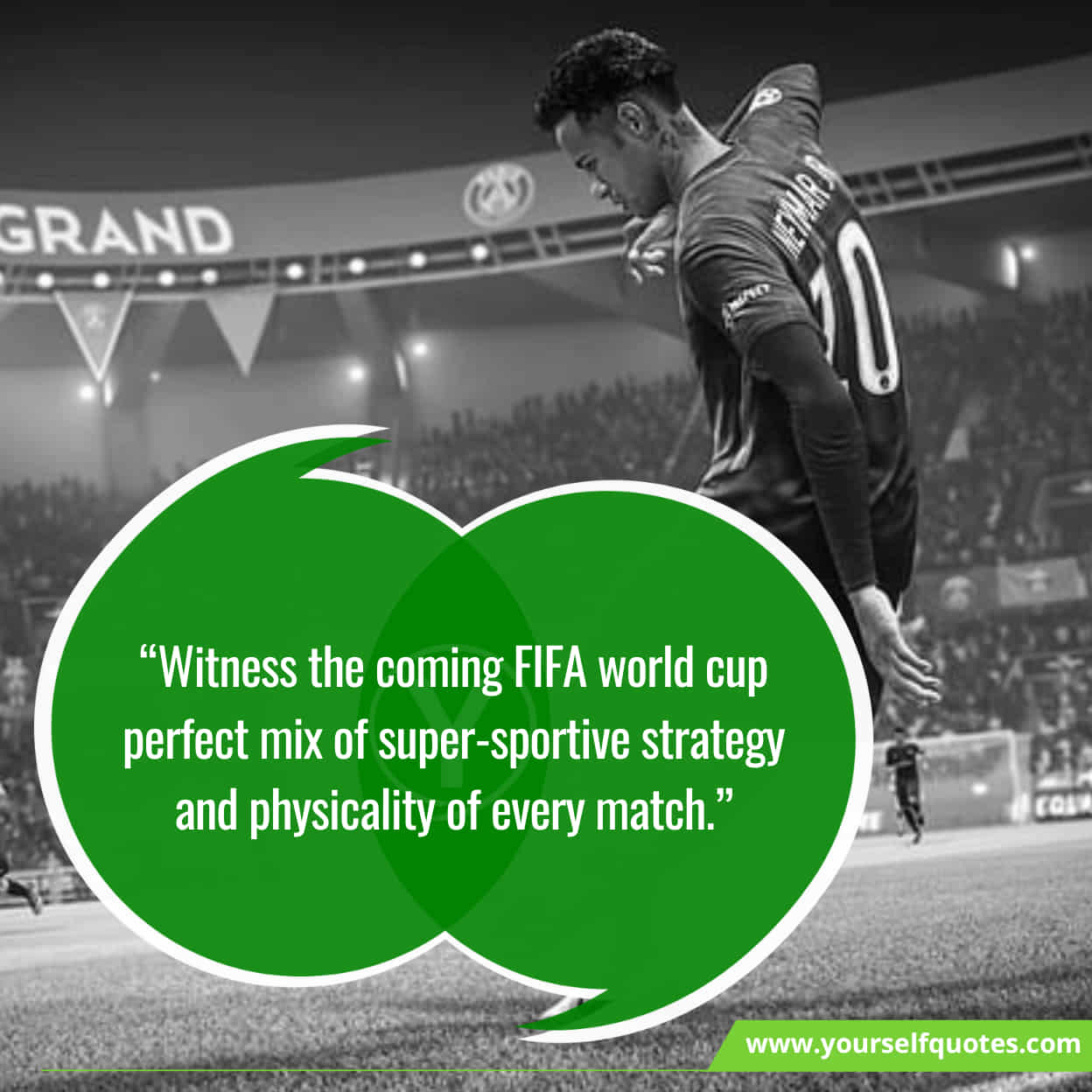 “It is fun, competitive, educational, and intriguing. It is as fun to watch as it is to play. Football world cup always gifts us that chance to enjoy.”

“FIFA WC is the best sports event to watch because it’s fast-paced during the action, but then there are breaks for you to wait. No other game can be like that!”

“Come rain or come shine – and it’s hot or it’s cold – to play or even watch the greatest team sport in the world is a matter of luck.”

“Everything of this sport event means to me, it will never bore me or anything! Football matters for our inner entertainment. Football is the spirit of life!”

“Football is best for its harmony and union, the power and prowess, and the toughest nerve strength for this sport to win and enjoy.”

“Watching football world cup 2022 makes all realize how much we love the fun of football.”

“You can’t describe the feeling of the football world cup at ease. Week in and week out you must watch. It’s most likely to be a drug.”

“For most of all, football has never been a depressant, but actually it’s been a stimulant! Love to watch the next world cup 2022.”

“Football is the universe- all colors, all creeds. All are brought together in their strive for excellence for 2022 football world cup matches.”

“Football FIFA world cup brings people together from all walks of life. It mirrors the fight of life.” 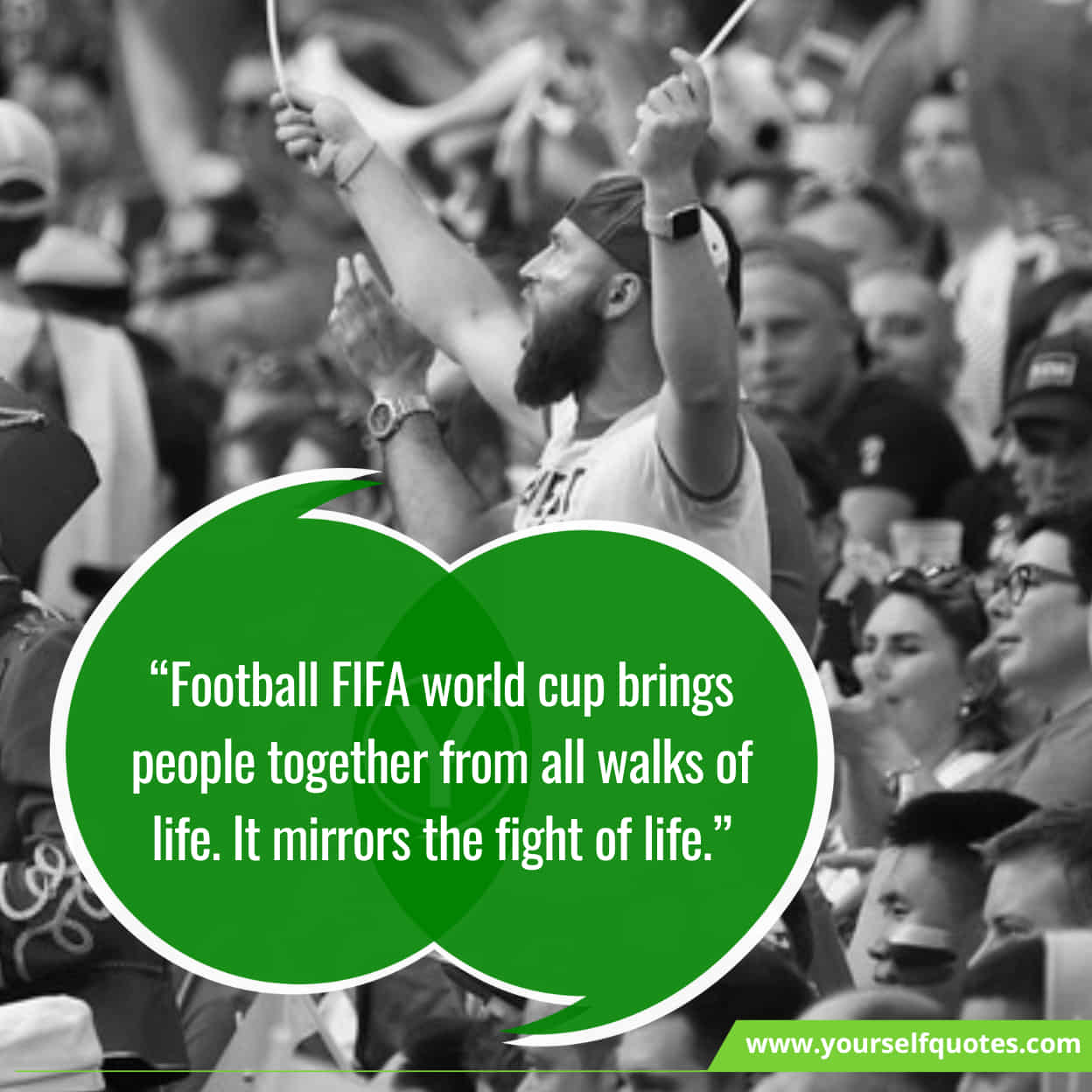 “Football world cup is a matter of having people look at all fans to let them gain confidence. If your football be in control, they’re in control.”

“Football is a game of magnificence. It’s truly the greatest game ever designed. world cup matches prove that.”

“Comes once every four years. So, there’s not much more time to waste. Long live Football World Cup.”

“It’s a magic game of uncertainty. Anything can come about in the latter minute. This makes football more than just a game.”

“Not only the greatest show on earth but also like a battle, packed up with speedier action with intelligent tactics.”

“Football always gives us unforgettable treasured memories. This football world cup 2022 will hopefully be no exception to that.”

“Football appeals to me as it is not about wanting to win. It is more about enjoying the moment and getting to know people.”

“Football world cup seems to be one of those competitions where no single player can dominate.”

“Football gives you a new family and even a feeling unlike anything else you’ve ever experienced. As a wise man once remarked.”

“Football makes us so emotional. Football unites our global family. FIFA world cup is, thus, family to me.” 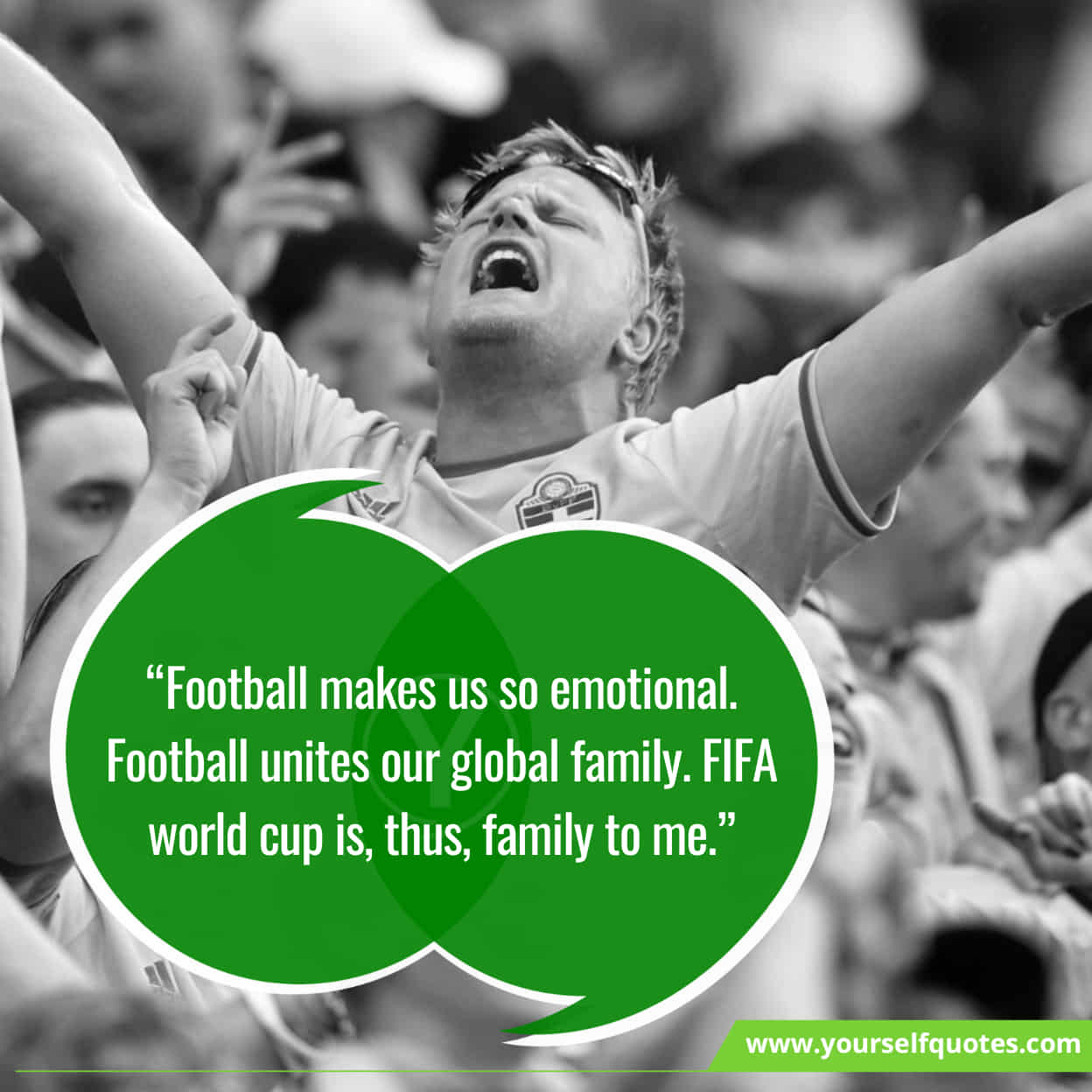 “Football is entertaining to watch and requires nothing in the way of gear or technology to play.”

“This football world cup 2022 will be the best of the year for newer reasons of pure fun coupled with sociability.”

“Football involves a group of individuals joining together and each contributing their best effort to a goal much larger than themselves.”

“This football world cup, has so many levels, from easy to advance with utmost uncertainty. It’s really the game of the game.”

“No team is intended to be incredibly consistent, the competition, at it, gets so funny and interesting with full of twists and turns.”

“Success is not winning the World Cup. It may be a goal in your mind but success is having a team that is improving all the time.” 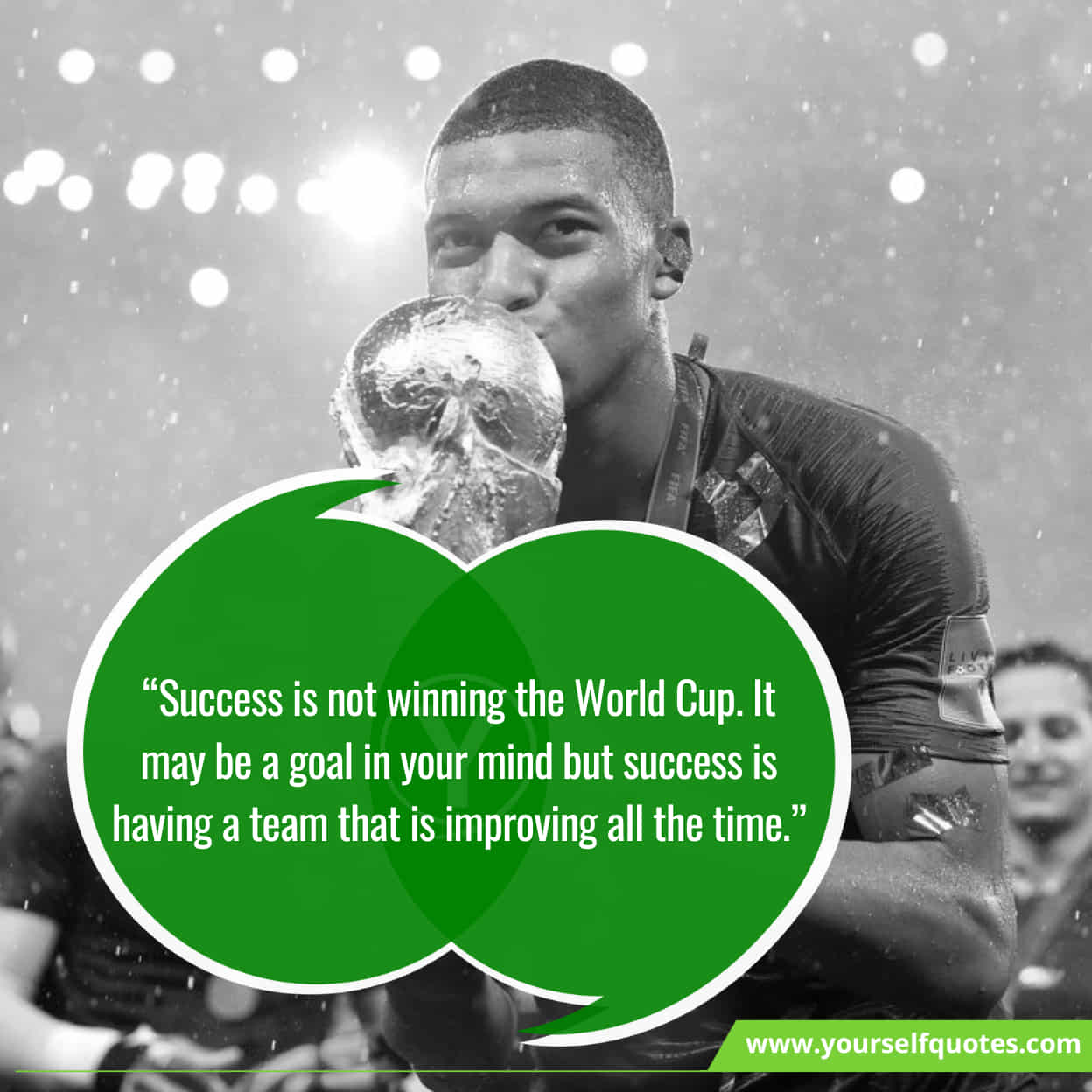 “Winning the World Cup is something that will always be inside your mind and inside your body.” 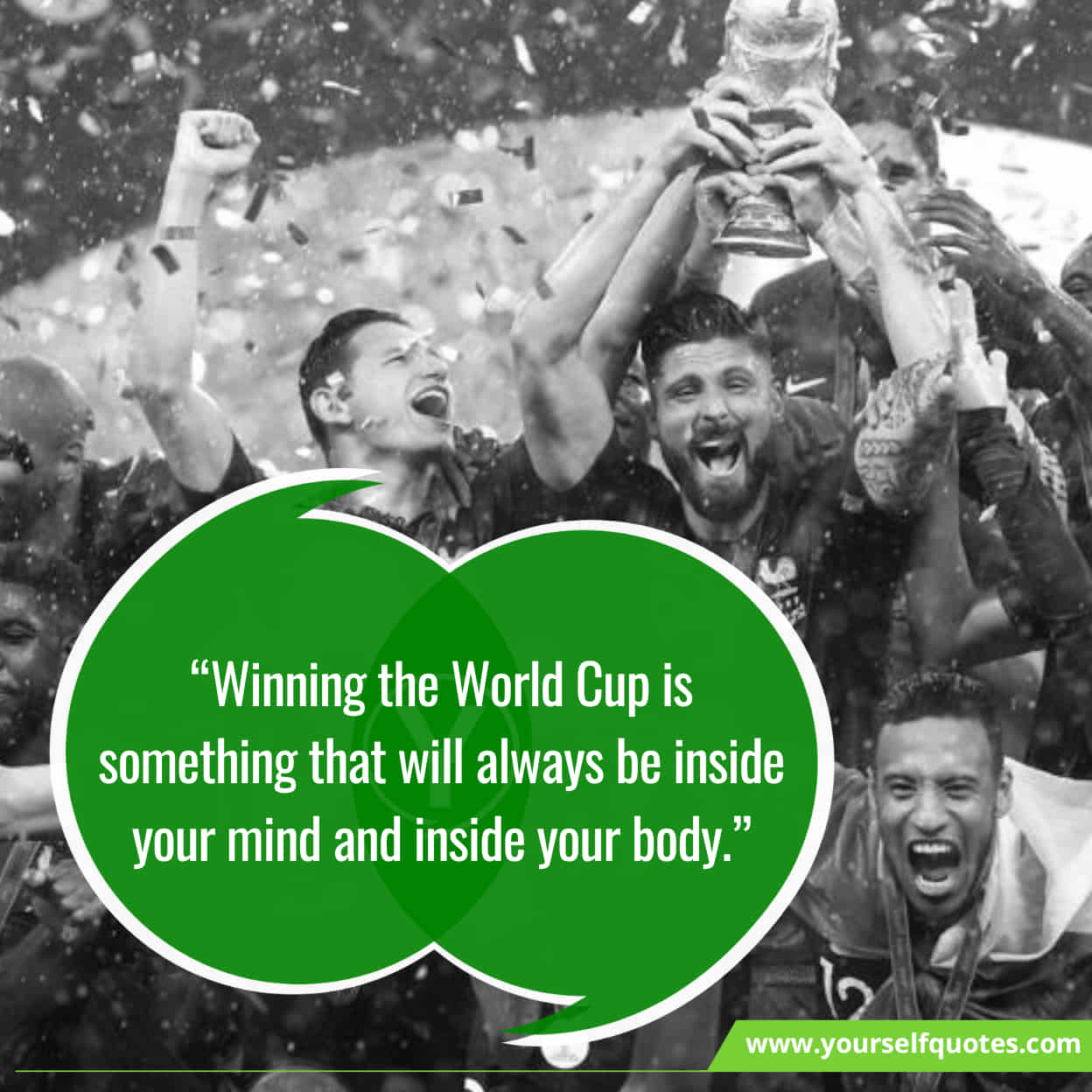 Get ready for the 2022 World Cup in Qatar by reading some of the best World Cup quotes from famous footballers, coaches, and soccer gurus. Quotes from Diego Maradona, Roy Keane, and Sir Alf Ramsey are included, as is Bjorg Lillelien’s famous football World Cup rant on Norwegian radio.

Football is a worldwide phenomenon, and for many people, it is a ray of hope that shines brightly on the horizon. The following collection of motivational soccer quotes is intended to provide a healthy dose of motivation to those in need.

Share these exciting FIFA World Cup Quotes with your network and make them ready for the show!

Which are your favorite FIFA World Cup Quotes? Leave a comment below.

Small Business Quotes to Motivate and Inspire Your Business

Never Give Up Messages and Inspirational Quotes