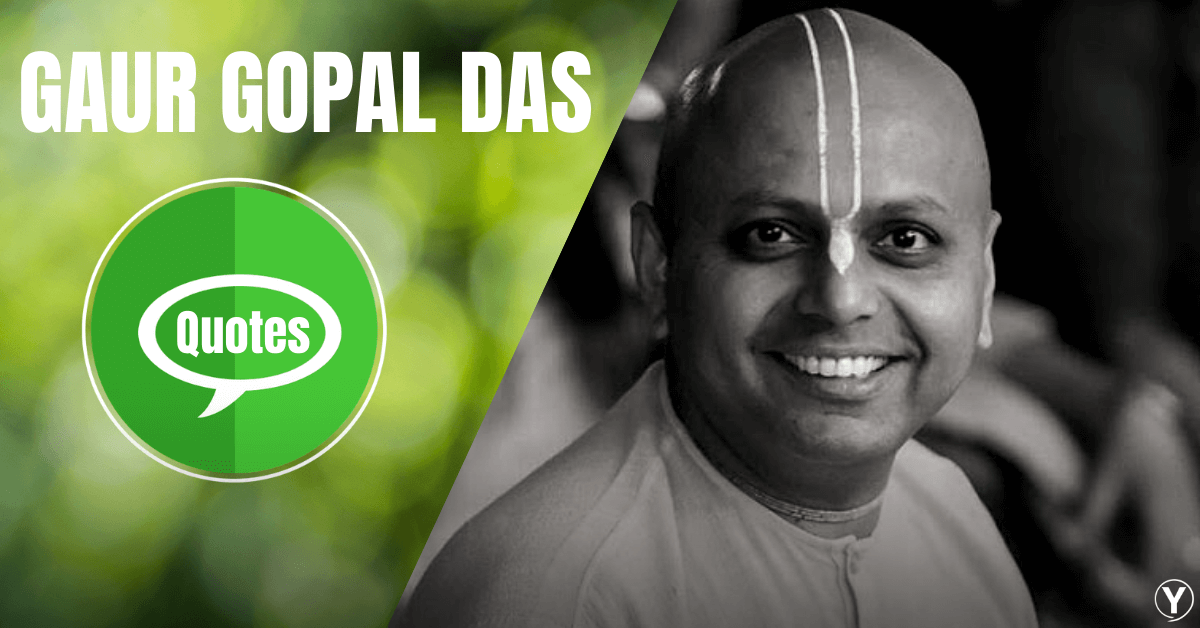 A man of spirituality, a monk with the wisdom of motivational words & a true lifestyle coach is none other than Gaur Gopal Das. He beholds a personality & charisma in his speech that will always ignite you to think out of the box. His extrinsic motivational skills are well known in society. Today he is known as an inspirational speaker on an international platform as well.

Gaur Gopal Das, a spiritual & religious leader was born on 24th December 1973 in the land of Maharashtra. He completed his studies in electrical engineering. And then worked in the corporate sector, but the job didn’t satisfy him. So he decided to give away all worldly pleasures & chose the path of Spirituality & self-confidence. Since 1996, he has been serving as a monk & is an active member of the International Society for Krishna Consciousness (ISKON).

“I Shall Leave the World a Better Place, Then it was When I entered it.”

He is well known for his motivational speeches & spiritual lectures globally. And today is the day when he has become a role model for millions of people worldwide. The above-mentioned words are a well-established & famous quote by the Spiritual leader, Gaur Gopal Das.

You can find more of such quotes to be well aware of life & get motivated by his wordings. 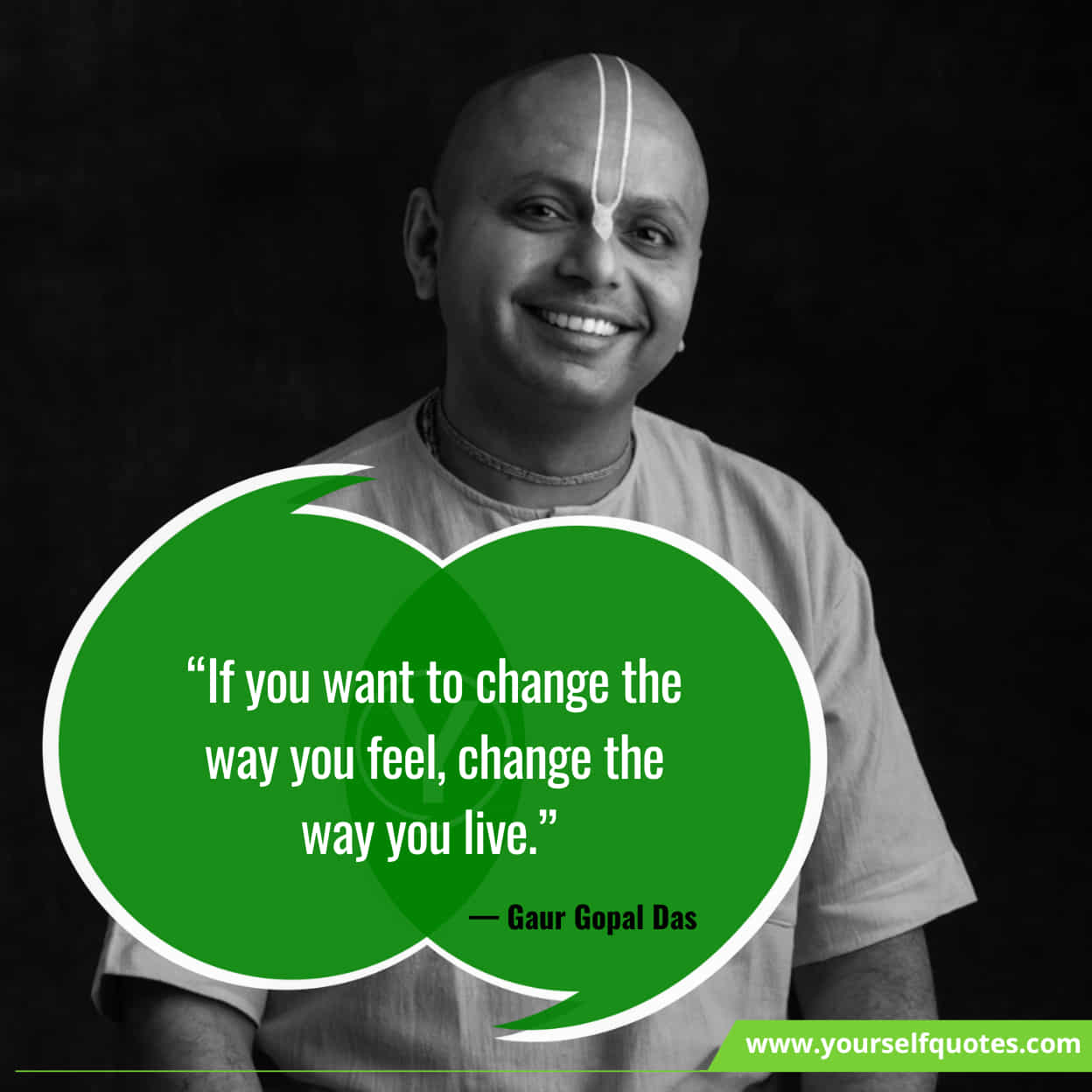 “Pain is an integral part of life. It is up to you to decide what to choose, pain that hurts but heals or something that is pleasurable in the beginning and extremely painful thereafter.”  – Gaur Gopal Das

“It is strange that sword and words have the same letters. Even more strange is that they have the same effect if not handled properly.” – Gaur Gopal Das

“It’s all too easy to focus on external achievements and forget to assess whether we are happy with the state of our life.” – Gaur Gopal Das

“It’s easy to make a buck, but hard to make a difference.” – Gaur Gopal Das

“One who genuinely regrets

a mistake not only feels bad about it but is also willing to accept it’s a consequence and work hard to rectify it.” – Gaur Gopal Das

“Whenever there is a ’setback’ just ‘sit back and try to see the silver lining around the cloud.” – Gaur Gopal Das

“Do you know what oxymoron is? Words like pretty ugly, happily married. Well, business ethics is an oxymoron.” – Gaur Gopal Das

“We have to move people from HRM to HAM (Human Asset Management). We have to treat people as assets and motivate them beyond just earning money.”  – Gaur Gopal Das 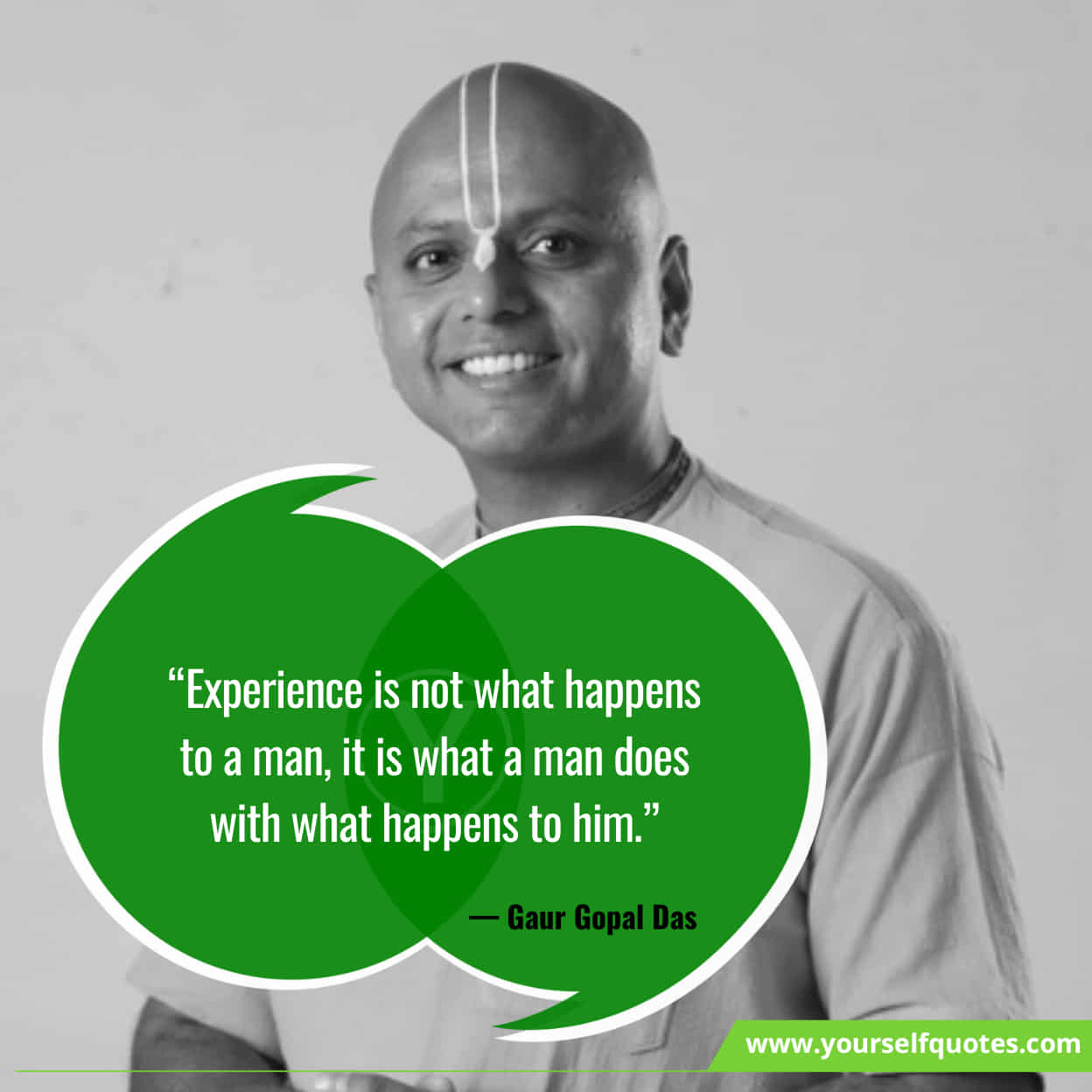 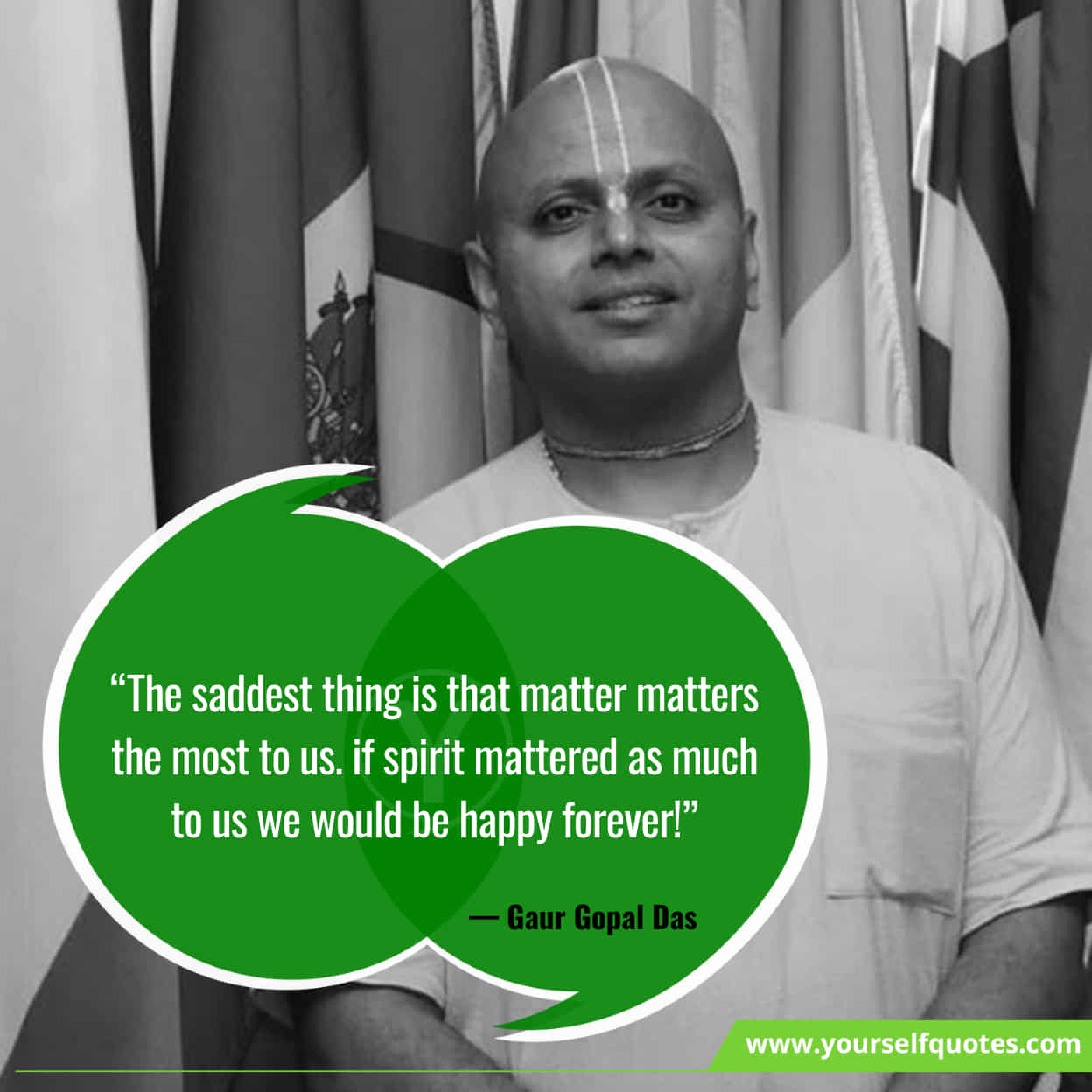 “Self-discipline is about taking charge of your mind and directing it to act in the best interest of yourself.” – Gaur Gopal Das 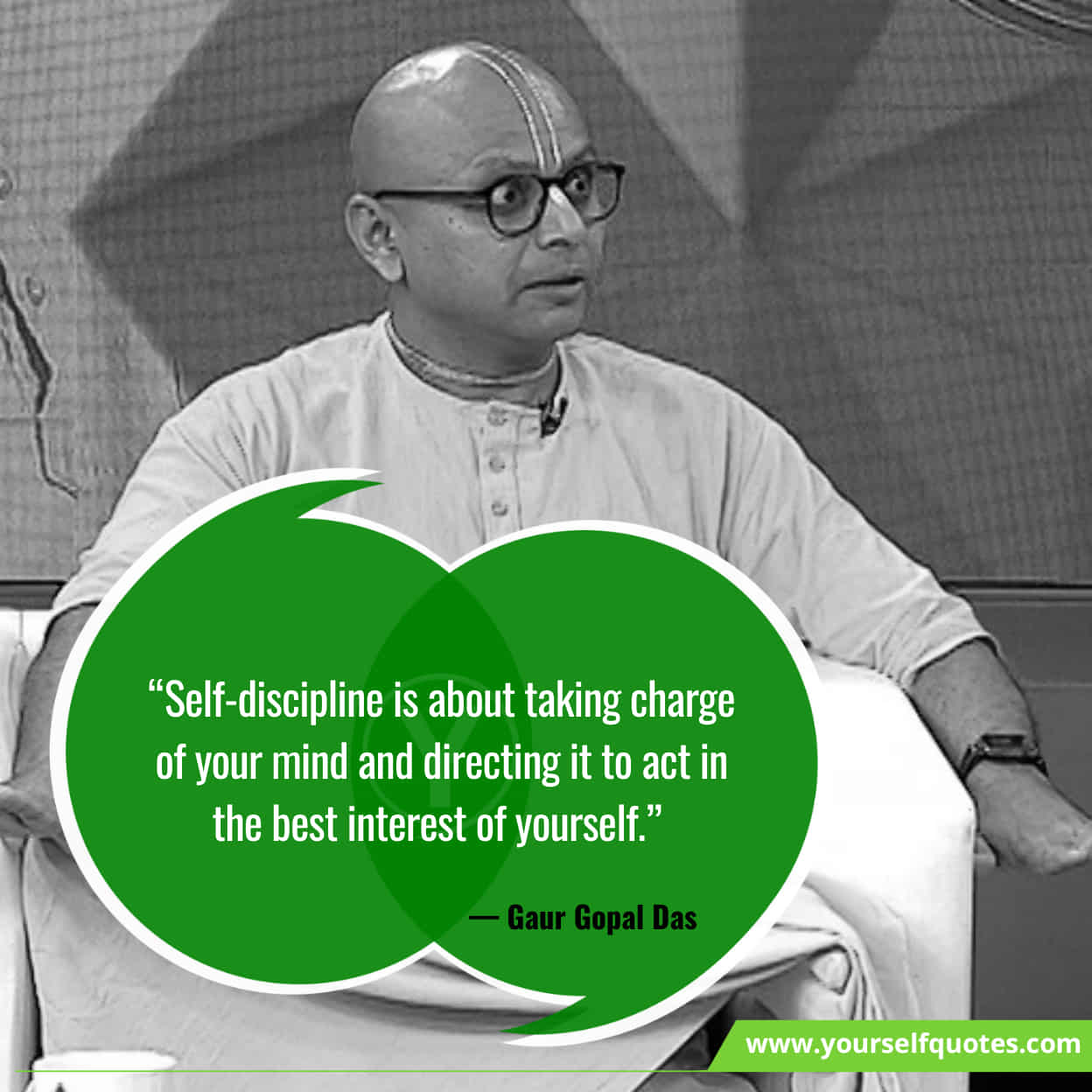 “Gucci suits won’t bring you satisfaction till you bring a smile on someone’s face. The good wishes of the person can do more for you.” – Gaur Gopal Das

“A good leader is one who is a good follower of another good leader.”  – Gaur Gopal Das

“Everyone experiences anxiety but they taste different flavours of it.” – Gaur Gopal Das

“Values aren’t taught by what we say, they are taught by our example.” – Gaur Gopal Das

“To move on and accept change is the sign of wisdom and maturity.” – Gaur Gopal Das

“Earning with integrity, spending with compassion is conscious capitalism. It will add value to your valuables. When you will find that purpose you will love your work otherwise work can be a drag.” – Gaur Gopal Das 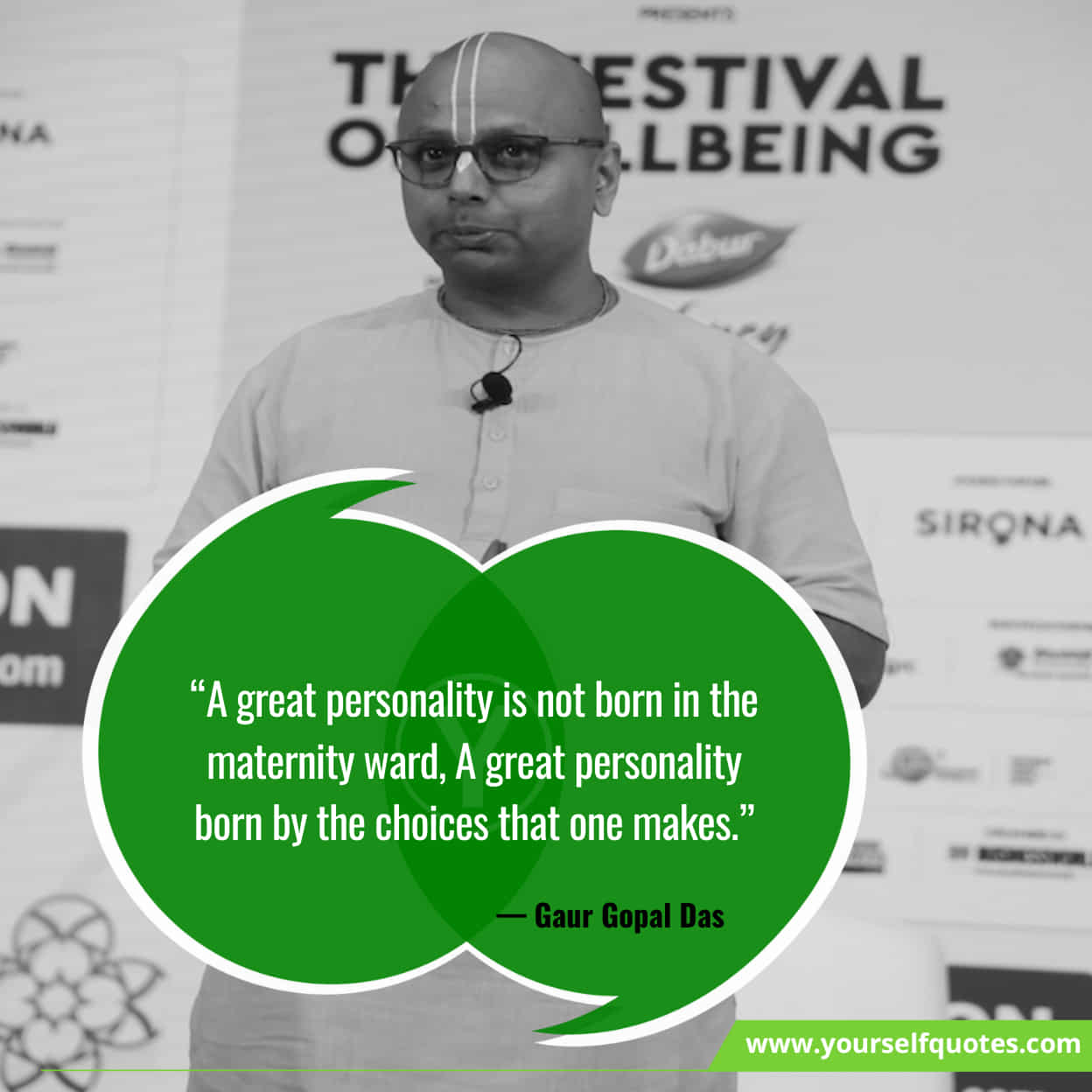 “Happiness seems like a butterfly. Oh! So close, but eluding us when we try to grab it.”  – Gaur Gopal Das 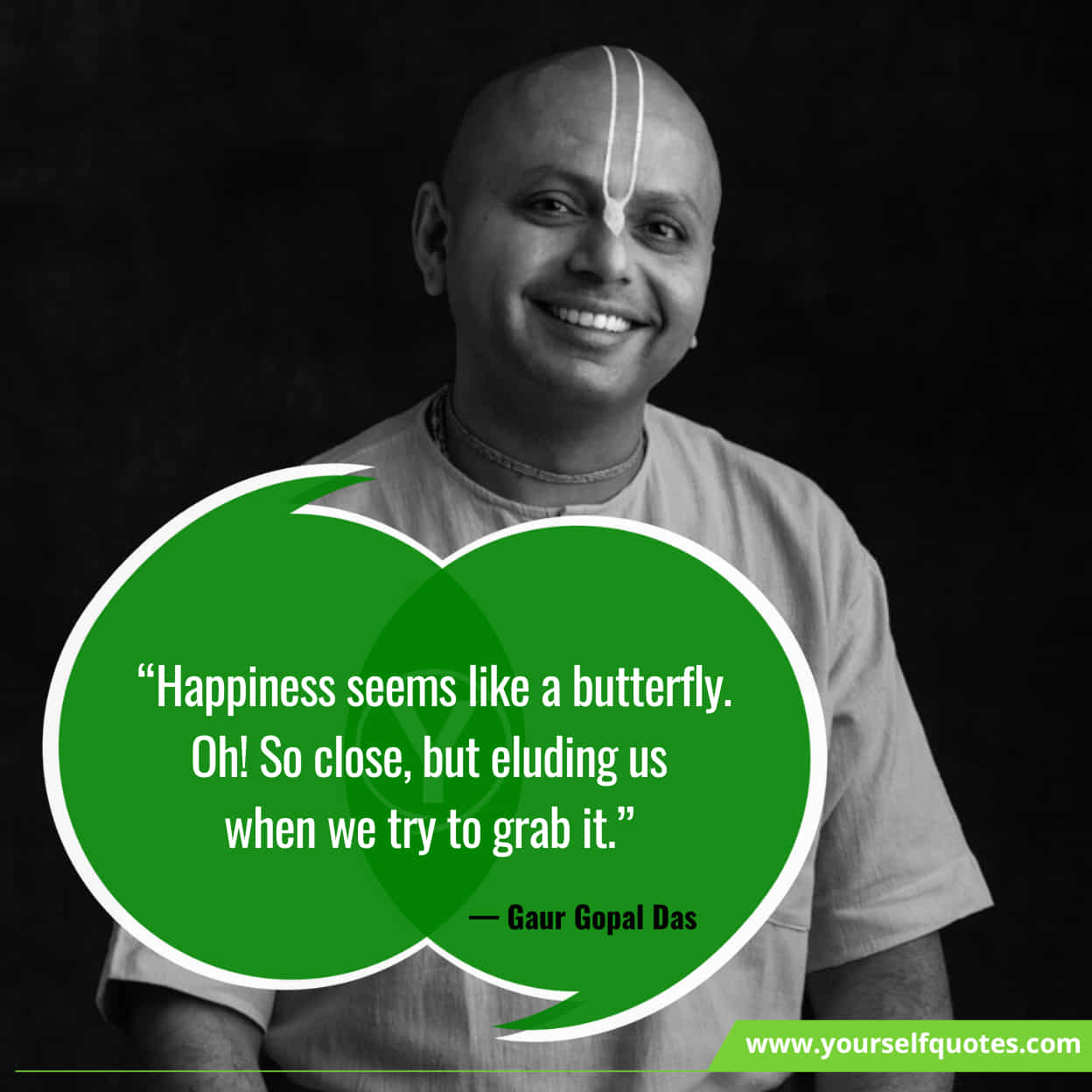 “Speaking less and doing more, It is the art of Daring, Caring & Sharing.”  – Gaur Gopal Das

“Happiness is a Journey, not a destination.”  – Gaur Gopal Das

“When things are beyond your control and there is nothing you can do, why worry.”  – Gaur Gopal Das

“We must find positivity in the bleakest situations and live by the principle of gratitude.”  – Gaur Gopal Das

“A gentle answer turns away wrath, but a harsh word stirs up anger.”  – Gaur Gopal Das

“The paradox of our times is that those who have the most can often be the least satisfied.”  – Gaur Gopal Das

“We need to become role models for the next generation.”  – Gaur Gopal Das

“Self Discipline is about taking charge of your mind & directing it to act in the best interest of yourself.”  – Gaur Gopal Das

“Worry never robs tomorrow of its sorrow, it only saps today of its joy.”  – Gaur Gopal Das 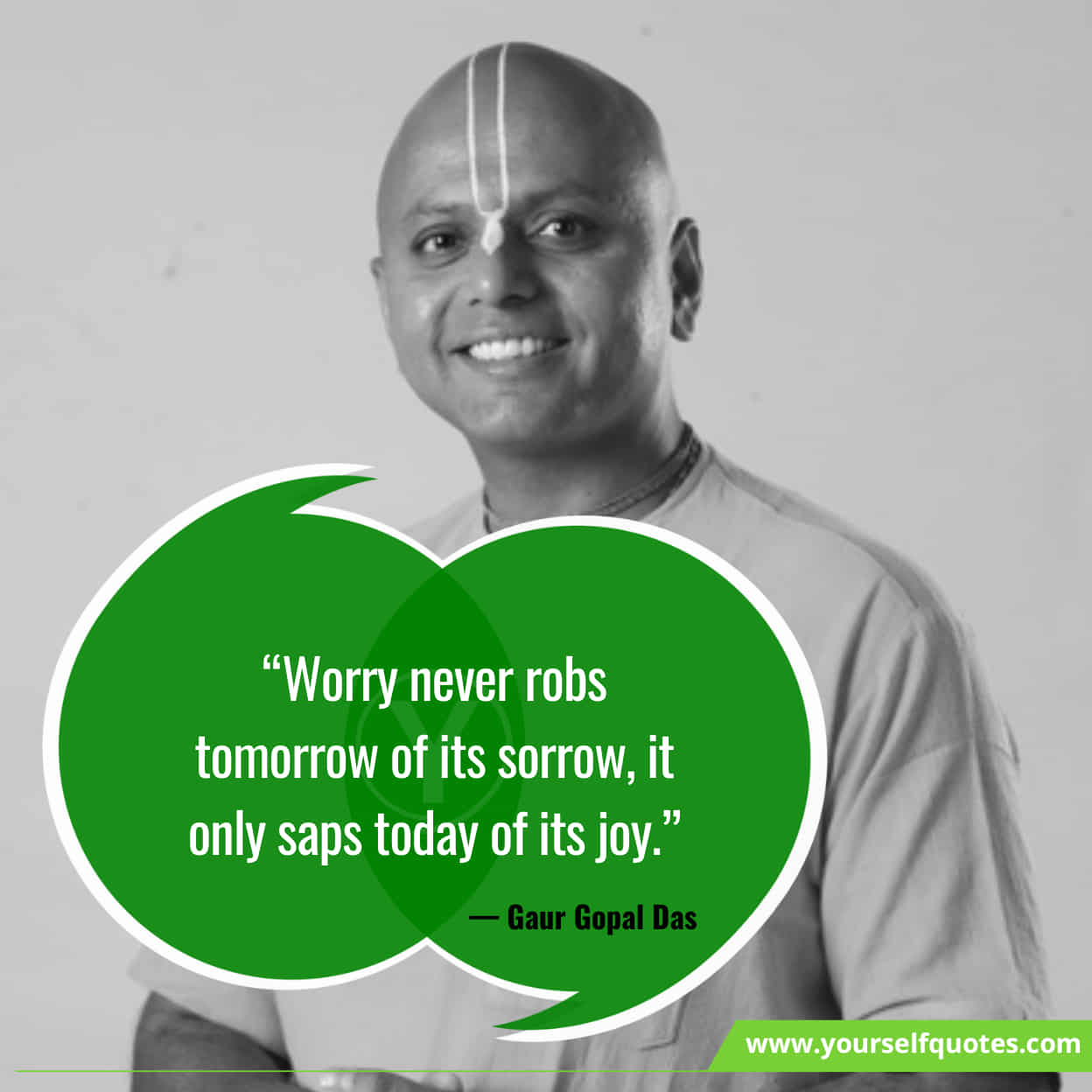 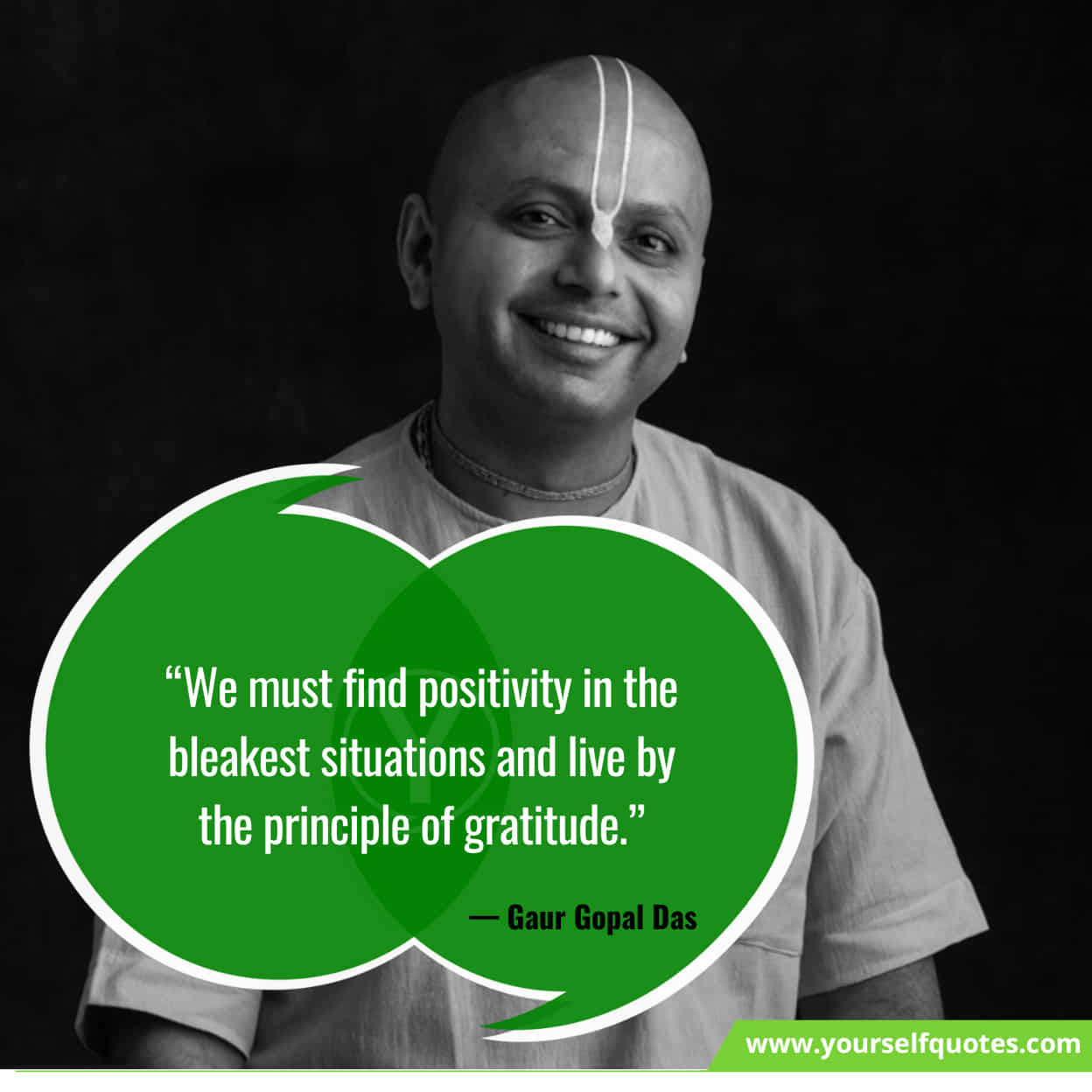 Who is Gaur Gopal Das? Gaur Gopal Das nowadays has become an internet sensation because of his spiritual & motivational speeches & wordings. A man with golden motivational words of wisdom & a spiritual outlook is known for his influencing knowledge towards matters related to life.

We can choose a path of wisdom with these Words of Leader Gaur Gopal Das by sharing his enchanting quotes with the ones we care about. These wisdom quotes will make us think beyond our minds and will take us to new horizons of life.

So share these Quotes by Gaur Gopal Das with your family & friends only from YourselfQuotes.com

Which are your favorite Gaur Gopal Das Quotes? Leave a comment below.

Mac Miller Quotes to Make You Fall in Love with Music