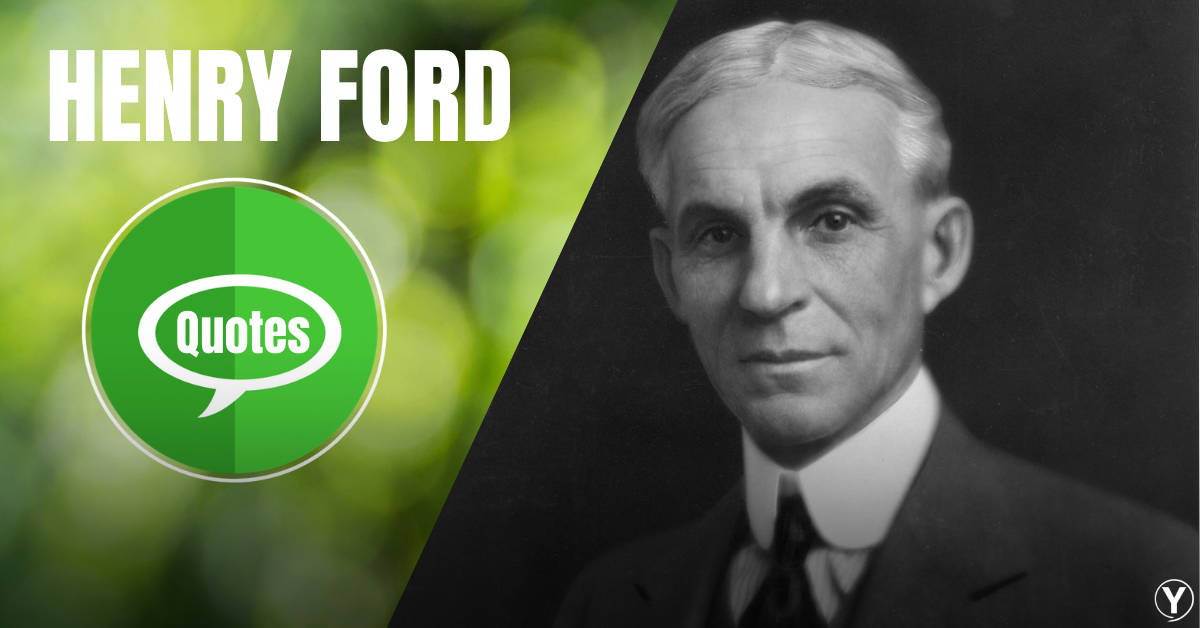 Henry Ford was an American industrialist who with his assembly-line techniques revolutionized factory production. He was a corporate magnate who had been a successful Ford Motor Company founder.

Ford was doing headlines for most of his life, good, bad, but never indifferent. Celebrated as both a technological genius and a folk hero, Ford was the creative force behind an industry of unprecedented size and wealth that changed the economic and social character of the United States permanently in only a few decades.

By creating the first automobile that middle-class Americans could buy, he turned the vehicle from an exotic novelty into affordable transportation that had a significant effect on the 20th-century landscape. The launch of the Model T Automotive revolutionized American manufacturing and transportation. He was one of the wealthiest and best-known men in the world as the owner of the Ford Motor Corporation.

He gets credit with “Fordism”: mass manufacturing of cheap goods combined with high wages for workers. Ford’s dream was worldwide, with consumerism as the path to prosperity.

His deep contribution to systemic cost-cutting culminated in several technological and market advancements, including a franchise network that brings dealerships across North America and big cities in six continents. Ford left most of his vast wealth to the Ford Foundation and arranged permanent control of it for his family.

Through his newspaper The Dearborn Independent and the book The International Jew, Ford was also widely known for his pacifism during the first years of World War I and for promoting antisemitic content, including The Protocols of the Elders of Zion, allegedly influencing the development of Nazism.

Henry was indeed a great personality who is responsible for bringing such a technological reform. So let’s check out the most prestigious words from him the famous Henry Ford Quotes.

“Education is preeminently a matter of quality, not amount.” — Henry Ford 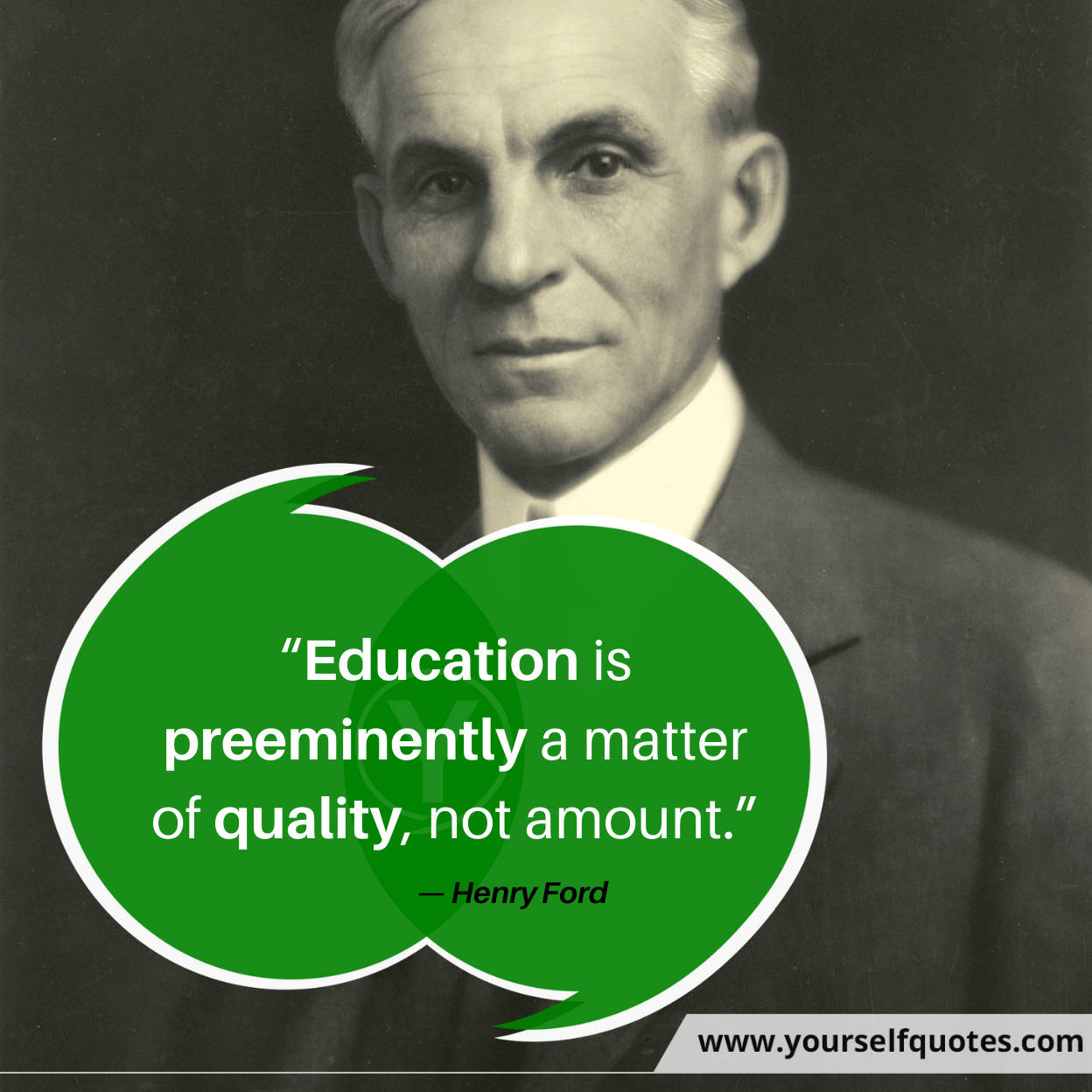 “The greatest thing we can produce is character. Everything else can be taken from us, but not our character.” ― Henry Ford

“It is well enough that people of the nation do not understand our banking & monetary system, for if they did, I believe there would be a revolution before tomorrow morning.” ― Henry Ford

“Obstacles are those frightful things you see when you take your eyes off your goal.”― Henry Ford

“When everything seems to be going against you, remember that the aeroplane takes off against the wind, not with it.” ― Henry Ford

“You may think the grass is greener on the other side. But if you take the time to water your own grass, it would be just as green.” ― Henry Ford

“A business whose main motive is to rip financial gains is not regarded as good business.” ― Henry Ford

“The short successes that can be gained in a brief time and without difficulty, are not worth much.” ― Henry Ford

“My best friend is the one who brings out the best in me.” ― Henry Ford

“To do more for the world than the world does for you – that is a success.” ― Henry Ford 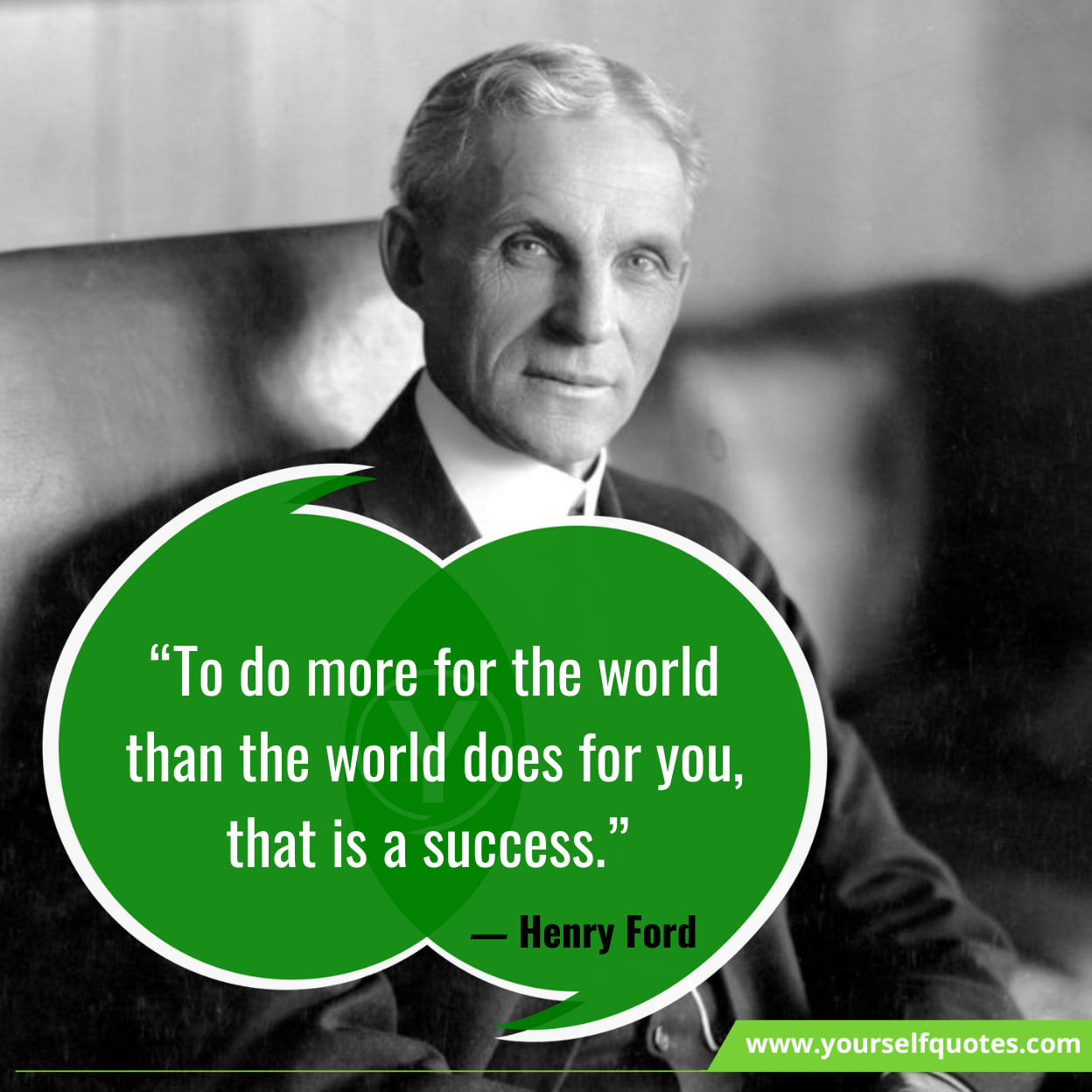 “Any man can learn anything he will, but no man can teach except to those who want to learn.” ― Henry Ford

“If everyone is moving forward together, then success takes care of itself.” ― Henry Ford

“A business absolutely devoted to service will have only one worry about profits. They will be embarrassingly large.” ― Henry Ford

“There is no disgrace in honest failure; there is disgrace in fearing to fail.” ― Henry Ford

“Even a mistake may turn out to be the one thing necessary to a worthwhile achievement.” ― Henry Ford

“There is joy in work. There is no happiness except in the realization that we have accomplished something.” ― Henry Ford

“Everything comes to him, who hustles while he waits.” ― Henry Ford

“Genius is seldom recognized for what it is: a great capacity for hard work.”― Henry Ford

Henry Ford Quotes About Working Together 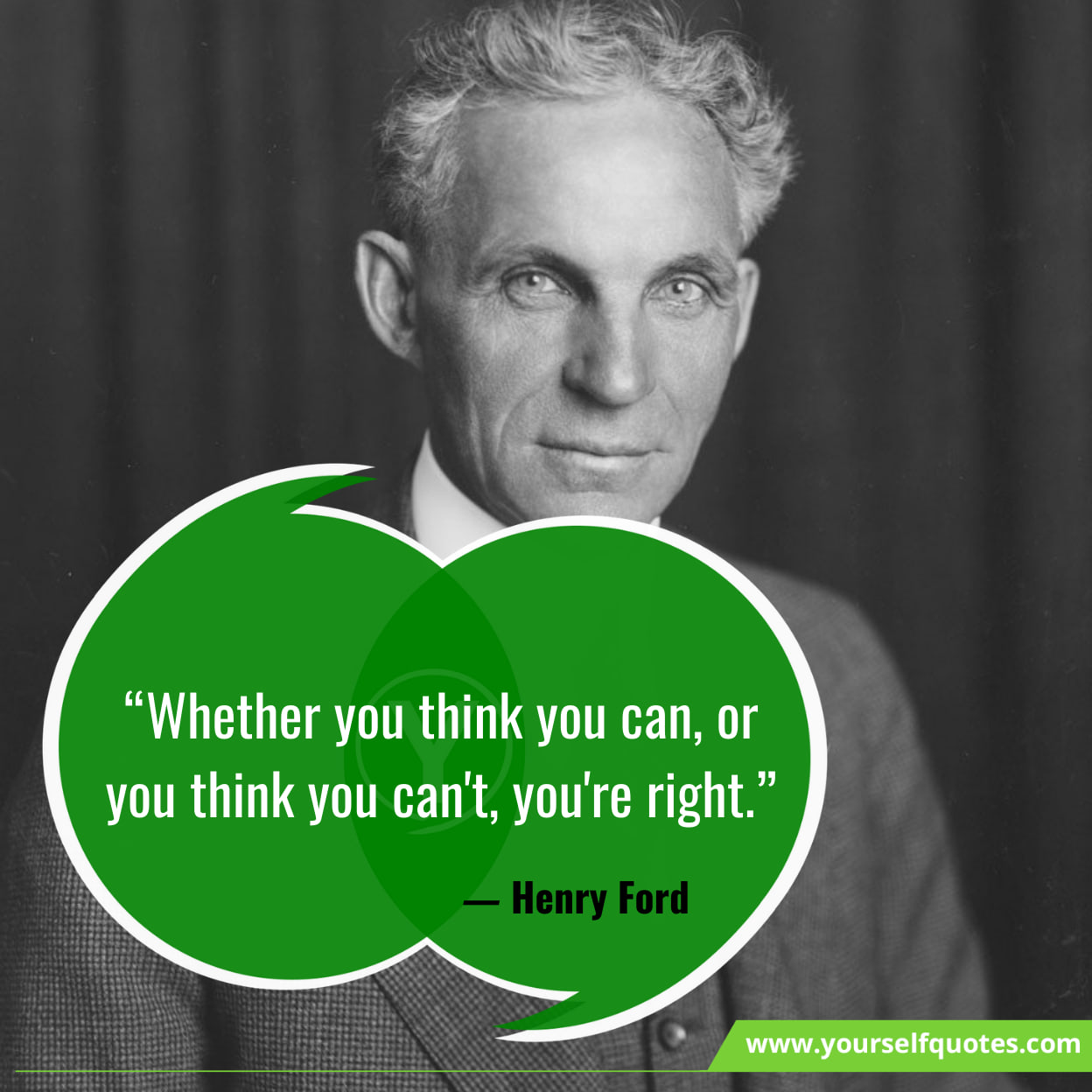 “Anyone who stops learning is old, whether at twenty or eighty. Anyone who keeps learning stays young.” ― Henry Ford

“Failure is only the opportunity more intelligently to begin again.” ― Henry Ford

“You can’t build a reputation on what you are going to do.” ― Henry Ford

“If I had asked people what they wanted, they would have said faster horses.” ― Henry Ford

“My best friend is the one who brings out the best in me.” ― Henry Ford

“The only real mistake is the one from which we learn nothing.” ― Henry Ford

“Obstacles are those frightful things you see when you take your eyes off your goals.” ― Henry Ford

“Quality means doing it right when no one is looking.” ― Henry Ford 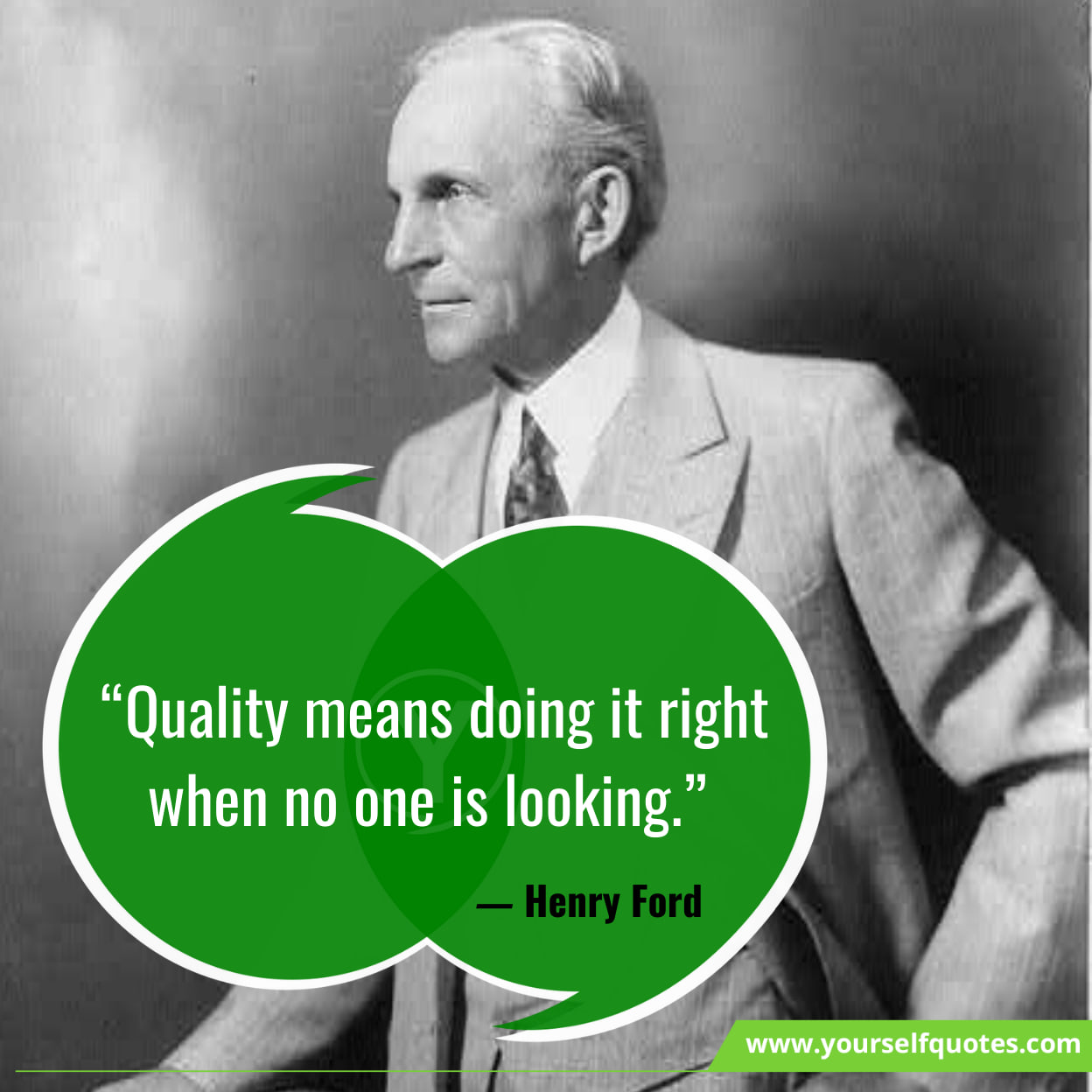 “When everything seems to be going against you, remember that the airplane takes off against the wind, not with it ….” ― Henry Ford

“Thinking is the hardest work there is, which is probably the reason so few engage in it.” ― Henry Ford

“Any customer can have a car painted any color that he wants, so long as it is black.” ― Henry Ford

“It is well enough that people of the nation do not understand our banking and monetary system, for if they did, I believe there would be a revolution before tomorrow morning.” ― Henry Ford

“If money is your hope for independence, you will never have it. The only real security that a man can have in this world is a reserve of knowledge, experience, and ability.” ― Henry Ford

“The whole secret of a successful life is to find out what is one’s destiny to do, and then do it.” ― Henry Ford 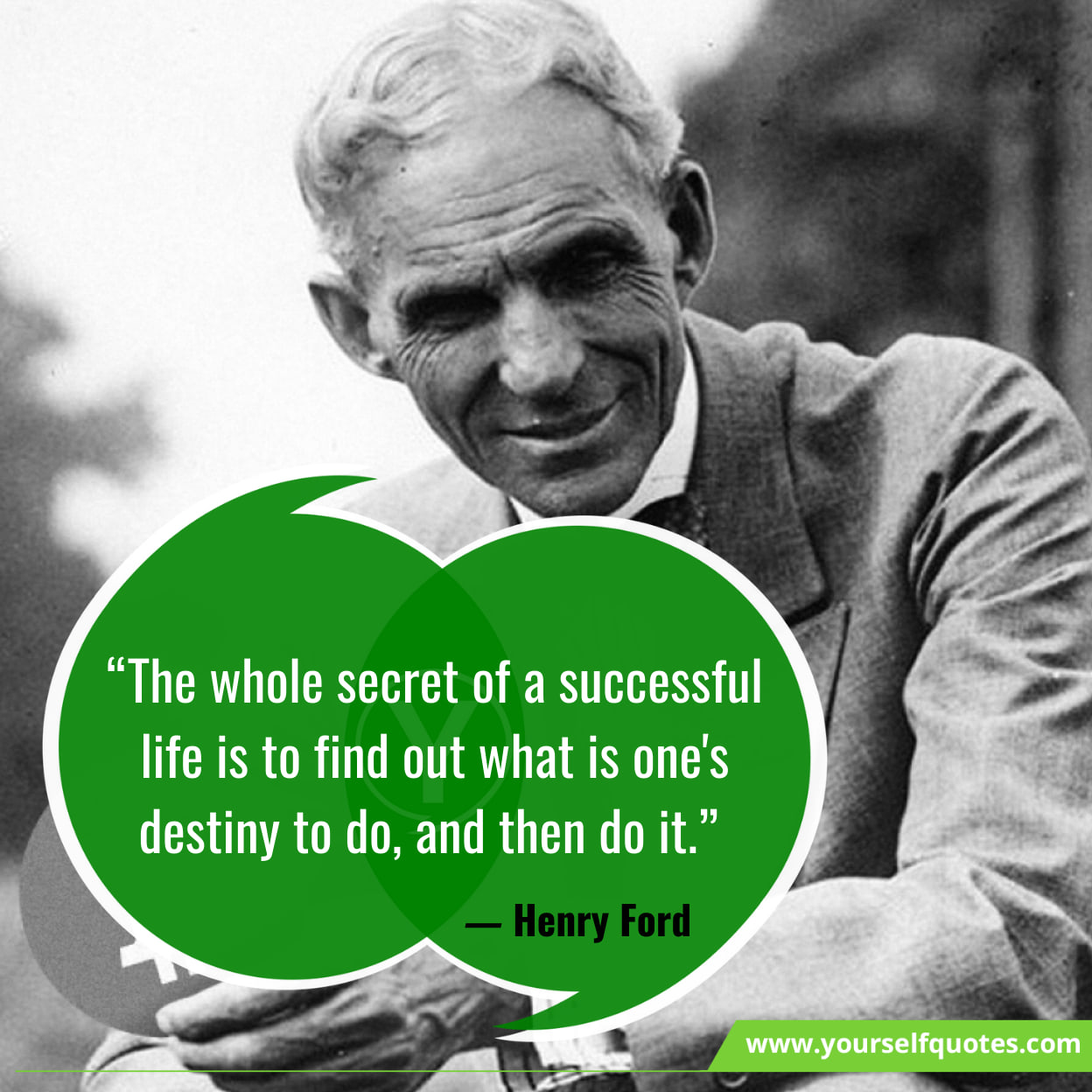 “One of the greatest discoveries a person makes, one of their great surprises, is to find they can do what they were afraid they couldn’t do.” ― Henry Ford

“Most people spend more time and energy going around problems than in trying to solve them.” ― Henry Ford

take care of him, better take a closer look at the American Indian.”― Henry Ford

“You say I started out with practically nothing, but that isn’t correct. We all start with all there is, it’s how we use it that makes things possible.” ― Henry Ford

“There is no man living who isn’t capable of doing more than he thinks he can do.” ― Henry Ford

“If there is any one secret of success, it lies in the ability to get the other person’s point of view and see things from that person’s angle as well as from your own.” ― Henry Ford

“I see no advantage in these new clocks. They run no faster than the ones made 100 years ago.” ― Henry Ford

“There are three things that grow more precious with age; old wood to burn, old books to read, and old friends to enjoy.” ― Henry Ford

“A business that makes nothing but money is a poor business.” ― Henry Ford

“The only prosperity the people can afford to be satisfied with is the kind that lasts.” — Henry Ford 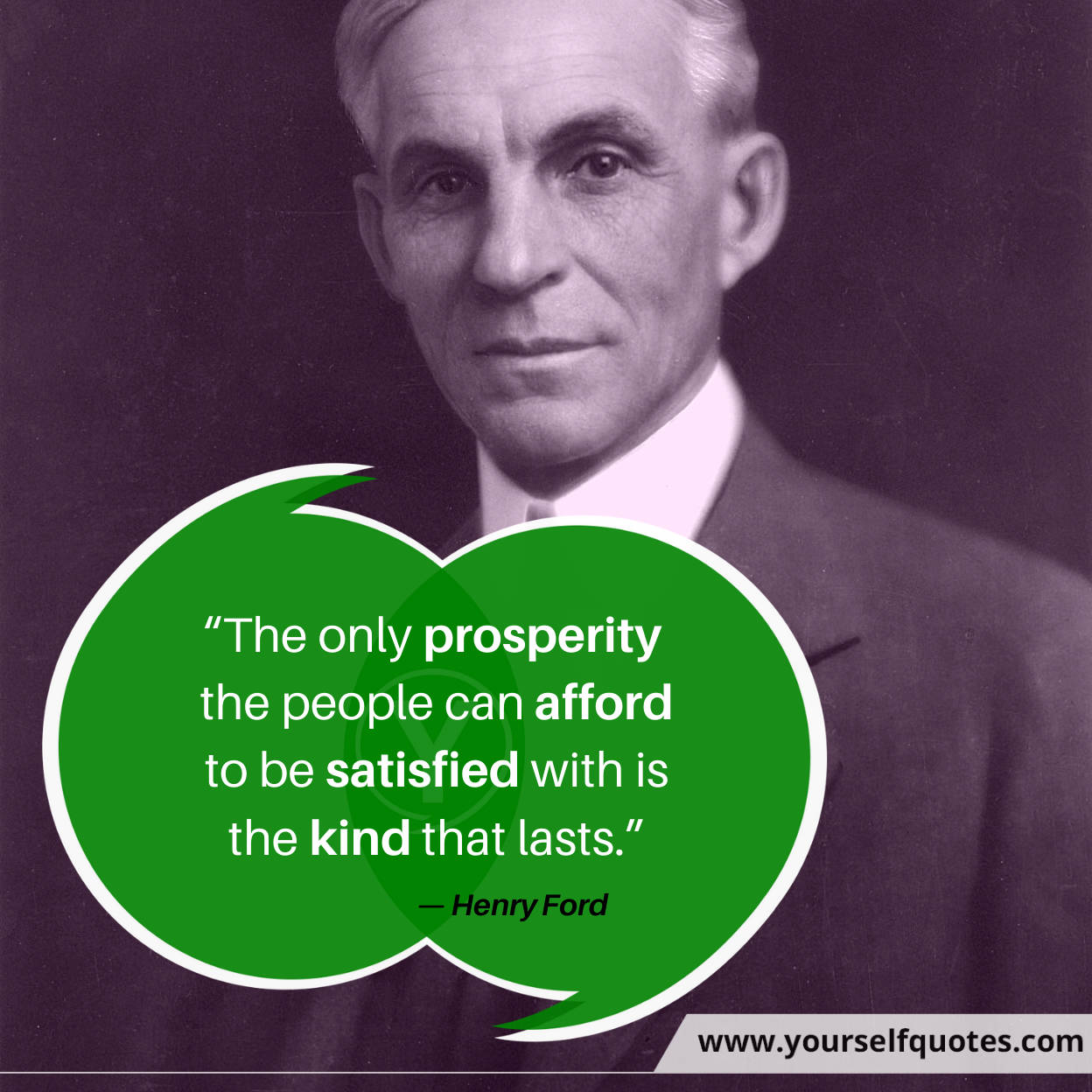 “Politics in the true sense, have to do with the prosperity, peace and security of the people.” — Henry Ford 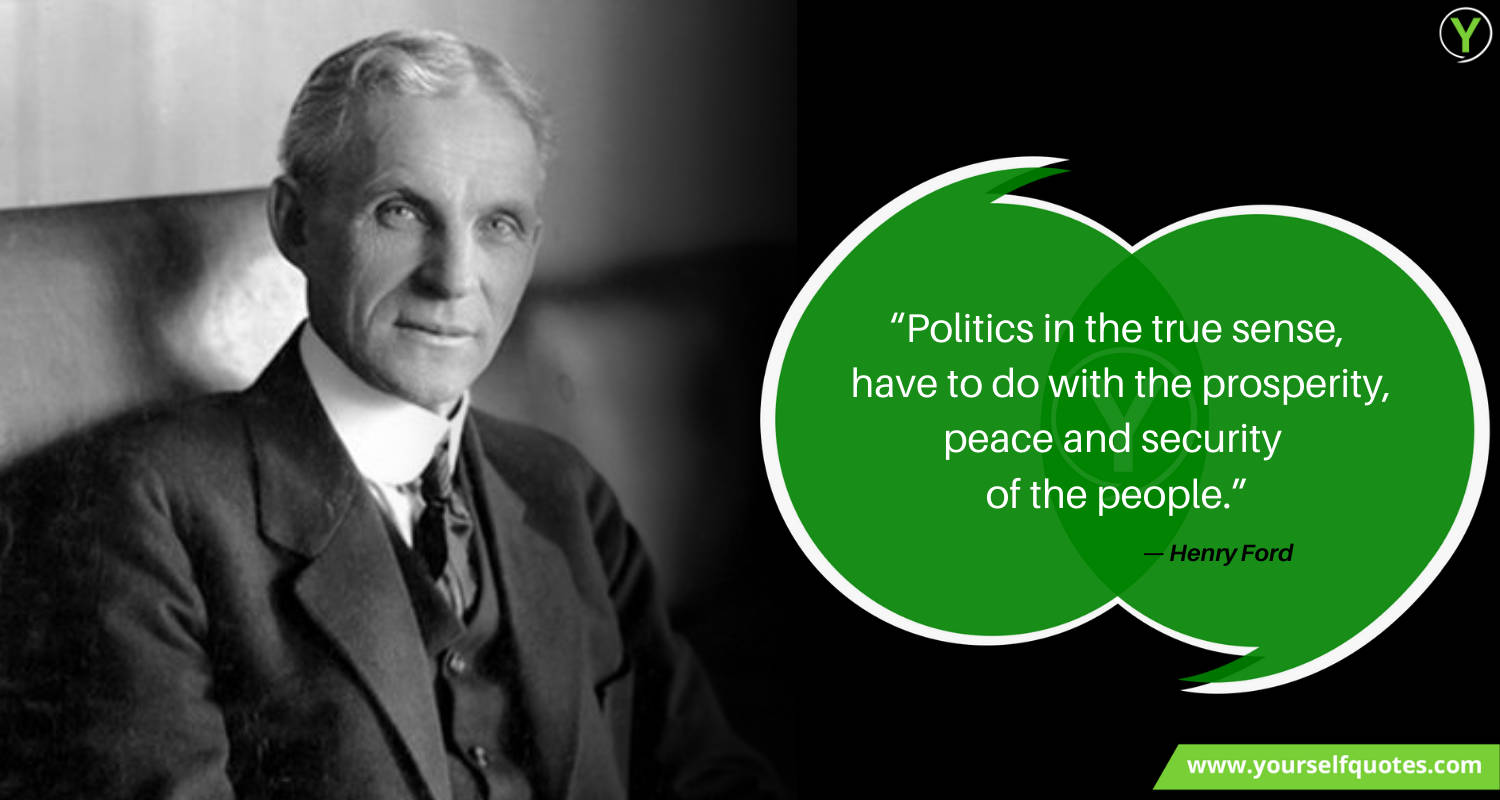 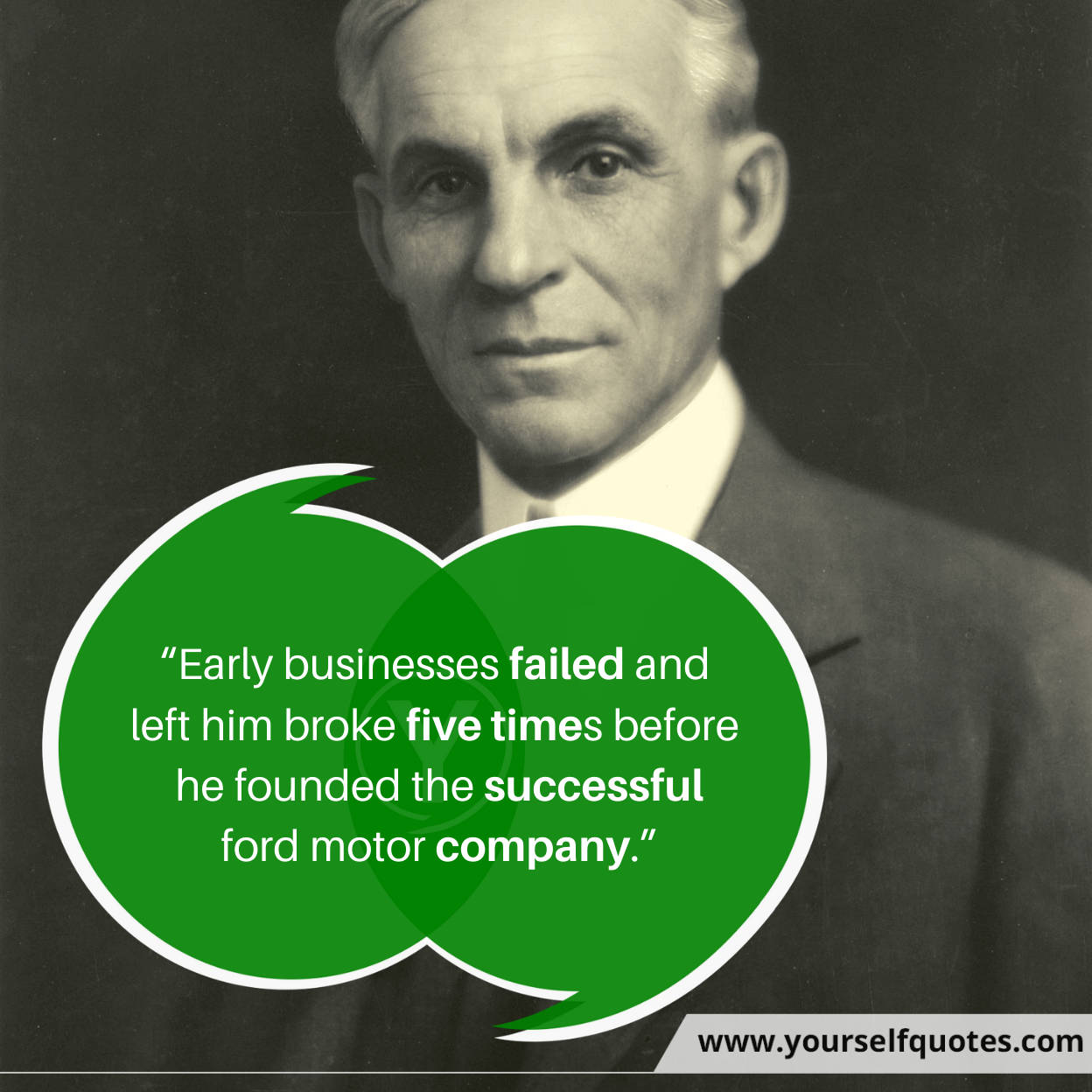 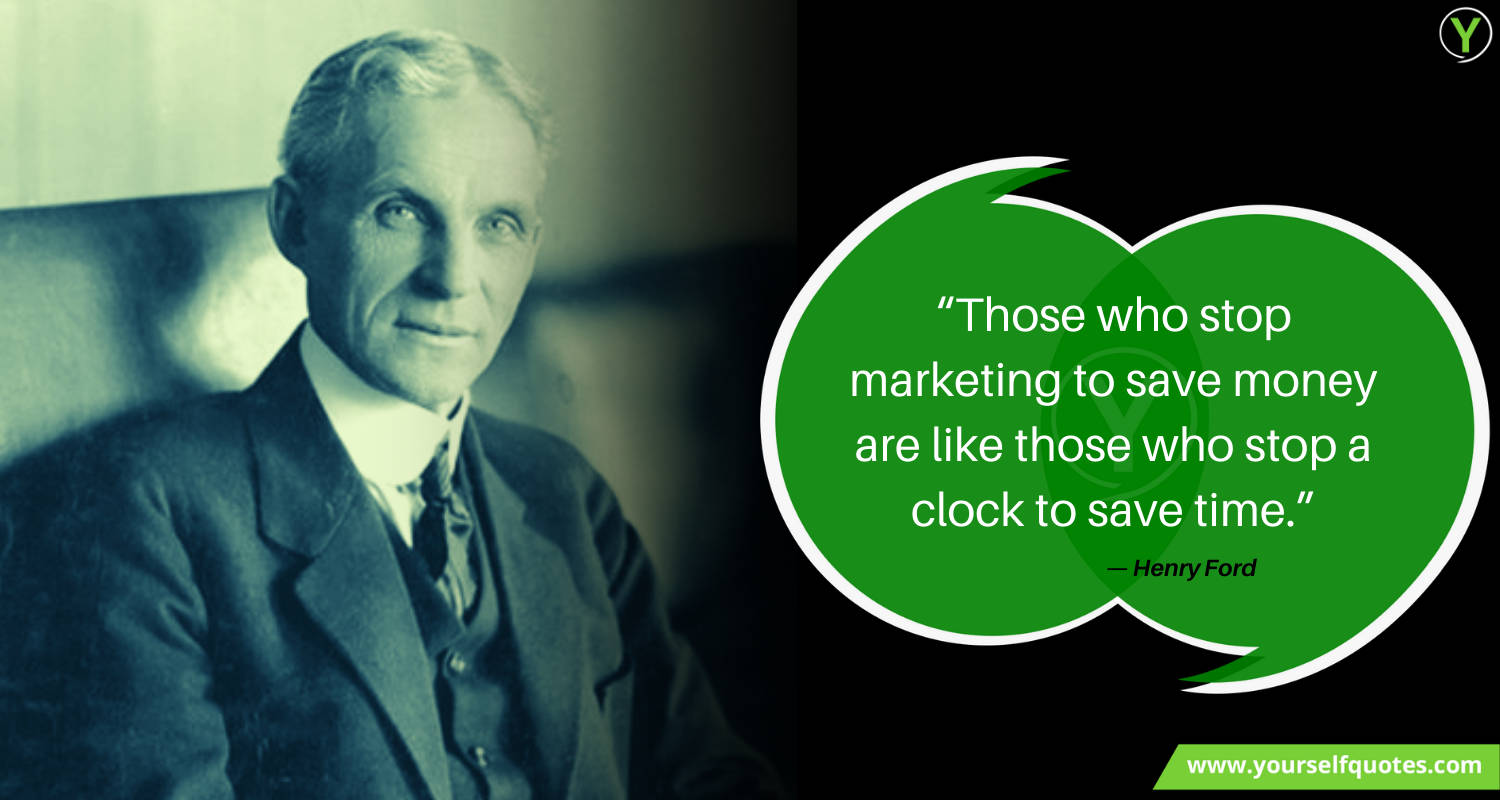 “The object of education is not to fill a man’s mind with facts; it is to teach him how to use his mind in thinking.” — Henry Ford 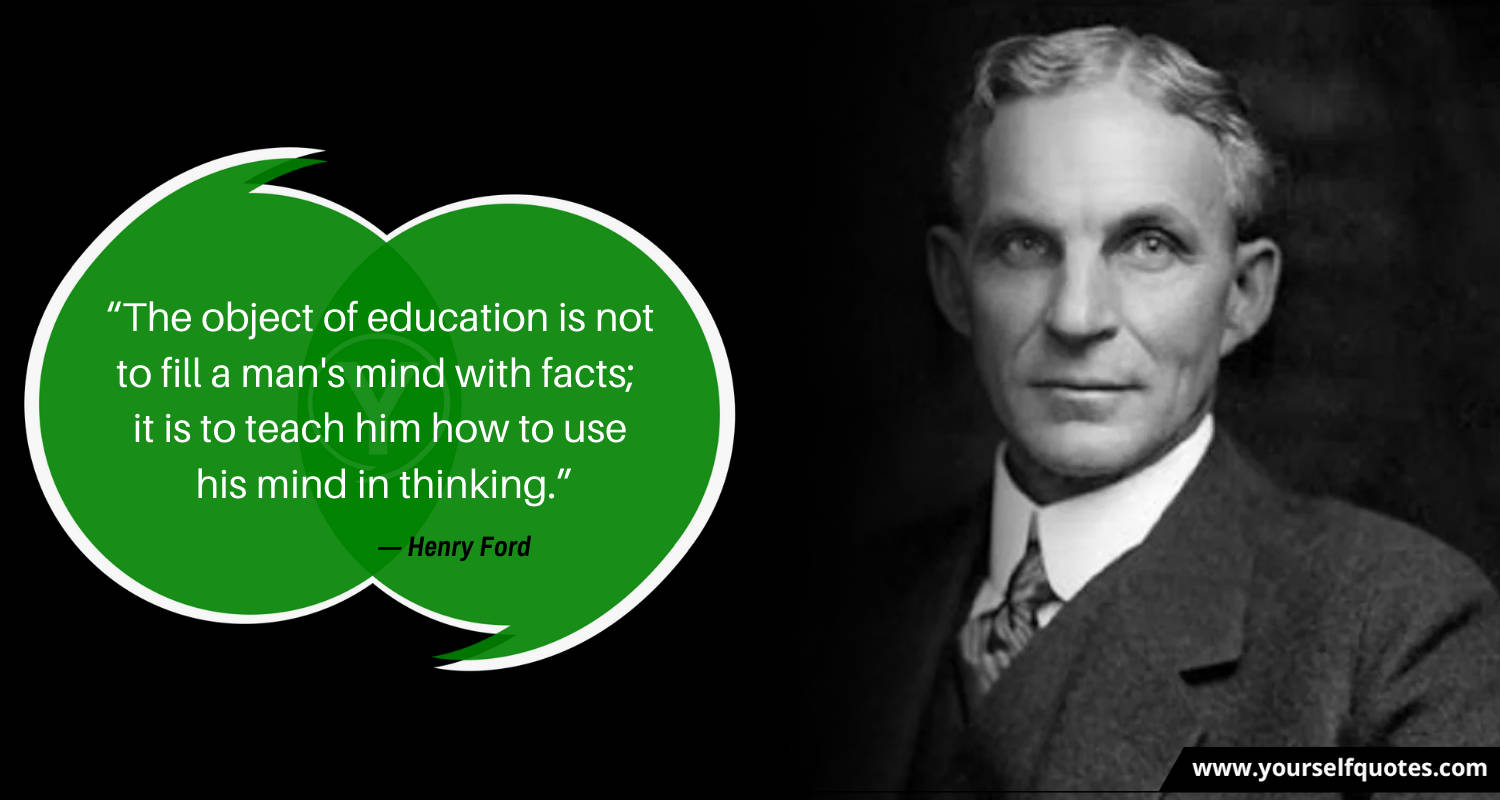 “The best way is always the simplest. The attics of the world are cluttered up with complicated failures.” — Henry Ford 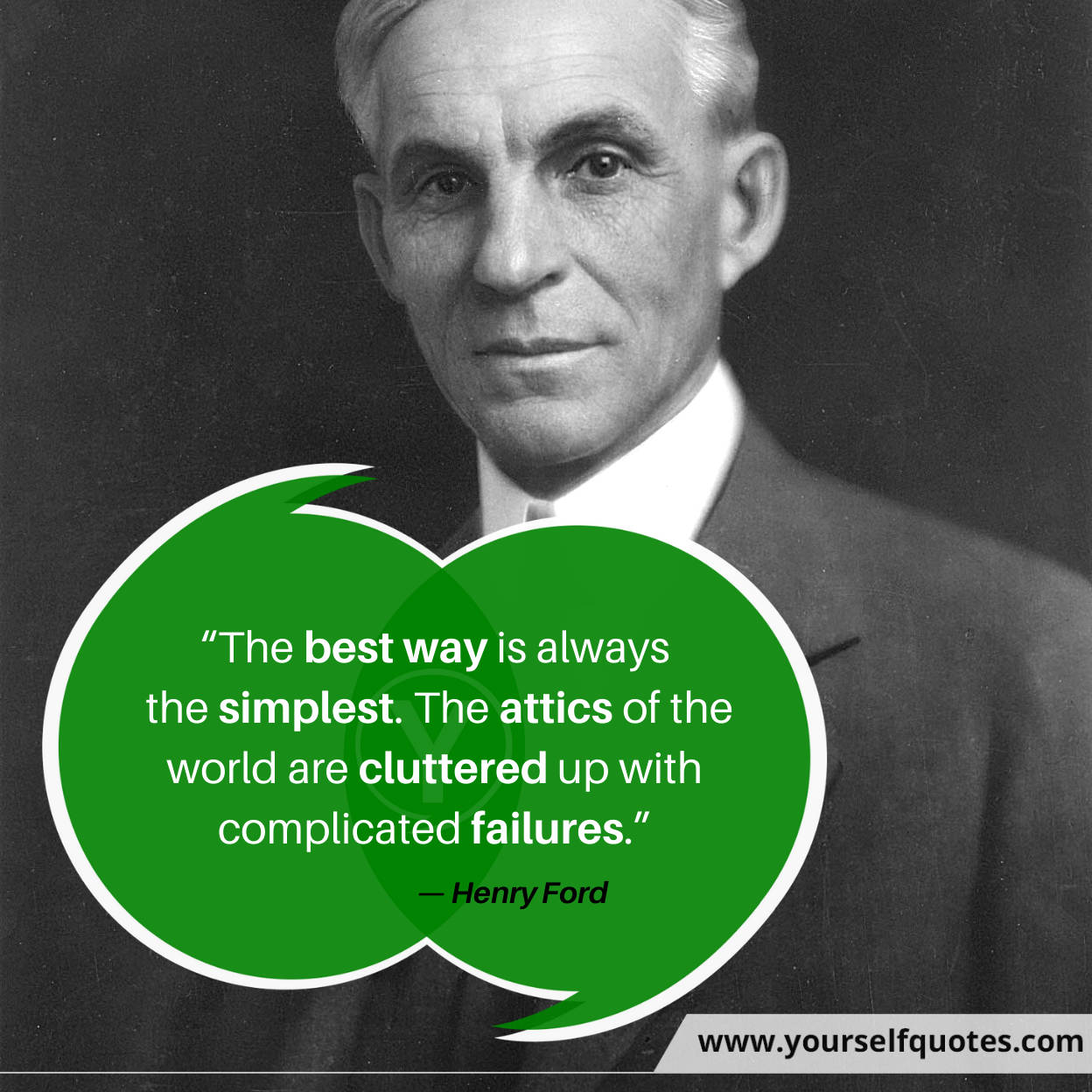 “Thinking is the hardest work there is, which is probably the reason why so few engage in it.” — Henry Ford 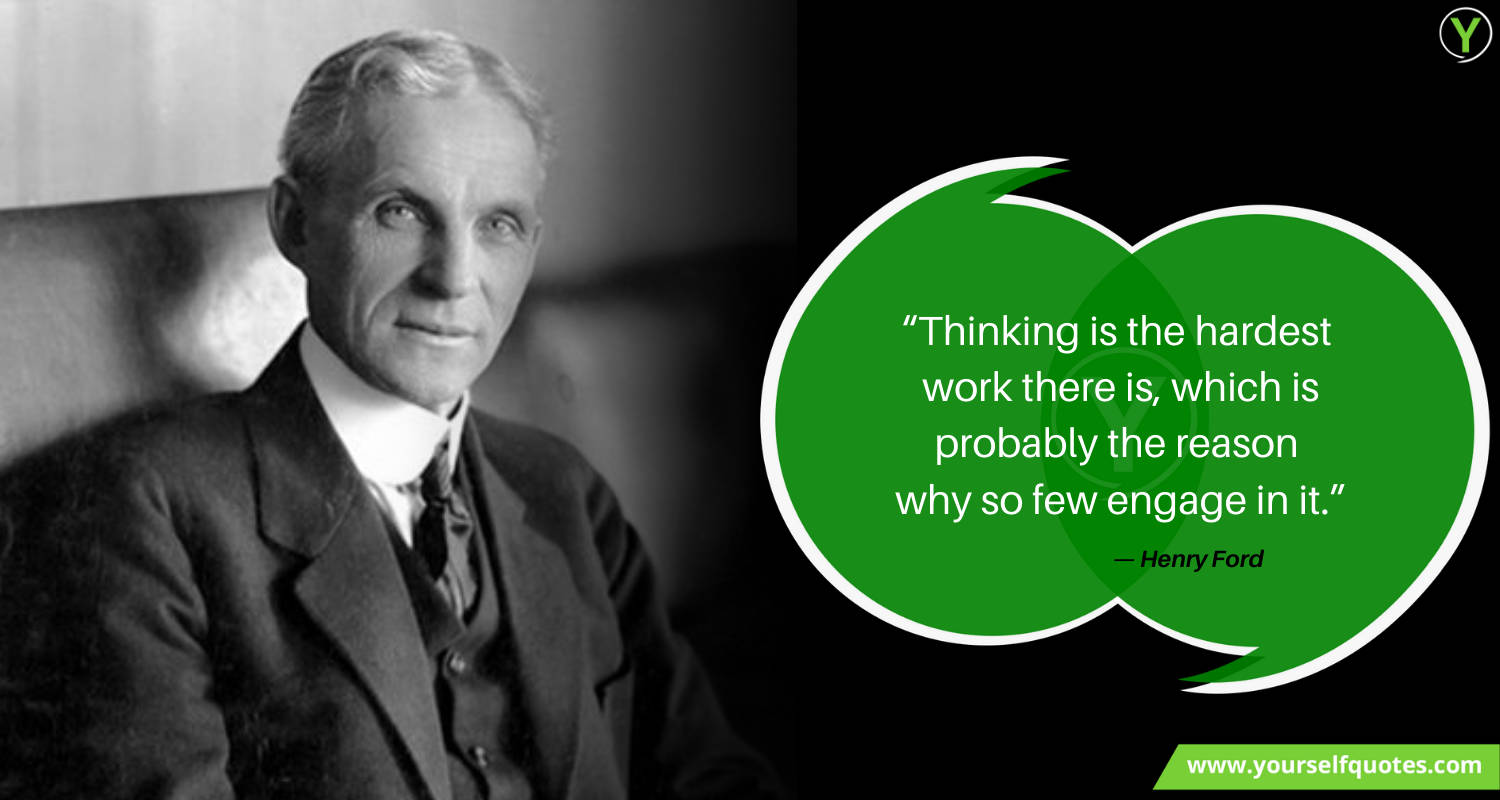 Henry Ford, who founded Ford Motors, was the man who, through the introduction of mass production, revolutionized the automotive industry almost single-handedly.

Ford was a man who believed in a ‘Higher Mind’ presence, “Somewhere is a Supreme Mind sends us brain wave signals. There’s a Great Spirit. I’ve never done it of my own will. I’ve been guided by unseen powers inside and beyond me.”

In Greenfield Village, a public viewing was held, where up to 5,000 people per hour filed past the casket. Funeral rites took place in St. Paul’s Cathedral Church in Detroit, and he was buried in Detroit’s Ford Cemetery.

We hope Ford’s business psychology will always amuse you all. So spread out these Henry Ford Quotes Images with your family, friends, and loved ones only from Yourself Quotes.