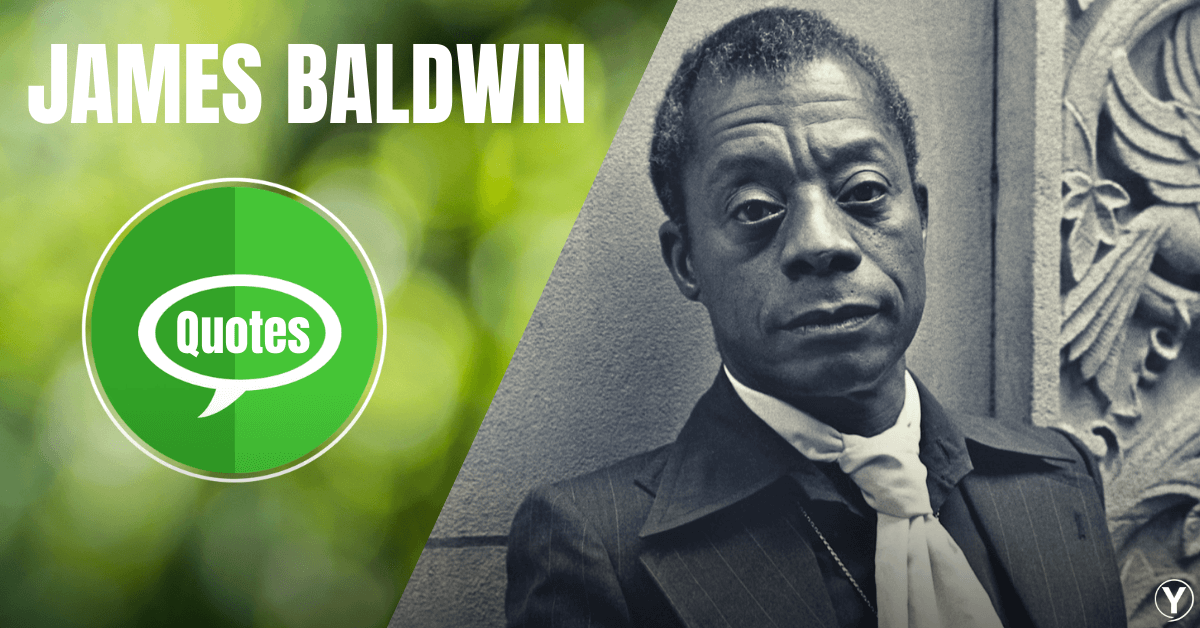 James Baldwin’s full name James Arthur Baldwin was a famous American novelist, playwright, and activist. He wrote many popular essays and novels. The man was especially known for his essays on the black experience in America. (James Baldwin Quotes)

James Baldwin Family: James’ mother was Emma Berdis Jones. She remarried to a Baptist preacher David Baldwin, with whom she had eight children. James led a very poor childhood.

James Baldwin’s first novel was published in 1953 with the name of Go Tell It on the Mountain, a semi-autobiographical Bildungsroman. Then came his first collection of essays,  Notes of a Native Son. His second novel was Giovanni’s Room. This was published in 1953. Throughout his career, he published poetry and plays. The other works included fiction and essays for which he was well-known. Apart from the mentioned novels, many others were published thereafter. The other novels were Another Country (1962) and Tell Me How Long the Train’s Been Gone (1968). Most of his writings dealt with black and white characters and with heterosexual, gay, and bisexual characters.

Apart from writing and being a great novelist, James Baldwin was a social and political activist. He aligned himself with the ideals of the Congress of Racial Equality (CORE) and the Student Nonviolent Coordinating Committee (SNCC). He supported the Gay Liberation Movement. He made a prominent appearance at the March on Washington for Jobs and Freedom. Indeed he was a great novelist whose work fictionalizes fundamental personal questions and dilemmas amid complex social and psychological pressures thwarting the equitable integration of not only African Americans but also gay and bisexual men while depicting some internalized obstacles to such individuals’ quests for acceptance.

Now let’s have a look at the most surprising James Baldwin Quotes.

“I can’t believe what you say, because I see what you do.” — James Baldwin 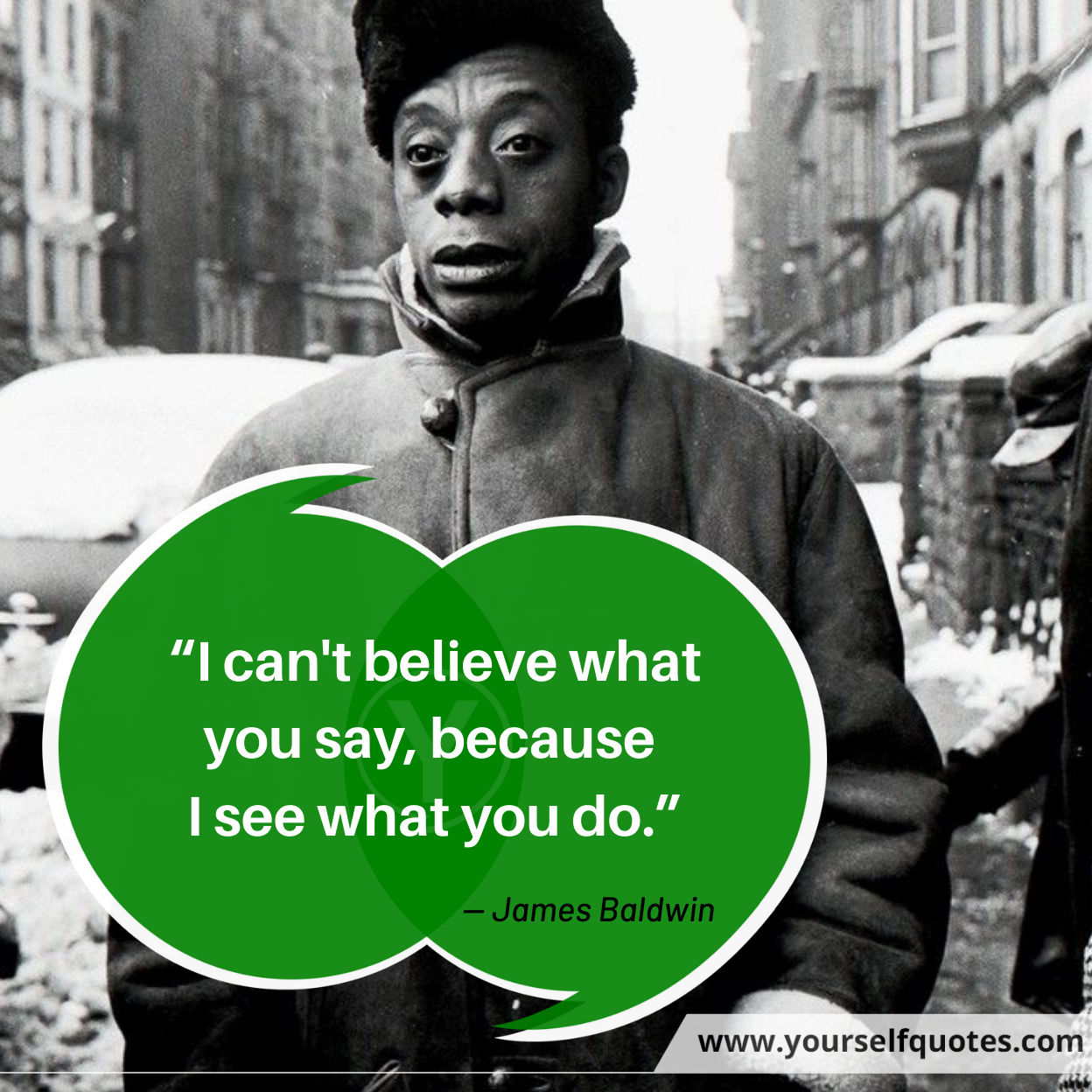 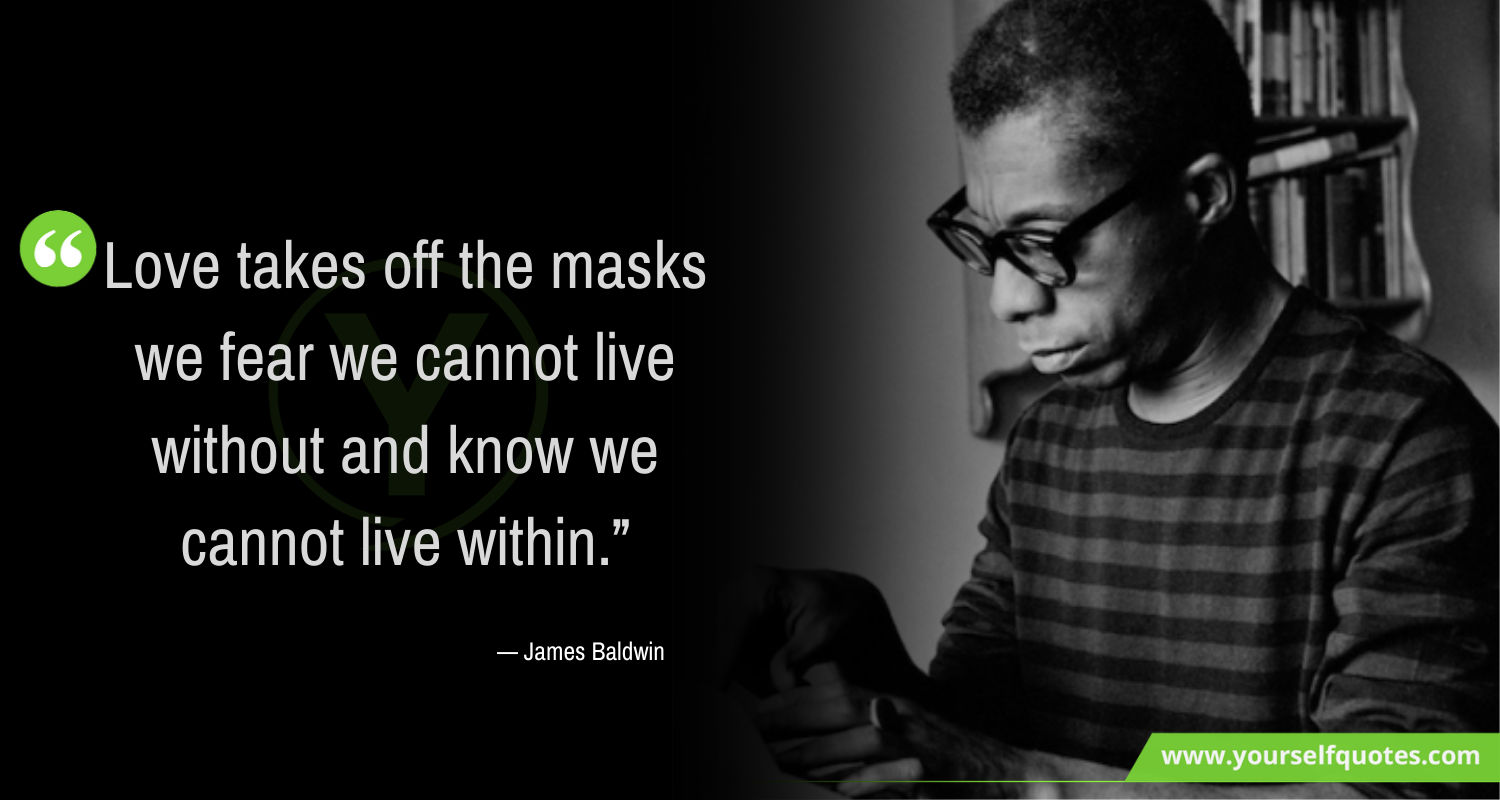 “People who shut their eyes to reality simply invite their own destruction.” — James Baldwin 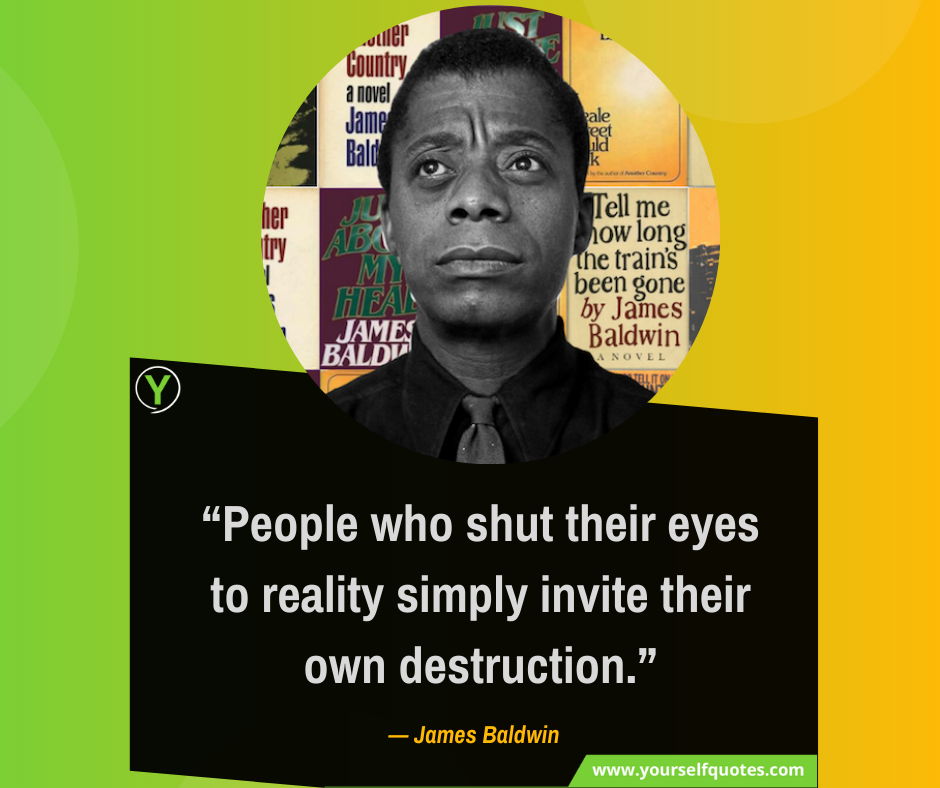 “The place in which I’ll fit will not exist until I make it.” — James Baldwin 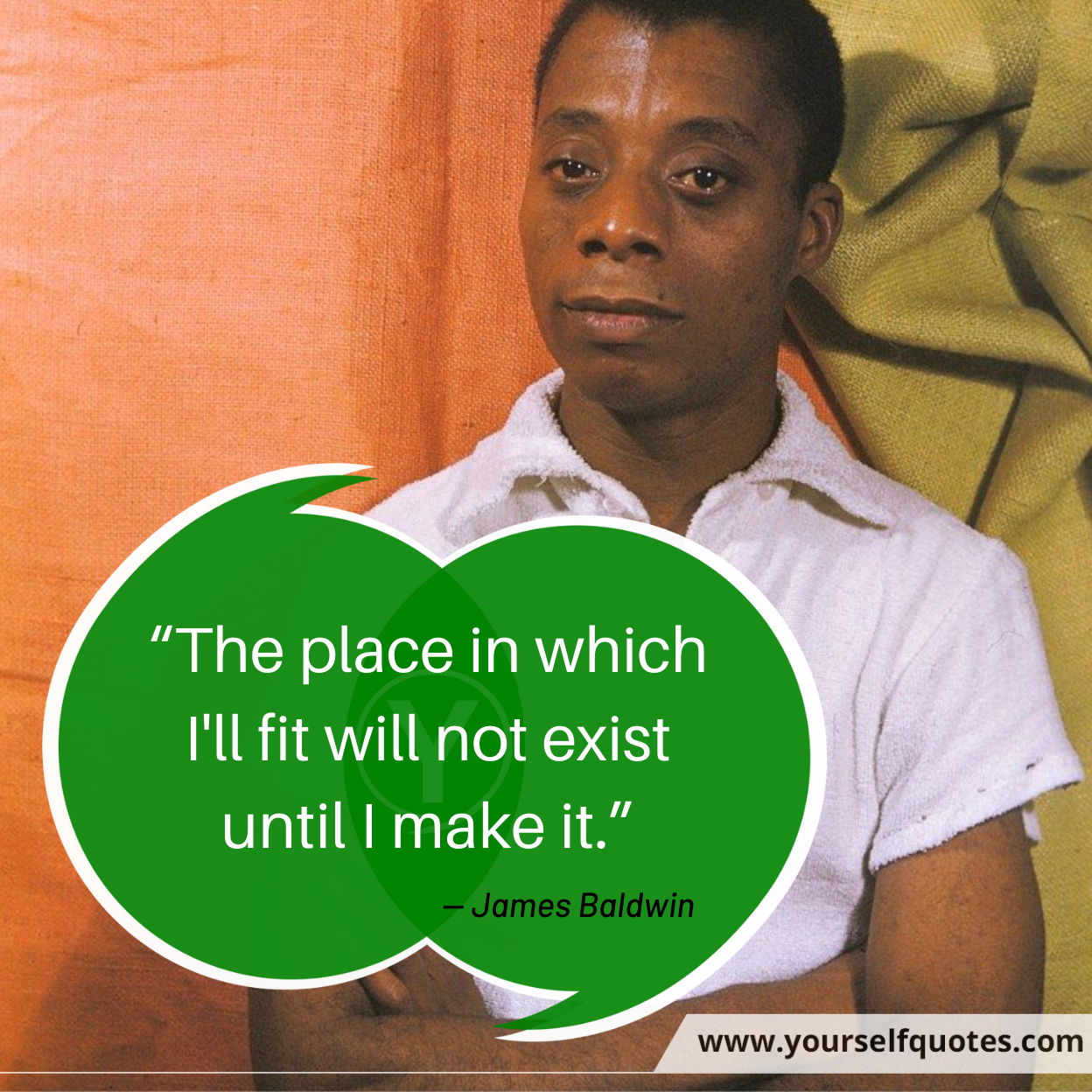 “You cannot fix what you will not face.” — James Baldwin 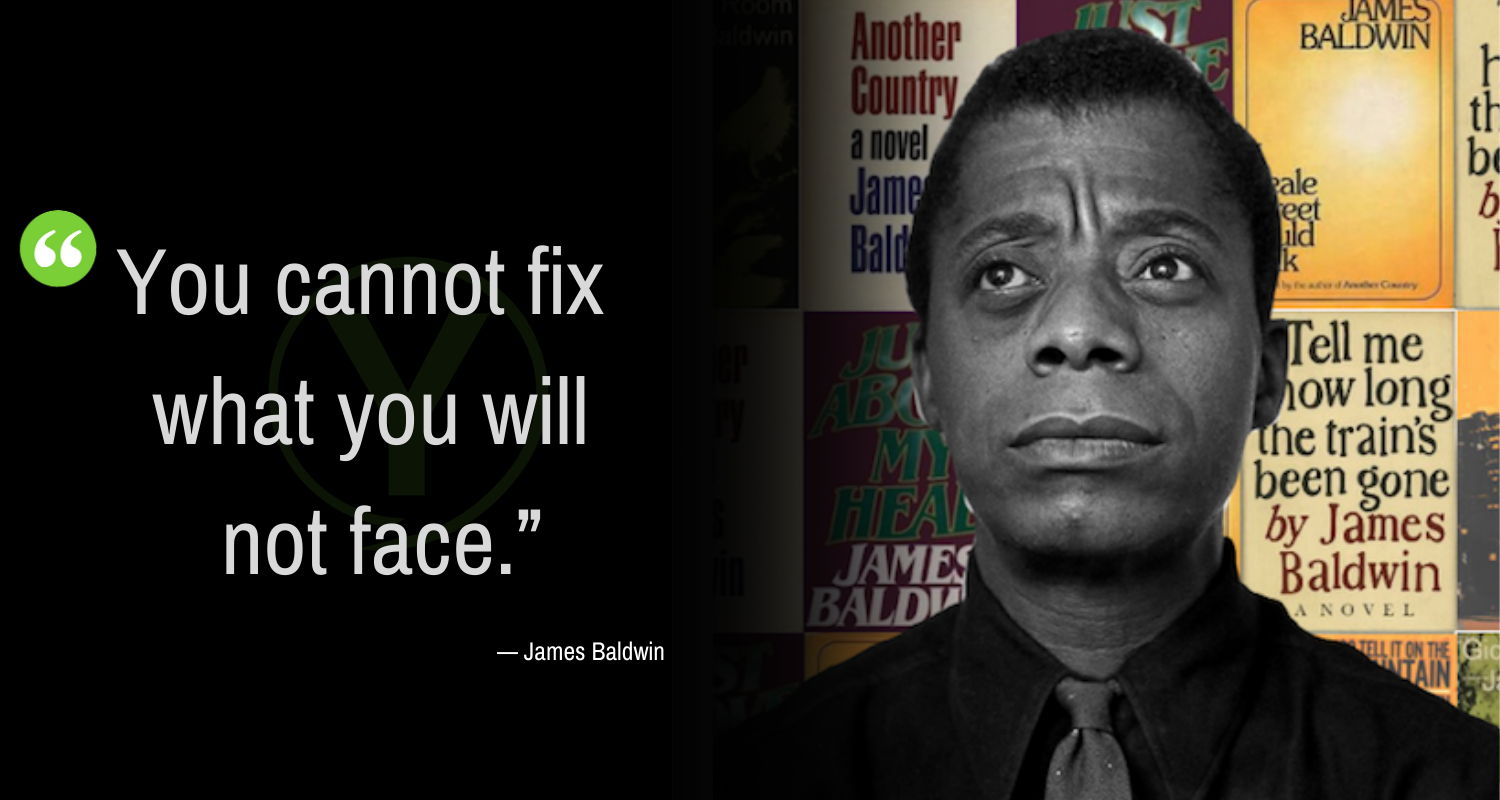 “To be black and conscious in America is to be in a constant state of rage.” — James Baldwin 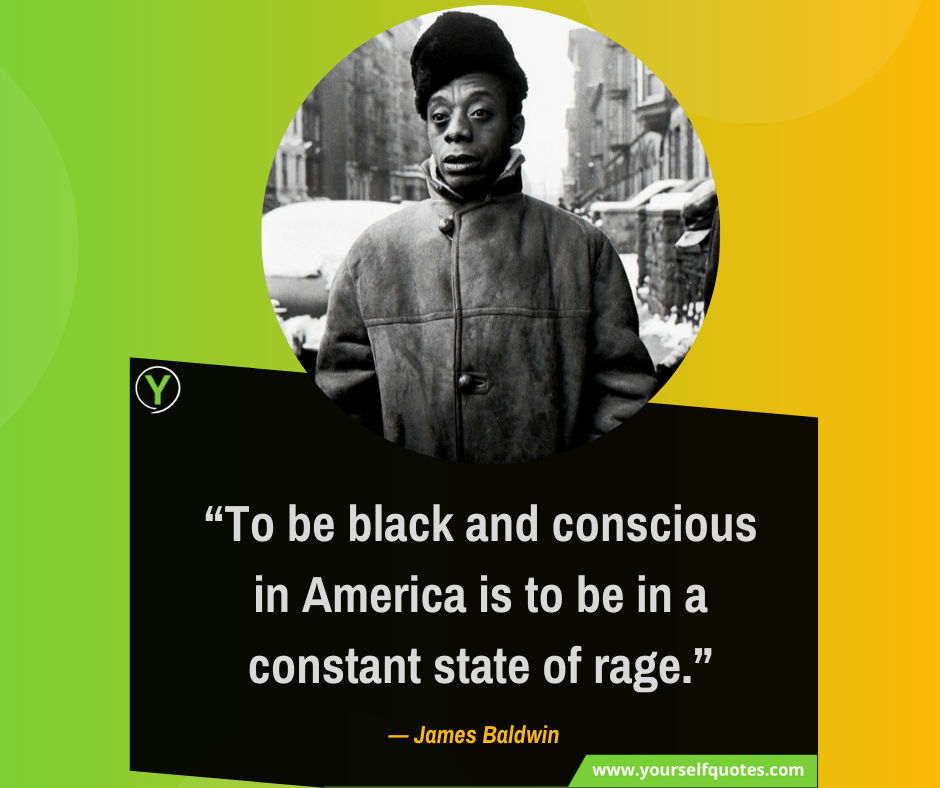 “Children have never been very good at listening to their elders, but they have never failed to imitate them.” — James Baldwin 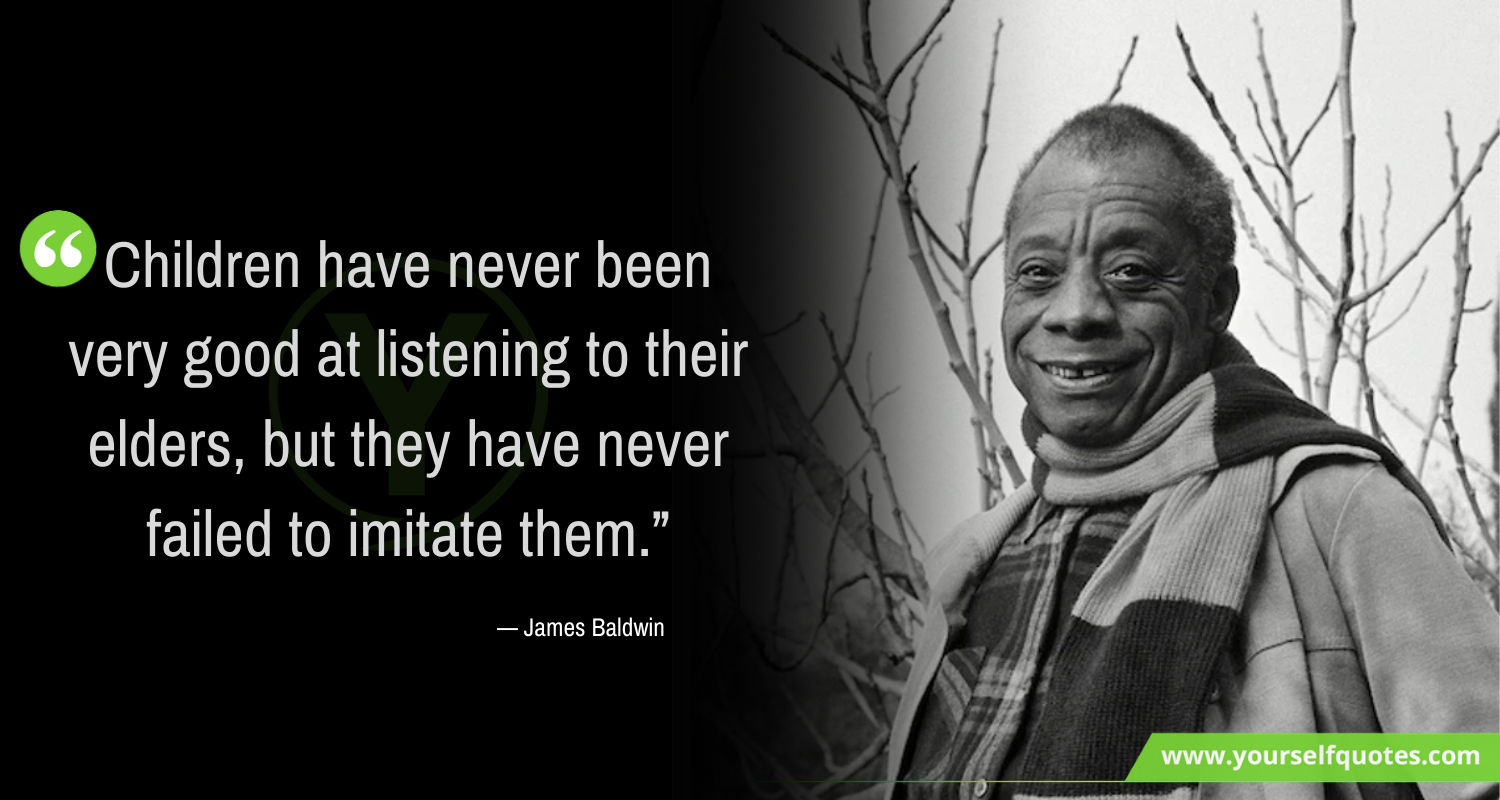 “Perhaps home is not a place but simply an irrevocable condition.” — James Baldwin 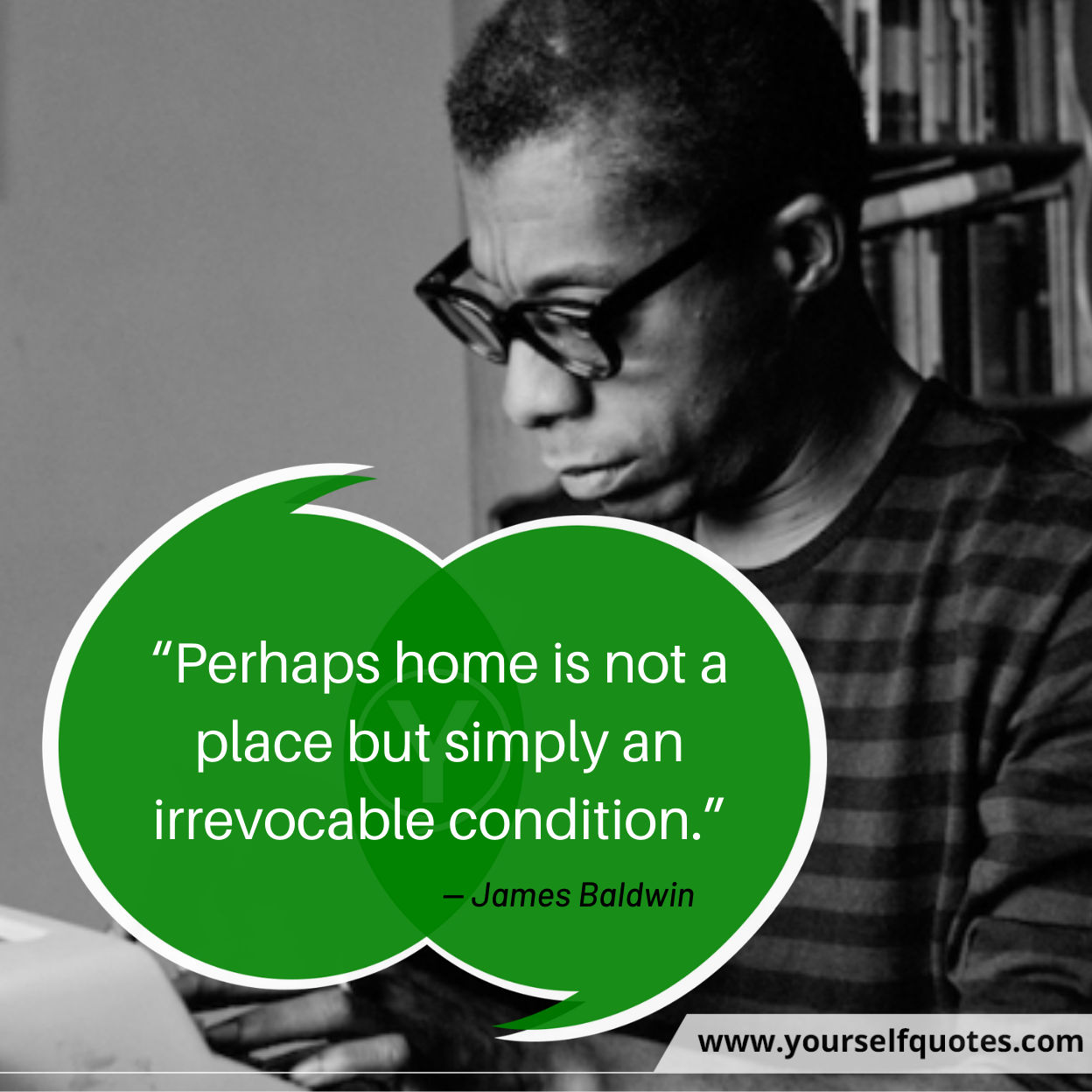 “All art is a kind of confession, more or less oblique. All artists, if they are to survive, are forced, at last, to tell the whole story; to vomit the anguish up.” — James Baldwin 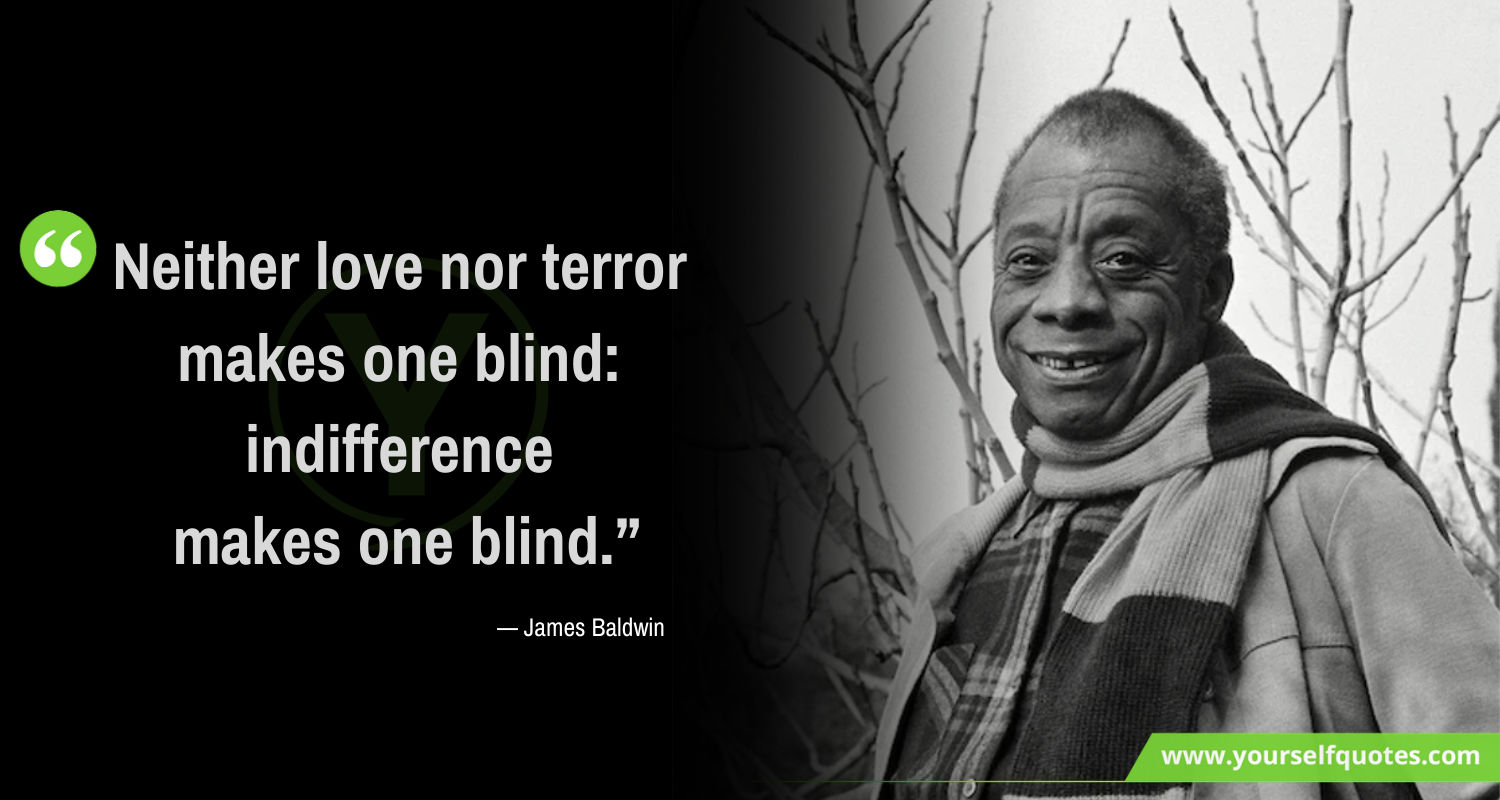 “If the concept of God has any validity or any use, it can only be to make us larger, freer, and more loving. If God cannot do this, then it is time we got rid of Him.” — James Baldwin

“The occurrence of an event is not the same thing as knowing what it is that one has lived through.” — James Baldwin 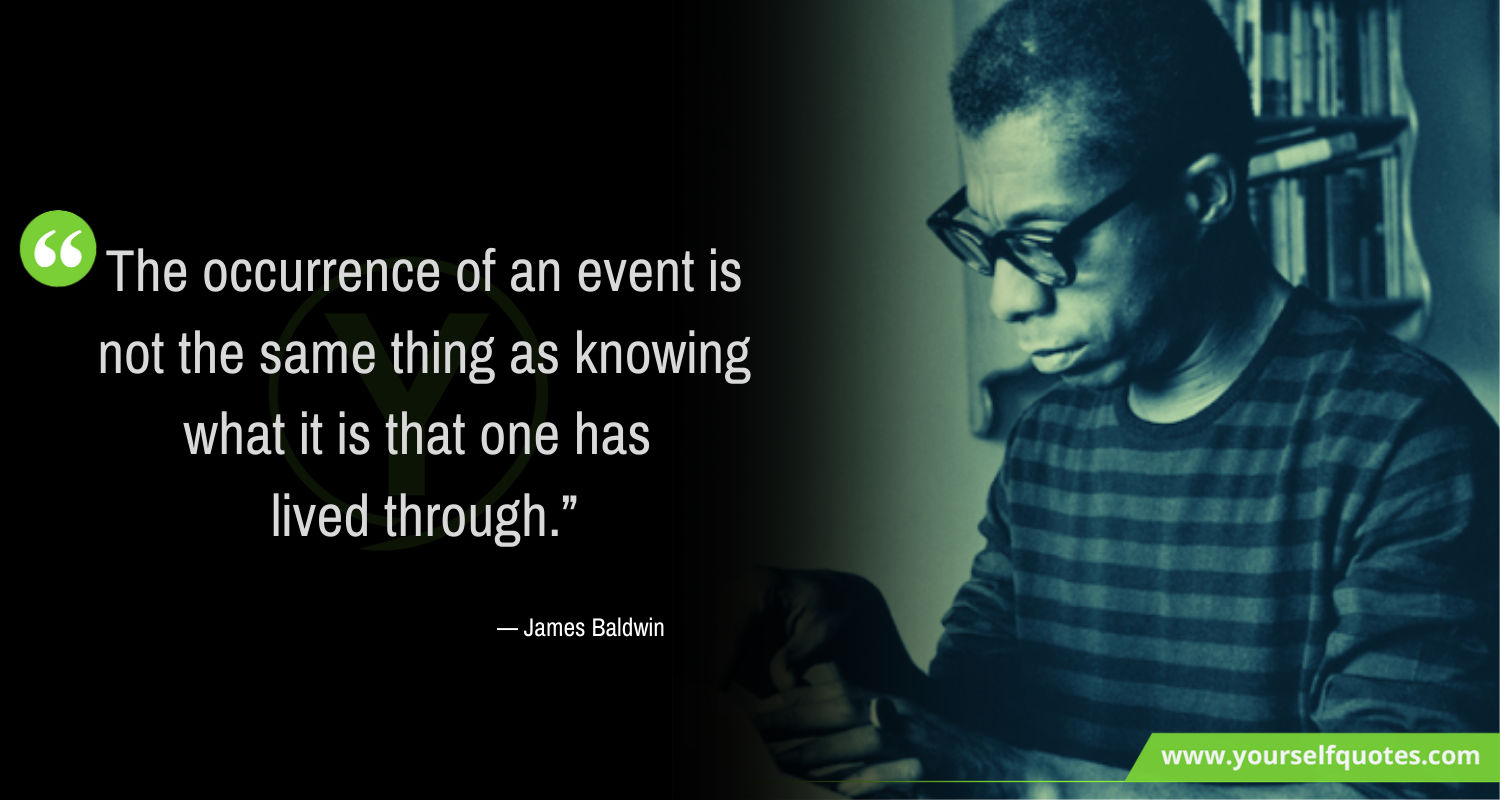 “I think all theories are suspect, that the finest principles may have to be modified, or may even be pulverized by the demands of life, and that one must find, therefore, one’s own moral center and move through the world hoping that this center will guide one aright.” — James Baldwin

“The mind is like an object that picks up dust. The object doesn’t know, any more than the mind does, why what clings to it clings.” — James Baldwin 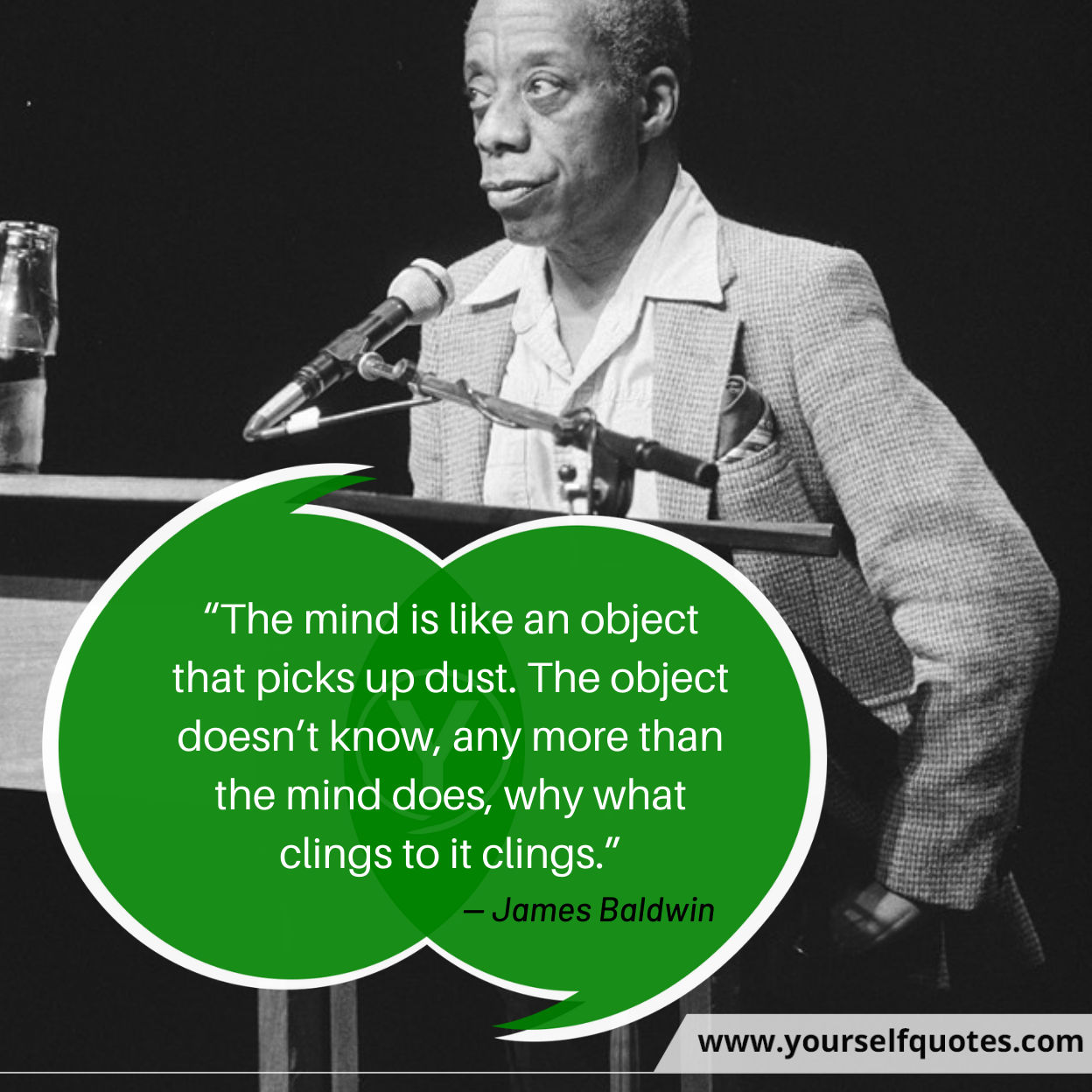 “But that battered word, truth, having made its appearance here, confronts one immediately with a series of riddles and has, moreover, since so many gospels are preached, the unfortunate tendency to make one belligerent.” — James Baldwin

“Whenever we encounter him in the flesh, our faith is made perfect and his necessary and bloody end is executed with a mystical ferocity of joy.” — James Baldwin

“If dirty words frighten you … I really don’t know how you have managed to live so long. People are full of dirty words. The only time they do not use them, most people I mean, is when they are describing something dirty.” — James Baldwin

“You think your pain and your heartbreak are unprecedented in the history of the world, but then you read.” — James Baldwin 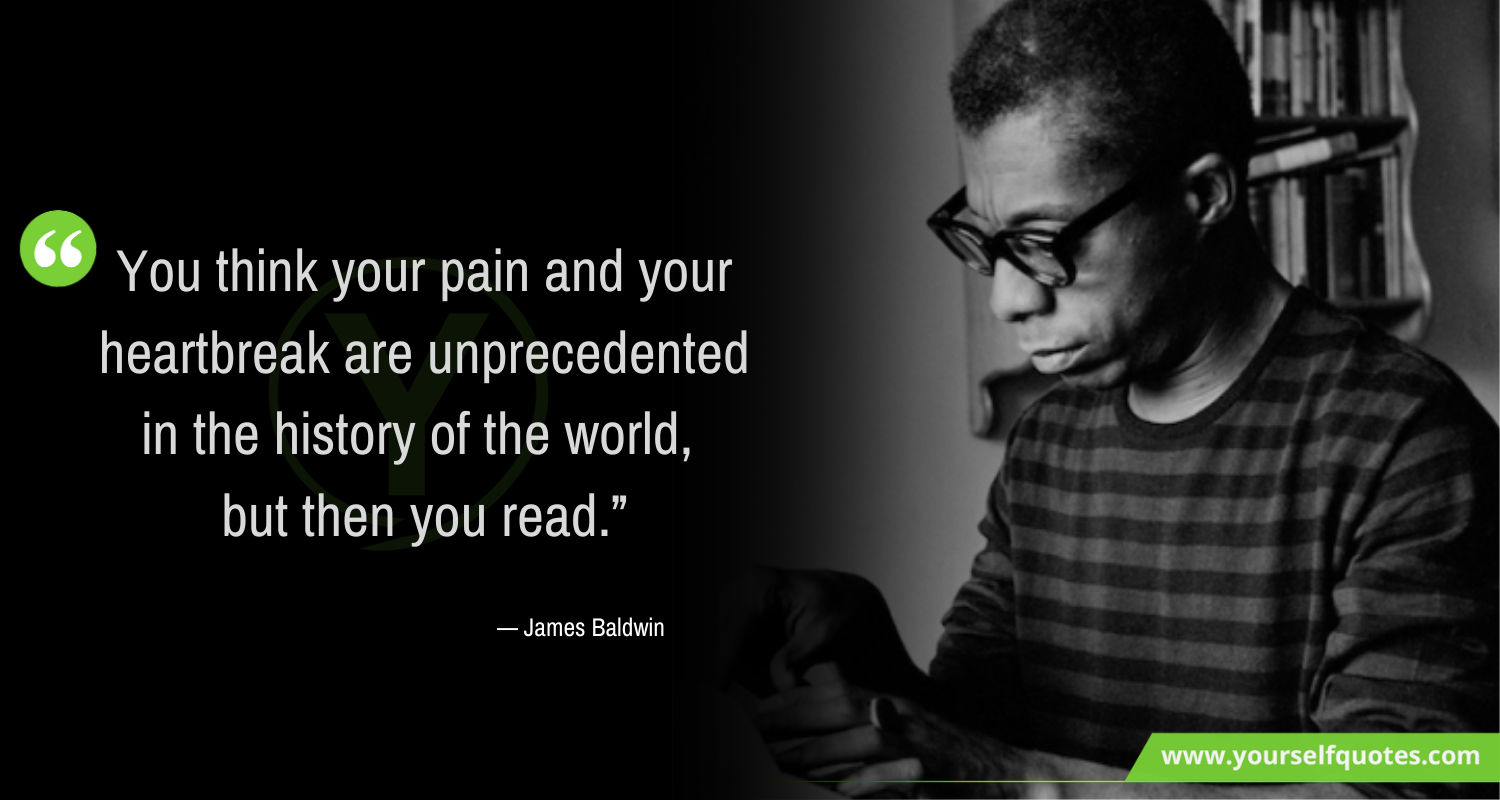 “Racism is a word which describes one of the results–perhaps the principal result–of our estrangement from our beginnings, from the universal source.” — James Baldwin

“Love him and let him love you. Do you think anything else under heaven really matters?” — James Baldwin 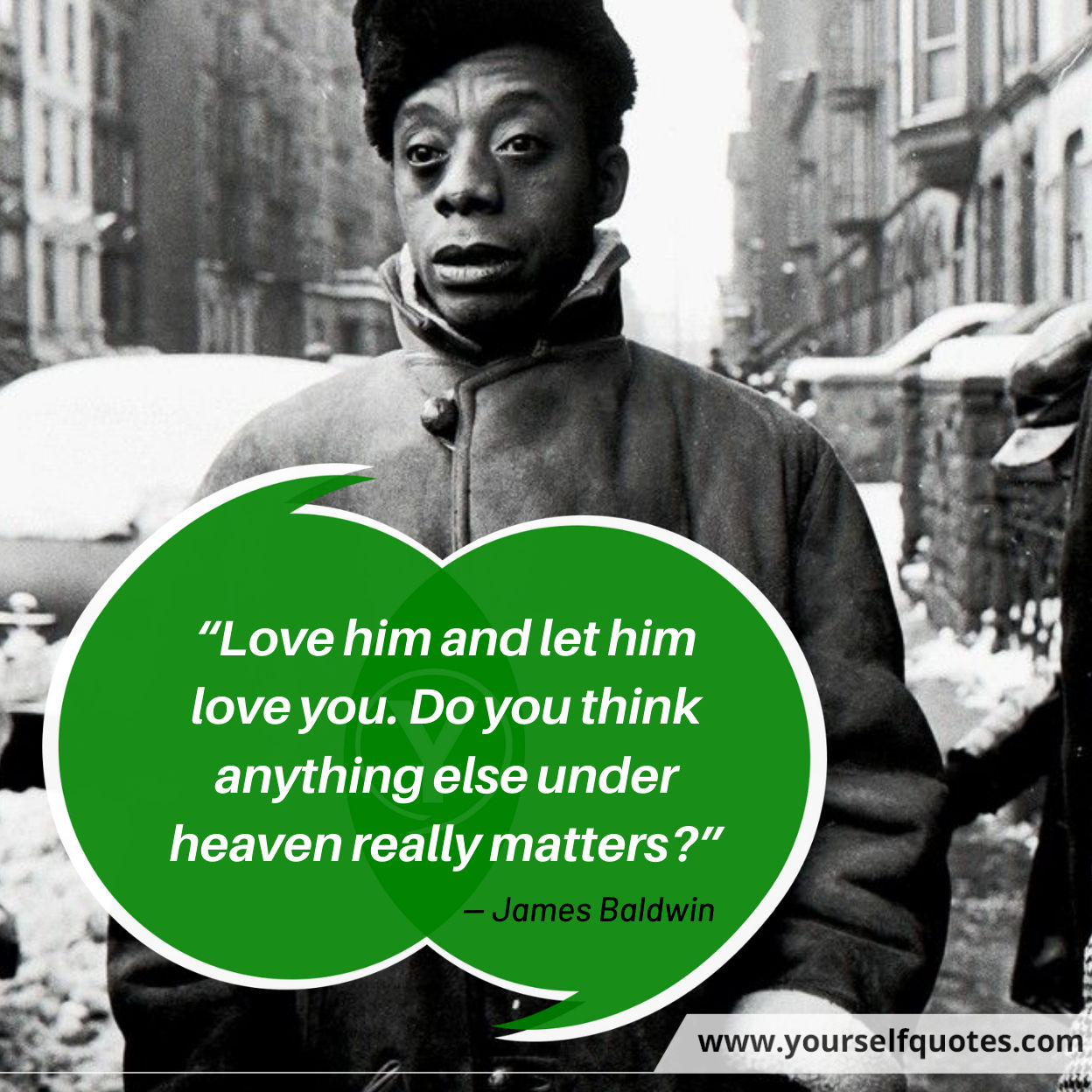 James Baldwin was an incredible essayist, playwright, and novelist. He was considered a highly insightful, iconic writer with works like The Fire Next Time and Another Country. By publishing numerous poems, short stories, and plays in the magazine, he proved his understanding of sophisticated literary devices at a very young age. Baldwin was very open and comfortable about his homosexuality and relationships with both men and women.

Baldwin died on 1st December 1987, suffering from stomach cancer in St. Paul de Vence, France. We still remember him through his spectacular work.

I hope you are impressed by knowing about this great novelist. If yes, then do share these James Baldwin Quotes with your family, friends, and dear ones.