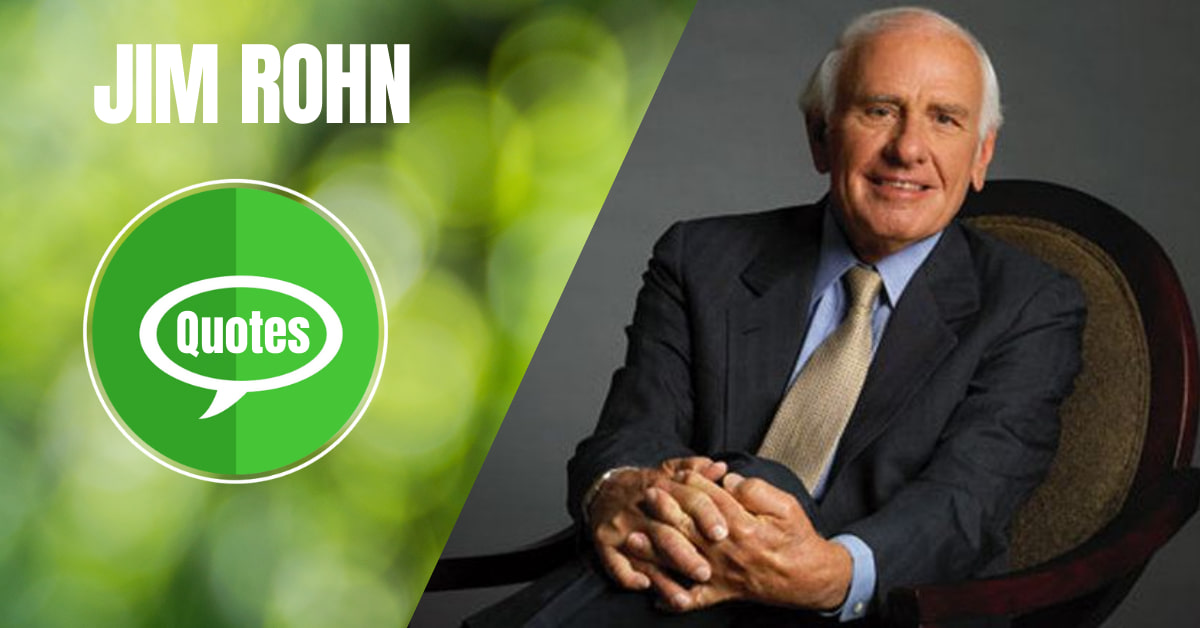 Jim Rohn, an entrepreneur, speaker, and author, inspired and won the hearts of millions during his lifetime and beyond through his speeches and books.

He lectured on the power of self-discipline for more than four decades. He was also Anthony Robbins’ mentor. Jim was 31 years old when he became a self-made millionaire and published dozens of books.

Jim Rohn, who was born on September 17, 1930, led an exemplary life as an American entrepreneur and author.

His powerful and inspiring speeches warmed the hearts of millions and sparked hope in society. Despite being dirt poor to begin with, his unwavering efforts and determination brought him great success and comfort, both financially and socially.

Rohn spent over 40 years of his life broadening the horizons of possibility with his elegantly artistic and simply ingenious design of ideas, assisting many to recognise new and wonderful things in life strategies. His eloquent speeches and unwavering intellect in all that he attempted quickly earned him fame and glory as one of America’s most philosophical minds.

His many books, as well as the audio and video programmes he sponsored, moulded the mental capabilities of all those who had the pleasure, increasing their belief in their abilities and ambitions. Everyone who followed his advice ended up in a high-level executive position at a major corporation.

He also intellectually and spiritually crafted a large number of personal development trainers in order to continue waking people up until his death on December 5, 2009.

Rohn’s life has been the most incidental since he entered the realm of self-improvement. His career helped millions of people discover who they wanted to be, and his contribution to the world in this regard is unparalleled.

As an author, entrepreneur, and millionaire who had started from the ground up, Rohn was determined to help those around him achieve their goals in life. His seminars lasted a total of 39 years, during which he addressed and influenced approximately 4 million people around the world, in a total of 6000 audiences.

The National Speakers Association presented Jim Rohn with the CPAE award in 1985. He published over 25 books as well as audio and video programmes. A true legend, he has been described as everything from a crackerjack motivator to a modern-day Will Rogers.

Jim Rohn was one of the most perceptive and astute people of his generation. Rohn achieved global acclaim by adapting more than 25 books into audio and video programmes, the most notable of which are The Art of Exceptional Living and Challenge to Succeed.

Rohn rose through the ranks, from working in a department store to becoming a distributor for a large corporation, and eventually becoming the Vice President of Nutri-Bio.

When Nutri-Bio went out of business, Rohn went into motivational speaking, and his wise quotes became some of the best in the world. Jim died in 2009, but we are fortunate to have inherited much of his great wisdom.

Here are some of Jim Rohn’s Quotes based on personal development:

“You are the average of the five people you spend the most time with.” ― Jim Rohn 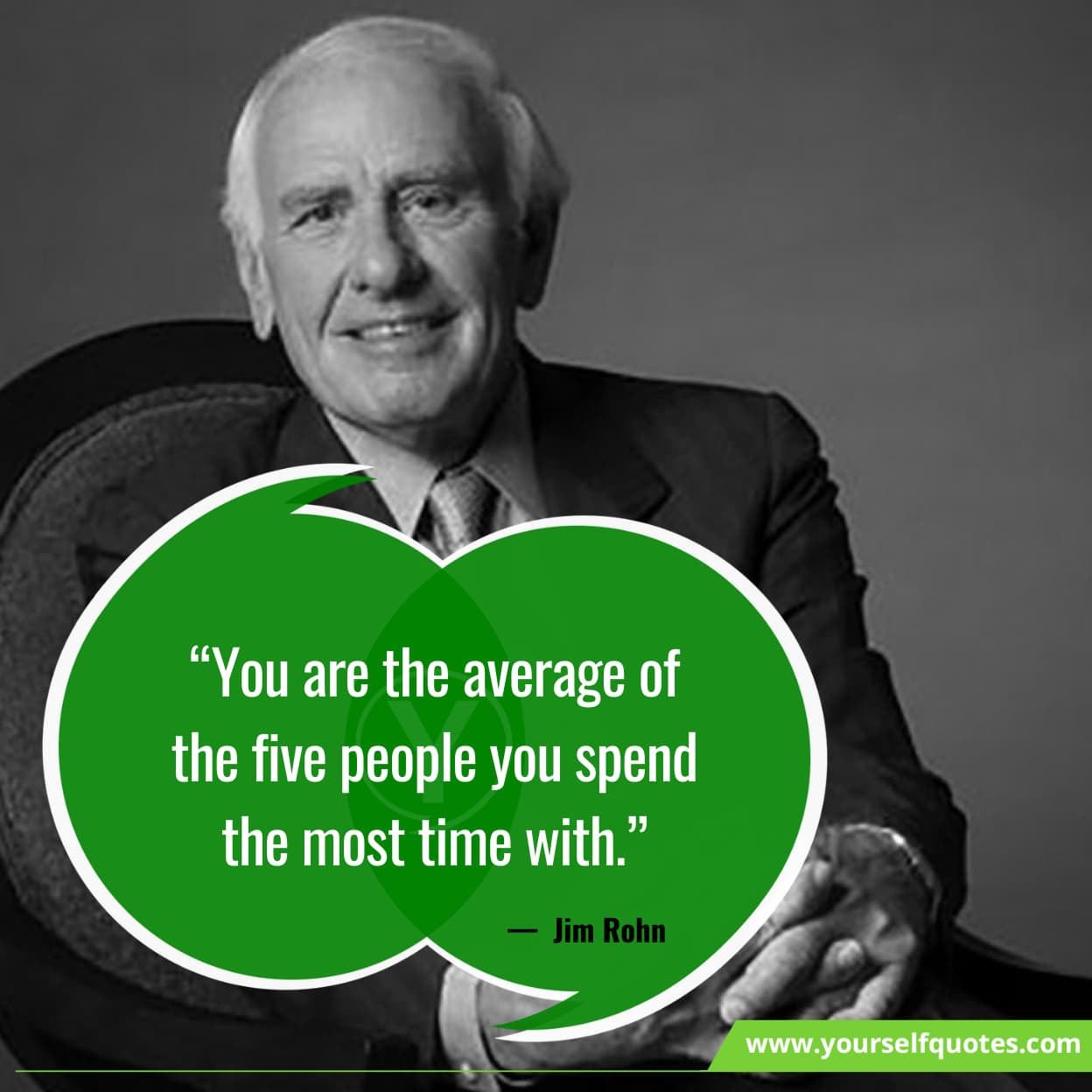 “Motivation is what gets you started. Habit is what keeps you going.” ― Jim Rohn

“Start from wherever you are and with whatever you’ve got.” ― Jim Rohn

“We must all suffer from one of two pains: the pain of discipline or the pain of regret. The difference is discipline weighs ounces while regret weighs tons.” ― Jim Rohn

“Discipline is the bridge between goals and accomplishment.” ― Jim Rohn

“We must all suffer one of two things: the pain of discipline or the pain of regret or disappointment. ” ― Jim Rohn 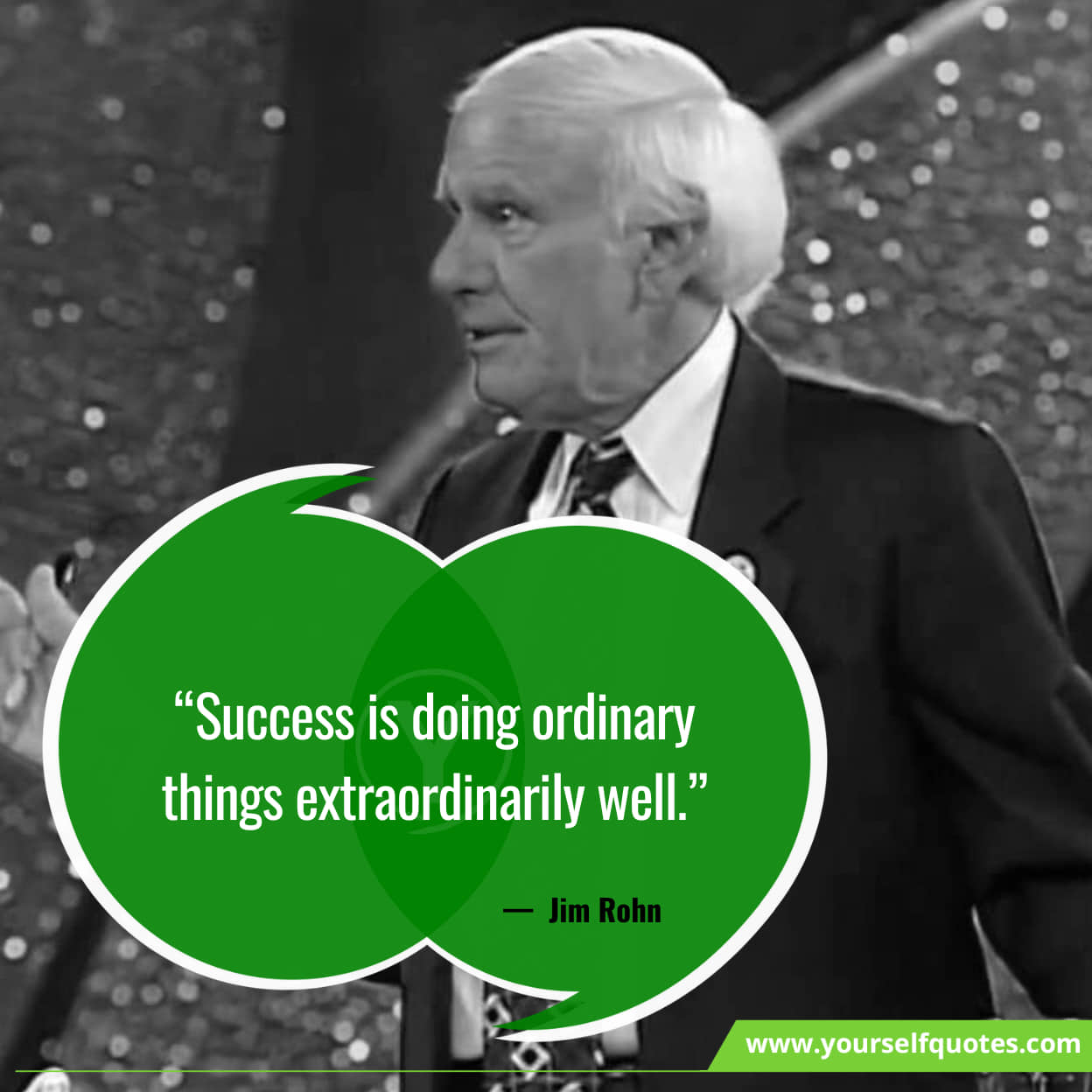 “Excuses are the nails used to build a house of failure. ― Jim Rohn

“There are two types of pain you will go through in life, the pain of discipline and the pain of regret. Discipline weighs ounces while regret weighs tonnes.” ― Jim Rohn

“Happiness is not by chance, but by choice.” ― Jim Rohn

“Success is nothing more than a few simple disciplines, practiced every day.” ― Jim Rohn

“Days are expensive. When you spend a day you have one less day to spend. So make sure you spend each one wisely.” ― Jim Rohn

“Give whatever you are doing and whoever you are with the gift of your attention.” ― Jim Rohn

“Learn how to be happy with what you have while you pursue all that you want.” ― Jim Rohn

“No one else ‘makes us angry.’ We make ourselves angry when we surrender control of our attitude.” ― Jim Rohn

“Your personal philosophy is the greatest determining factor in how your life works out.” ― Jim Rohn

“Success is nothing more than a few simple disciplines, practiced every day.” ― Jim Rohn 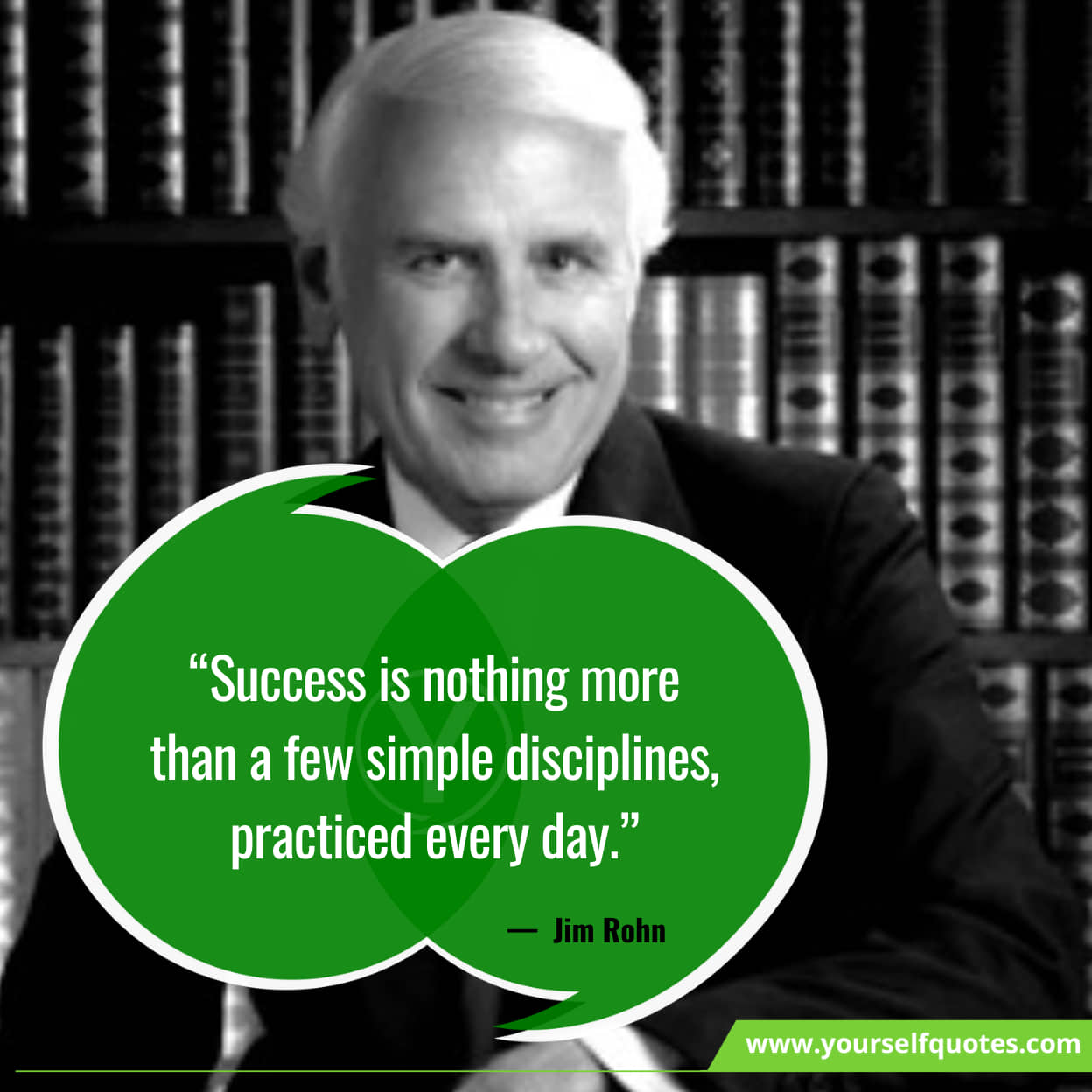 “Learn how to be happy with what you have while you pursue all that you want.” ― Jim Rohn

“If you don’t design your own life plan, chances are you’ll fall into someone else’s plan. And guess what they have planed for you? Not much.” ― Jim Rohn

“When you know what you want, and you want it bad enough, you’ll find a way to get it.” ― Jim Rohn

“You must take personal responsibility. You cannot change the circumstances, the seasons, or the wind, but you can change yourself. That is something you have charge of.” ― Jim Rohn

“Work harder on yourself than you do on your job.” ― Jim Rohn

“Discipline is the bridge between goals and accomplishment.” ― Jim Rohn 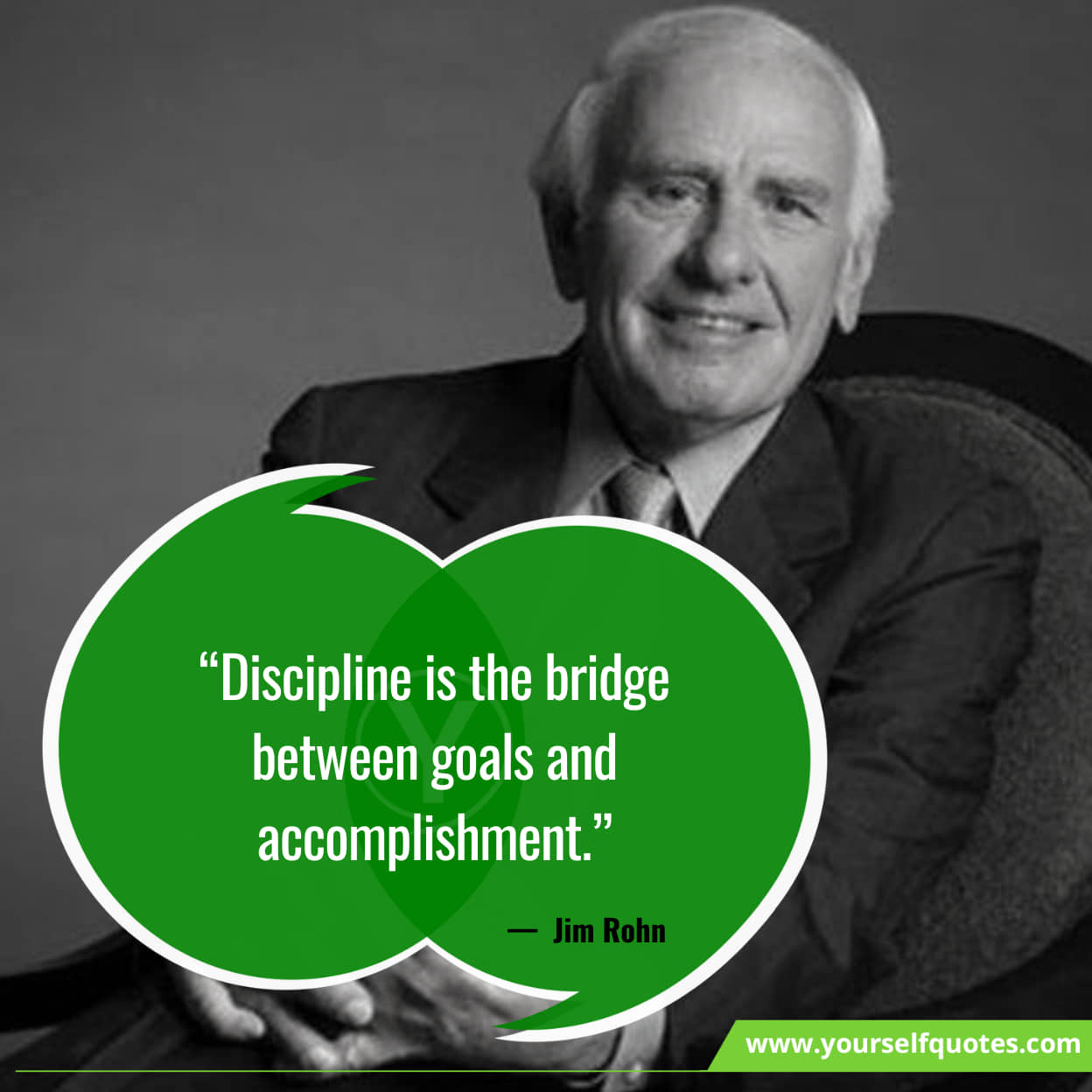 “Work harder on yourself than you do on your job.” ― Jim Rohn

“Don’t just read the easy stuff. You may be entertained by it, but you will never grow from it.” ― Jim Rohn

“We must all suffer one of two things: the pain of discipline or the pain of regret or disappointment.” ― Jim Rohn

“Without a sense of urgency, desire loses its value.” ― Jim Rohn

“Take advantage of every opportunity to practice your communication skills so that when important occasions arise, you will have the gift, the style, the sharpness, the clarity, and the emotions to affect other people.” ― Jim Rohn 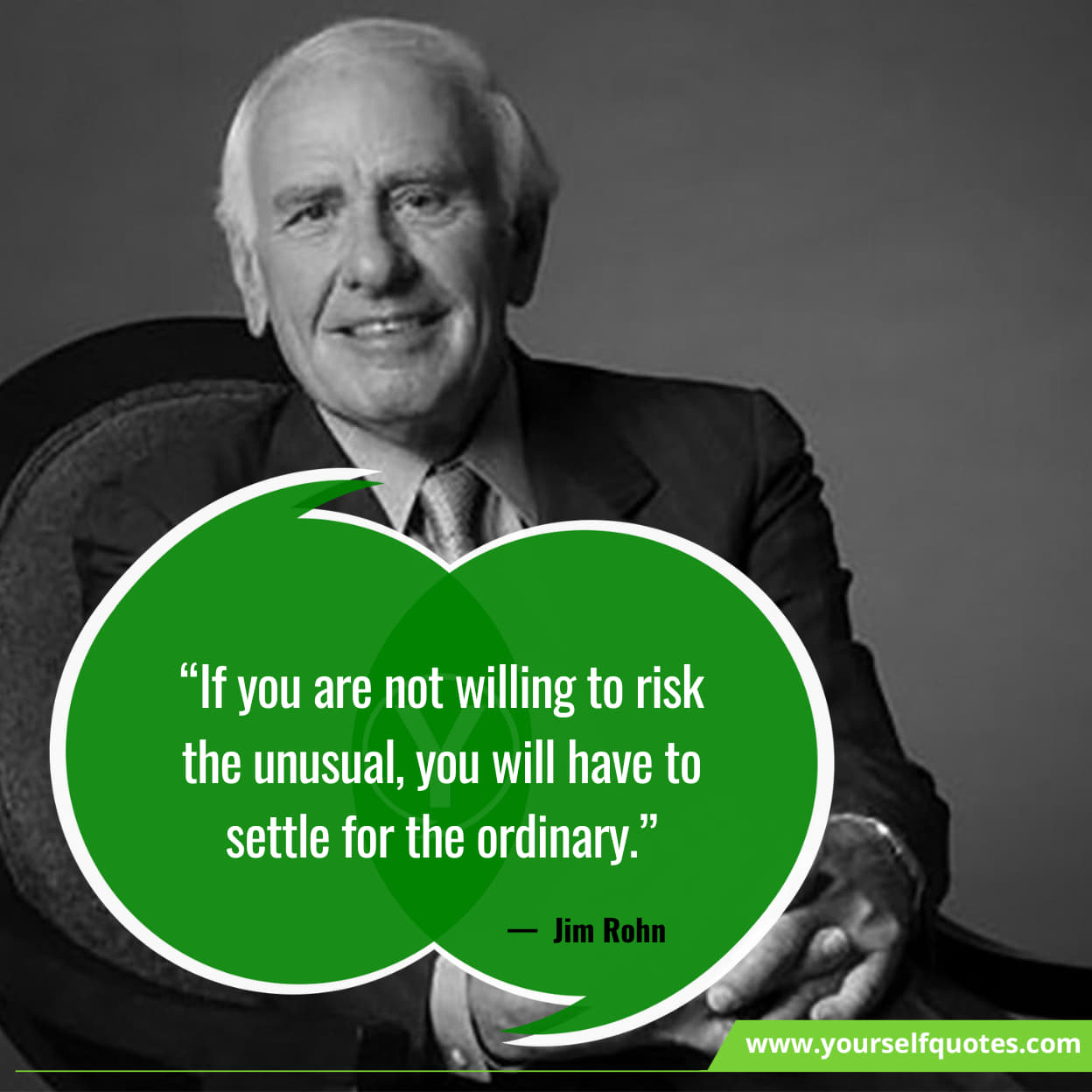 “Either you run the day or the day runs you.” ― Jim Rohn

“We must all wage an intense, lifelong battle against the constant downward pull. If we relax, the bugs and weeds of negativity will move into the garden and take away everything of value.” ― Jim Rohn

“Motivation is what gets you started. Habit is what keeps you going.” ― Jim Rohn

“To solve any problem, here are three questions to ask yourself: First, what could I do? Second, what could I read? And third, who could I ask?” ― Jim Rohn

“Motivation alone is not enough. If you have an idiot and you motivate him, now you have a motivated idiot.”

“It isn’t what the book costs; it’s what it will cost you if you don’t read it.” ― Jim Rohn

“You must take personal responsibility. You cannot change the circumstances, the seasons, or the wind, but you can change yourself. That is something you have charge of.” ― Jim Rohn

“Failure is not a single, cataclysmic event. You don’t fail overnight. Instead, failure is a few errors in judgement, repeated every day.” ― Jim Rohn

“Success is neither magical nor mysterious. Success is the natural consequence of consistently applying the fundamentals.” ― Jim Rohn 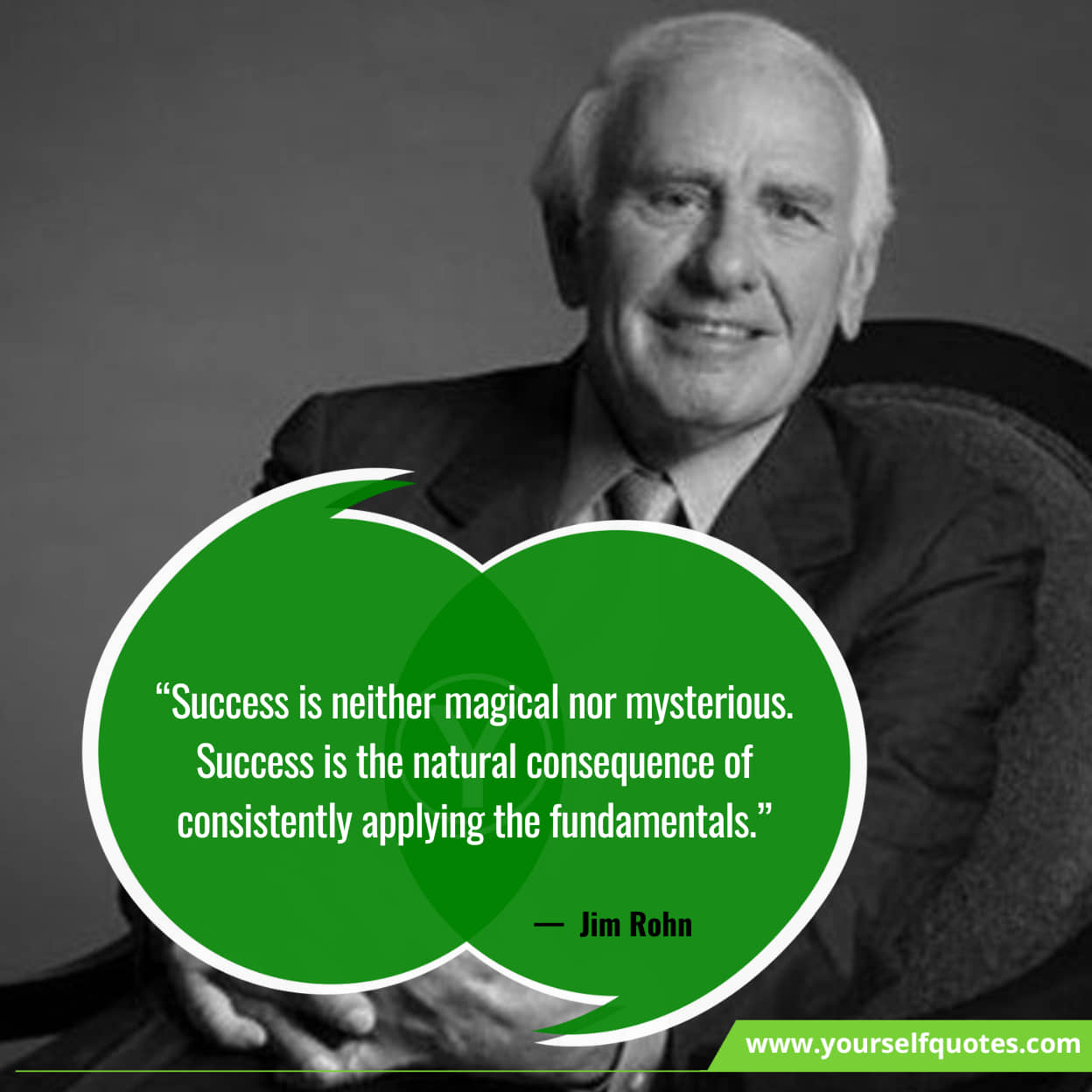 Jim Rohn was a well-known entrepreneur who rose from rags to riches.

Jim Rohn began his life as a dirt poor farm boy from Idaho who dropped out of college. When he met Shoaff, he realised he could reach for the stars and demonstrate that he could actually achieve his dreams.

His story of becoming a millionaire six years after going bankrupt was inspiring to all who heard it. His brilliant story-telling abilities and lessons waiting inside him to be taught to the world earned him global acclaim and aided in the recovery of millions of people who were lost in broad daylight.

The minds he has influenced appease him and continue to follow him to this day. He is no longer with us, but he will never be forgotten, and the legacy he has left behind has been taken up by his students.

Thank you for taking the time to read this collection of Jim Rohn quotes! Remember to share them on social media.

Which are your favorite Jim Rohn Quotes? Leave a comment below.

Good Afternoon Messages for Her