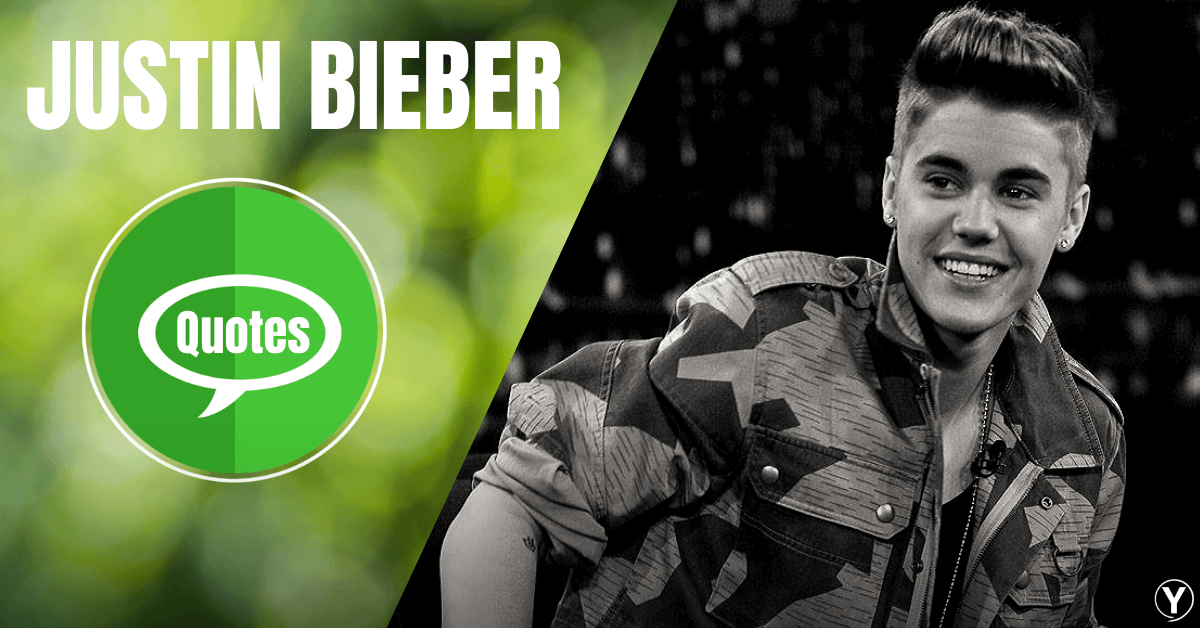 Justin Drew Bieber, popularly known as Justin Bieber is a well-known Canadian singer, songwriter, and actor. His talent was discovered at a very young age of 13 years by a talent manager through his song videos on YouTube. And later the singer turned into a YouTube phenomenon. He holds the record contract with Usher and is the first solo singer to have four singles enter the Top 40 before the release of a debut album. Justin lives and works in Atlanta.

In 2007, Scooter Braun, a former marketing executive of  So So Def Recordings, found one of Bieber’s YouTube videos by accident and was highly impressed by it. At that time Justin was 13 years, he went to Atlanta with Braun to record demo tapes. And one week later Justin began to sing for Usher.

In 2008, he was signed to RBMG Records. Later in 2009, his first debut album was released, “EP, My World”. This was certified in the United States. And with this album, Bieber became the first artist to have seven songs from a debut record chart on the US Billboard Hot 100. Then after, Justin continued to rise up the ladder of success. He came up with many successful albums such as Under the Mistletoe, Believe, Purpose, Despairs (Remix), and many others.

Justin greatly supports Pencils of Promise, a charity which was founded by Adam Braun, the younger brother of Bieber’s manager. This organization builds schools in developing countries, and Bieber became a manager for the organization’s campaign in Guatemala. Justin serves as a celebrity spokesman for the organization. He also supports Children’s Miracle Network Hospitals and Alzheimer’s Association.

Justin is a very creative personality to know about. So now let’s go through some of the best musical Justin Bieber Quote.

“No matter how much I try, I can’t figure out how to not be adorable!” — Justin Bieber 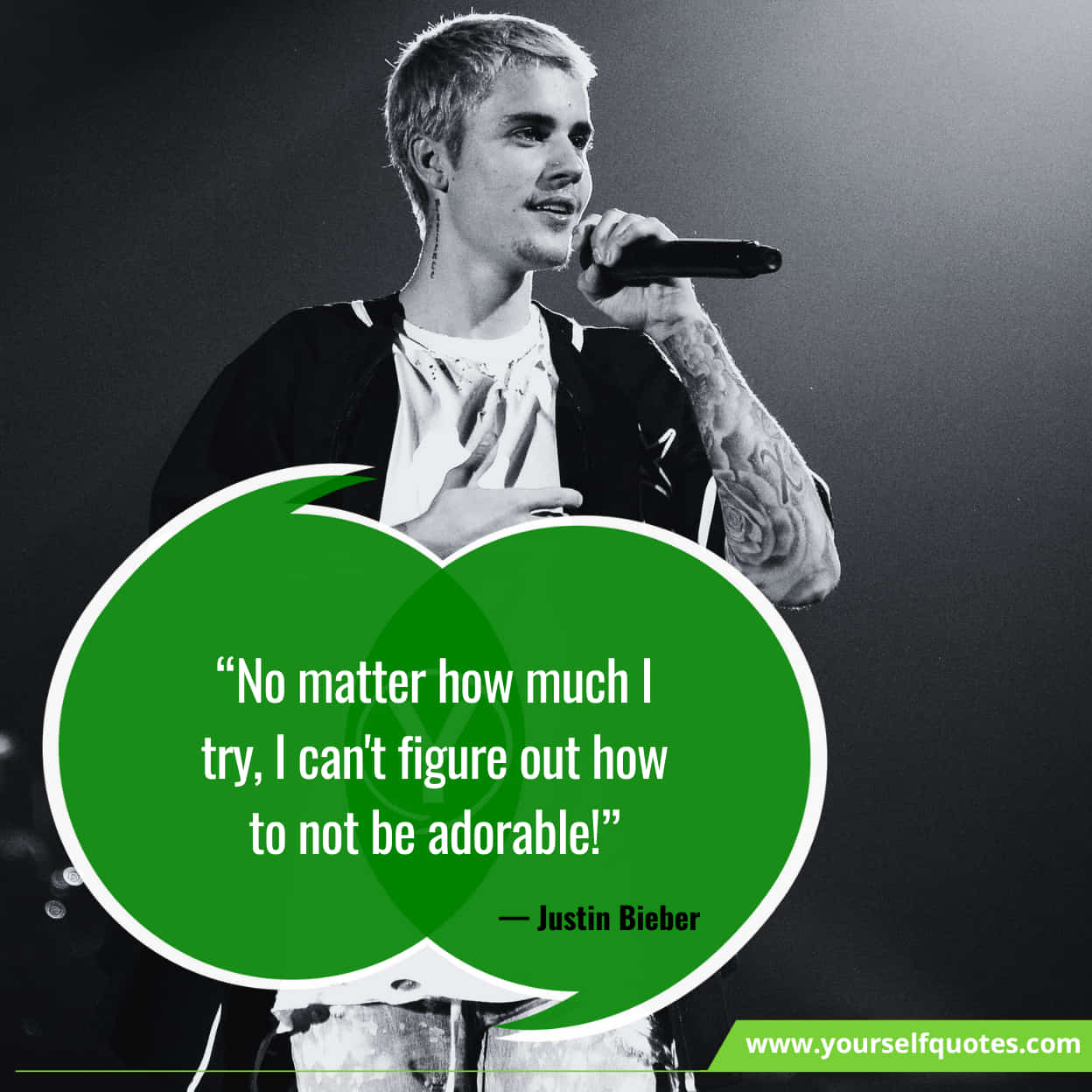 “I’m looking forward to influencing others in a positive way. My message is you can do anything if you just put your mind to it.” — Justin Bieber

“Young people in the business have grown up and made the wrong decisions, or bad decisions, and haven’t been good role models. To be someone that people look up to is important to me.” — Justin Bieber

“I know who I am and what I’m doing in my life and what I’ve accomplished and continue to accomplish as a performer, as a writer, as an artist, as a person, as a human being.” — Justin Bieber

“God’s timing really is literally perfect, we got engaged on the seventh day of the seventh month, the number seven is the number of spiritual perfection, it’s true to GOOGLE IT!” — Justin Bieber

“Are you curious about cutting off your finger? Do you want to know what that feels like? To me, taking drugs is the same type of thing. In the end, all that happens is you get hurt by it.” — Justin Bieber

“It’s kind of hard to balance school and work sometimes. But sometimes, like, if I’m going to the White House and I’m in there doing a tour and stuff, that’s like school.” — Justin Bieber

“If you start taking yourself more seriously than you do God then there’s a problem.” — Justin Bieber 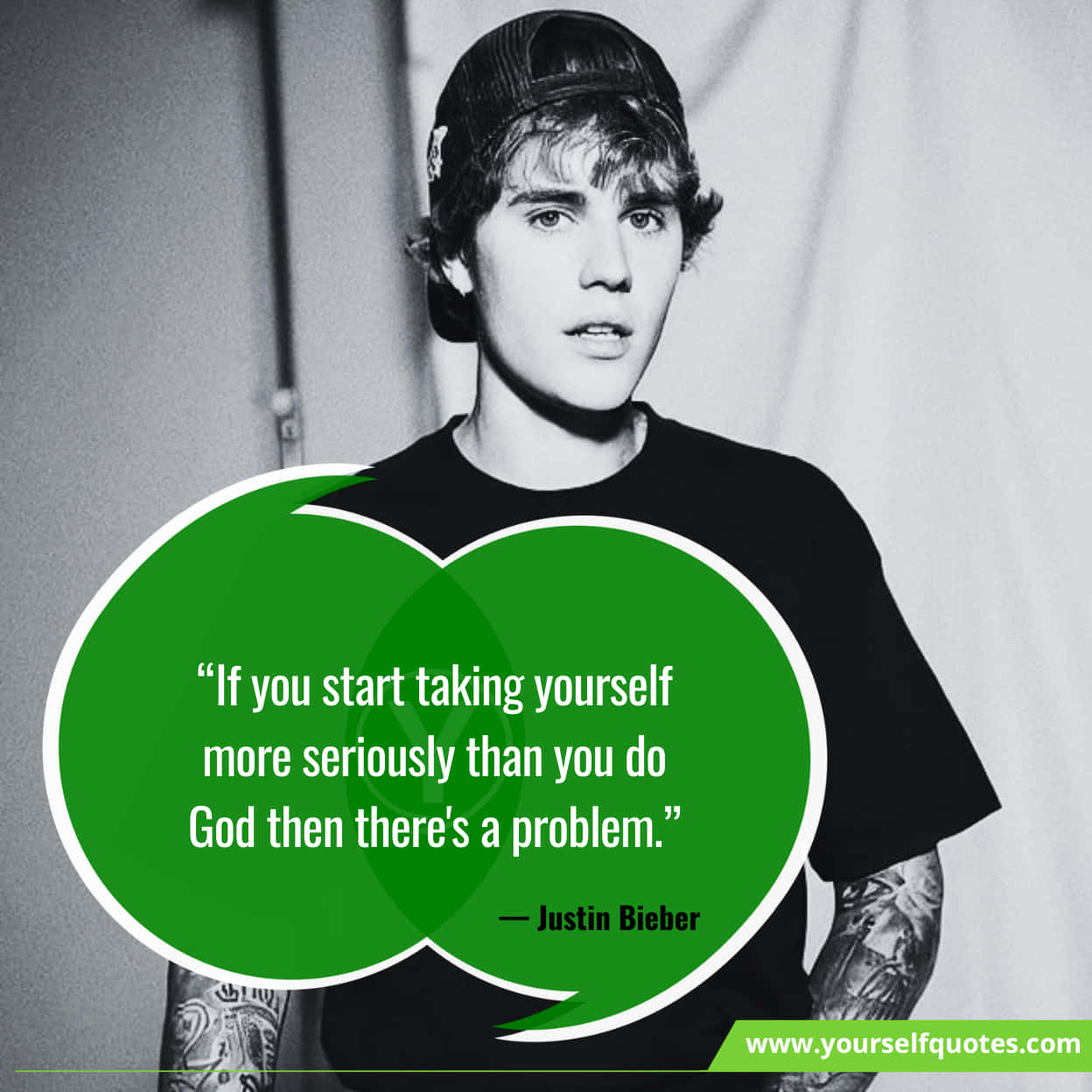 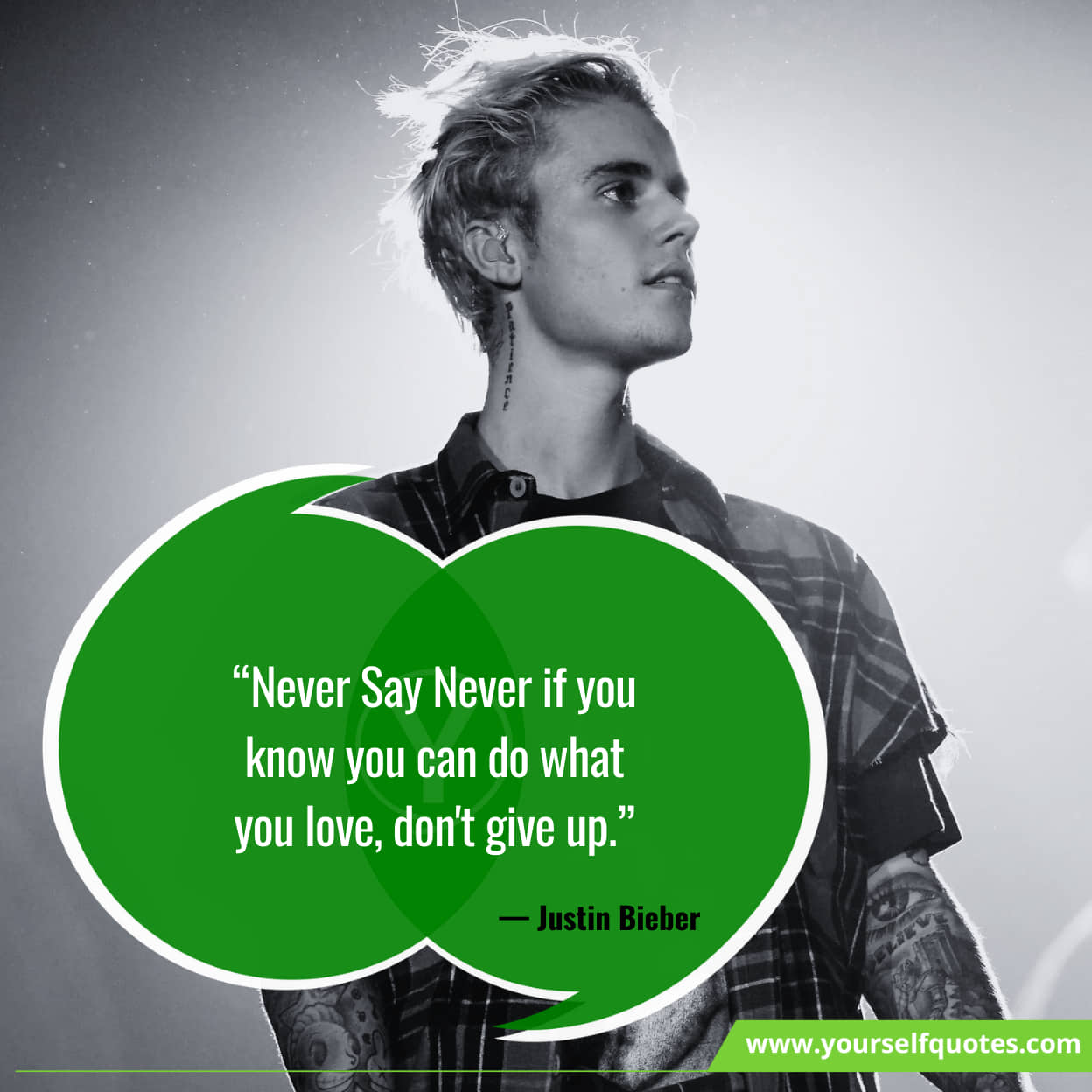 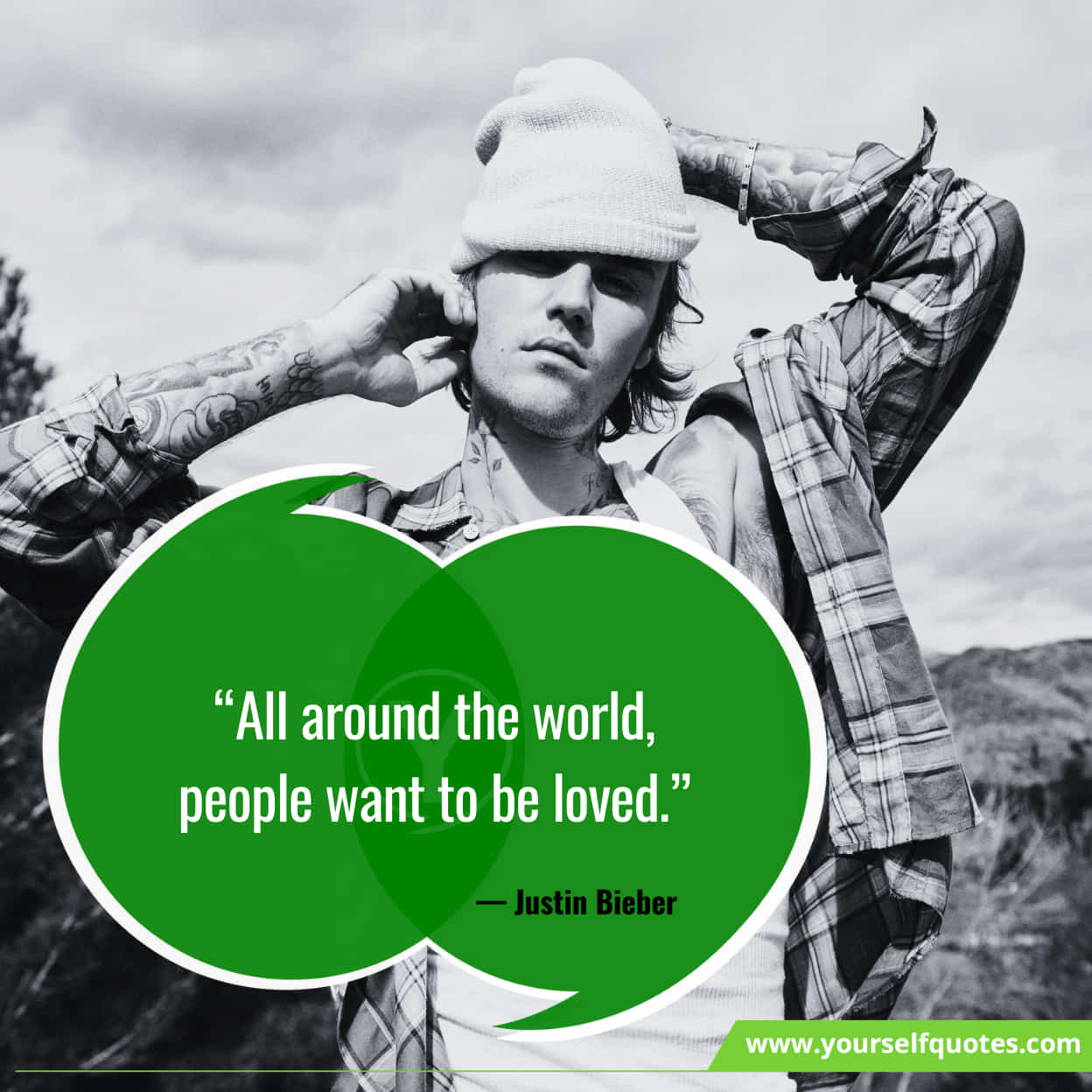 “Music is my passion so I feel like I’ll be doing this for a long time and God forbid if anything happens I’ll still write music.” — Justin Bieber 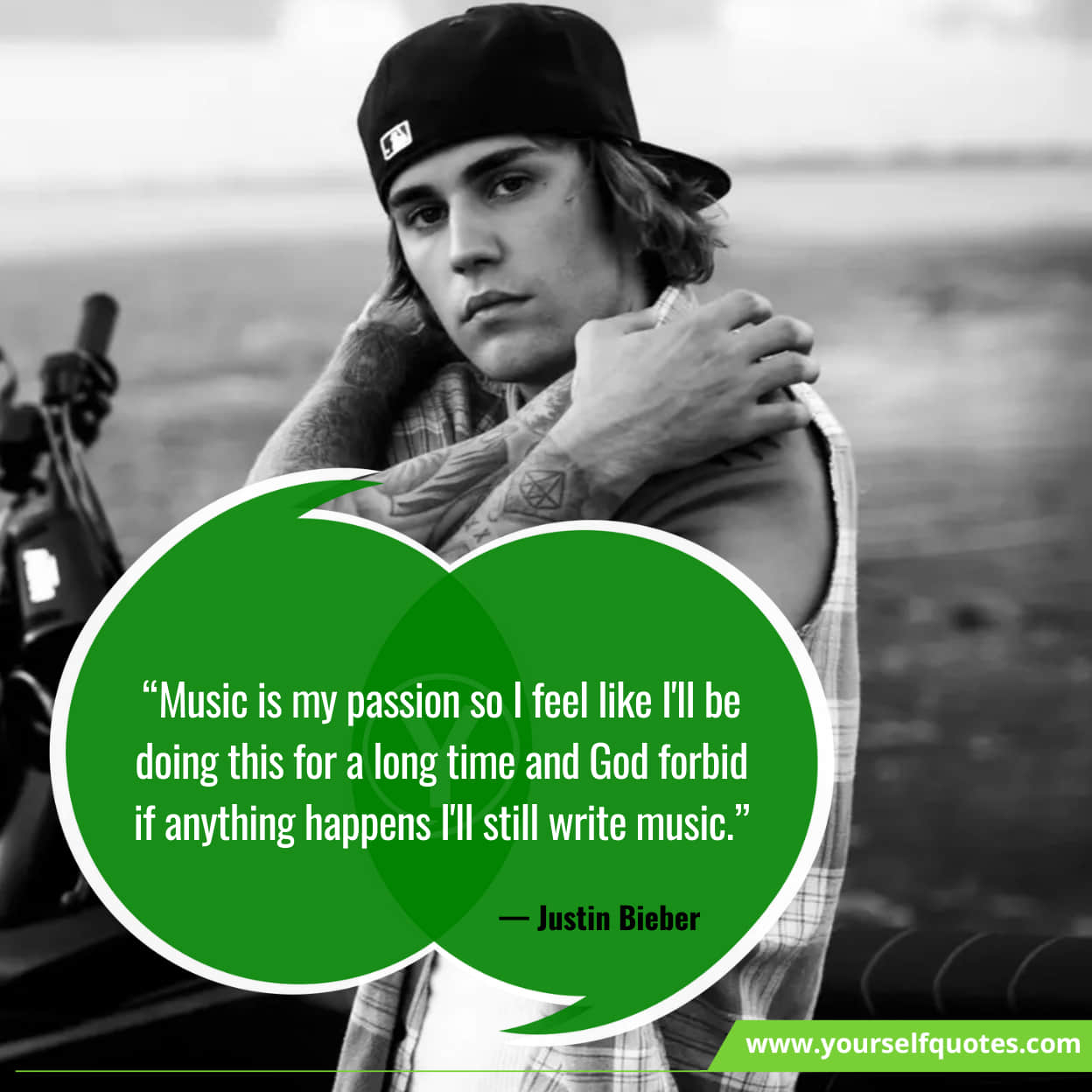 “Haters will say what they want, but their hate will never stop you from chasing your dream.” — Justin Bieber

“I’m not a fighter by nature, but, if I believe in something, I stand up for it.” — Justin Bieber

“I’m telling you, people. Every day we wake up is another blessing. Follow your dreams and don’t let anyone stop you. Never say never.” — Justin Bieber

“There’s gonna be times when people tell you that you can’t live your dreams, this is what I tell them, Never Say Never.” — Justin Bieber

“If I can do just one-tenth of the good Michael Jackson did for others, I can really make a difference in this world.” — Justin Bieber

“When life pushes you down on your knees, you’re in the perfect position to pray.” — Justin Bieber 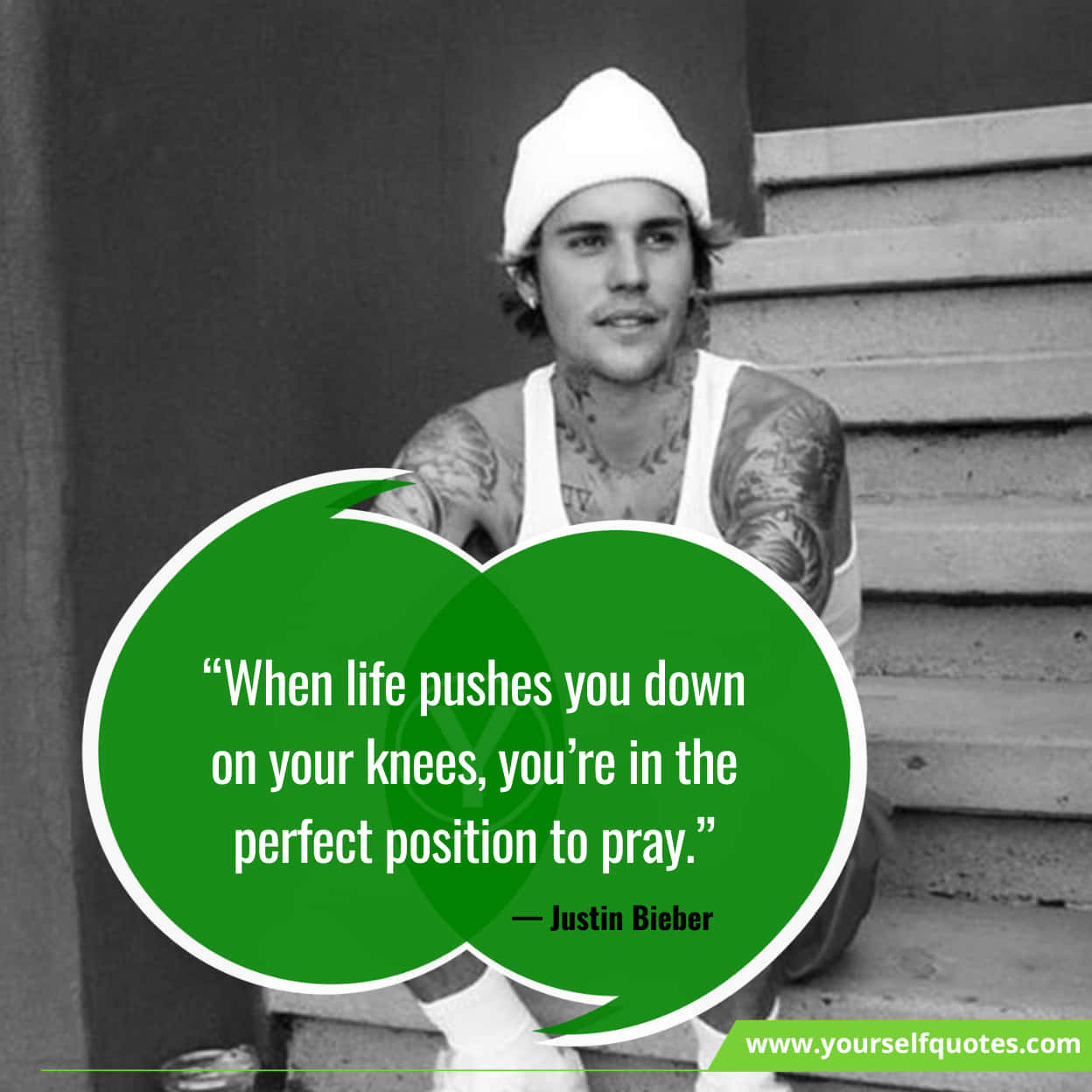 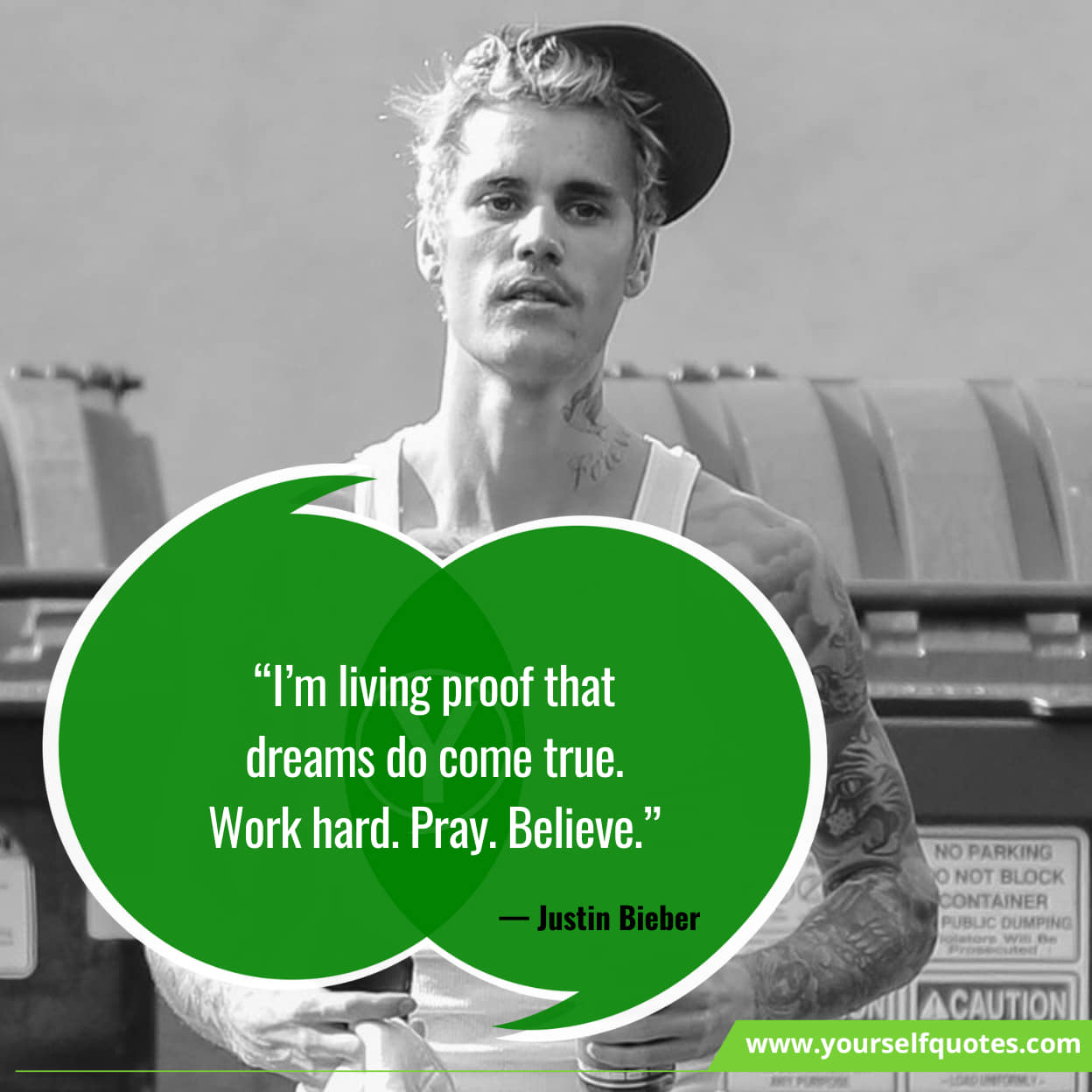 “I’m looking forward to influencing others in a positive way. My message is you can do anything if you just put your mind to it.” — Justin Bieber

“I’m not going to say I’m sorry for the things that I’ve done because I think that it allows me to tell a story.” — Justin Bieber

“I make mistakes growing up. I’m not perfect; I’m not a robot.” — Justin Bieber

“I grew up below the poverty line; I didn’t have as much as other people did, I think it made me stronger as a person, it built my character. ” — Justin Bieber

“I’m here to bless, not to impress.” — Justin Bieber

“I just get so happy when I think about the fact that I get to do what I love every day as a job.” — Justin Bieber

“The success I’ve achieved comes to me from God.” — Justin Bieber

“I’m not hiding from anyone. I am who I am, and I’m not perfect.” — Justin Bieber

“I know who I am and what I’m doing in my life and what I’ve accomplished and continue to accomplish as a performer, as a writer, as an artist, as a person, as a human being.” — Justin Bieber

“Stay positive. Stay strong and learn to be better and always live to serve others and The Lord.” — Justin Bieber 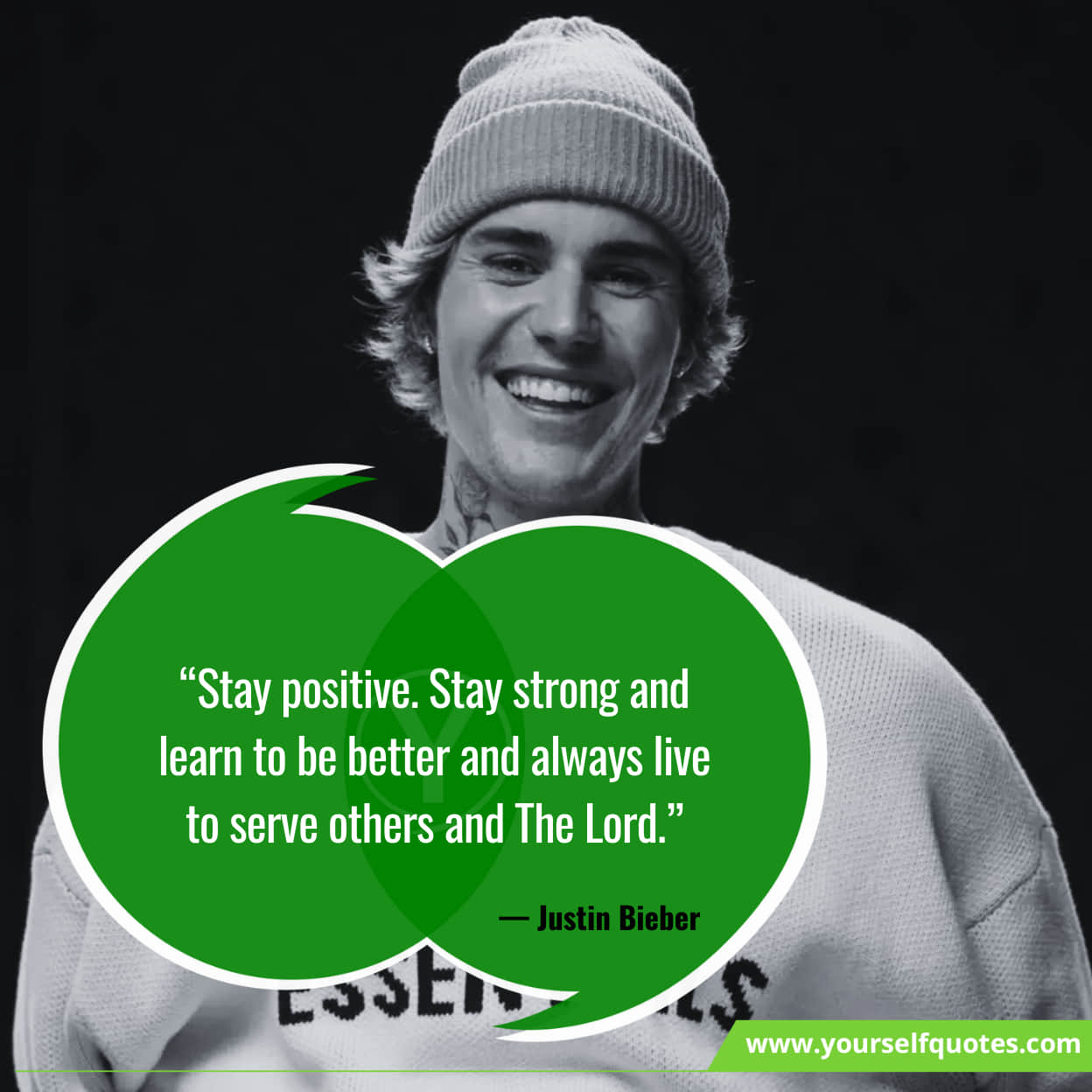 “You should not be afraid of doing what your mind tells you to do… just listen to your heart… never say never. ” — Justin Bieber

“Never say never. If you know you can do what you love, don’t give up.” — Justin Bieber

“Of course, I think that people are just waiting for that time when I make a mistake and they’re gonna jump on it. There’s gonna be haters.” — Justin Bieber

“I think older people can appreciate my music because I really show my heart when I sing, and it’s not corny. I think I can grow as an artist, and my fans will grow with me.” — Justin Bieber

“As I get into it more, I want to grow as an artist, as an entertainer, and basically perfect my craft.” — Justin Bieber

“I think love is like a learning process throughout your life. You learn how to be better at it and you learn more about it.” — Justin Bieber

“If my girlfriend and I were fighting, and it got to the point where she started crying, I would just shut up and hold her.” — Justin Bieber 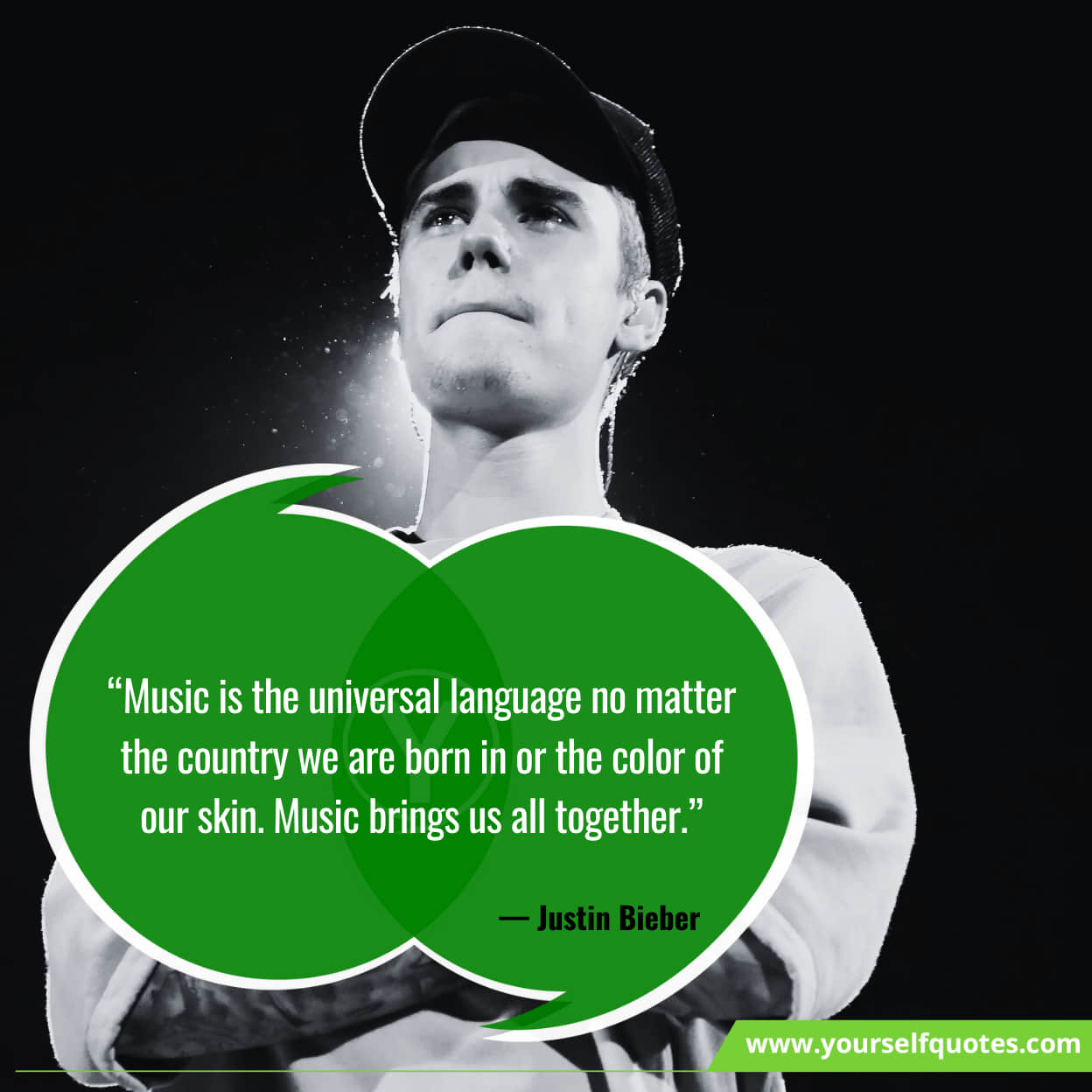 Justin Bieber is a Canadian-born singer, songwriter and well-known actor. He has won several awards throughout his career. He bagged with an American Music Award for Artist of the Year in 2010 and 2012, a Grammy Award for Best Dance Recording for the song “Where Are Ü Now”, and a Latin Grammy Award. Forbes magazine listed him among the top ten most powerful celebrities in the world, in 2011, 2012, and 2013. Bieber was highly influenced and inspired by the musical style of Michael Jackson, The Beatles, Boyz II Men, Mariah Carey, Justin Timberlake, Stevie Wonder, Tupac, and Usher.

Justin Bieber always entertains his audience with his stunning performance and outstanding rocking albums. If you are also entertained and are a die-hard fan of this personality, then do share these Justin Bieber Quote Images with your family, friends, and loved ones.

Which are your favorite Justin Bieber Quotes? Leave a comment below.

How to Be A Good Girlfriend – The Best One He Can Ever Have!