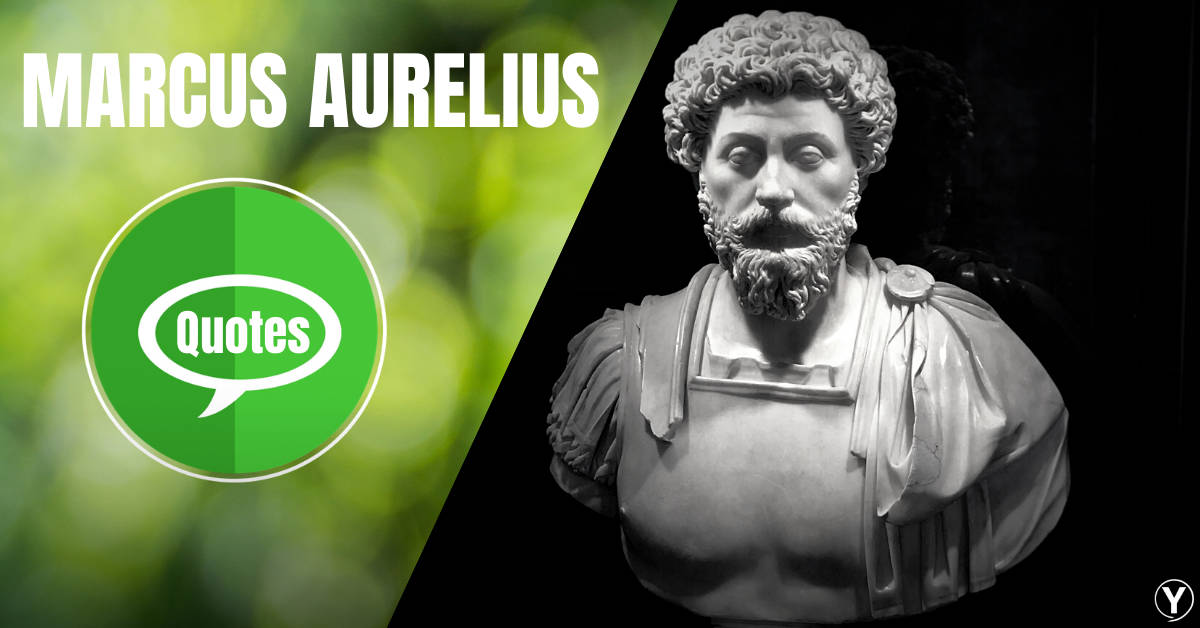 Under tutors like Herodes Atticus and Marcus Cornelius Fronto, Marcus studied Greek and Latin. Over several years after that, he stayed in close contact with Fronto. Marcus was to consider his greatest academic focus in psychology, as well as his moral nourishment.

In 145 AD he married his cousin, the emperor’s daughter Annia Galeria Faustina, and in 147 AD were conferred upon him the imperium and tribunician potestas, the principal formal powers of emperorship; henceforth he was a sort of junior co-emperor, sharing Antoninus’ intimate counsel and crucial decisions.

Reading The Meditations will gain a more personal connection with the thoughts sought by Marcus during his reign ‘s disturbing involvements, but not what should have been historically most important, his day-to-day political thinking.

To what extent he intended them for eyes other than his own is uncertain; they are fragmentary notes of his reflections in the midst of campaigning and administration, discursive and epigrammatic by turn. He wrote them in a way, it seems, to nerve himself for his daunting duties.

Marcus was constantly proposing to himself unattainable aims of behavior, considering for all the triviality, cruelty, and transience of the real universe and of humanity in general and of himself in particular; otherwise, but trusting in no other existence, he was thus committed to duty and service without expectation, also of everlasting glory, to preserve him.

It is not clear how extensively Marcus’ writings after his death were circulated. There are scattered references to the prominence of his precepts in the ancient literature, and Julian the Apostate was well aware of his prestige as a philosopher although he did not explicitly mention Meditations.

His words are exceptional and proved to be leading for many. So let’s explore some of the most intellectual Marcus Aurelius Quotes.

“The more we value things outside our control, the less control we have.” — Marcus Aurelius 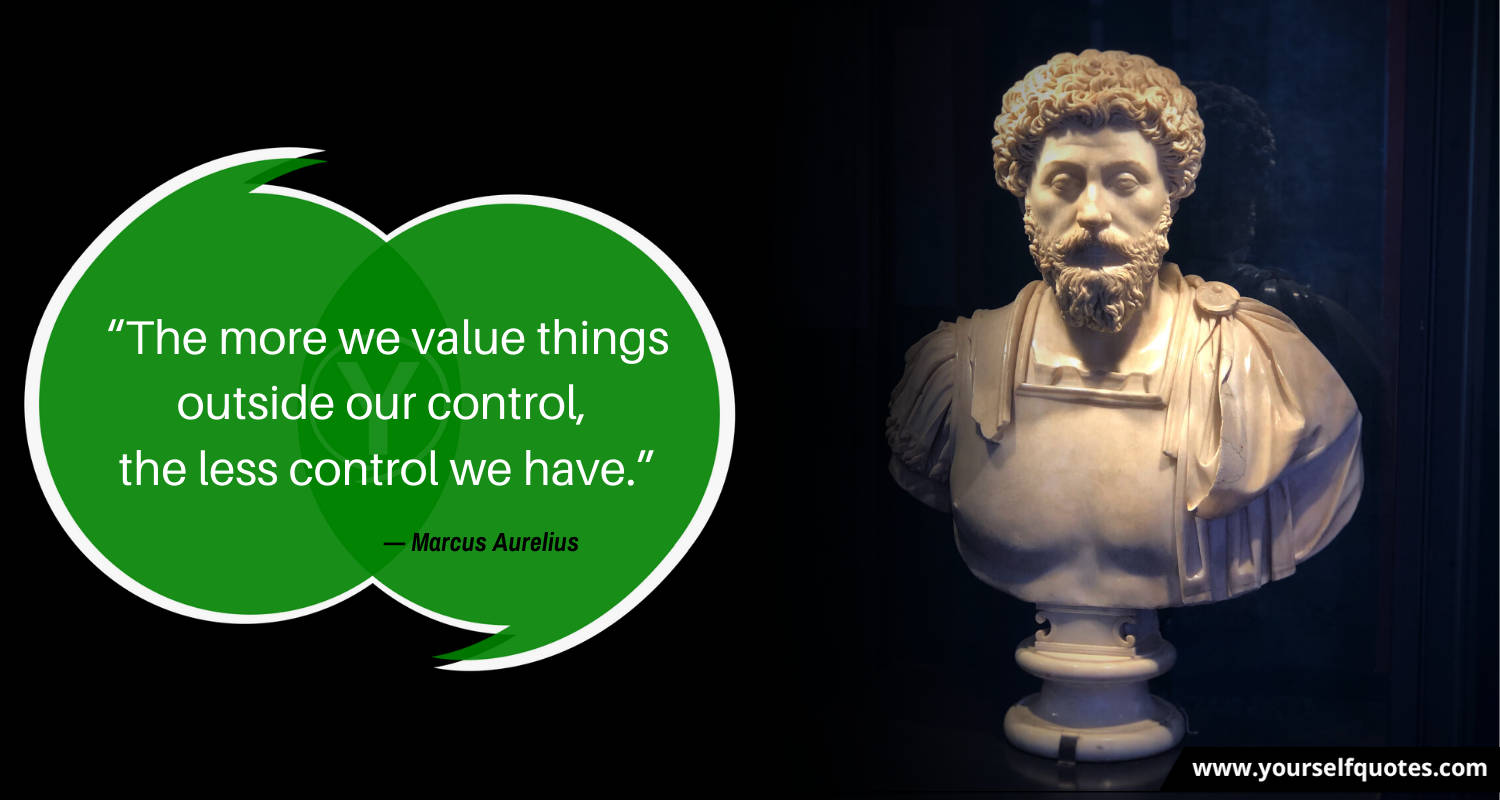 “It is not events that disturb people, it is their judgements concerning them.” — Marcus Aurelius 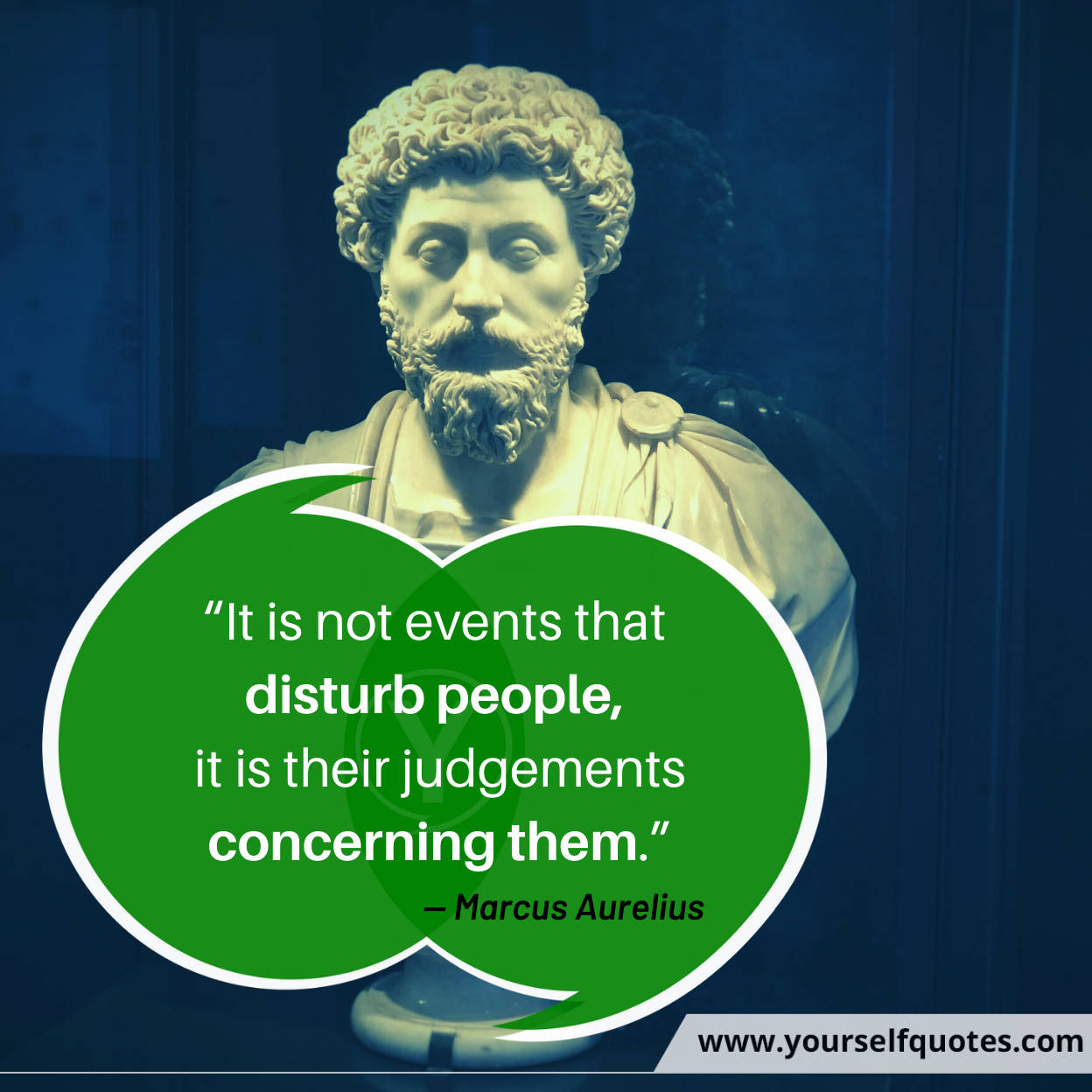 “The soul becomes dyed with the color of its thoughts.” — Marcus Aurelius 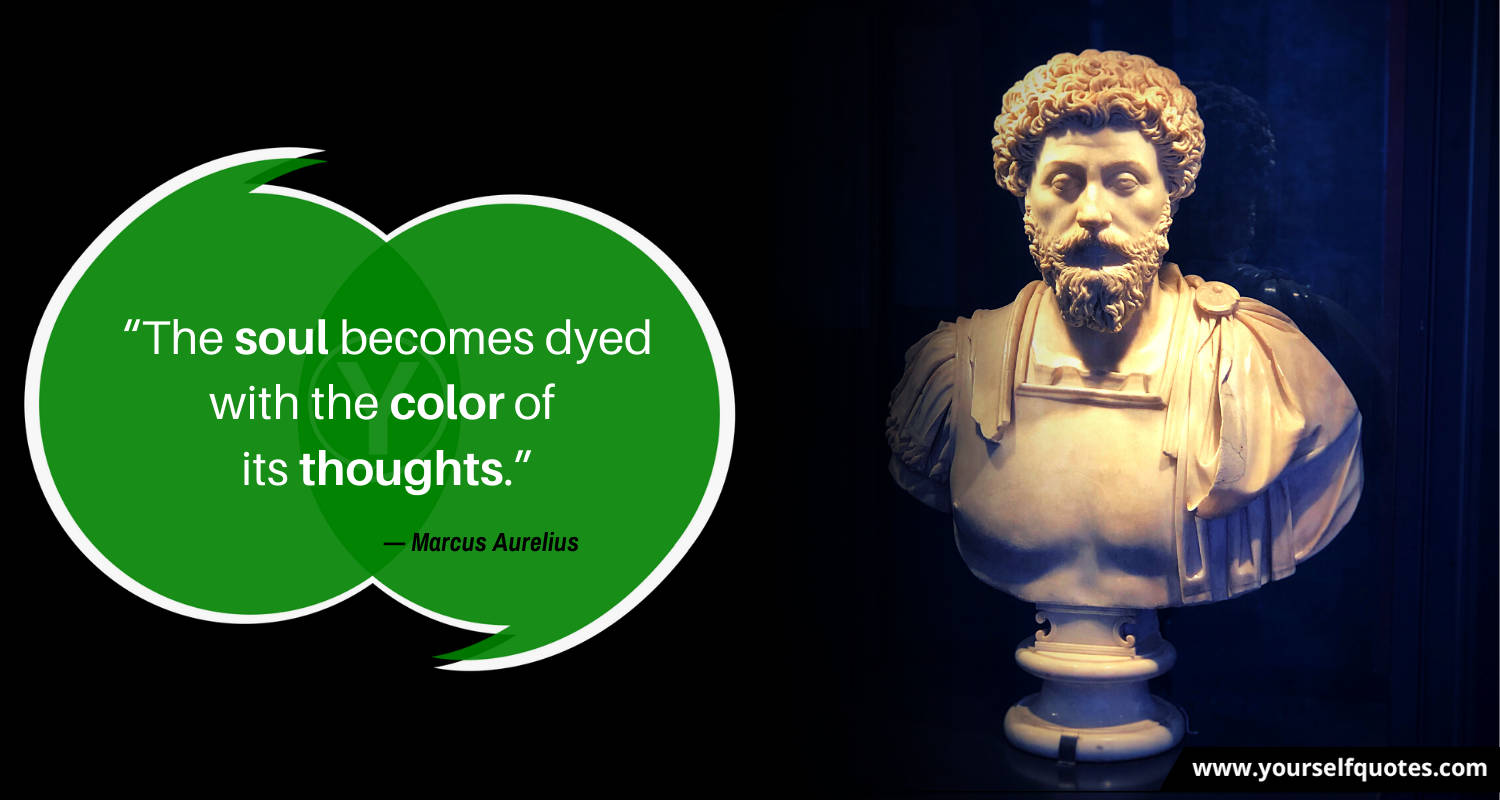 “A rock is thrown in the air. It loses nothing by coming down, gained nothing by going up.” — Marcus Aurelius 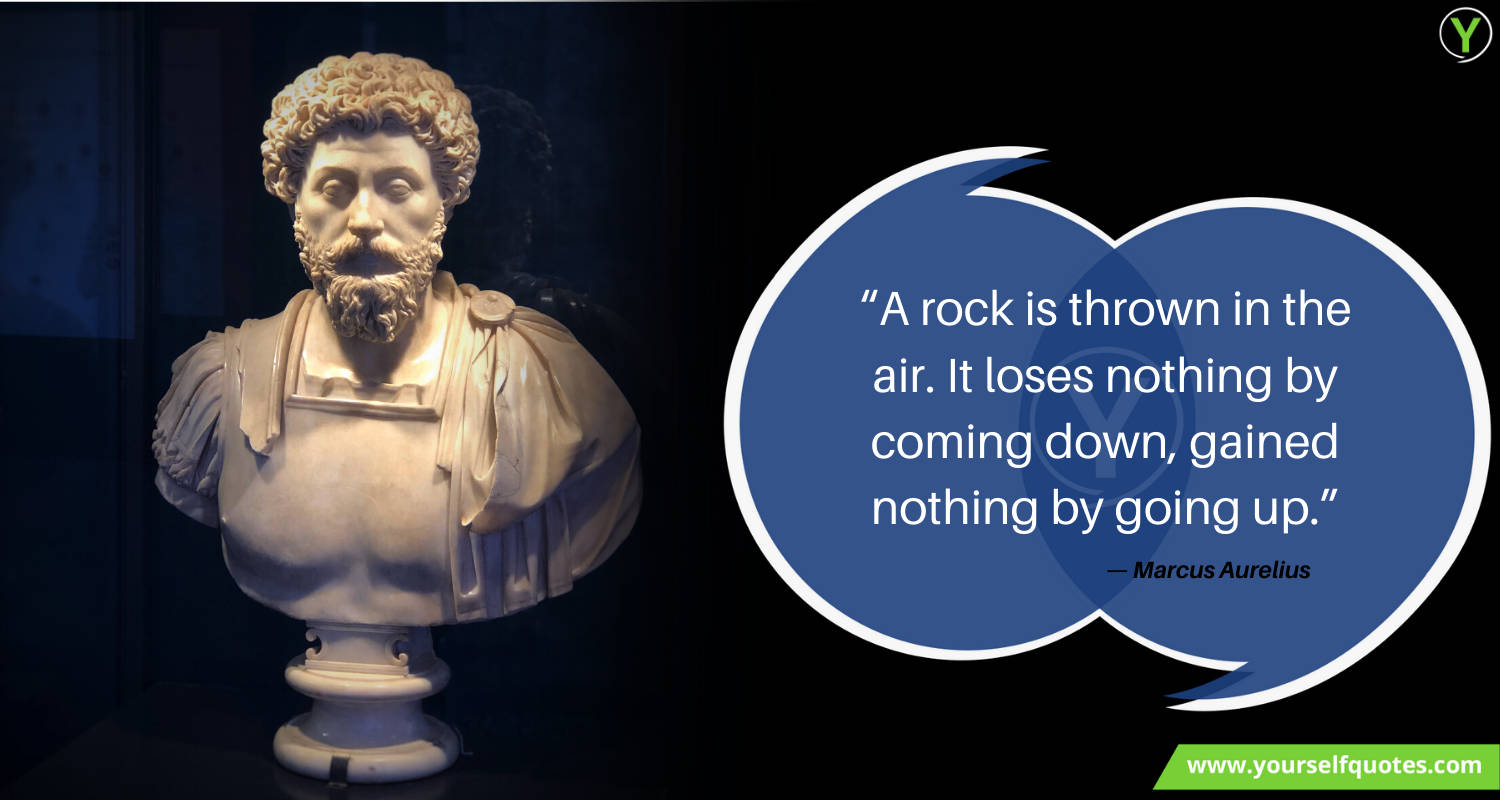 “Let not your mind run on what you lack as much as on what you have already.” — Marcus Aurelius 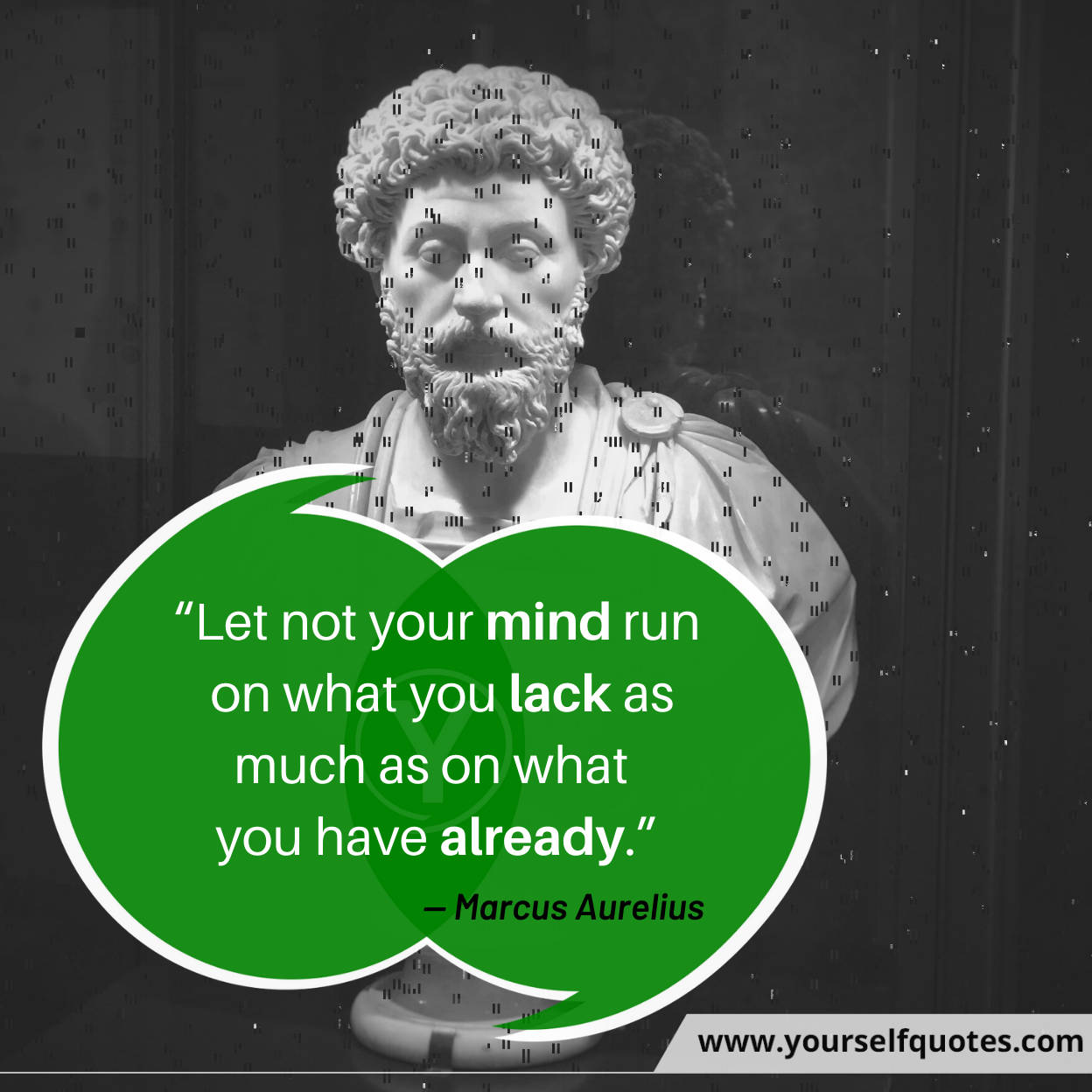 “Accept the things to which fate binds you, and love the people with whom fate brings you together, but do so with all your heart.” — Marcus Aurelius

“The only wealth which you will keep forever is the wealth you have given away.” — Marcus Aurelius 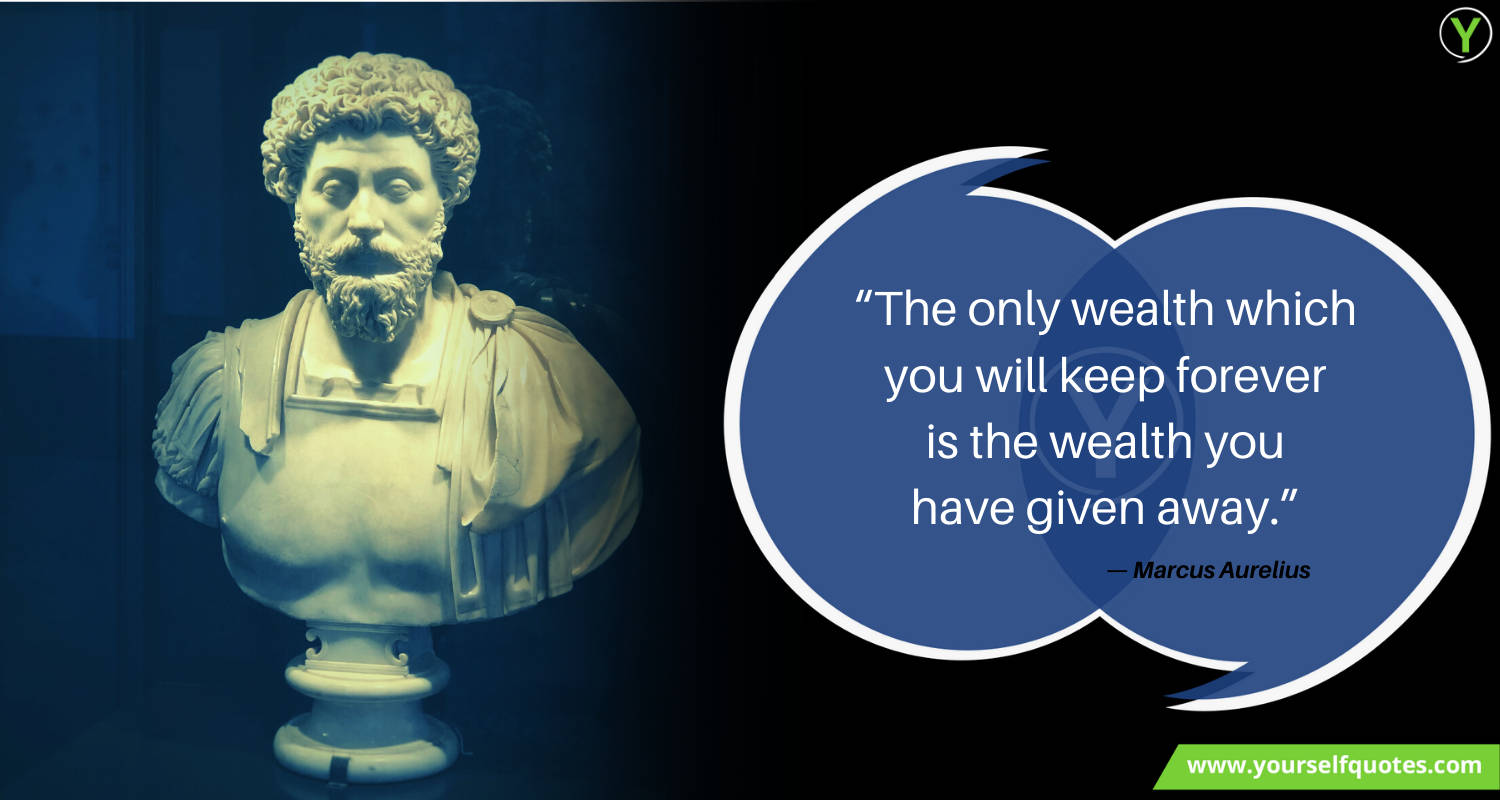 “The happiness of your life depends upon the quality of your thoughts; therefore guard accordingly.” — Marcus Aurelius

“Think of yourself as dead. you have lived your life. Now, take what’s left, and live it properly.” — Marcus Aurelius 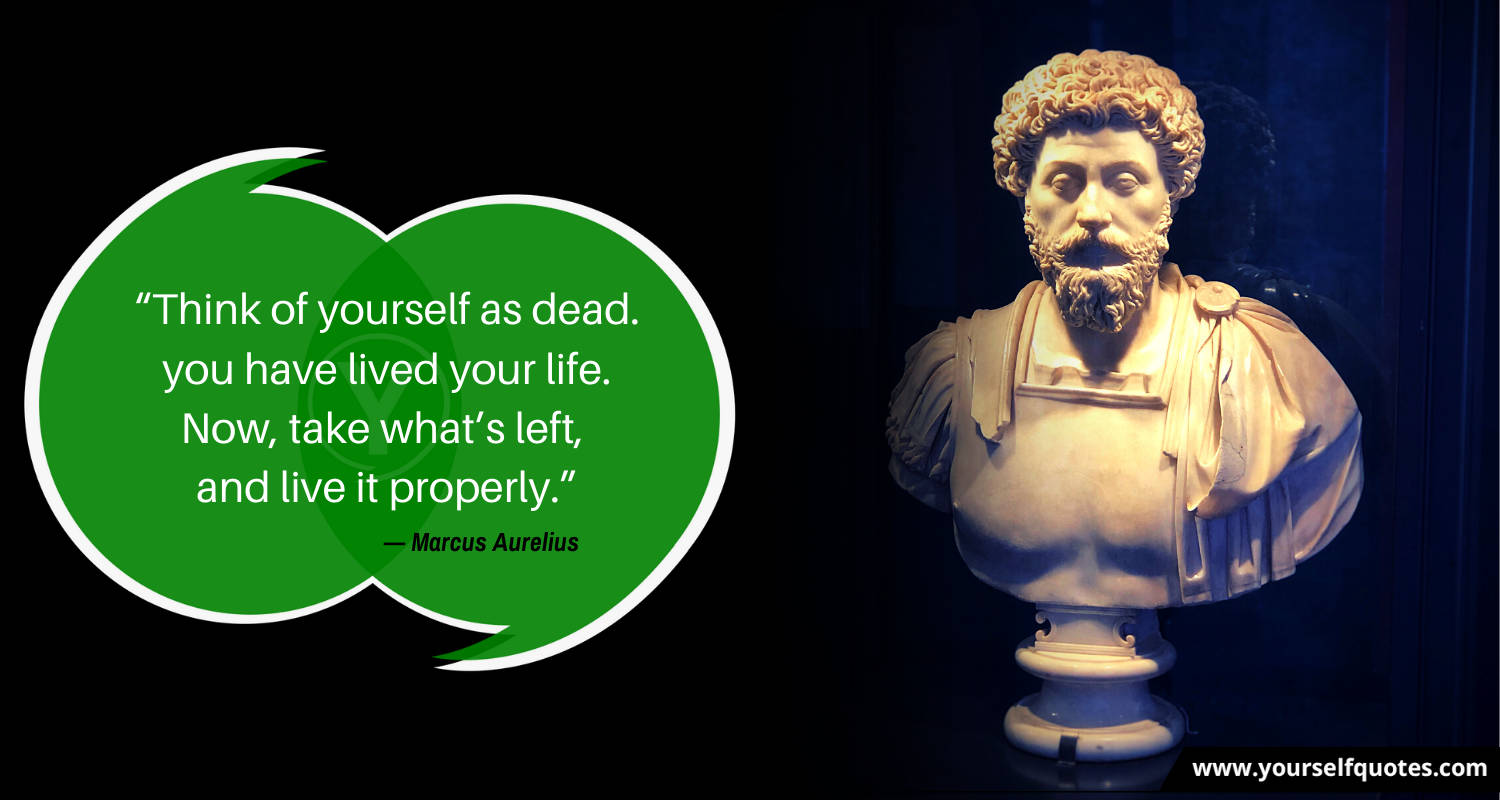 “It was for the best, so Nature had no choice but to do it.” — Marcus Aurelius

“It never ceases to amaze me: we all love ourselves more than other people but care more about their opinions than our own.” — Marcus Aurelius 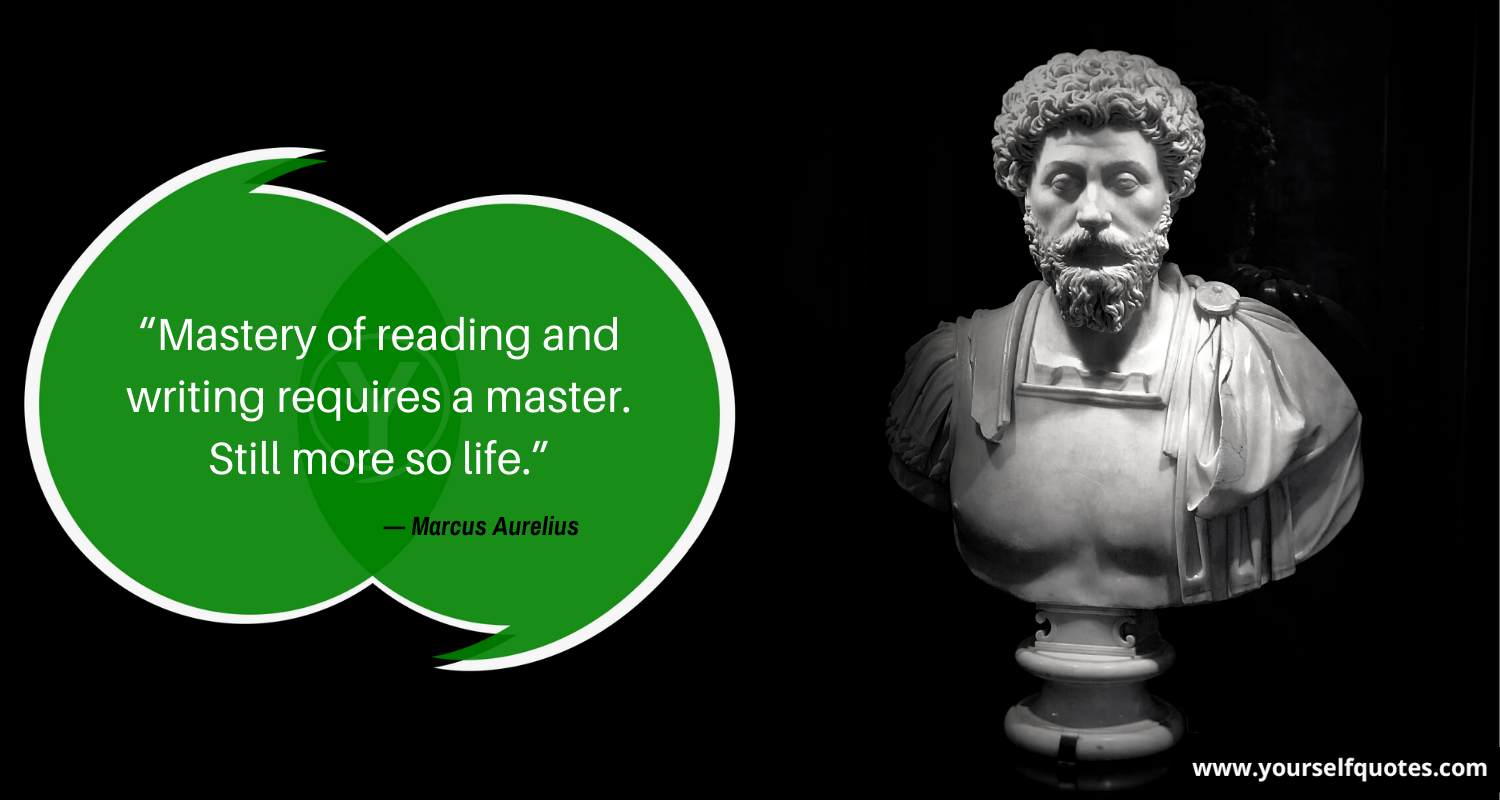 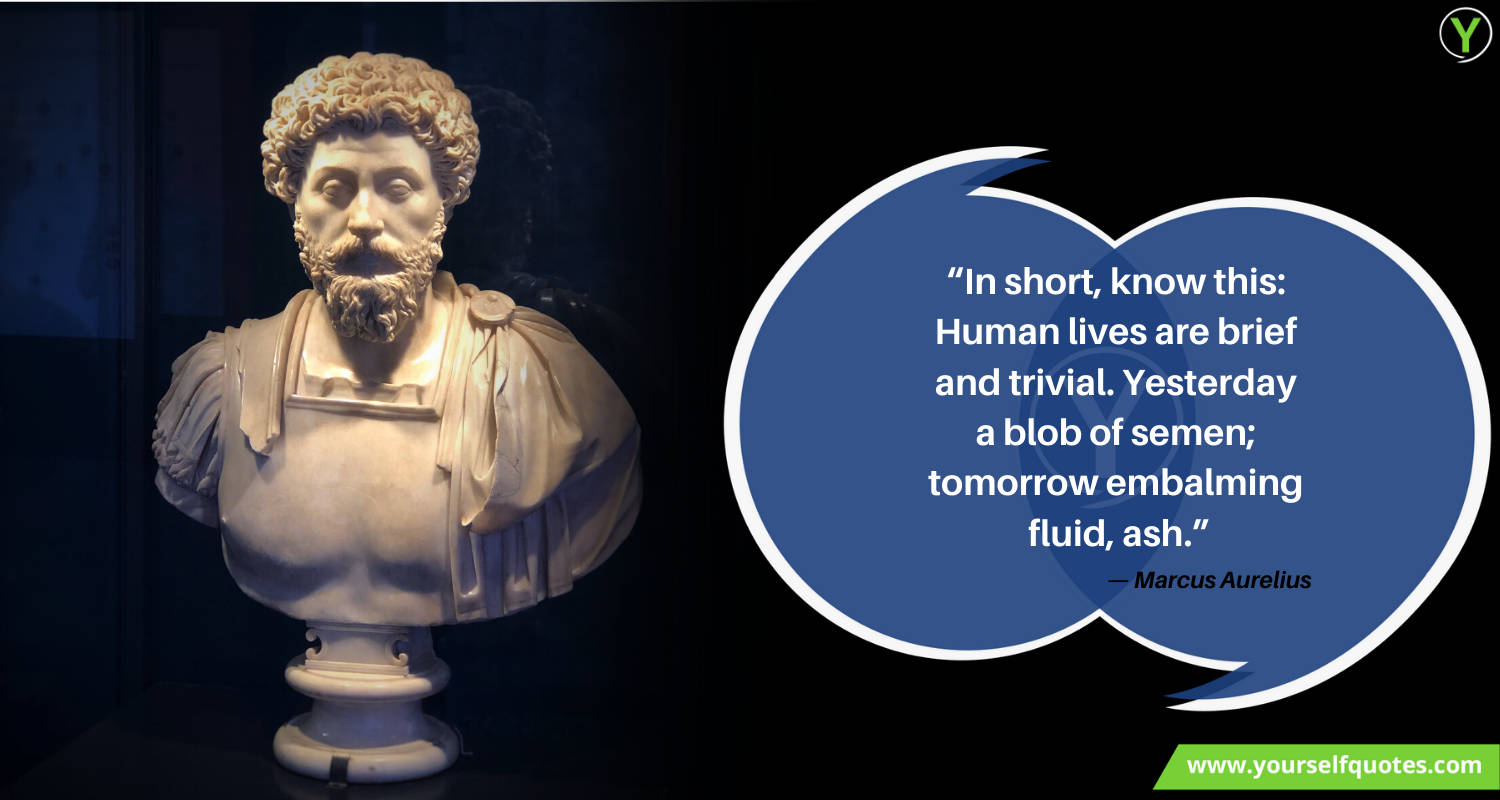 “It can ruin your life only if it ruins your character. Otherwise it cannot harm you inside or out.” — Marcus Aurelius 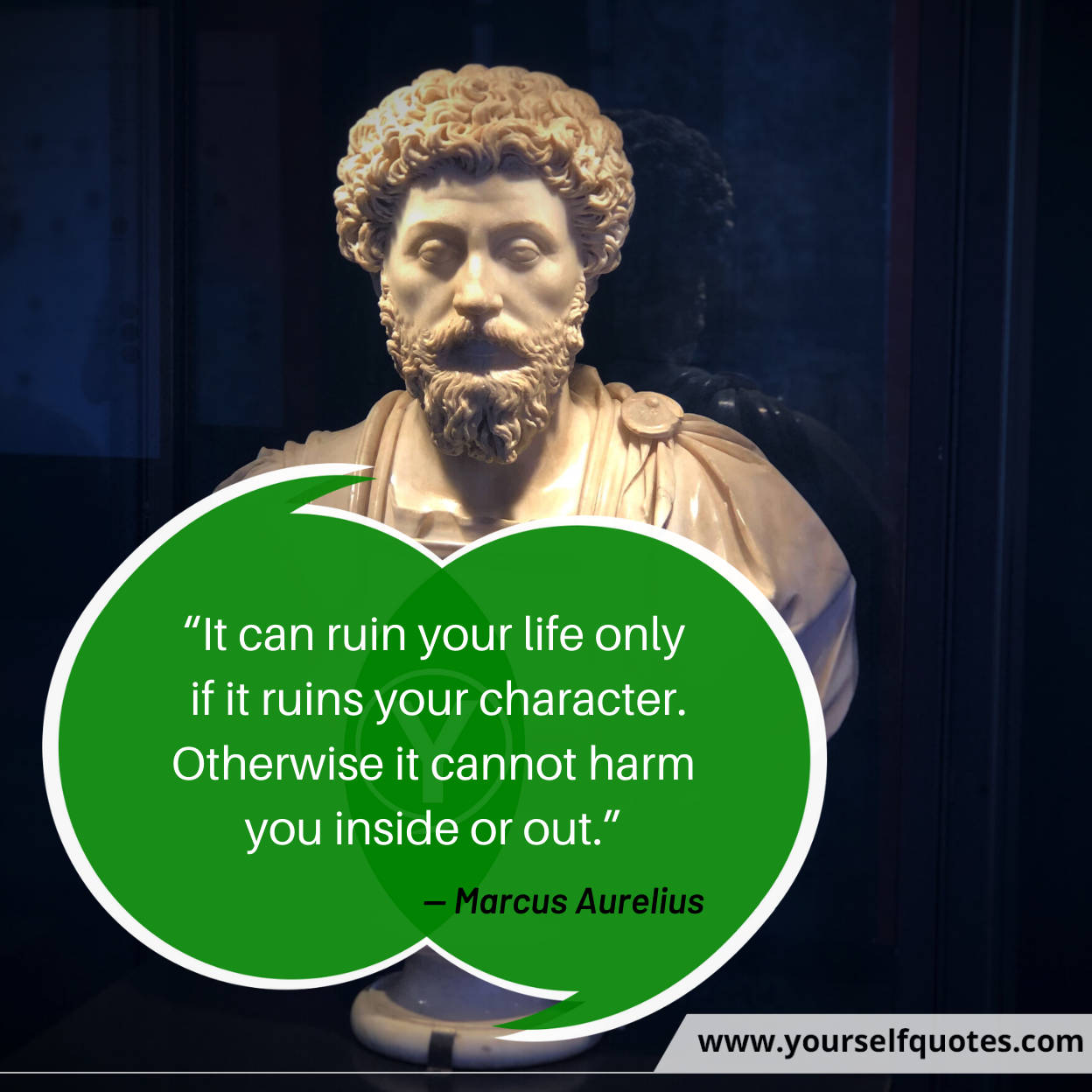 “Perfection of character: to live your last day, every day, without frenzy, or sloth, or pretense.” — Marcus Aurelius 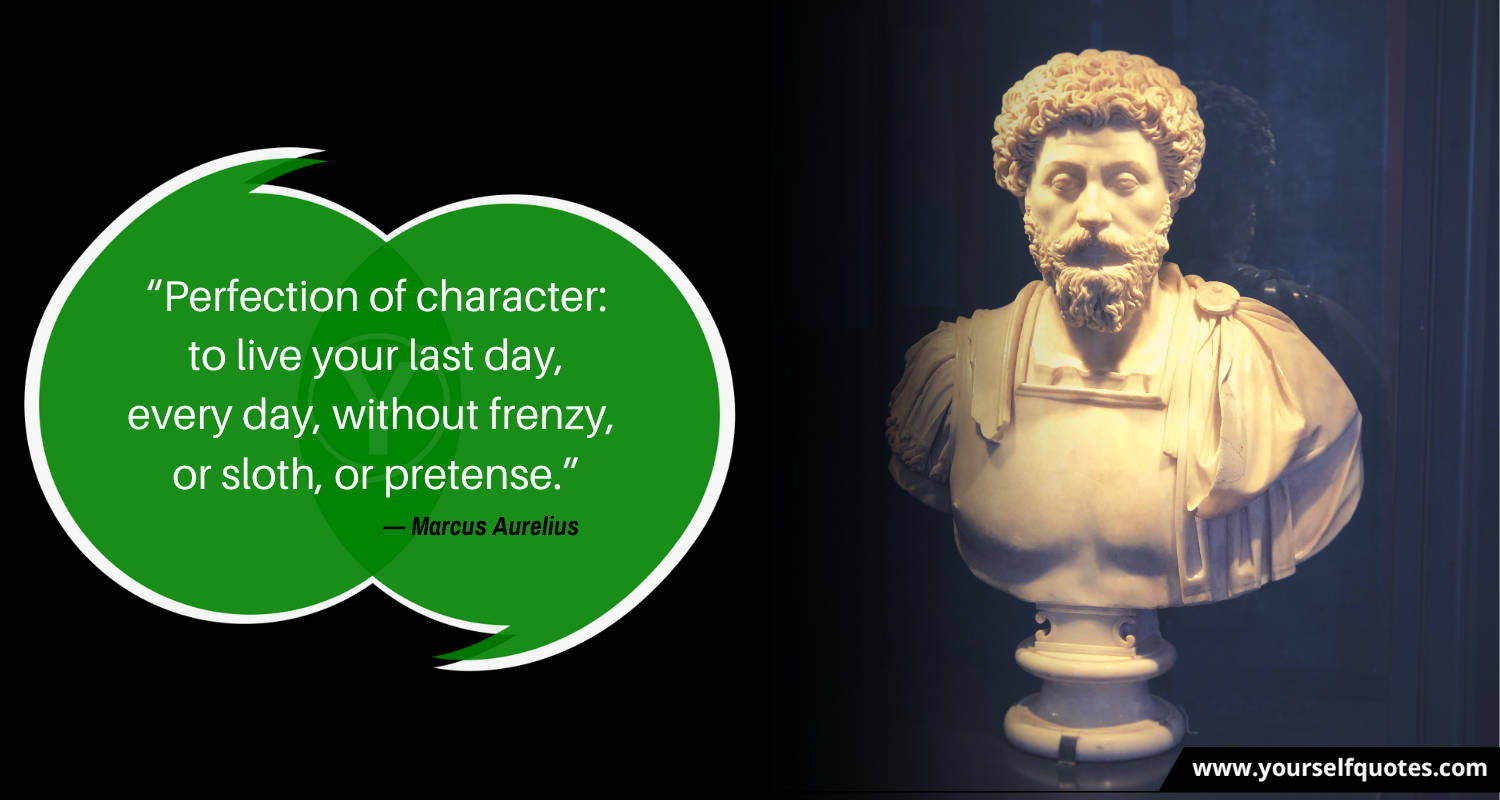 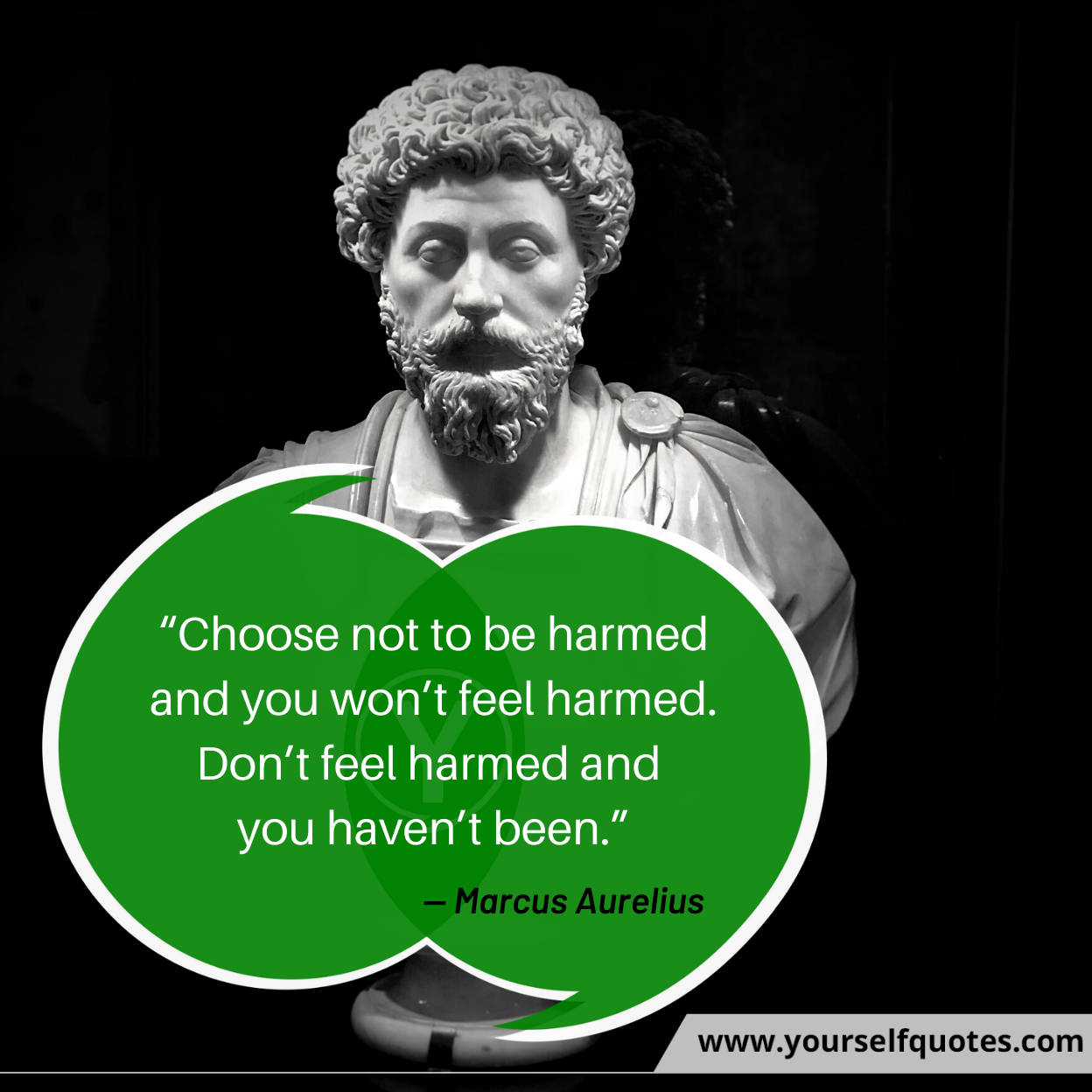 Marcus was perhaps a statesman, but one of no great caliber; nor was he really a sage. Generally speaking, he is a traditionally overrated figure, ruling in a bewildered manner over an empire beneath the gold under which many still lie a dwindling patch.

But his personal nobility and dedication survive the remorseless scrutiny; he obsessively counted the costs, but he did not shrink from paying them. Marcus died from natural causes in the city of Vindobona (modern Vienna) at the age of 58 on 17 March 180 AD. He was immediately deified and his ashes returned to Rome, where they rested in the mausoleum of Hadrian (modern Castel Sant’Angelo) until the town’s Visigoth sack in 410 AD.

Hope you enjoyed knowing about this great personality from history. So let’s spread out the word about him with others as well, share out these Marcus Aurelius Quotes Images with your family & friends only from Yourself Quotes.