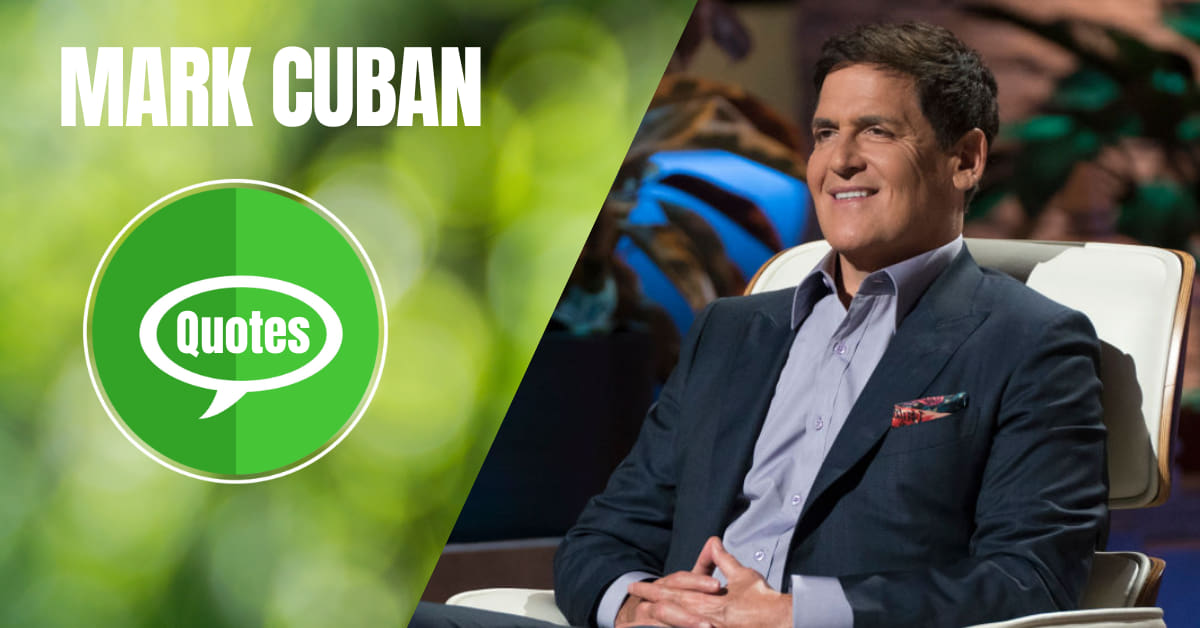 Mark Cuban is best known for his role as a “shark” investor on the hit television show Shark Tank. He is also the owner of the Dallas Mavericks professional basketball team, Landmark Theatres, and Magnolia Pictures, and is a hugely successful entrepreneur and investor.

You may believe you know Mark Cuban, but do you?

He competed on the popular television show Dancing with the Stars in 2007. Despite the fact that he didn’t win, he performed admirably, especially considering he began practicing with his dance partner only seven weeks after hip replacement surgery.

Cuban attended Mount Lebanon High School in Pennsylvania, where he earned money by working part-time jobs even at such a young age. Mark Cuban’s first deed to earn money for a pair of shoes he liked occurred when he was 12 years old.

To buy it, he began selling trash bags door to door. This exemplified Cubans’ determination to change their lives. Cuban graduated with a Bachelor of Science in Business Administration from Indiana University of Bloomington in 1981.

Mark began selling trash bags when he was 12 years old in order to fund the purchase of the expensive basketball shoes he desired.

In 1999, Cuban entered the Guinness Book of Records by completing the world’s largest single e-commerce transaction. What did he buy, exactly? For $40 million, you can buy a Gulfstream V private jet.

Mark was able to purchase that private jet because he sold his company, Broadcast.com, to Yahoo in 1999 for $5.7 billion, netting him about $2 billion in the process.

The NBA has fined Mark over $2 million for various infractions. For a remark he made about an NBA referee, he received the highest fine of $500,000. “I wouldn’t hire Ed Rush to manage a Dairy Queen,” Cuban said of the referee.

After receiving the $500,000 fine for his Dairy Queen remark about Ed Rush, Cuban accepted an invitation to work behind the counter at a local Dairy Queen for a day.

Mark attributes his courage to taking risks and accepting responsibility for his successes and failures to Ayn Rand’s novel The Fountainhead.

Success, according to Mark, necessitates dedication and focus (he once went seven years straight without a vacation while building his own business). According to Cuban, “There are no shortcuts available. You must work hard in order to put yourself in a position where, if luck strikes, you will be able to recognise and seize the opportunity.”

He’s been in a lot of businesses and has seen a lot of highs and lows, profits and losses, but he’s never given up hope. With his bold mindset and strong determination, he has learned a lot from his failures and continues to strive for the best and move forward and upward. Mark Cuban is a true role model for all entrepreneurs and their startup ventures.

This is an inspiring collection of 41 Mark Cuban quotes about business and life success. This collection of quotations is fantastic for any entrepreneur who reads it.

“Success is about making your life a special version of unique that fits who you are not what other people want you to be.” ― Mark Cuban 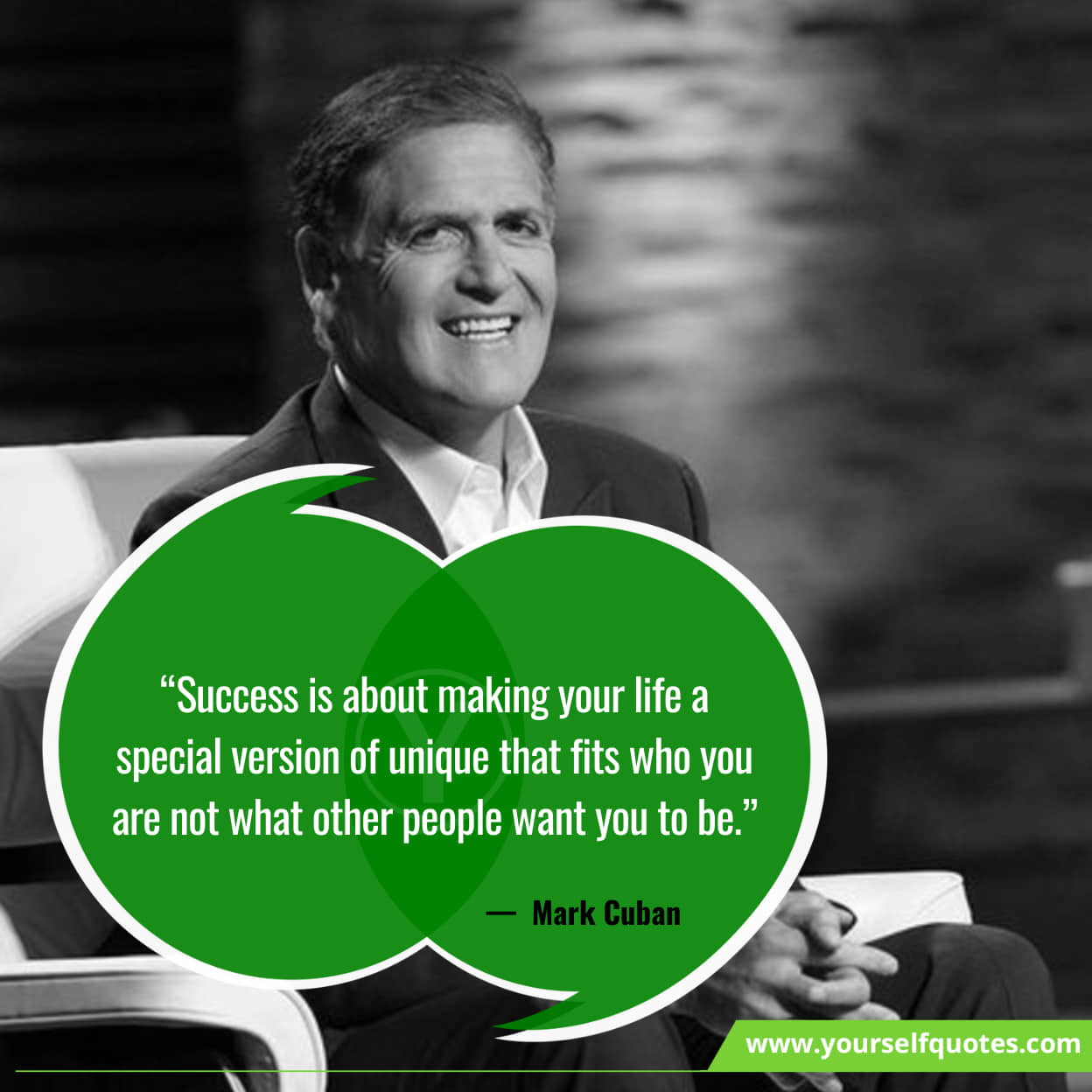 “It’s not about money or connections. It’s the willingness to outwork and outlier everyone.” ― Mark Cuban

“Always wake up with a smile knowing that today you are going to have fun accomplishing what others are too afraid to do.” ― Mark Cuban

“What makes a good salesperson? Let me be clear that it’s not the person who can talk someone into anything.” ― Mark Cuban

“It’s not the hustler who is a smooth talker.” ― Mark Cuban

“The best way to predict the future is to invent it.” ― Mark Cuban

“No one is going to know or care about your failures, and neither should you.” ― Mark Cuban

“All you have to do is learn from them and those around you because all that matters in business are that you get it right once.” ― Mark Cuban

“Effort is measured by setting goals and getting results.” ― Mark Cuban 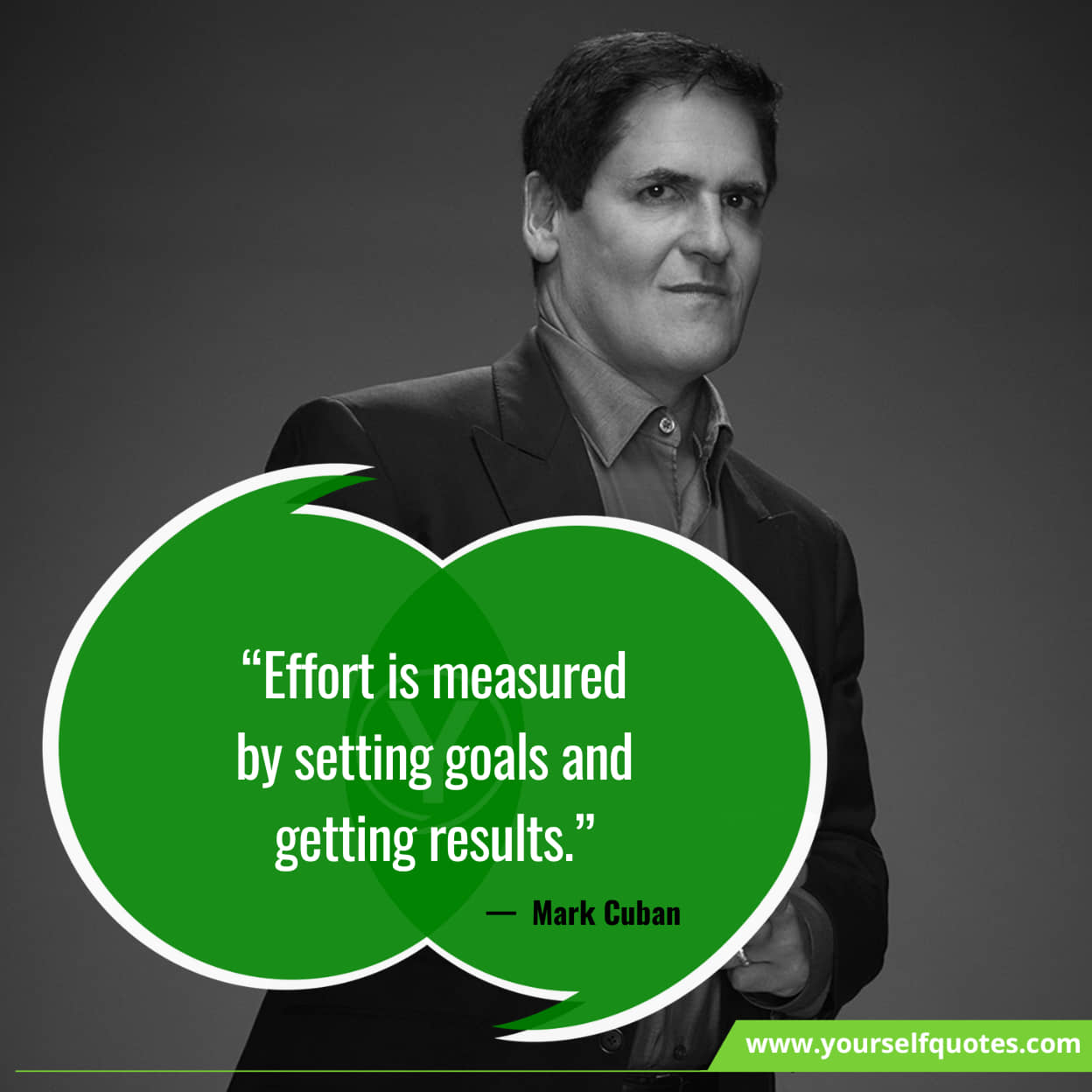 “Investors don’t care about your dreams and goals. They love that you have them.” ― Mark Cuban

“They love that you are motivated by them. Investors care about how they are going to get their money back and then some.” ― Mark Cuban

“Relaxing is for the other guy. I may be sitting in front of the TV, but I’m not watching it unless I think there is something I can learn from it.” ― Mark Cuban

“Effort is measured by setting goals and getting results.” ― Mark Cuban

“I had taken a few classes in real-world business and got paid for it instead of paying tuition.” ― Mark Cuban

“Never settle. There is no reason to rush.” ― Mark Cuban

“It would have been easy to judge effort by how many hours a day passed while I was at work. That’s the worst way to measure effort.” ― Mark Cuban

“In business, to be a success, you only have to be right once.” ― Mark Cuban 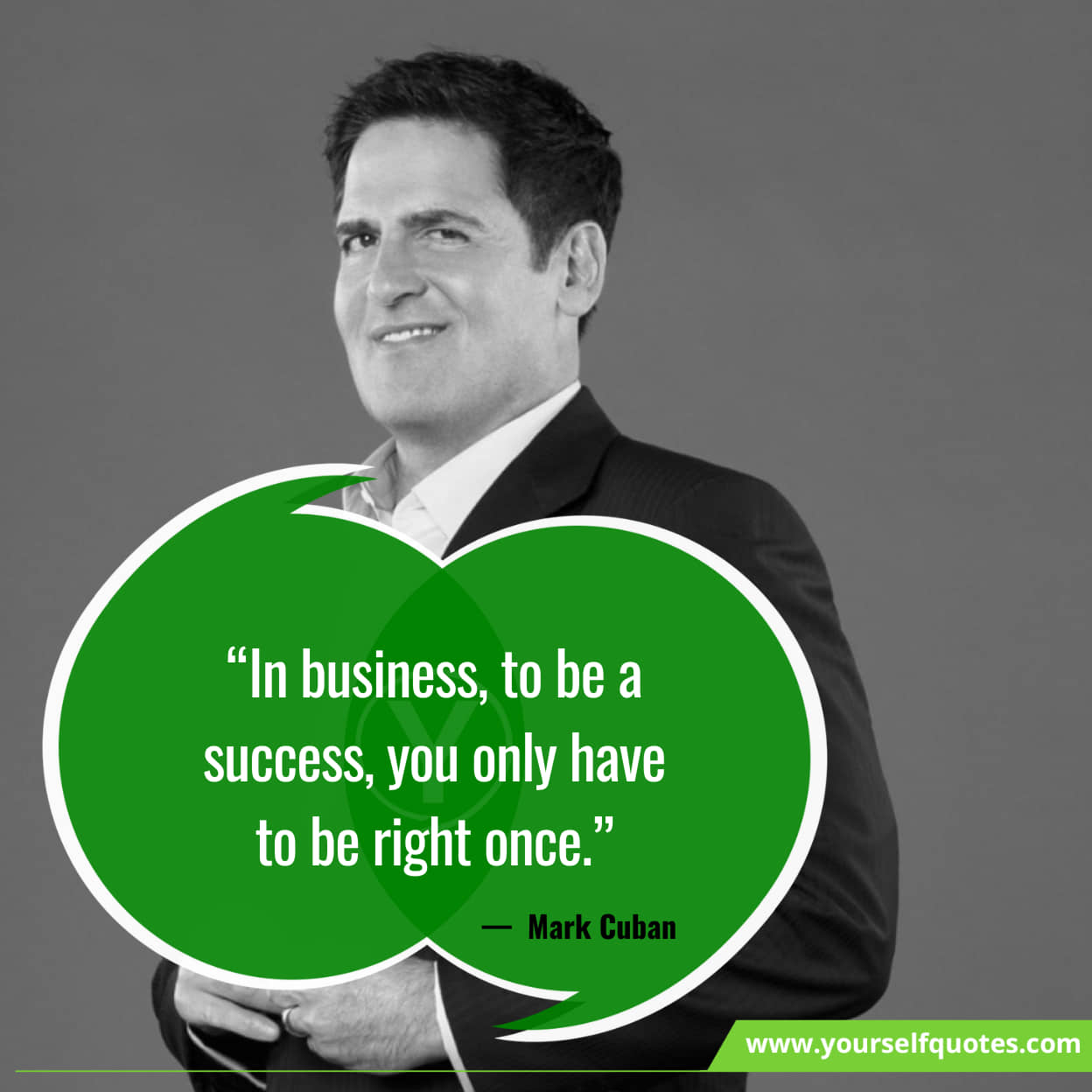 “Work like there is someone working 24 hours a day to take it all away from you.” ― Mark Cuban

“Everyone has got the will to win; it’s only those with the will to prepare that do win.” ― Mark Cuban

“Work like there is someone working 24 hours a day to take it all away from you.” ― Mark Cuban

“In sports, the only thing a player can truly control is effort. The same applies to business.” ― Mark Cuban

The only thing any entrepreneur, salesperson or anyone in any position can control is their effort.” ― Mark Cuban

“Know your core competencies and focus on being great at them.” ― Mark Cuban

“The only difference between who you are, and who you want to be, is what you do.” ― Mark Cuban

“Sweat equity is the most valuable equity there is.” ― Mark Cuban 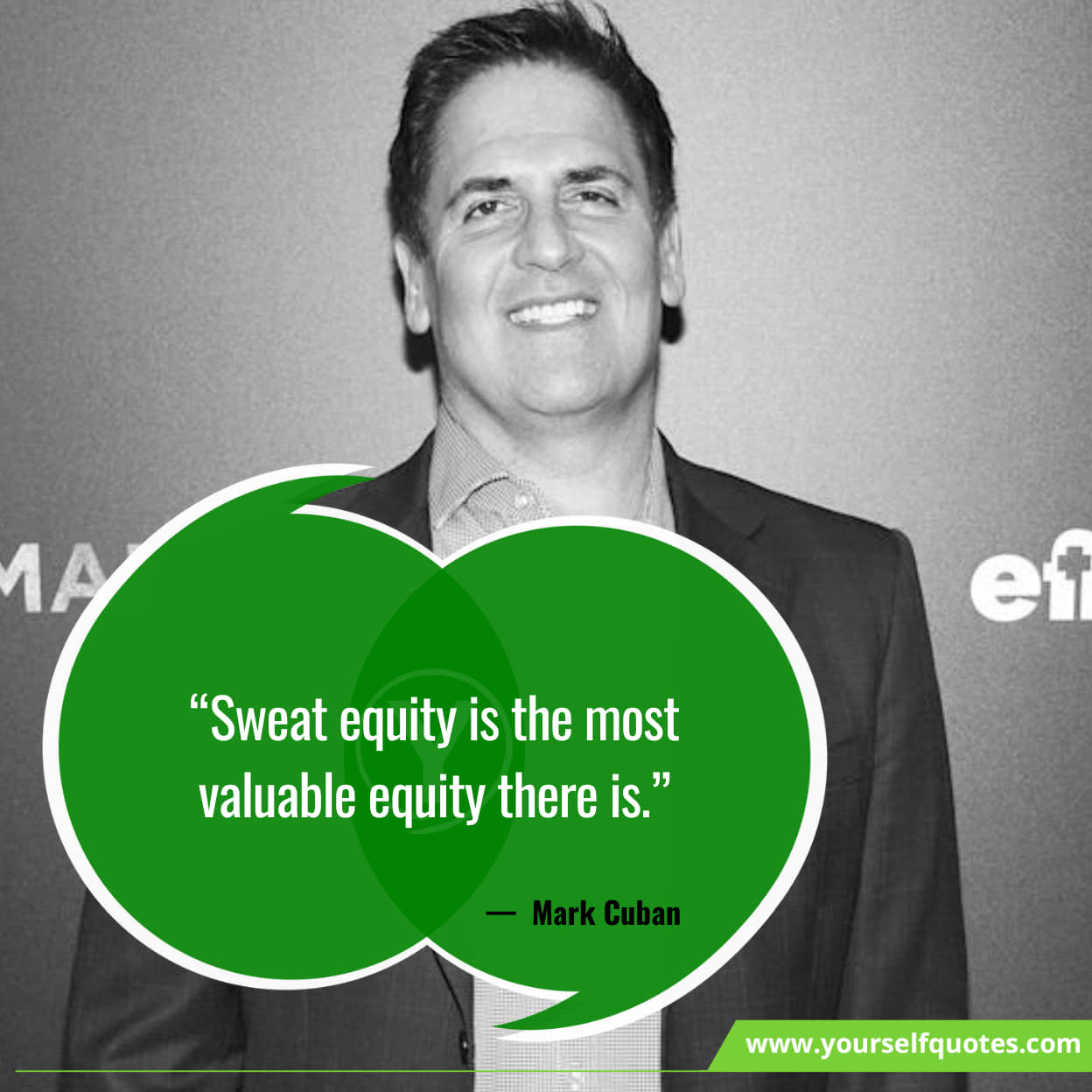 “What I’ve learned is that if you really want to be successful at something, you’ll find that you put the time in.” ― Mark Cuban

“Don’t start a company unless it’s an obsession and something you love. If you have an exit strategy, it’s not an obsession.” ― Mark Cuban

“I read every book and magazine I could. Heck, three bucks for a magazine, twenty bucks for a book.” ― Mark Cuban

“The biggest bubble that I participate in is Conservative Facebook.” ― Mark Cuban

“What I’ve learned is that if you really want to be successful at something, you’ll find that you put the time in.” ― Mark Cuban

“It doesn’t matter how many times you have failed, you only have to be right once.” ― Mark Cuban

“Open offices keep everyone in tune with what is going on and keep the energy up.” ― Mark Cuban

“I love to compete. To me, business is the ultimate sport. It’s always on. There is always someone trying to beat me.” ― Mark Cuban

“I worked hard and smarter than most people in the businesses I have been in.” ― Mark Cuban

“You need to turn over every rock and open every door to learning your industry. This process never ends.” ― Mark Cuban 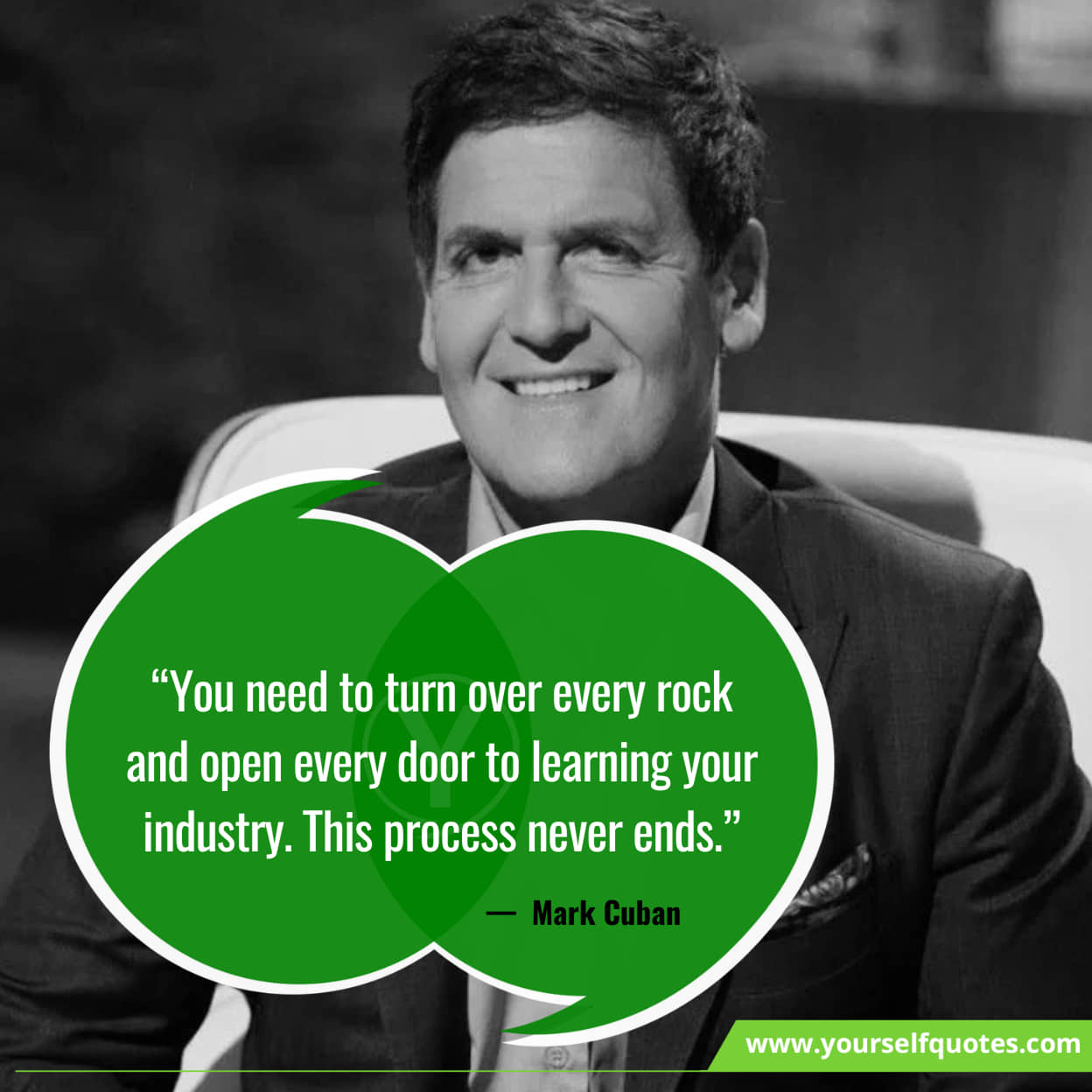 “I still work hard to know my business. I’m continuously looking for ways to improve all my companies, and I’m always selling. Always.” ― Mark Cuban

“I create offbeat advice; I don’t follow it. I rarely take third-party advice on my investments.” ― Mark Cuban

“Treat your customers like they own you. Because they do.” ― Mark Cuban

“I’m a believer that you accomplish much, much more with direct relationships than by using an intermediary.” ― Mark Cuban

“I know that I’m not perfect. While we all have our prejudices and bigotries.” ― Mark Cuban

“We have to learn that it’s an issue that we have to control, that it’s part of my responsibility as an entrepreneur to try to solve it.” ― Mark Cuban

“I bought a lifetime pass on American Airlines and had a blast.” ― Mark Cuban

“Automation is going to cause unemployment, and we need to prepare for it.” ― Mark Cuban

“Whatever you can say in a meeting, you can put in an email. If I have questions, I’ll tell you via email.” ― Mark Cuban

“I’m not against government involvement in times of need.” ― Mark Cuban

“If you can’t admit a failure, you’re not an entrepreneur. You are not a good business person.” ― Mark Cuban 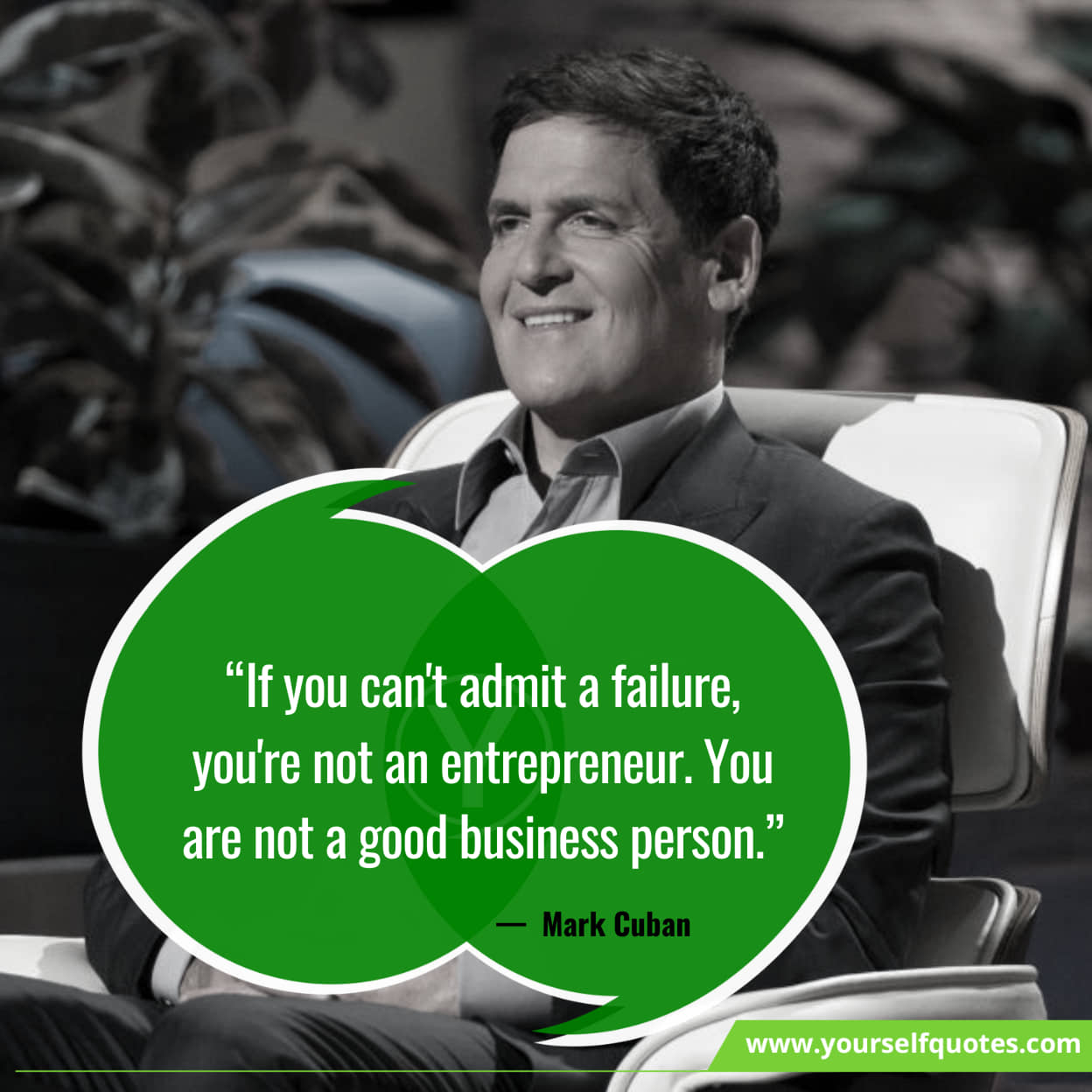 “Mark Cuban” is one of the most well-known names when it comes to powerful businessmen. Mark Cuban is known for his infamous personality as well as his clear and unmistakable ideas and businesses. In the year 1958, he was born in Pittsburgh.

His family was made up of Russian immigrants, and his grandfather and father worked extremely hard to provide for the entire family.

His first business venture, a computer consulting firm called “MicroSolutions,” changed his life in 1990. This business made him a billionaire and allowed him to branch out into other areas of business. ‘MicroSolutions’ is now a household name all over the world.

Thank you for taking the time to read through this fantastic collection of Mark Cuban Quotes!

Don’t forget to take a look at the rest of our amazing quote articles.

Which are your favorite Mark Cuban Quotes? Leave a comment below.

Top 7 Activities You Should Try While Visiting Melbourne