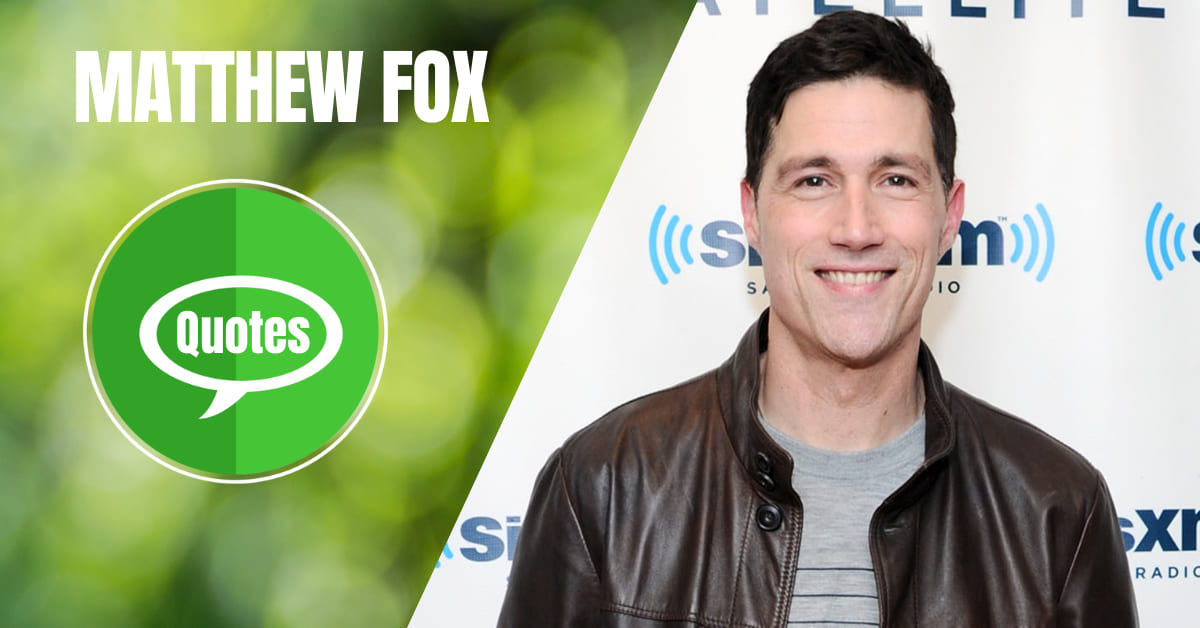 Matthew Fox an amazing American actor, do you know about him?

Most of you may have seen his exuberant performance in the famed TV series ‘LOST,’ which garnered him many nominations for the prestigious ‘Golden Globe Award’ and ‘Primetime Emmy Award.’

Fox was born on July 14, 1966, in Abington, Pennsylvania, to Loretta B. and Francis G. Fox. His father was from a “very blue-blood” Pennsylvania family of largely English lineage, while his mother was half Italian and half British.

Matthew was a post-graduate student at Deerfield Academy for one year and graduated with the class of 1984. In 1989, he received a B.A. in economics from Columbia University.

Fox made his television debut in an episode of Wings when he was 25 years old. In the same year, he starred in Freshman Dorm, a short-lived drama series.

Fox married his longtime lover, Margherita Ronchi, an Italian native, in 1992. While Fox was a student at Columbia, the couple met. Kyle Allison and Byron were born to the couple later in life.

Fox also works as a photographer. A bonus CD included with The Complete First Series of Lost includes “The Art of Matthew Fox,” which features photographs he took of the cast and crew while on production.

He once said “To be up there by yourself, and it’s all up to you whether it’s gonna be an amazing flight or it’s not gonna go as beautiful. I feel like I’m hyper-prepared when I fly. There is so much you don’t have control over.“

Fox was accused of attacking a female bus driver in Cleveland, Ohio, on August 28, 2011. Prosecutors decided against charging Fox. The bus driver dropped a legal claim in May 2012 after her counsel resigned and revealed that she “deliberately failed and refused to offer complete and timely cooperation and information.”

Fox came on The Ellen DeGeneres Show in October 2012 and dismissed the charges as false, noting that he couldn’t refute them at the moment due to the current trial. He said he was assaulted in the face and retaliated, and that the bus driver sought to extort money from him using her version of events; he claimed prosecutors in the criminal case found her claims were a “hoax.”

His Lost co-star Dominic Monaghan tweeted about Fox in May 2012, “He abuses women. These are not isolated cases. Often.” “The Monaghan thing — was a lot of garbage,”

Fox said, “and I’m not going to waste too much time on that.” In 2012, he also told Men’s Journal, “I’ve never struck a lady before. Never have and will never have. But I believe that no matter what, there will be many individuals who believe it is true.”

His character appeared to be full of experiences and he always accepted each challenge with a brave heart.

Here is a collection of great Matthew Fox Quotes: 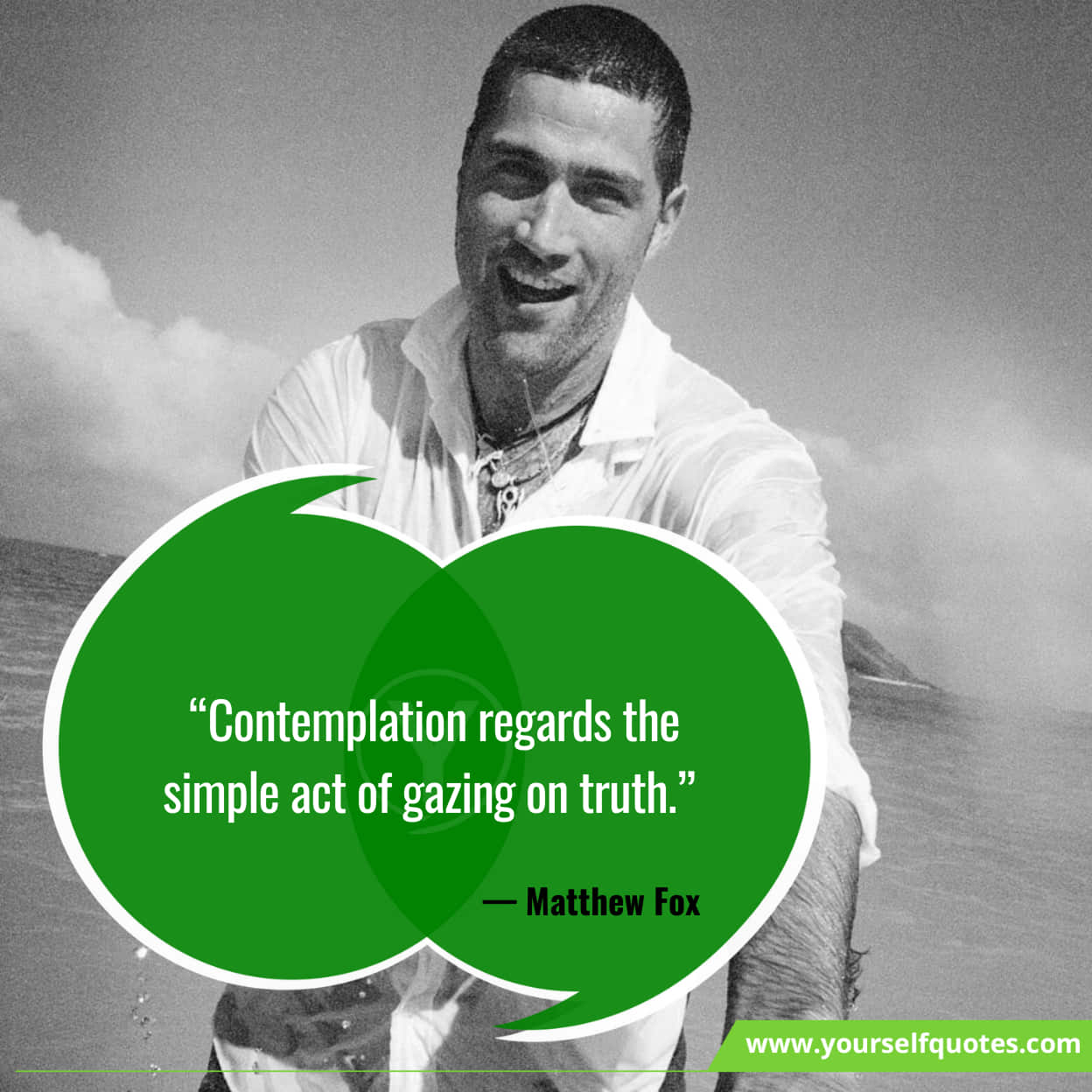 “The letting go of patriarchy which creates one-sided citizens of women and men alike and culminates in violent living and violent relationships.” — Matthew Fox

“As Rabbi Heschel teaches, humanity will be saved not by more information, but by more appreciation.” — Matthew Fox

“Only art as meditation reminds people so that they will never forget that the most beautiful thing a potter produces is…the potter.” — Matthew Fox

“Rumi speaks often of the power of silence to take us to what we are looking for.” — Matthew Fox

“life is short,”42 and we should drink deeply of its goodness while we can.” — Matthew Fox

“All are called to be prophets, which is to interfere with injustice.” — Matthew Fox

“Fourteen billion years of evolution and unfolding of the universe bespeak the intimate sacredness of all that is.” — Matthew Fox 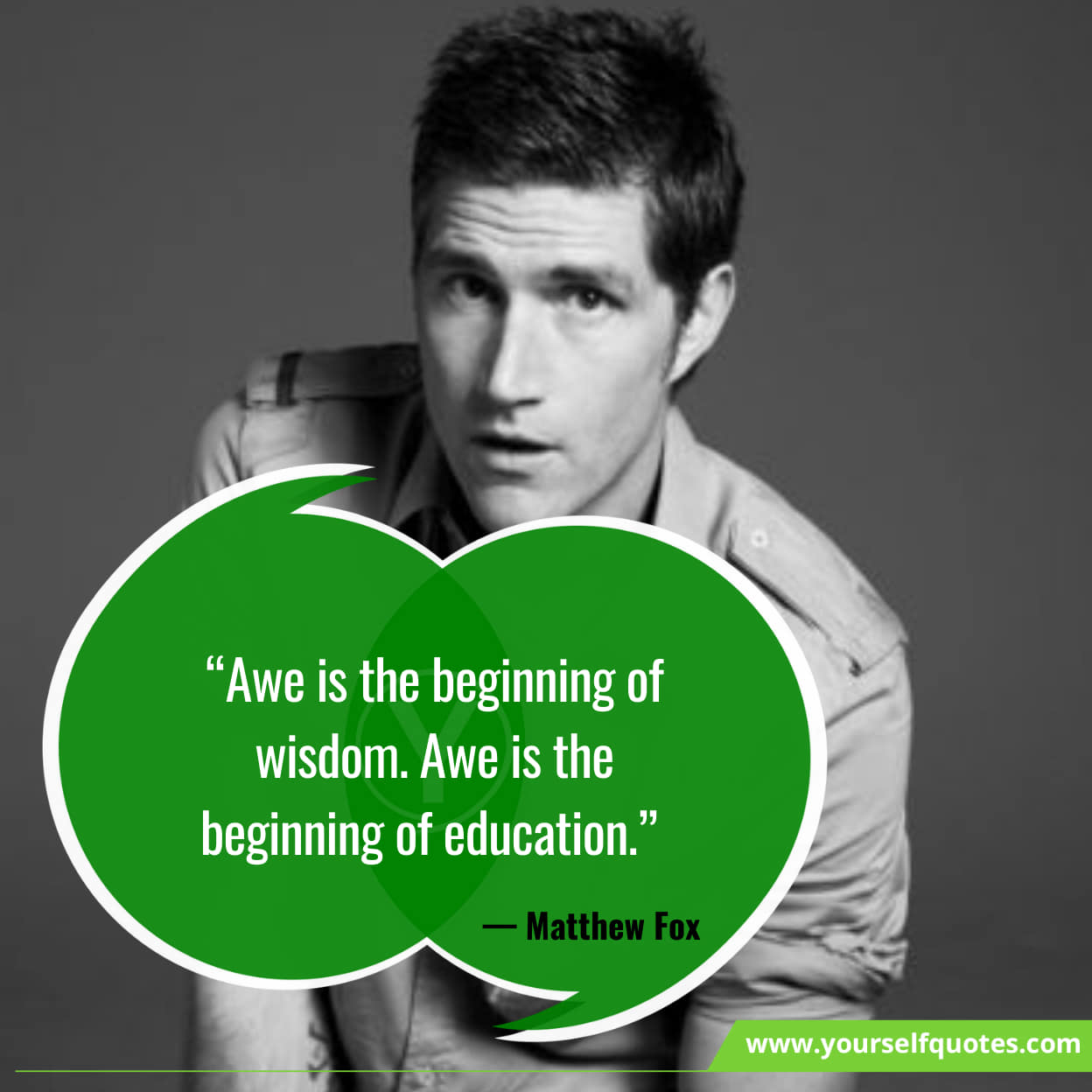 “We must work on our souls, enlarging and expanding them.” — Matthew Fox

“A global awakening can only happen from a spiritual awakening that is of global dimensions.” — Matthew Fox

“Facing the darkness, admitting the pain, allowing the pain to be pain, is never easy. ” — Matthew Fox

“If we fail to let pain be pain – and our entire patriarchal culture refuses to let this happen – then pain will haunt us in nightmarish ways.” — Matthew Fox

“We will become pain’s victims instead of the healers we might become.” — Matthew Fox

“Creation is all space, all time – all things past, present, and future.” — Matthew Fox

“Prayer is essentially about making the heart strong so that fear cannot penetrate there.” — Matthew Fox

“What is of the most moment of compassion is not feelings of pity but feelings of togetherness.” — Matthew Fox

“Creativity comes from the Universe itself.” — Matthew Fox 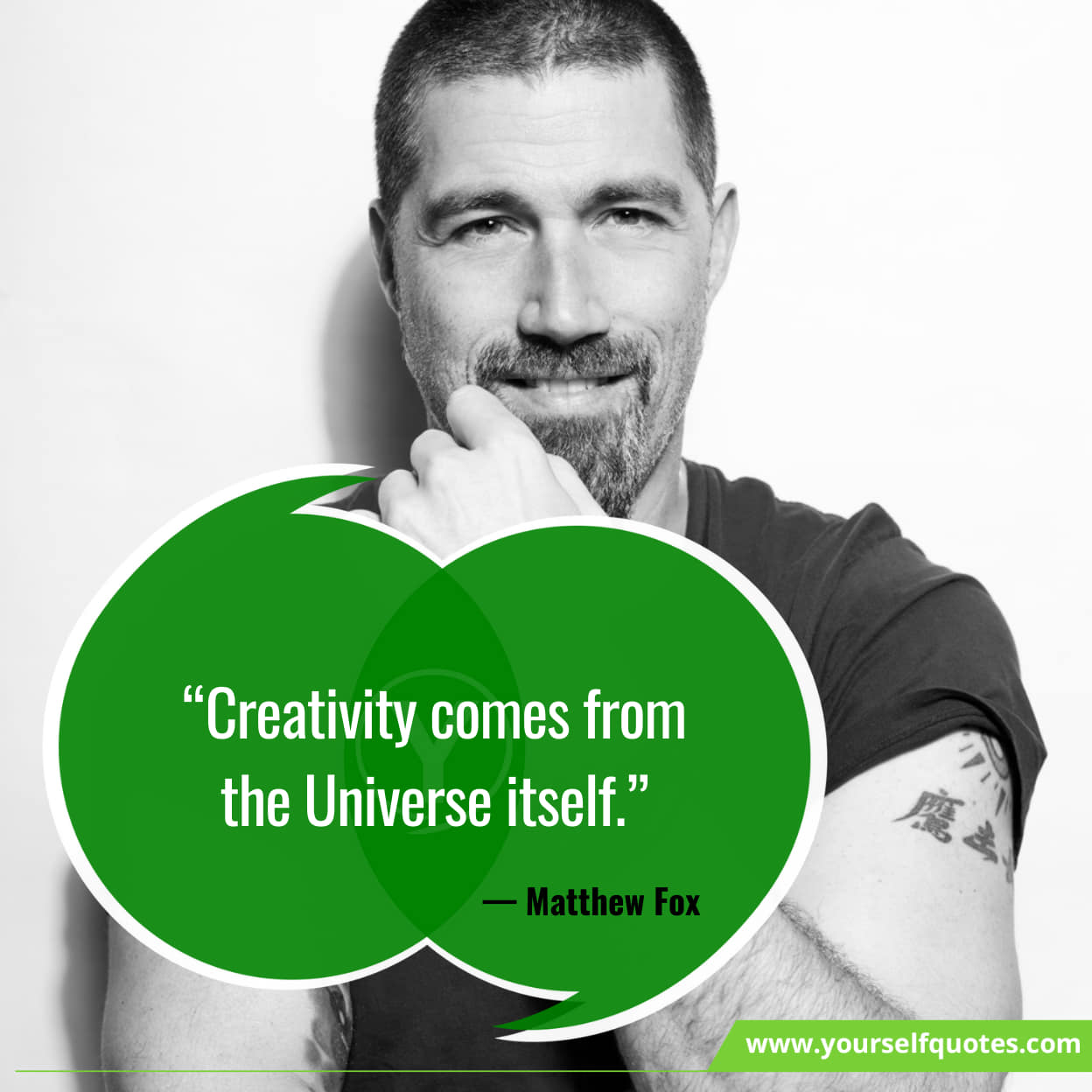 “Humor and paradox are often the only ways to respond to life’s sorrow with grace.” — Matthew Fox

“Where the Divine and the Human Meet.” — Matthew Fox

“What happens to another, whether it be a joy or a sorrow, happens to me.” — Matthew Fox

“The doctrine of the Incarnation is itself an invitation to all believers to love the earth, cherish it, find the divine in it.” — Matthew Fox

“Men should not be sexing their women in the missionary position because they are facing away from the sky.” — Matthew Fox

“Instead of looking down, men are to look up. To the vastness of Father Sky.” — Matthew Fox

“Human beings are midway between the size of a living cell and the size of Earth.” — Matthew Fox

“Who we thought we were dies when a beloved dies. And it takes a while for a new self to rise, often haltingly, from the ashes of our ravaged hearts.” — Matthew Fox

“One way to combat it was to force sailors to stay on ships for forty days after anchoring.” — Matthew Fox

Matthew Fox Quotes On Knowing Oneself 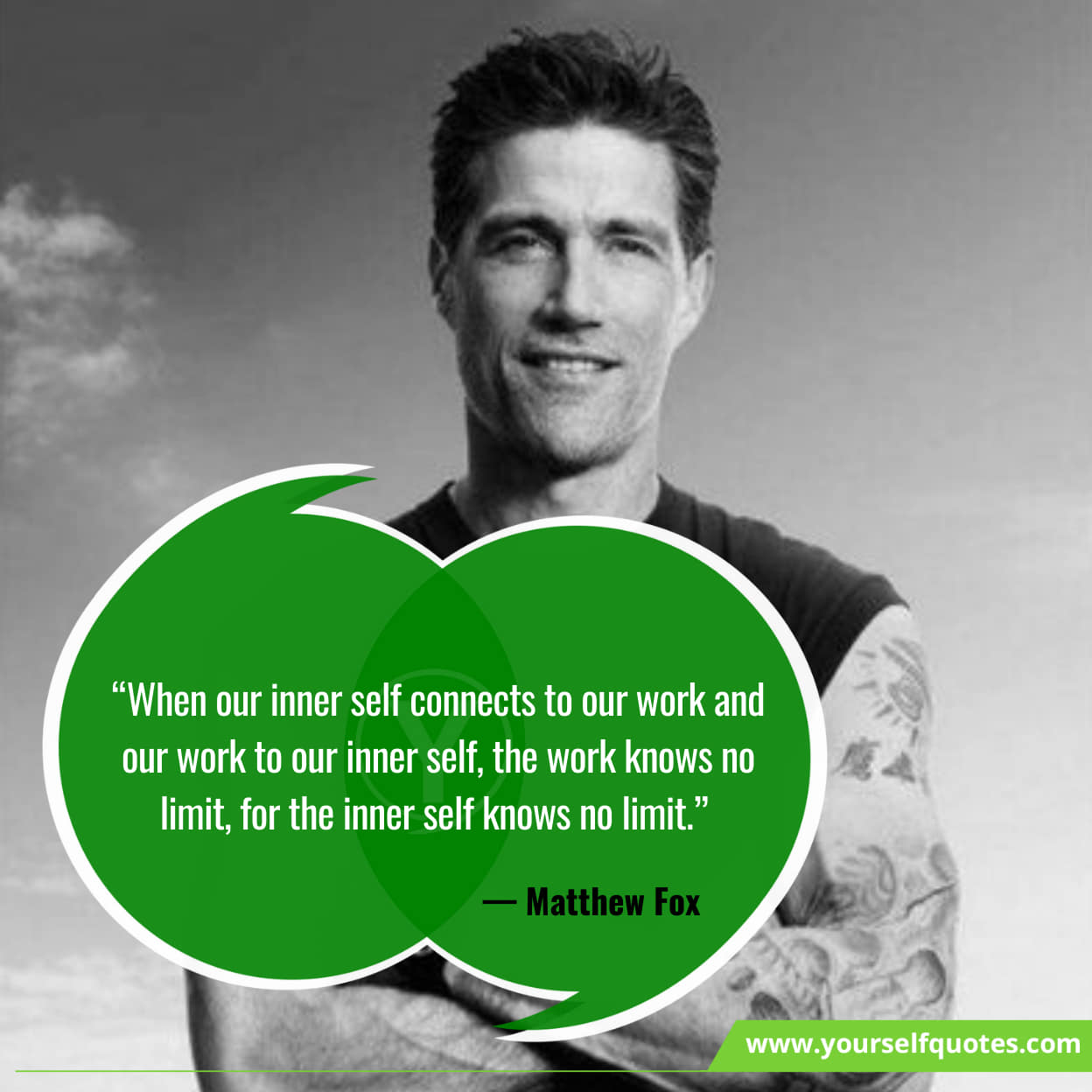 “Work should be in order to live. We don’t live in order to work. That shift in awareness is necessary.” — Matthew Fox

“A global awakening can only happen from a spiritual awakening that is of global dimensions.” — Matthew Fox

“Do not confuse beauty with beautiful. Beautiful is a human judgment. Beauty is All. The difference is everything.” — Matthew Fox

“To create is always to learn, to begin over, to begin at zero.” — Matthew Fox

“Humor and paradox are often the only ways to respond to life’s sorrow with grace.” — Matthew Fox

“If you look closely at a tree you’ll notice its knots and dead branches, just like our bodies. What we learn is that beauty and imperfection go together wonderfully.” — Matthew Fox

“To connect with the great river, we all need a path, but there’s only one river when you get down there.” — Matthew Fox

“The universe is in the habit of making beauty.”

“There is no end to the beauty for the person who is aware. Even the cracks between the sidewalk contain geometric patterns of amazing beauty.” — Matthew Fox 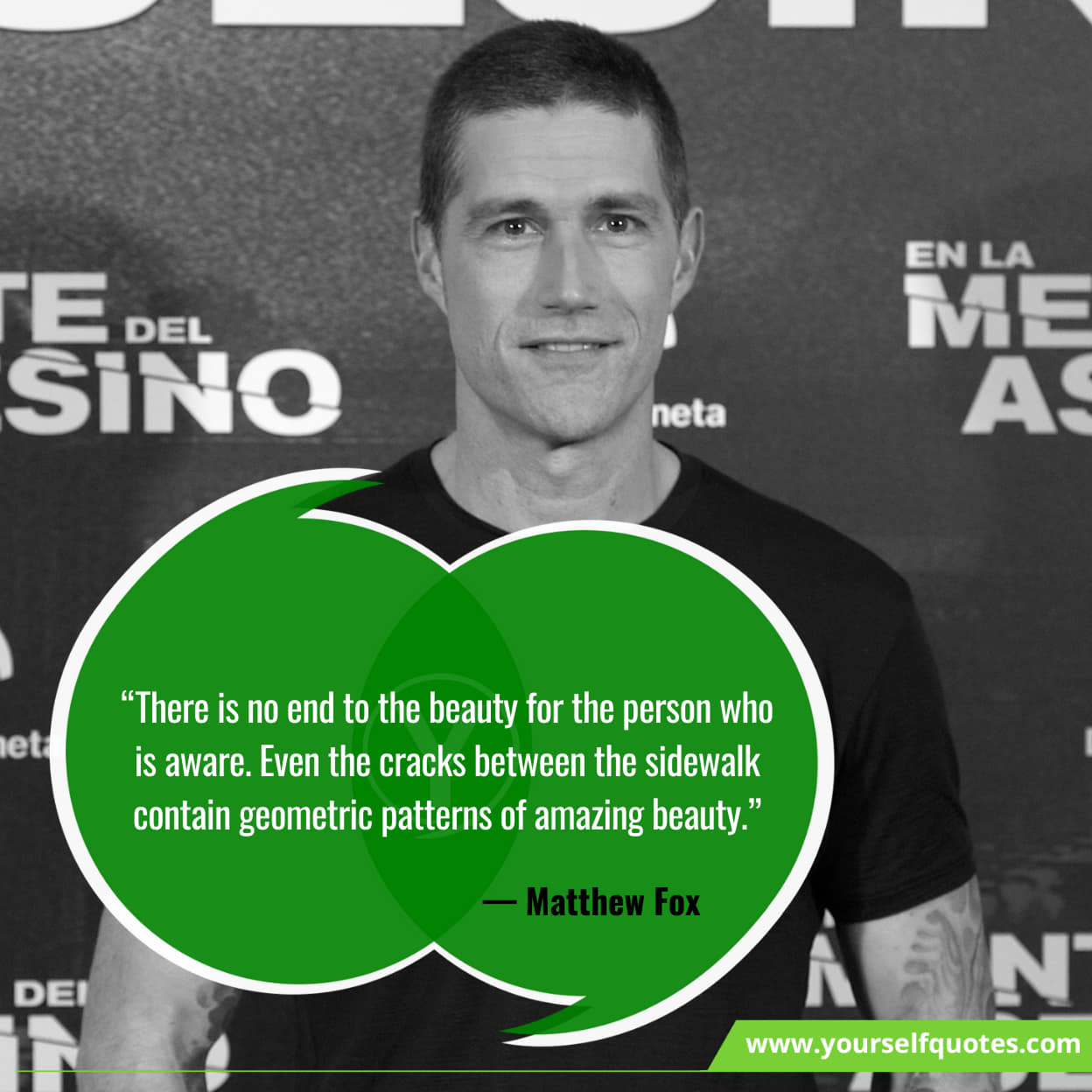 “Sustainability is another word for justice, for what is just is sustainable and what is unjust is not.” — Matthew Fox

“There are flowers and songs, snowflakes and smiles, acts of great courage, laughter between friends, a job well done, the smell of fresh-baked bread. Beauty is everywhere.” — Matthew Fox

“Soul is our appetite, driving us to eat from the banquet of life. People filled with the hunger of soul take food from every dish before them, whether it be sweet or bitter.” — Matthew Fox

“A lot of people want to see this idealized version of heroism, all pretty and perfect, and I’m not interested in playing the goody-goody hero at all.” — Matthew Fox

“I’m really enjoying the process of learning to fly. How it will fit into my life down the road – I’m looking forward to discovering that.” — Matthew Fox

“Big-heartedness is the most essential virtue on the spiritual journey.” — Matthew Fox

Matthew Fox is an American television and film actor best known for his role as ‘Charlie Salinger‘ in the teen and family drama series ‘Party of Five.’ The six-season series earned the ‘Golden Globe Award for Best Television Series – Drama.’

His second notable performance was in the television series ‘Lost,’ for which he gained significant praise and acclaim. In the series, his portrayal of ‘Jack Shephard’ gained him multiple prizes for best actor, as well as nominations for ‘Golden Globe’ and ‘Emmy’ Awards.

After ‘Lost,’ he vowed that he would no again work in television and would instead concentrate on his film career. Thank you for reading this Matthew Fox quote collection! Don’t forget to share them with your friends and family on social media.

Which are your favorite Matthew Fox Quotes? Leave a comment below.