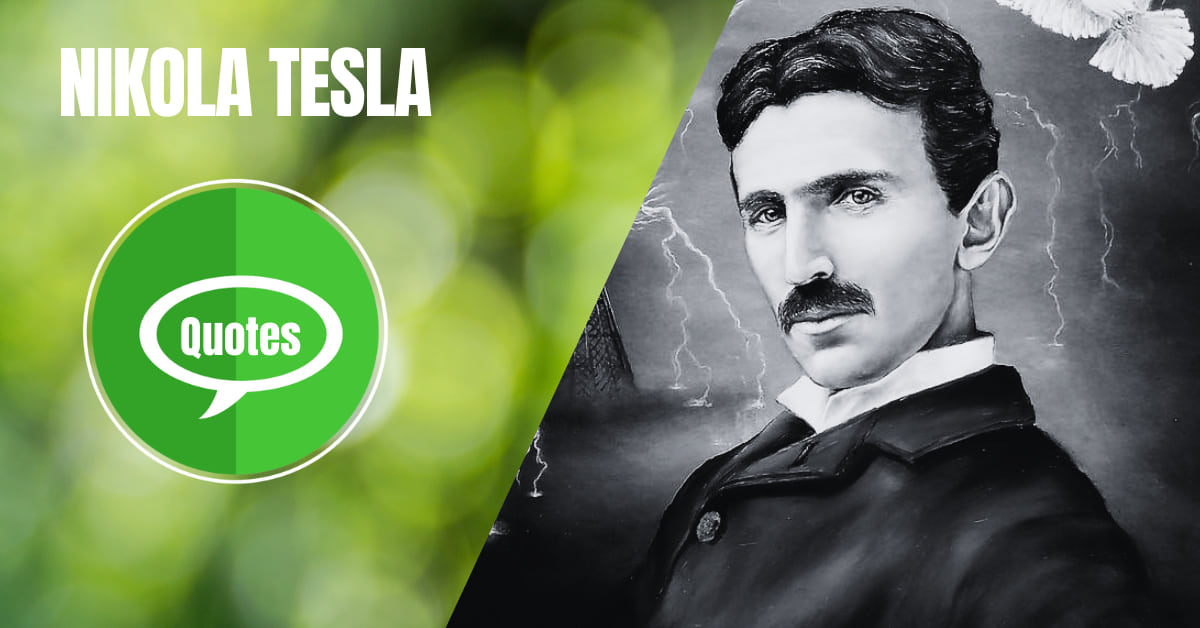 Nikola Tesla’s Quotes are the most influential and all-time favorite for most of us who know the power and work of this great man. Let’s grab the most inspiring quote and share ahead with all across our network.

Nikola Tesla was an inventor and engineer who held over 300 patents during his career. His most famous achievement, however, was the invention of alternating current, which laid the groundwork for future technologies.

Tesla was a witty and humorous man who would exchange amusing letters with friends. For example, after dining with friend Rudyard Kipling, he wrote this letter to an acquaintance.

Tesla was never interested in money; all he wanted was to provide free electricity to the entire world. However, such a project required investors, and despite finding them, they began to doubt his system. This resulted in bankruptcy, and the tower he had built had to be sold to pay off his debt.

Tesla demonstrated that anything is possible if you work hard enough; his legacy lives on to this day, and we will be eternally grateful to this brilliant mind. Here are some of our favourite curated Nikola Tesla Quotes to help you discover your inner genius and become the inventor of your dreams. 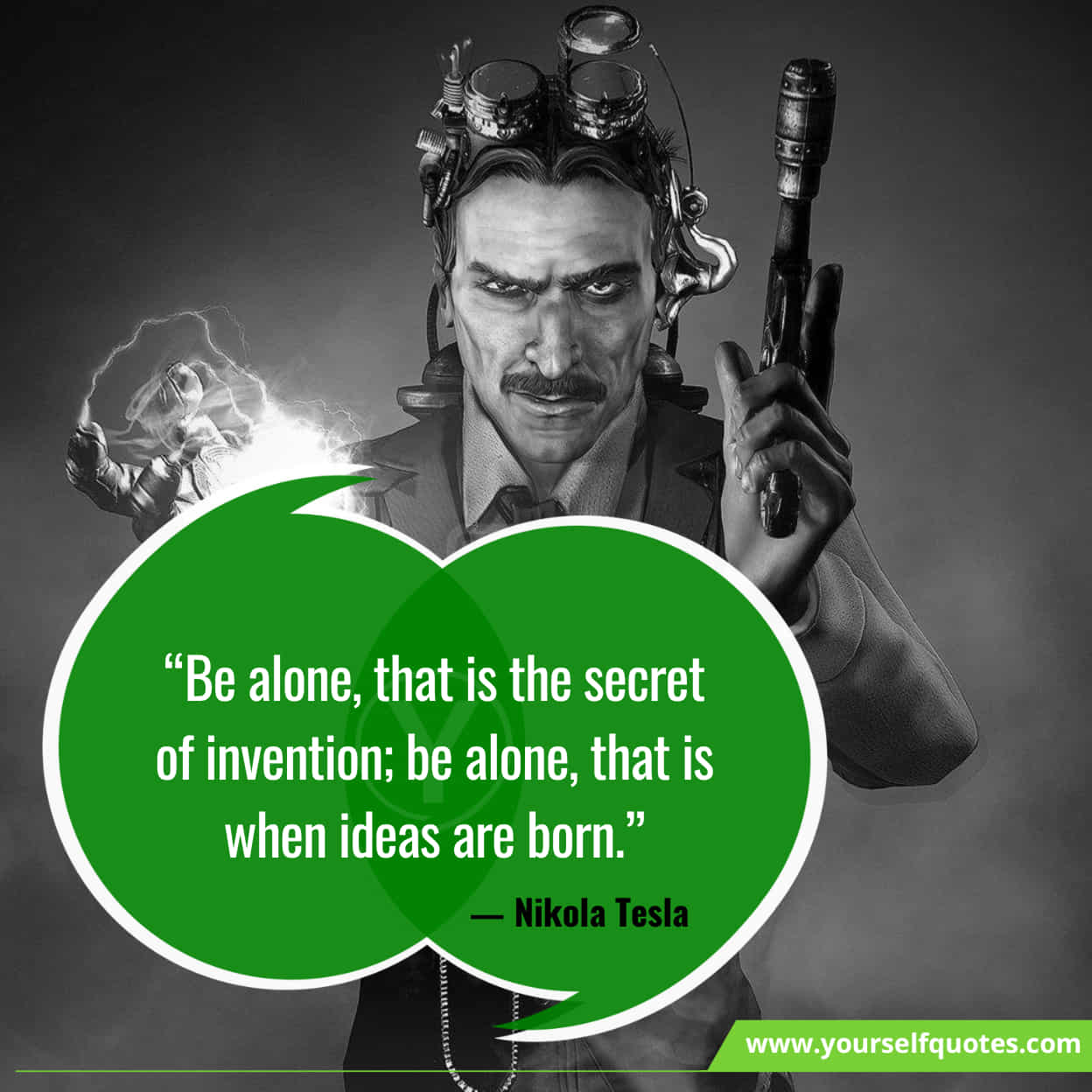 “Anti-social behaviour is a trait of intelligence in a world full of conformists.” ― Nikola Tesla

“To know each other, we must reach beyond the sphere of our sense perceptions.” ― Nikola Tesla

“If you want to find the secrets of the universe, think in terms of energy, frequency and vibration.” ― Nikola Tesla

“Our entire biological system, the brain, and the Earth itself work on the same frequencies.” ― Nikola Tesla

“Peace can only come as a natural consequence of universal enlightenment.” ― Nikola Tesla 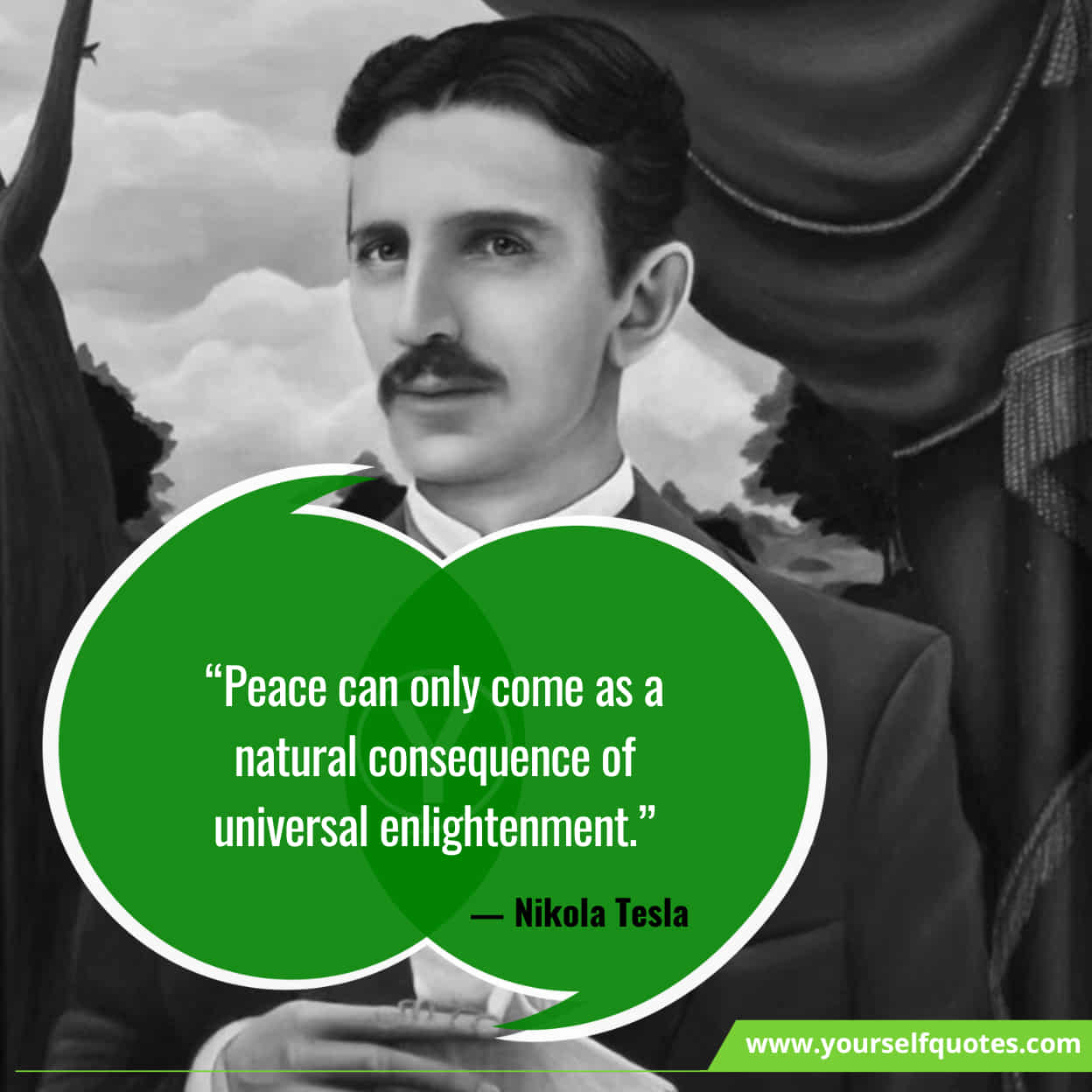 “Our virtues and our failings are inseparable, like force and matter. When they separate, man is no more.” ― Nikola Tesla

“If your hate could be turned into electricity, it would light up the whole world.” ― Nikola Tesla

“I could only achieve success in my life through self-discipline, and I applied it until my wish and my will became one.” ― Nikola Tesla

“The idea came like a flash of lightning and in an instant, the truth was revealed.” ― Nikola Tesla 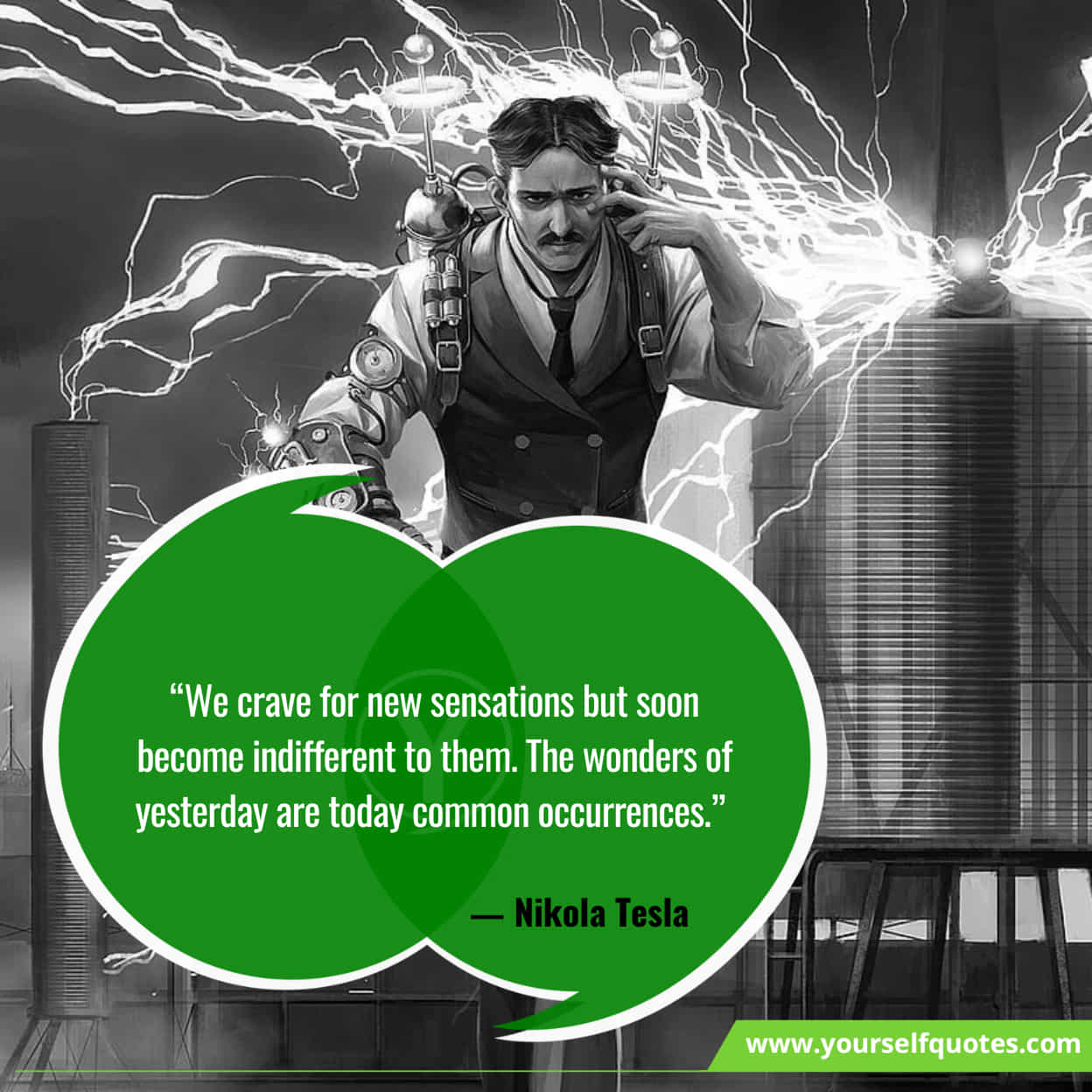 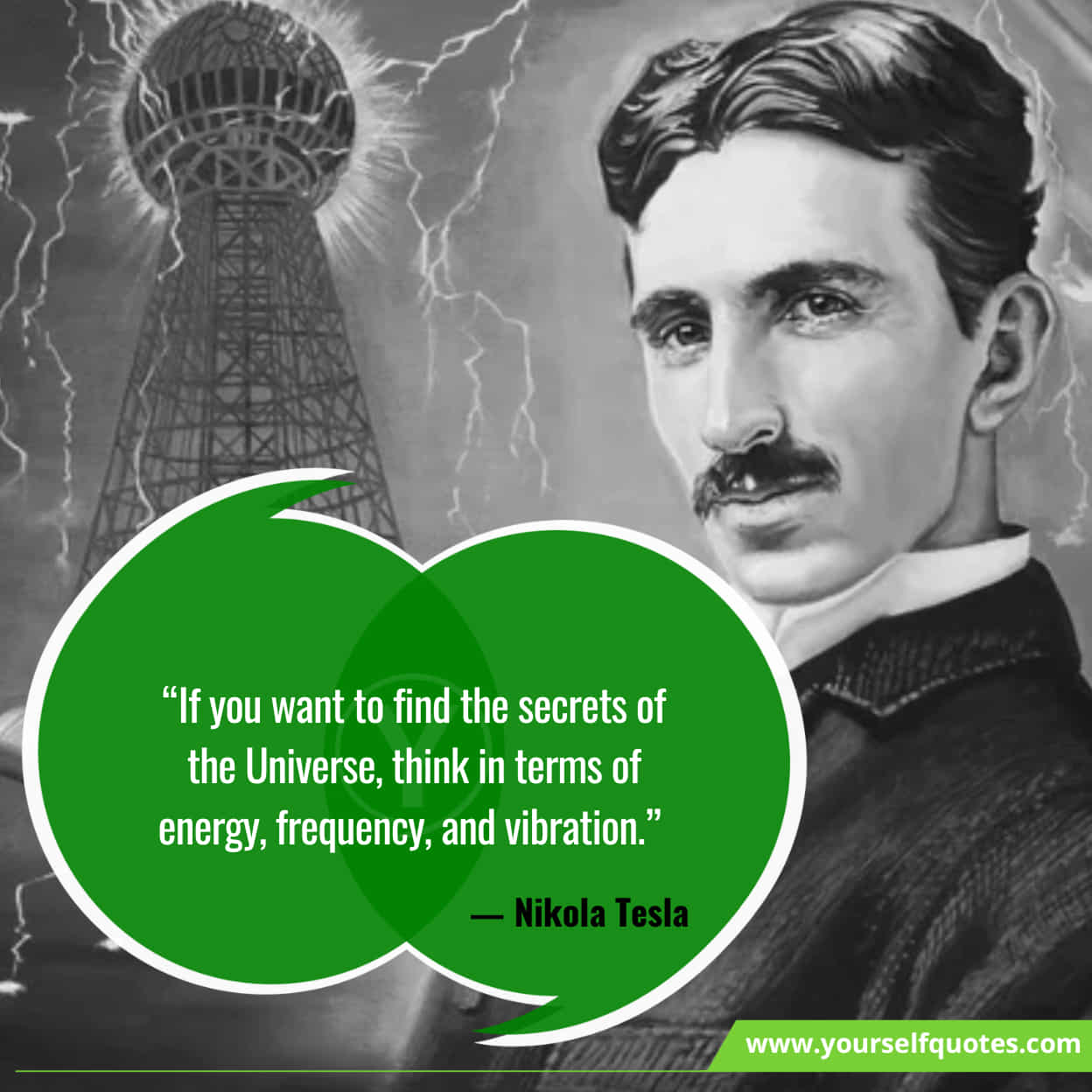 “Science is but a perversion of itself unless it has as its ultimate goal the betterment of humanity.” ― Nikola Tesla 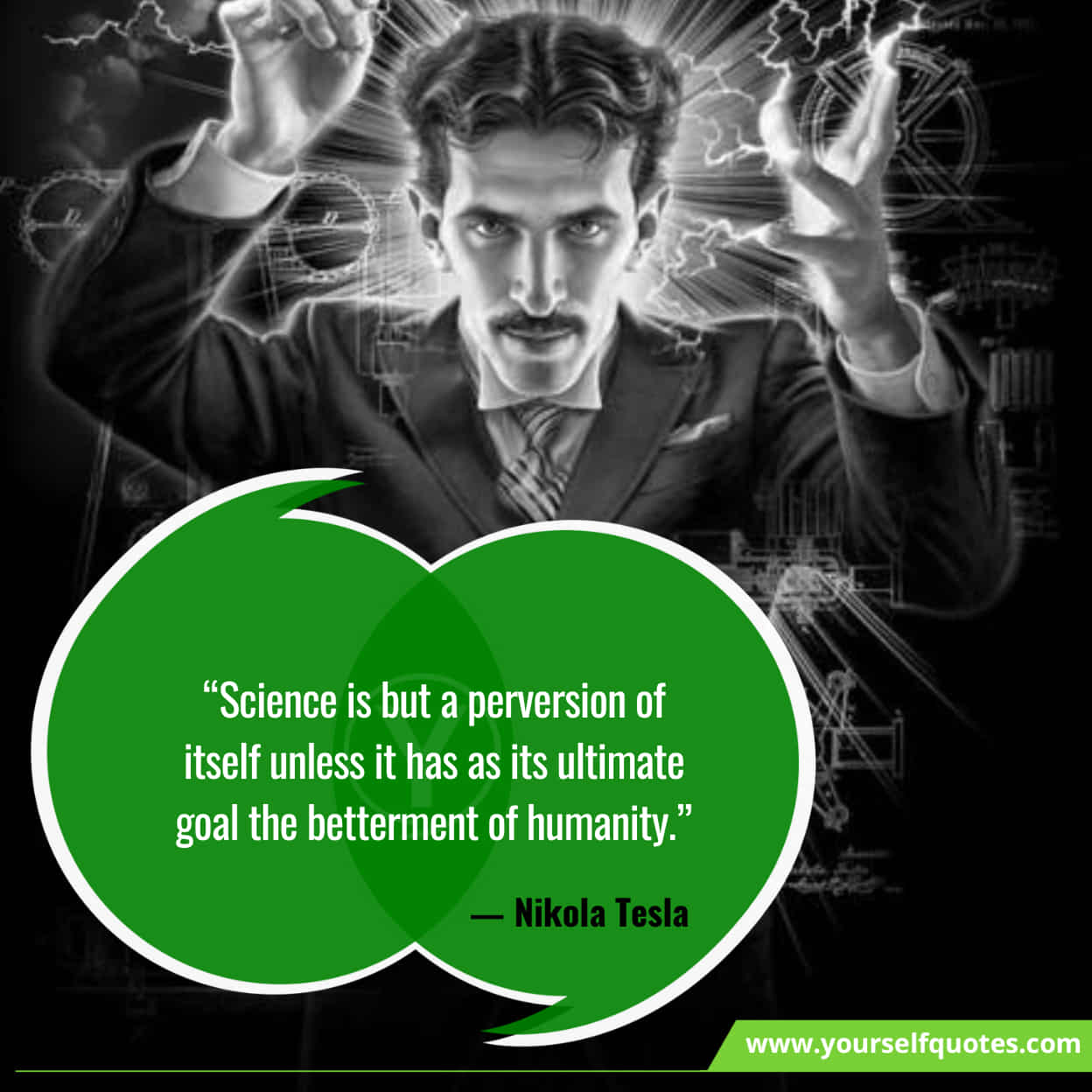 “The progressive development of man is vitally dependent on invention.” ― Nikola Tesla

“When natural inclination develops into a passionate desire, one advances towards his goal in seven-league boots.” ― Nikola Tesla

“One has to be sane to think clearly, but one can think deeply and be quite insane” ― Nikola Tesla

“A new idea must not be judged by its immediate results.” ― Nikola Tesla

“If you only knew the magnificence of the 3, 6 and 9, then you would have a key to the universe.” ― Nikola Tesla 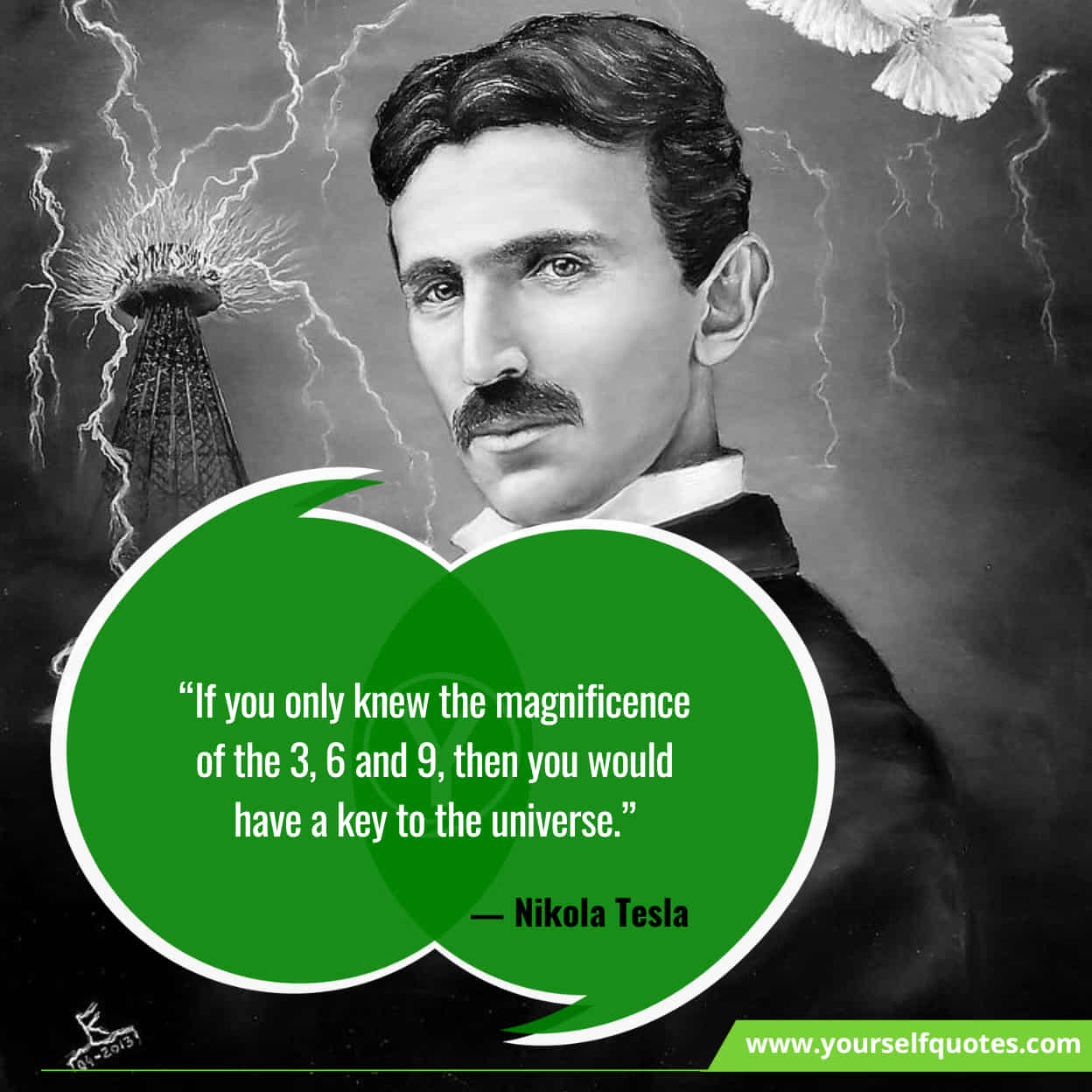 “Our virtues and our failings are inseparable, like force and matter. When they separate, man is no more.” ― Nikola Tesla

“One’s salvation could only be brought about through his own efforts.” ― Nikola Tesla

“Merciless is the law of nature, and rapidly and irresistibly we are drawn to our doom.” ― Nikola Tesla

“Soon became convinced I was right and undertook the task with all the fire and boundless confidence of youth.” ― Nikola Tesla

“Universal peace is a beautiful dream, but not at once realizable.” ― Nikola Tesla 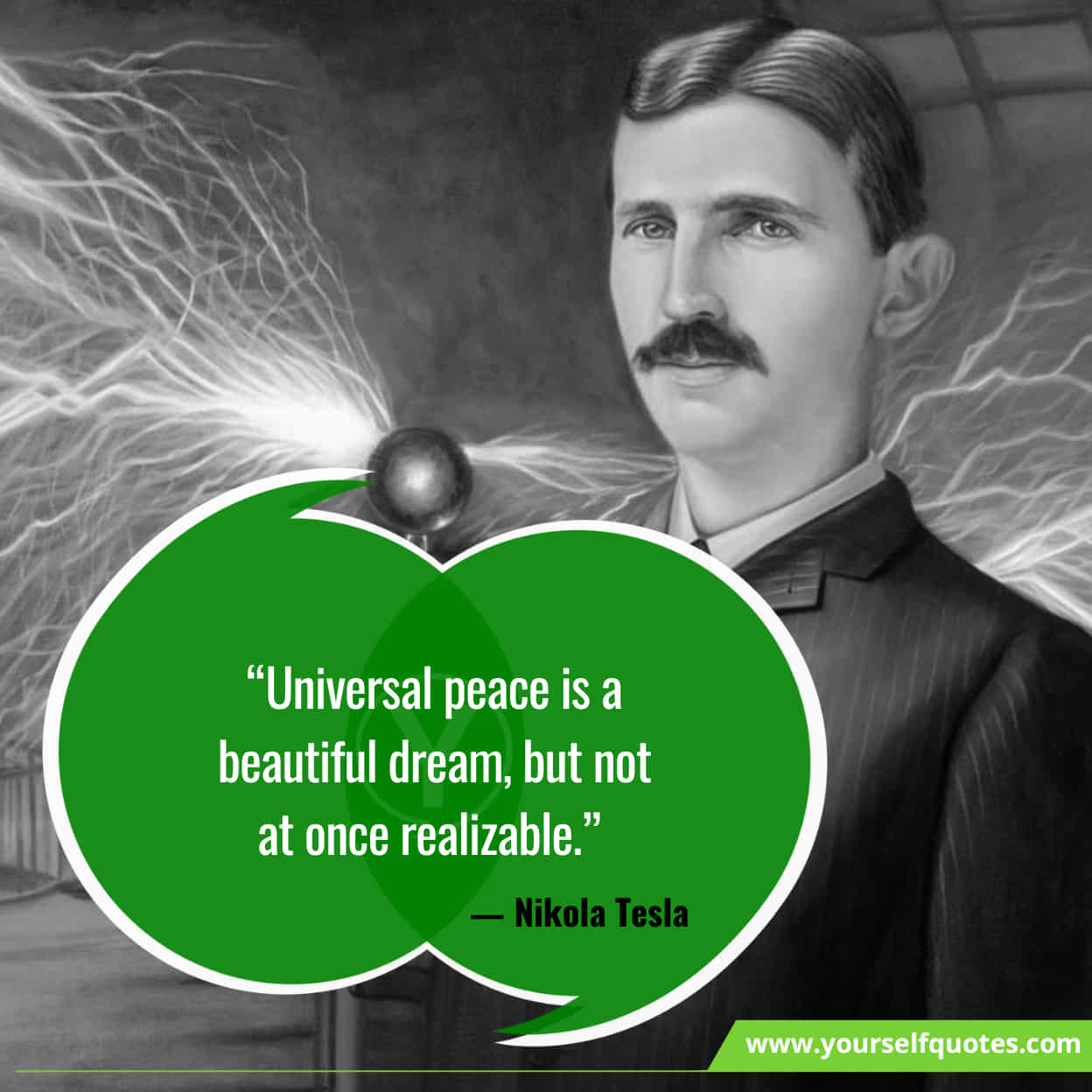 “We should effect a radical reform in the character of the food.” ― Nikola Tesla

“Now the soft-voiced, gentle woman of my reverent worship has all but vanished.” ― Nikola Tesla

“All of these years of my service towards mankind did not bring me anything but assaults and humiliations.” ― Nikola Tesla

“Every effort under compulsion demands a sacrifice of life-energy. I never paid such a price. On the contrary, I have thrived on my thoughts.” ― Nikola Tesla

“One of the most gratifying results of intellectual evolution is the continuous opening up of new and greater prospects.” ― Nikola Tesla 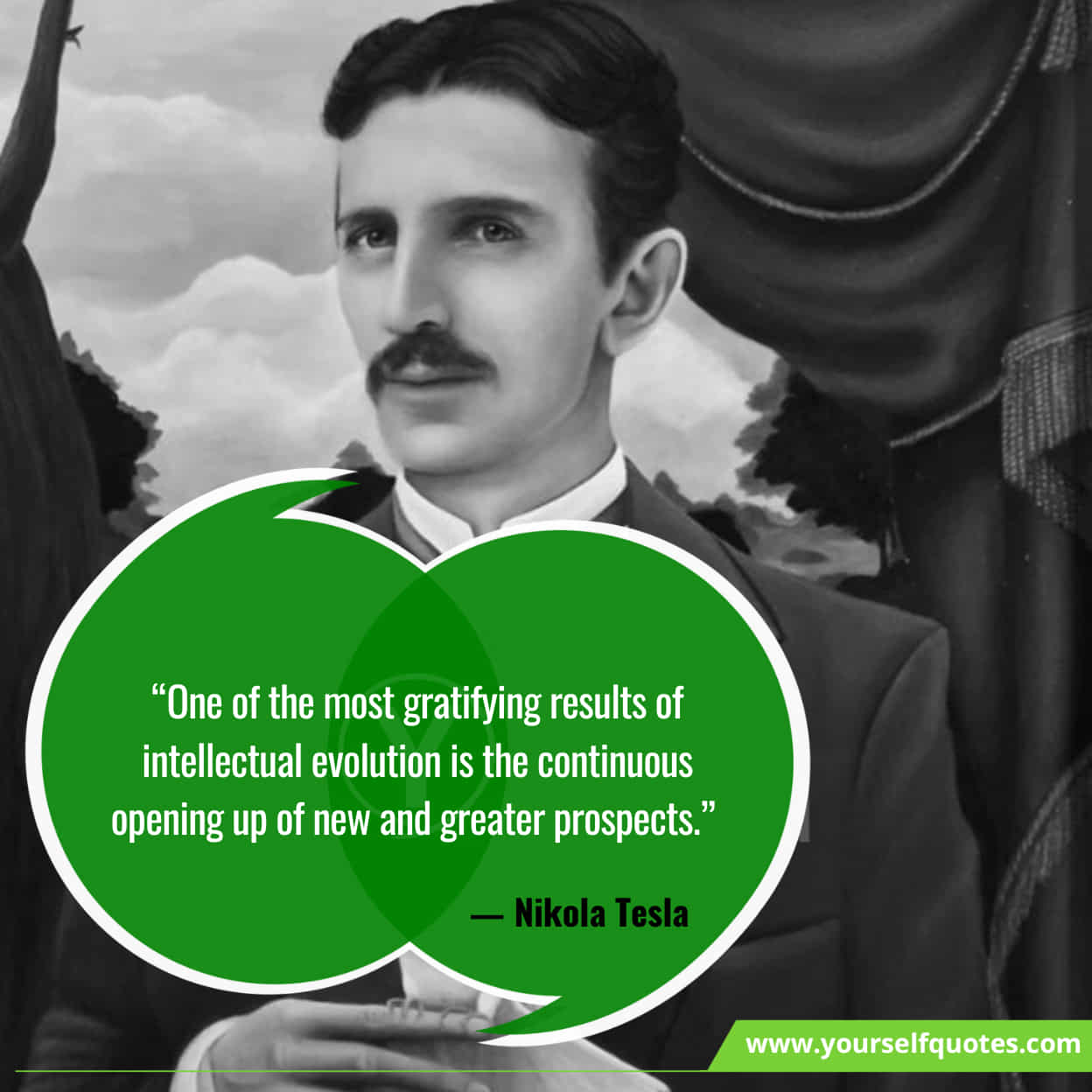 “Our bodies are of such complexity of structure, the motions we perform are so numerous and involved.” ― Nikola Tesla

“Anti-social behaviour is a trait of intelligence in a world full of conformists.” ― Nikola Tesla

“The… development of man ultimate purpose, the complete mastery of mind over the material world.” ― Nikola Tesla

“If you only knew the magnificence of the 3,6 and 9, then you would have the key to the universe.” ― Nikola Tesla

“Love: I recognize the emotion for what it is, an irrational self-destructive impulse, which is disguised as joy.” ― Nikola Tesla 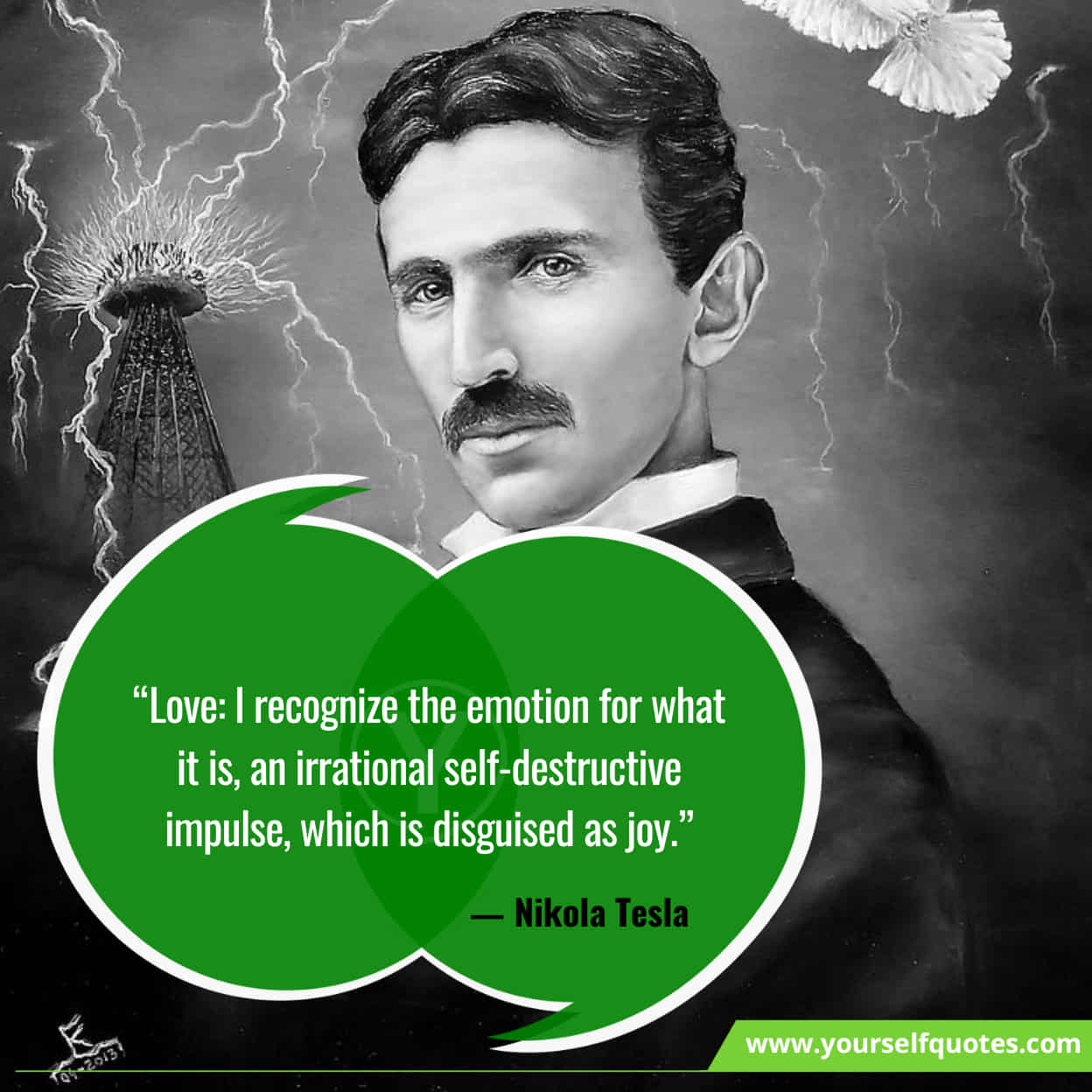 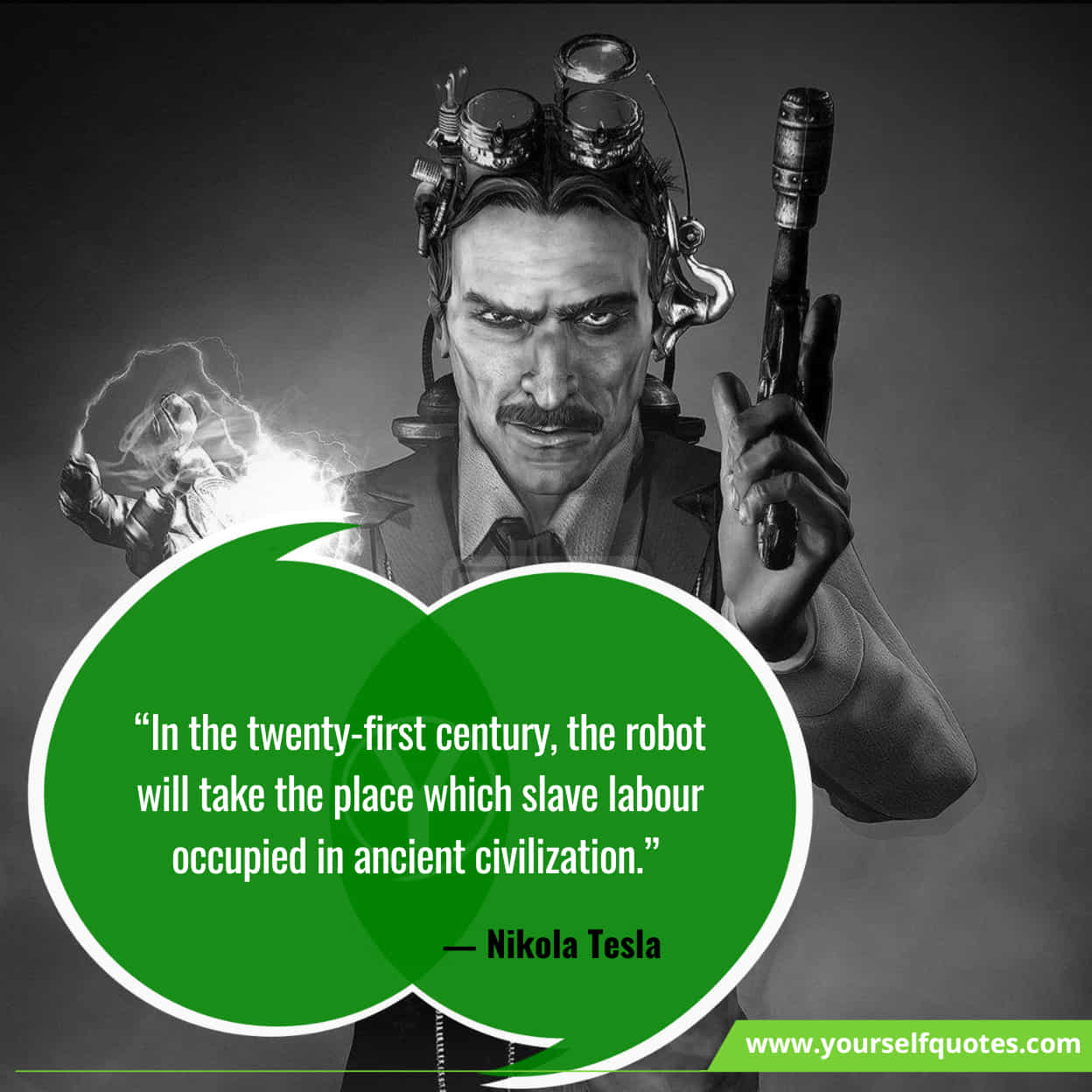 Nikola Tesla was a Serbian-American inventor, electrical engineer, mechanical engineer, and futurist best known for his contributions to the modern alternating current power supply system. These Nikola Tesla quotes will motivate and inspire you throughout your life.

He left us with modern alternating current electricity design schemes that are the foundation of our current AC electricity supply systems, as well as a wealth of wisdom for those who would follow in his footsteps.

Share out these most inspirational and motivational Nikola Tesla Quotes with your network to inspire them and think big in all fronts of life.

Which are your favorite Nikola Tesla Quotes? Leave a comment below.

Heart-touching Miss You Messages and Quotes for Friends