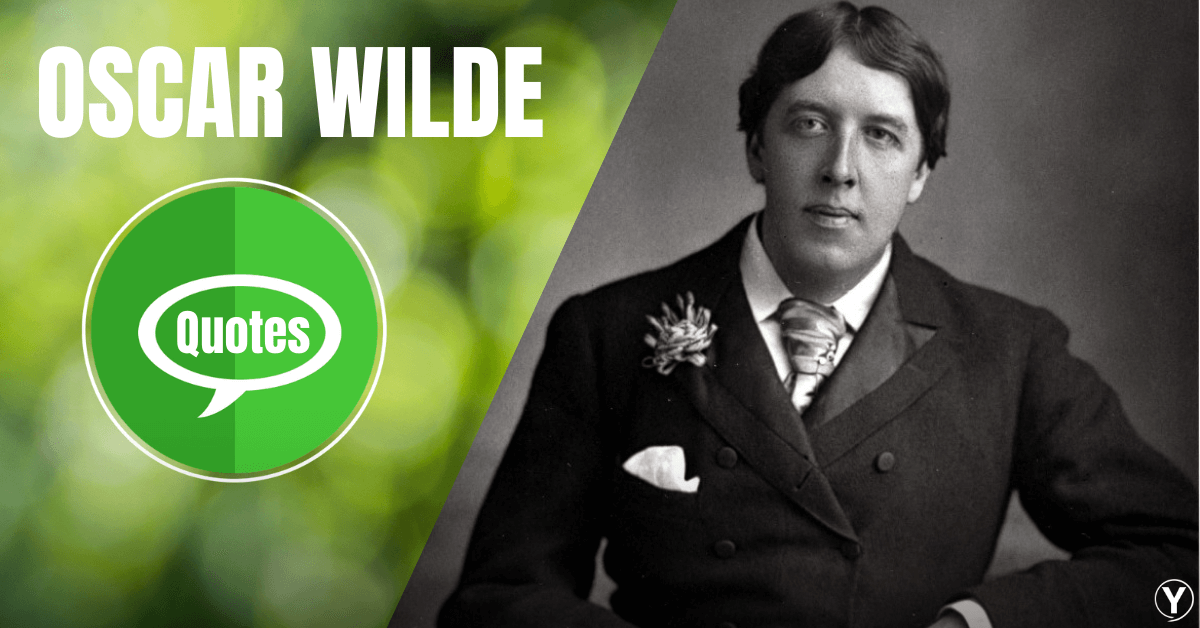 Oscar Fingal O’Flahertie Wills Wilde popularly known as Oscar Wilde was a notable Irish poet and playwright. He is best memorized for his epigrams and plays, his novel The Picture of Dorian Gray, and the circumstances of his criminal conviction for “gross indecency“, imprisonment.

Oscar was born on 16th October 1854 in Dublin, Ireland. Oscar was born in an Anglo-Irish family. He was born to Sir William Wilde, who was Ireland’s leading photo-ophthalmologic (ear and eye) surgeon, and Jane Wilde, who wrote poetry for the revolutionary Young Irelanders in 1848.

Oscar was very fluent in French and German. He was an excellent academician and classicist at Trinity College Dublin and then at Oxford.

The poet was known for his intense involvement in the rising philosophy of aestheticism, led by two of his tutors, Walter Pater and John Ruskin. He proved himself as a great spokesman for aestheticism. His deep interest in various literary activities made him popular. He published a book of poems, lectured in the United States and Canada on the new “English Renaissance in Art” and interior decoration. Wilde became one of the remarkable personalities of his time because of his biting wit, flamboyant dress, and glittering conversational skill.

Oscar’s love for literary and poetic devices is well-known and recognized by all. So let’s take our mind walk through the most poetic Oscar Wilde Quotes.

“Life is far too important a thing ever to talk seriously about.” — Oscar Wilde

“If you are not too long, I will wait here for you all my life.” — Oscar Wilde

“A gentleman is one who never hurts anyone’s feelings unintentionally.” — Oscar Wilde

“Success is a science; if you have the conditions, you get the result.” — Oscar Wilde

“The world is divided into two classes, those who believe the incredible, and those who do the improbable.” — Oscar Wilde

“I have the simplest tastes. I am always satisfied with the best.” — Oscar Wilde

“Always forgive your enemies – nothing annoys them so much.” — Oscar Wilde

“The world was my oyster but I used the wrong fork.” — Oscar Wilde

“There are only two tragedies in life: one is not getting what one wants, and the other is getting it.” — Oscar Wilde

“To love oneself is the beginning of a lifelong romance.” — Oscar Wilde

“Experience is simply the name we give our mistakes.” — Oscar Wilde 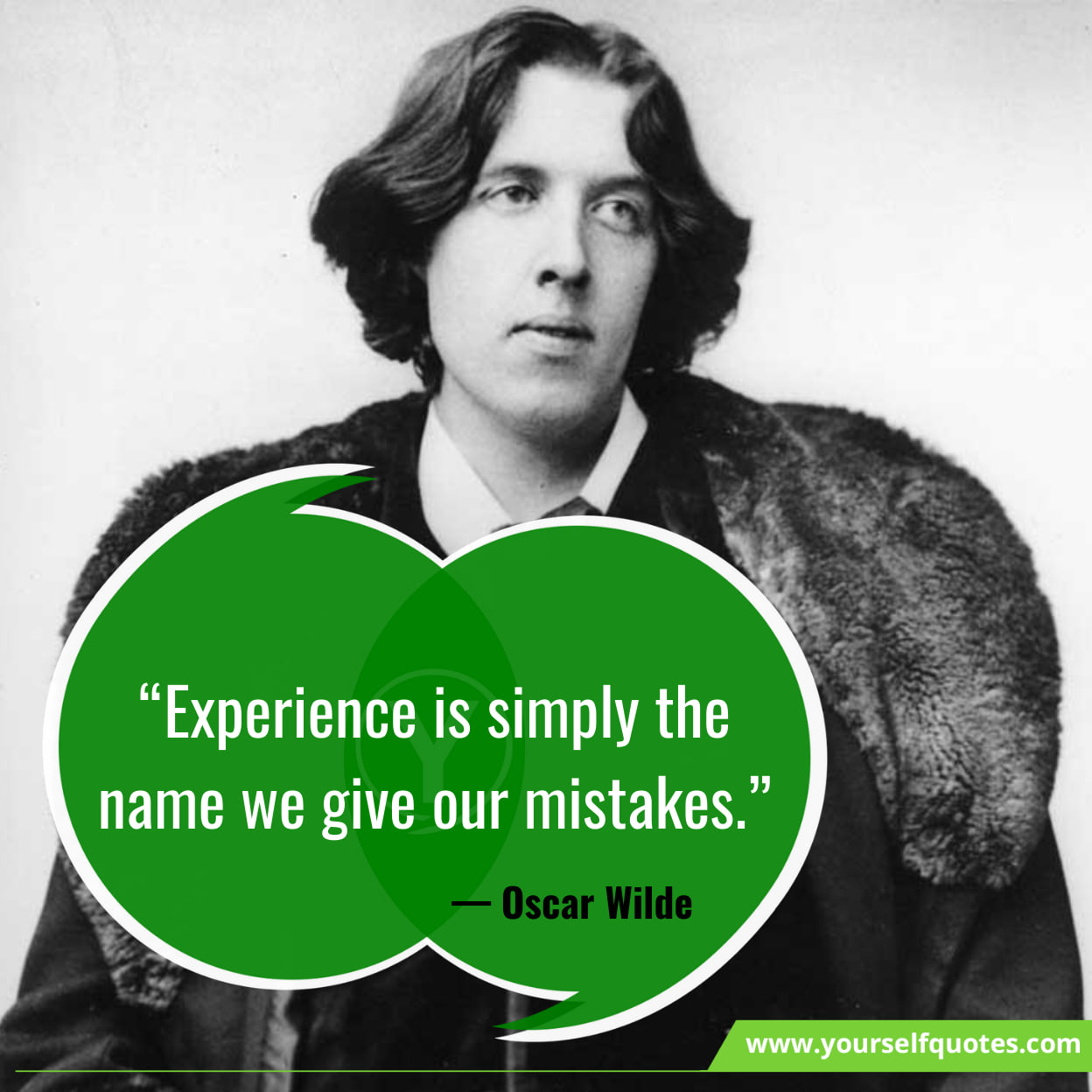 “I put all my genius into my life I put only my talent into my works.” — Oscar Wilde

“I hate people who are not serious about meals. It is so shallow of them.” — Oscar Wilde

“To live is the rarest thing in the world. Most people exist, that is all.” — Oscar Wilde

“Most people are other people. Their thoughts are someone else’s opinions, their lives a mimicry, their passions a quotation.” — Oscar Wilde

“When I was young I thought that money was the most important thing in life; now that I am old I know that it is.” — Oscar Wilde

“A pessimist is somebody who complains about the noise when opportunity knocks.” — Oscar Wilde 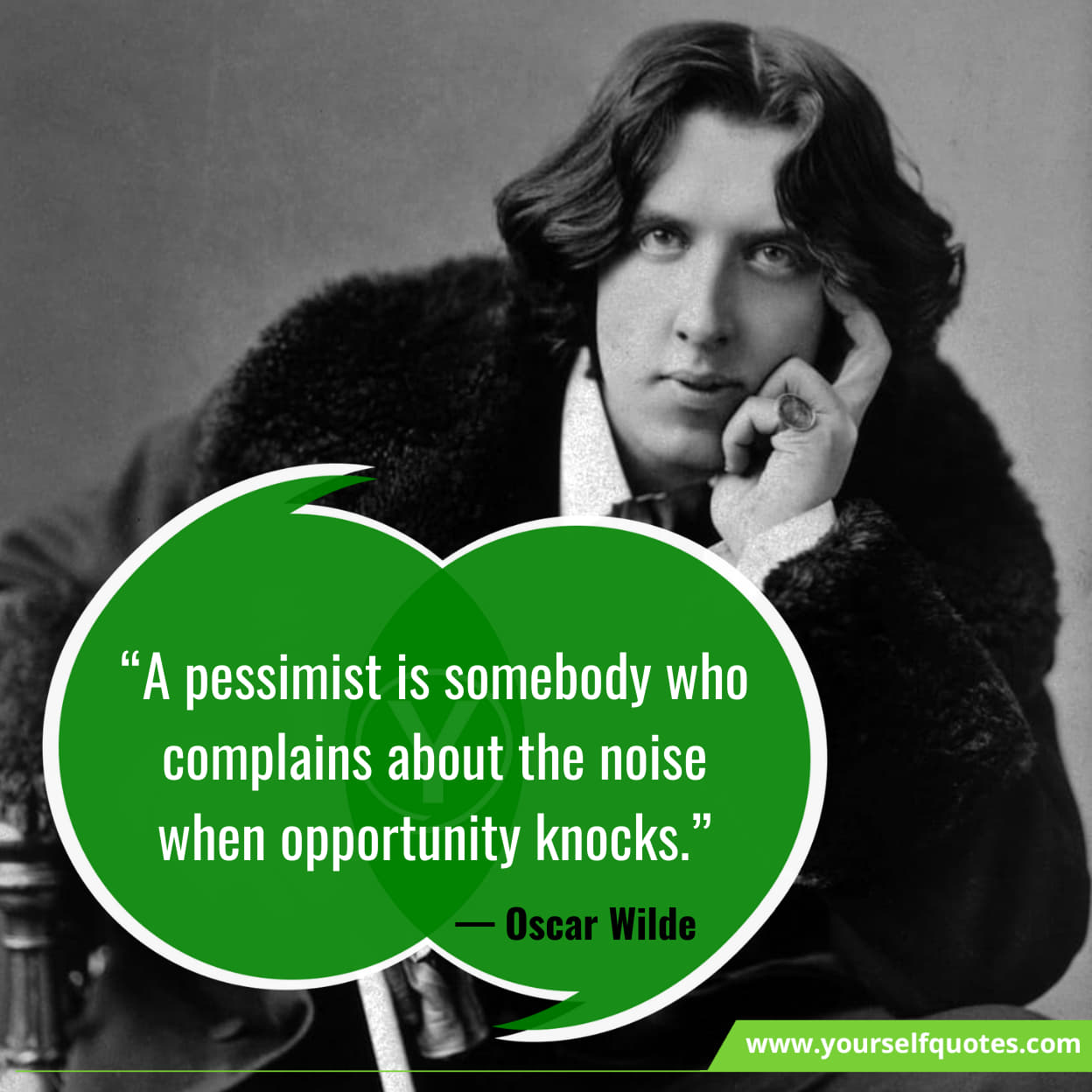 “A little sincerity is a dangerous thing, and a great deal of it is absolutely fatal.” — Oscar Wilde

“How can a woman be expected to be happy with a man who insists on treating her as if she were a perfectly normal human being?” — Oscar Wilde

“Morality is simply the attitude we adopt towards people whom we personally dislike.” — Oscar Wilde

“Ordinary riches can be stolen, real riches cannot. In your soul are infinitely precious things that cannot be taken from you.” — Oscar Wilde

“Be yourself; everyone else is already taken.” — Oscar Wilde 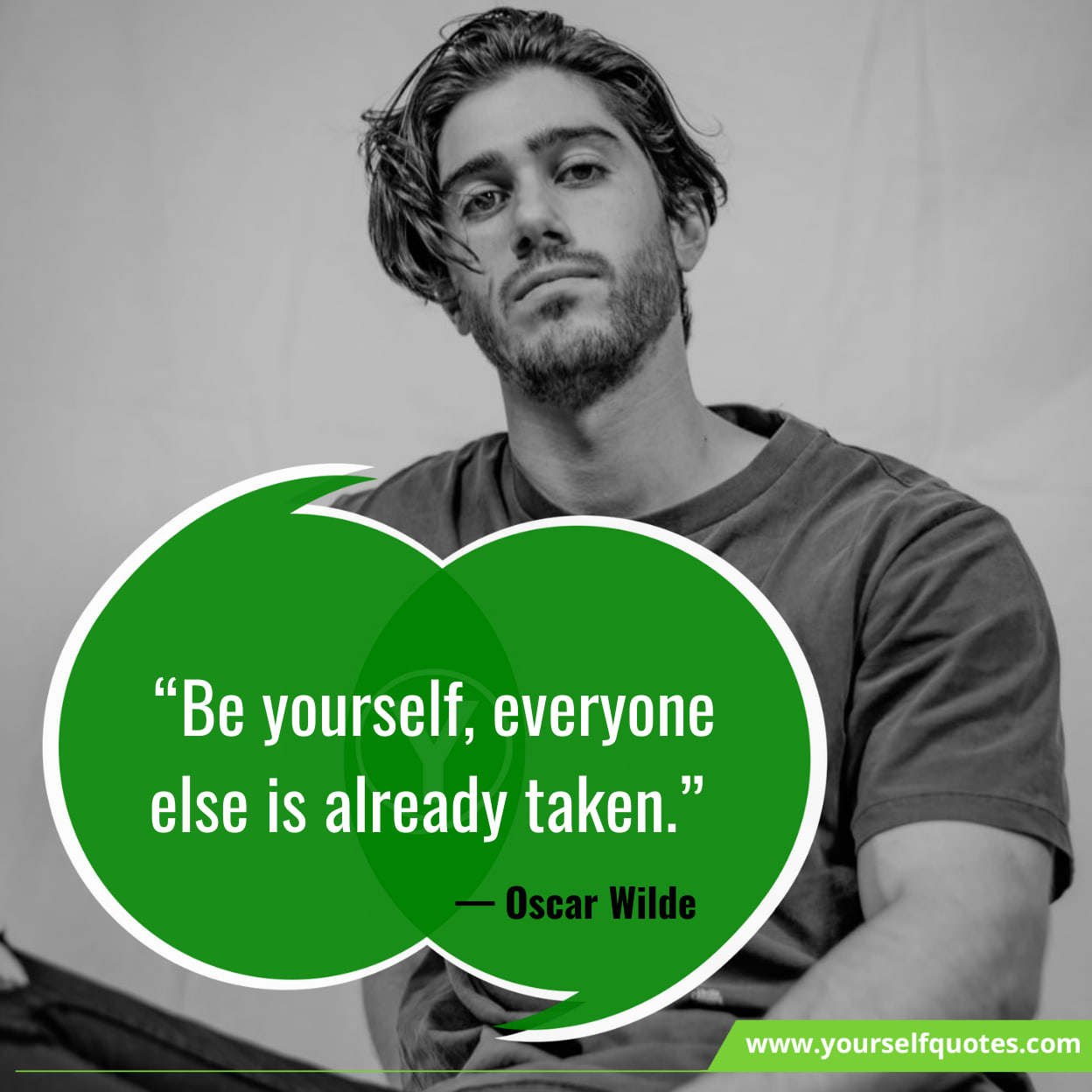 “This suspense is terrible. I hope it will last.” — Oscar Wilde

“All bad poetry springs from genuine feeling. To be natural is to be obvious, and to be obvious is to be inartistic.” — Oscar Wilde

“The action of forgiveness will teach you empathy with others.” — Oscar Wilde

“Always forgive your enemies; nothing annoys them so much.” — Oscar Wilde

“I can resist everything except temptation.” — Oscar Wilde

“There is a luxury in self-reproach. When we blame ourselves, we feel no one else has a right to blame us.” — Oscar Wilde

“Whenever a man does a thoroughly stupid thing, it is always from the noblest motives.” — Oscar Wilde 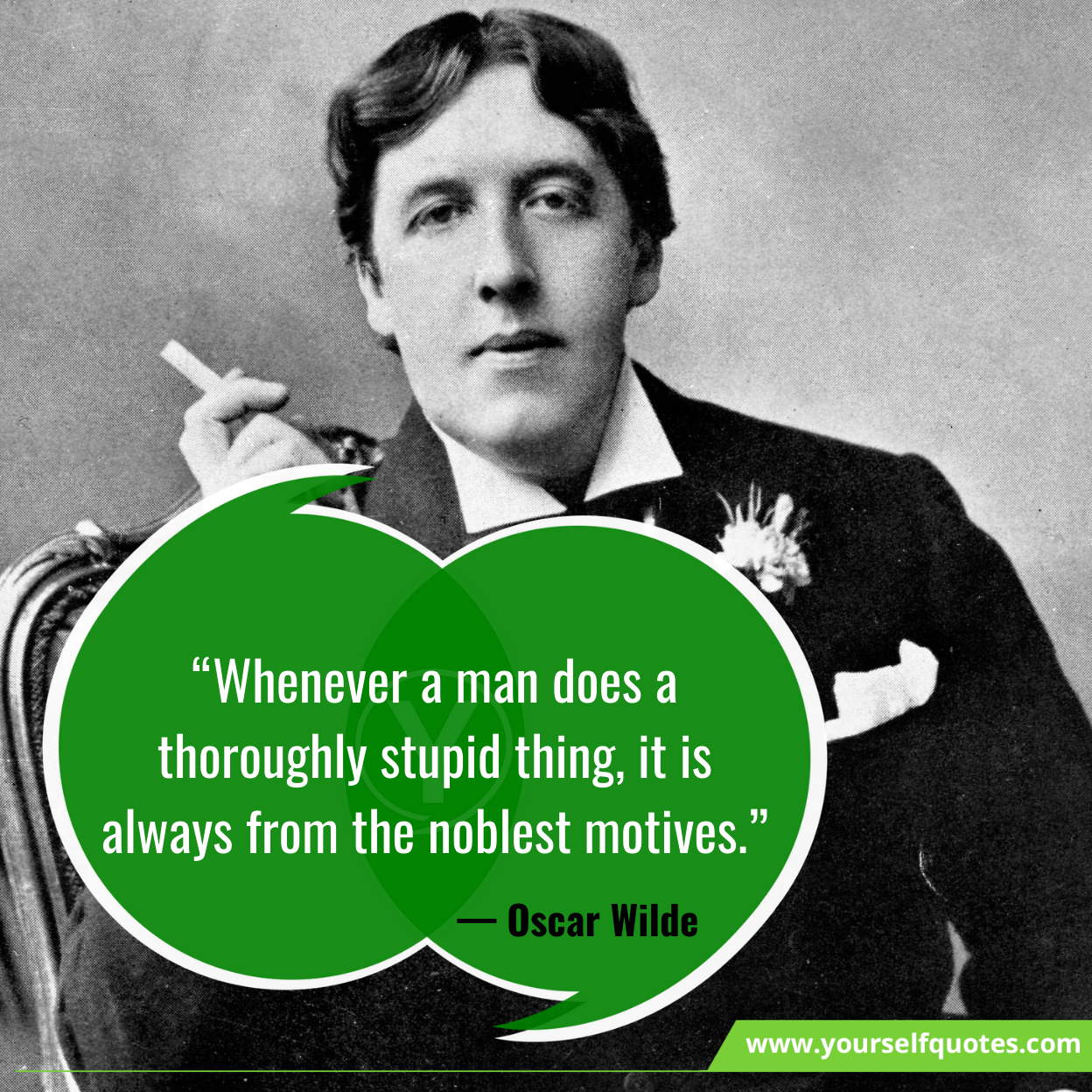 “There are moments when one has to choose between living one’s own life, fully, entirely, completely-or dragging out some false, shallow, degrading existence that the world in its hypocrisy demands.” — Oscar Wilde

“The final mystery is oneself. When one has weighed the sun in the balance, measured the steps of the moon, and mapped out the seven heavens star by star, there still remains oneself. Who can calculate the orbit of his own soul?” — Oscar Wilde

“Fashion is a form of ugliness so intolerable that we have to alter it every six months.” — Oscar Wilde

“If one cannot enjoy reading a book over and over again, there is no use in reading it at all.” — Oscar Wilde

Oscar Wilde is known for his outstanding literary work and excellent poetry skills. He climbed the ladder of fame and success through his remarkable and noteworthy work. In 1884 he married Constance Lloyd and was blessed with two kids Cyril Holland and Vyvyan Holland.

Oscar Wilde had counted himself as one of the most successful and best writers in the world, but he also had to face many disappointments and sufferings in his life.
He believed that success is a science, if the circumstances are there then the result will be found. His thoughts are motivating to move forward in life.

Wilde’s parents were Anglo-Irish intellectuals in Dublin. A young Wilde learned to speak fluent French and German. At university, Wilde read Greats; he demonstrated himself to be an exceptional classicist, first at Trinity College Dublin, then at Oxford. He became associated with the emerging philosophy of aestheticism, led by two of his tutors, Walter Pater and John Ruskin. After university, Wilde moved to London into fashionable cultural and social circles.

The great poetic talent took his last breath on 30th November 1900. The poet is still remembered and his literary work is loved by all to date.

Some of the famous poems such as ‘Requiescat‘, ‘The Burden of Itys‘, ‘The Garden of Eros‘, ‘A Villanelle‘, ‘The Sphinx‘, ‘The Ballad of Reading Gaol‘, etc. are still remembered by all.

Hope you enjoyed reading the best poetic words by Oscar Wilde. If yes, then do share these literary Oscar Wilde Quote Images with your friends, family, and loved ones.

Thursday Quotes That Will Inspire You To Work Smart