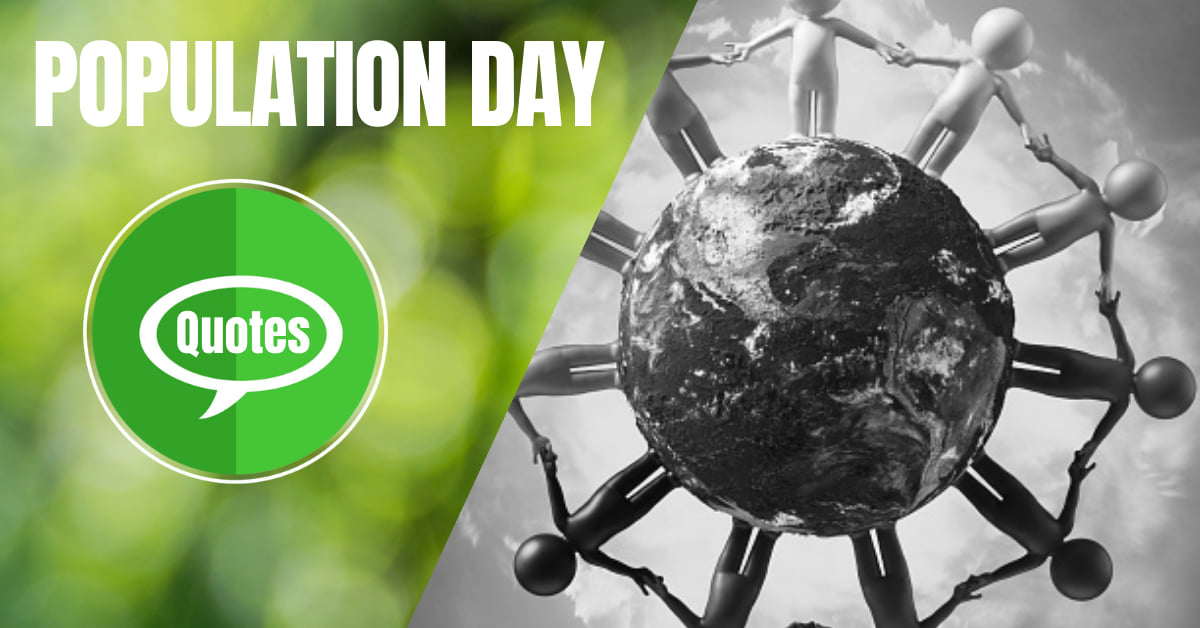 On July 11, the entire world celebrates world population day. We all must increase consciousness about the reproductive health needs and susceptibilities of women. And during the pandemic, the need for the same is even more. The day focuses upon the importance and urgency of population issues worldwide.

In 1989 the governing council of the united nation development program established the day. And ever since, population day is making people aware of their relations to the environment and development.

What Is the Background of World Population Day?

The growing population is indeed a threat to natural resources. It also destroys the sustainability of the world. When world population day started being celebrated, it also looked at the opportunity to celebrate the spirit of brotherhood.

Some Facts You Must Know About World’s Population

The population worldwide is growing out of control. And it is necessary to spread awareness about family planning. This is the only way to counteract poverty and to ensure proper maternity care. The existing population growth is causing heinous crimes in many parts of the world. And we are experiencing issues related to human rights and gender equality. As more people come into the world, there are more and more right violations such as child labor and human trafficking.

Celebrating world population day is a reminder to ourselves that we are a part of an ever-growing world. We also need to ensure that there is a great future ahead, and we need to take care of that altogether. 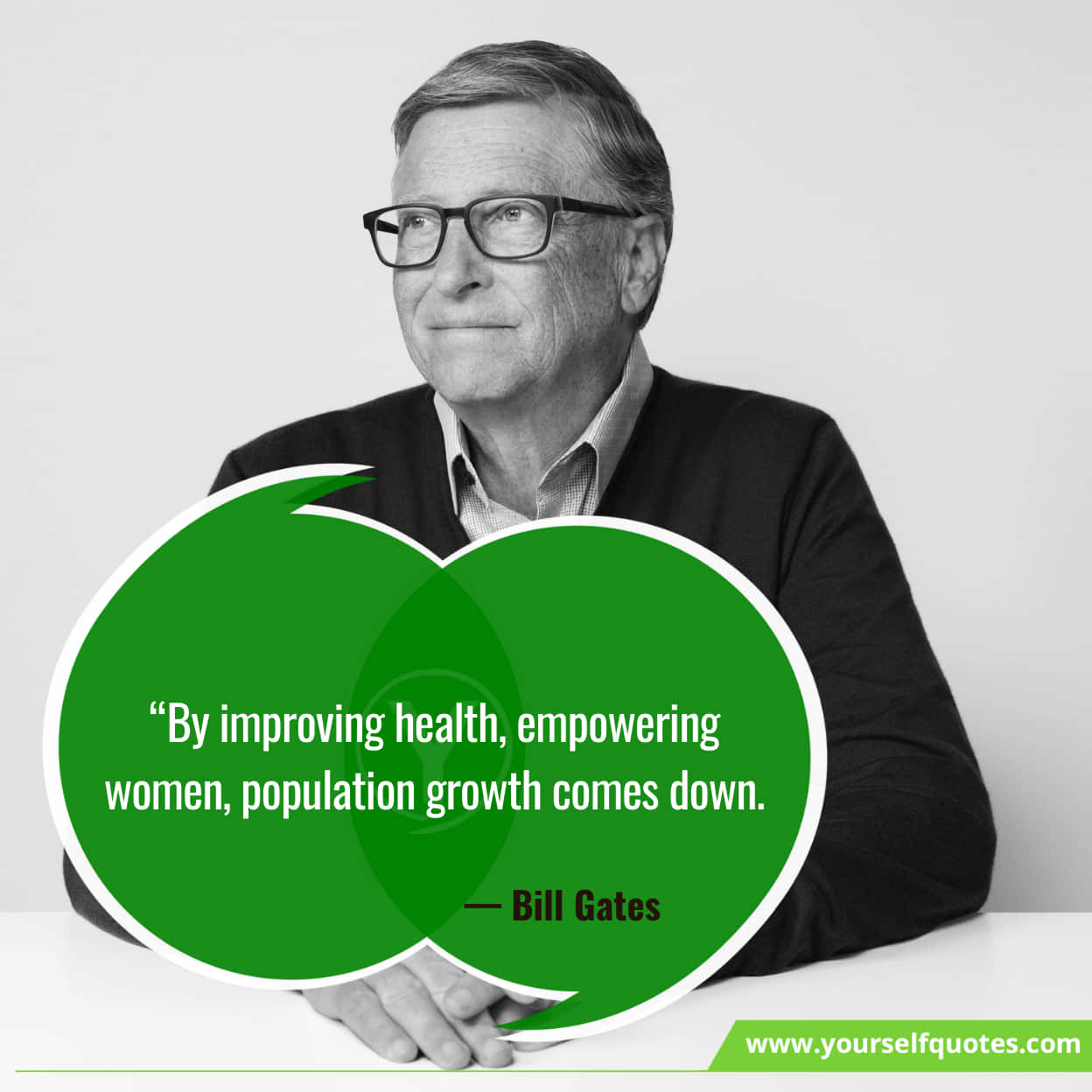 “ Yet food is something that is taken for granted by most world leaders despite the fact that more than half of the population of the world is hungry. ”

“Our human population continues to expand at such a scary rate – it’s unbelievable.” — Bindi Irwin

“We need to continue to decrease the growth rate of the Global Population. The Plant can not support many more people.”

“The power of population is indefinitely greater than the power in the earth to produce subsistence for man.” — Thomas Malthus

“Our object must be to bring our territory into harmony with the numbers of our population.”

“To save the world, to protect the tomorrow, we have to control the population today.”

“Population has become the greatest challenge for mankind, and we must act towards it. Happy World Population Day to you.”

“The Power Of Population Is Indefinitely Greater Than The Power In The Earth To Produce Subsistence For Man.” 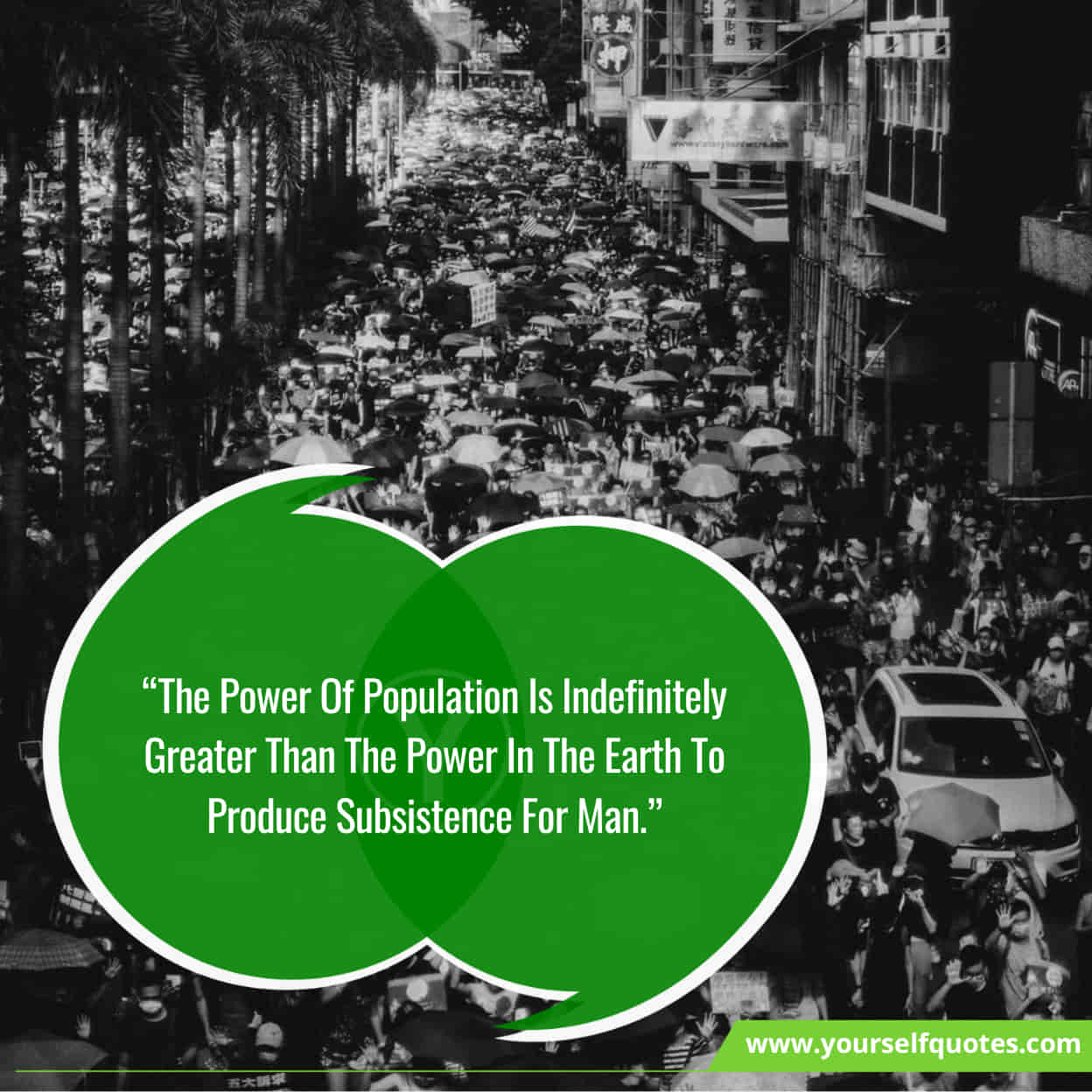 “Our Human Population Continues To Expand At Such A Scary Rate – It’s Unbelievable.” — Bindi Irwin

“We Need To Continue To Decrease The Growth Rate Of The Global Population. The Plant Can Not Support Many More People.”

“Population Growth Is The Primary Source Of Environmental Damage.”

“When The Family Is Small, Whatever Little They Have They Are Able To Share. There Is Peace.” — Philip Njuguna

“Times Are Gone When We Could Relax And Take It Easy. It Is Time To Act And Act Strongly To Control The Growth Of The Population To Help Our Coming Generations.”

“To Save The World, To Protect The Tomorrow, We Have To Control The Population Today.”

“Rapid Population Growth And Technological Innovation, Combined With Our Lack Of Understanding About How The Natural Systems Of Which We Are A Part Work, Have Created A Mess.”

“If we have to save the earth and ourselves, then we have to reduce the population growth, Happy World Population Day.” 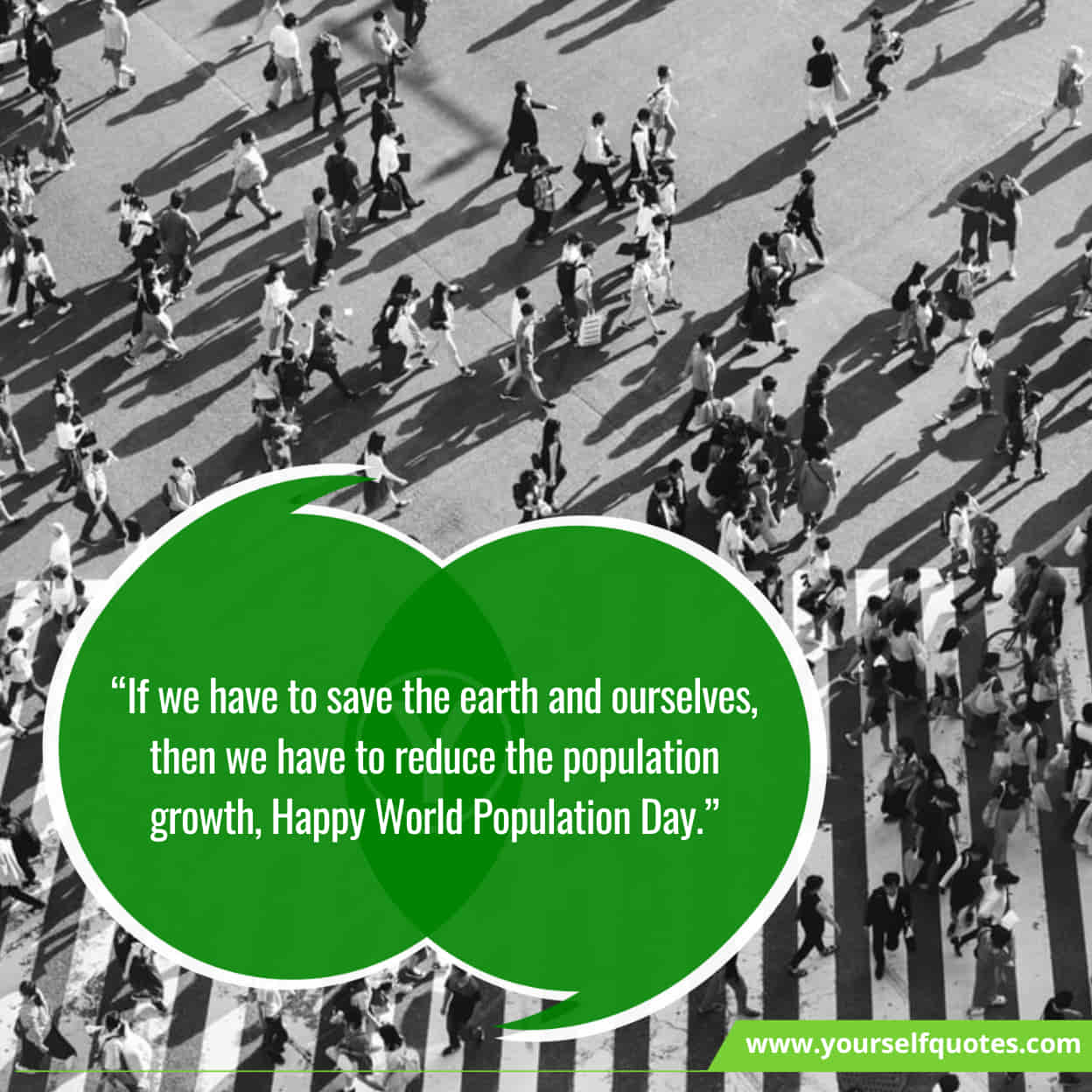 “Everything becomes easy with everyone’s cooperation, together we will fight this problem, Happy World Population Day.”

“Earth is the best place to live, but due to the increase in population, the earth is becoming a burden.”

“We need to spread awareness about population growth by bringing the world together, Happy World Population Day.”

“Take care of the children that we already have instead of increasing the population. Wish you a very happy World Population Day.”

“Best Wishes on the World Population Day for everyone. Smart planning of population can be the best gift for our children.”

“Control overpopulation to remain away from starvation. World Population Day!.”

“When the family is small, they are able to share what they have, Happy World Population Day.”

“The best way for the good of the world is that we all control the population growth and together do good to the world, Happy World Population Day.”

“Work towards raising awareness against overpopulation to save our planet, Happy World Population Day.” 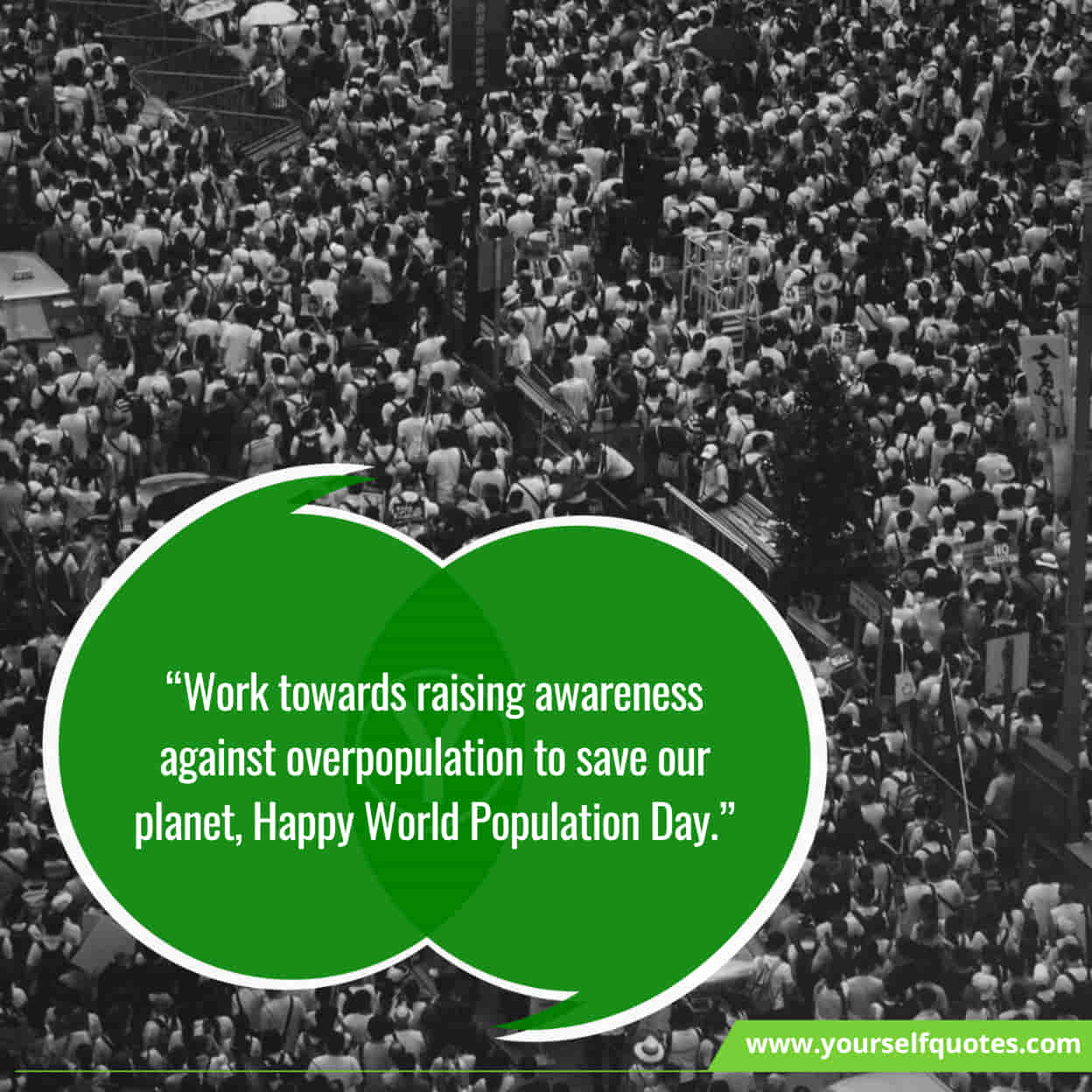 “Take part in World Population Day campaign to save Earth from becoming overcrowded.”

“Better to control the population than seeing it receding by nature or man-made disaster.”

“Fewer children, small family, this is the basis of progress.”

“Adopting a child is a much better idea than giving birth to a child.”

“Save the planet by not overflowing it with people. Enjoy the World Population Day.”

“Be responsible to manage the population before nature takes the responsibility into its hand.”

“Resources for all, happiness for all…. Let us control the ever-growing population!!!”

“Make a wish on World Population Day to enjoy a future that is less crowded.”

“The best decision is to raise a balanced family.”

“If you wish to have more than two children, then adoption is the best thing to do.”

“It is very easy to add more heads to the world, but very difficult to maintain them.”

“Enjoy the future tomorrow by controlling the population today.”

“Control overpopulation to have space and resources for one and all.”

“Population has become the greatest challenge for mankind and we must act towards it. Happy World Population Day to you.” 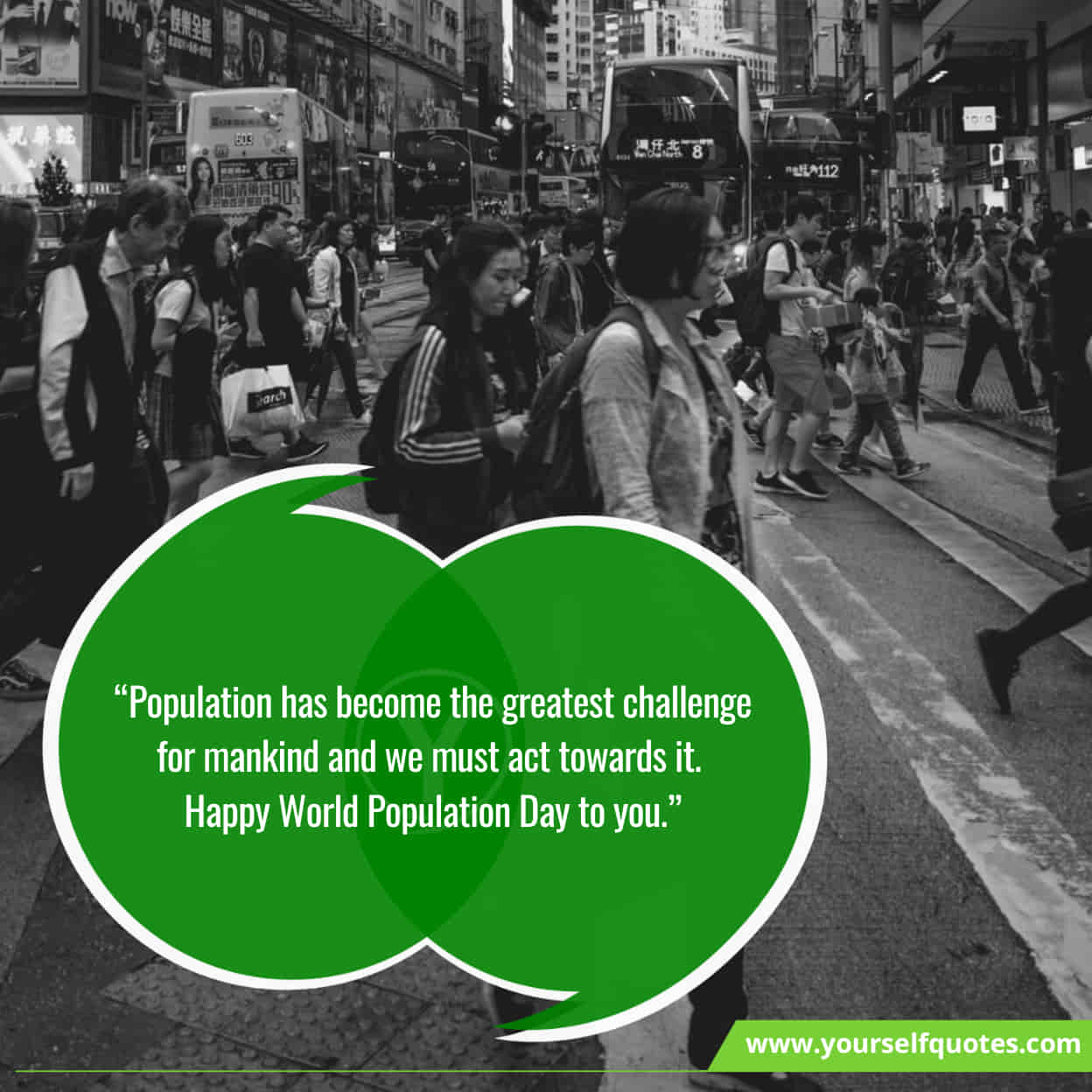 “Excessive (population) growth may reduce output per worker, repress levels of living for the masses and engender strife.”

“The strongest witness is the vast population of the Earth to which we are a burden and she scarcely can provide for our needs.”

“If we are not going to be taking measures on controlling population then there is no point celebrating World Population Day.”

“There are limited resources and limited land but then there is a population that is growing beyond limits. Happy World Population Day to you.”

“The world needs to control the explosion of population or one day it is going to explode. Happy World Population Day.”

“Each and every effort made towards controlling world population must be appreciated. Wishing a very Happy World Population Day.”

“Without controlling the population, we cannot control the world from getting destroyed. Happy World Population Day to you.”

“Overpopulation can cause as many problems as we cannot even imagine. Wishing a very Happy World Population Day to everyone.”

The first thing that we all can do to celebrate world population day is to make sure that we are doing our family planning right. There are many places in the world with unrestrained population growth. That happens due to the lack of enough preventive measures. If you are lucky enough to know about birth control and maternal health, make sure you take advantage of your privileges. If you can help and support those areas that don’t have access to those materials, you can be a part of educating them. Together we can make this world to be a better place for all of us.

Other ways of celebrating world population day are to raise awareness about the issues related to the population. You can use your social media or blog to raise awareness about the population issues. That is one of the best steps we can take to prevent them. There are great infographics and fact sheets available on the Internet, and all you need to do is to share those with your friends, family, and followers.

Which are your favorite World Emoji Day Quotes? Leave a comment below.