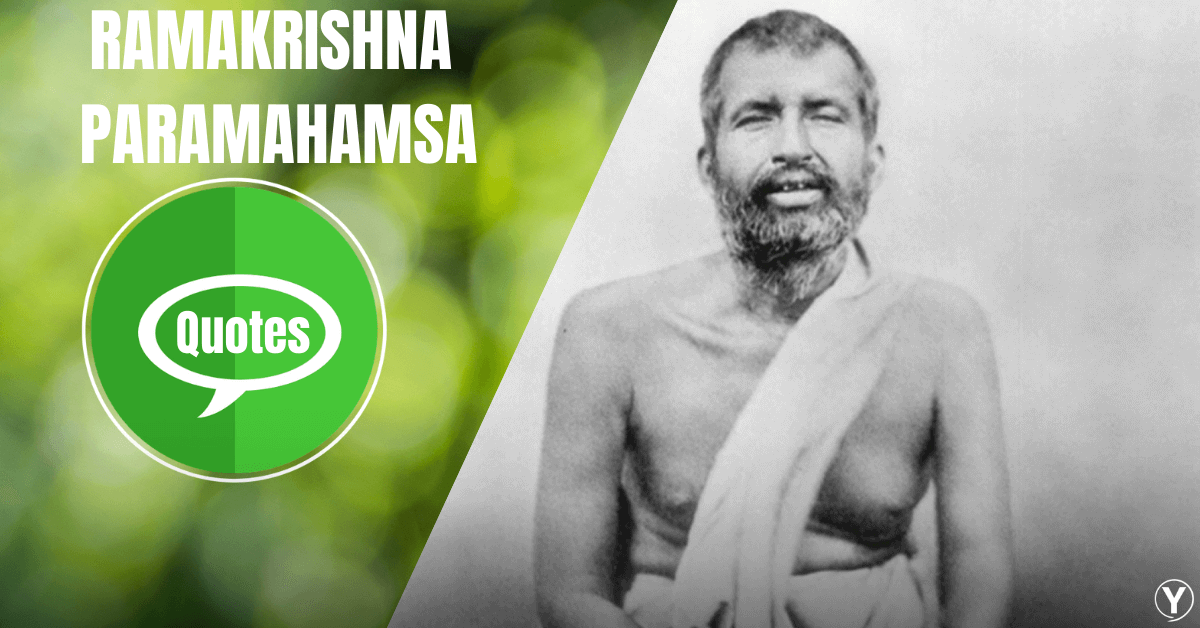 Ramakrishna Paramahamsa born as Ramakrishna “Gadadhar” Chattopadhyay, was a famous Indian Hindu mystic. He was praised by people as a great philosopher and saint. Moreover, he was counted as an avatar by many in the 19th century Bengal.

Paramahamsa belonged to a very poor, pious, and orthodox Brahmin family. His family was highly devoted to the Hindu God Rama. Starting from a very young age, he described his first spiritual ecstasy walking along with the paddy fields a flock of white cranes flying against a backdrop of dark thunder clouds caught his vision. Through this experience, he felt indescribable joy.

The great saint was deeply influenced by several religious traditions, including devotion toward the Goddess Kali, Tantra (Shakta), Vaishnava (Bhakti), and Advaita Vedanta. His starting experience was as a priest at the Dakshineshwar Kali Temple. He earned an abundance of acknowledgment through mystical temperament and ecstasies. And this made him draw to various spiritual teachers, social leaders, lay followers and eventually disciples.

Ramakrishna was married to Sarada Devi in 1859 by the efforts of his family. She became his disciple and he respected her as an incarnation of the Goddess. His followers worshipped Devi as the Holy Mother (“Sri Maa,”) which was Ramakrishna’s description for Goddess Kali.

In Calcutta and various other parts of the country, he was renowned by people. Masses of people gathered to gain the intensity of his religious passion and to learn from him. People use to hear him understand the need for engagement with God and religion. His chief disciple,  Swami Vivekananda, helped in laying the foundation of the Ramakrishna Mission, which was considered as the Ramakrishna’s religious school of thought.

The words spoken by this influential saint are which became golden and wisdom for all to follow. So let’s explore some of the most delightful Ramakrishna Paramahamsa Quotes to learn the philosophy of life.

“As long as I live, so long do I learn.” — Ramakrishna Paramahamsa

“Once a person has faith, he has achieved everything.” — Ramakrishna Paramahamsa

“When the flower blooms, the bees come uninvited.” — Ramakrishna Paramahamsa

“It is the mind that makes one wise or ignorant, bound or emancipated.” — Ramakrishna Paramahamsa

“As you pray to God for devotion, so also pray that you may not find fault with anyone.” — Ramakrishna Paramahamsa

“The sun can give heat and light to the whole world, but he cannot do so when the clouds shut out his rays. Similarly as long as egotism veils the heart, God cannot shine upon it.” — Ramakrishna Paramahamsa

“The supreme purpose and goal for human life… is to cultivate love.” — Ramakrishna Paramahamsa

“Sugar and sand may be mixed together, but the ant rejects the sand and goes off with the sugar grain; so pious men lift the good from the bad.” — Ramakrishna Paramahamsa

“A boat may stay in the water, but water should not stay in the boat. A spiritual aspirant may live in the world, but the world should not live within him.” — Ramakrishna Paramahamsa

“Pray to Him with a yearning heart, and weep. that will purify your heart. you see the reflection of the sun in clear water.” — Ramakrishna Paramahamsa

“The traits of a worldly man endowed with tamas are sleep, lust, anger, egotism, and the like.” — Ramakrishna Paramahamsa

“All sins vanish if one only remembers god. his name breaks the fetters of death. you must dive; otherwise, you can’t get the gem.” — Ramakrishna Paramahamsa

“You should renounce mentally. live the life of a householder in a spirit of detachment.” — Ramakrishna Paramahamsa

“A man achieves neither knowledge nor liberation as long as he has egotism. he comes back again and again to the world.” — Ramakrishna Paramahamsa

“It is easy to talk on religion, but difficult to practice it.” — Ramakrishna Paramahamsa

Ramakrishna Paramahamsa was counted among one of the most spiritual and enlightened mystics from West Bengal, India.

This great guru advocated the path of devotion towards the Bhakti movement. He tried to reach God by different paths, by trying many paths like Islam, Christianity or Hindu paths like Vaishnava bhakti, tantra sadhana (with the help of bhairavi brahmani), worshipping lord Rama or formless meditation (with the help of totapuri).

His teachings and path shown by him are still followed by millions of people across the globe. So let’s share out these spiritual Ramakrishna Paramahamsa Quotes Images with our lovely friends out there.