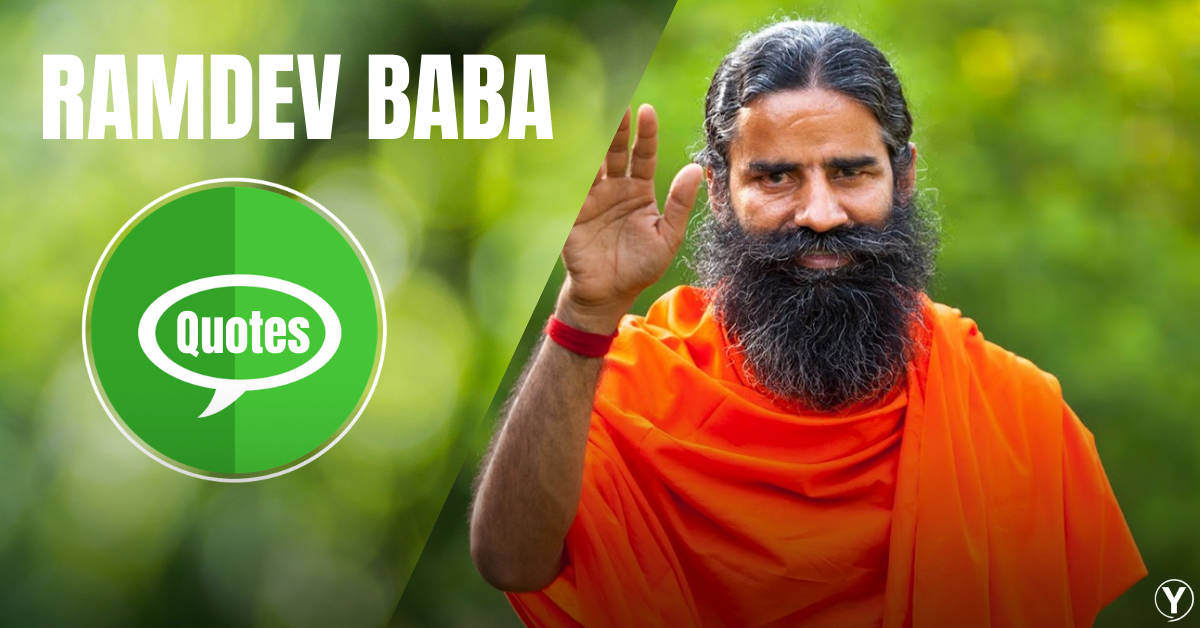 Yoga Guru Swami Ramdev Baba, original name Ram Kisan Yadav, is an Indian Yoga Guru known for his spiritual practice of yoga and Ayurveda. He is the co-founder of Patanjali Ayurveda Ltd. with his colleague Balkrishna.

Baba Ramdev claims that when he was two and a half years old he was paralyzed and subsequently healed by practicing yoga. In various Gurukul schools, he learned Indian literature, Yoga, and Sanskrit. He was Acharya Baldevji’s student in Gurukul Kalwa and studied yoga from Arya Samaji, Guru Karamvir.

Ramdev ‘s largest yoga center is located in Haridwar, a town on the banks of the Ganga River in the foothills of the Himalayas, where Ramdev performs and teaches yoga in an auditorium that is also aired on TV channels in the mornings and evenings.

Ramdev again founded the “Divya Yog Mandir Trust” in 1995. Aastha TV started featuring him in their morning yoga slot in 2003. He proved to be telegenic there and gained a great following. A huge number of people visited his Yoga camps including several celebrities from India and abroad.

In May 2018, Ramdev in partnership with BSNL released Swadeshi Samriddhi SIM cards. He became the face of Patanjali Ayurved, a company he founded with his colleague Balkrishna, over a twenty-year career. Patanjali grew into one of India’s top-grossing FMCG’s.

Baba Ramdev is currently being featured on TV New Channels these days, where he is profoundly teaching and giving his views regarding how to prevent ourselves from this deadly virus Corona. And millions of people across the globe are regularly following his practices and Ayurveda treatment from their homes itself.

“Negative thoughts are the cause of mental illness.” — Swami Ramdev 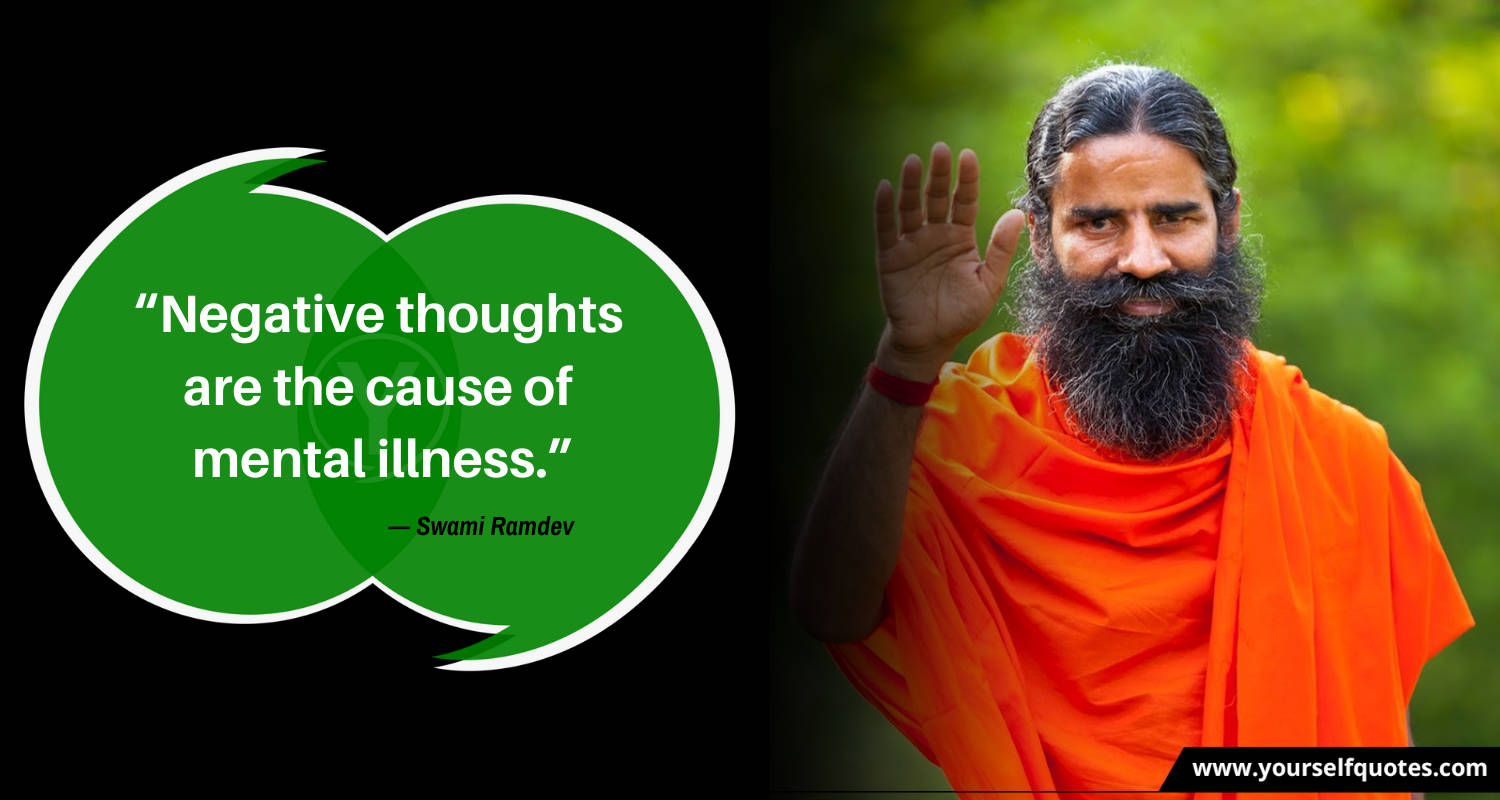 “Work is my religion work is my praying work is the truth of world and life.” — Swami Ramdev 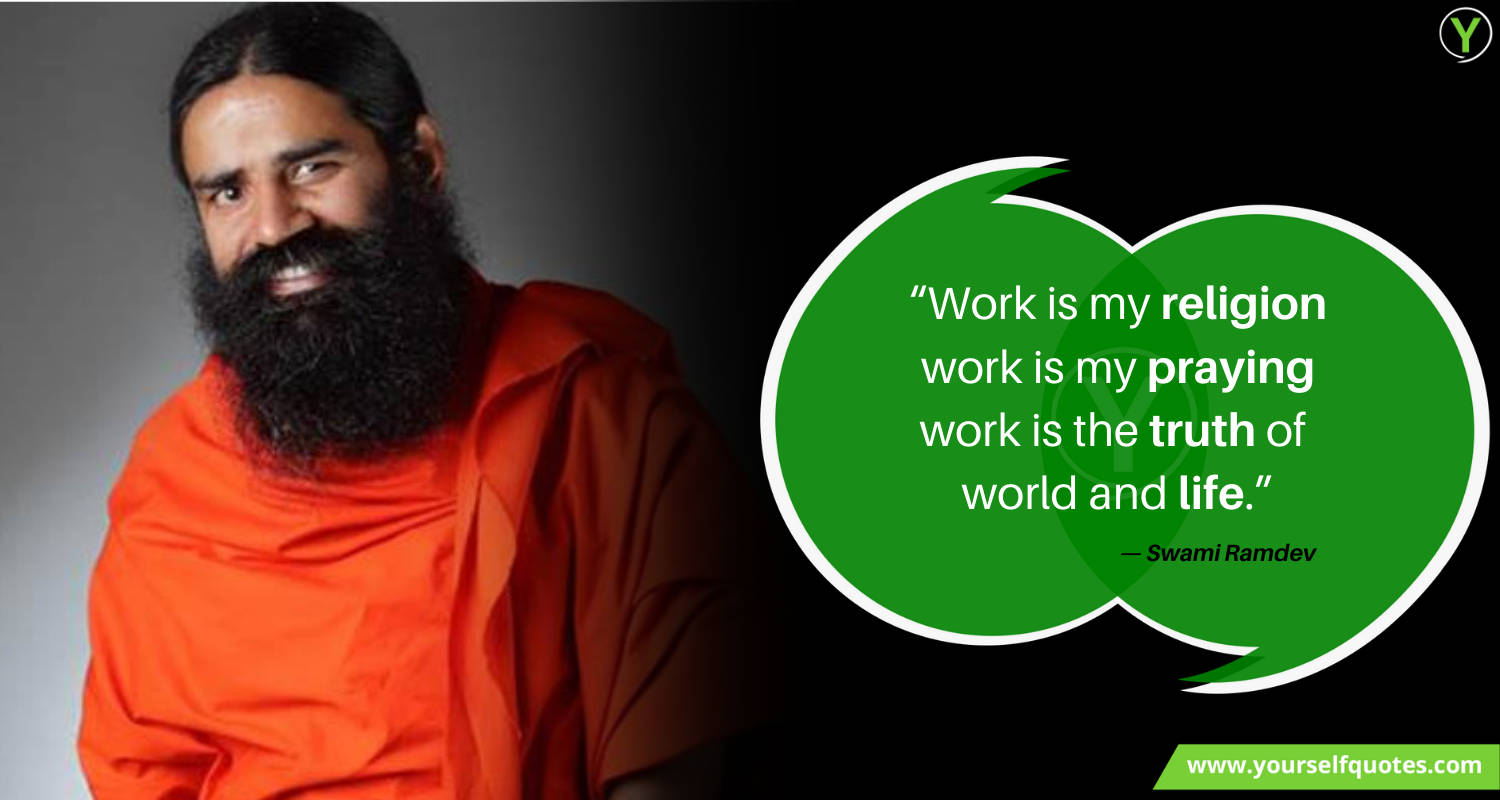 “The Purity and control over thoughts and beliefs is the bridge to success.” — Swami Ramdev 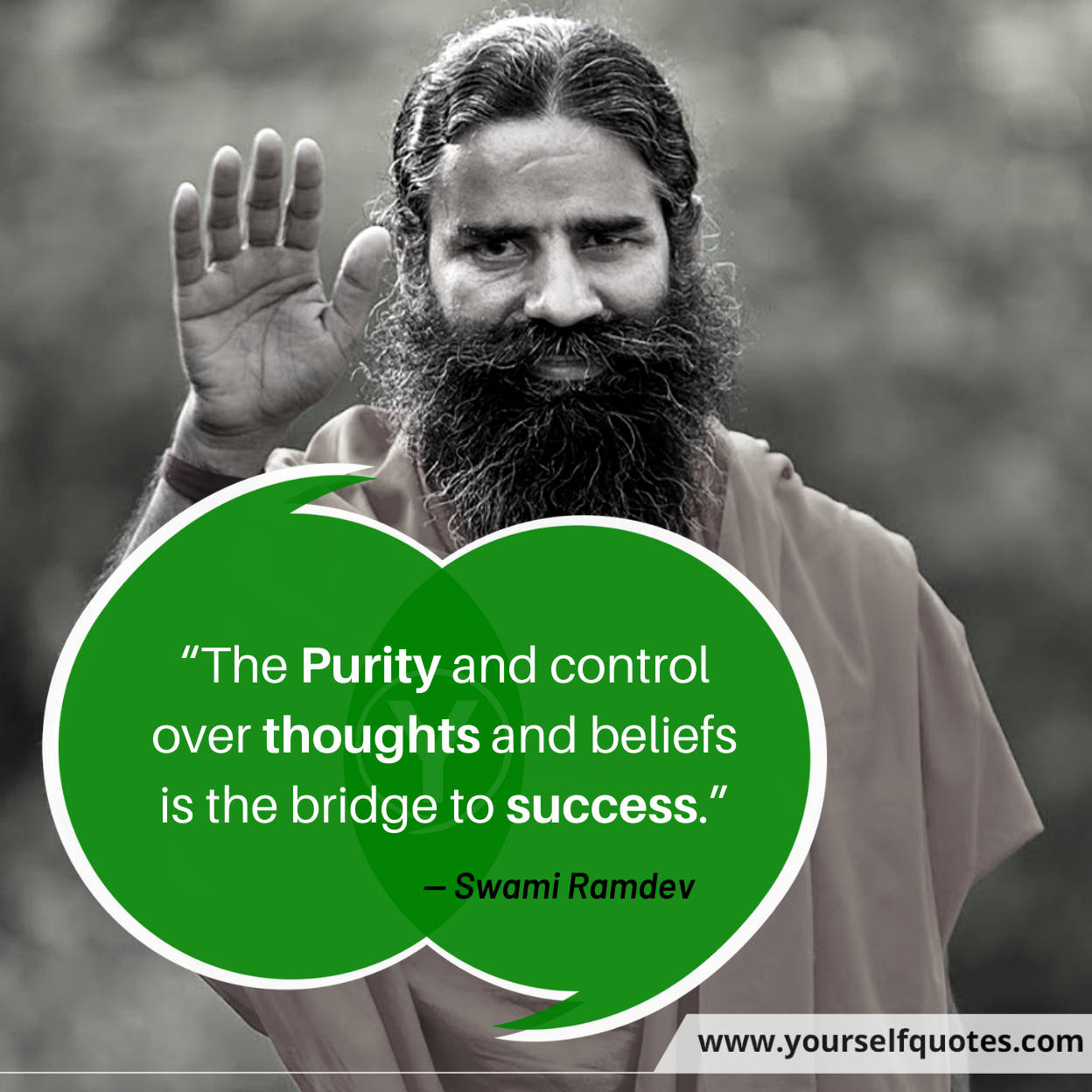 “A Country can only be healthy if its people are healthy.” — Swami Ramdev 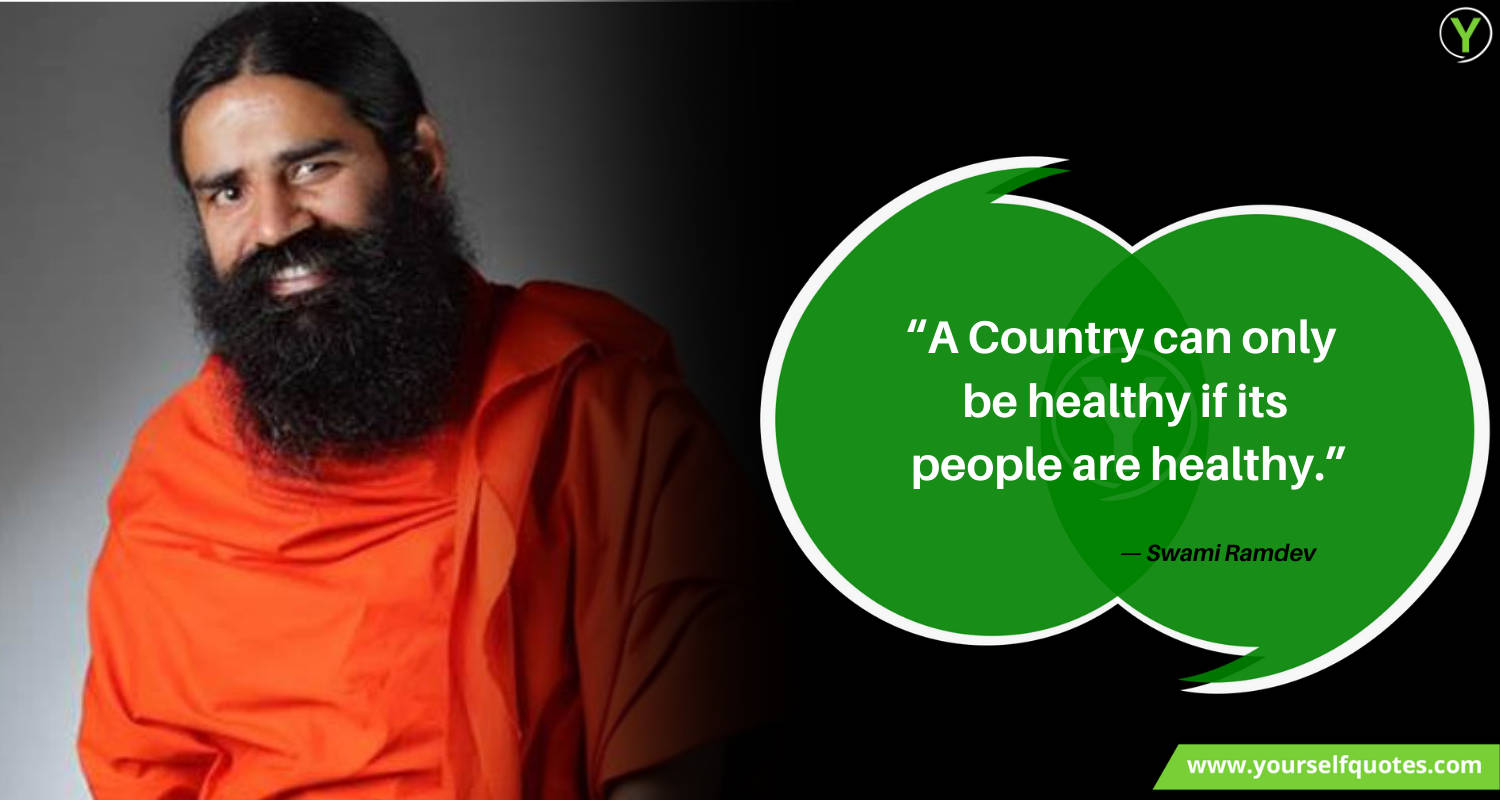 “The youth should come forward, be healthy, and lead the country.” — Swami Ramdev 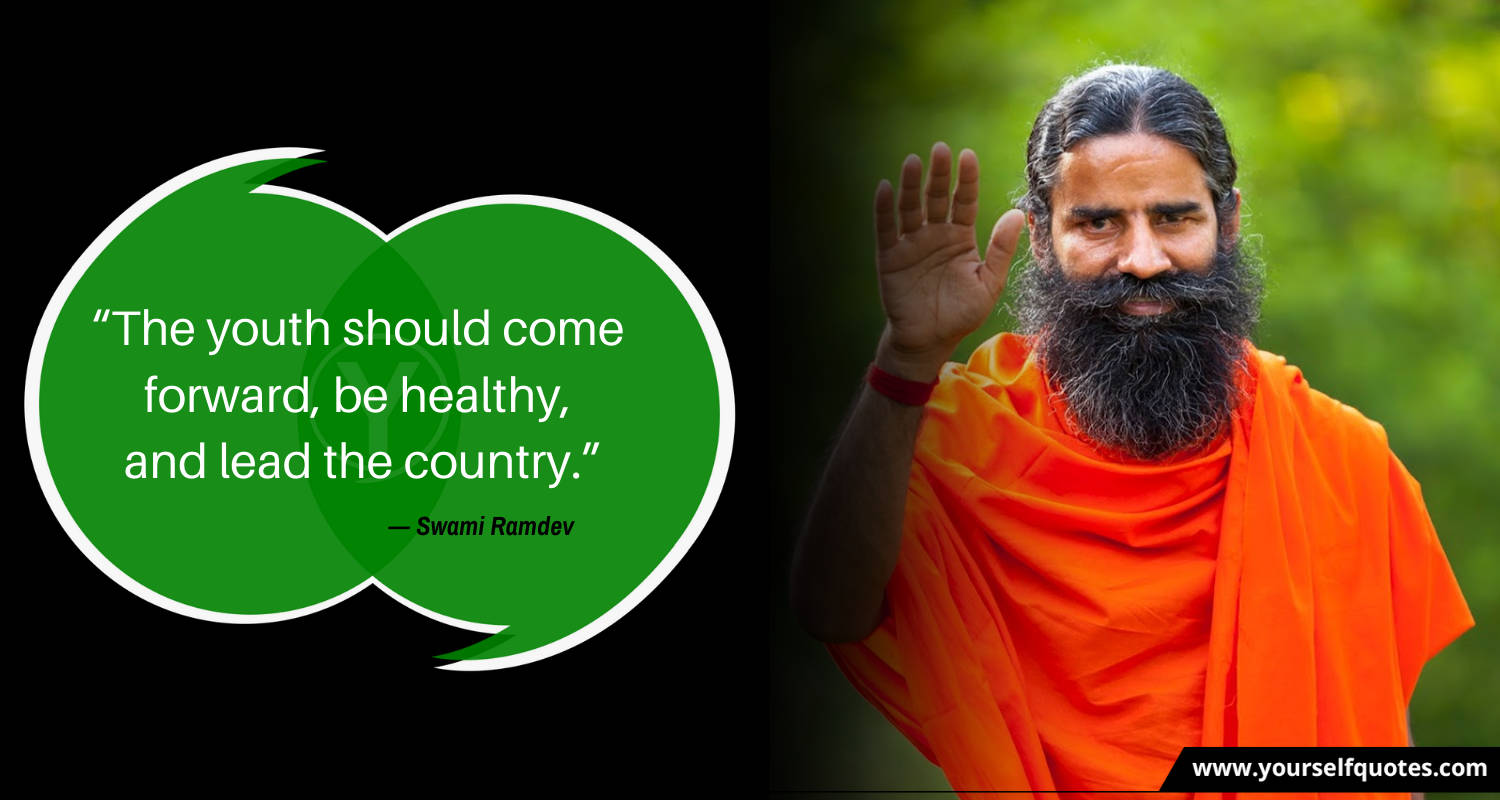 “My every bad or good action affects my whole country.” — Swami Ramdev 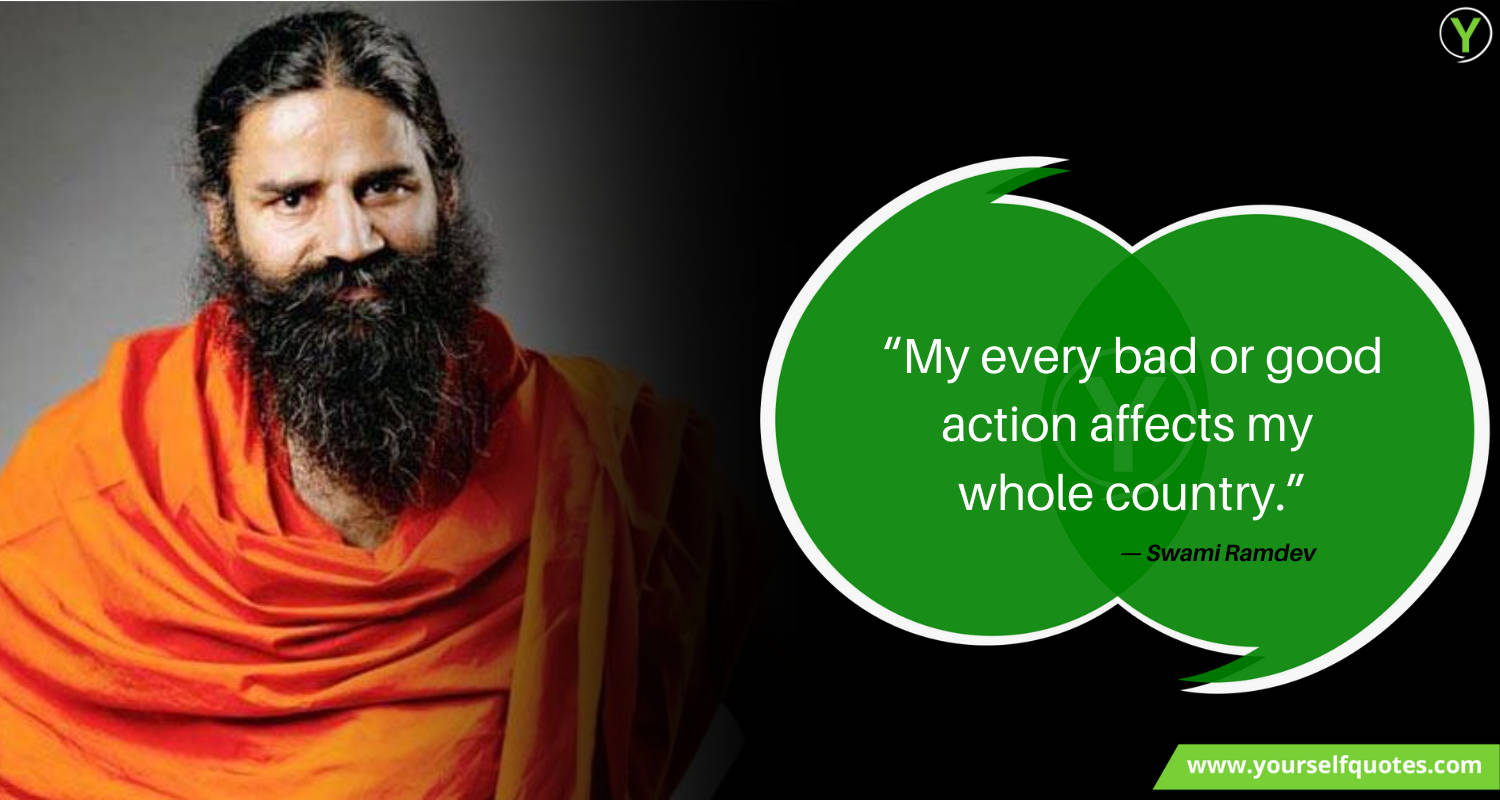 “Every Morning is a New birth and my one day is equal to one lifespan. Today I will accomplish that God has sent me to do this on Earth.” — Swami Ramdev

“If you can control the rising of the mind into ripples, you will experience Yoga.” — Swami Ramdev 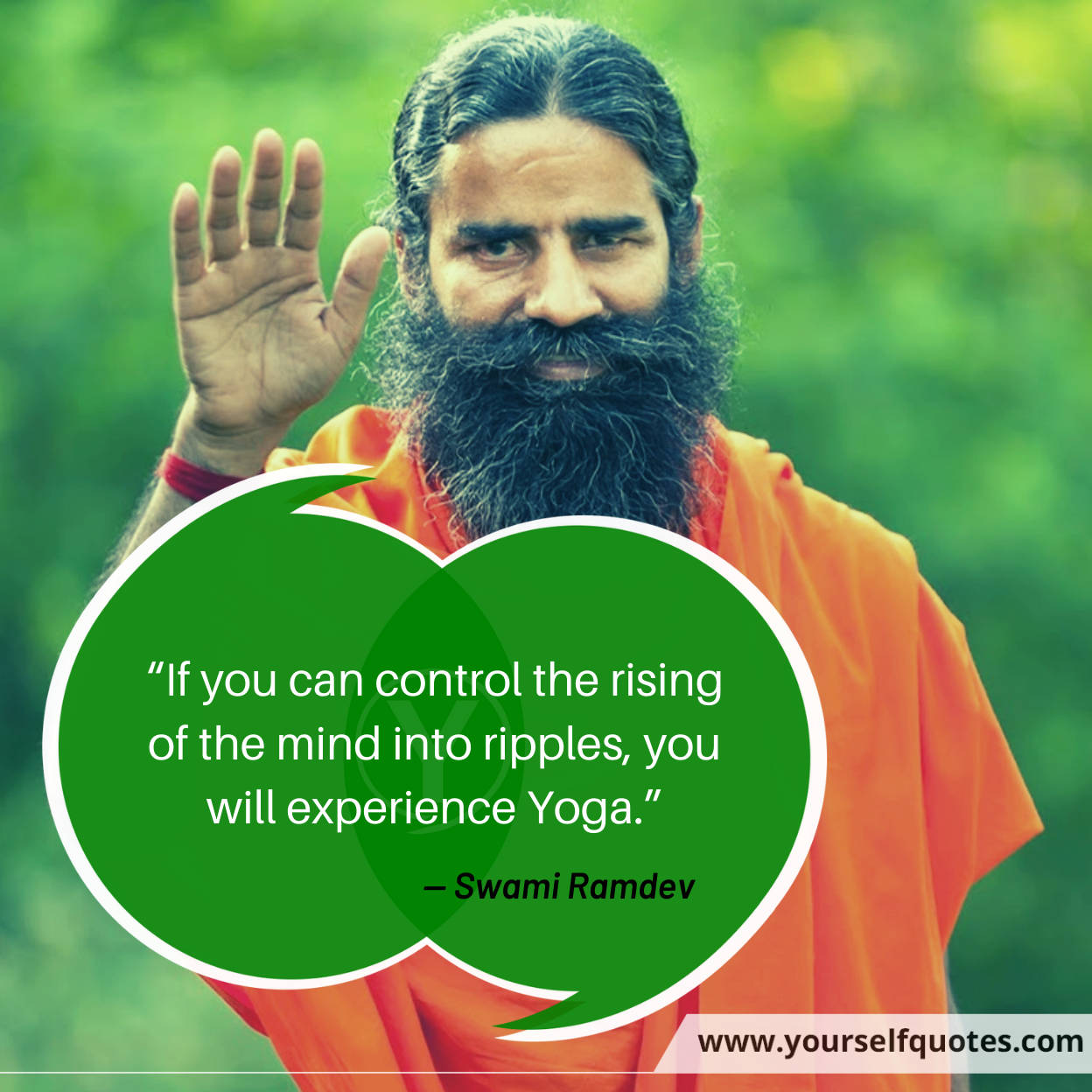 “There is always a light within us that is free from all sorrow and grief, no matter how much we may be experiencing suffering.”— Swami Ramdev

“Yoga takes you into the present moment, the only place where life exists.” — Swami Ramdev 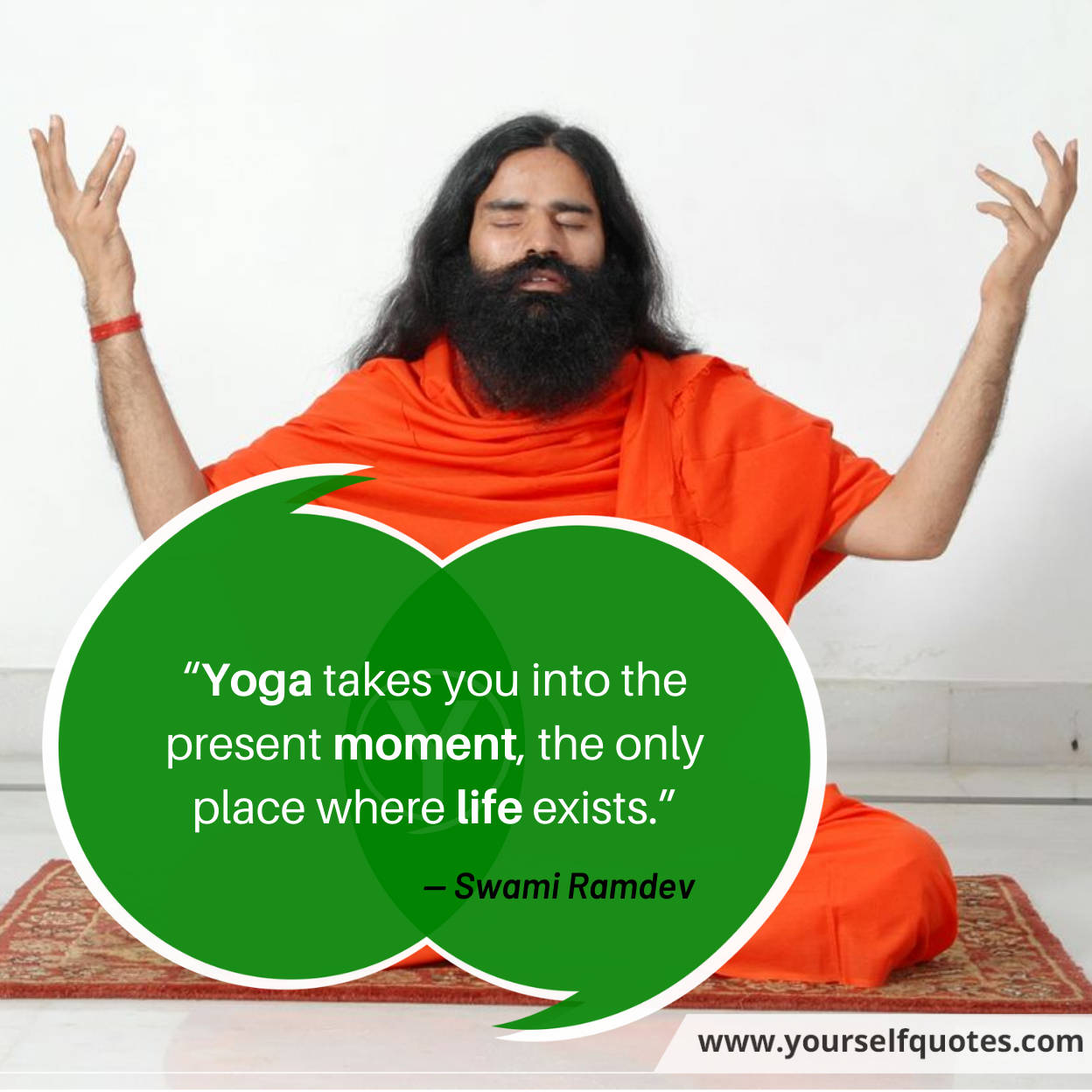 “A devotee should always be involved in good deeds because Lord punishes the wicked and protects those with pure hearts.” — Swami Ramdev 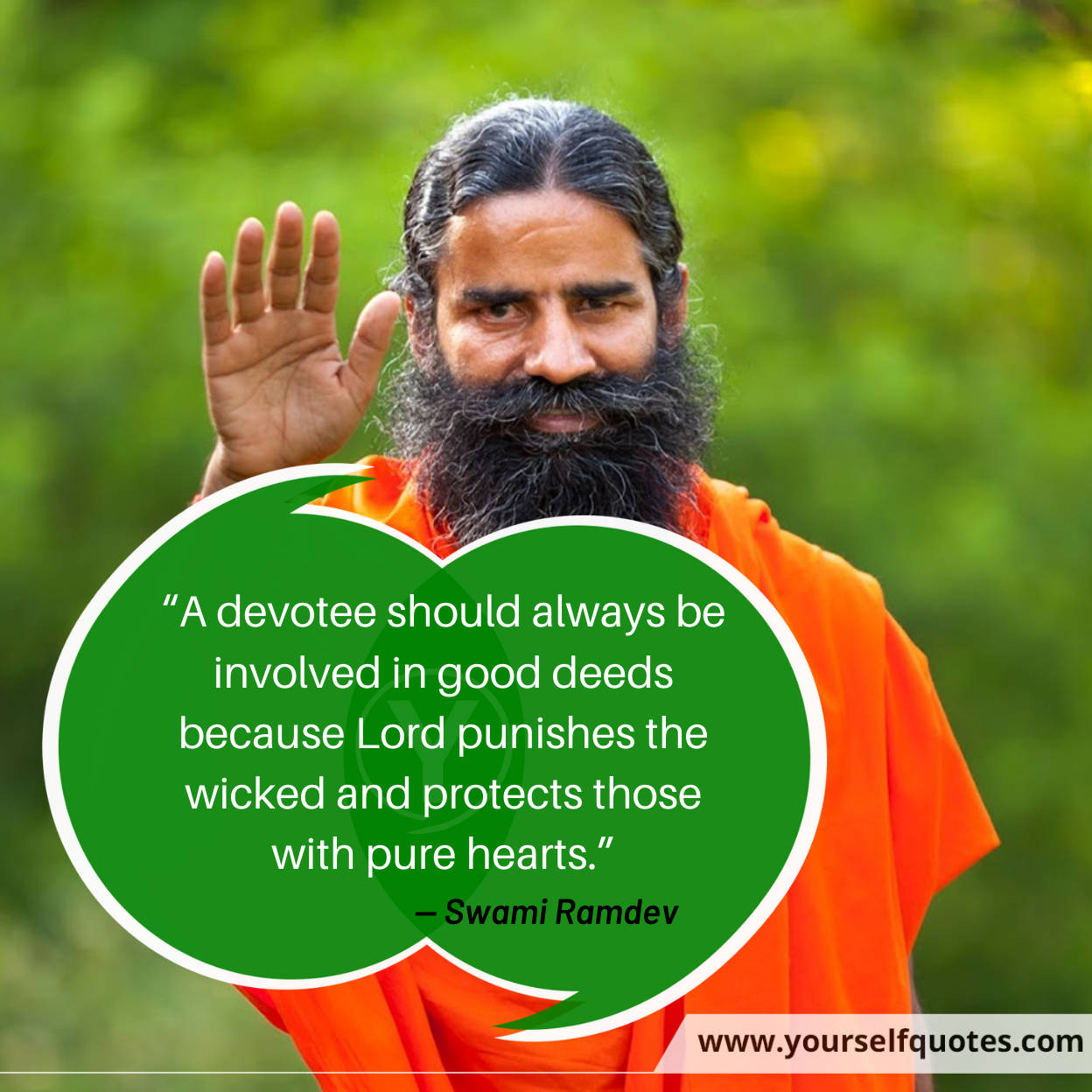 “To Live a good, Healthy and long Life, Keep A Fast For At least One Day in Every Week. it Cleans the Intestines and Unwanted Liquid wastes inside the body.” — Swami Ramdev

“One must never sleep after having lunch it increases fitness.”— Swami Ramdev 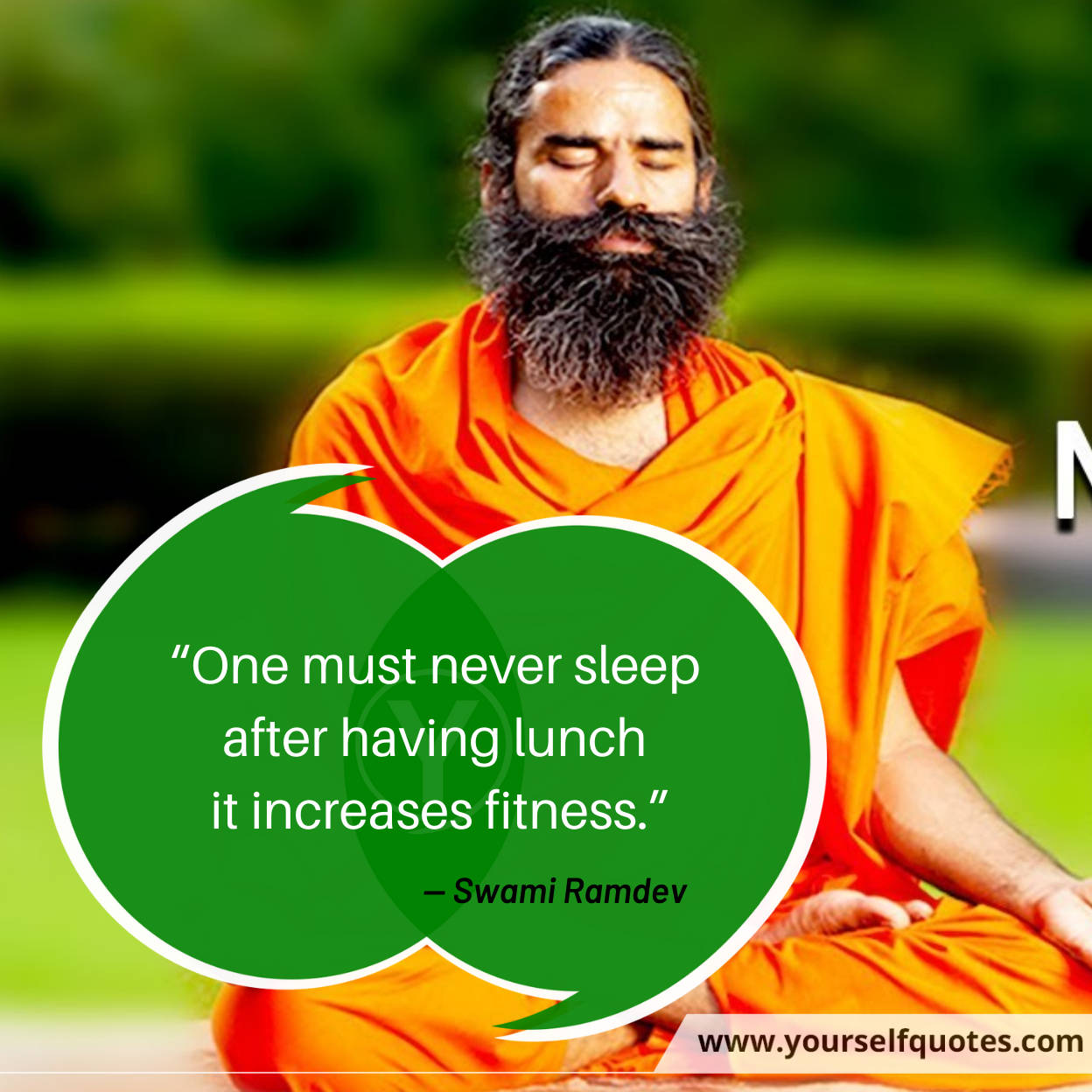 “A man attains spiritual knowledge and ultimate happiness, when he maintains balance with nature.” — Swami Ramdev 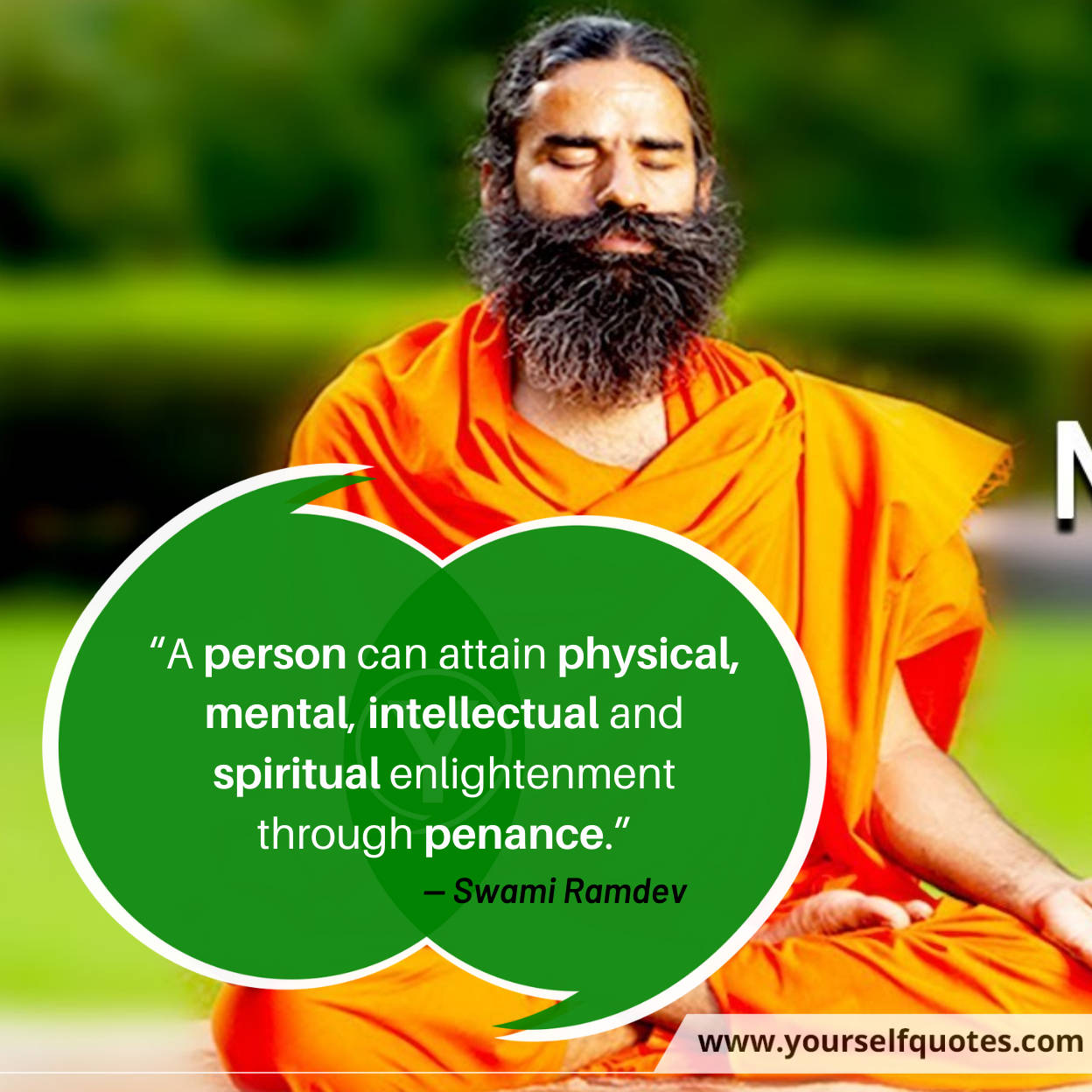 “If you think it is justifiable to take revenge, remember that it is DIVINITY to FORGIVE.” — Swami Ramdev 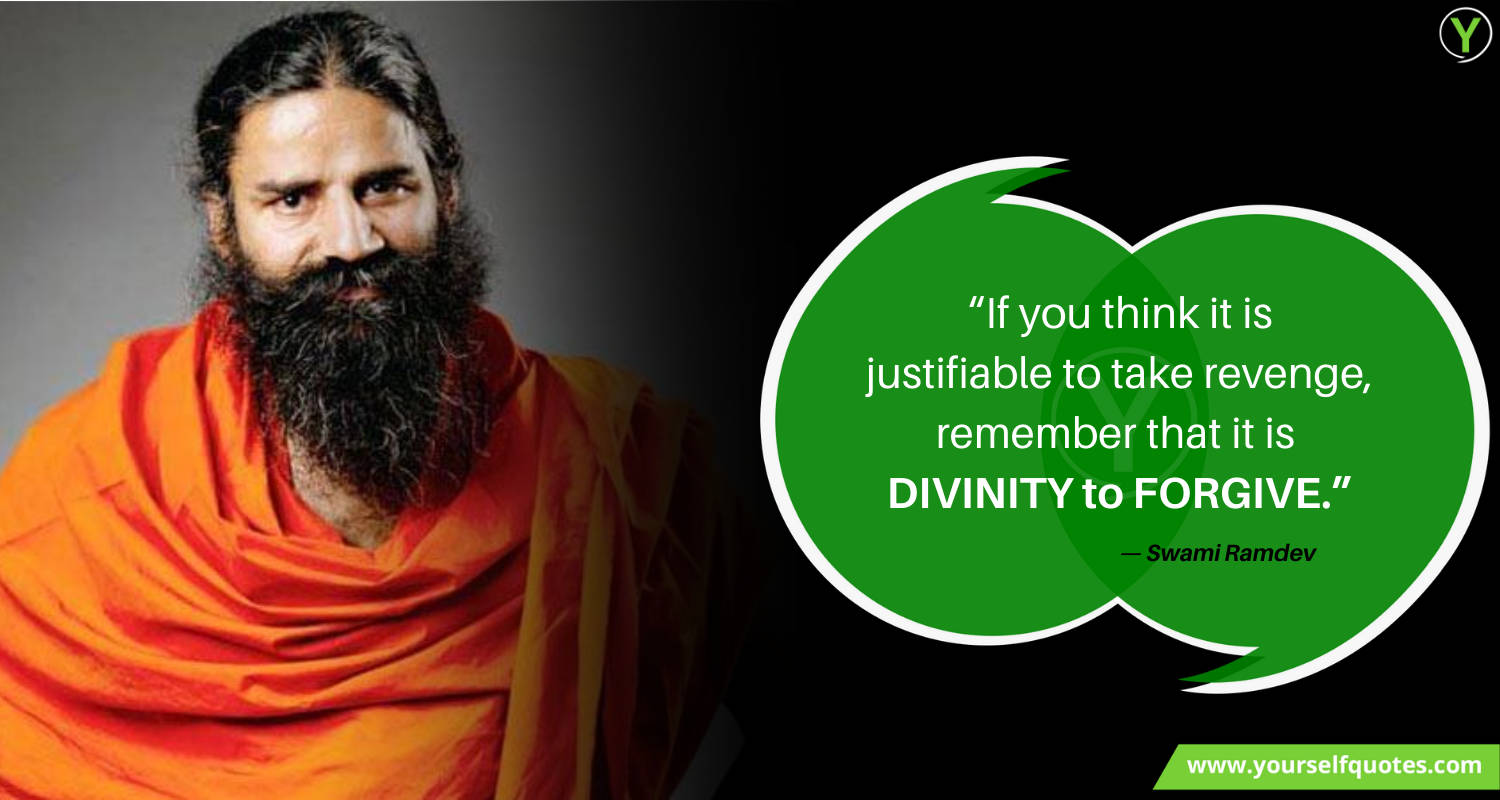 “God has made to accomplish something great. don’t run! don’t hide! People Who run are cowards and weak.” — Swami Ramdev 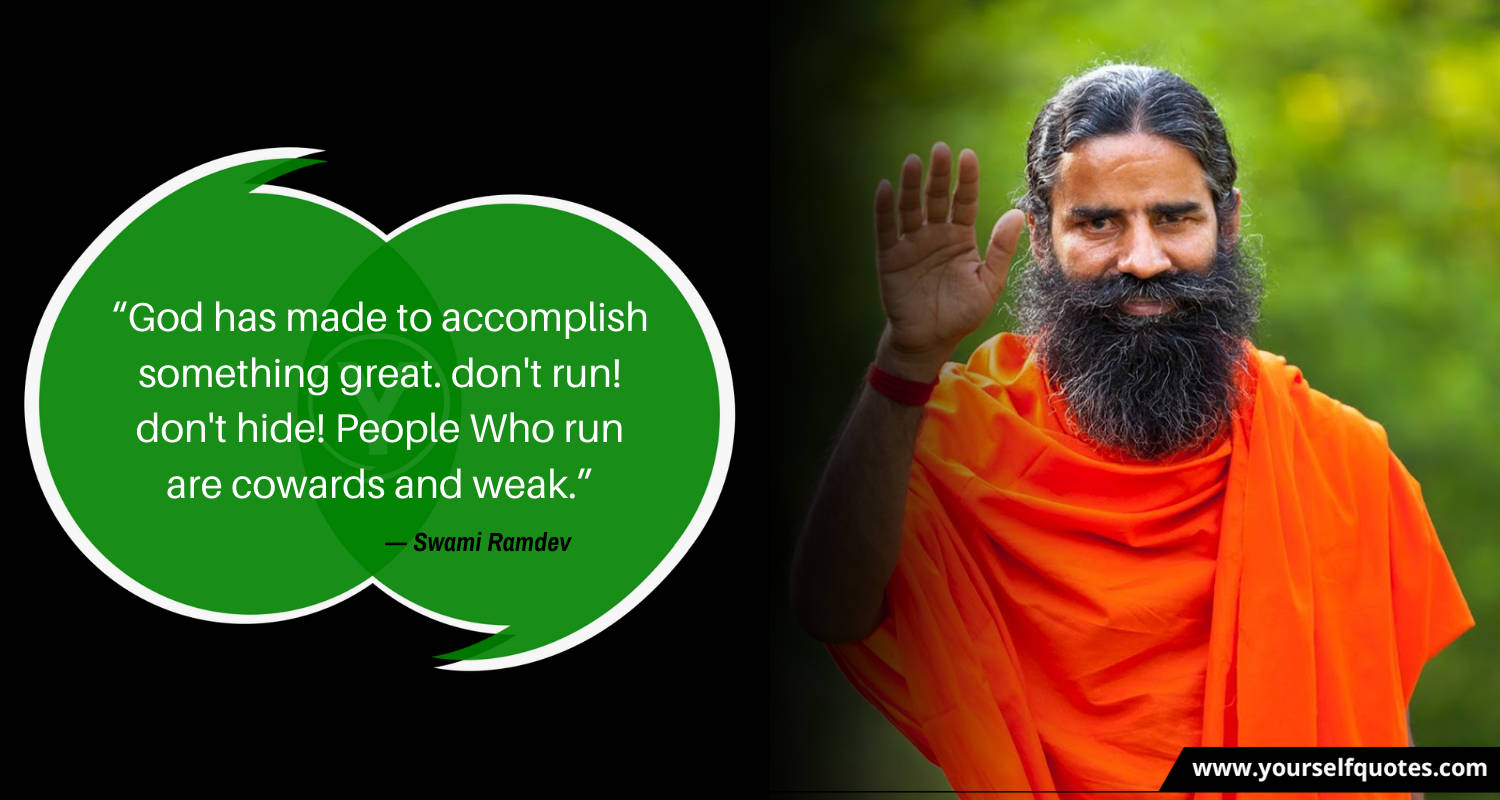 “The Purity and Control Over the Thoughts and Beliefs is the bridge to success.” — Swami Ramdev 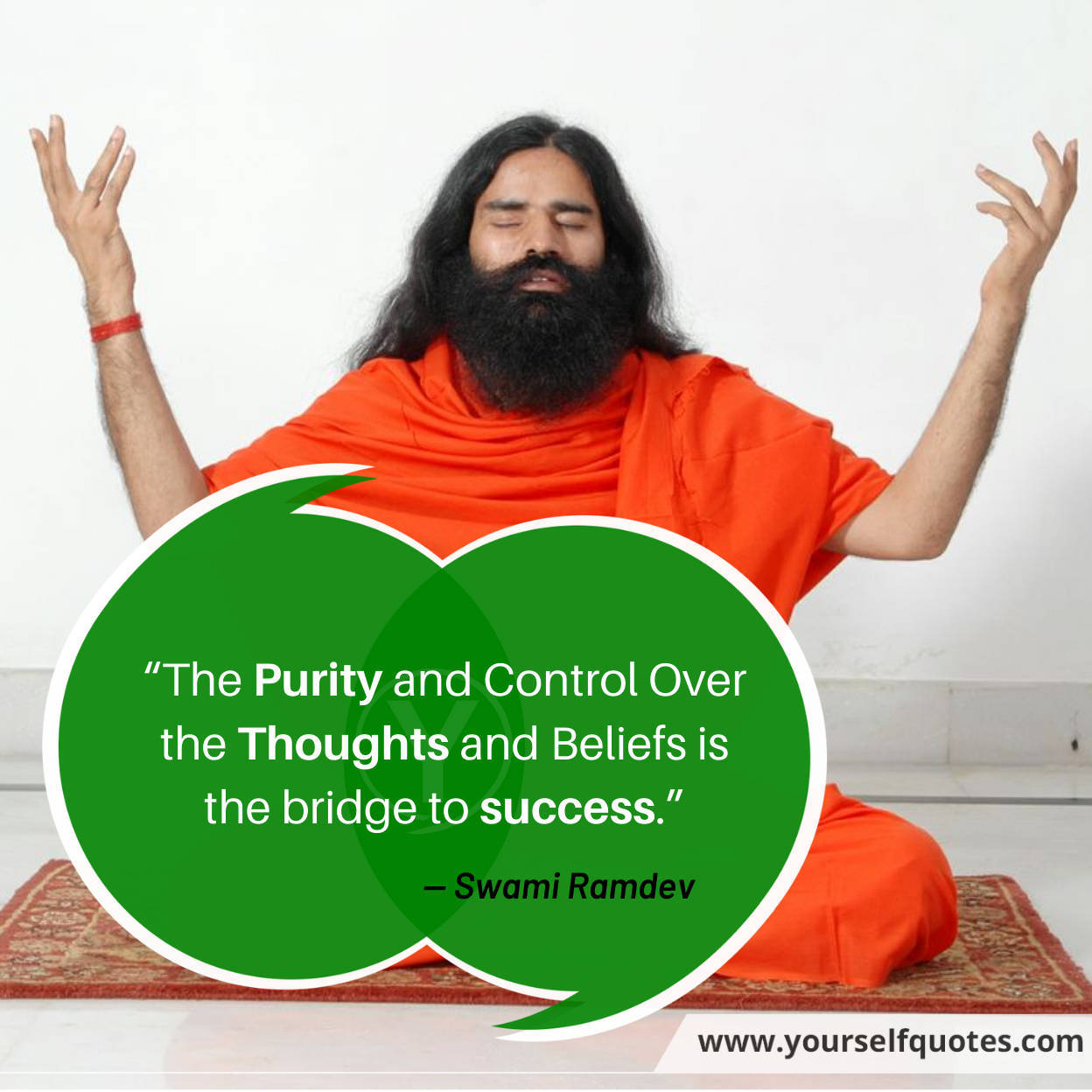 Yoga Guru Swami Ramdev Baba, is a yoga guru known for his Ayurveda practice, business, politics, and farming. He created the Institutions Group of Patanjali and showed interest in political issues.

In the year 2006 Baba Ramdev set up a huge yoga empire in Haridwar under the name of Patanjali Yogpeeth. Since then, it has become one of the country’s main centers of yoga and ayurvedic medicine research. Comments by Baba Ramdev are very motivational. Patanjali Yogpeeth has an overseas establishment on a Scottish island, donated by a family of Indian origin currently residing in Scotland.

Baba Ramdev has published many books primarily on yoga and Ayurveda. The books contain some of Baba Ramdev Quotes. He claims to have no personal political ambitions but also stresses that taking a stand against various social ambiguities is important.

We wish health and success to all through reading these optimistic healthy Yoga Guru Swami Ramdev Baba Quotes Images. And hope you will spread the healthy word with all.

Michelle Obama Quotes That Will Inspire Live Your Best Life

Inspirational Quotes That Will Make You Influential In Life

This website uses cookies to improve your experience while you navigate through the website. Out of these cookies, the cookies that are categorized as necessary are stored on your browser as they are essential for the working of basic functionalities of the website. We also use third-party cookies that help us analyze and understand how you use this website. These cookies will be stored in your browser only with your consent. You also have the option to opt-out of these cookies. But opting out of some of these cookies may have an effect on your browsing experience.
Necessary Always Enabled
Necessary cookies are absolutely essential for the website to function properly. This category only includes cookies that ensures basic functionalities and security features of the website. These cookies do not store any personal information.
Non-necessary
Any cookies that may not be particularly necessary for the website to function and is used specifically to collect user personal data via analytics, ads, other embedded contents are termed as non-necessary cookies. It is mandatory to procure user consent prior to running these cookies on your website.
SAVE & ACCEPT
5 Shares
Copy link
CopyCopied
Powered by Social Snap