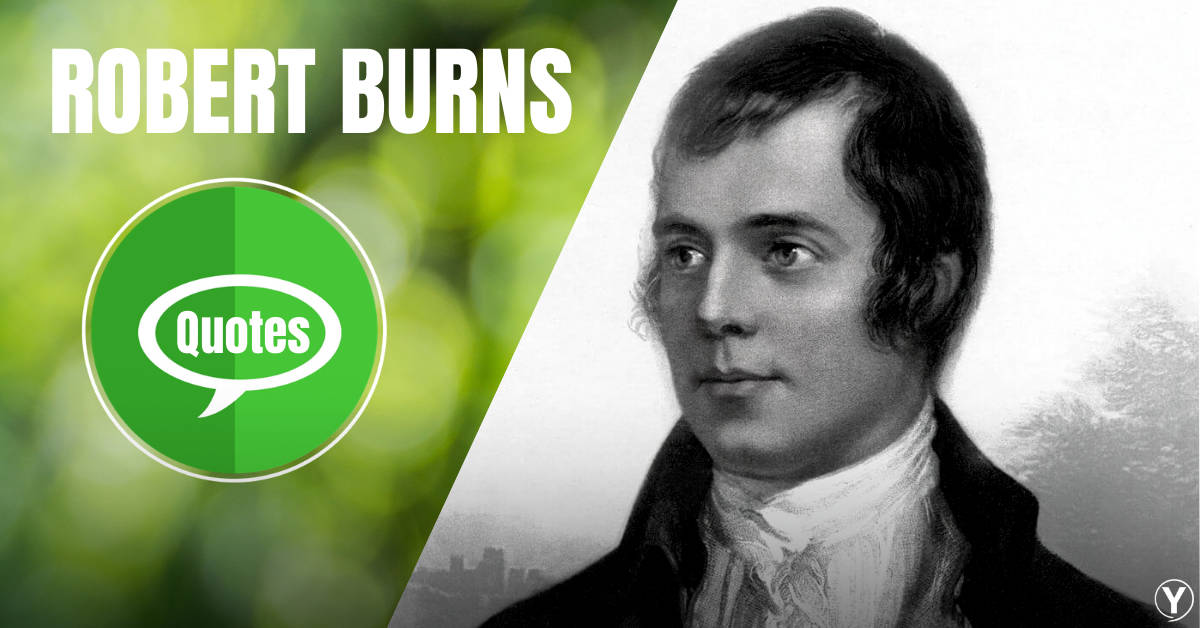 Robert Burns was profoundly known as Rabbie Burns, the National Bard, Bard of Ayrshire, and the Ploughman Author. He was a Scottish poet and lyricist and was popular by many other names and epithets. He is usually recognized as Scotland’s national poet and is honored all over the world.

Robert was born on 25 January 1759, in Alloway, United Kingdom. Robert was born to William Burns, a self-educated tenant farmer, and Agnes Burns. He was the eldest of seven siblings.

He had no formal schooling and got much of his education from his father, who taught reading, writing, arithmetic, geography, and history to his brothers, and also wrote A Manual of Christian Faith for them. He was also taught by John Murdoch, who in 1763 opened an “adventure academy” in Alloway, and taught both Robert and his brother Latin, French, and mathematics.

His understanding of Scottish literature in his youth was limited to orally transmitted traditional songs and fairy tales along with a revival of the late 15th-century poem “Wallace.” His philosophy appears to have remained secular deism in his adult life.

He had a relationship at the farm with a servant girl, Elizabeth Paton, who had his first child in 1785, and greeted her with a lively poem on the birth of the boy.

In 1784 and 1785 Burns evolved rapidly as an “occasional” poet who gradually turned to verse to express his feelings of passion, affection, or laughter, or his satirical observation of the social environment. Burns was a conscientious craftsman; his writings in the commonplace book he published in 1783 show that he has been interested in the technological problems of versification from the outset.

Burns wrote all his songs to known melodies, often in an attempt to find the most appropriate poem for a particular melody, composing many sets of words to the same music. Several songs that, it’s obvious from a range of facts, must have been written considerably by Burns he never believed to be his.

His notable work includes Poems chiefly in the Scottish dialect, a select collection of Original Scottish Airs for the voice, “The Scots Musical Museum”, “Tam o’ Shanter”, “The death and dying words of Poor Maillie”, and many more.

The golden words of romance from this great personality made by introduced to the world as “Pioneer of Romance”. So let’s explore some of the choicest Robert Burns Quotes to experience his romantic poetry.

“Now’s The Day And Now’s The Hour.” — Robert Burns 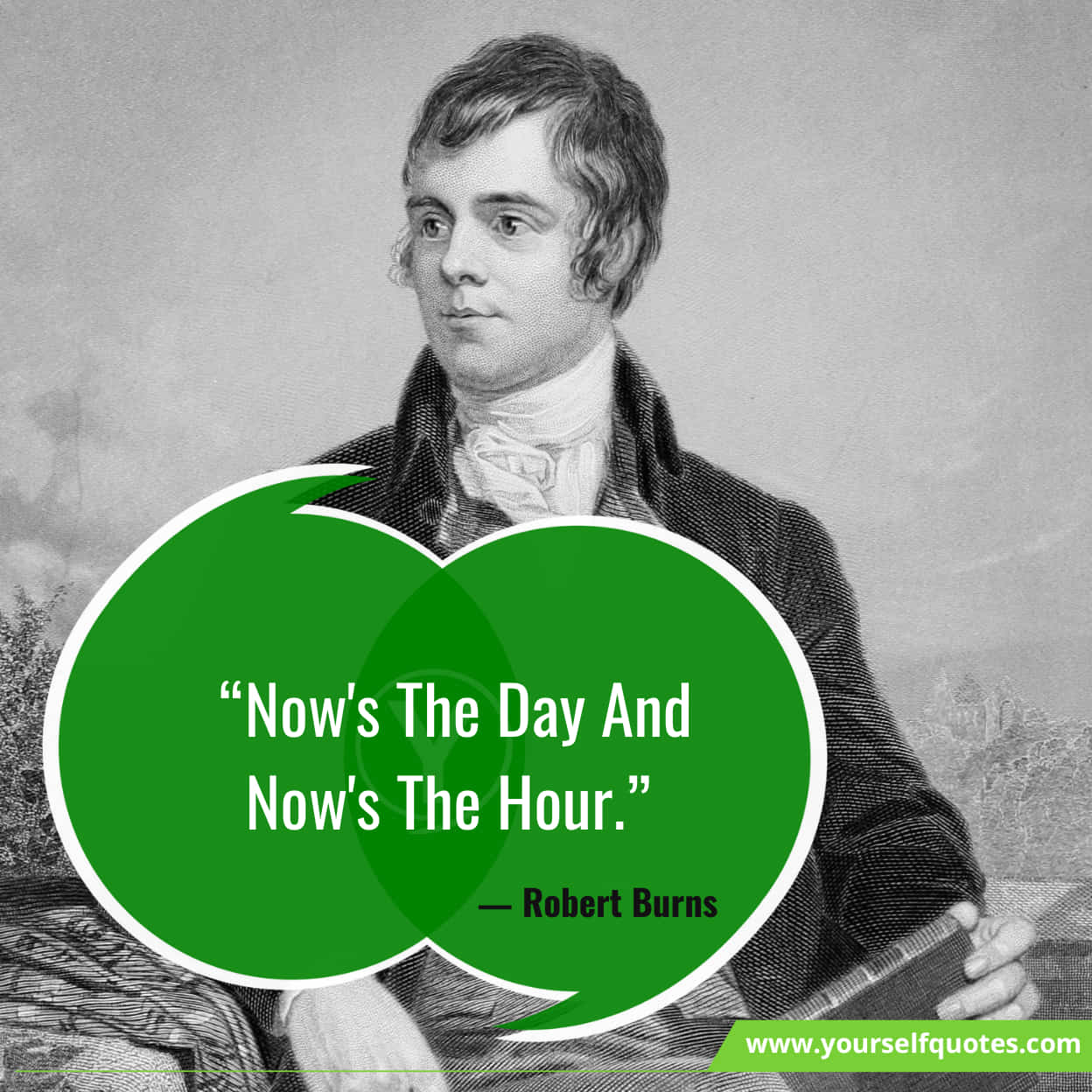 “A woman can make an average man great, and a great man average.” — Robert Burns

“Learn taciturnity and let that be your motto!” — Robert Burns

“How wretched is the person who hangs on by the favors of the powerful.” — Robert Burns

“The heart that is generous and kind most resembles God.” — Robert Burns

“Firmness in enduring and exertion is a character I always wish to possess. I have always despised the whining yelp of complaint and cowardly resolve.” — Robert Burns

“Affliction’s sons are brothers in distress; A brother to relieve, how exquisite the bliss!” — Robert Burns

“Ah, gentle dames! it gars we greet, To think how many counsels sweet, How many lengthened, sage advice, The husband frae the wife despises.” — Robert Burns

“And there begins a Lang digression about the lords o’ the creation.” — Robert Burns

“Dare to be honest and fear no labor.” — Robert Burns 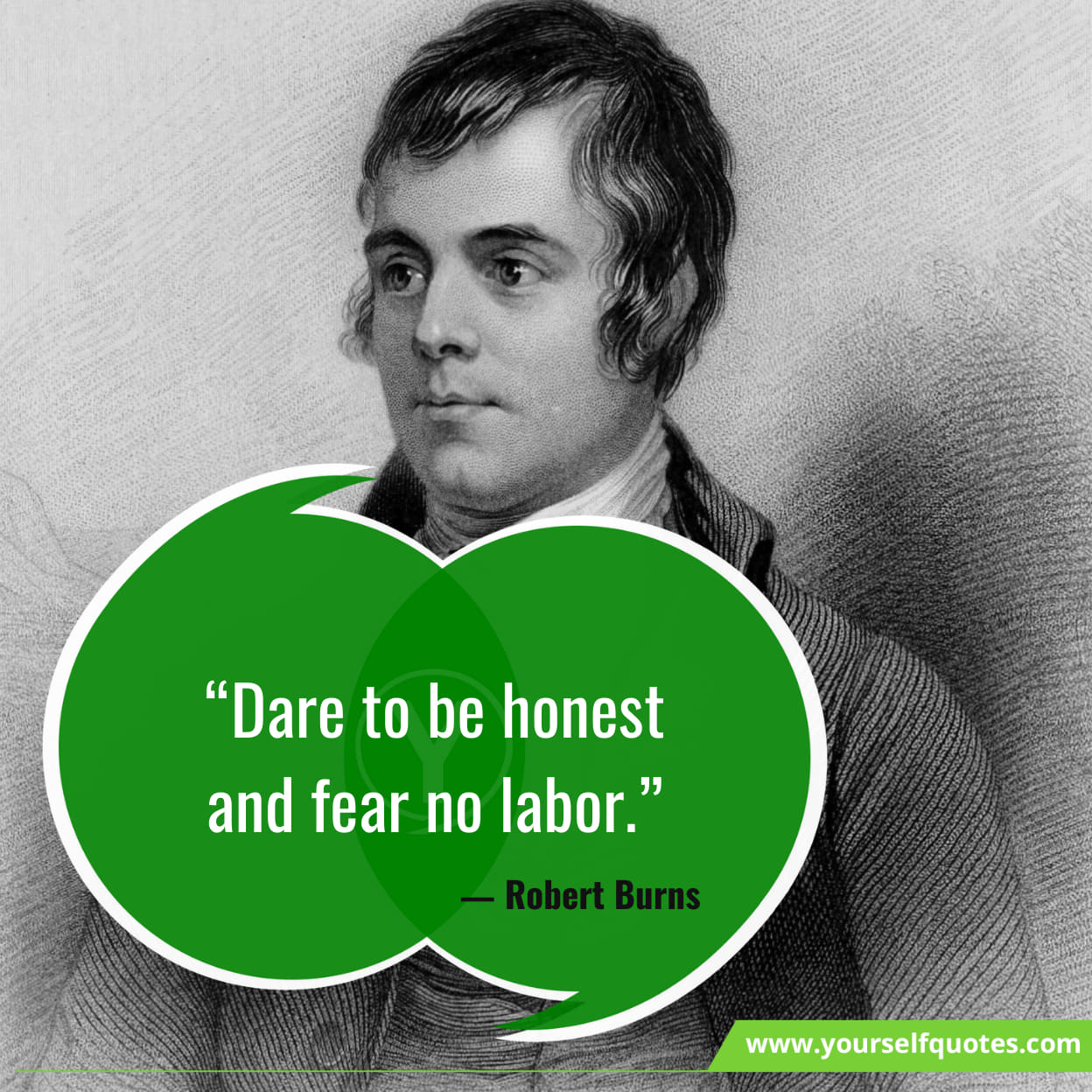 “The best-laid schemes o’ mice and men Gang aft a-gley; And leave us naught but grief and pain For promised joy.” — Robert Burns

“The golden hours on angel wings Flew o’er me and my Dearie; For dear to me as light and life Was my sweet Highland Mary.” — Robert Burns

“Your lines, I maintain it, are poetry, and good poetry… Friendship… had I been so blest as to have met with you in time, might have led me God of love only knows where.”

“The snowdrop and primrose our woodlands adorn, and violets bathe in the wet o’ the morn.” — Robert Burns

“But to see her was to love her, Love but her, and love forever.” ― Robert Burns

“There is no such uncertainty as a sure thing.” ― Robert Burns

“Some books are lies frae end to end, And some great lies were never penn’d…” ― Robert Burns 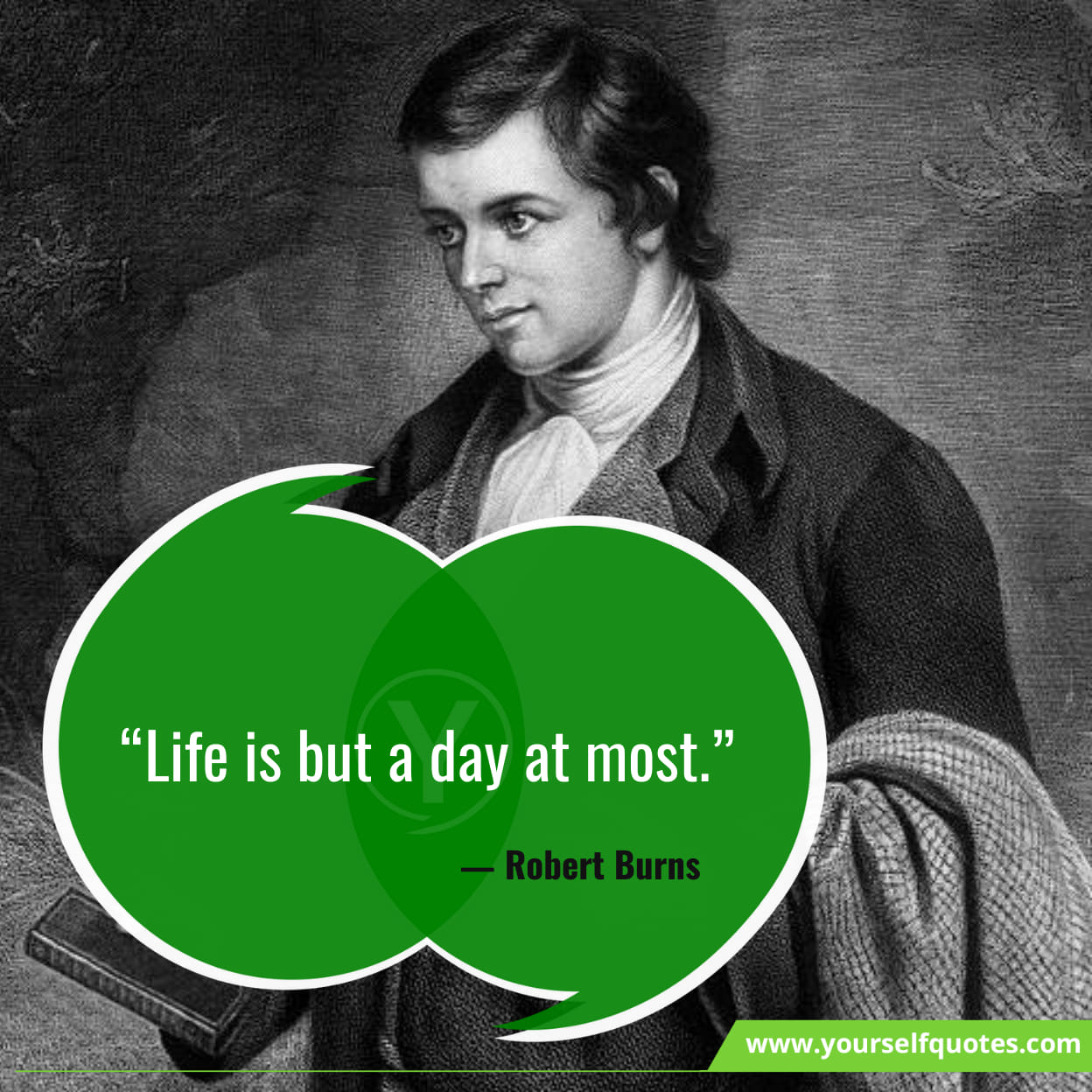 “Oh would some power the giftie gie us, To see ourselves as others see us.” ― Robert Burns

“Wee, sleek it, cowrie, Tim’Ross beastie, O what a panic’s in thy breastie! ” ― Robert Burns

“Nursing her wrath to keep it warm.” ― Robert Burns

“Oh the gift that God could give us, to see ourselves as others see us.” ― Robert Burns

“Dare to be honest and fear no labour.” ― Robert Burns

“If there’s another world, he lives in bliss; if there is none, he made the best of this.” ― Robert Burns

“Painters and poets have the liberty to lie.” ― Robert Burns

“I will love thee still, my dear, while the sands o’ life shall run.” ― Robert Burns

“But to see her was to love her, Love but her, and love forever.” ― Robert Burns 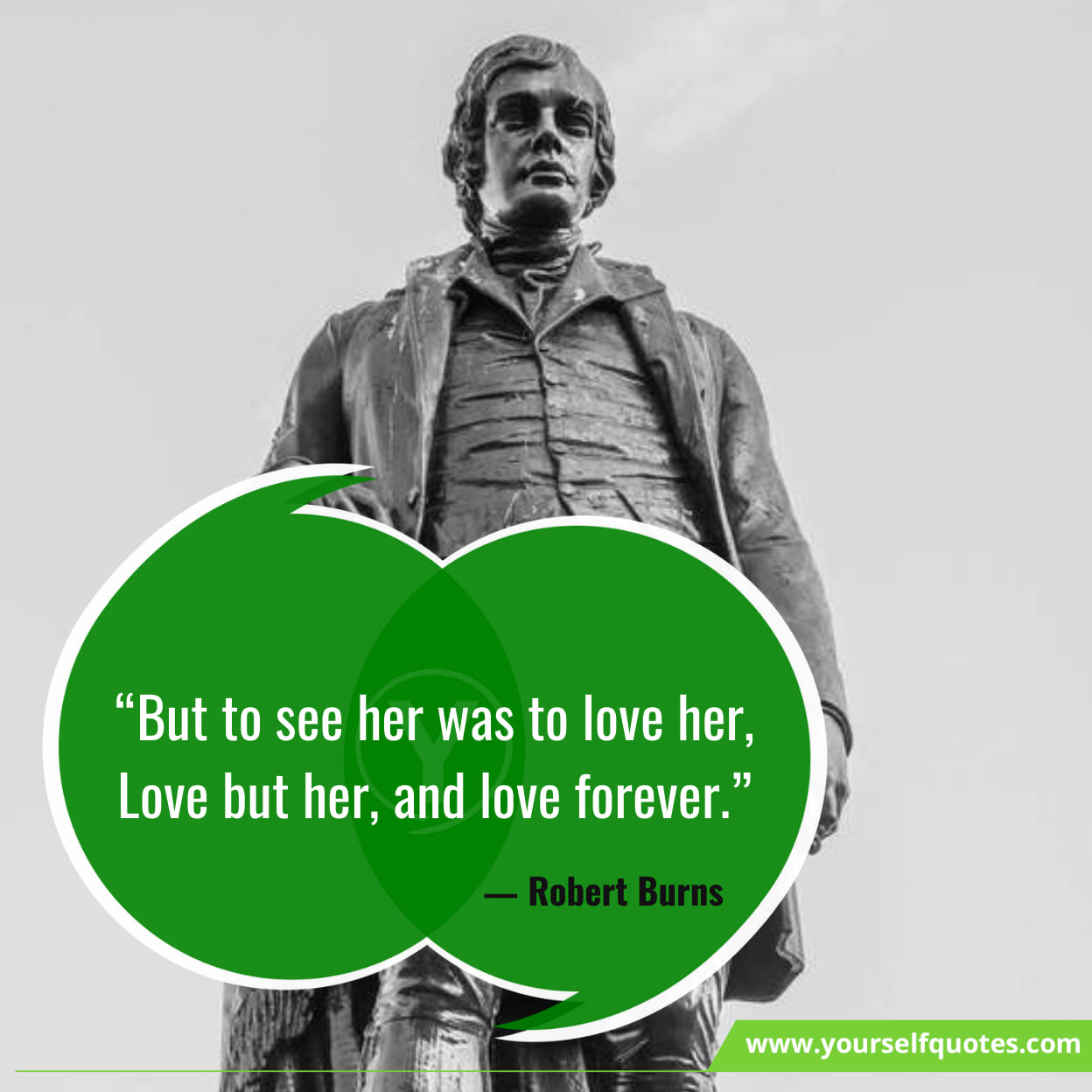 “Fain would I hide, what I fear to discover, Yet long, long too well have I known, All that has caused this wreck in my bosom, Is Jenny, fair Jenny alone.” ― Robert Burns

“Suspicion is a heavy armor and with its weight it impedes more than it protects.” ― Robert Burns

“In simmer, when the hay was mawn, And corn wav’d green in ilka field, While claver blooms white o’er the lea, And roses blaw in ilka beild!” ― Robert Burns

“The heart that is generous and kind most resembles God.” ― Robert Burns

“Time cannot aid me, my griefs are immortal, Not Hope dare a comfort bestow.” ― Robert Burns

“Falsest of womankind, can’st thou declare, All thy fond, plighted vows fleeting as air!” ― Robert Burns

“And even children lisp the Rights of Man, Amid this mighty fuss just let me mention, The Rights of Woman merit some attention.” ― Robert Burns

“The fear o’ hell ‘s a hangman’s whip, To haud the wretch in order, But where ye feel your honour grip, Let that aye be your border.” ― Robert Burns

“I pick my favorite quotations and store them in my mind as ready armor, offensive or defensive, amid the struggle of this turbulent existence.” ― Robert Burns

“God knows, I’m no the thing I should be, Nor am I even the thing I could be.” ― Robert Burns

“But pleasures are like poppies spread, You seize the flower, its bloom is shed.” ― Robert Burns 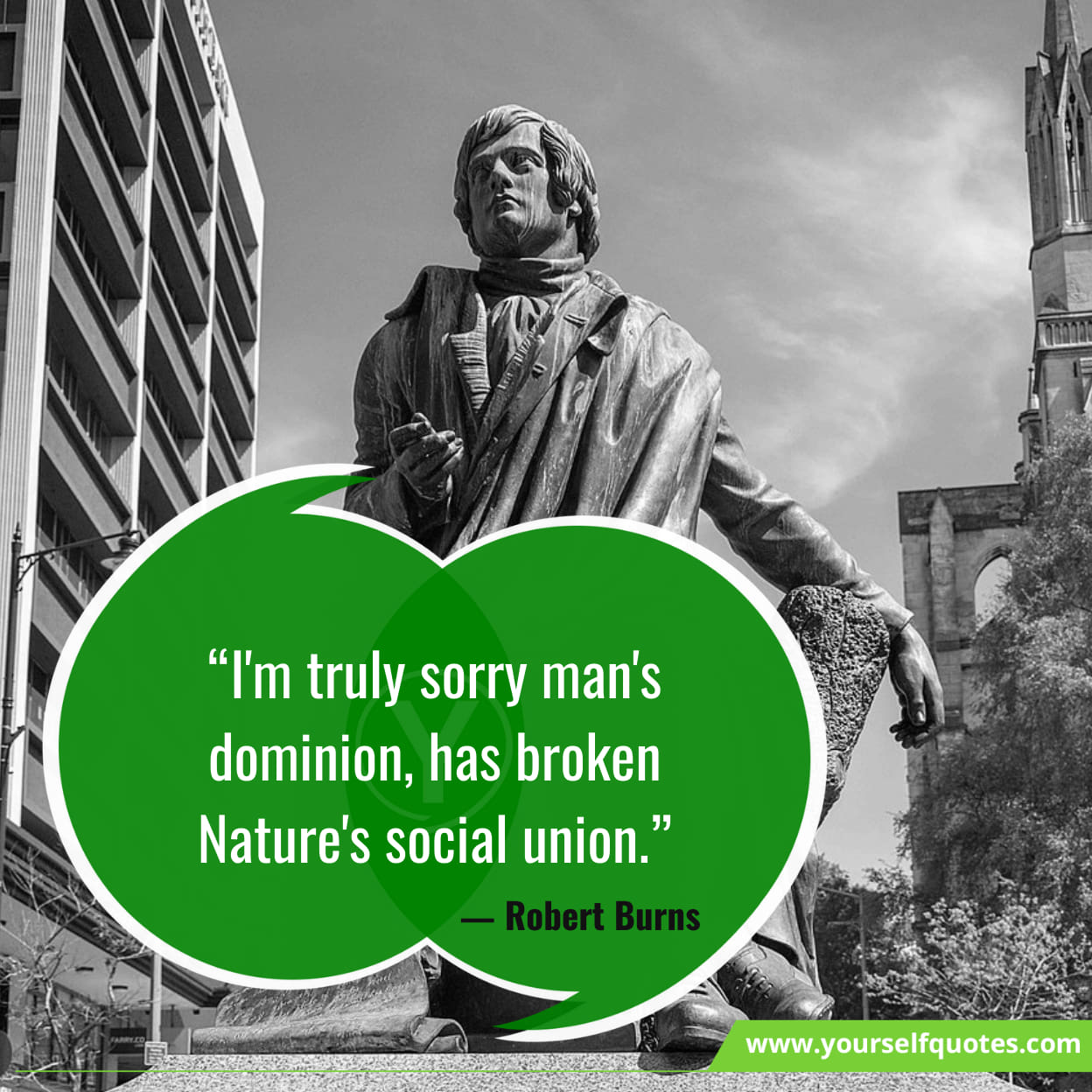 Robert Burns was a man of immense mental strength and character force who never found a place in a class-ridden culture where he could truly exercise his personality. He was known familiarly as Rabbie Burns, the National Bard, Bard of Ayrshire, and the Ploughman Poet and various other names and epithets was a Scottish poet and lyricist.

He is considered to be a pioneer of the Romantic movement, and after his death, he was a great source of inspiration for the pioneers of both populism and marxism, and a cultural figure in Scotland and among the Scottish diaspora worldwide.

Robert took his last breath on July 21, 1796, at a very young age of 37 due to deteriorating health conditions in Dumfries, Scotland.

We hope you enjoyed to know about such a personality from history. So let’s share out these Robert Burn Quotes with all only from Yourself Quotes.

Which are your favorite Robert Burns Quotes? Leave a comment below.