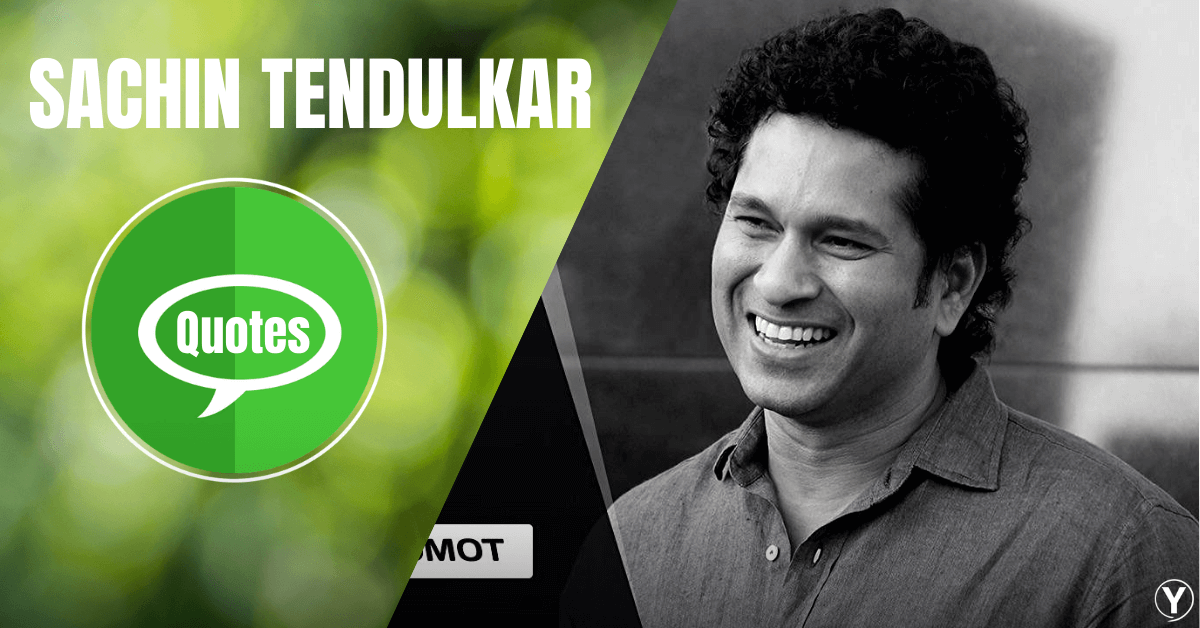 The former Indian International cricketer, Sachin Ramesh Tendulkar is considered as the greatest batsman in the history of cricket. This little master entered into the world of cricket at a very young age of eleven years only.

Sachin Tendulkar Birthday: He was born on 24th April 1973 in Dadar, Mumbai. He was born and brought up in a  Maharashtrian Rajapur Saraswat Brahmin family. His father, Ramesh Tendulkar, was a well-known Marathi novelist and poet. His mother, Rajni, worked in the insurance industry. Sachin Tendulkar got his name from his father. His father’s favorite music director was Sachin Dev Burman.

So he named him Sachin Tendulkar. Sachin had three elder siblings. Sachin Tendulkar was married to Anjali Mehta, a  pediatrician of Gujarati origin on 24th May 1995. The couple is blessed with a loving daughter Sara and a son Arjun Tendulkar.

Sachin Tendulkar started playing cricket at the age of 11. And at the age of 16, he played his first test debut on 15th November 1989 against Pakistan in Karachi. He is the only player who completed more than 30,000 runs in international cricket. This right-handed batsman competed 10,000 ODI runs in his 259 innings. During his successful cricket career, he has been awarded many great titles and awards. He was ranked as the second greatest Test batsman of all time.

In 2010, Sachin Tendulkar was listed as one of the “Most Influential People in the World”. So if you are influenced by this great personality then check out the amazing Sachin Tendulkar Quotes.

“I feel when somebody has been playing cricket for a long time, he creates a separate identity for himself.” ― Sachin Tendulkar

“If you remain humble, people will give you love and respect even after you have finished the game.” ― Sachin Tendulkar 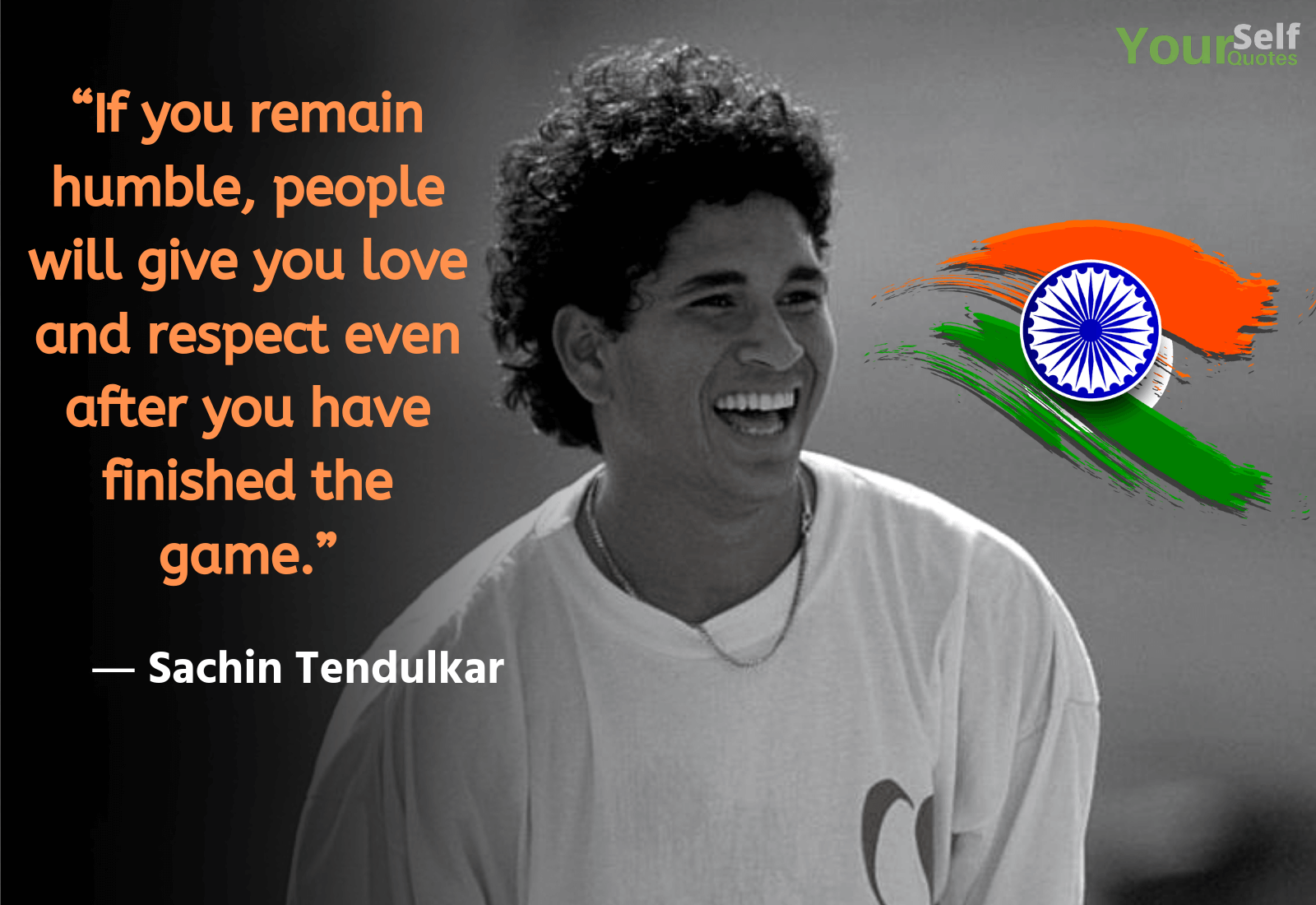 “The only thing that was on my mind was. I want to play for India one day, and I was pretty sure and confident that one day I will. ” ― Sachin Tendulkar

“I have never tried to compare myself to anyone else.” ― Sachin Tendulkar

“Success is a process… During that journey sometimes there are stones thrown at you, and you convert them into milestones.” ― Sachin Tendulkar

“Like I always say, chase your dreams because dreams do come true, and this was one of those moments in my life when it happened.” ― Sachin Tendulkar

“Along with talent, you also need direction.” ― Sachin Tendulkar

“It has been very good here, but the World Cup game was different. It had a different significance to it.” ― Sachin Tendulkar

“It is important to understand that if you do fall, it’s important for you to get right back up again.” ― Sachin Tendulkar

“You got to have a hero in your life, follow his principles. But most importantly you should maintain your own identity.” ― Sachin Tendulkar

“People throw stones at you and you convert them into milestones.” ― Sachin Tendulkar

“At least with me, the match starts much, much earlier than the actual match. ” ― Sachin Tendulkar

“The lesson to be learned from success and failure are equally important. More often than not, failure and sorrow are bigger teachers than success and happiness.” ― Sachin Tendulkar

“I grew up looking at my father as to how to behave. In watching, I grasped so many things. His own temperament was of a calm person. He was very composed and I never saw anger in him. To me, that was fascinating.” ― Sachin Tendulkar

“Critics haven’t taught me my cricket, and they don’t know what my body and mind are up to.” ― Sachin Tendulkar

“There are a few players who don’t like to think about the game.” ― Sachin Tendulkar

“Whatever level you reach getting better never stops.” ― Sachin Tendulkar

“Tendulkar is to cricket what Michael Jordan is to basketball and Muhammad Ali to boxing.”

“In cricket, my superhero is Sachin Tendulkar. He has always been my hero and will continue to remain so.” ―  Virat Kohli

“When we were growing up, we all used to watch Sachin. He was like God to us, he had that aura around him.” — MS Dhoni

The great personality Sachin Tendulkar served his services for the Indian Cricket Team for 24 years. He was a part of the 2011 World Cup-winning team. On 16th November 2013, he retired from all forms of cricket. During his complete cricket career, he played 664 international cricket matches in total, scoring 34,357 runs. Due to his all-rounder personality, he was named as “God of Cricket”, “Little Master” and “Master Blaster”. So are you really impressed by this inspiring personality? Then why not share this inspirational Sachin Tendulkar Quotes Images.

This website uses cookies to improve your experience while you navigate through the website. Out of these cookies, the cookies that are categorized as necessary are stored on your browser as they are essential for the working of basic functionalities of the website. We also use third-party cookies that help us analyze and understand how you use this website. These cookies will be stored in your browser only with your consent. You also have the option to opt-out of these cookies. But opting out of some of these cookies may have an effect on your browsing experience.
Necessary Always Enabled
Necessary cookies are absolutely essential for the website to function properly. This category only includes cookies that ensures basic functionalities and security features of the website. These cookies do not store any personal information.
Non-necessary
Any cookies that may not be particularly necessary for the website to function and is used specifically to collect user personal data via analytics, ads, other embedded contents are termed as non-necessary cookies. It is mandatory to procure user consent prior to running these cookies on your website.
SAVE & ACCEPT
22 Shares
Copy link
CopyCopied
Powered by Social Snap