Sundar Pichai is the Indian-American Business Executive and one of the most important personalities of the world. Since 10 August 2015, he became very famous because on this date, he was announced to be the new CEO of Google. Formerly, he was the Product Chief of Google. His real name is Pichai Sundararajan, but as it is difficult to pronounce, He is called Sundar Pichai. He is also a board member of Alphabet Inc., CapitalG, and Magic Leap.

Sundar Pichai Born on July 12, 1972, in Madurai, India, Pichai, from his very early age started taking interest in technology-related knowledge. He started his early education from Jawahar Vidyalaya. After completing his secondary education, Pichai got enrolled in Vana Vani School to complete his intermediate level studies. Sundar Pichai then got the degree of metallurgical engineering from Indian Institute of Technology Kharagpur. Pichai also holds M.S. and MBA degrees from Stanford University and Wharton School of the University of Pennsylvania respectively. 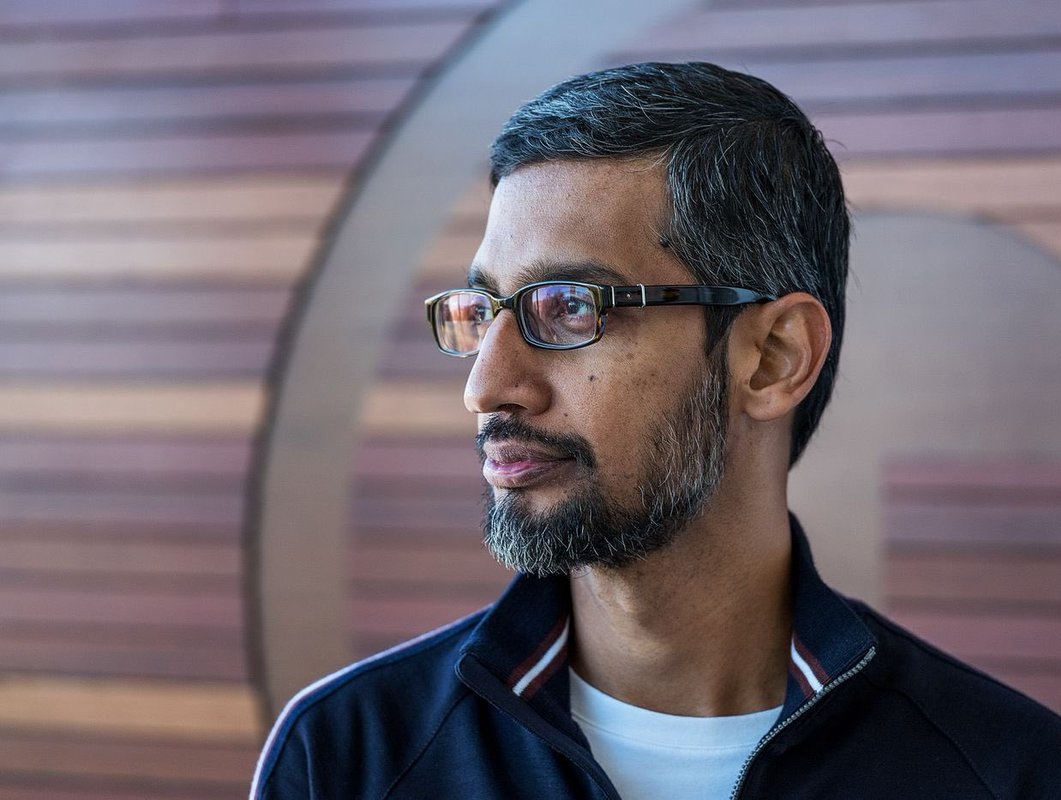 Pichai is from a respectable family of Tamil Nadu. His father’s name was Regunatha Pichai and he was an electrical engineer. He worked at General Electric Company and also ran a manufacturing plant which manufactured electrical components. Sundar Pichai’s mother Lakshmi was a speech transcriber. He got married to Anjali Pichai and they have two children, a boy, and a girl. Sundar spent his childhood in growing in a two-room apartment in Ashok Nagar and now he owns a house in Brooklyn that is worth more than 8 million dollars. 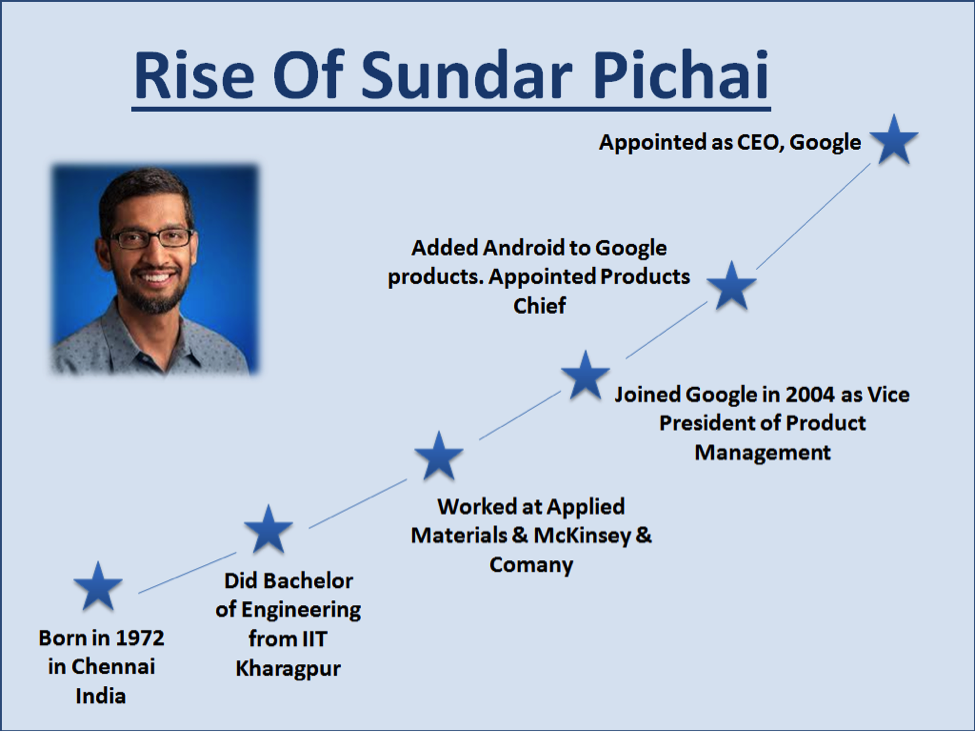 After acquiring all of his degrees, Sundar started his working career. He started his job at Google in 2004. At the time of joining, he led the department of Products Management. He managed a large number of Google products including Google Drive, Gmail, Google Maps, and Google Chrome. In 2013, he also started managing Android.

1. It is Important to Follow your Dreams and Heart. Do Something that Excites You. ― Sundar Pichai

2. As a leader, It is important to not just see your own success, but focus on the success of others. ― Sundar Pichai 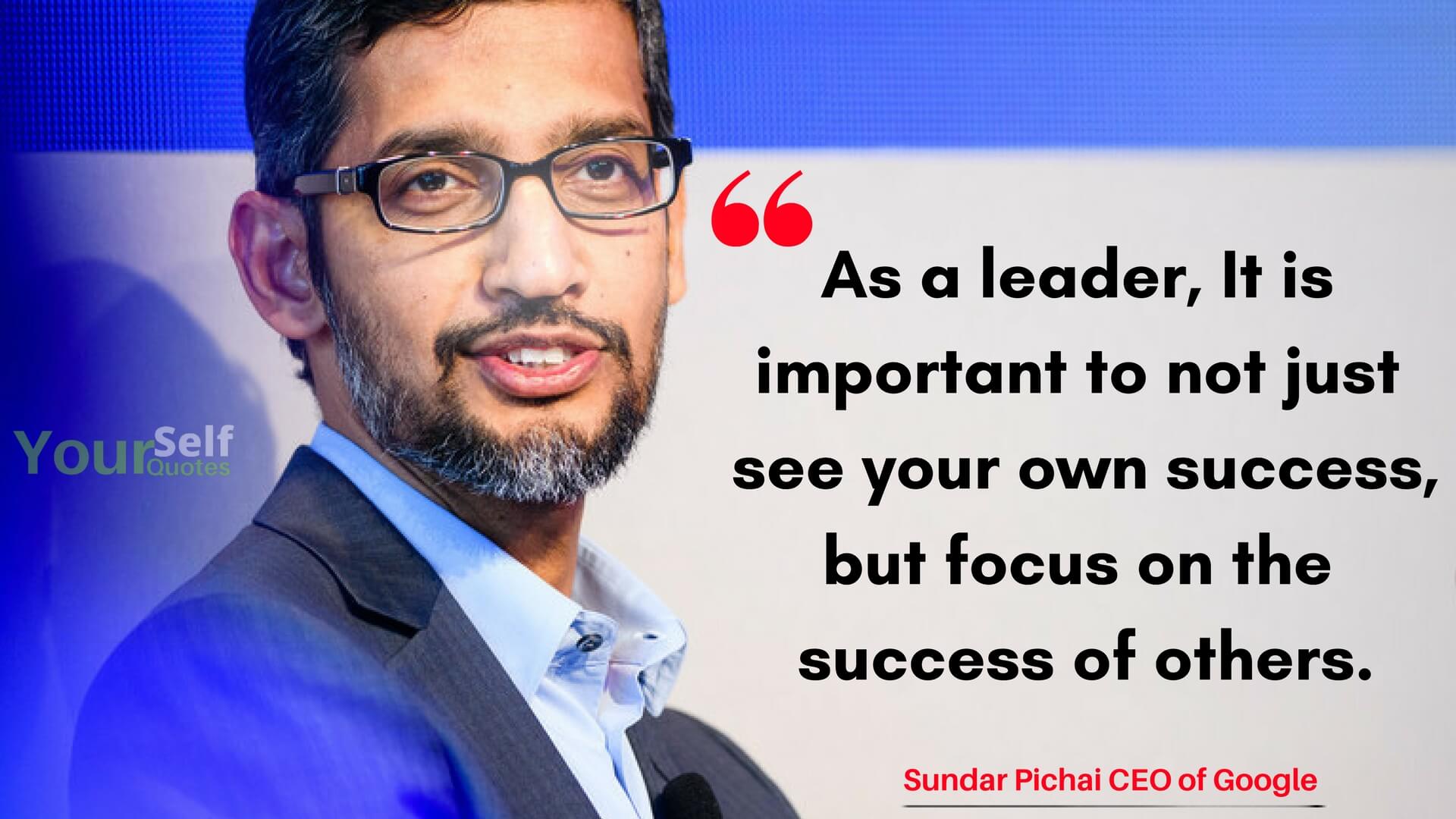 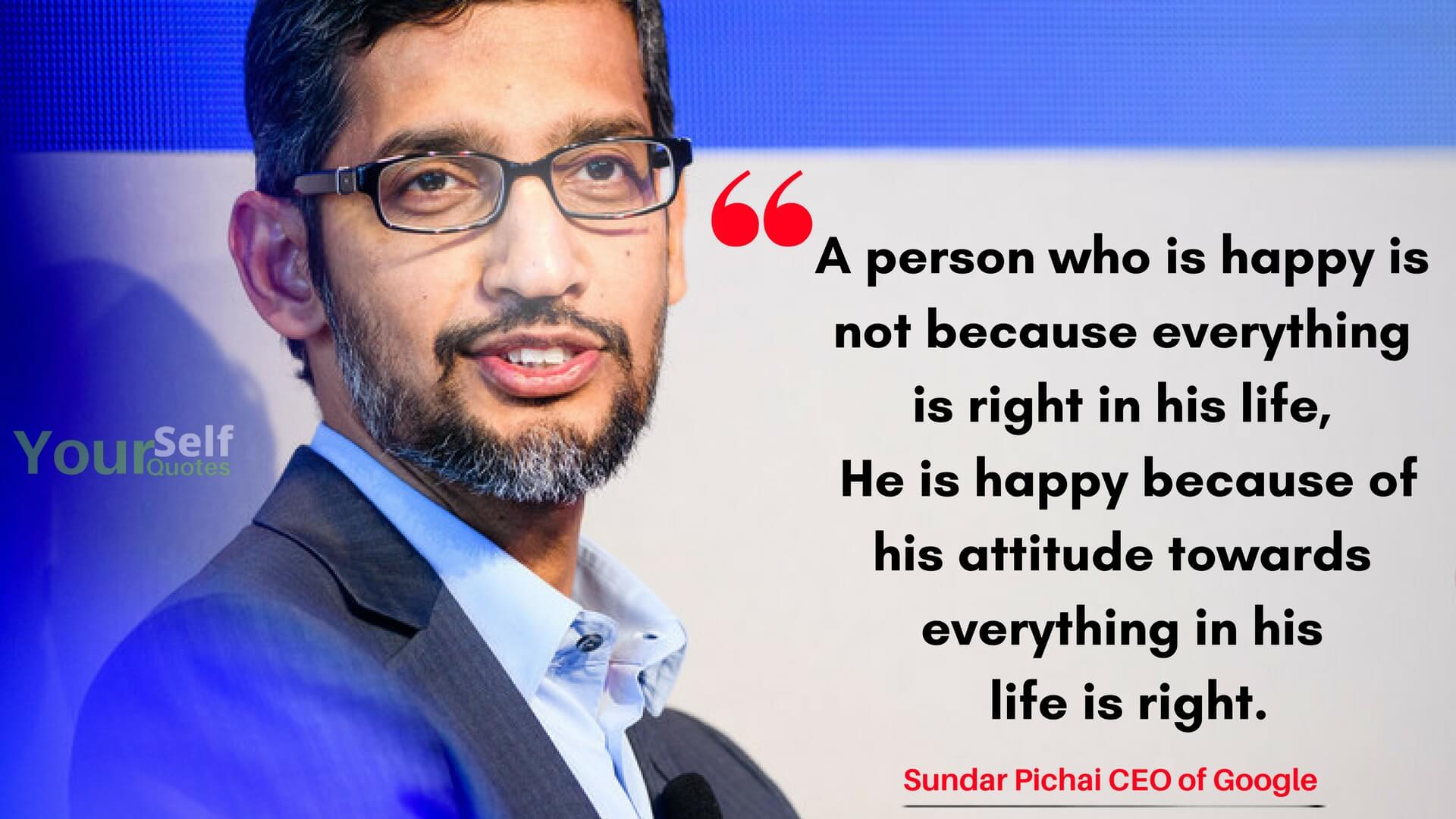 4. it is always good to work with people who make you feel insecure about yourself. That way, you will constantly keep pushing your limits. ― Sundar Pichai 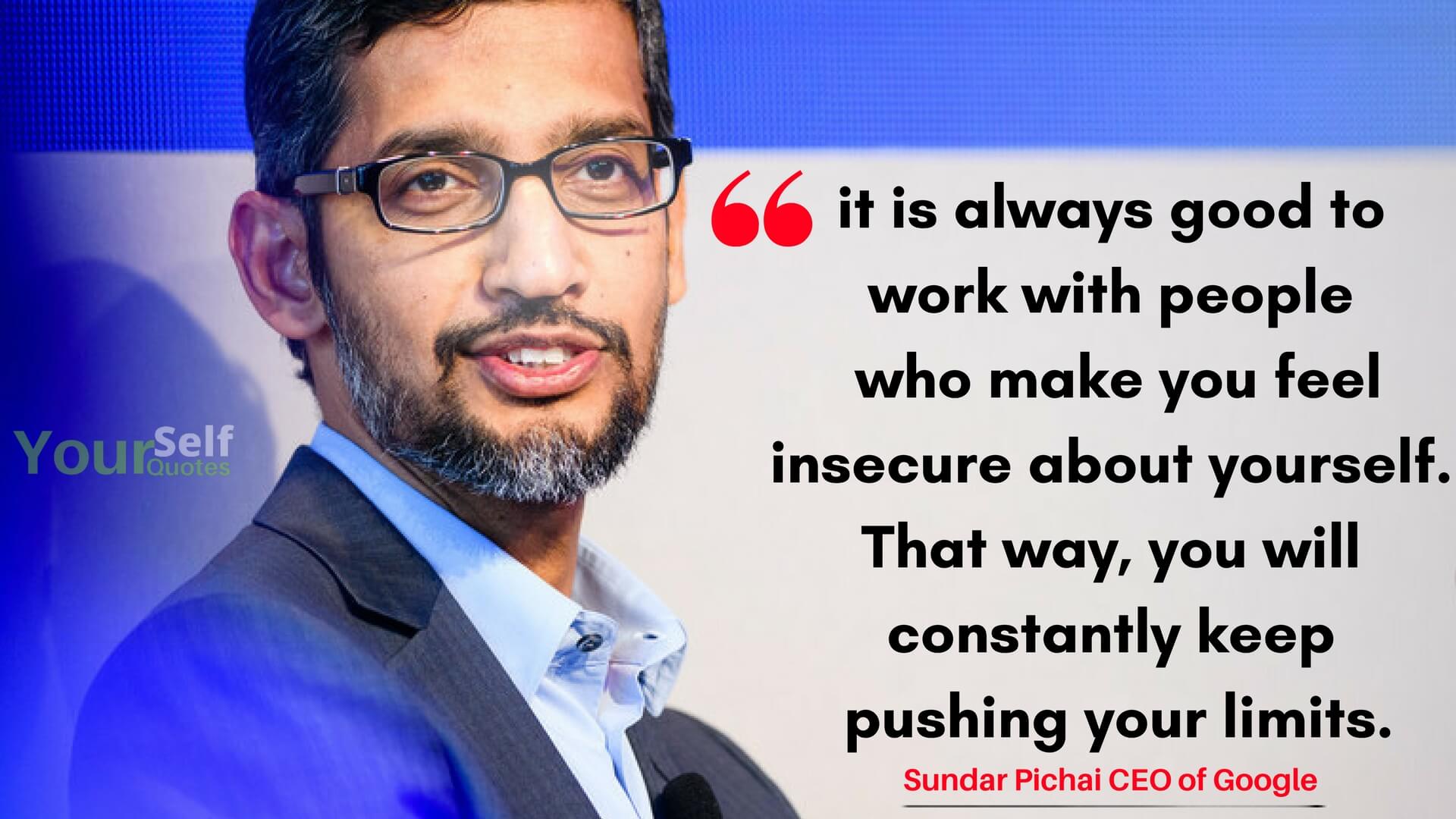 5. Let yourself feel insecure from time, It will help you grow as an individual. ― Sundar Pichai 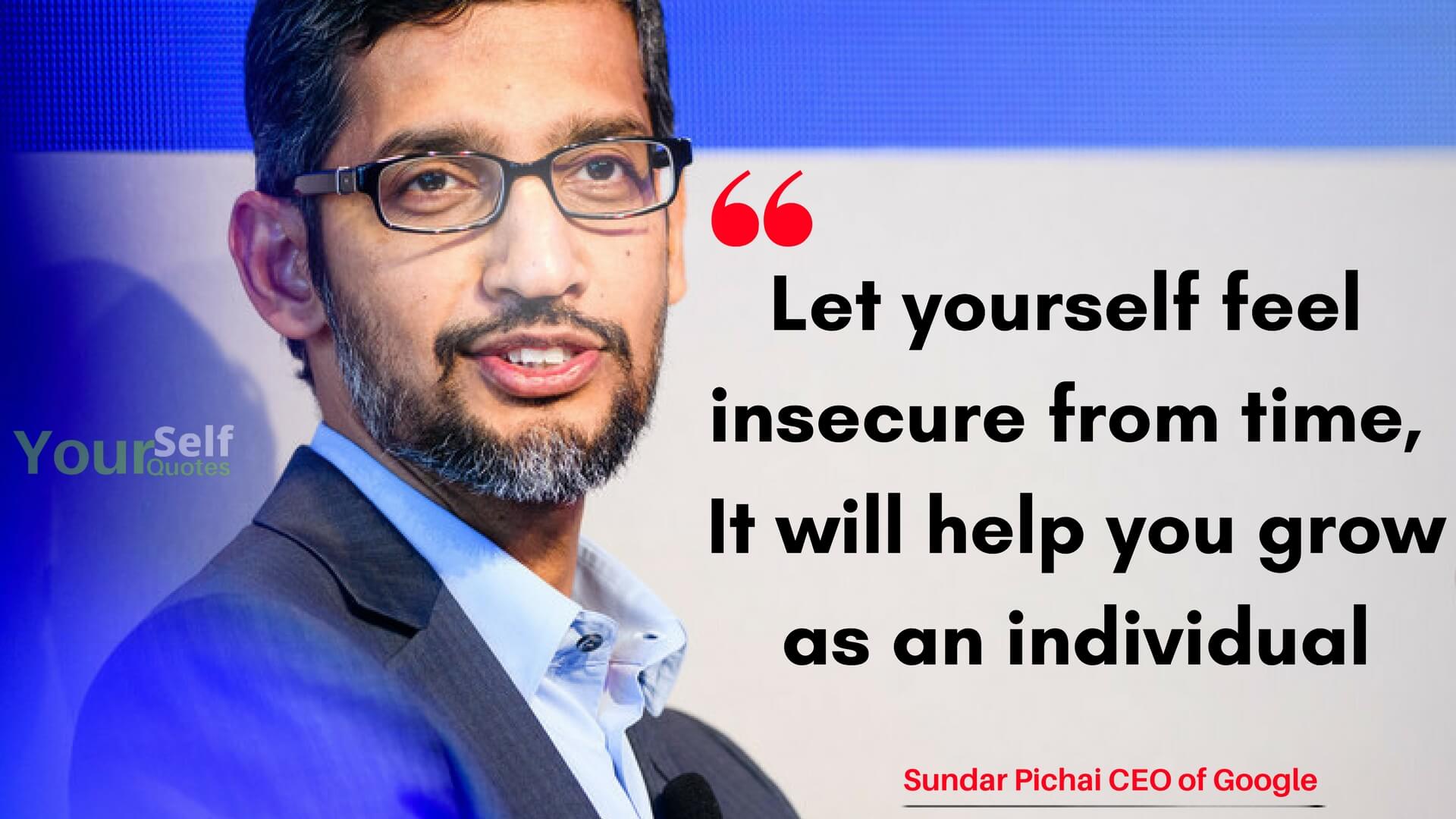 6. You might fail a few times, but that’s Ok. you end up doing something worthwhile which you learn a great deal from. ― Sundar Pichai

7. Wear your failure as a badge of honor! ― Sundar Pichai

8. Al is probably the most important thing humanity has ever worked on. ― Sundar Pichai 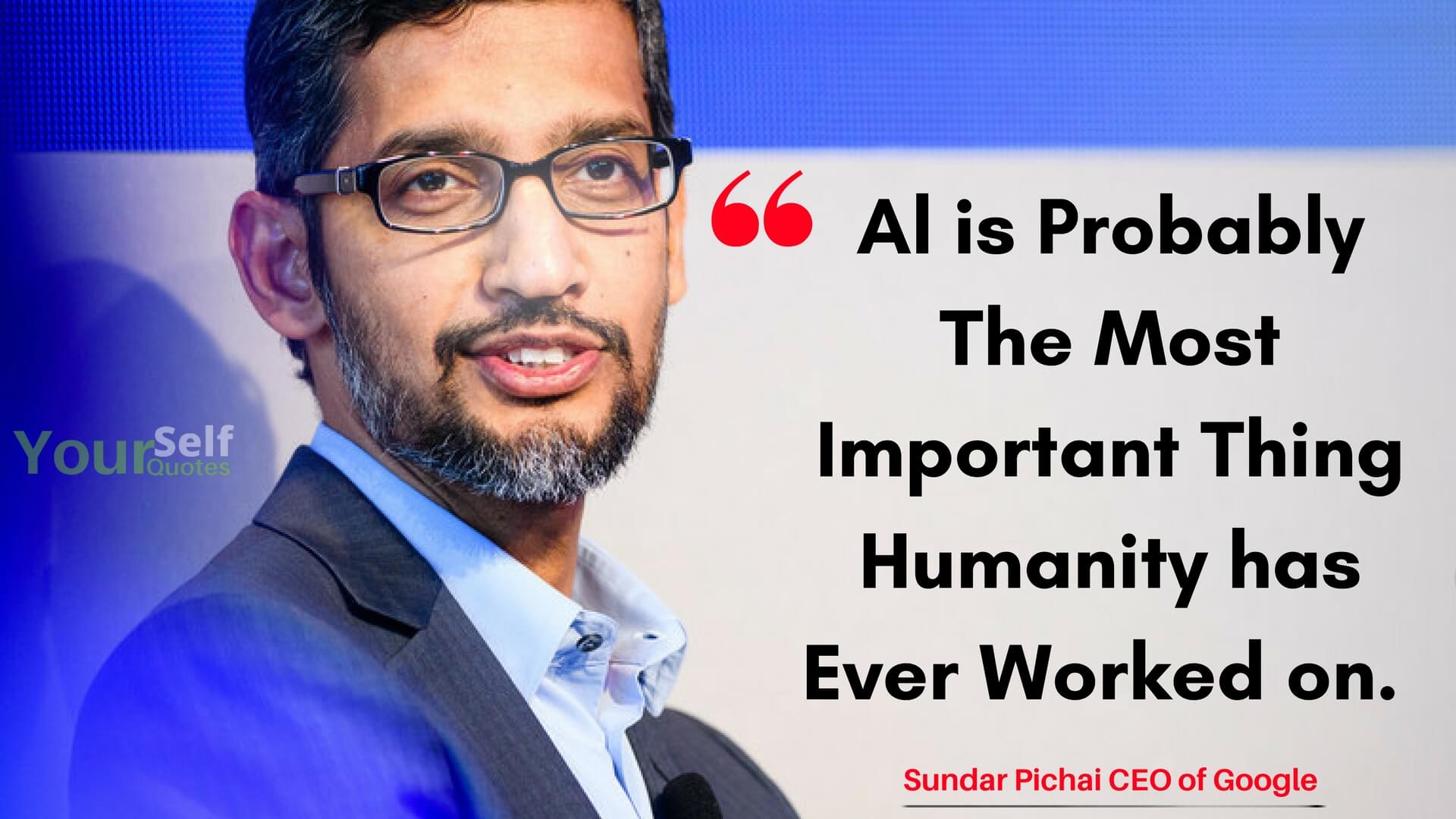 10. We try to use deep computer science to what we make so that we have a differentiated approach to solving problems. ― Sundar Pichai 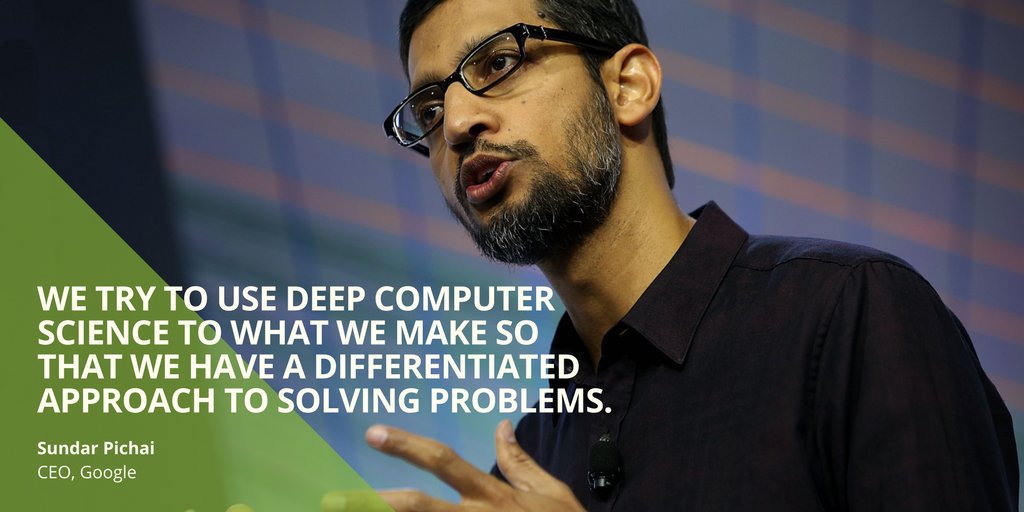 11. I love technology while growing up. ― Sundar Pichai

12. We are interested in India because it is amazingly young. ― Sundar Pichai

13. India will be a global player in the digital economy. ― Sundar Pichai[

From this great man’s Sundar Pichai, we get the lesson that it doesn’t matter from which city are we. If we are hardworking, then the success will for sure knock the doors of our homes. In his childhood, Sundar used to live in a two rooms apartment and now he lives in a house that is worth more than 8 million dollars. His annual salary is 200 million dollars.

Keep visiting our website regularly for peace and encouragement. Please don’t forget to share this Sundar Pichai Quote, with your friend’s family and loved ones.

Robert Downey Jr. Quotes That Will Make You Starry