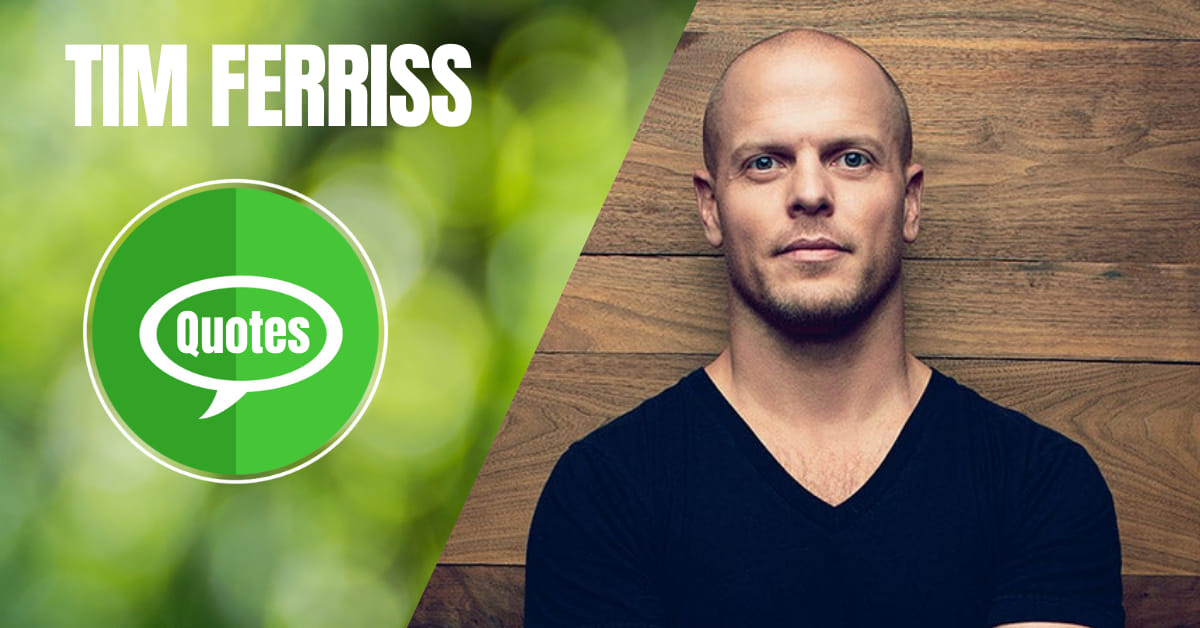 Tim Ferriss is an American entrepreneur and self-development author. He’s written several books, including his best-selling ‘The 4 Hour Work Week.’

He is best known as an angel investor who has assisted in the formation of many well-known start-ups.

He was born and raised in New York City and received his early education at ‘St. Paul’s School’ in Concord, New Hampshire. He later attended ‘Princeton University,’ where he earned a BA in East Asian studies.

He claimed that during his final year of college, he struggled with severe mental issues such as depression and bipolar disorder. The majority of it was due to his existential crisis at the time. He even admitted that he had considered suicide several times during that time period. However, his difficult experiences taught him a lot, and he now considers that period to be one of the turning points in his life.

He started working in the sales department of a data company in 2000. He initially wanted to work in the software and technology industry, but he had bigger plans and hoped to one day start his own business.

The book, titled ‘The 4-Hour Workweek,’ was released in 2007 and quickly became a best-seller. The book contained information about Tim’s life, his dark times, and what helped him overcome them.

He also discussed his perspective on the traditional way of life, which involves working hard until retirement so that one can relax later. The book spent four years on the New York Times Best Seller list and has been translated into 40 languages. It has also sold over 2 million copies globally.

Many people praised him for his efforts to assist emerging technology companies. Many publications also honoured him. Tim was named to ‘The New York Times’ list of ‘Notable Angel Investors’ in the mid-2010s. He has also appeared on CNN and has been described as one of the world’s leading investors in the technology industry.

By 2015, he had invested in more than a dozen companies, which began to have an impact on his mental health. As a result, he later announced that he was taking a break from investing in new companies. In 2017, he also left Silicon Valley because there were no new ventures in which he could invest.

He has also invested in and raised funds for psychedelic drug research.

Some of the Tim’s astonishing books include:

Tim’s advice has proven valuable over the years, as evidenced by the quotes below.

Here are 75 Tim Ferriss quotes that will truly inspire you:

“When you try to do something big it’s hard to fail completely.” — Tim Ferriss 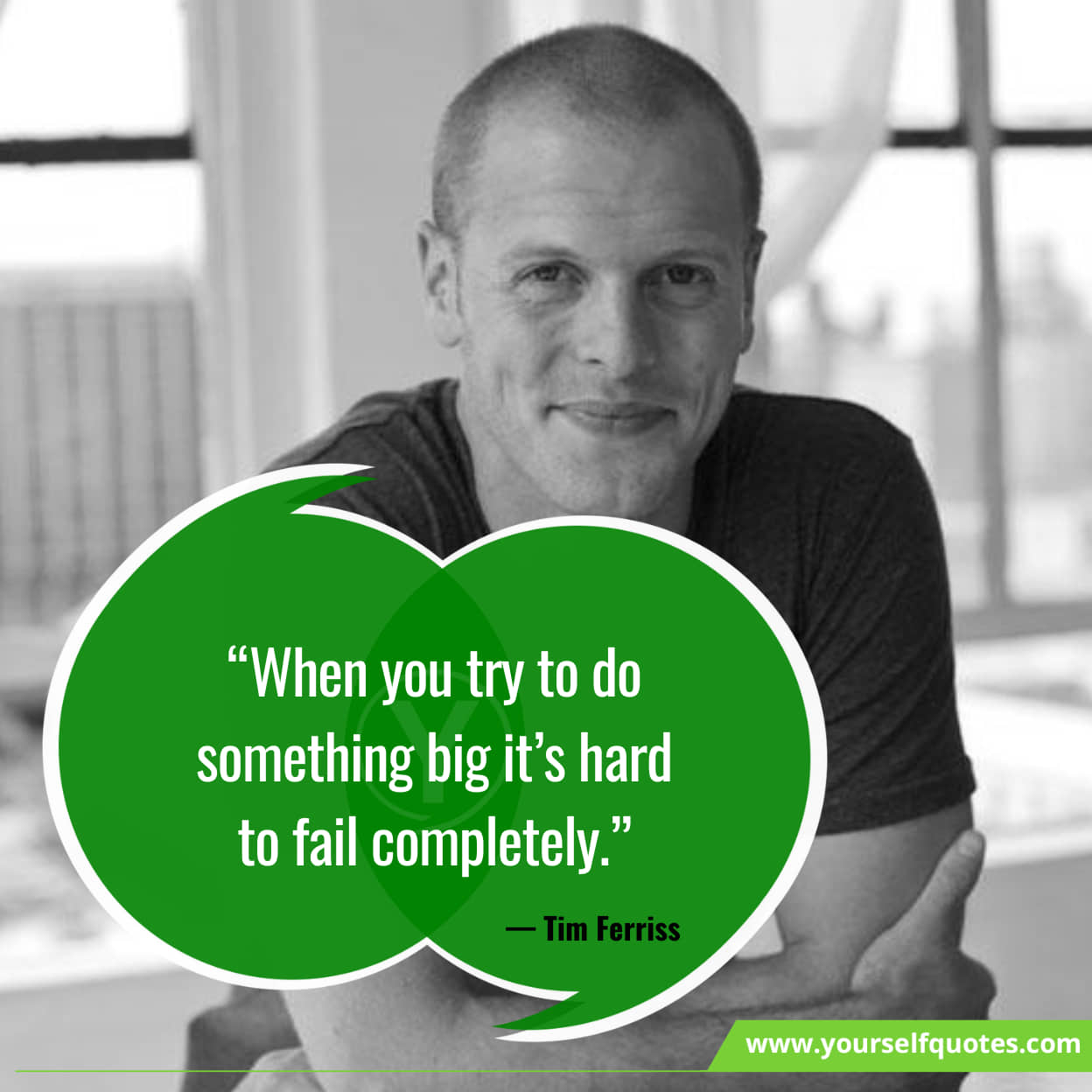 “People are fond of using the ‘it’s not what you know, it’s who you know’ adage as an excuse for inaction, as if all successful people are born with powerful friends.” — Tim Ferriss

“But you are the average of the five people you associate with most, so do not underestimate the effects of your pessimistic, unambitious, or disorganized friends.” — Tim Ferriss

“If someone isn’t making you stronger, they’re making you weaker.” — Tim Ferriss

“If you let pride stop you, you will hate life.” — Tim Ferriss

“Most people are fast to stop you before you get started but hesitate to get in the way if you’re moving.” — Tim Ferriss

“In school as in life, having a reputation for being assertive will help you receive preferential treatment without having to beg or fight for it every time.” — Tim Ferriss

“The best way to counter-attack a hater is to make it blatantly obvious that their attack has had no impact on you.” — Tim Ferriss

“Different is better when it is more effective or more fun.” — Tim Ferriss

“The most important actions are never comfortable.” — Tim Ferriss 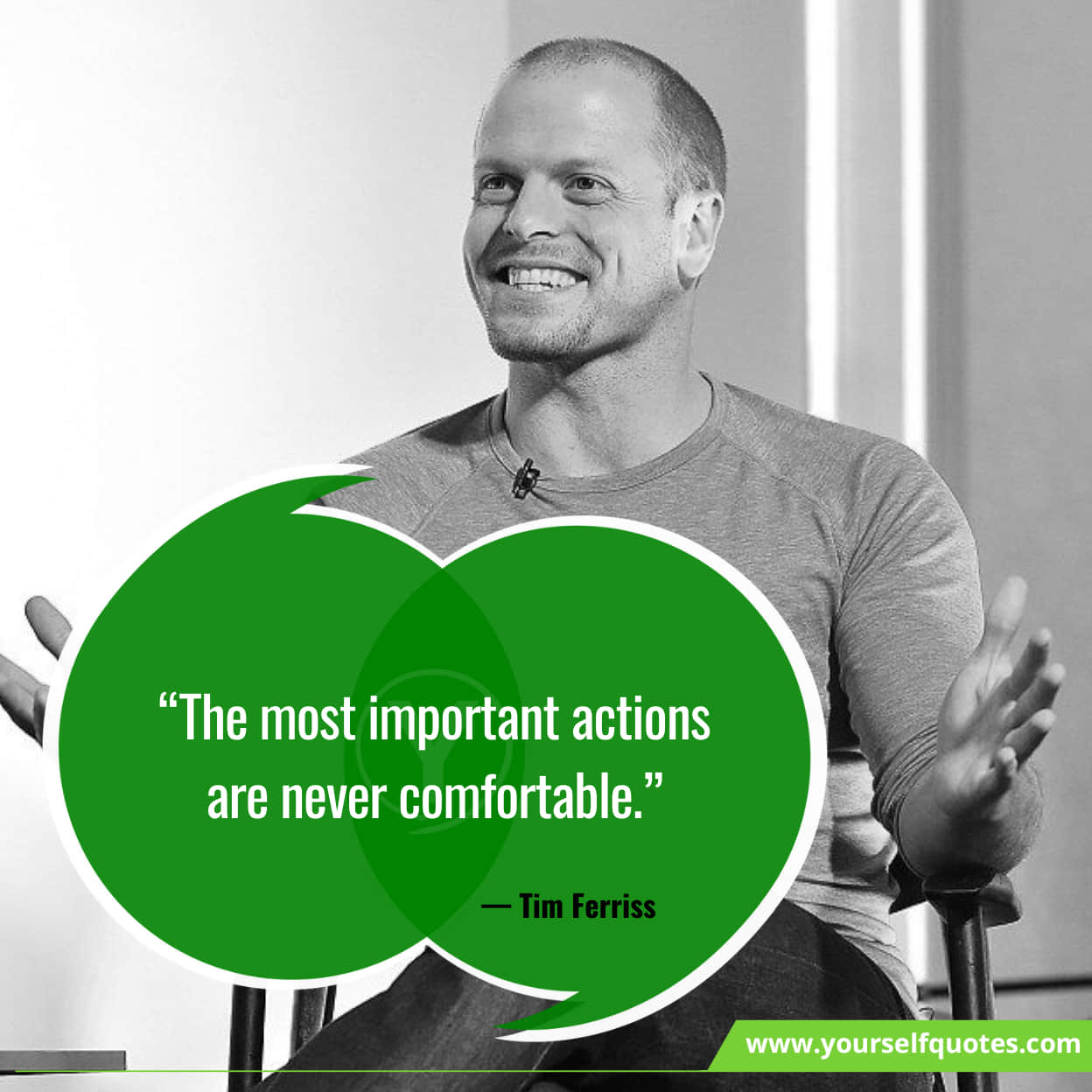 “It is predicated on the assumption that you dislike what you are doing during the most physically capable years of your life. This is a nonstarter—nothing can justify that sacrifice.” — Tim Ferriss

“The fishing is best where the fewest go and the collective insecurity of the world makes it easy for people to hit home runs while everyone is aiming for base hits.” — Tim Ferriss

“For all their bitching about what’s holding them back, most people have a lot of trouble coming up with the defined dreams they’re being held from.” — Tim Ferriss

“Remember — boredom is the enemy, not some abstract failure.” — Tim Ferriss

“The bottom line is that you only have the rights you fight for.” — Tim Ferriss

“Information is useless if it is not applied to something important or if you will forget it before you have a chance to apply it.” — Tim Ferriss

“The best entrepreneurs I’ve ever met are all good communicators. It’s perhaps one of the very few unifying factors.” — Tim Ferriss

“An entrepreneur isn’t someone who owns a business, it’s someone who makes things happen.” — Tim Ferriss 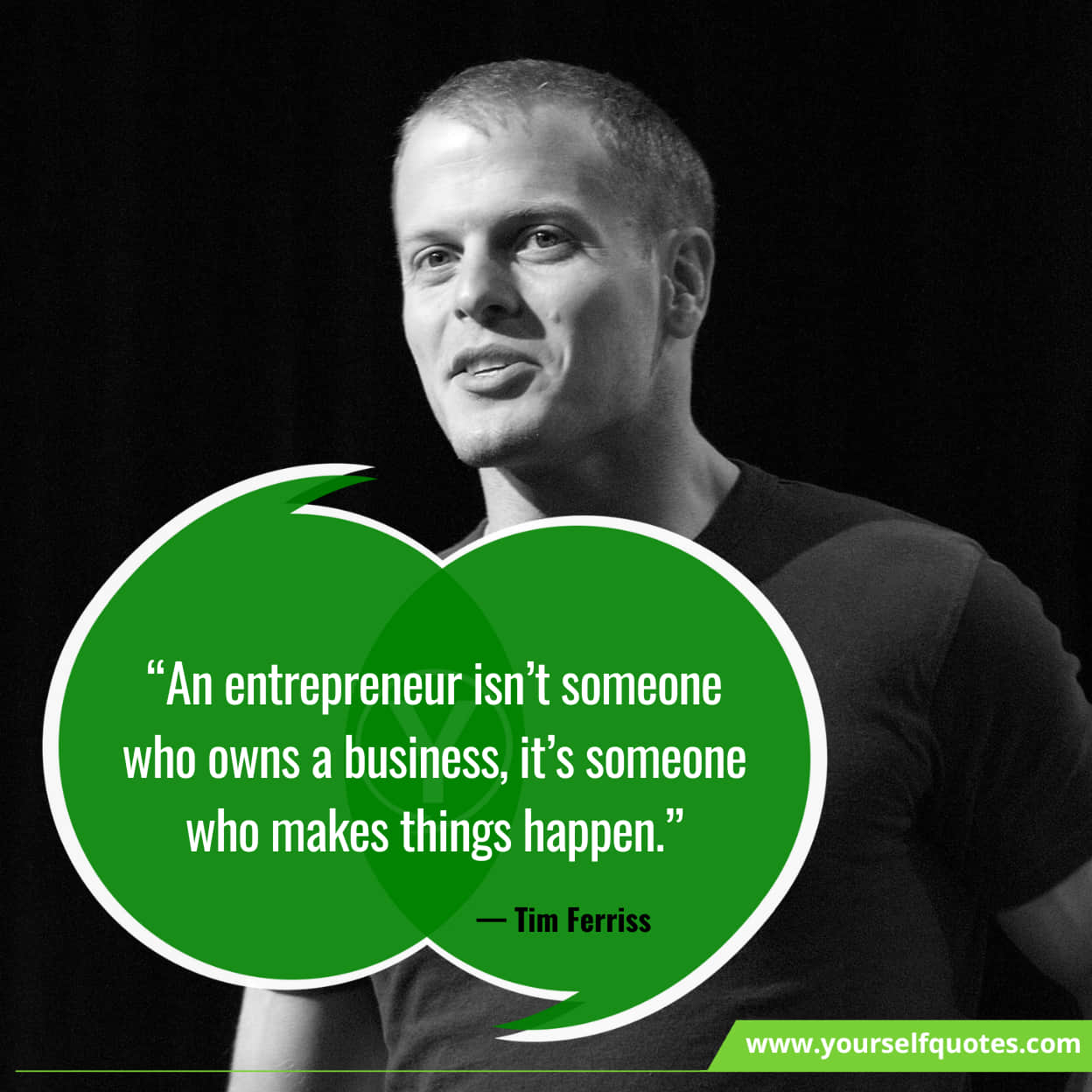 “Pareto’s Law can be summarized as follows: 80% of the outputs result from 20% of the inputs.” — Tim Ferriss

“I will take as a given that, for most people, somewhere between six and seven billion of them, the perfect job is the one that takes the least time.” — Tim Ferriss

“You need to know what your unique strengths are and be willing to delegate.” — Tim Ferriss

“The goal is not to simply eliminate the bad, but to pursue and experience the best in the world.” — Tim Ferriss

“If you want to have more, do more, and be more, it all begins with the voice that no one else hears.” — Tim Ferriss 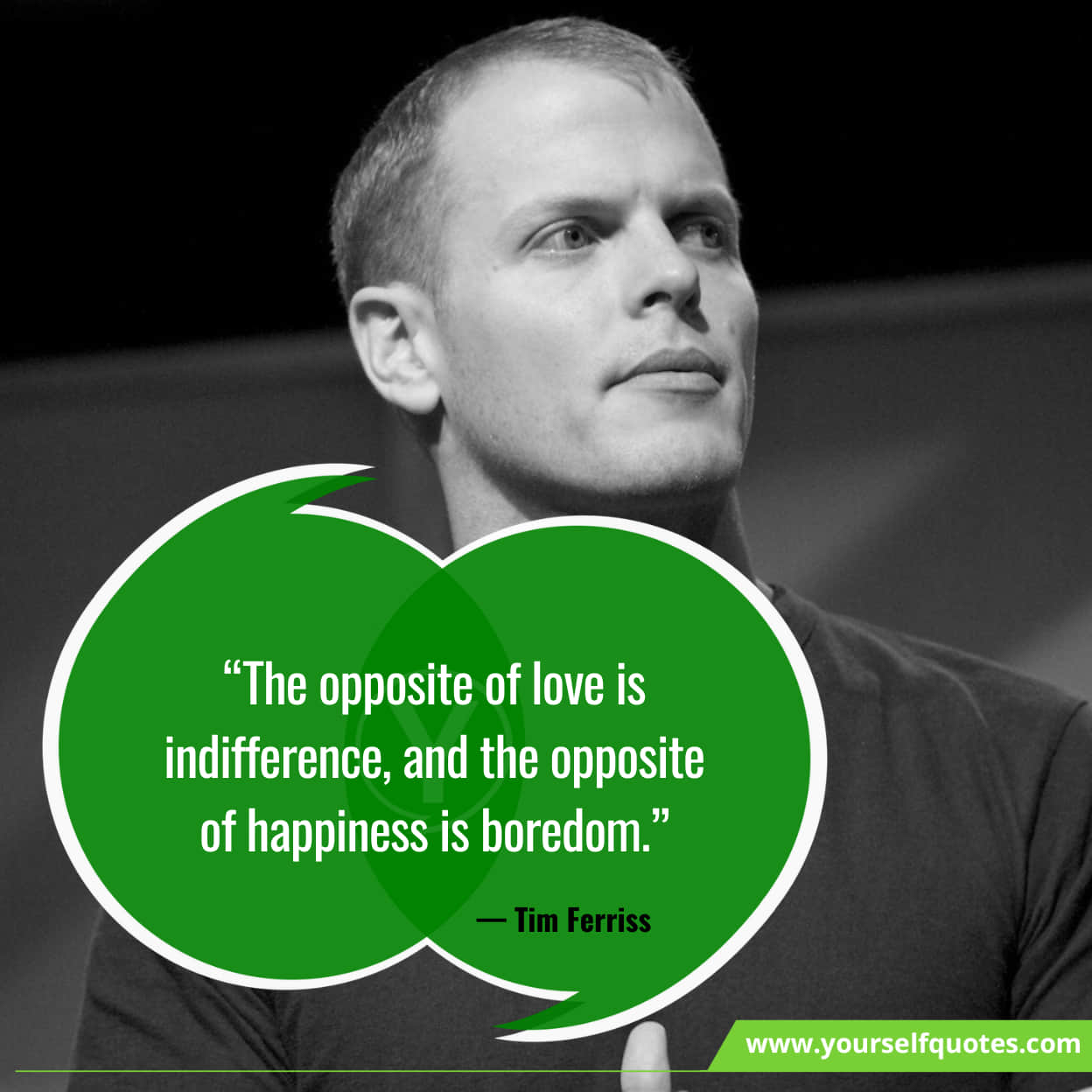 “Doing something unimportant well does not make it important.” — Tim Ferriss

“Focus on being productive instead of busy.” — Tim Ferriss

“Lack of time is actually lack of priorities.” — Tim Ferriss

“If you spend your time, worth $20-25 per hour, doing something that someone else will do for $10 per hour, it’s simply a poor use of resources.” — Tim Ferriss

“I want to measure twice, and cut once; therefore, the vast majority of my important work is deciding what to work on.” — Tim Ferriss

“If the challenge we face doesn’t scare us, then it’s probably not that important.” — Tim Ferriss

“Greatness is setting ambitious goals that your former self would have thought impossible, and trying to get a little better every day.” — Tim Ferriss

“To do the impossible, you need to ignore the popular.” — Tim Ferriss

“Being able to quit things that don’t work is integral to being a winner.” — Tim Ferriss

“It is possible to become world-class, enter the top 5% of performers in the world, in almost any subject within 6-12 months, or even 6-12 weeks.” — Tim Ferriss

“What we fear doing most is usually what we most need to do.” — Tim Ferriss 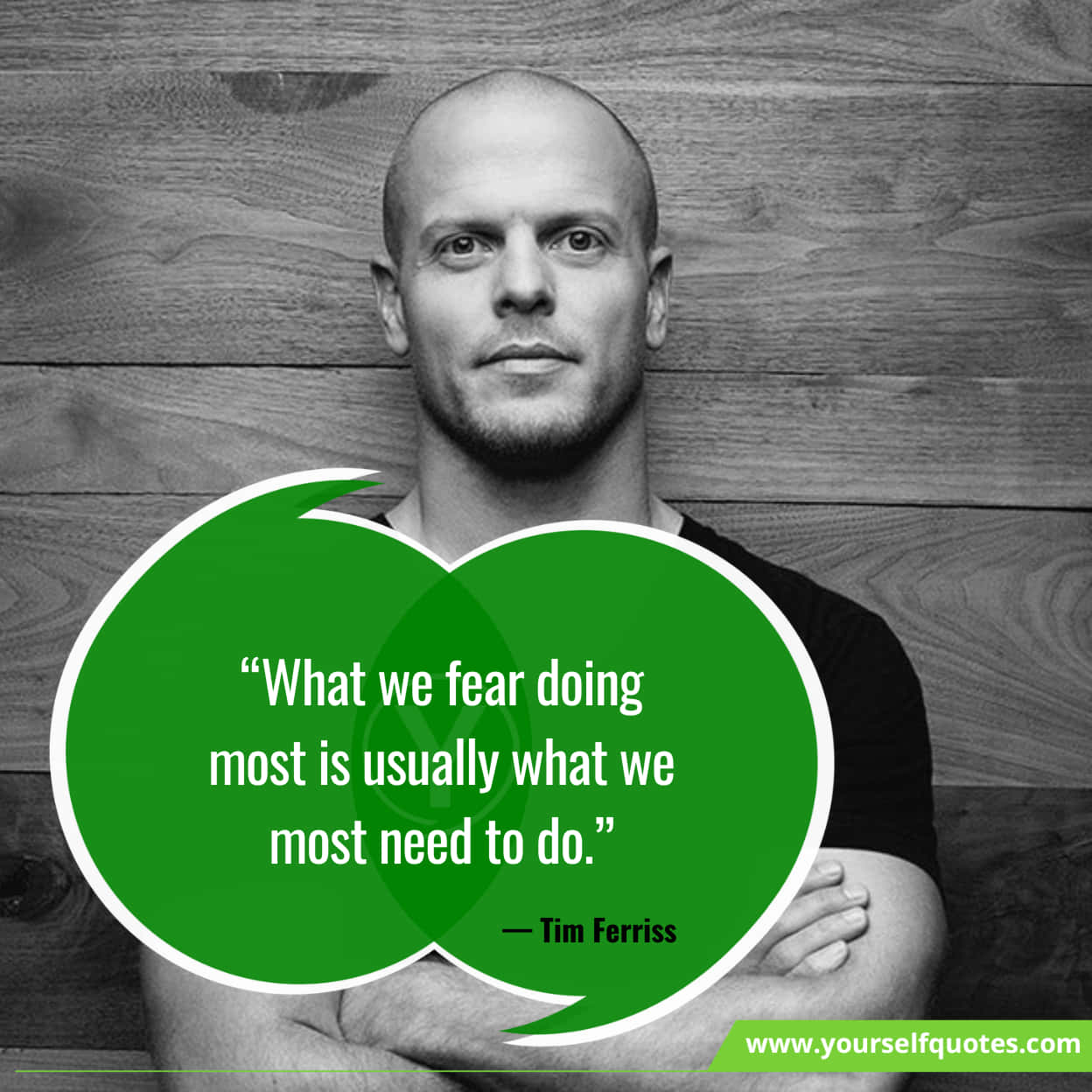 “Doing less is not being lazy. Don’t give in to a culture that values personal sacrifice over personal productivity.” — Tim Ferriss

“By working only when you are most effective, life is both more productive and more enjoyable. It’s the perfect example of having your cake and eating it, too.” — Tim Ferriss

“The world is changed by your example, not by your opinion.” — Tim Ferriss

“Excitement is the more practical synonym for happiness, and it is precisely what you should strive to chase. It is the cure-all.” — Tim Ferriss

“Many a false step was made by standing still.” — Tim Ferriss

“Someday” is a disease that will take your dreams to the grave with you.” — Tim Ferriss

“Life is too short to be small.” — Tim Ferriss

“To enjoy life, you don’t need fancy nonsense, but you do need to control your time and realize that most things just aren’t as serious as you make them out to be.” — Tim Ferriss

“A person’s success in life can usually be measured by the number of uncomfortable conversations he or she is willing to have.” — Tim Ferriss

“Poisonous people do not deserve your time. To think otherwise is masochistic.” — Tim Ferriss

“$1,000,000 in the bank isn’t the fantasy. The fantasy is the lifestyle of complete freedom it supposedly allows.” — Tim Ferriss

“If you are insecure, guess what? The rest of the world is, too. Do not overestimate the competition and underestimate yourself. You are better than you think.” — Tim Ferriss

Tim Ferriss was named one of Fast Company’s “Most Innovative Business People” and one of Fortune’s “40 Under 40” in 2012.

He is the author of five #1 New York Times and Wall Street Journal bestsellers, including The 4-Hour Workweek and Tools of Titans: The Tactics, Routines, and Habits of Billionaires, Icons, and World-Class Performers.

He is an early-stage technology investor/advisor (Uber, Facebook, Shopify, Duolingo, Alibaba, and 50+ others) and the author of five #1 New York Times and Wall Street Journal bestsellers, including The 4-Hour Workweek.

Due to the influence of The Tim Ferriss Show podcast, which is the first business/interview podcast to exceed 100 million downloads, The Observer and other media have dubbed Tim “the Oprah of audio.” The number of downloads has now surpassed 700 million.

Thank you for taking the time to look through this collection of Tim Ferriss’s best quotes!

Which are your favorite Tim Ferriss Quotes? Leave a comment below.

Dream Quotes To Make You Believe in Your Dreams

Most Popular Motivational Quotes That will Change Your Life