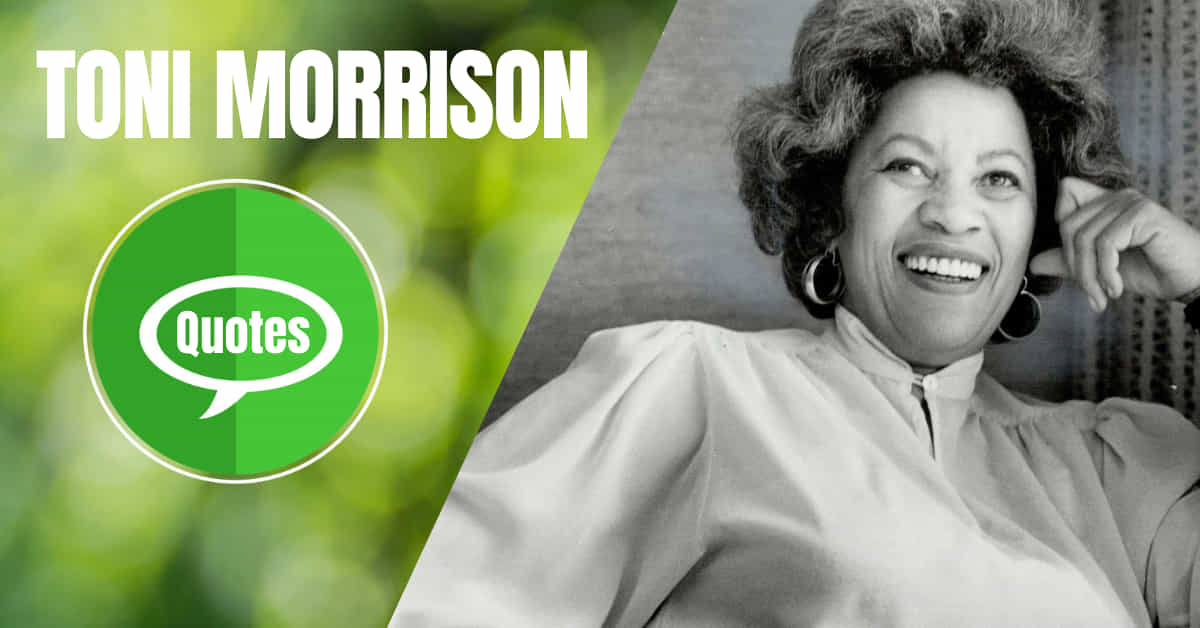 Chloe Anthony Wofford Morrison, popularly known as Toni Morrison, was a famous American Novelist. Apart from being a successful novelist, she was a renowned essayist, editor, teacher, and professor emeritus at Princeton University.

Toni was born on 18th February 1931 in Lorain, Ohio, United States. Toni was born to Ramah (née Willis) and George Wofford. Ramah was a homemaker and a devout member of the African Methodist Episcopal Church. And George Wofford worked odd jobs and as a welder for U.S. Steel.

Morrison graduated from Howard University in 1953. Later she started teaching English at Howard University. She began writing fiction in the university. Her first novel was ‘The Bluest Eye’, which she used to write every morning around 4 am while raising her two children alone.

This novel was published in 1970. Her writing style was highly appreciated and praised. Her other popular novels include ‘Sula’, ‘Song of Solomon’, ‘Tar Baby’, and many others. Her first play was ‘Dreaming Emmett’. Her most celebrated and popular novel was ‘Beloved’, which was published in 1987. This novel was about love and African-American history. The lady was acknowledged with the Nobel Prize in Literature in 1993. She was the first black woman of any nationality to win this prize.

Morrison had a great interest in writing books for children with her younger son, Slade Morrison, who was a painter and a great musician. Her novels concentrated majorly on black women. On 15th July 2015, a film titled ‘Imagine-Toni Morrison Remembers’ directed by Jill Nicholas was shown on BBC One television. In this movie, Morrison talked to Alan Yentob about her life and work. The other documentary films include ‘The Foreigner’s Home’, ‘Toni Morrison: The Pieces I Am’.

Toni Morrison was an incredible personality and a great writer. So let’s explore some of the best Toni Morrison Quotes.

“You want to fly, you got to give up the shit that weighs you down.” ― Toni Morrison 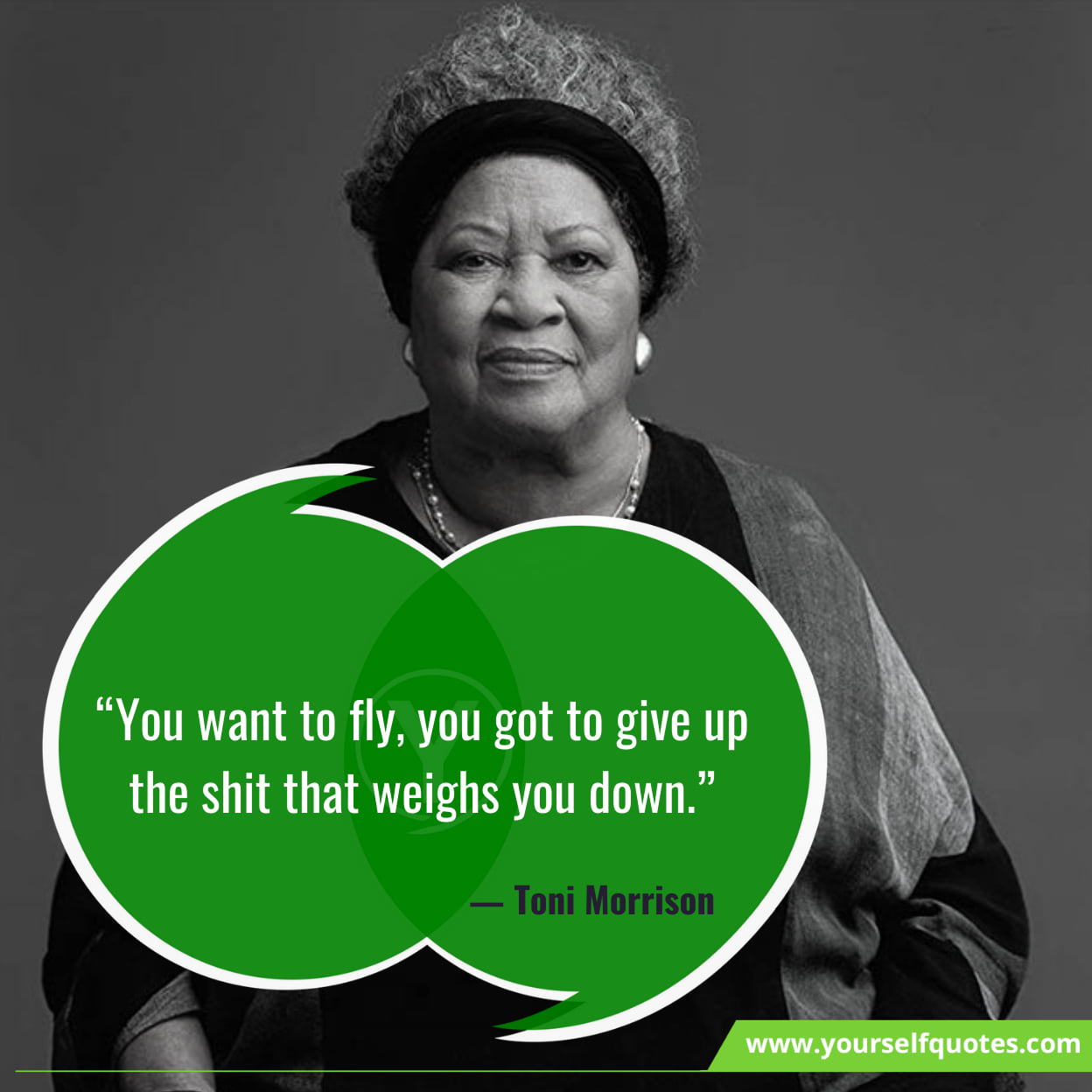 “You are your best thing.” ― Toni Morrison

“If you want to fly, you have to give up everything that weighs you down.” ― Toni Morrison

“Love is or it ain’t. Thin love ain’t love at all.” ― Toni Morrison

“Definitions belong to the definers, not the defined.” ― Toni Morrison

“Like any artist without an art form, she became dangerous.” ― Toni Morrison

“As you enter positions of trust and power, dream a little before you think.” ― Toni Morrison

“I think that our expectations of women are very low. If women just stand up straight for thirty days,

“Nagging. Poison. Gossip. Sneaking around instead of confrontation.” ― Toni Morrison

“It was a silly age, twenty-five; too old for teenaged dreaming, too young for settling down. Every corner was a possibility and a dead end.” ― Toni Morrison

“In this country American means white. Everybody else has to hyphenate.” ― Toni Morrison

“Make a difference about something other than yourselves.” ― Toni Morrison 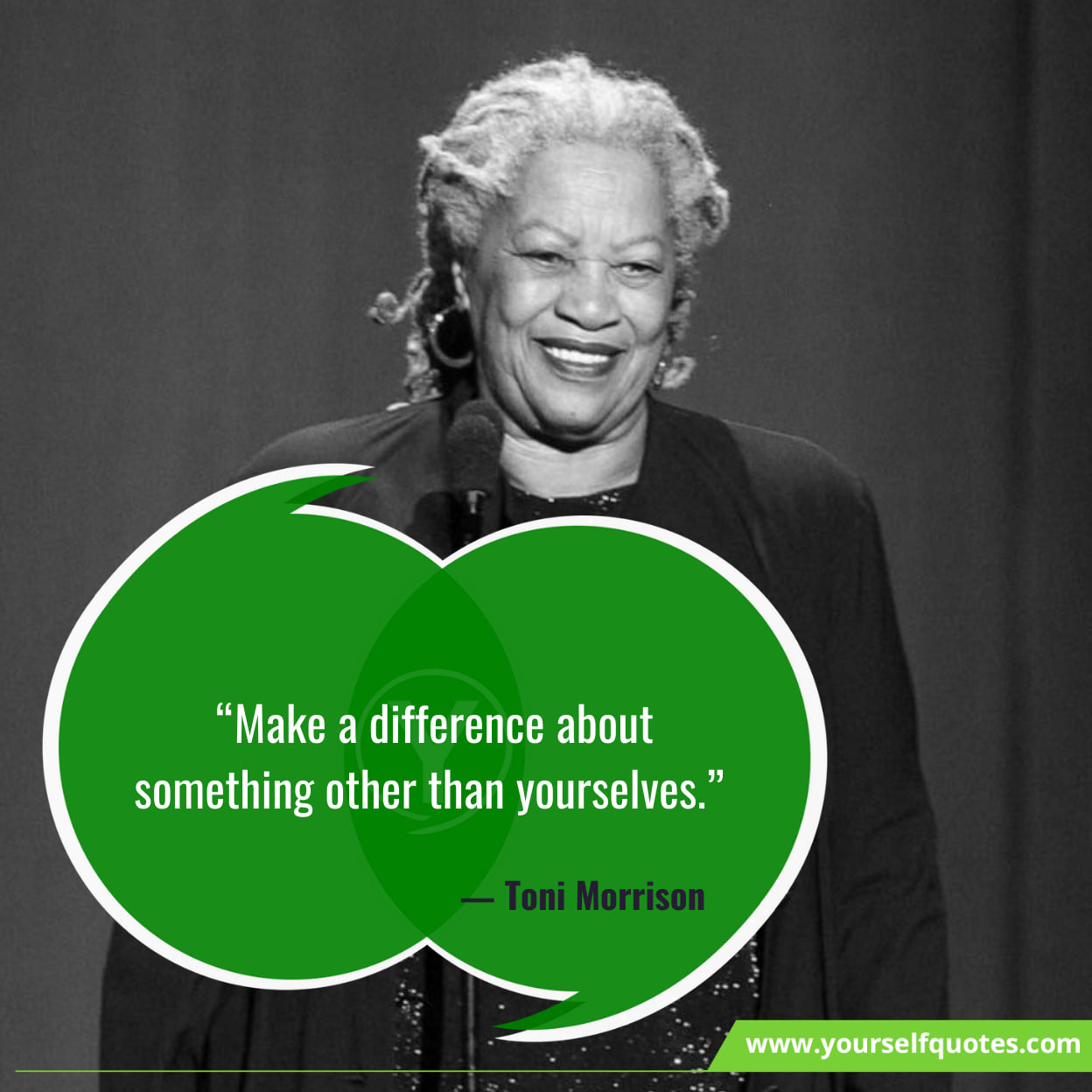 “Racists always try to make you think they are the majority, but they never are. It’s always the minority against all of the poor, all of the women, or all of the blacks.” ― Toni Morrison

“We never shape the world… the world shapes us.” ― Toni Morrison

“You’re turning over your whole life to him. Your whole life, girl. And if it means so little to you that you can just give it away, hand it to him, then why should it mean any more to him? He can’t value you more than you value yourself.” ― Toni Morrison

“You don’t have to love me but you damn well have to respect me.” ― Toni Morrison

“There is a loneliness that can be rocked. Arms crossed, knees drawn up, holding, holding on, this motion, unlike a ship’s, smooths and contains the rocker. It’s an inside kind–wrapped tight like skin.” ― Toni Morrison

“A writer’s life and work are not a gift to mankind; they are its necessity.” ― Toni Morrison

“Let me tell you something. A man ain’t a goddamn ax. Chopping, hacking, busting every god damn minute of the day. Things get to him. Things he can’t chop down because they’re inside.” ― Toni Morrison

“A good man is a good thing, but there is nothing in the world better than a good woman. She can be your mother, your wife, your girlfriend, your sister, or somebody you work next to. Don’t matter. You find one, stay there. You see a scary one, make tracks.” ― Toni Morrison

“If there’s a book that you want to read, but it hasn’t been written yet, then you must write it.” ― Toni Morrison

“Something that is loved is never lost.” ― Toni Morrison 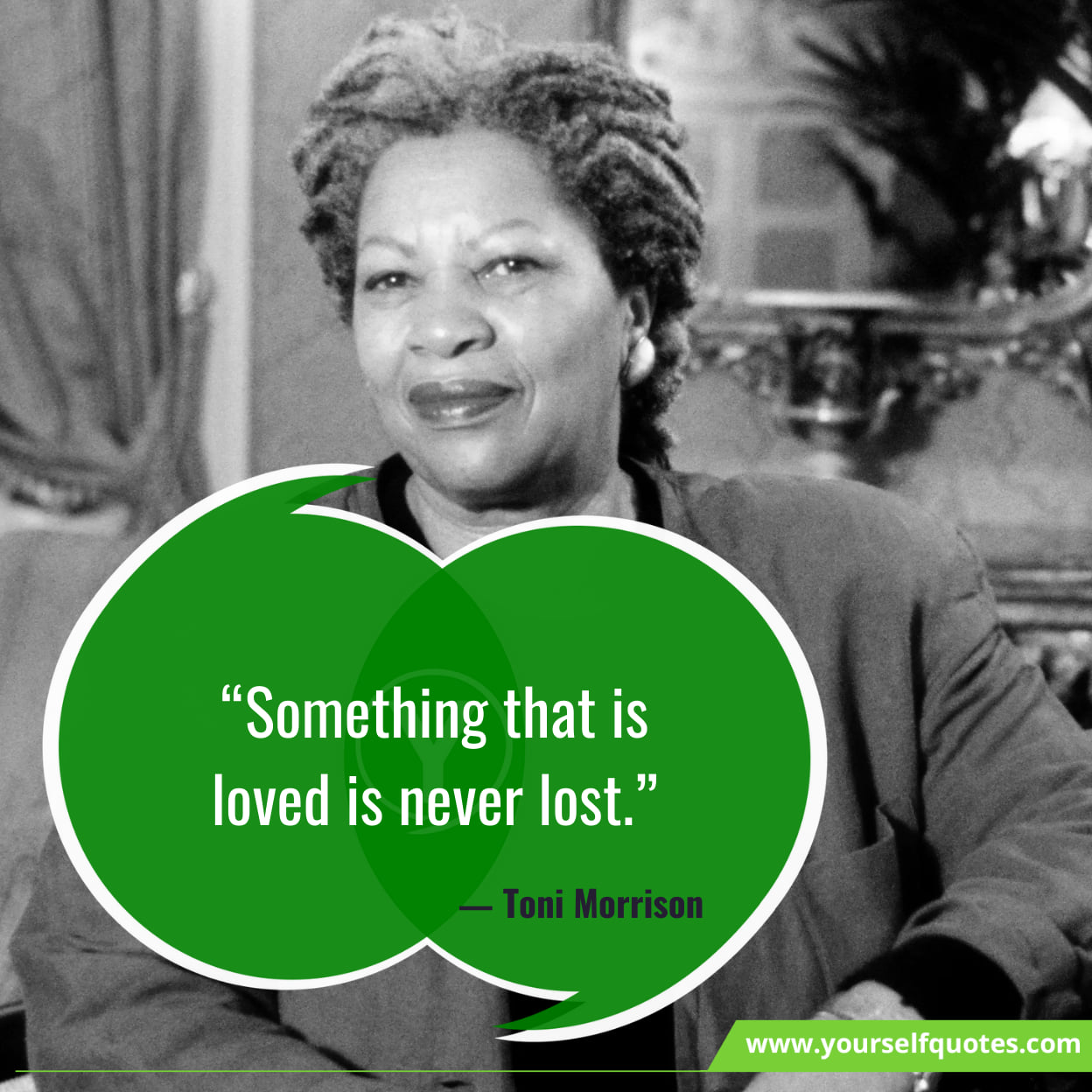 “I dream a dream that dreams back at me.” ― Toni Morrison

“They encouraged you to put some of your weight in their hands and soon as you felt how light and lovely it was, they studied your scars and tribulations.” ― Toni Morrison

“What I think the political correctness debate is really about is the power to be able to define. The definers want the power to name. And the defined are now taking that power away from them.” ― Toni Morrison

“Writing is really a way of thinking–not just feeling but thinking about things that are disparate, unresolved, mysterious, problematic or just sweet.” ― Toni Morrison

“Let me tell you something. A man ain’t a god-damn axe. Chopping, hacking, busting every god damn minute of the day. Things get to him. Things he can’t chop down because they’re inside.” ― Toni Morrison

“Beauty was not simply something to behold; it was something one could do.” ― Toni Morrison

“She learned the intricacy of loneliness: the horror of colour, the roar of soundlessness and the menace of familiar objects lying still.” ― Toni Morrison

“Lonely was much better than alone.” ― Toni Morrison 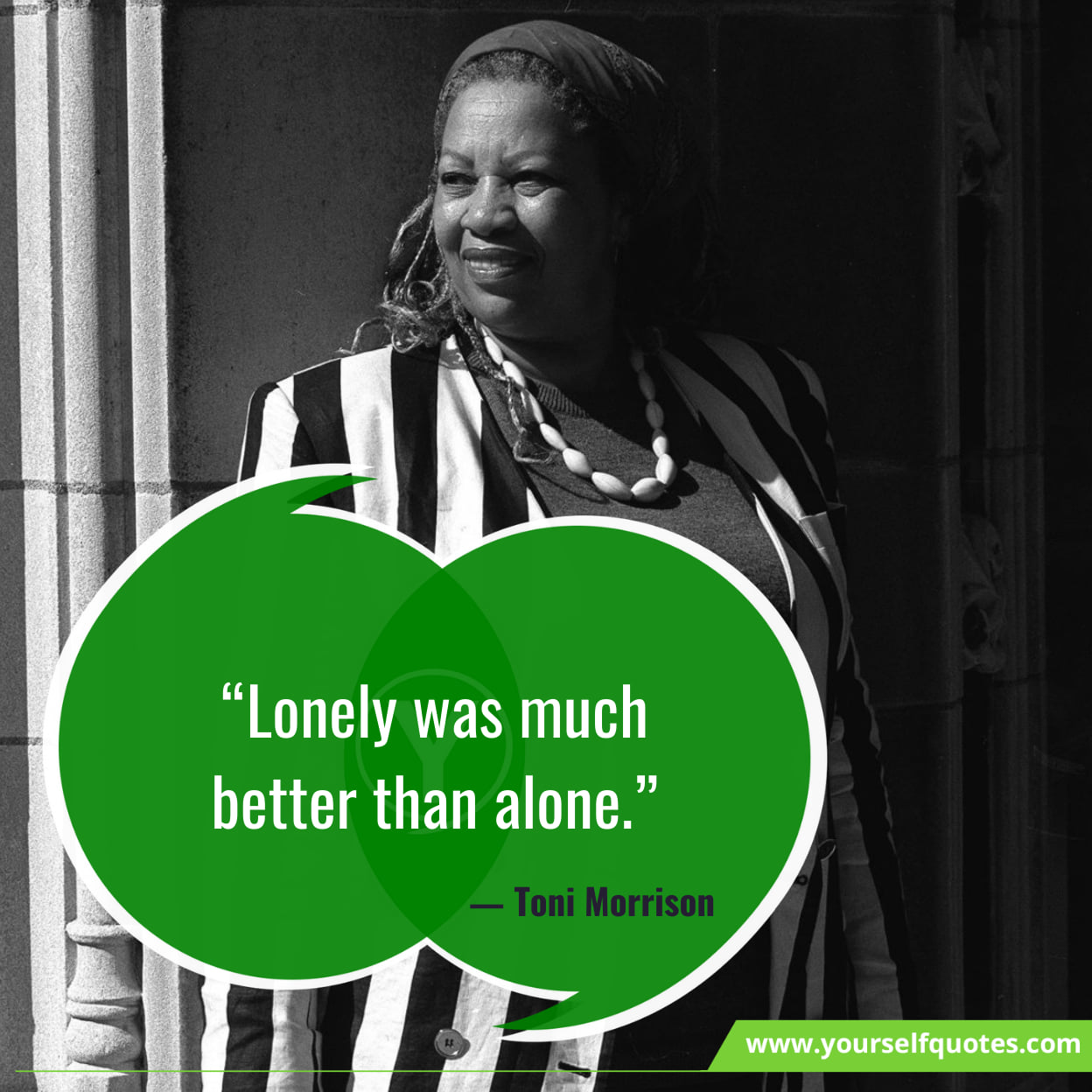 “Me and you, we got more yesterday than anybody. We need some kind of tomorrow.” ― Toni Morrison

“All paradises, all utopias, are designed by who is not there, by the people who are not allowed in.” ― Toni Morrison

“If they put an iron circle around your neck I will bite it away.” ― Toni Morrison

“Pain. I seem to have an affection, a kind of sweet tooth for it. Bolts of lightning, little rivulets of thunder. And I the eye of the storm.” ― Toni Morrison

“A dream is just a nightmare with lipstick.” ― Toni Morrison

“She is a friend of mind. She gather me, man. The pieces I am, she gather them and give them back to me in all the right order. It’s good, you know, when you got a woman who is a friend of your mind.” ― Toni Morrison

“Anger is better. There is a sense of being in anger. A reality and presence. An awareness of worth. It is a lovely surging.” ― Toni Morrison

“All water has a perfect memory and is forever trying to get back to where it was.” ― Toni Morrison

“As you enter positions of trust and power, dream a little before you think.” ― Toni Morrison

“The function of freedom is to free someone else.” ― Toni Morrison

“If you surrendered to the air, you could ride it.” ― Toni Morrison

“There is really nothing more to say except why. But since why is difficult to handle, one must take refuge in how.” ― Toni Morrison

“A sister can be seen as someone who is both ourselves and very much not ourselves – a special kind of double.” ― Toni Morrison

“It is sheer good fortune to miss somebody long before they leave you.” ― Toni Morrison

“He wants to put his story next to hers.” ― Toni Morrison

“It was a fine cry – loud and long – but it had no bottom and it had no top, just circles and circles of sorrow.” ― Toni Morrison

“Anything dead coming back to life hurts.” ― Toni Morrison

“Like any artist without an art form, she became dangerous.” ― Toni Morrison 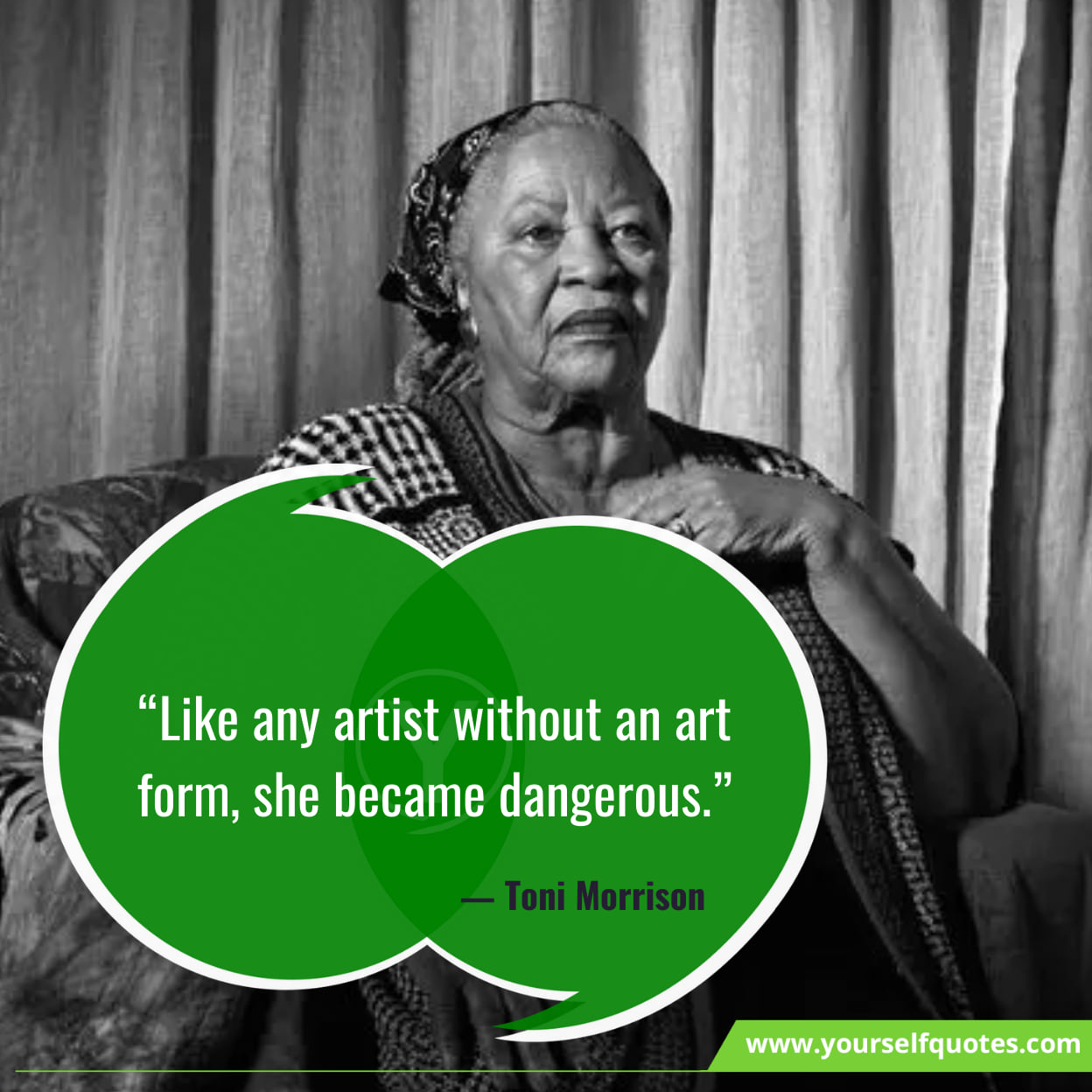 Toni Morrison is a famous and renowned award-winning American novelist. Apart from being a notable novelist, she was an editor and a great professor. Her interest in writing was motivated and recognized by her parents. She completed her graduation from the University of Howard to pursue her passion for literature. Later she started her career as a professor of English at Howard for the next seven years.

Her writings and books were very impressive and expressive in describing Black America. She was honored with various laurels including the most notable Noble Prize and Pulitzer Prize. The great lady took her last breath on 5th August 2019.

Toni Morrison was a great lady and most people are inspired by her writings. So share these amazing Toni Morrison Quotes Images with your family, friends, and loved ones.

Which are your favorite Toni Morrison Quotes? Leave a comment below.