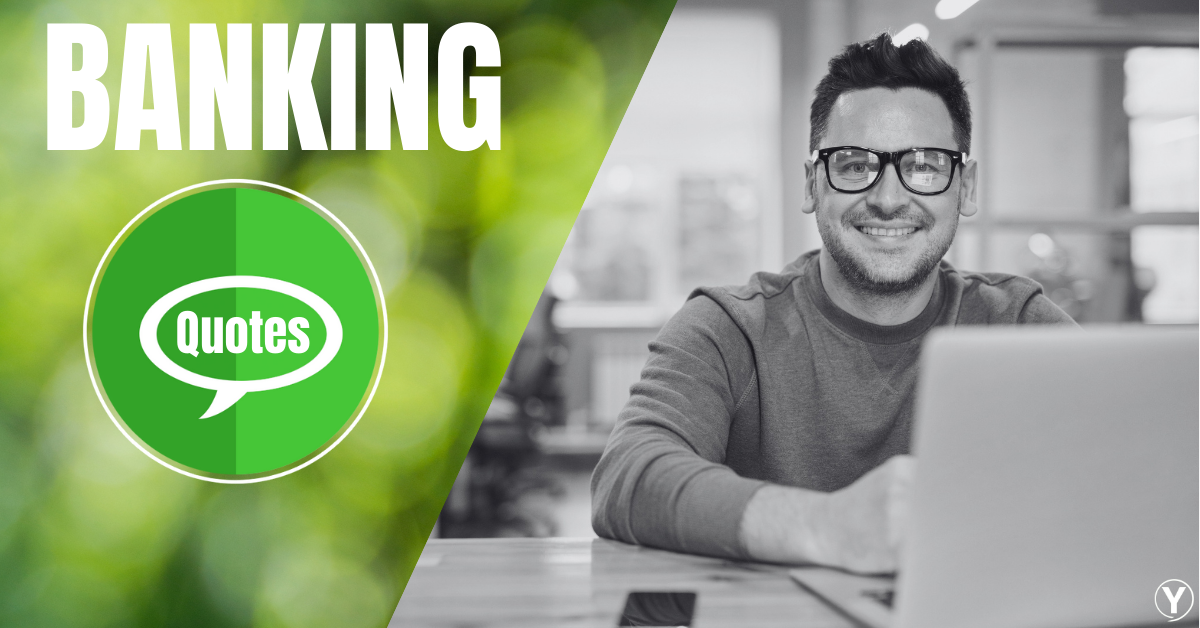 Banking is delightful. Not only does it gives the Impulse to Capitalism such as Credit. History is consistent as every field came after the Banks. Talking about the Railways, Automobiles, Telephones, Airways, Companies, and Technology firms. Banks are the roots of every setup which can be owned by one.

That is the reason people have a keen interest in how the banks are operating currently, it’s the continuous revolution in Technology, and the changing era that leads to the generation of the Interest of the people in Banks.

So the quotes are made on the Banking for the people to enhance the interest of the people and the quote which each and every banker should be aware of are written as follows. The Bankers or the aspirants can read the quotes to gain more.

“In banking or finance, trust is the only thing you have to sell.” ― Patrick Dixon 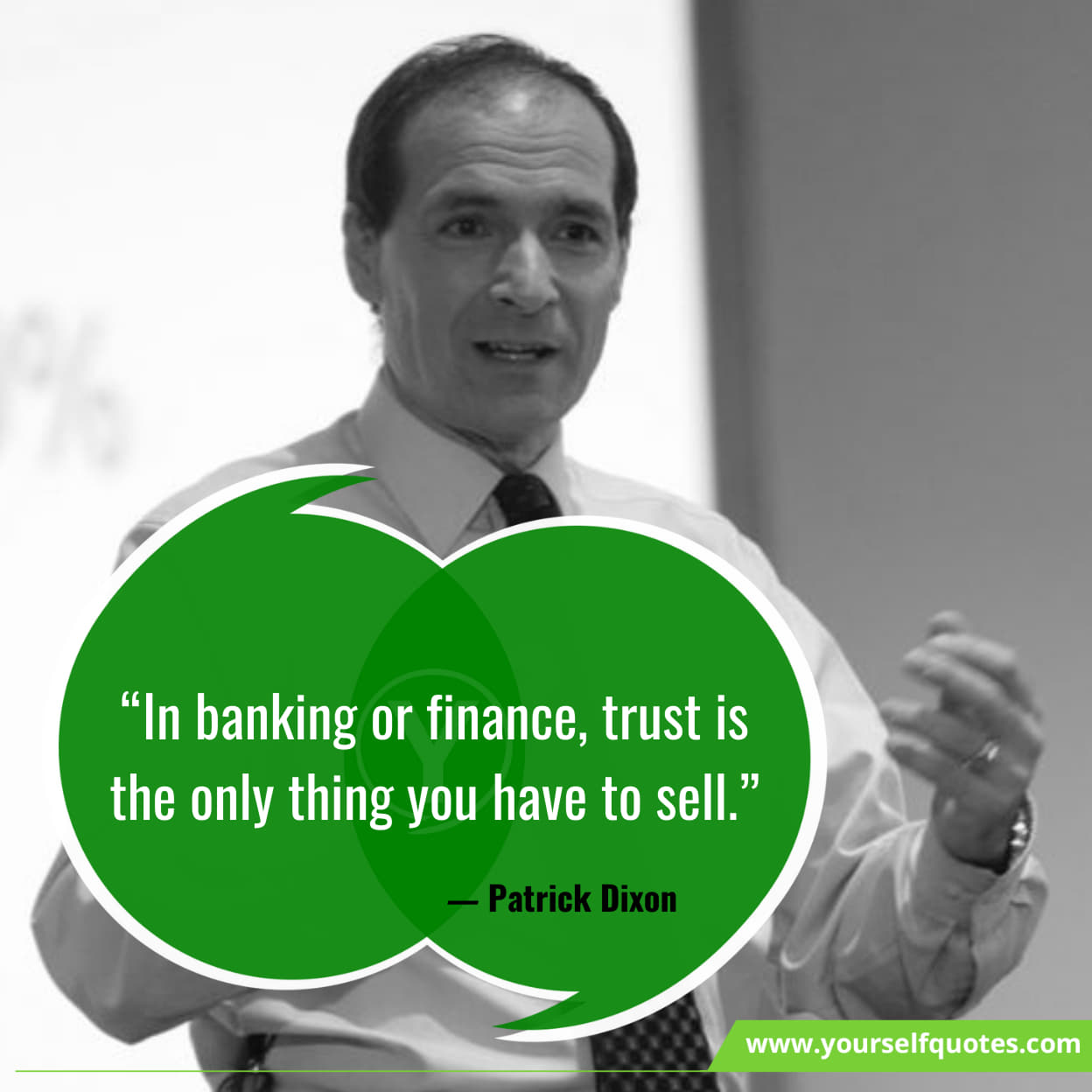 “Banking is necessary, Banks are Not.” ― Bill Gates

“A banking system is the most important and integral part of the economy for any country.”

“Good Banking is produced not by good laws, but by good bankers.” ― Hartley Withers

“Banking, I would argue, is the most heavily regulated industry in the world.”

“Banking is a branch of the information business.” ― Walter Wriston

“A bank is a place that will lend you money if you can prove that you don’t need it.” ― Bob Hope

“At its core, banking is not simply about profit, but about personal relationships.” ― Felix Rohatyn

“Banking technology has made it simple and efficient to invest in good causes.”

“In banking or finance trust is the only thing you have to sell.” ― Patrick Dixon

“Consumer banking – selling the debt to middle-class families – has been a gold mine.”

“If banks cannot truly be customer intimate, they are doomed to be just dumb commodities, acting behind the scenes, like utilities.” ― Jp Nicols

“Business and life are like a bank account you can’t take out more than you put in.” 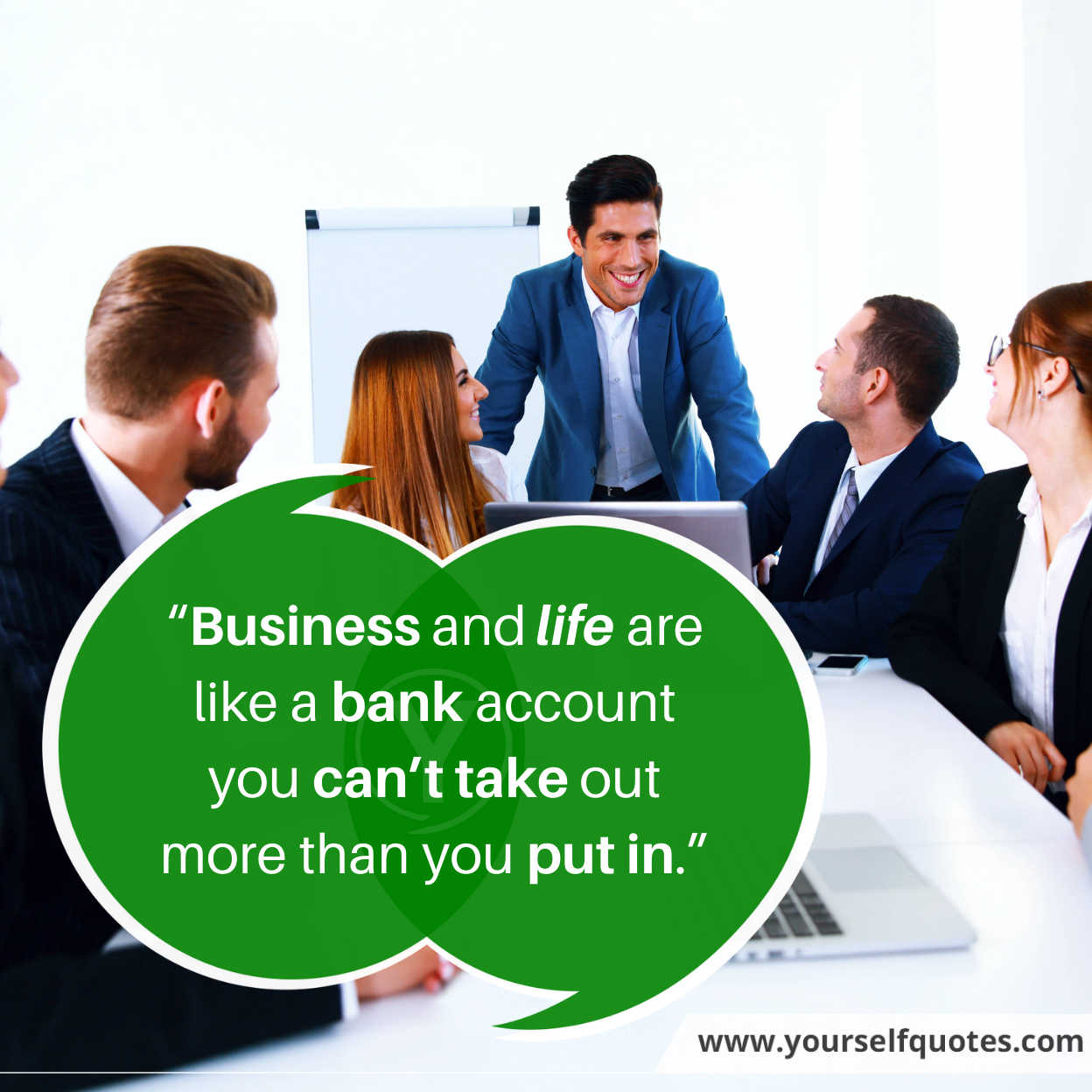 “Banking was conceived in iniquity and born in sin.”

“Investment banking is not a business; it is a personal service where bankers work hand in hand with

their clients. And it is a service that must not simply be about making bigger and bigger deals that reap rewards for only a small group of executives.”

“I can’t imagine trying to operate a company banking on the fact that my logo is cooler than somebody else’s logo.”

“At the heart of banking is a suicidal strategy. Banks take money from the public or each other on call, skim it for their own reward and then lock the rest up in volatile, insecure, and illiquid loans that at times they cannot redeem without public aid.”

“Banking may well be a career from which no man really recovers.”

“Let’s be honest: the trappings of investment banking are quite tempting. I do miss it sometimes. And to be honest, there was a time I’d read the ‘WSJ’ in the morning, and for years I have done that.”

“People with banking experience haven’t all flocked to the biggest banks; community banks and regional banks, along with smaller trading houses and credit unions, have some very talented people.”

“No country can truly develop if half its population is left behind.” ― Justing Greening

“My fantasy is to break up the big banks. I wish we would end ‘too big to fail’ in our banking system.” ― Kenneth C. Griffin

“The only good loan is one that gets paid back.” ― Robert Wilmers

“At its core, banking is not simply about profit, but about personal relationships.” ― Felix Rohatyn

“Everything predicted by the enemies of banks, in the beginning, is now coming to pass.” ― Thomas Jefferson 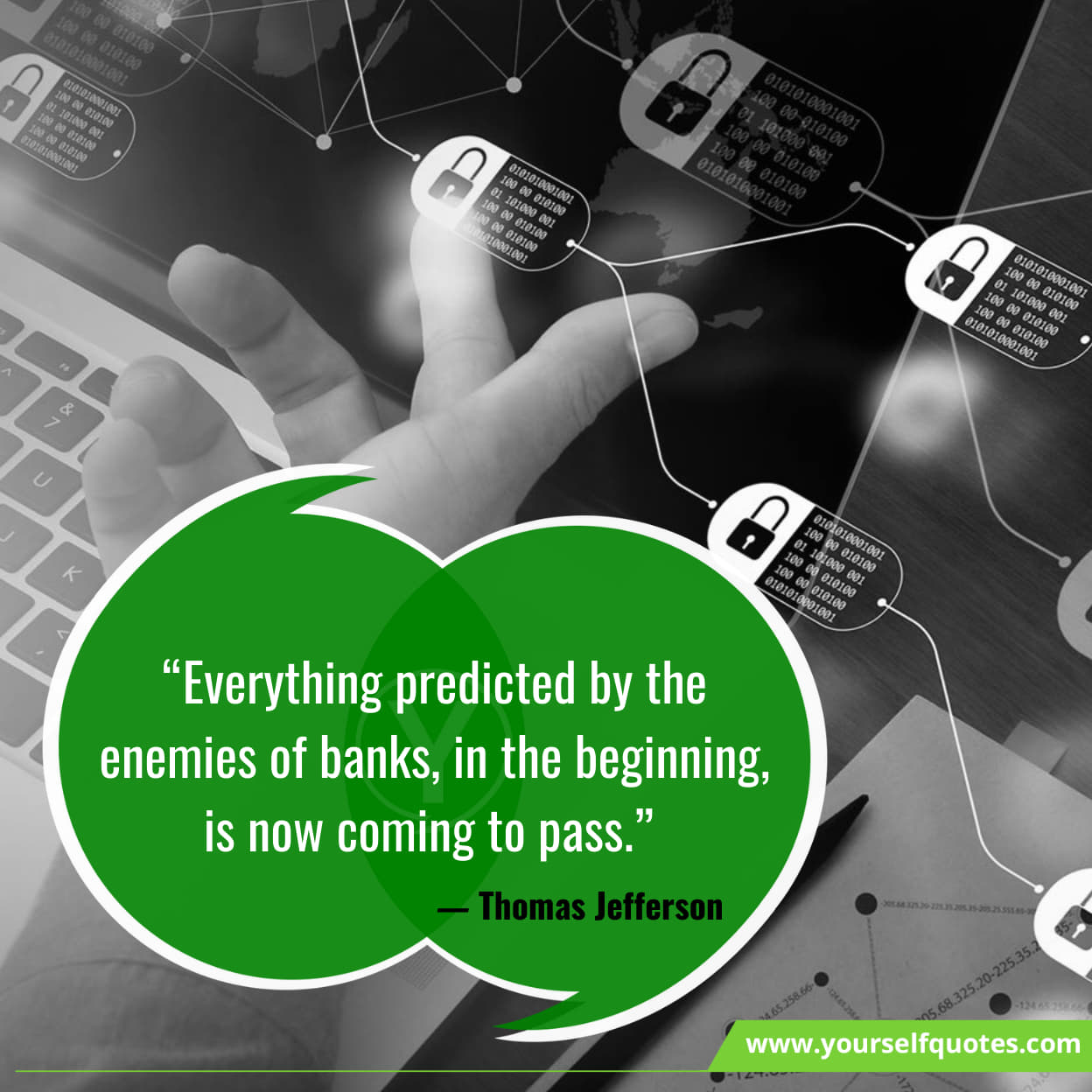 “If the American people ever allow private banks to control the issue of their currency.” ― Thomas Jefferson

“The art and mystery of banks… is established on the principle that ‘private debts are a public blessing.” ― Thomas Jefferson

“The issuing power of currency shall be taken from the banks and restored to the people, to whom it properly belongs.” ― Thomas Jefferson

“I own it to be my opinion, that goodwill arises from the destruction of our credit.” ― Thomas Jefferson

“The Bank of the United States is one of the most deadly hostilities existing, against the principles and form of our Constitution.” ― Thomas Jefferson

“Our public credit is good, but the abundance of paper has produced a spirit of gambling in the funds.” ― Thomas Jefferson

“Banking is very good business if you don’t do anything dumb.” ― Warren Buffett 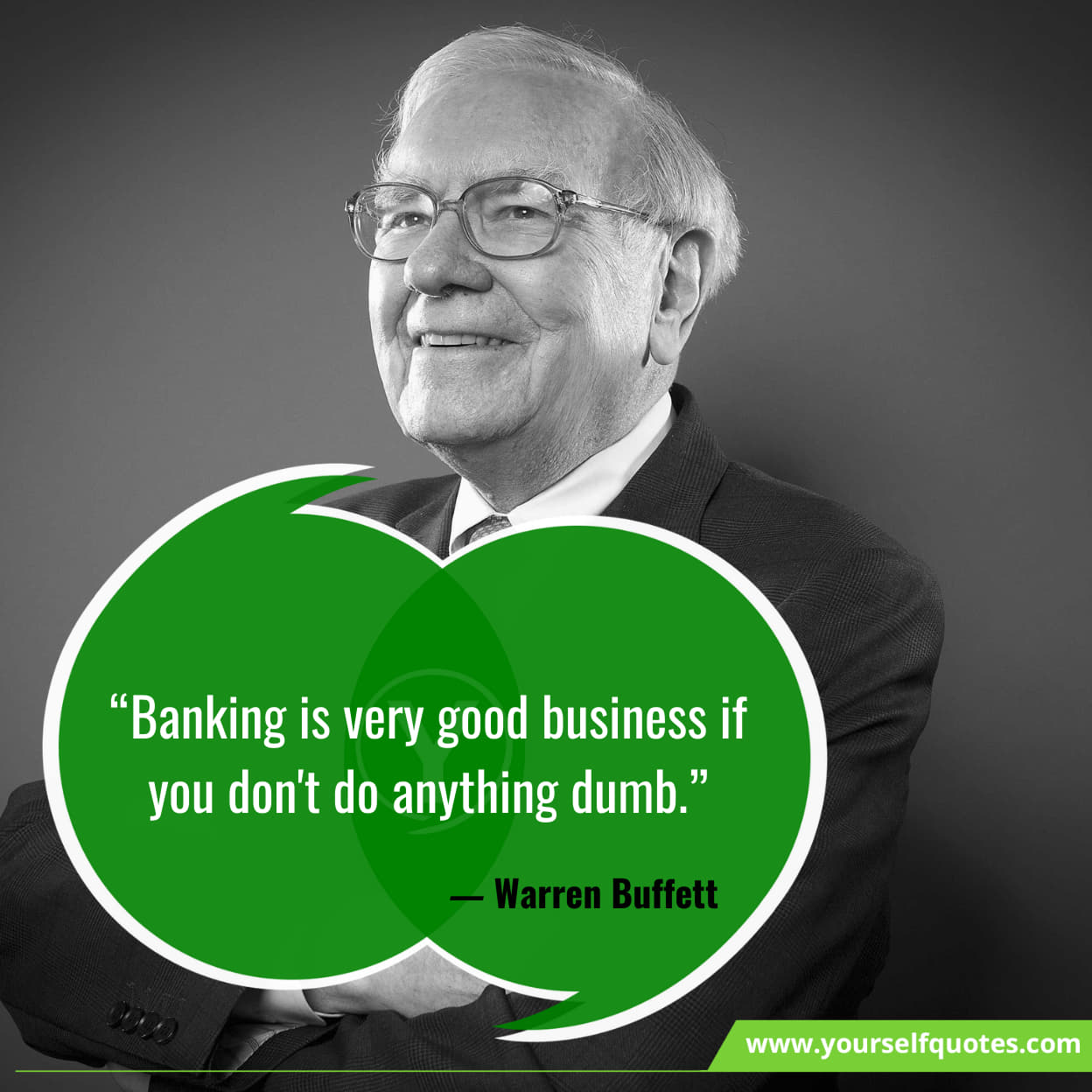 “The financial industry is a service industry. It should serve others before it serves itself.” ― Christine Lagarde

“Our financial markets work best when they are competitive, fair, and transparent.” ― Kenneth C. Griffin

“It’s a real pleasure to earn the trust of your customers slowly over time by doing what’s right.” ― Charlie Munger

“Happiness: a good bank account, a good cook, and a good digestion.”

“The modern banking system manufactures money out of nothing.” ― Josiah Stamp

“You don’t run a business hoping you don’t have a recession.” ― Jamie Dimon

“When I moved from corporate to consumer banking, I brought a lot of synergy with me.”

“The longer I go on, the more I am aware of the power of finance.” ― Justin Welby

“Banking is a branch of the information business.” ― Walter Wriston 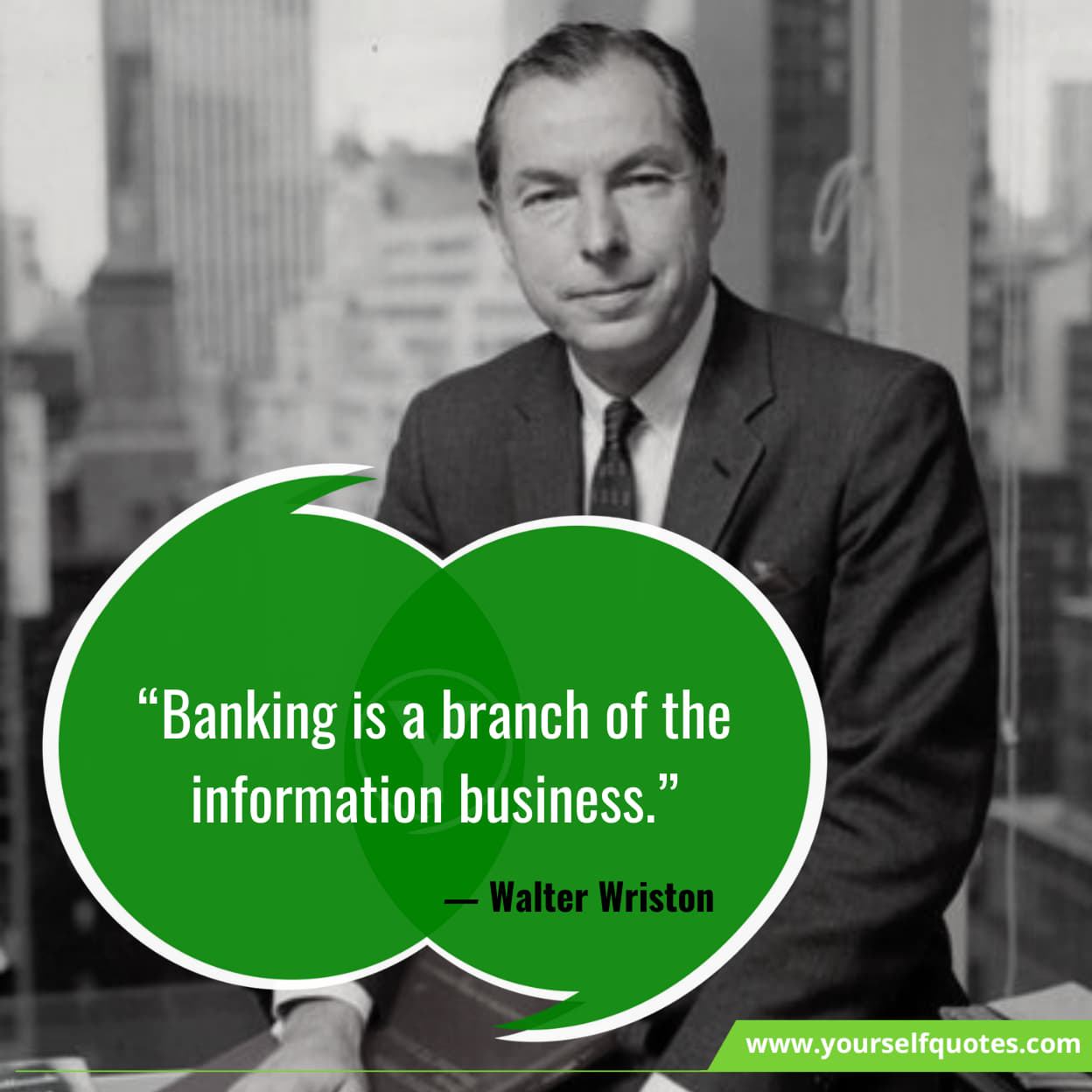 “When we look at the history of banking, the banking industry has often been the first industry to use new technology.”

“Good bankers, like good tea, can only be appreciated when they are in hot water.” ― Jaffar Hussein

“It’s all about the experience, either bank remove friction or someone else will.” ― Brett King

“Complexity and interconnectedness matter as much as size in assessing risk in banking.” ― Henry Paulson

“The inescapable truth in that there are just too many banks in this country chasing too few customers.” ― Dick Rosenberg

“The goal is not only to earn high returns to the top of the cycle but also to avoid giving them back at the bottom.” ― Duff McDonald

“A banking system is the most important and integral part of the economy for any country.”

“If you are afraid to fail, then you should go and become a banker.” ― Yossi Vardi

“Beware of little expenses; a small leak will sink a great ship.”

“I believe that through knowledge and discipline, financial peace is possible for all of us.” ― Dave Ramsey

“It is well enough that the people of the nation do not understand our banking and monetary system, for if they did, I believe there would be a revolution before tomorrow morning.” ― Henry Ford

“The key to the performance of any traditional commercial bank…is the profitability of the loans it makes.” ― Robert Wilmers

“A healthy banking system is one of the vital parts of a nation’s foundation.” ― Hendrith Smith 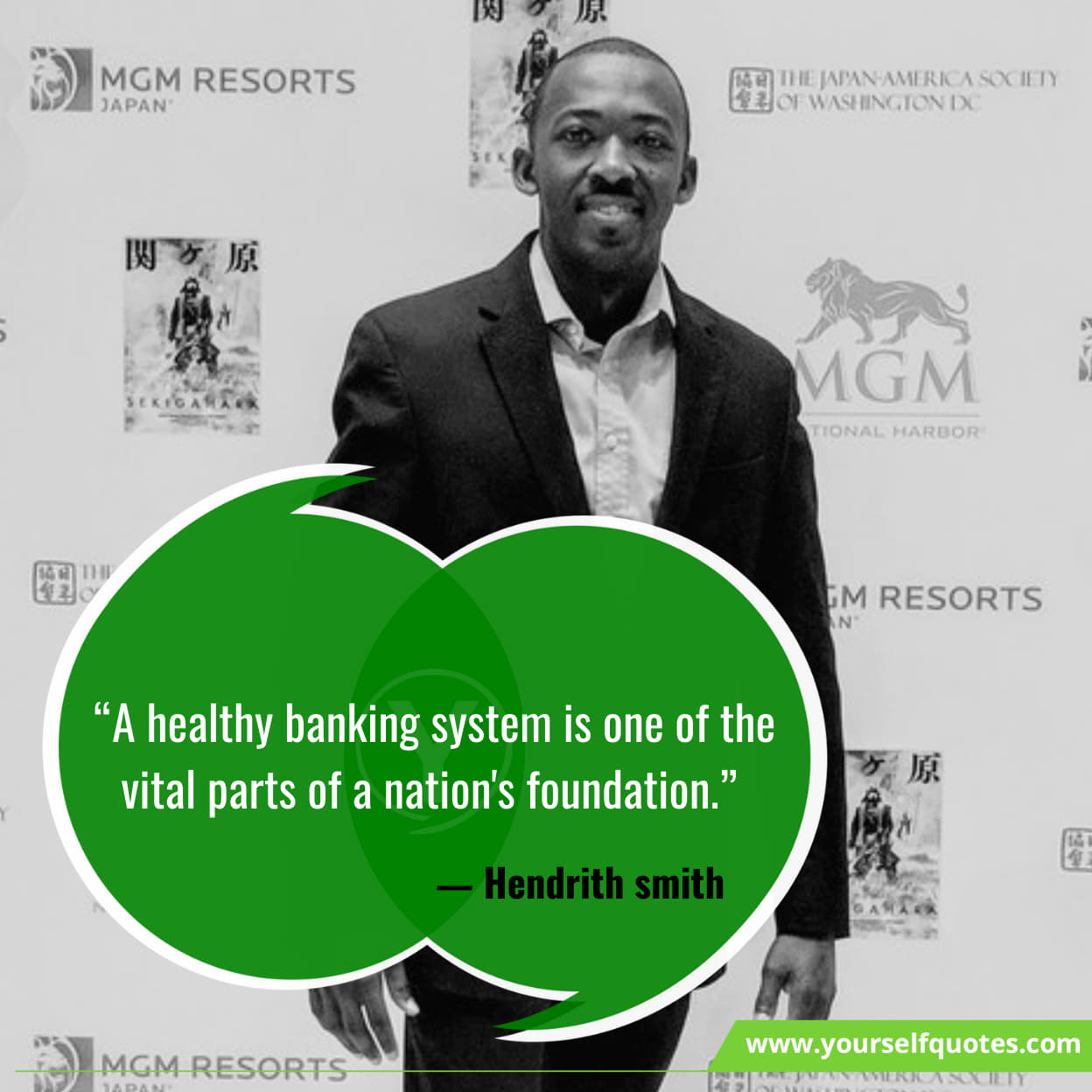 “Bankers know that history is inflationary and that money is the last thing a wise man will hoard.” ― Will Durant

“Regulation is necessary, particularly in a sector, like the banking sector, which exposes countries and people to a risk.” ― Christine Lagarde

“Stay on top of your finances. Don’t leave that up to others.” ― Leif Garrett

“The only way you will ever permanently take control of your financial life is to dig deep and fix the root problem.”

“Do you know the only thing that gives me pleasure? It’s to see my dividends coming in.” ― John D. Rockefeller

“Money looks better in the bank than on your feet.”

“If nature were a bank, they would have already rescued it.”

“Banking system is a continuous process for any country, which shows the firmness of the country’s economy.”

“The trade of banks is the buying and selling of interest and exchange.” ― William Petty

“Money is the best rule of commerce.” ― William Petty

“Money is a terrible master but an excellent servant.”

The above-mentioned quotes are being selected out for the people to which one Banker or the aspirants of the Bank should be known.

The quotes reveal the truth but in a different way which can be understood by each one and implemented to life. The Quote for the Banking consists of both the positive and the negative aspects but it depends on the person oneself what he wants to grab the positive side of the quote or the Negative one.

As no one can change the thinking of the person but quotes can make it widen and find out the best in each. As Bank is the Institution you can’t imagine the World can get the evaluation for assets and reflect the Country’s economy.

Men’s Day Wishes, Messages, and Quotes for the Beloved Man in your Life