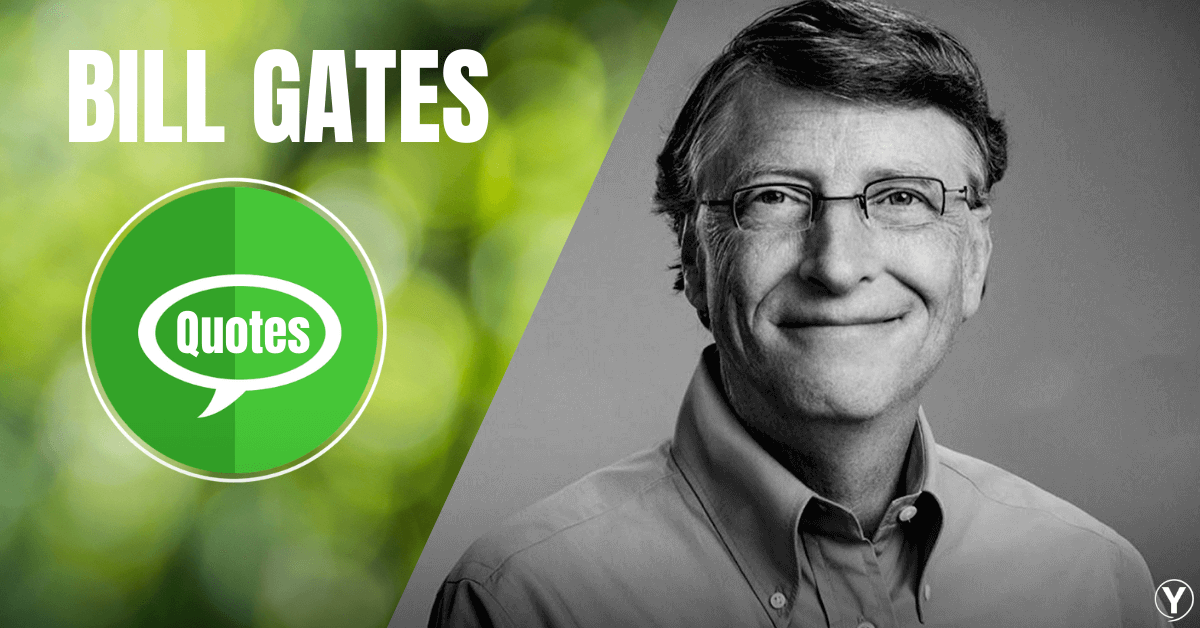 The wise words said above are a window to showcase the true personality of Bill Gates, an American Business Magnate. He is well known & famous as the principal founder of Microsoft Corporation. Moreover, he was the only one who has given the highest amount of charity among the greatest philanthropists. Currently, he is the richest man in the world and was also included in the Forbes list of the World’s wealthiest people.

His father, Bill Gates Sr., was a lawyer, and his mother, Mary Maxwell Gates was an active board member of a non-profit organization and was very much engaged in business activities of the same. From a very young age, Bill Gates was much interested in the business world and had a keen interest in reading about it all the time. One question always revolved in his mind, “What would I end up eventually doing?”

Gates gathered a huge paper fortune as the company’s largest individual shareholder, on the huge success of Microsoft. In 1986, he became a billionaire, and within a decade he reached the tens of billions of dollars, tilting him into the world’s richest private individual.

In 1995 & 1996, he focused on the development of a Consumer & Enterprise Software solution for the Internet.

In addition to working, at Microsoft, he gave a huge helping hand at charitable work. He started the William H. Gates Foundation with his wife, Melinda in 1994 to fund global health programs, later renamed as Bill & Melinda Gates Foundation in 1999. Warren Buffet, in 2006 announced a big gift to the foundation that will allow its assets to total roughly $60 billion in the next 20 years.

At the beginning of the 21st century, the foundation continued with the aim of global health & global development, with an added focus on community and education causes in the United States.

In 2016, he was awarded the title Presidential Medal of Freedom. Currently, he is aging 63, and he is among the World’s richest men. 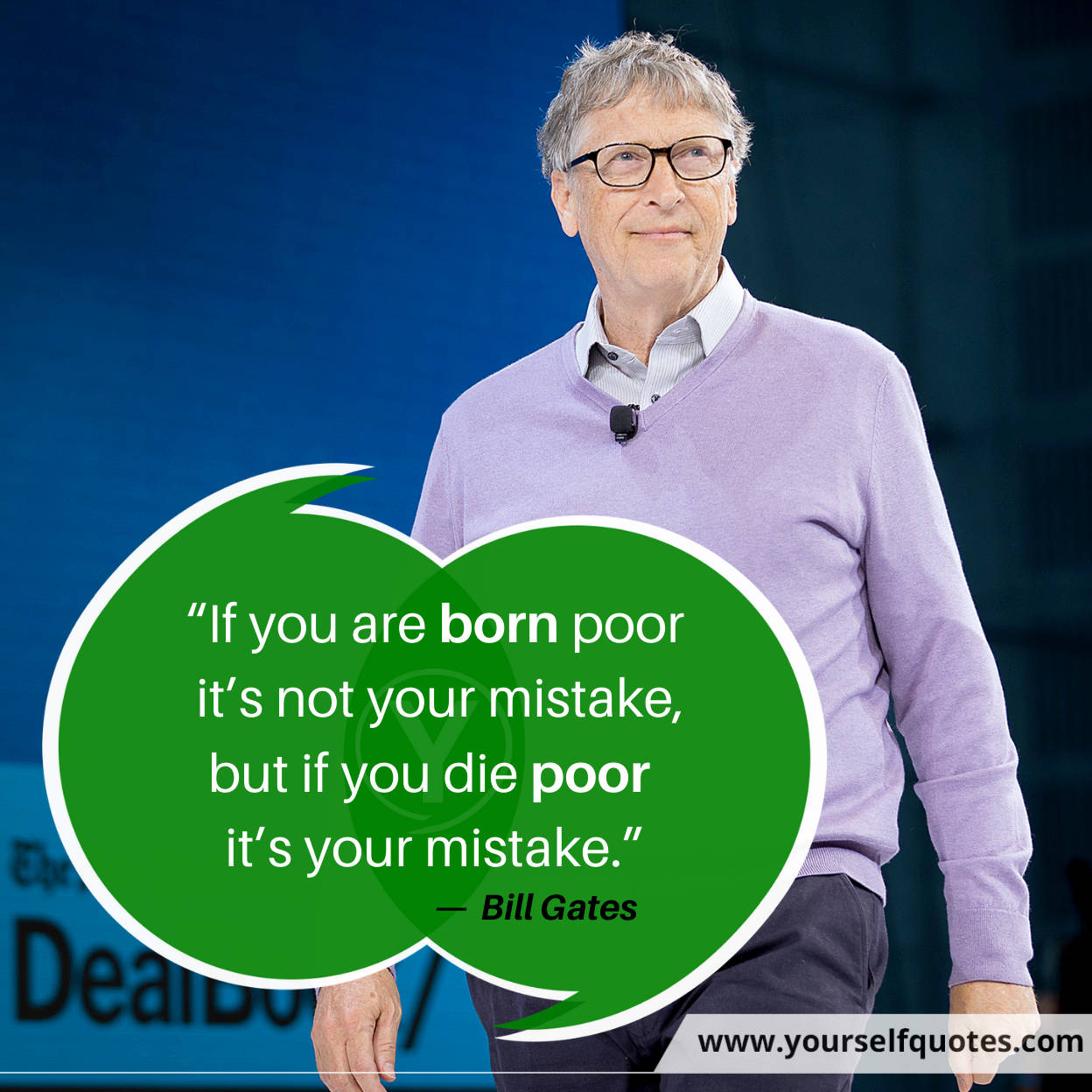 “If you were born poor it’s not your fault but if you die poor it’s your fault.” — Bill Gates 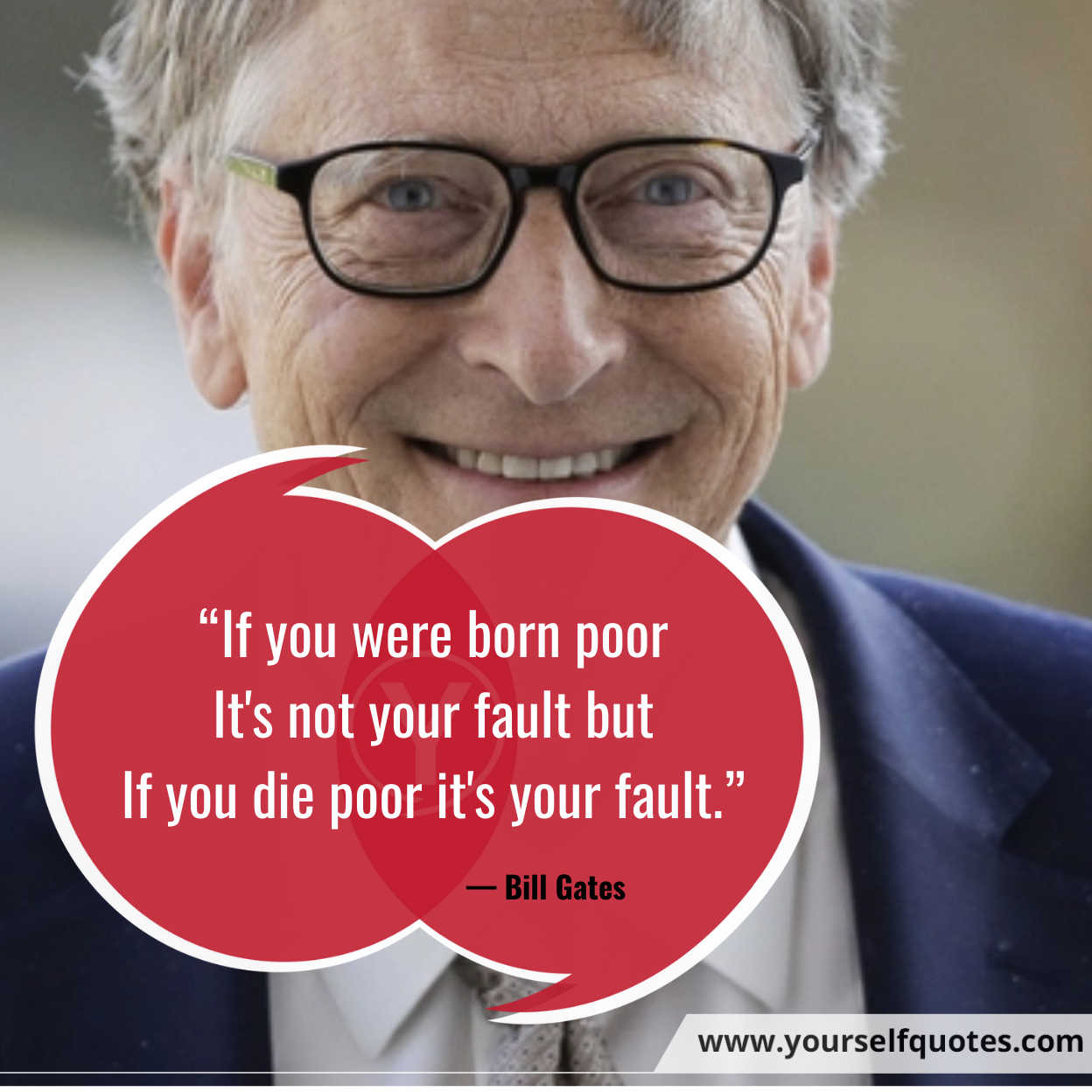 “Success is a lousy teacher. It seduces smart people into thinking they can’t lose.” – Bill Gates 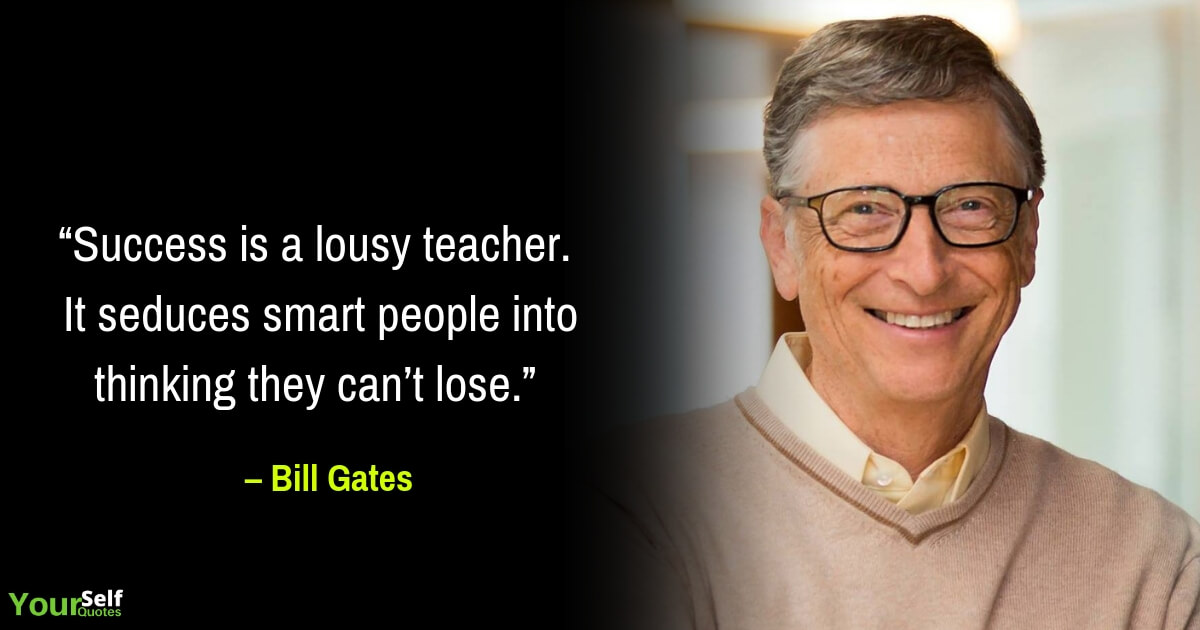 “I am not topper in my university but all toppers are working in my Microsoft company.” – Bill Gates 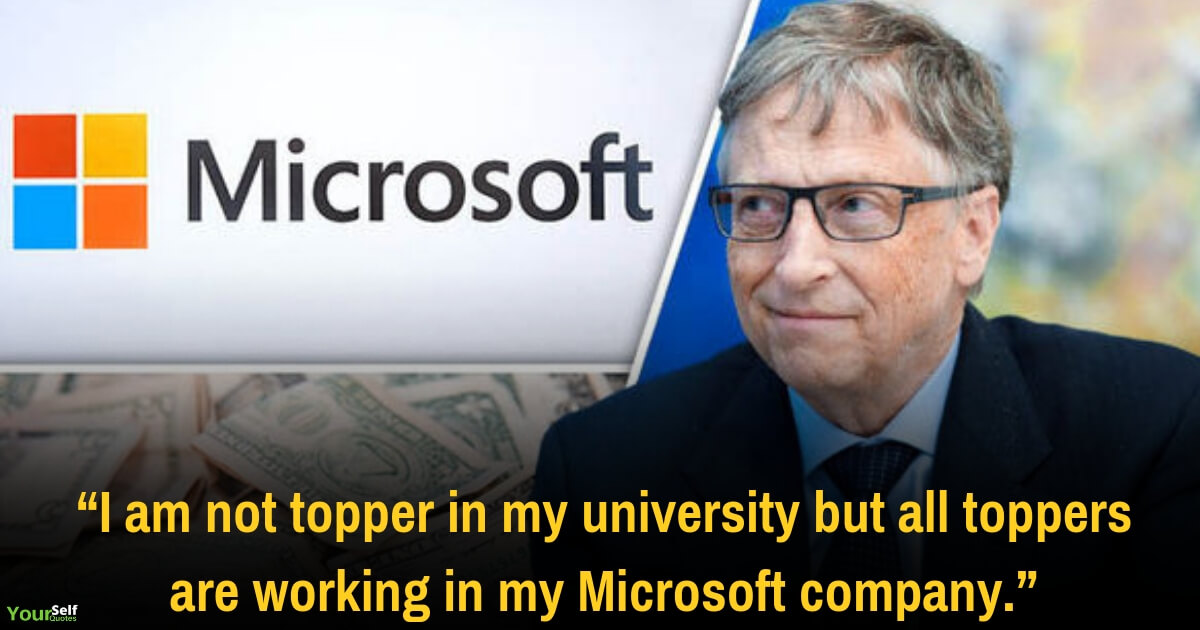 “Don’t compare yourself with anyone in this world…. If you do so, you are insulting yourself.” – Bill Gates 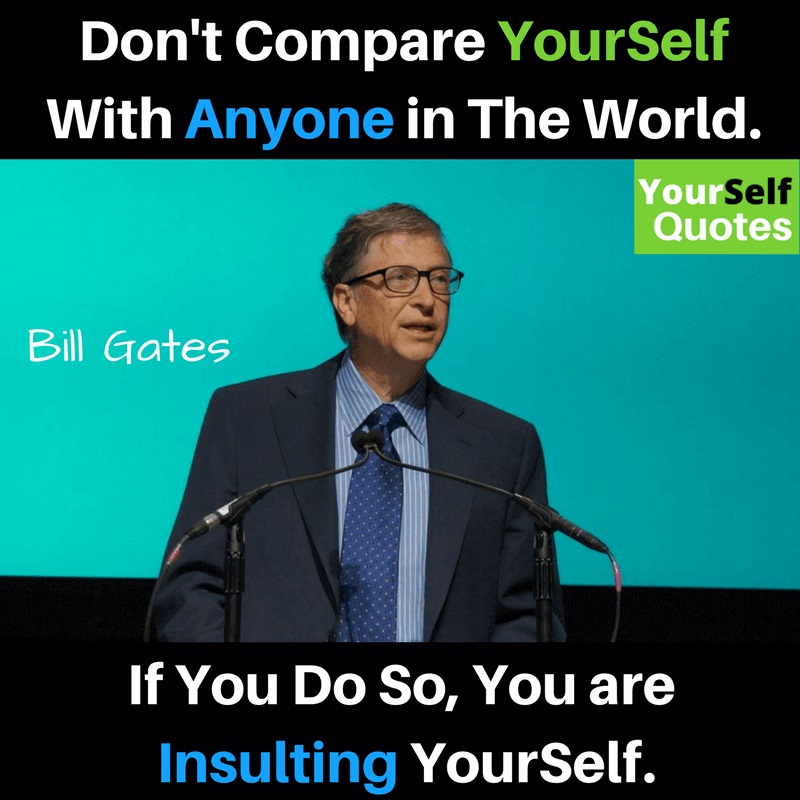 “Be nice to nerds. Chances are you’ll end up working for one.” – Bill Gates 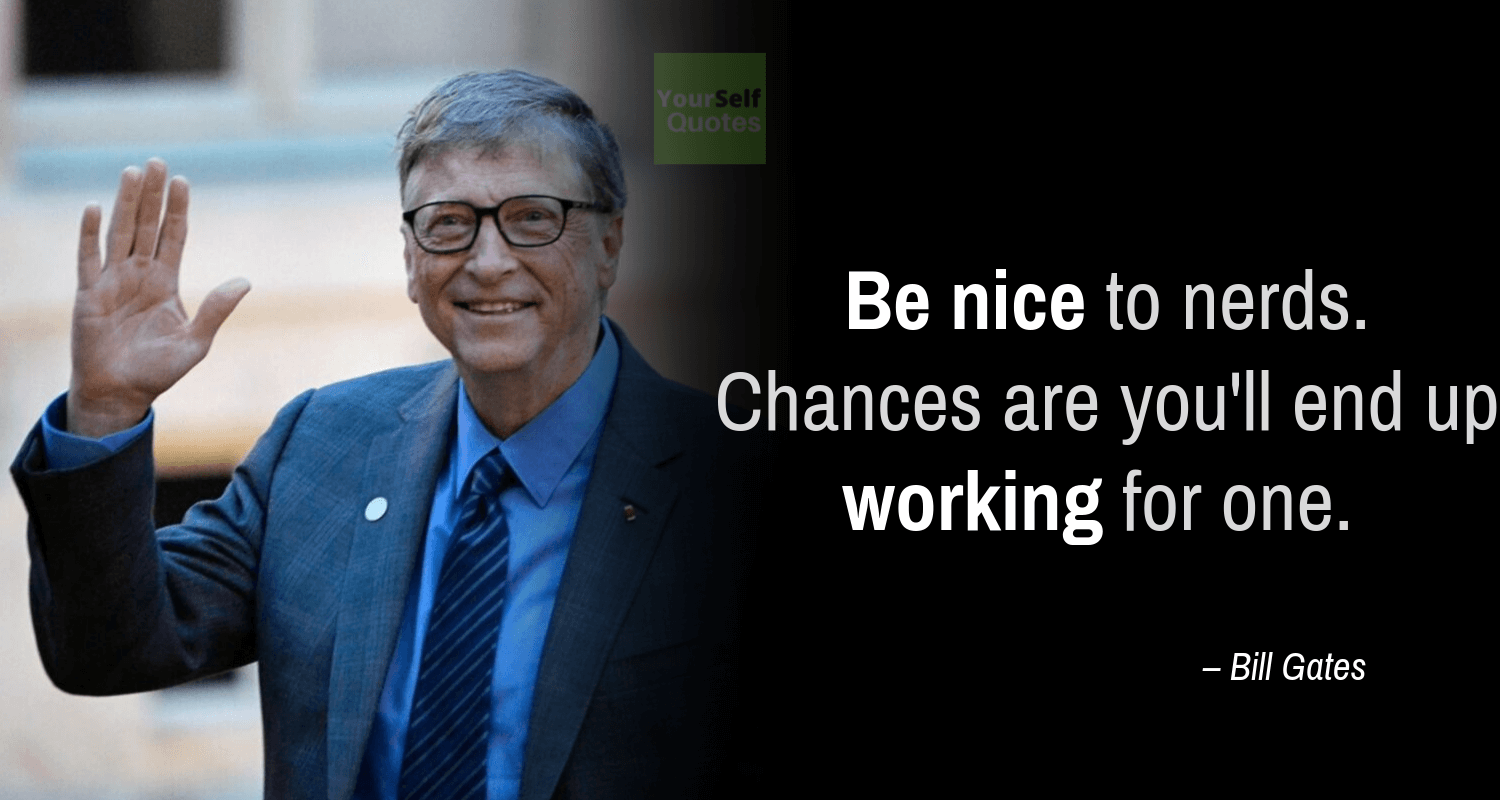 “Your most unhappy customers are your greatest source of learning.” – Bill Gates 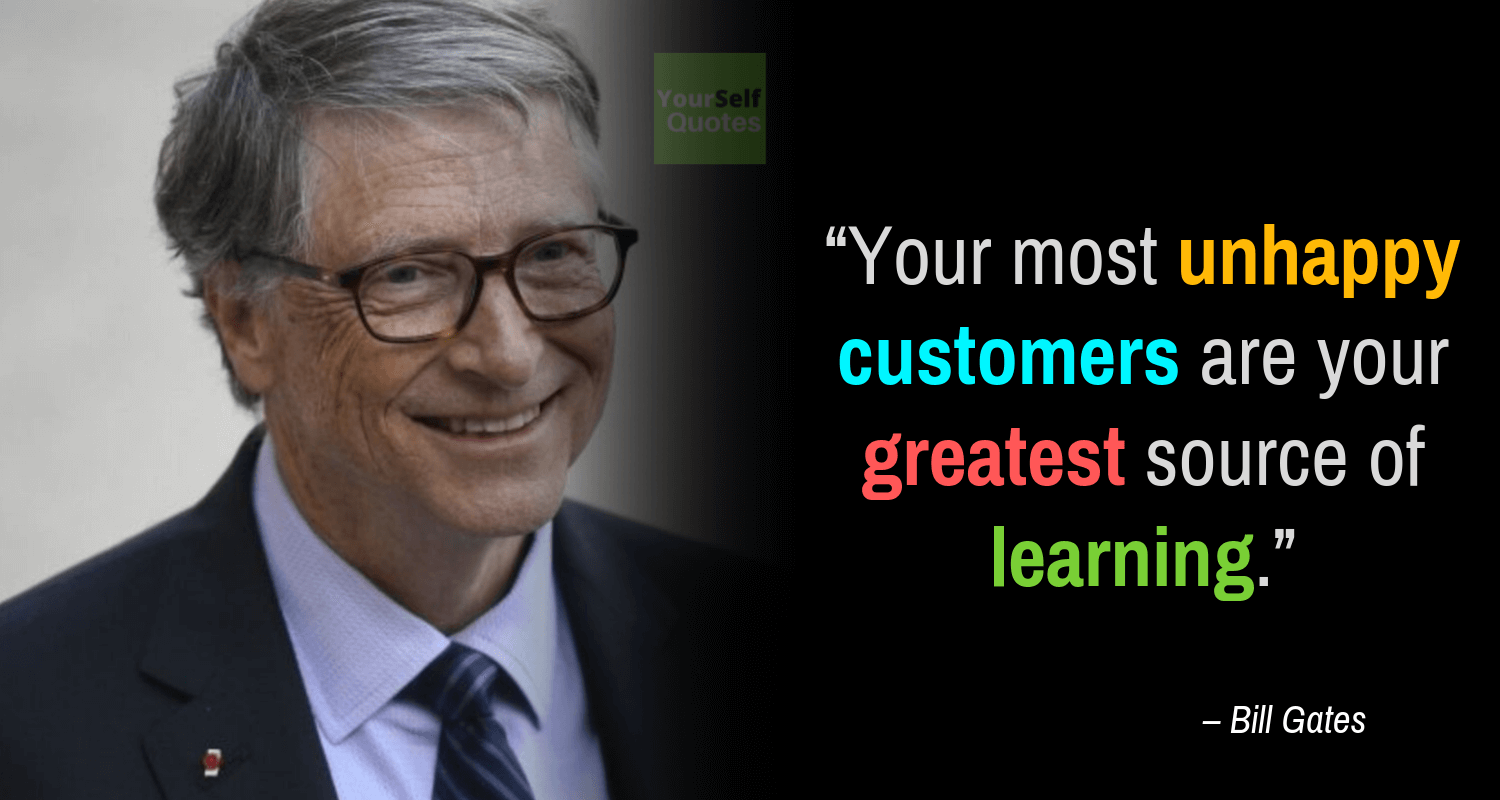 “We make the future sustainable when we invest in the poor, not when we insist on their suffering.” – Bill Gates 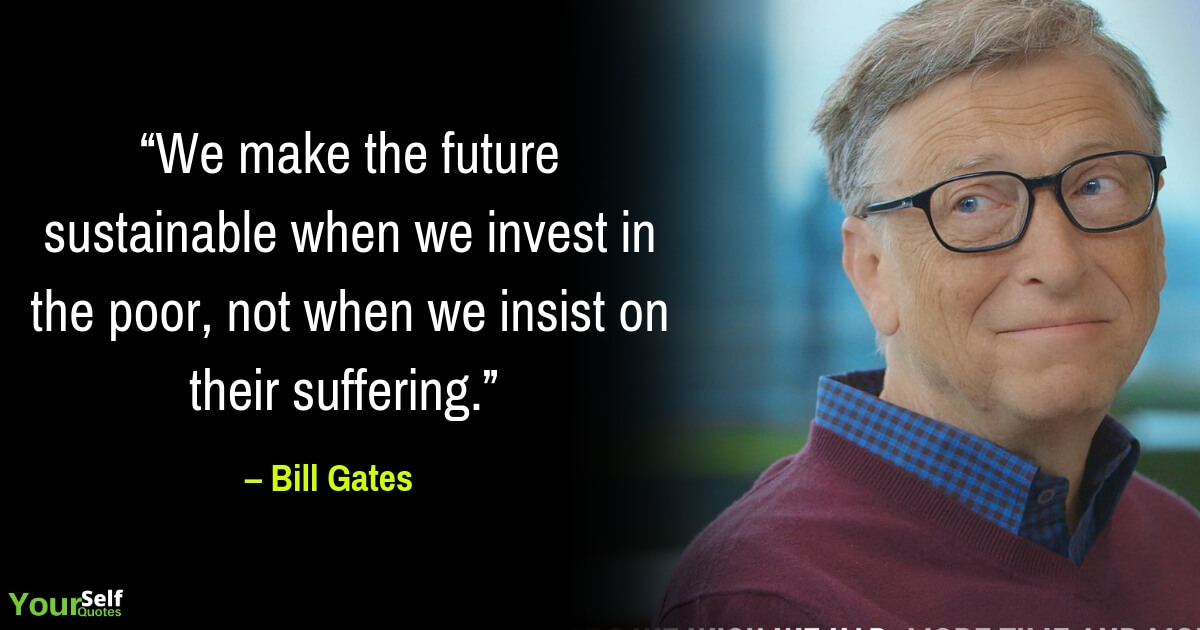 “It’s fine to celebrate success but it is more important to heed the lessons of failure.” – Bill Gates

“As we look ahead into the next century, leaders will be those who empower others.” – Bill Gates 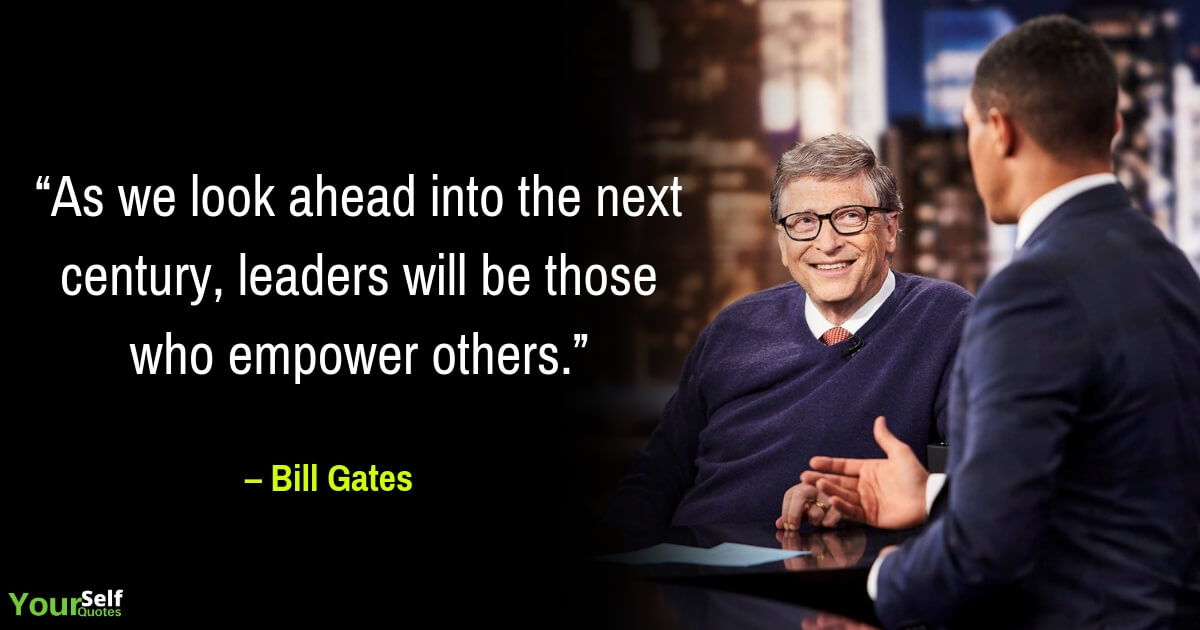 “The most amazing philanthropists are people who are actually making a significant sacrifice.”– Bill Gates 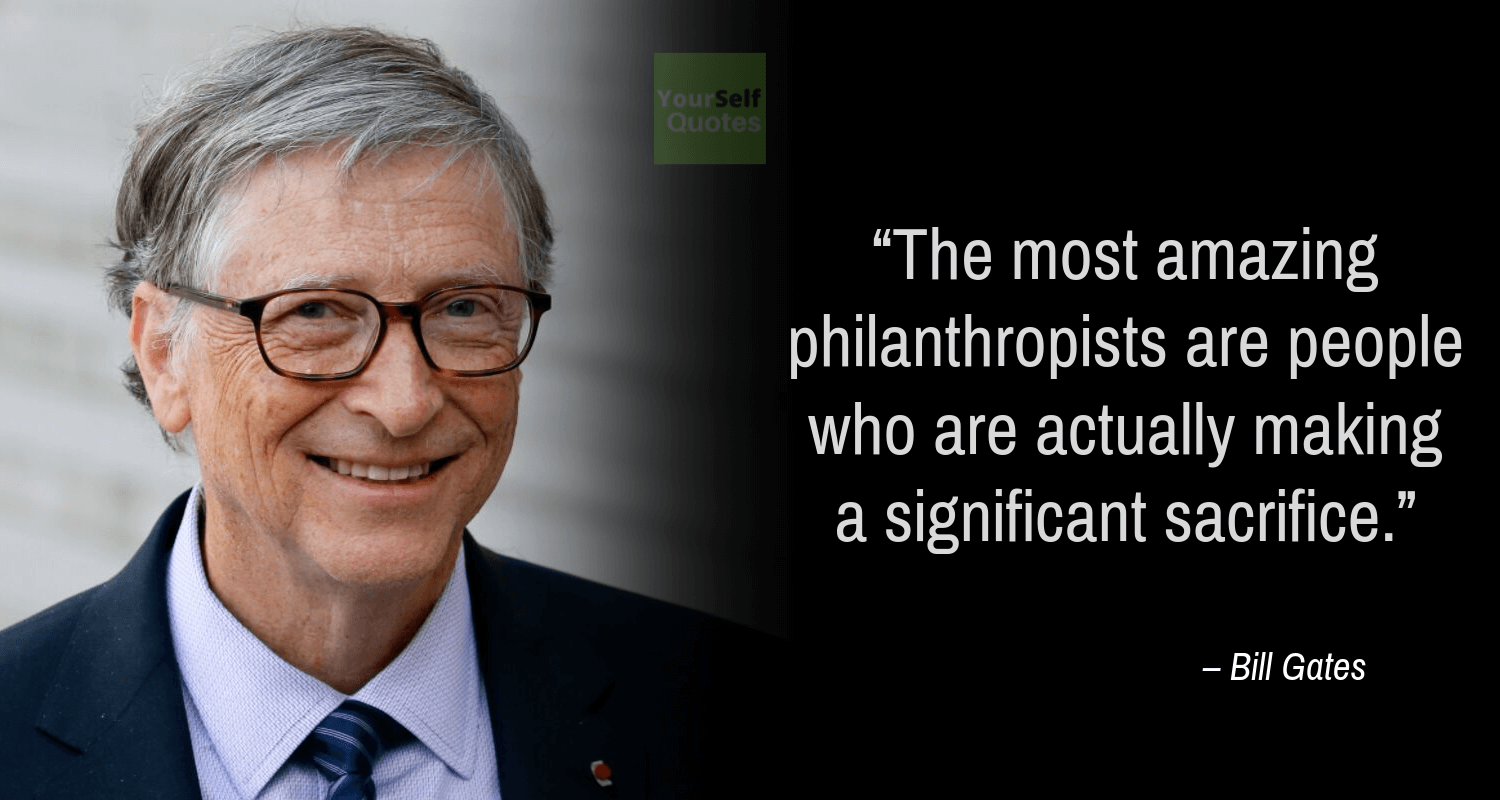 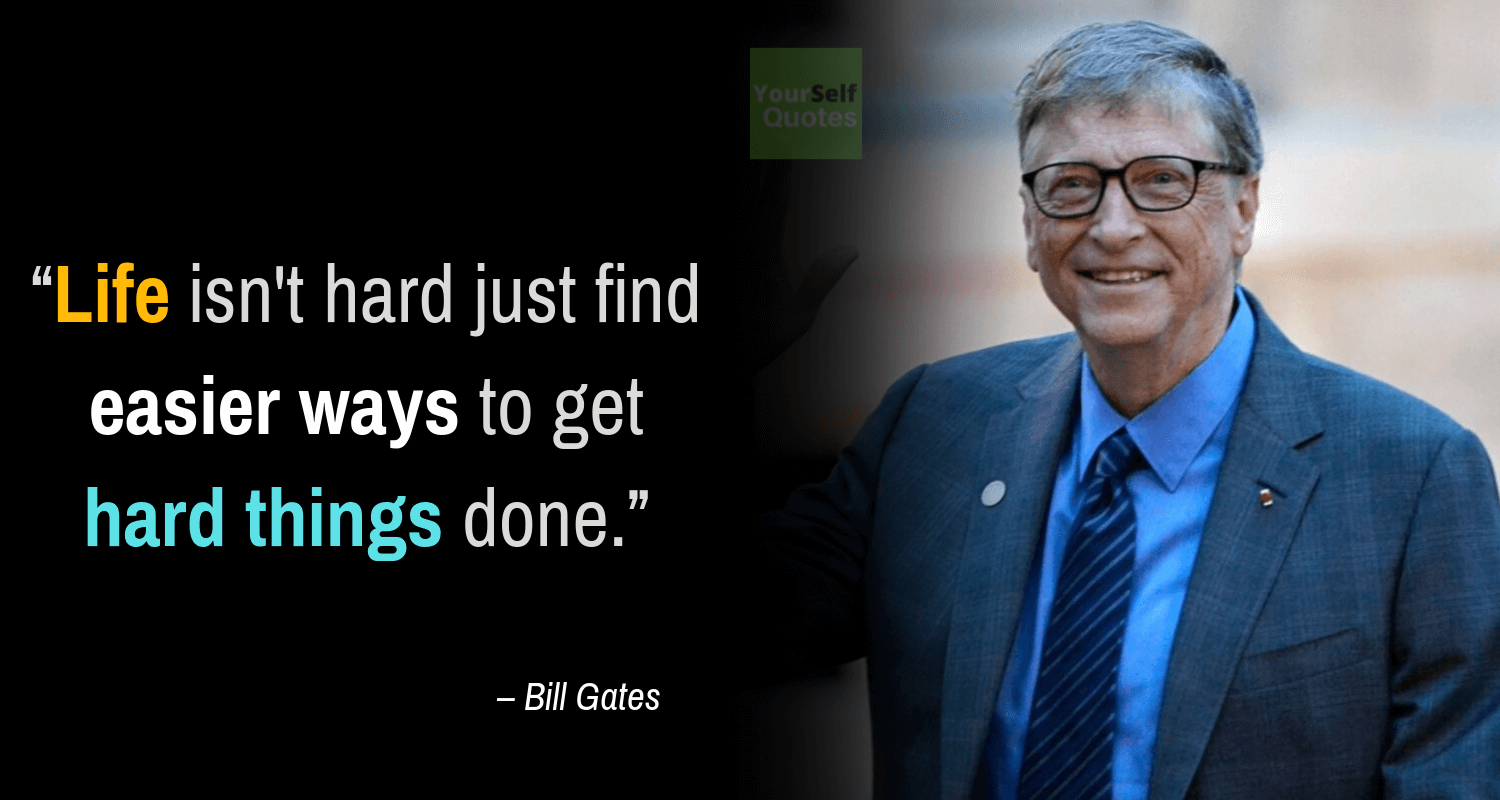 “To win big, You sometimes have to take big risks.” – Bill Gates 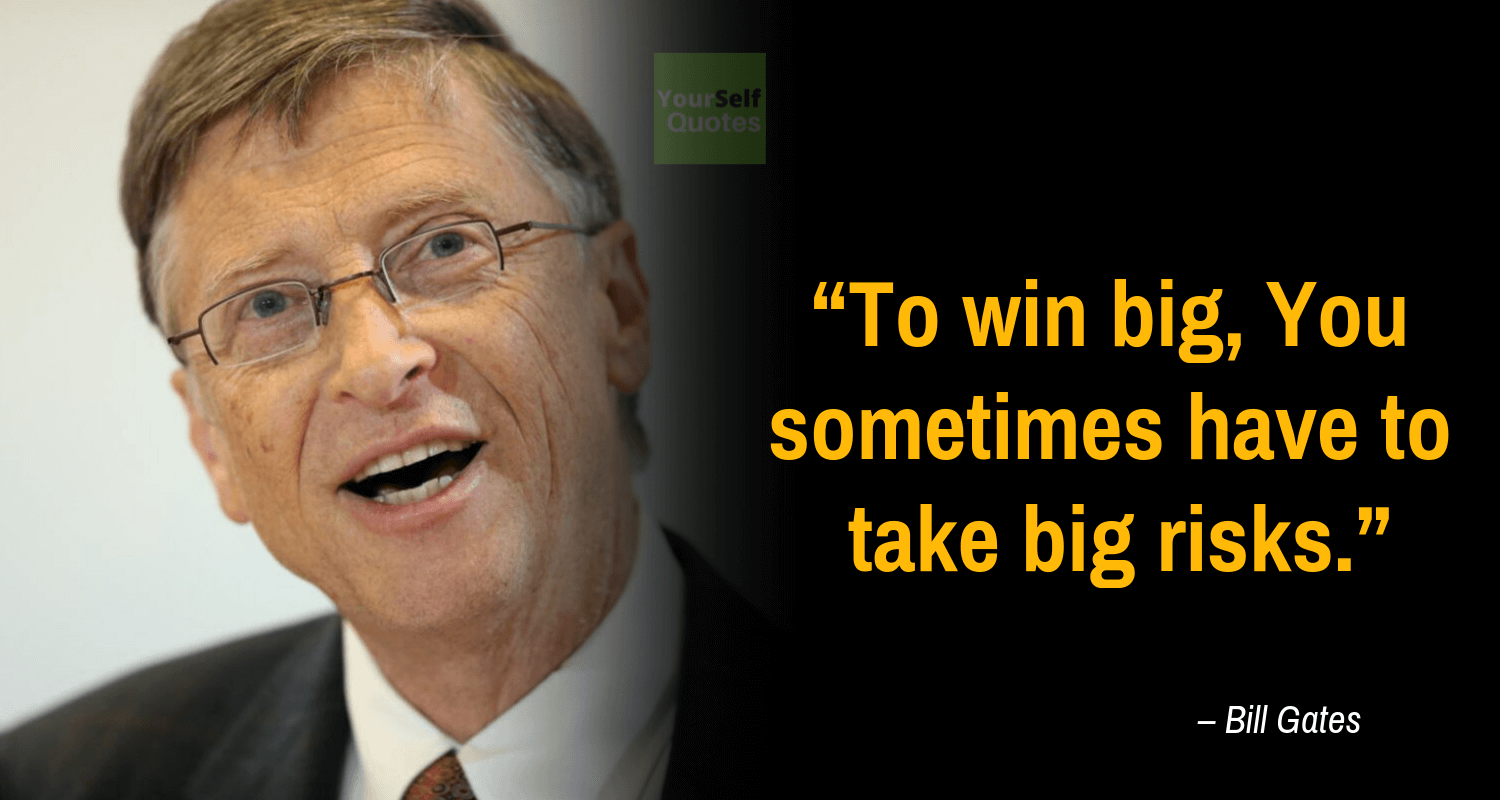 “The internet is becoming the town square for the global village of tomorrow.” – Bill Gates 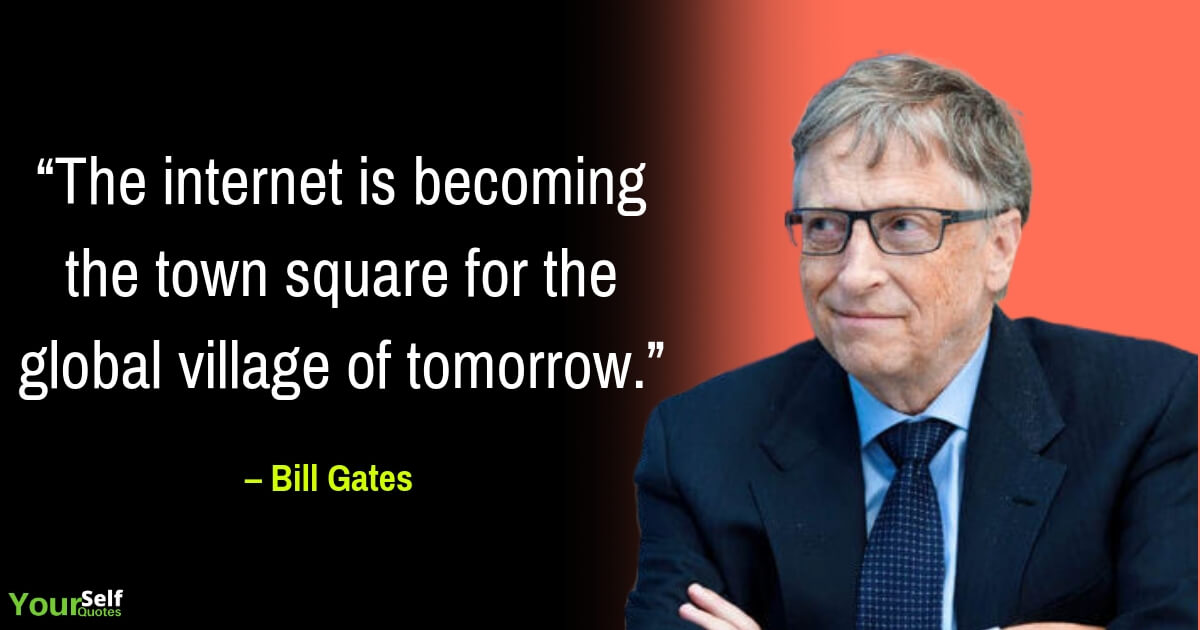 “Information technology and business are becoming inextricably interwoven. I don’t think anybody can talk meaningfully about one without the talking about the other.” – Bill Gates

“Legacy is a stupid thing! I don’t want a legacy.” – Bill Gates 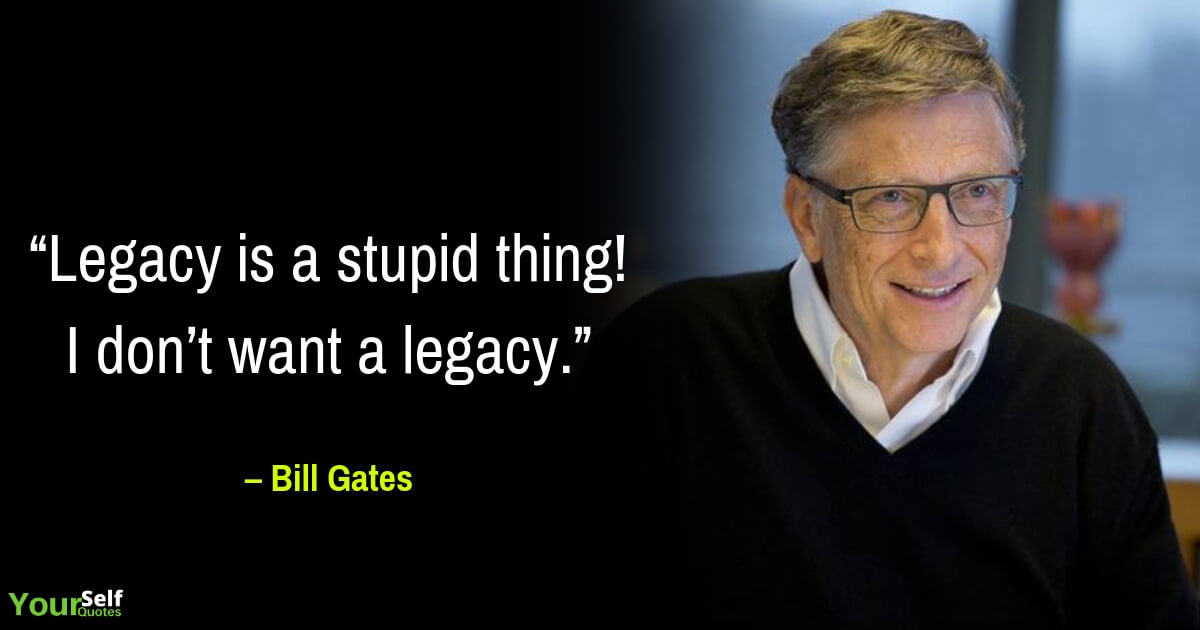 “If you go back to 1800, everybody was poor. I mean everybody. The Industrial Revolution kicked in, and a lot of countries benefited, but by no means everyone.” – Bill Gates

“Software is a great combination between artistry and engineering.” – Bill Gates 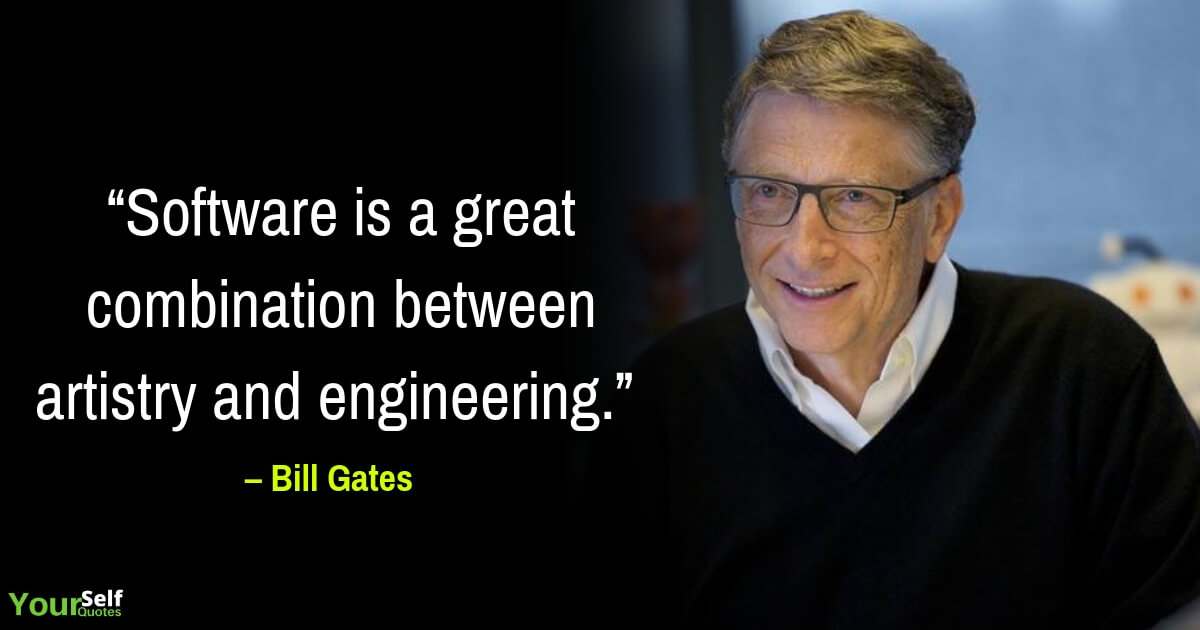 “Exposure from a young age to the realities of the world is a super-big thing.” – Bill Gates 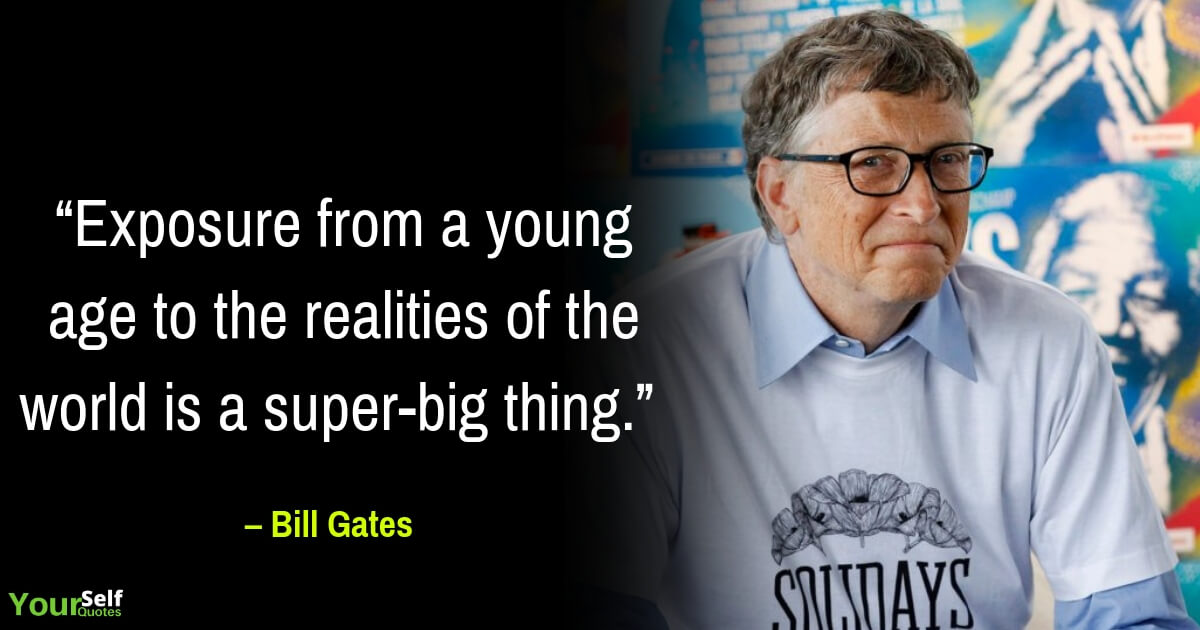 “Everyone needs a coach. It doesn’t matter whether you’re a basketball player, a tennis player, a gymnast, or a bridge player.” – Bill Gates

“Technology is just a tool. In terms of getting the kids working together and motivating them, the teacher is the most important.”– Bill Gates 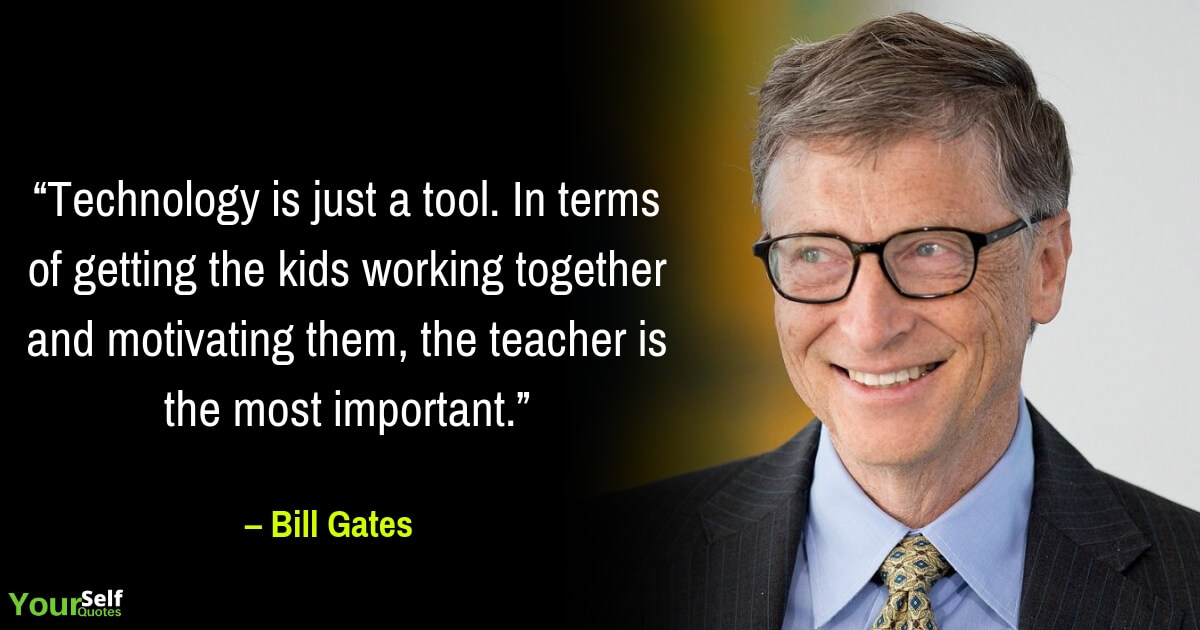 “There’s always been a lot of information about your activities. Every phone number you dial, every credit-card charge you make. It’s long since passed that a typical person doesn’t leave footprints.” – Bill Gates

“Some people, through luck and skill, end up with a lot of assets. If you’re good at kicking a ball, writing software, investing in stocks, it pays extremely well.” – Bill Gates 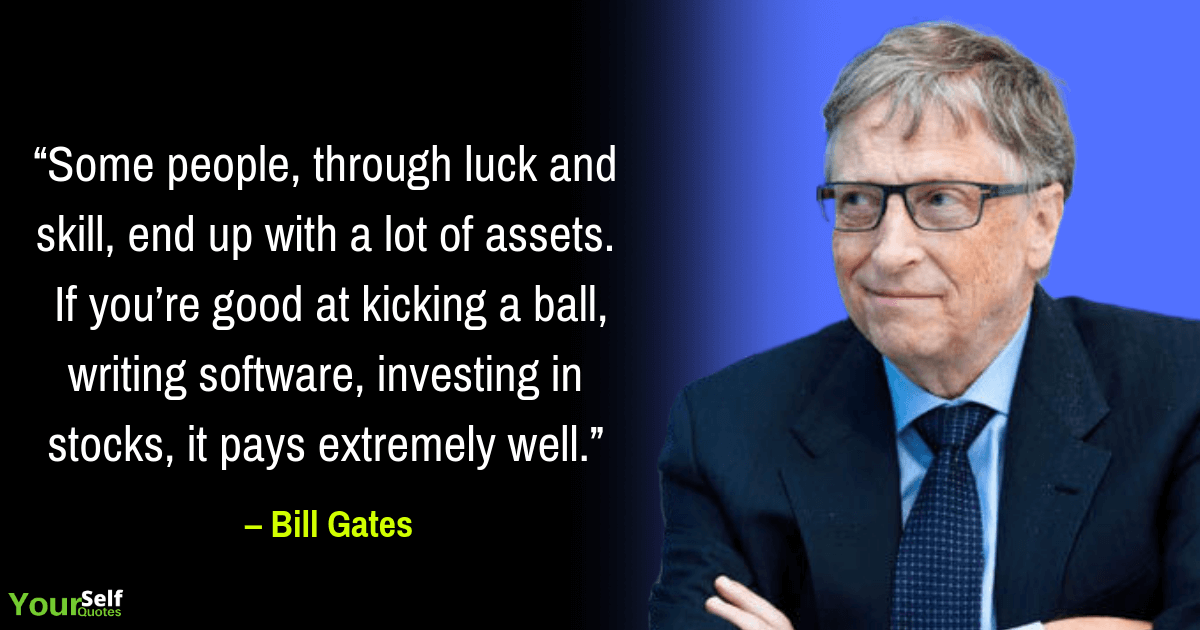 “Business is a money game with few rules and a lot of risks.” – Bill Gates

“In business, the idea of measuring what you are doing, picking the measurements that count like customer satisfaction and performance…… you thrive on that.” – Bill Gates

“Our success has really been based on partnerships from the very beginning.”– Bill Gates 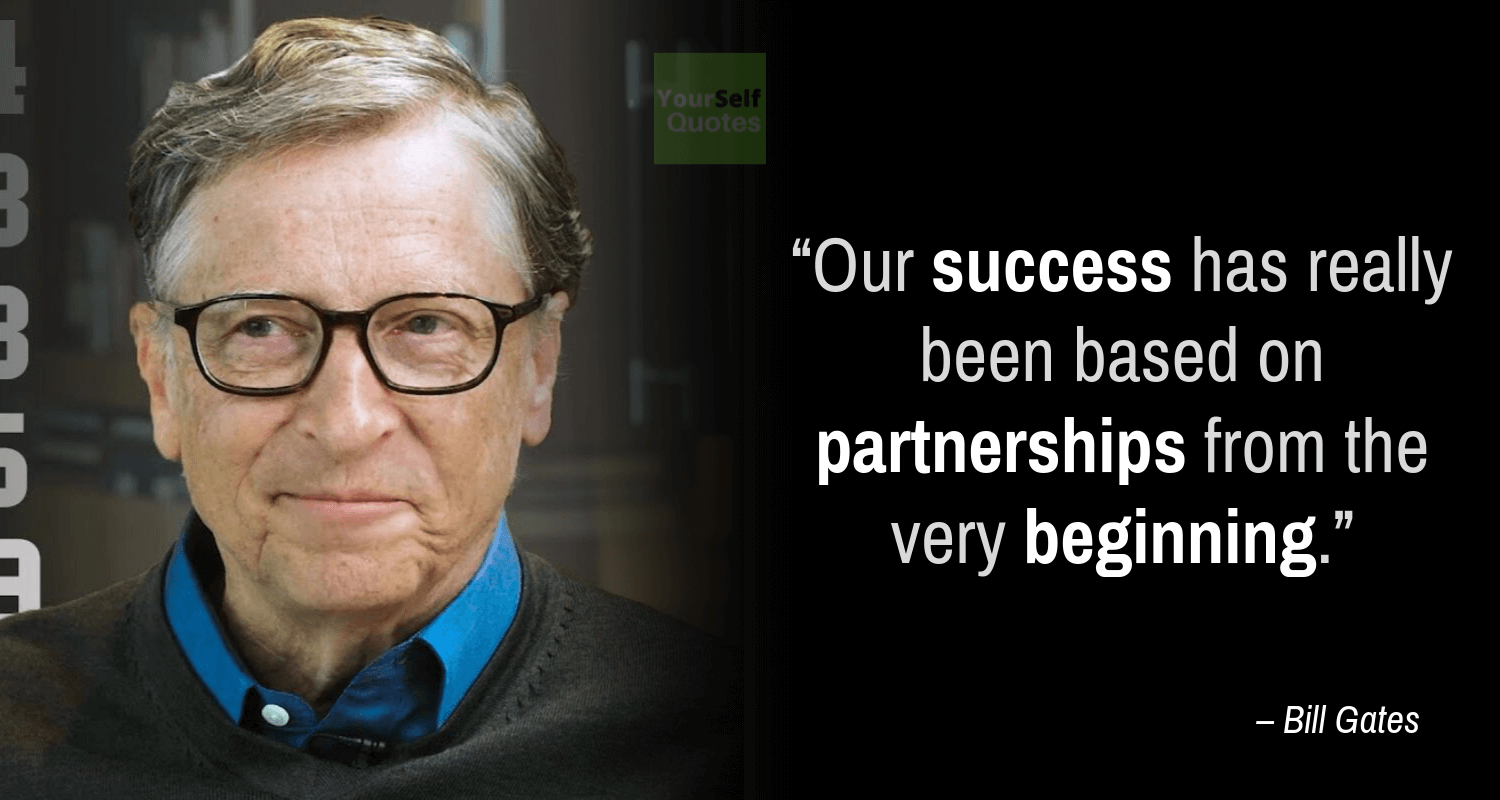 “If African farmers can use improved seeds and better practices to grow more crops and get them to market, then millions of families can earn themselves a better living and a better life.” – Bill Gates

“I believe innovation is the most powerful force for change in the world.”– Bill Gates

“The competition to hire the best will increase in the years ahead. Companies that give extra flexibility to their employees will have the edge in this area.” – Bill Gates

“I will always choose a lazy person to do a difficult job… because he will find an easy way to do it.”– Bill Gates 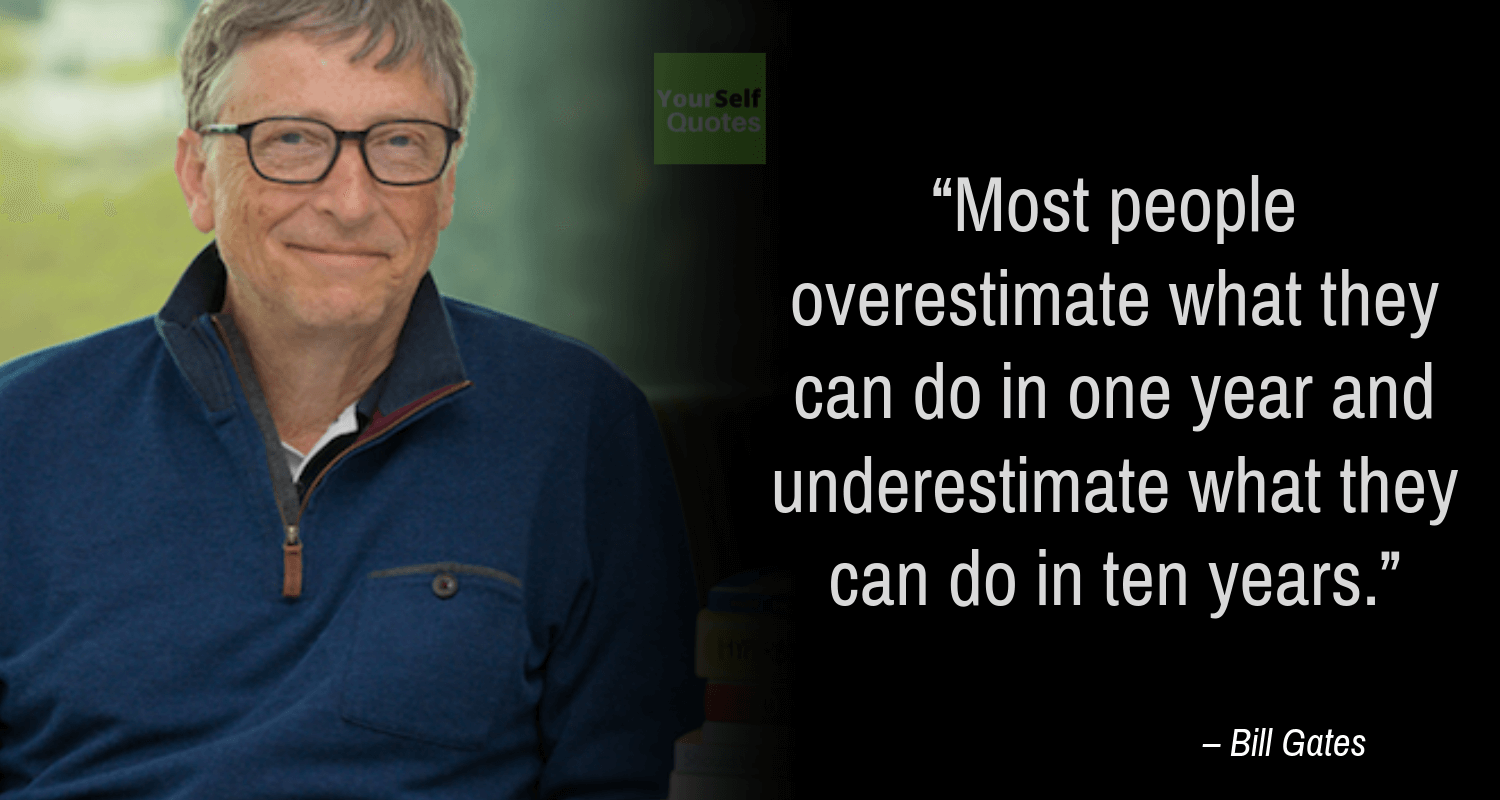 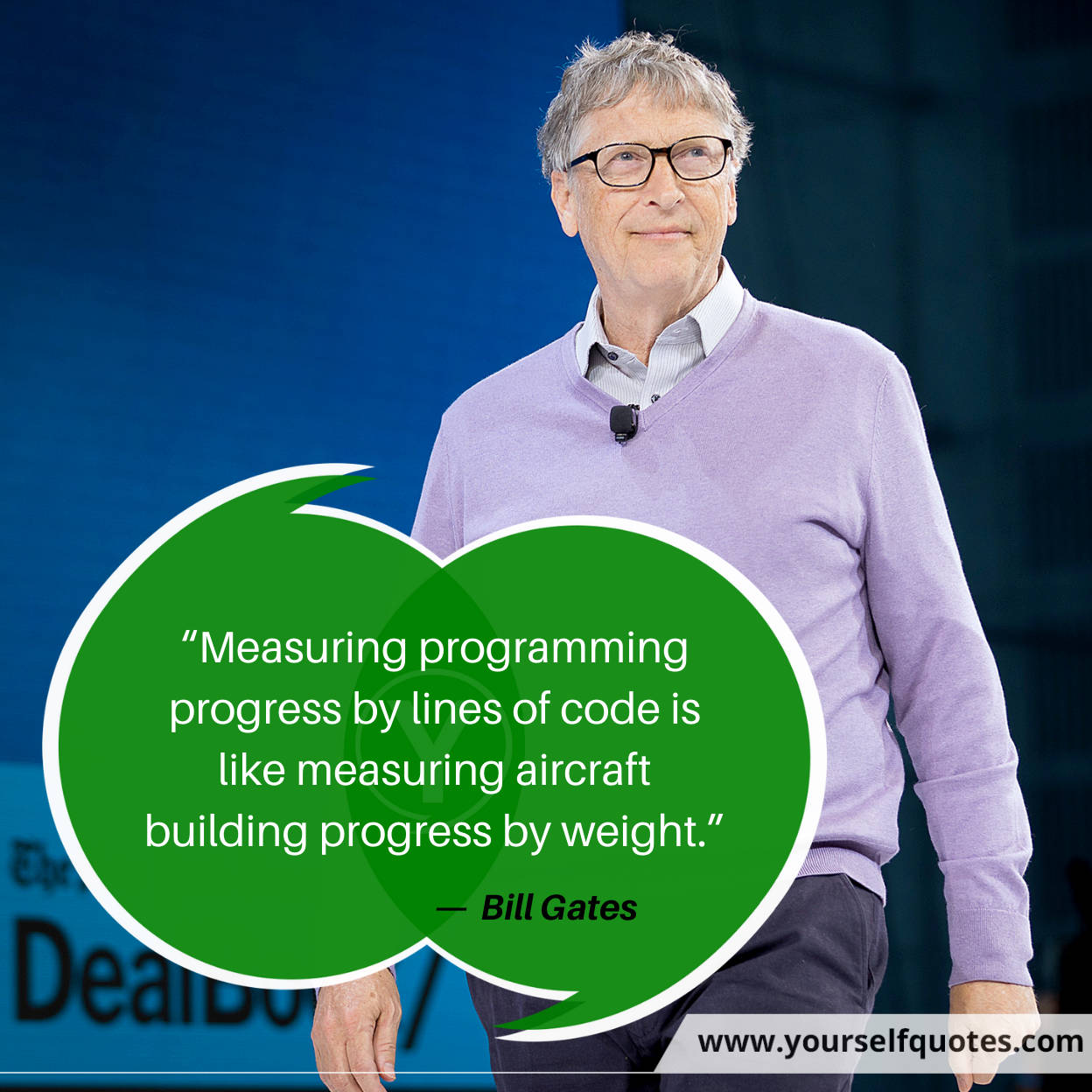 “Rules your children did not and will not learn in school.” – Bill Gates 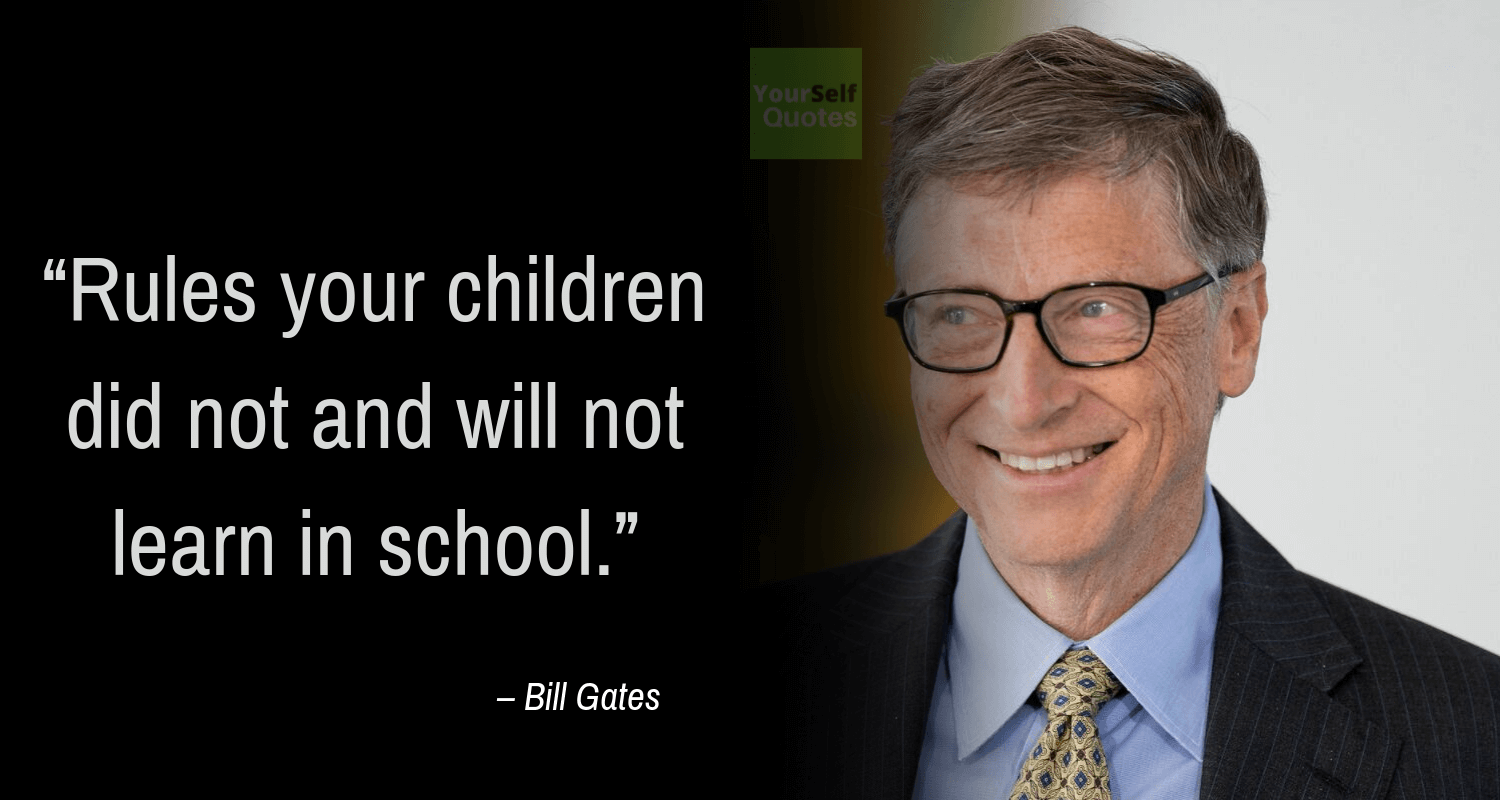 “I am in the camp that is concerned about super intelligence.” – Bill Gates 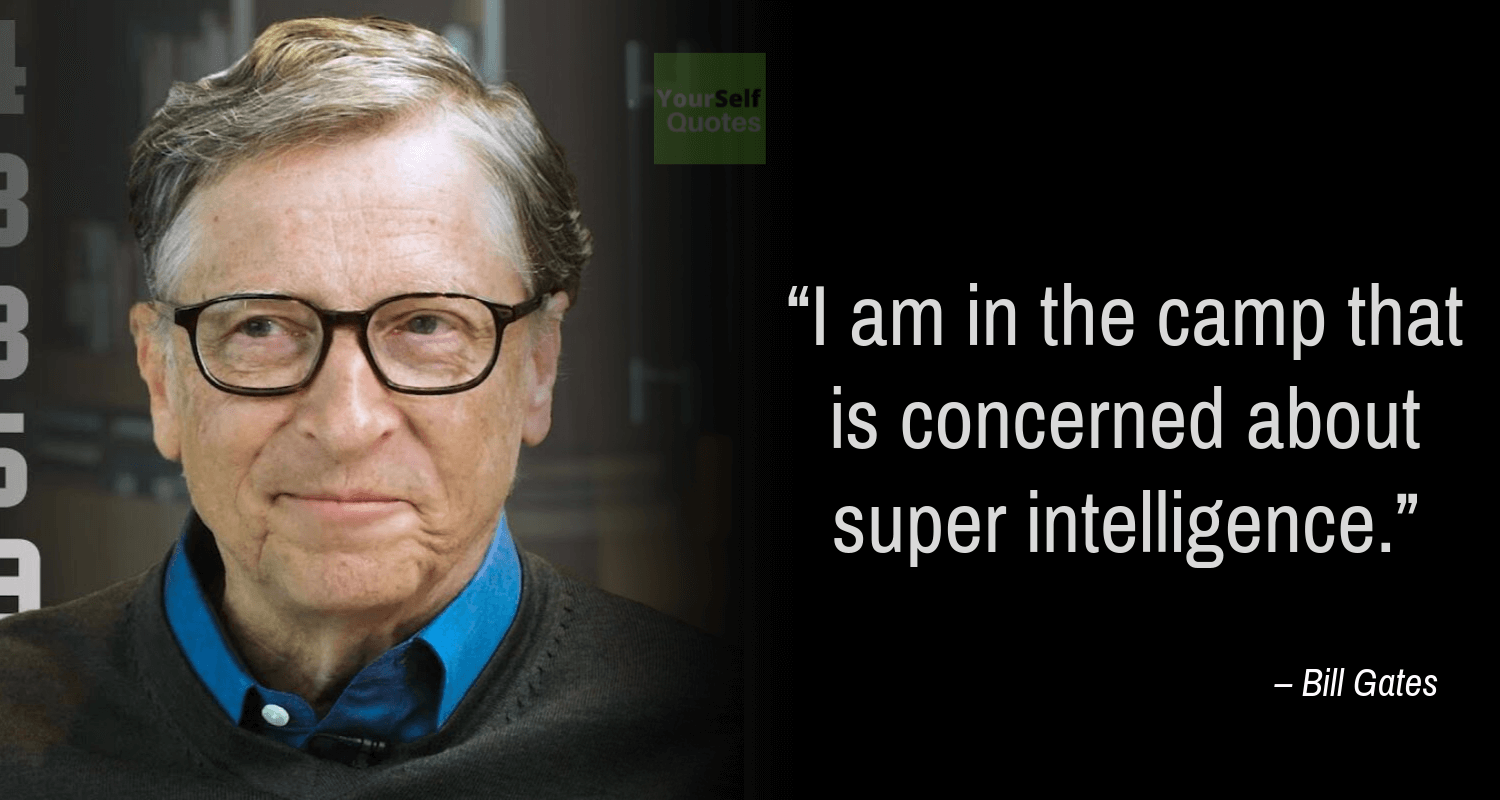 “I think it’s fair to say that personal computers have become the most empowering tool we’ve ever created. They’re tools of communication, they’re tools of creativity, and they can be shaped by their user.” – Bill Gates 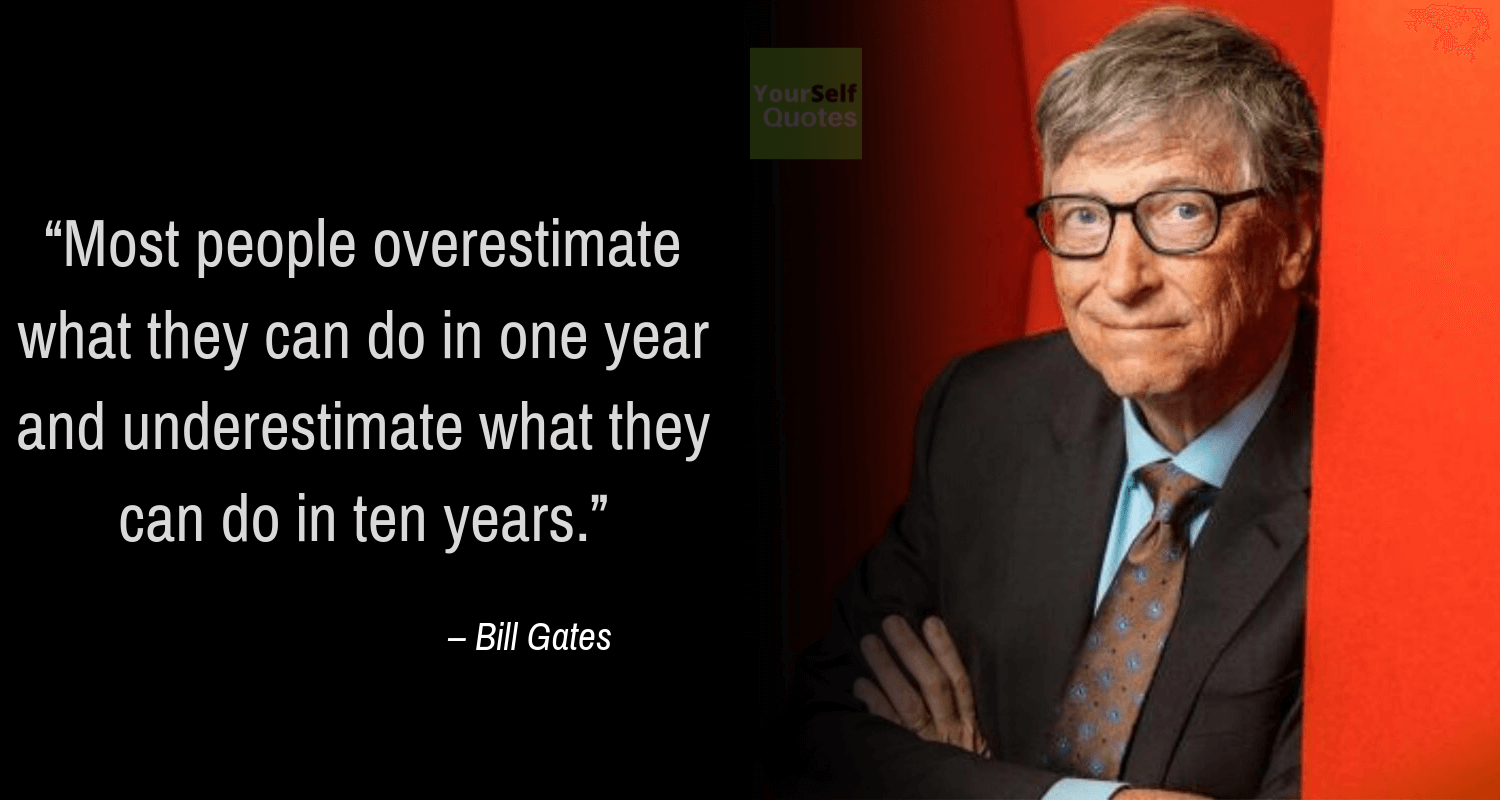 “Drones overall will be more impactful than I think people recognize, in positive ways to help society.” – Bill Gates 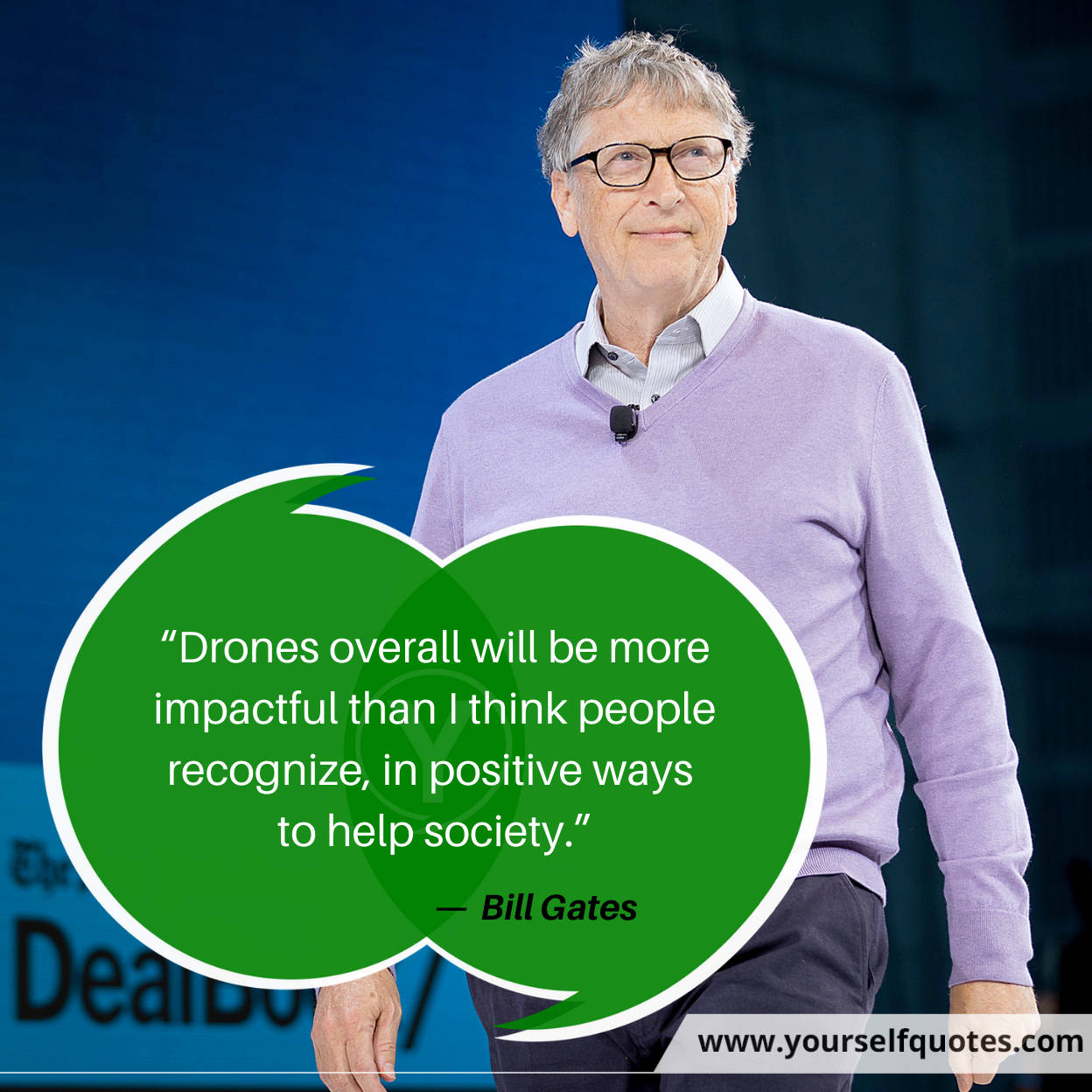 “The general idea of the rich helping the poor, I think, is important.” – Bill Gates 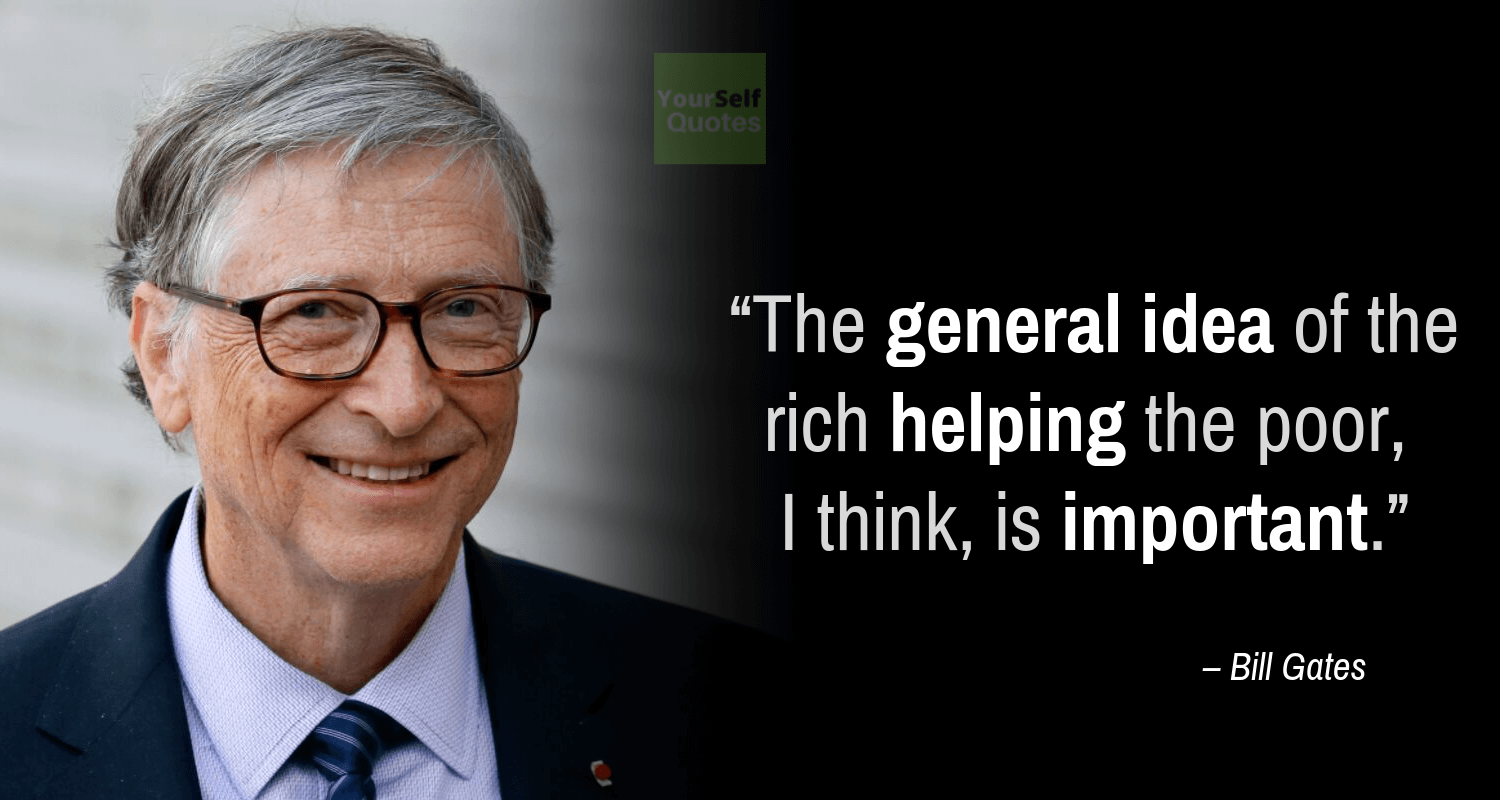 Bill Gate’s Top 10th Rules of Success. Which one is Your Favorite??

The inspirational words by Bill Gates illuminated the spark of innovation, the foundations of success, and a healthy promise to the future.

He is very much realistic in his thoughts and process. His keen interest in technology & software was a blessing for all of us to enter the digital world. Bill Gates is a man whose words and quotes leave a footprint for coming generations to walk through and gain more insights about him and his work style. In short, if you want to live a smart life as an intelligent man, Bill Gates then follows his theory and reads the smartest quotes over the internet & other digital platforms to make them smarter & wiser in life.

May these Brilliant Bill Gates Quotes take you to another level of success. Now it’s your turn to share these amazing quotes with your friends, family, and dear ones.