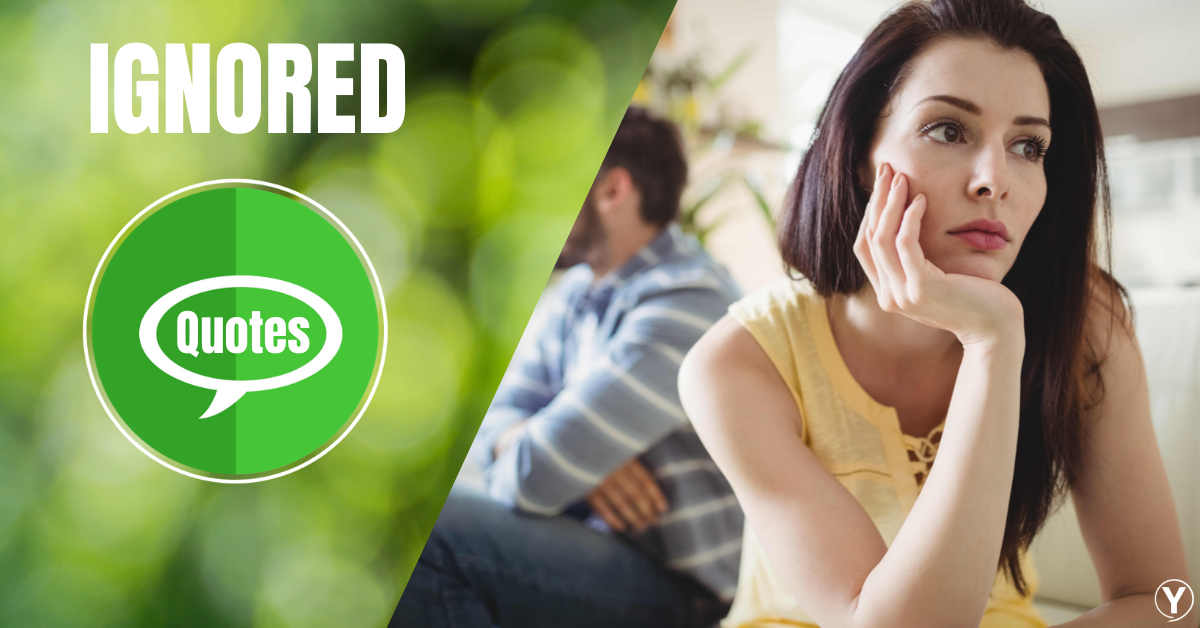 Have you ever felt furious after being ignored by someone in life? It will be a surprise if you answer with a “No.” In fact, it is a completely natural reaction if we get hurt or angry when someone ignores us. And almost all of us have experienced ignorance at some point in our lives.

Trust me, the silent treatment that we get is extremely painful. Ignorance is no less than a form of psychological or emotional manipulation or abuse. If someone ignores you in your workspace, relationship, friendship, or even family, I know how hard a time you are having maintaining your emotional health. Today we decided to help you to stay positive and happy even amid intense ignorance. We are writing this article for you, and all you have to do is read it carefully. So, let’s get started.

How to Respond to Ignorance Positively?

When someone we love or close to us ignores us, we are most likely to look for ways to deal with the negative emotions or the silent treatment it brings about. We definitely try to find many ways to attract their attention or gel up with them again. But suppose after multiple tries, you are not getting enough response or reciprocation. In that case, this is probably the time when you should follow some other methods. Here we have some tips to help you to deal with ignorance better:

Take A Step Back

No matter how much the relationship is important to you, your self-respect comes first. Sometimes when people ignore us for their own reason, it hurts our ego so much that we forget to keep calm and smother the other person for knowing the reason of ignorance. When you are in such a situation, you need to ask yourself one question, is it their ignorance that is driving you crazy, or is it your obsession.

If we become a little positive while being ignored, we might see different positive aspects, too. Such as when someone is ignoring you, they may simply need some space for themselves. They are probably looking for some own time to collect their thoughts or deal with their own emotions. It is always better to give people time and work on themselves in the meantime.

To lessen the pain of ignorance, you can find good things to do and keep yourself busy. Rather than keeping yourself busy with the thoughts of finding reasons why someone is ignoring you, you can do things that uplift and improve you. You can indulge yourself in doing things that you love. You can be friends with other people, pursue your hobbies, or do whatever you like. I am sure anything will be better than obsessing yourself over the person who is ignoring you.

Check If It Is Really Ignorance

Sometimes we misunderstand situations and people. If you think that someone is simply ignoring you, maybe the person is dispensing with other private problems, or it is also possible that you are misunderstanding the person. You can talk to them directly or try to read between the lines to check if they are really snubbing you.

Sometimes we blindly go with the flow without controlling our emotions. I know how being ignored hurts. But remember that when someone is ignoring you, maybe they are trying to achieve exactly that. And when you are getting hurt, that is not changing their mind either. Rather than overreacting to the situation or hurting yourself again and again with the thought of being ignored, you can feed your mind with the fact that everything happens for some reason. Though it is hurting you today, you will overcome the situation in the nearest future.

Communication is the key to every good relationship. When we communicate openly, we become able to deal with many problems. Communication even helps us to differentiate between problems that exist and problems that we think exist. Suppose the other person has some concerns about your relationship that they are afraid to bring up. In that case, you can try speaking with them instead. But remember that while communicating, you have to stay calm and without anger.

“Ignorance is an enemy, even to its owner.” 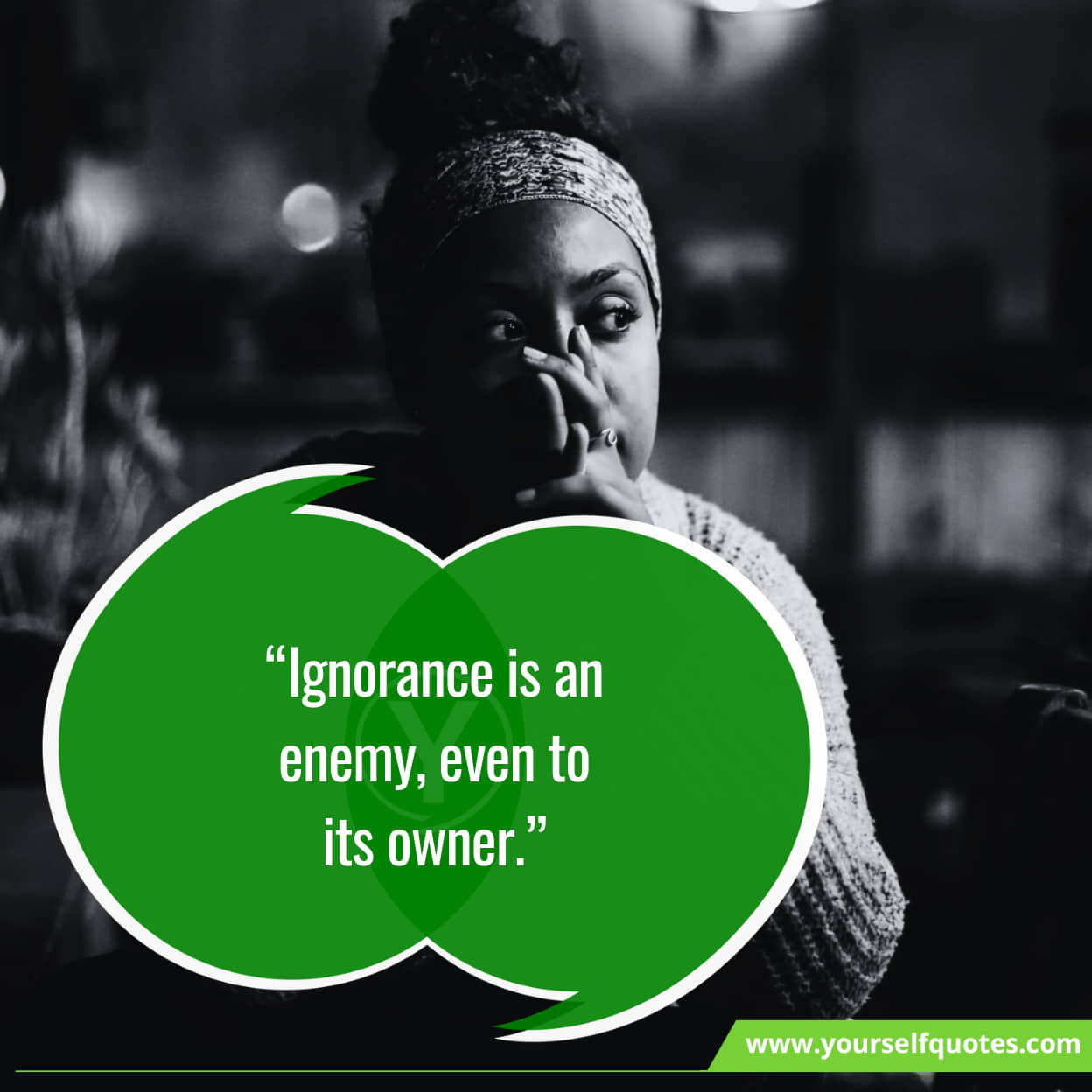 “I love out loudly but don’t receive the same kind of love. It sucks.”

“No one likes being ignored because everyone wants even a bit of attention from you.”

“I have always been invisible to people, and most of the time, I am used to it; sometimes, I hurt.”

“Whatever the cost of our libraries, the price is cheap compared to that of an ignorant nation.” 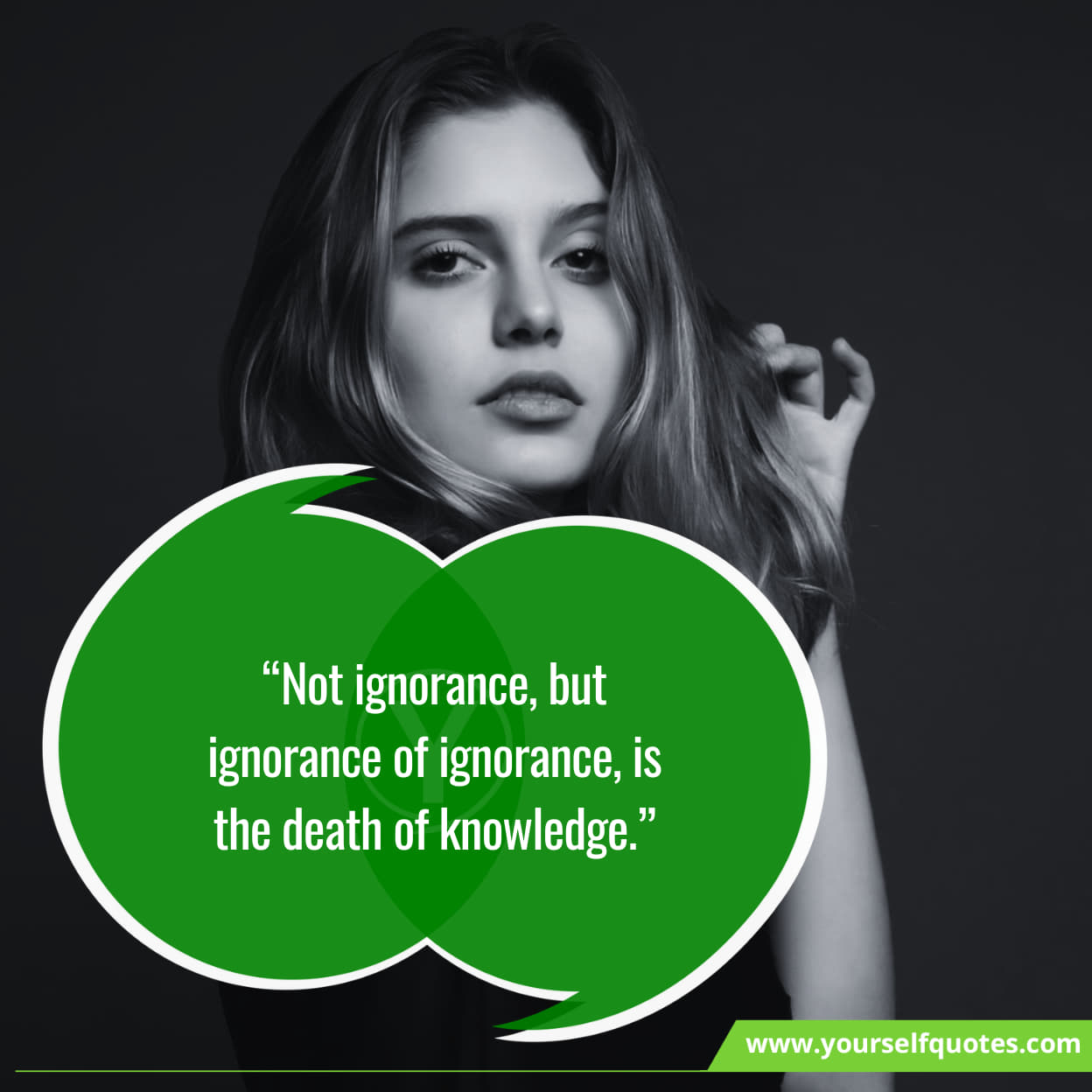 “The greatest enemy of knowledge is not ignorance; it is the illusion of knowledge.” — Daniel J. Boorstin

“There are no uninteresting things, only uninterested people.” — G.K. Chesterton

“There is nothing more frightful than ignorance in action.” — Johann Wolfgang von Goethe

“It is more hurtful to be ignored than to be hated because it makes you feel like nothing.”

“Being ignorant is not so much a shame, as being unwilling to learn.” — Benjamin Franklin

Inspiring Quotes On Being Ignored 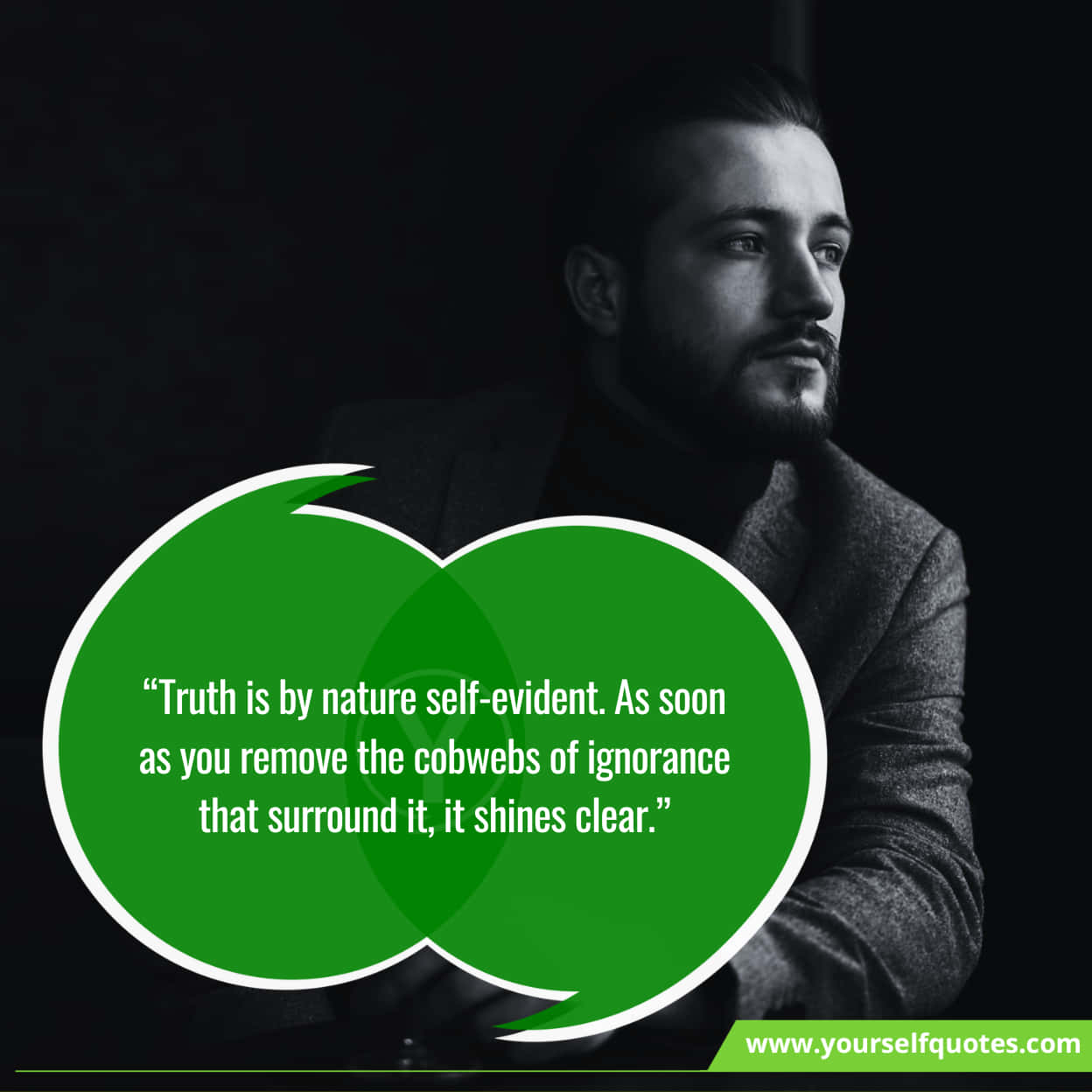 Energetic Inspiring Quotes On Being Ignored 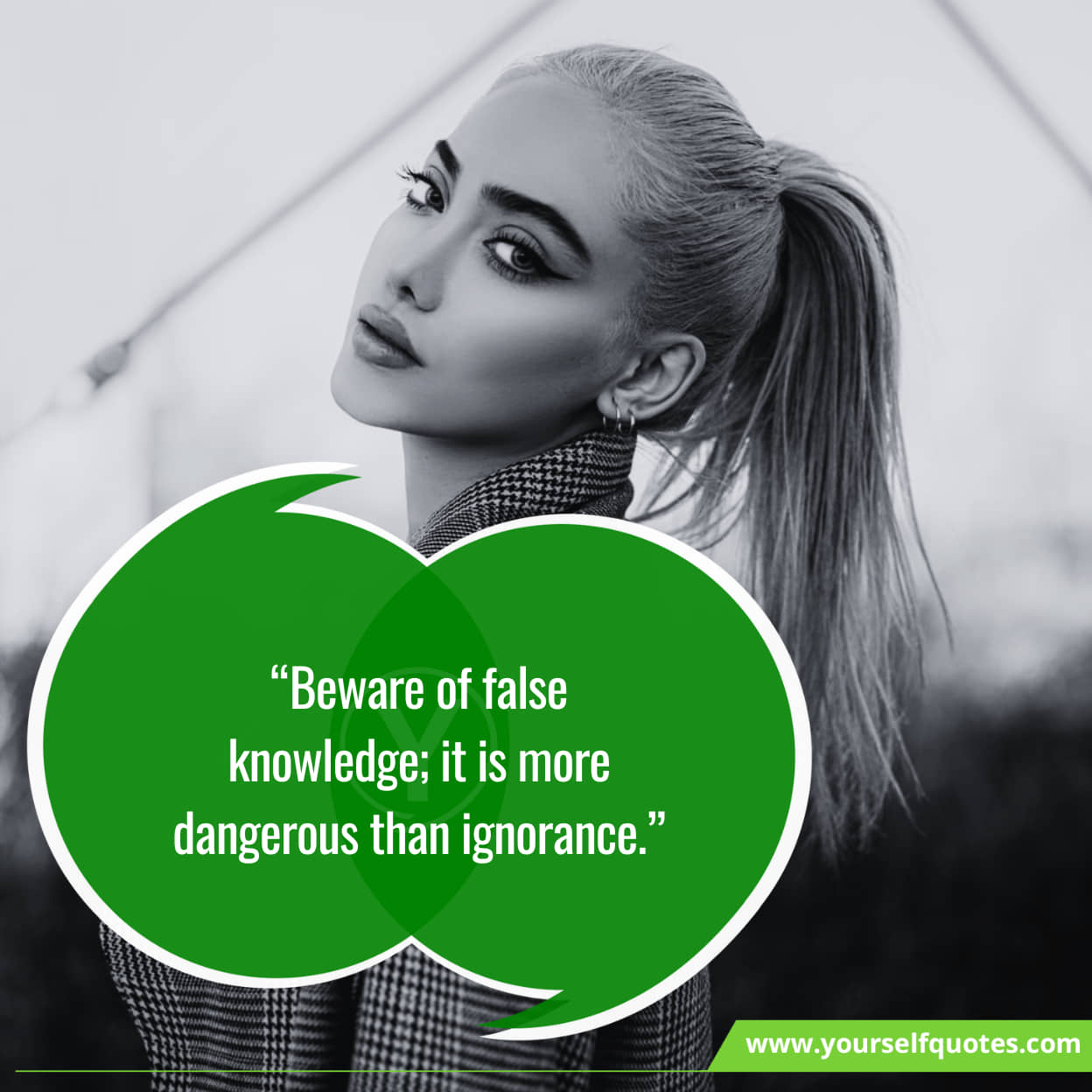 Inspiring Quotes On Being Ignored

“Real knowledge is to know the extent of one’s ignorance.” 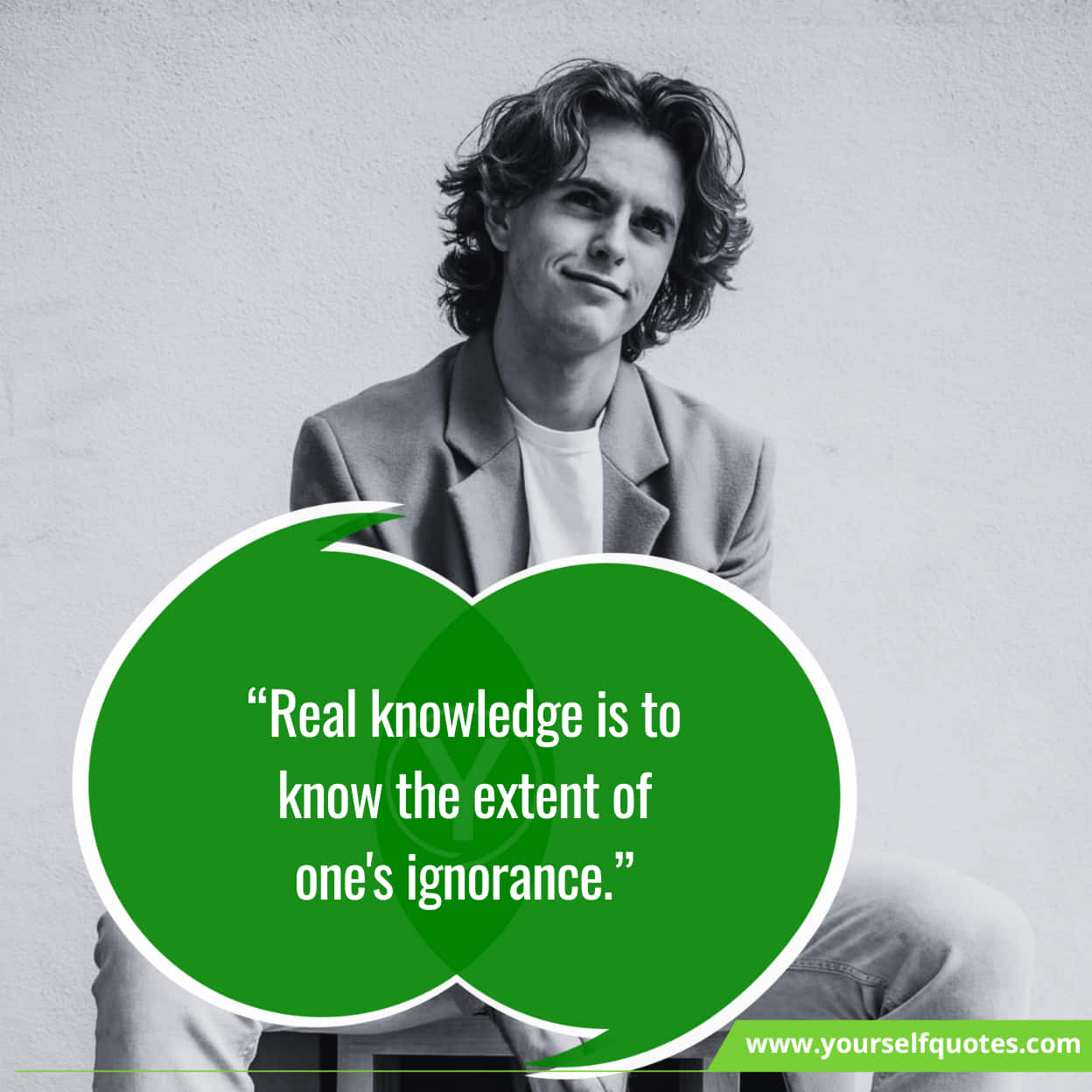 “Ignorance is the parent of fear.” — Herman Melville

“No matter how busy you may think you are you must find time for reading, or surrender yourself to self-chosen ignorance.”

“Stress is an ignorant state. It believes that everything is an emergency. Nothing is that important.”

“Travel brings wisdom only to the wise. It renders the ignorant more ignorant than ever.” — Joe Abercrombie

“A wise man makes his own decisions, but an ignorant man mindlessly follows the crowd. ” 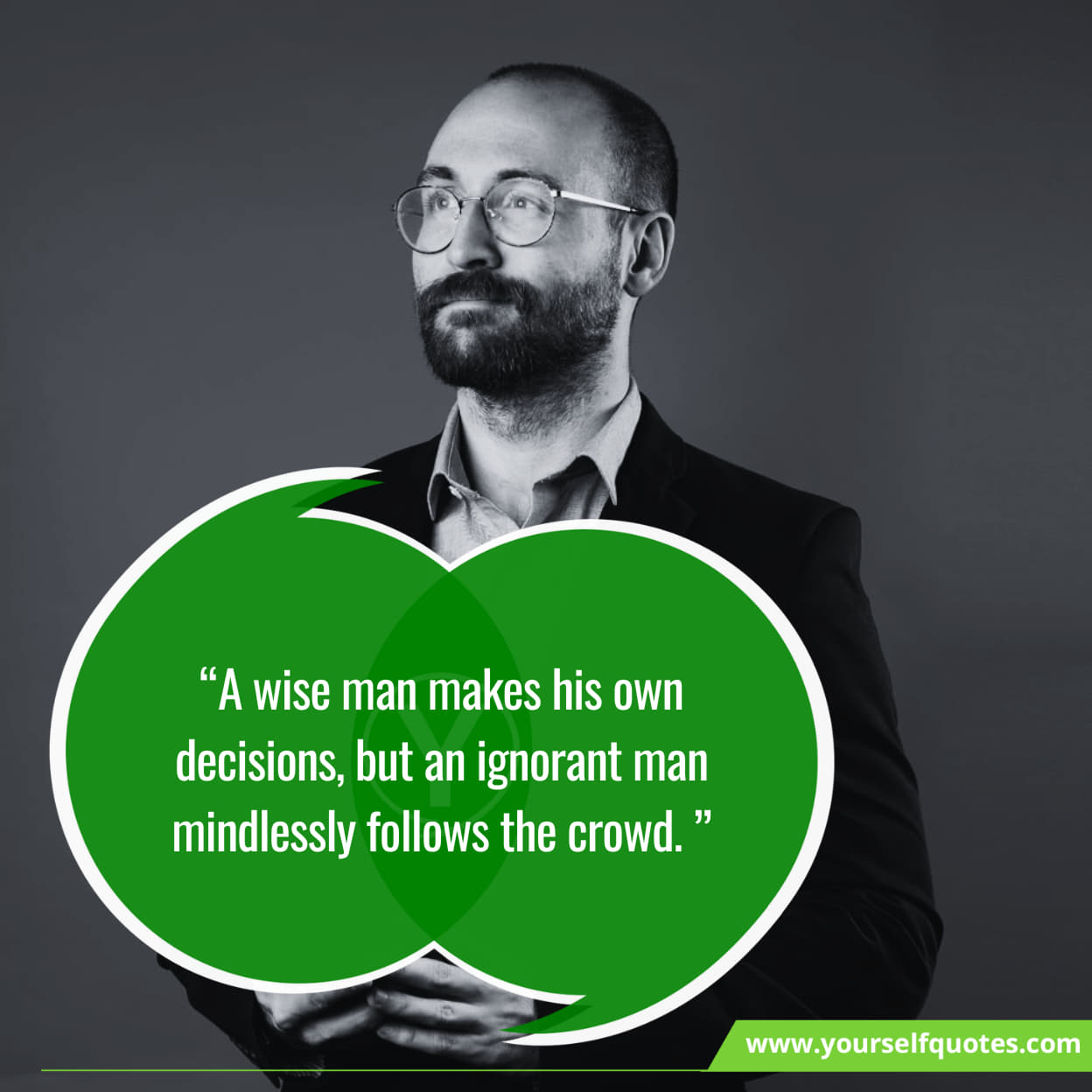 “He must be very ignorant, for he answers every question he is asked.” — Voltaire

“Entire ignorance is not so terrible or extreme an evil and is far from being the greatest of all; too much cleverness and too much learning, accompanied by ill bringing-up, are far more fatal.”

“We kill all the caterpillars, then complain there are no butterflies.” — John Marsden

“It is certain, in any case, that ignorance, allied with power, is the most ferocious enemy justice can have.” — James Baldwin

“Where ignorance is our master, there is no possibility of real peace.” 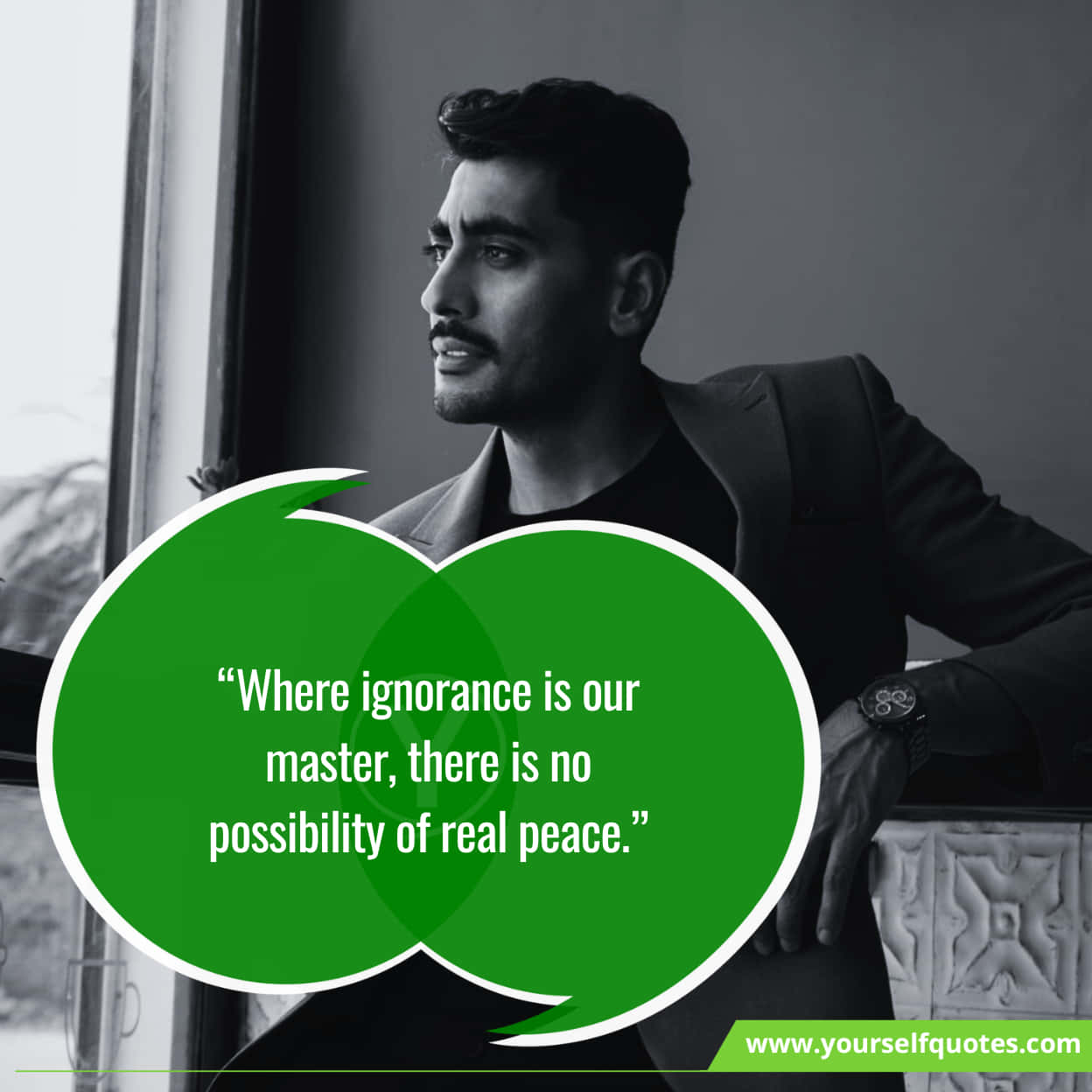 “True, a little learning is a dangerous thing, but it still beats total ignorance.”

“Nothing in the world is more dangerous than sincere ignorance and conscientious stupidity.”

“The person who admits ignorance shows it once; the one who tries to hide it shows it often.”

“The person you consider ignorant and insignificant is the one who came from God, that he might learn bliss from grief and knowledge from gloom.”

“Ignorance is the night of the mind, a night without moon or star.” 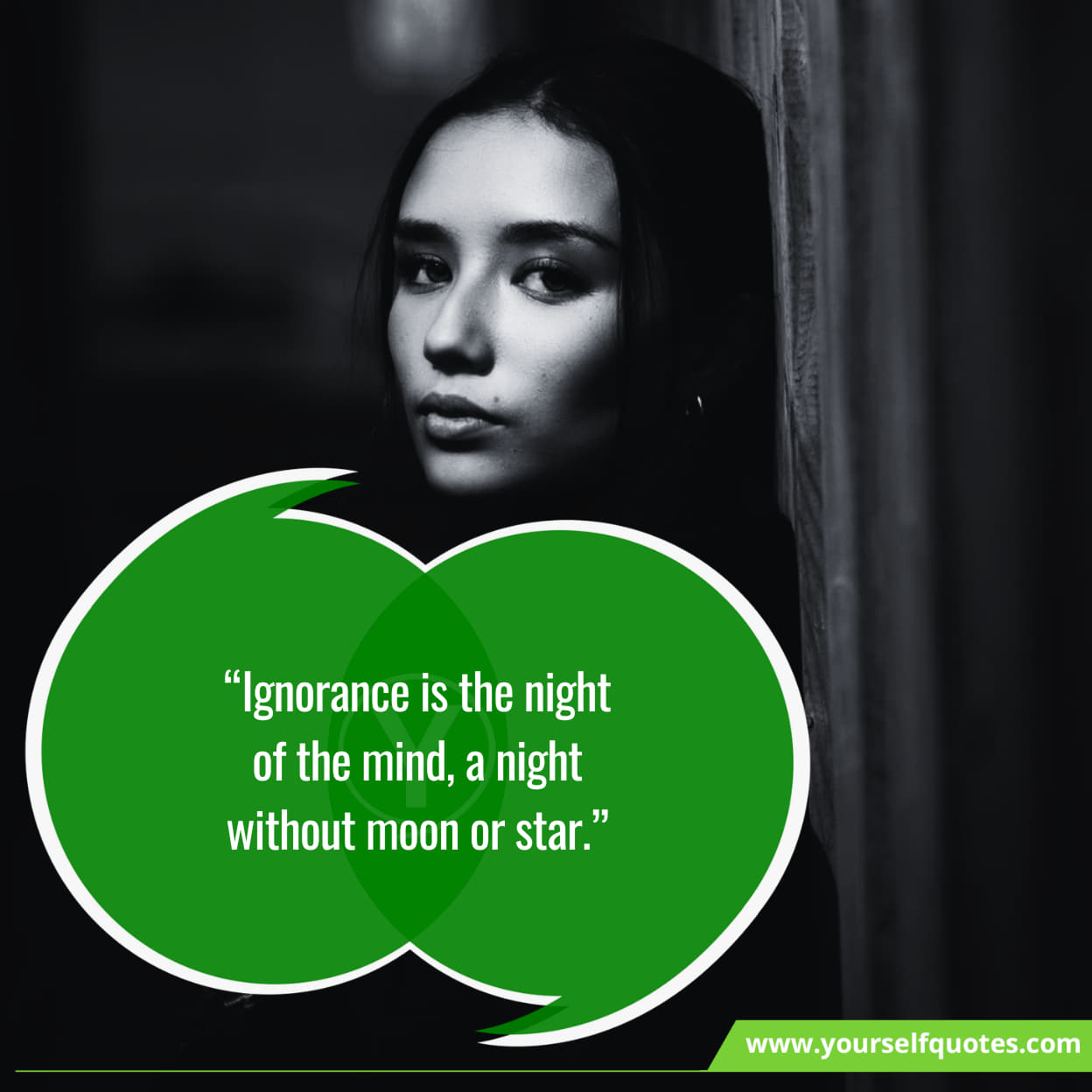 “To be always fortunate, and to pass through life with a soul that has never known sorrow, is to be ignorant of one half of nature.”

“Love that ignores acts of disobedience is not loved but is ignorance or uncaring.”

“The truth is incontrovertible, malice may attack it, ignorance may deride it, but in the end; there it is.”

“The key is choice. You have options. You need not spend your life wallowing in failure, ignorance, grief, poverty, shame, and self-pity.”

“Ignorance should not be tolerated. It isn’t worthy of our understanding or sympathy. ” 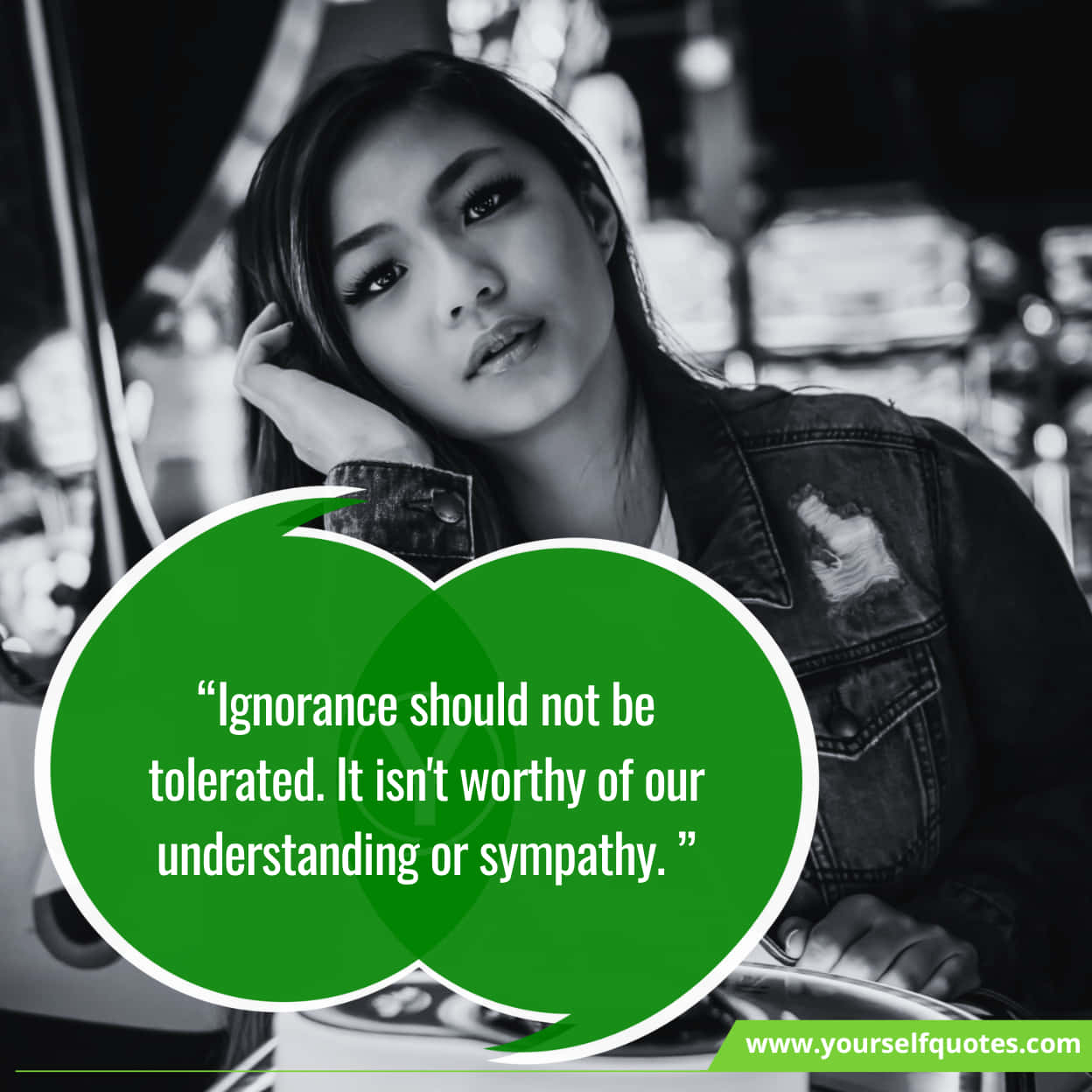 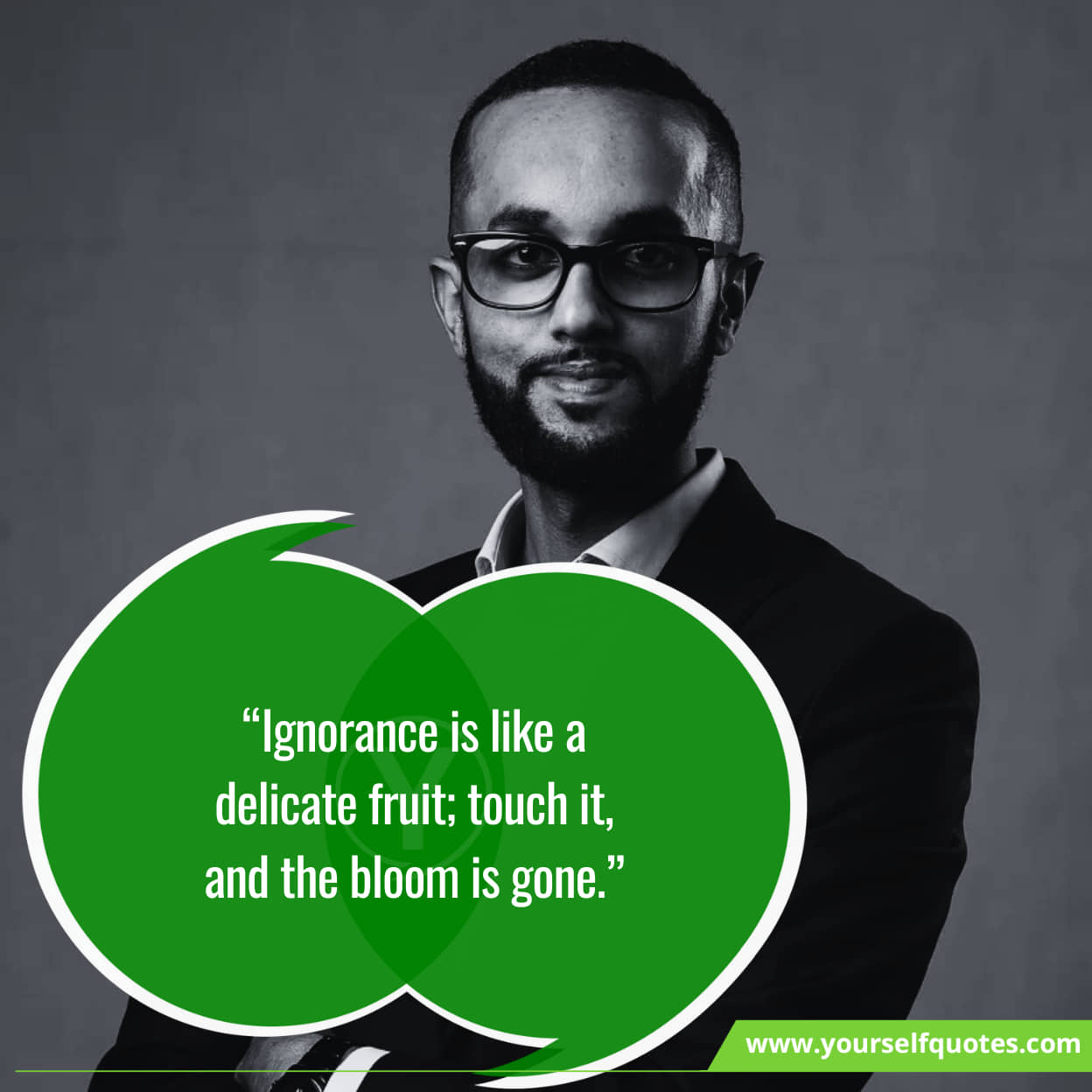 Remember that whatever you may do, you cannot get an equal quantity of love and attention from everyone. Sometimes people will care for you while the other times they can ignore you. You cannot expect things to be the same all the time. And rather than complaining about the mishappening, you should try and adapt yourself to the process.

In the process, be calm and carry on with your life. I know that it takes time for you to change. But you cannot control others but can dictate your own emotional response to other situations. Hope the quotes on ignorance are enough to make you believe that you can deal with ignorance positively.

Which are your favourite Quotes About Being Ignored? Leave a comment below.