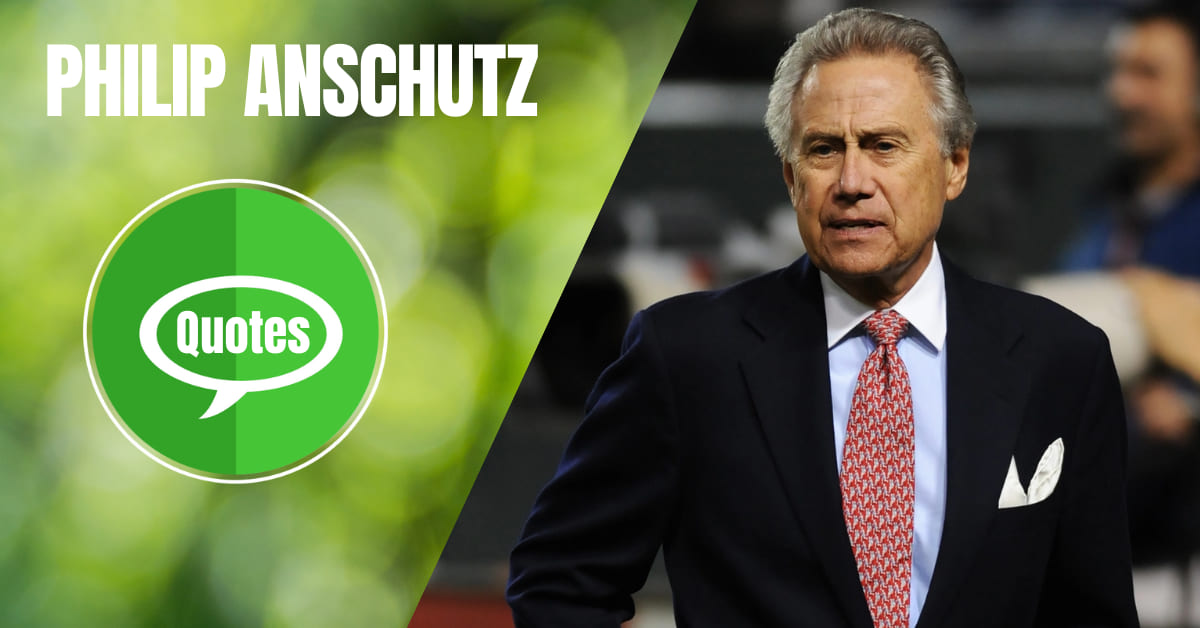 Philip Anschutz is an American entrepreneur.

He is best known as ‘The Man Who Owns L.A.’ because of his immense success in a multitude of businesses, including energy, railways, real estate, sports, telecommunications, and entertainment.

Philip Anschutz was born on December 28, 1939, in Russell, Kansas, to Fred and Marian Pfister Anschutz, whose memorial bequest formed the Anschutz Family Foundation, which has distributed over $50 million to various charitable causes.

Anschutz graduated from Wichita High School East in 1957 and attended the University of Kansas, where he was a member of the Sigma Chi Fraternity.

Anschutz paid $10 million to purchase the 250,000-acre Baughman Farms, one of the country’s largest farming enterprises, near Liberal, Kansas. This resulted in his first fortune in the oil industry. He later worked in railroads and telecoms before entering the entertainment industry.

Fortune magazine compared him to J.P. Morgan, a 19th-century billionaire, in 1999, saying that both men “struck it rich in a fundamentally different way: they operated across an astounding array of industries, mastering and reshaping entire economic landscapes.”

Anschutz’s empire spans the globe and includes over 150 companies, nearly all of which are privately held. Among them is the newspaper publisher ‘Clarity Media Group,’ the sports team ‘Los Angeles Galaxy,’ and the oil drilling company ‘Circle A Drilling.’

The Anschutz Entertainment Group (AEG) is a division of The Anschutz Corporation and a sports and music entertainment presenter. It is the largest owner of sports teams, events, and venues in the world.

Anschutz is one of only four people to have received the National Soccer Hall of Fame’s Medal of Honor for his contributions to the growth of the sport in the United States. Anschutz was named the most important person in soccer in the United States by SportsBusiness Journal.

Anschutz has been involved with a number of other businesses, including Forest Oil, Pacific Energy Group, Union Pacific Railroad (in which he is the largest stakeholder, with a 6% stake), and Regal Entertainment Group, the world’s second-largest movie theatre chain, with approximately 7,000 screens. Anschutz owns more than half of the corporation, as well as several newspapers and media companies.

Anschutz, a fervent Christian, is well-known for his contributions to conservative political organizations as well as his generosity, most notably to the University of Colorado, which bears his name with the Anschutz Medical Campus.

Anschutz also has a strong affinity for the American West; his collection of Western art, widely regarded as one of the finest in the world, is on exhibit at the American Museum of Western Art in Denver.

“Take action. When you take action, you can create the outcome.” — Philip Anschutz 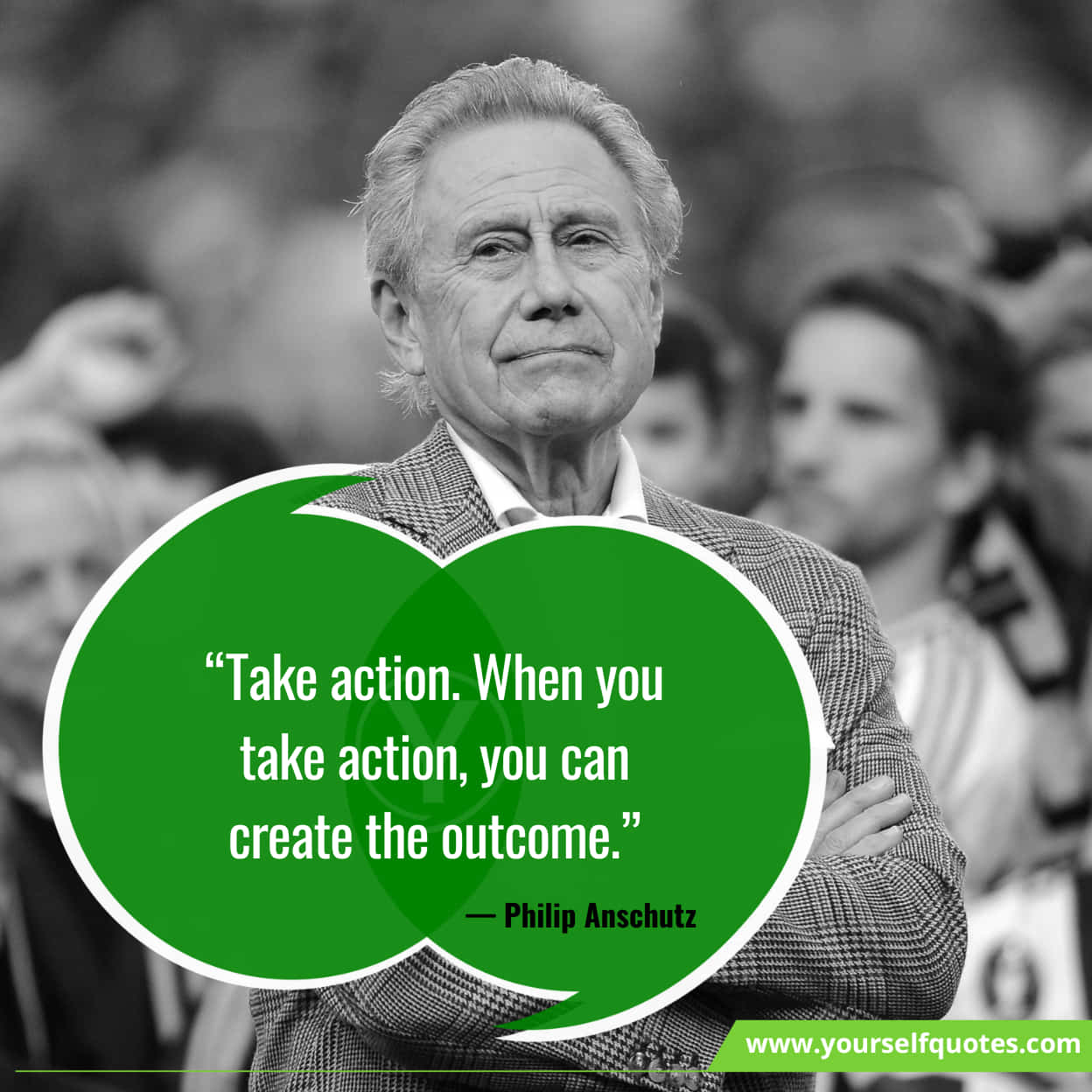 “I must have had an early leaning toward business. Not that I had an understanding of this when I was 10 years old, but when you see what can be done.” — Philip Anschutz

“The possibilities, you want to be involved in something. You want to own it.” — Philip Anschutz

“Hollywood as an industry can at times be insular and doesn’t understand the market very well. I saw an opportunity in that fact.” — Philip Anschutz

“We will continue to set the standards in the industries in which AEG operates.” — Philip Anschutz

“It doesn’t do any good to sit on the sidelines all the time.” — Philip Anschutz 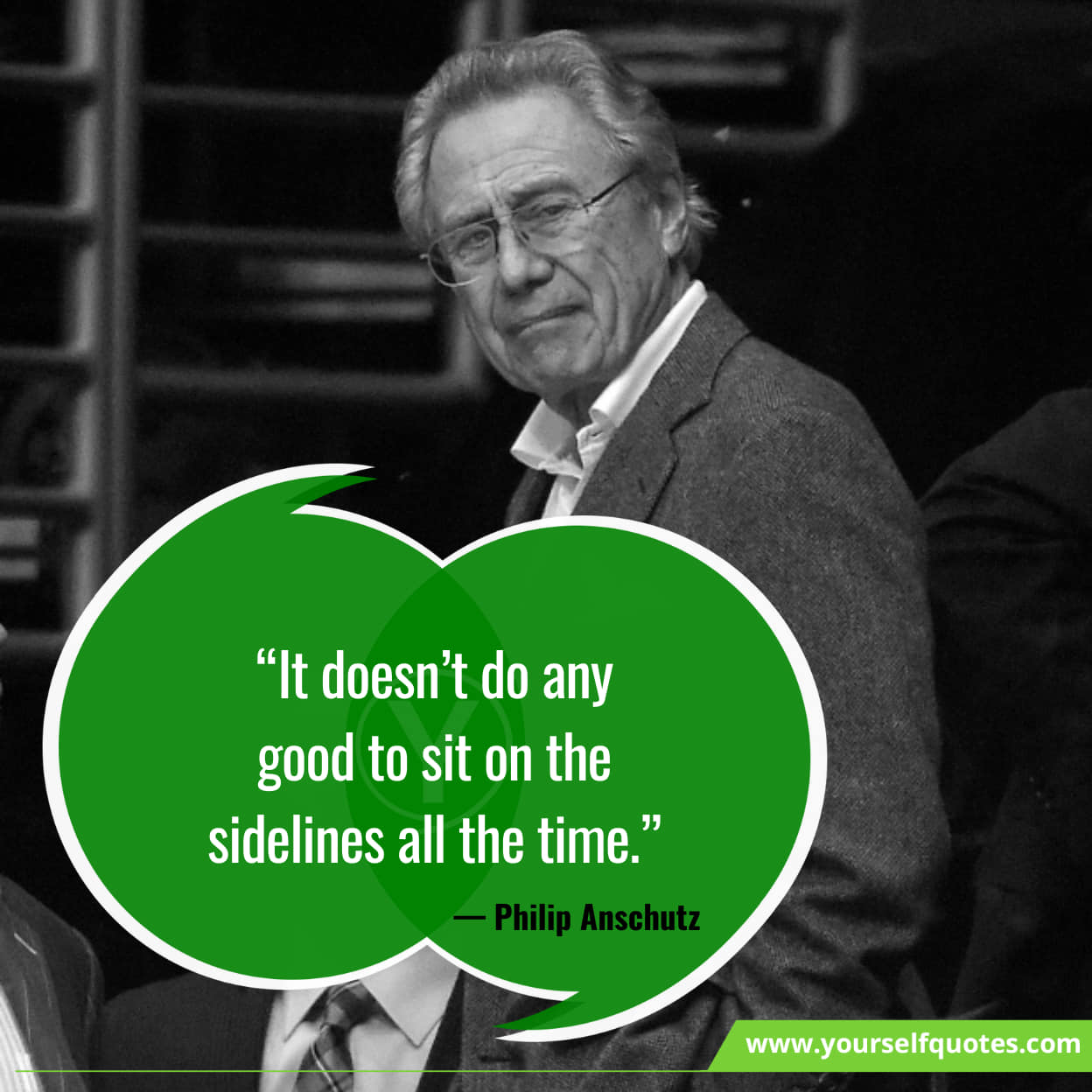 “Bringing our unique vision and development model to entertainment locations throughout the world.” — Philip Anschutz

“We do not tolerate discrimination in any form.” — Philip Anschutz

“People want to do authentic things. They want to go horseback riding, fishing, shooting or searching for turtle nesting spots on the beach.” — Philip Anschutz

“In Denver, if you get a reputation for being too competitive, people don’t want to play with you or do business with you.” — Philip Anschutz

“Sexuality is among the most personal of issues, and it has never been my intent to weigh in on people’s private lives.” — Philip Anschutz 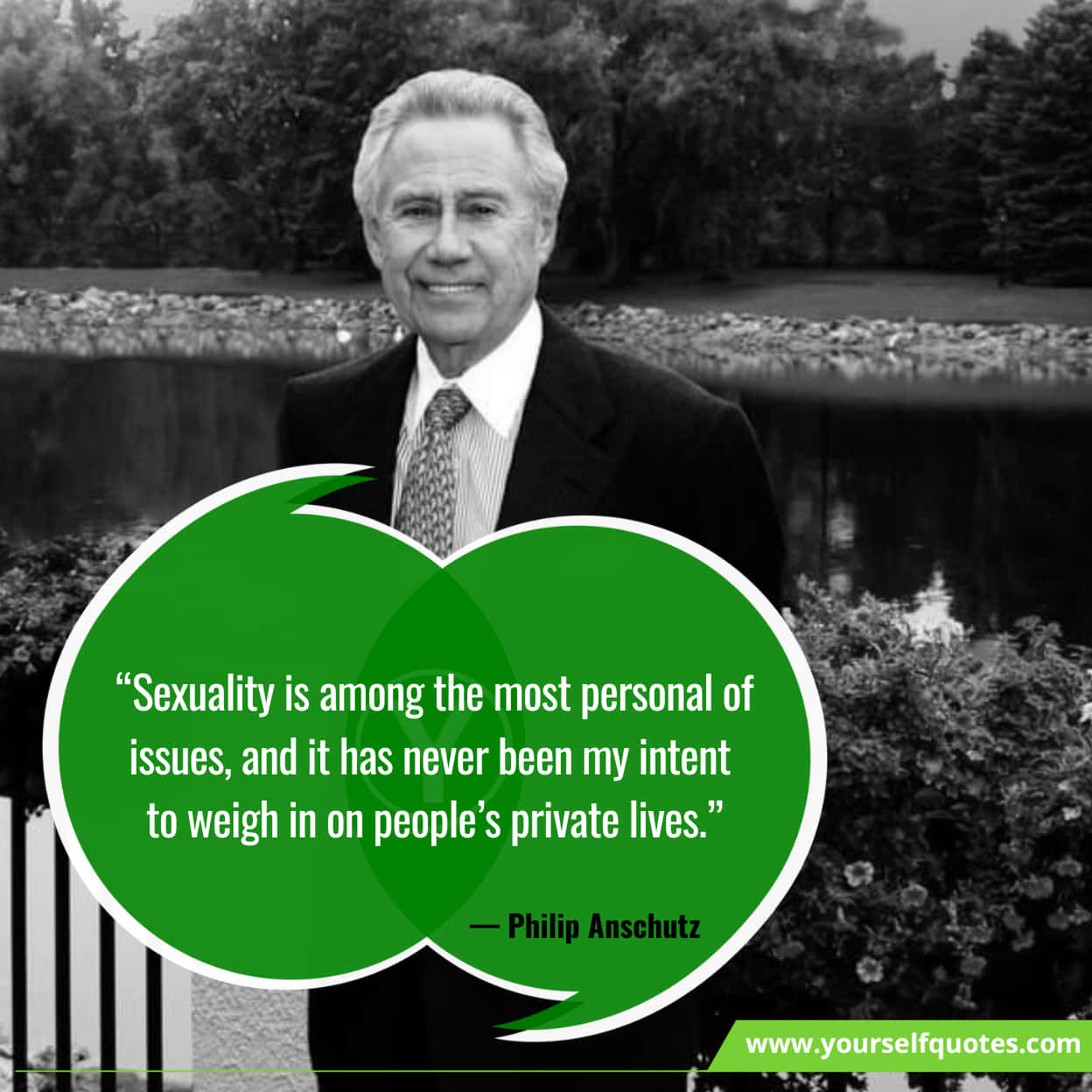 “Nothing communicates with the people who make real decisions in Hollywood like spending your own money and showing that you can make profitable films.” — Philip Anschutz

“There’s always a point that if you go forward you win, sometimes you win it all, and if you go back you lose everything.” — Philip Anschutz

“We are fortunate to employ a wealth of diverse individuals throughout our family of companies.” — Philip Anschutz

“All of whom are important to us – the only criteria on which they are judged is the quality of their job performance.” — Philip Anschutz 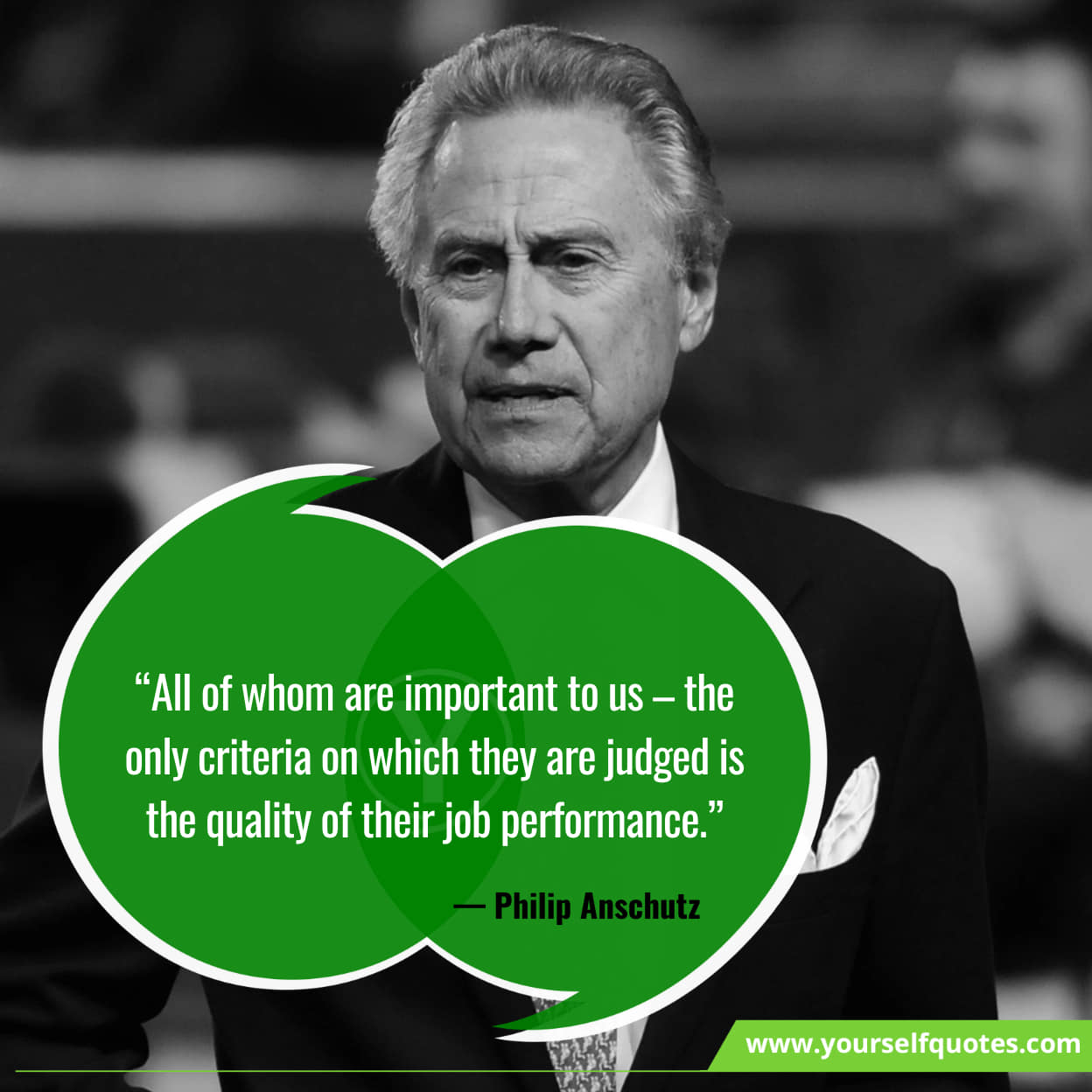 “Some of the early speculations I saw in the press was that I am a railfan. I’m not. This is not a hobby.” — Philip Anschutz

“This is a full-time business and a very serious one at that. We’re making this railroad work.” — Philip Anschutz

“Four or five years ago I decided to stop cursing the darkness – I had been complaining about movies.” — Philip Anschutz

“Furthermore, I don’t believe you have to be quite that competitive to compete effectively. Beyond a certain point, all that bearing down is self-defeating.” — Philip Anschutz

“It must operate at a profit. You can’t have any structure, especially not a long-term one, that does not have under it a firm financial foundation that can ensure its longevity.” — Philip Anschutz 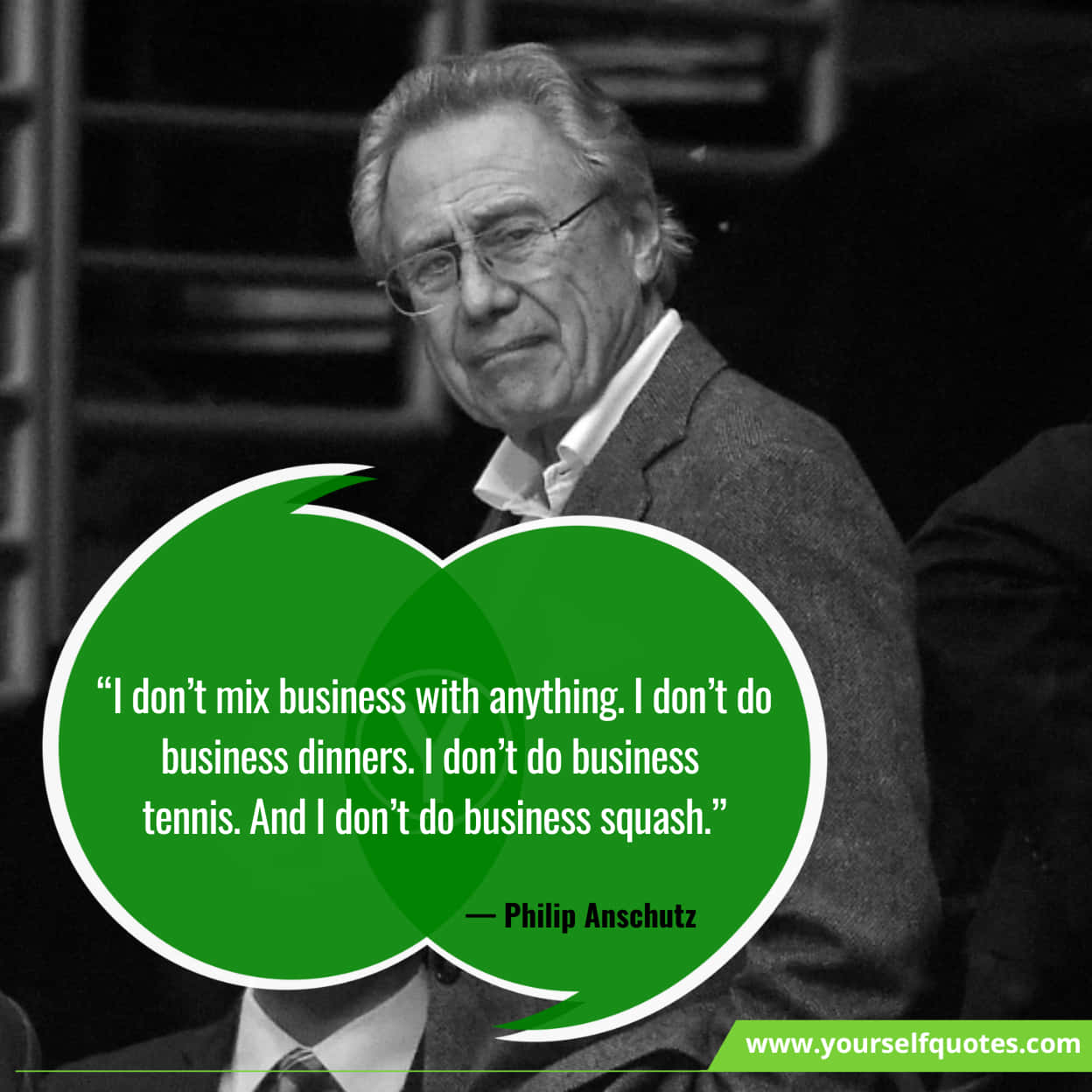 “Hardly a week goes by that I don’t get opportunities to buy a hotel.” — Philip Anschutz

“Properties like the Broadmoor diminish greatly in number over time.” — Philip Anschutz

“In New York, the expectation seems to be that everyone will play his absolute hardest, be ultra-competitive, and do anything necessary to win.” — Philip Anschutz

“Frankly, there are better things for me to invest in than these hotels. Stewards are really needed for these kinds of properties – instead of investors.” — Philip Anschutz

“I unequivocally support the rights of all people without regard to sexual orientation.” — Philip Anschutz 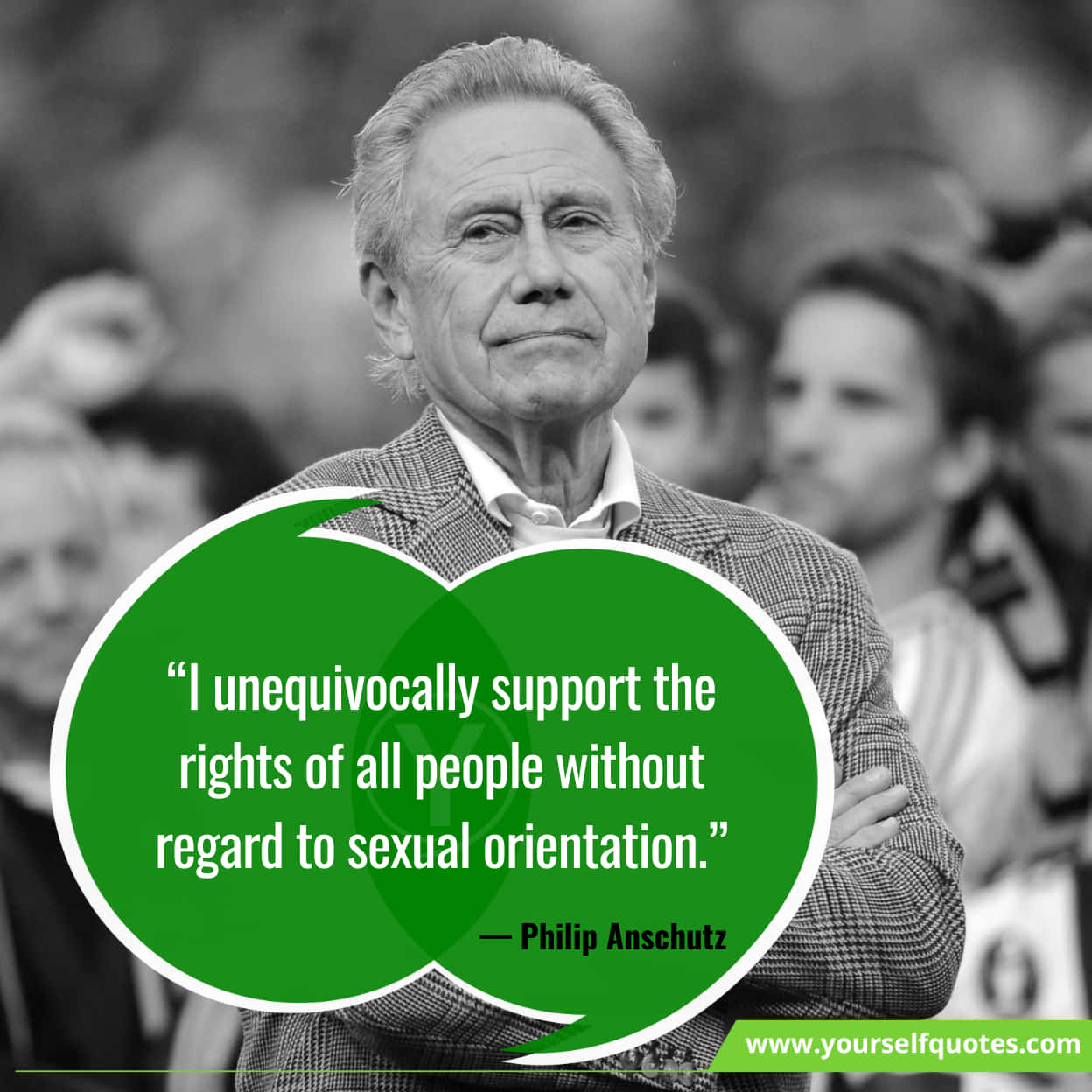 “Long a student and admirer of the American West, its history, its art, its culture, its cast of personalities.” — Philip Anschutz

“I’m aware that in the West a great confluence of events and people combined to create something unique in the annals of human history.” — Philip Anschutz

“Am I crazy? My opponents say I am, but I disagree.” — Philip Anschutz

“For America, the period of 1800 to 1920 was an unparalleled time of broad expansion and growth driven by extraordinary factors unlike almost any other in history.” — Philip Anschutz

“My reasons for getting into the entertainment business weren’t entirely selfless.” — Philip Anschutz 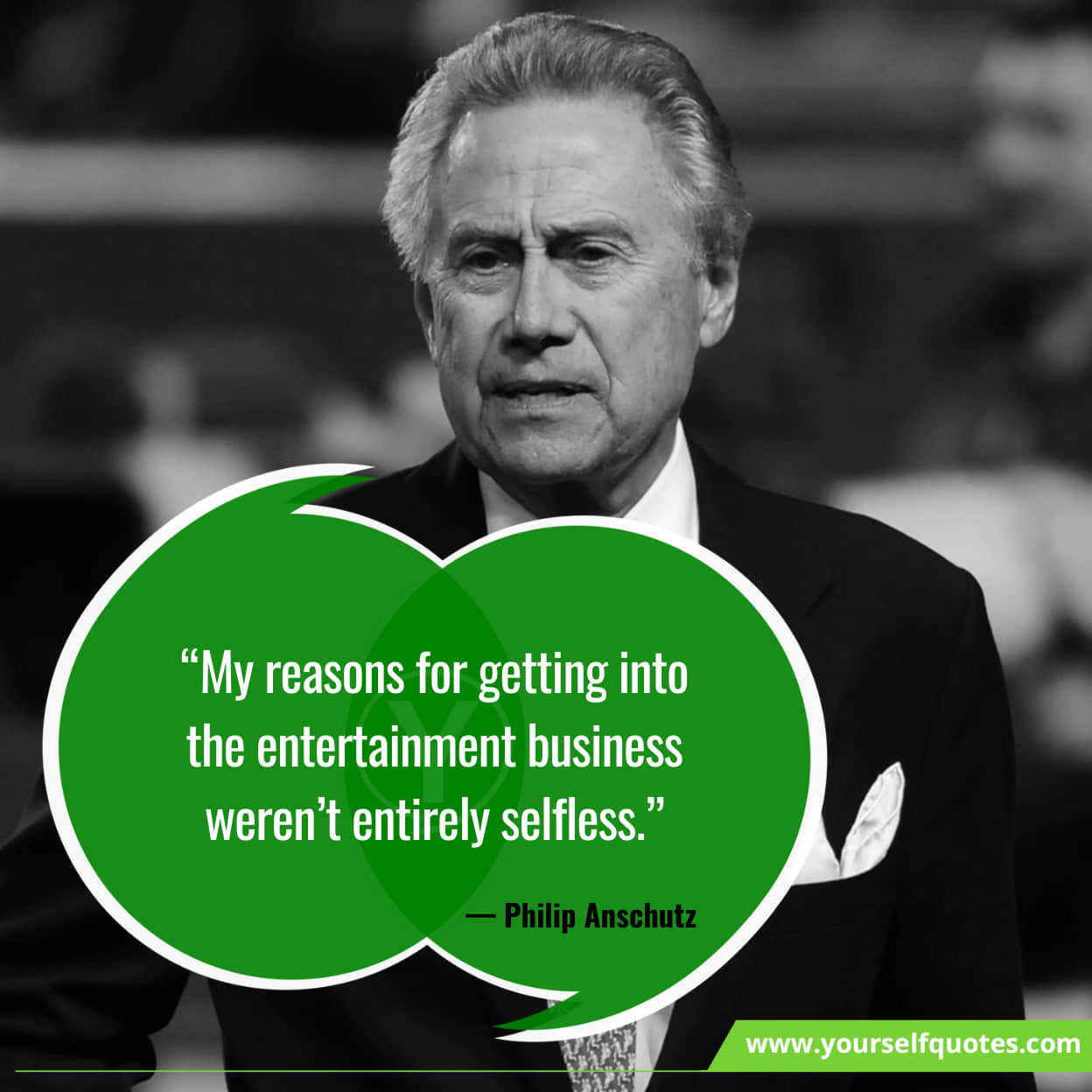 “They flourish best if owned by a family with the values of stewardship, as opposed to seeing them as just another asset.” — Philip Anschutz

“Adversity is a huge advantage – as long as you think of it as an advantage – because it helps you do things you never thought you were capable of doing.” — Philip Anschutz

“My gift to the Elton John Foundation is intended to emphasize that we support the freedom of all people to live their lives peacefully, without interference from others.” — Philip Anschutz

“All I have ever done in my life is work.” — Philip Anschutz

“I’m not in the practice of writing checks just for the fun of writing them.” — Philip Anschutz 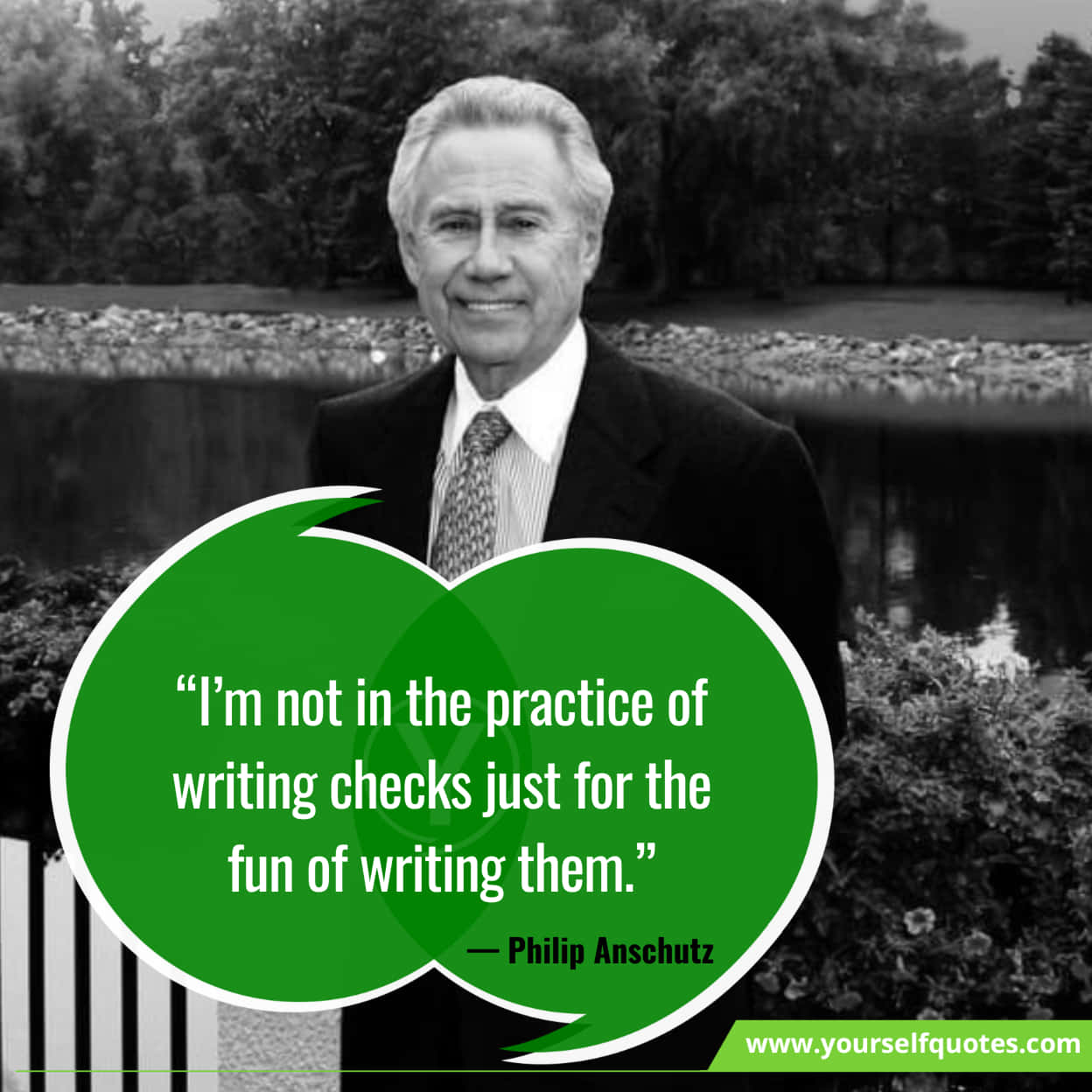 “I’ve been in the deal-making business for almost 50 years now. I’ve made a lot of them.” — Philip Anschutz

“My friends think I’m a candidate for a lobotomy, and my competitors think I’m naive or stupid or both. But you know what? I don’t care.” — Philip Anschutz

“I support the rights of all people and oppose discrimination and intolerance against the LGBTQ community. I see this as a matter of basic human rights.” — Philip Anschutz

“If you would have a faithful servant, and one that you like, serve yourself.” — Philip Anschutz 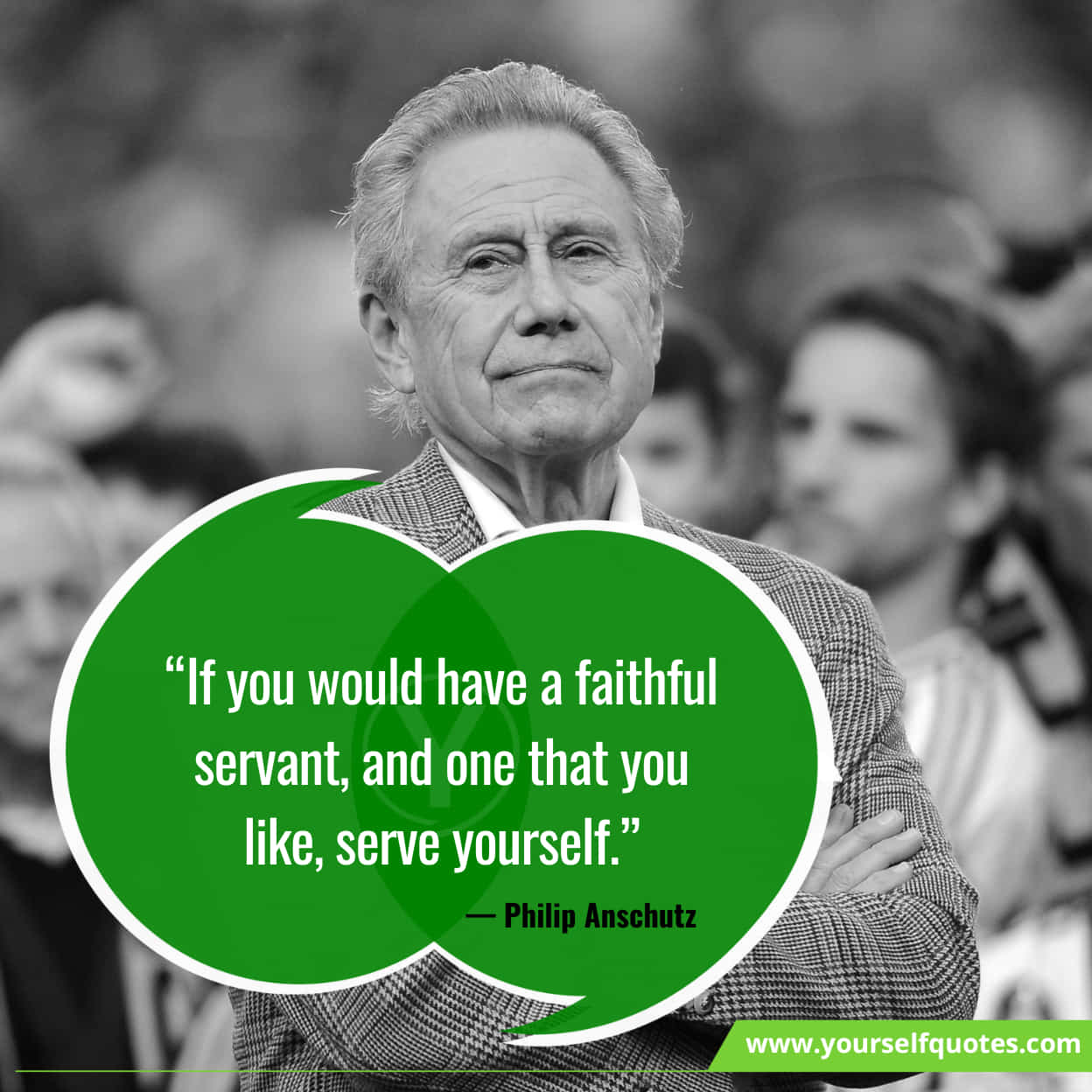 “A man may go to heaven with half the pains it cost him to purchase hell.” — Philip Anschutz

“There were some entrepreneurial du Ponts that are a little different from the heads of the corporations today.” — Philip Anschutz

“When I got involved with The Five Crowns who later became The Drifters, and we got this hit record, I still was looking at this as kind of a fun thing.” — Philip Anschutz

“If I have a reputation for anything, it’s for keeping a low profile.” — Philip Anschutz

“Both The Anschutz Foundation and I contribute to numerous organizations that pursue a wide range of causes.” — Philip Anschutz

“If we can make some movies that have a positive effect on people’s lives and on our culture, that’s enough for me.” — Philip Anschutz

“An isolated pawn spreads gloom all over the chessboard.” — Philip Anschutz

“How to base a thing it is when a man will struggle with necessity! We have to die.” — Philip Anschutz

“Cherish every moment with those you love at every stage of your journey.” — Philip Anschutz 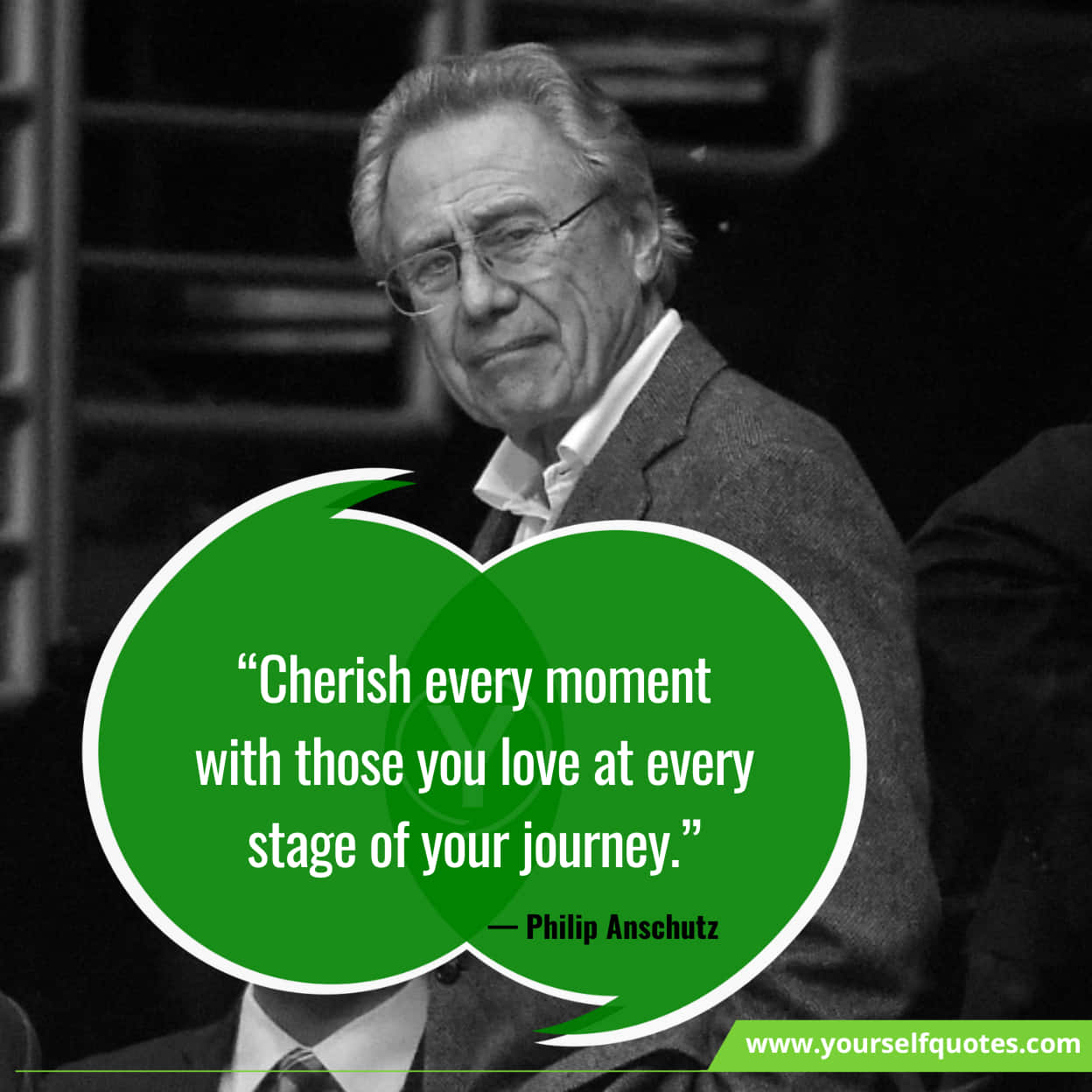 Philip Anschutz (1939–) is a Denver-based businessman and the state’s wealthiest individual, with an estimated net worth of more than $10 billion.

For his success across a wide range of businesses—oil and gas, railways, telecommunications, sports, and entertainment—he has drawn comparisons to Gilded Age banker J. P. Morgan, as has Warren Buffett for his relatively modest lifestyle.

His most well-known company today is Anschutz Entertainment Group (AEG), which owns arenas, sports teams, and music festivals all over the world. Anschutz’s Colorado holdings include the Broadmoor, the Colorado Springs Gazette, and the Denver Gazette newspapers, as well as the sixty-square-mile Eagles Nest Ranch east of Greeley.

Thank you for reading this collection of Philip Anschutz Quotes! Don’t forget to share them with your friends and family on social media.

Which are your favorite Philip Anschutz Quotes? Leave a comment below.

Friedrich Nietzsche Quotes That Will Ignite Your Mind