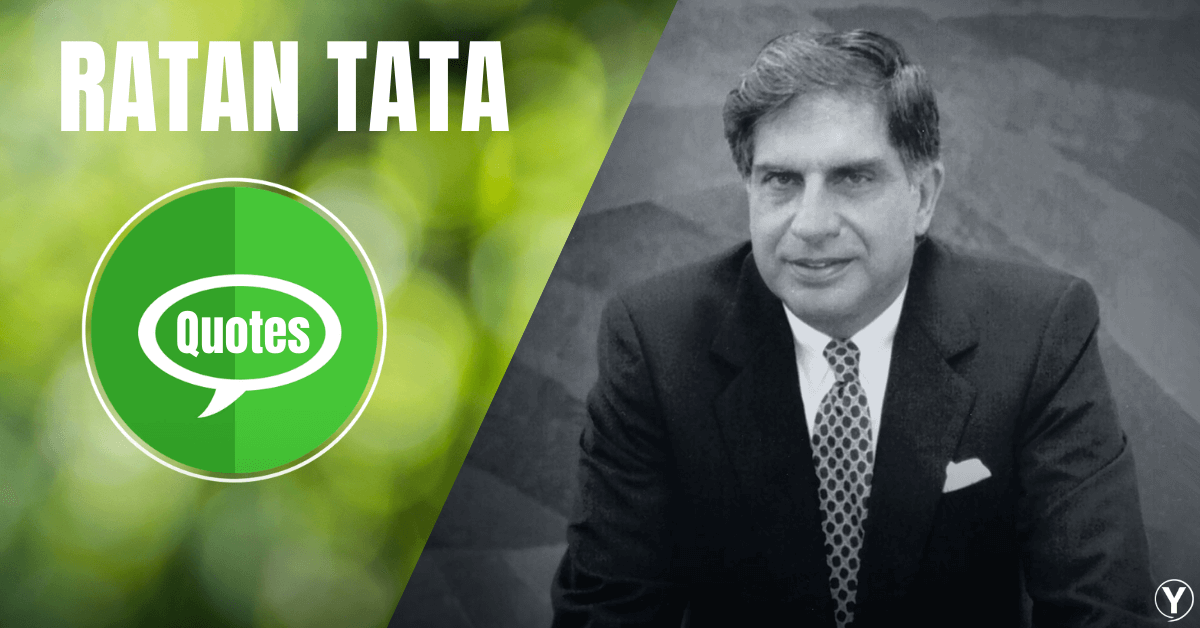 Ratan Tata, full name Ratan Naval Tata is a leading Indian industrialist. Apart from being a famous industrialist, he is a great investor, philanthropist, and former chairman of Tata Sons who served as its Chairman Emeritus. He was also the former Chairman of Tata Group from 1990 to 2014 and again served as an interim Chairman from October 2016 through February 2017. Currently, he is heading charitable trusts.

Ratan Tata Family: Mr. Tata was born to Naval Tata and Sonoo. He has a half-brother, Noel Tata (from Naval Tata’s second marriage with Simone Tata), with whom he was raised.

Ratan Tata was a scion of the Tata Family. He was the beloved great-grandson of Jamsetji Tata, the founder of Tata Group. He pursued his studies in B. Arch. degree in Architecture with Structural Engineering from Cornell University. After that, he entered his family business. Under his leadership, the company grew up to new heights. During the 21 years of his business journey, he led the Tata Group ahead, revenues grew over 40 times, and profit, over 50 times.

Mr. Tata is a strong supporter and believer in education, medicine, and rural development. And these qualities distinguished him as a leading philanthropist in India. He supported the University of New South Wales, Faculty of Engineering to develop capacitive deionization to provide improved water for challenged areas. Under his leadership, MIT Tata Center of Technology and Design at Massachusetts Institute of Technology was formed with a mission to address the challenges of resource-constrained communities, with an initial focus on India. He worked with a mission in mind o turn Tata from a largely India-centric group into a global business.

Now let’s catch an eye on the most inspiring Ratan Tata Quotes that will transform your mind into the best.

“Young entrepreneurs will make a difference in the Indian ecosystem.” — Ratan Tata

“I don’t believe in taking right decisions, I take decisions and then make them right.” — Ratan Tata 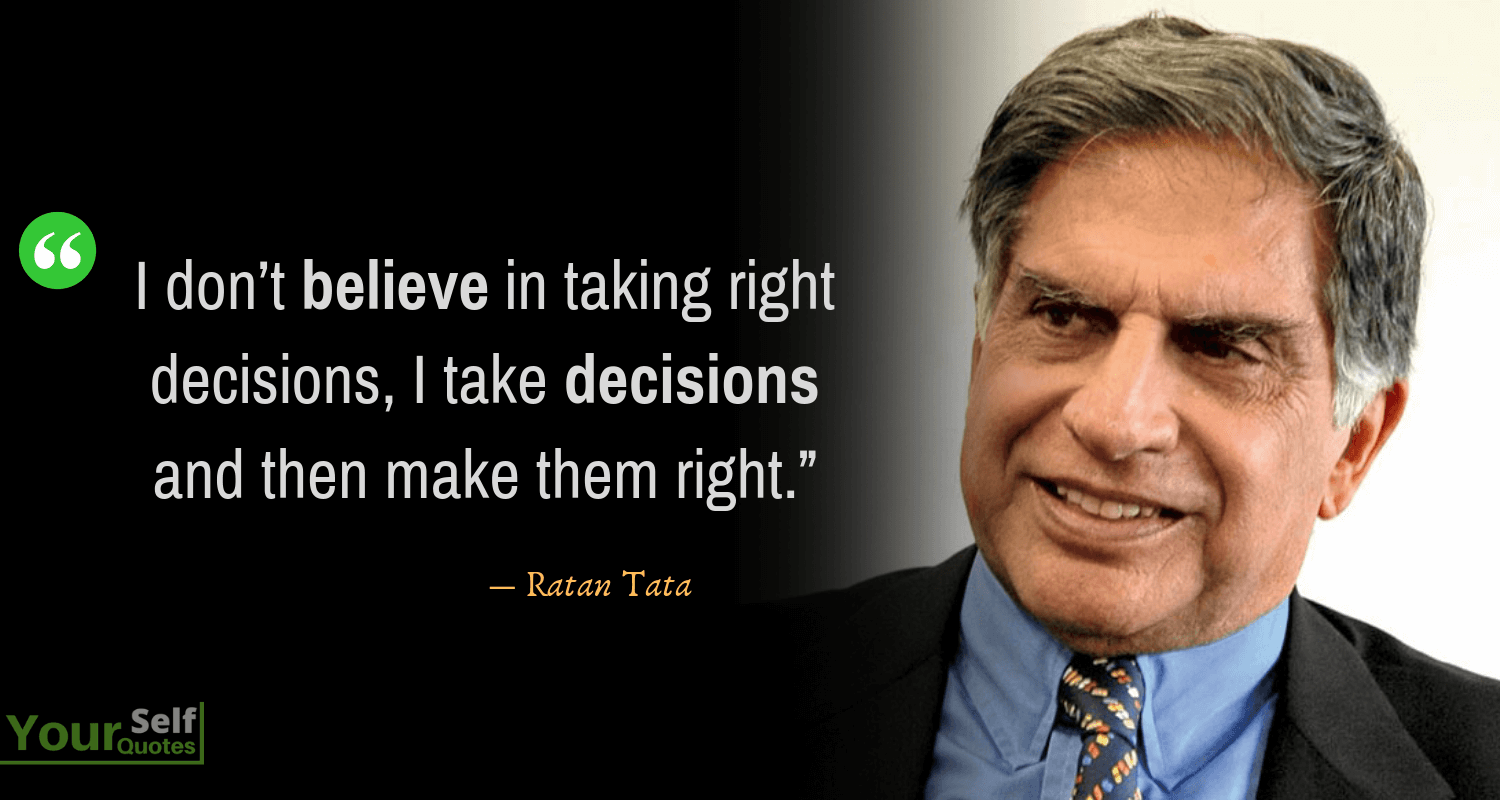 “Polish you talents like you would polish your diamonds.” — Ratan Tata 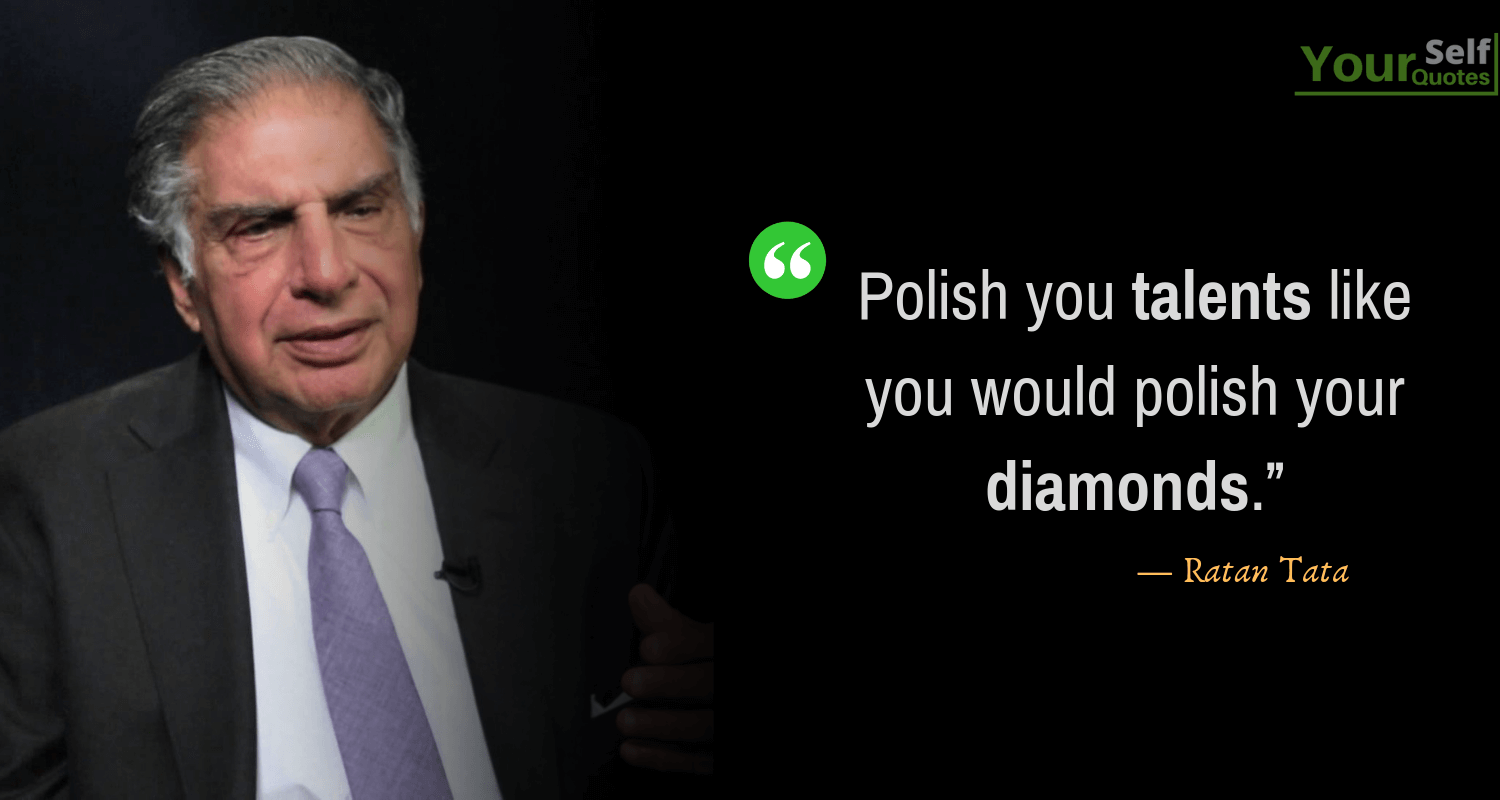 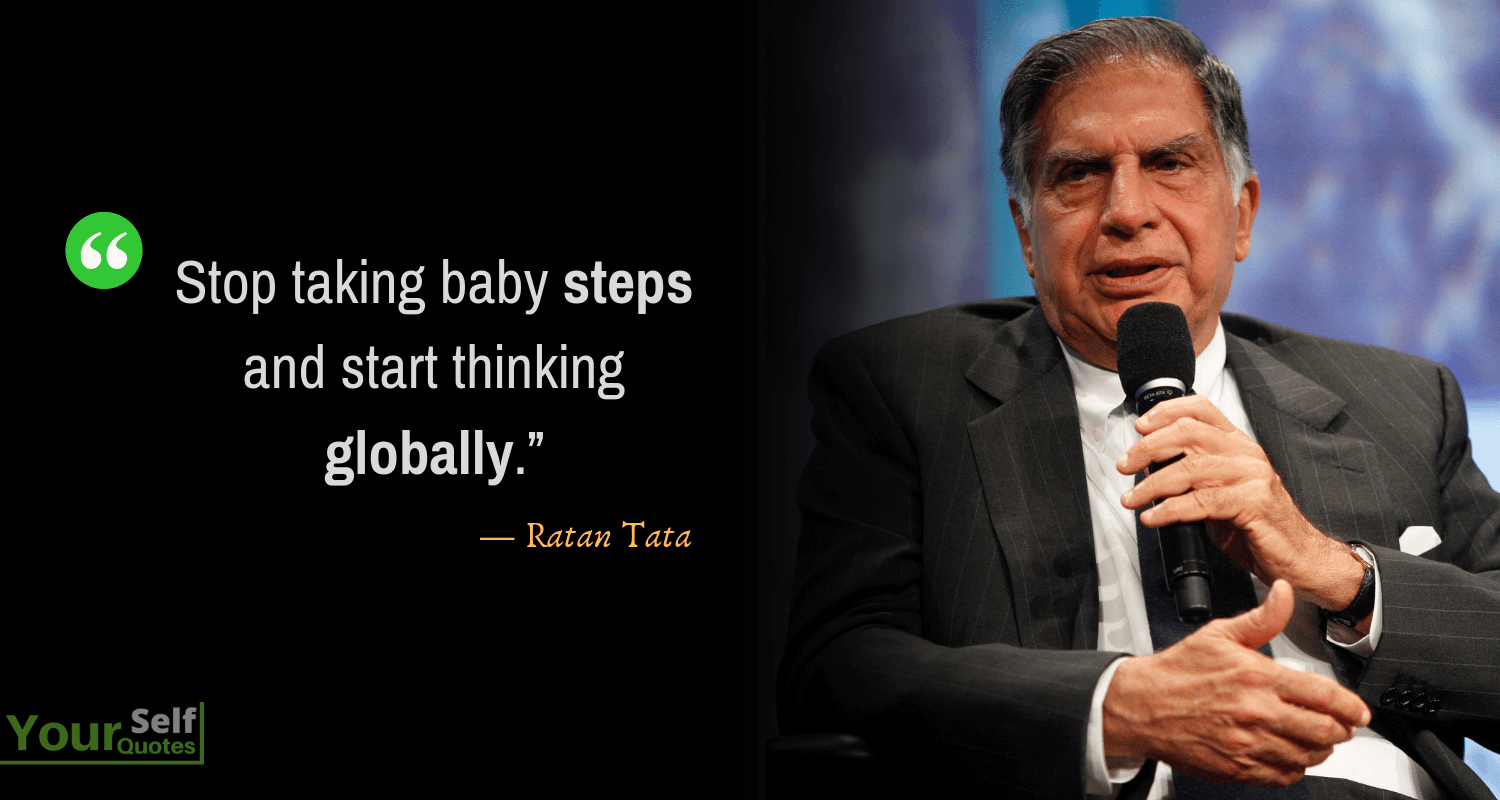 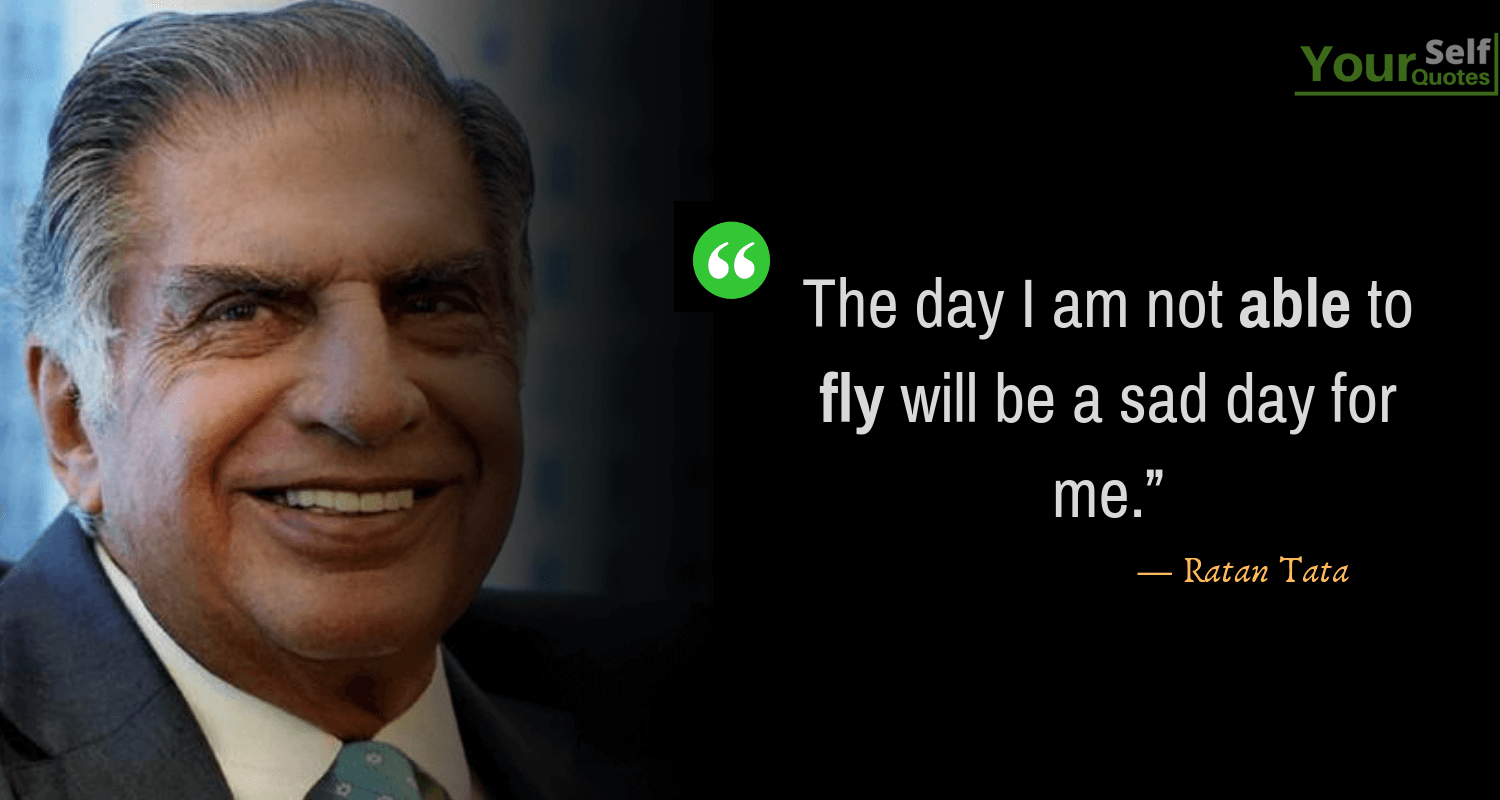 “Take the stones people to throw at you, and use them to build a monument.” — Ratan Tata 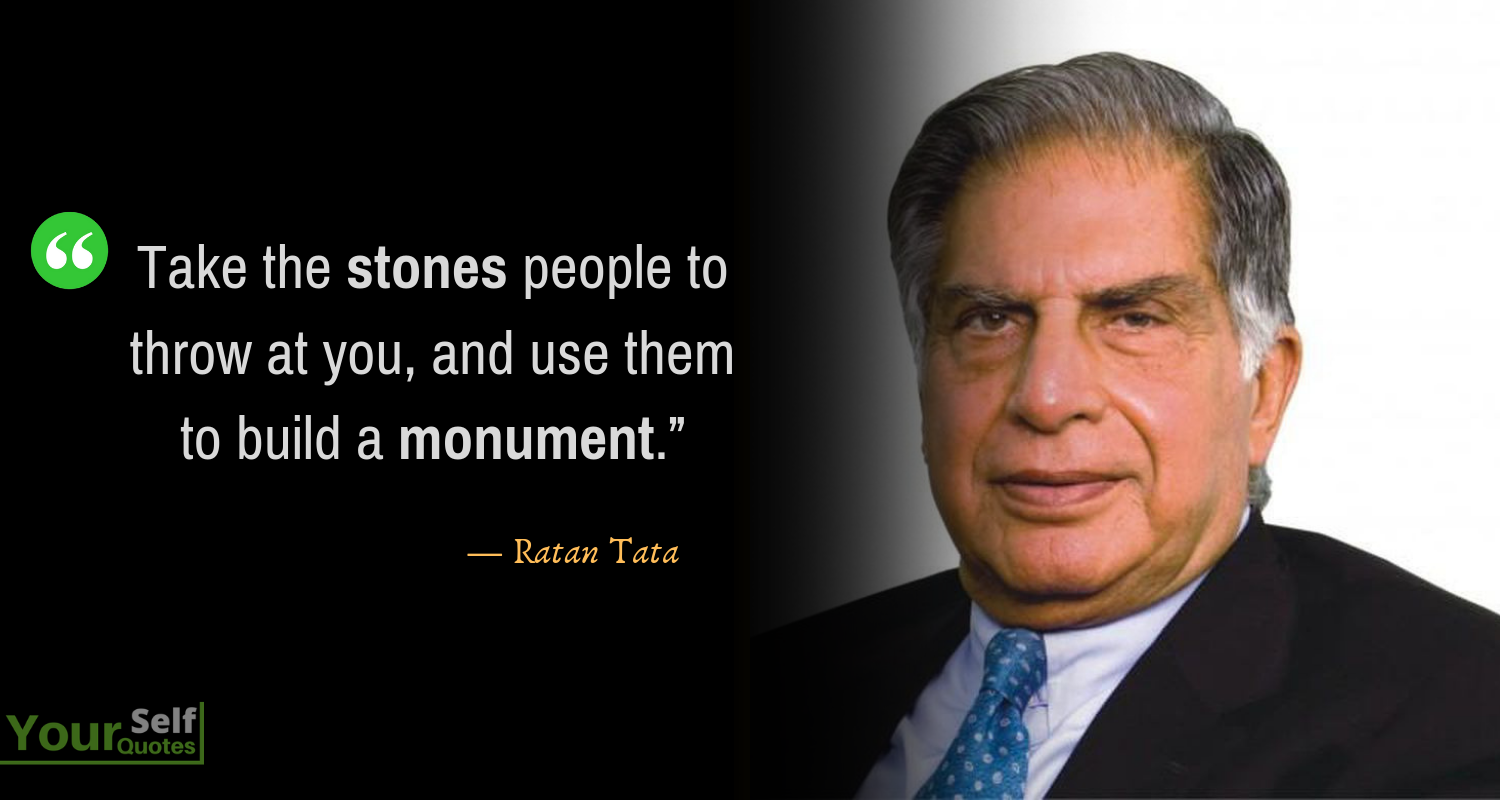 “All of us do not have equal talents. Yet, all of us have an equal opportunity to develop our talents.” — Ratan Tata 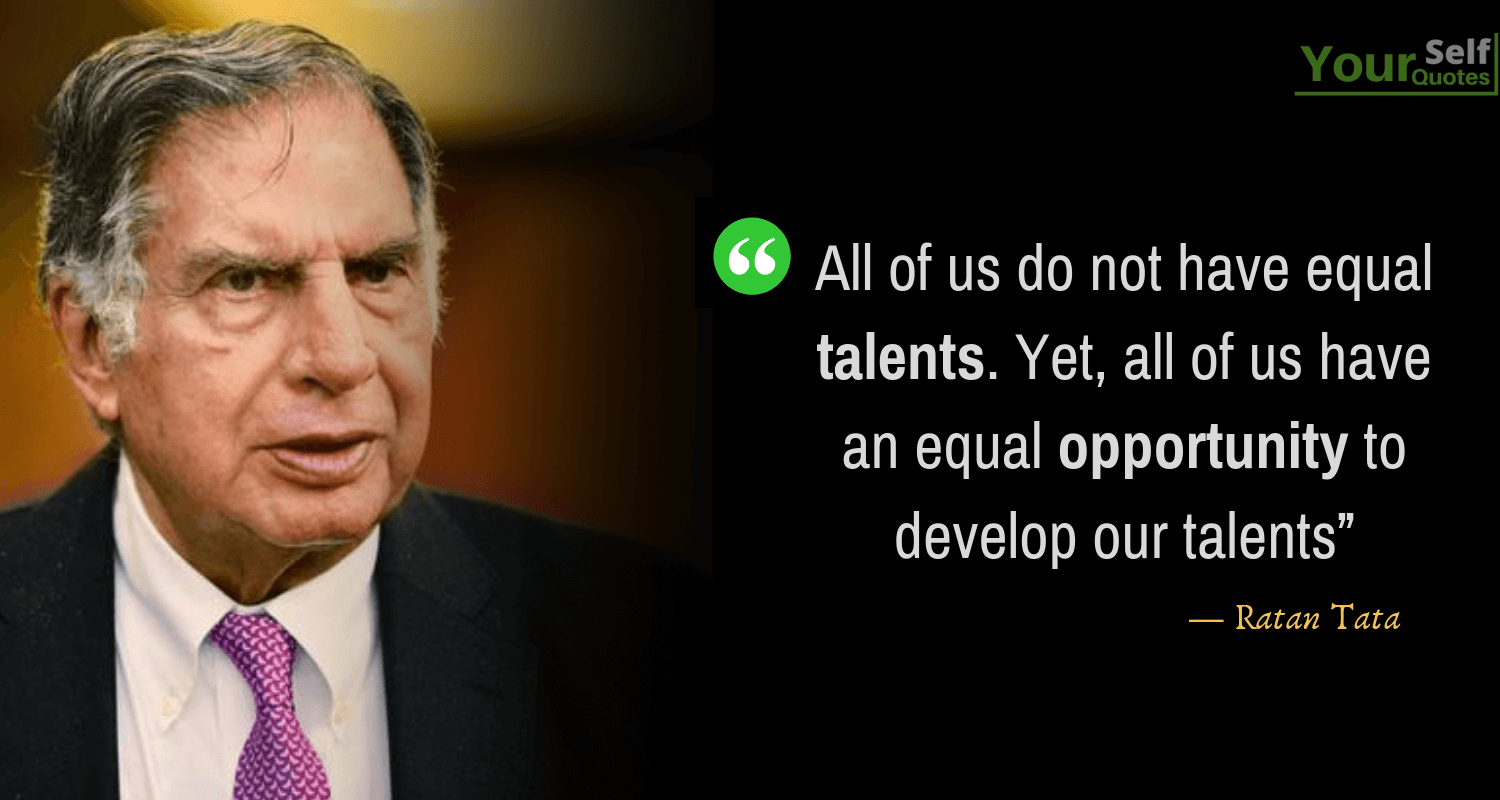 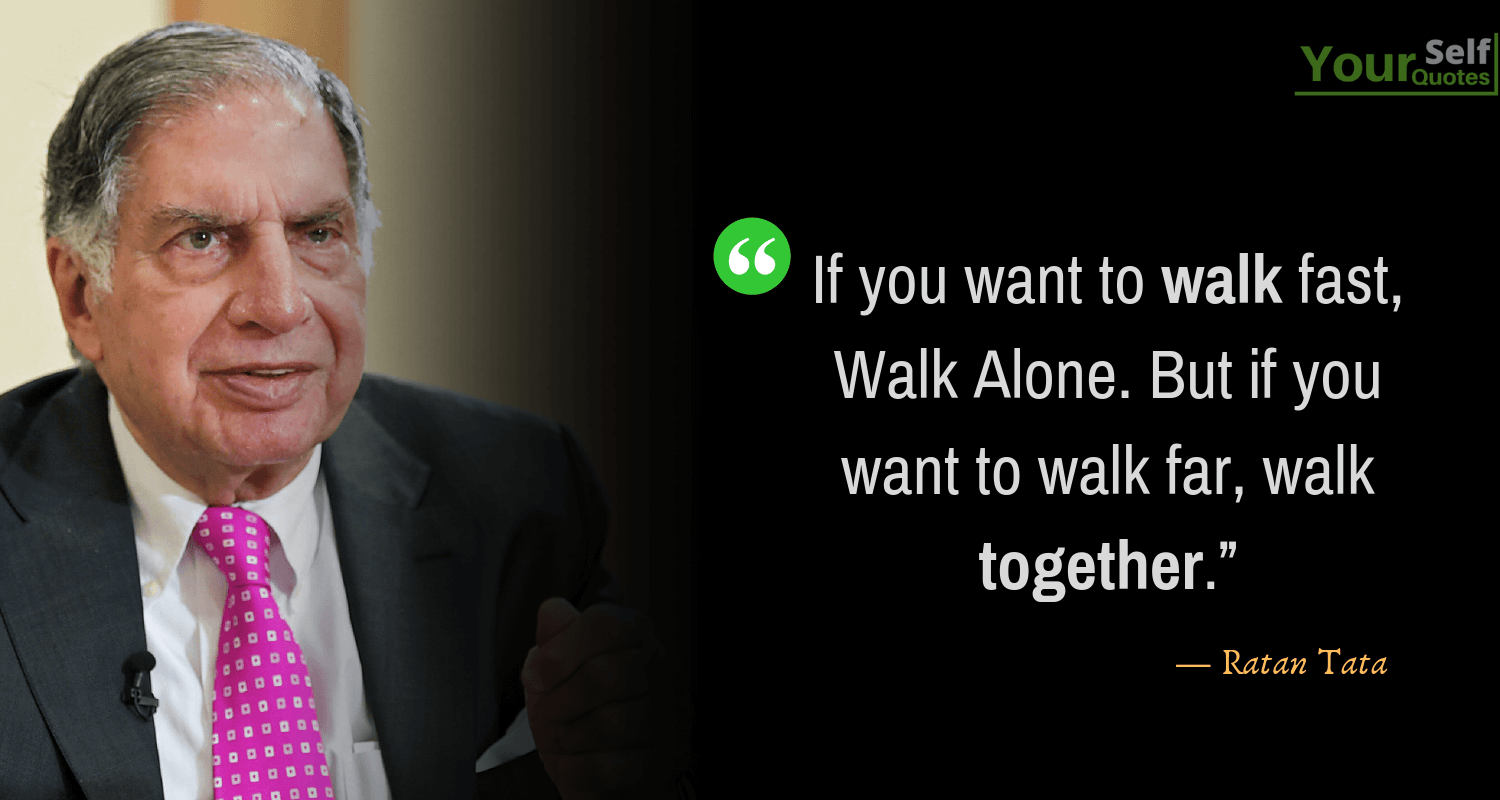 “Business need to go beyond the interest of their companies to the communities they serve.” — Ratan Tata

“I will certainly not join politics. I would like to be remembered as a clean businessman who has not partaken in any twists and turns beneath the surface, and one who has been reasonably successful.” — Ratan Tata

“What I would like to do is to leave behind a sustainable entity of a set of companies that operate in an exemplary manner in terms of ethics, values and continue what our ancestors left behind.” — Ratan Tata

“I would say that one of the things I wish I could do differently would be to be more outgoing.” — Ratan Tata 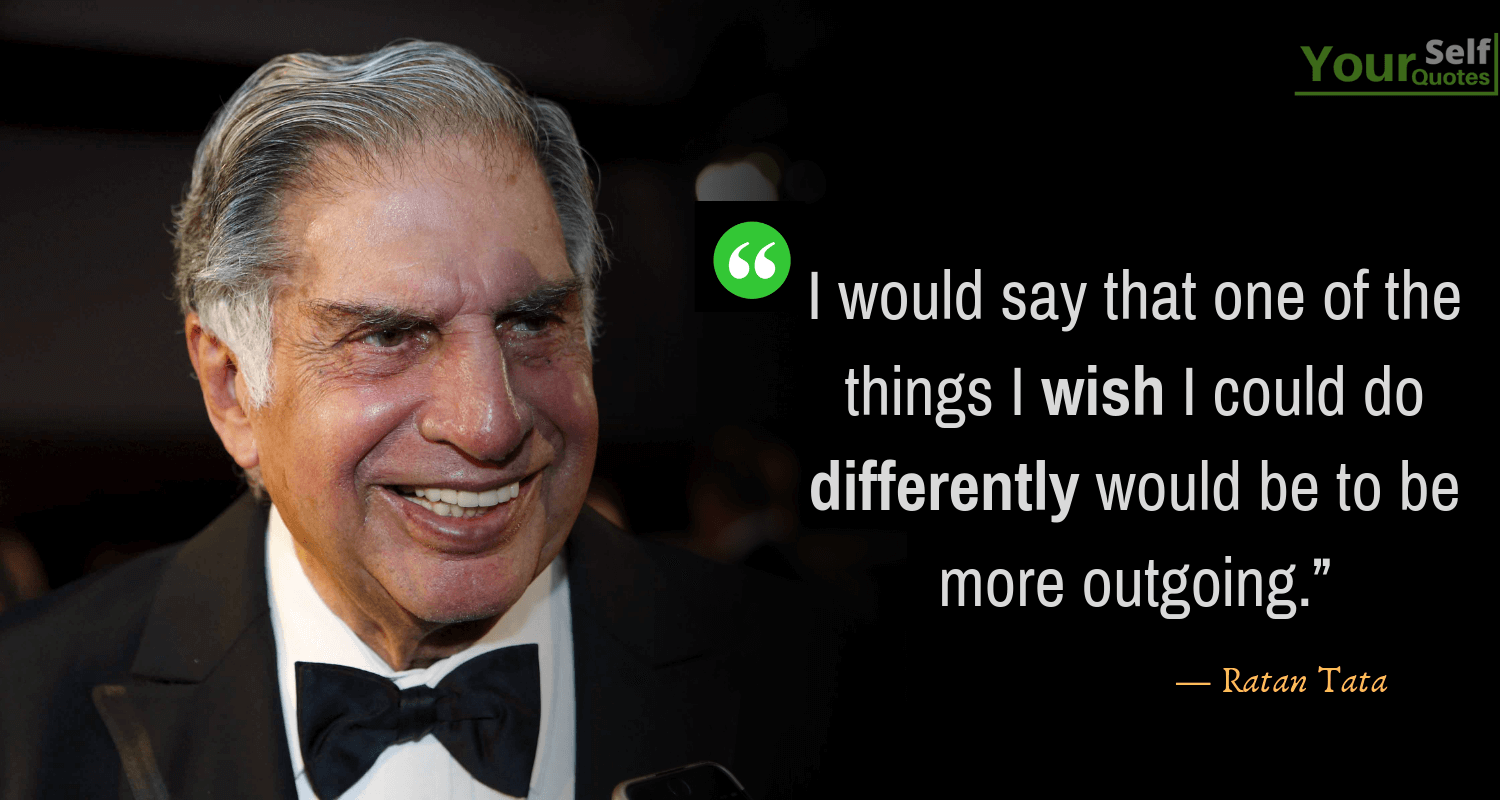 “I admire people who are very successful. But if that success has been achieved through too much ruthlessness, then I may admire that person, but I can’t respect him.” — Ratan Tata 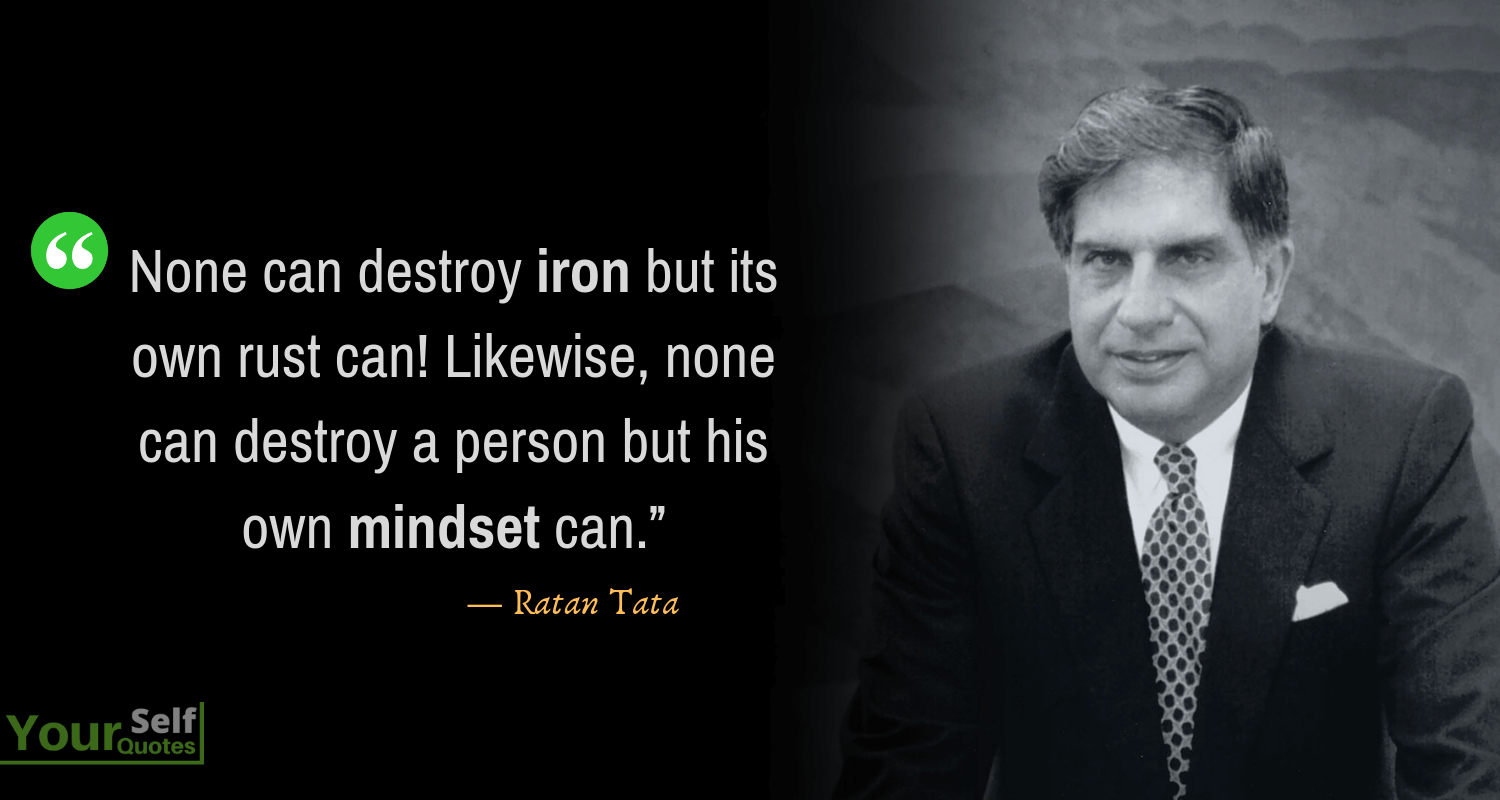 “Ups and downs in life are very important to keep us going, because a straight line even in an E.C.G. means we are not alive.” — Ratan Tata 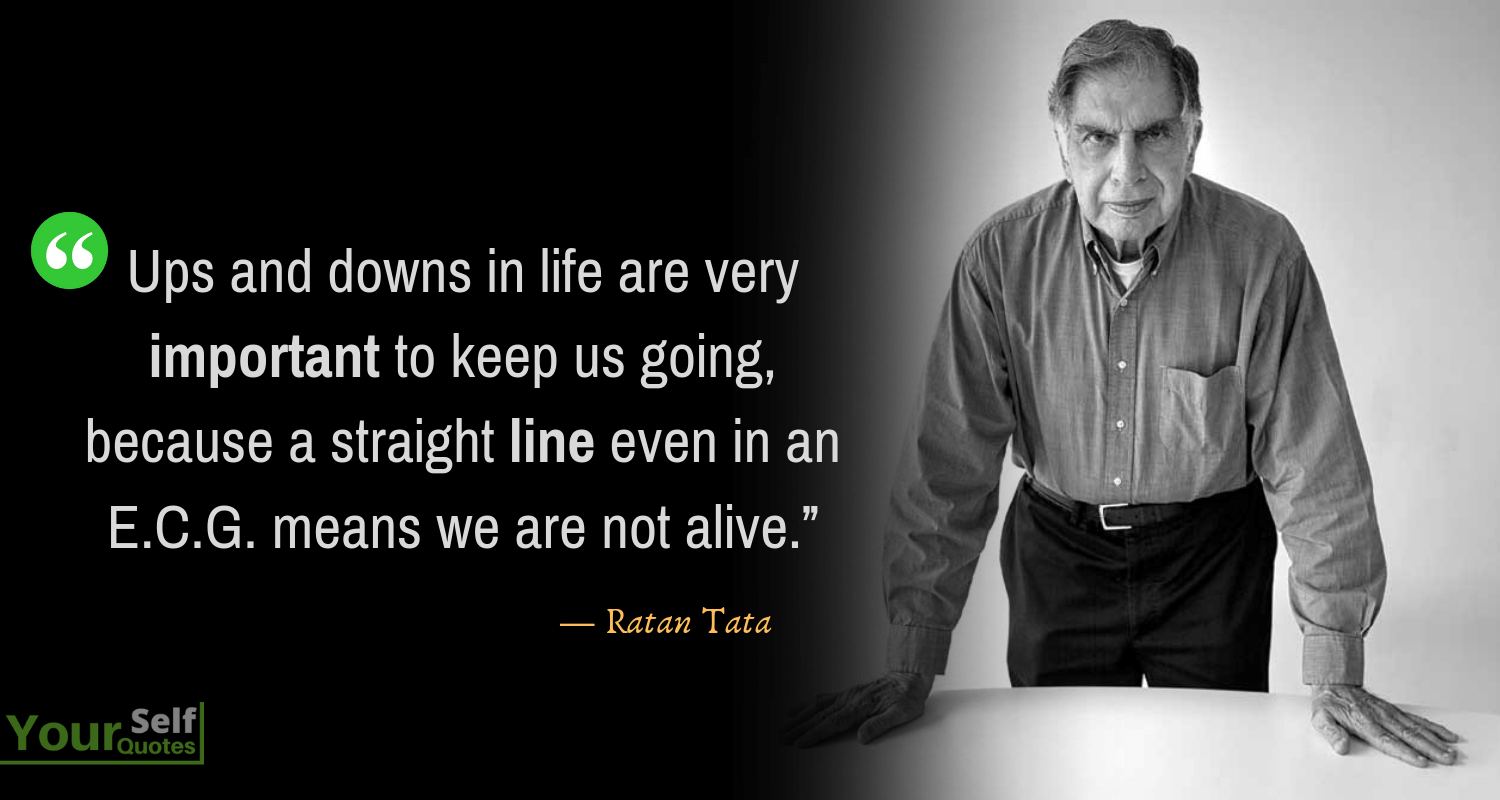 “I am proud of my country. But we need to unite to make a unified India, free of communism and casteism. We need to build India into a land of equal opportunity for all. We can be a truly great nation if we set our sights high and deliver to the people the fruits of continued growth, prosperity and equal opportunity.” — Ratan Tata

“The strong live and the weak die. There is some bloodshed, and out of it emerges a much leaner industry, which tends to survive.” — Ratan Tata 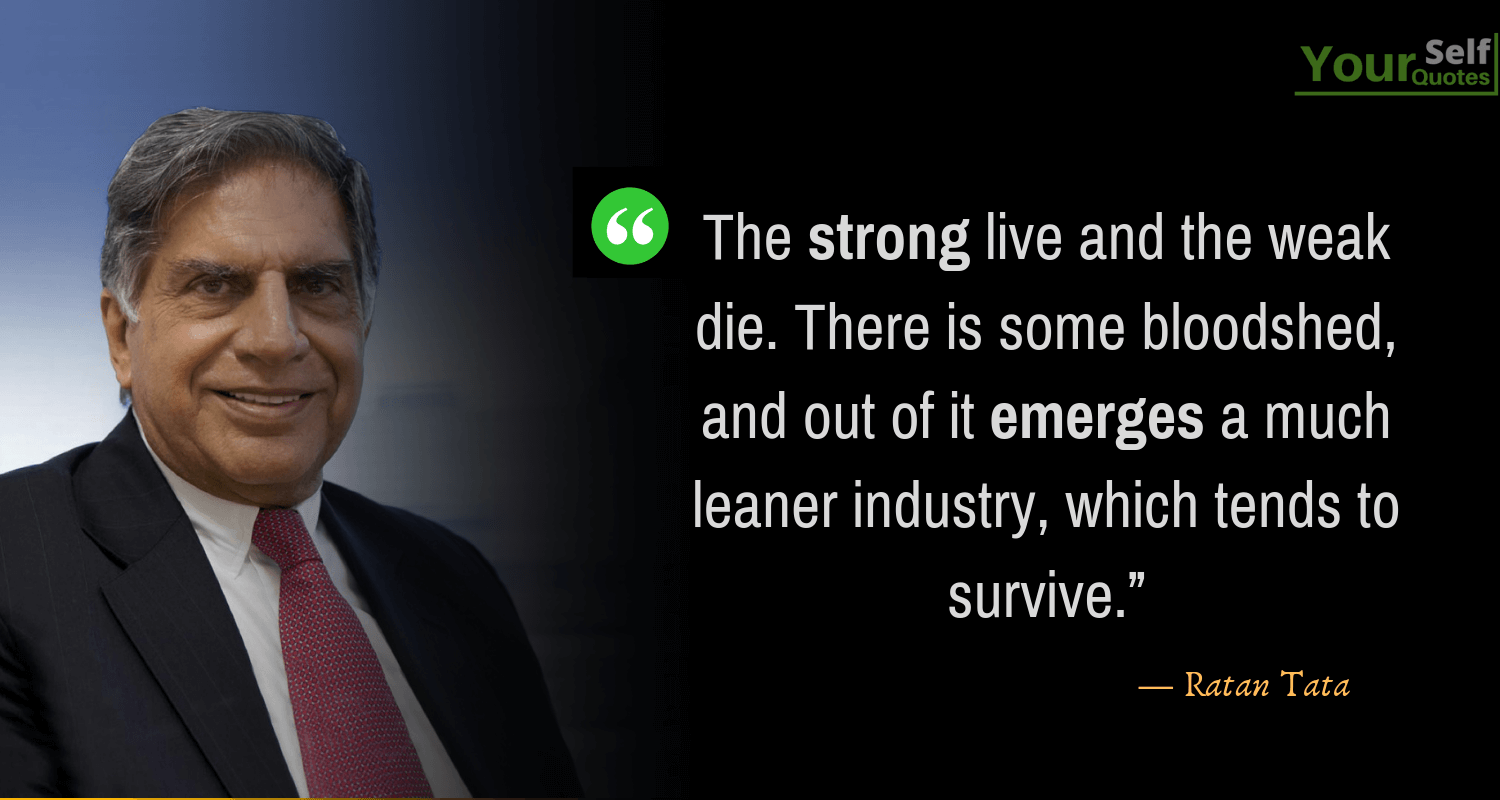 “I have also made this a point in our company: We need to stop taking baby steps and start thinking globally. It really seems to be helping.” — Ratan Tata 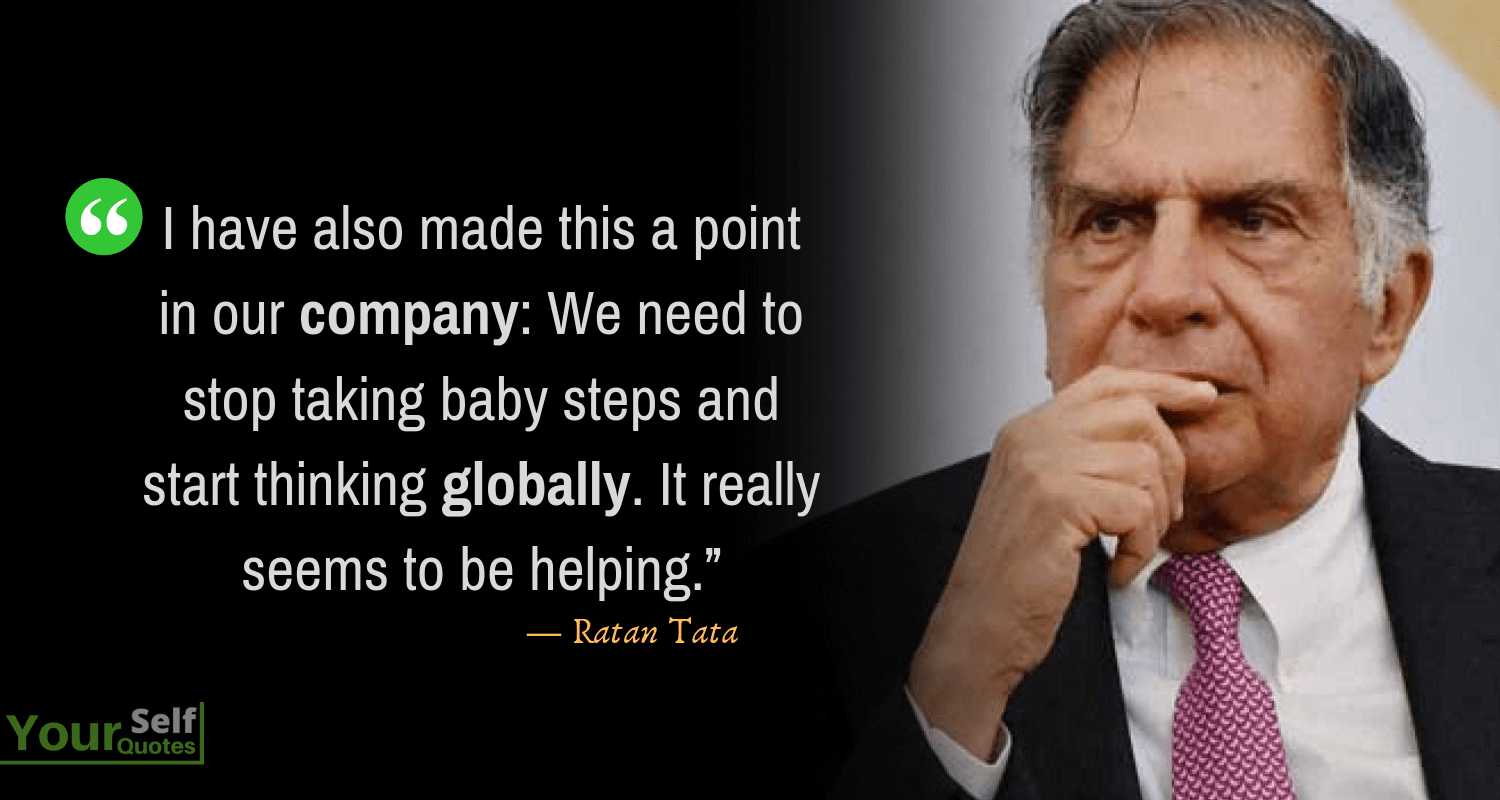 “We live in a highly competitive world – and we Indians have to struggle to catch up. So modesty is necessary, even if there is also a need for a certain amount of national pride. When it comes down to it, we have managed our country’s economy poorly for long enough. There is really no reason to now think that we can conquer the world.” — Ratan Tata

“One of the weaknesses of the Indian industry is that in many areas.. like consumer goods.. it is very fragmented. Individually, companies might not be able to survive. What is needed is a consortium of like companies in one industry, presenting a strong front to the multinationals. The Swiss watch industry did this.” — Ratan Tata

Ratan Tata is known for his business ethics and philanthropy. He is not just a business tycoon, he is much more than that. This great personality is a famous Philanthropist, the visionary living legend, and a generous soul. The man is the recipient of two of the highest civilian awards of India – Padma Vibhushan (2008) and Padma Bhushan (2000). From the world of business to the world of wisdom words, Mr. Ratan Tata ruled the world.

Ratan Tata’s Net Worth:- By the present capitalization of Tata Group, of about $100 billion, Ratan Tata’s net worth comes out to be about $830 million.

This great personality will always impress you with his business mind and inspiring words of wisdom. If you are really impressed by Ratan Tata Quotes Images do share them with your loved ones and friends to make a great difference.