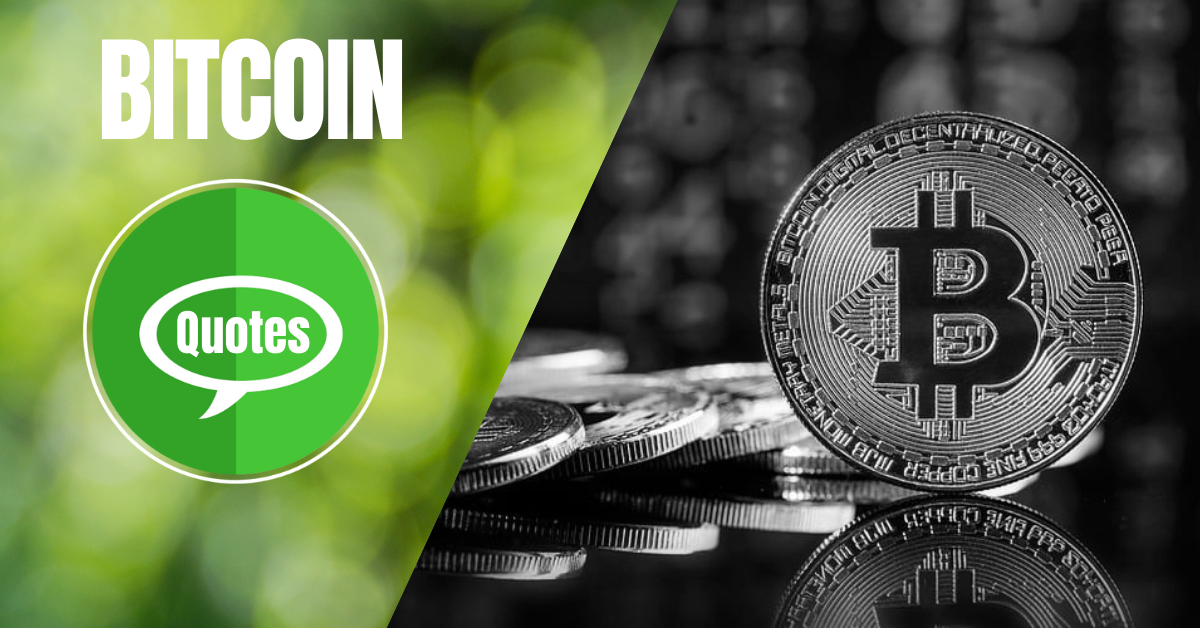 Bitcoin is a decentralized digital currency that can be sent from user to user on the peer-to-peer bitcoin network without the use of intermediaries. It has no central bank or single administrator. Network nodes use cryptography to verify transactions, which are then recorded in a public distributed ledger called a blockchain. Know more about this virtual currency. Read now. Bitcoin Quotes, Crypto Quotes, Cryptocurrency Quotes

Satoshi Nakamoto, a pseudonym for an unknown person or group of people, created the cryptocurrency in 2008. When the currency’s implementation was released as open-source software in 2009, it was put into use.

What Is Bitcoin? How Does It Work?

Bitcoin is classified as a cryptocurrency because it is protected by cryptography. There are no physical bitcoins; instead, balances are kept on a public ledger that anyone can see (although each record is encrypted). A massive amount of computing power is used to verify all Bitcoin transactions, a process known as “mining.”

Bitcoin isn’t issued or backed by any banks or governments, and it’s not worth much as a commodity. Despite the fact that Bitcoin is not legal tender in most parts of the world, it is extremely popular and has sparked the creation of hundreds of other cryptocurrencies known as altcoins. When Bitcoin is traded, it is commonly abbreviated as BTC.

How does Bitcoin work?

Each Bitcoin is primarily a computer file that is stored on a smartphone or computer in a ‘digital wallet’ app. Bitcoins (or parts of Bitcoins) can be sent to your digital wallet, and you can send Bitcoins to others. Every transaction is recorded in the blockchain, which is a public ledger. This allows users to track the history of their Bitcoins, preventing them from spending coins they don’t own, copying transactions, or undoing them.

How to get Bitcoins?

Basically, there are 3 main ways in which you can get Bitcoins:

Why are Bitcoins so much in demand?

Other than money, we value gold and diamonds. Cocoa beans were used as currency by the Aztecs. People are willing to trade bitcoins for real goods and services, as well as cash.

Why do people want to invest in Bitcoin? 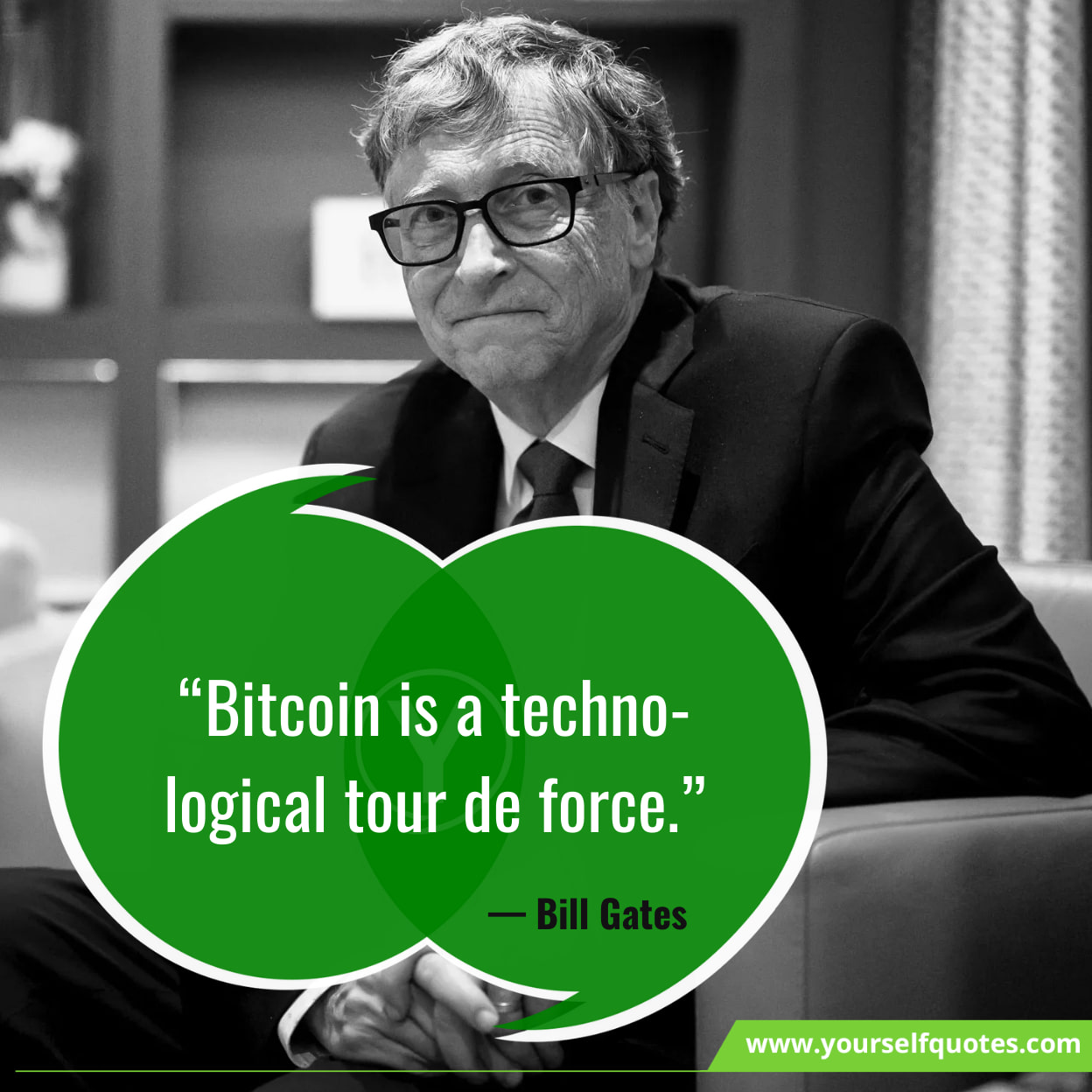 “Bitcoin is going to change the world from a transactional money standpoint, not just for Africa, but for everywhere.”— Akon

“Bitcoin will do to banks what email did to the postal industry.”— Rick Falkvinge

“Every informed person needs to know about Bitcoin because it might be one of the world’s most important developments.” — Leon Luow

“Bitcoin is just one example of something that uses a blockchain.”

“Bitcoin actually has the balance and incentives right, and that is why it is starting to take off.”— Julian Assange

“Bitcoin is here to stay. There would be a hacker uproar against anyone who attempted to take credit for the patent of cryptocurrency. And I wouldn’t want to be on the receiving end of hacker fury.”— Adam Draper

“Bitcoin was created to serve a highly political intent, a free and uncensored network where all can participate with equal access.”— Amir Taaki

“I trust bitcoin more than I trust my bank.” — Adam Draper 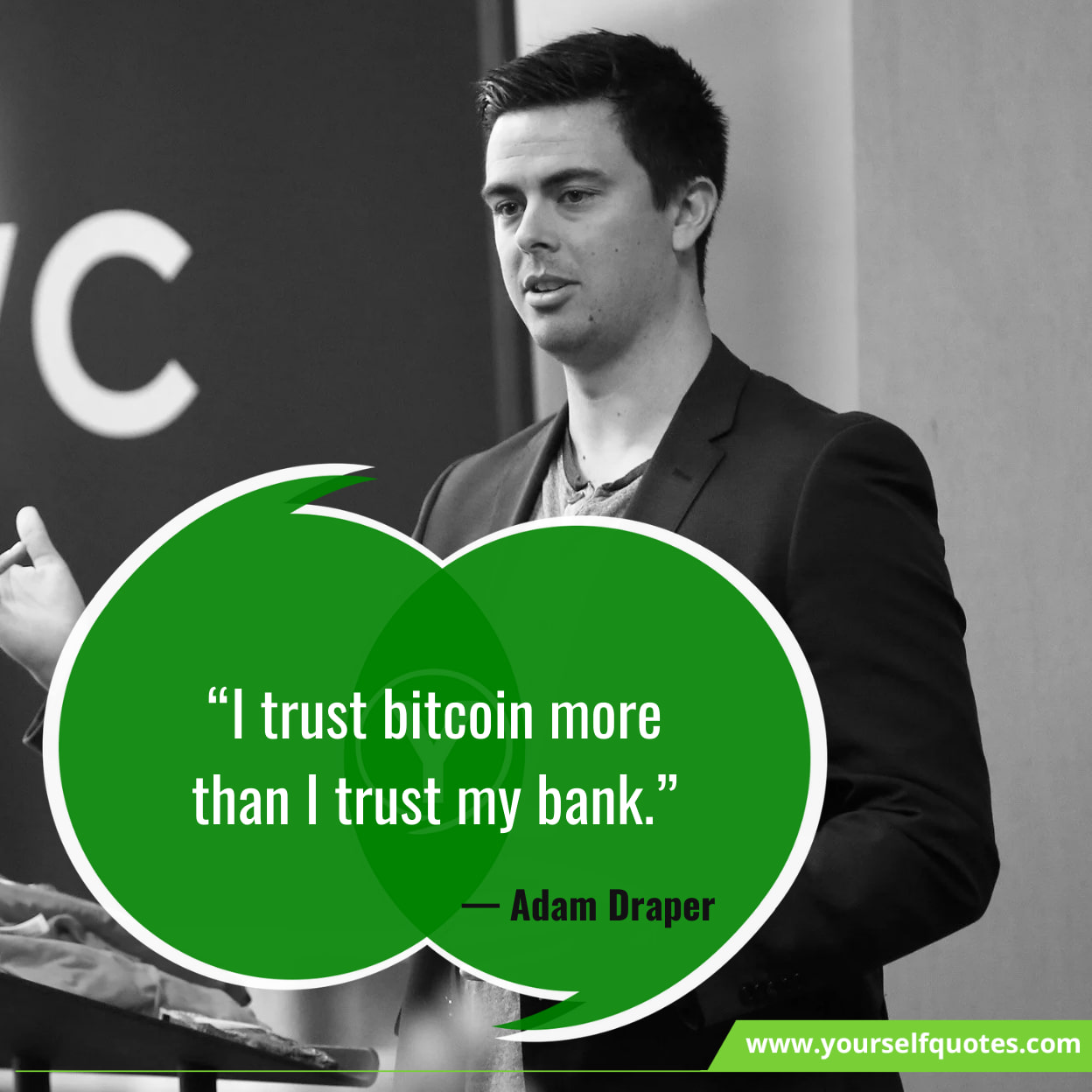 “Right now Bitcoin feels like the Internet before the browser.”— Wences Casares 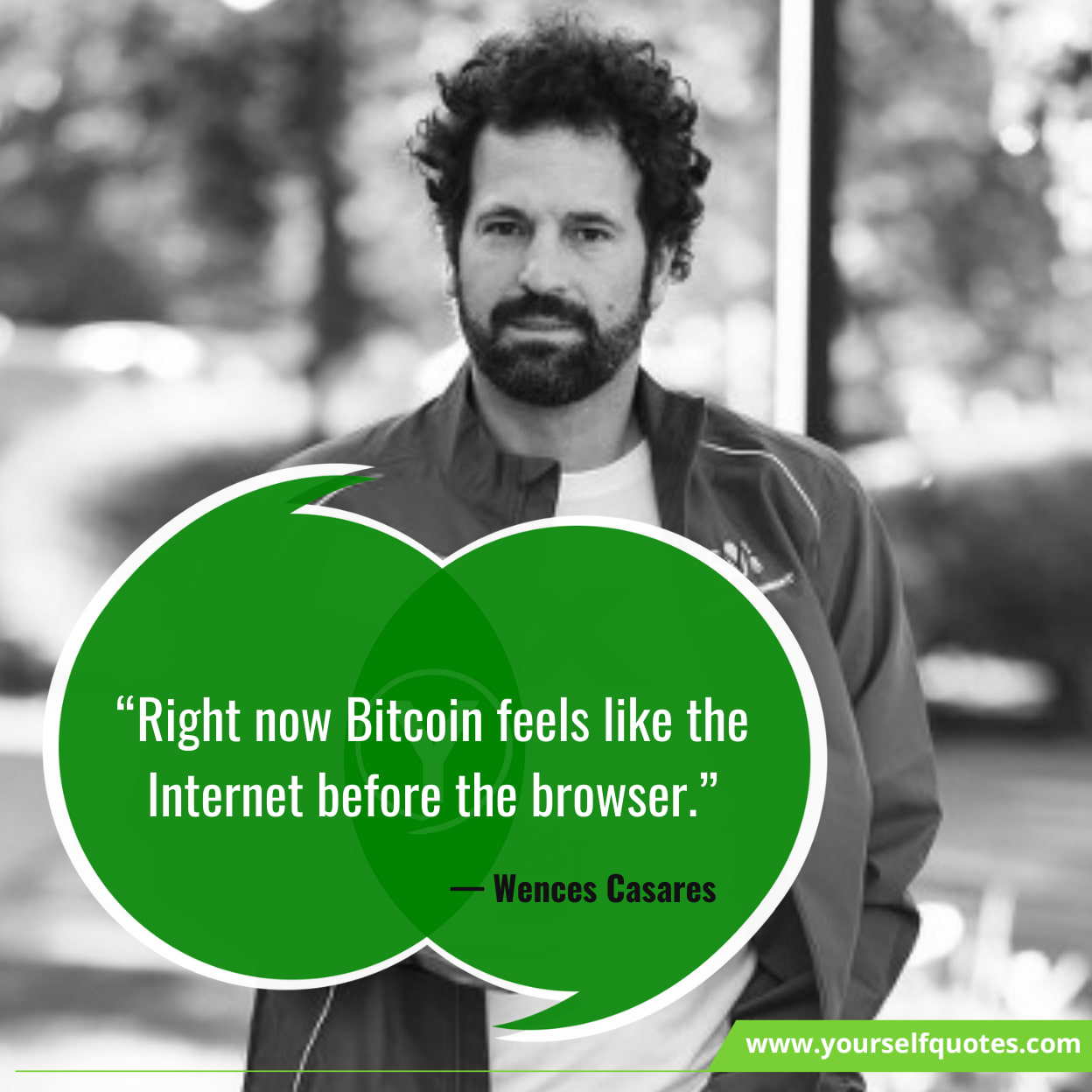 “Bitcoin will do to banks what email did to the postal industry.” — Rick Falkvinge

“I believe that Bitcoin holds value as a form of ‘good money that is superior to any previously discovered or developed form of money.” — Jeremy Allaire

“Bitcoin is one of the most viral concepts I’ve ever encountered.” — Barry Silbert

“Just as it got easier to use email, it will be easier to use Bitcoin as people invest in it and become more familiar with it.” — Gavin Andresen

“Bitcoin’s got its issues. But it is not competing with perfection.” — Dan Kaminsky

“Bitcoin, in the short or even long term, may turn out to be a good investment in the same way that anything that is rare can be considered valuable. Like baseball cards. Or a Picasso.” — Andrew Ross Sorkin

“Think of Bitcoin as a bank account in the cloud, and it’s completely decentralized: not the Swiss government, not the American government. It’s all the participants in the network enforcing.” — Naval Ravikant

“Bitcoin is great as a form of digital money, but its scripting language is too weak for any kind of serious advanced applications to be built on top.” — Vitalik Buterin

“There is nothing that Bitcoin can do which Ethereum can’t. While Ethereum is less battle-tested, it is moving faster, has better leadership, and has more developer mindshare.” — Fred Ehrsam

“Bitcoin will hit thousands of dollars per coin, because it’s worth at least that much, or it’s worth zero.” — Erik Voorhees 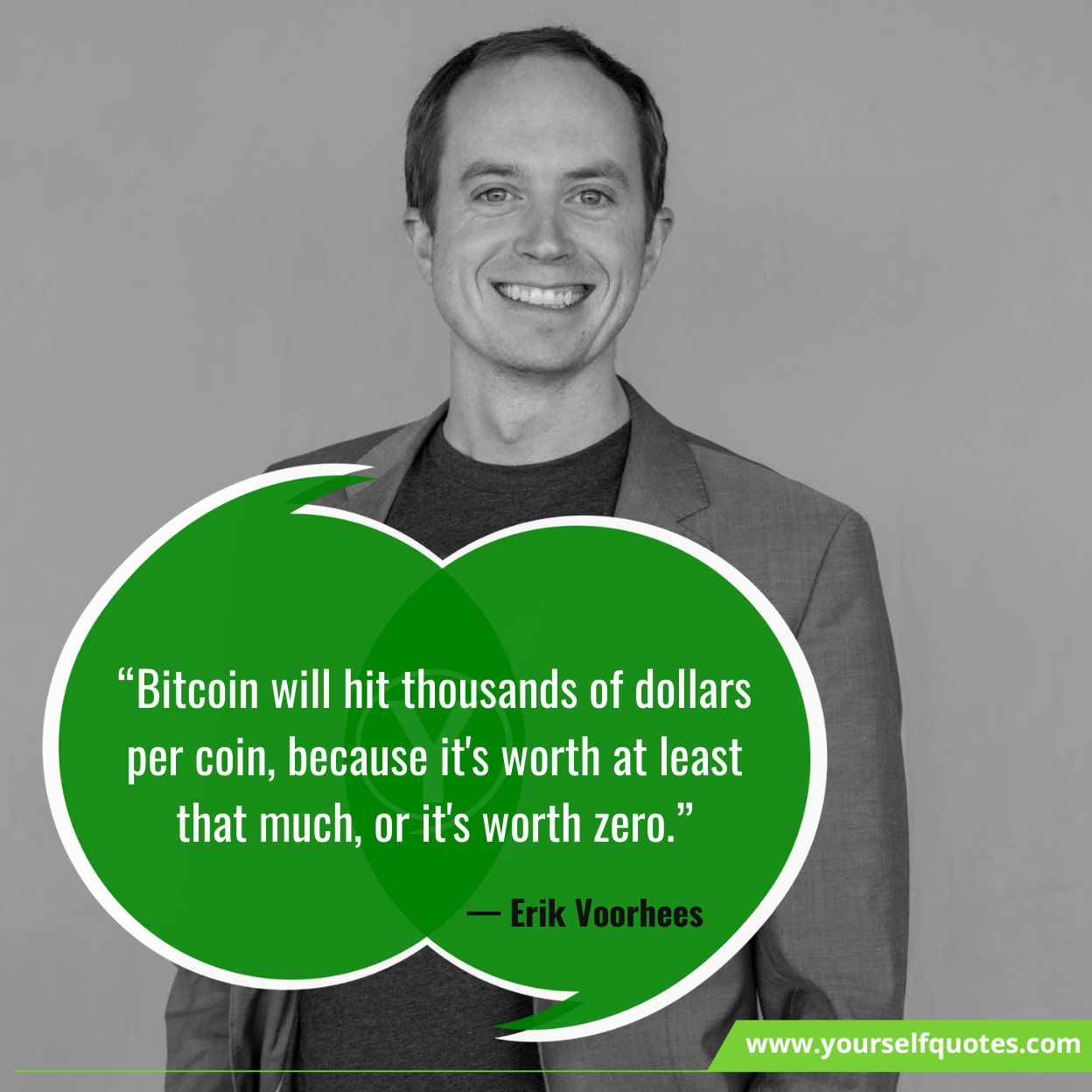 “This Bitcoin currency is a voluntary decentralized currency, anonymous. It can’t be shut down by anyone; there are no central servers.” — Jeff Berwick

“Our basic thesis for bitcoin is that it is better than gold.” — Tyler Winklevoss[/pullquote]

“Every informed person needs to know about Bitcoin because it might be one of the world’s most important developments.” — Leon Luow

“Bitcoin is the most important invention in the history of the world since the Internet.” — Roger Ver

“Bitcoin, and its ideas, will be a disrupter to the traditional notions of currency. In the end, the currency will be better for it.” — Edmund Moy

“Stay away from it. It’s a mirage, basically. In terms of cryptocurrencies, generally, I can say almost with certainty that they will come to a bad ending.” — Warren Buffet

“The blockchain technology that underlies Bitcoin is a major technical breakthrough that could, in time, revolutionize both the Internet and the financial industry as we know them, and the first steps of that potential revolution are now underway.” — Jon Evans

“We have elected to put our money and faith in a mathematical framework that is free of politics and human error.” — Tyler Winklevoss

“I think the internet is going to be one of the major forces for reducing the role of government. The one thing that’s missing, but that will soon be developed, is a reliable e-cash, a method whereby on the Internet you can transfer funds from A to B without A knowing B or B knowing A… ” — Milton Friedman

Bitcoin, also known as a cryptocurrency, virtual currency, or digital currency, is a completely digital form of money.

It’s similar to a virtual cash system. It can be used to purchase goods and services, but few merchants accept it, and some countries have outright banned it.

Bitcoin’s value has soared dramatically since its public launch in 2009. One Bitcoin once sold for less than $150 per coin, but now sells for more than $62,000 as of October 26, 2021. Because its supply is capped at 21 million coins, many expect its price to rise steadily over time, especially as more large, institutional investors begin to treat it as a kind of digital gold to hedge against market volatility and inflation.

So next time when you are thinking about Crypto, just remember this piece of content and do share these Bitcoin Quotes with your network.

Motivational Hard Work Quotes That Will Ignite You