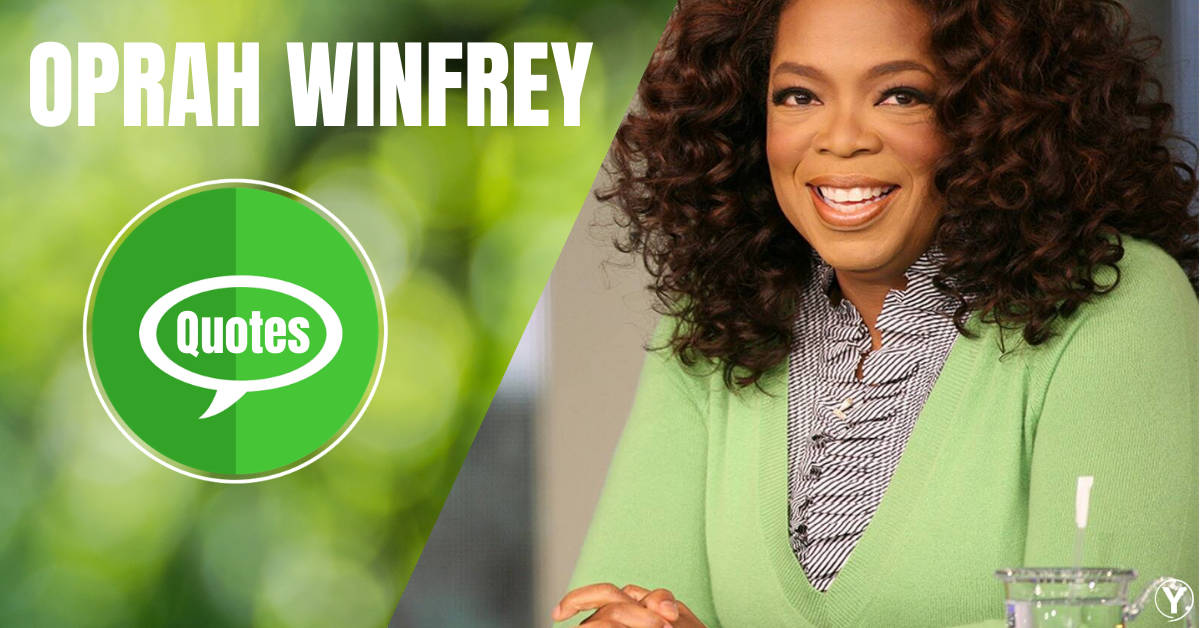 Who is not aware of Oprah Winfrey, the first lady of talk shows? She is the most-watched daytime show host on television. The way she treats her guests and audiences in her Oprah Winfrey Show made her extremely popular in the media industry. She now also owns her own production company which is named Harpo. She is also a philanthropist. Oprah Angel Network is the name of her charity organization.

Born on January 29, 1954, in Mississippi, United States, Oprah Winfrey started taking her interest in media-related fields from a very early age. Oprah’s childhood was extremely difficult. She started her early education at Lincoln High School, Milwaukee. Due to her early success, she was transferred to Nicolet High School and completed her education there. She also got a full scholarship from Tennessee State University.

Oprah Winfrey was born into an extremely poor family. Her mother’s name was Vernita Lee and her father was Vernon Winfrey. She was born without any proper marriage between her parents. Noah Robinson Sr., A World War II veteran also claimed to be Oprah’s biological father. It was still not found out that to which family she belonged. After a genetic test, it was found out that, genetically, she is 89% Sub-Saharan African, 3% East Asian, and 8% Native American.

Oprah’s childhood was very struggling. She lived with her maternal grandmother who was so poor that she made Oprah Winfrey wear clothes made with potato sacks. Her early life was like a hell. She was molested many times by her cousins, uncles, and family friends from the age of 9. When she was 13 years old, she ran away from her home after getting abused. When she turned 14, she gave premature birth to a son who died soon after his birth. From this all, we learned that Oprah Winfrey’s childhood was very depressing.

After completing her education, she started working in a grocery store. After winning the Miss Black Tennessee beauty pageant, WVOL got attracted to her and they hired her to do the news part-time. She started working in local media from a very early age. She was the youngest as well as the first black female news anchor in the media industry. Since then, she hosted and co-hosted many famous TV shows.

Oprah Winfrey wrote many quotes for her lovers and followers. we managed to mention her all-time Oprah Winfrey Quotes here.

“Your true passion should feel like breathing; it’s that natural.” ― Oprah Winfrey 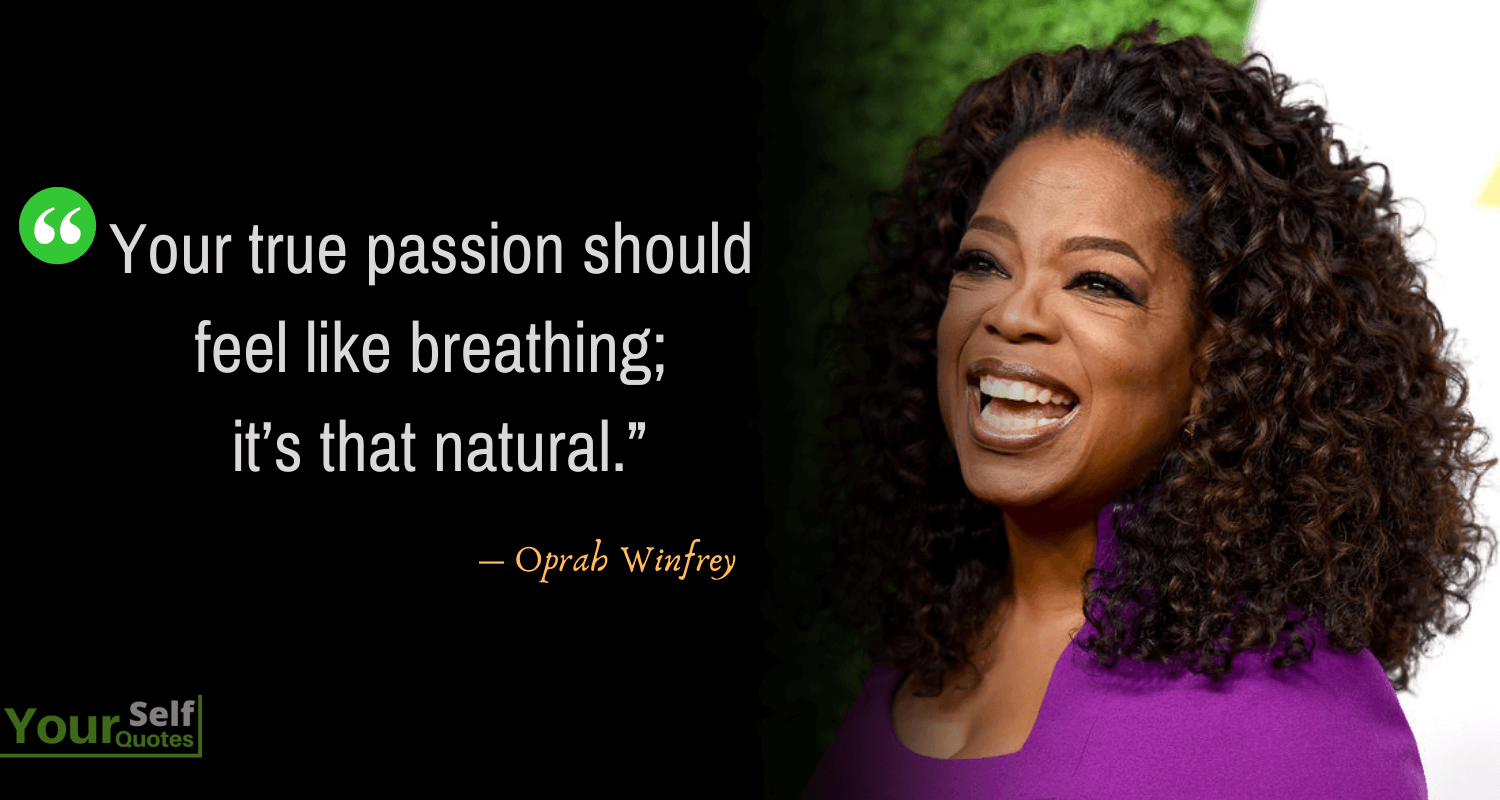 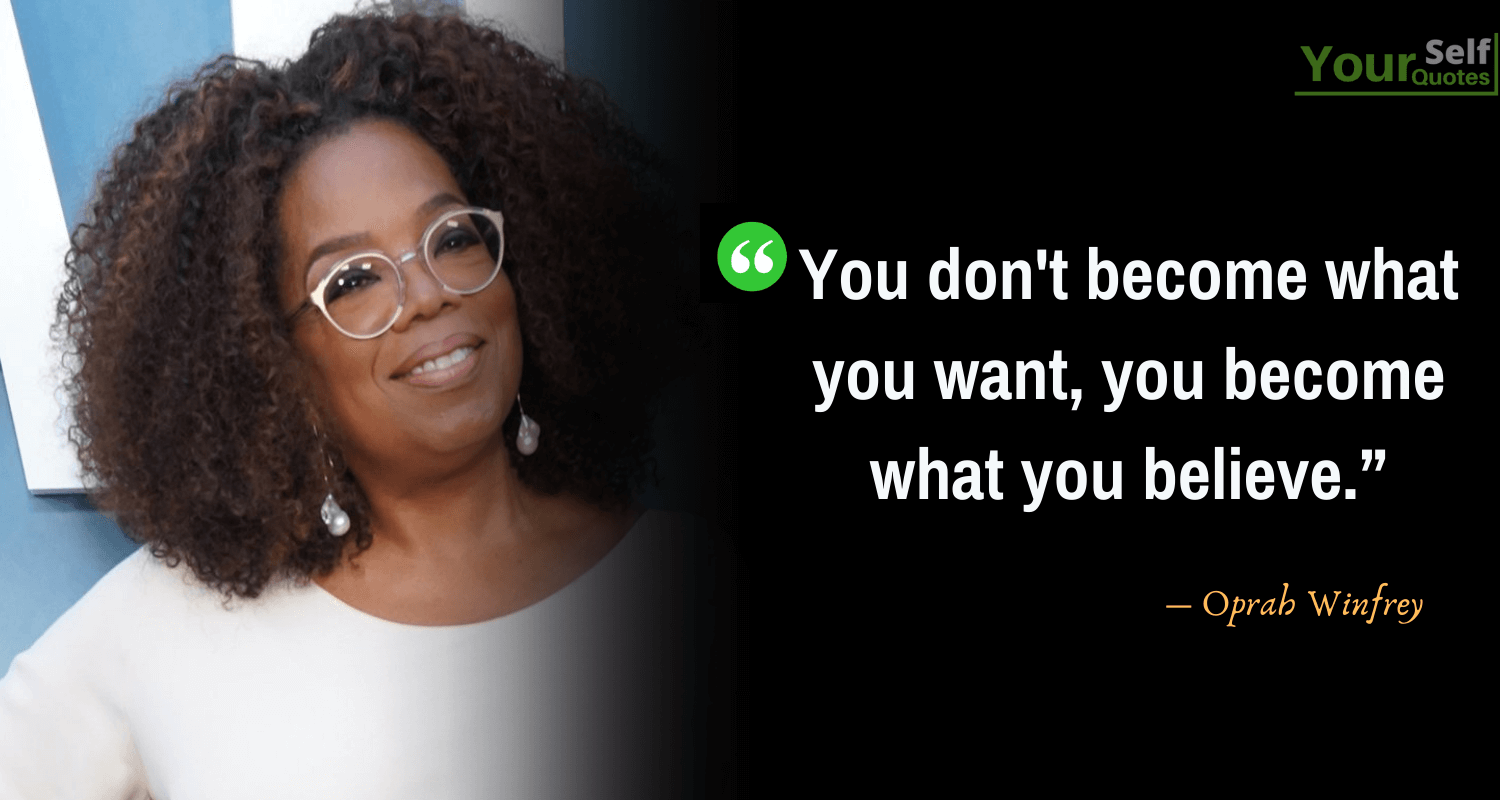 “Do what you have to do until you can do what you really want to do.” ― Oprah Winfrey 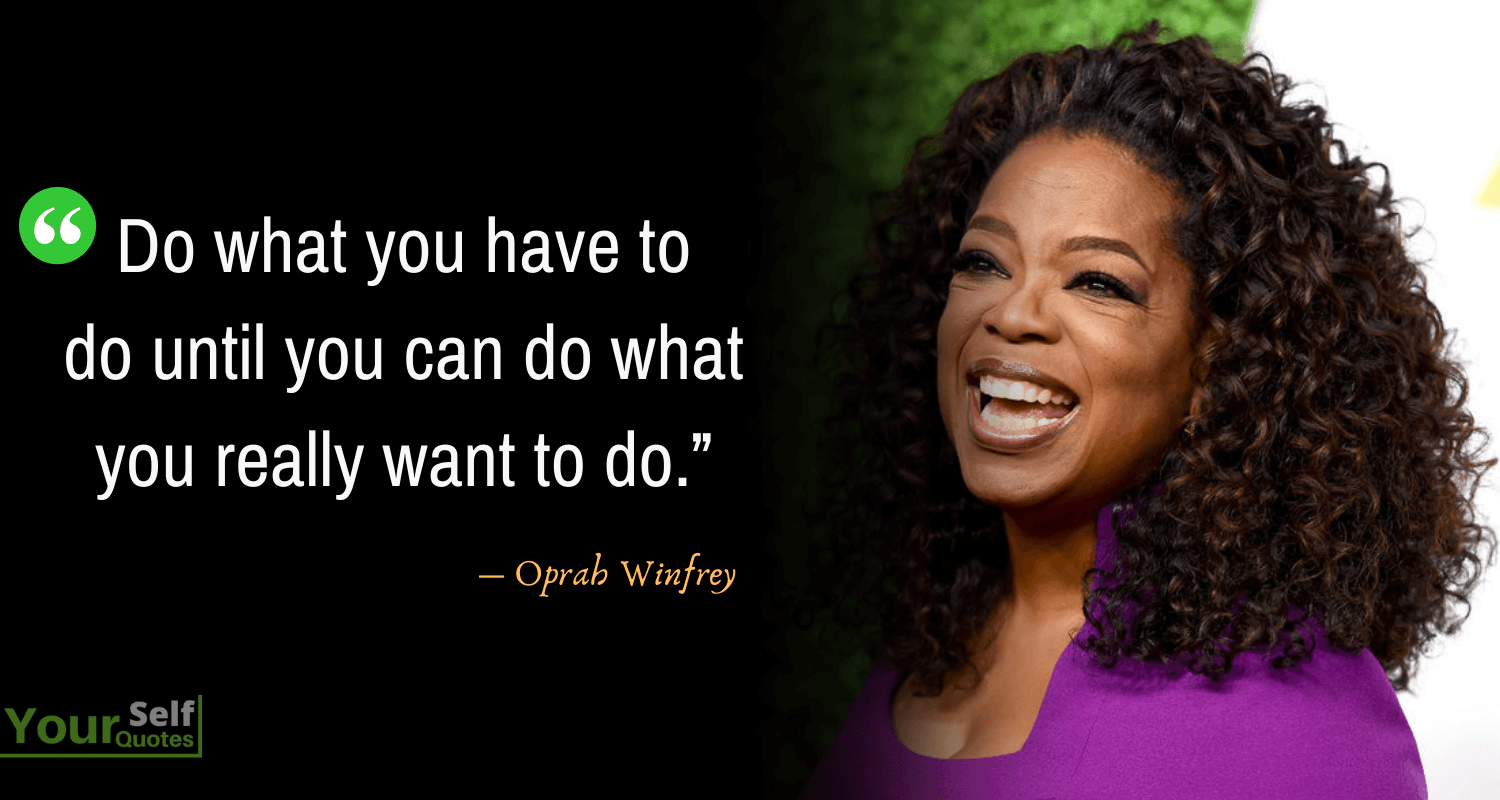 “I believe that every single event in life happens in an opportunity to choose love over fear.” ― Oprah Winfrey 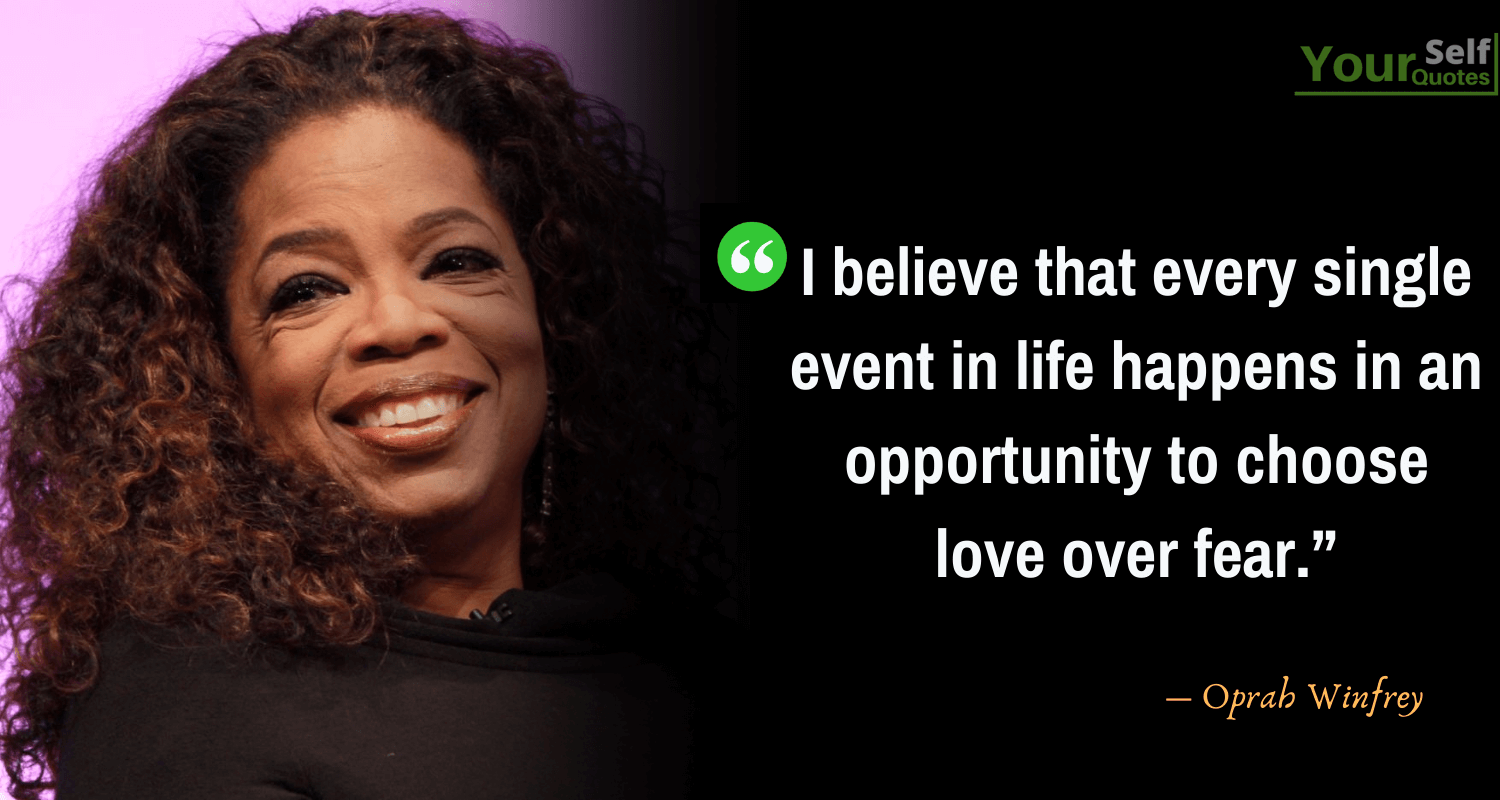 “Passion is energy. Feel the power that comes from focusing on what excites you.” ― Oprah Winfrey 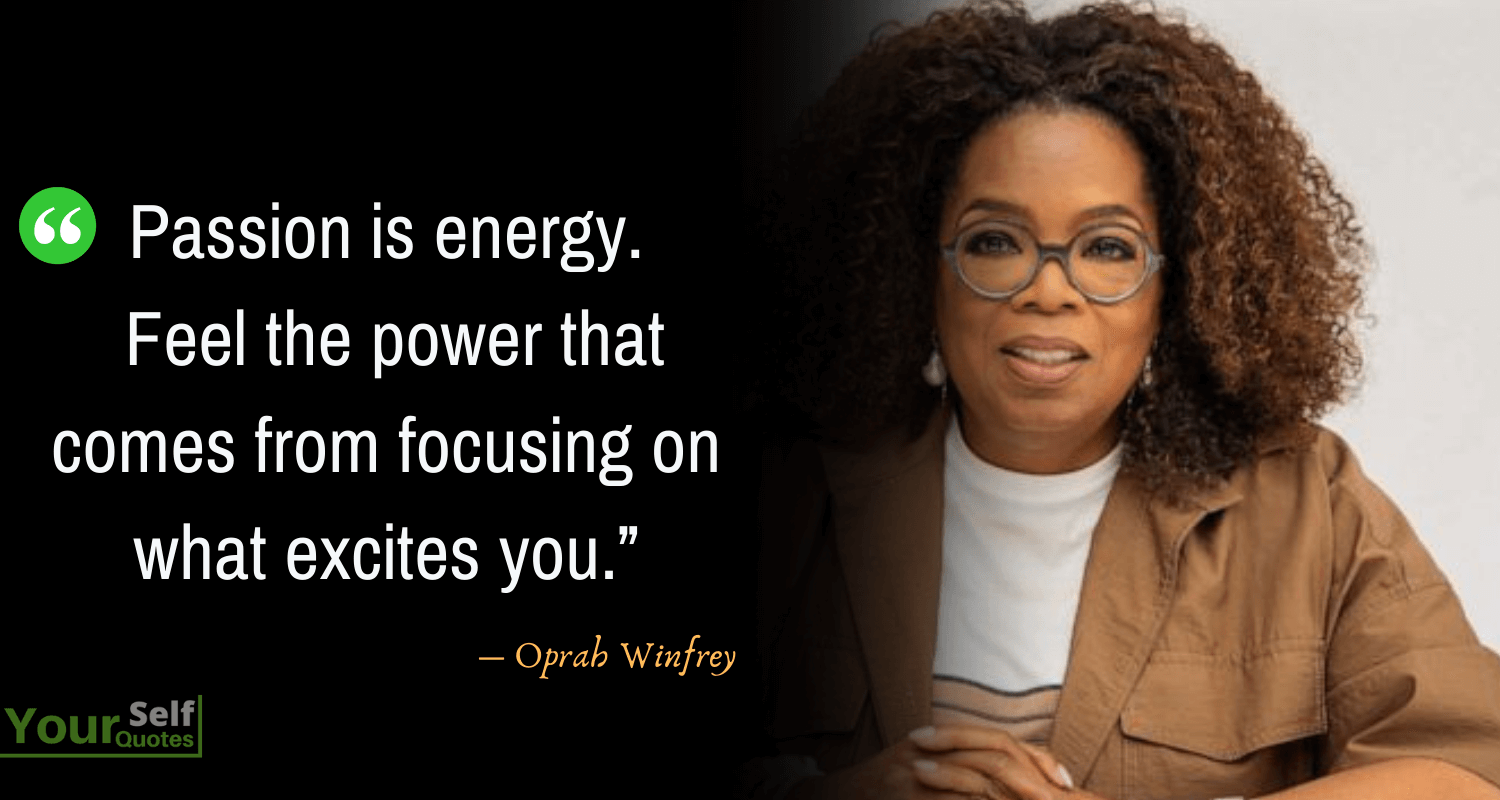 “The big secret in life is that there is no big secret. Whatever your goal, you can get there if you’re willing to work.” ― Oprah Winfrey 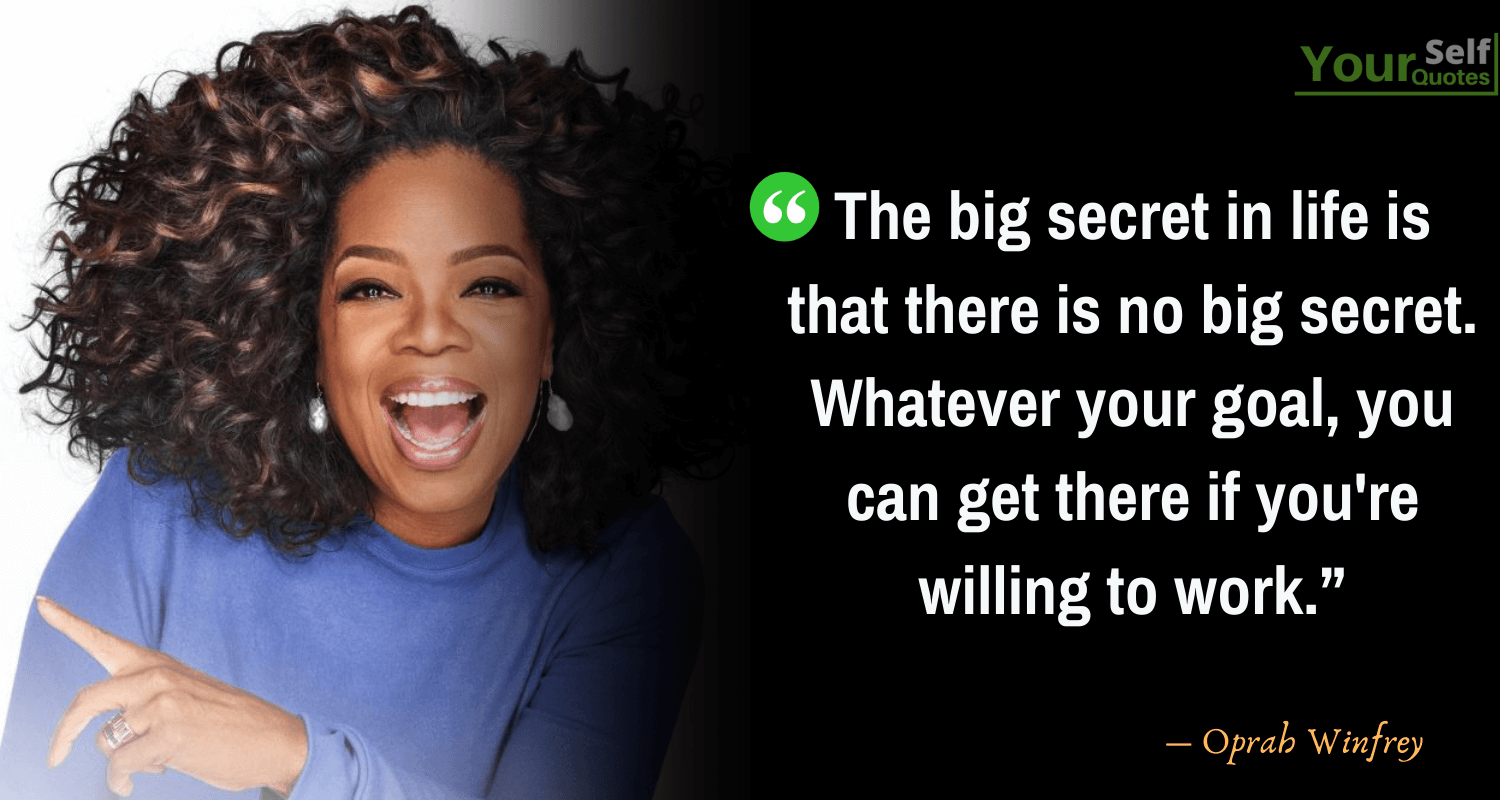 “Real integrity is doing the right thing, knowing that nobody’s going to know whether you did it or not.” ― Oprah Winfrey 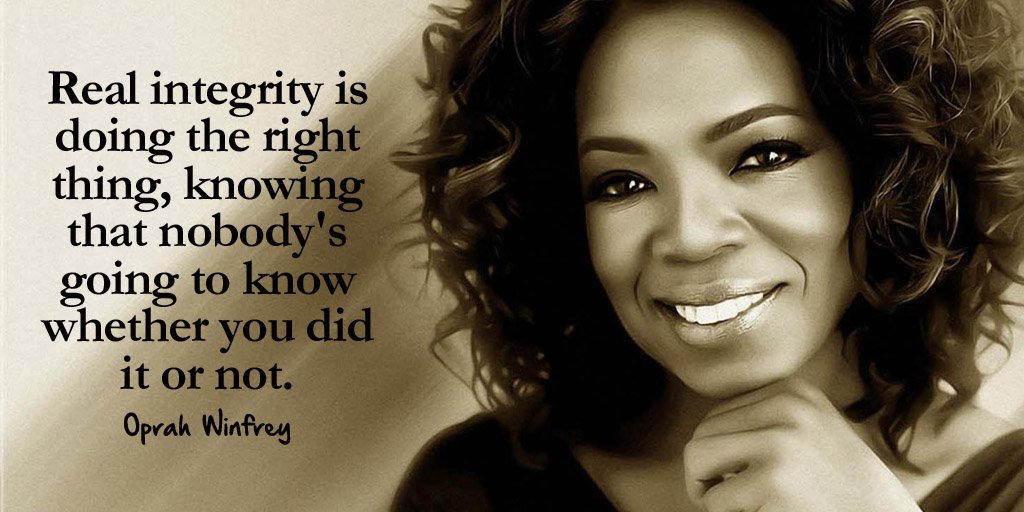 “If you want your life to be more rewarding, You have to change the way you think.” ― Oprah Winfrey 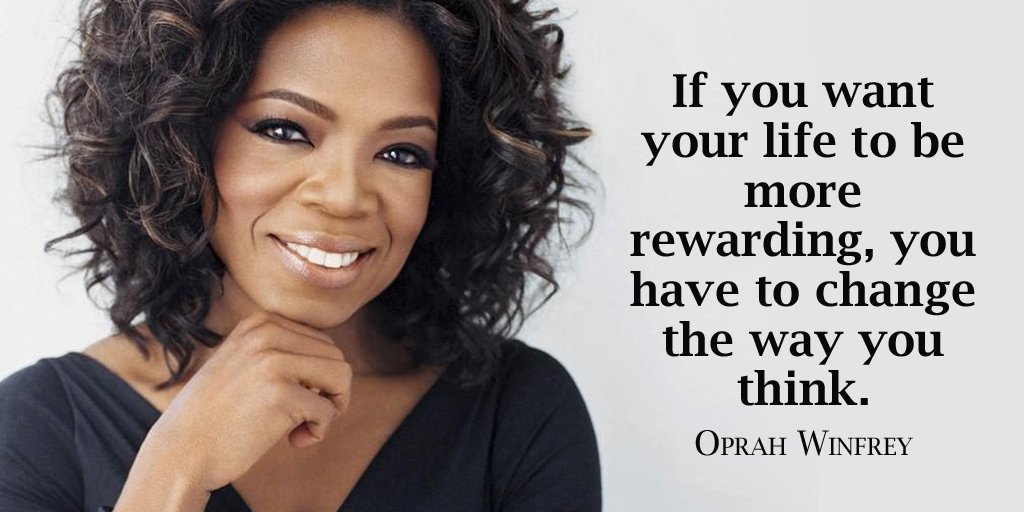 “Cheers to a new year and another chance for us to get it right.” ― Oprah Winfrey 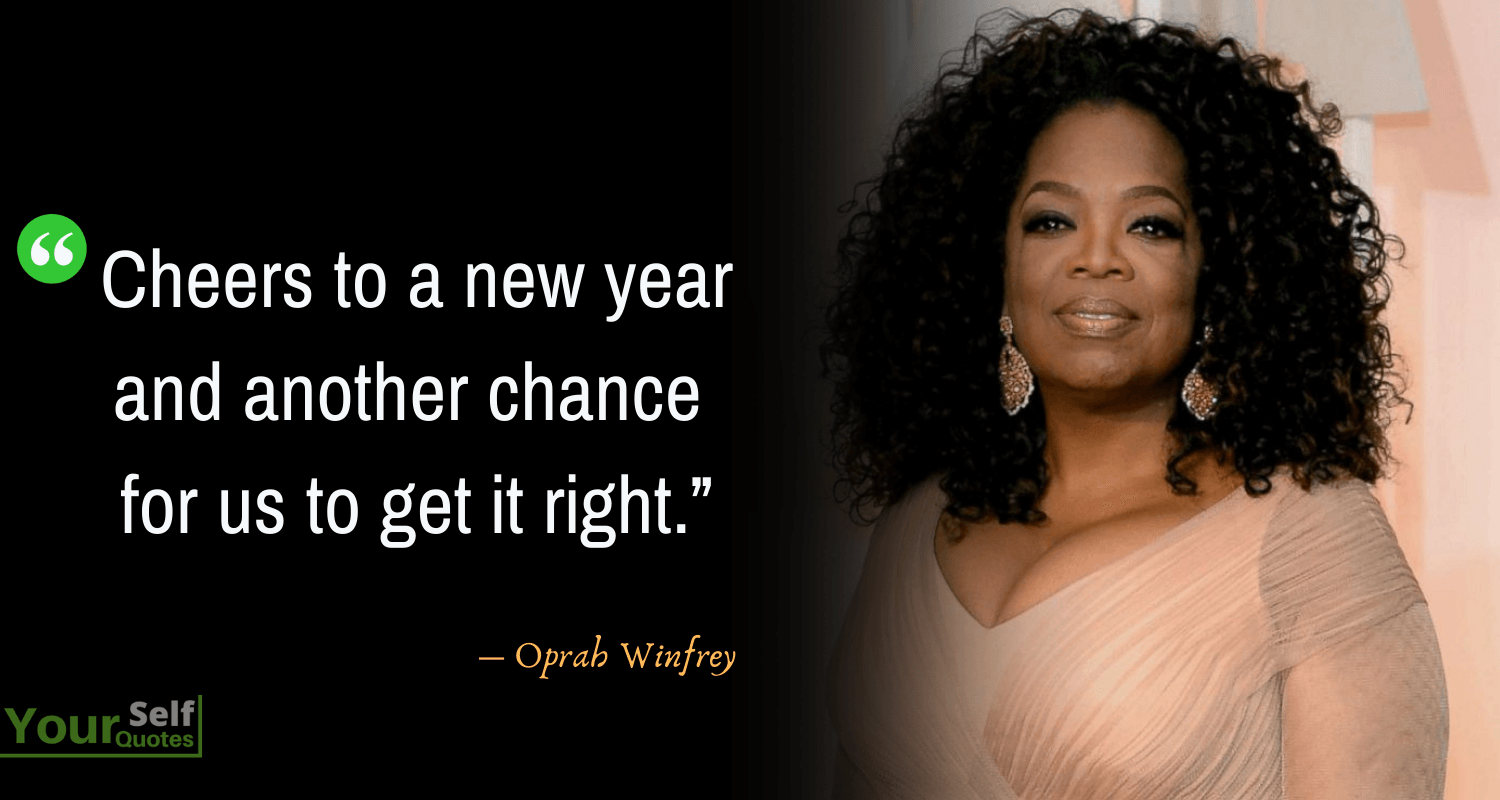 “You can have it all, but you can’t have it all at once.”  ― Oprah Winfrey 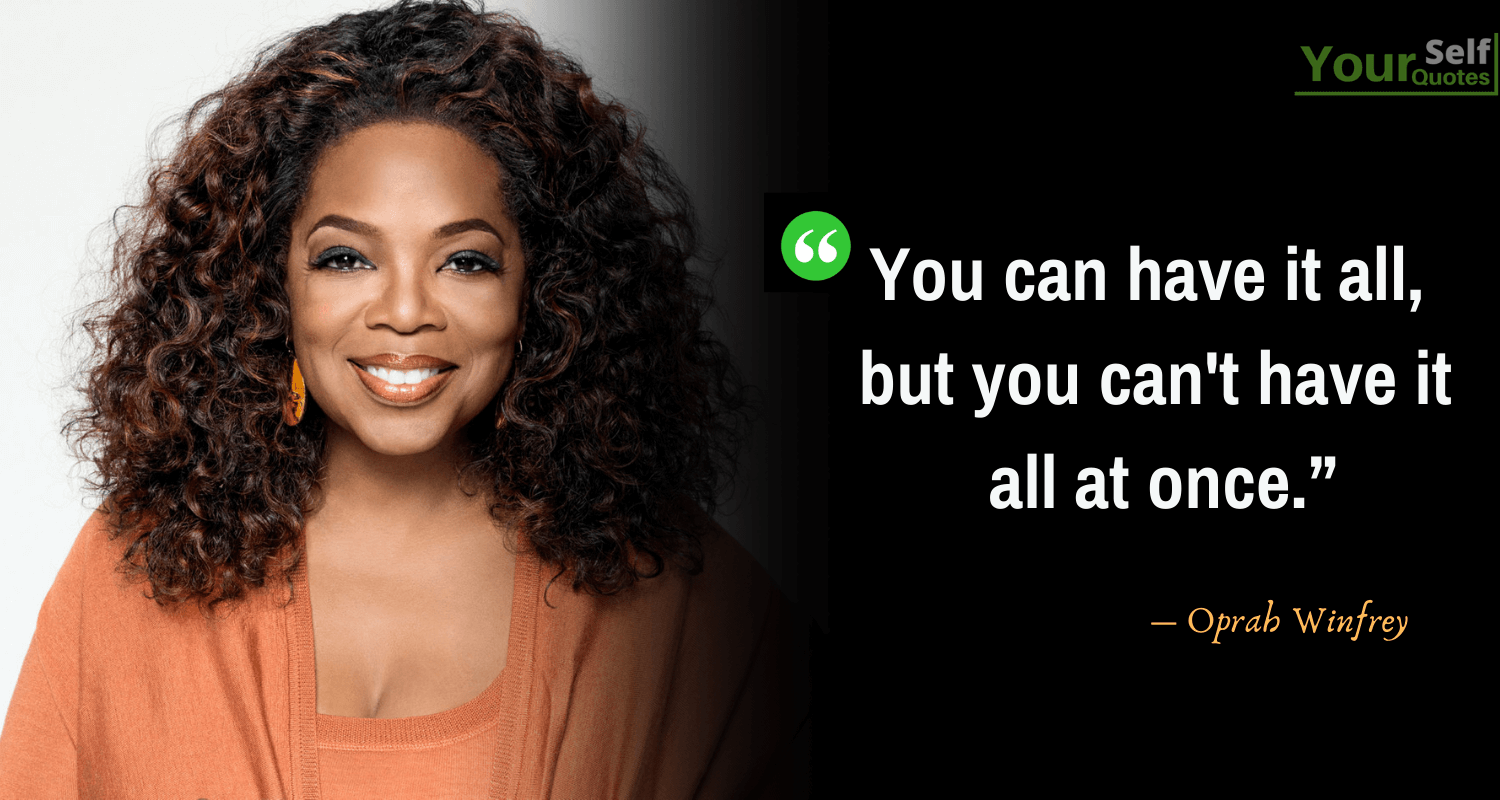 “True forgiveness is when you can say, ‘Thank you for that experience.” — Oprah Winfrey

“There is no greater gift you can give or receive than to honor your calling. It’s why you were born. And how you become most truly alive.” ― Oprah Winfrey

“It doesn’t matter who you are, where you come from. The ability to triumph begins with you. Always ” ― Oprah Winfrey

“I believe that every single event in life happens in an opportunity to choose love over fear.” ― Oprah Winfrey

“Be thankful for what you have; you’ll end up having more. Concentrate on what you don’t have you will never have enough.” ― Oprah Winfrey

“Every day brings a chance to live free of regret and with as much joy, fun, and laughter as you can stand.” ― Oprah Winfrey

“There is no paycheck that can equal the feeling of contentment that comes from being the person you are meant to be.” ― Oprah Winfrey

“You know you are on the road to success if you would do your job and not be paid for it.” ― Oprah Winfrey

“With every experience, you alone are painting your own canvas, thought by thought, choice by choice.” ― Oprah Winfrey Quotes

“The more you praise and celebrate your life, the more there is in life to celebrate.” ― Oprah Winfrey

“The reason I’ve been able to be so financially successful is my focus has never, ever for one minute been money.” ― Oprah Winfrey 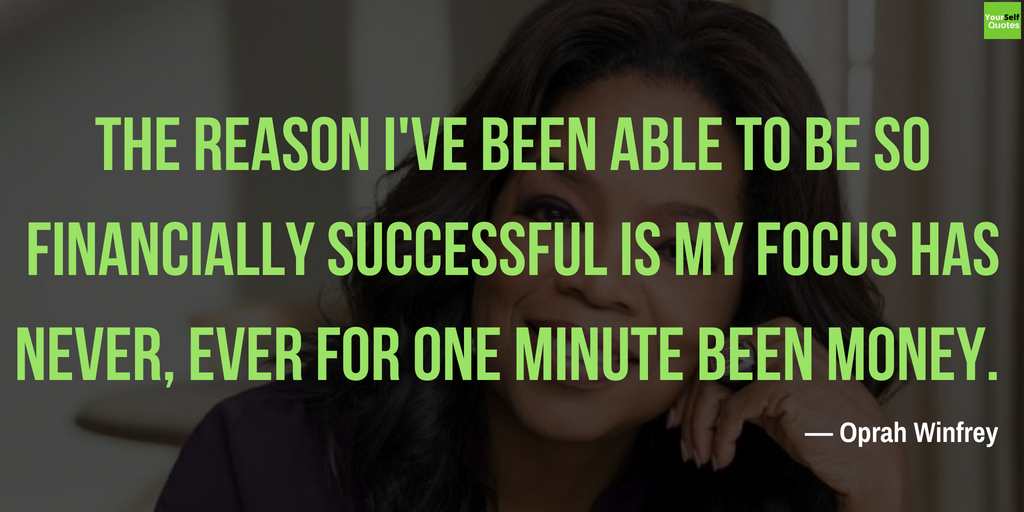 “The greatest discovery of all time is that a person can change his future by merely changing his attitude.” ― Oprah Winfrey

“Lots of people want to ride with you in the limo, but what you want is someone who will take the bus with you when the limo breaks down.” ― Oprah Winfrey

“The Key is not to worry about being successful, but to instead work toward being significant and the success will naturally follow.” ― Oprah Winfrey

“Create the highest, grandest vision possible for your life because you become what you believe.” ― Oprah Winfrey

“The big secret in life is there is no secret. Whatever your goal. You can get there if you’re willing to work.” ― Oprah Winfrey 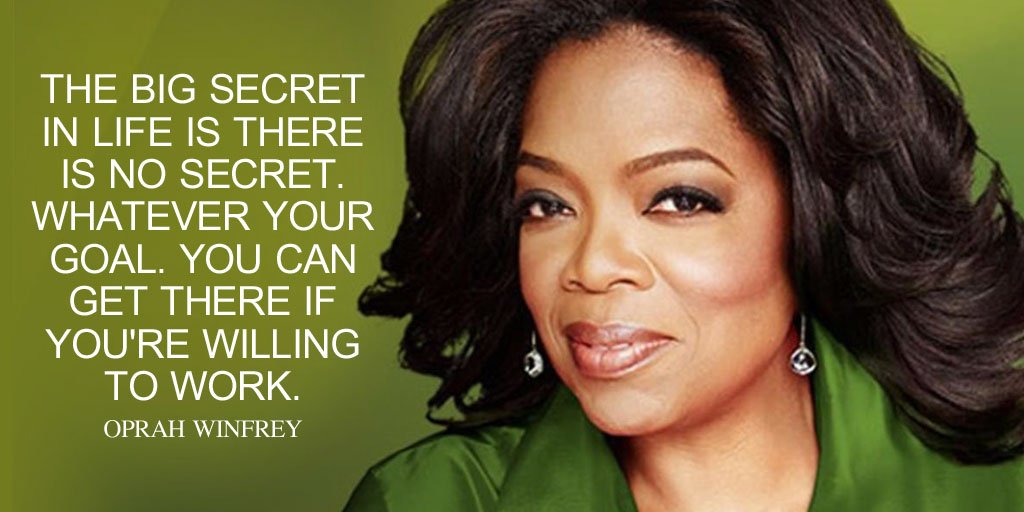 “The key to realizing a dream is to focus not on success but on significance–and then even the small steps and little victories along your path will take on greater meaning.” ― Oprah Winfrey Quotes

“Find a way to get paid for doing what you love. Then every paycheck will be a bonus.” ― Oprah Winfrey

“Be thankful for what you have; you’ll have more. Concentrate on what you don’t have, you’ll never have enough.” ― Oprah Winfrey 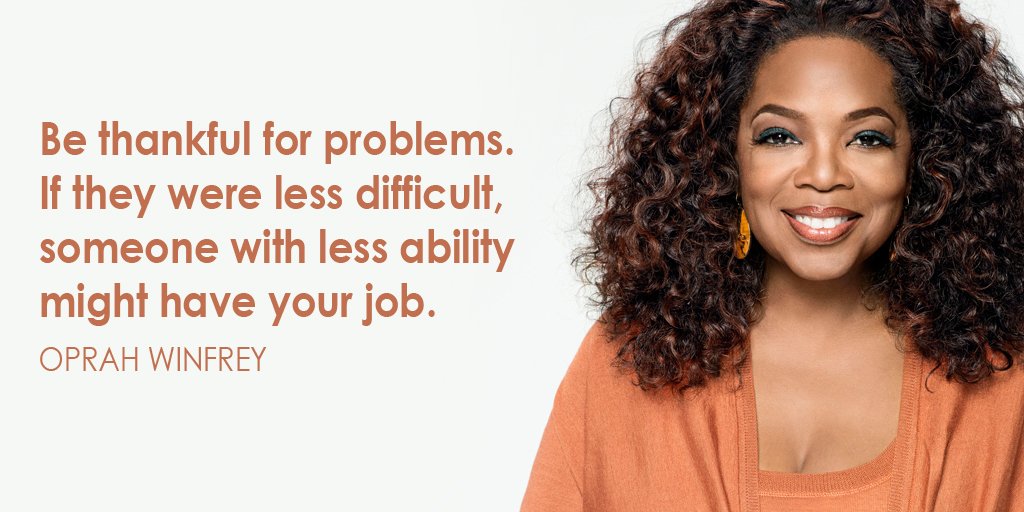 “Every time you state what you want or believe, you’re the first to hear it. It’s a message to both you and others about what you think is possible. Don’t put a ceiling on yourself.” ― Oprah Winfrey

“If you don’t know what your passion is, realize that one reason for your existence on earth is to find it. ”― Oprah Winfrey Quotes

“Breathe. Let go. And remind yourself that this very moment is the only one you know you have for sure.” ― Oprah Winfrey

“We can’t become what we need to be by remaining what we are.” ― Oprah Winfrey

“Think like a queen. A queen is not afraid to fail. Failure is another stepping stone to greatness.”  ― Oprah Winfrey 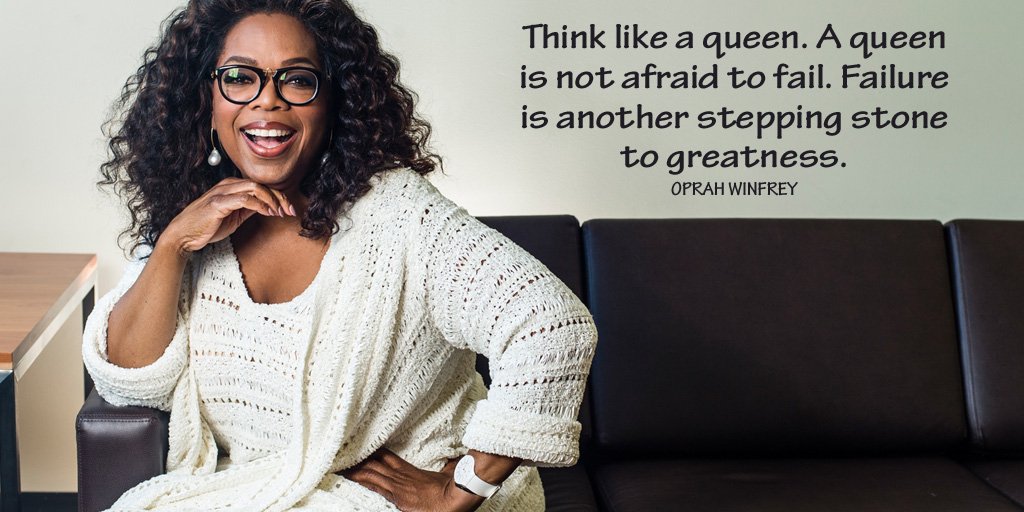 “The only courage you will need is the courage to live the life you are meant to.” ― Oprah Winfrey

“Don’t back down just to keep the peace. Standing up for your beliefs builds self-confidence and self-esteem.” ― Oprah Winfrey

“My philosophy is that not only are you responsible for your life but doing the best at this moment puts you I the best place for the next moment.” ― Oprah Winfrey 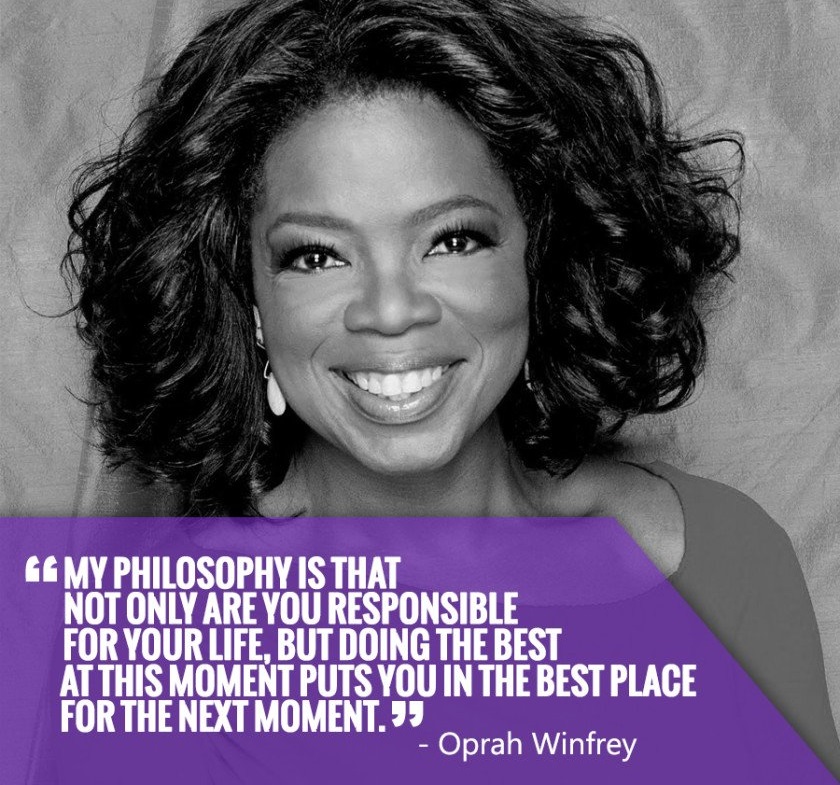 “Leadership is about empathy. It is about having the ability to relate to and connect with people for the purpose of inspiring and empowering their lives.” ― Oprah Winfrey

“I define joy as a sustained sense of well-being and internal peace – a connection to what matters.” ― Oprah Winfrey 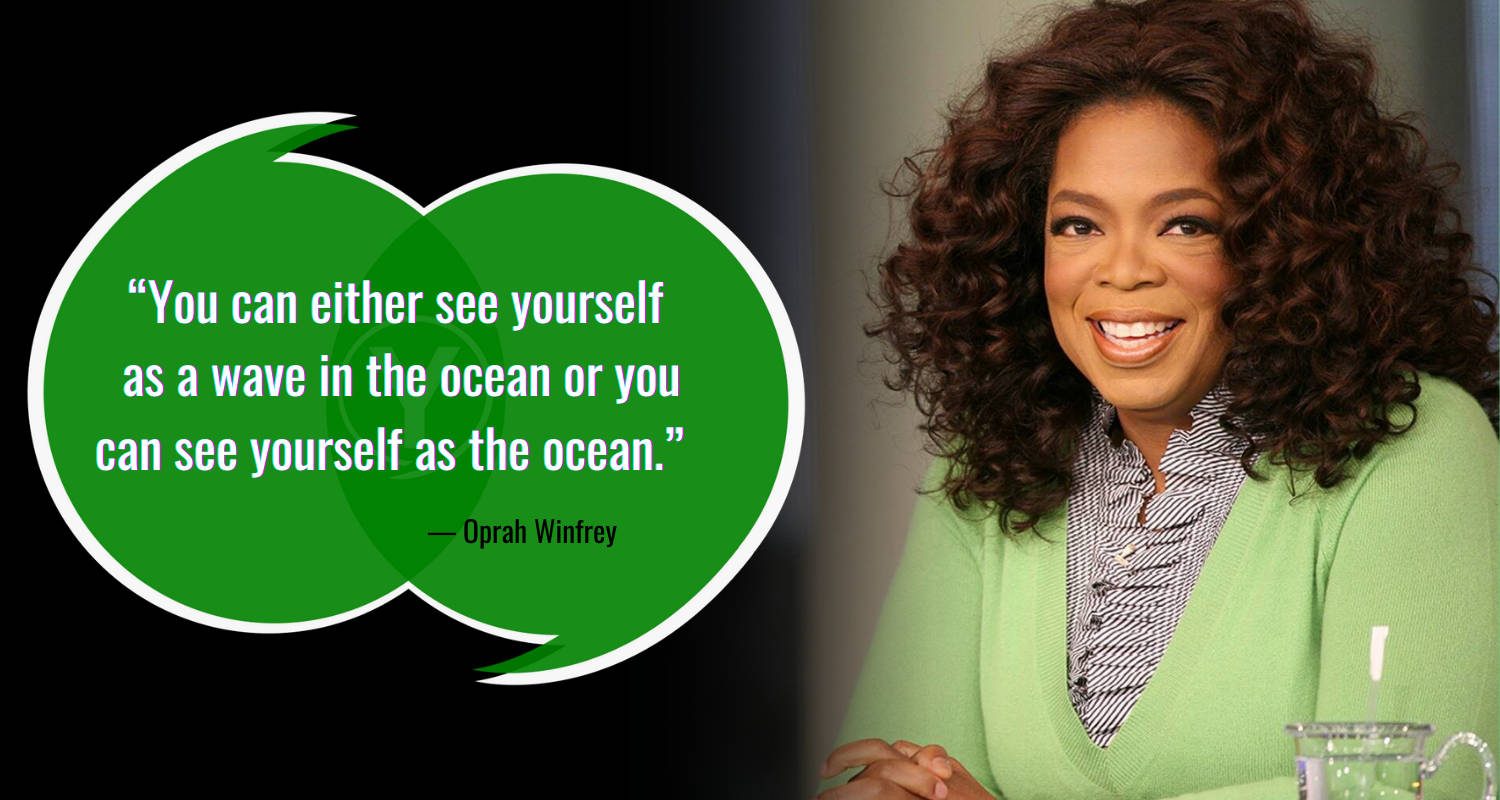 “The whole point of being alive is to evolve into the complete person you were intended to be.” ― Oprah Winfrey

“I still have my feet on the ground, I just wear better shoes.” – Oprah Winfrey.

“What you focus on expands, and when you focus on the goodness in your life, you create more of it. Opportunities, relationships, even money flowed my way when I learned to be grateful no matter what happened in my life.” ― Oprah Winfrey

“Surround yourself only with people who are going to take you higher.” ― Oprah Winfrey

From the biography of this legendary woman, we came to know that life is difficult, but we must try our best to improve it. Oprah did so, and in 2003, she became the first black female billionaire in The United States. She is also a great actor and she won many awards for her fabulous acting.

Thank you for visiting our page, also keep visiting our websites for more updates and share, comment with your friends!!!

This website uses cookies to improve your experience while you navigate through the website. Out of these cookies, the cookies that are categorized as necessary are stored on your browser as they are essential for the working of basic functionalities of the website. We also use third-party cookies that help us analyze and understand how you use this website. These cookies will be stored in your browser only with your consent. You also have the option to opt-out of these cookies. But opting out of some of these cookies may have an effect on your browsing experience.
Necessary Always Enabled
Necessary cookies are absolutely essential for the website to function properly. This category only includes cookies that ensures basic functionalities and security features of the website. These cookies do not store any personal information.
Non-necessary
Any cookies that may not be particularly necessary for the website to function and is used specifically to collect user personal data via analytics, ads, other embedded contents are termed as non-necessary cookies. It is mandatory to procure user consent prior to running these cookies on your website.
SAVE & ACCEPT
122 Shares
Copy link
CopyCopied
Powered by Social Snap