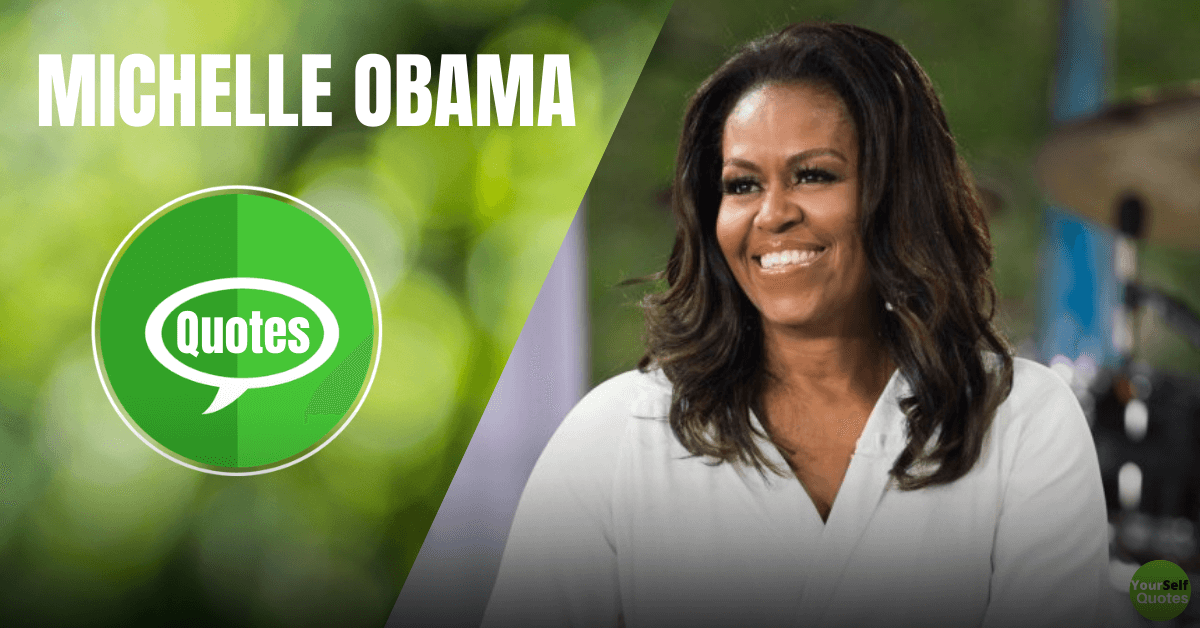 These are the wisest words by an inspirational figure, Michelle Obama, who knows how to unite people on both sides of the aisle. She is the one who has power in her words and holds charisma in her personality. Through her influential quotes, she became a reason to inspire love and humanity among people. Michelle Obama, a lady from America, holds a list of the impressive set of titles; writer, advocacy icon, a lawyer, dog lover, hugger-in-chief. Yes, she is a famous writer & the first lady and wife of the 44th President of America, Barack Obama.

Michelle Obama, the first African-American, First Lady of the United States, was born on January 17, 1964, in Chicago, Illinois. She was born and brought up in Chicago’s South Side. Her father, Fraser Robinson, was a city-pump operator & a Democratic precinct captain. And her mother, Marian, was a secretary at Spiegel’s. Michelle had an older brother, Craig with a difference of 21 months apart in age. She lived in a close-knit family, staying together.

She graduated from Princeton University in 1985 & then went to earn a higher degree from Harvard Law School in 1988. She was awarded her J.D in 1988.

Michelle worked as an associate in the Chicago branch of the firm Sidley Austin, after completing her Law school. Then in 1989, she met her prince, her would-be-husband, Barack Obama, to whom she was assigned as an adviser, and eventually they both fell in love with each other. Finally, the couple got married at Trinity United Church of Christ on 3rd October 1992. They are blessed with two daughters Malia and Sasha, in 1998 and 2001 respectively.

In 2002, Michelle started working as executive director of community relations & external affairs at the University of Chicago Hospitals. In May 2005, she was appointed as Vice-President for the same.

Michelle delivered a high profile speech at the Democratic National Convention in 2004, were caught the eye of a national audience for the first time. And on 20th January 2009, his husband, Barack Obama became 44th President of the United States.

Michelle delivered a heartwarming speech at the Democratic National Convention, “Every day, the people I meet inspire me, every day they make me proud, every day they remind me how blessed we are to live in the greatest nation on Earth.” She also addressed “Serving as your first lady is an honor and a privilege.”

In May 2006, she won the title of “25 of the World’s Most Inspiring Women.” by the Essence Magazine. She also appeared twice on the cover of magazine Vogue and People magazine under the best-dressed list.

Later in 2018, she published her memoir, Becoming. She shared the deeply personal experience of writing the book. She shared a tweet, “I talk about my roots and how a girl from the South Side found her voice. I hope my journey inspires readers to find the courage to become whoever they aspire to be.”

“There are still many causes worth sacrificing for, so much history yet to be made.” ― Michelle Obama 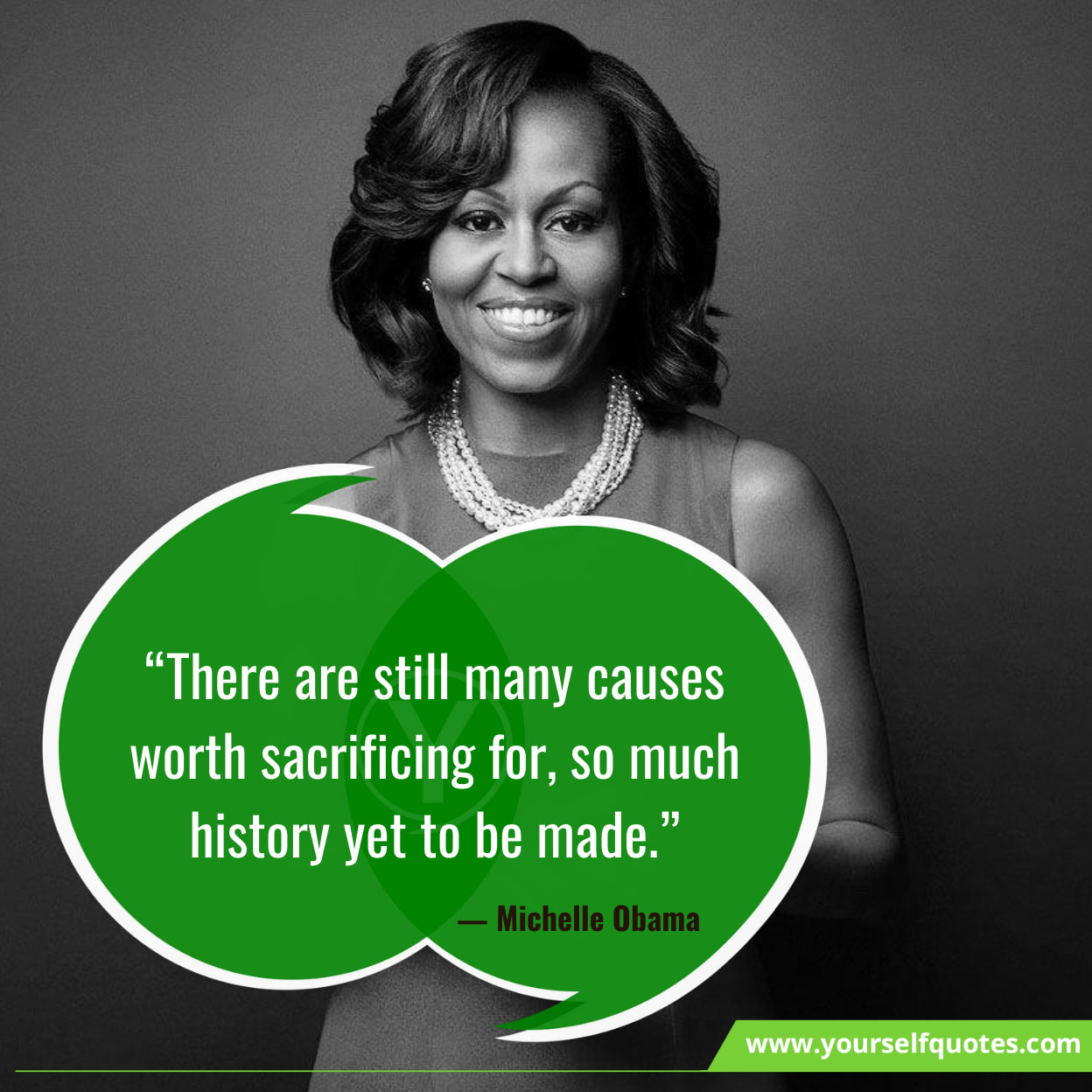 “You can’t make decisions based on fear and the possibility of what might happen.” – Michelle Obama

“Every time you fail and get back up, you practice perseverance, which is the key to life. Your strength comes in your ability to recover. – Michelle Obama

“Find people who will make you better.” – Michelle Obama

“You can’t just sit around. Don’t expect anybody to come and hand you anything. It doesn’t work that way. – Michelle Obama

“Every day you have the power to choose.” – Michelle Obama

“One of the things I realized is that if you do not take control over your time and your life, other people will gobble it up.” – Michelle Obama

“Failure is a feeling long before it becomes an actual result.” – Michelle Obama

“We need people who believe that global warming is real.” – Michelle Obama

“There is no limit to what we, as women, can accomplish.” – Michelle Obama

“Don’t be afraid. Be focused. Be determined. Be hopeful. Be empowered.” – Michelle Obama 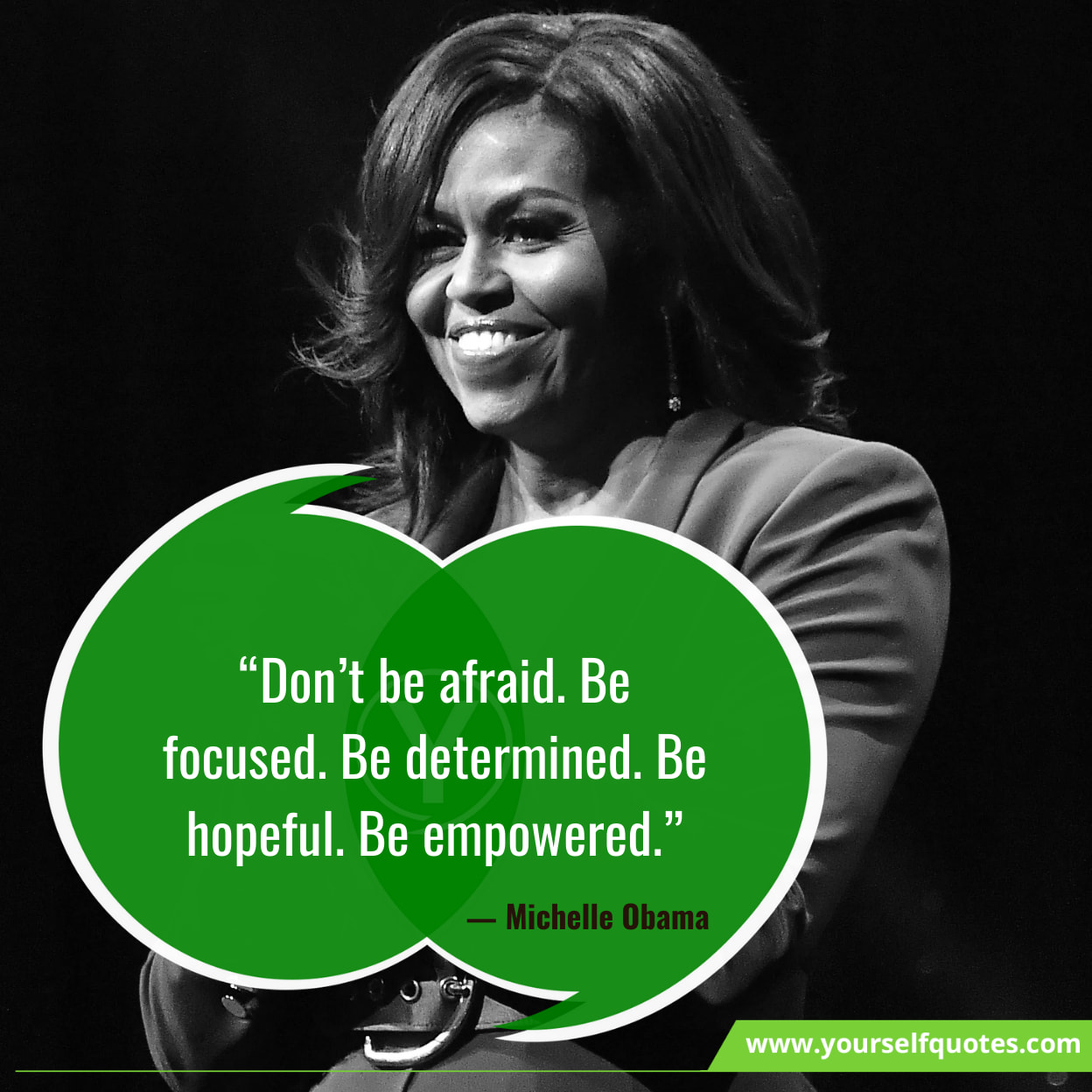 “Your story is what you have, what you will always have. It is something to own.” – Michelle Obama

“There are still many causes worth sacrificing for, so much history yet to be made.” ― Michelle Obama

“If my future were determined just by my performance on a standardized test, I wouldn’t be here. I guarantee you that.” ― Michelle Obama

“Whether you come from a council estate or a country estate, your success will be determined by your own confidence and fortitude.” ― Michelle Obama

“One of the lessons that I grew up with was to always stay true to yourself and never let what somebody else says distract you from your goals.” ― Michelle Obama

“You can’t make decisions based on fear and the possibility of what might happen.” ― Michelle Obama

“When they go low, we go high.” ― Michelle Obama

“When I hear about negative and false attacks, I really don’t invest any energy in them, because I know who I am.” ― Michelle Obama

“I’ve seen first-hand that being president doesn’t change who you are. It reveals who you are.” ― Michelle Obama

“We need to do a better job of putting ourselves higher on our own ‘to do list.” ― Michelle Obama

“Success isn’t about how much money you make. It’s about the difference you make in people’s lives.” – Michelle Obama 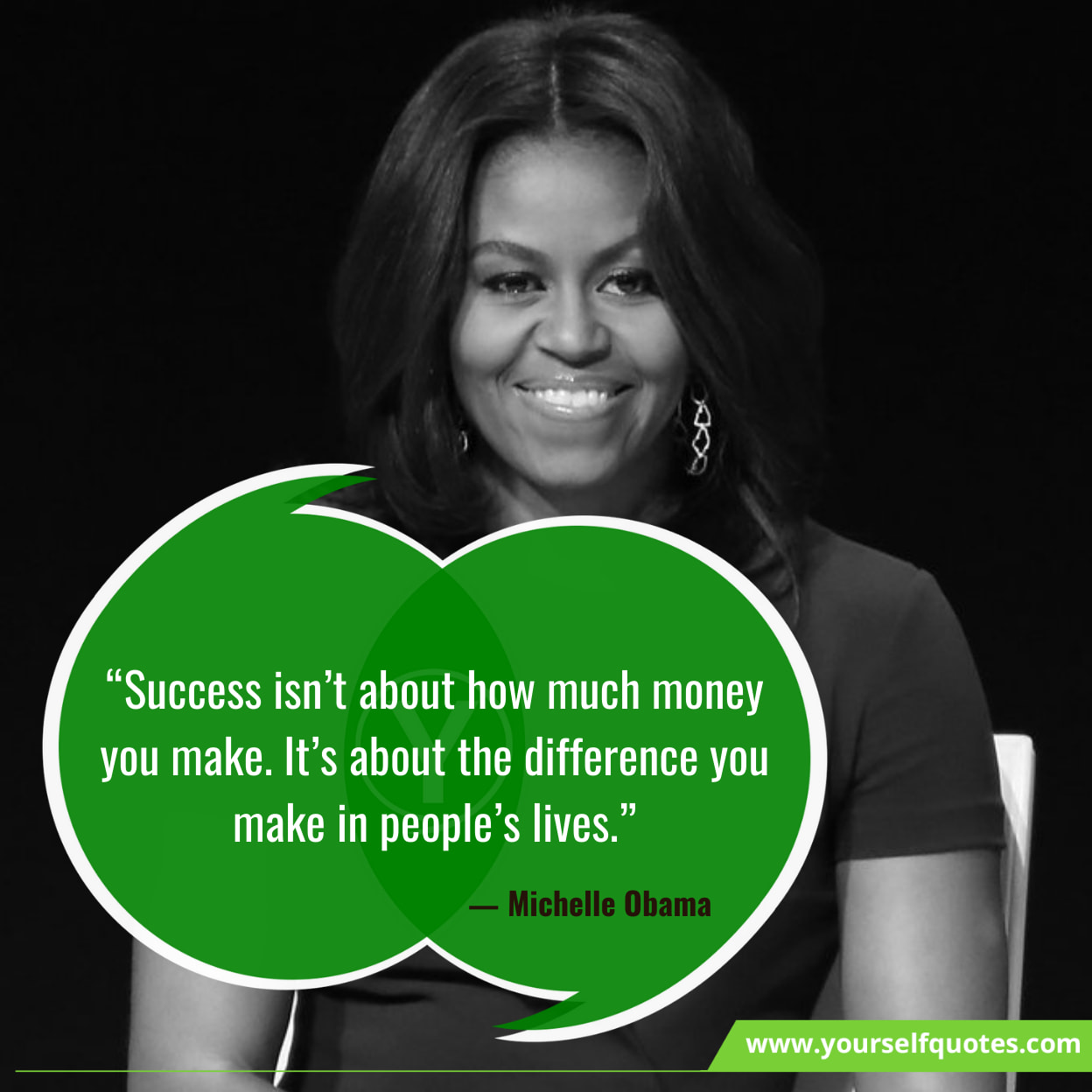 “There is no magic to achievement. It’s really about hard work, choices, and persistence.” – Michelle Obama

“If you are committed to doing what it takes, anything is possible. It’s up to you.” – Michelle Obama

“No country can ever truly flourish if it stifles the potential of its women and deprives itself of the contributions of half its citizen.” – Michelle Obama

“Success is only meaningful and enjoyable if it feels like your own.” – Michelle Obama

“Walk away from friendships that make you feel small and insecure and seek out people who inspire you and support you.” – Michelle Obama

“Real change comes from having enough comfort to be really honest and say something very uncomfortable.”

“We need to do a better job of putting ourselves higher on our own ‘to do’ list.” – Michelle Obama

“If my future were determined just by my performance on a standardized test, I wouldn’t be here. I guarantee you that.” – Michelle Obama

“I’ve seen firsthand that being president doesn’t change who you are. It reveals who you are.” – Michelle Obama

“Empower yourself with a good education.” – Michelle Obama 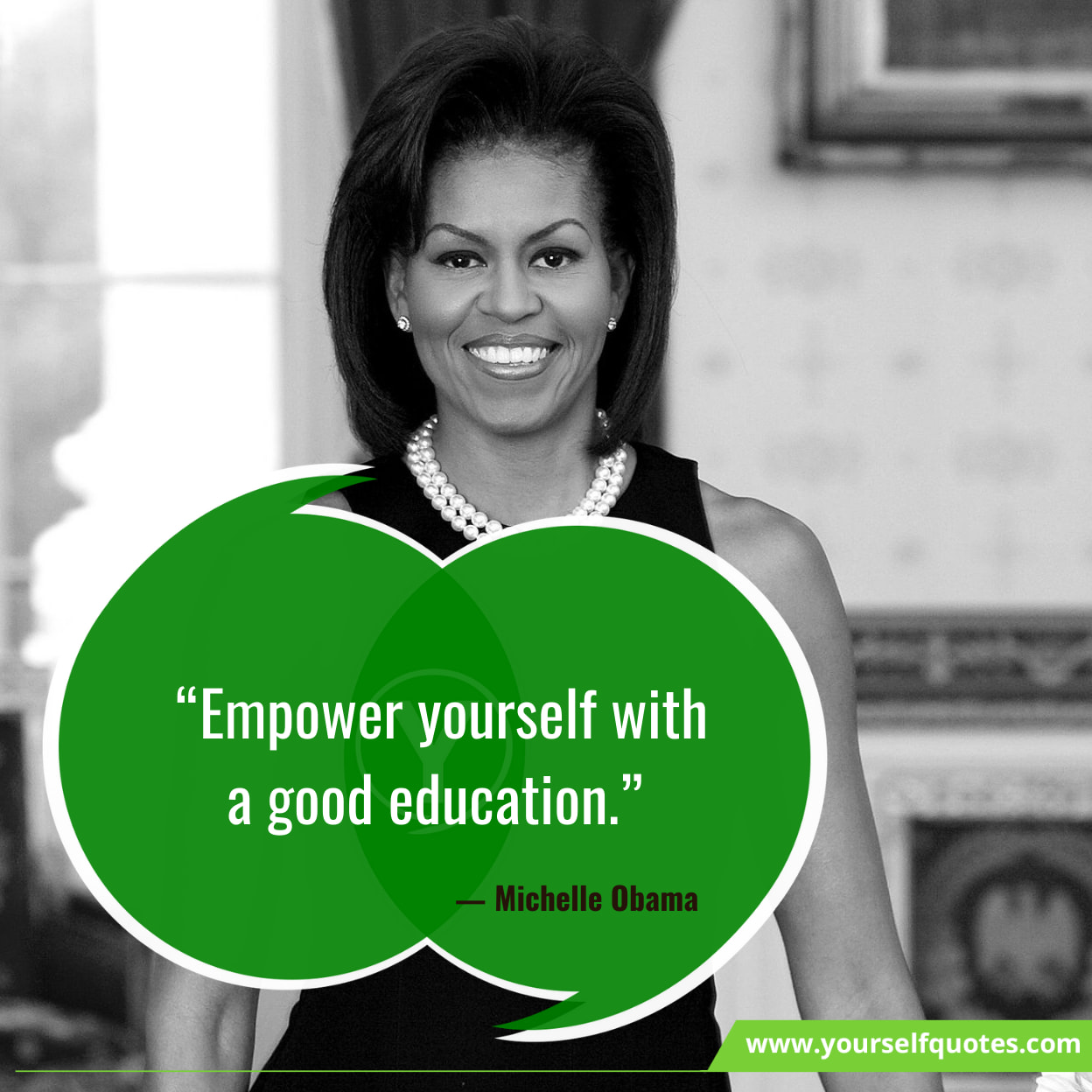 “The lesson being that in life, you control what you can.” ― Michelle Obama

“Just do what works for you, because there will always be someone who think differently…” ― Michelle Obama

“I have had to learn that my voice has value. And if I don’t use it, what’s the point of being in the room?” ― Michelle Obama

“The easiest way to disregard a woman’s voice is to package her as a scold.” ― Michelle Obama

“I was deeply, delightfully in love with a guy whose forceful intellect and ambition could possibly end up swallowing mine.” ― Michelle Obama

“I hate diversity workshops. “Real change comes from having enough comfort to be really honest and say something very uncomfortable.” ― Michelle Obama

“Focus on what you can control. Be a good person every day. Vote. Read. Treat one another kindly. Follow the law. Don’t tweet nasty stuff.” ― Michelle Obama

“No one, I realized, was going to look out for me unless I pushed for it.” ― Michelle Obama

“Most people were good people if you just treated them well.” ― Michelle Obama

“And there’s grace in being willing to know and hear others. This, for me, is how we become.” ― Michelle Obama

“Inspiration on its own was shallow; you had to back it up with hard work.” ― Michelle Obama

“It hurts to live after someone has died. It just does.” ― Michelle Obama

“It felt perverse, how the world just carried on. How everyone was still here, except for my Suzanne.” ― Michelle Obama

“The punches hurt, even if I understood that they had little to do with who I really was as a person.” ― Michelle Obama

“The more popular you became, the more haters you acquired.” ― Michelle Obama 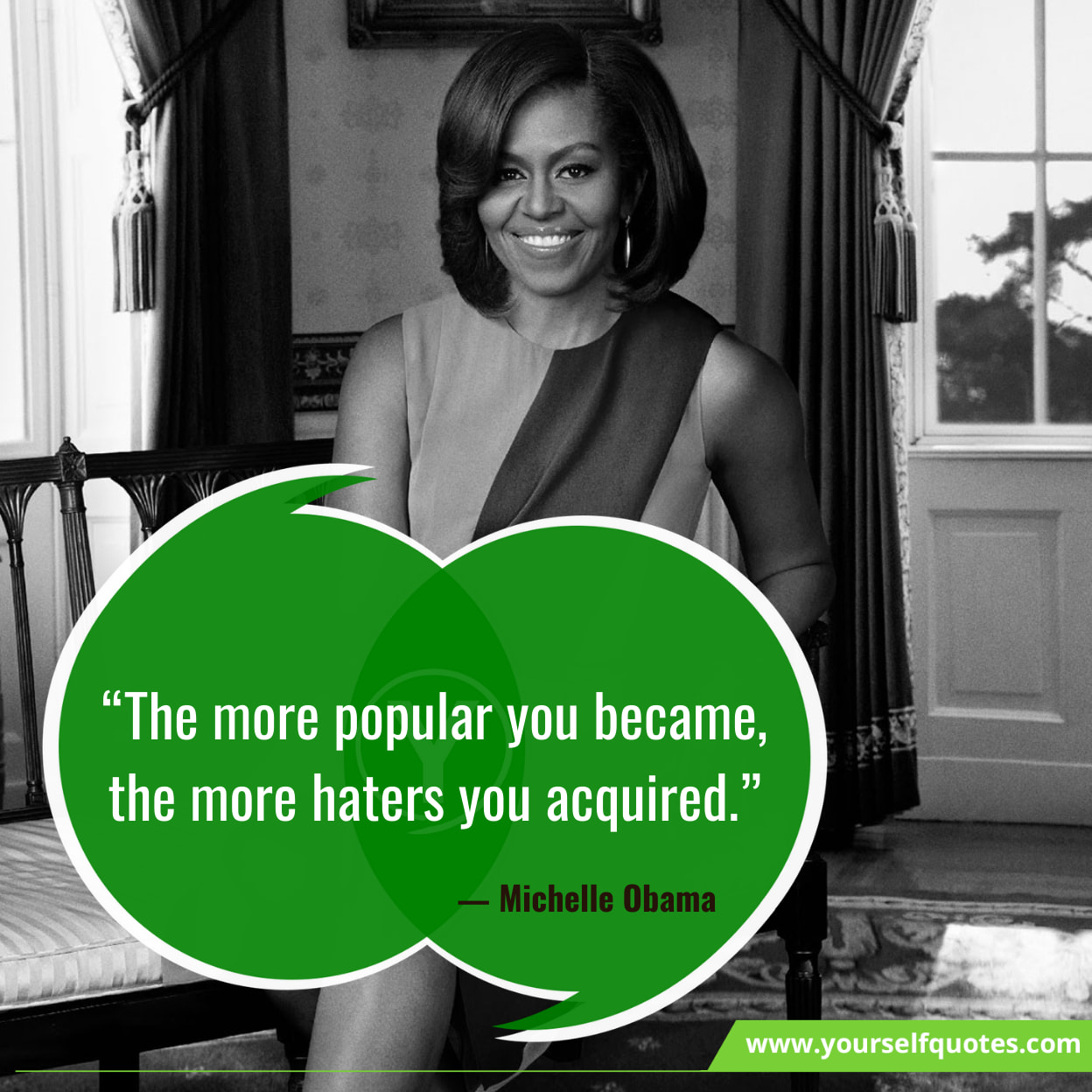 Michelle Obama, a strong inspiring lady wants us to be better citizens serving the world as we serve ourselves. She faced a lot of ups and downs in life, despite that she is full of integrity, loving, kind, and most importantly an individual who cares about her fellow human beings. To her, the most important job is the mother of the Presidential couple’s two children. Her life is full of courage & determination towards humanity and love towards the nation.

Her words brought a positive change in the outlook of people, so her quotes and saying became famous among them. Reach out to the most expressive Quotes by Michelle Obama only at Yourself Quotes.

Make your life impressive and courageous just like Michelle Obama, by sharing her inspiring quotes with your friends and family on social media and other platforms.

Which are your favorite Michelle Obama Quotes? Leave a comment below.

Deep Thinking of You Messages and Quotes for Him or Her