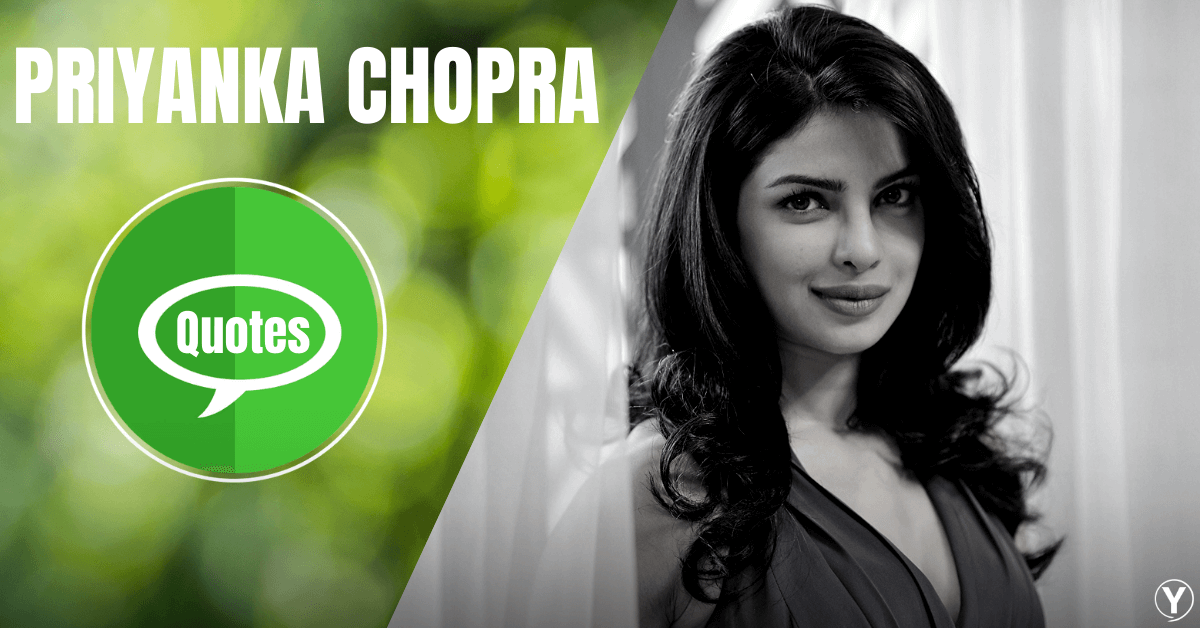 Priyanka Chopra also known as Pee Cee, is a famous Indian actress. She is a renowned singer, film producer and the winner of the “Miss World 2000 Pageant”. The beauty queen holds numerous awards and titles. In 2016 she has been honored with the Padma Shri title from the Government of India. The actress has moved to the next platform internationally.

The impressive actress was born on 18th July 1982 in Jharkhand, India. Mr. Ashok Chopra and Mrs. Madhu Chopra are proud parents of the actress. They both were physicians in the Indian Army. Her father was a Punjabi Hindu from Ambala. And her mother was from Jharkhand. She has one younger brother Siddharth Chopra. The famous actresses Parineeti Chopra, Meera Chopra, and Mannara Chopra are her cousins. The actress recently married an American singer and actor Nick Jonas last December 2018 at Jodhpur.

Chopra wished to join the Aeronautical Engineering course, but changed her mind and joined the Indian Film Industry. The actress made her debut in Bollywood through the movie The Hero: Love Story of a Spy (2003). After that, she can be seen in various movies such as Aitraaz, Mujhse Shaadi Karogi, Andaaz, and many more on the list.  In 2008, her movie Fashion, helped her win the National Film Award for Best Actress.

From 2015 to 2018, she entered Hollywood and marked a great footprint on an international platform. She played the role of Alex Parrish in the ABC thriller series Quantico. By working in this series she became the first South Asian to headline an American network drama series. The actress played supporting roles in some Hollywood movies such as Baywatch (2017) with Dwayne Johnson and Isn’t It Romantic (2019). 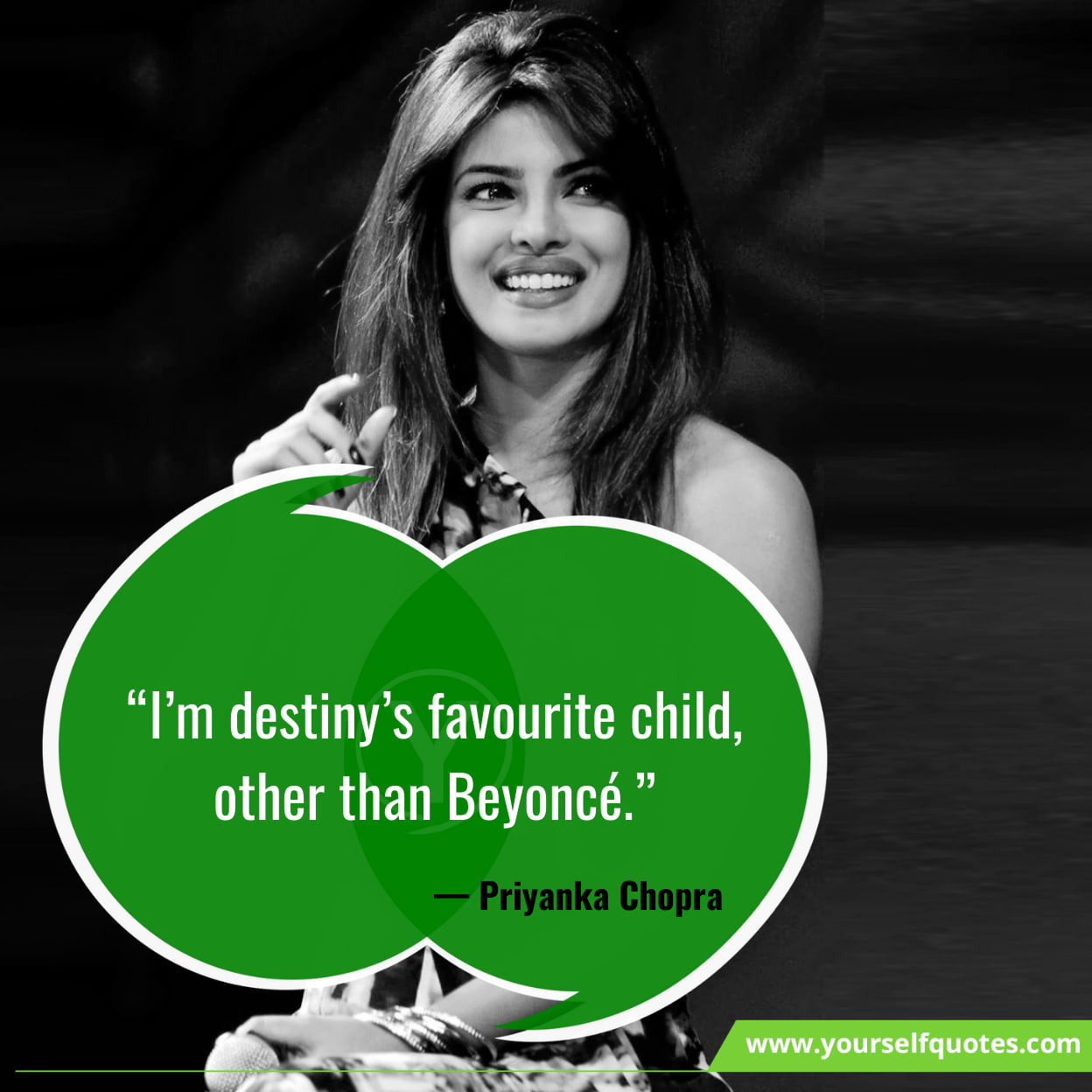 “People keep speculating about my personal life because I am evasive about it.” —  Priyanka Chopra

“After the eyes, it’s the feet. I like men with clean feet.” —  Priyanka Chopra

“I would rather spend my life with the right person than feel pressured and make a mistake.” —  Priyanka Chopra

“Don’t try to squeeze into a glass slipper. Instead, shatter the glass ceiling.” —  Priyanka Chopra

“I live with romance in my brain. I’m a true-blue Cancerian.” —  Priyanka Chopra

“My ambition when I was four years old was to be married.” —  Priyanka Chopra

“My family is my greatest strength and my biggest weakness.” —  Priyanka Chopra

“I think it’s great to be flawed. I am hugely flawed, and I like it this way. That’s the fun of life. You fall, get up, make mistakes, learn from them, be human and be you.” —  Priyanka Chopra

“Own your choices. Have the courage of conviction.” —  Priyanka Chopra 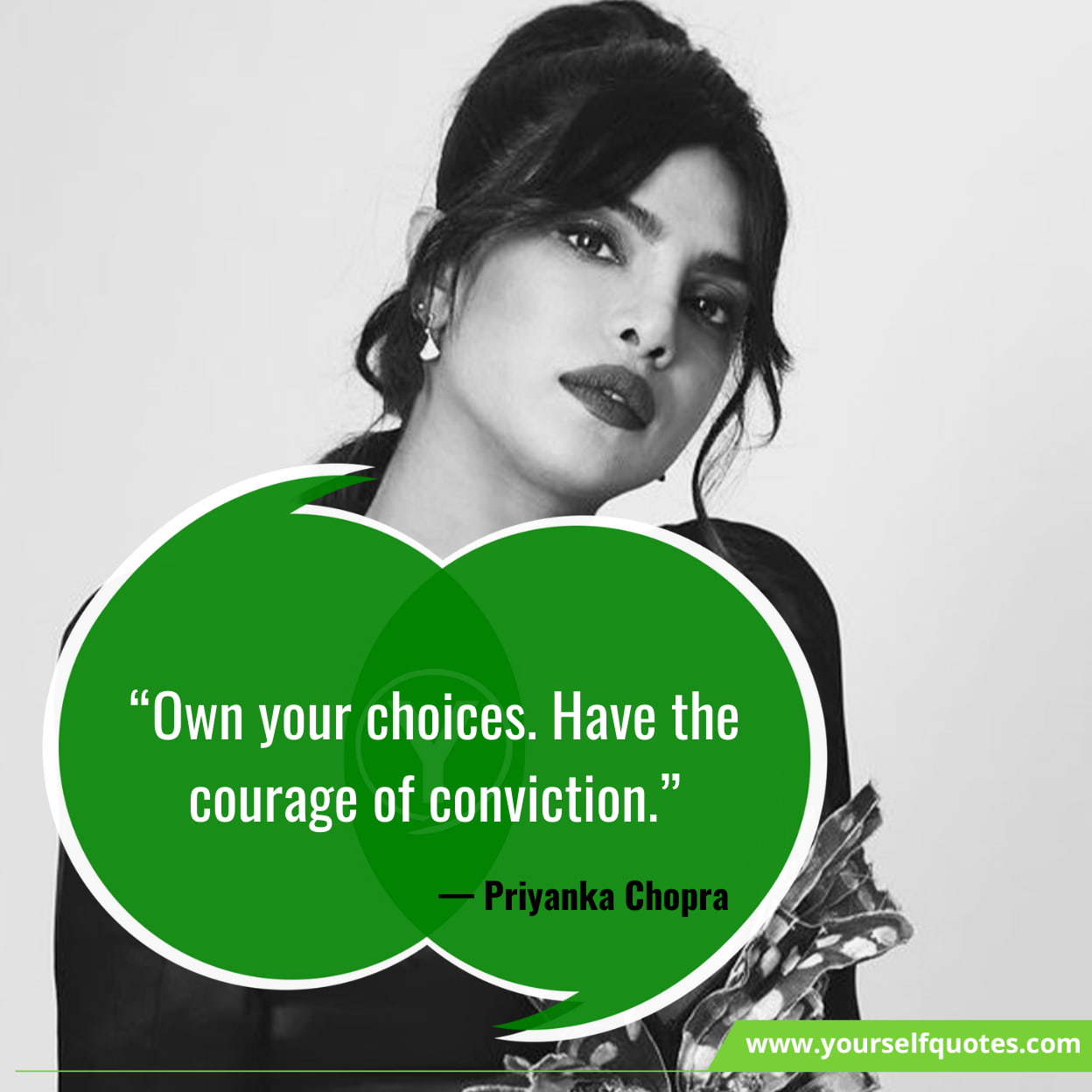 “I can’t eradicate poverty, but at least for the people around me, I can help make sure no child is denied a dream.” —  Priyanka Chopra

“As a girl, I am this stupid, emotional, very loyal, sort of believe-in-values-and-principals sort of girl.” —  Priyanka Chopra

“Ambition is a word associated with women negatively. People say she’s too ambitious. Why is that a bad thing?” —  Priyanka Chopra

“When someone asks me about my diet I feel terrible saying that I don’t really have one.” —  Priyanka Chopra

“I’m not usually a follower of trends – I like to set them a lot more. I don’t like things that people have done already, then it’s no fun for me to do it.” —  Priyanka Chopra

“My mom always said that when a woman is financially independent she has the ability to live life on her own terms.” —  Priyanka Chopra

“Courage comes from knowing your truth and standing up for it. Only then is it special.” —  Priyanka Chopra

“When life gives you lemons, make grape juice, then sit back and let people wonder how you did it.” —  Priyanka Chopra 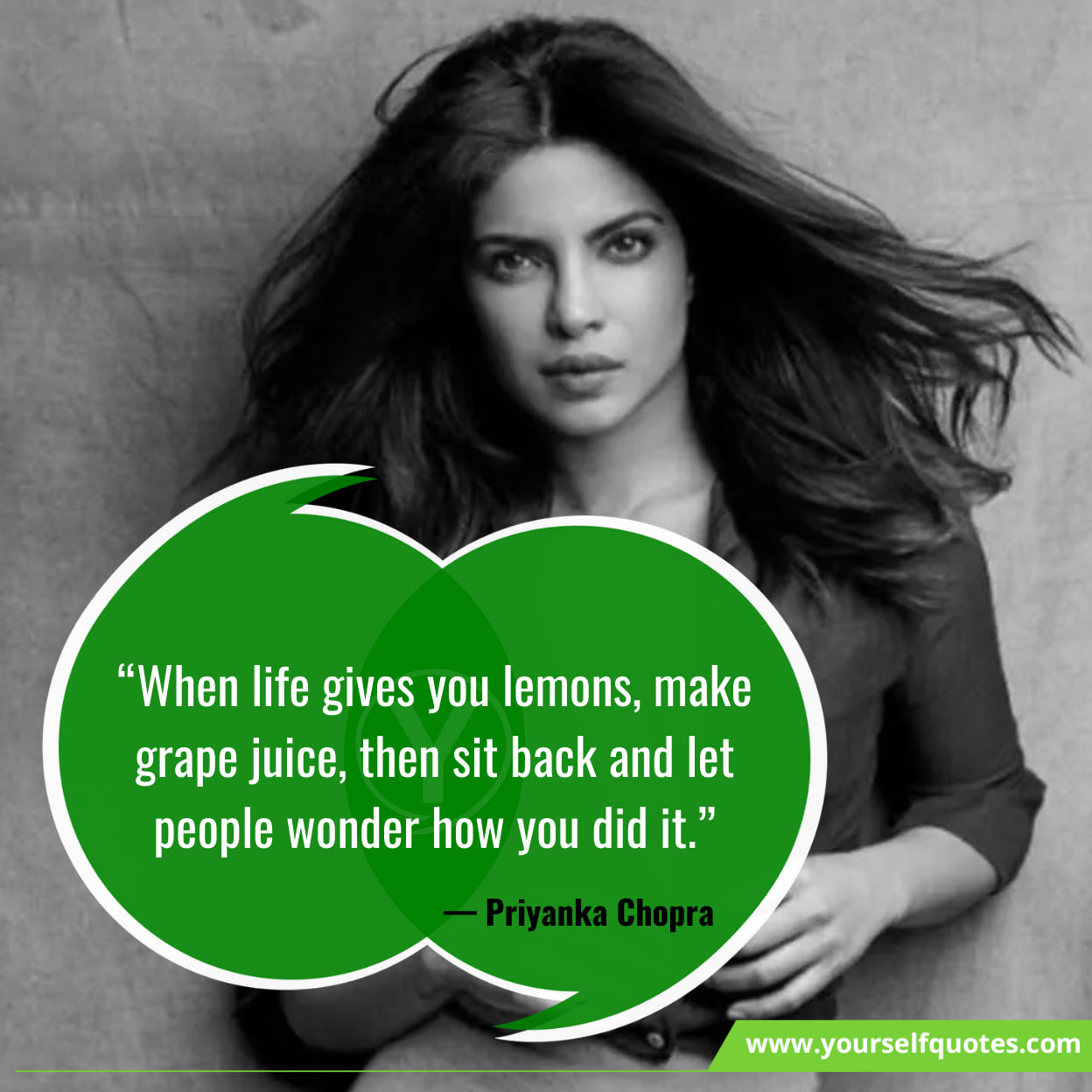 “Jealousy Is An Emotion I’ve Never Felt. Envy Maybe. Like I’d Be Envious Of Say, Rihanna Who Is So Young, So Cool, She’s Done Amazing Work. But I’ve Never Felt The Need To Be Jealous. Maybe, Because I’ve Been Lucky Enough To Have Contentment In What I Do.” —  Priyanka Chopra

“Short version: Own your choices. Or, as my mother must have told me hundreds of times growing up, “have the courage of conviction.” —  Priyanka Chopra

“From now on, if I was going to be an anomaly, I was going to be the shiniest damn anomaly around. I had no idea if I could pull off that sort of attitude or not, but I was sure as hell going to try.” —  Priyanka Chopra

“Had my professional do-my-best attitude somehow bled into my private behaviour? Was my reluctance to end a relationship I hadn’t been happy in for some time related to a fear that I hadn’t done my best to make it work? That I hadn’t done absolutely everything in my power, in fact?” —  Priyanka Chopra

“For me, one of the hardest things to accept in life is that control is an illusion.” —  Priyanka Chopra

“Black, brown, white, yellow – why are we always talking about colours? I’m a girl. I believe in a global community.” —  Priyanka Chopra

“Don’t be afraid of solitary journeys. Being responsible for your success and failures makes you stronger.” —  Priyanka Chopra

“You can be an absolute woman and also be smart and tough and not lose your femininity.” —  Priyanka Chopra 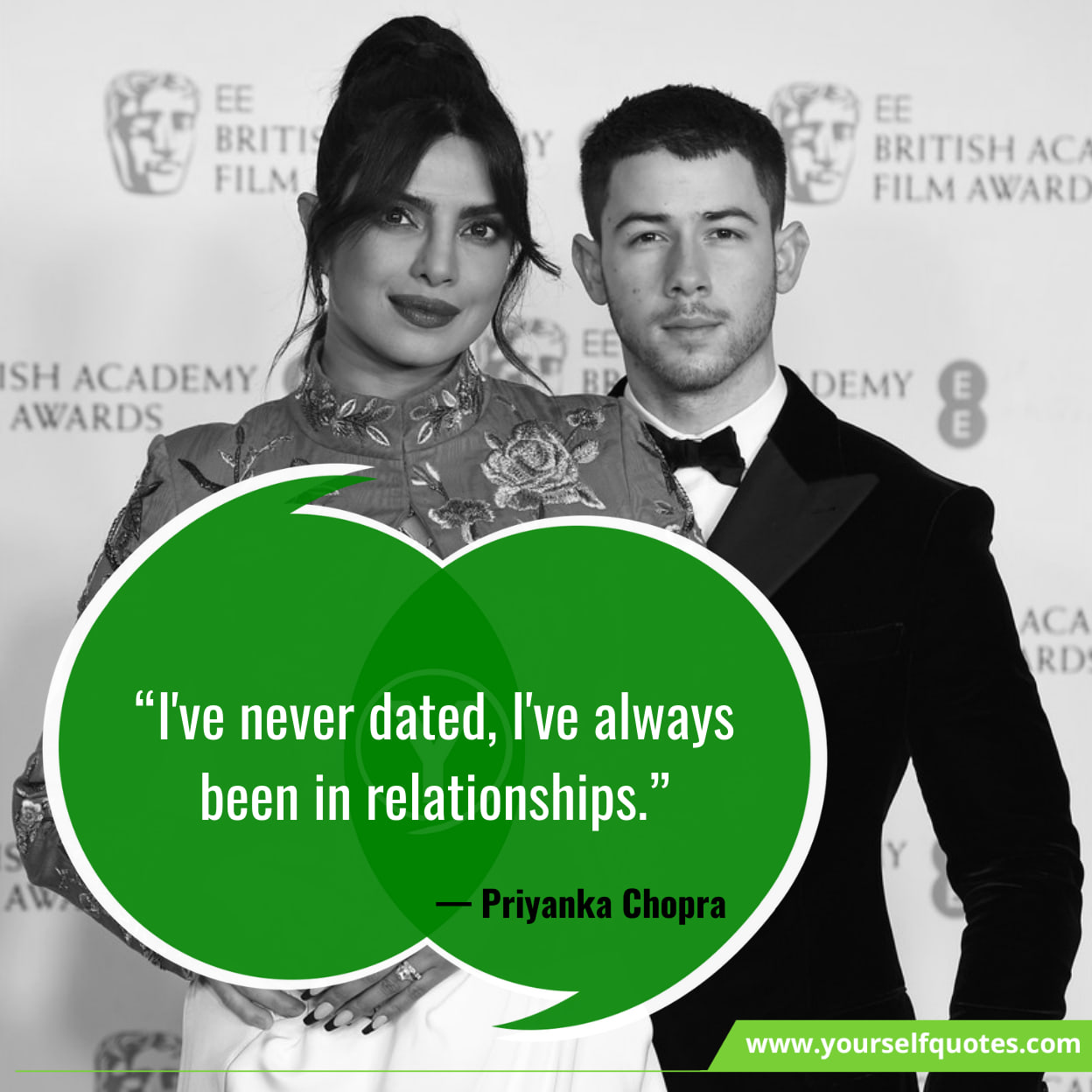 “Life just keeps moving. You have to keep your blinkers on. Find what you do best and keep moving.” —  Priyanka Chopra

“No matter where you go in life or who you get married to, you have to be financially independent, whether you use it or not.” —  Priyanka Chopra

“Don’t try to squeeze into a glass slipper. Instead, shatter the glass ceiling.” —  Priyanka Chopra

“Ambition is a word associated with women negatively. People say she’s too ambitious. Why is that a bad thing?” —  Priyanka Chopra

“You don’t know what curves life will throw at you. You should have the ability to take care of yourself and the people you love.” —  Priyanka Chopra

“The one thing I wear best is my confidence. That’s what I’d recommend to everyone.” —  Priyanka Chopra

“Courage comes from knowing your truth and standing up for it. Only then is it special.” —  Priyanka Chopra

“Any transition is easier if you believe in yourself and your talent.” —  Priyanka Chopra

“When I think about being the woman I want to be, I just want to be the best version of myself. And I use every opportunity that comes my way in that direction.” —  Priyanka Chopra

“Any transition is easier if you believe in yourself and your talent.” —  Priyanka Chopra

“I am a very private person. No one ever knows anything about me as I don’t think it is necessary. I tell people as much as I want them to know about me.” —  Priyanka Chopra

“You can be an absolute woman and also be smart and tough and not lose your femininity.” —  Priyanka Chopra

“I’ve been used to being my own boss for a really long time, so I don’t take to authority very well.” —  Priyanka Chopra

“It is in my nature to give the work I have all the discipline and due diligence that I am capable of.” —  Priyanka Chopra

“I’m trying to be global and trying to push us, as a society, to becoming colourblind, and so I’m very grateful to ABC for casting me in ‘Quantico.’ It was based on my merit, not on my ethnicity.” —  Priyanka Chopra

“I live with romance in my brain. I’m a true-blue Cancerian like that.” —  Priyanka Chopra

“There’s only one you. Understand who you are, your uniqueness.” —  Priyanka Chopra 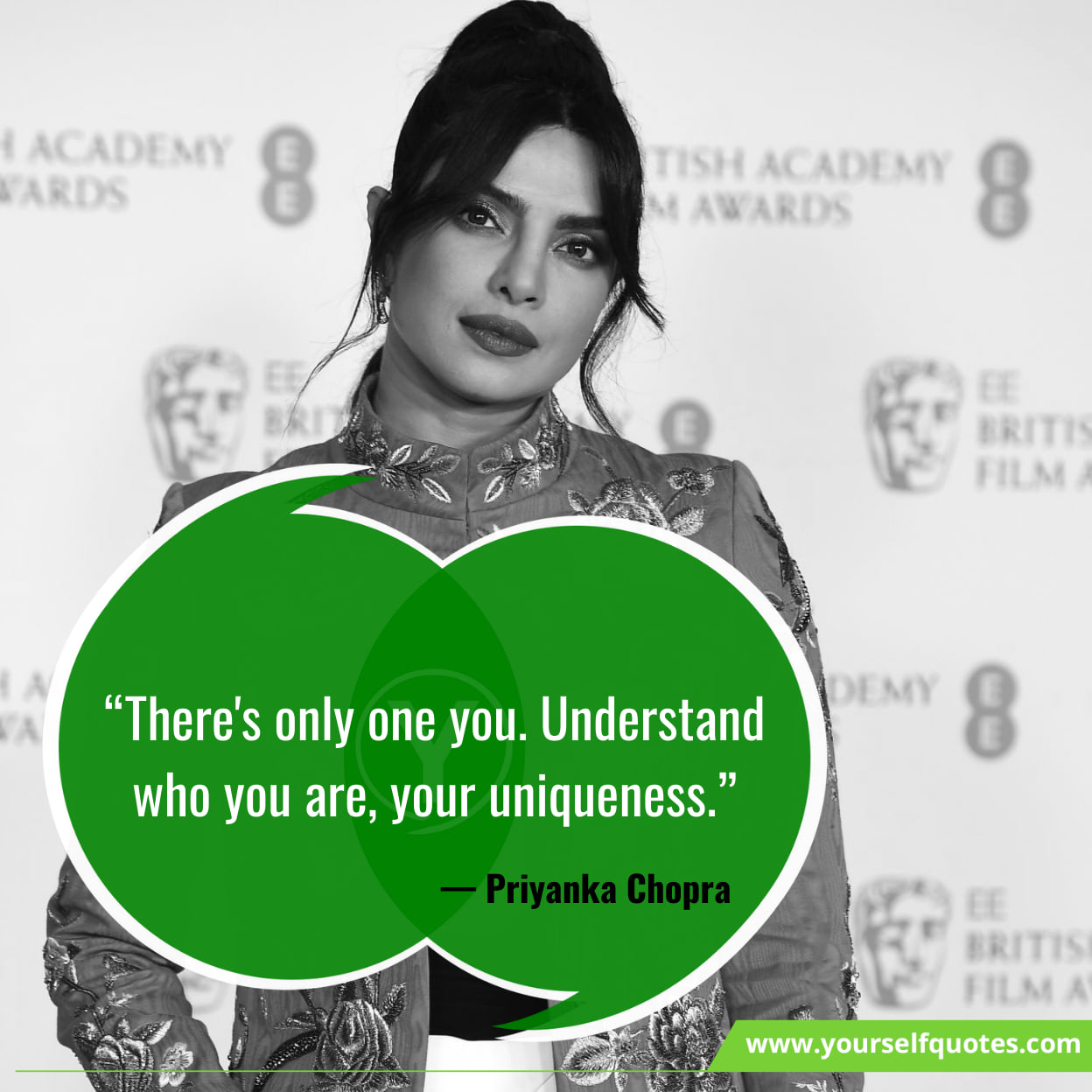 Priyanka Chopra is one of the famous Bollywood stars who has made a remarkable position Internationally. Apart from a successful actress, she is a renowned philanthropist. She has worked with UNICEF and was appointed as the national and global UNICEF Goodwill Ambassador for Child Rights in 2010 and 2016, respectively.

The actress is connected with many social causes. She is working for the promotion of social causes related to environment, health and education, women’s rights. Currently, she is also vocal about issues on gender equality and feminism, Chopra even supports various social causes through her own foundation “The Priyanka Chopra Foundation for Health and Education“. This foundation works in the field of providing support to unprivileged children across the country in the areas of Education and Health.

Priyanka Chopra’s Net Worth:– Her yearly income has been estimated at around $10 million and her net worth around $28 million.

Which are your favorite Priyanka Chopra Quotes? Leave a comment below.

Sadhguru’s Quotes on Life, Yoga and Meditation That Will Help Bring You Peace