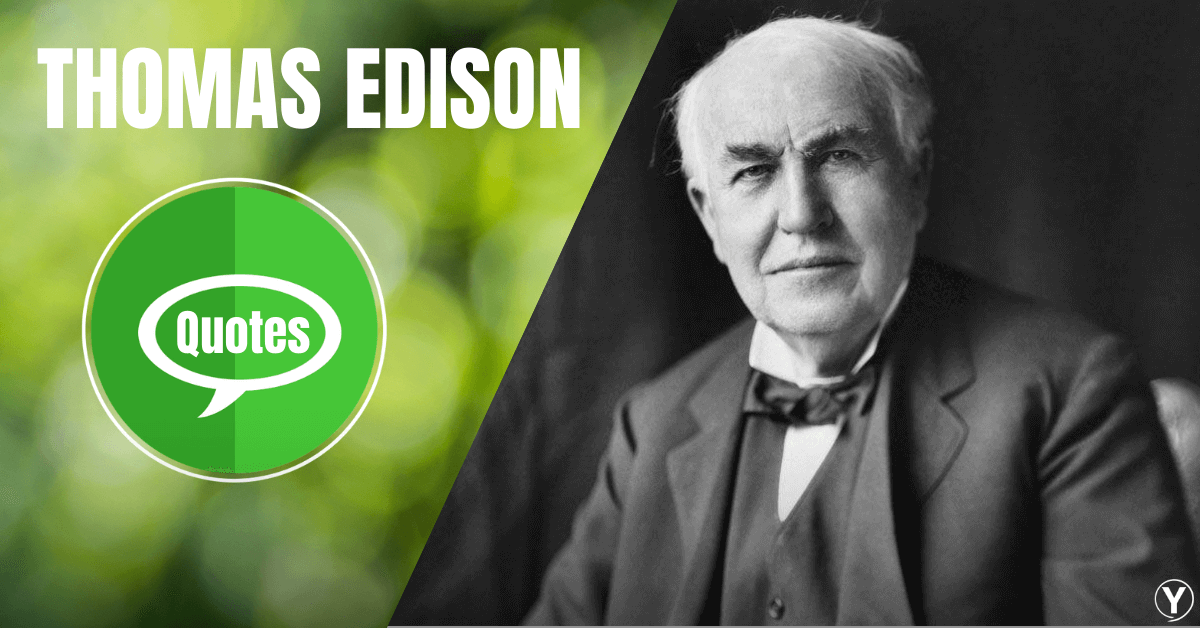 An American inventor and a savvy businessman, who invented the incandescent electric light bulb and the phonograph is none other than Thomas Edison. A man who contributed a lot in the field of science & technology and gave birth to many devices in fields such as electric power generation, mass communication, sound recording, motion pictures, and many others.

On 11th February 1847, Thomas Alva Edison was born in Milan, Ohio, United States. He was the youngest of the seven children of Samuel and Nancy Edison. His father, Samuel was an exiled political activist from Canada and his mother Nancy Edison was an accomplished school teacher.

Edison was diagnosed with scarlet fever as well as hearing disabilities at a very young age and nearly deaf as an adult.

In 1854, his family moved to Port Huron, Michigan where he attended public school for 2-3 months. His teacher titled him as a hyperactive child, prone to distraction. Then after his mother pulled him from school and started his schooling from home. At the age of 11, he showed a hungry appetite for knowledge, reading books on a wide range of subjects. During this age he Thomas Edison developed a process of self-education and started learning independently.

At the age of 12, Thomas Edison published his own small newspaper, “Grand Trunk Herald”. He also started conducting chemical experiments in a small laboratory that he set up at the train baggage car.

At the age of 22, in 1869, he moved on to New York, and there he developed his first invention, an improved stock ticker called the Universal Stock Printer, which synchronized several stock tickers’ transactions.  In 18877, he developed a method for recording sound; the phonograph.

Thomas Edison married a 16-year-old Mary Stilwell, in 1871, who was an employee at one of his business. He had three children Marion, Thomas, and William.

“The greatest invention in the world is the mind of a child.” – Thomas Edison

“Opportunity is missed because it’s dressed in overalls and looks like work.” – Thomas Edison

“Many of life’s failures are people who did not realize how close they were to success when.” – Thomas Edison

“Our greatest weakness lies in giving up. The most certain way to succeed is always to try just one more time.” – Thomas Edison

“The doctor of the future will no longer treat the human frame with drugs, but rather will cure and prevent disease with nutrition.” – Thomas Edison

“To invent, you need a good imagination and a pile of junk.” – Thomas Edison

“Vision without execution is a hallucination.” – Thomas Edison

“Time is really the only capital that any human being has and the things that he can least afford to waste or lose.” – Thomas Edison

“Restlessness and discontent are the first necessities of progress.” – Thomas Edison

“To my mind the old masters are not art; their value is in their scarcity.” – Thomas Edison

“If we did all the things we are capable of doing, we would literally astound ourselves.” – Thomas Edison

“Just because something doesn’t do what you planned it to do doesn’t mean it’s useless.” – Thomas Edison

“I am not discouraged, because every wrong attempt discarded is another step forward.” – Thomas Edison

“Courage is everything. “Be courageous. I have seen many depressions in business.” – Thomas Edison

“The successful person makes a habit of doing what the failing person doesn’t like to do.” – Thomas Edison

Thomas Edison a man who endured until he achieved success, and he didn’t stop until he got what he wanted. Most of us give up in life when it seems like failure all around and no hope. But Thomas Edison was a man of hope & strong belief & determination.

At the age of 84, on 18th October 1931, Thomas Edison died in his home, at Glenmont, in West Orange, New Jersey. People in different countries dimmed their area & home lights or turned off their electrical power to commemorate his passing.

He continued the race of life and never gave up in life. His words proved to us that we should be courageous & intrinsically motivated in life to win each & every race that may come up.

Share out the most motivational Quotes by Thomas Edison that will motivate you intensely and will become an inspiration for others.