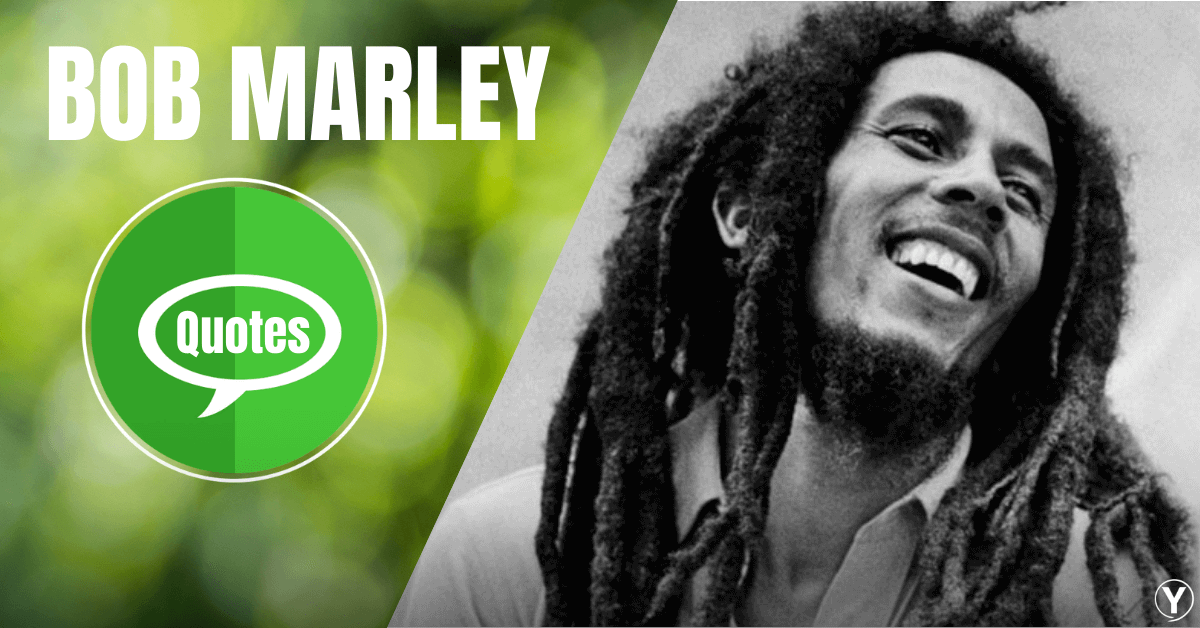 Robert Nesta Marley, OM is popularly known as Bob Marley was one of the most entertaining and performing Jamaican singers and songwriters. He was counted as one of the pioneers of reggae. His musical career consists of a mixture of reggae, ska, and rocksteady as well as a smooth and distinctive voice and songwriting style. He was a sole person behind the popularization of Jamaican music worldwide, and this made him a global figure in popular culture for over a decade.

Bob Marley Family: Bob was born to Norval Sinclair Marley and Cedella Booker. Norval Marley was a white Jamaican originally from Sussex, who claimed to have been a captain in the Royal Marines and Cedella Booker was an Afro-Jamaican.

In 1963, Bob began his professional musical career after forming Bob Marley and the Walkers. In 1965, the group released its debut studio album ‘The Wailing Wailers’ which contained the single “One Love/People Get Ready”. This song became immensely popular. And this rose the group’s success as a rising figure in reggae. Then the group came up with many other successful numbers and climbed up on worldwide music charts. Other hit tracks were The Best of The Wailers, Catch a Fire, Burnin’, Natty Dread, Exodus, and many others.

Bob is the most popular and at the same time the most misunderstood personality in modern culture. A statue was inaugurated, next to the national stadium on Arthur Wint Drive in Kingston to commemorate him. He married Alpharita Constantia “Rita” Anderson in Kingston, Jamaica, on 10 February 1966. Marley had many children: four with his wife Rita, two adopted from Rita’s previous relationships, and several others with different women. The Bob Marley official website acknowledges 11 children.

Bob Marley is a very interesting personality to know about. So let’s explore some of the most exciting Bob Marley Quotes to become more familiar with his personality. 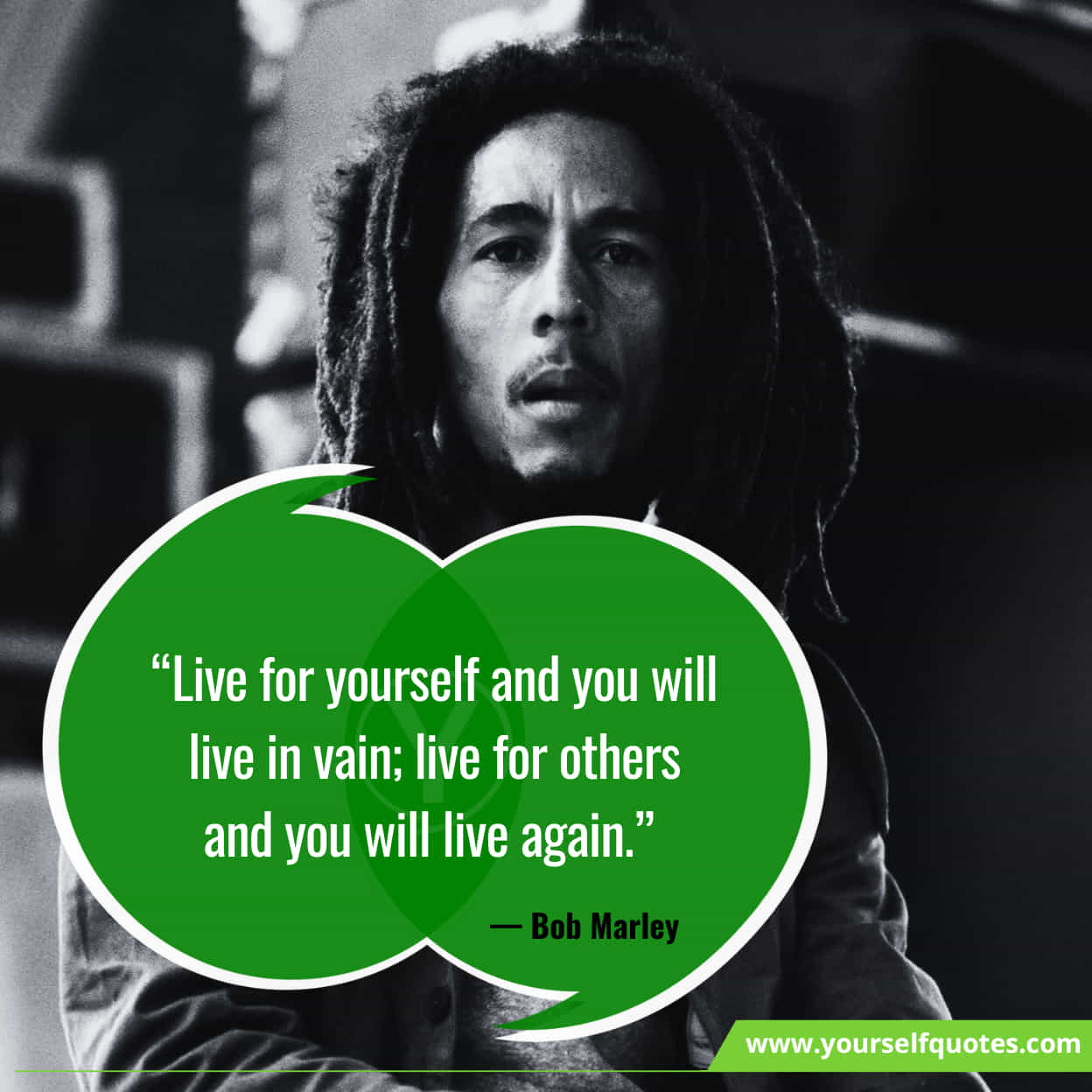 “Open your eyes, look within. Are you satisfied with the life you’re living?” — Bob Marley

“One good thing about music, when it hits you, you feel no pain.” — Bob Marley

“I don’t believe in death, neither in flesh nor in spirit.” — Bob Marley

“When one door is closed, don’t you know, another is open.” — Bob Marley

“Don’t gain the world and lose your soul. Wisdom is better than silver and gold.” — Bob Marley

“You never know how strong you are, until being strong is your only choice.” — Bob Marley 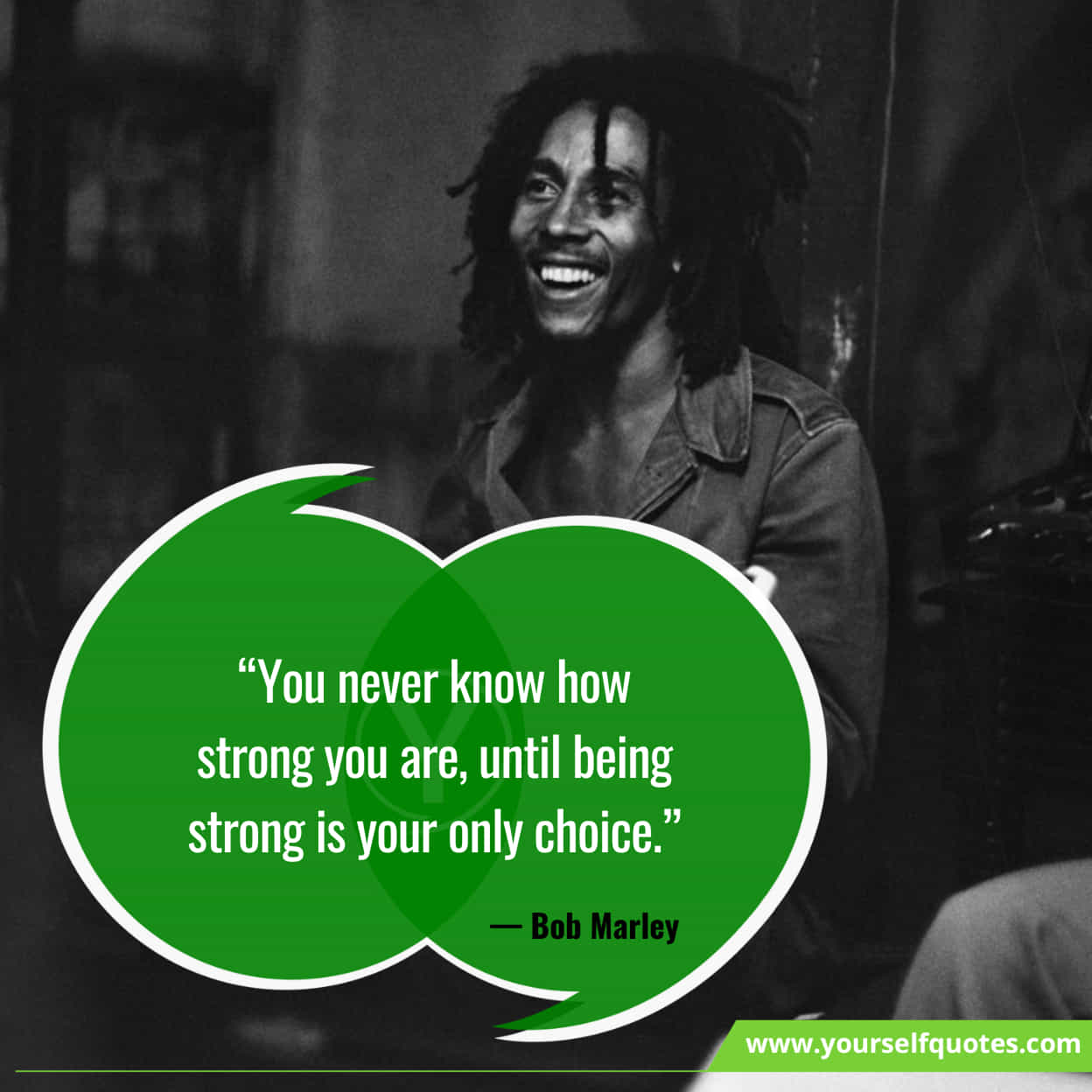 “Don’t worry about a thing, coz every little thing is gonna be alright.” — Bob Marley

“The truth is, everyone is going to hurt you. You just got to find the ones worth suffering for.” — Bob Marley

“Find Your Universe. “Man is a universe within himself.” — Bob Marley

“Every man gotta right to decide his own destiny.” — Bob Marley 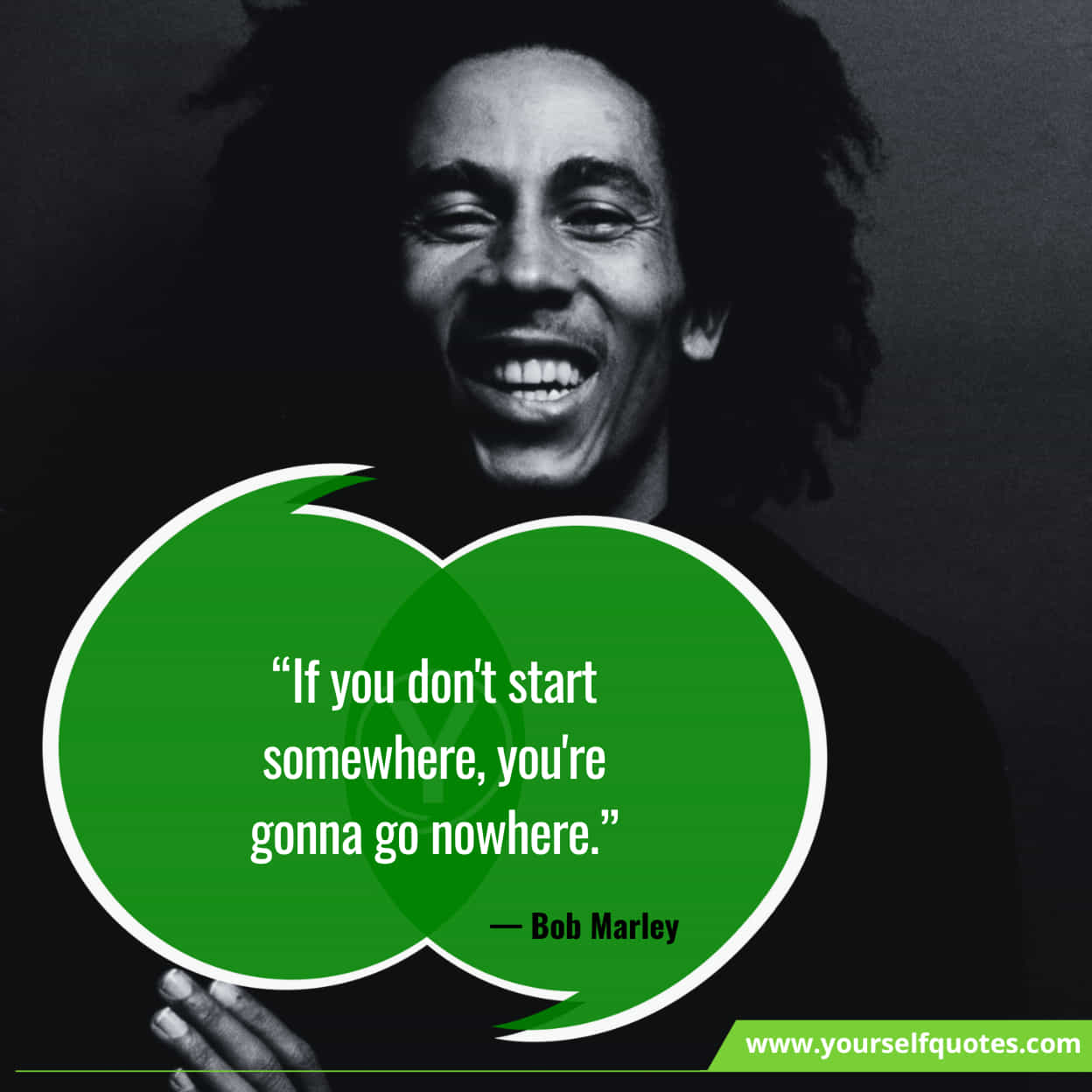 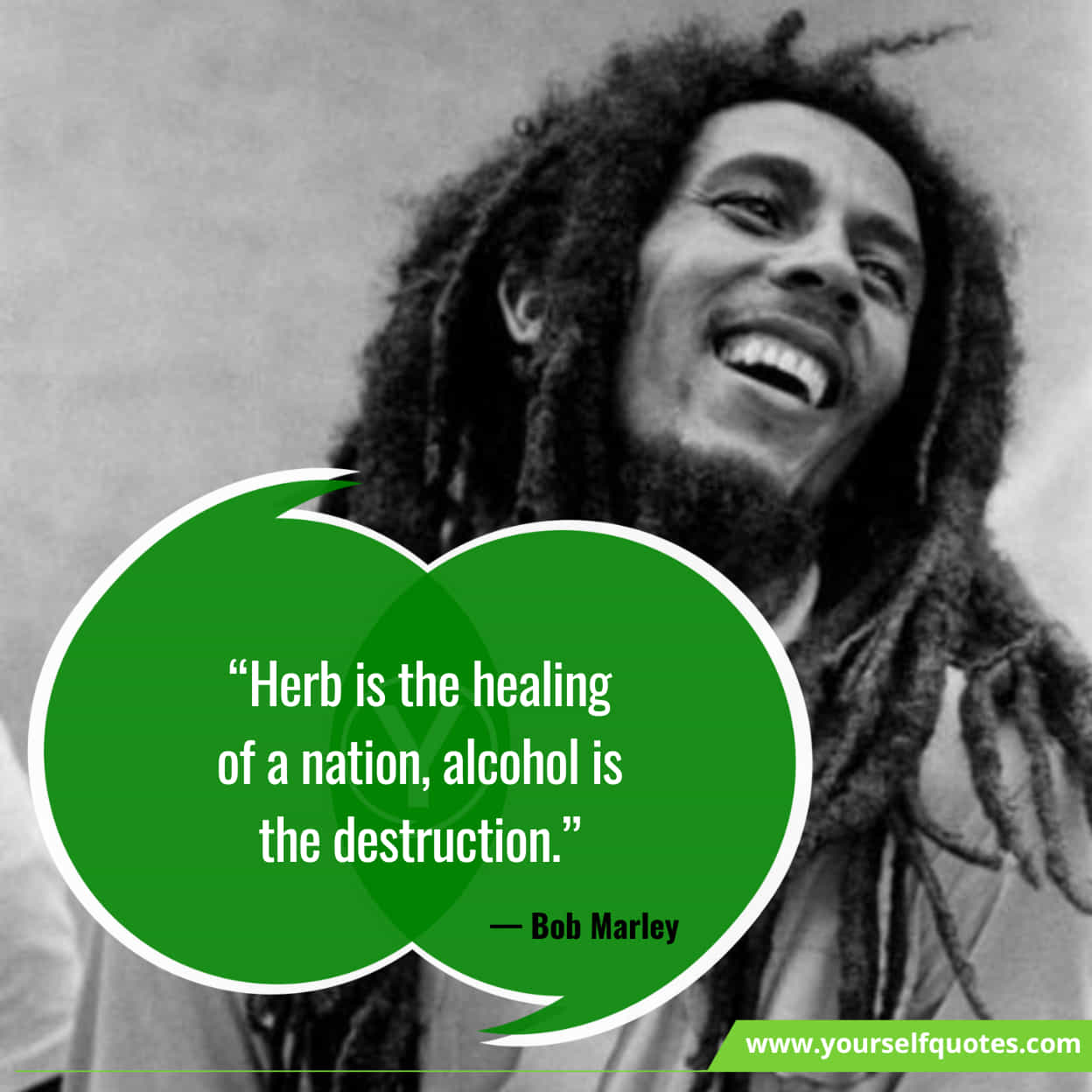 “Money is numbers and numbers never end. If it takes money to be happy, your search for happiness will never end.” — Bob Marley 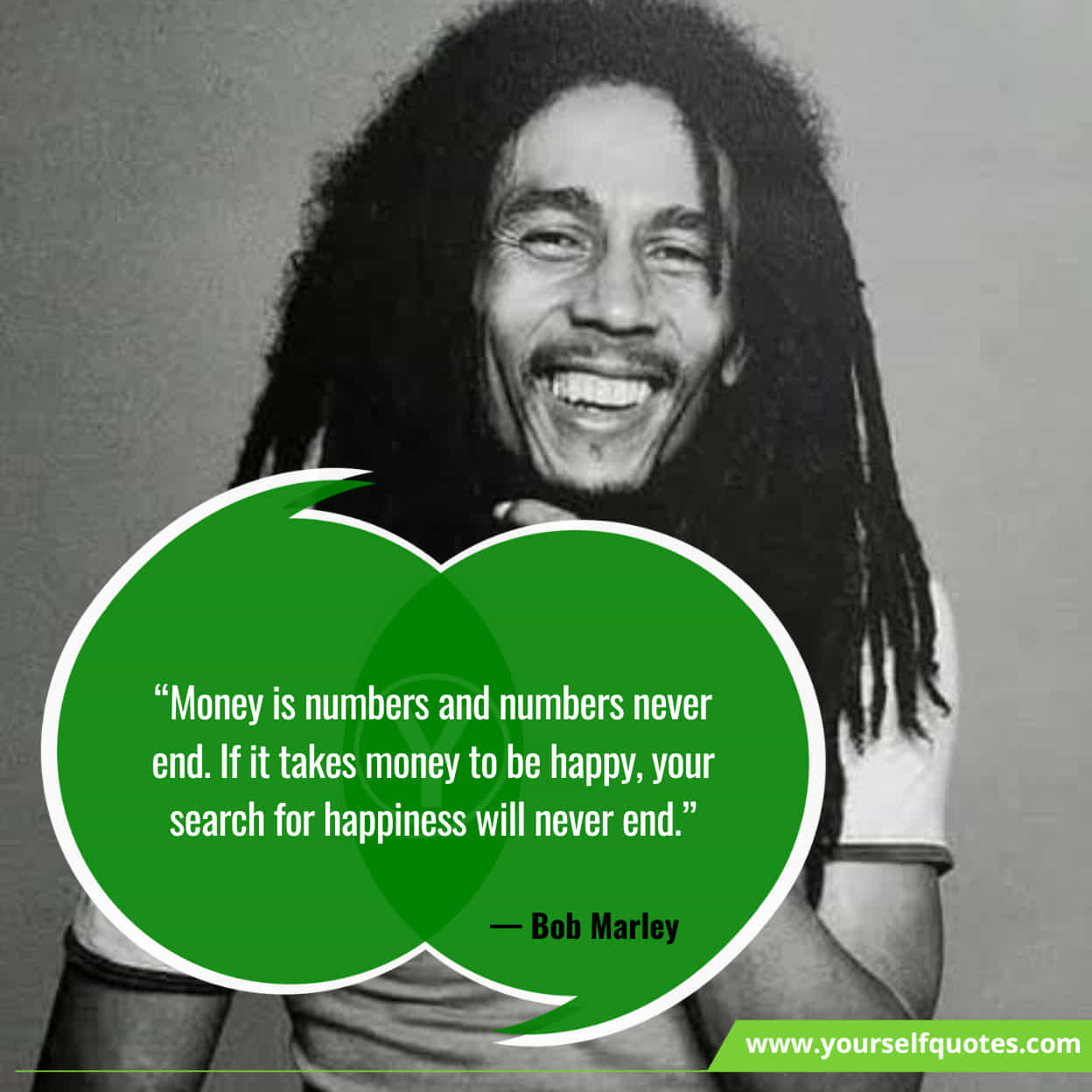 “Every day the bucket a-go a well, one day the bottom a-go drop out.” — Bob Marley

“Everything is political. I will never be a politician or even think political. ” — Bob Marley

“Have no fear for atomic energy, ’cause none of them can stop the time.” — Bob Marley

“Better to die fighting for freedom than be a prisoner all the days of your life.” — Bob Marley 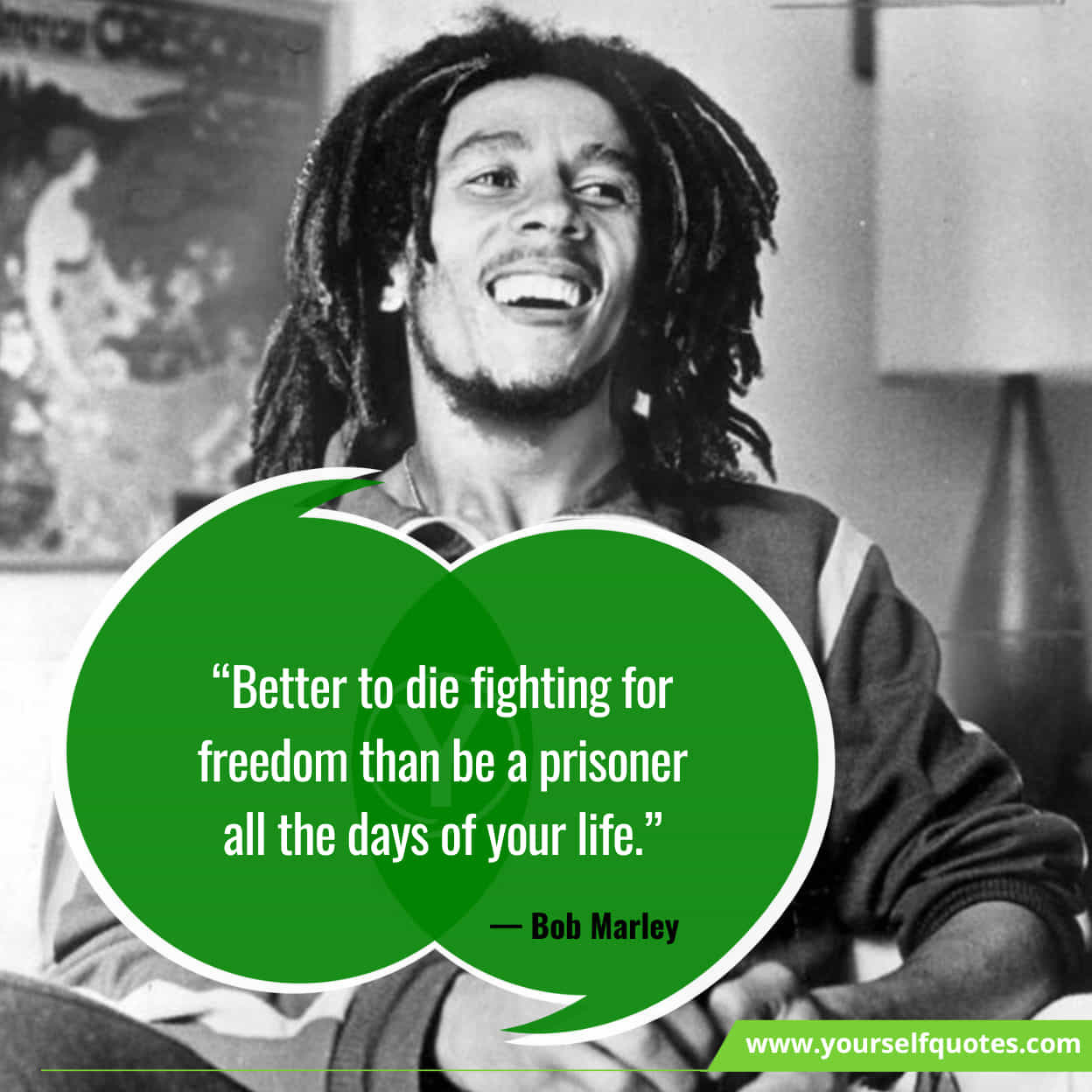 “I’ve been here before and will come again, but I’m not going this trip through.” — Bob Marley

“Love hard when there is love to be had. Because perfect guys don’t exist, but there’s always one guy that is perfect for you.” — Bob Marley 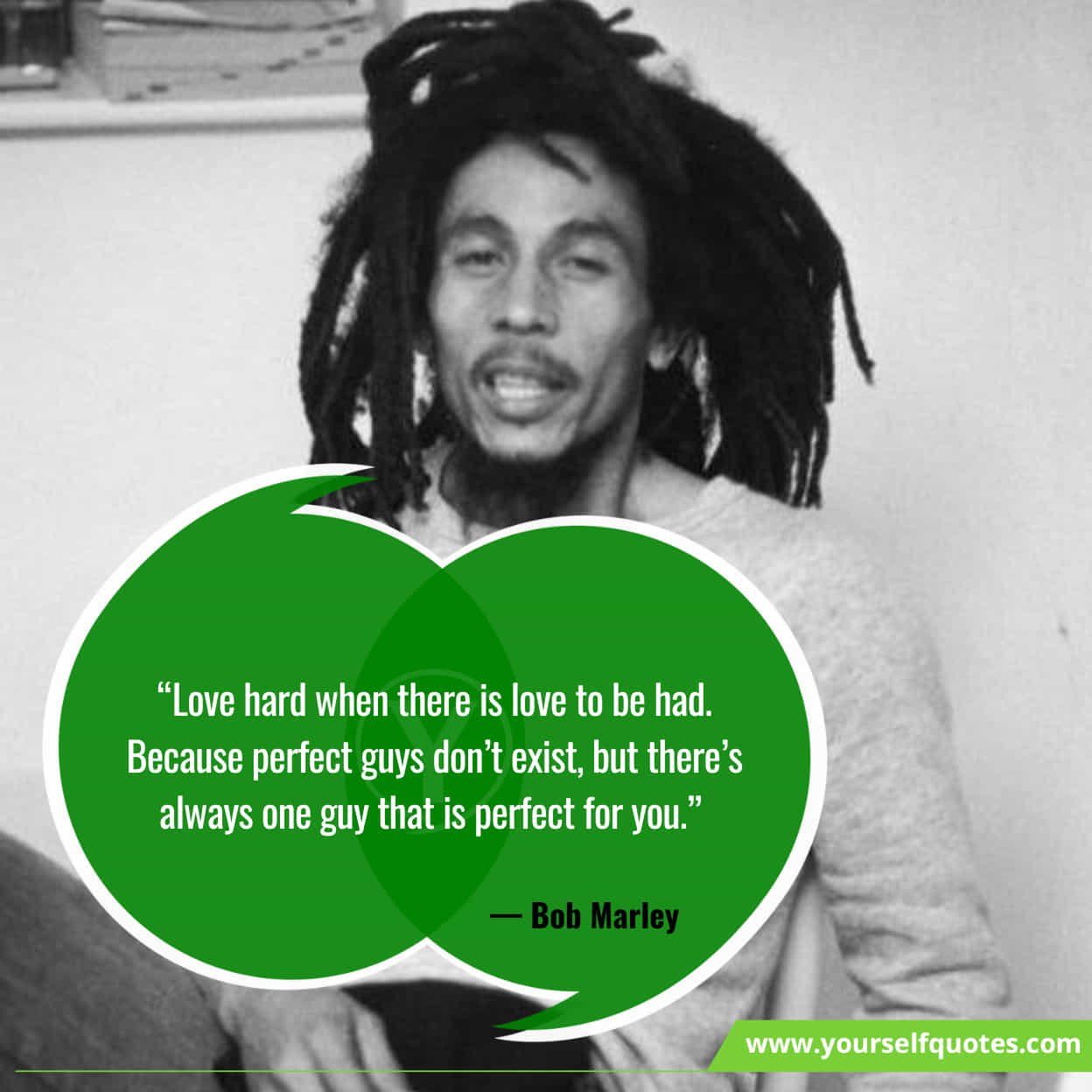 “The people who were trying to make this world worse are not taking the day off. ” — Bob Marley

“Though the road’s been rocky it sure feels good to me.” — Bob Marley

“Road of life is rocky and you may stumble too, so while you talk about me, someone else is judging you.” — Bob Marley 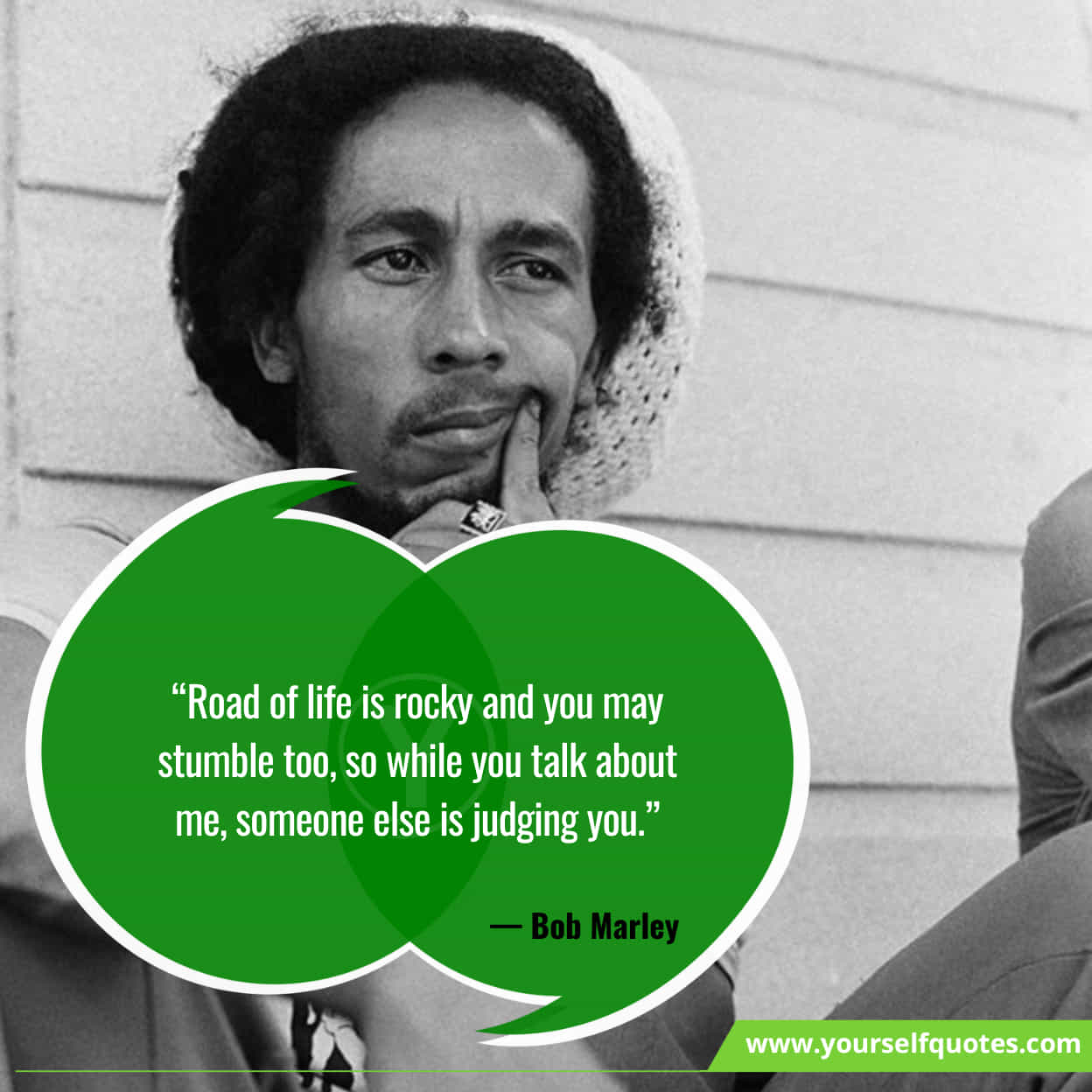 “Truth is the light, so you never give up the fight.” — Bob Marley

“When one door is closed, many more is open.” — Bob Marley

“When the race gets hard to run. It means you just can’t take the peace.” — Bob Marley

“When the root is strong, the fruit is sweet.” — Bob Marley

“You can’t find the right roads when the streets are paved.” — Bob Marley

“Emancipate yourself from mental slavery. None but ourselves can free our minds.” — Bob Marley 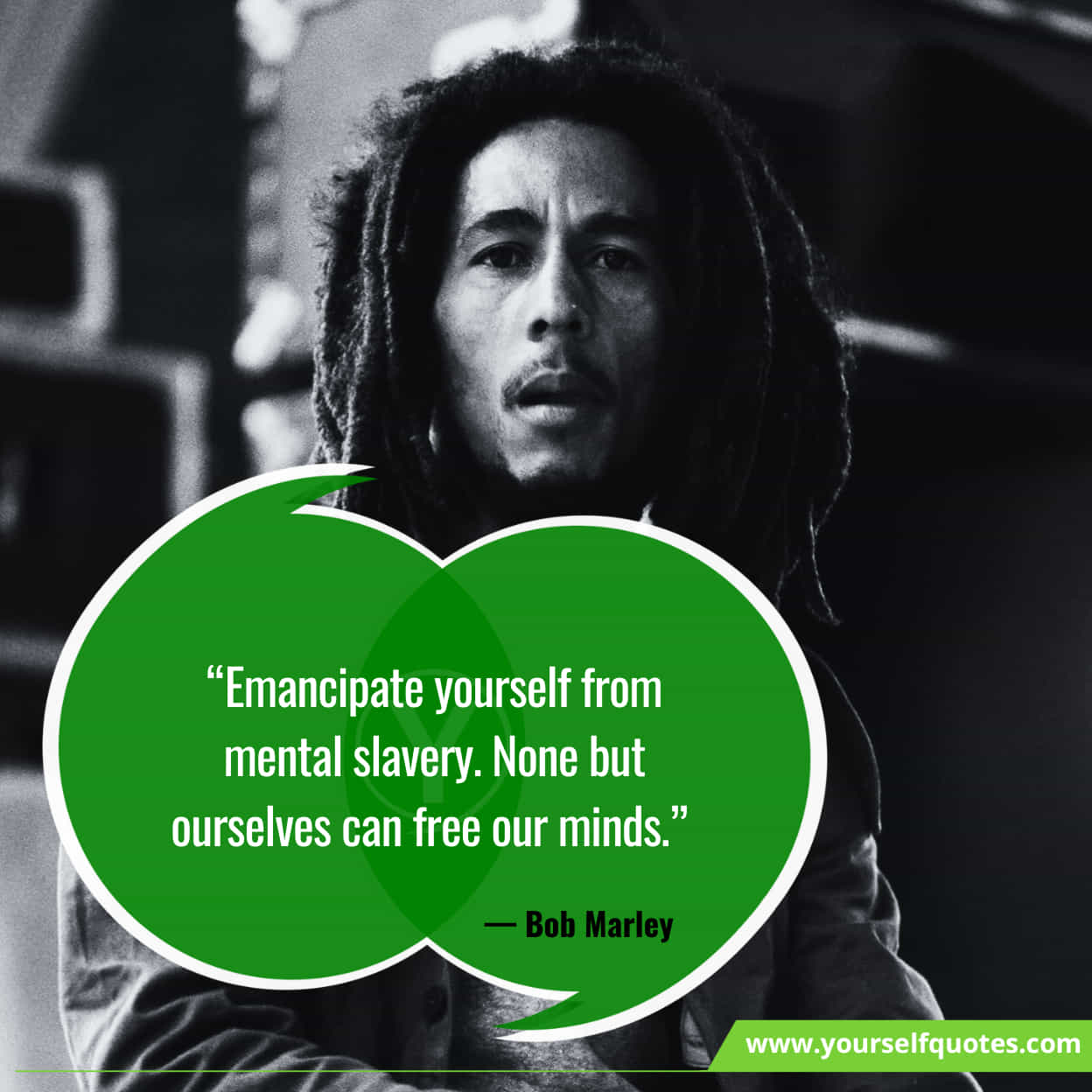 “I know that I’m not perfect and that I don’t claim to be, so before you point your fingers make sure your hands are clean.” — Bob Marley

“If puss and dog can get together, why can’t we love one another.” — Bob Marley

“If you get down and quarrel every day, you’re saying prayers to the devil, I say.” — Bob Marley

“My music fights against the system that teaches to live and die.” — Bob Marley

“Overcome the devils with a thing called love.” — Bob Marley

“She may not be the most popular or prettiest, but if you love her, and she makes you smile… what else matters.” — Bob Marley

“The biggest coward of a man is to awaken the love of a woman without the intention of loving her.” — Bob Marley

“One love, one heart, Let’s get together and feel alright.” — Bob Marley

“The trust is, everyone is going to hurt you. You just got to find the ones worth suffering for.” — Bob Marley 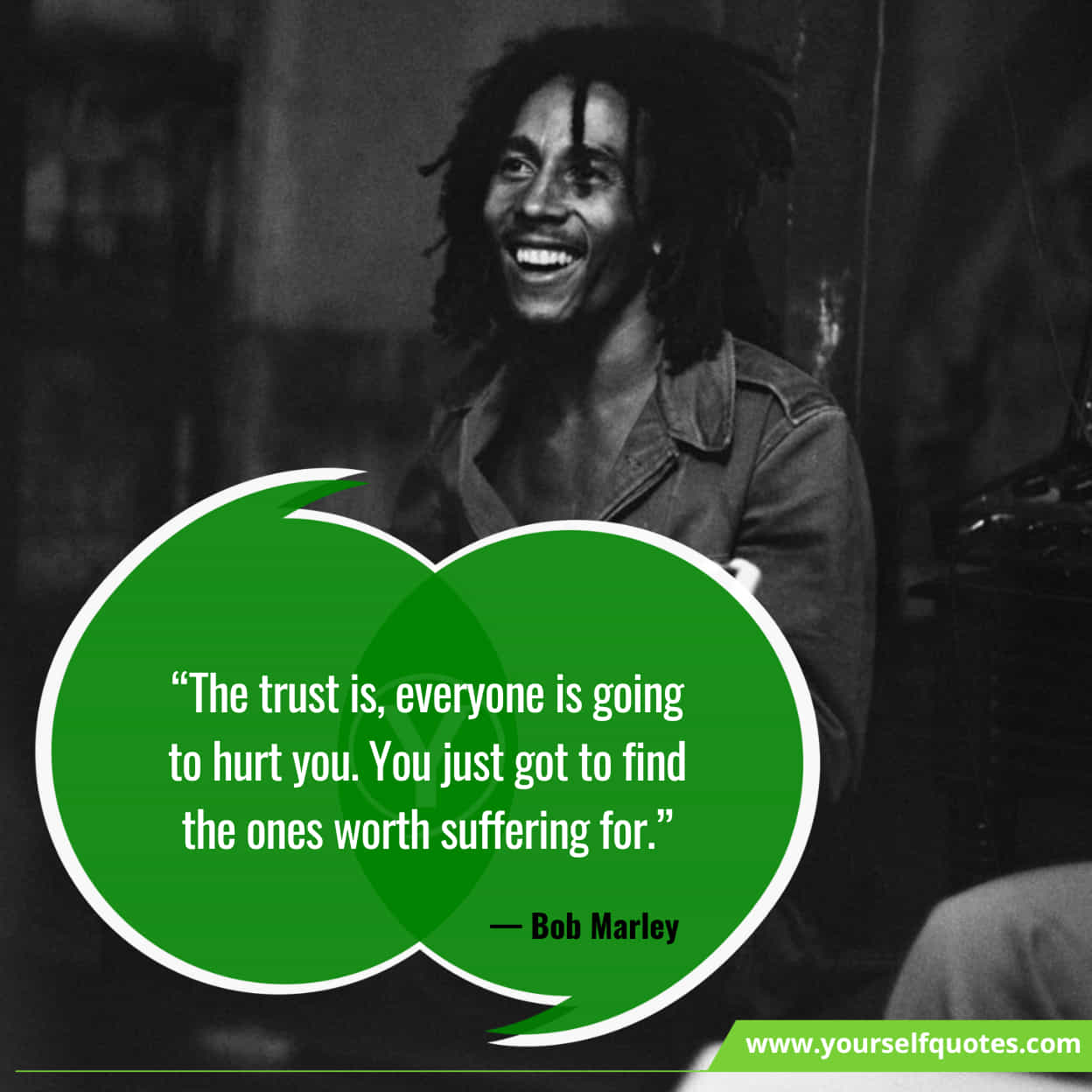 Bob Marley was a famous singer, guitarist, and songwriter from Jamaica. He is considered one of the greatest musical stars to have emerged in the modern era. The singer became a global music icon at the time of the great social rise in the swinging ’60s and the civil rights movement that swept across the United States. Bob was indeed an awesome orator and messenger of peace and non-violence through his music. Marley died at a very young age of 36 years only on 11th May 1981, as he was suffering from acral vertiginous melanoma.

His fans all around the world went into deep grief and he received a state funeral in Jamaica. His last album was released in 1984 with the name of ‘Legend’ and it became the best-selling reggae album of all time. He was posthumously honoured by Jamaica soon after his death, as he was designated the nation’s Order of Merit award.

Bob Marley is still remembered by people worldwide. His songs and words are popular like anything. So why not share these amazing Bob Marley Quotes with your beloved ones. Share and spread the quotes yourself.

Which are your favorite Bob Marley Quotes? Leave a comment below.

Love Yourself Quotes That Will Provide You Inner Peace