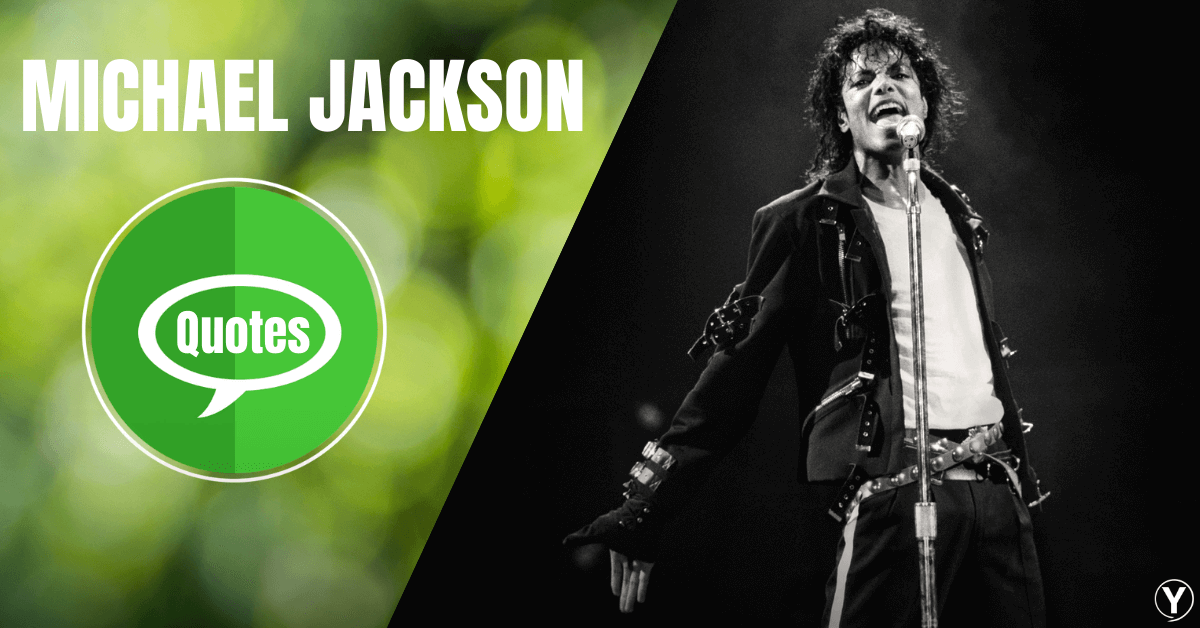 Michael Jackson, full name Michael Joseph Jackson was a stunning American singer, songwriter, and dancer. He is considered one of the most enthusiastic cultural figures of the 20th century. He used to entertain people with his marvelous performance on stage.

Jackson was born on 29th August 1958 in Gary, Indiana, near Chicago, United States.

Michael was born in a working-class African-American family. His father Joseph Walter “Joe” Jackson, was a former boxer, a crane operator at U.S. Steel, and played the guitar with a local rhythm and blues band, the Falcons, to run the family. His mother Katherine Esther Jackson, played clarinet and piano, had aspired to be a country-and-western performer, and also worked part-time at Sears. Michael had three sisters, Rebbie, La Toya & Janet, and five brothers Jackie, Tito, Jermaine, Marlon, and Randy.

In 1964, Michael Jackson made his first professional debut with his elder brothers Jackie, Tito, Jermaine, and Marlon. Then he began his solo career in 1971 and in the early 1980s, he became a prominent star in popular music. Some of his famous music videos include “Beat It”, “Billie Jean”, and “Thriller”. His on-stage performance was worth watching. He popularized with his brilliant dancing techniques such as the robot and the moonwalk. His style influenced artists of various genres. His top-most-selling album was Thriller. It estimated sales of over 350 million records worldwide.

Michael Jackson holds hundreds of awards and accolades, more than any other artist in the history of popular music. He was ranked Most Successful Entertainer of All Time as per Guinness world records. In his bag of achievements, he holds 15 Grammy Awards, 26 American Music Awards, and 13 number-one US singles. He was the one and only artist who topped the list of 10 singles in the Billboard Hot 100 in five different decades. In 2016, as per Forbes, his estate earned $825 million. Michael died on 25th June 2009 because of a cardiac arrest.

“Hope is such a beautiful word, but it often seems very fragile. Life is still being needlessly hurt and destroyed.” — Michael Jackson 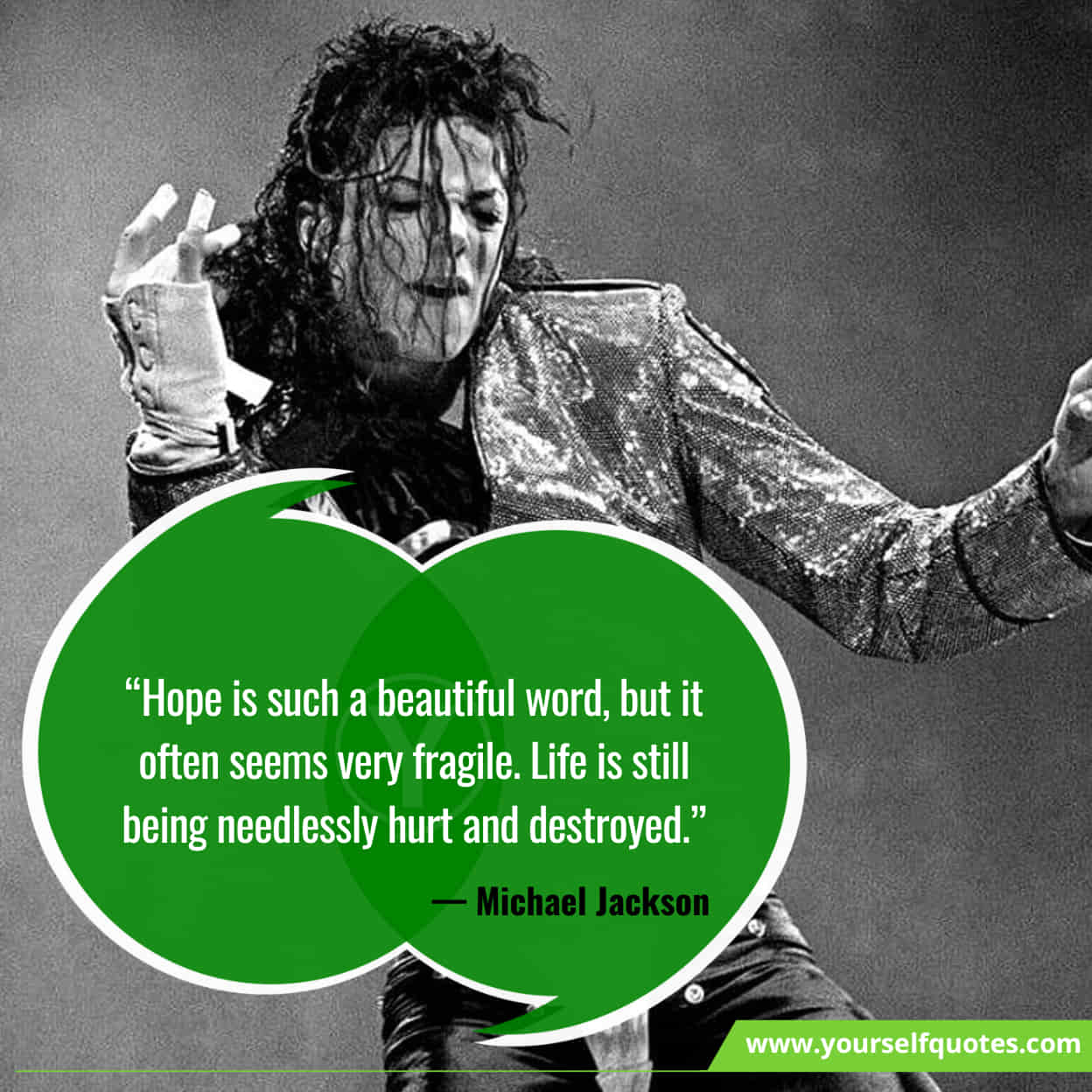 “In their innocence, very young children know themselves to be light and love. If we will allow them, they can teach us to see ourselves the same way.” — Michael Jackson

“When children listen to music, they don’t just listen. They melt into the melody and flow with the rhythm. Something inside starts to unfold its wings – soon the child and the music are one.” — Michael Jackson

“Please go for your dreams. Whatever your ideals, you can become whatever you want to become.” — Michael Jackson 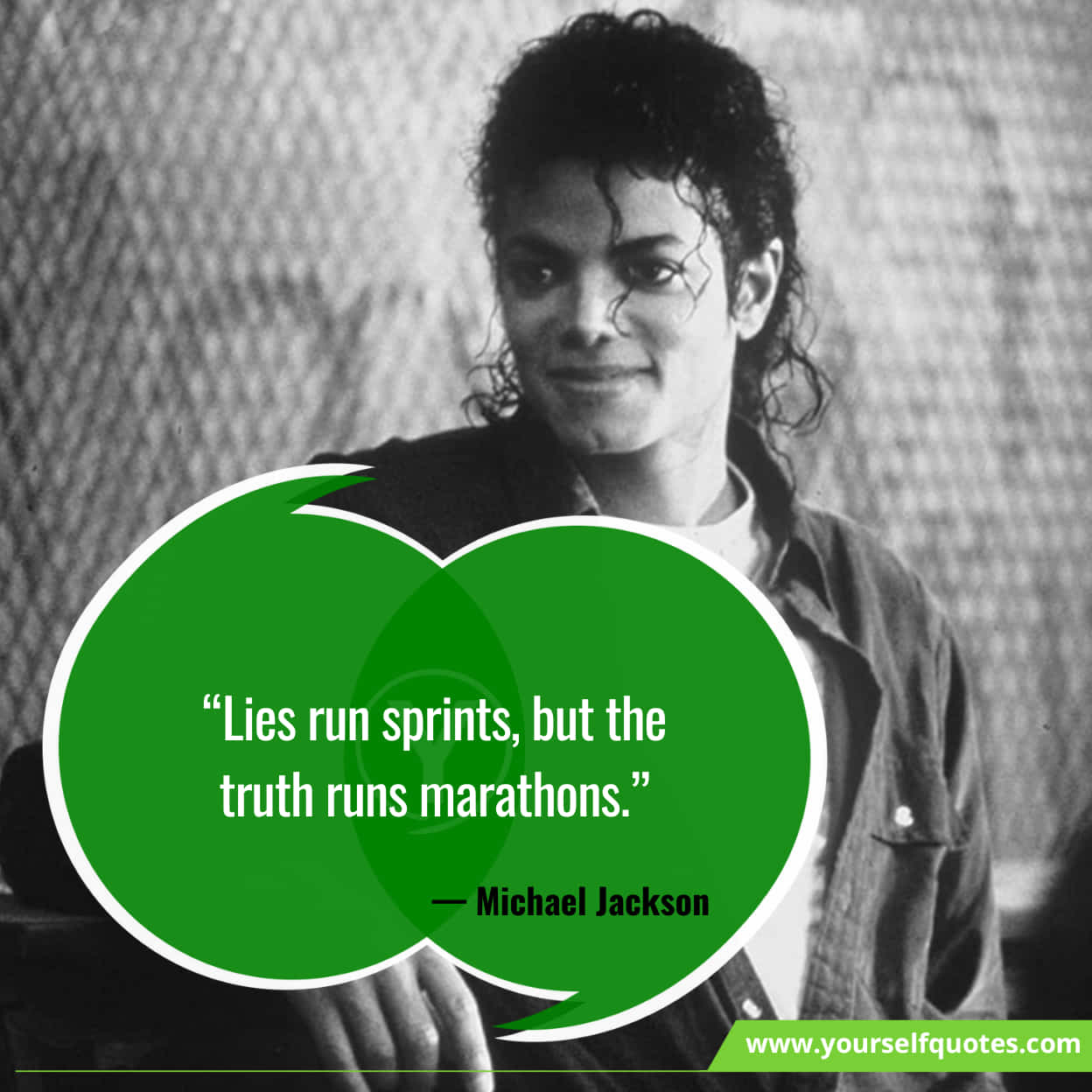 “I’m really very self-confident when it comes to my work. When I take on a project, I believe in it 100%. I really put my soul into it. I’d die for it. That’s how I am.” — Michael Jackson

“When they say the sky’s the limit to me, that’s really true.” — Michael Jackson

“We have to heal our wounded world. The chaos, despair, and senseless destruction we see today are a result of the alienation that people feel from each other and their environment.” — Michael Jackson

“To live is to be musical, starting with the blood dancing in your veins. Everything living has a rhythm. Do you feel your music.” — Michael Jackson

“People ask me how I make music. I tell them I just step into it. It’s like stepping into a river and joining the flow. Every moment in the river has its song.” — Michael Jackson 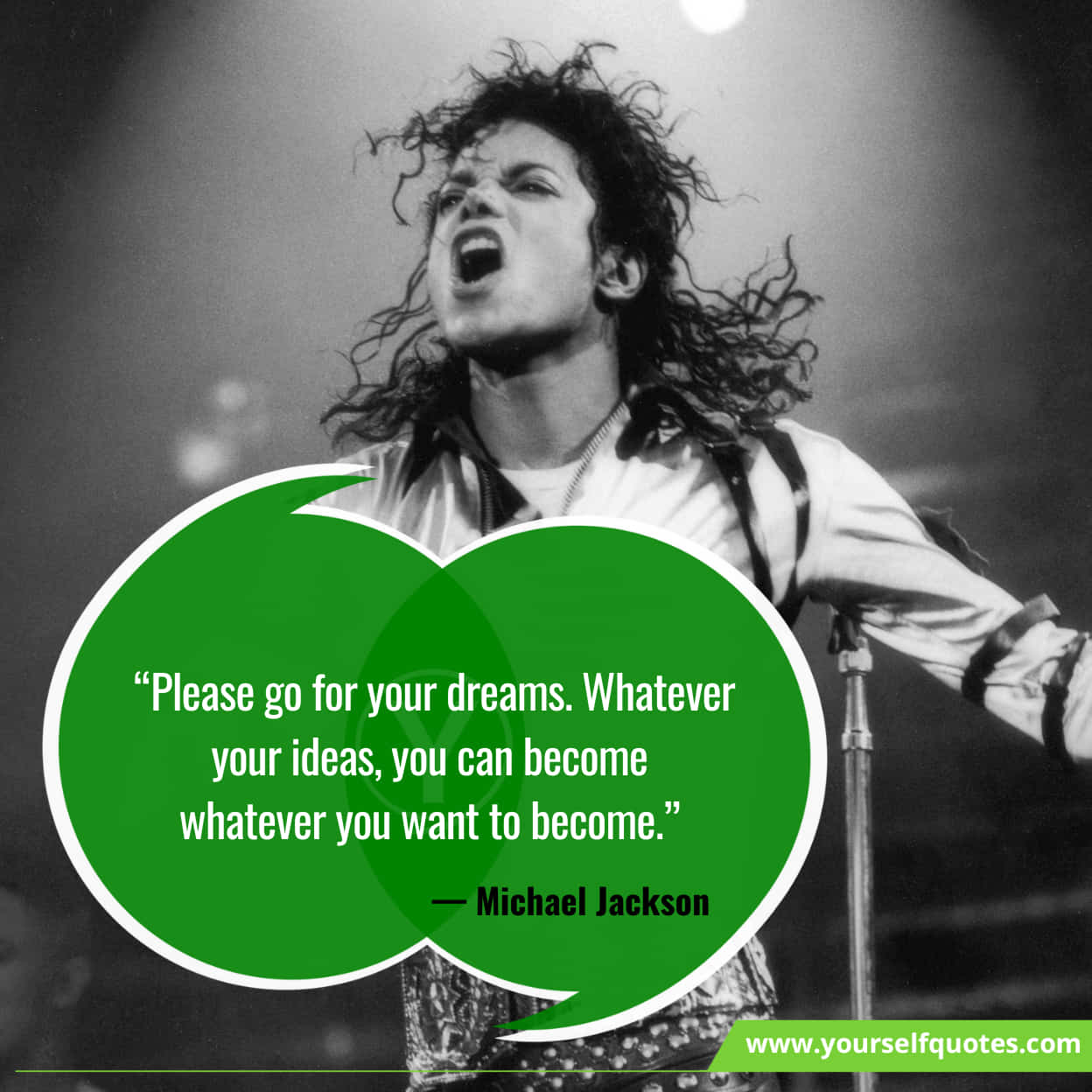 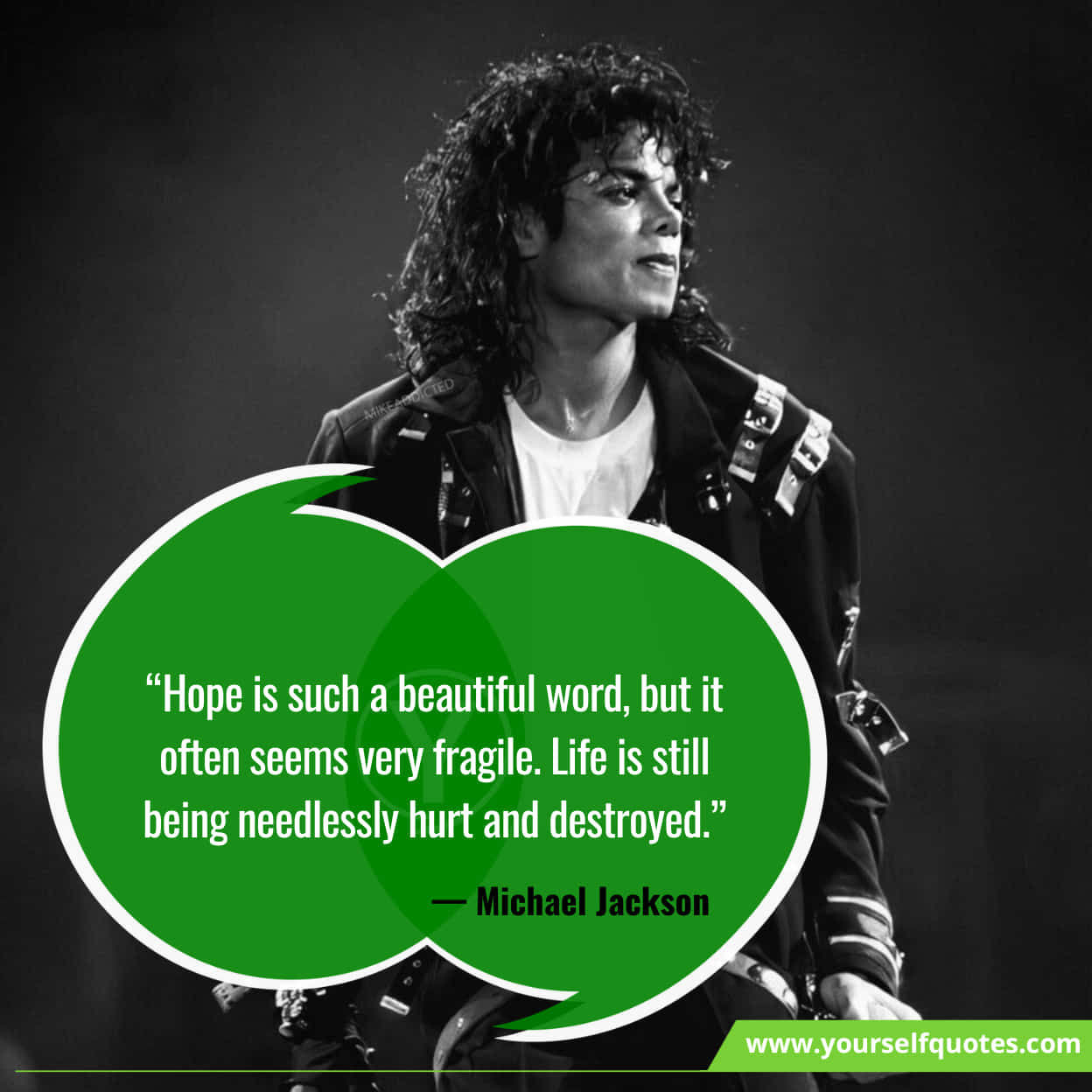 “Be humble, believe in yourself and have the love of the world in your heart.” — Michael Jackson 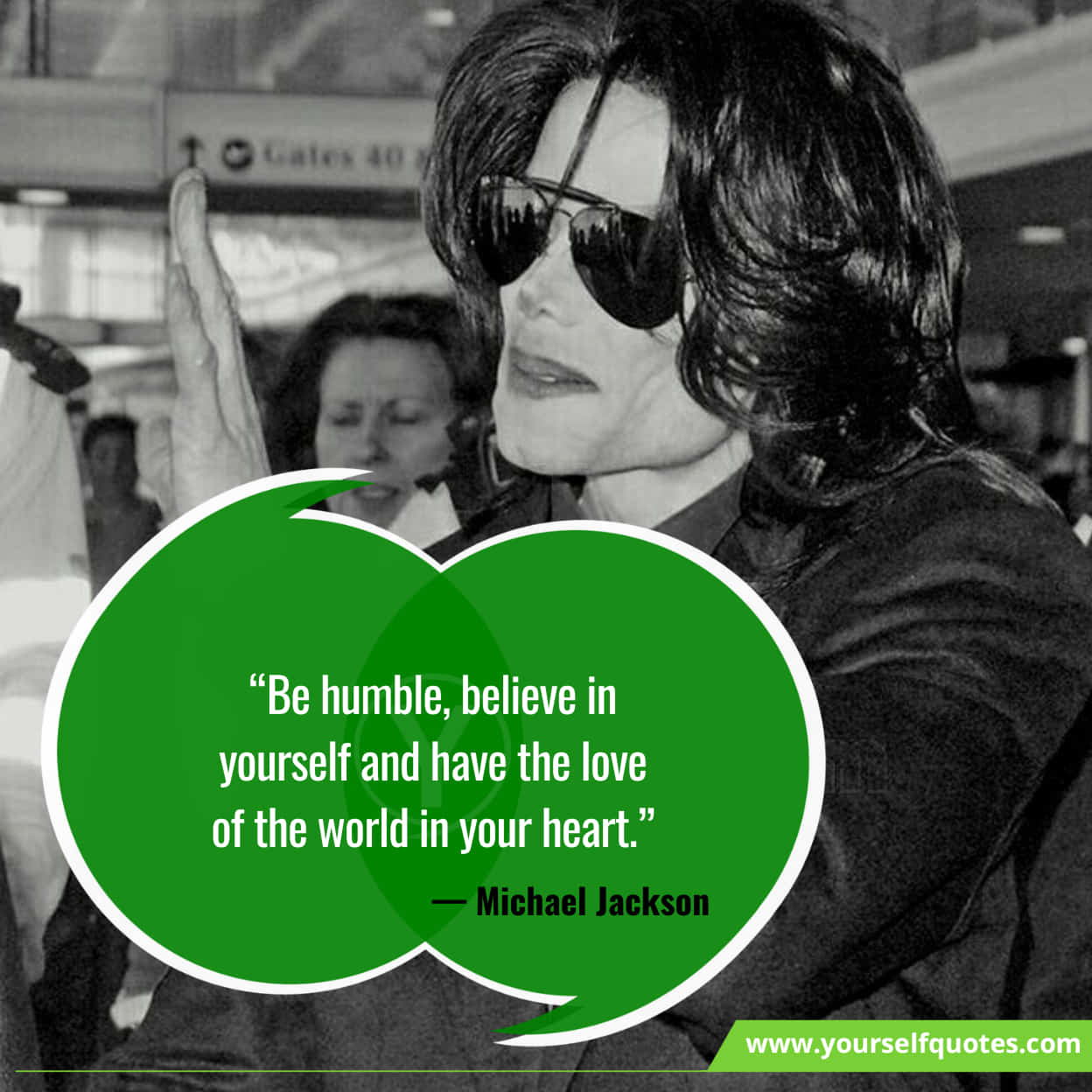 “Remember,the press is a business: Newspapers and magazines are in business to make money – sometimes at the expense of accuracy, fairness and even the truth.” — Michael Jackson

“Always believe in yourself. No matter who’s around you being negative or thrusting negative energy at you, totally block it off. Because whatever you believe, you become.” — Michael Jackson

“Being on stage is magic. There’s nothing like it. You feel the energy of everybody who’s out there. You feel it all over your body. When the lights hit you, it’s all over, I swear it is.” — Michael Jackson

“To me, true bravery is settling differences without a fight and having the wisdom to make that solution possible.” — Michael Jackson 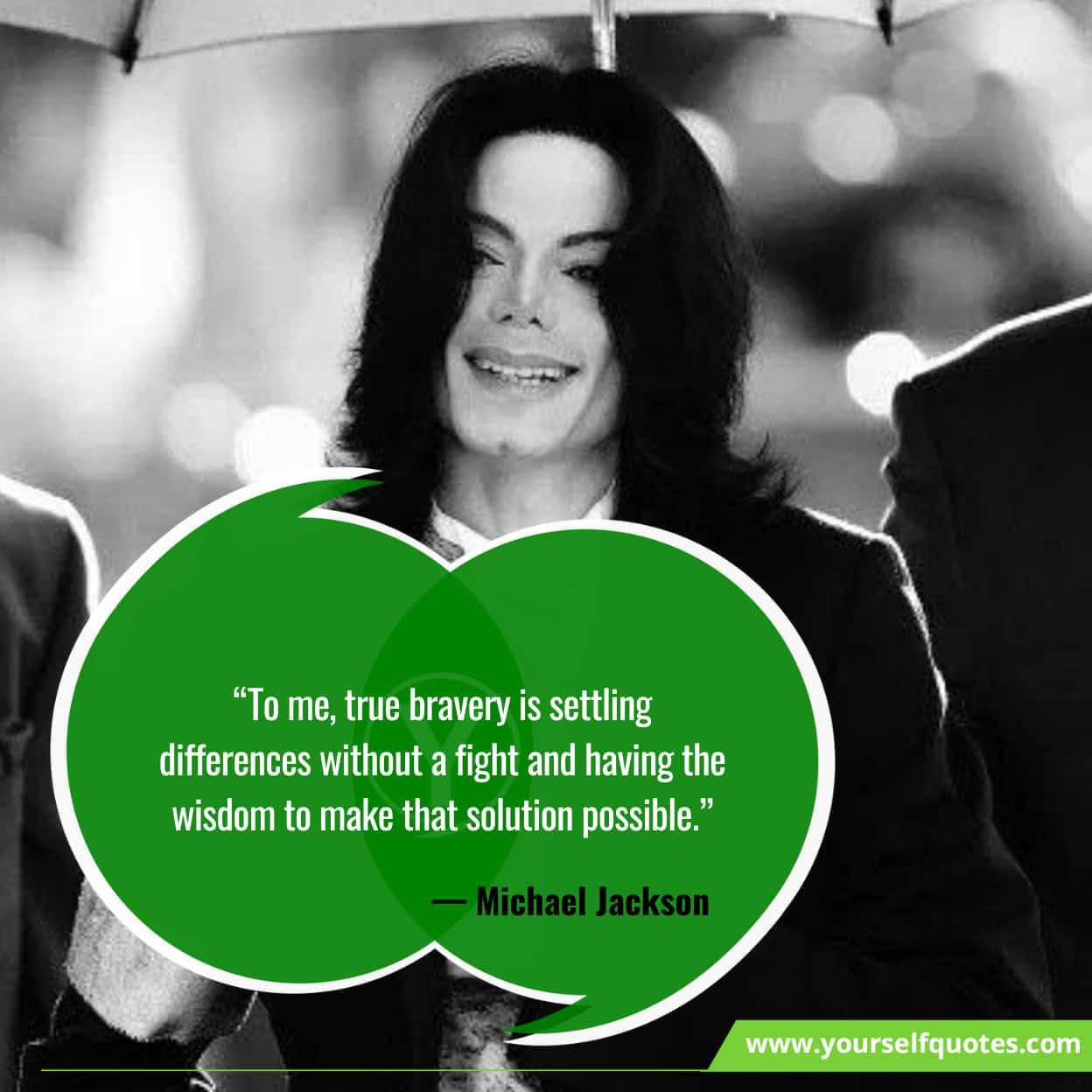 “I don’t care if the whole world is against you or seeing you or saying you’re not gonna make it. Believe in yourself, no matter what.” — Michael Jacksonn

“You give me fever from miles around ill pick you up in my car and well paint the toown.” — Michael Jackson

“Often people just don’t see what I see. They have too much doubt. You can’t do your best when you’re doubting yourself. If you don’t believe in yourself, who will.” — Michael Jackson

“Music is the greatest communication in the world. Even if people don’t understand the language that you are singing in, they still know good music when they hear it.” — Michael Jackson

“A star can never die. It just turns into a smile and melts back into the cosmic music, the dance of life.” — Michael Jackson 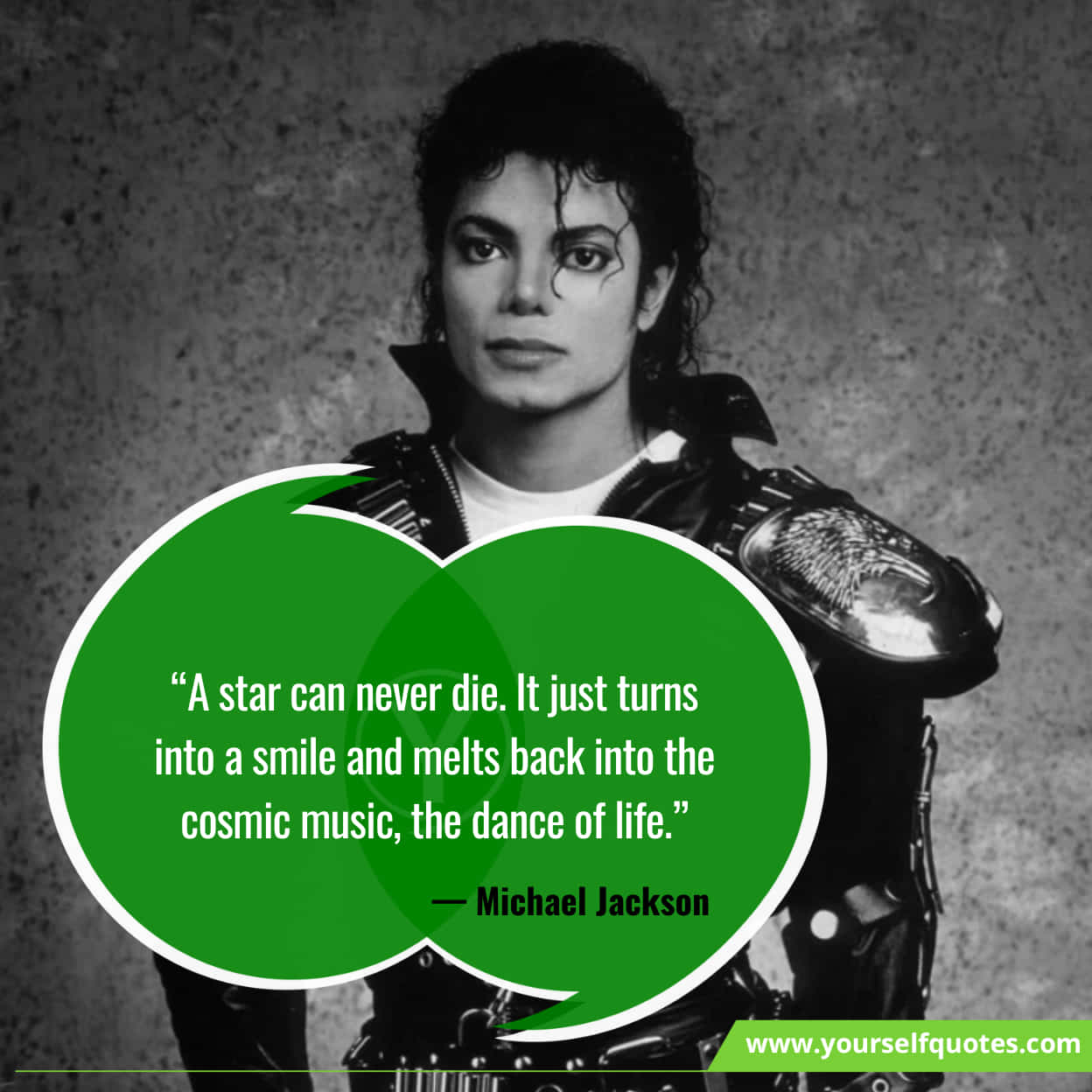 “To give someone a piece of your heart, is worth more than all the wealth in the world.” — Michael Jackson

“Children show me in their playful smiles the divine in everyone.” — Michael Jackson

“But for me the sweetest contact with God has no form. I close my eyes, look within, and enter a deep soft silence. The infinity of God’s creation embraces me.” — Michael Jackson

“I’m just like anyone. I cut and I bleed and I embarrass easily.” — Michael Jackson

“I’m going to search for my star until I find it. It’s hidden in the drawer of innocence, wrapped in a scarf of wonder.” — Michael Jackson

“If you want to make the world a better place, take a look at yourself, and make a change.” — Michael Jackson 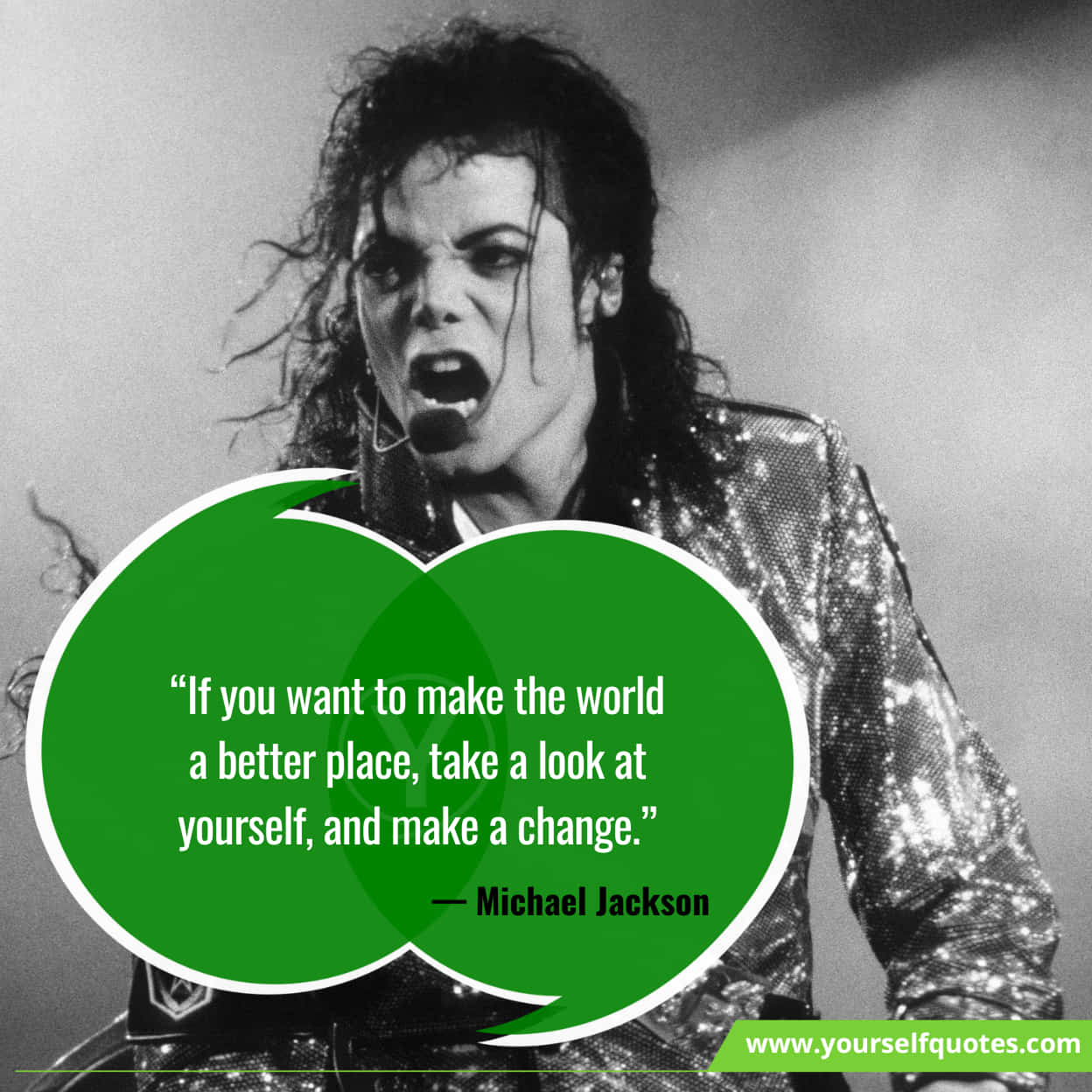 “Before you judge me , try hard to love me , look within your heart Then ask , – have you seen my childhood ?”

“They say that parenting is like dancing. You take one step, your child takes another.” — Michael Jackson

“Each song is a child I nourish and give my love to. But even if you have never written a song, your life is a song. How can it not be?” — Michael Jackson

“But I will never stop helping and loving people the way Jesus said to.” — Michael Jackson

“When all life is seen as divine, everyone grows wings.” — Michael Jackson

“You can’t hurt me, I found peace within myself.” — Michael Jackson

“The courage to be honest and intimate opens the way to self-discovery. It offers what we all want, the promise of love.” — Michael Jackson 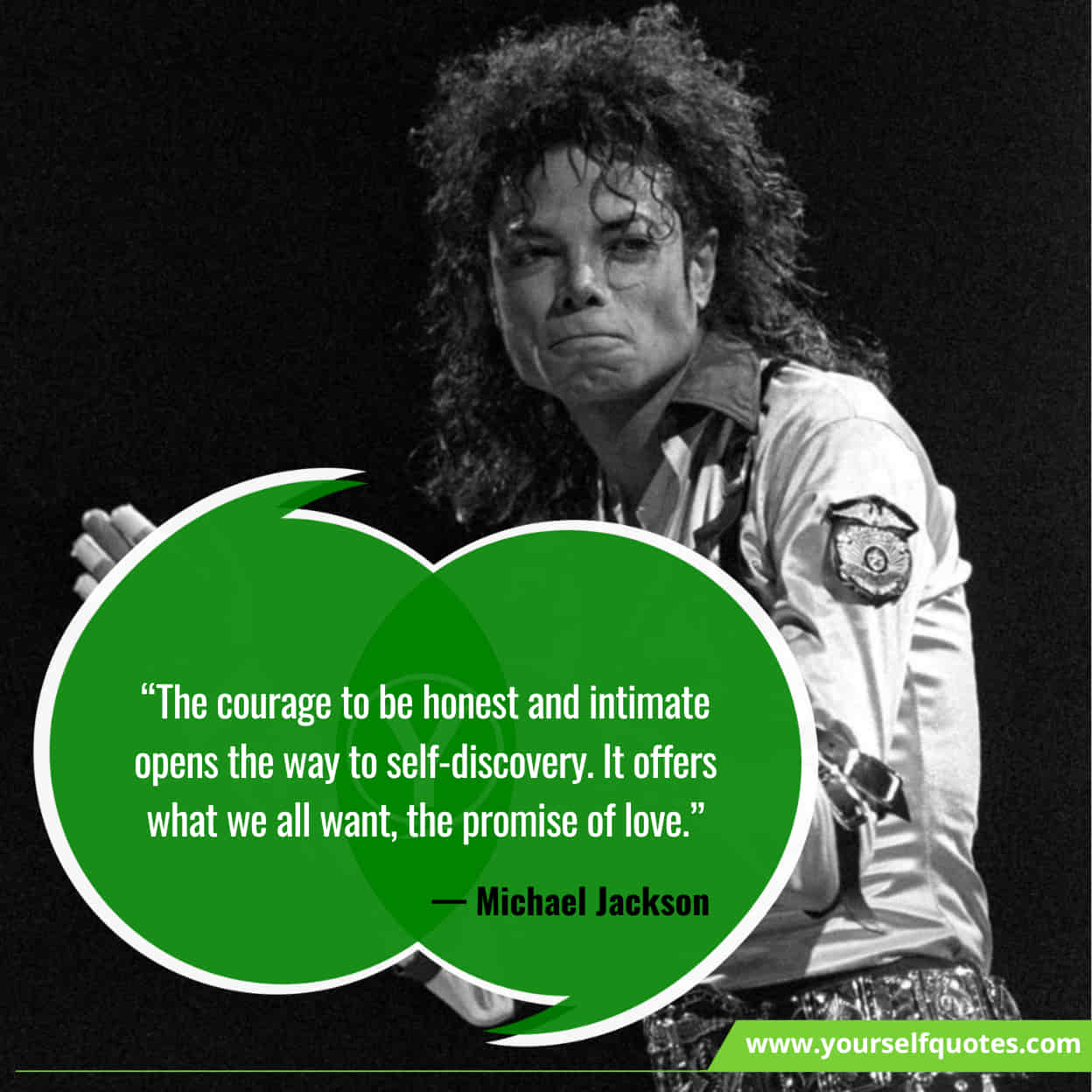 “Be with me and let us feel the power of life together as one creature here on earth.” — Michael Jackson 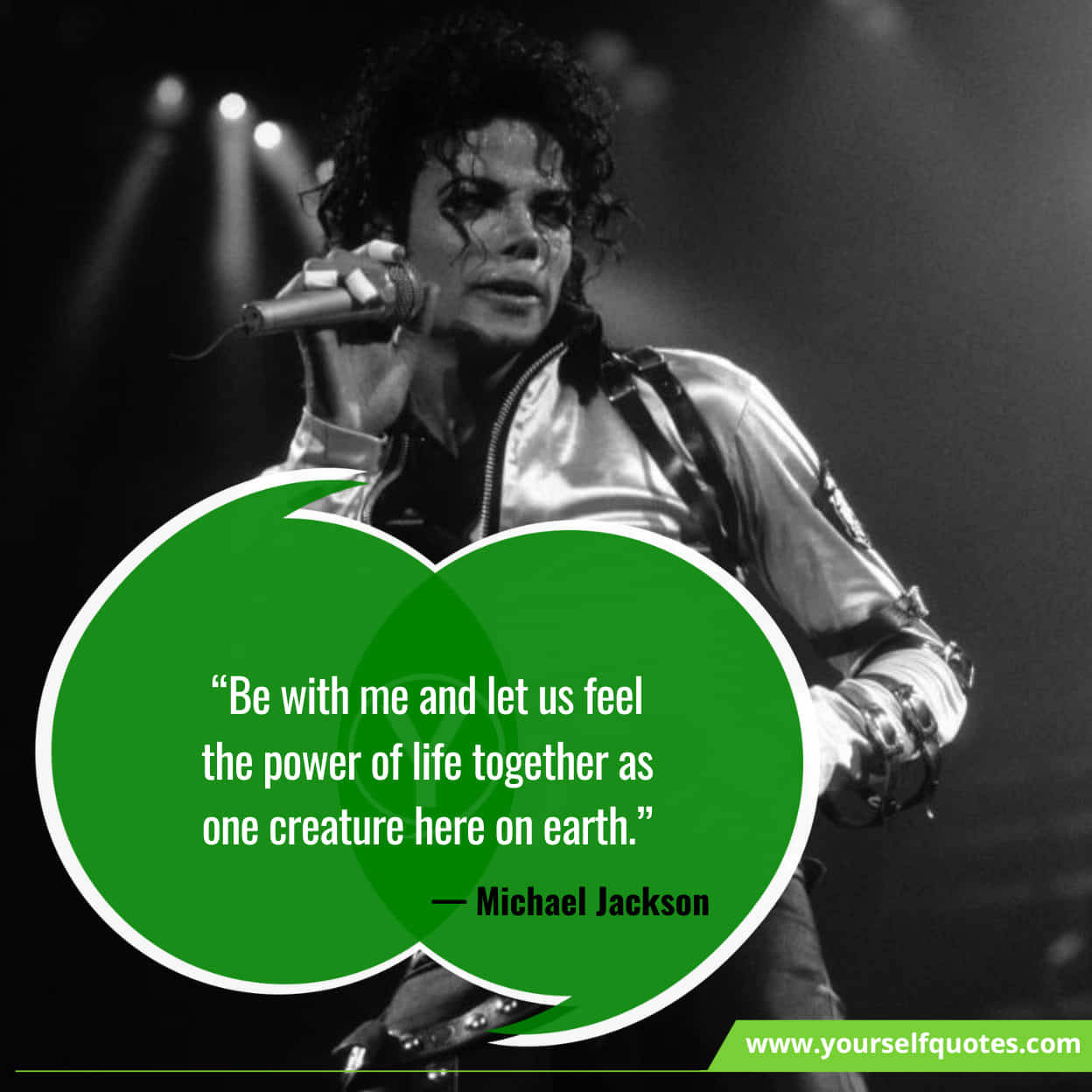 Michael Jackson started singing at a very young age, and with time his voice and vocal style changed. And this is the reason he is known for his vocal range. His first album released was Thriller and it was named the most successful music video ever by the Guinness World Records.

Jackson possessed a talent for transforming the music video into an art form and a promotional tool through complex storylines, dance routines, special effects, and famous cameos while breaking down racial barriers. He even became a popular image of controversy because of his changing appearance, relationships, behavior, and lifestyle.

The way Michael influenced all by his music and dance talent on stage, he also amused people with his style of performance, way of talking, and walking style. In the same way, you can also influence and share your experience with others around you by sharing these stunning Michael Jackson Quotes and Images.

Which are your favorite Michael Jackson Quotes? Leave a comment below.

Happy All Souls Day Quotes, Messages, and Wishes for Loved Ones