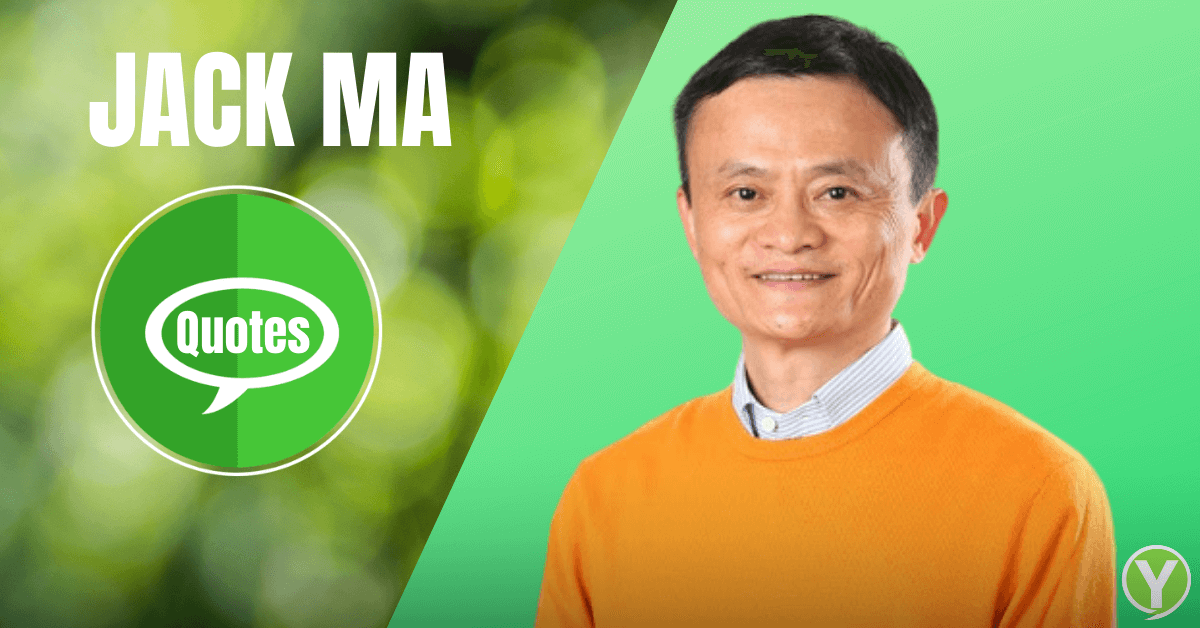 Rejection… Rejection… Rejection… wherever you go, and you listen to this word then maximum people will be a break and will be not able to bounce back in life. but there is a man who defeated it very nicely and created history in world business. This is the man who known for his biggest IPO opening in New York exchange and he is running a highly b2b traffic website Alibaba.com, This Alibaba magical man is JACK MA. A Chinese Entrepreneur, his net worth is about US$42.4 billion.

There was a time in his life when he was not selected for 30 jobs out of 30 applied jobs. KFC has also rejected this single person out of 24 people and rejected 10 times by Harvard Business School.

Do you know that why hasn’t this person got select anywhere? Because his destiny was written for something else. He bounced back and made his way of life and today he is an example of success. Jack Ma Quote that…

“If you don’t give up, You still have a Chance to Win. Giving up is a Great Failure.” 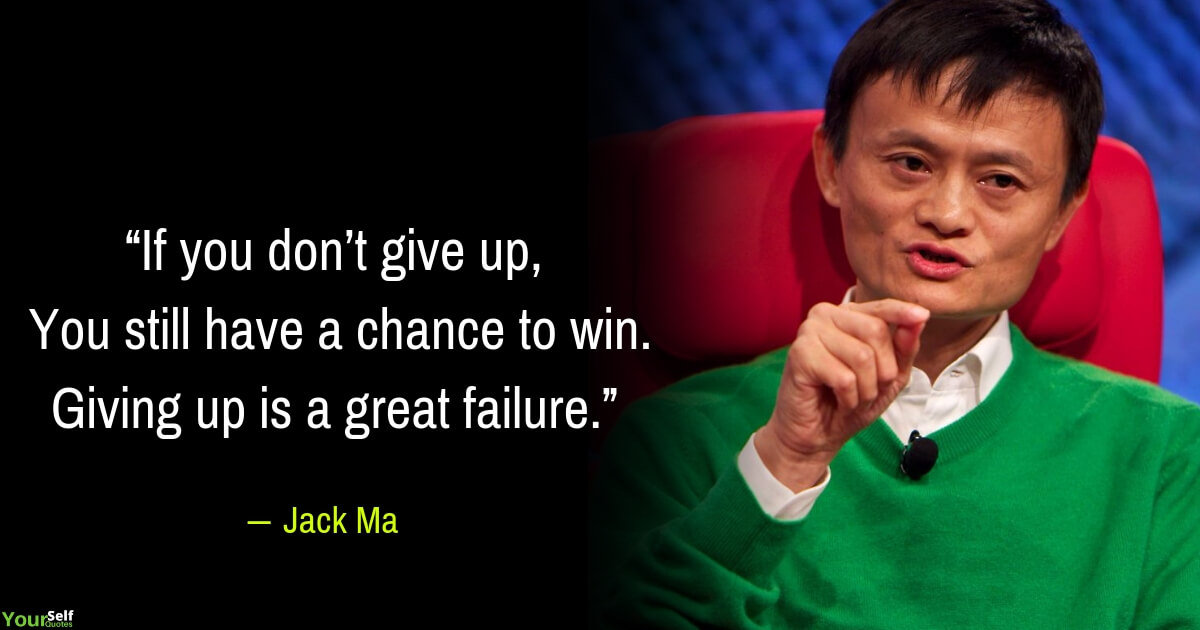 Jack Ma is also known by Ma since childhood as Ma is his family name. He was born in Zhejiang, China on 15th Oct 1964. He is an English graduate from Hangzhou Normal University. He used to go approx. 60 miles from his home to a tourist destination to train himself in English by speaking to a foreigner. Later, he was teaching English at a university in China.

He met a Chinese beauty, Zhang Ying, in his university and later he married her and today they are the parent of two children.

In 1994, he was on a US tour his friend has introduced him internet by searching for a keyword term beer and wondered to see the result of the internet. His interest has built up now and now thought to start his own website company with the help of his wife and he invested $21000. It was China yellow page and made $85000 in the next 3-4 years.

In late 1999, He founded Alibaba and wanted to grow the local market in e-commerce. After a few years, he made this company the most valuable technology company in the world. It was listed on IPO of New York stock exchange and it had raised over $25 billion. Today it’s a group and the market value of Alibaba is $530 billion which deals in e-commerce, AI, retails, technology, internet, and online payment gateway.

Jack Ma had also made his first short film Gong Shou Dao. It’s a 20 min long film, he has acted, and the film is in Mandarin, Chinese. It was watched by 200 million worldwide on the internet in 2017.

Ma’s parents were musicians and that is how they met each other. When Jack was young, he used to travel 70 miles on his bicycle to give tourists tours of the city. In this way, he was able to learn foreign languages and especially the English language. He got his name “Jack” from a foreigner too, who became his best friend. That foreigner found his Chinese name to be very difficult and that’s why he named him Jack.

Jack Ma is not only a Chinese businessman but also an owner of a great personality. He is also an investor and a motivational speaker. His motivation has improved the lives of numerous people and the number is increasing. He has his lovers in every part of the world. Jack also started learning kung fu, dancing, and singing. He is also featured in many magazines like Forbes, Fortune, and many others. Jack Ma is the ideal personality of many people.

In 1999, He had enough money to start the Alibaba group. Alibaba group became very popular after 2004. eBay wanted to buy Alibaba group’s Taobao marketplace. Jack refused this offer. He became extremely popular that many universities invited him to do motivational speeches. Some of these universities include the University of Pennsylvania, Massachusetts Institute of Technology, Harvard University, and Peking University.

“Life is so short, so beautiful. Don’t be so serious about work. enjoy life.” ― Jack Ma 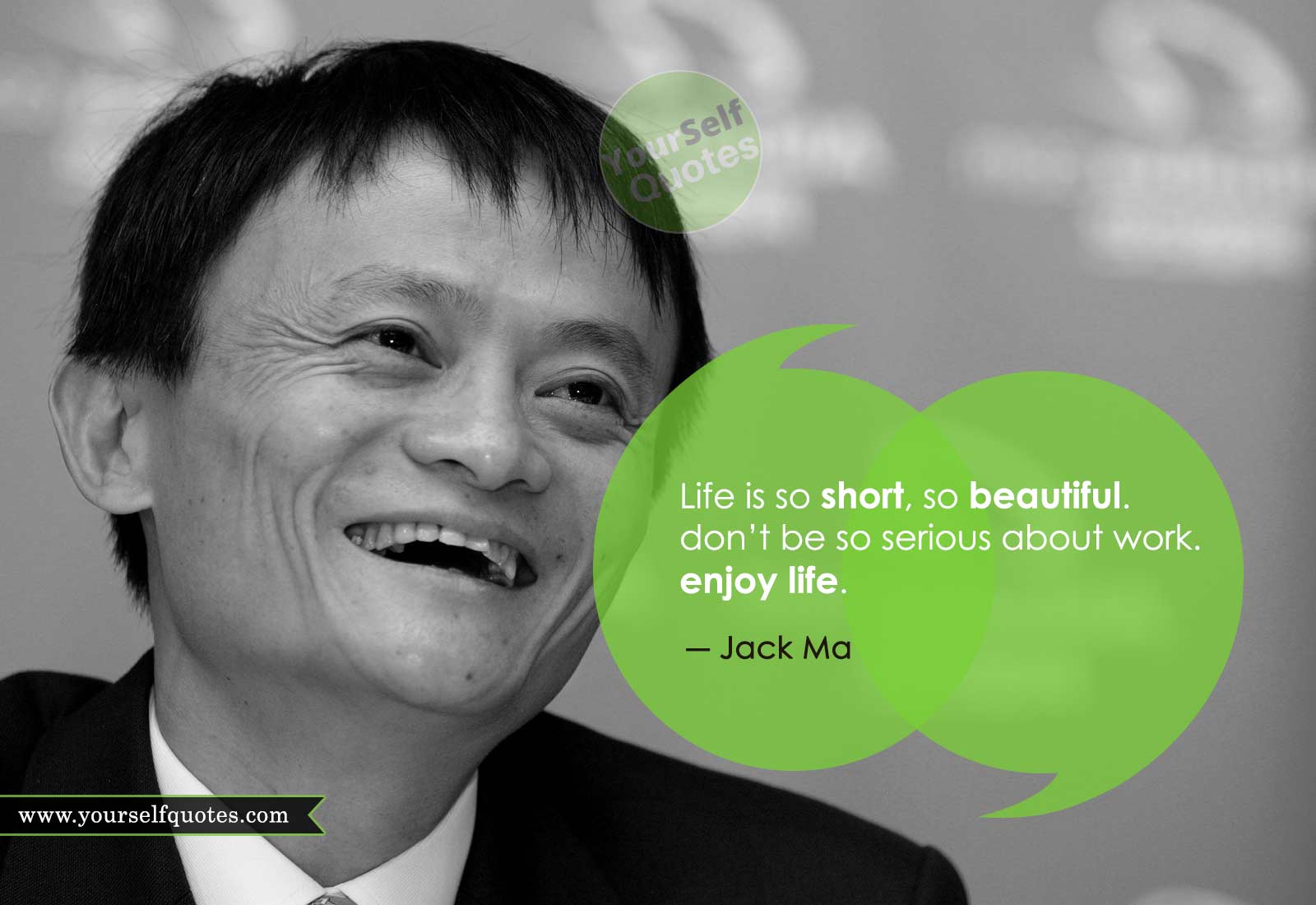 “if you have never tried, how will you ever know if there’s any chance?” ― Jack Ma 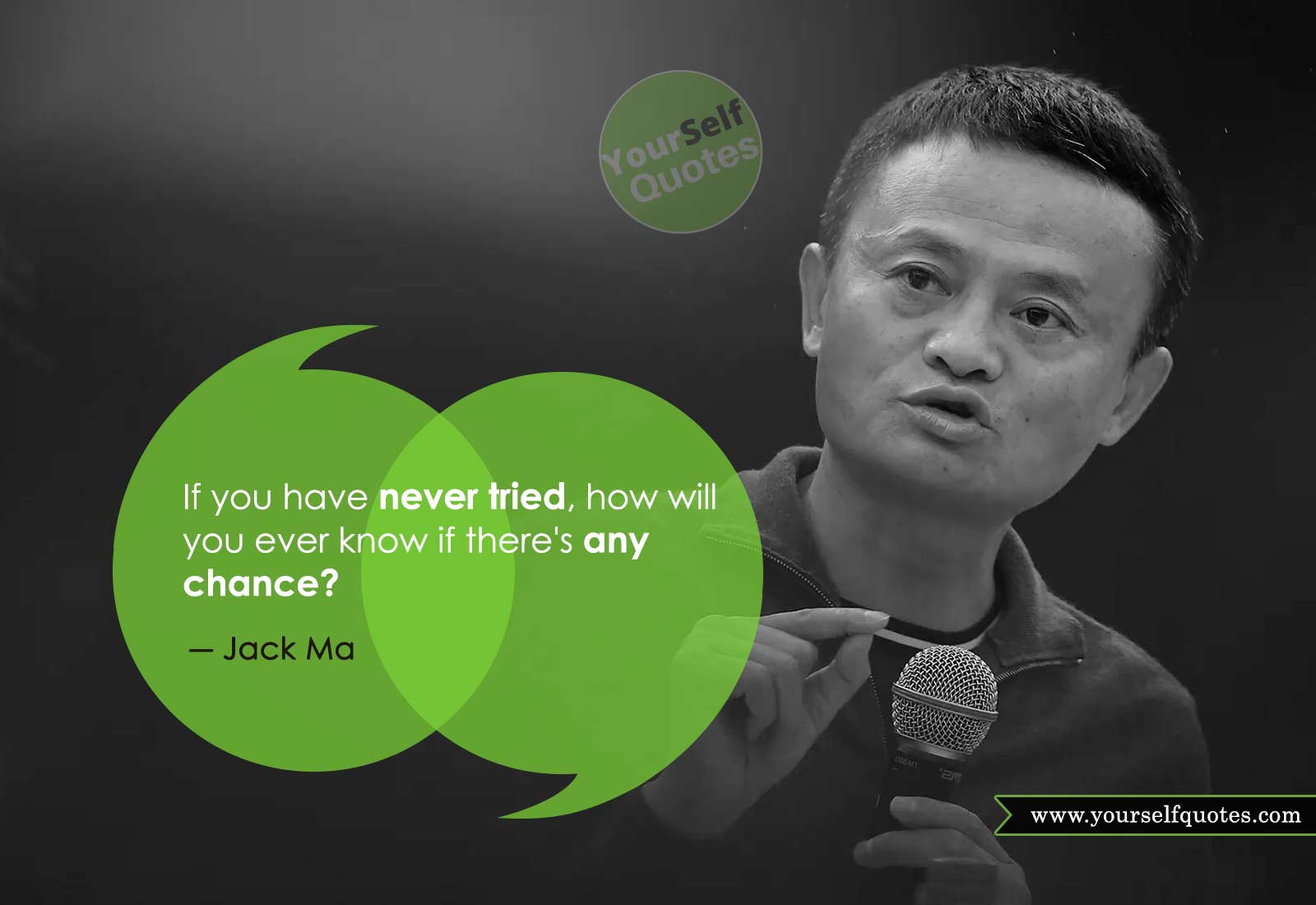 “We appreciate yesterday, but we’re looking for a better tomorrow.” ― Jack Ma 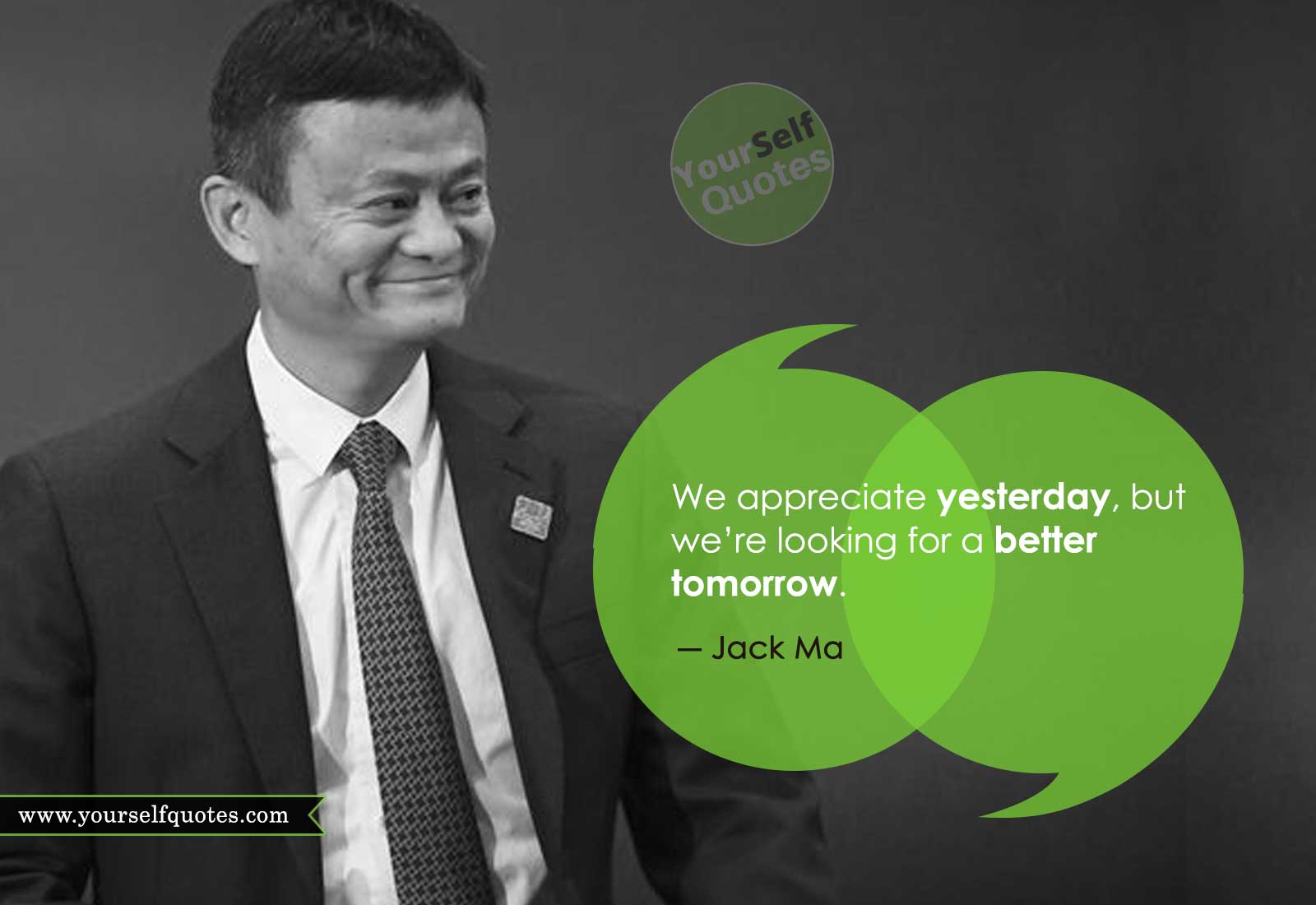 “A leader should never compare his technical skills with his employees.” ― Jack Ma 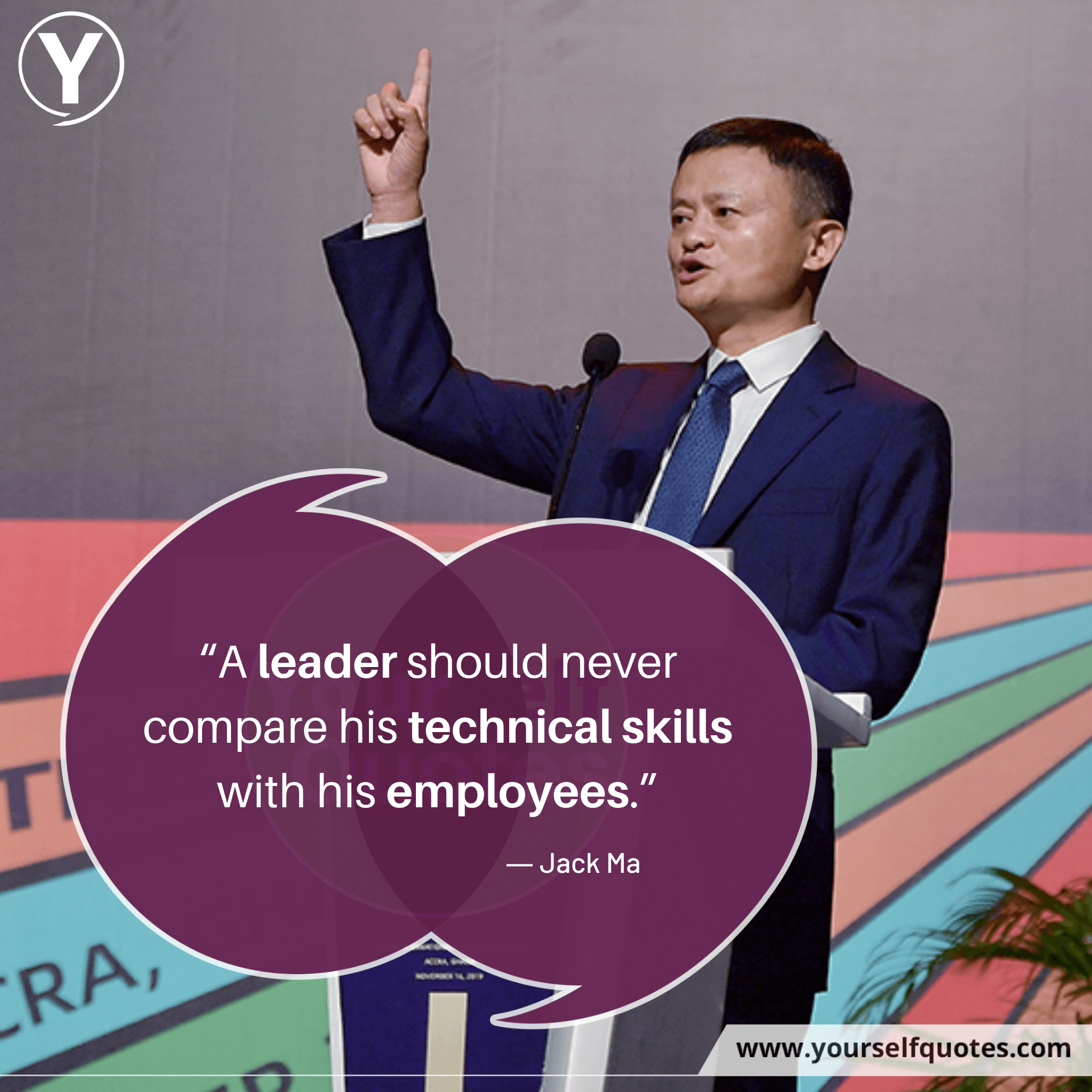 “Success and profitability are outcomes of focusing on customers and employees, not objectives.” ― Jack Ma 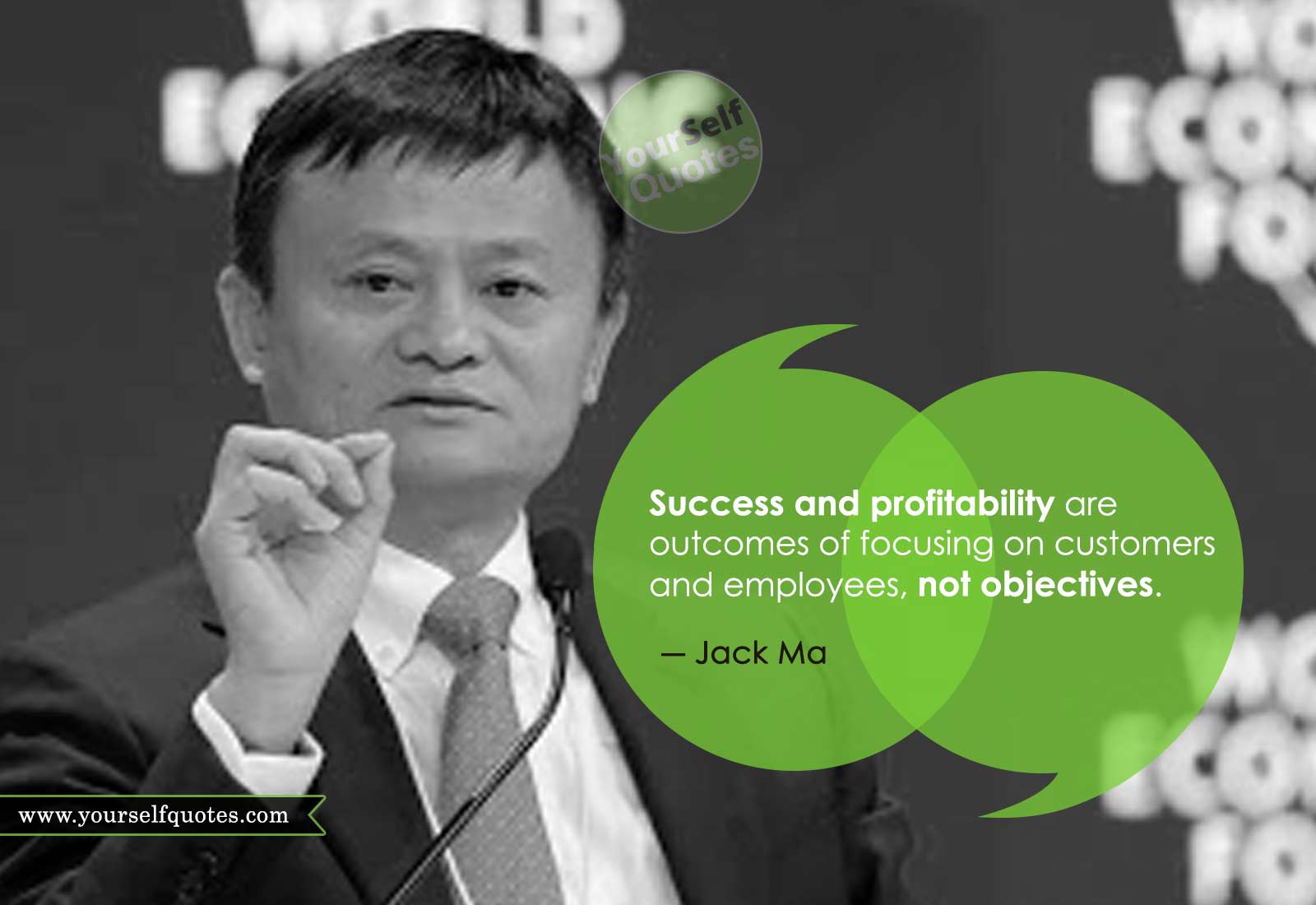 “If the customer loves you, the government will have to love you.” ― Jack Ma 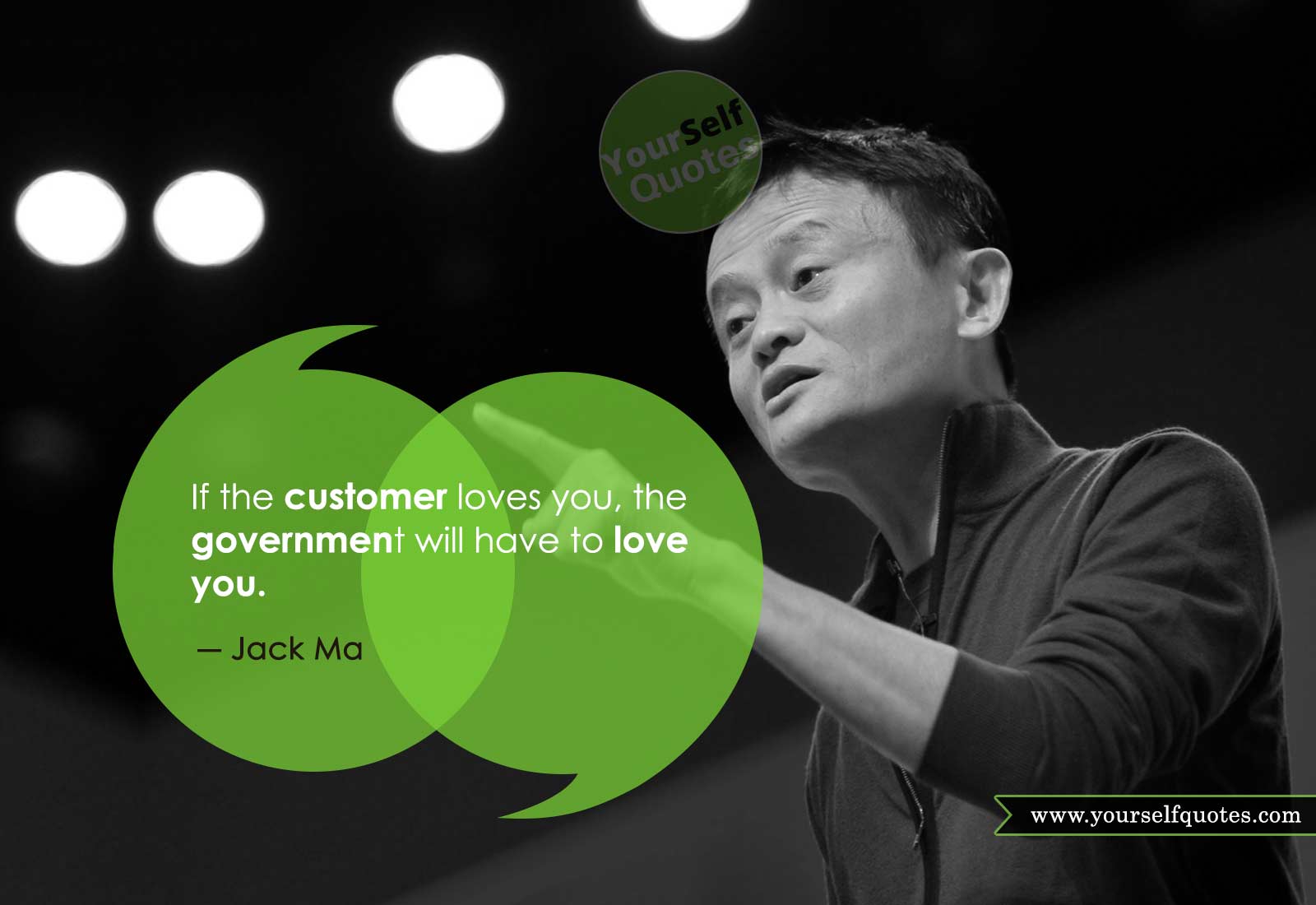 “Without the internet, there would have been no Jack Ma, and no Alibaba or Taobao.” ― Jack Ma 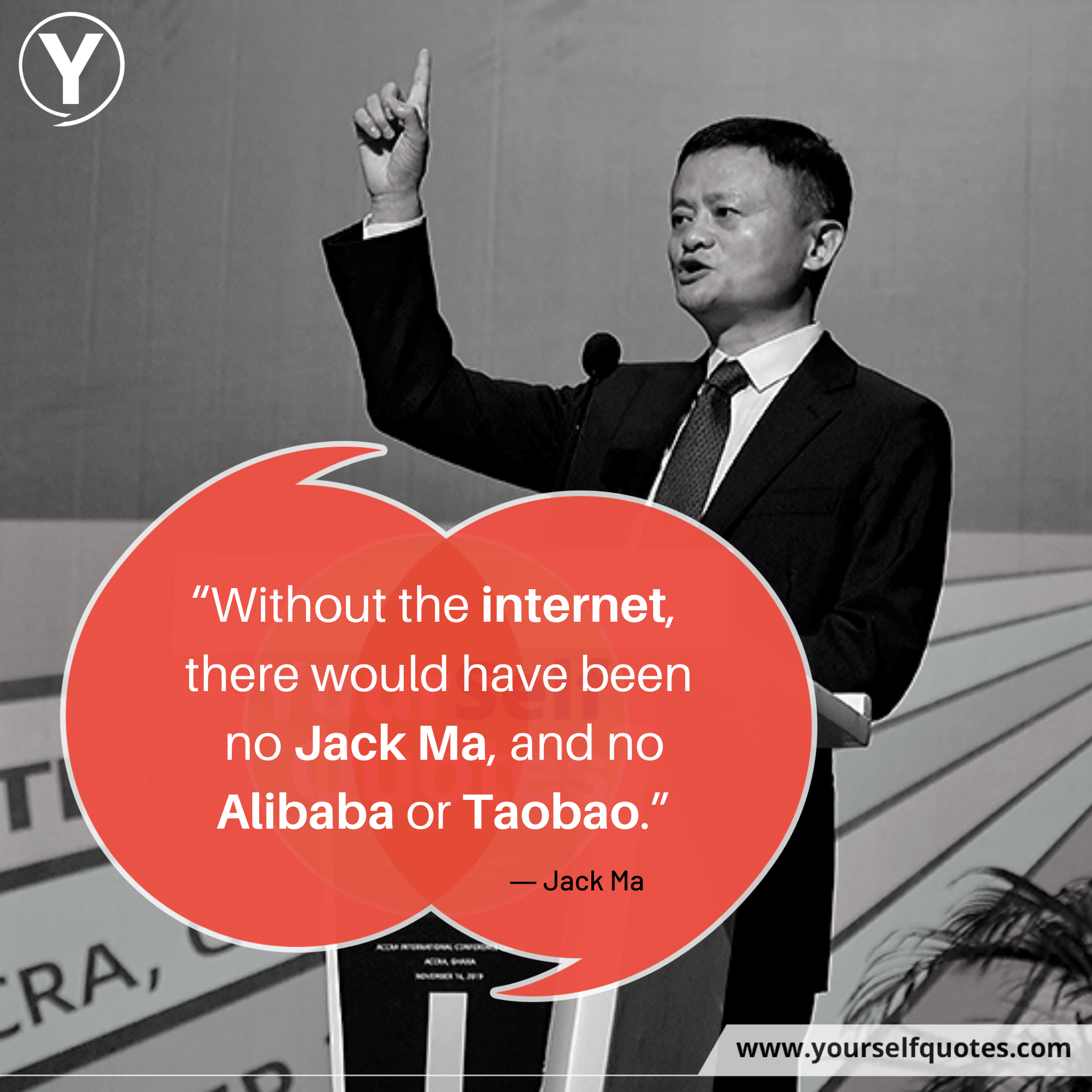 “You have got to keep trying, and if it doesn’t work, you always can revert back to what you were doing before.” ― Jack Ma 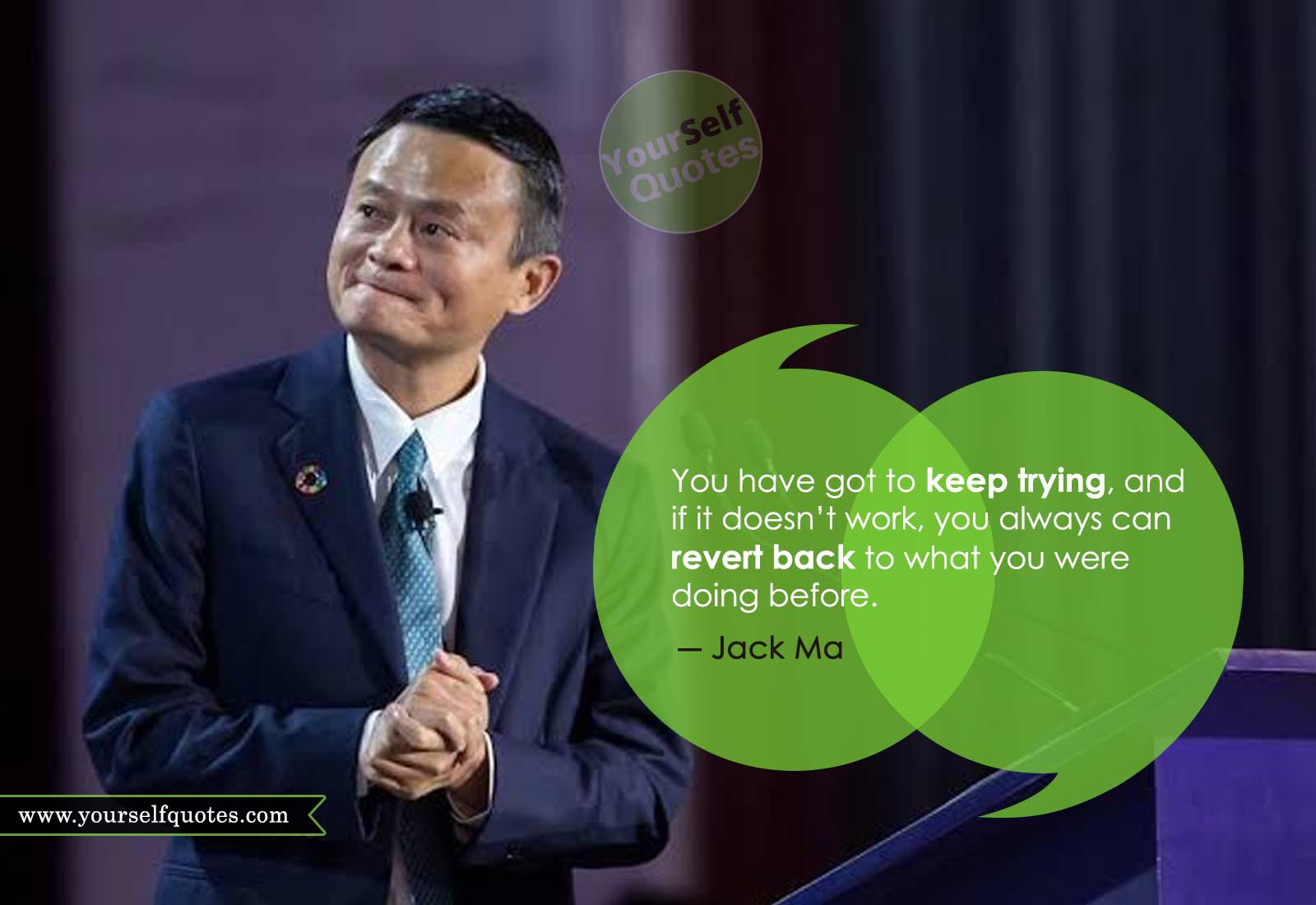 “You never know how much you can do in your life.” ― Jack Ma 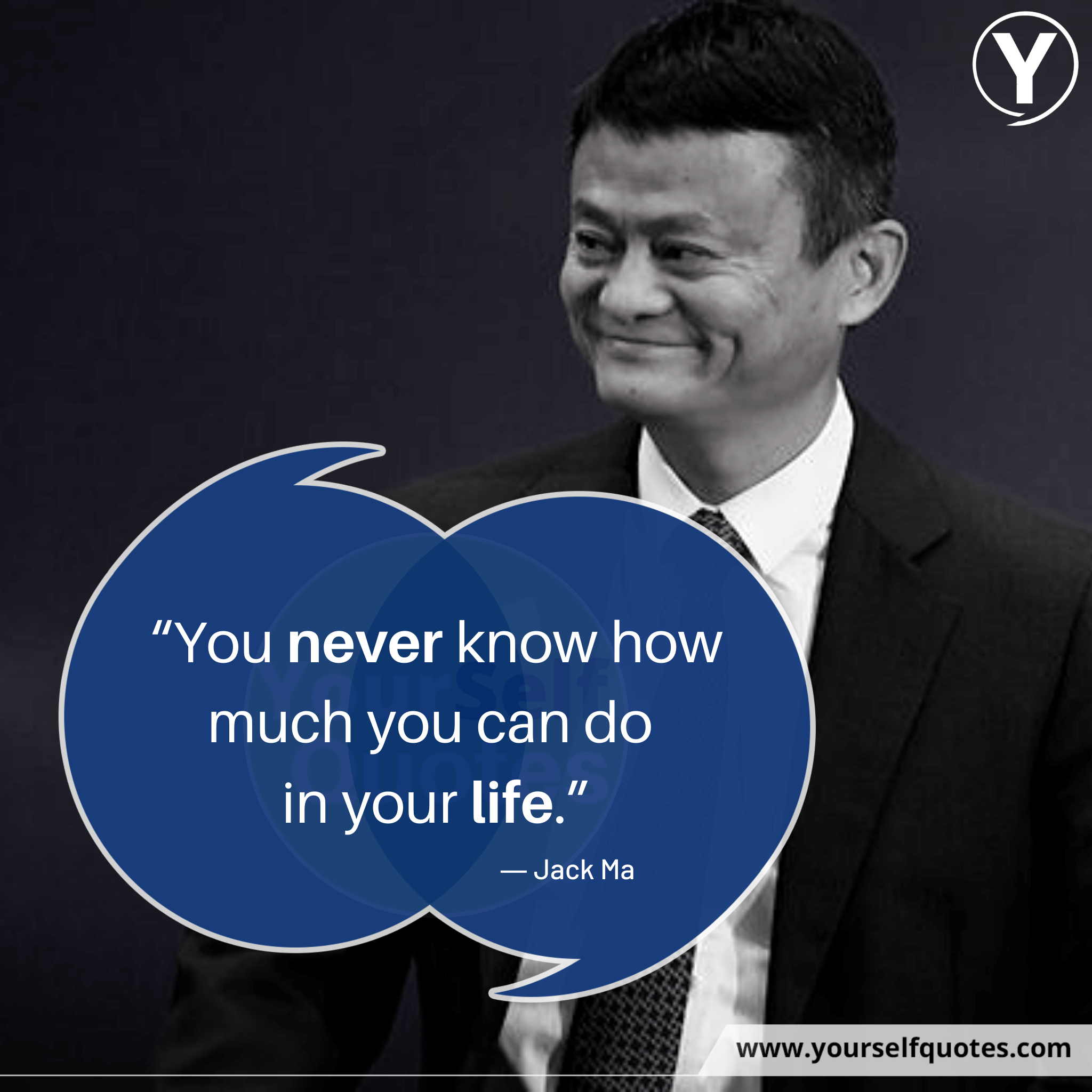 “It doesn’t matter if I failed. at least I passed the concept on to others. even if I don’t succeed, someone will succeed.” ― Jack Ma 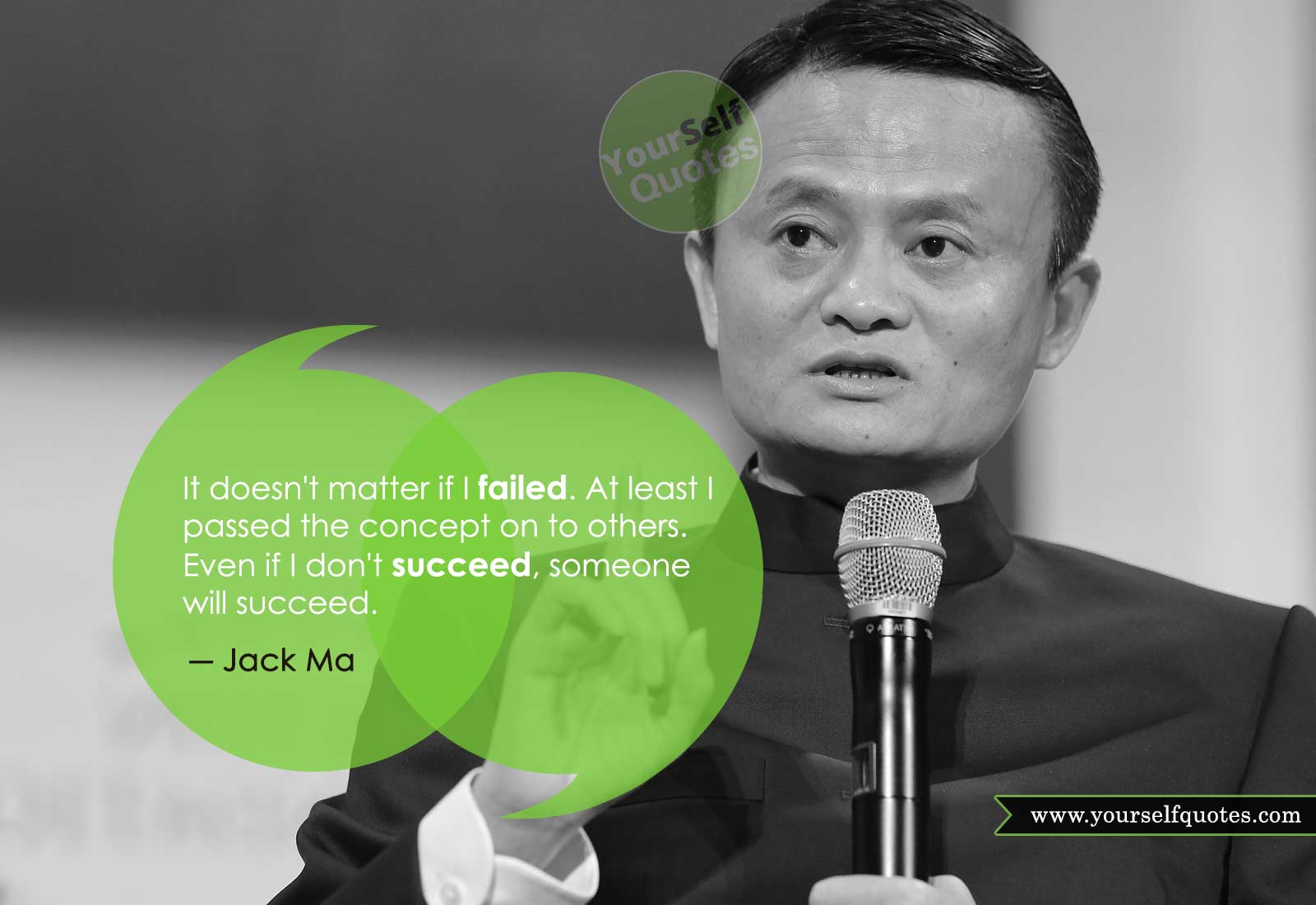 “You need the right people with you, not the best people.” ― Jack Ma 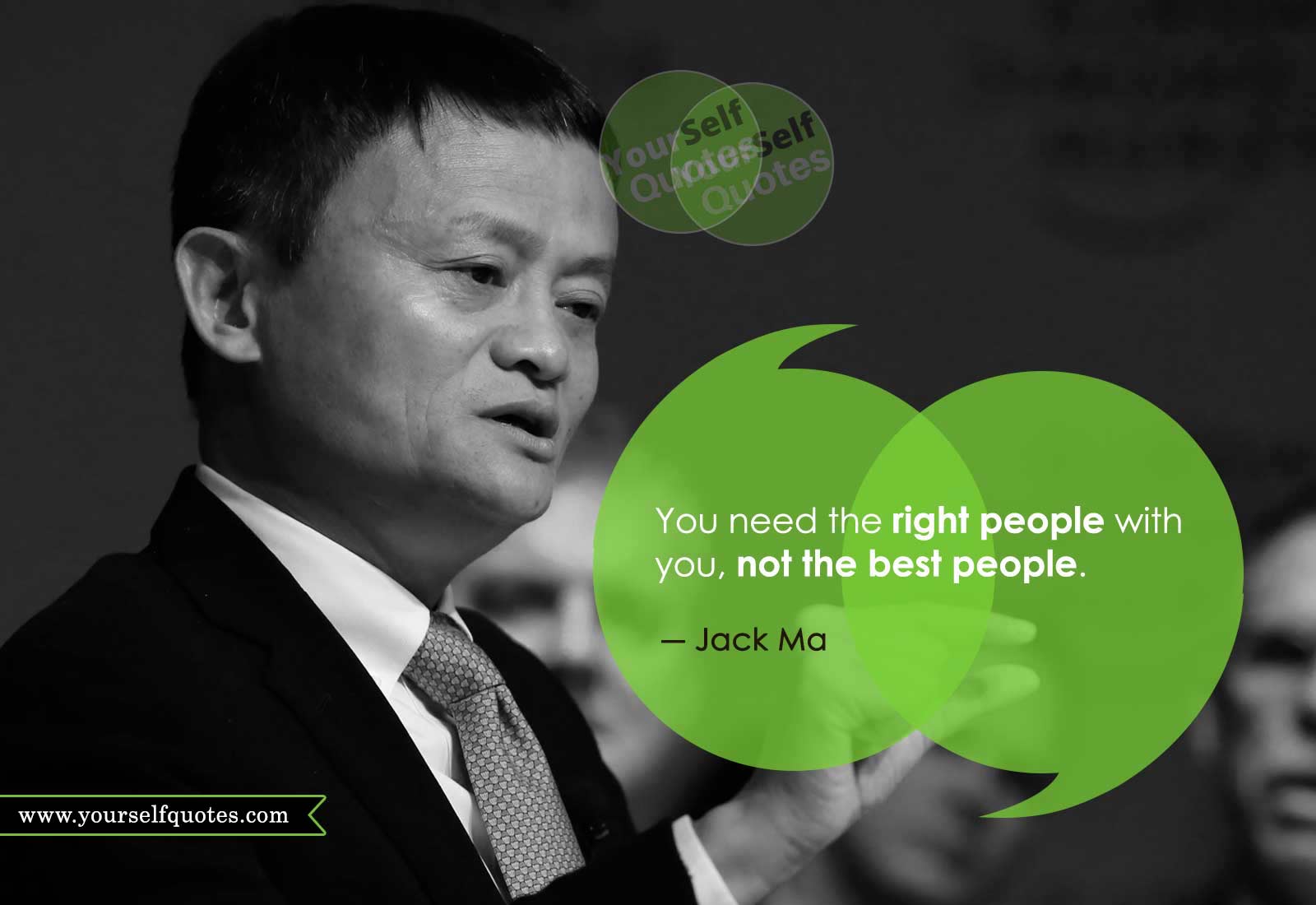 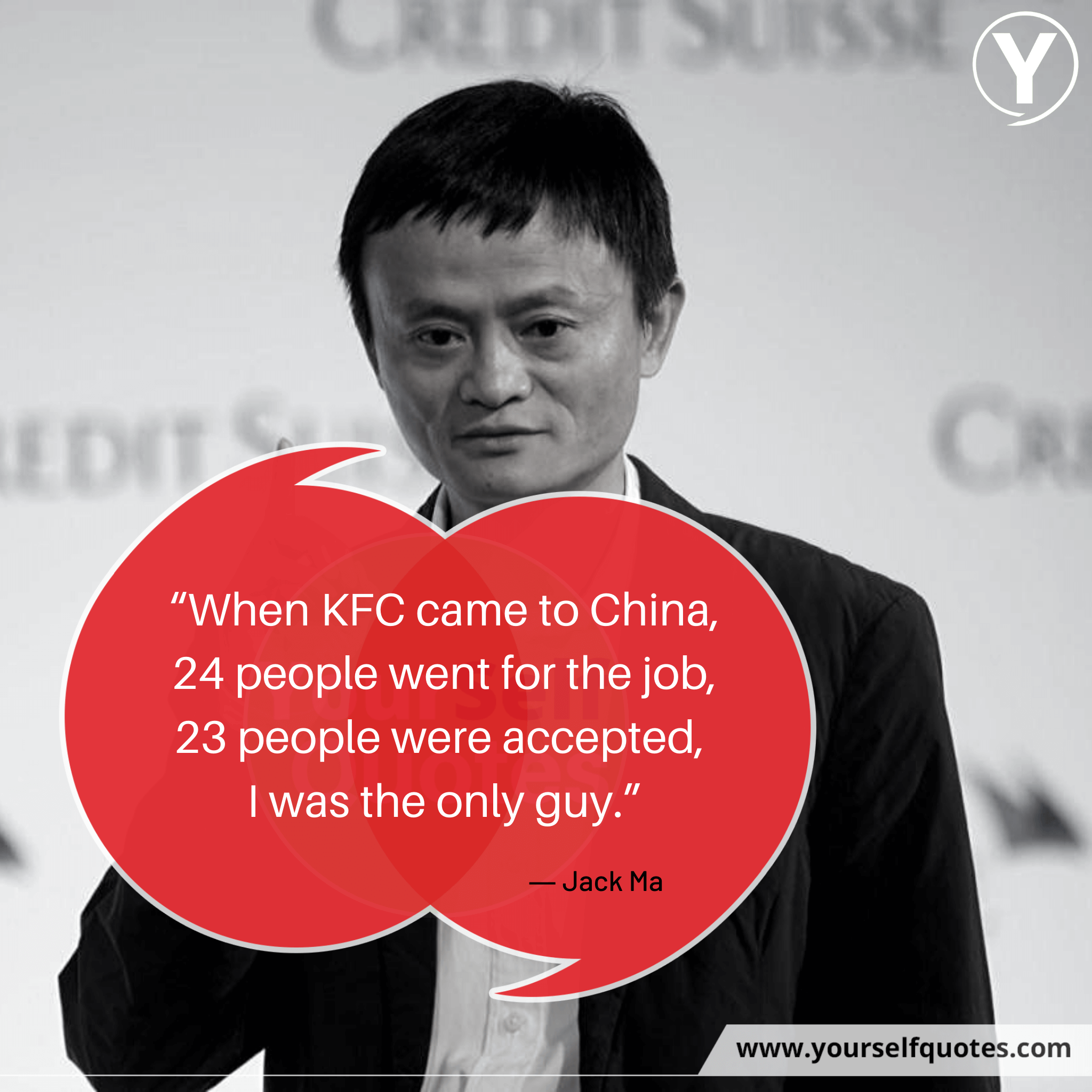 “If you want to win in the 21st century, you have to empower others, making sure other people are better than you. Then you will be successful.” ― Jack Ma 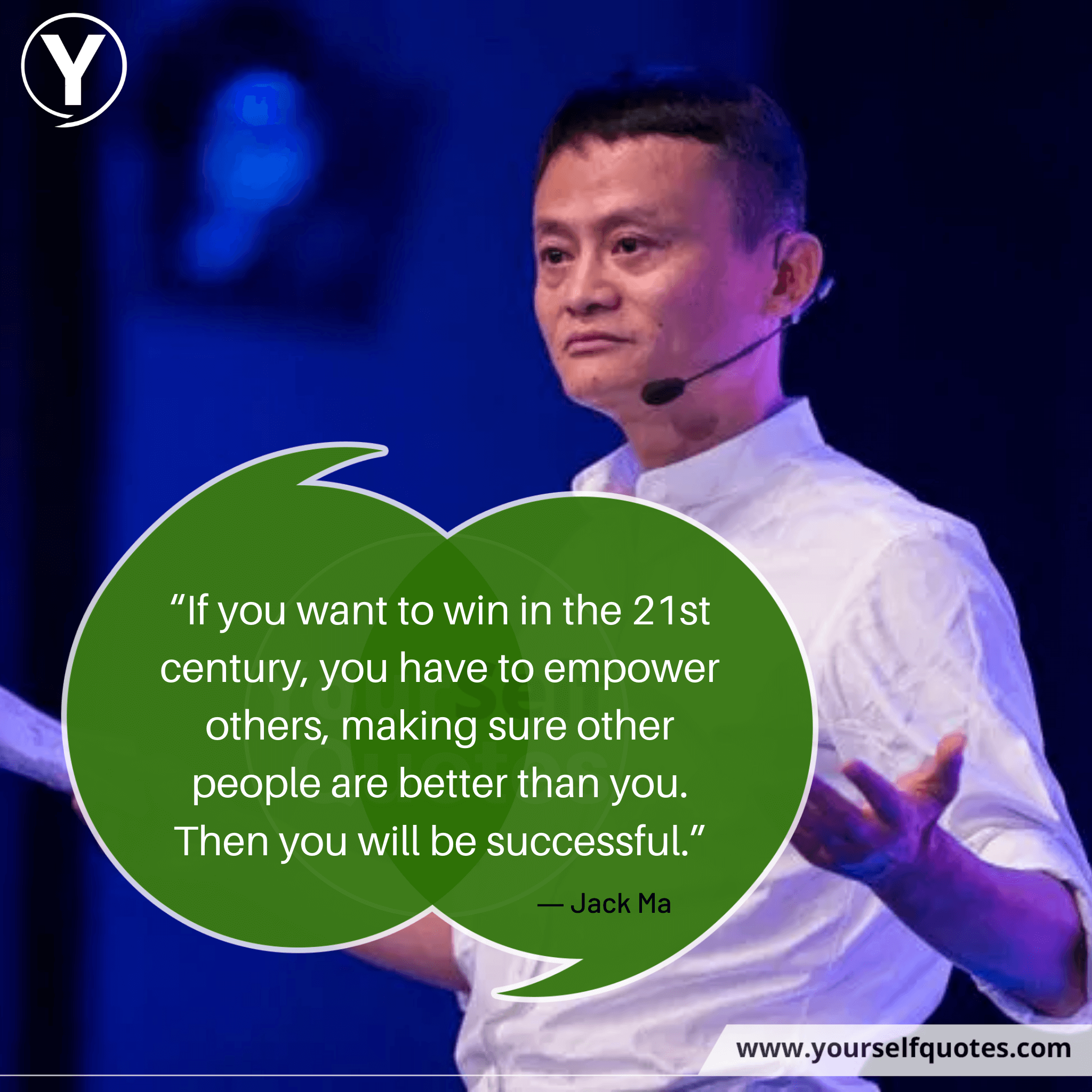 “If you want to grow, find a good opportunity if you want to be a great company, think about what social problem you could solve.” ― Jack Ma 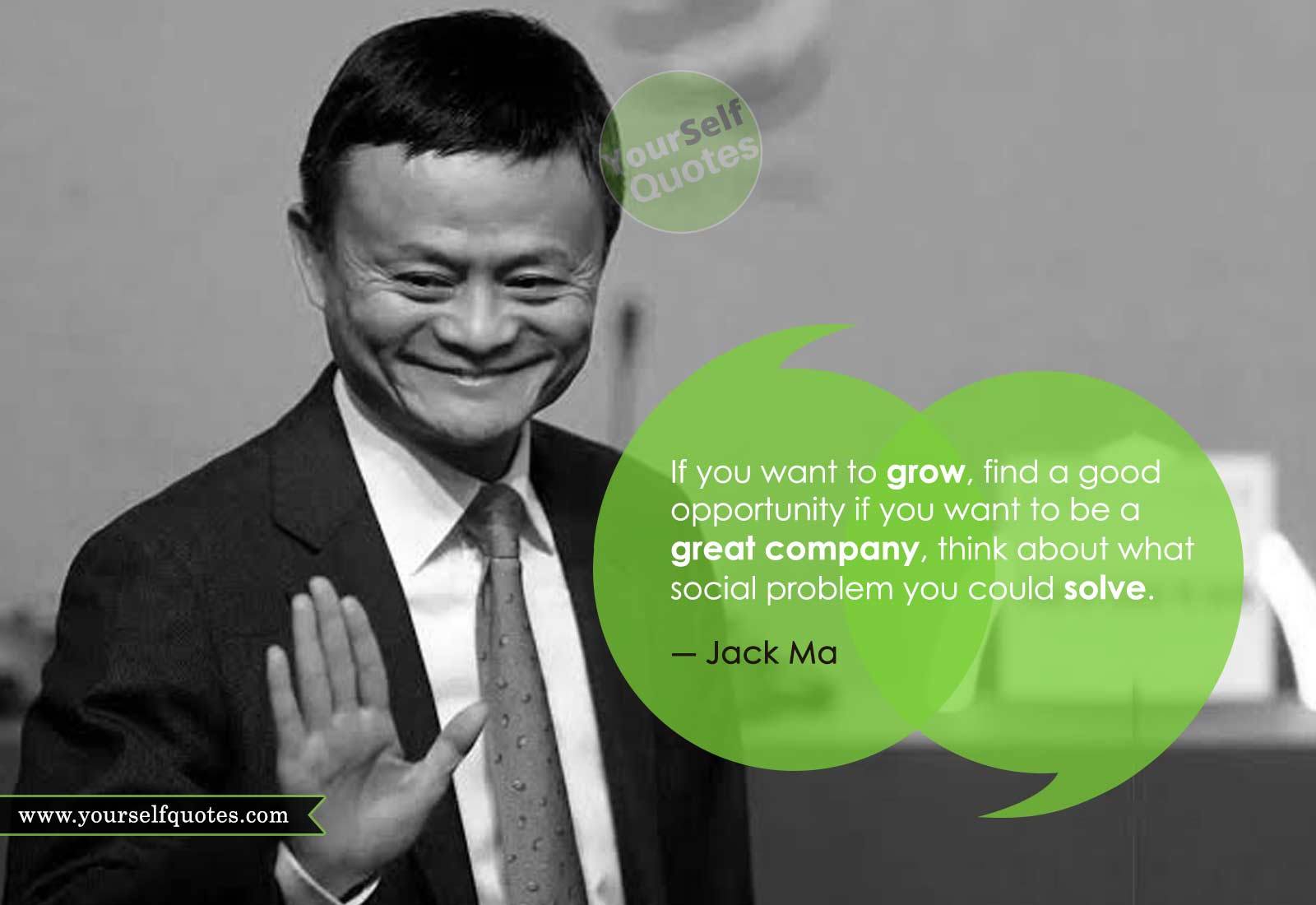 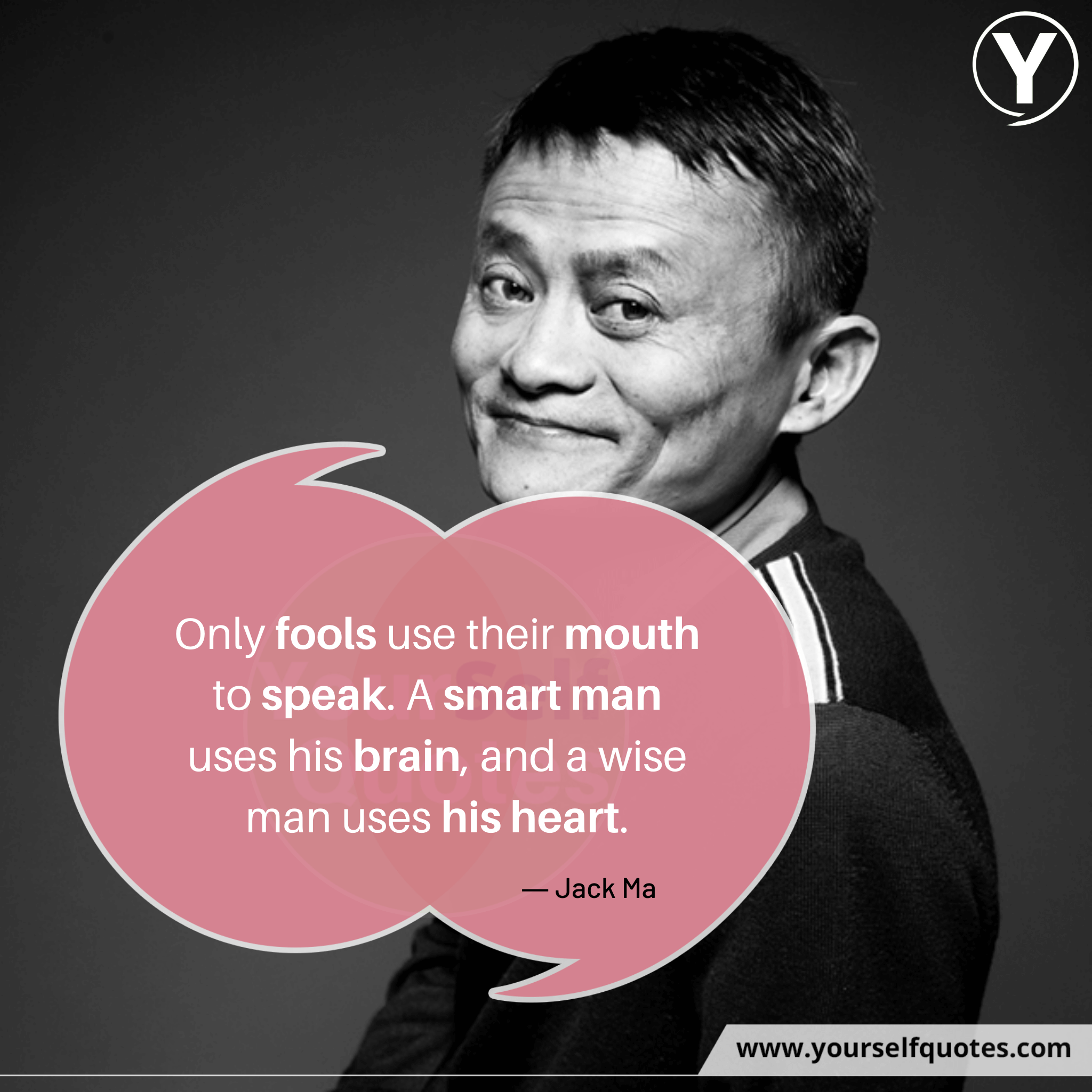 “If you want to be a great company, think about what social problem you can solve. It’s about solving social problems.” ― Jack Ma 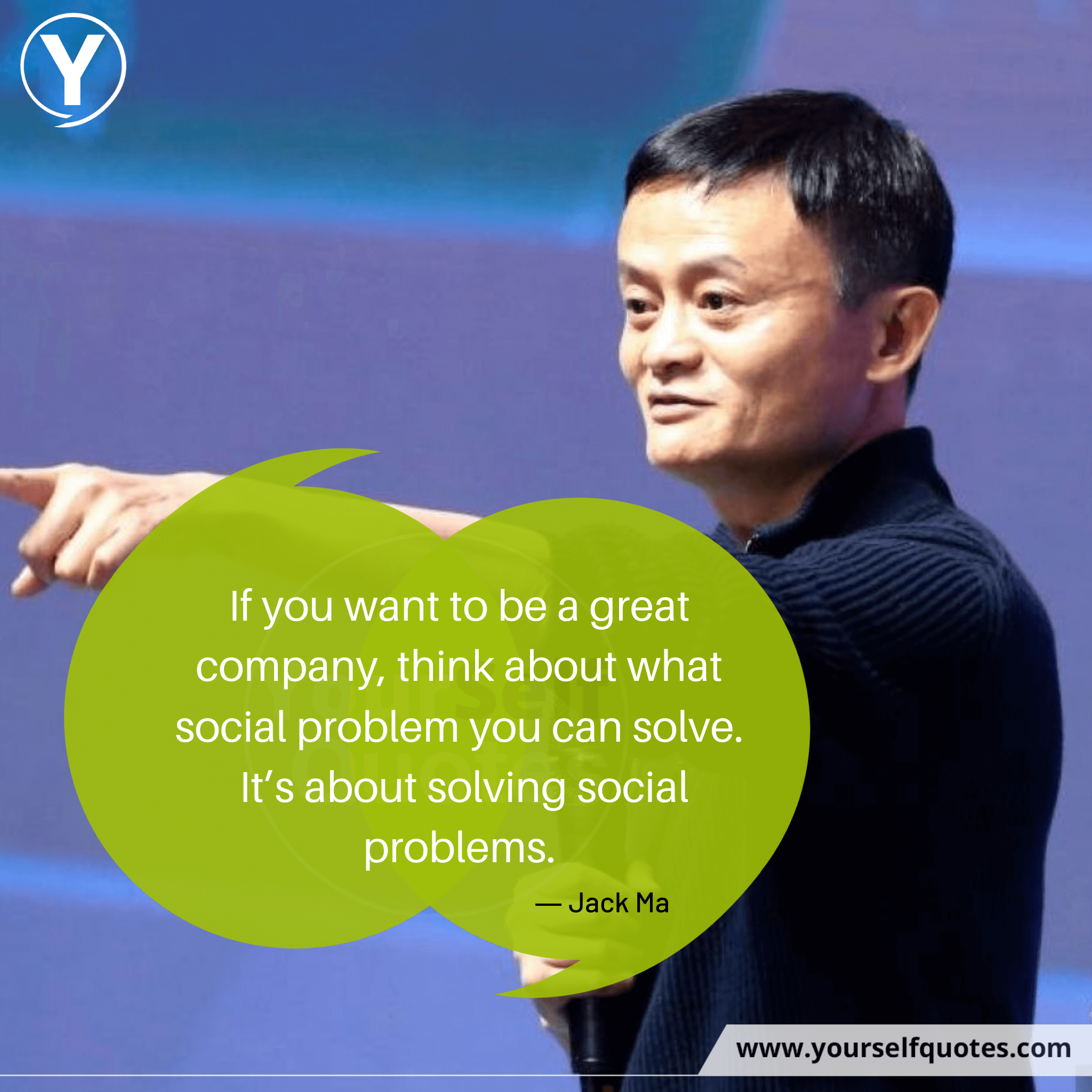 “Help young people. Help small guys. Because small guys will be big. Young people will have the seeds you bury in their minds, and when they grow up, they will change the world.” ― Jack Ma

“if you want your company to operate with wisdom, with care, then woman are the best.” ― Jack Ma 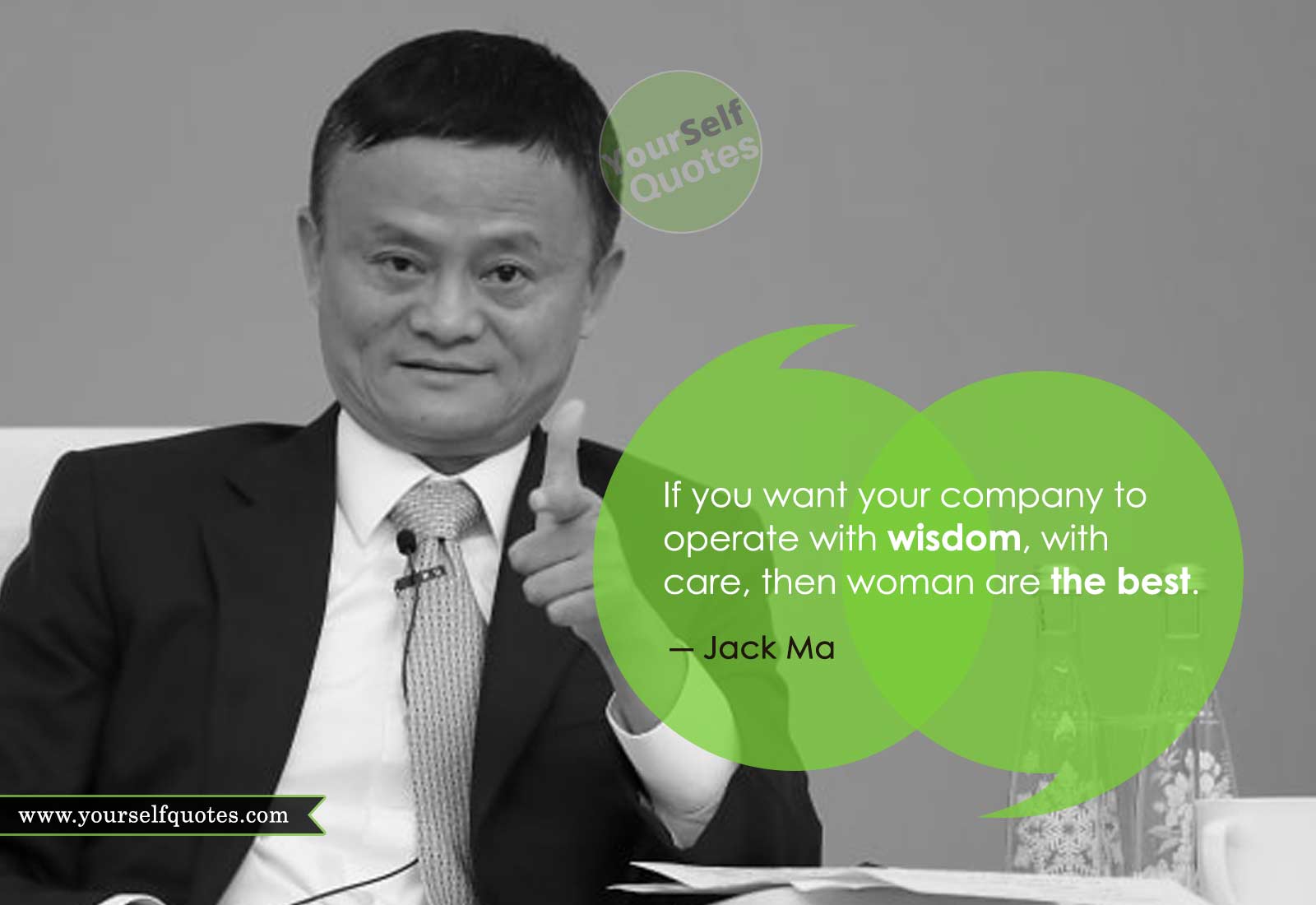 “If we are working together, that will make us understand each other, appreciate each other, help each other.” ― Jack Ma 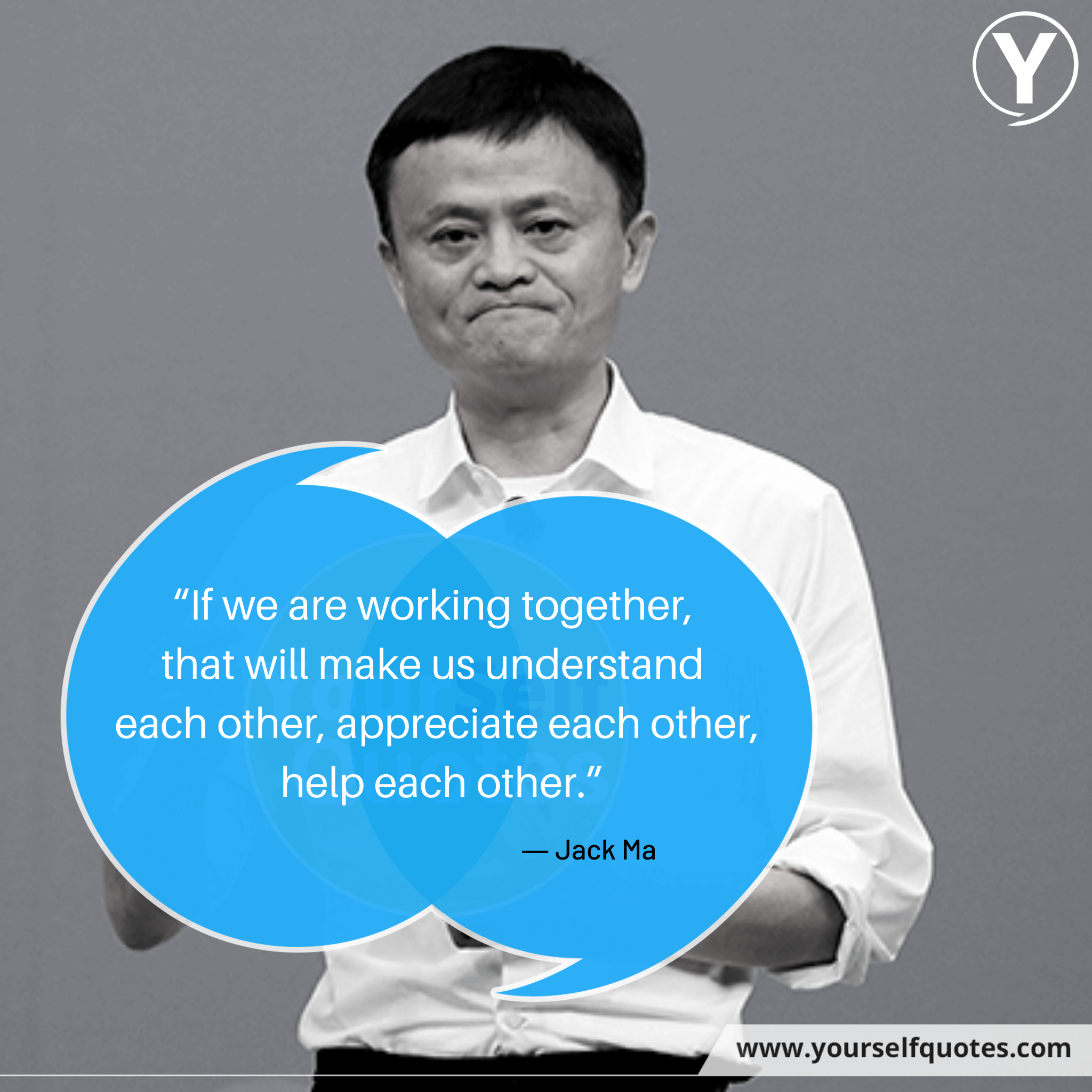 “There’s an examination for young people to go to university. I failed it three times. I failed a lot. So I applied to 30 different jobs and got rejected. I went for a job with the police; they said, ‘You’re no good.’ I even went to KFC when it came to my city. Twenty-four people went for the job.” ― Jack Ma 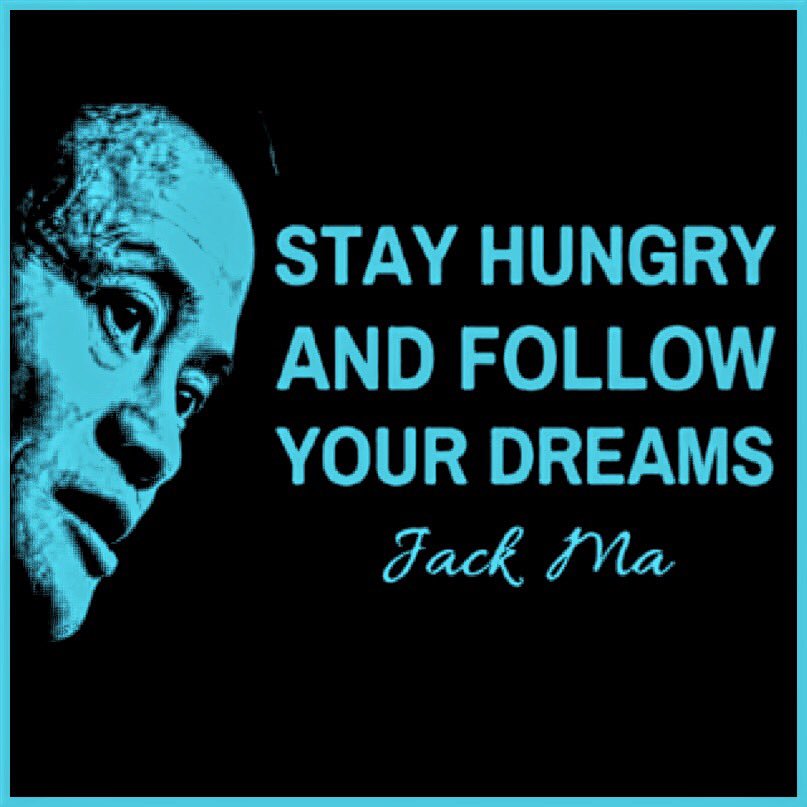 “Today, making money is very simple. But making sustainable money while being responsible to society and improving the world is very difficult.” ― Jack Ma

“The very important thing you should have is patience.” ― Jack Ma 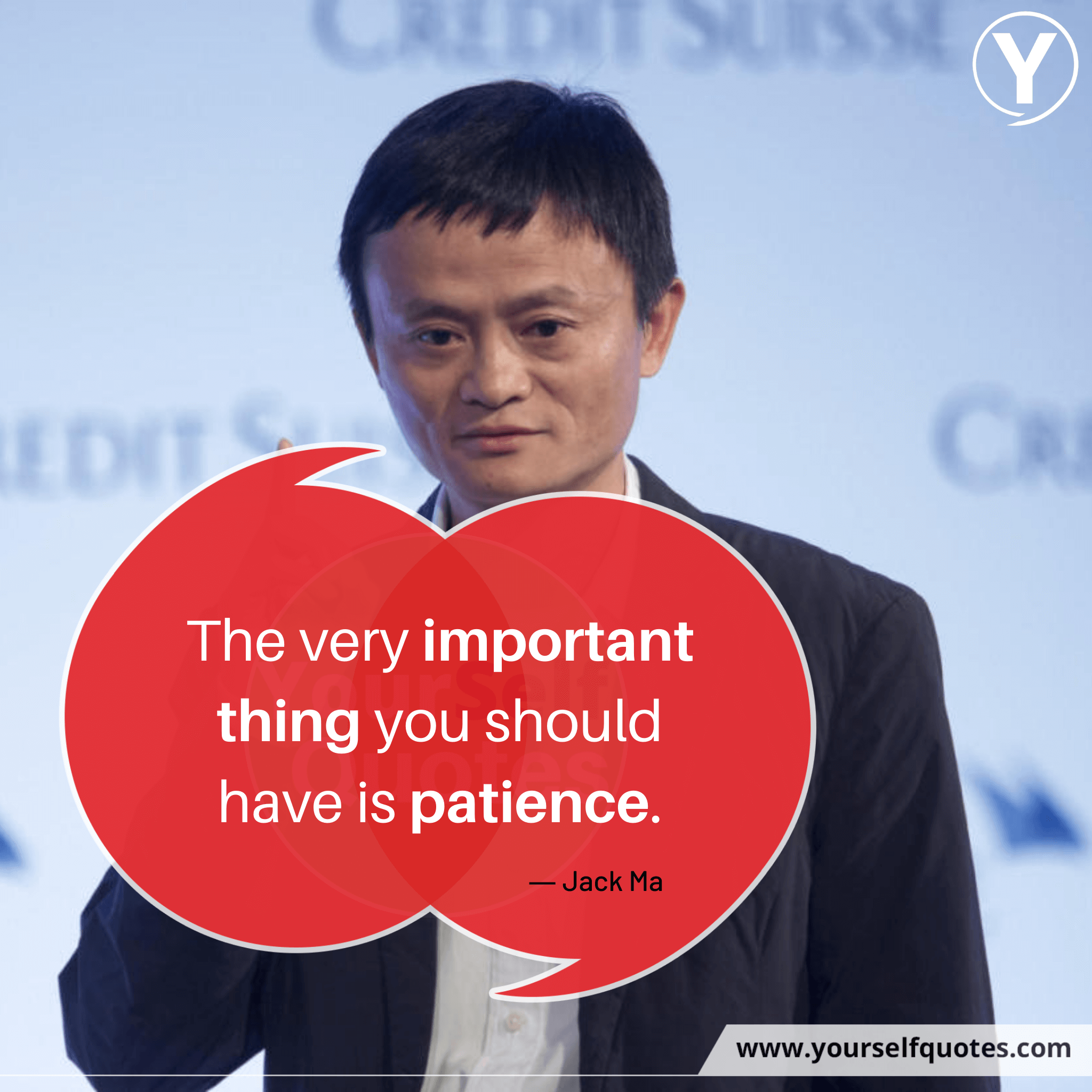 “We are never in lack of money. We lack people with dreams, who can die for those dreams.” ― Jack Ma

“The opportunity lies in the places where complaints are.” ― Jack Ma 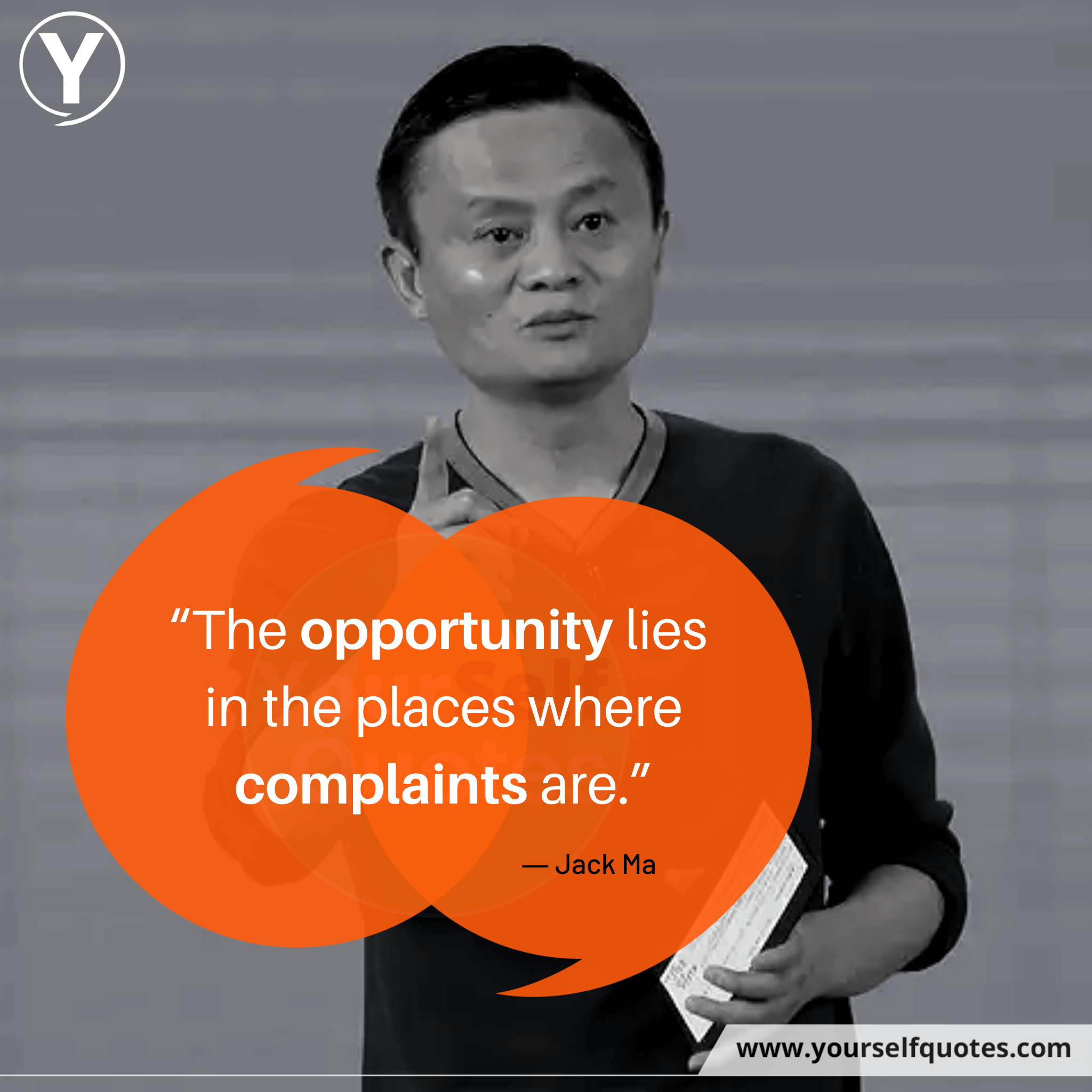 “Failure is the road you will travel to success. Just be sure to take the correct exit.”  ― Jack Ma

“When I am myself, I am happy and have a good result.” ― Jack Ma 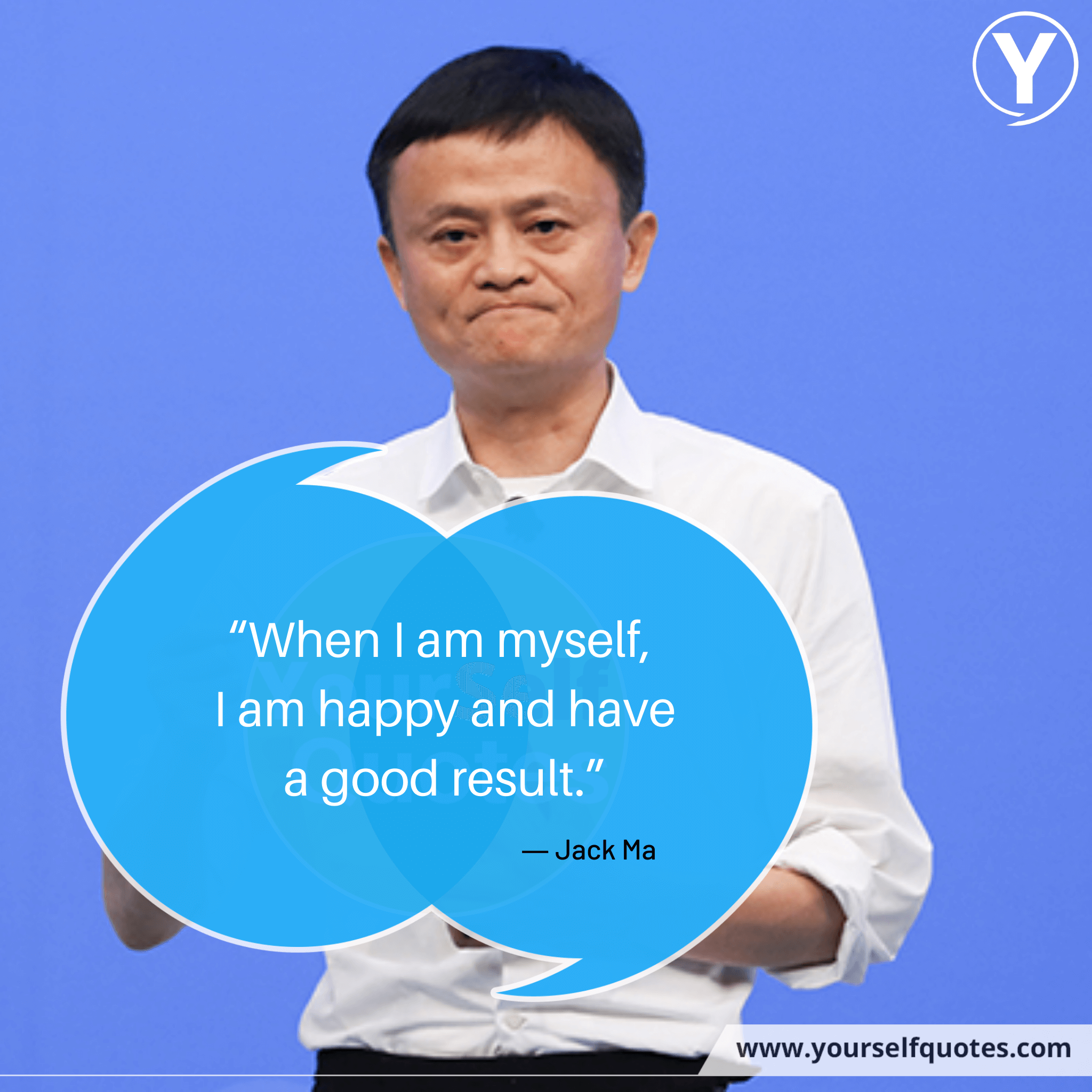 “if you don’t give up, You still have a chance. Giving up is the greatest failure.” ― Jack Ma 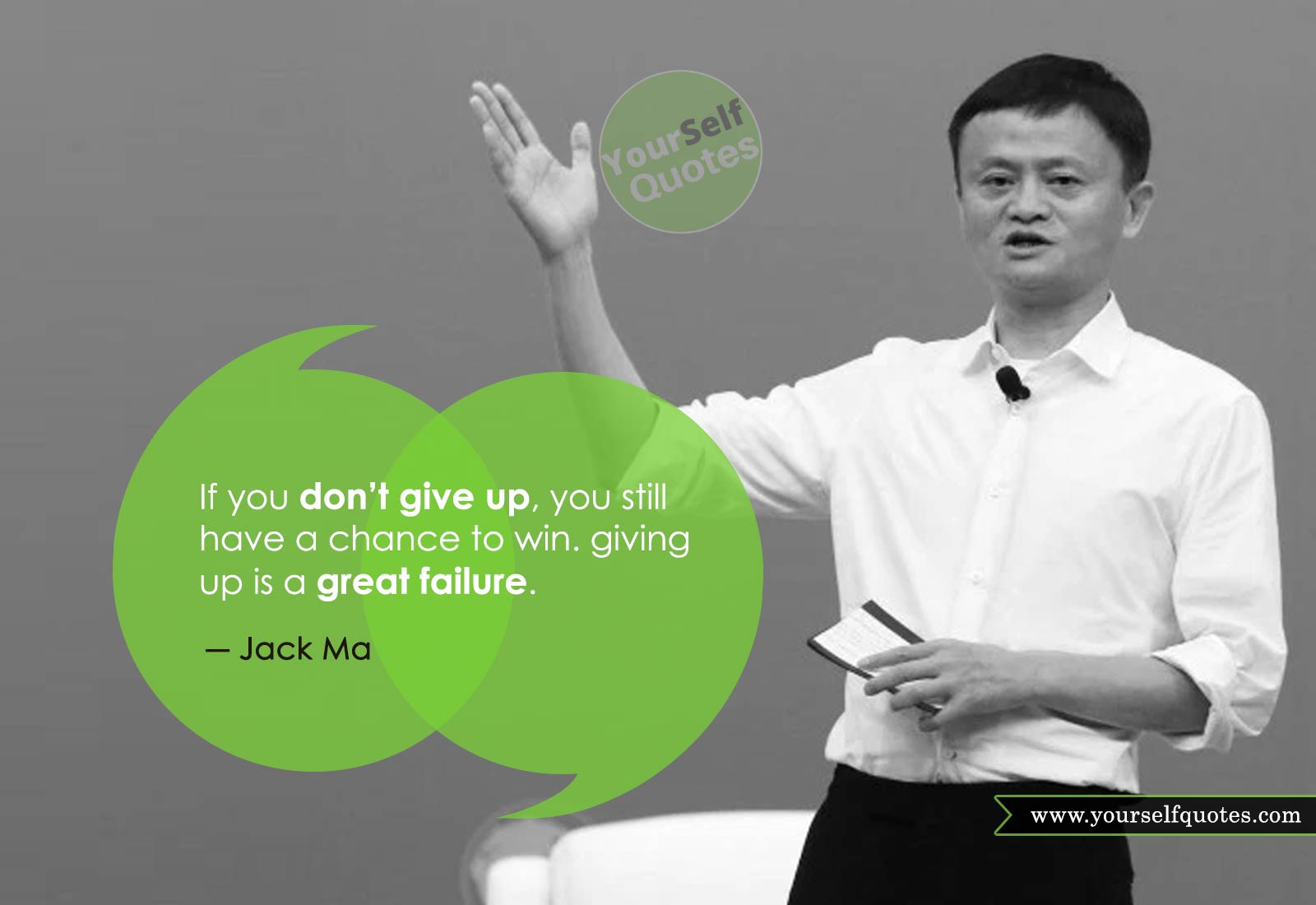 The magical man Jack Ma Alibaba will be known for his dedication and a spirit of never give up. He always thinks out of a box and proved it. Jack Ma quotes images that teach us to believe in our strength and never give up and do hard work one day you will get success. Let’s write your comment and describe your thought which stopping you do something in life.

Thank you for visiting our page, Also keep visiting Yourself Quotes for more updates and share, comment with your friends!!!

Best Motivational Quotes That Can Motivate You To Do Something Big