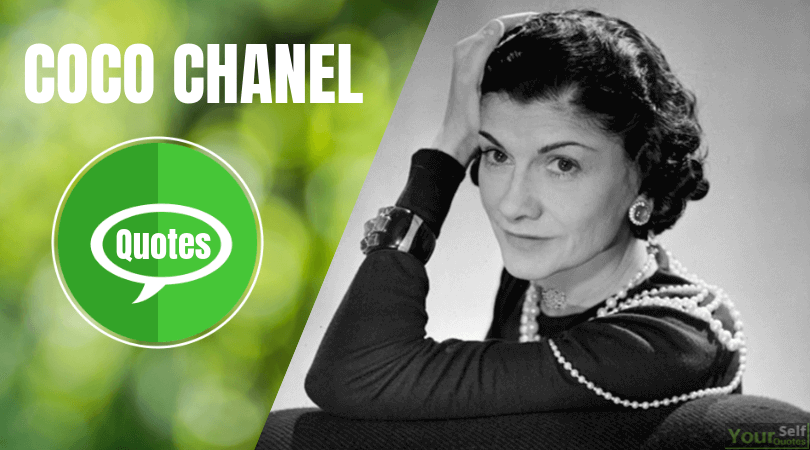 Gabrielle Bonheur “Coco” Chanel, popularly known by the world as Coco Chanel, was a famous French Fashion Designer. She was one of the reputed Nazi spy and a successful businesswoman. She was the founder and namesake of the Chanel brand. She herself designed the logo of her brand which famed interlocked- CC monogram.

Coco Chanel Family: Coco was born to Eugénie Jeanne Devolle — known as Jeanne —a laundrywoman and Albert Chanel. Her father Albert was an itinerant street vendor who peddled work clothes and undergarments.

Chanel learned how to sew clothes at a very early age of 6 years. In her early days, she used to act as a poseuse, a performer who entertained the crowd between star turns. Later she worked at a spa resort town of Vichy in 1906. By 1918, she purchased the building at 31 rue Cambon, in one of the most fashionable districts of Paris. In 1921, she started an early incarnation of a fashion boutique, featuring clothing, hats, and accessories later expanded to offer jewelry and fragrances. Her couture was a lucrative business enterprise, by 1935 employing 4,000 people.

Coco uses to be the mistress of some of the most influential men of her time, but she never married. She had significant relationships with the poet Pierre Reverdy and the illustrator and designer Paul Iribe. But she shared a deep involvement with Iribe until his sudden death in 1935.

Chanel made use of jersey, a machine knit material manufactured for her by the firm Rodier, and a fabric traditionally relegated to the manufacture of undergarments. She was successful in introducing the concept of the jersey. Her designed dresses became very popular among masses who had a great love for fashion. The Chanel Suit was designed for comfort and practicality. Then she designed a little black dress which was considered as a Chanel contribution to the fashion lexicon. Her designed jewelry and bags her very popular among the high class of fashion lovers.

Coco Chanel left behind a huge brand for people to adore and love. So let’s find out what she is trying to convey through her fashionable Coco Chanel Quotes.

“Don’t spend time beating on a wall hoping to transform it into a door.” — Coco Chanel 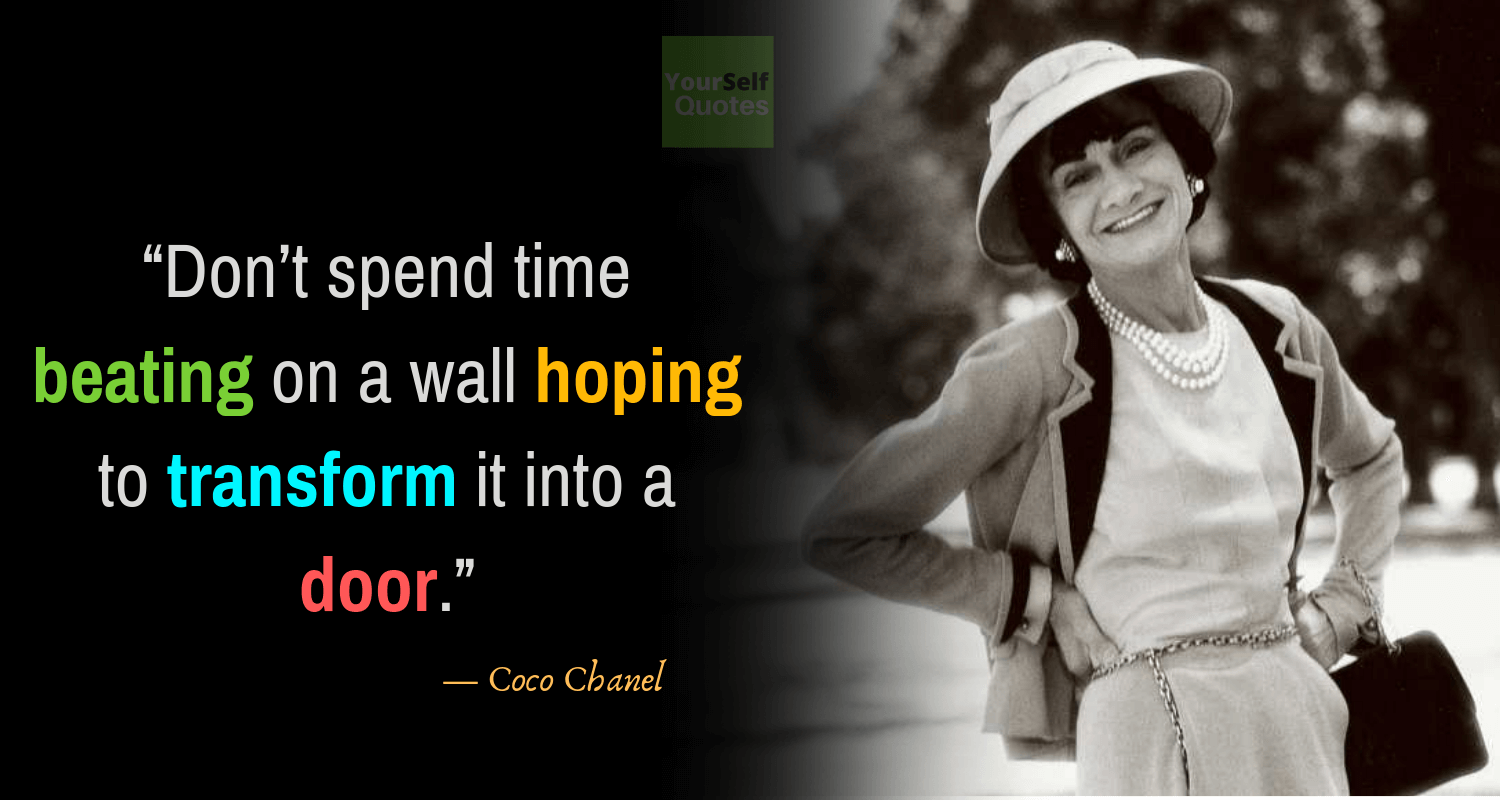 “The most courageous act is still… to think for yourself. Aloud.” — Coco Chanel

“Success is most often achieved by those who don’t know that failure is inevitable.”― Coco Chanel 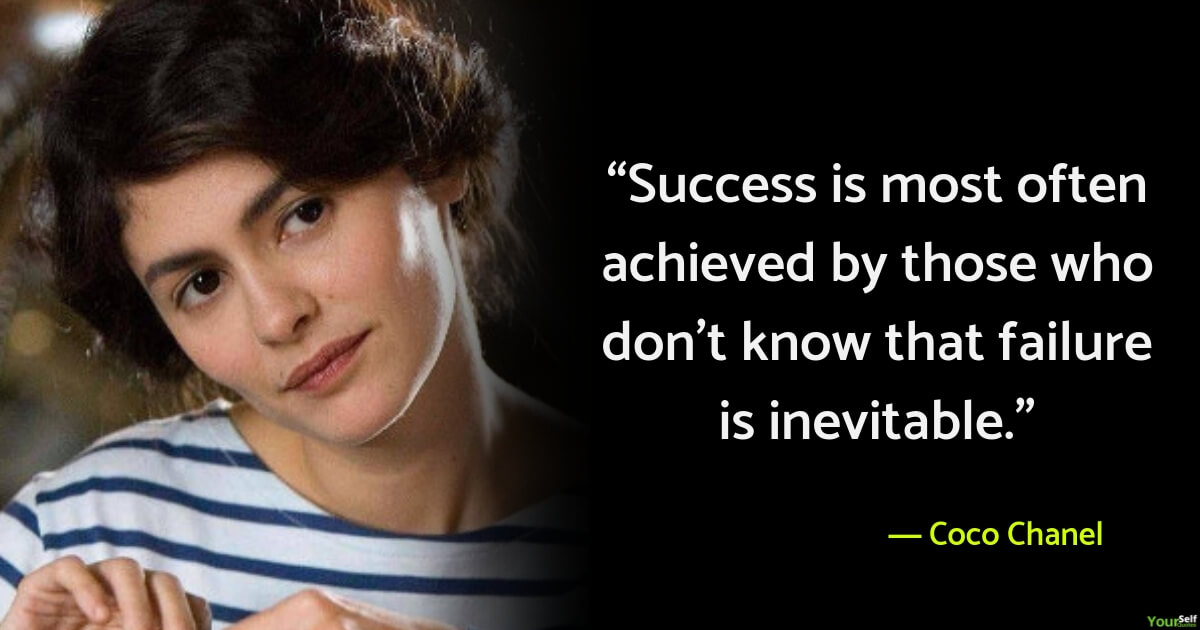 “Not to feel love is to feel rejected regardless of age.” — Coco Chanel 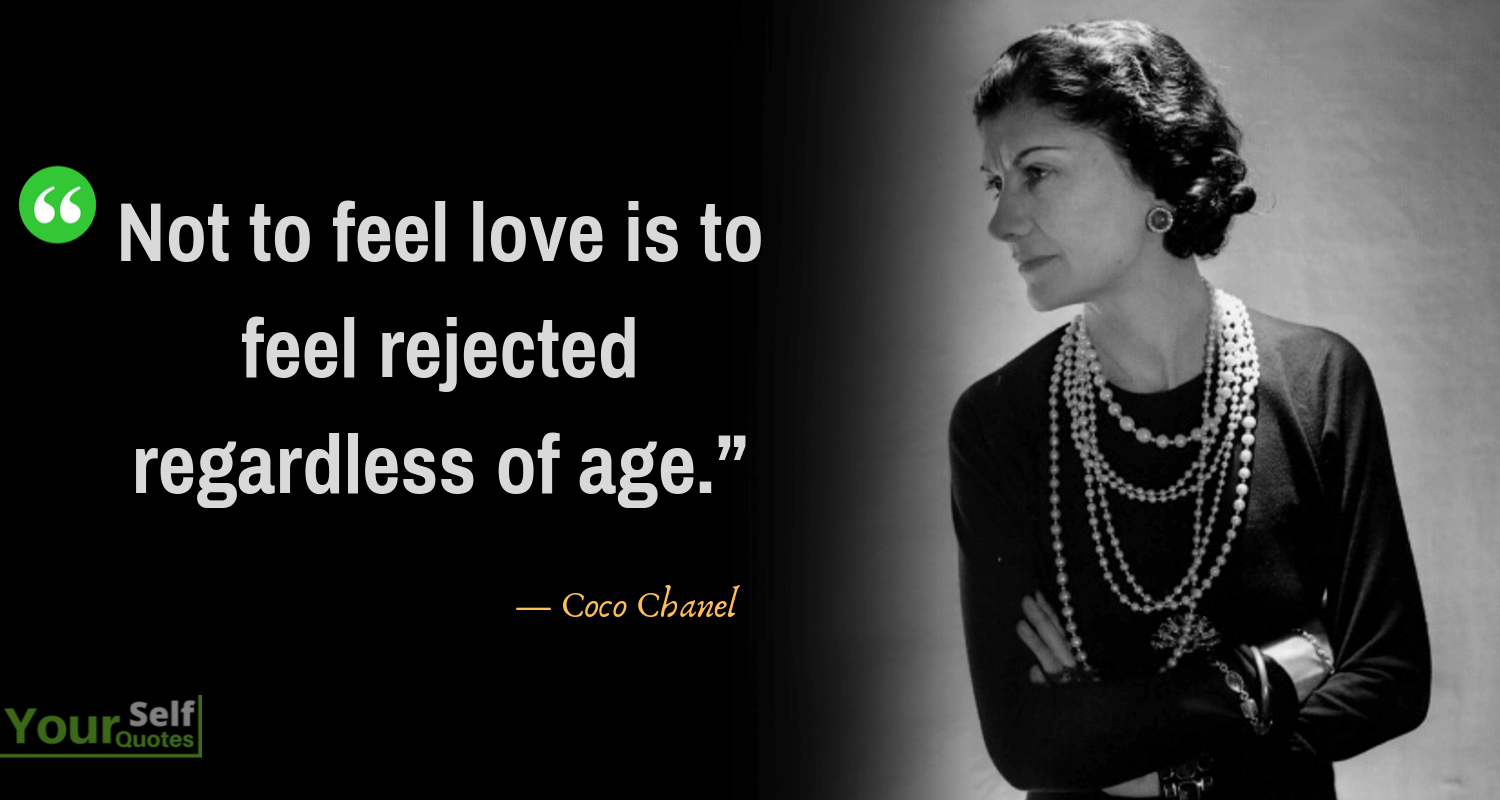 “My life didn’t please me, so I created my life.” — Coco Chanel 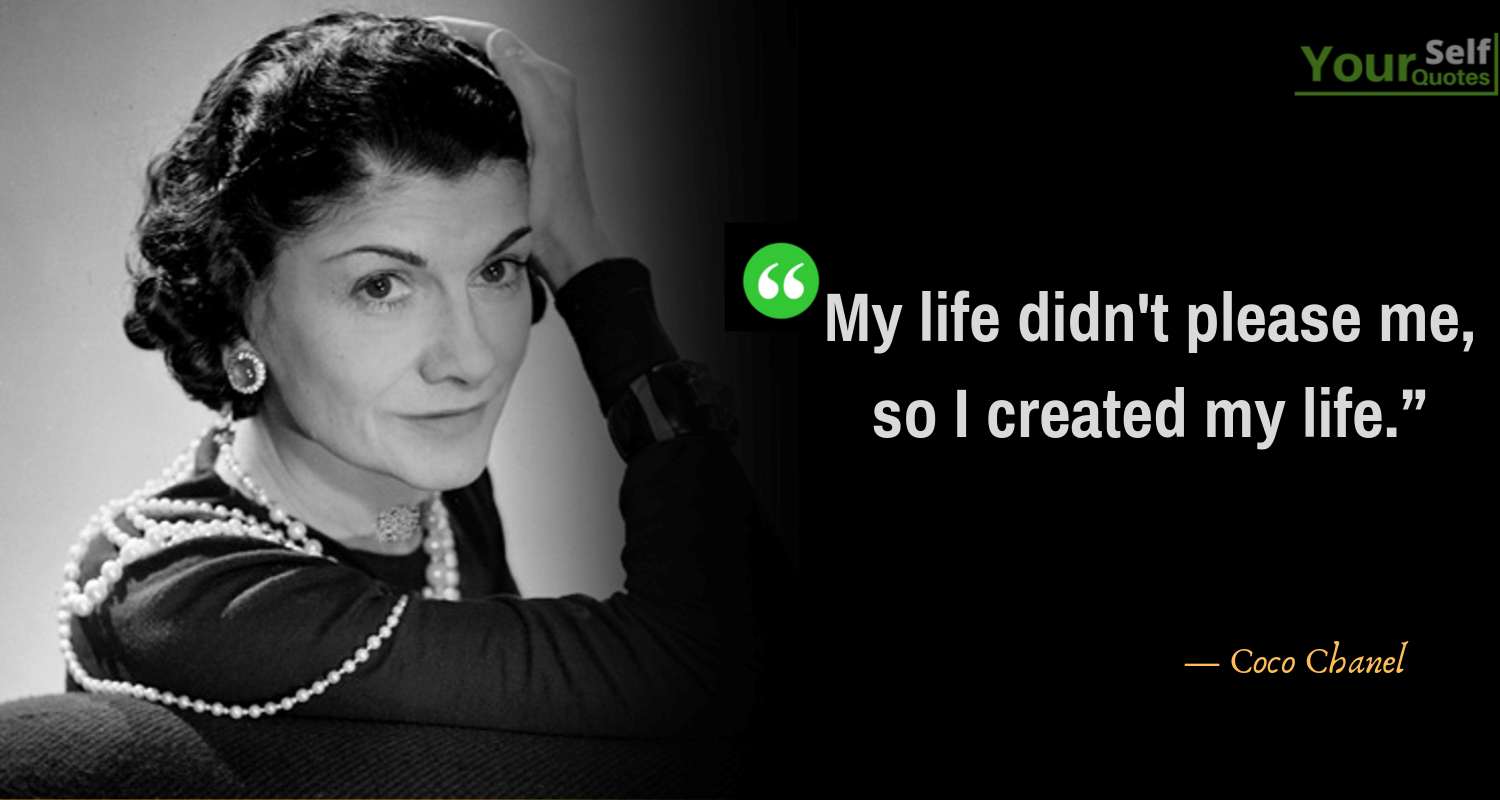 “A women who doesn’t wear perfume has no future.” — Coco Chanel 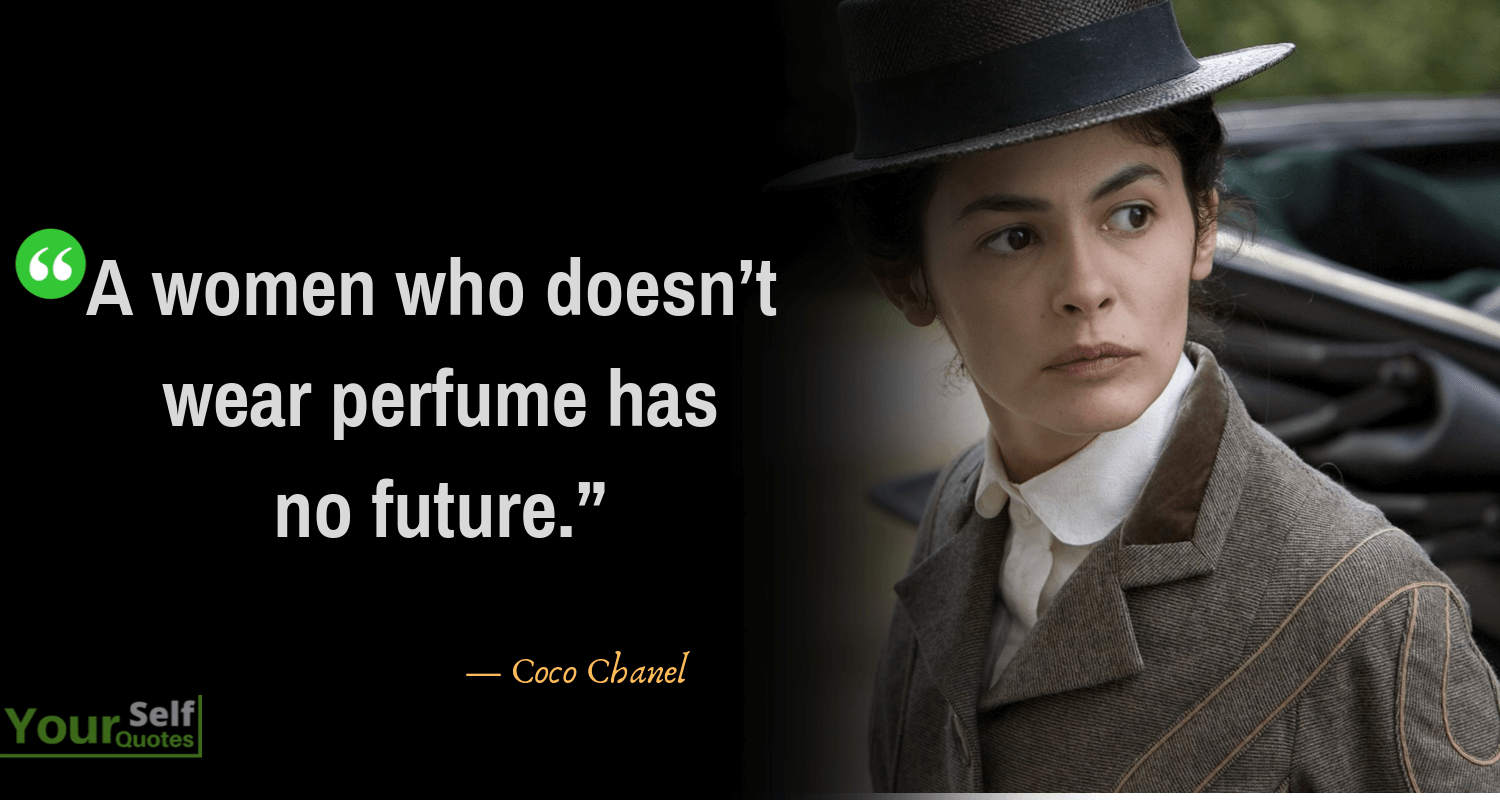 “Look for the woman in the dress. If there is no woman, there is no dress.” — Coco Chanel 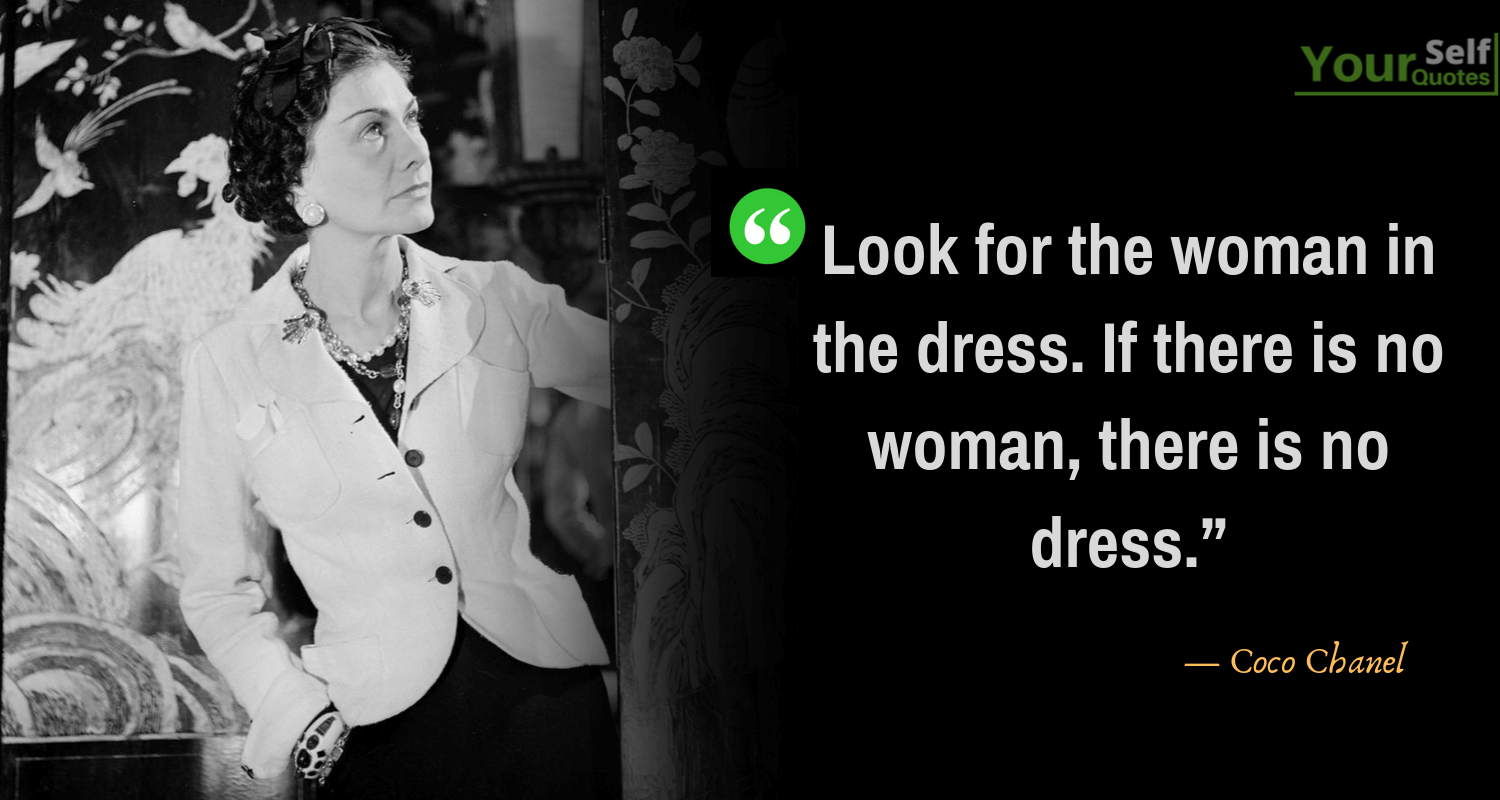 “Fashion is made to become unfashionable.” — Coco Chanel 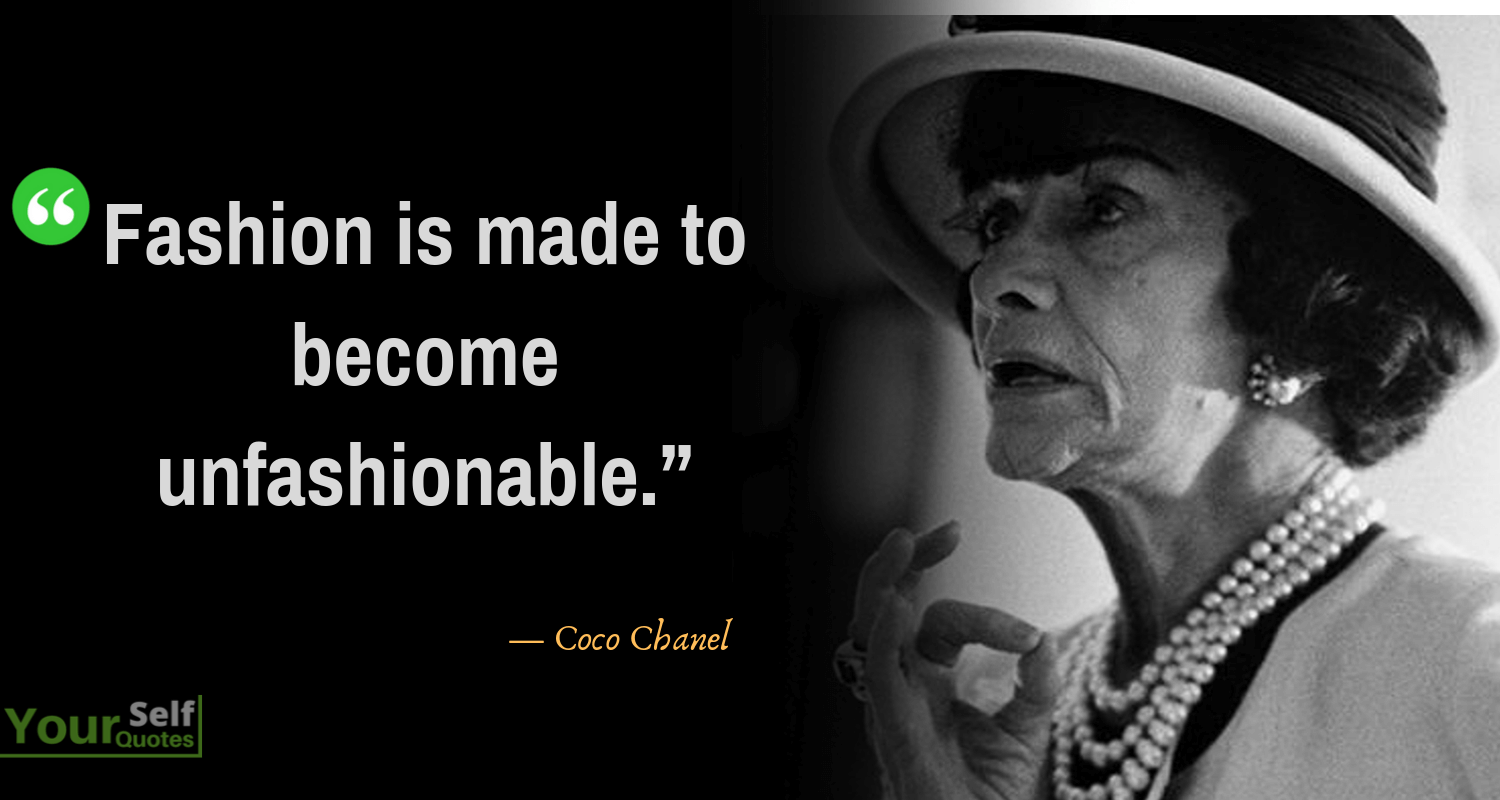 “Fashion is architecture: it is a matter of proportions.” — Coco Chanel 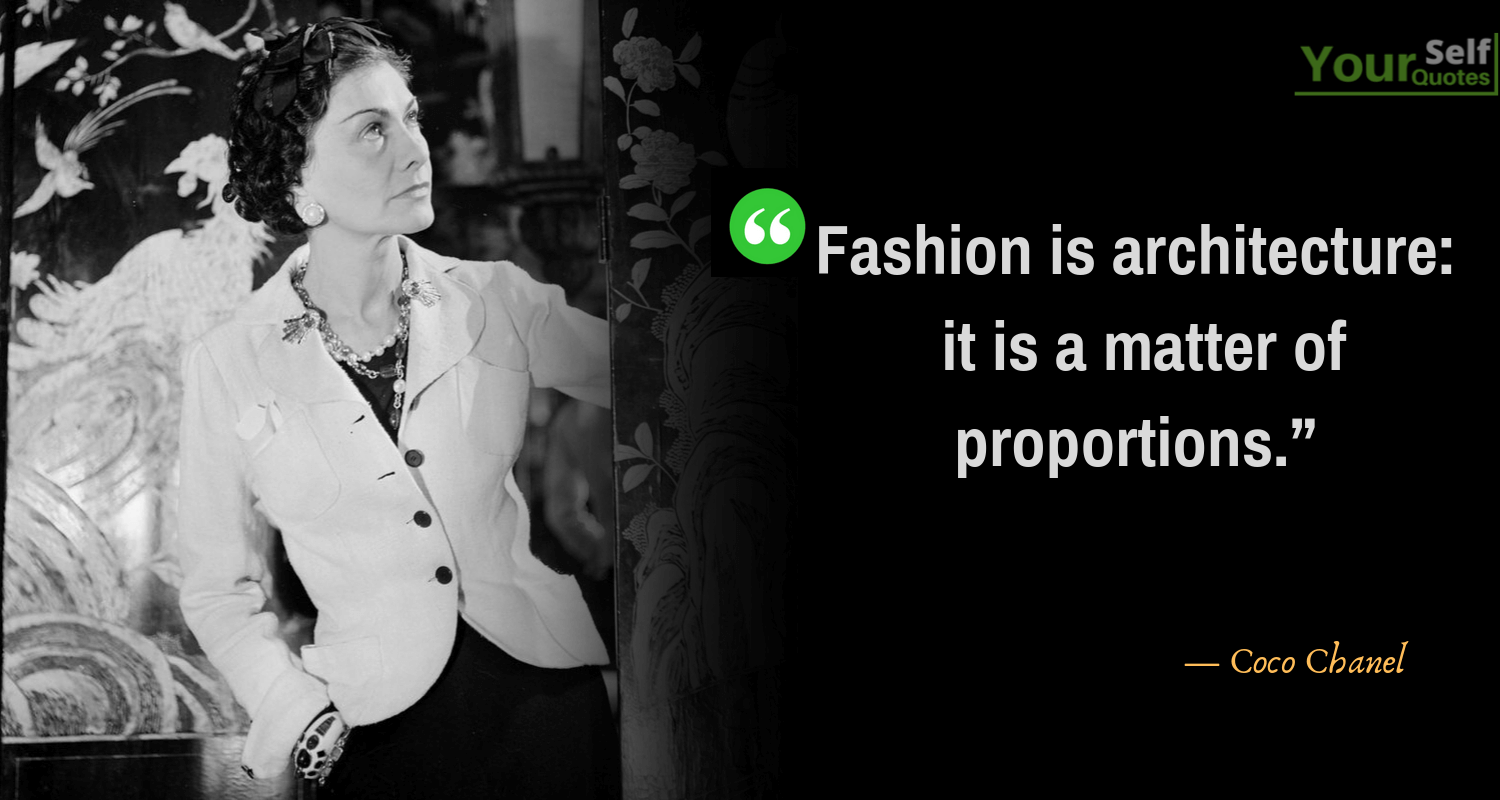 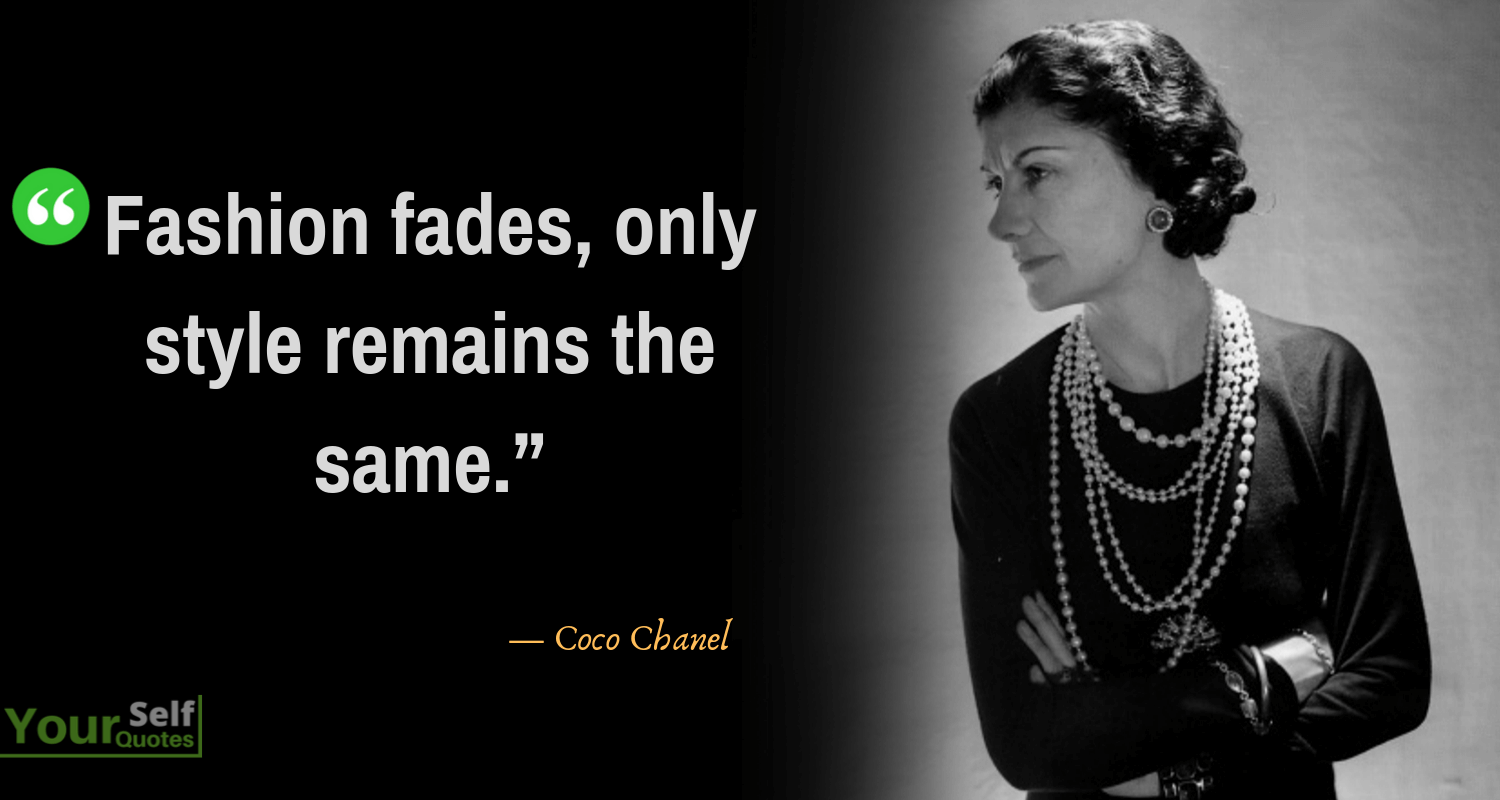 “Fashion is not something that exists in dresses only. Fashion is in the sky, in the street, fashion has to do with ideas, the way we live, what is happening.” — Coco Chanel

“Gentleness doesn’t get work done unless you happen to be a hen laying eggs.” — Coco Chanel 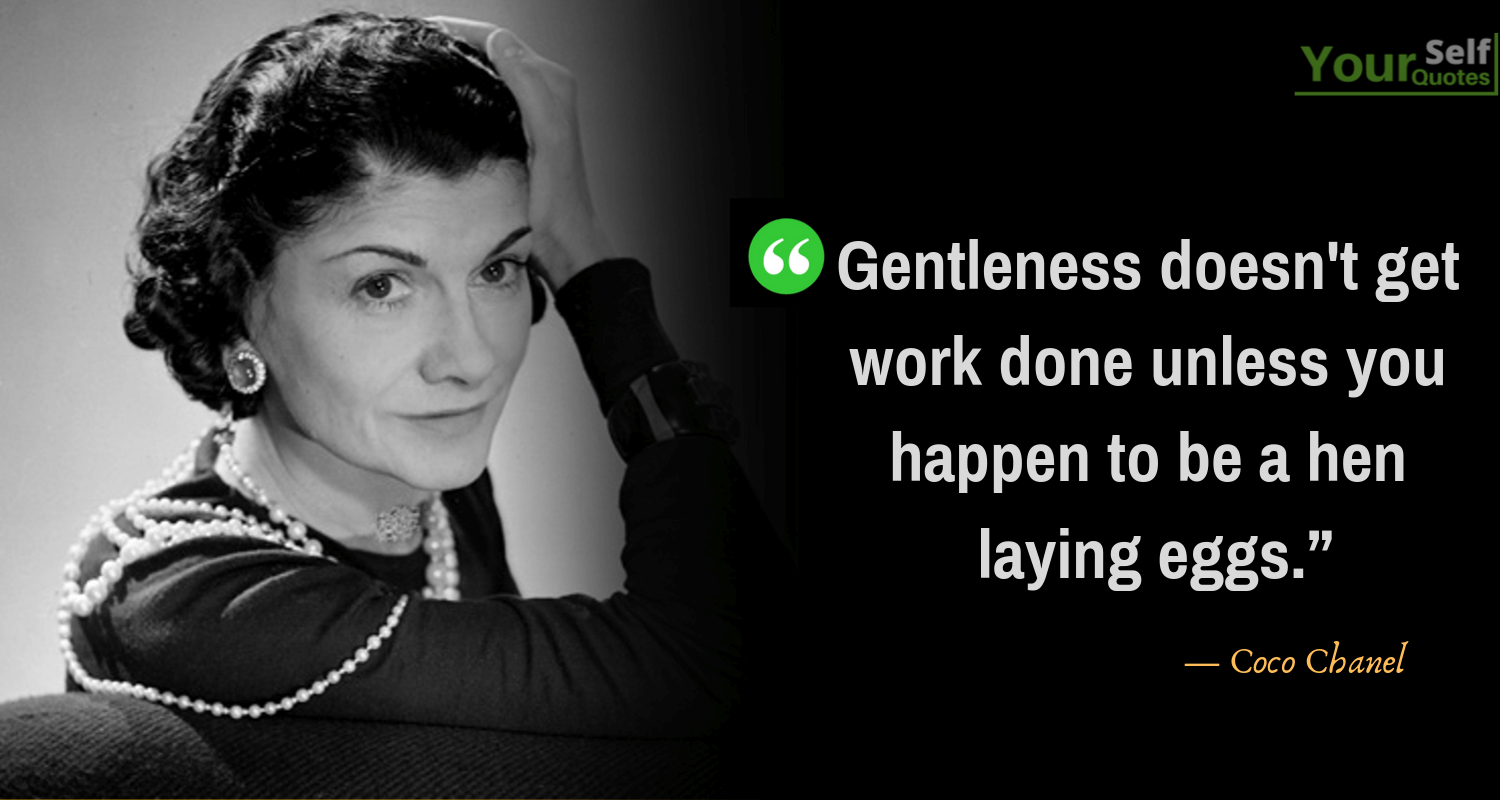 “Fashion has become a joke. The designers have forgotten that there are women inside the dresses. Most women dress for men and want to be admired. But they must also be able to move, to get into a car without bursting their seams! Clothes must have a natural shape.” — Coco Chanel

“Dress like you are going to meet your worst enemy today.” — Coco Chanel 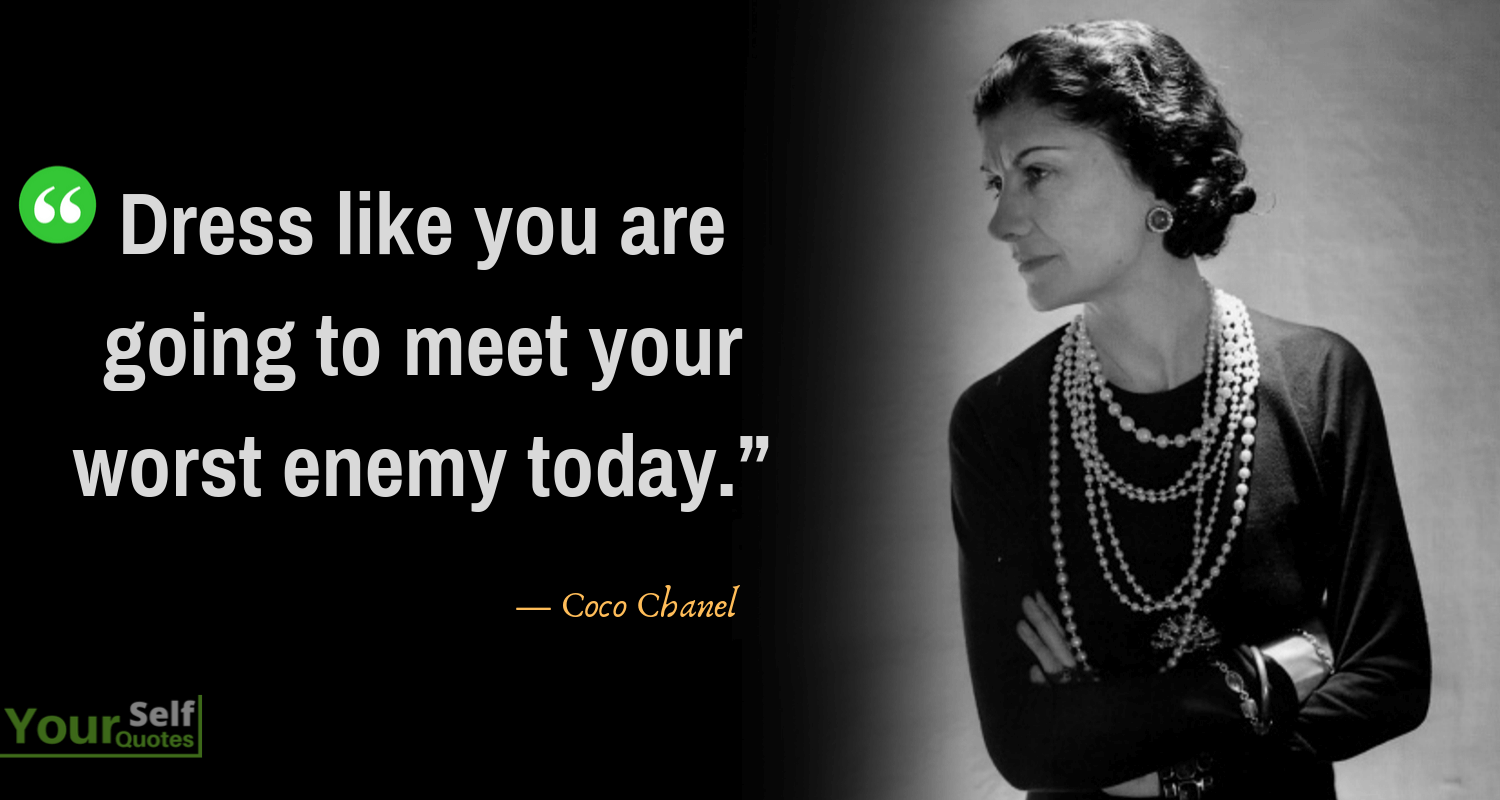 “Only those with no memory insist on their originality.” — Coco Chanel 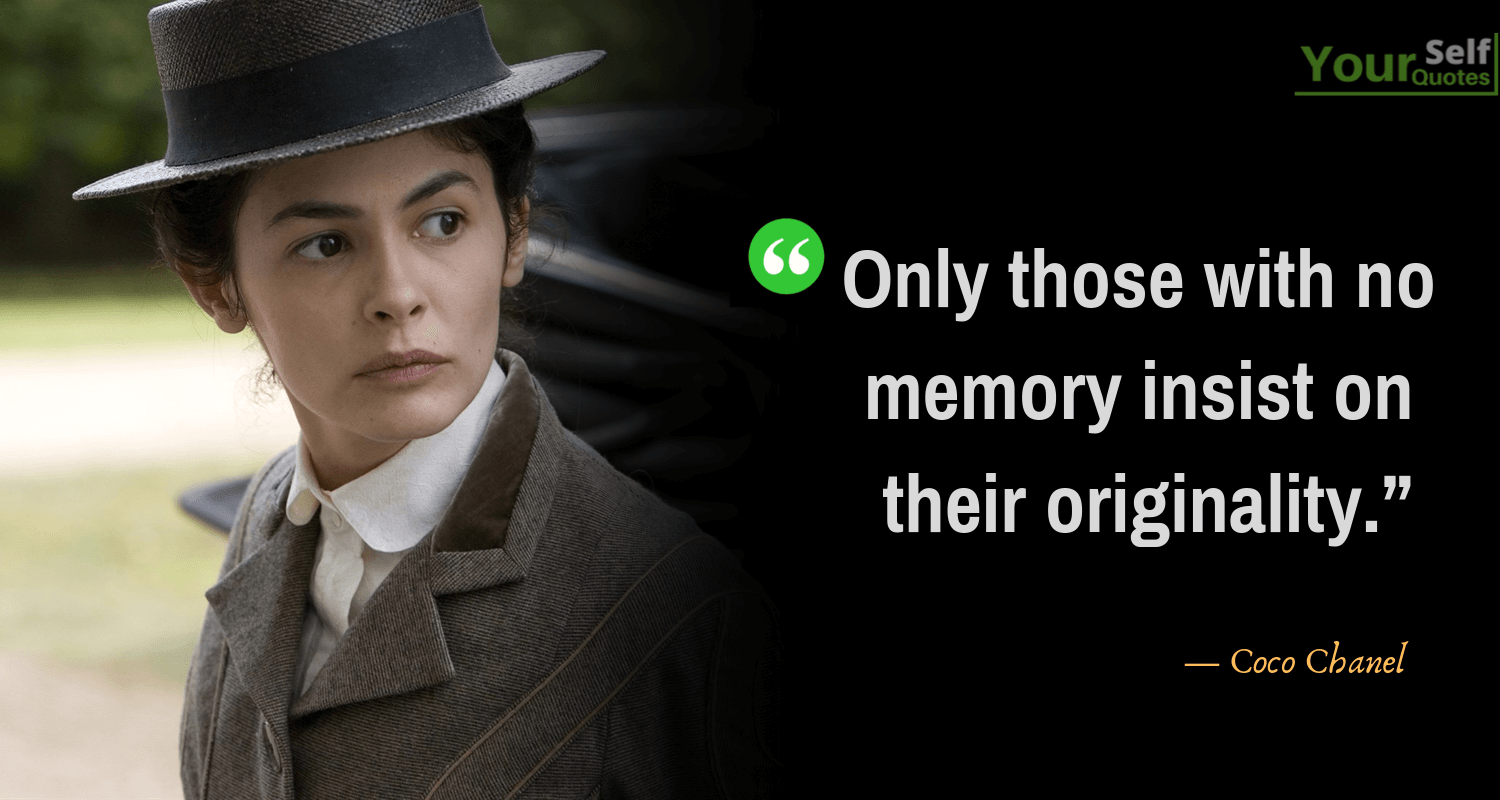 “Women have always been the strong ones of the world. The men are always seeking from women a little pillow to put their heads down on. They are always longing for the mother who held them as infants.” — Coco Chanel

“The best color in the world is the one that looks good on you.” — Coco Chanel 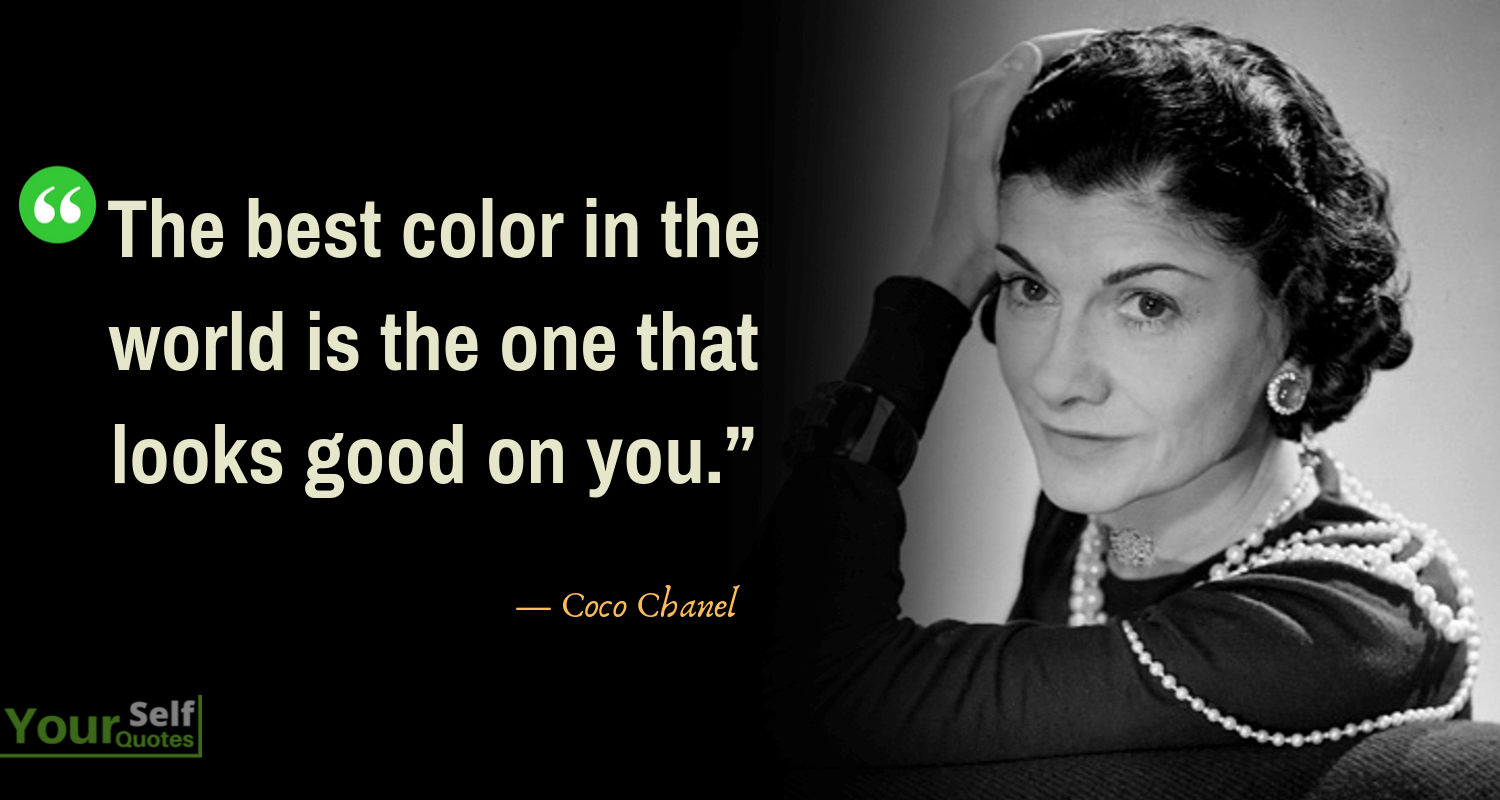 “I love luxury. And luxury lies not in richness and ornateness but in the absence of vulgarity. Vulgarity is the ugliest word in our language. I stay in the game to fight it.” — Coco Chanel

“Do not waste precious time hitting on a wall in the hope to transform it into a door.” ― Coco Chanel

“I don t understand how a woman can leave the house without fixing herself up a little – if only out of politeness. And then, you never know, maybe that s the day she has a date with destiny. And it s best to be as pretty as possible for destiny.” — Coco Chanel

“If you are sad, if you are heartbroken, make yourself up, dress up, add more lipstick and attack. Men hate women who weep.” — Coco Chanel

“You can never take too much care over the choice of your shoes. Too many women think that they are unimportant, but the real proof of an elegant woman is what is on her feet.” — Coco Chanel

“You can be gorgeous at thirty, charming at forty, and irresistible for the rest of your life.” — Coco Chanel 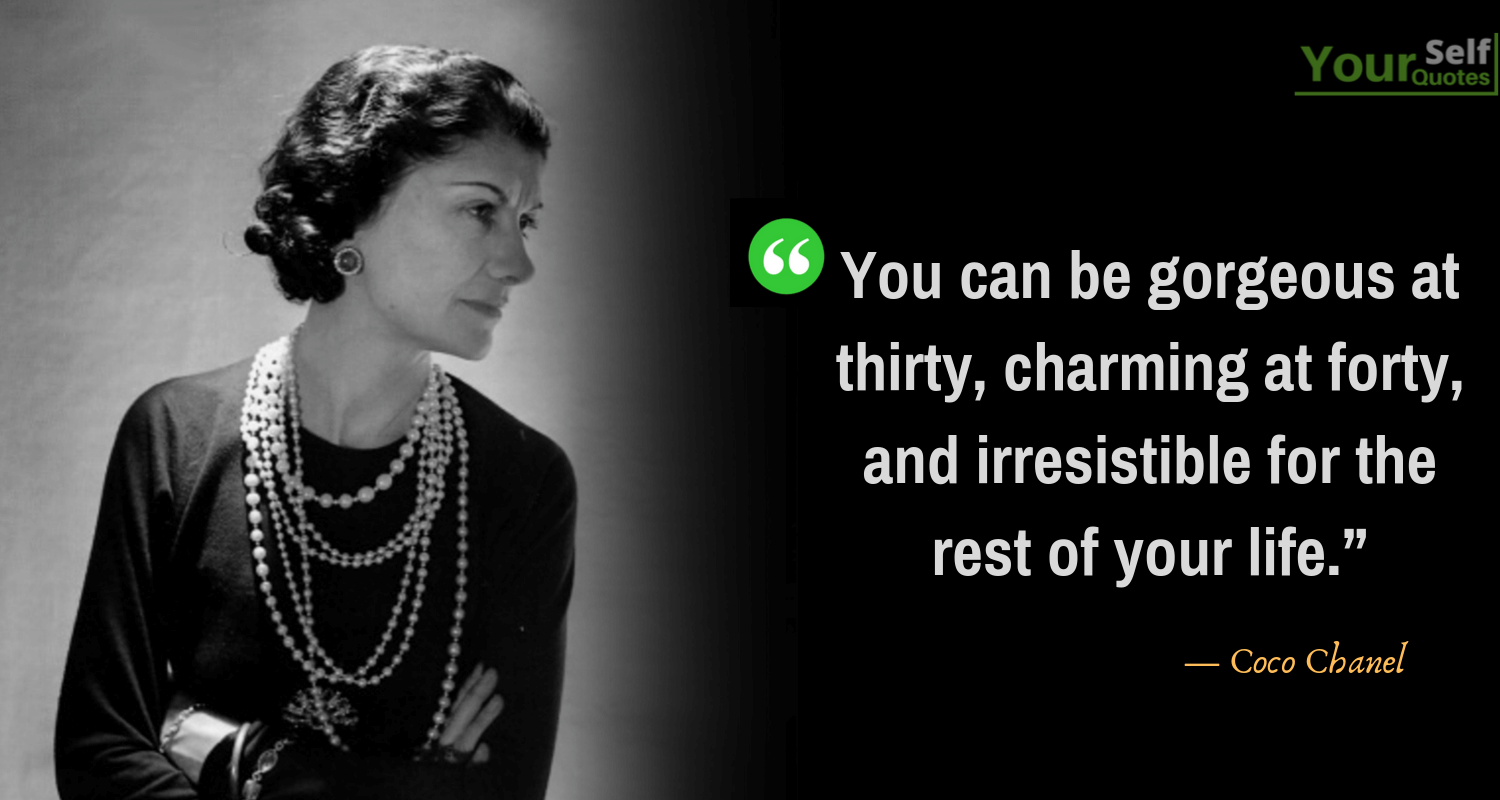 “Beauty begins the moment you decide to be yourself.” — Coco Chanel

Coco Chanel was a famous fashion designer. She was responsible for liberating women from the constraints of the “corseted silhouette” and popularizing a sporty, casual chic as the feminine standard of style. The lady was considered as a prolific fashion creator. She reached out from couture clothing and focused on her design aesthetic in jewelry, handbags, and fragrance.

Her signature scent, Chanel No. 5, has become an iconic product. She is one and only fashion designer who is listed on Time magazine’s list of the 100 most influential people of the 20th century. Chanel died at the age of 87 on 10th January 1971 in Paris France. The designer is still recognized and appreciated by people worldwide.

Hope you enjoyed reading about this charismatic fashion designer. If yes then do share these exciting Coco Chanel Quotes Images with your loved ones.

Related Topics:Quotes by Coco Chanel
Up Next

Robert Burns Quotes As A Pioneer of Romance