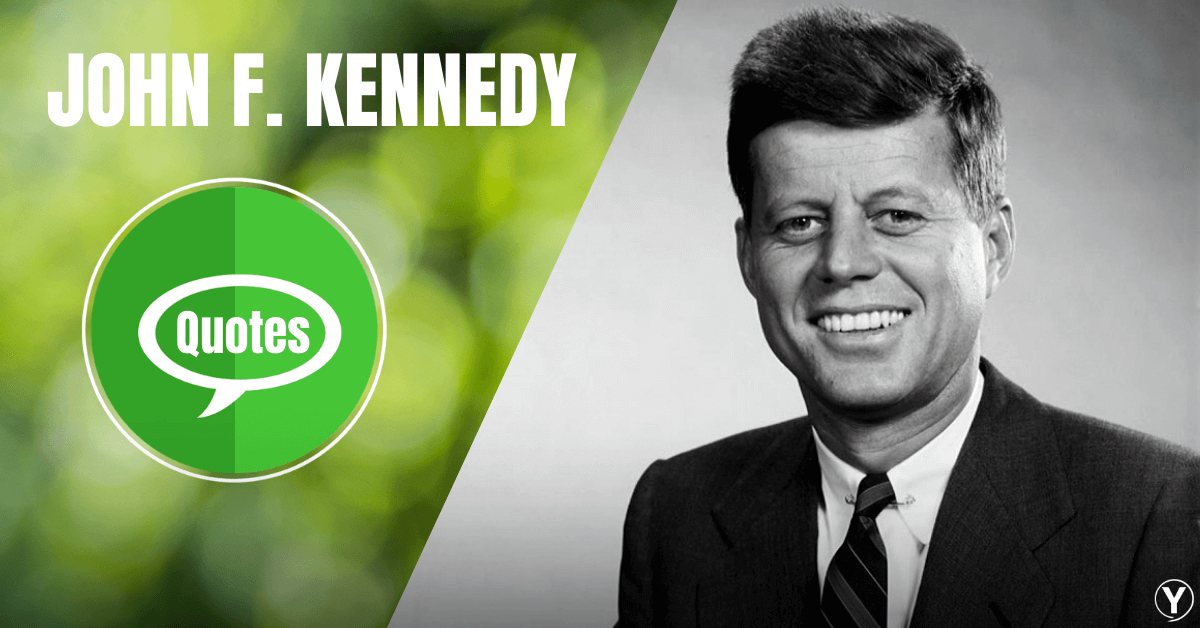 John F. Kennedy, full name John Fitzgerald “Jack” Kennedy was one of the famous American politicians. He served as the 35th President of the United States from January 1961 until his assassination in November 1963.

The politician was born on 29th May 1917 in Brookline, Massachusetts. Kennedy was born to  Joseph Patrick Kennedy, Sr, a businessman, and politician, and Rose Kennedy (née Fitzgerald), a philanthropist and socialite. He had an elder brother,  Joseph Jr., and seven younger siblings: Rosemary, Kathleen (“Kick”), Eunice, Patricia, Robert (“Bobby”), Jean, and Edward (“Ted”). John F. Kennedy lived in Brookline for the first ten years of his life. He was married to Jacqueline Lee “Jackie” Bouvier

Kennedy started his graduation from Harvard University and joined the U.S. Naval Reserve. He represented the 11th congressional district of Massachusetts in the U.S. House of Representatives from 1947 to 1953.  In the 1960 Presidential Election, Kennedy became the youngest person elected president at the age of 43. He defeated Republican opponent Richard Nixon. He was the 35th President of the U.S. On his becoming the president his speech reflected his confidence. I proved that his administration would chart a historically significant course in both domestic policy and foreign affairs.

Kennedy was indeed a very focused and determined personality. He keenly focused on immediate and specific issues facing the administration and quickly voiced his impatience with pondering deeper meanings. He was very much attentive and eager to change the policies for the betterment of his nation.

Let’s go through the most inspiring John F. Kennedy Quotes that will change your outlook for the good.

“Efforts and courage are not enough without purpose and direction.” —  John F. Kennedy 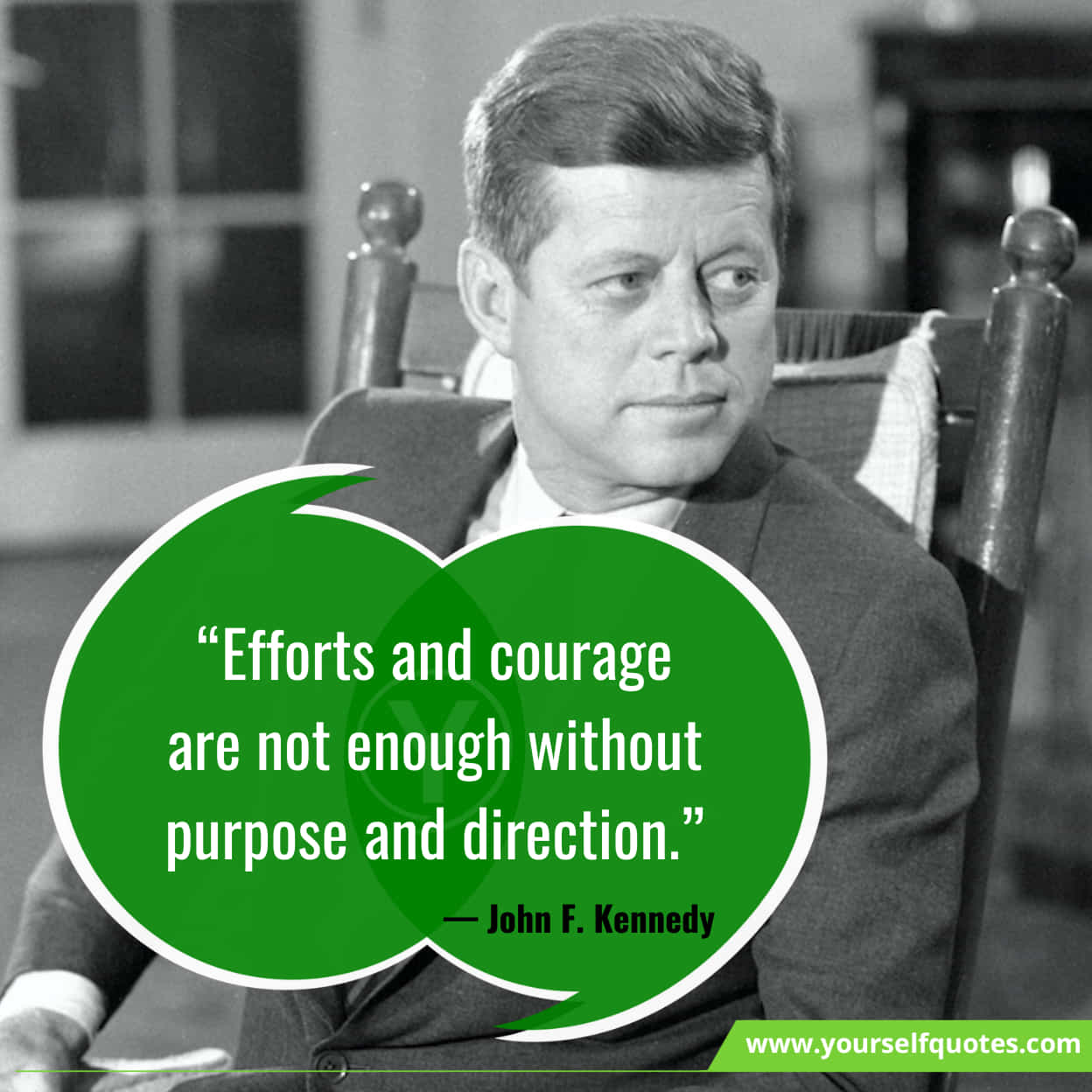 “Conformity is the jailer of freedom and the enemy of growth.” —  John F. Kennedy

“Victory has a hundred fathers, and defeat is an orphan.” —  John F. Kennedy

“Leadership and learning are indispensable to each other.” —  John F. Kennedy

“One person can make a difference, and everyone should try.” —  John F. Kennedy

“The time to repair the roof is when the sun is shining.” —  John F. Kennedy

“It is an unfortunate fact that we can secure peace only by preparing for war.” —  John F. Kennedy

“To further the appreciation of culture among all the people, to increase respect for the creative individual, to widen participation by all the processes and fulfillments of art – this is one of the fascinating challenges of these days” —  John F. Kennedy

“We must never forget that art is not a form of propaganda; it is a form of truth” —  John F. Kennedy

“My fellow Americans, let us take that first step. Let us…step back from the shadow of war and seek out the way of peace. And if that journey is a thousand miles, or even more, let history record that we, in this land, at this time, took the first step.” —  John F. Kennedy

“A man may die, nations may rise and fall, but an idea lives on.” —  John F. Kennedy 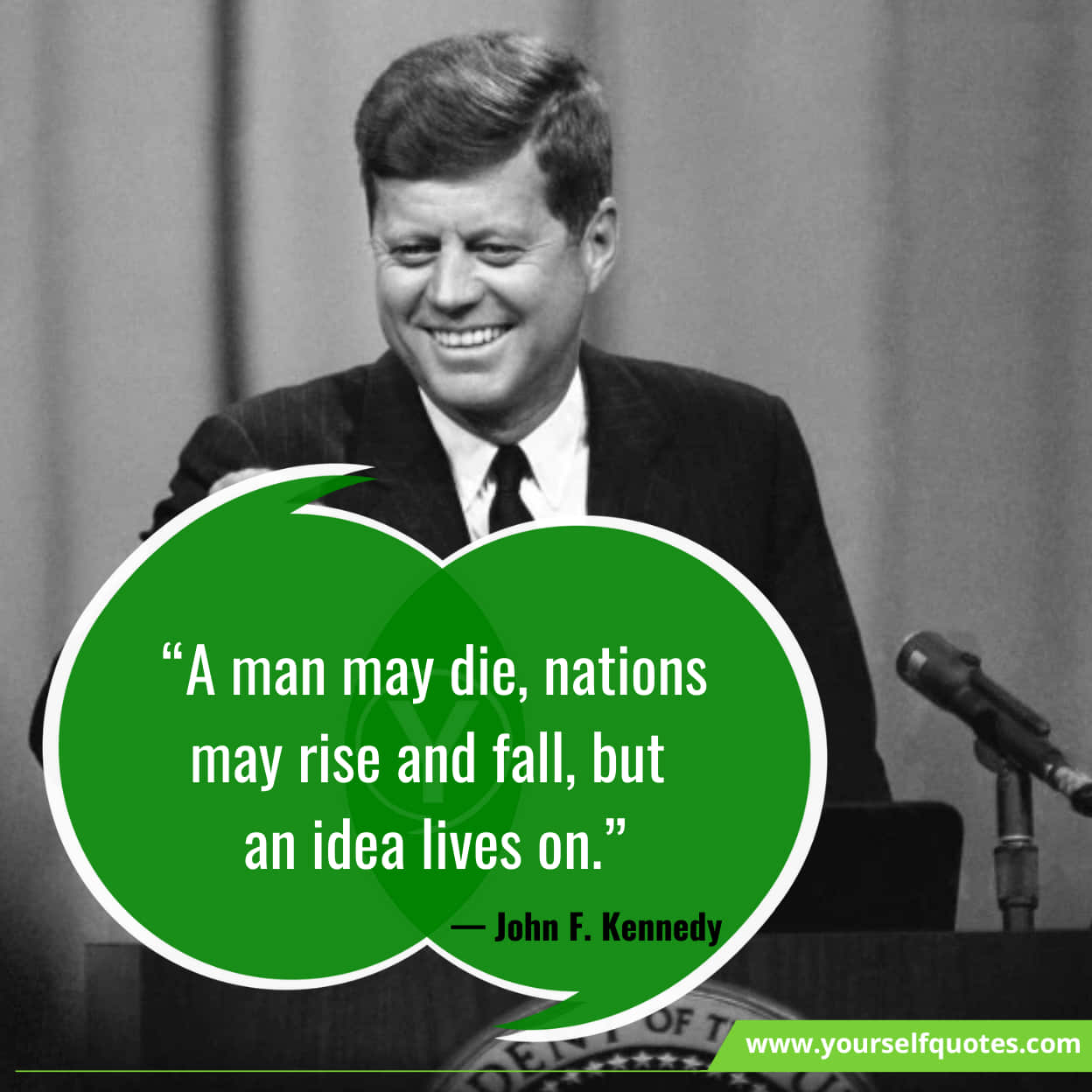 “Those who dare to fail miserably can achieve greatly.” —  John F. Kennedy

“War will exist until that distant day when the conscientious objector enjoys the same reputation and prestige that the warrior does today.” —  John F. Kennedy

“The great enemy of the truth is very often not the lie, deliberate, contrived and dishonest, but the myth, persistent, persuasive and unrealistic.” —  John F. Kennedy

“If art is to nourish the roots of our culture, society must set the artist free to follow his vision wherever it takes him.” —  John F. Kennedy

“The human mind is our fundamental resource.” —  John F. Kennedy 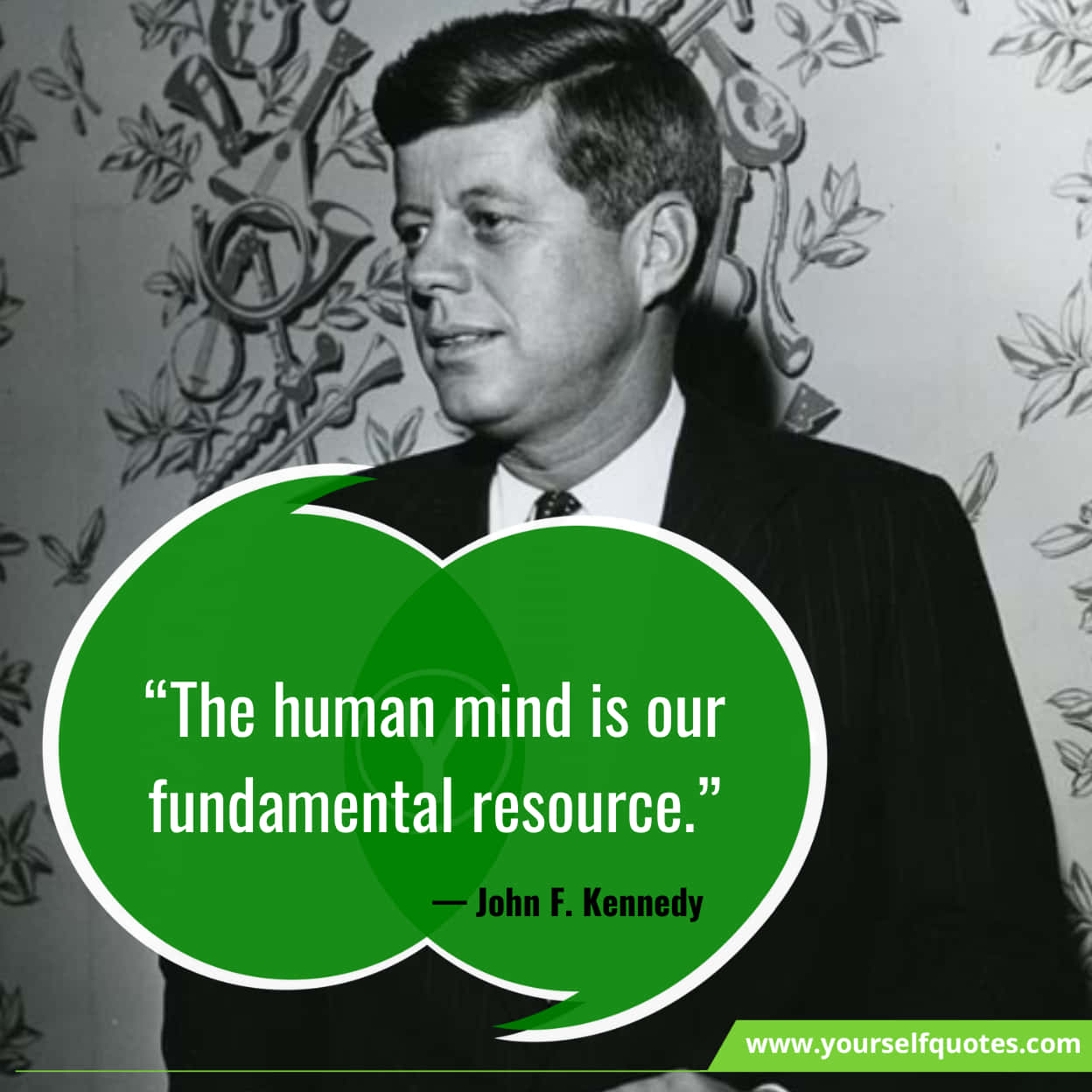 “Books and libraries and the will to use them are among the most important tools our nation has to diffuse knowledge and to develop our powers of creative wisdom.” —  John F. Kennedy

“I am sorry to say that there is too much point to the wisecrack that life is extinct on other planets because their scientists were more advanced than ours.” —  John F. Kennedy

“We must find time to stop and thank the people who make a difference in our lives.” —  John F. Kennedy

“Let both sides seek to invoke the wonders of science instead of its terrors. Together let us explore the stars, conquer the deserts, eradicate disease, tap the ocean depths, and encourage the arts and commerce.” —  John F. Kennedy

“Every accomplishment starts with the decision to try.” —  John F. Kennedy 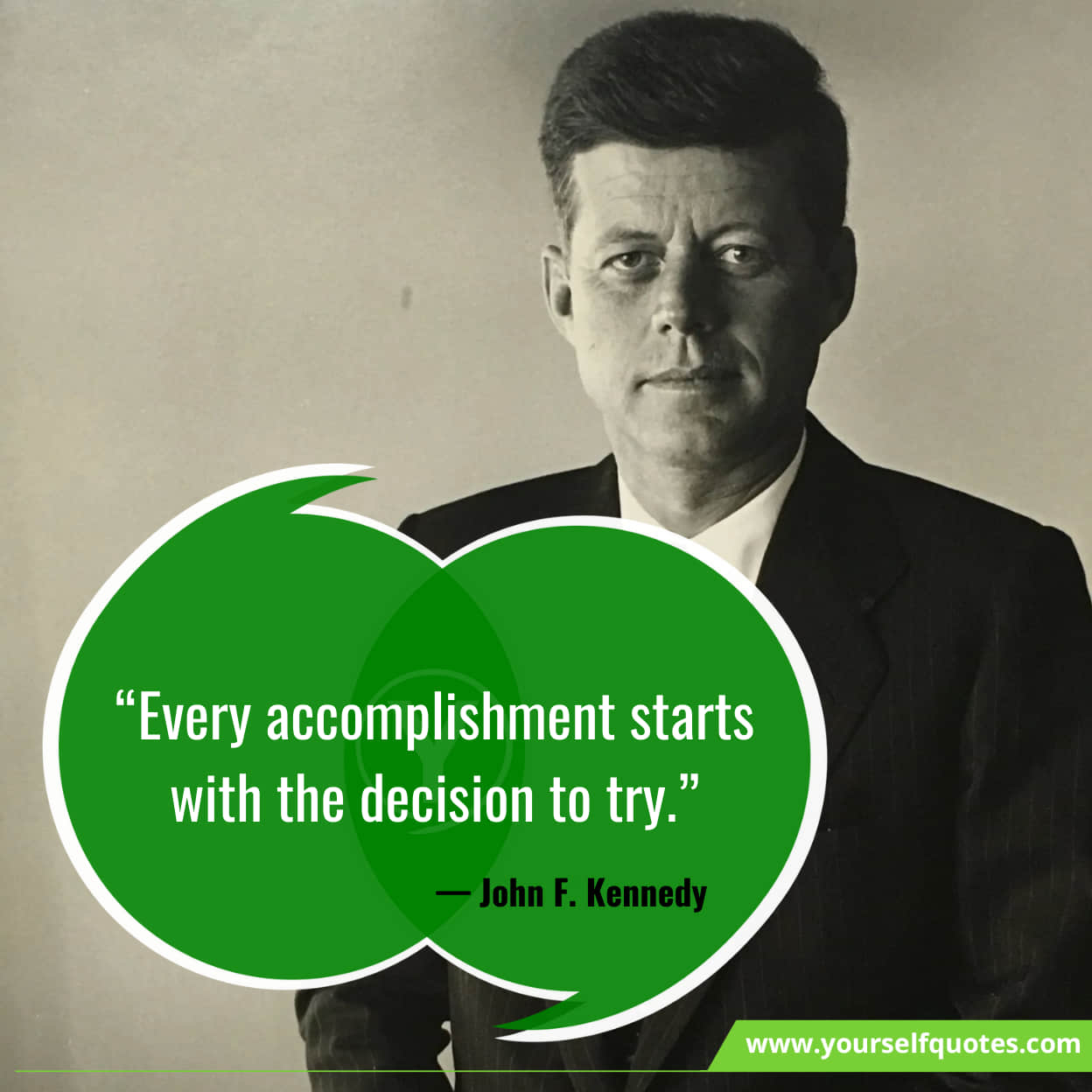 “If we cannot now end our differences, at least we can help make the world safe for diversity.” —  John F. Kennedy

“The ignorance of one voter in a democracy impairs the security of all.” —  John F. Kennedy 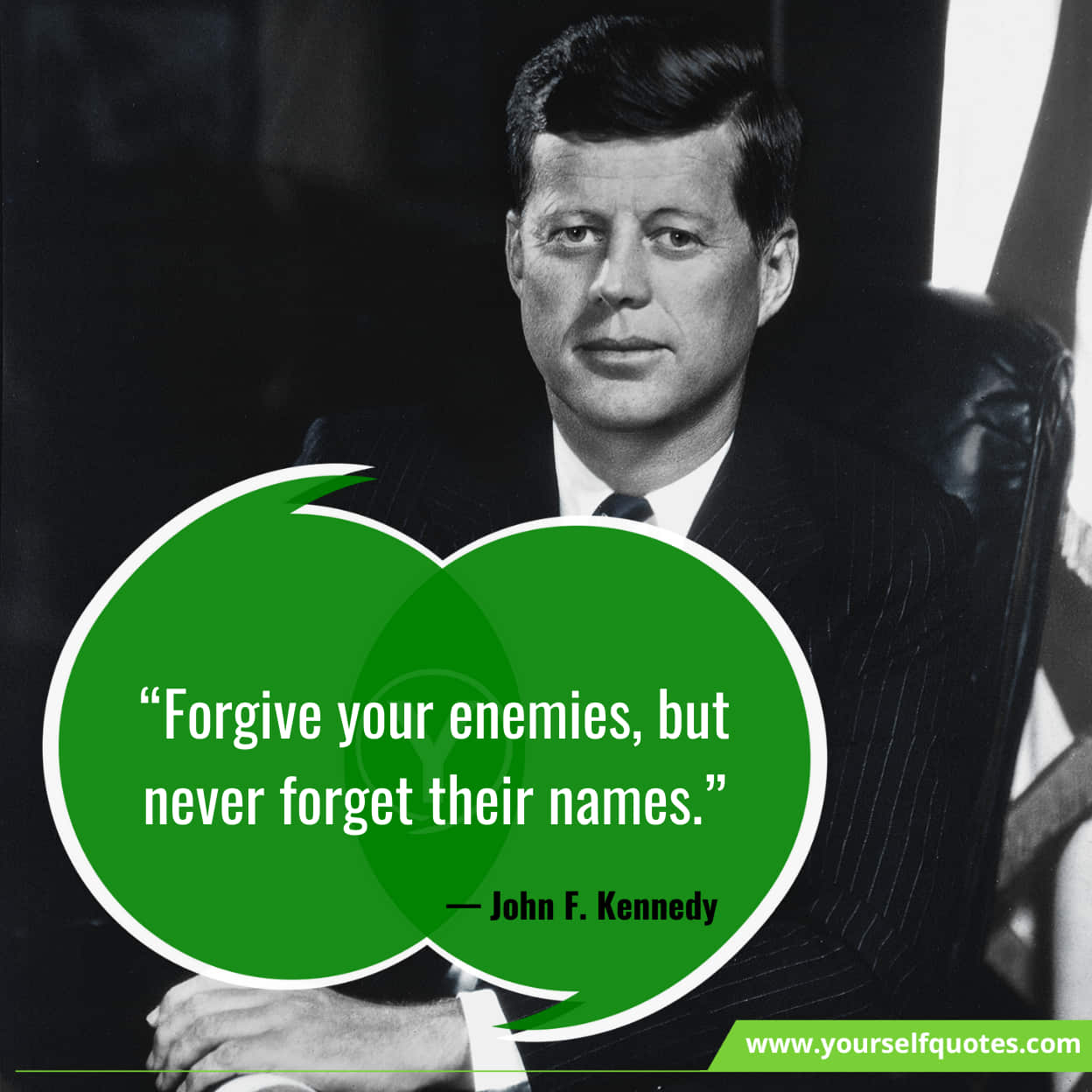 “Do not pray for easy lives, pray to be stronger men.” —  John F. Kennedy

“Too often we enjoy the comfort of opinion without the discomfort of thought.” —  John F. Kennedy

“We have the power to make this the best generation of mankind in the history of the world, or make it the last.” —  John F. Kennedy

“The greater our knowledge increases, the more our ignorance unfolds.” —  John F. Kennedy

John F. Kennedy was often referred to by his initials JFK. He was one of the famous 35th presidents of the United States. He was assassinated on 22nd November 1963 at 12.30 p.m. in Dallas, Texas. At the time of the assassination, he was riding in a Presidential motorcade. Vice President Lyndon Johnson assumed the presidency upon his death.

Kennedy was a life member of the National Rifle Association. He came in third in Gallup’s List of Widely Admired People of the 20th century. He was closely bound to popular culture emphasized by songs such as “Twisting at the White House”. Vaughn Meader’s First Family comedy album, which parodied the president, the first lady, their family, and the administration, sold about four million copies

Are you amazed by knowing about this historical politician? If yes, then do share these inspiring John F. Kennedy Quotes Images with your family, friends, and dear ones.