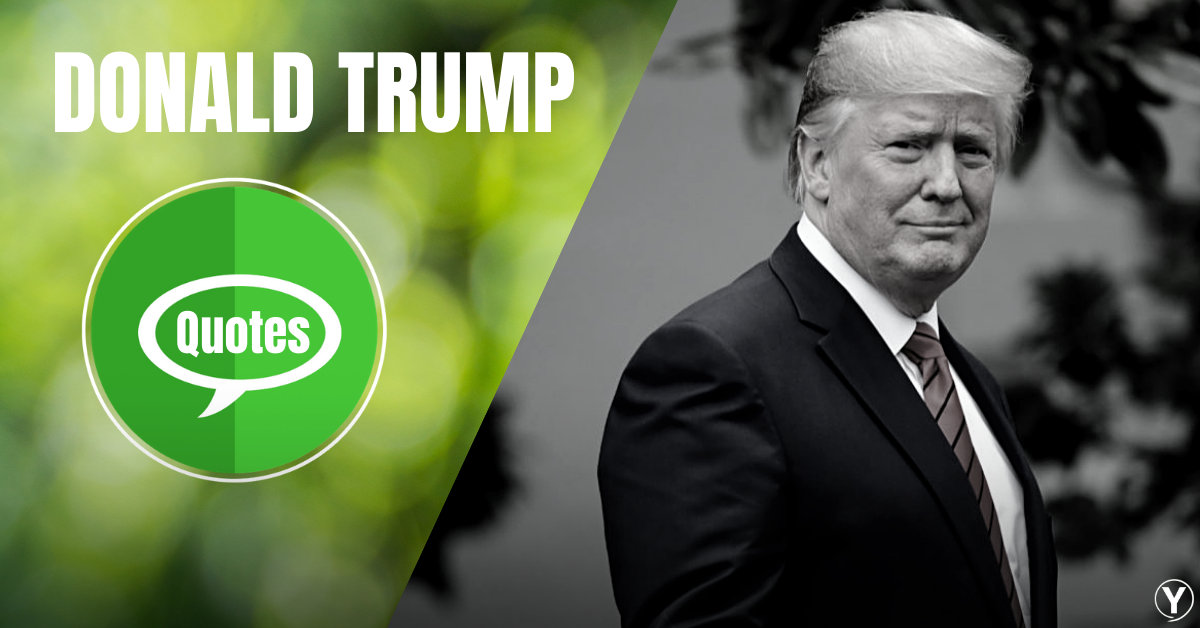 The 45th & the current President of the United States is Donald Trump. He is one of the best-known and most controversial businessmen of the 1980s and 1990s. He is a well-known American businessman and real estate, developer.

Donald Trump was born on 14th June 1946 in Queens, New York City, and the fourth of five children of Mr. Frederick C. and Mrs. Mary Macleod Trump. His father Frederick Trump was a builder and real estate developer.

Donald Trump was a bright student from the beginning and was very energetic. At the age of 13, his parents sent him to the New York Military Academy. Finally, he graduated in 1964.

He further studied at Fordham University and then at Wharton School of Finance at the University of Pennsylvania, from where he graduated in 1968 with a degree in economics.

He also produced and hosted the reality television series, “The Apprentice (2004)”, which has been nominated for 9 Primetime Emmy Awards.

From 1971, he was chairman of his family’s real estate company, Elizabeth Trump & Son (The Trump Organization), which was founded in 1923 by his grandparents. His business focused on building or renovating office towers, casinos, hotels, and golf courses.

Donald Trump entered the Presidential Race in 2016 as a Republican and defeated 16 opponents. Trump was elected president in a surprise victory over Democratic nominee Hillary Clinton.

Trump has signaled his intention to run for a second term, in the 2020 Presidential campaign.

“Without passion, you don’t have energy, without energy you have nothing.” — Donald Trump 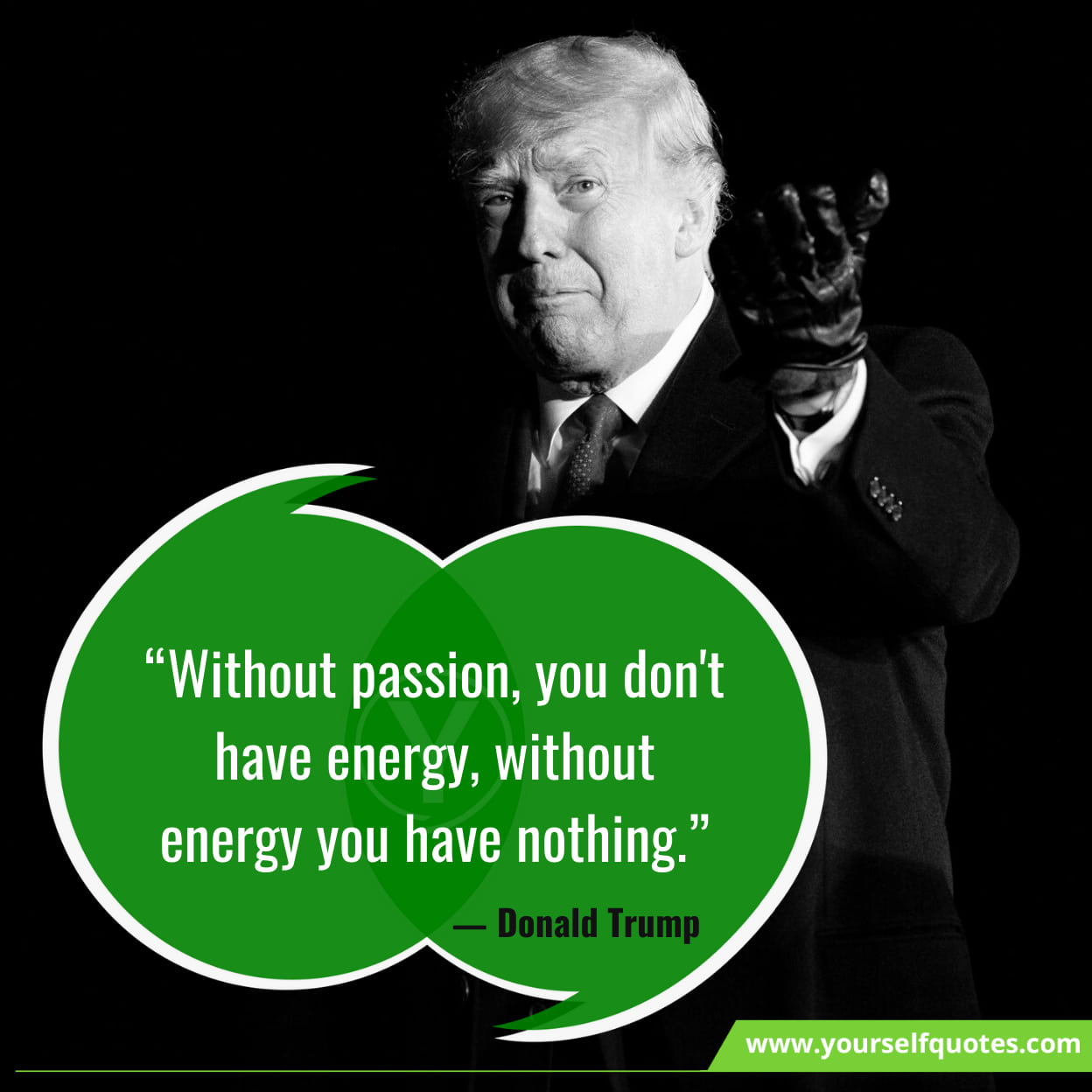 “I truly love all people and wish everyone happiness and well-being.” – Donald Trump

“The harder I work, the luckier I get. When you have momentum going, play the momentum.” – Donald Trump

“If you can’t tell he’s a conman, congratulations, you’re the mark.” – Donald Trump

“No dream is too big. No challenge is too great. Nothing we want for our future is beyond our reach.” – Donald Trump

“We – we need strength, we need energy, we need quickness and we need the brain in this country to turn it around.” – Donald Trump

“If you’re interested in ‘balancing’ work and pleasure, stop trying to balance them. Instead, make your work more pleasurable.”

“I will fight for you with every breath in my body – and I will never, ever let you down.” – Donald Trump

“I’ve always won, and I’m going to continue to win. And that’s the way it is.” – Donald Trump

“Success comes from failure, not from memorizing the right answers.” ― Donald Trump 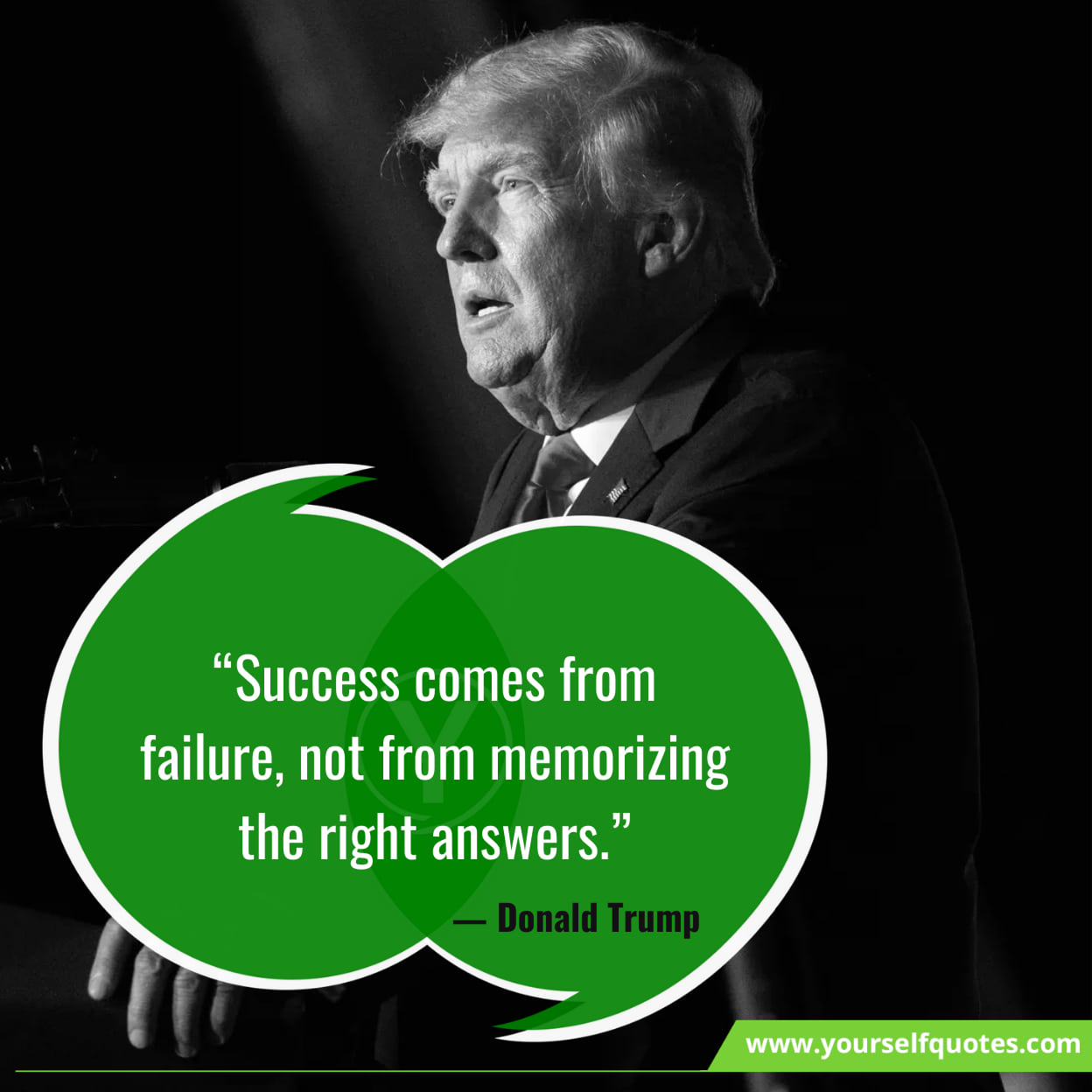 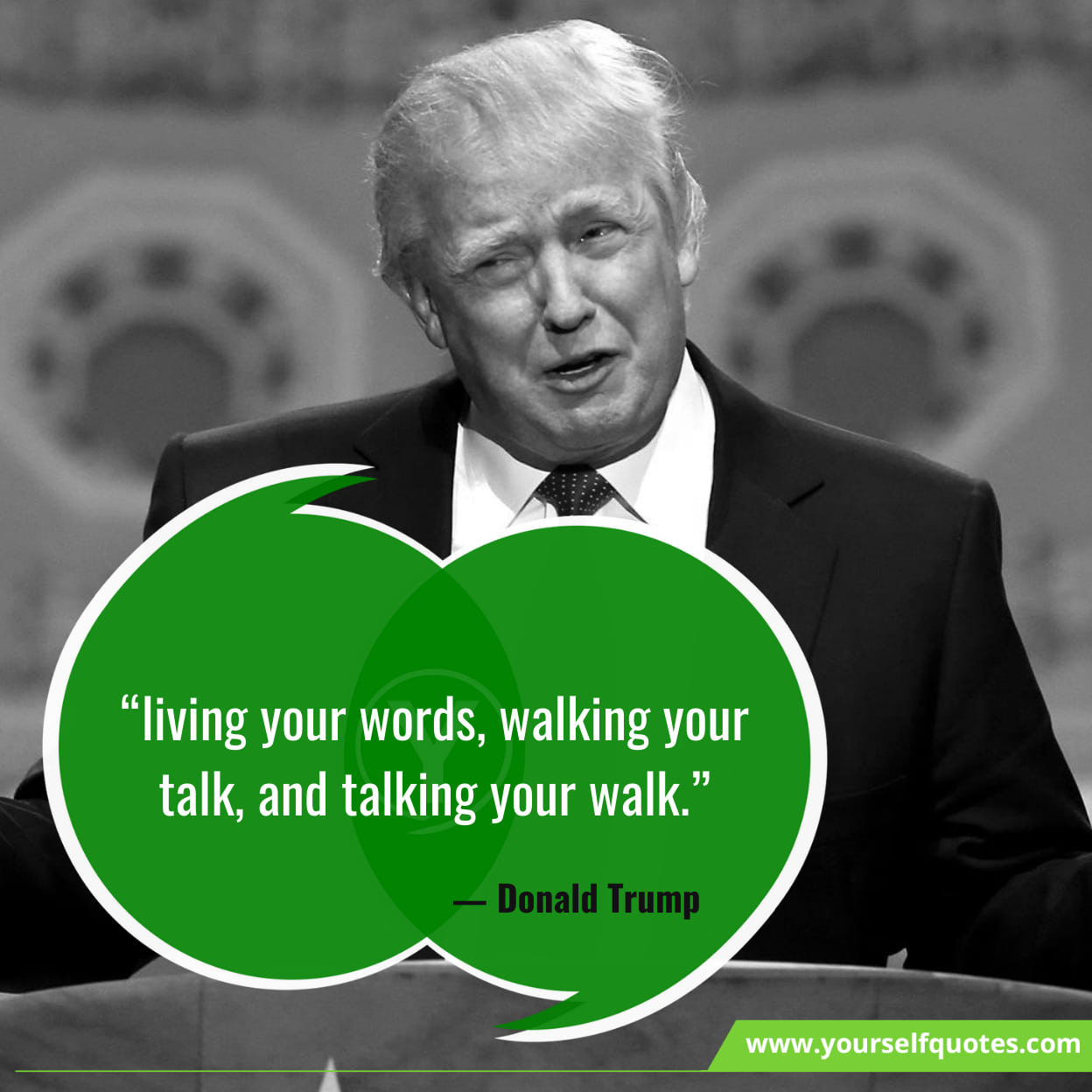 “Our country, our people, and our laws have to be our top priority.” ― Donald J. Trump

“My motto is: Always get even. When somebody screws you, screw them back in spades.” ― Donald Trump

“It’s a blip, not a catastrophe.” ― Donald Trump

“Courage is not the absence of fear, Courage is the ability to act effectively, in spite of fear.” ― Donald Trump

“The point is that if you are a little different or a little outrageous, or if you do things that are bold or controversial, the press is going to write about you.” ― Donald Trump

“because much more often than you’d think, sheer persistence is the difference between success and failure. In” ― Donald J. Trump

“Building a brand may be more important than building a business.” ― Donald Trump 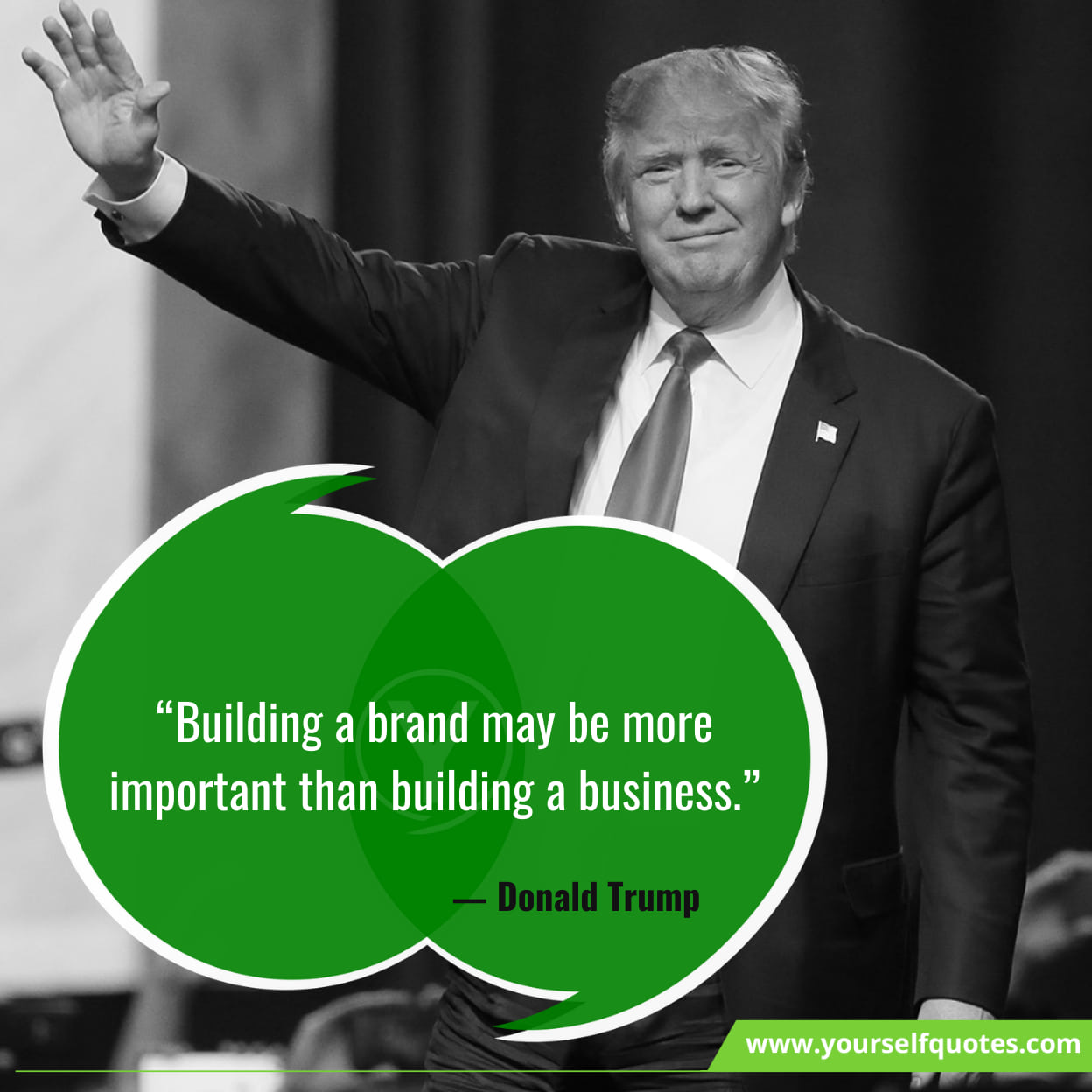 “Partnerships must have loyalty and integrity at their core.” ― Donald Trump

“Money was never a big motivation for me, except as a way to keep score. The real excitement is playing the game.” ― Donald J. Trump

“Think BIG! You are going to be thinking anyway, so think BIG!” ― Donald Trump

“Most people think small because they are afraid of success, afraid of making decisions, afraid of winning.” ― Donald Trump

“The most important thing in life is to love what you’re doing because that’s the only way you’ll ever be really good at it.” ― Donald J. Trump

“Rules are meant to be broken.” ― Donald Trump

“All of the women on The Apprentice flirted with me – consciously or unconsciously. That’s good to be expected.” ― Donald Trump

“As long as you are going to be thinking anyway, think big.” ― Donald Trump 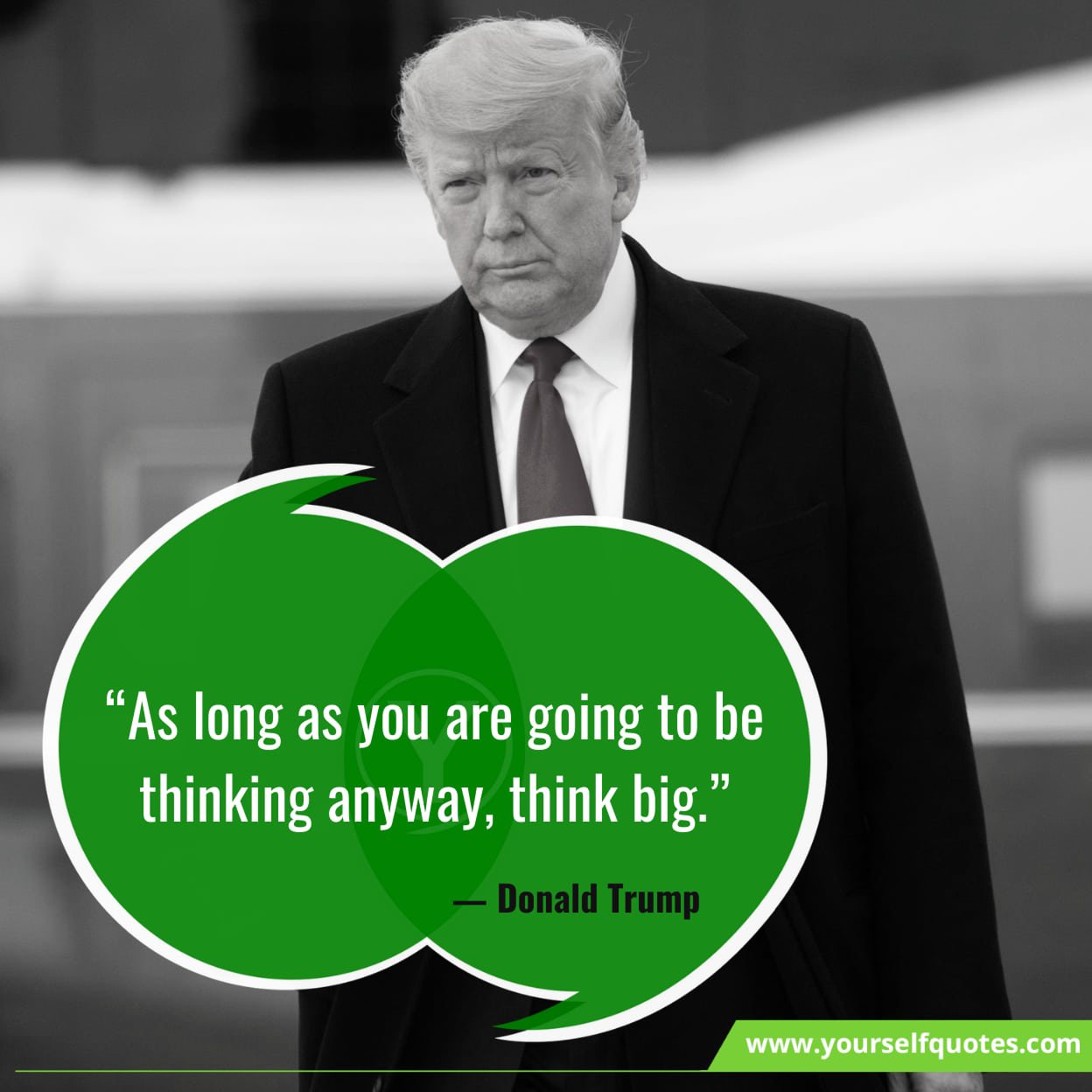 “Show me someone without an ego, and I’ll show you a loser.” ― Donald Trump

“When you are wronged repeatedly, the worst thing you can do is continue taking it–fight back! ” ― Donald Trump

“What separates the winners from the losers is how a person reacts to each new twist of fate.” ― Donald Trump

“It doesn`t hurt to get more education.” ― Donald Trump

“Sometimes your best investments are the ones you don’t make.” ― Donald Trump

“What’s the point of having great knowledge and keeping them all to yourself?” ― Donald J. Trump

“Anyone who thinks my story is anywhere near over is sadly mistaken.” ― Donald Trump

“I’ve read hundreds of books about China over the decades. I know the Chinese. I’ve made a lot of money with the Chinese. I understand the Chinese mind.” ― Donald Trump

“I try to learn from the past, but I plan for the future by focusing exclusively on the present. That’s where the fun is.” ― Donald Trump

“When somebody challenges you, fight back. Be brutal, be tough.” – Donald Trump 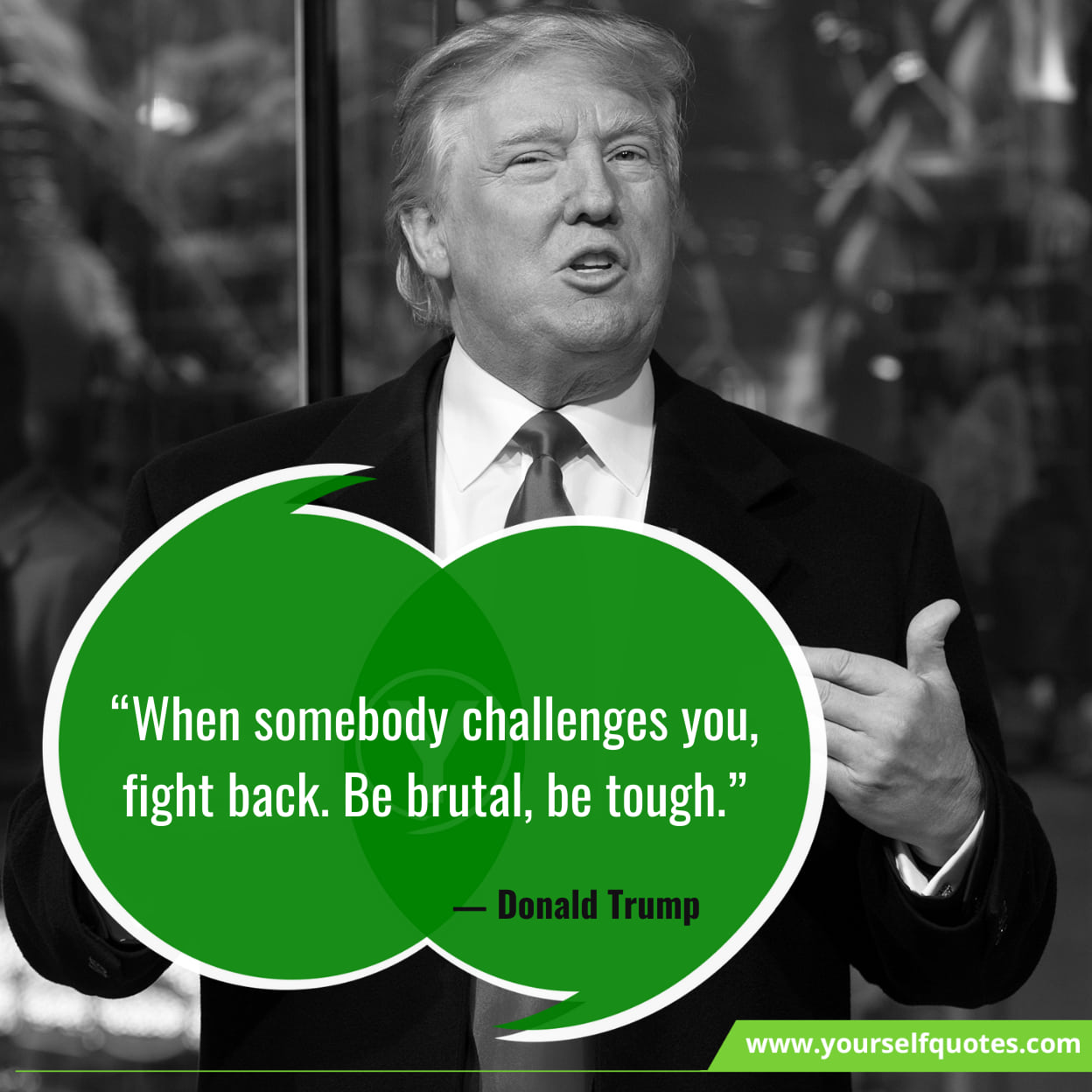 “What separates the winners from the losers is how a person reacts to each new twist of fate.” – Donald Trump 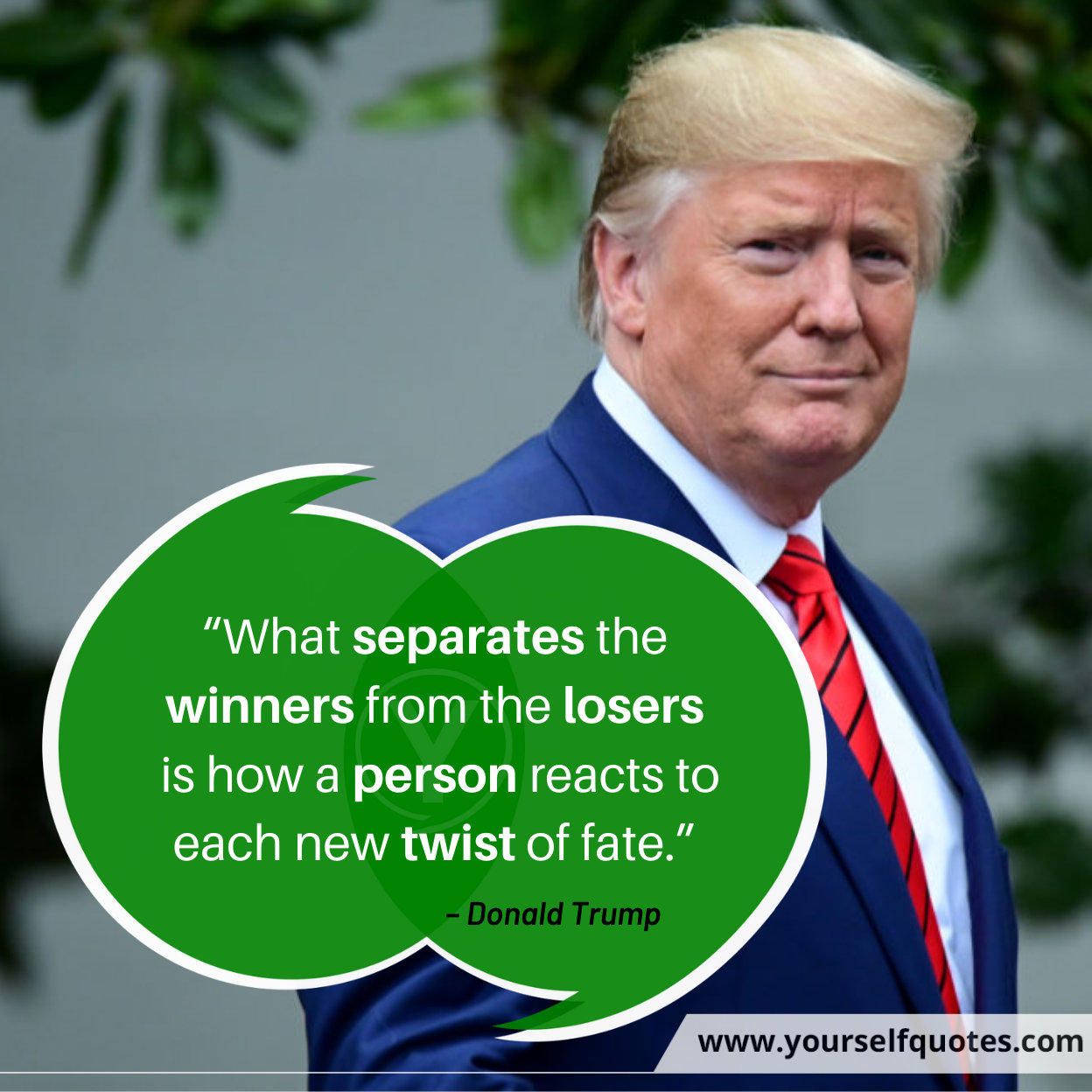 Mr. President Donald Trump won a historic victory in 2016 America’s Presidential Election. His personality speaks millions of words about his dedication and determination. He emerged as an American entrepreneur, businessman, and successful TV Personality. His words proved to the world no matter what, he walks in the tide toward success. His victory and success in spite of conflicts is an inspiration and motivation for millions of people. His words take us to the close insight of his mind.

Now it’s your turn to share out these amazing inspirational Quotes by Donald Trump with your family & friends.

Which are your favorite Donald Trump Quotes? Leave a comment below.

Dream Quotes To Make You Believe in Your Dreams

Most Popular Motivational Quotes That will Change Your Life