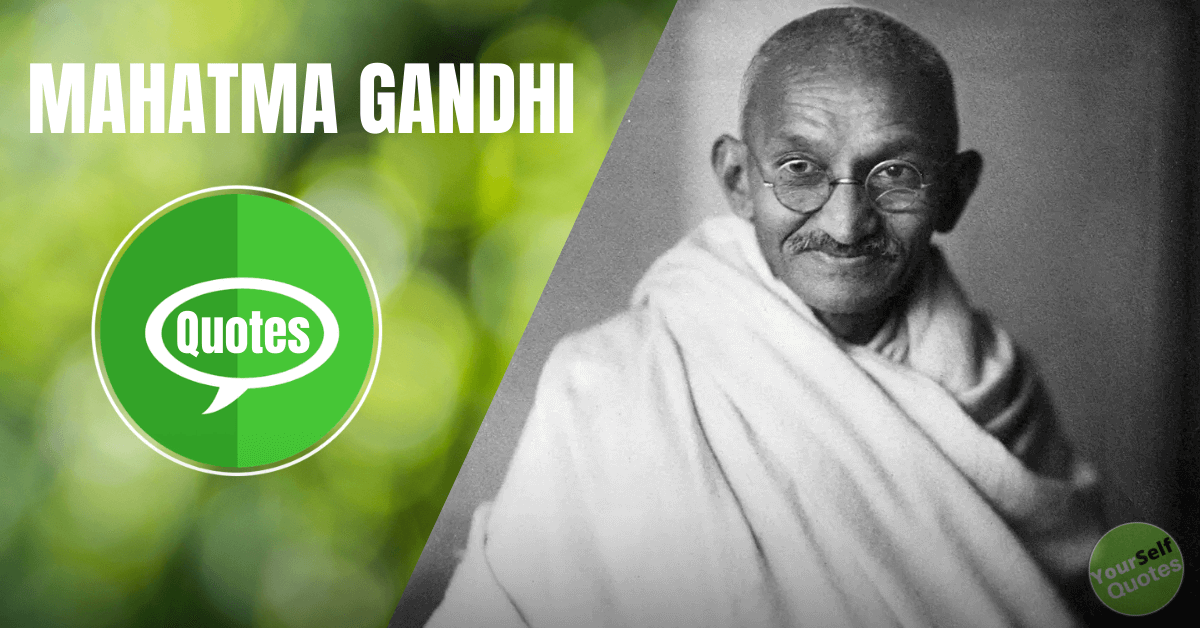 Looking for real inspirational words to change your thinking in today’s era? Want to follow the path of non-violence & peace? Then have look at the most persuasive Mahatma Gandhi Quotes to uplift your thoughts.

Father of the nation, Bapu, Mahatma Gandhi is still alive in our hearts because of his great sacrifices & his efforts to make India free from the rule of Britishers.  He was a man of peaceful words, a man with strong determination & will power. Mahatma Gandhi urged us to think beyond what could actually happen & this changed our think set.

Mohandas Karamchand Gandhi, well known as Mahatma Gandhi took birth on the patriotic land of Porbandar, India on 2nd October 1869. His father Karamchand Gandhi was the Dewan of Porbandar, and mother Putlibai was completely dissolved in religion & spirituality. He was married to Kasturba Gandhi at the age of 13. Gandhi Ji learned the skills of tolerance & non-violence at a very young age and followed them throughout his life. 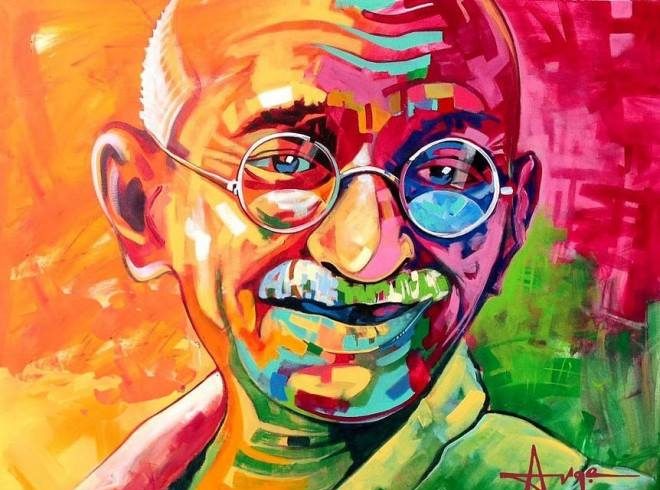 Mahatma Gandhi studied Law in Bombay & then graduated from University College London in 1891. He was a great follower of “Civil Disobedience” and always practiced the policy of truth in his life. He started the “Satyagraha” movement, the salt march to Dandi, where he walked barefoot to the ocean In protest against the British salt monopoly & salt tax.

His foremost aim was to improve the lives of untouchables, whom he called Harijans. He always stood up for equitable rights, including the right to vote in the same electorates as other castes.

“You must be the change you wish to see in the world.” — Mahatma Gandhi

“You may never know what results come of your actions, but if you do nothing, there will be no results.” — Mahatma Gandhi 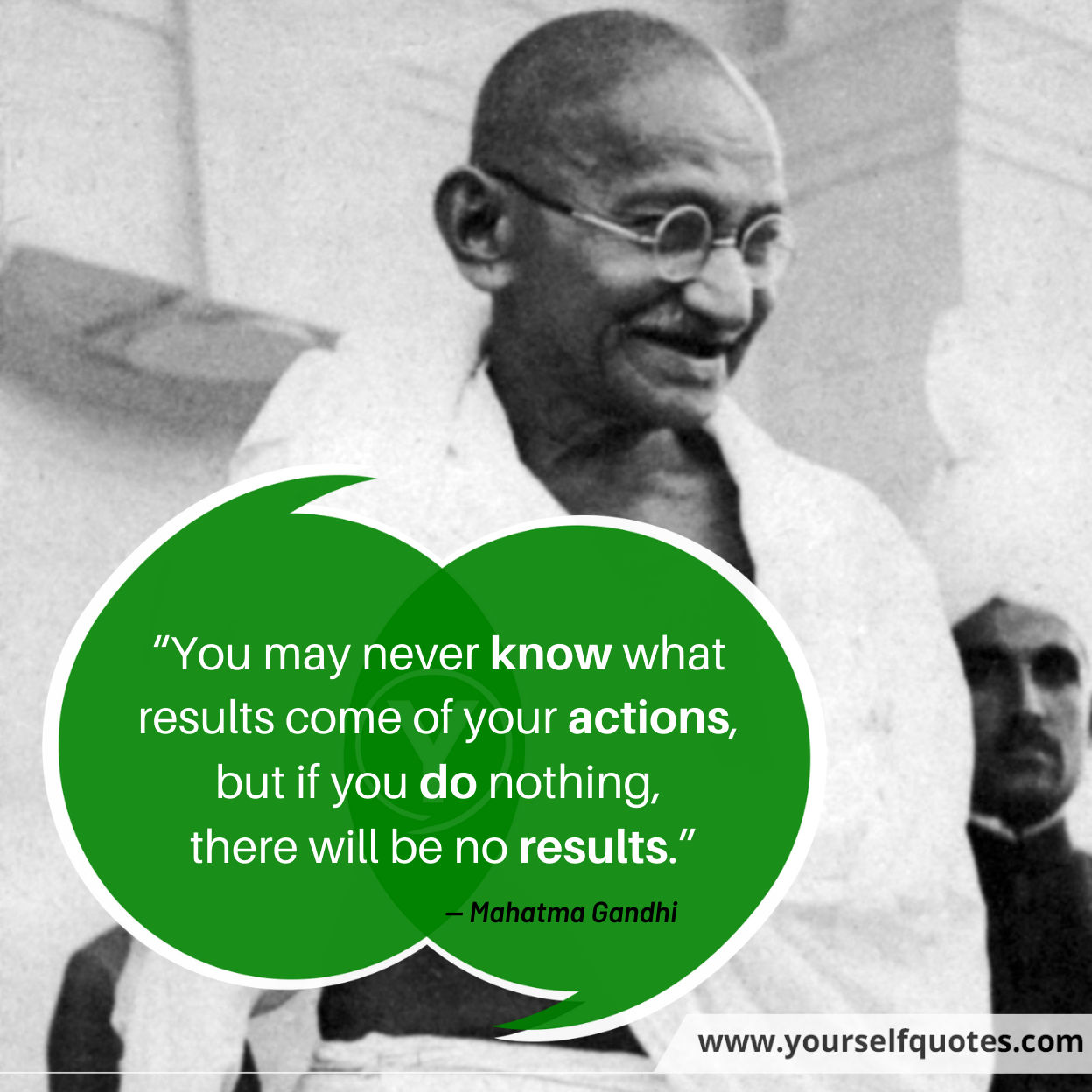 “When I admire the wonders of a sunset or the beauty of the moon, my soul expands in the worship of the creator.” — Mahatma Gandhi

“The best way to find yourself is to lose yourself in the service of others.” – Mahatma Gandhi 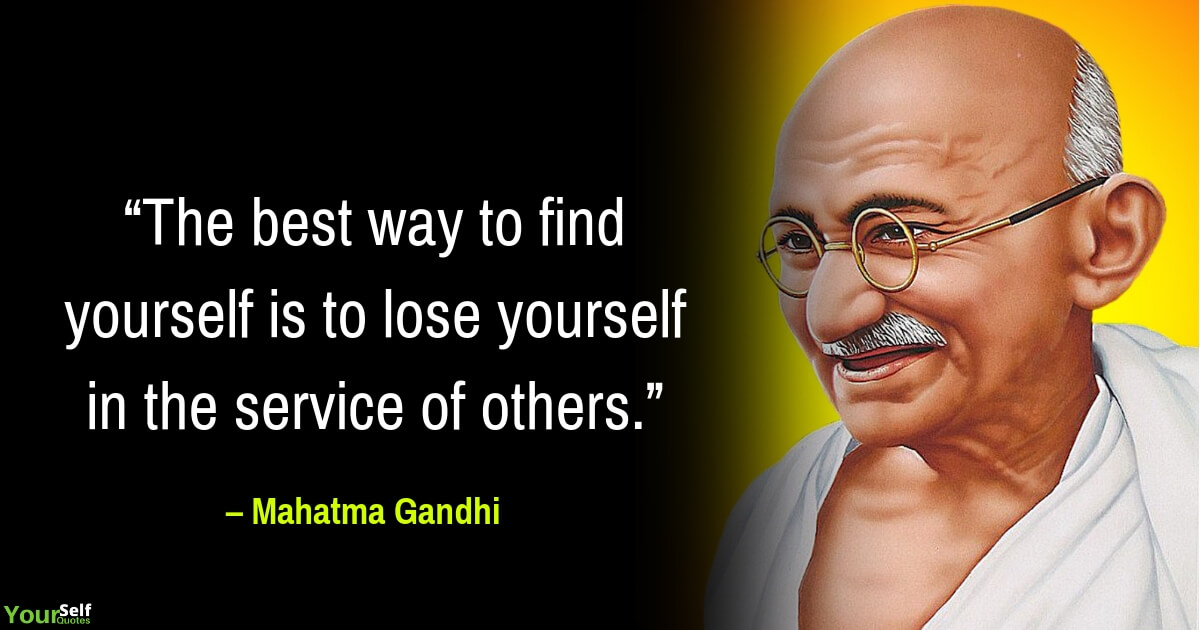 “Truth is by nature self-evident. As soon as you remove the cobwebs of ignorance that surround it, it shines clear.” — Mahatma Gandhi

“The day the power of love overrules the love of power, the world will know peace.” – Mahatma Gandhi

“Nobody can hurt me without my permission.” – Mahatma Gandhi 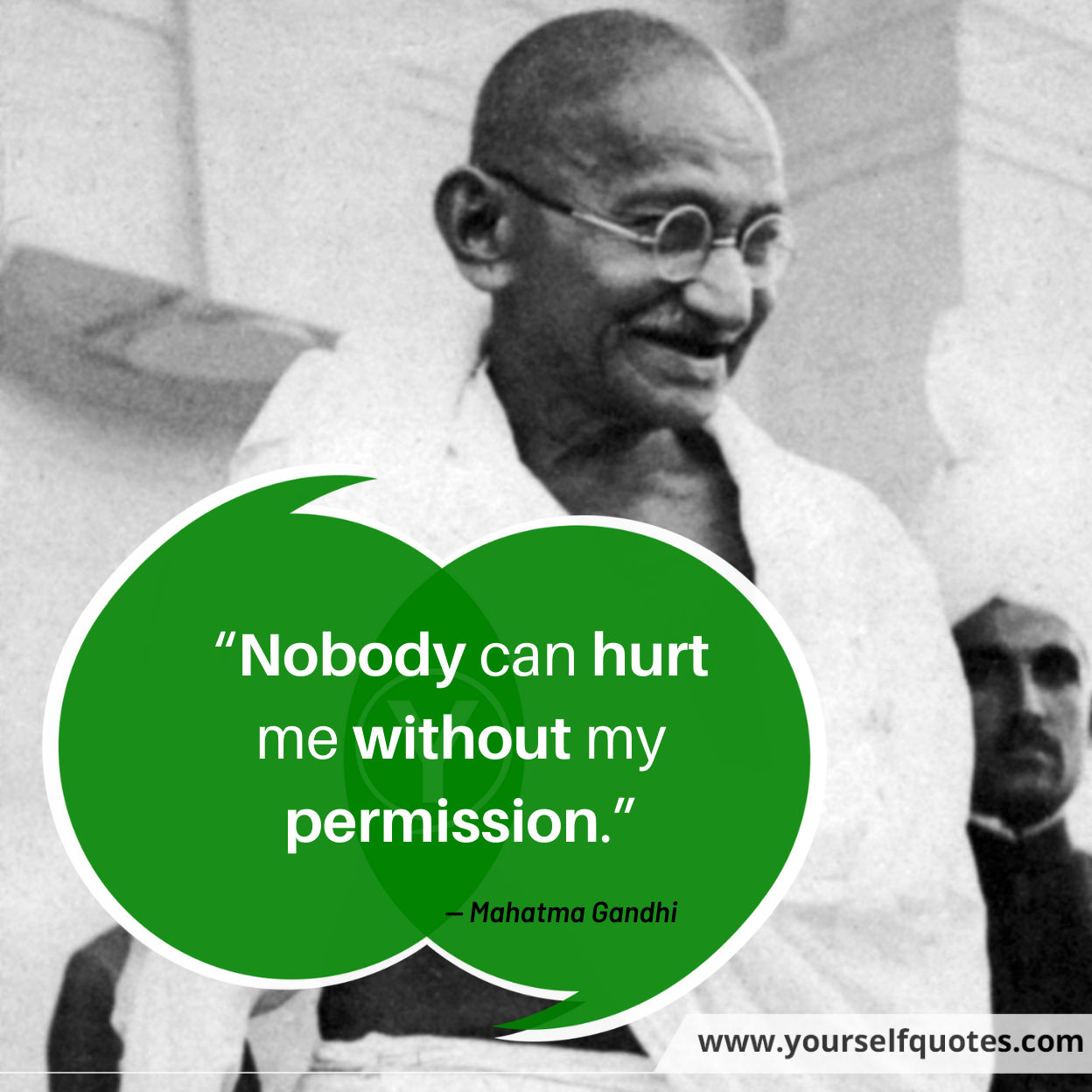 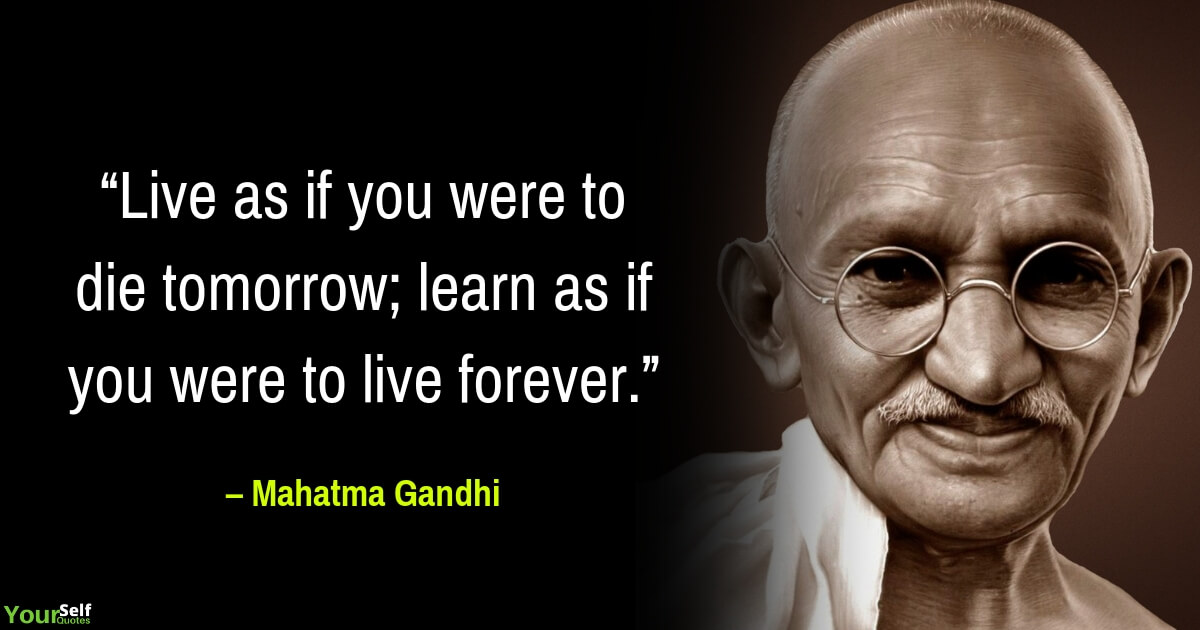 “There are two days in the year that we can not do anything, yesterday and tomorrow.” – Mahatma Gandhi 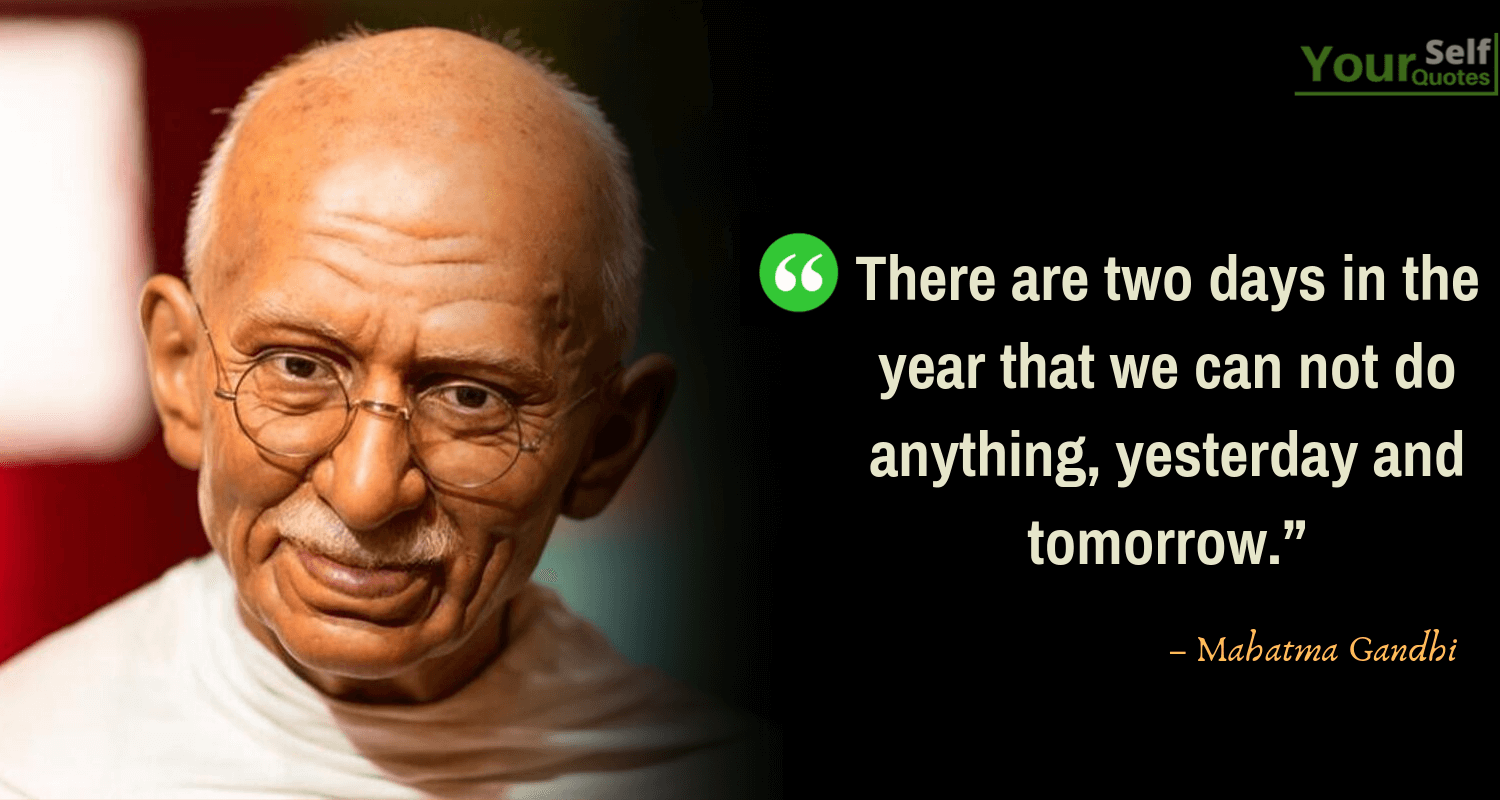 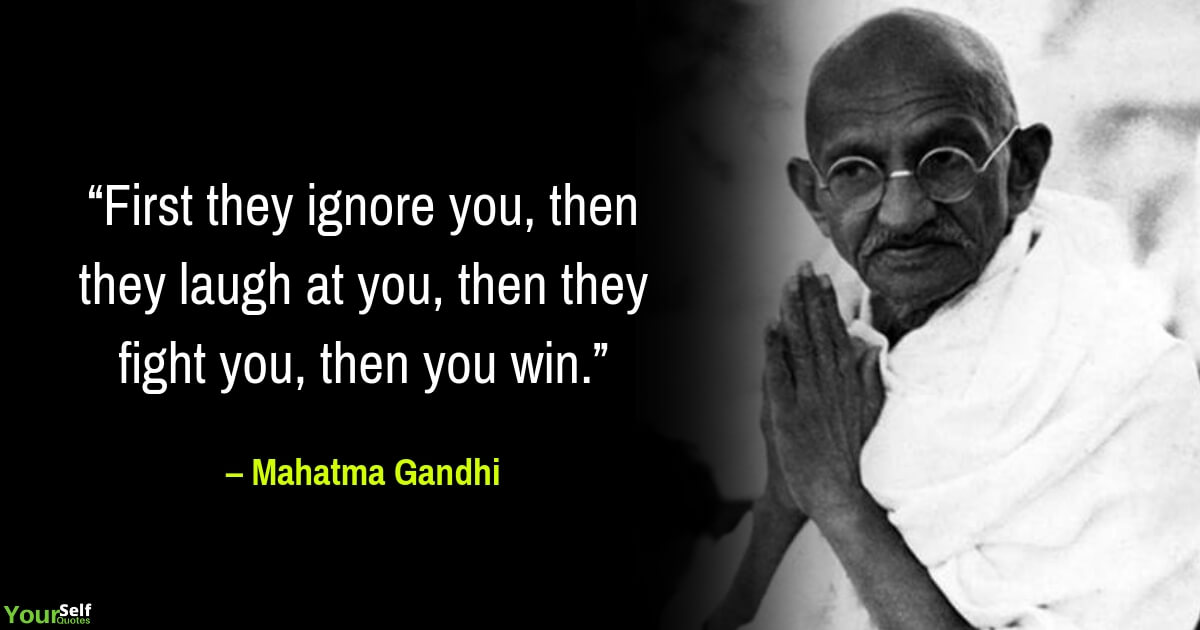 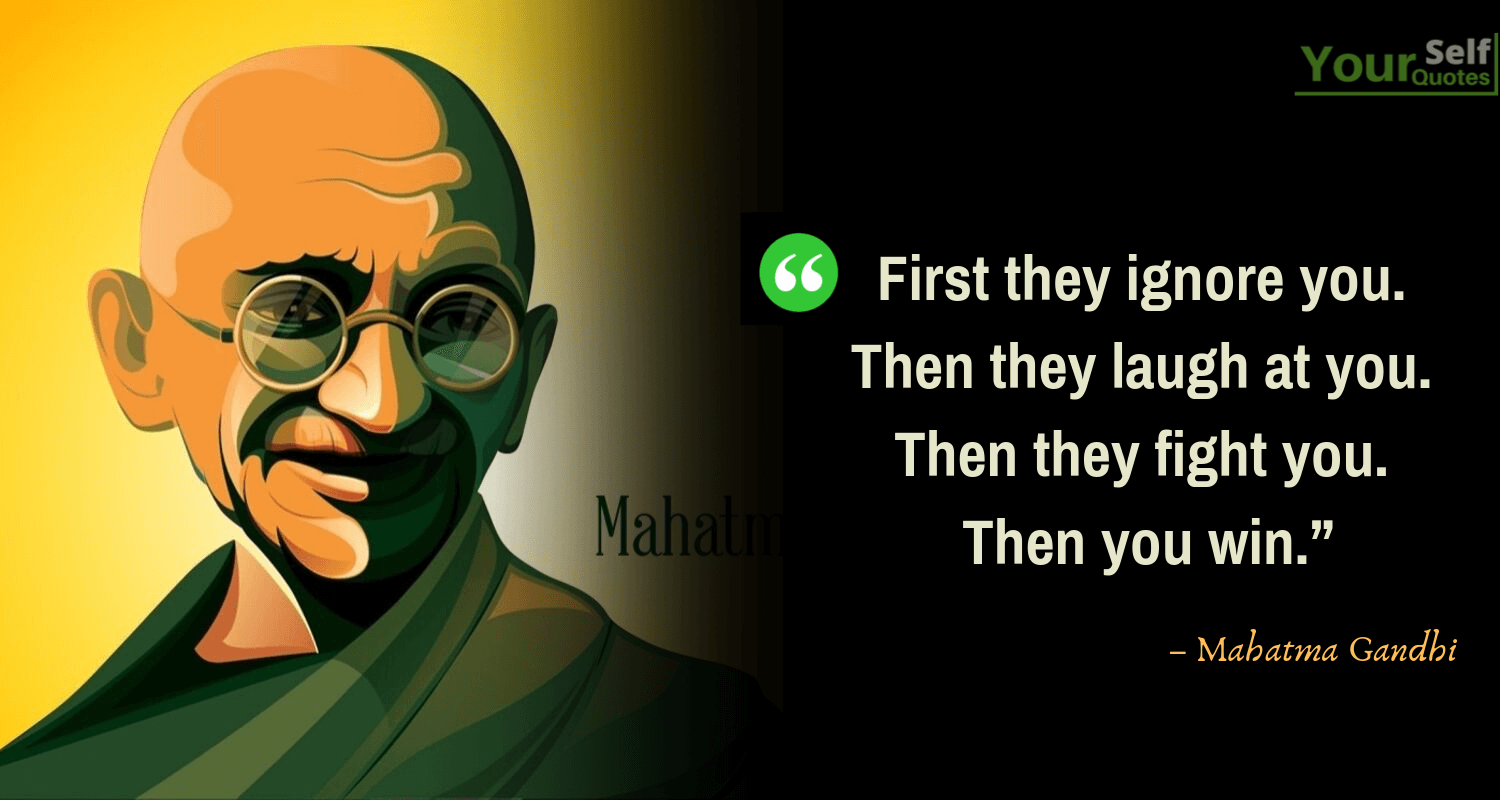 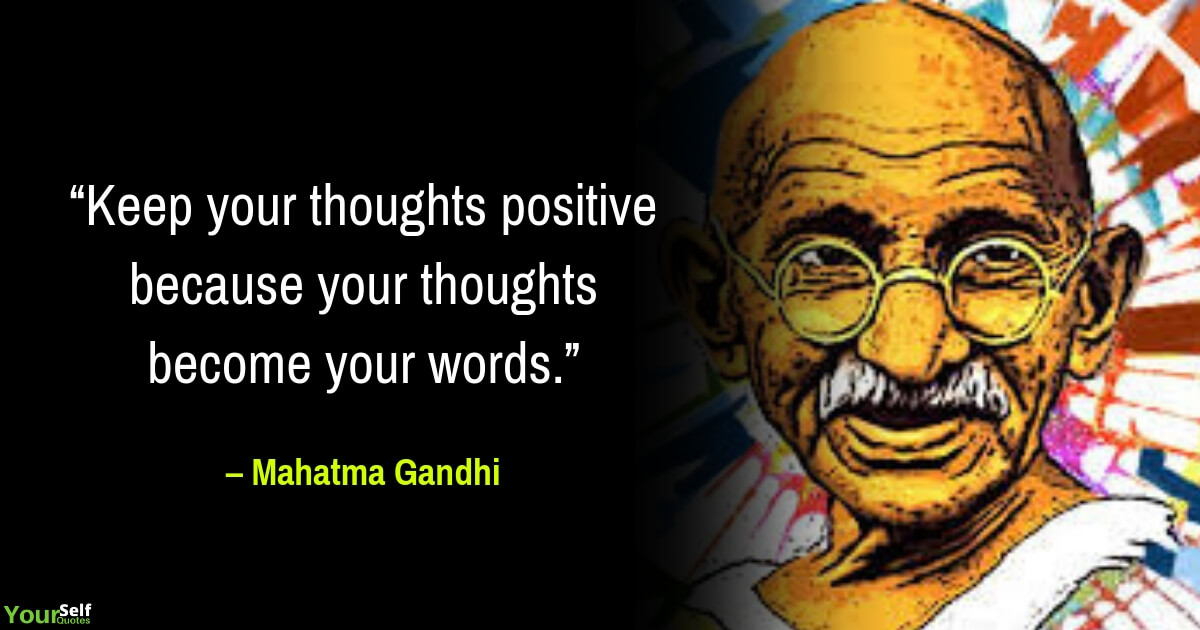 “It’s easy to stand in the crowd but it takes courage to stand alone.” – Mahatma Gandhi 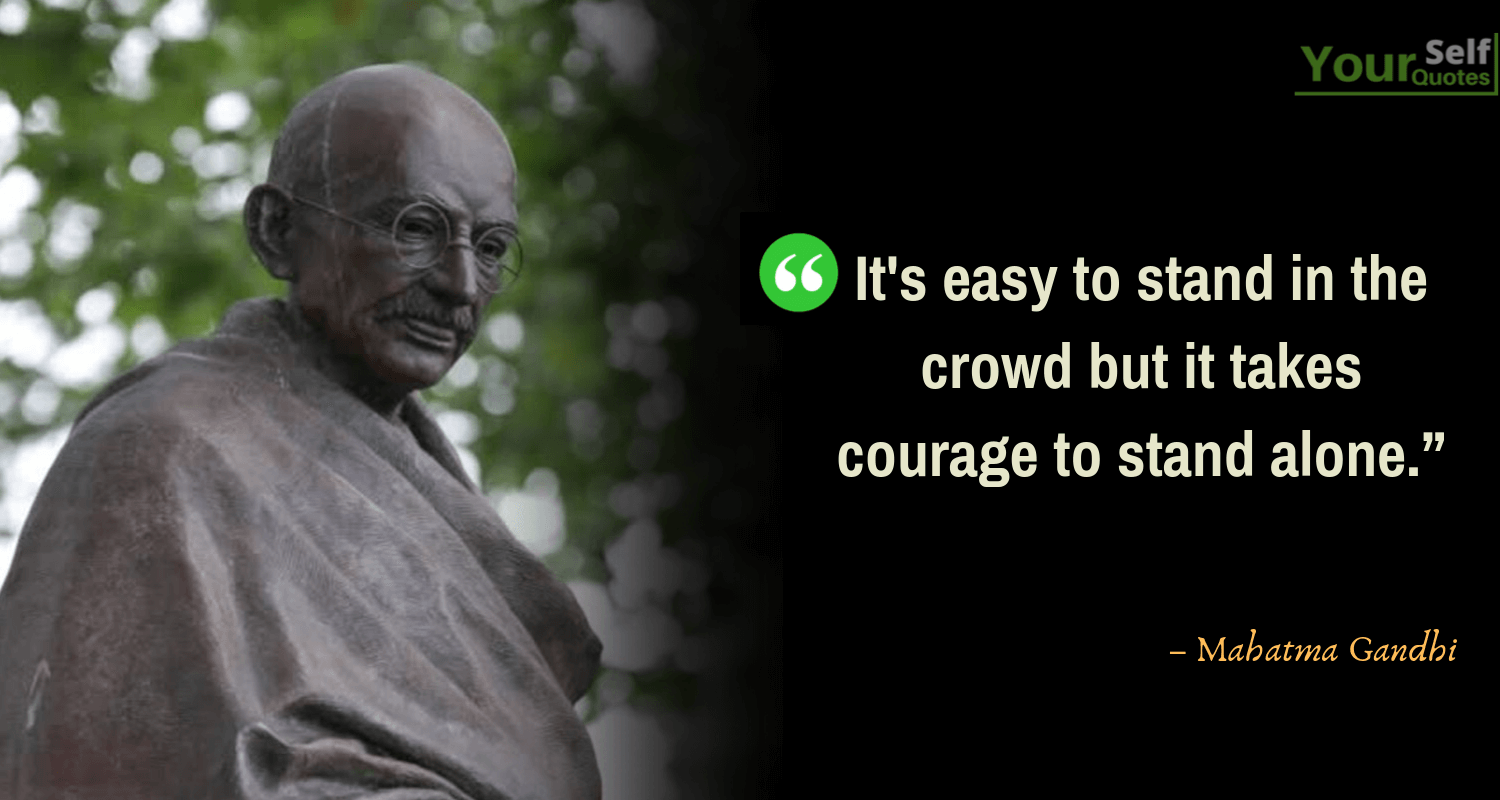 “The weak can never forgive. Forgiveness is the attribute of the strong.” – Mahatma Gandhi

“There would be no one to frighten you if you refused to be afraid.” – Mahatma Gandhi 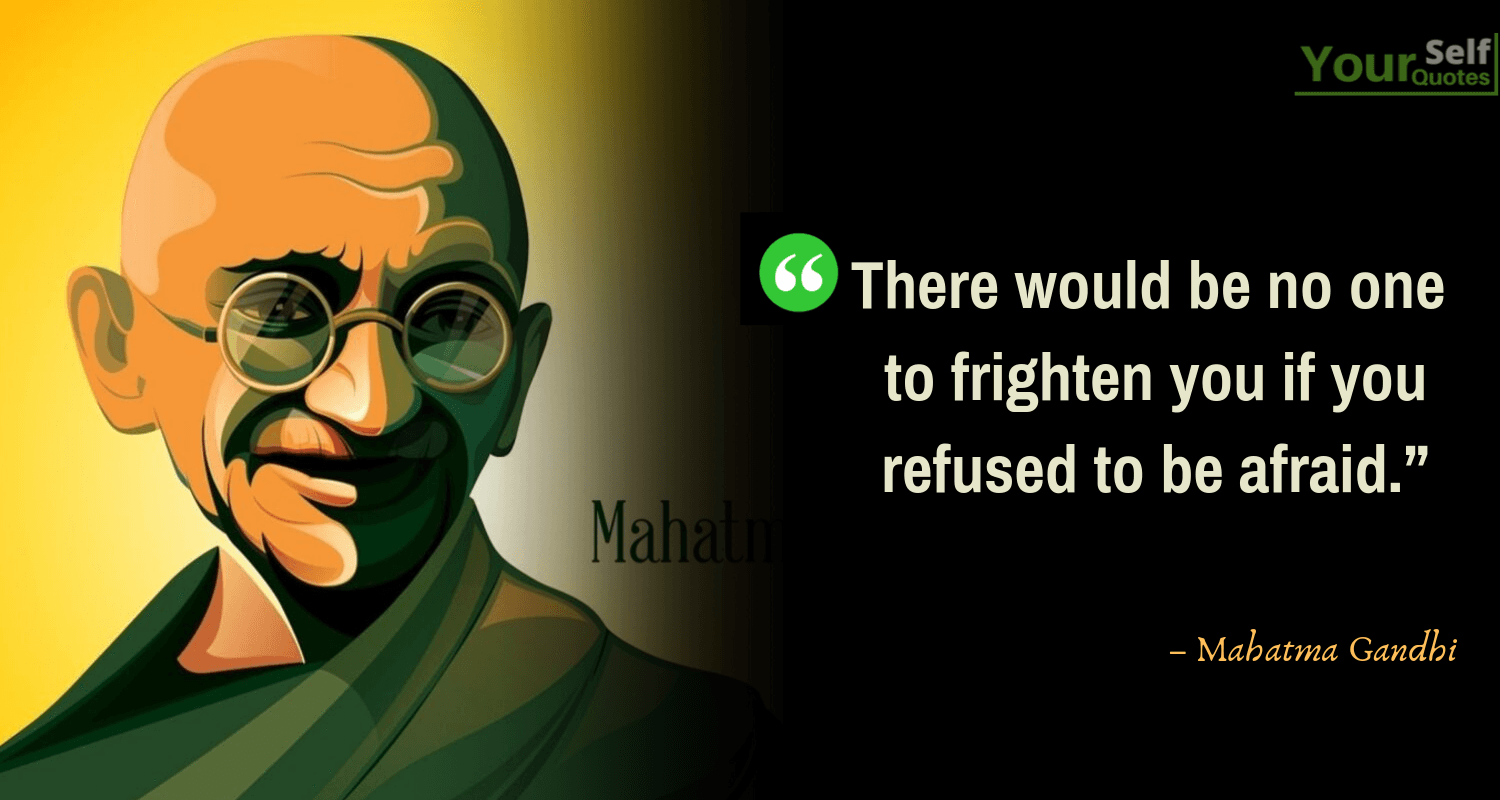 “It is a weakness which breeds fear, and fear breeds distrust.” – Mahatma Gandhi 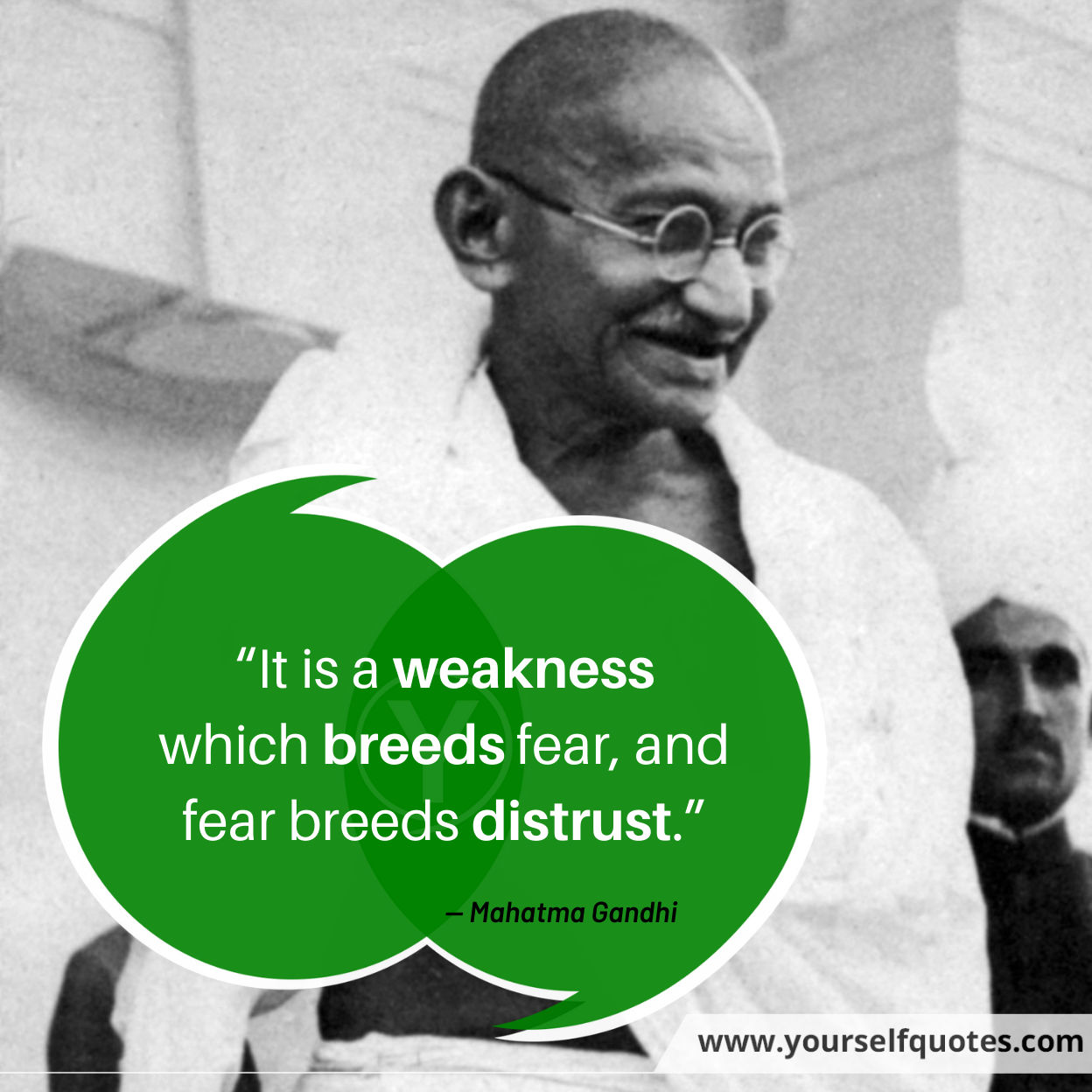 “Keep your words positive because your words become your behavior.” – Mahatma Gandhi 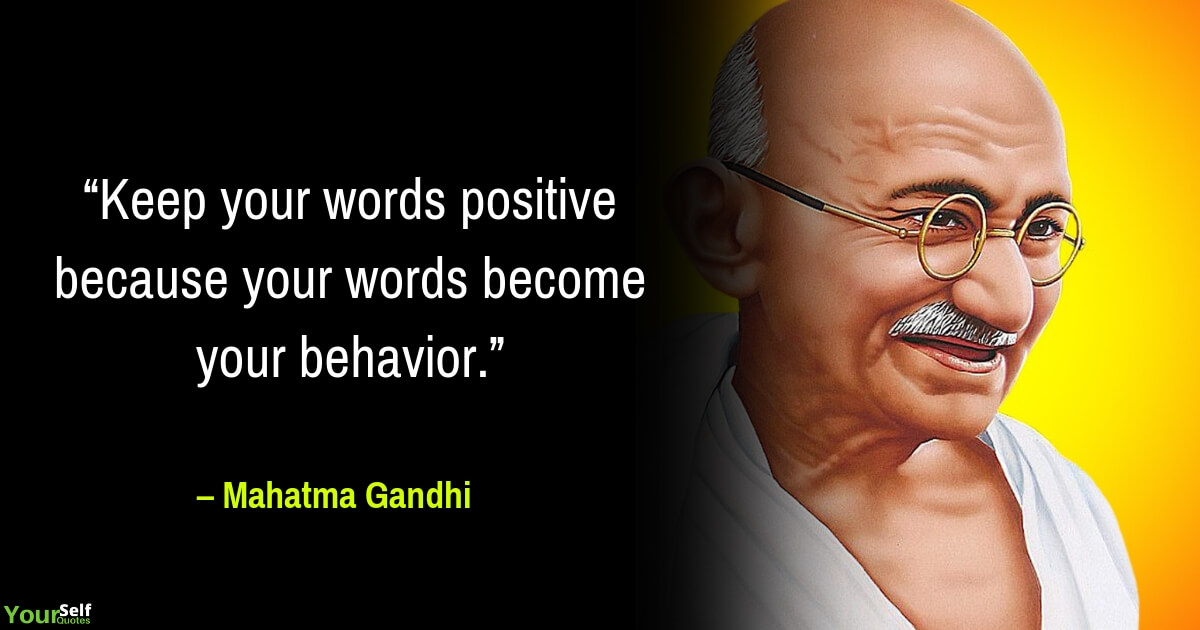 “Earth provides enough to satisfy every man’s needs, but not every man’s greed.” – Mahatma Gandhi 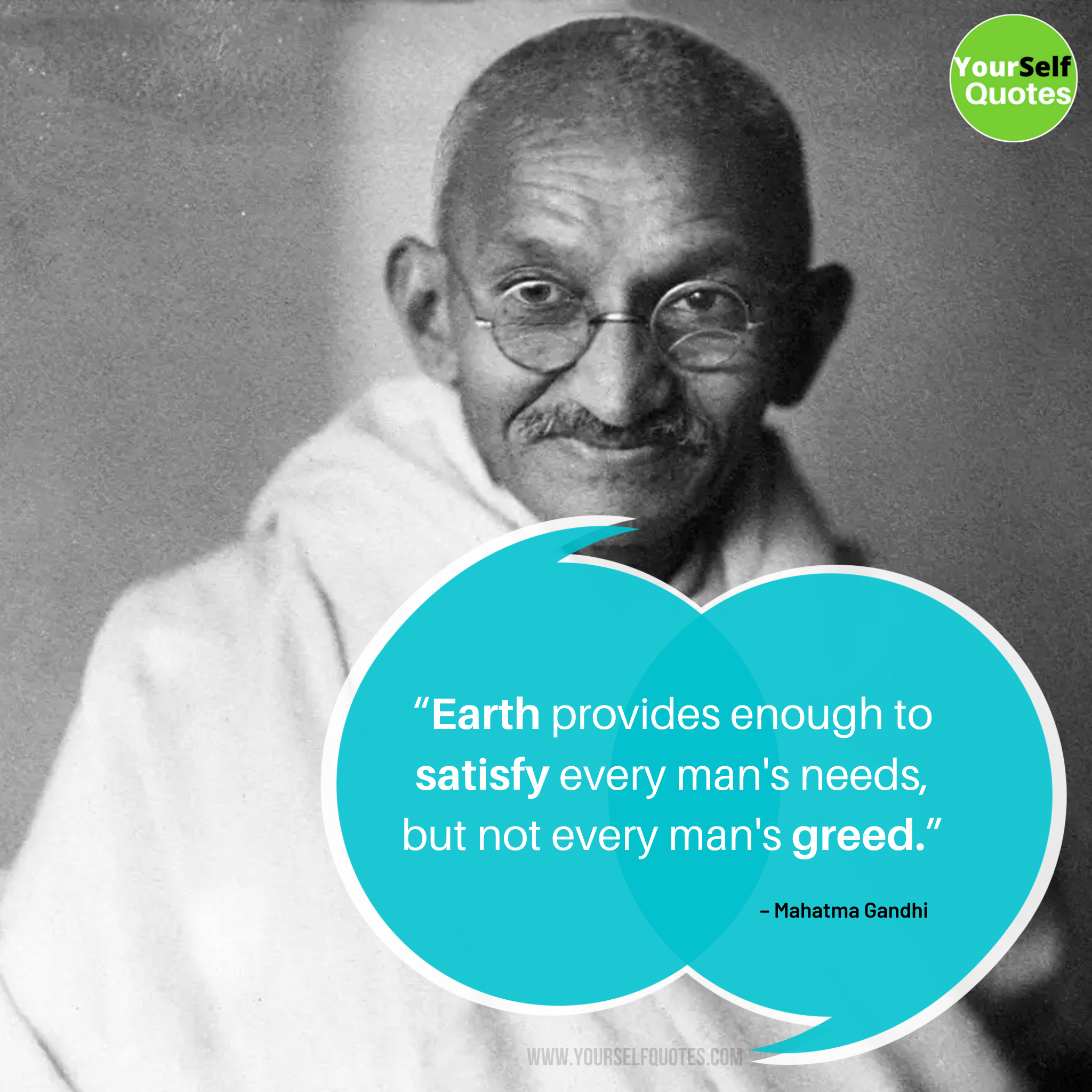 “You can chain me, you can torture me, you can even destroy this body, but you will never imprison my mind.” – Mahatma Gandhi 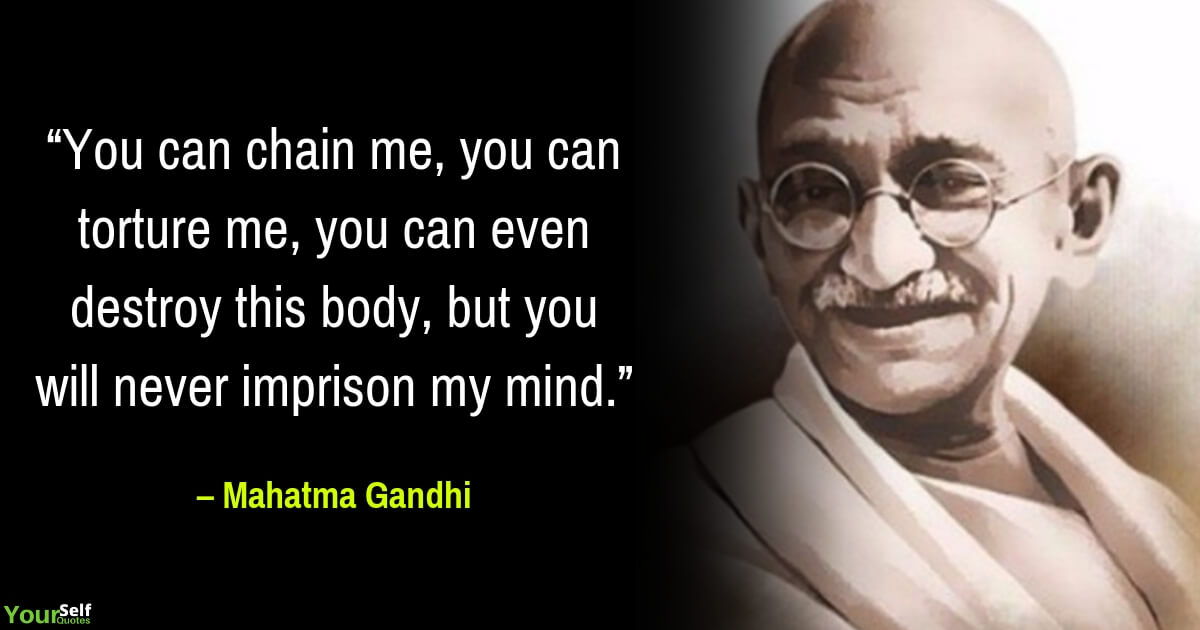 “A man is but the product of his thoughts. What he thinks, he becomes.” – Mahatma Gandhi 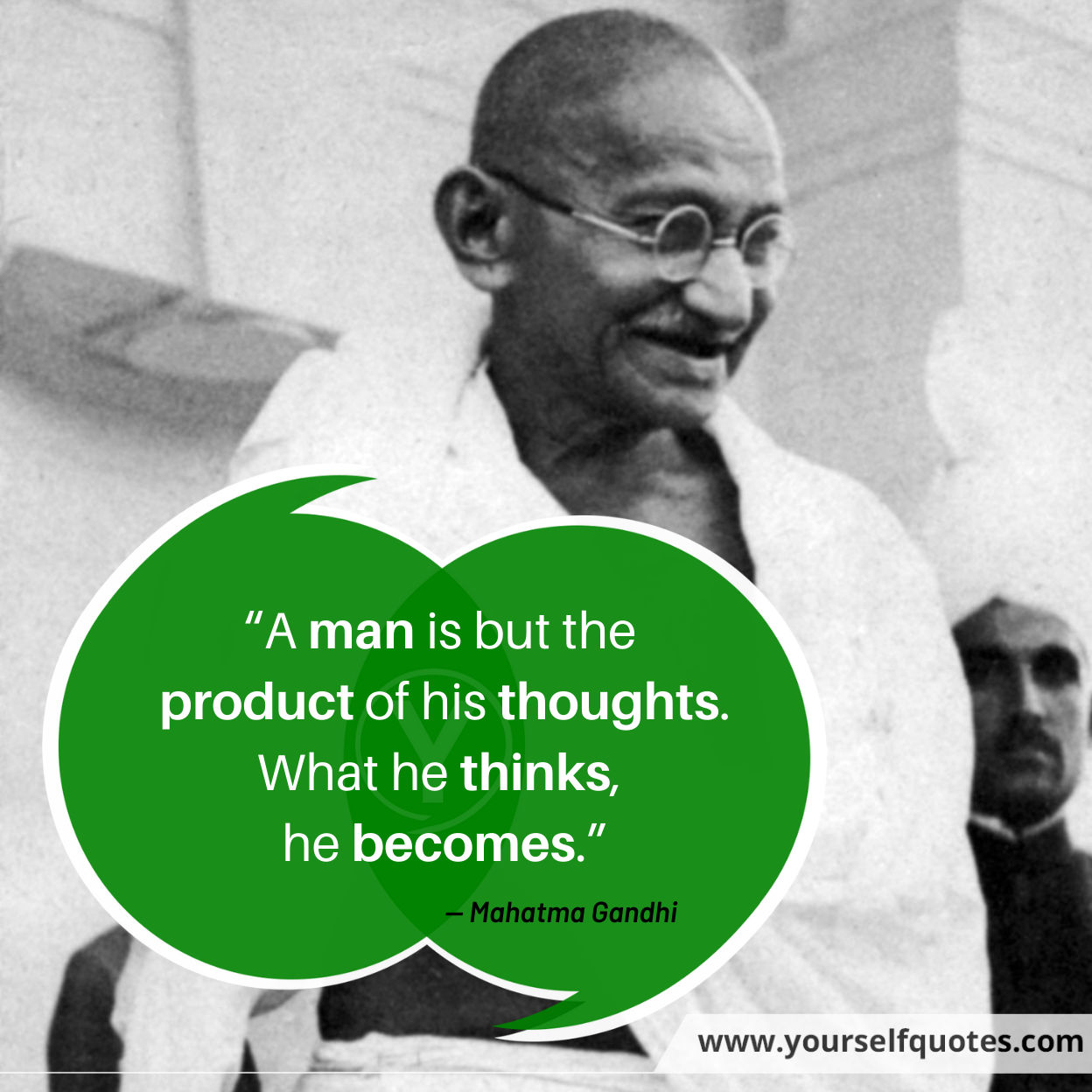 “An eye for an eye only ends up making the whole world blind.” – Mahatma Gandhi Quotes 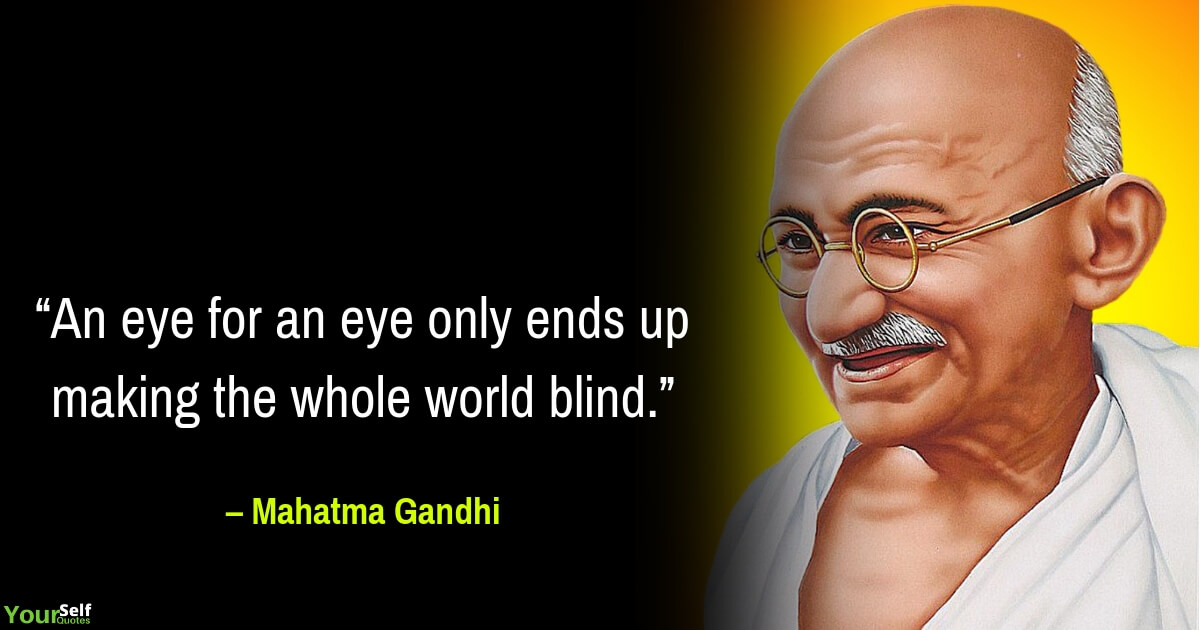 “The future depends on what you do today.” – Mahatma Gandhi 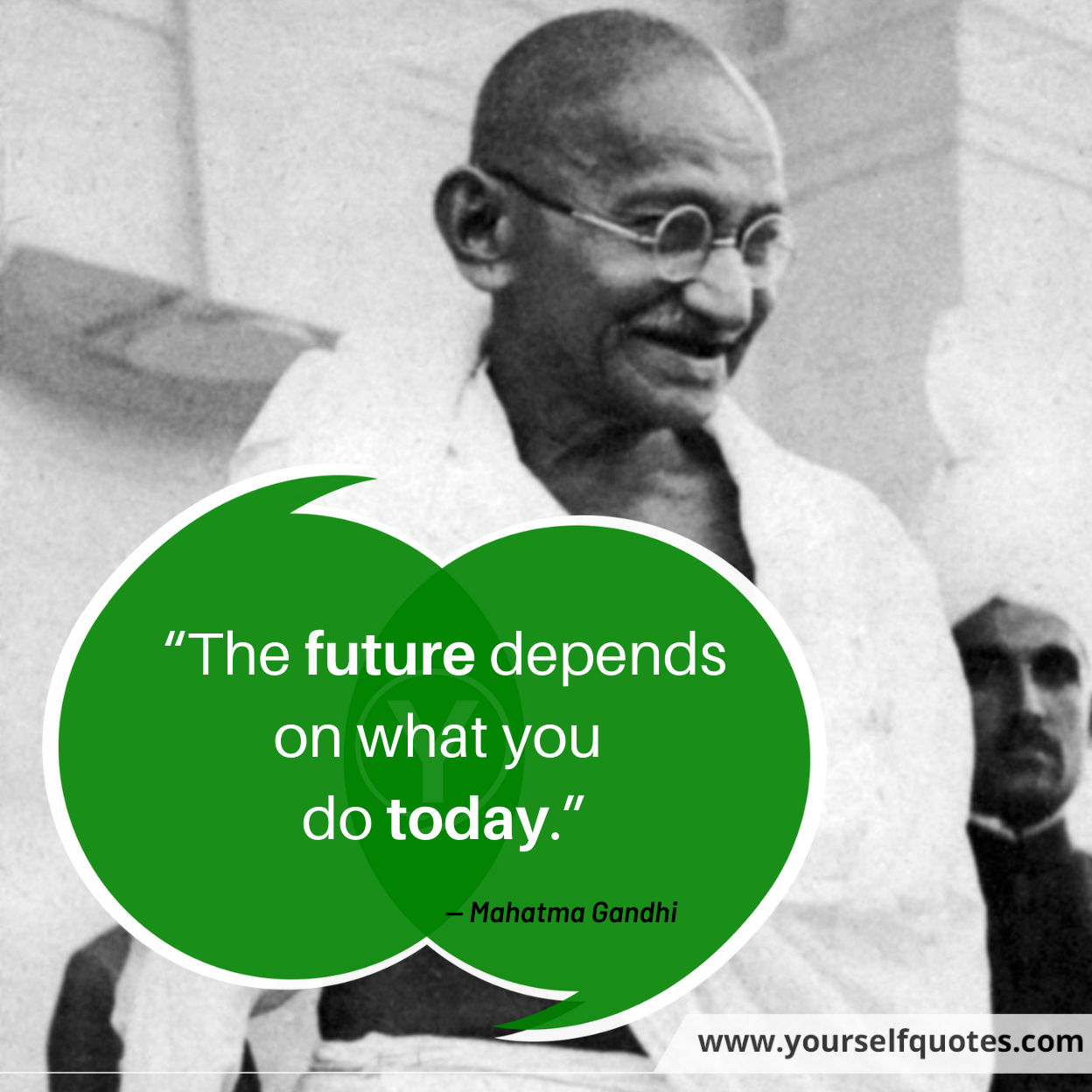 “Freedom is not worth having if it does not include the freedom to make mistakes.” – Mahatma Gandhi

“Strength does not come from physical capacity. It comes from an indomitable will.” – Mahatma Gandhi 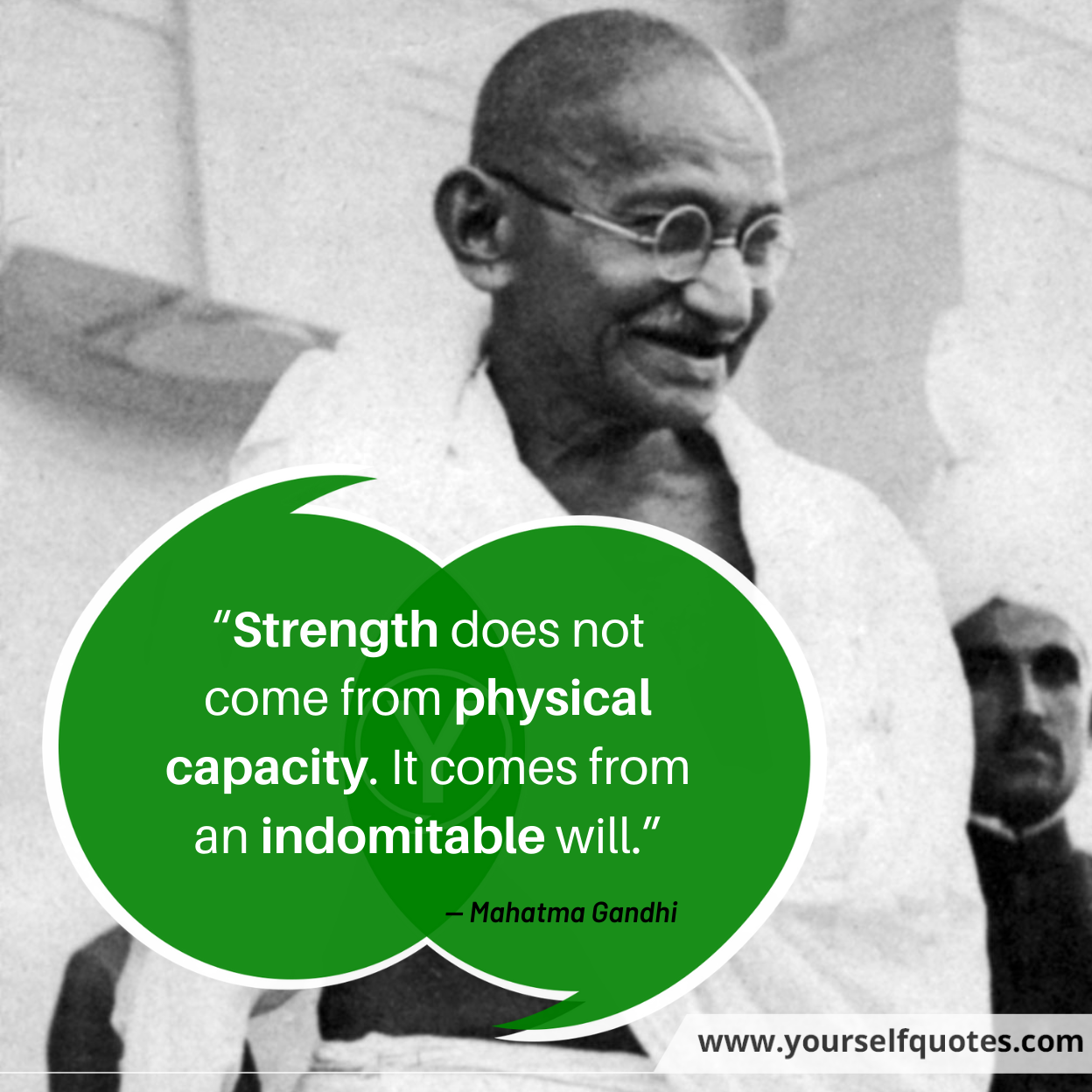 “What you do says what is most important to you. Action expresses priorities.” – Mahatma Gandhi 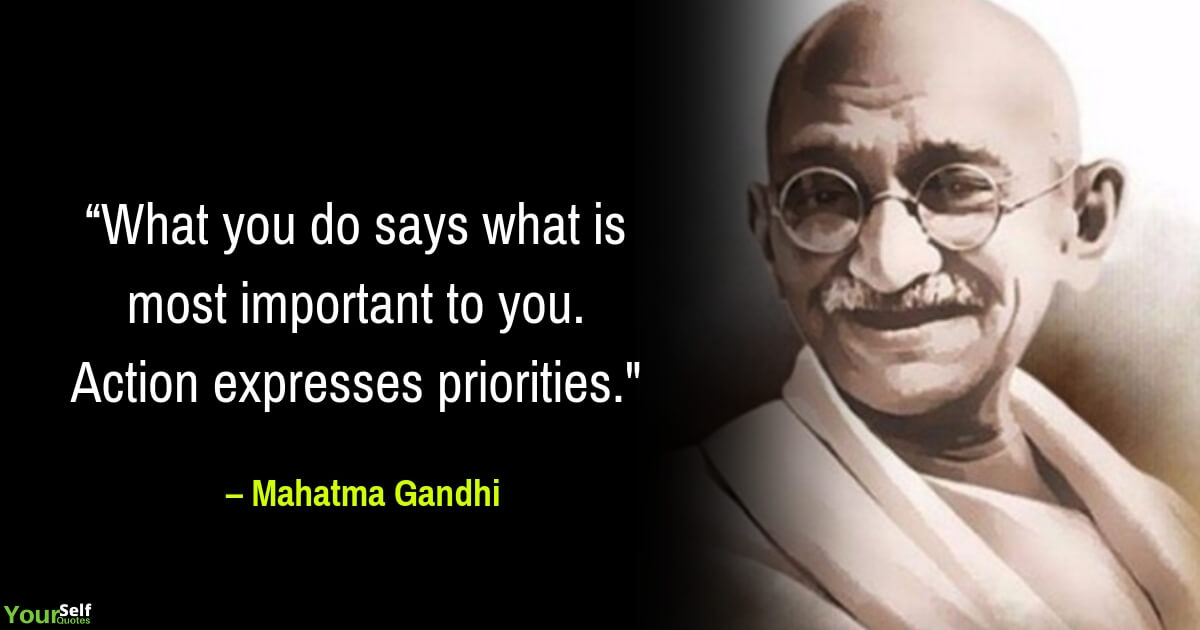 “I will not let anyone walk through my mind with their dirt.” – Mahatma Gandhi 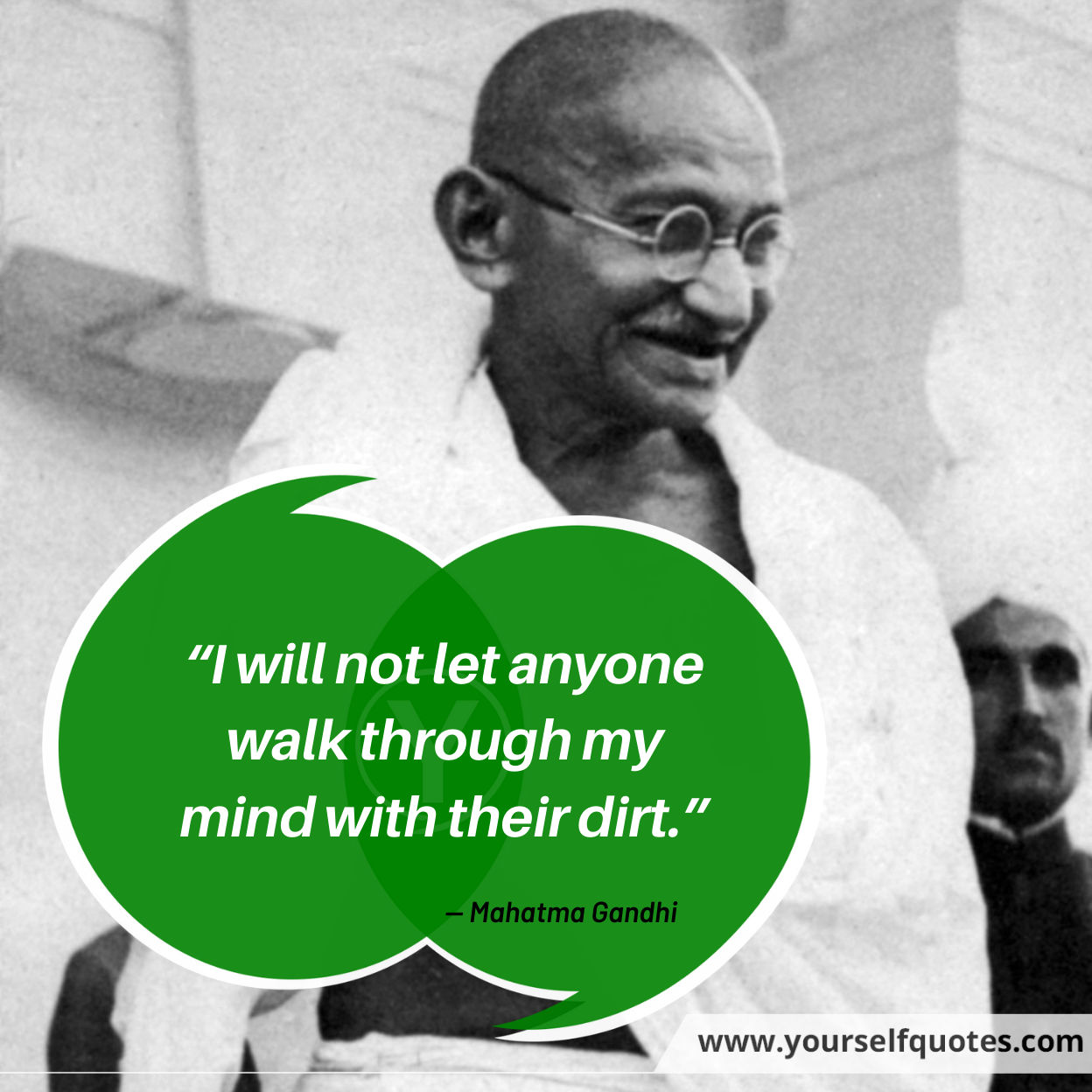 “The difference between what we do and what we are capable of doing would suffice to solve most of the world’s problem.”

“Happiness is when what you think, what you say, and what you do are in harmony.” – Mahatma Gandhi 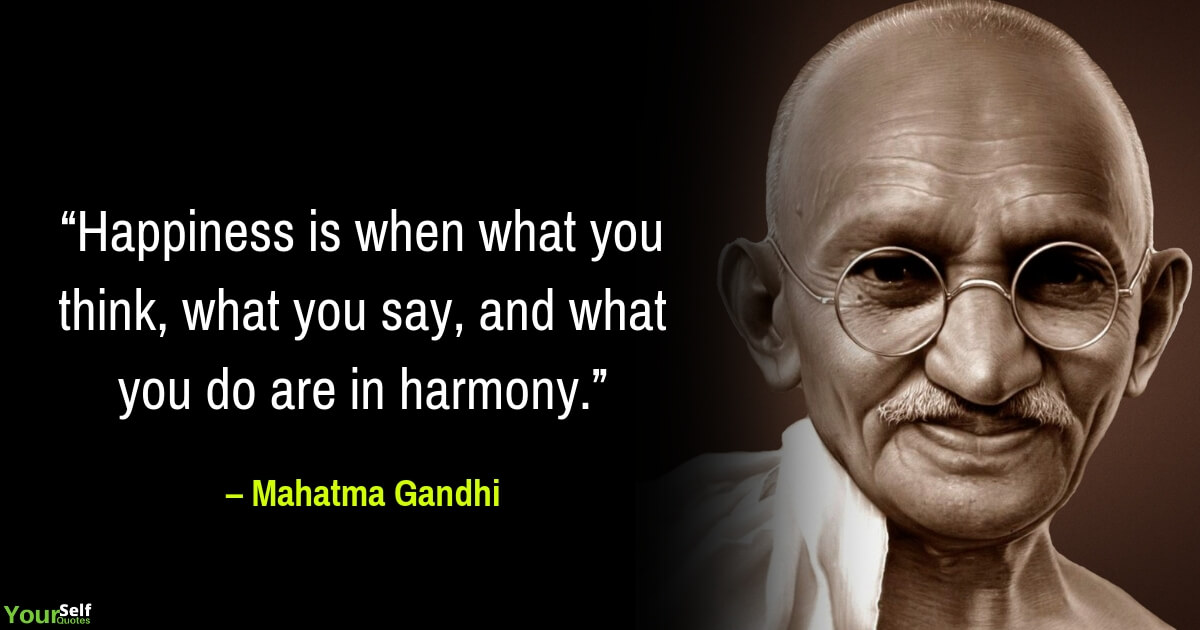 “You must not lose faith in humanity. Humanity is an ocean; if a few drops of the ocean are dirty, the ocean does not become dirty. – Mahatma Gandhi Quotes

“What do I think of Western civilization? I think it would be a very good idea.” – Mahatma Gandhi 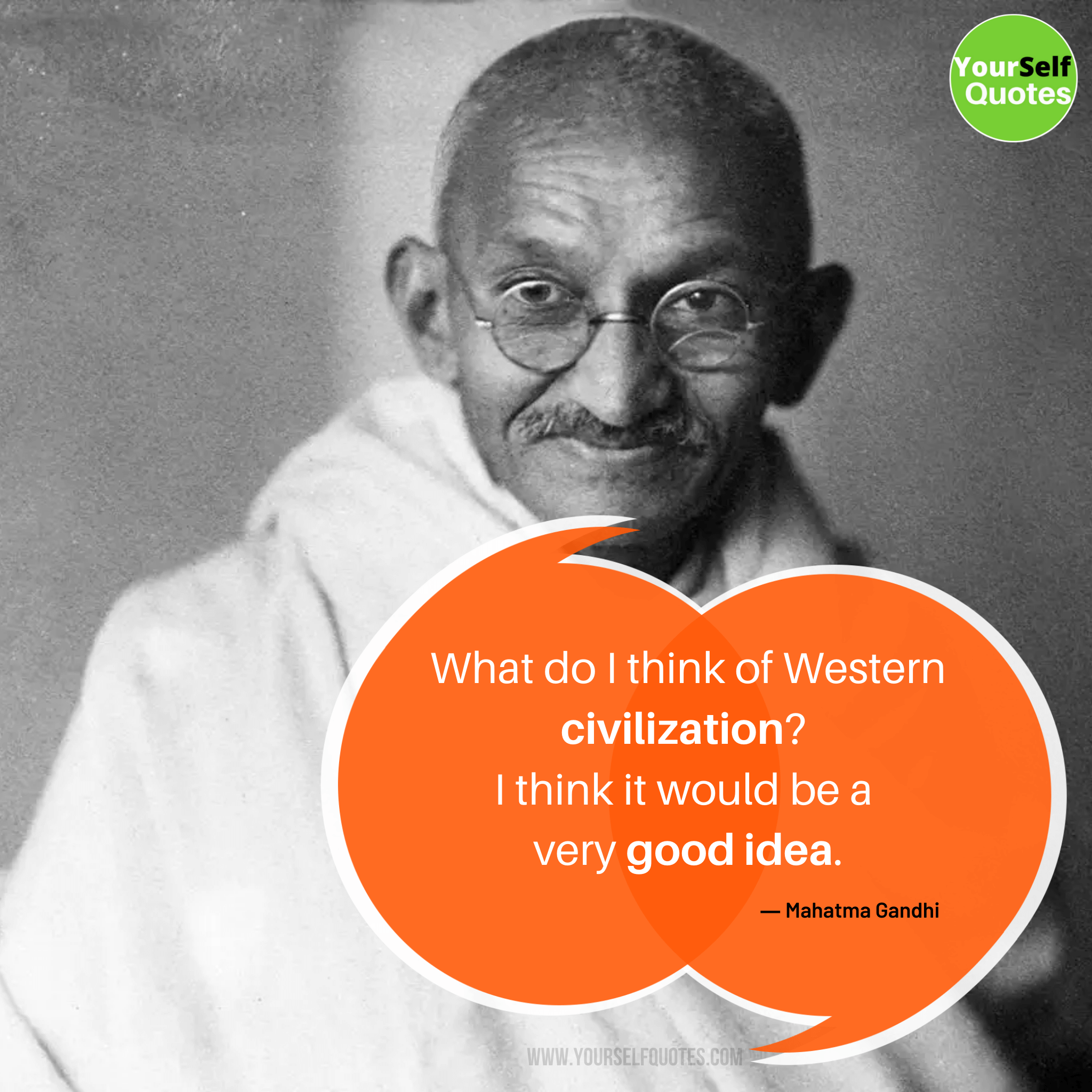 “My patriotism is not an exclusive thing. It is all-embracing and I should reject that patriotism which sought to mount upon the distress or exploitation of other nationalities.” – Mahatma Gandhi

“The still small voice within you must always be the final arbiter when there is a conflict of duty.” – Mahatma Gandhi 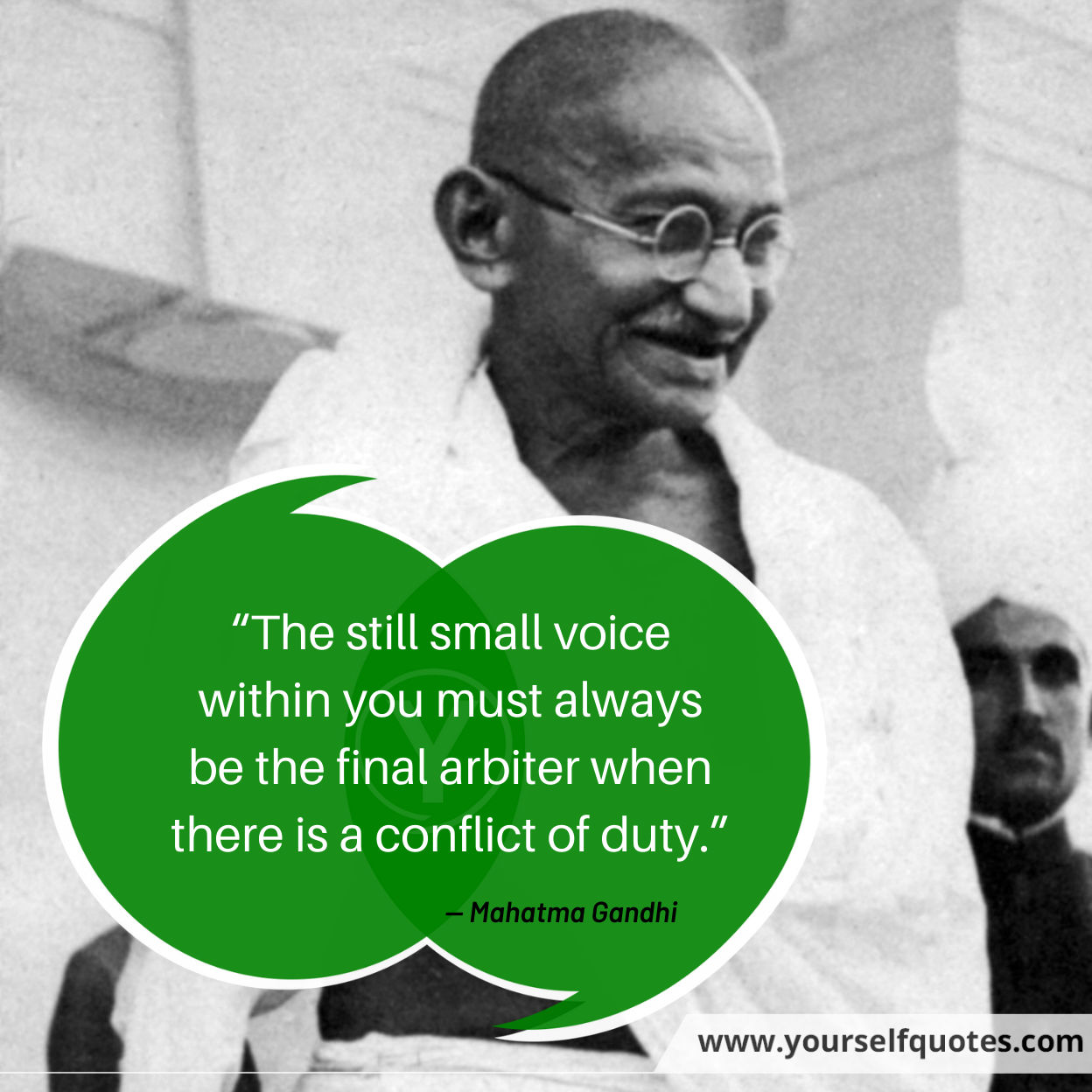 “You must not lose faith in humanity. Humanity is an ocean; if a few drops of the ocean are dirty, the ocean does not become dirty.” – Mahatma Gandhi

“Time is always on the side of those who will wait upon it.” – Mahatma Gandhi Quotes 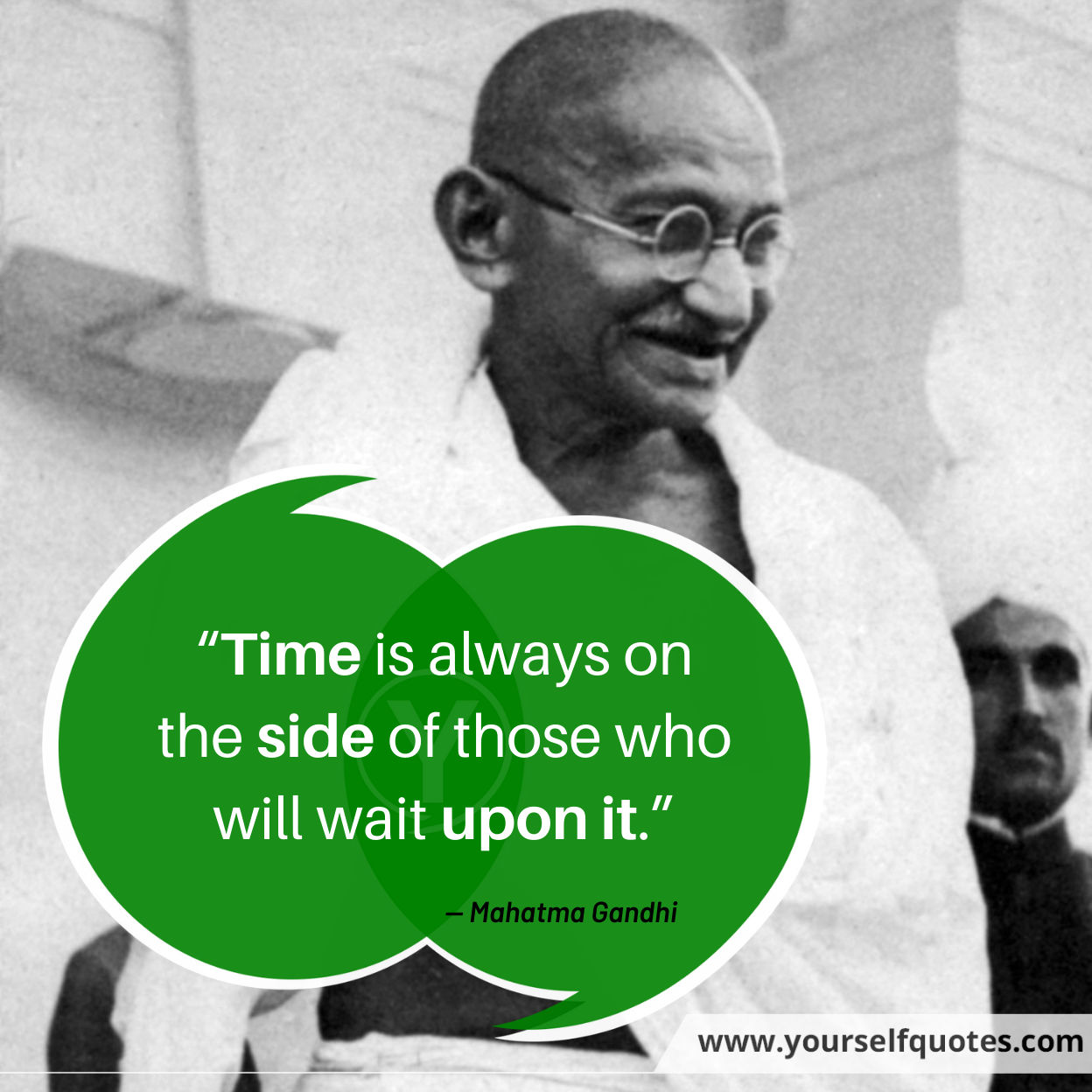 “The future depends on what we do in the present.” – Mahatma Gandhi Quotes 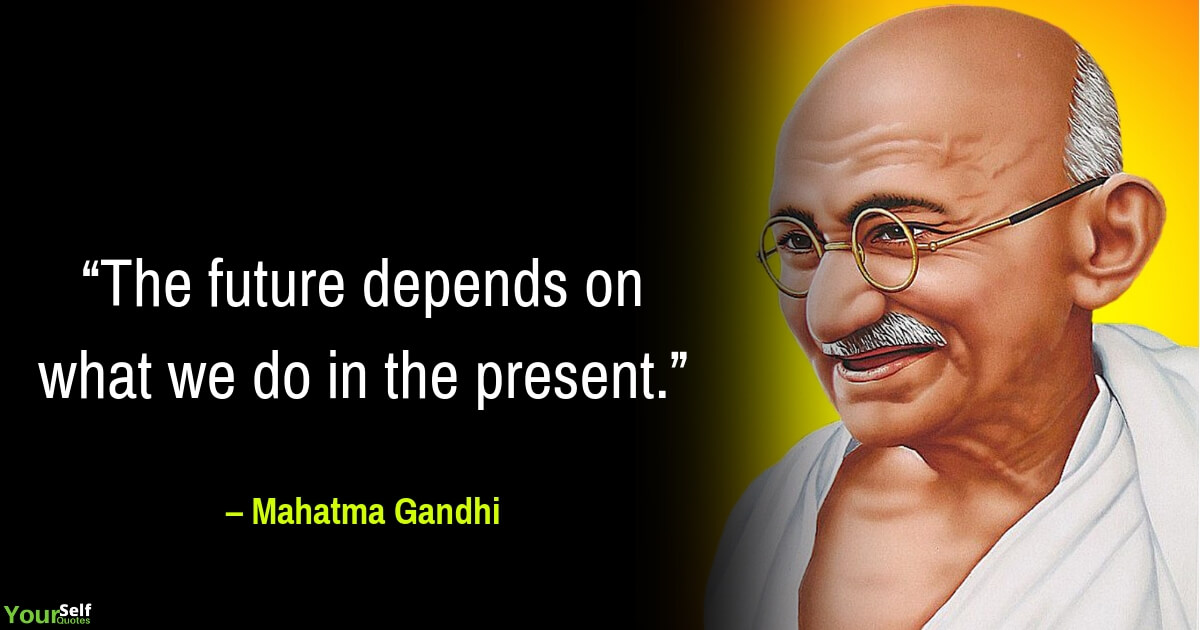 “Heroes are made in the hour of defeat. Success is, therefore, well described as a series of glorious defeats.” – Mahatma Gandhi 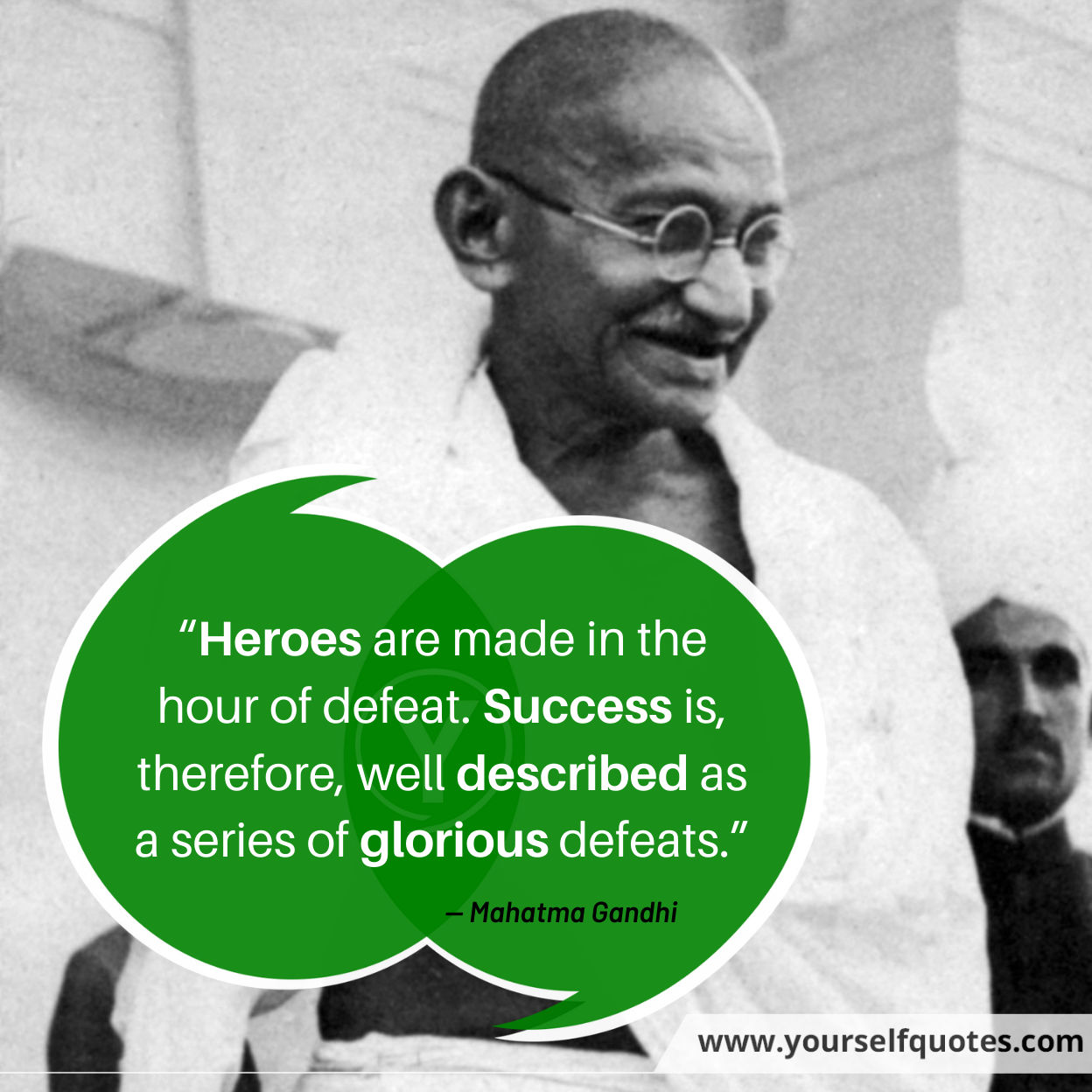 Spiritual, peaceful & inspirational footprints to walk on were laid by the “Father of Nation” Mahatma Gandhi. His teachings taught us to be non-violent & a personality with truth in our veins & heart. Now it depends on us whether we choose the path made by Bapu or us to go against it. Mahatma Gandhi was shot dead on 30th January 1948, three times on the chest by Nathu Ram Godse.

If we have a deep love for our nation & fellow beings then we will definitely love the pure words said by Gandhi Ji. You can change your mindset as well as thinking of your near & dear ones just by sharing these persuasive Quotes by Mahatma Gandhi to uplift your thoughts.