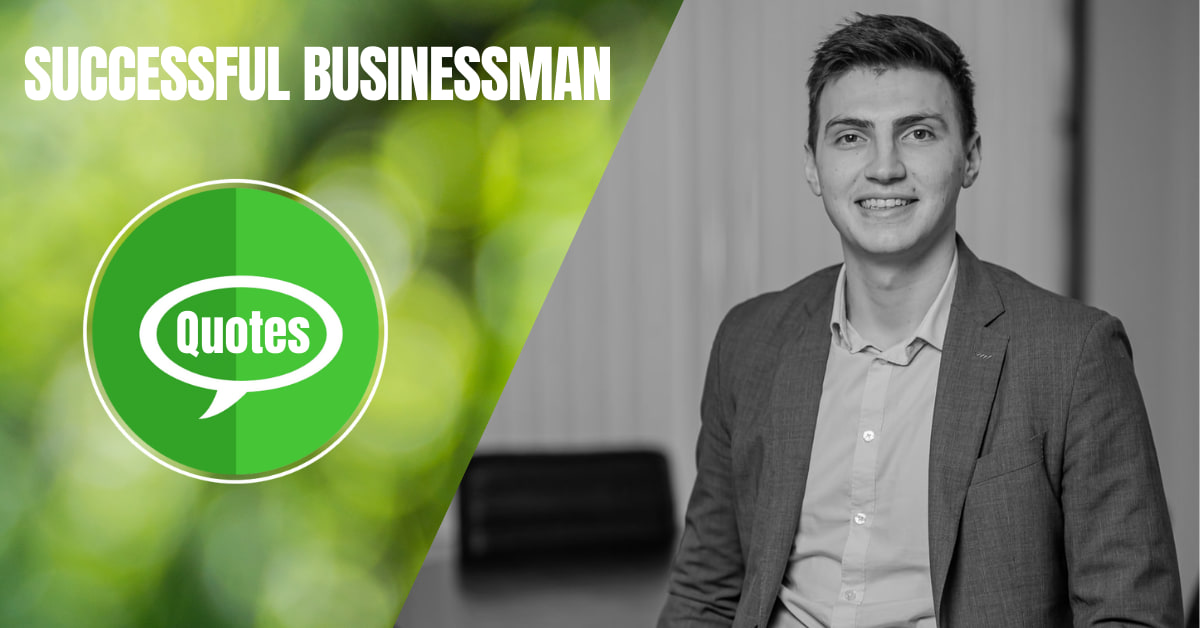 “Your most unhappy customers are your greatest source of learning.” ― Bill Gates 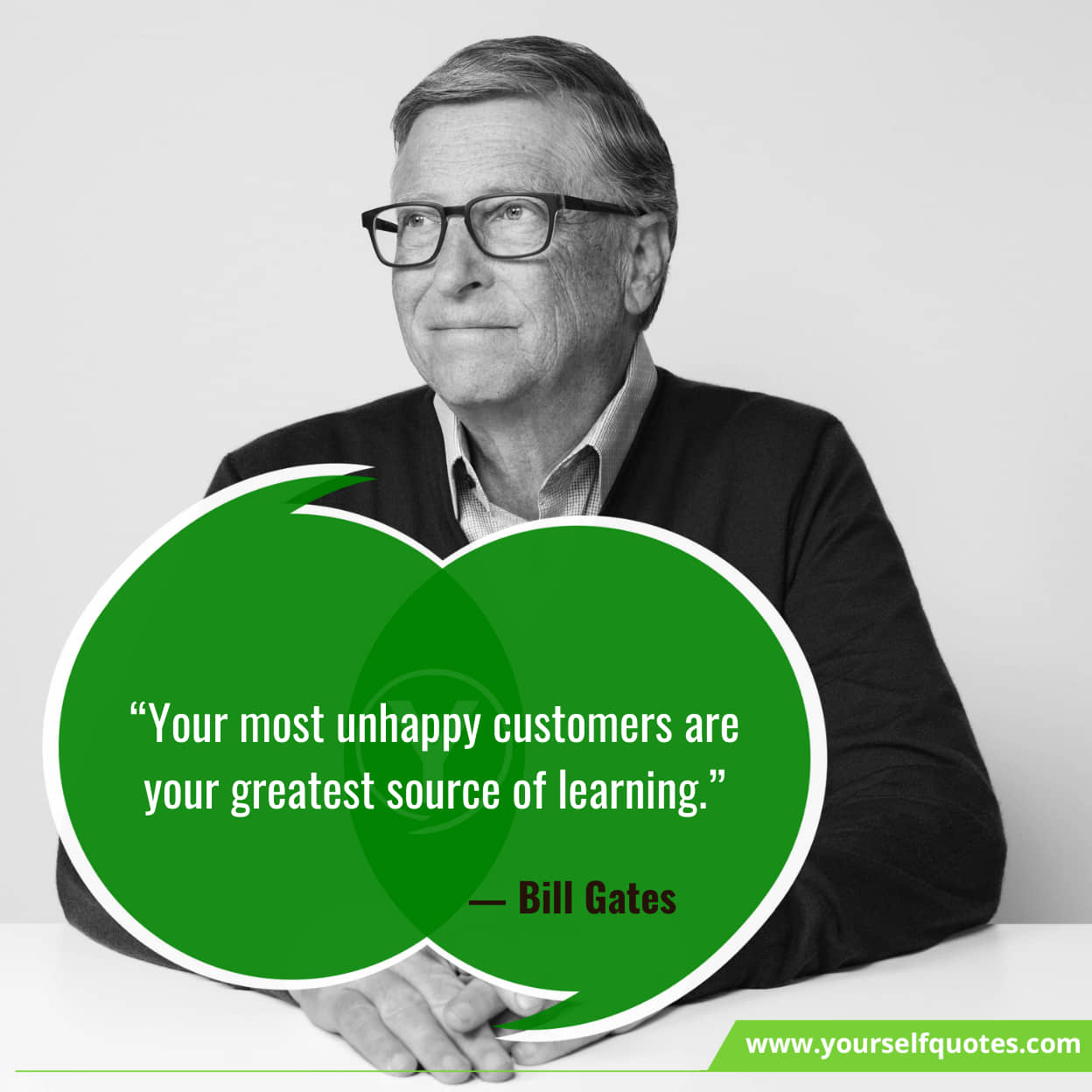 “Chains of habit are too light to be felt until they are too heavy to be broken.” ― Warren Buffett

“I think it is possible for ordinary people to choose to be extraordinary.” ― Elon Musk

“If you don’t build your dream, someone else will hire you to help them build theirs.” ― Dhirubhai Ambani

“Do not be embarrassed by your failures, learn from them and start again.” ― Richard Branson

“If you do build a great experience, customers tell each other about that. Word of mouth is very powerful.” ― Jeff Bezos

“I could either watch it happen or be a part of it.” ― Elon Musk

“Success is a lousy teacher. It seduces smart people into thinking they can’t lose.” ― Bill Gates

“Someone’s sitting in the shade today because someone planted a tree a long time ago.” ― Warren Buffett

“One thing is certain in business. You and everyone around you will make mistakes.” ― Richard Branson 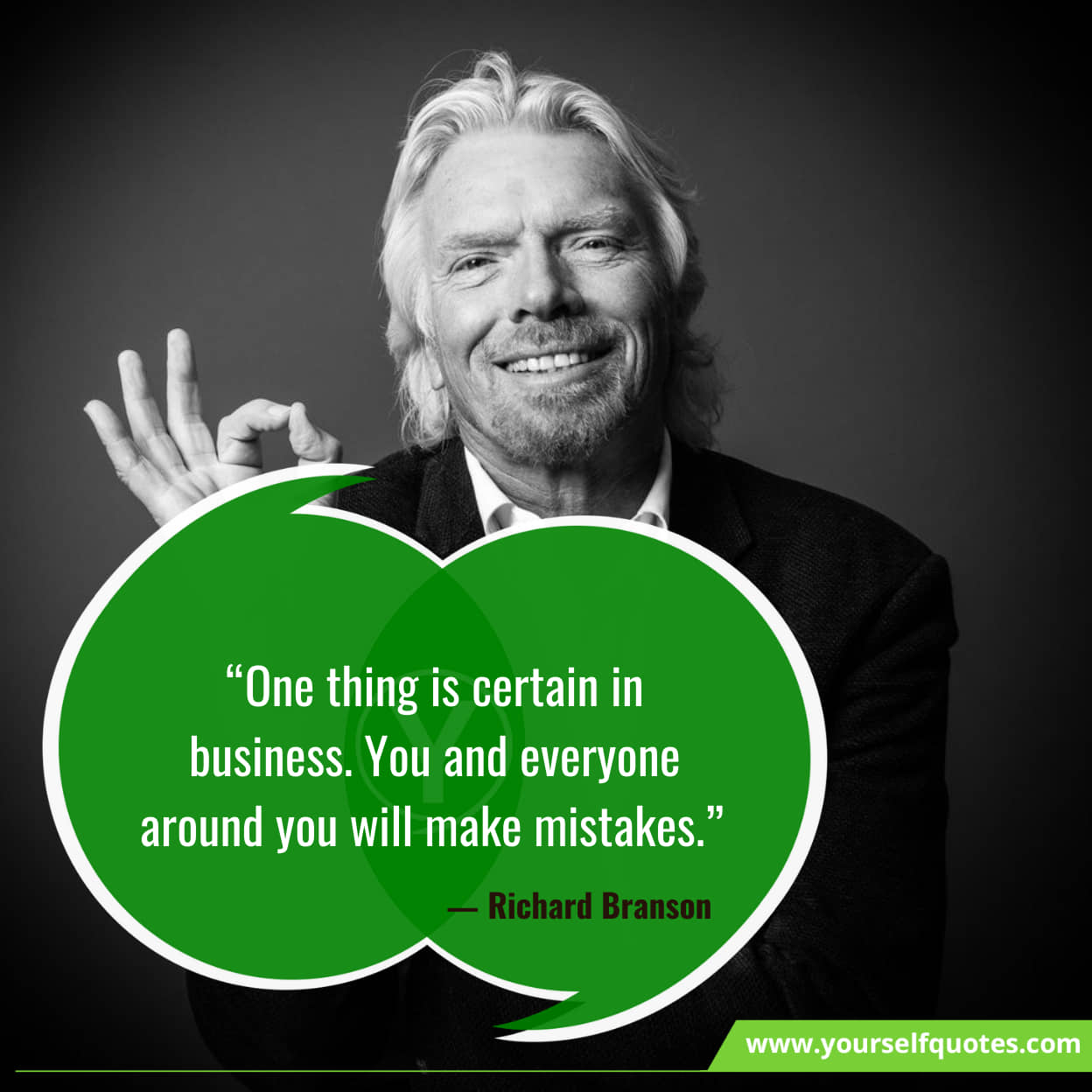 “A business has to be involving, it has to be fun, and it has to exercise your creative instincts.” ― Richard Branson

“Our dreams have to be bigger. Our ambitions are higher. Our commitment is deeper. And our efforts greater.” ― Dhirubhai Ambani

“One of the few ways to get out of a tight box is to invent your way out.” ― Jeff Bezos

“You don’t learn to walk by following rules. You learn by doing, and by falling over.” ― Richard Branson

“Life’s too short to hang out with people who aren’t resourceful.” ― Jeff Bezos

“As we look ahead into the next century, leaders will be those who empower others.” ― Bill Gates

“If you don’t understand the details of your business, you are going to fail.” ― Jeff Bezos 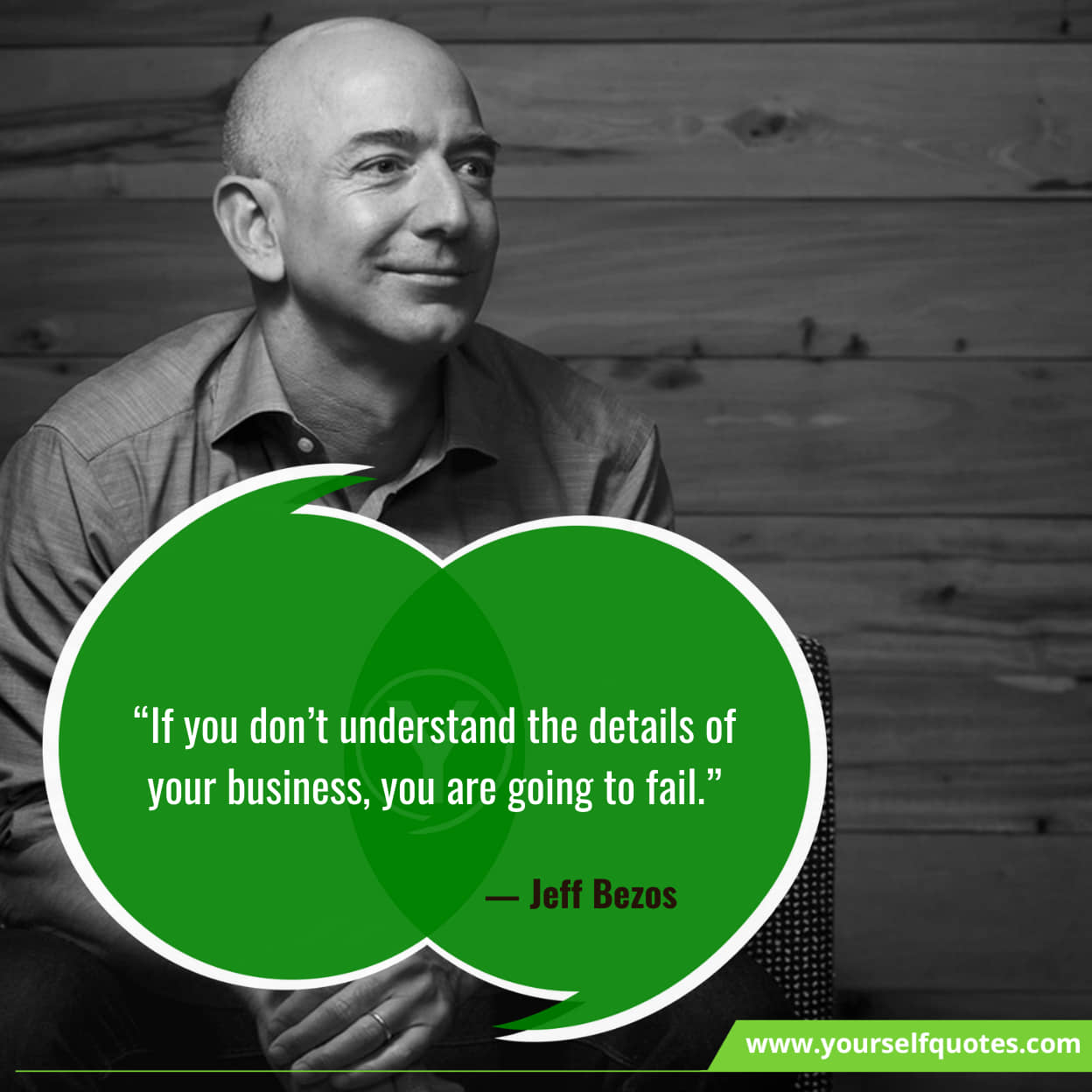 “When something is important enough, you do it even if the odds are not in your favour.” ― Elon Musk

“It’s only when the tide goes out that you discover who’s been swimming naked.” ― Warren Buffett

“The first step is to establish that something is possible, then probability will occur.” ― Elon Musk

“I always knew I was going to be rich. I don’t think I ever doubted it for a minute.” ― Warren Buffett

“The Internet is becoming the town square for the global village of tomorrow.” ― Bill Gates

“Business opportunities are like buses, there’s always another one coming.” ― Richard Branson

“If you get up in the morning and think the future is going to be better, it is a bright day. Otherwise, it’s not.” ― Elon Musk

“Pursue your goals even in the face of difficulties, and convert adversities into opportunities.” ― Dhirubhai Ambani

“If you’re born poor it’s not your fault, but if you die poor it’s your fault.” ― Bill Gates

“A brand for a company is like a reputation for a person. You earn reputation by trying to do hard things well.” ― Jeff Bezos

“Business opportunities are like buses: there’s always another one coming.” ― Richard Branson 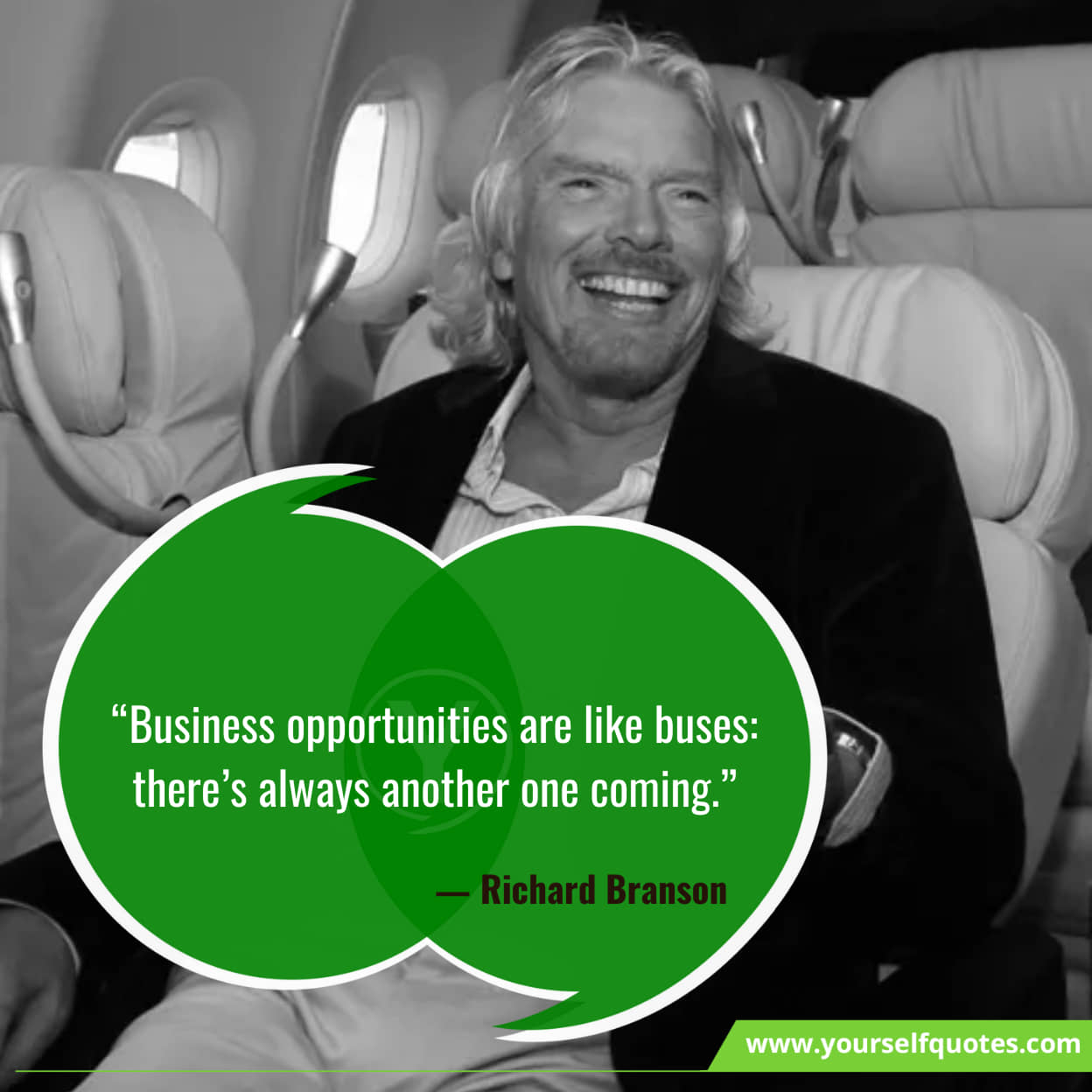 “Management is about human beings. Its task is to make people capable of joint performance, to make their strengths effective and their weaknesses irrelevant.”

“If you broke a lot of rules as a kid, you’d probably make a great entrepreneur.”

“It’s important to be willing to make mistakes. The worst thing that can happen is you become memorable.”

“I definitely see a correlation between how many things a company gets right and how fast a company grows.”

“In a world that’s changing really quickly, the only strategy that is guaranteed to fail is not taking risks.”

“As a leader, it’s a major responsibility on your shoulders to practise the behaviour you want others to follow.”

“Entrepreneurship is the last refuge of the trouble-making individual.” – Natalie Clifford Barney, playwright and novelist

“A full belly is little worth where the mind is starved.” – Mark Twain

“When something is important enough, you do it even if the odds are not in your favor.” ― Elon Musk

“I think it is often easier to make progress on mega-ambitious dreams. Since no one else is crazy enough to do it, you have little competition.”

“I knew that if I failed I wouldn’t regret that, but I knew the one thing I might regret is not trying.”

“When you find an idea that you just can’t stop thinking about, that’s probably a good one to pursue.”

“It’s not about ideas. It’s about making ideas happen.”

“Entrepreneur is someone who has a vision for something and a want to create.”

“When I’m old and dying, I plan to look back on my life and say ‘wow, that was an adventure,’ not ‘wow, I sure felt safe.”

“Instead of wondering when your next vacation is, maybe you should set up a life you don’t need to escape from.” ― Seth Godin 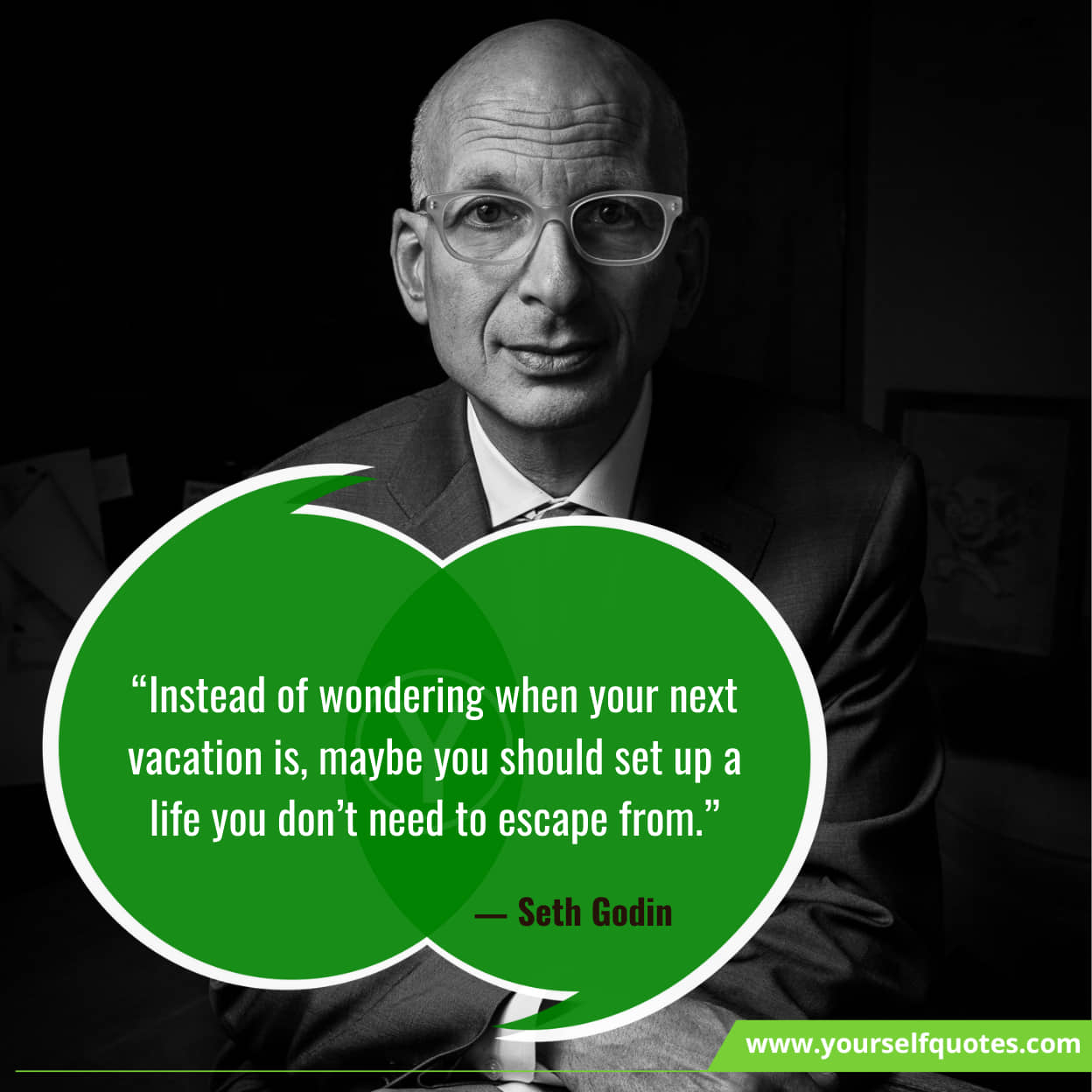 Which are your favorite Successful Businessman Quotes? Leave a comment below.