Rumi Birthday: The great poet was born on 30 September 1207 in Tajikistan, Afghanistan.

Rumi Family: The sufi poet was born to native Persian-speaking parents. His father was Bahā ud-Dīn Walad, who was a theologian, jurist and a mystic from Balkh, he was also known by the followers of Rumi as Sultan al-Ulama or “Sultan of the Scholars”. The mother of Rumi was Mu’mina Khātūn.

At the age of 25 years, Rumi inherited the position of Islamic Molvi, after the death of his father. At that time he started practicing Sufism. Then after he became an Islamic Jurist, issuing fatwas and giving sermons in the mosques of Konya. On the later stage, he transformed into an ascetic.

The poetry written by Rumi touches the heart of everyone. It speaks about love which infuses the world. His teachings make us aware about tenets summarized in the Quranic verse which Shams-e Tabrizi cited as the essence of prophetic guidance:

Rumi was a strong believer in the use of music, poetry, and dance as a path for reaching God. According to him, music was a source that helped devotees to focus their whole being on the divine. His teachings became the base for the order of the Mevlevi, which his son Sultan Walad organized. His poetry was categorized into the quatrains (rubayāt) and odes (ghazal) of the Divan, the six books of the Masnavi. The prose works are divided into The Discourses, The Letters, and the Seven Sermons.

This poetic personality has greatly influenced the human mankind. Now let’s go through some of the most poetic Rumi Quotes.

“When you do things from your soul, you feel a river moving in you, a joy.” — Rumi

“Let yourself be silently drawn by the strong pull of what you really love.” — Rumi

“Live life as if everything is rigged in your favor.” — Rumi

“Love is the bridge between you and everything.” — Rumi

“What you seek is seeking you.” — Rumi

“When you let go of who you are, you become who you might be.” — Rumi

“Our greatest strength lies in the gentleness and tenderness of our heart.” — Rumi

“Remember, the entrance door to the sanctuary is inside you.” — Rumi

“If everything around seems dark, look again, you may be the light.” — Rumi

“Your task is not to seek for love, but merely to seek and find all the barriers within yourself that you have built against it.” — Rumi

“Wherever you are, and whatever you do, be in love.” — Rumi

“In your light I learn how to love. In your beauty, how to make poems. You dance inside my chest, where no one sees you, but sometimes I do, and that light becomes this art.” — Rumi

“Since in order to speak, one must first listen, learn to speak by listening.” — Rumi

“You will learn by reading, But you will understand with LOVE.” — Rumi 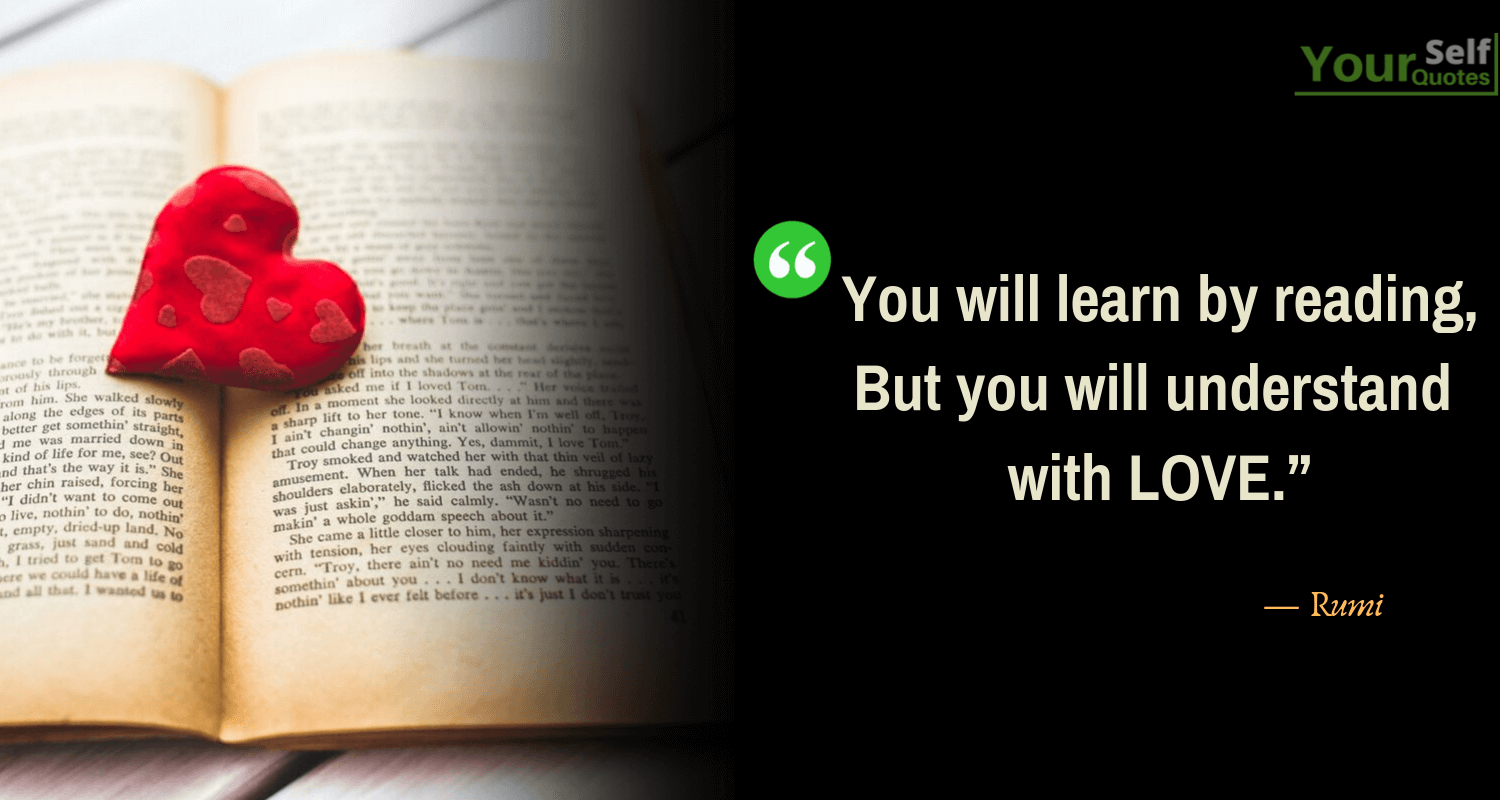 “The minute I heard my first love story, I started looking for you, not knowing how blind that was. Lovers don’t finally meet somewhere. They’re in each other all along.” — Rumi

“The wound is the place where the Light enters you.”— Rumi 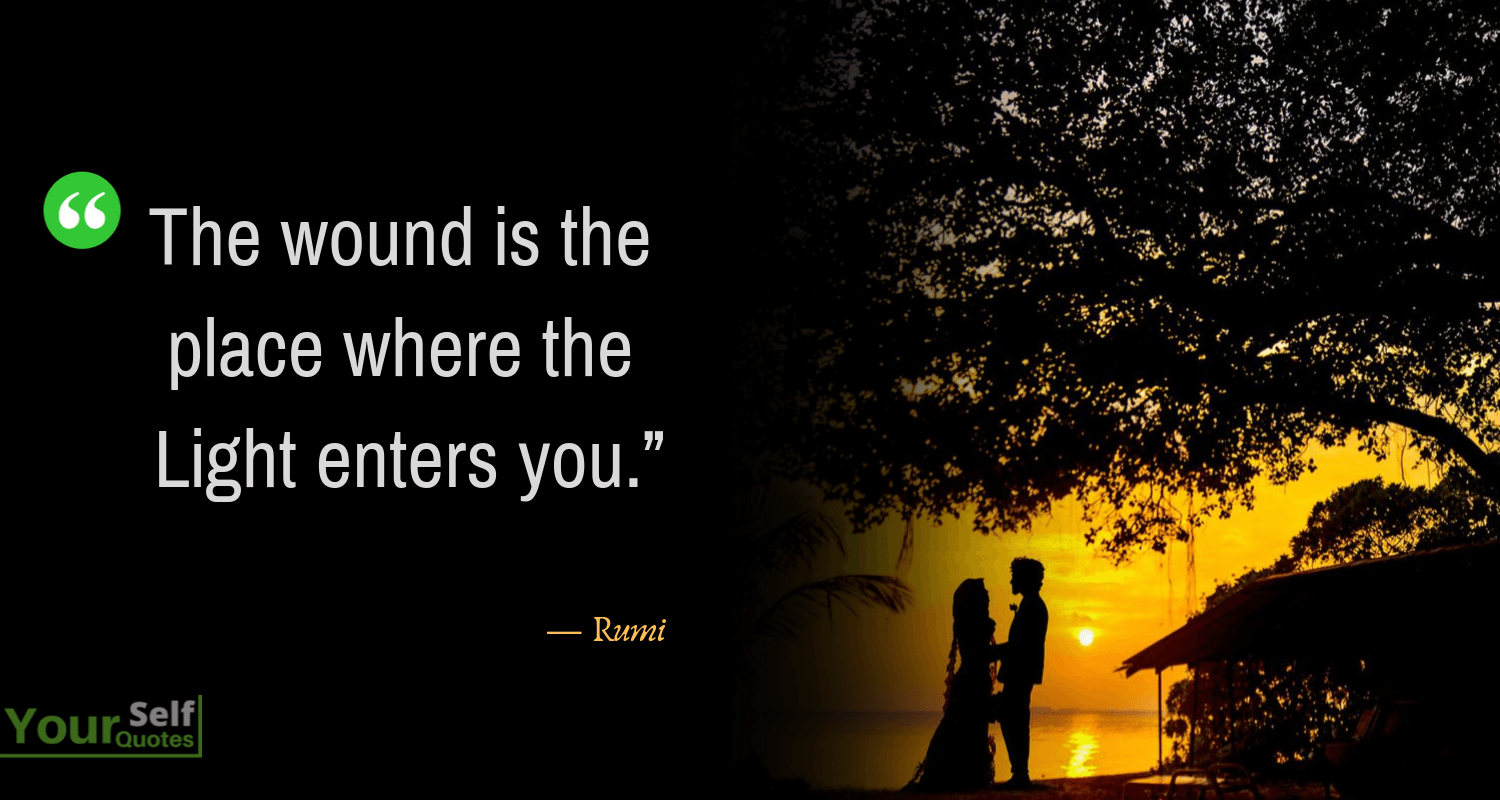 “The inspiration you seek is already within you. Be silent and listen.”— Rumi

“Words are a pretext. It is the inner bond that draws one person to another, not words.” — Rumi 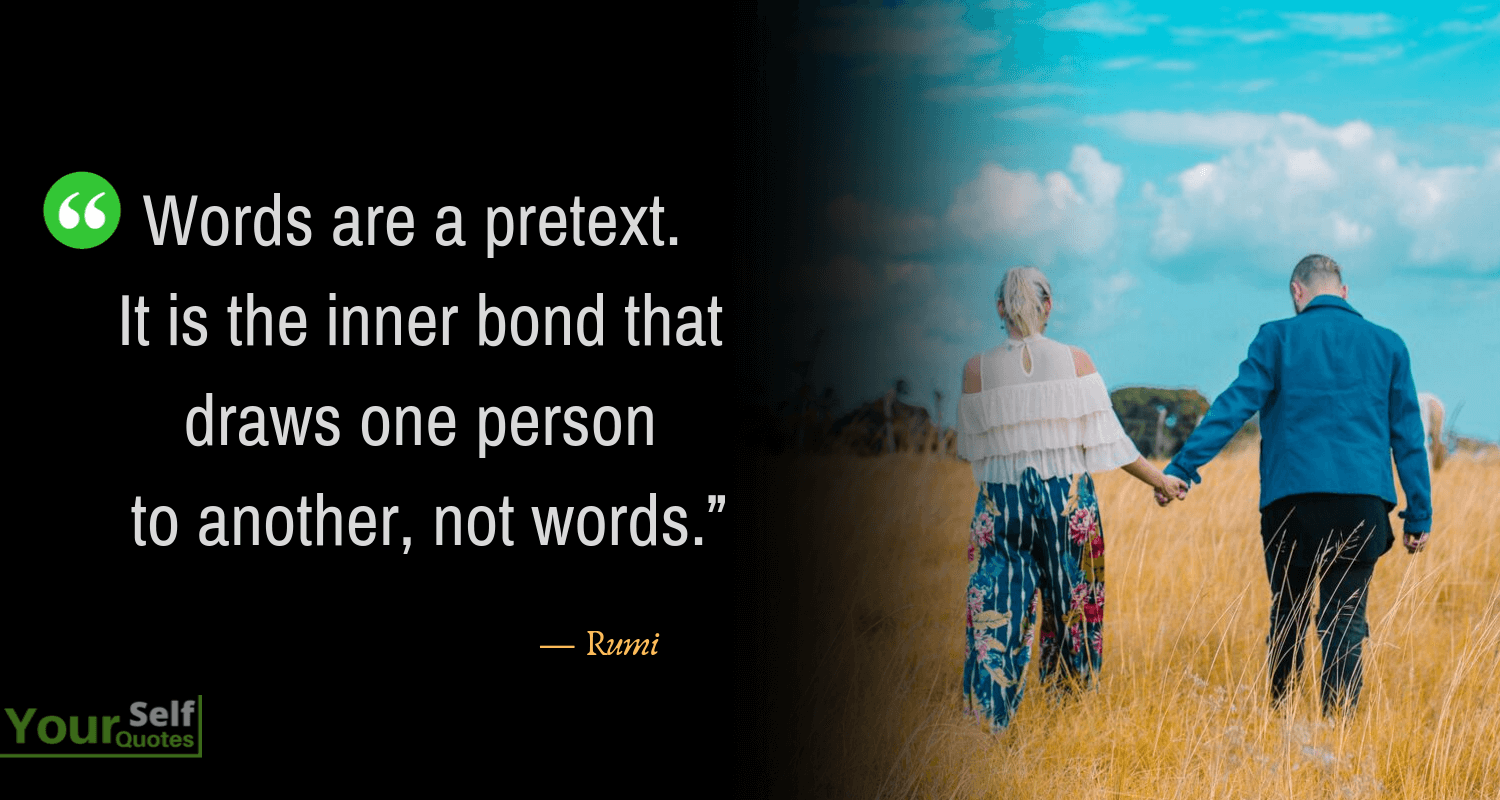 “Darkness may hide the trees and the flowers from the eyes but it cannot hide love from the soul.”— Rumi

“With life as short as a half taken breath, don’t plant anything but love.” — Rumi

“Travel brings power and love back into your life.” — Rumi

“Stop acting so small. You are the universe in ecstatic motion.”— Rumi

“A craftsman pulled a reed from the reed bed, cut holes in it, and called it a human being. Since then, it’s been wailing a tender agony of parting, never mentioning the skill that gave it life as a flute.” — Rumi

“If light is in your heart you will find your way home.” — Rumi 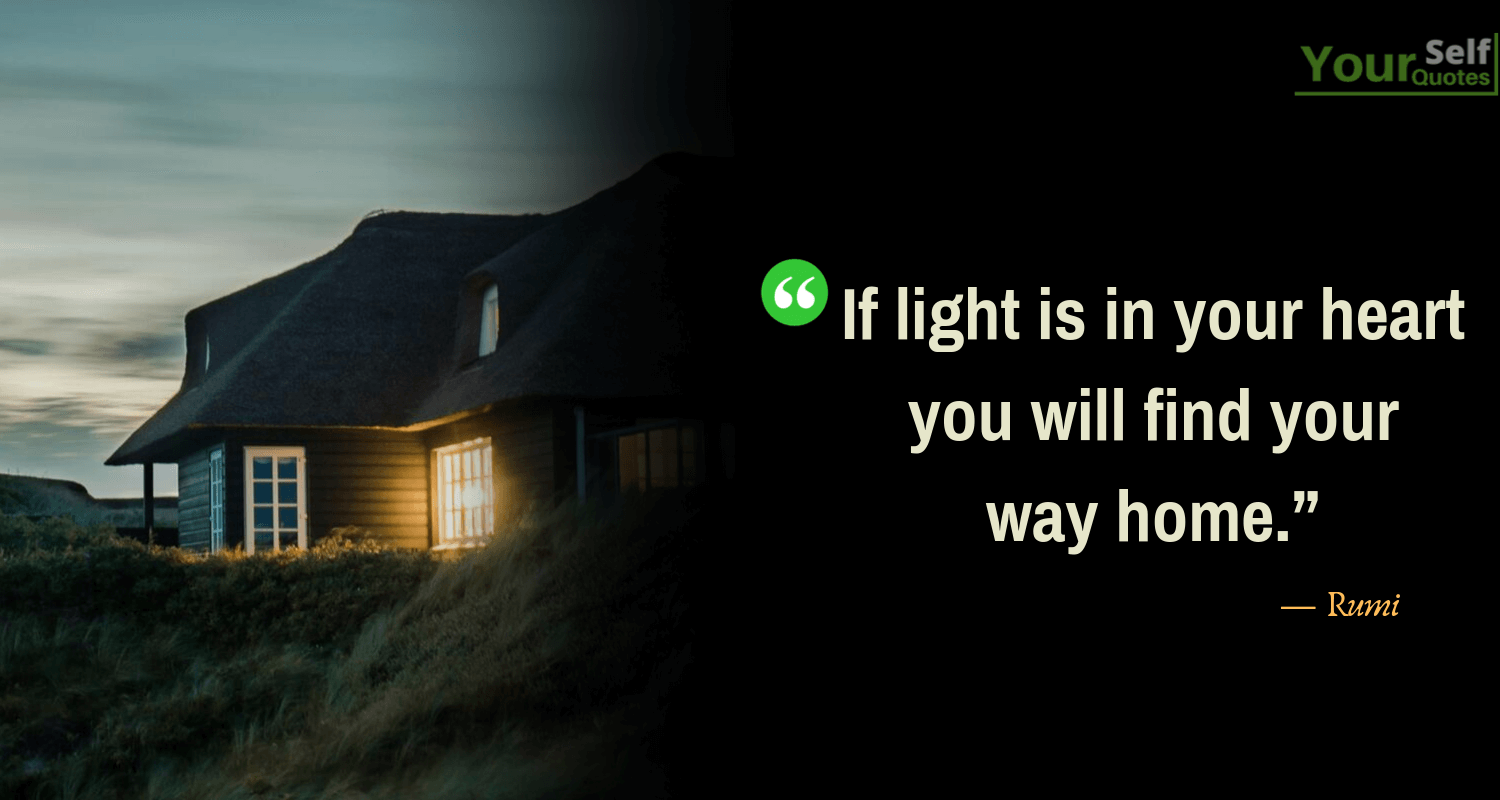 “I want to sing like the birds sing, not worrying about who hears or what they think.” — Rumi 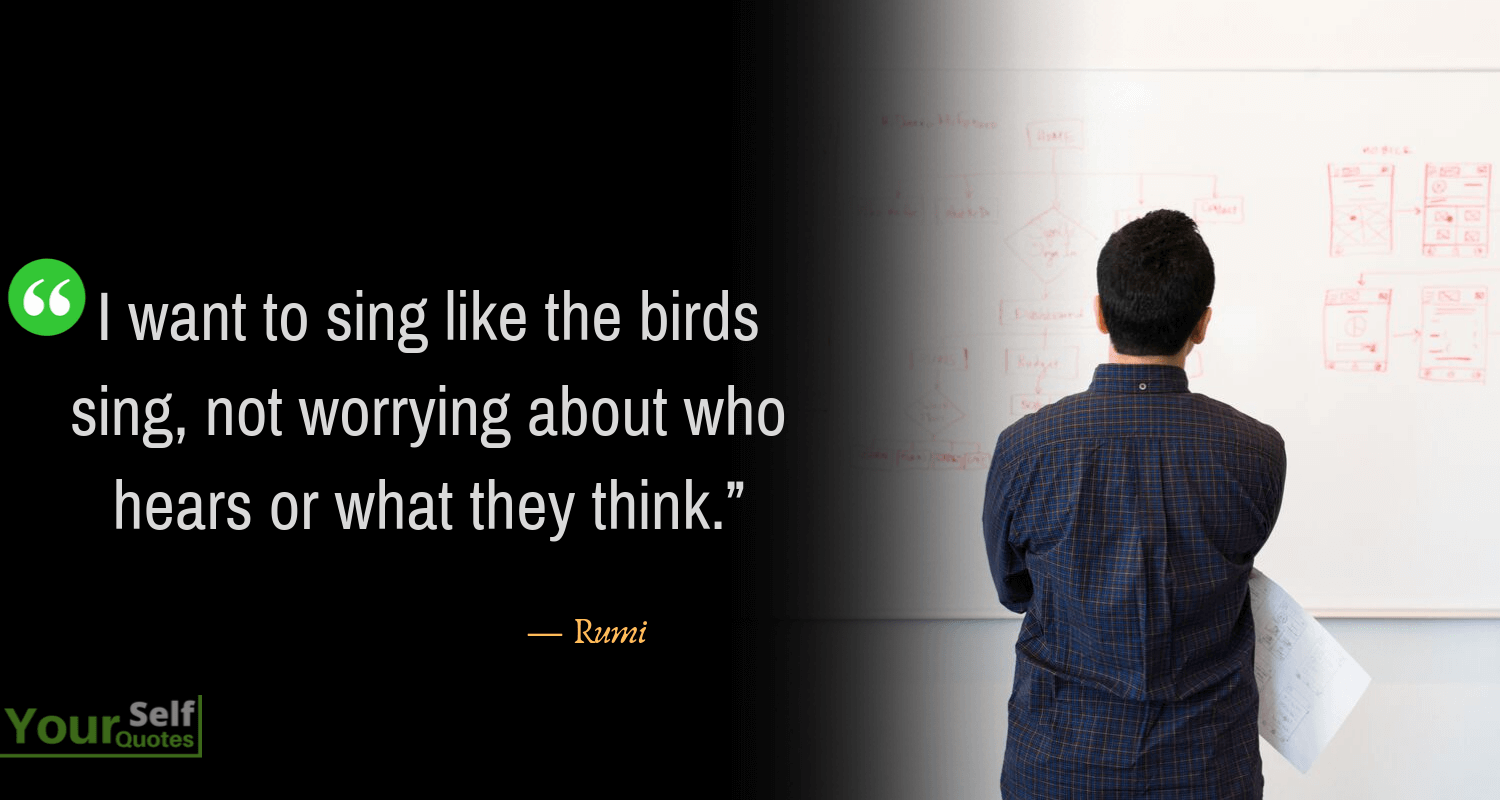 “If you are irritated by every rub, how will your mirror be polished?” — Rumi 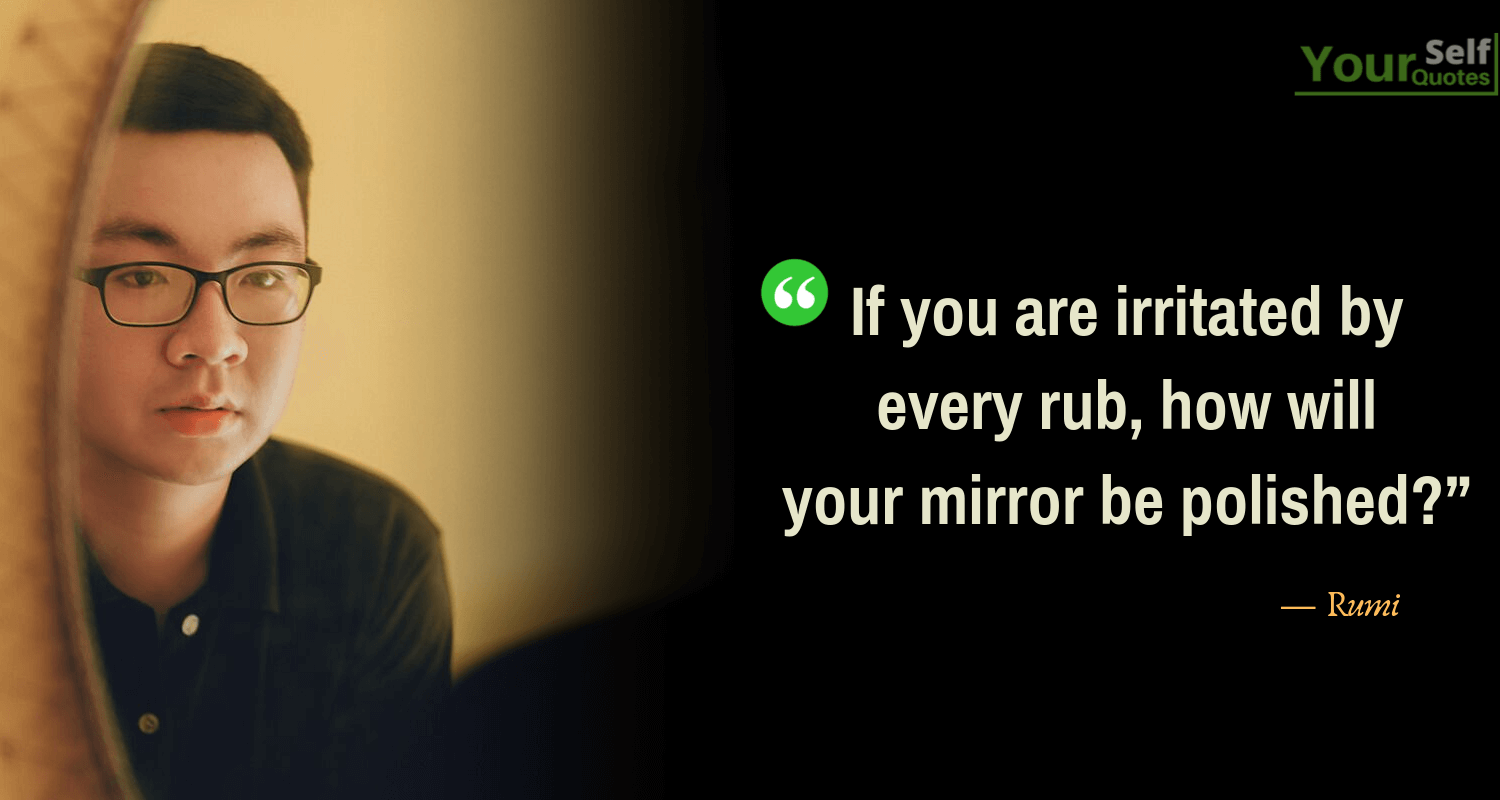 “Be quiet now and wait. It may be that the ocean one, the one we desire so to move into and become, desires us out here on land a little longer, going our sundry roads to the shore.” — Rumi

“Don’t grieve. Anything you lose comes round in another form.” — Rumi

“You are not a drop in the ocean. You are the entire ocean in a drop.” — Rumi 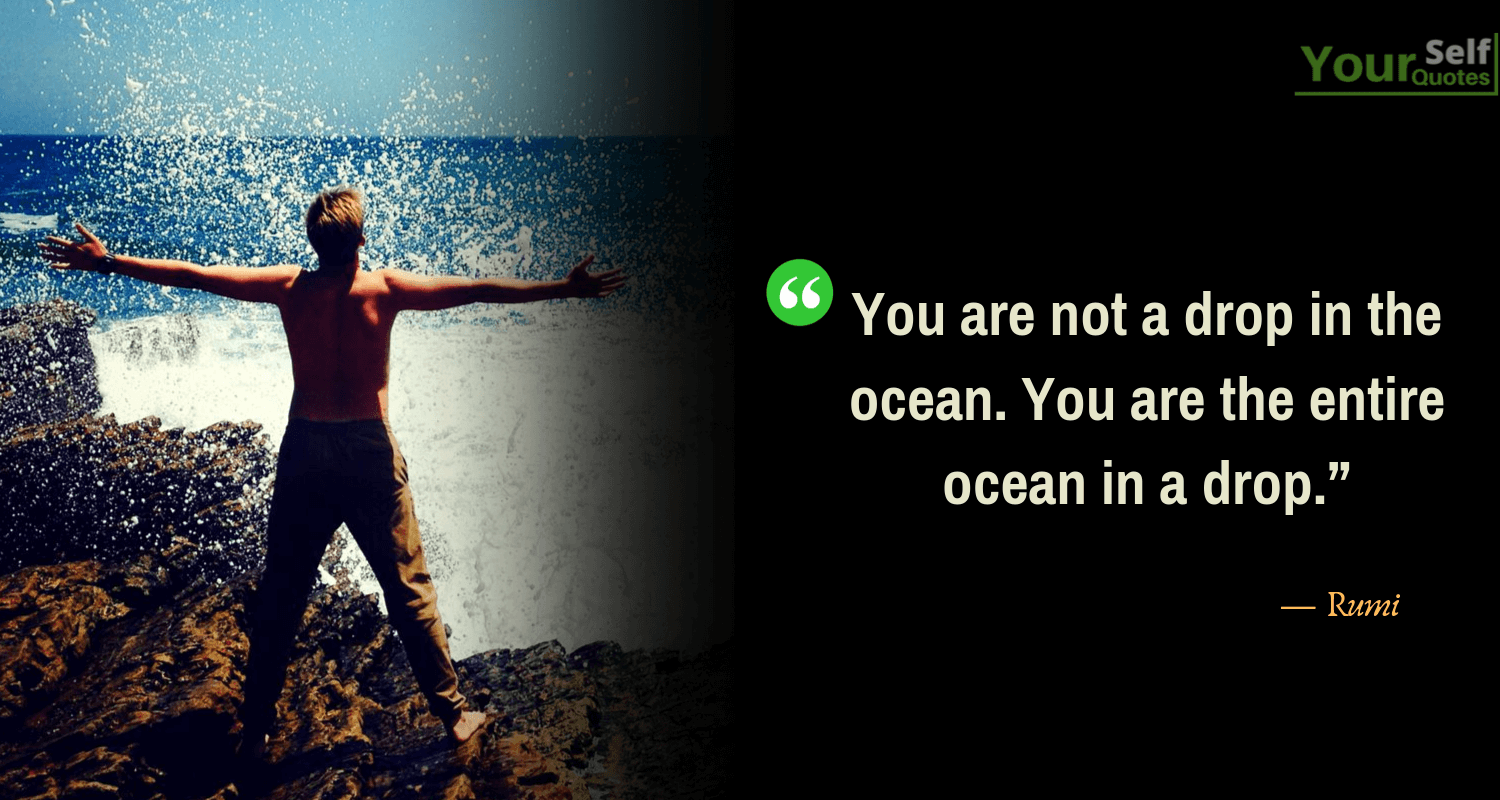 “Ignore those that make you fearful and sad.” — Rumi

“Let the beauty of what you love be what you do. There are a thousand ways to kneel and kiss the earth.” — Rumi

“Love rests on no foundation. It is an endless ocean, with no beginning or end.” — Rumi

“Raise your words, not your voice. It is rain that grows flowers, not thunder.” — Rumi

“Forget safety. Live where you fear to live. Destroy your reputation. Be notorious.” — Rumi

“Gratitude is the wine for the soul. Go on. Get drunk!” — Rumi

“For without you, I swear, the town Has become like a prison to me. Distraction and the mountain and the desert, all I desire.” — Rumi

“Once you conquer your selfish self, all your darkness will change to light.”— Rumi 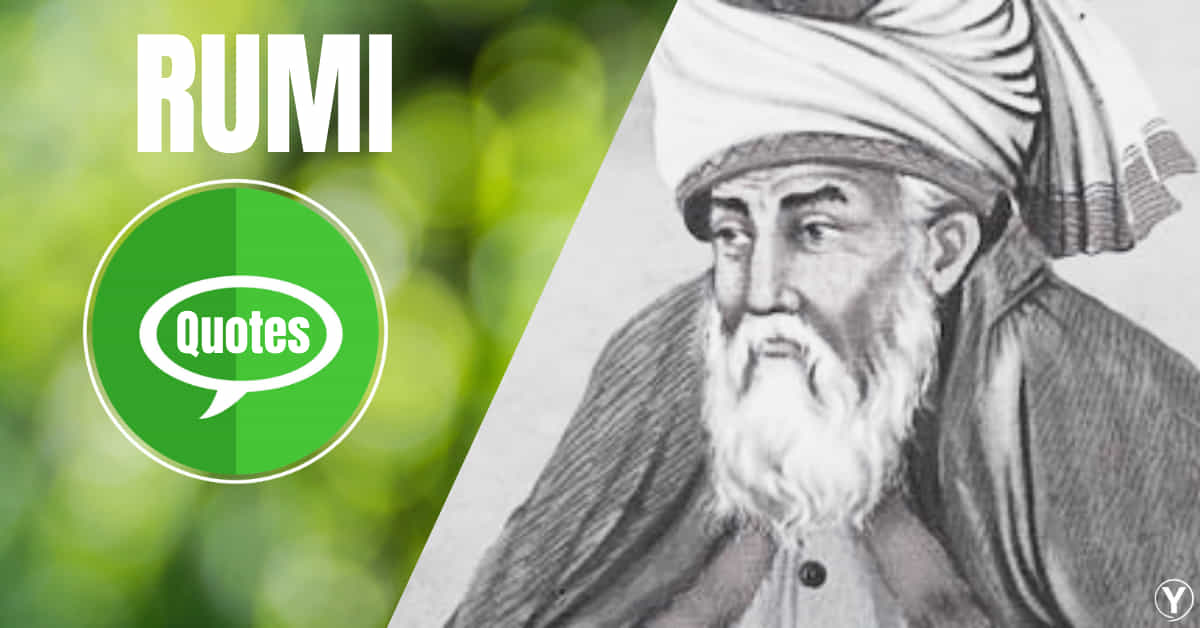 “Dance, when you’re broken open. Dance, if you’ve torn the bandage off. Dance in the middle of the fighting. Dance in your blood. Dance when you’re perfectly free.” — Rumi

“When setting out on a journey do not seek advice from someone who never left home.” — Rumi

“I belong to no religion. My religion is love. Every heart is my temple.” — Rumi

Rumi was the master of poetry. He was a great Persian poet, scholar and theologian. His life story revolved around intrigue and drama. Through his mystic poetry, he made the world re-think about the type of life we live. He explained his words and himself very wisely, friendly, and profoundly. He was the master to guide into spirituality. He is considered one of the most popular and accomplished poets of all time. The great peaceful poet died on 17th December 1273, in Konya, present-day Turkey.

Hope you are amused by knowing about this great personality of history. If yes, then do share these Rumi Quote Images with your family, friends, and loved ones for inner peace and love.

Harriet Tubman Quotes To Turn Yourself Into A Leader