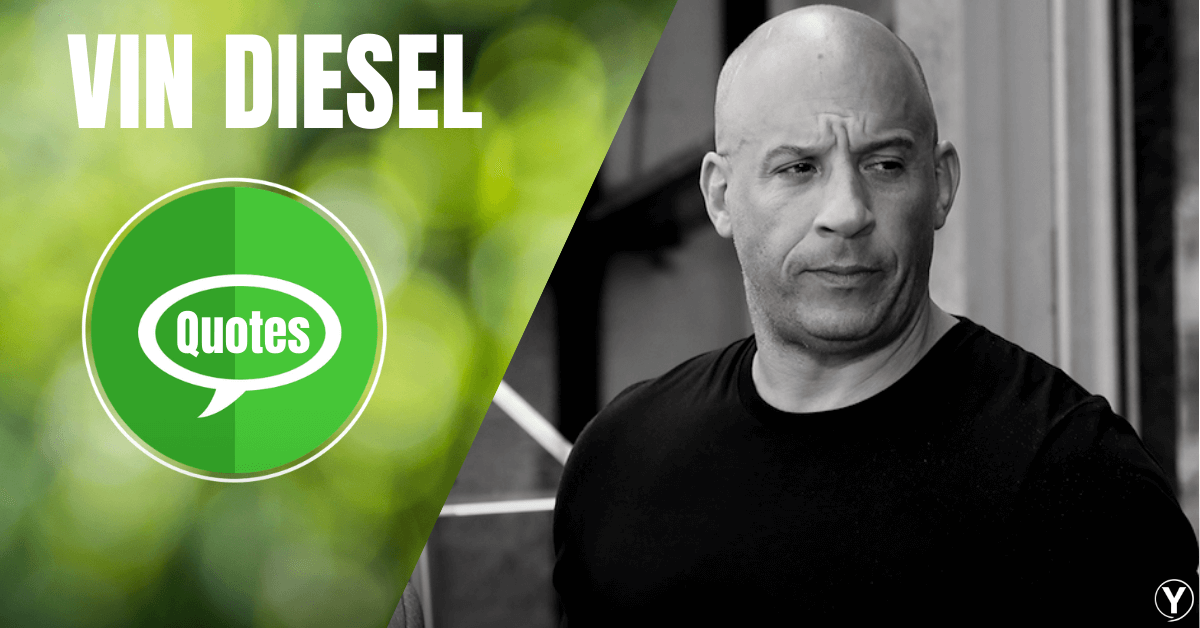 Vin Diesel’s original name Mark Sinclair is a stunning American actor, producer, director, and screenwriter. He gained popularization and fame from his dynamic role in the movie The Fast and the Furious.

Vin was born on 18th July 1967 in Alameda County, California. Vin was born to Delora Sherleen (Sinclair) Vincent who was an astrologer. The name of his biological father is suspicious as he never met him.

Vin made his stage debut at a very early age of just 7 years in the children’s play, Dinosaur Door, written by Barbara Garson. In 1990, he got his first film role in the drama film Awakenings. And in the year 1994, he himself wrote, directed, produced, and starred in the short drama film Multi-facial. This was a semi-autobiographical film that follows a struggling multiracial actor stuck in the audition process.

In 1997, He made his first feature-length film, Strays. This was an urban drama in which he played a gang leader whose love for a woman inspires him to try to change his ways. Diesel got a reprised role as Dominic Loretto in installments five through eight of The Fast and the Furious franchise, Fast Five (2011), Fast & Furious 6 (2013), Furious 7 (2015), and The Fate of the Furious (2017).

Diesel is well recognized because of his deep voice. He is married to Mexican model Paloma Jimenez. They are blessed with three children, daughters Hania Riley and Pauline, and a son Vincent Sinclair.

Vin Diesel is a very attractive and daring personality. Lots and lots of people are huge fans of this great actor. SO let’s explore some of the best Vin Diesel Quotes.

“When people believe in you, you can do miraculous things.” — Vin Diesel 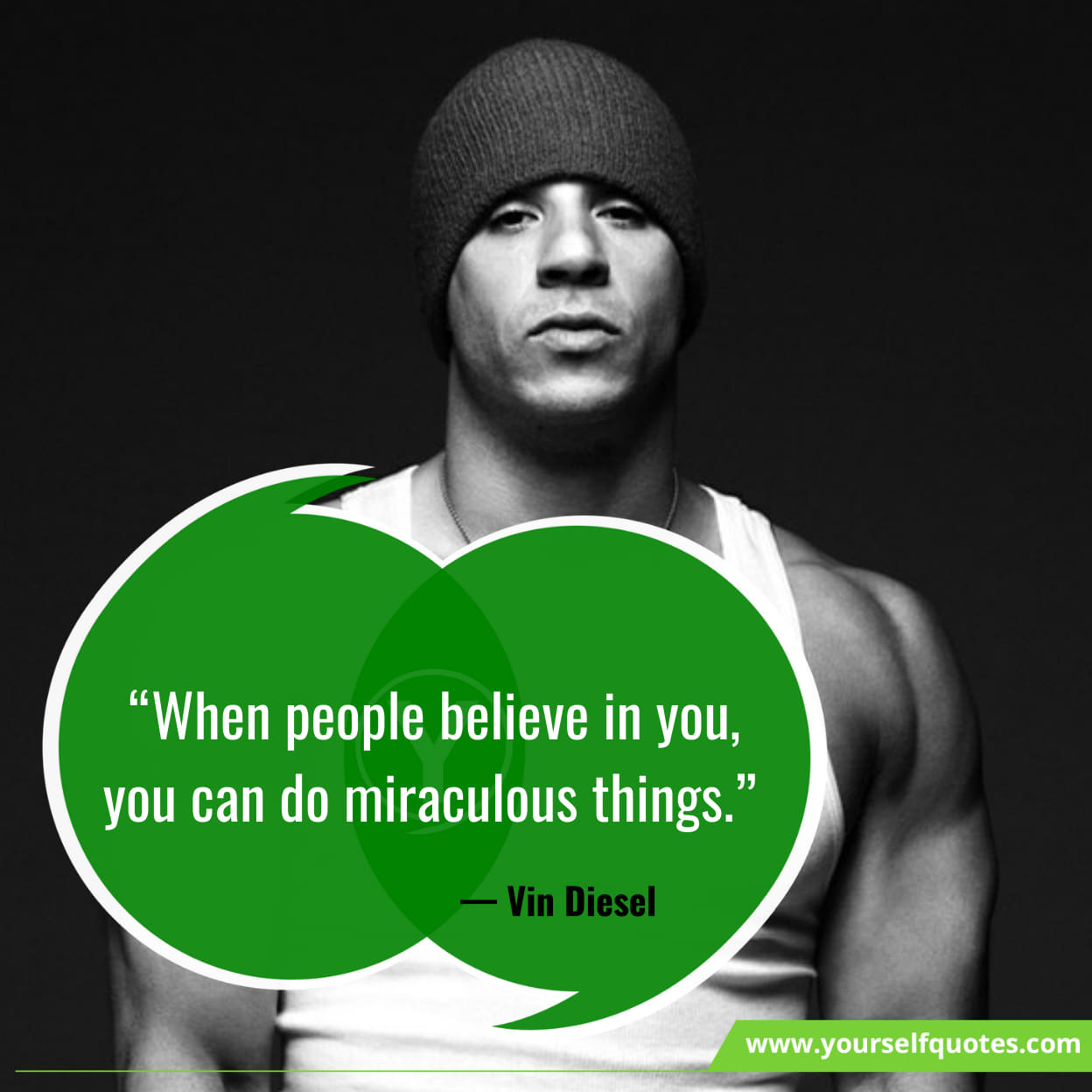 “If Clark Gable had a Facebook page, there would have been a Gone with the Wind 2.” — Vin Diesel

“You make movies for the people. If critics happen to like them too, well, that’s a home run.” — Vin Diesel

“Find your confidence, lead with love… the rest will follow.” — Vin Diesel

“We all deal with being unfairly judged.” — Vin Diesel

“It’s insecurity that is always chasing you and standing in the way of your dreams.” — Vin Diesel

“I’m one of those boys who appreciate a fine body regardless of the make.” — Vin Diesel

“I live my life a quarter-mile at a time. Nothing else matters the mortgage, not the store, not my team, and all their bullshit. For those ten seconds or less, I’m free.” — Vin Diesel

“Yeah. Cars, boards, bikes. I like anything fast enough to do something stupid in.”— Vin Diesel

“Don’t know how many times I’ve been crossed off a list and left for dead. Guess when it first happens the day you were born, you’re going to lose count.” — Vin Diesel

“Running isn’t freedom. You should know that.” — Vin Diesel 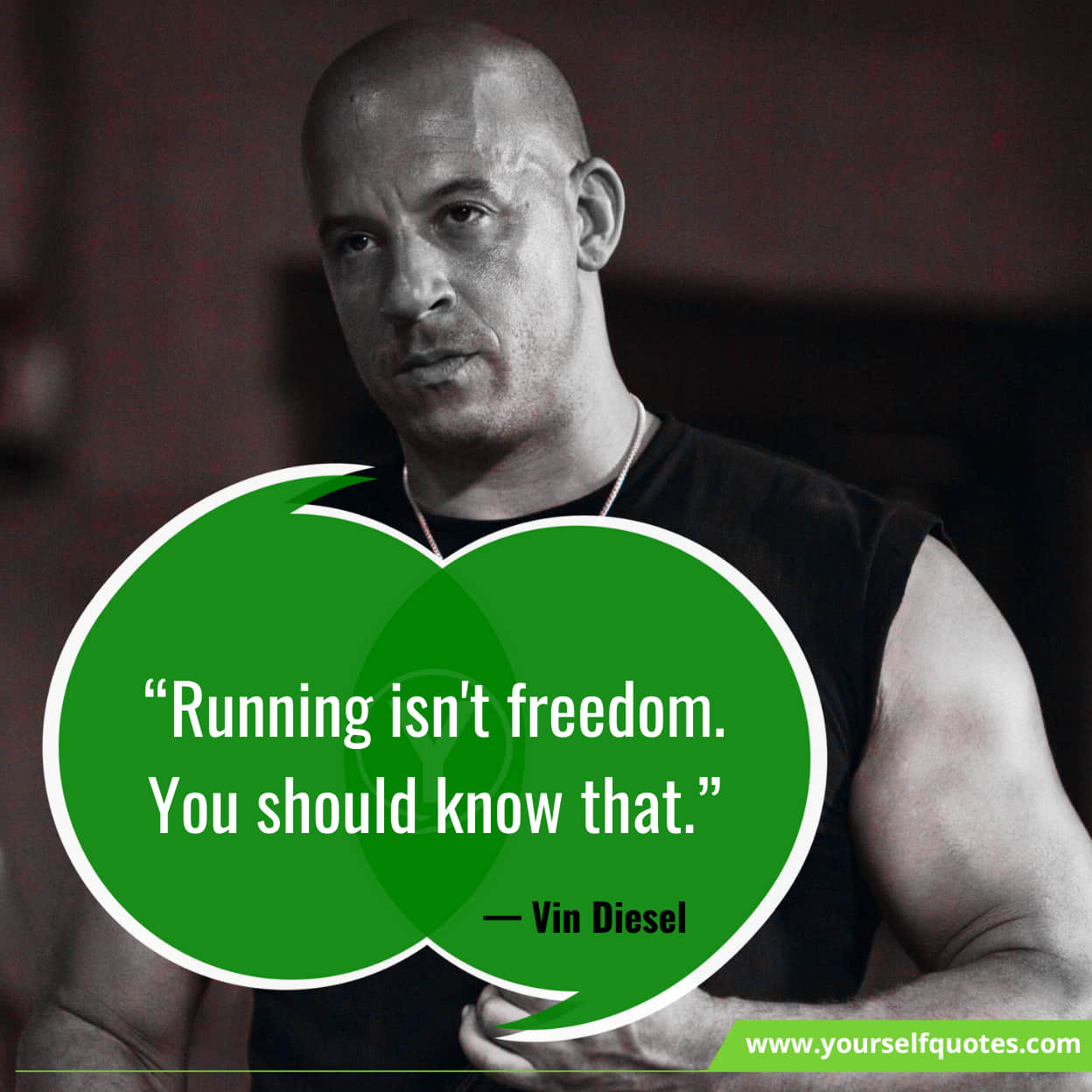 “You angels can turn hate to love, change poison into medicine and replace doubt with dreams.” — Vin Diesel

“I shaved my head about 15 years ago and the first time I shaved it, I started running my hand through my hair and it was very therapeutic.” — Vin Diesel

“You don’t turn your back on family, even when they do.” — Vin Diesel

“When you go to the movies with your whole family, it’s a different experience. For some reason, it’s something that you’re all doing together, and you take away something special in that.” — Vin Diesel

“A person in my position has to restrain himself.” — Vin Diesel 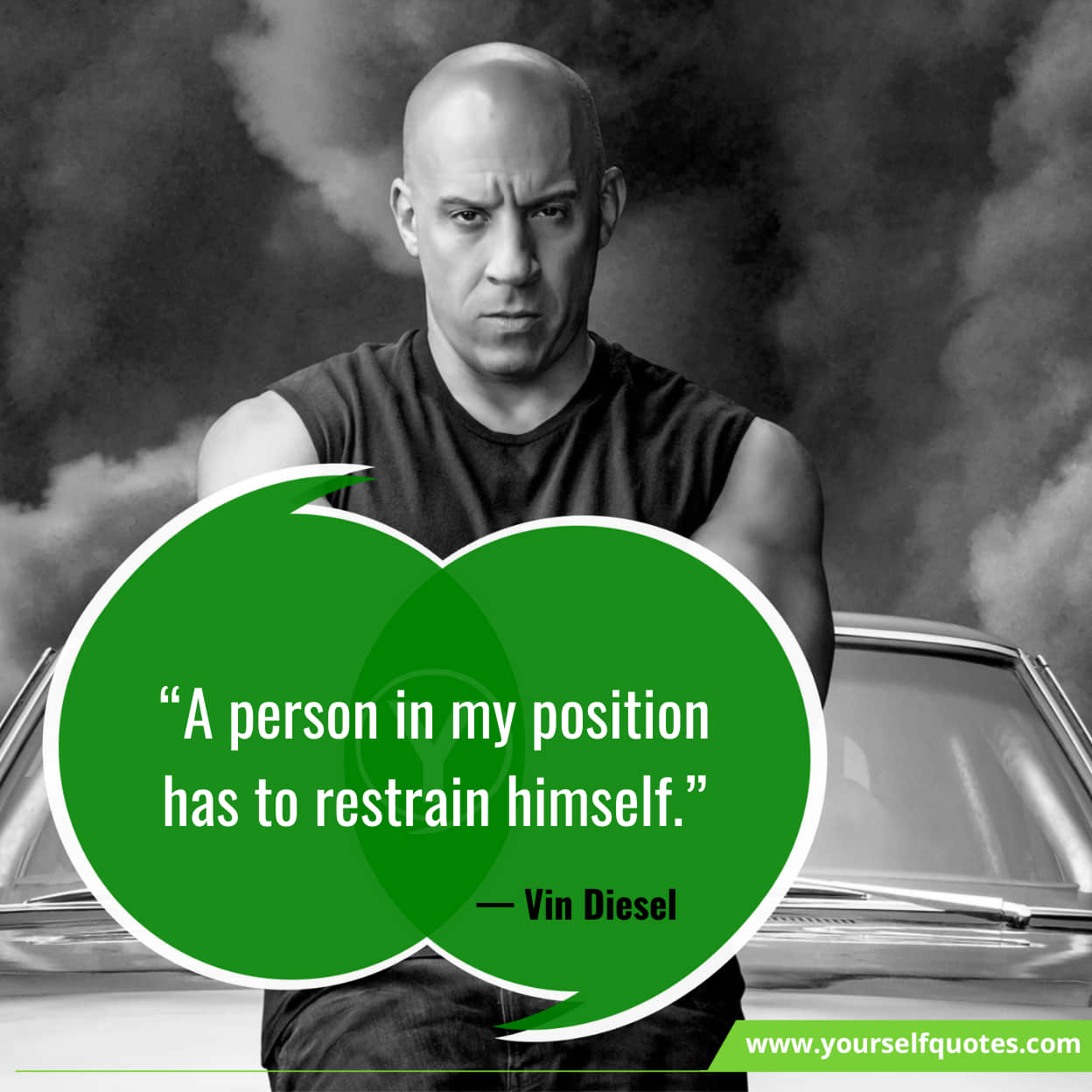 “They say the open road helps you think. About where you’ve been and where you’re going.” — Vin Diesel

“It’s insecurity that is always chasing you and standing in the way of your dreams.” — Vin Diesel

“Find your confidence, lead with love… the rest will follow.” — Vin Diesel

“Ask any racer. Any real racer. It doesn’t matter if you win by an inch or a mile. Winning’s winning.” — Vin Diesel

“The positive energy you bring here makes the world a better place, you know it.” — Vin Diesel

“The most important thing in life will always be family. The people right here, right now.” — Vin Diesel 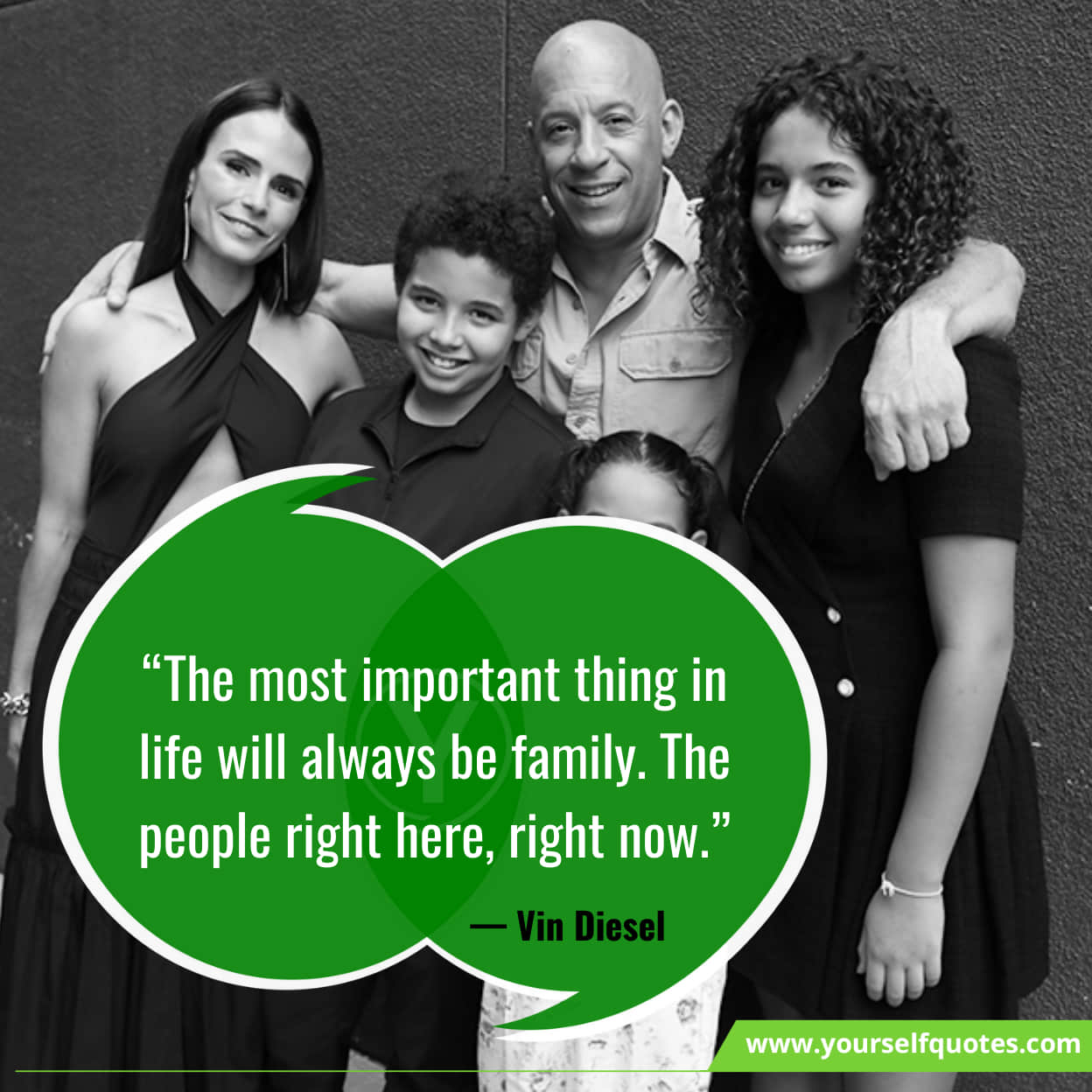 “My mother is the most supportive mother in the world, she’s magical.” — Vin Diesel/pullquote]

“You make movies for the people. If critics happen to like them too, well, that’s a home run.” — Vin Diesel

“With age, you get to a place where you don’t want to knock people out. You just want to give people a hug.” — Vin Diesel

“It doesn’t matter whether you win by an inch or a mile, winning is winning.” — Vin Diesel 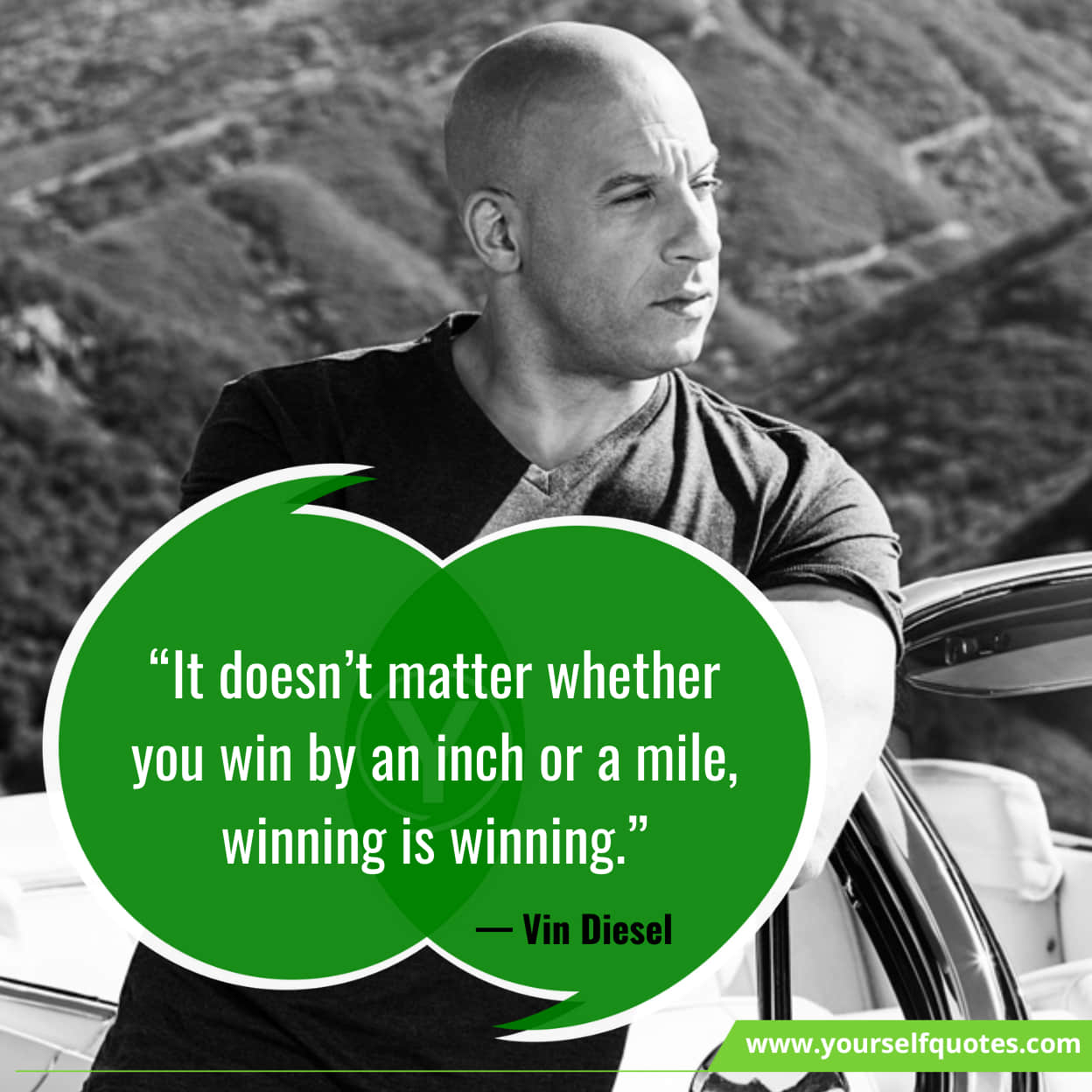 “Show me how you drive and I’ll show you who you are.” — Vin Diesel

“I love thinking about the film, the project, and committing myself as much as possible.” — Vin Diesel

“Deal-making goes on with any job.” — Vin Diesel

“I’m a boy who appreciates a good body, regardless of the make.” — Vin Diesel

“Hollywood is more concerned about its male actors being in shape than its female actors.” — Vin Diesel

“I envision the future sunny and with love, harmony, and oneness. I think Hollywood is changing.” — Vin Diesel

Vin Diesel is a marvelous and stunning, outstanding performance actor. He gained name and fame through The Fast and the Furious Series.

He is a great personality to know about. The actor has intensely expressed his love for the Dominican Republic and how he relates to its multicultural facets. He founded a production company One Race Films, which has produced a number of his star vehicles. Diesel also appeared and famed commercial success in a number of other genres, such as in the comedy film The Pacifier (2005), while his performance in Find Me Guilty (2006) was praised. He is attached to portray the comic book character Bloodshot in its film adaptation and is slated to appear in the Avatar sequels.

Vin is the best performing actor indeed. He has always proved himself by giving an outstanding performance in different movies in a different role. If you are a die-hard fan of Vin then do share these Vin Diesel Quotes Images with your loved ones.