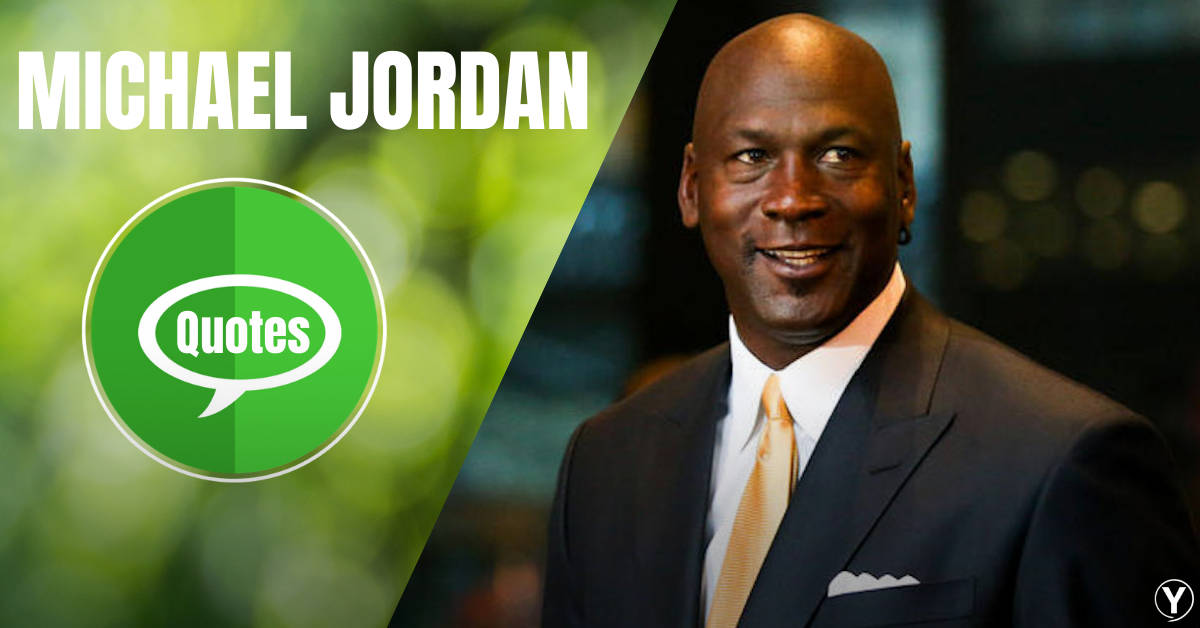 Most of the people from the world afraid to think of being a failure in life. It is a deadly thought which stops a person to dare for something. we have many persons in the history of America (USA) who beaten the failure and earned name, fame, success, and money. Today we are talking about the greatest basketball player of the all-time in the USA is Mr. Michael Jeffrey Jordan. Jordan is 6.6 feet taller player who participated in basketball, Olympic and now he is a businessman. He quoted that “I have never been afraid to fail”. This is the mantra of his success.

Michael Jordan Basketball player was born in New York and grown up in Carolina. He is 4th son of James R. Jordan Sr and Deloris. He was a student of Emsley A. Laney High School where he has shown his interest in many games like football, baseball, basketball, etc. later he chose basketball in the school day that time his height was too short for this. But in a few months, he grown up and did very hard work in the training of the game and won many matches at the school level. He proved himself by his excellent game which had reflected his potential, dedication, and a belief system to win.

He dominated the world in the 80s to 90s with his extraordinary game and has played much to increase the status of the sports. NBA has considered the greatest all-time sports personality in the USA, won Chicago bulls, six NBA titles of basketball, and the gold medals in the Olympic. He has scored 32292 points throughout his career of basketball and received an SG position.

In a speech session of some company he told that “I can’t accept failure in life, some people are a failure at some point of time in life, but I can’t accept not trying to make better”. Michael Jordan’s Net Worth is more than 1 billion today. He earned from NBA and sponsors.

Michael Jordan has two sons and one daughter from his first wife Juanita Vanoy, he married her in 1989 and the marriage has ended after 17 years of long relationship mutually due to some personal issue. Again, he married Yvette Prieto in 2013. She was a Cuban & American model, and now a mother of two daughters. 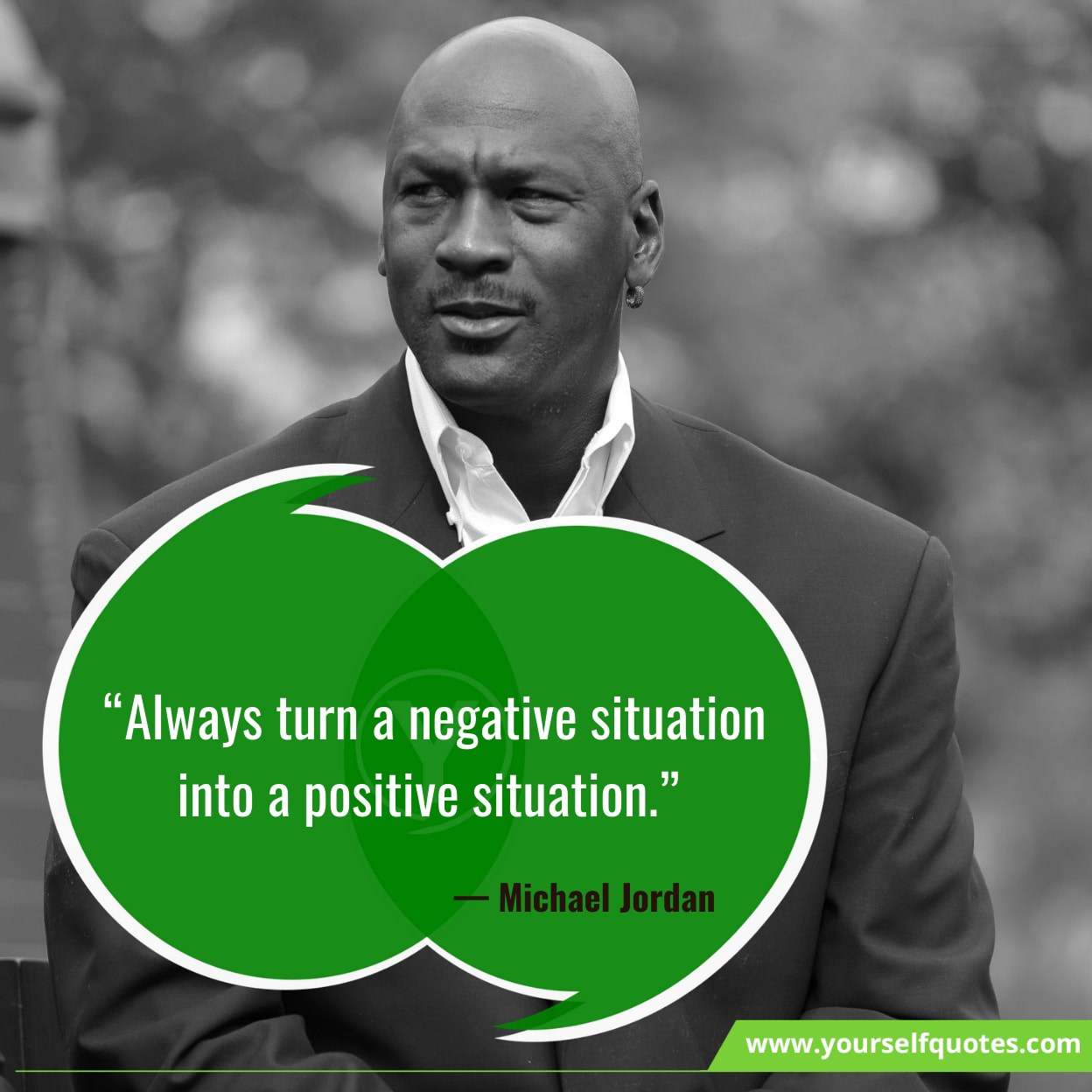 “I believe greatness is an evolutionary process that changes and evolves from era to era.” — Michael Jordan

“I wasn’t really a work-conscious type of person. I was a player. I loved to play sports.” — Michael Jordan

“Some people want it to happen, some people wish it would happen, others make it happen.” — Michael Jordan

“You have to expect things of yourself before you can do them.” — Michael Jordan

“Obstacles don’t have to stop you. If you run into a wall, don’t turn around and give up. Figure out how to climb it, go through it, or work around it.” — Michael Jordan

“Even when I’m old and grey, I won’t be able to play it, but I’ll still love the game.”  — Michael Jordan

“If you accept the expectations of others, especially negative ones, then you will never change the outcome.” — Michael Jordan

“Another day, another opportunity to prove everyone who doubts you wrong.” ― Michael Jordan

“It’s absolutely wrong that I don’t want guys to challenge me. And the people who say that aren’t in the room.” — William Blake

“My failure gave me strength, my pain was my motivation.” — Michael Jordan 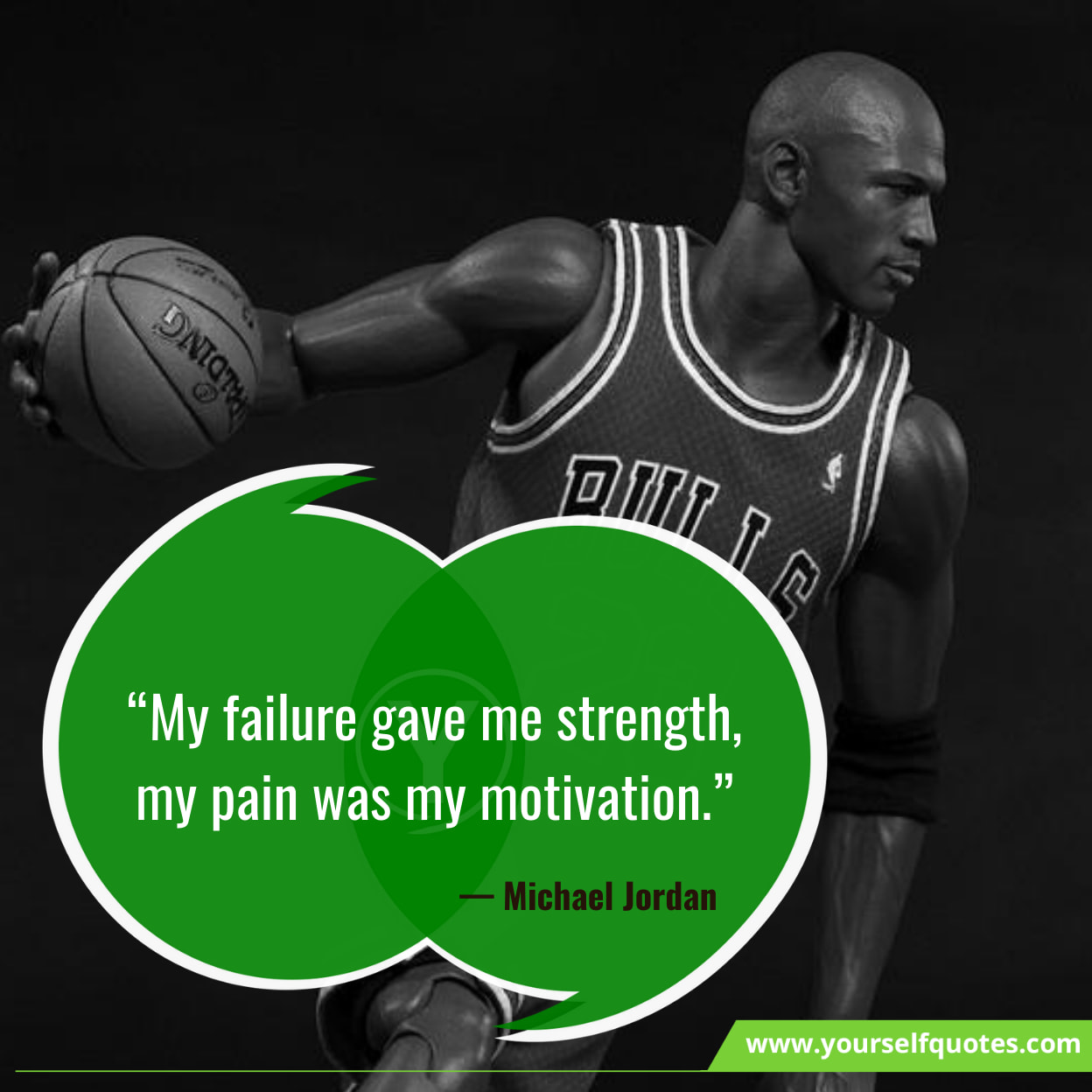 “My father used to say that it’s never too late to do anything you wanted to do. And he said, ‘You never know what you can accomplish until you try.” ― Michael Jordan

“I want to wake up every day and do whatever comes to my mind, and not feel pressure or obligations to do anything else in my life.” ― Michael Jordan

“I’ve missed more than 9000 shots in my career. I’ve lost almost 300 games. 26 times I’ve been trusted to take the game-winning shot and missed. I’ve failed over and over and over again in my life. And that is why I succeed.” ― Michael Jordan

“The best evaluation I can make of a player is to look into his eyes and see how scared they are.” — Michael Jordan

“They told me I couldn’t. That’s why I did.” — Michael Jordan 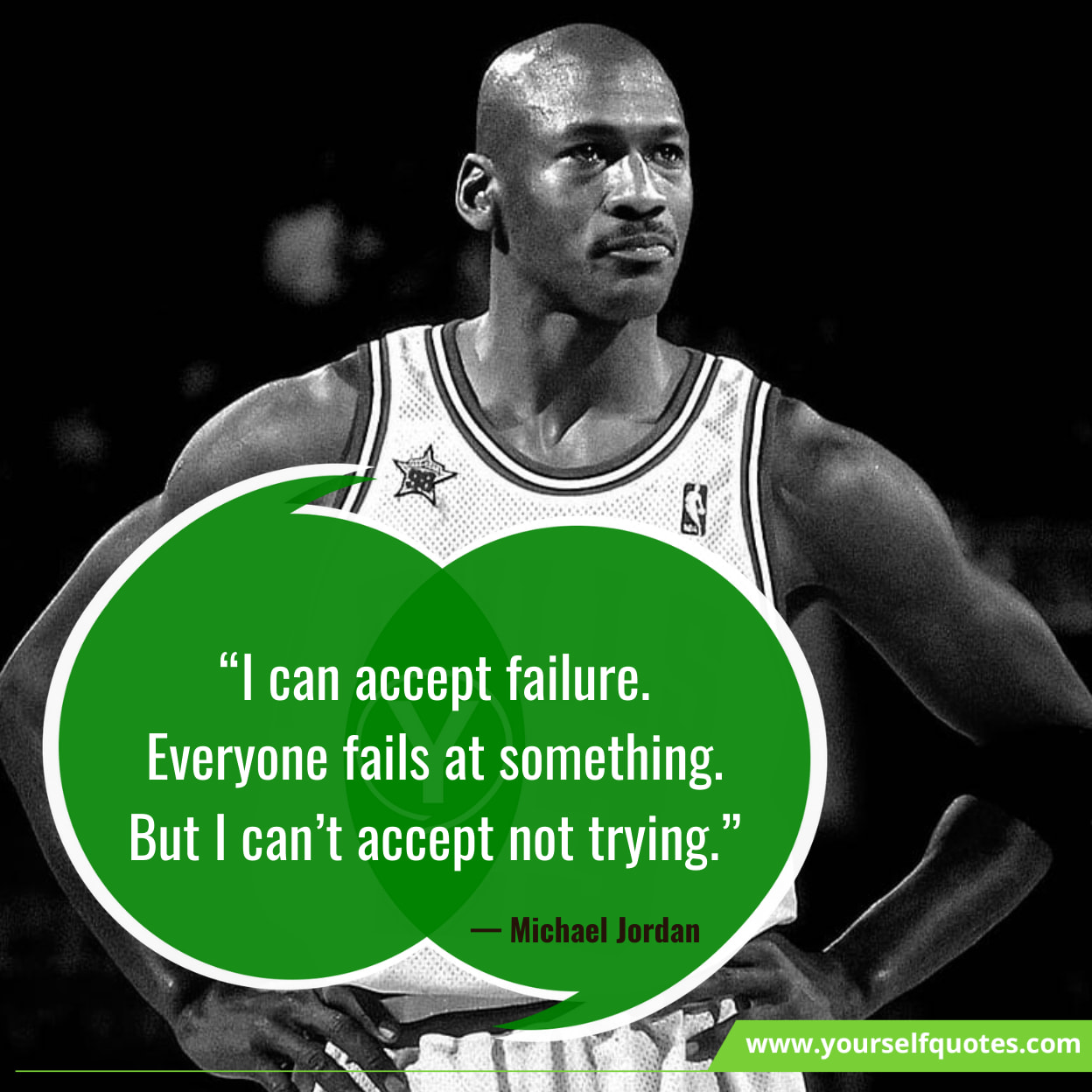 “To be successful you have to be selfish, or else you never achieve. And once you get to your highest level, then you have to be unselfish. Stay reachable. Stay in touch. Don’t isolate.” — Michael Jordan

“When I was young, I had to learn the fundamentals of basketball. You can have all the physical ability in the world, but you still have to know the fundamentals.” ― Michael Jordan

“I play to win, whether during practice or a real game. And I will not let anything get in the way of me and my competitive enthusiasm to win.” ― Michael Jordan

“I never feared my skills because I put in the work. Work ethic eliminates fear. So if you put forth the work, what are you fearing? You know what you’re capable of doing and what you’re not.” ― Michael Jordan

“I do not have a problem, I enjoy gambling, but I think people are trying to make it seem like I have a problem because people really don’t know.” ― Michael Jordan

“Don’t be afraid to try. Dreams don’t work unless you do.” — Michael Jordan 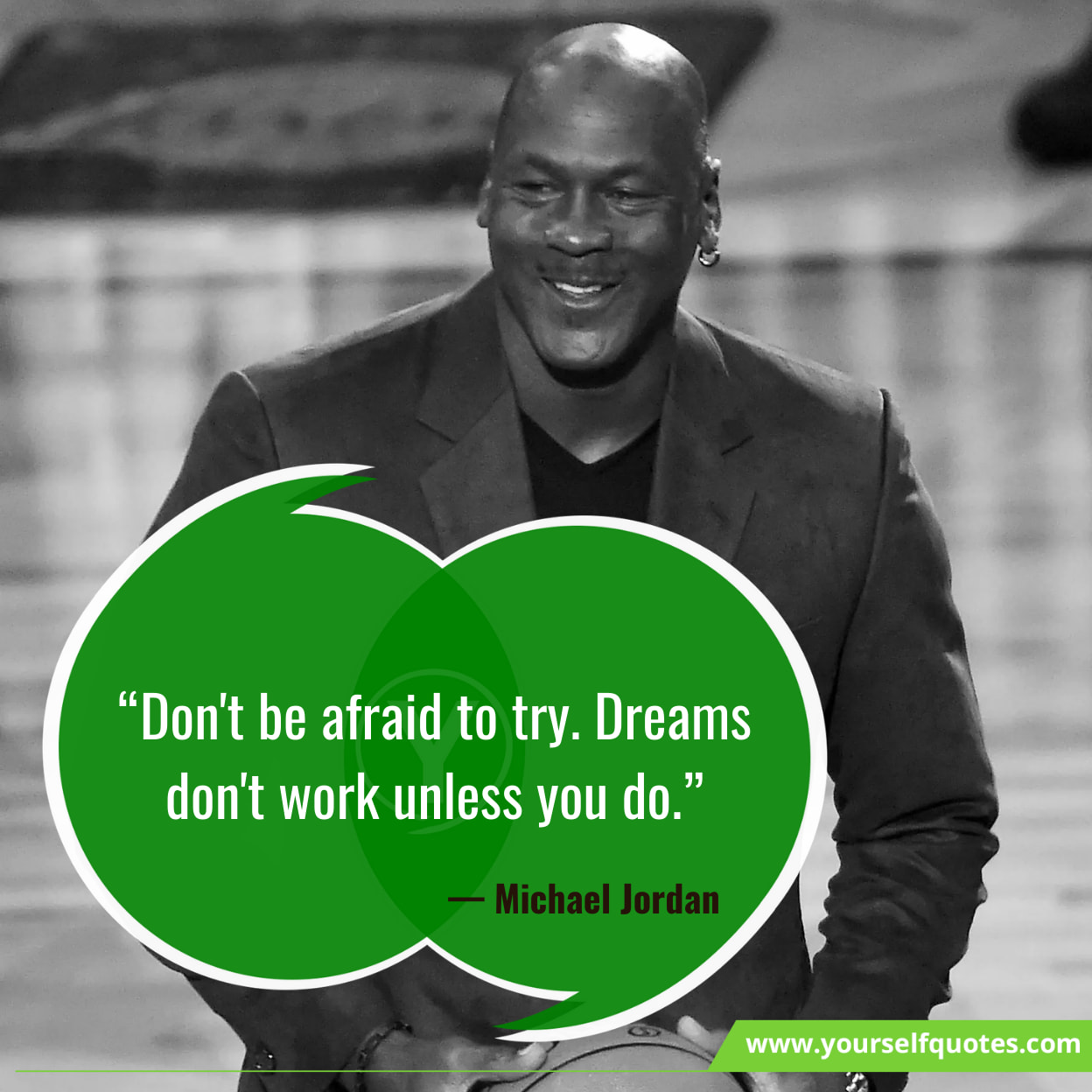 “I want to be perceived as a guy who played his best in all facets, not just scoring. A guy who loved challenges.” — Michael Jordan

“You have to expect things of yourself before you can do them.” — Michael Jordan

“If you accept the expectations of others, especially negative ones, then you never will change the outcome.” — Michael Jordan

“The good part about being famous is being able to help people. The hard part is every day you have to be in a good mood, because that is what people expect. You learn to get good at it.” — Michael Jordan

“I play to win, whether during practice or a real game. And I will not let anything get in the way of me and my competitive enthusiasm to win.” — Michael Jordan

“Sometimes, things may not go your way, but the effort should be there every single night.” — Michael Jordan

“If you quit once it becomes a habit. Never quit!.” — Michael Jordan

“Sometimes you need to get hit in the head to realize that you’re in a fight.” — Michael Jordan

“I built my talents on the shoulders of someone else’s talent.” — Michael Jordan

“I believe greatness is an evolutionary process that changes and evolves era to era.” — Michael Jordan

“In any investment, you expect to have fun and make money.” — Michael Jordan

“My heroes are and were my parents. I can’t see having anyone else as my heroes.” — Michael Jordan

“I wasn’t really a work-conscious type of person. I was a player. I loved to play sports.” — Michael Jordan

“I realize that I’m black, but I like to be viewed as a person, and this is everybody’s wish.” — Michael Jordan

“I’m not out there sweating for three hours every day just to find out what it feels like to sweat.” — Michael Jordan

“Don’t let them drag you down by rumours just go with what you believe in.” — Michael Jordan

“I can’t speak for the future. I have no crystal ball.” — Michael Jordan

“Once I made a decision, I never thought about it again.” — Michael Jordan 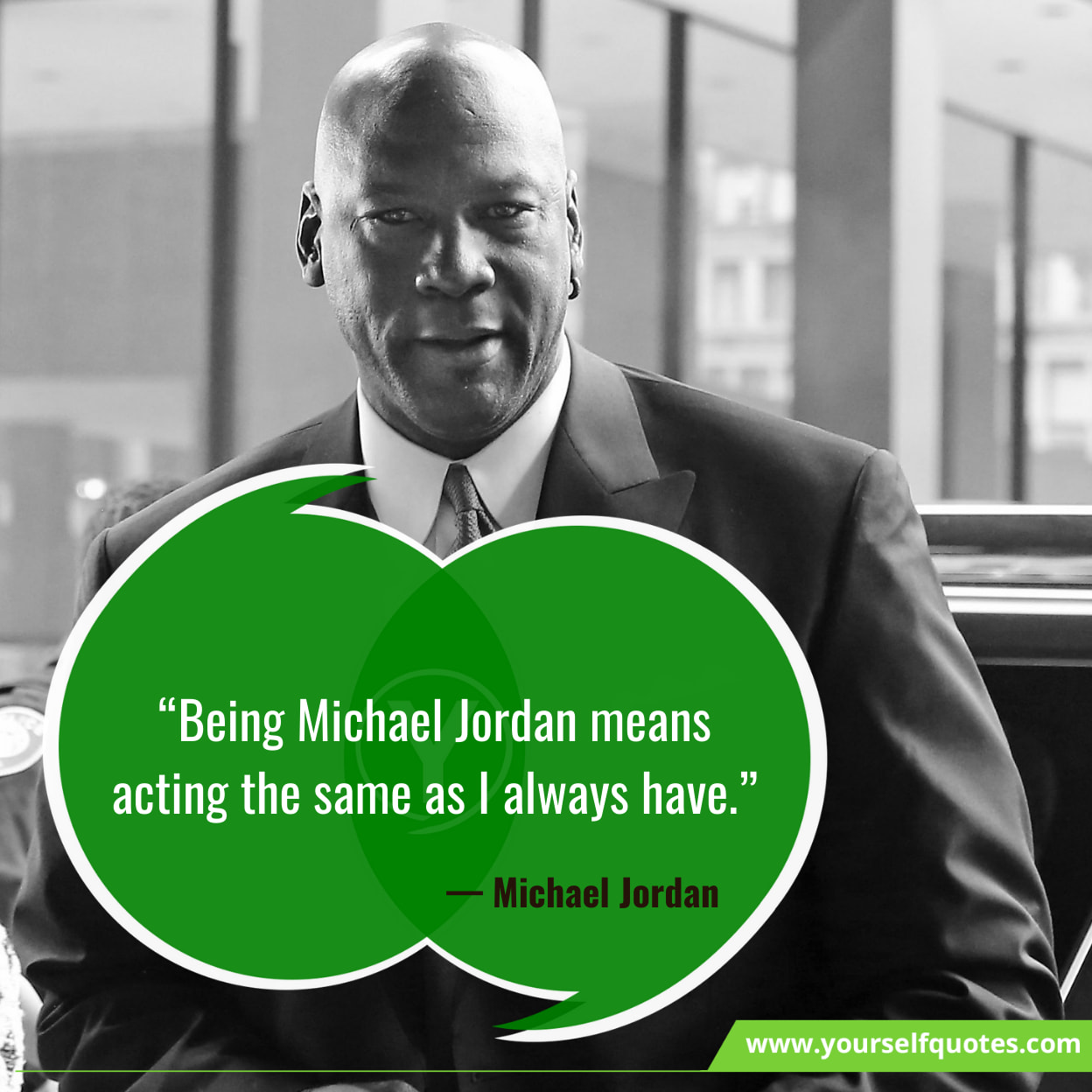 He had presented many worlds’ leading companies. Forbes magazine has ranked 20 of the most powerful sports celebrity and its estimated net worth is about $1.3 billion even after the retirement of his game.

He received many awards and honours. He was also honoured with the highest civilian award Presidential Medal of Freedom by the president of the United State of America.

Michael Jordan, is one of the greatest athletes of all time. This legendary basketball player’s Michael Jordan Quotes Images have proved that failure is nothing. If you are getting a failure every time, then you have to understand that your attempt is under the learning level and you must have to run the extra mile to turn your failure into success.

Dear reader, please write your opinion in the comment box below about Michael Jordan and tell us how are you chase the dream?

Which are your favorite Michael Jordan Quotes? Leave a comment below.

Meditation Quotes That Will Grant You Peace Of Mind