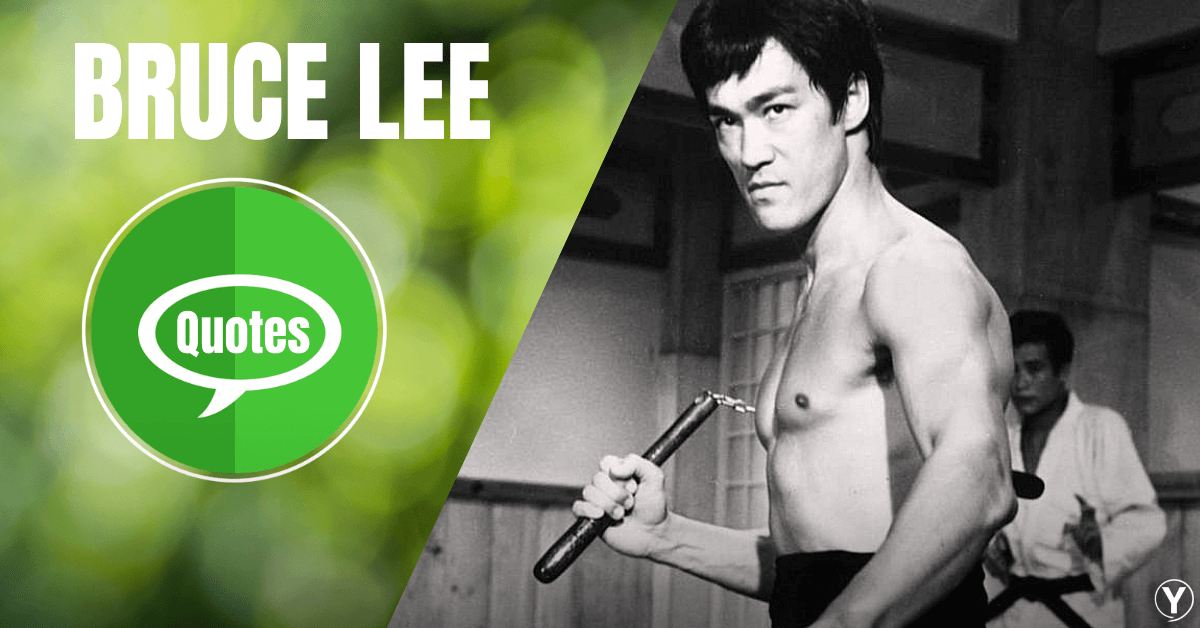 Think…. Are you only 32 years enough to be a successful person in life for a boy?

You might think that it’s very little age to be a star in a short span of time in life. Today people are running behind the success to grab it and beat their competitors. Indeed, they have forgotten to find their closest competitor. You could be the only competitor of yourself, as you do not have to compete with others. Just look into history, you would never find the hero in real or reel life.

The man who thoughts that always be yourself and express yourself, have faith in yourself, do not go outside to find a successful personality and duplicate it. This man is Bruce Lee who is internationally known for martial arts, directing a film, acting, screenwriting, and philosophy.

Bruce Lee was born in San Francisco, US on 27th Nov. 1940. He was the fourth child of Lee Hoi-Chuen and Grace Ho. They are based in Hong Kong and returned to Hong Kong when Bruce was 3 years old. He worked in many films as a child artist as Lee Hoi-Chuen introduced him. His father was an artist in opera music and film.

He attended Tak Sun School and the primary education section of Catholic La Salle College in Hong Kong at the age of 11 years old. Due to some academic issues, He moved to St. Francis Xavier’s College in high school. On school days he was interested in doing boxing where Brother Edward was teaching boxing to the school teams. Bruce was a bright student in-game. He has shown his potential in boxing games at a school level and won the tournament of Hong Kong schools boxing “Kung Fu Fighting” in 1958 at the age of 18.

Post high school, he wanted to do graduation and continue his training in martial art in Hong Kong, but his family was not ready for it. They are very serious about him due to a complaint received from local police officers as they were caught in some fighting. 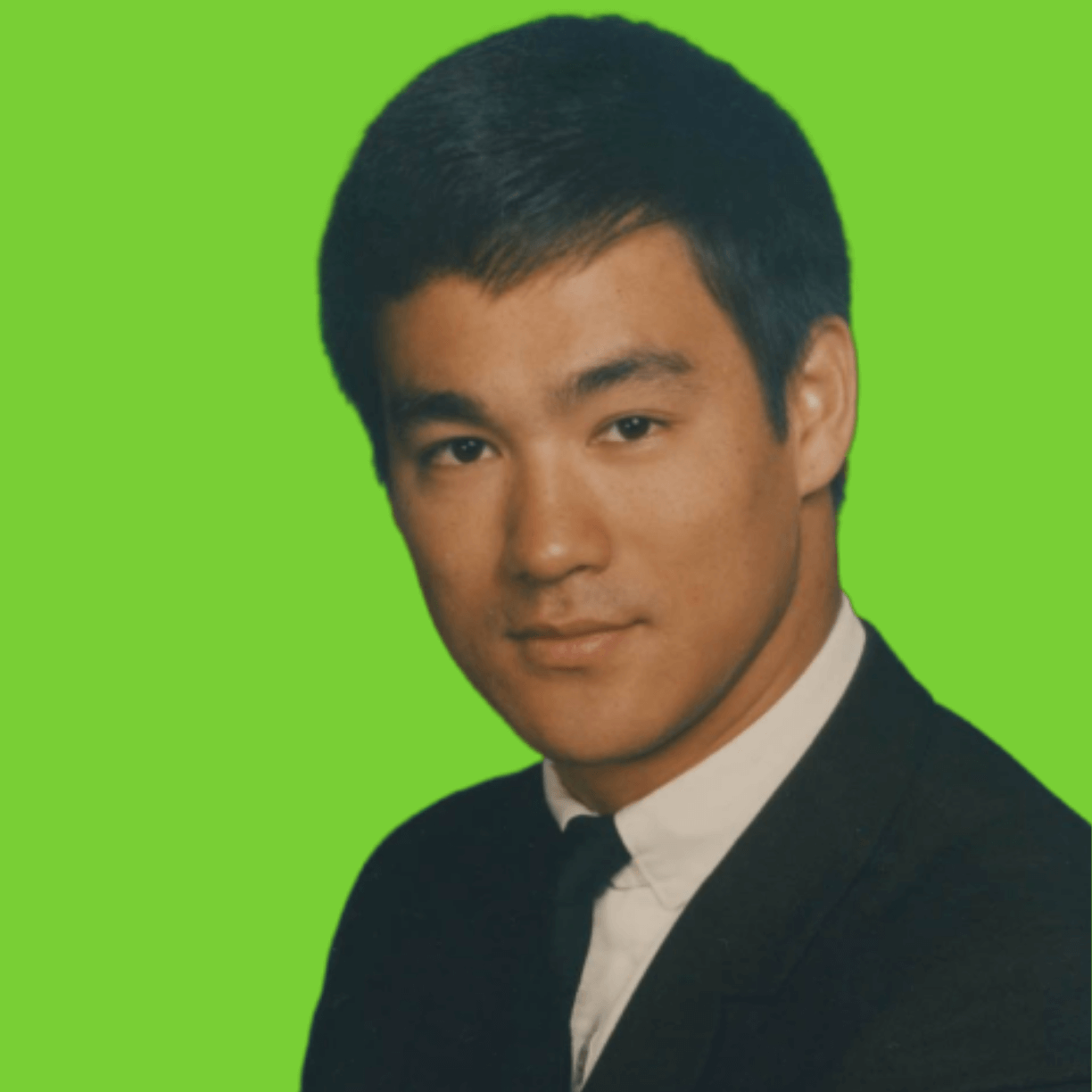 He did many films and television in his short career in life. He earned a good name and fame worldwide. Today his work has influenced millions of people. Undoubtedly, He was a superstar in Hollywood. He won the people’s hearts.

He was listed in Time Magazine among the top 100 most influential people in the world and he was voted for greatest movie fighter ever in 2014.

Now he moved to the USA and took his admission to the university to pursue his graduation. There, he was living with his elder sister and part-time started giving coaching martial art to the college students.

In University, he met Linda. She was beautiful and was his student of martial art. Later he married her. There have two children Brandon Lee (late) and Shannon Lee.

“If you think a thing is impossible, you’ll only make it impossible.”― Bruce Lee 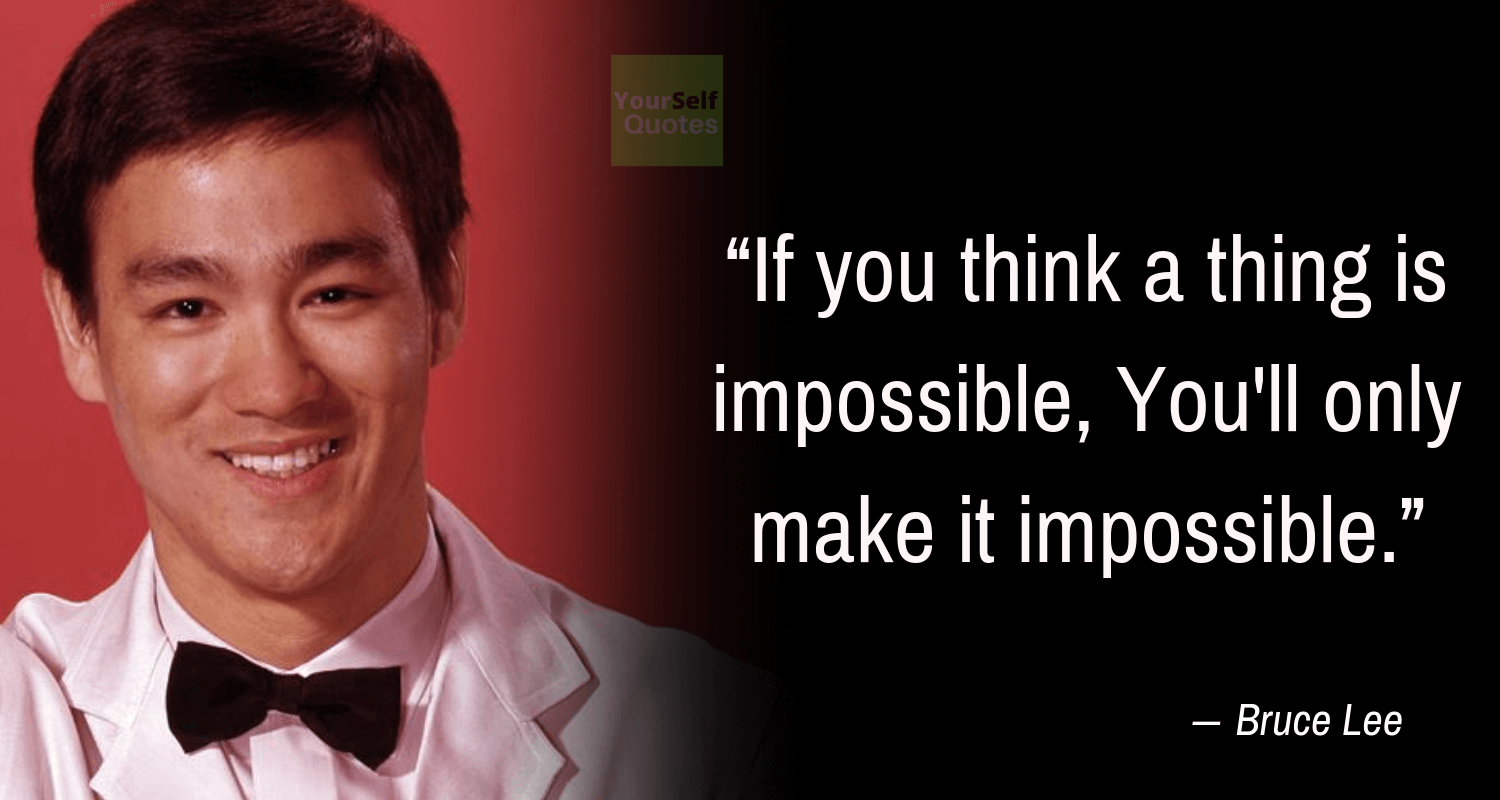 “If you love life, don’t waste time, for time is what life is made up of.” ― Bruce Lee 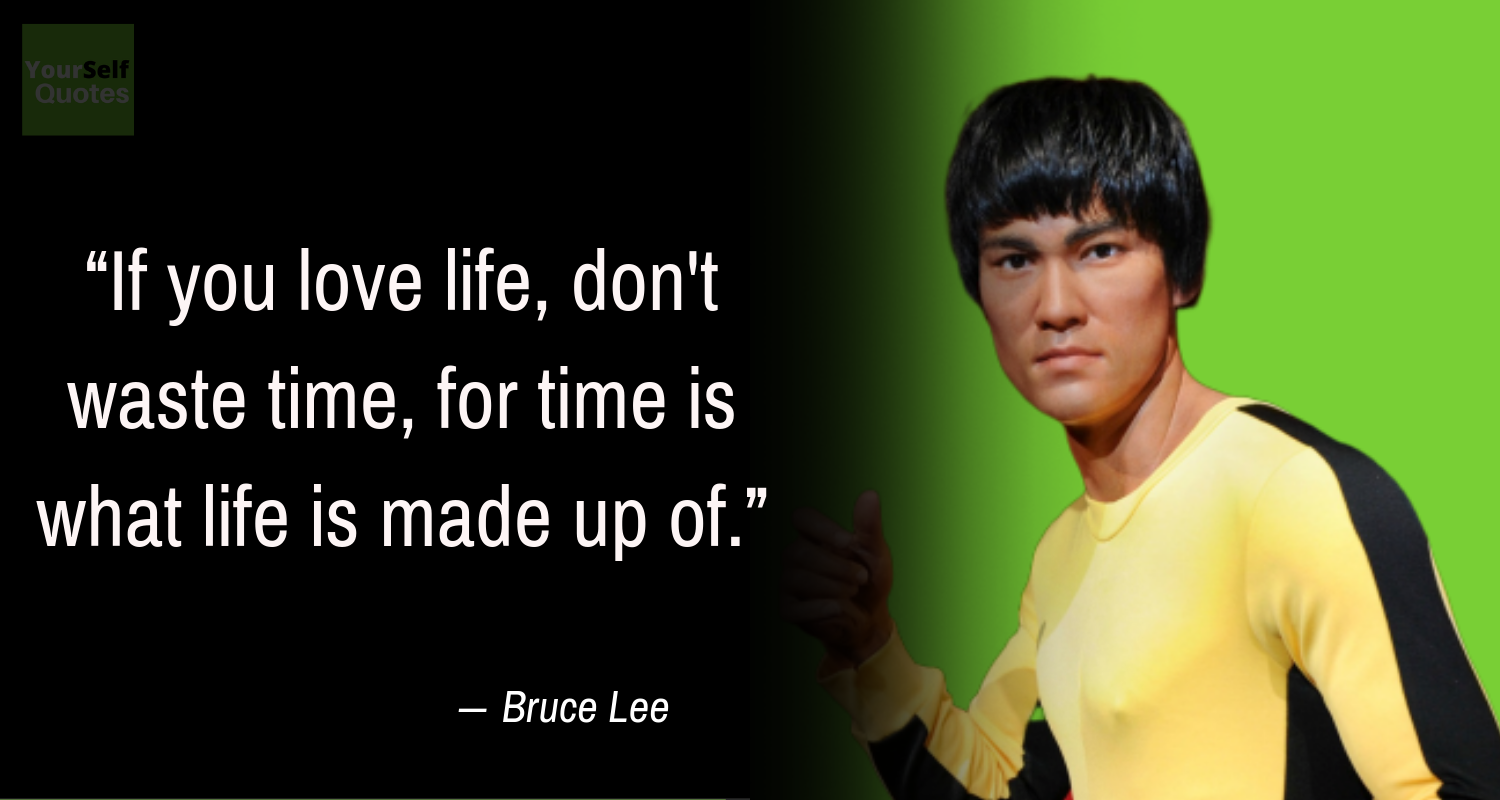 “If you spend too much time thinking about a thing, you’ll never get it done.”― Bruce Lee

“The possession of anything begins in the mind.” ― Bruce Lee 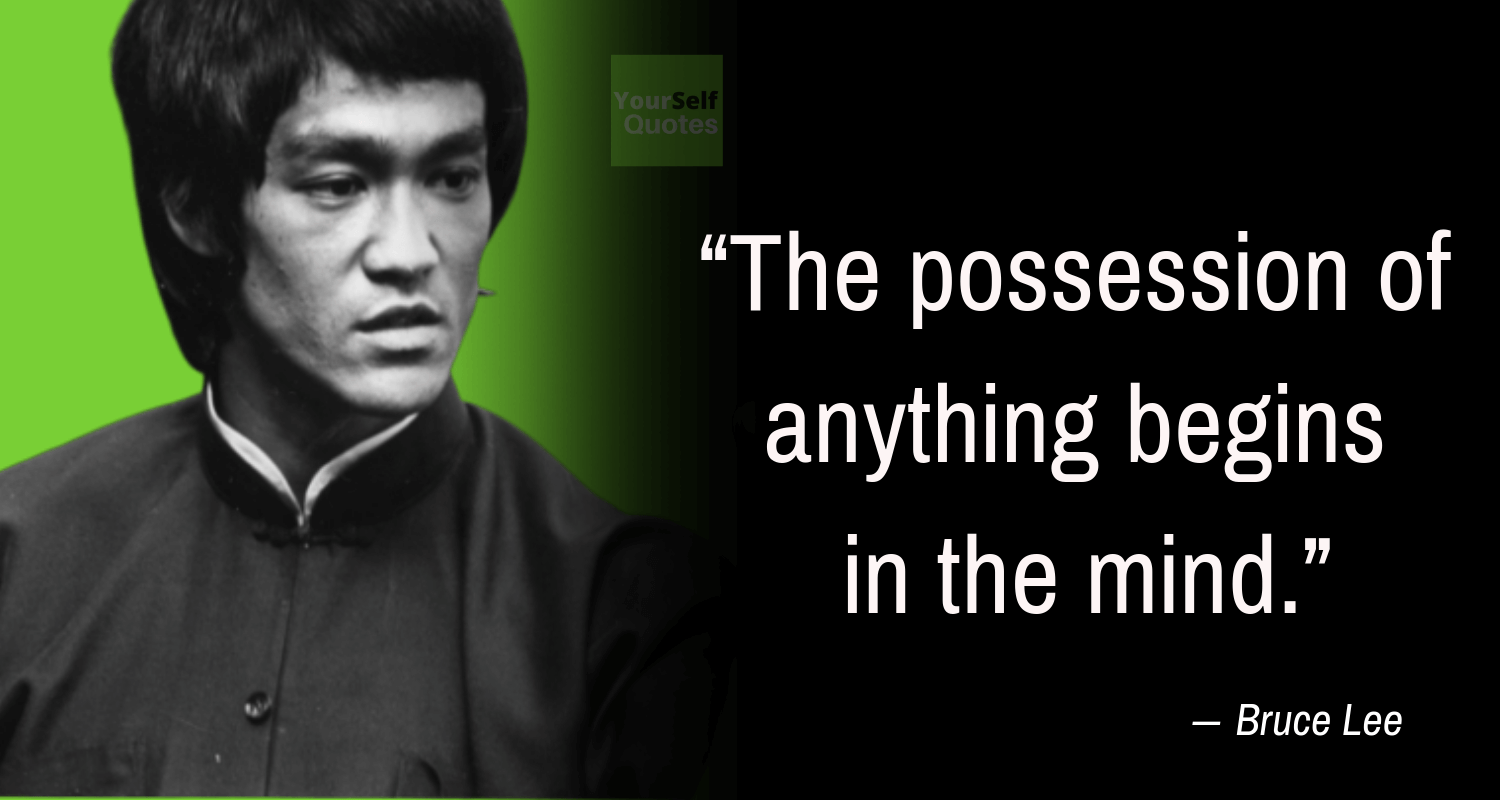 “Be yourself, everyone else is already taken.” ― Bruce Lee 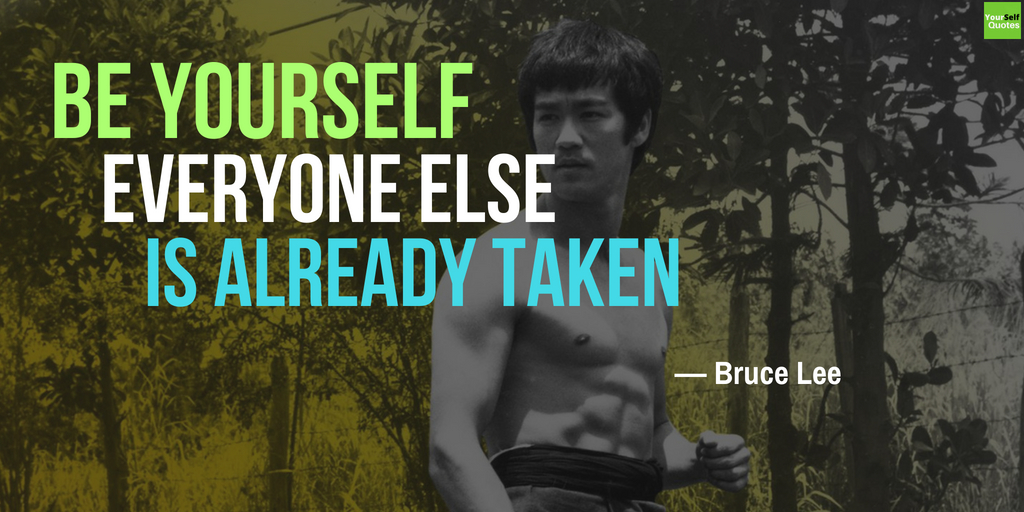 “The successful warrior is the average man with a laser-like focus. ”― Bruce Lee 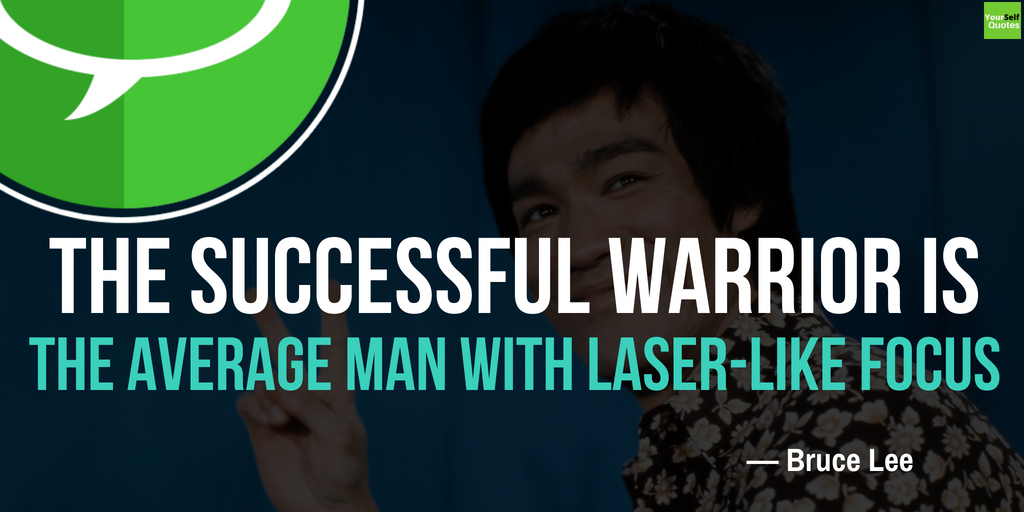 “Life is wide, limitless. There is no border, no frontier.” 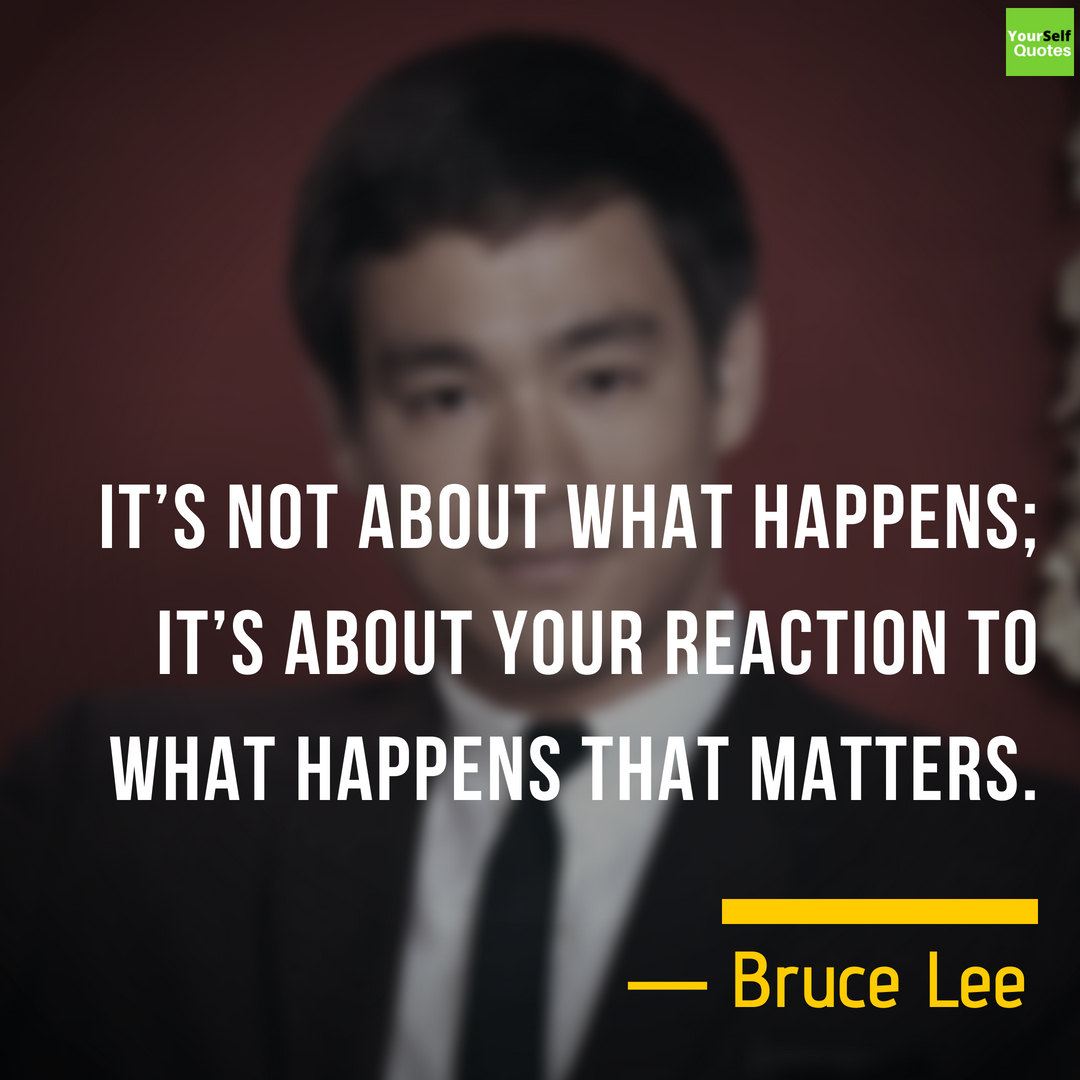 “If you don’t want to slip up tomorrow, speak the truth today.”

“To hell with circumstances. I create opportunities.” ― Bruce Lee 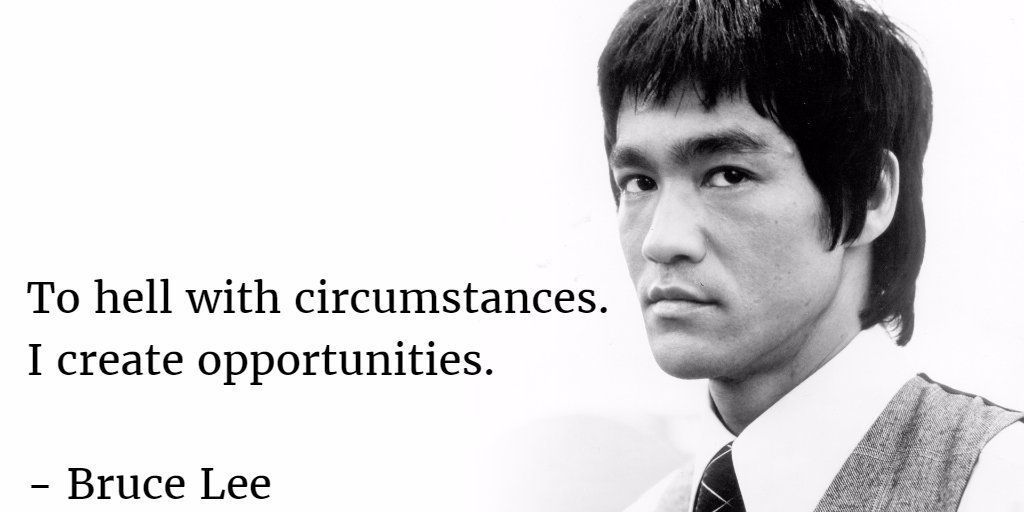 “A man is born to achieve great things if he can conquer himself. 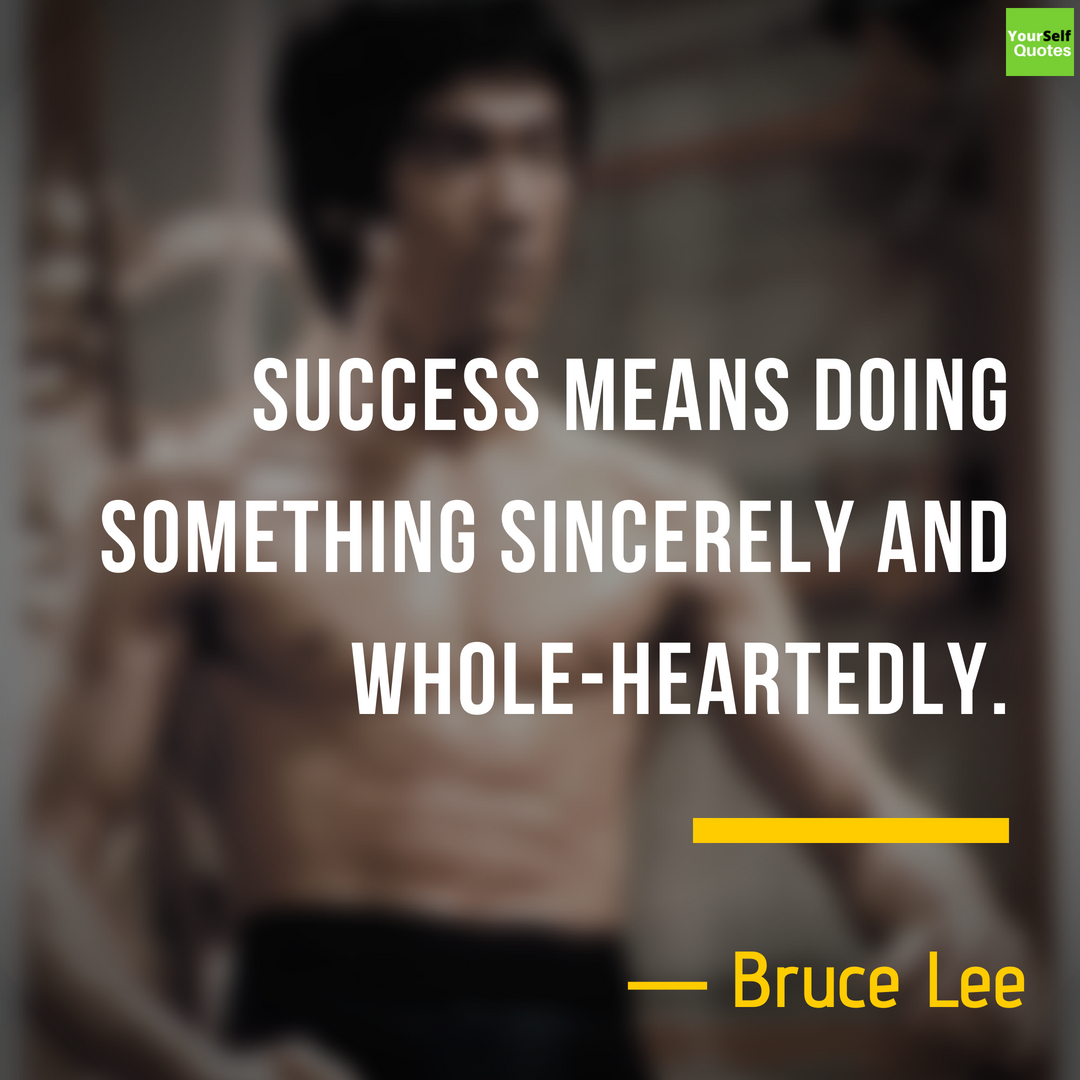 “In life what more can you ask for than to be real?” ― Bruce Lee

“It’s not the daily increase, but the daily decrease. Hack away at the unessential.”

“Today the rain is going on strong, but tomorrow, baby the sun is going to come out again. 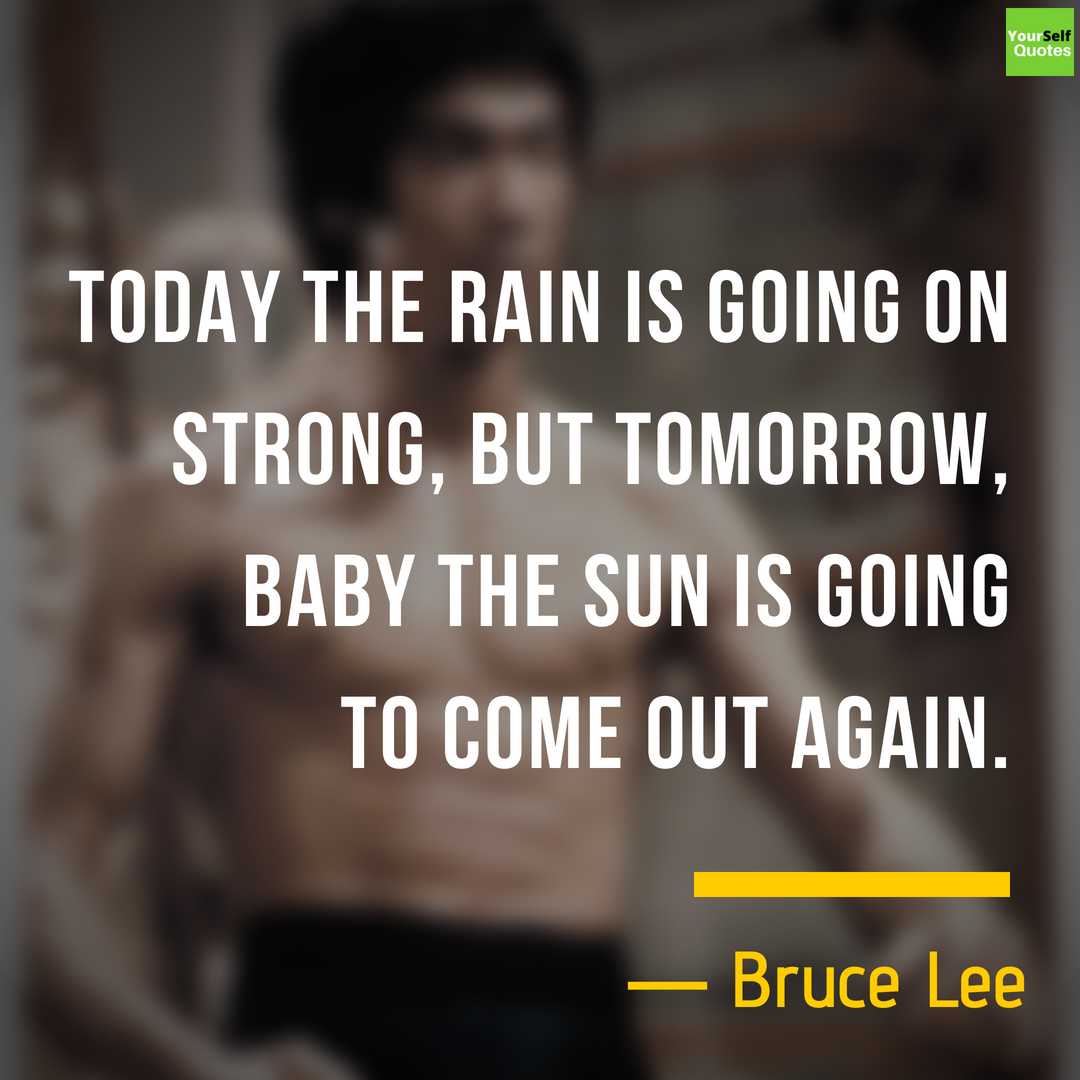 “A goal is not always meant to be reached. It often serves simply as something to aim at.” ― Bruce Lee

“Mistakes are always forgivable if one has the courage to admit them.” ― Bruce Lee

“If you truly love life, don’t waste time because time is what life is made of.” ― Bruce Lee

“The key to immortality is first living a life worth remembering.” ― Bruce Lee

“Defeat is a state of mind; no one is ever defeated until defeat has been accepted as a reality.” ― Bruce Lee 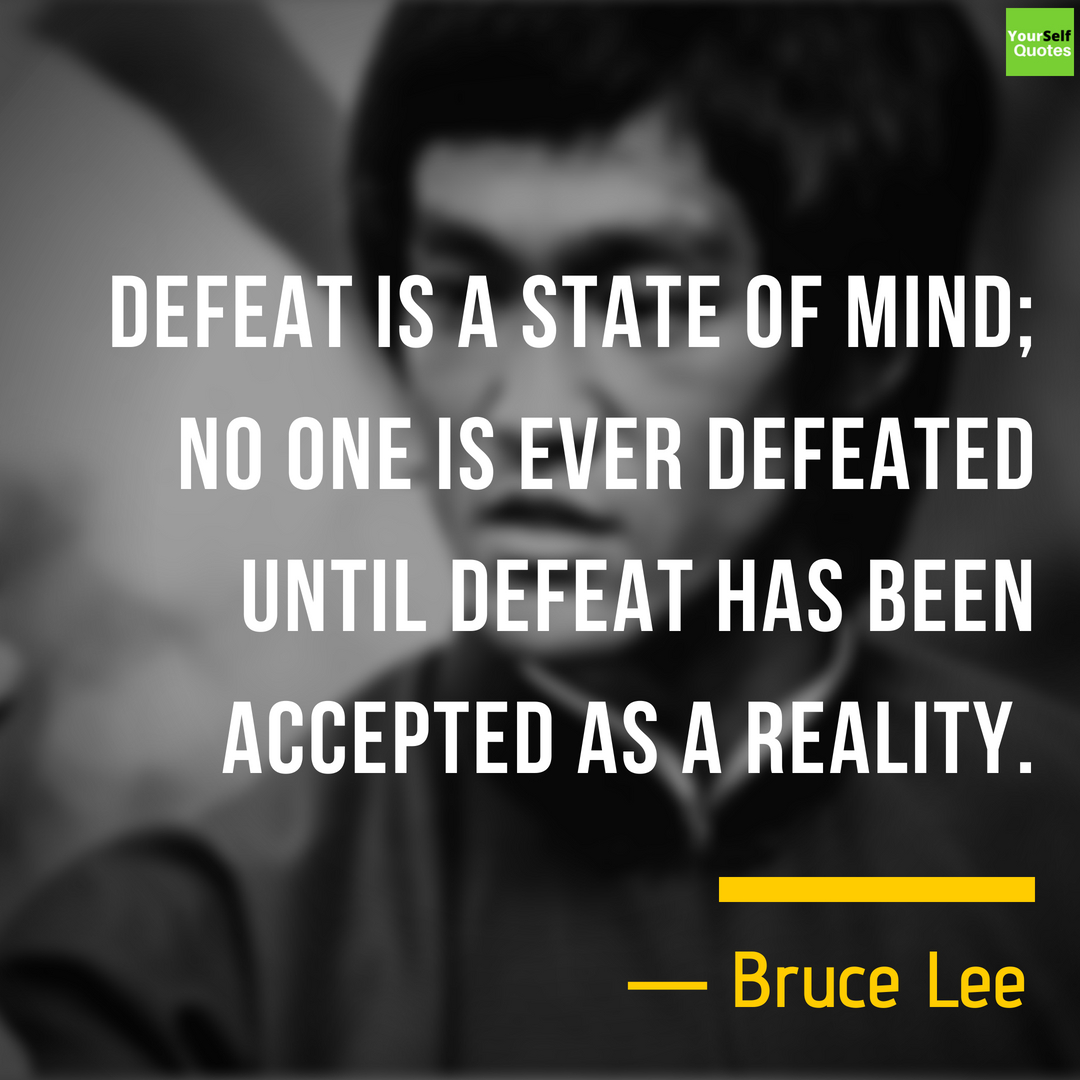 “Knowledge will give you power, but character respect.” ― Bruce Lee

“Make at least one definite move daily toward your goal.” ― Bruce Lee

“Do not pray for an easy life, pray for the strength to endure a difficult one.” ― Bruce Lee

“Do not allow negative thoughts to enter your mind for they are the weeds that strangle confidence.” ― Bruce Lee 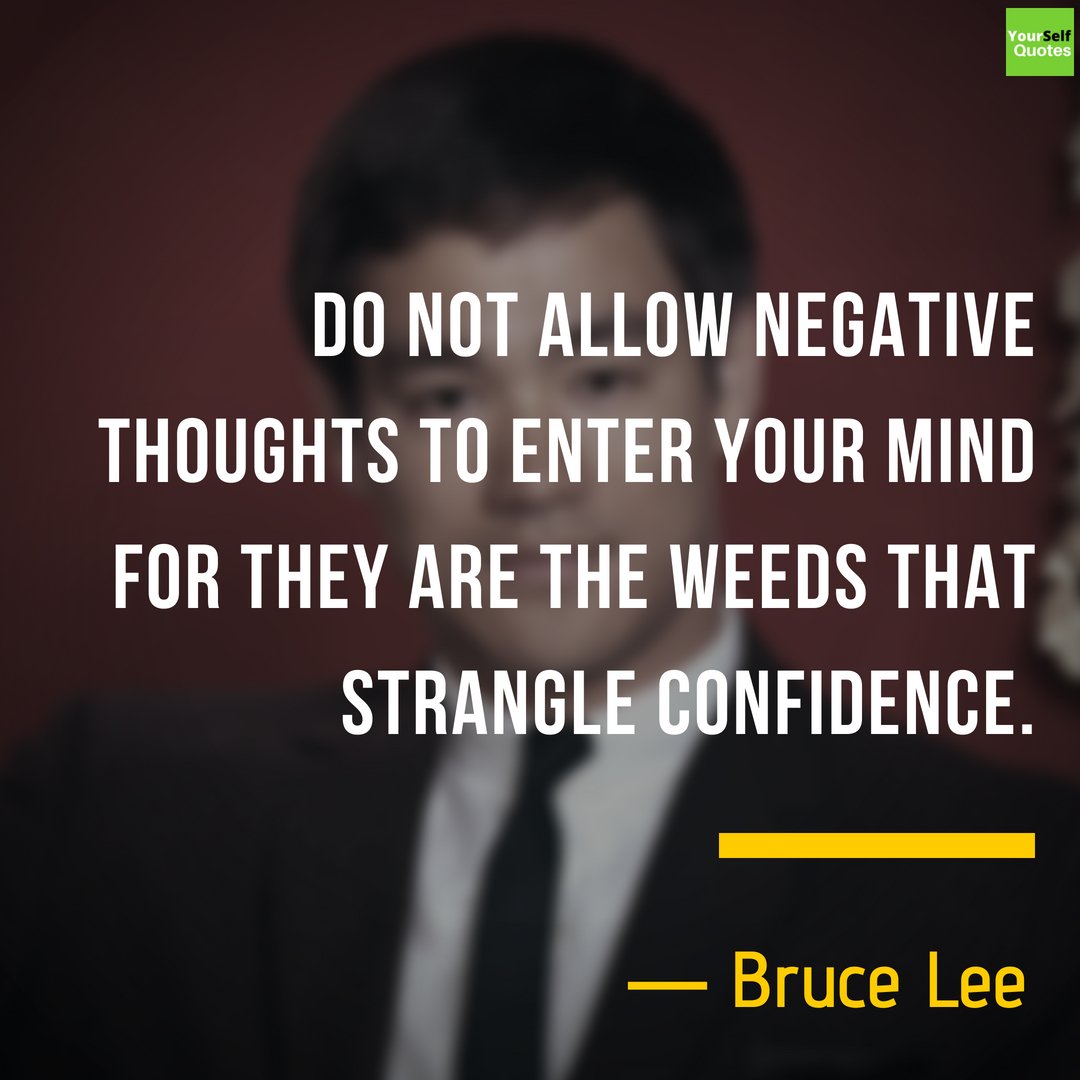 “Adapt what is useful, reject what is useless, and add what is specifically your own.” ― Bruce Lee

“A quick temper will make a fool of you soon enough.” ― Bruce Lee

“One great cause of failure is lack of concentration.” ― Bruce Lee 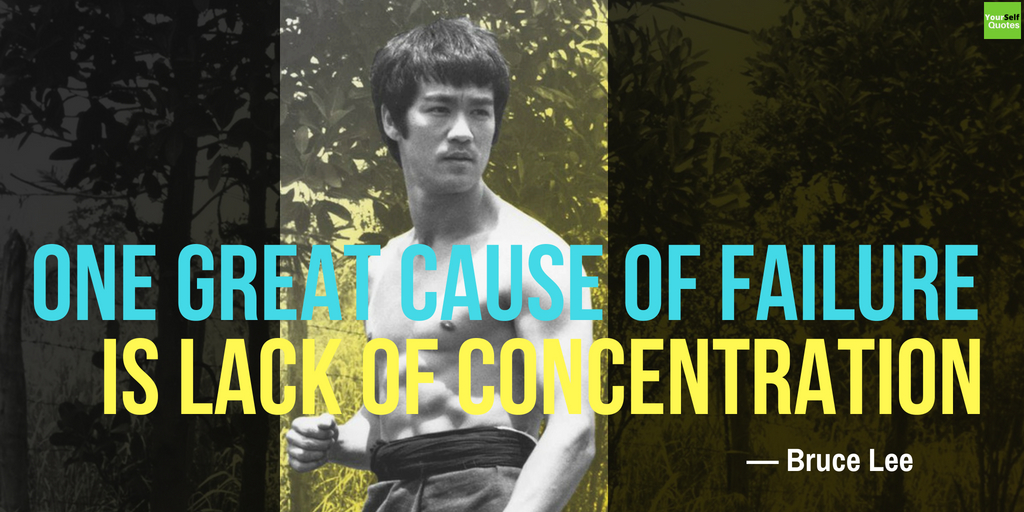 “When I have listened to my mistakes, I have grown.” ― Bruce Lee

“All in all, the goal of my planning and doing is to find the true meaning in life: peace of mind.” 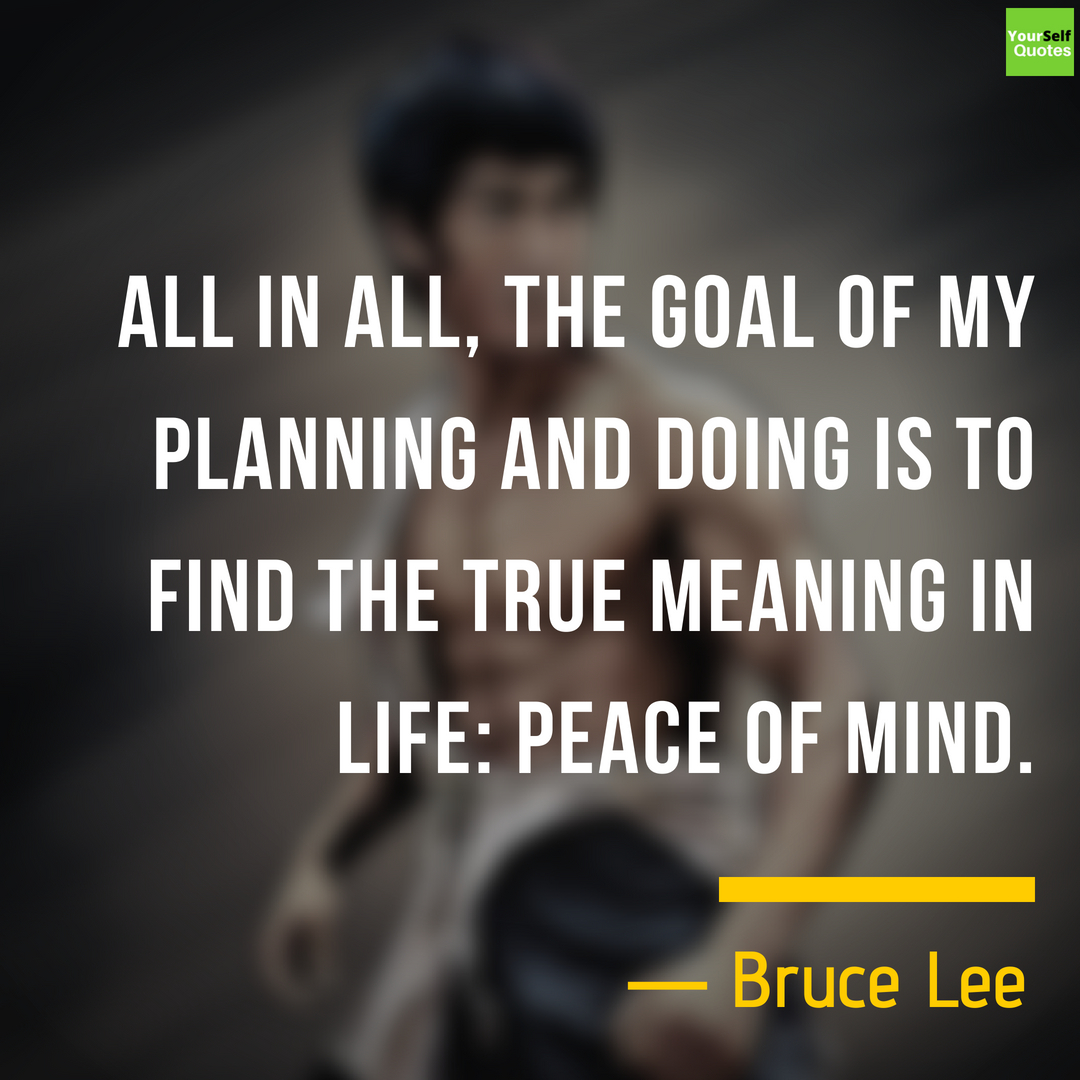 “It’s not the daily increase but the daily decrease. Hack away at the unessential.” ― Bruce Lee

“To see a thing uncolored by one’s own preferences and desires is to see it in its own pristine simplicity. ” ― Bruce Lee

“If you follow the classical pattern, you are understanding the routine, the tradition, the shadow — you are not understanding yourself.”

“A wise man can learn more from a foolish question than a fool can learn from a wise answer.” ― Bruce Le

“Classical methods and tradition make the mind a slave – you are no longer an individual, but merely a product. Your mind is the result of a thousand yesterdays.” ― Bruce Lee

“Be like water making its way through cracks. Do not be assertive, but adjust to the object, and you shall find a way around or through it. If nothing within you stays rigid, outward things will disclose themselves.” 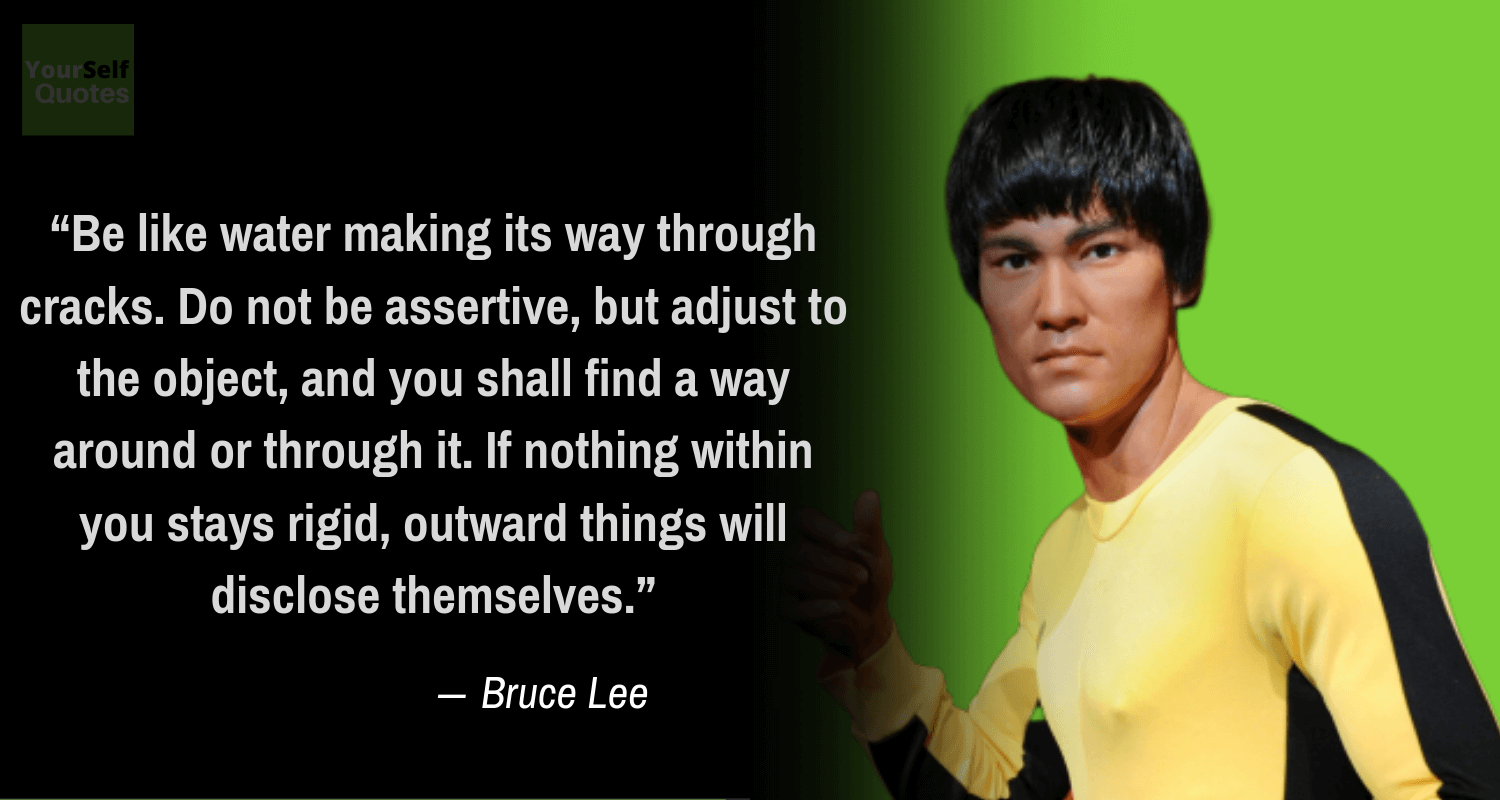 “It is easy for me to put on a show and be cocky, and feel pretty cool and all that. BUT, to express oneself honestly, not lying to oneself. And to express me honestly, that my friend is very hard to do.” ― Bruce Lee

“We should devote ourselves to being self-sufficient and must not depend upon the external ratings by others for our happiness.” ― Bruce Lee 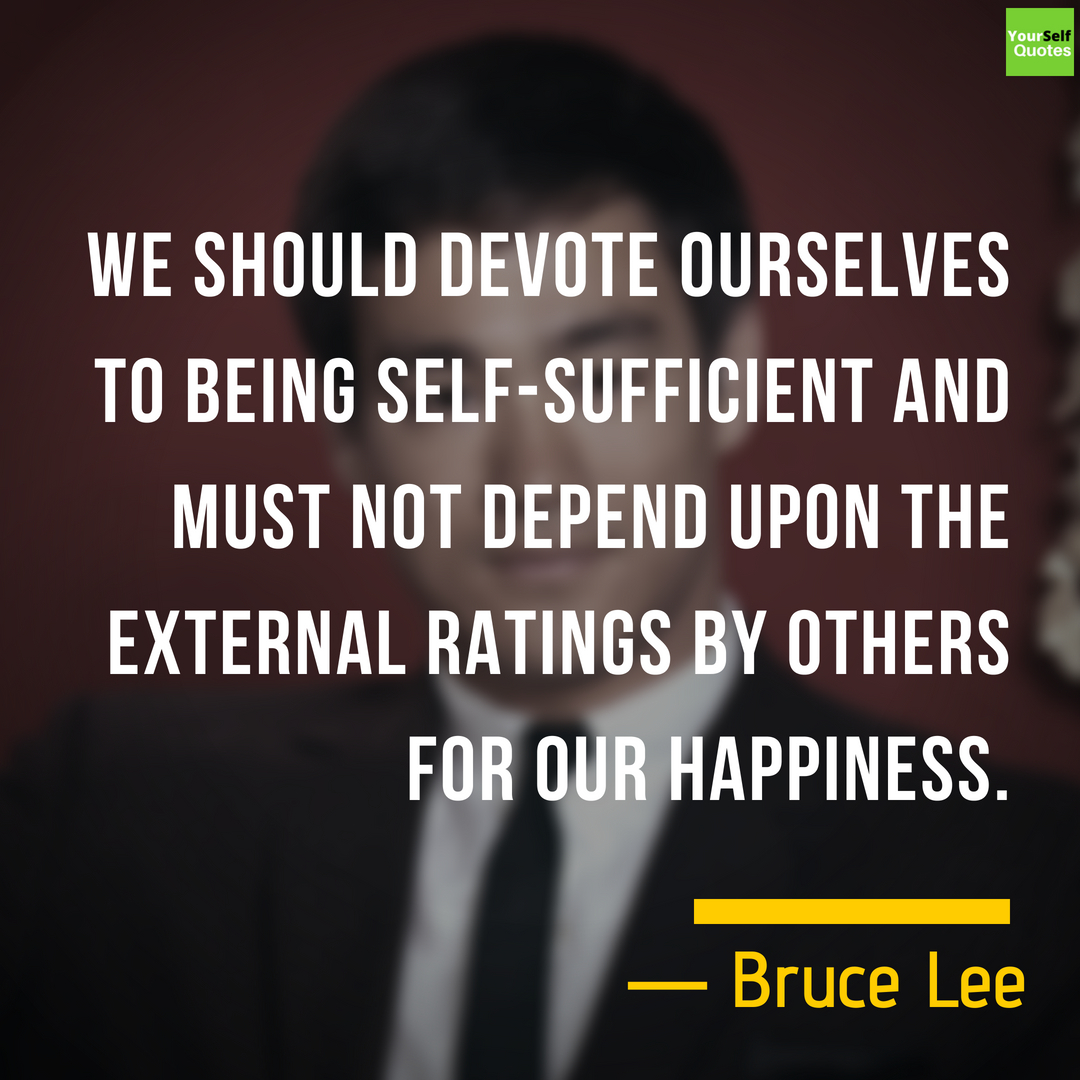 “Believe me that in every big thing or achievement there are always obstacles, big or small, and the reaction one shows to such obstacles is what counts, not the obstacle itself.” ― Bruce Lee

“A simple mind, surely, is one that functions think, and feel without a motive…Meditation is a freeing of the mind from all motives.” ― Bruce Lee

“One must be uninfluenced and die to one’s conditioning in order to be aware of the totally fresh, totally new. Because reality changes every moment, even as I say it.” ― Bruce Lee

“To me, defeat in anything is merely temporary, and its punishment is but an urge for me to greater effort to achieve my goal.” ― Bruce Lee 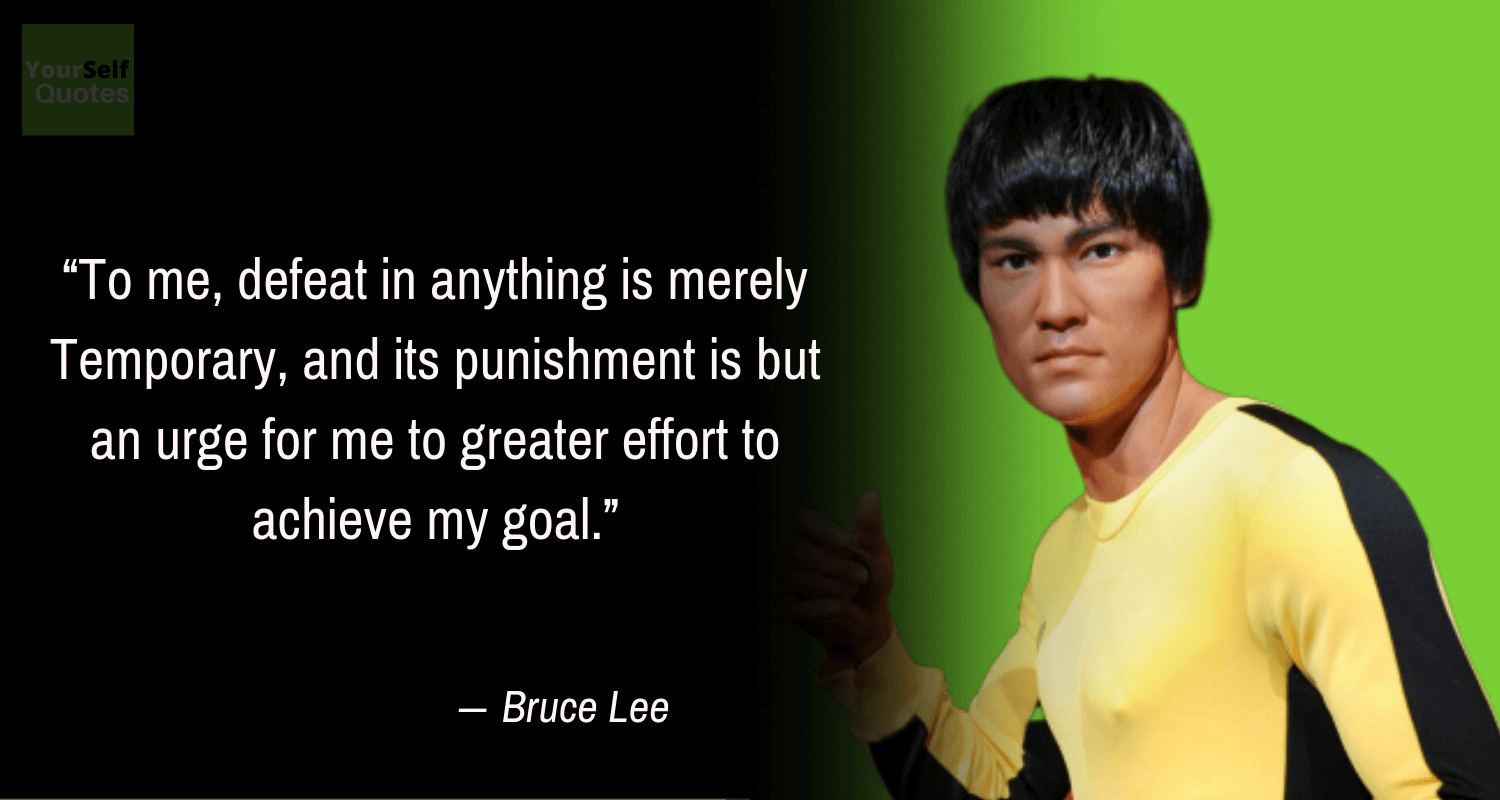 “It is not a shame to be knocked down by other people. The important thing to ask is ‘why am I being knocked down?’ If a person can reflect in this way, then there is hope for this person.”

“Don’t fear failure. Not failure, but low aim, is the crime. In great attempts, it is glorious even to fail.” ― Bruce Lee 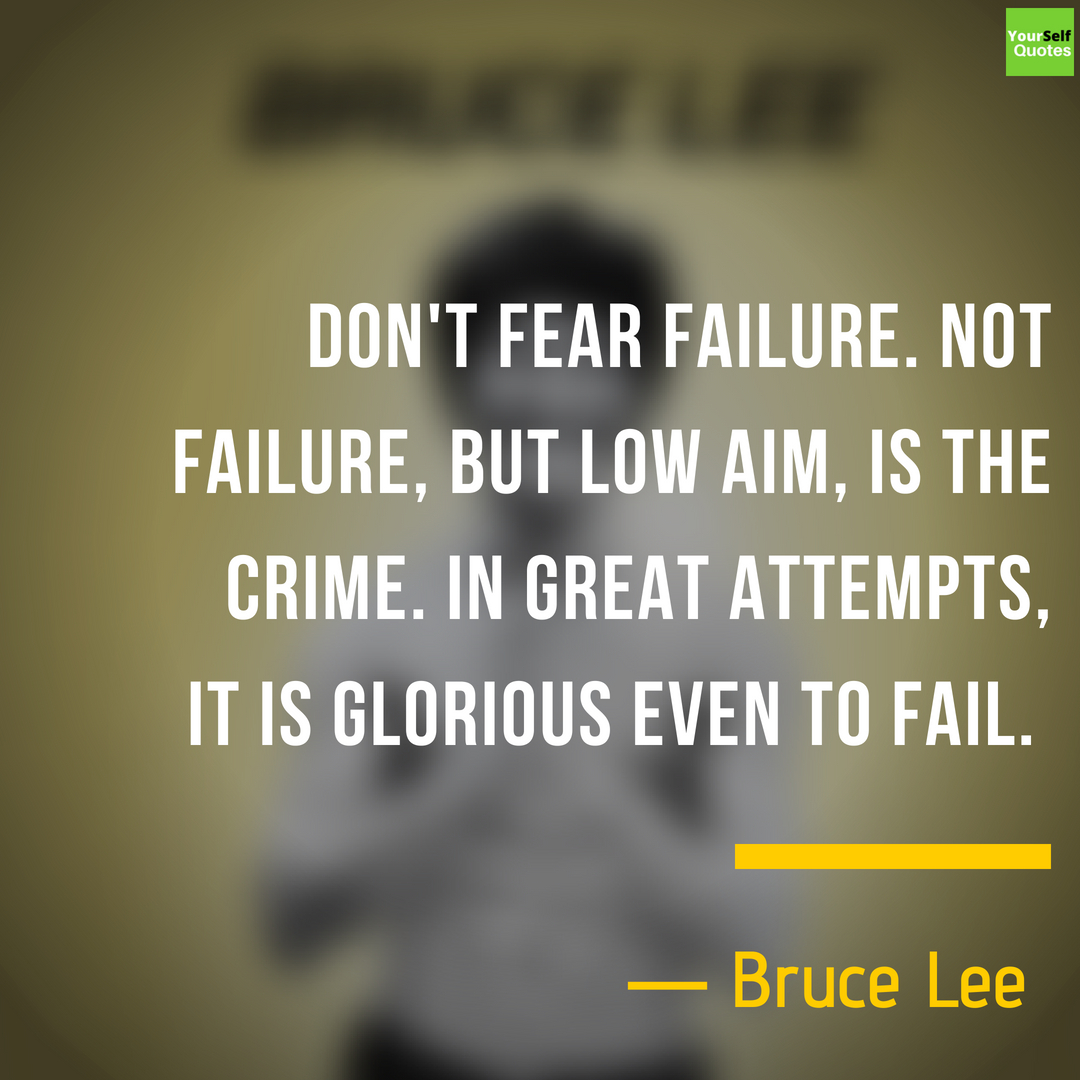 “A teacher is never a giver of truth; he is a guide, a pointer to the truth that each student must fend for himself.” ― Bruce Lee

“Always be yourself, express yourself, have faith in yourself, do not go out and look for a successful personality, and duplicate it.” ― Bruce Lee

“Absorb what is useful, reject what is useless, add what is specifically your own.”― Bruce Lee

He will be known for his spirit of never give up, always thinks out of a box, and proved it at every stage of life. He teaches us to believe in ourselves and do hard work one day you will get success as you love your life, so don’t waste precious time, for time is what life is made up of.

Thanks for viewing this collection of the Quotes By Bruce Lee. Don’t forget to share Bruce Lee Quotes Images on Social Media. Let’s write your comment and know what you think.

Albert Einstein Quotes That Will Really Inspire You Always