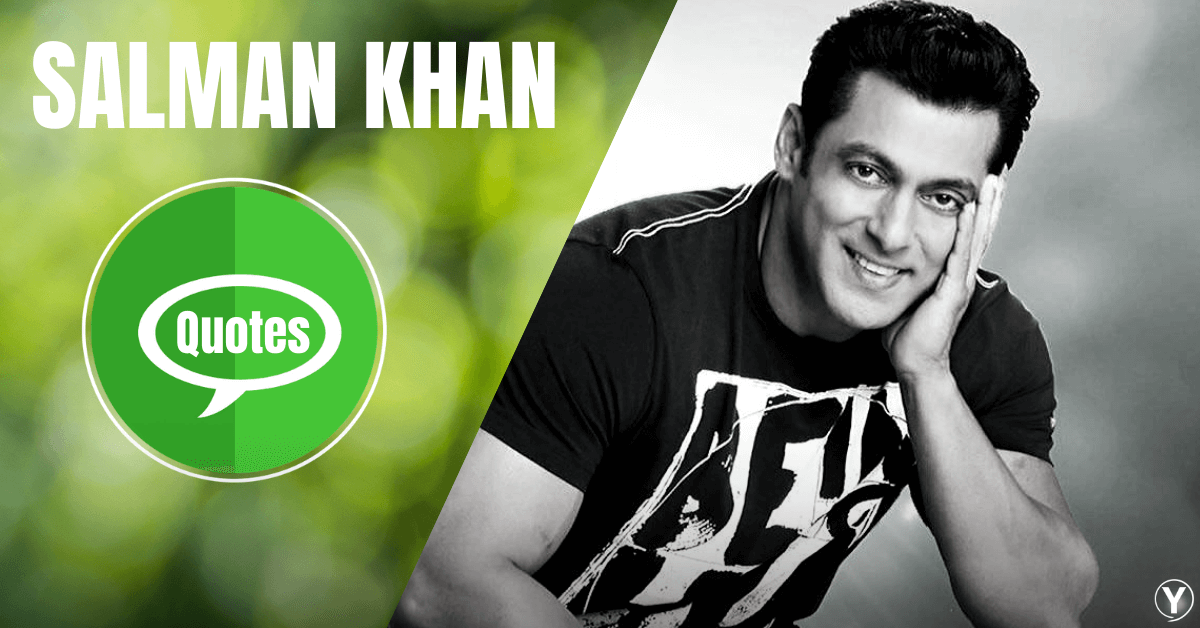 Salman Khan, full name Abdul Rashid Salim Salman Khan is a stunning Indian Actor and producer of the Bollywood industry. The actor is known for his great acting on-screen and occasional singing. He is even hosing many TV serials. The great Khan has completed more than 30 years in the industry. He has received numerous awards for his outstanding performance.

Salman was born on 27th December 1965 in Indore, Madhya Pradesh, India. Salman was born to Salim Khan, the well-known screenwriter, and Salma Khan. He has two brothers Arbaaz Khan and Sohail Khan; and two sisters, Alvira Khan Agnihotri, who is married to actor/director Atul Agnihotri, and an adopted sister Arpita.

In the year 1988, Salman Khan started his acting debut with the movie “Biwi Ho To Aisi” where he played a supporting role. Then in 1989, he was starred in a romantic family drama movie “Maine Pyar Kiya” opposite Bhagyashree. This movie became one of the highest-grossing Indian films at that time. It earned him his first nomination for the Best Actor at Filmfare along with a nomination for Best Male Debut at the same ceremony.

Salman Khan has been involved in several charitable works. He started his own NGO with the name of BEING HUMAN which sells T-shirts and other products online and in stores. The Foundation has two focus areas: education and healthcare. In order to increase the outreach of the foundation, Salman Khan has undertaken initiatives such as Being Human Art, Being Human merchandise, and Being Human Gitanjali Gold Coins.

The actor has been very ground to earth and possesses many helpful and extraordinary qualities. So let’s go through some of the best Salman Khan Quotes that will provoke an actor within you.

“When people throw stones at you, use it as a stepping stone for success.” — Salman Khan 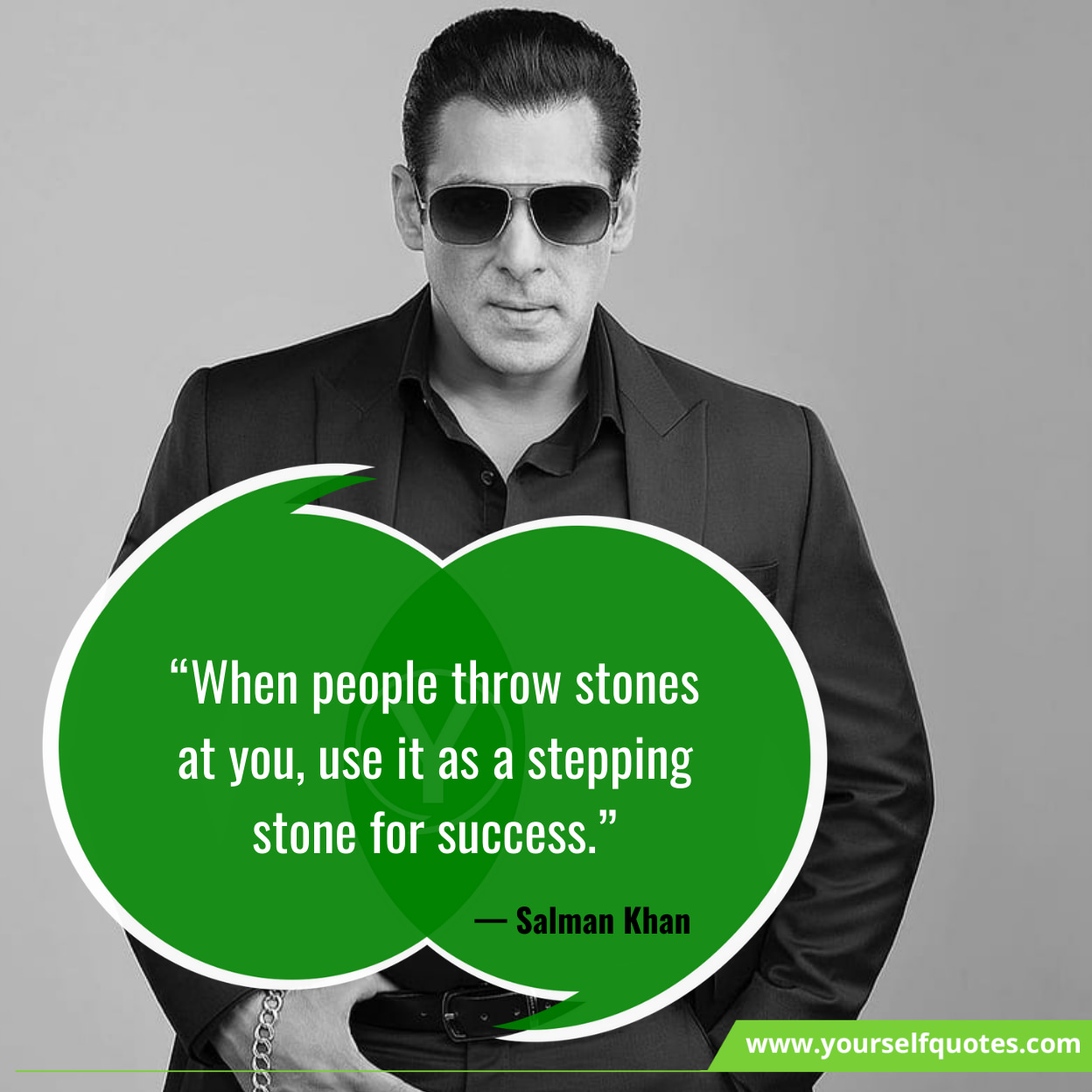 “I don’t have to show that I am working very hard.” — Salman Khan

“Let the world dig love and lust you set goals and dig it every day.” — Salman Khan

“Don’t throw out buzz words without really knowing what is going on behind it.” — Salman Khan

“Sometimes I feel I hope I am not taking advantage of my stardom.” — Salman Khan

“With every film, I try and give the audiences a little more than the previous film in terms of comedy, action, drama and so on.” — Salman Khan

“Sometimes, love marriages don’t work and arranged marriages do and sometimes, it’s the other way around.” — Salman Khan

“I’m not possessive, I’m caring… Once you realize a person doesn’t want that much care, you automatically back off.” — Salman Khan

“A lion runs the fastest when he is hungry.” — Salman Khan 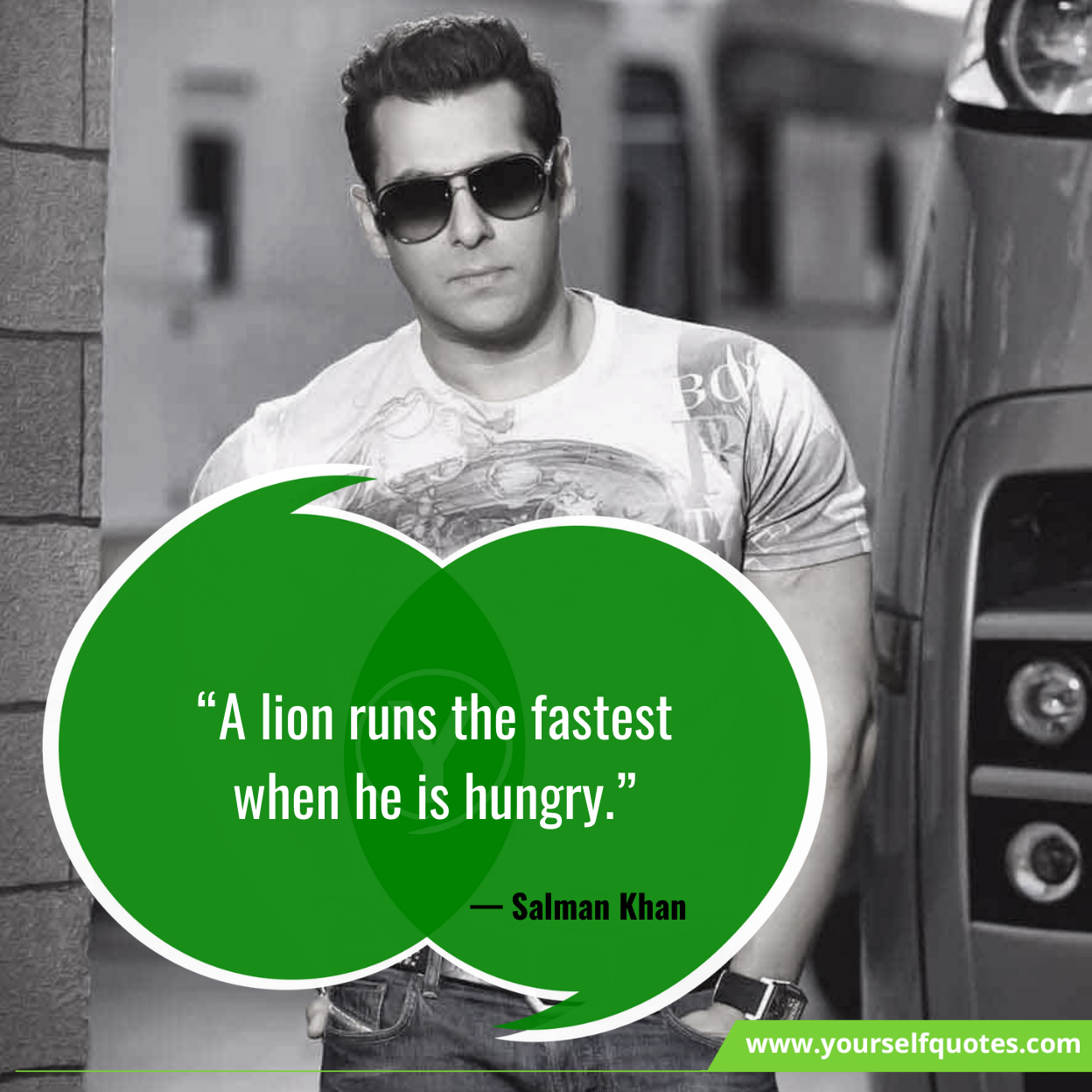 “In the past, I had a knee-jerk approach to work, and it showed on screen. I was doing movies for the wrong reasons – trying to juggle dates, do too many guest appearances, take up projects under pressure or for emotional reasons.” — Salman Khan

“I work with brands that I personally connect with or personal use. For example, I was already driving the Suzuki Hayabusa long before I started endorsing Suzuki.” — Salman Khan

“There are actors who can pull off a writer’s lines; I am not competent enough to do that.” — Salman Khan

“If it is something that I want to do, then I don’t think the audience will hate it. Unless I turn into a megalomaniac and start thinking that Salman Khan can do anything.” — Salman Khan

“My nieces and nephews are my own kids. I believe that one marries to have kids and I already have them. So now marriage isn’t vital.” — Salman Khan

“I feel blessed that I haven’t seen or felt real pain to be immune to it. But I am dreading the time it comes. I feel blessed to have everything going fine. My parents’ health is good, my brothers are well-settled, I have a great brother-in-law and my own career is doing fine. I hope and pray that I am fit and fine always.” — Salman Khan

“Cinema should always be in touch with the soil of the country. My films celebrate the heartland of India.” — Salman Khan

“The best time to release a film is on a festive date like Diwali or Eid, or at a time when there are no big films three to four weeks before or after.” — Salman Khan 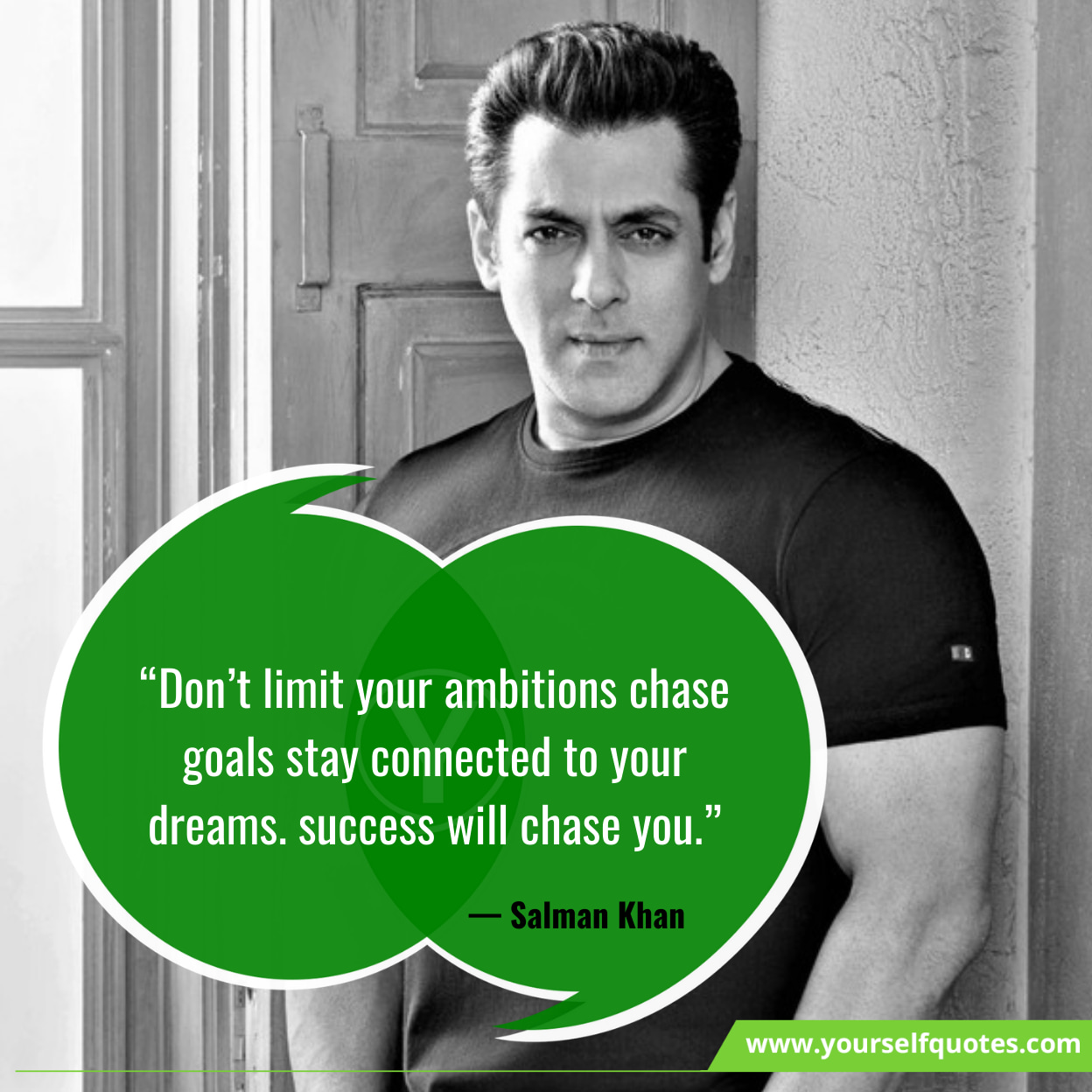 “It feels nice to be loved, but let me tell you there are 10 times better looking, stylish and talented guys than me. So there’s no solid reason for me to be proud! I don’t think I have done anything extraordinary to change people’s lives.” — Salman Khan

“I don’t have to show that I am working very hard.” — Salman Khan

“When people throw stones at you, use it as a stepping stone for success.” — Salman Khan

“Don’t throw out buzz words without really knowing what is going on behind it.” — Salman Khan

“A lion runs the fastest when he is hungry.” — Salman Khan

“I’m not possessive, I’m caring… Once you realize a person doesn’t want that much care, you automatically back off.” — Salman Khan

“I can get caught in many things but there is one thing I will never get caught in, and that is acting – because I don’t act. On screen I am like I am in real life.” — Salman Khan 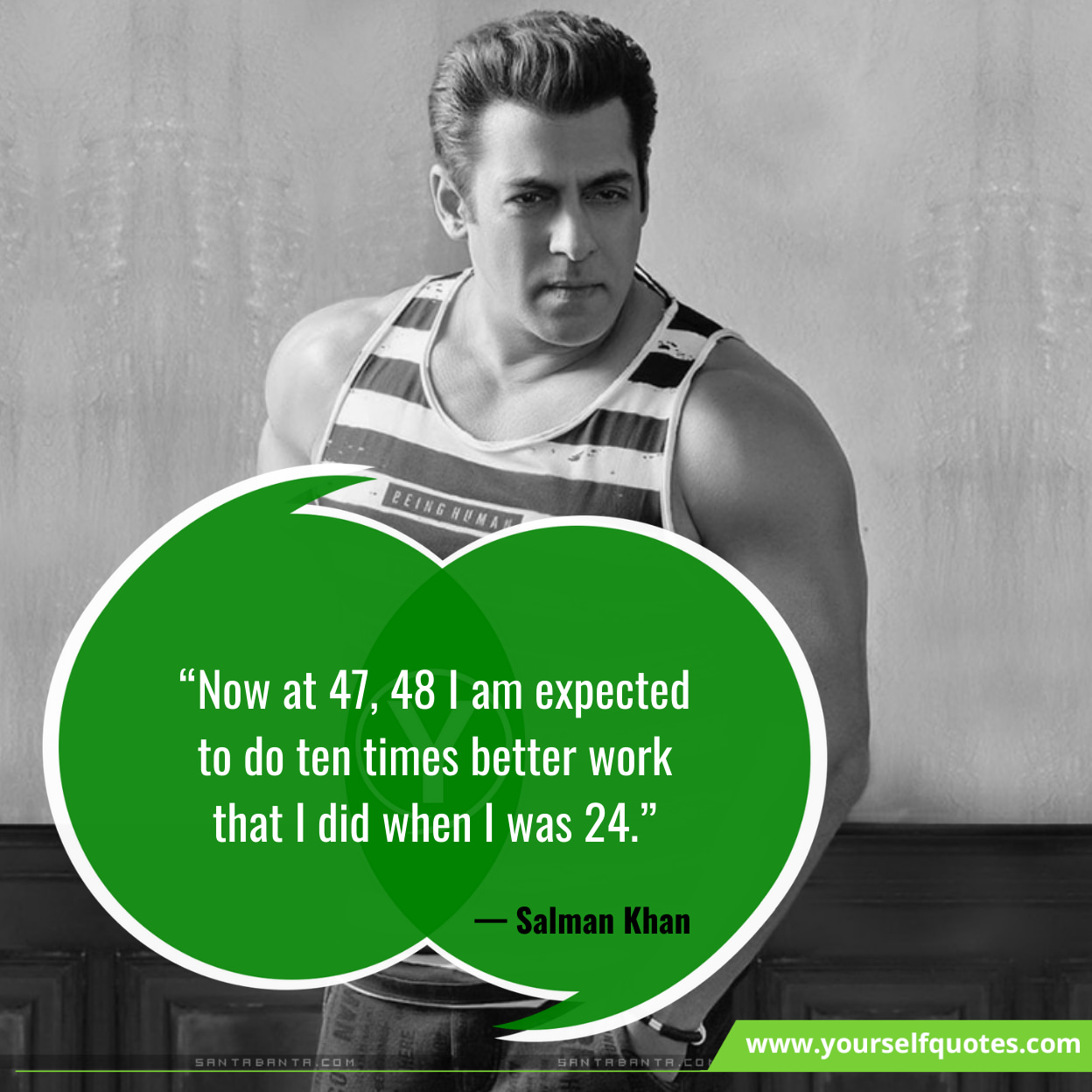 “The only person I have hurt is myself.” — Salman Khan

“Turn your nightmares into your dreams, some dreams don’t turn out the way you want them to , then wake up and turn and turn it around in your favour.” — Salman Khan

“There are people who want awards because it changes the perception of the audience. But I’m not into all that. favour.” — Salman Khan

“If you have an idea that seems worth doing, don’t wait to hire other people and get funding and all those things. Just start doing it, wait to see what happens, and then iterate on that.” — Salman Khan

“No no! Stop chasing your crush. You are born to chase your dreams.” — Salman Khan

“Let the world dig love and lust you set goals and dig it every day.” — Salman Khan

“If what I do threatens you, please stay away from me because the flame inside me would burn you alive.” — Salman Khan

“People will hurt you and act innocent so make sure your middle finger stands straight.” — Salman Khan

“Be the superhero you imagined off when you were young.” — Salman Khan

“I am more convinced than ever that mindsets toward learning could matter more than anything else we teach.” — Salman Khan

“Sometimes I feel I hope I am not taking advantage of my stardom.” — Salman Khan

“Success is like being pregnant, everyone says congratulations but no one knows how many times you were f*ucked.” — Salman Khan

“I don’t have to show that I am working hard.” — Salman Khan

“Let the world dig love and lust, you set goals and dig them every day.” — Salman Khan

“Never underestimate three things in life -I, Me and Myself.” — Salman Khan 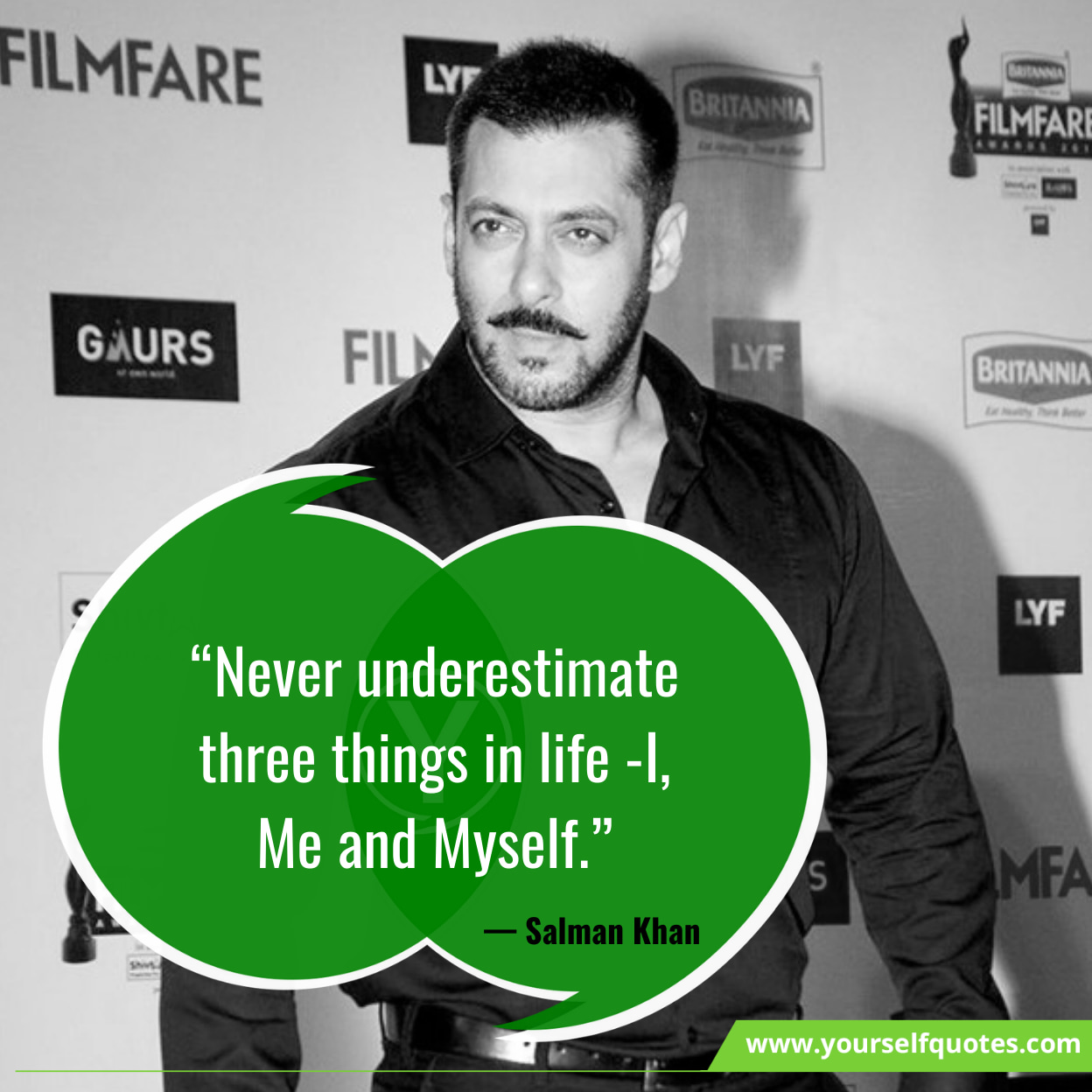 Salman Khan is indeed a great actor in the Bollywood industry. He has mentored a number of aspiring actors. Many actors in the industry are highly motivated and inspired by this great hero, such as Hrithik Roshan and Arjun Kapoor to get into perfect shape. He is very humane and helpful in nature. Khan resides in the Galaxy Apartments, Bandra, Mumbai. He is a dedicated and renowned bodybuilder.

According to the Forbes 2018 list of Top-Paid 100 Celebrity Entertainers in the world, Khan was the highest-ranked Indian with 82nd rank.

Salman Khan is such a personality who is always in the limelight and gathered by a huge fan following. So why not share these starry Salman Khan Quote Images with your family, friends, and loved ones.

Which are your favorite Salman Khan Quotes? Leave a comment below.

Amitabh Bachchan Quotes That Will Evoke A Millionaire In You