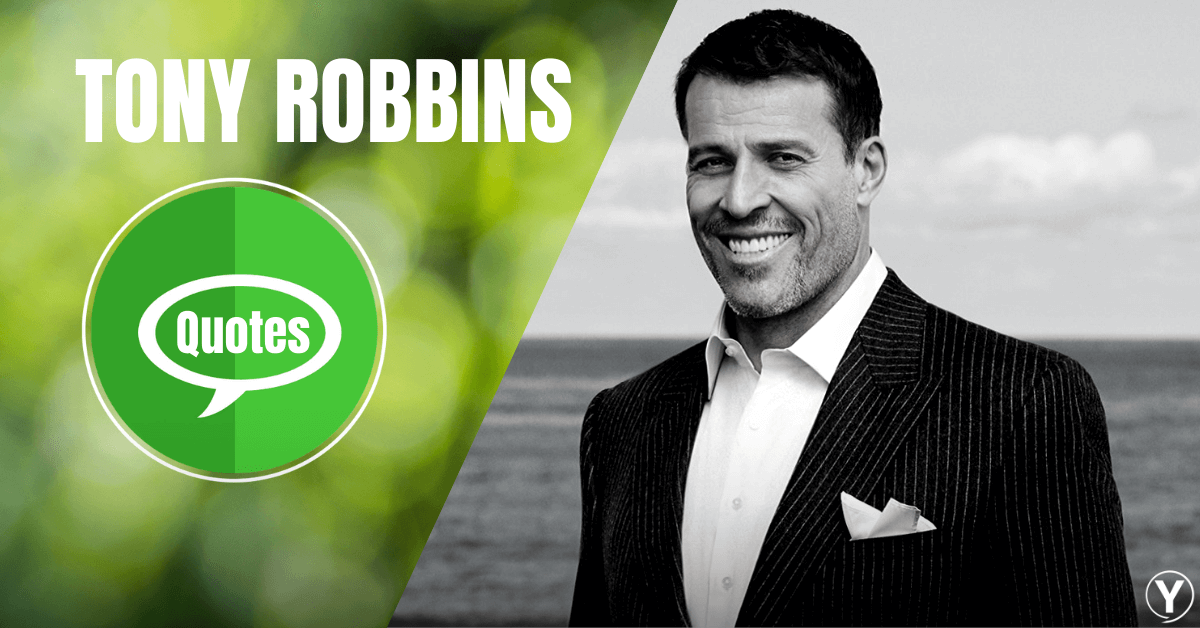 Tony Robbins, the original name Anthony J. Mahavoric is a famous American author and motivational speaker. He is well-known for his infomercials, seminars, and self-help books. In 2015-16, Robbins was listed on the Worth Magazine Power 100 list.

Robbins was born on 29th February 1960 in North Hollywood, California.

Robbins had three younger siblings. His parents got divorced when he was just 7 years old.

At the age of 17 years, Tony began his career promoting seminars for motivational speaker and author Jim Rohn. Moreover, he started teaching Neuro-linguistic Programming. He inculcated the training into his seminars. In 1988, his first infomercial, Personal Power was released. This helped him to promote his services as a “Peak Performance Coach“. He gained wide exposure through it. In 1997, he began the Leadership Academy Seminar. Approximately 400 million people attended his live seminar.

Robbins with Cloé Madanes founded the Robbins-Madanes Center for Intervention. This centre trains life skills to help families and individuals dealing with addiction and other issues. The author has worked on an individual basis with Bill Clinton, Justin Tuck, Wayne Gretzky, Serena Williams, Hugh Jackman, and Pitbull. Moreover, he even counselled American Businessmen Peter Guber, Steve Wynn, and Marc Benioff.

Tony from a very young age was constantly into writings, seminars, and speeches. His viewpoints and techniques helped in improving lives of the masses. He rigorously speaks about various important issues such as human needs, influences that affect people, the power of making decisions” and the need to achieve “emotional mastery” Robbins has authored many best-selling books such as Money: Master the Game and Awaken the Giant Within.

Let’s have a look at some of the most exciting Tony Robbins Quotes that will awaken the new you.

“The way to love yourself is to love those around you.” — Tony Robbins

“In life, you need either inspiration or desperation.” — Tony Robbins

“Things do not have meaning. We assign meaning to everything.” — Tony Robbins

“It’s time to crush your past limitations and unleash your power.” — Tony Robbins

“We can change our lives. We can do, have, and be exactly what we wish.” — Tony Robbins

“Everybody’s life is either rewarding or an example.” — Tony Robbins

“The path to success is to take massive, determined action.” — Tony Robbins

“All personal breakthroughs begin with a change in beliefs.” — Tony Robbins 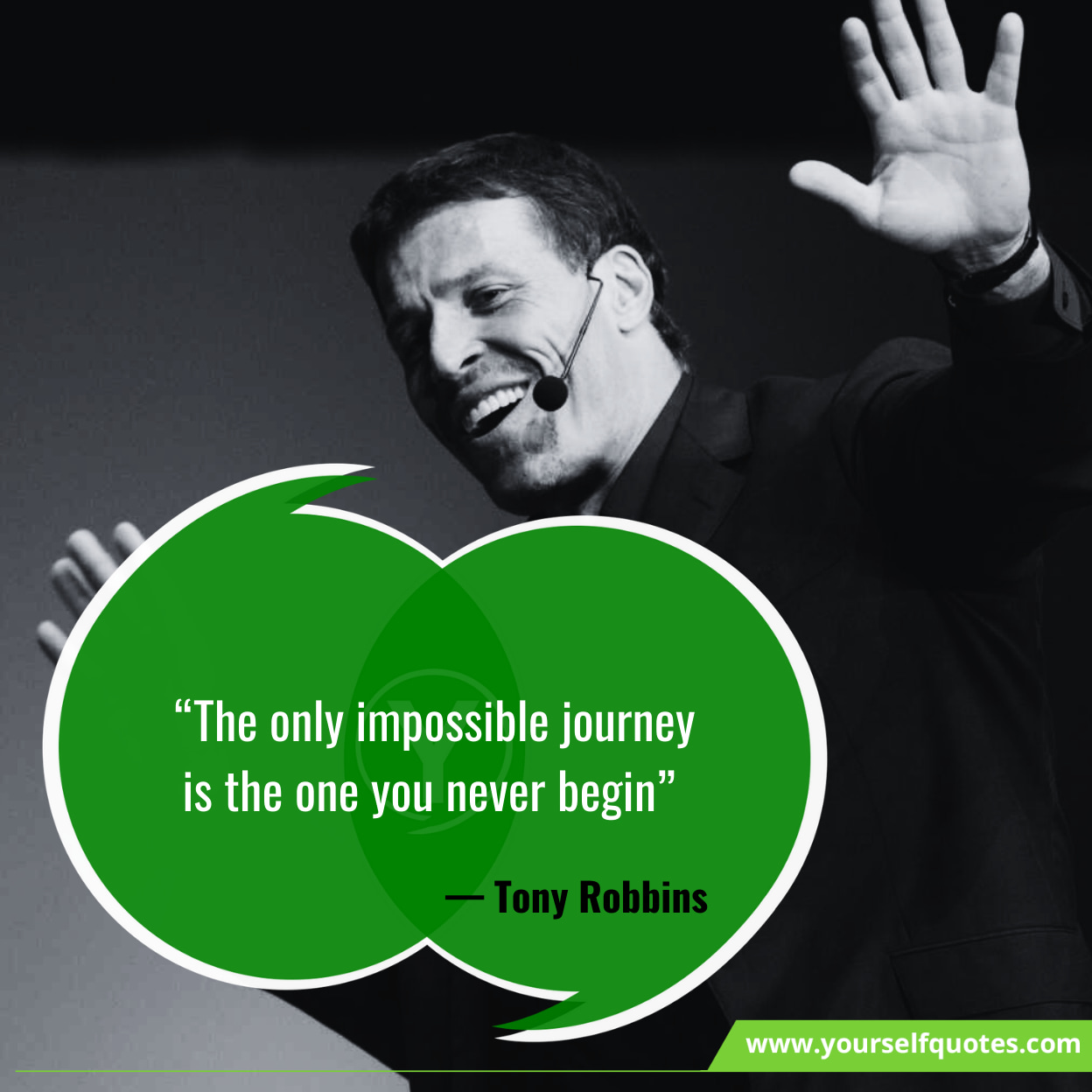 “A real decision is measured by the fact that you’ve taken a new action. If there’s no action, you haven’t truly decided.” — Tony Robbins

“The secret of success is learning how to use pain and pleasure instead of having pain and pleasure use you. If you do that, you’re in control of your life. If you don’t, life controls you. Identify your problems, but give your power and energy to solutions.” — Tony Robbins

“Nothing has any power over me other than that which I give it through my conscious thoughts.” — Tony Robbins

“Identify your problems, but give your power and energy to solutions.” — Tony Robbins

“More than anything else, I believe it’s our decisions, not the conditions of our lives, that determine our destiny.” — Tony Robbins

“Focus on where you want to go, not on what you fear.” — Tony Robbins

“You are a fraud only to yourself-you have deceived yourself into believing you aren’t worthy.” — Tony Robbins

“The path to success is to take massive, determined action.” — Tony Robbins 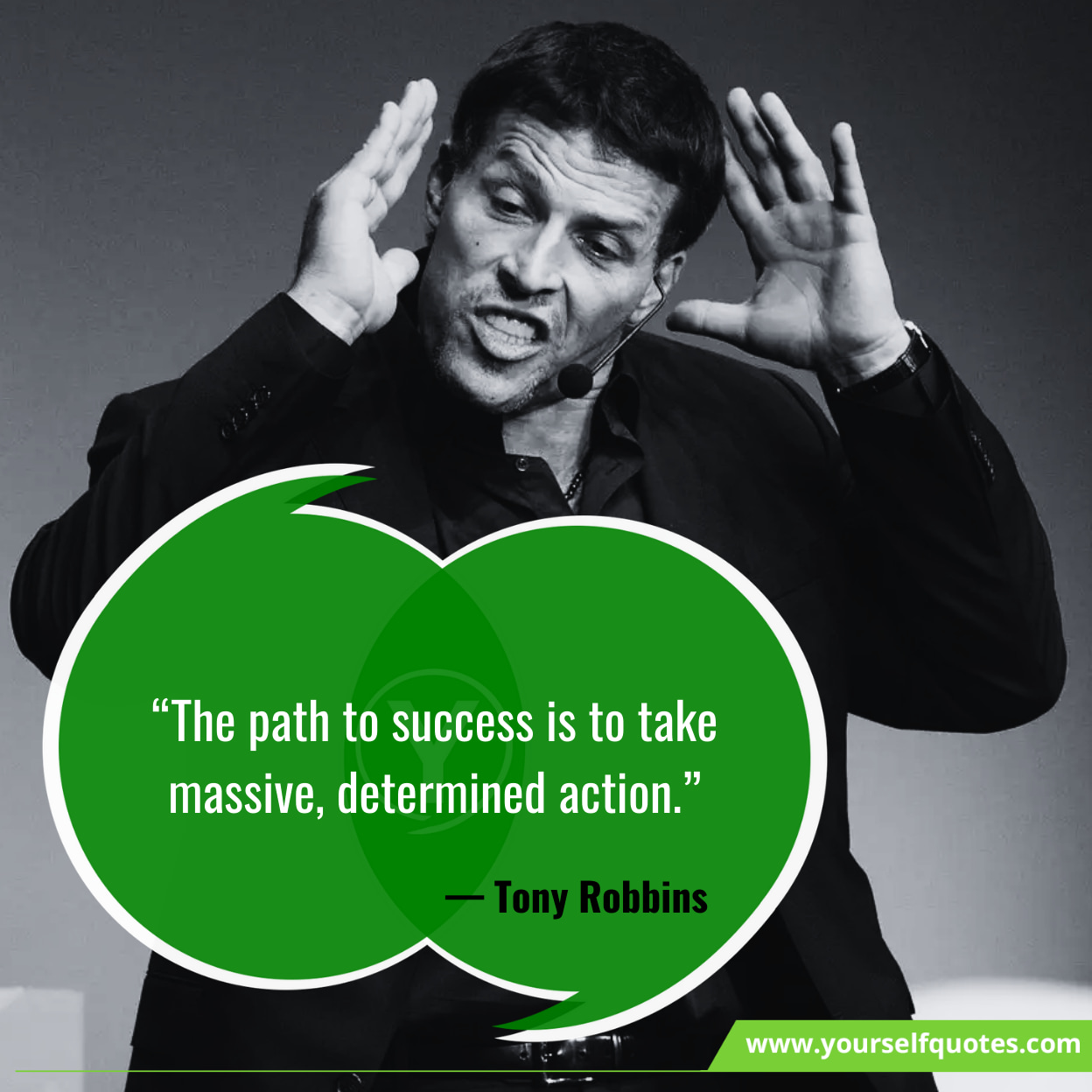 “Let fear be a counsellor and not a jailer.” — Tony Robbins

“You see, in life, lots of people know what to do, but few people actually do what they know. Knowing is not enough! You must take action.” — Tony Robbins

“The only thing that’s keeping you from getting what you want is the story you keep telling yourself.” — Tony Robbins

“To effectively communicate, we must realize that we are all different in the way we perceive the world and use this understanding as a guide to our communication with others.” — Tony Robbins

“You can’t be fearful and grateful simultaneously. Gratitude is the antidote to fear.” — Tony Robbins

“One reason so few of us achieve what we truly want is that we never direct our focus; we never concentrate our power. Most people dabble their way through life, never deciding to master anything in particular.” — Tony Robbins

“Live life fully while you’re here. Experience everything. Take care of yourself and your friends. Have fun, be crazy, be weird. Go out and screw up! You’re going to anyway, so you might as well enjoy the process.” — Tony Robbins

“In life, you need either inspiration or desperation.” — Tony Robbins 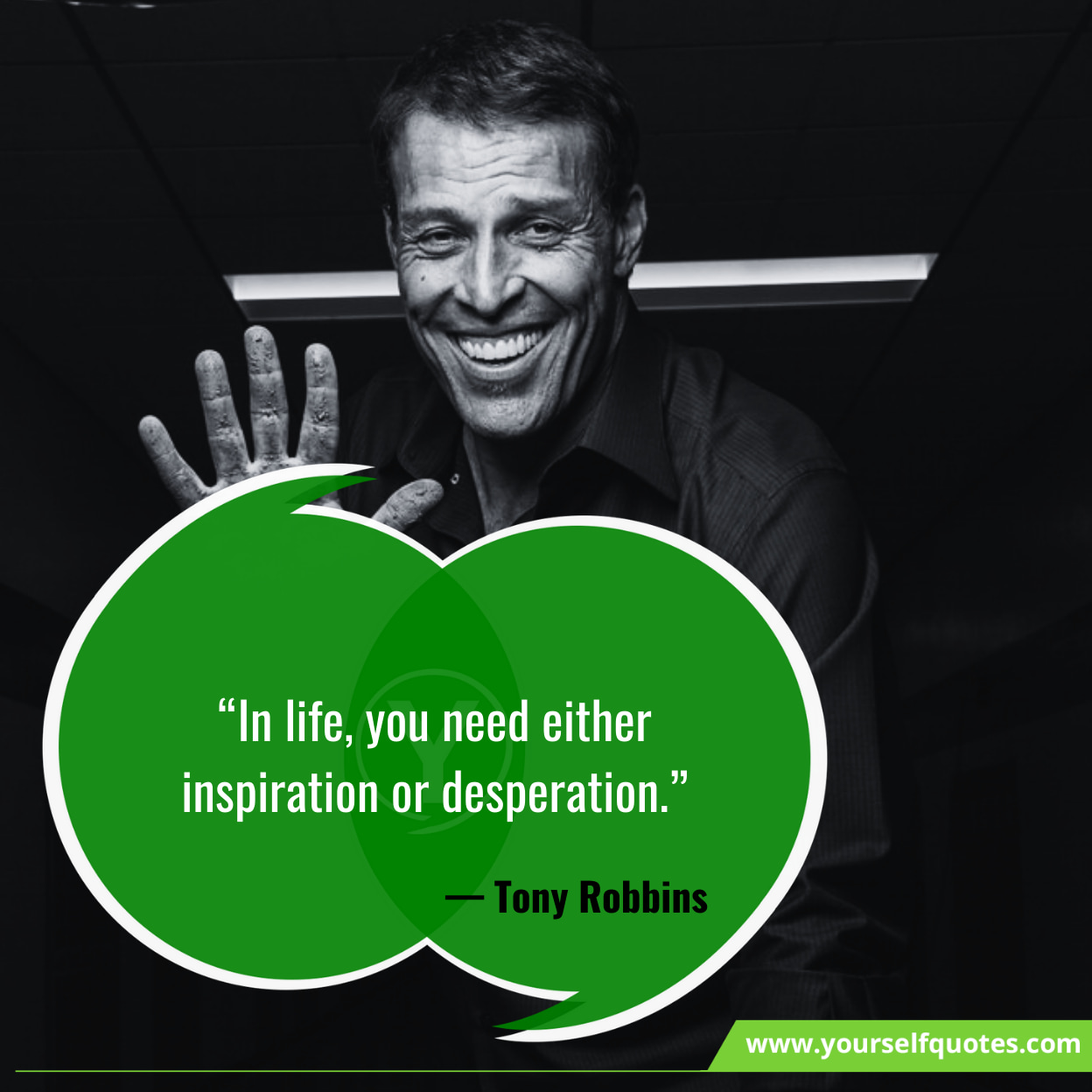 “The only thing that’s keeping you from getting what you want is the story you keep telling yourself.” — Tony Robbins

“Your past does not equal your future.” — Tony Robbins

“Identify your problems, but give your power and energy to solutions.” — Tony Robbins

“Any time you sincerely want to make a change, the first thing you must do is to raise your standards.” — Tony Robbins

“Setting goals is the first step in turning the invisible into the visible.” — Tony Robbins

“Goals are like magnets. They’ll attract the things that make them come true.” — Tony Robbins

“Persistence overshadows even talent as the most valuable resource shaping the quality of life.” — Tony Robbins

“It’s what you practice in private that you’ll be rewarded for in public.” — Tony Robbins

“It is in your moments of decision that your destiny is shaped.” — Tony Robbins

“The only limit to your impact is your imagination and commitment.” — Tony Robbins

“Every problem is a gift – without problems, we would not grow.” — Tony Robbins

“It is in your moments of decision that your destiny is shaped.” — Tony Robbins

“You see, in life, lots of people know what to do, but few actually do what they know. Knowing is not enough! You must take action.” — Tony Robbins

“You don’t have to have a reason to feel good. You’re alive! You can feel good for no reason at all!” — Tony Robbins

“If you talk about it, it’s a dream. If you envision it, it’s possible. If you schedule it, it’s real.” — Tony Robbins 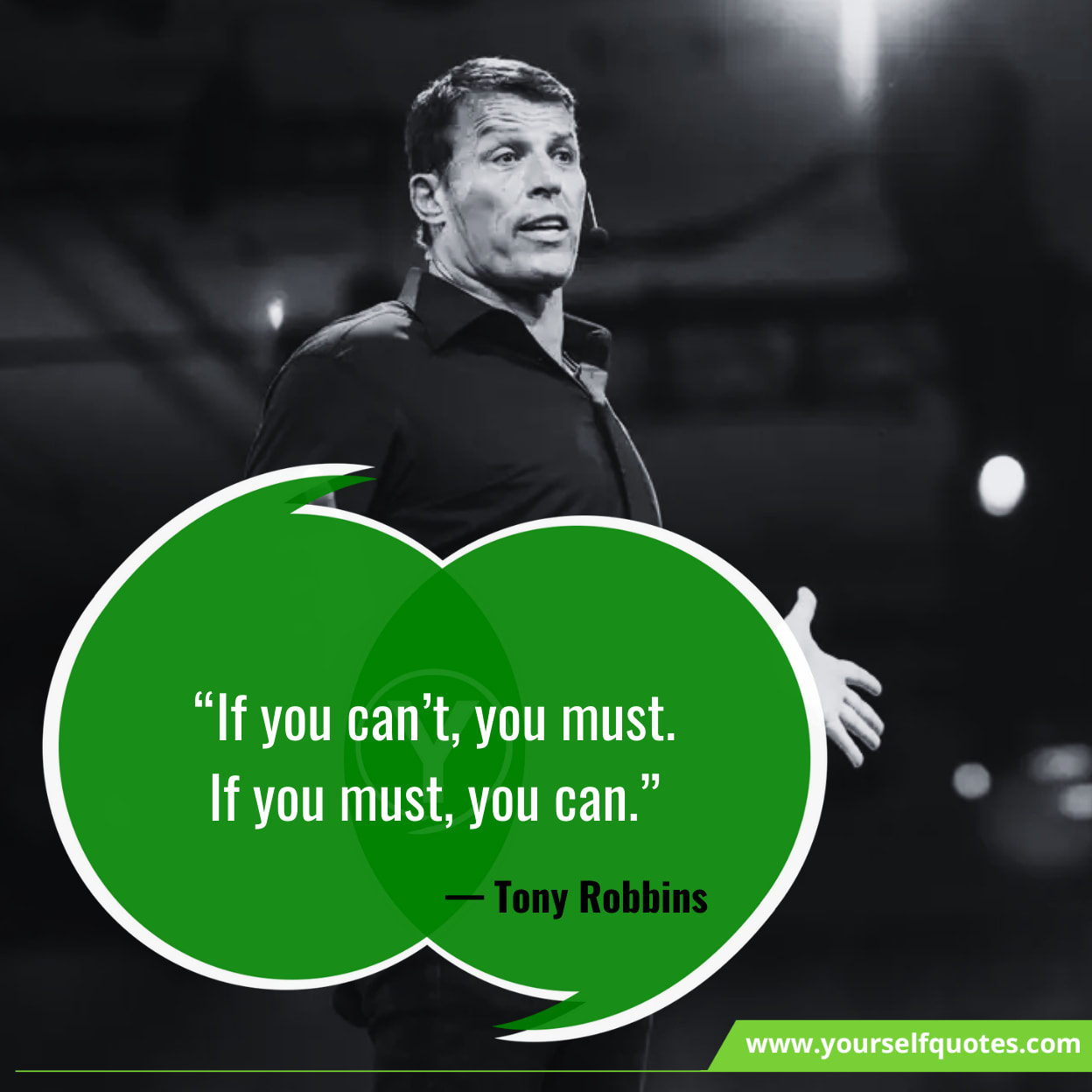 Tony Robbins is one of the best life coaches and strategists. His words of wisdom have been an inspiration for thousands of people worldwide.

He spoke worldwide on many important topics such as goal setting, finances, mindset, habits, productivity, fear, and human behavior.

Robbins married Rebecca “Becky” Jenkins in 1984. Then he divorced her in 1998. Further, he fathered a child with former girlfriend Liz Acosta. His son Jairek Robbins, is also a personal empowerment trainer. 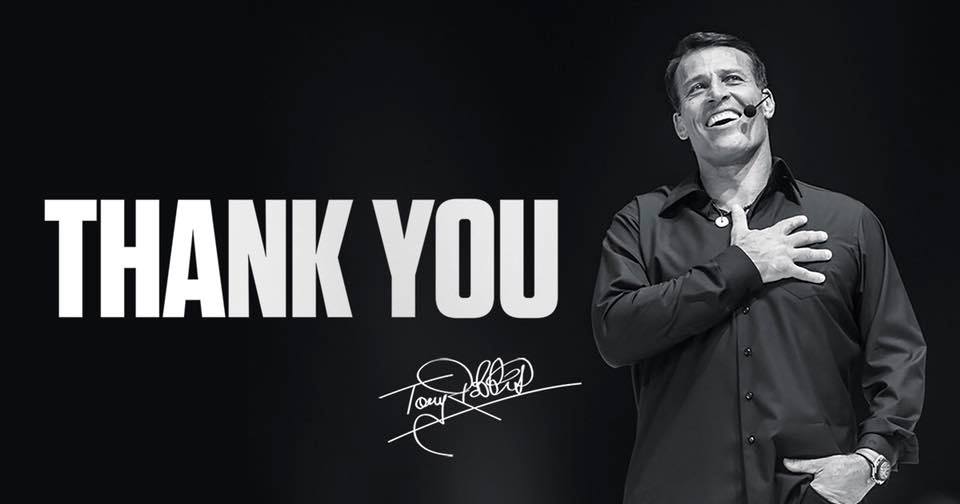 Tony Robbins’s Net Worth:– As of 2019, Tony Robbins‘net worth is roughly $500 million dollars.

I hope you experienced a new outlook by going through these exciting Tony Robbins Quotes Images. If yes, do share these with your loved ones and family.

Which are your favorite Tony Robbins Quotes? Leave a comment below.