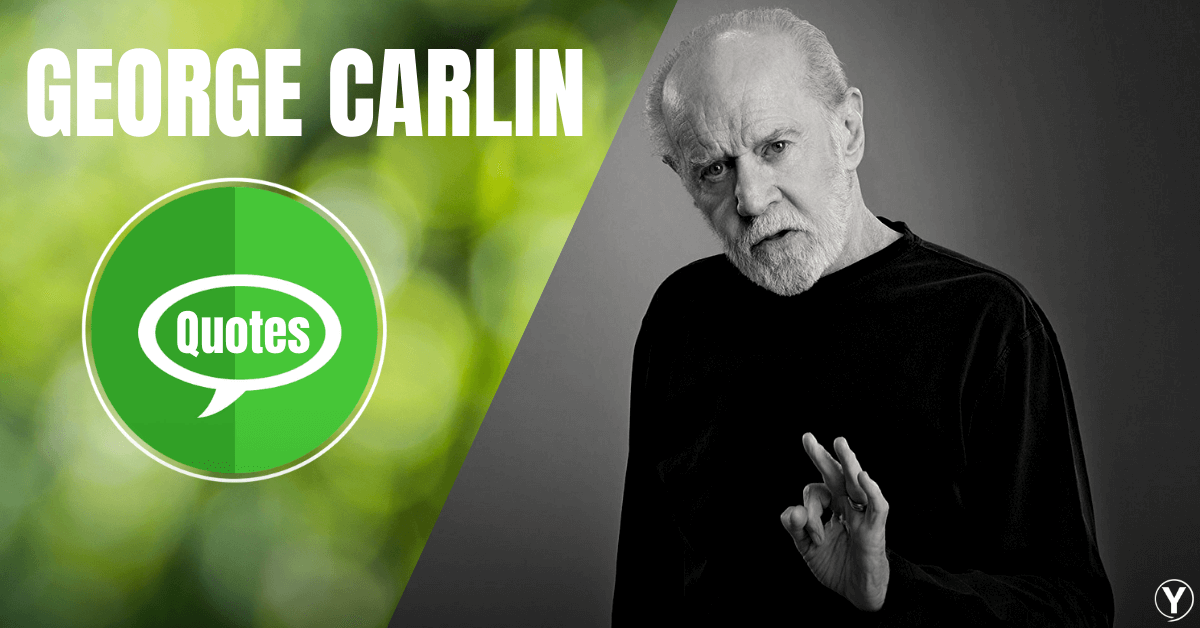 George Carlin, the birth name George Denis Patrick Carlin was a famous American stand-up comedian. The actor is a multi-talented personality. He is popular for his intensive skills. He is known to be an amateur philosopher, author, and social critic.

George was born on May 12, 1937, in Manhattan, New York, U.S. George was born to Mary Carlin (née Bearey) and The Sun‘s advertising manager Patrick John Carlin. He had one older brother, Patrick Jr.

Carlin was raised by his mother alone as his father’s alcoholism separated his parents. He picked up an appreciation for the effective use of the English language from his mother. After completing studies he joined the United States Air Force and trained as a radar technician. At that time he lived at Barksdale Air Force Base in Bossier City, Louisiana. He even worked as a Radio Jockey at radio station KJOE.

At the time at which George was working as a Radio Jockey, he met Jack Burns. They together formed a successful comedy team called The Cellar. From here his journey towards his main aim continued.

The man became extremely popular because of his Black Comedy. He stressed politics, the English language, psychology, religion, and various taboo subjects. One of his famous comedy series, “seven dirty words” was targeted to the 1978 U.S. Supreme Court case F.C.C. v. Pacifica Foundation, in which a 5–4 decision affirmed the government’s power to regulate indecent material on the public airwaves.

In 1977, the first of Carlin’s 14 stand-up comedy specials for HBO was filmed. He mainly focused upon sociocultural criticism of American society. He had a keen interest in contemporary political issues in the United States and satirized the excesses of American culture.

Before his death from cardiac arrest HBO special, It’s Bad for Ya was filmed less than four months. The great actor was highly influenced by many other great personalities such as  Danny Kaye, Jonathan Winters, Lenny Bruce, Richard Pryor, Jerry Lewis, and many others.

Carlin was known for his great words which aroused interest in his work among people. So let’s read out the most impressive George Carlin Quotes to make you stand positive in tough situations.

“Never underestimate the power of stupid people in a large group.” — George Carlin 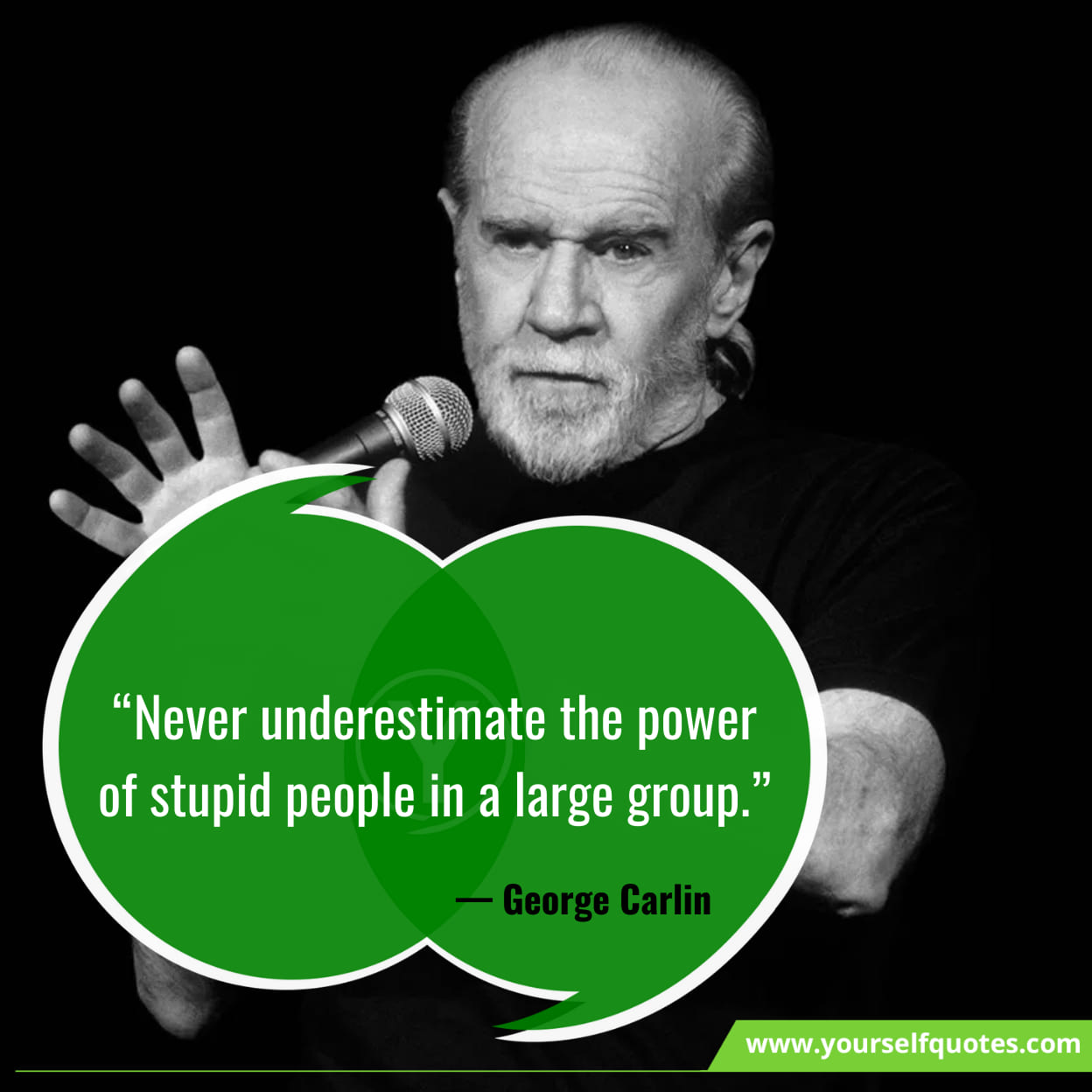 “Never argue with an idiot. They will only bring you down to their level and beat you with experience.” — George Carlin

“Religion is like a pair of shoes, find one that fits for you, but don’t make me wear your shoes.” — George Carlin

“Just ’cause you got the monkey off your back doesn’t mean the circus has left town.” — George Carlin

“I finally figured out what e-mail is for. It’s for communicating with people you’d rather not talk to.” — George Carlin
[/pullquote]

“Some people see the glass half full. Others see it half empty. I see a glass that’s twice as big as it needs to be.” — George Carlin

“People always tell me “Have a nice day.” Well, what if I don’t want to? What if I want to have a crappy day?” — George Carlin

“I will tell you one thing – the future, ain’t what it used to be.” — George Carlin

“Frisbeetarianism is the belief that when you die, your soul goes up on the roof and gets stuck.” — George Carlin

“The reason I talk to myself is that I’m the only one whose answers I accept.” — George Carlin 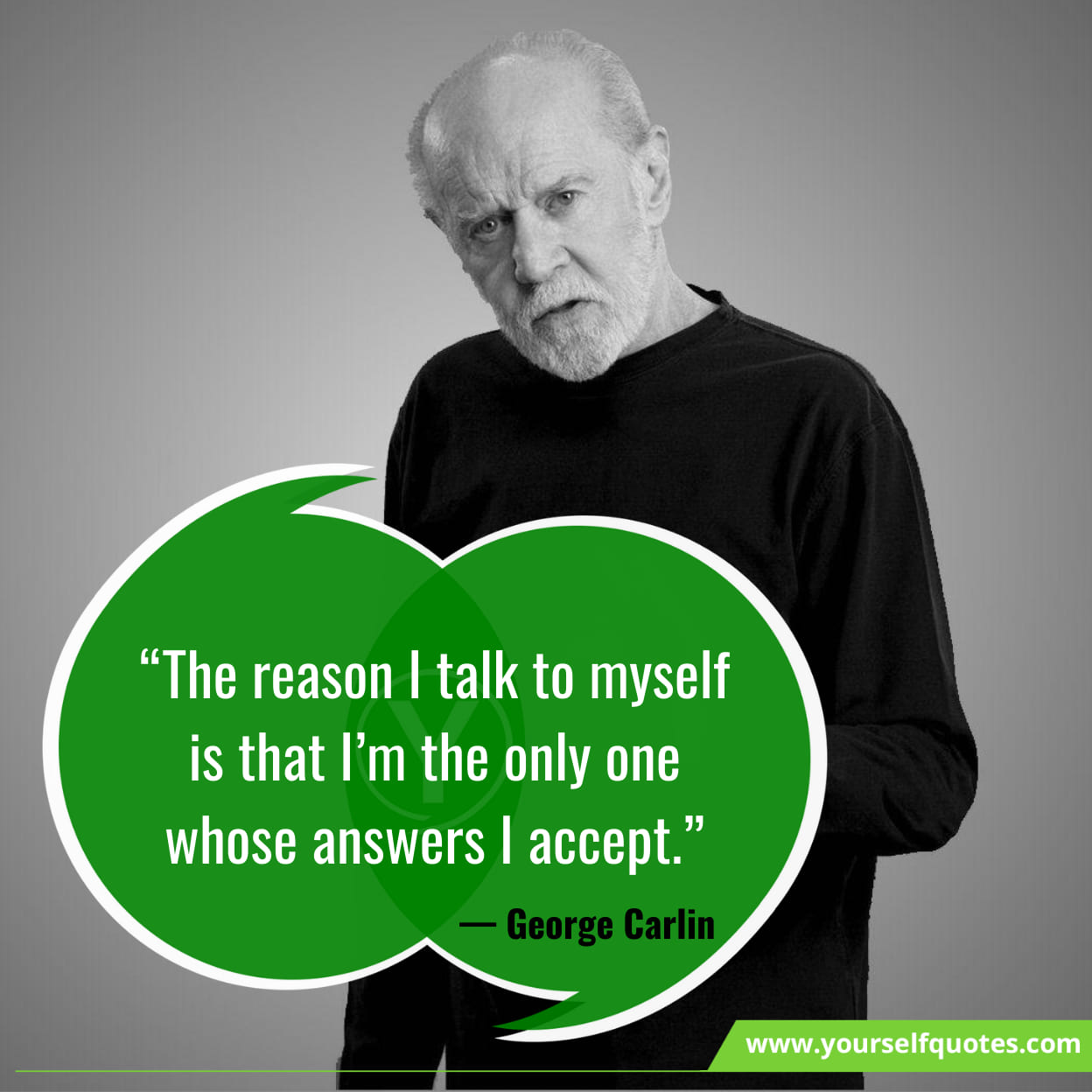 “Fighting for peace is like screwing for virginity.” — George Carlin

“The planet is fine. The people are fucked.” — George Carlin

“Fighting for peace is like screwing for virginity.” — George Carlin

“That’s why they call it the American Dream because you have to be asleep to believe it.” — George Carlin

“May the forces of evil become confused on the way to your house.” — George Carlin

“There are nights when the wolves are silent and only the moon howls. ” — George Carlin

“If you try to fail, and succeed, which have you done?”— George Carlin

“Life gets really simple once you cut out all the bull shit they teach you in school.” — George Carlin 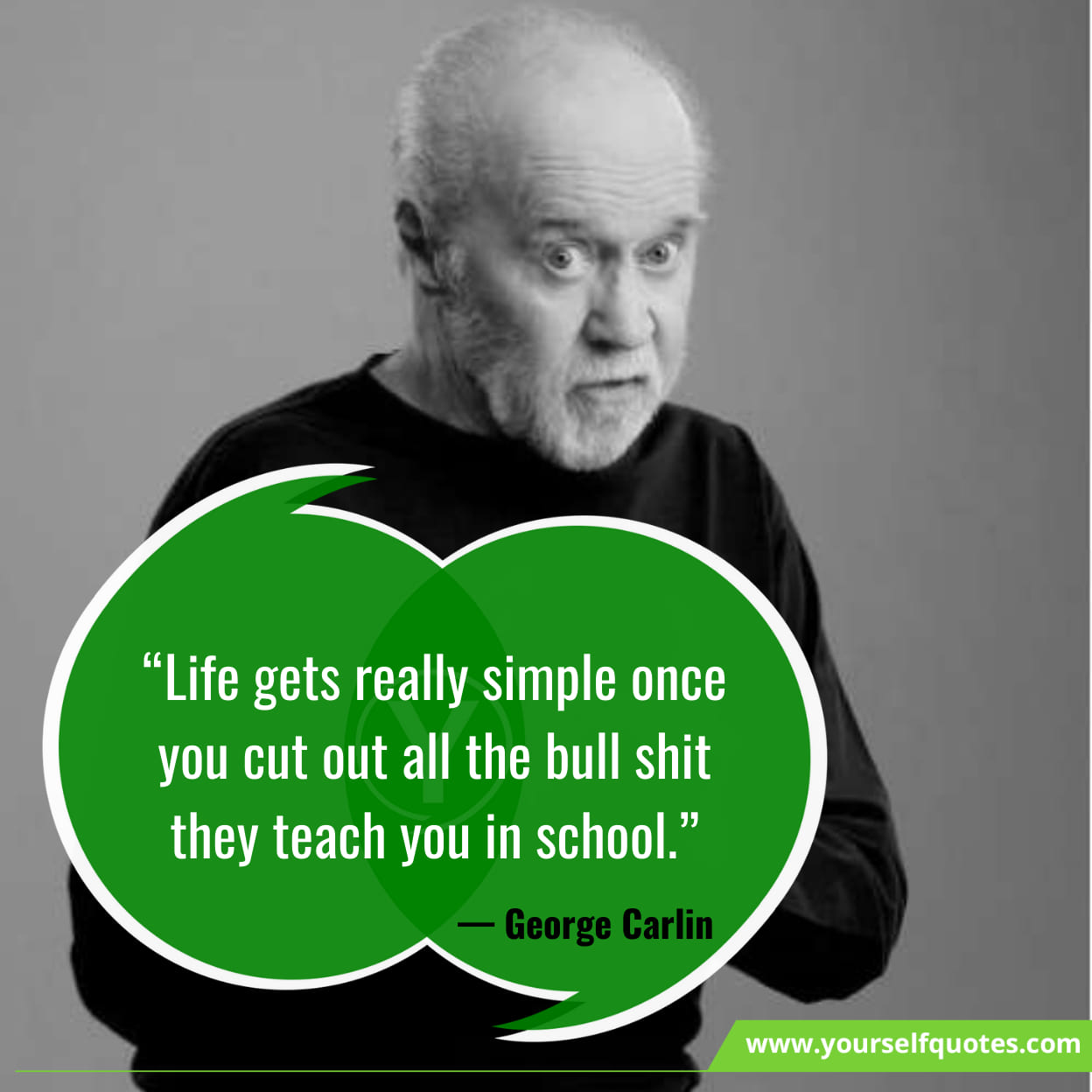 “I have as much authority as the Pope. I just don’t have as many people who believe it.” — George Carlin

“Isn’t it a bit unnerving that doctors call what they do practice?” — George Carlin

“How come when it’s us, it’s an abortion, and when it’s a chicken, it’s an omelette?” — George Carlin

“In America, anyone can become president. That’s the problem.” — George Carlin

“The caterpillar does all the work, but the butterfly gets all the publicity.” — George Carlin

“Laugh often, long and loud. Laugh until you gasp for breath.” — George Carlin

“Honesty may be the best policy, but it’s important to remember that apparently, by elimination, dishonesty is the second-best policy.” — George Carlin

“Instead of warning pregnant women not to drink, I think female alcoholics ought to be told not to fuck.” — George Carlin

“When you’re born into this world, you’re given a ticket to the freak show. If you’re born in America you get a front-row seat.” — George Carlin

“Some people have no idea what they’re doing, and a lot of them are really good at it.” — George Carlin 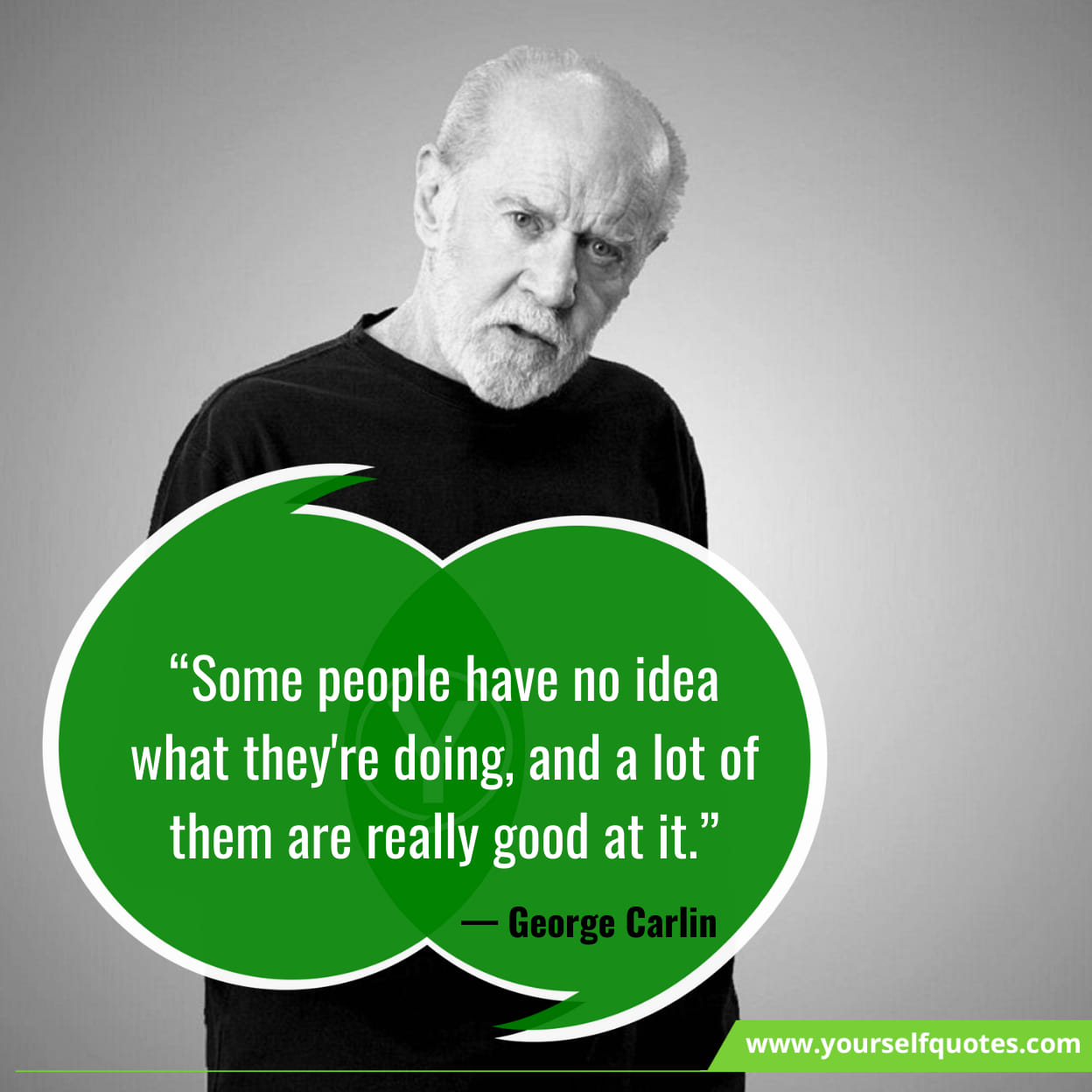 “Some people see the glass half full. Others see it half empty, I see a glass that’s twice as big as it needs to be.” — George Carlin

“It’s important in life if you don’t give a shit. It can help you a lot.” — George Carlin

“I would never want to be a member of a group whose symbol was a man nailed to two pieces of wood.” — George Carlin

“Everyone smiles in the same language.” — George Carlin

“Conservatives want live babies so they can train them to be dead soldiers. ” — George Carlin

“If the black box flight recorder is never damaged during a plane crash, why isn’t the whole aeroplane made out of that stuff.” — George Carlin

“People always tell me “Have a nice day.” Well, what if I don’t want to? What if I want to have a crappy day.” — George Carlin

“Not only do I not know what’s going on, but I also wouldn’t know what to do about it if I did.” — George Carlin

“I like it when a flower or a little tuft of grass grows through a crack in the concrete. It’s so fuckin’ heroic.” — George Carlin

“The main reason Santa is so jolly is that he knows where all the bad girls live.” — George Carlin

“Religion is like a pair of shoes….. Find one that fits for you, but don’t make me wear your shoes.” — George Carlin

“Scratch any cynic and you will find a disappointed idealist.” — George Carlin

“I do this real moron thing, and it’s called thinking. And apparently, I’m not a very good American because I like to form my own opinions.” — George Carlin

“I went to a bookshop and asked the saleswoman, ‘Where’s the self-help section?’ She said if she told me, it would defeat the purpose.” — George Carlin

“I don’t have pet peeves – I have major psychotic fucking hatreds.” — George Carlin

“There are nights when the wolves are silent and only the moon howls.” — George Carlin

“Think of how stupid the average person is, and realize half of them are stupider than that.” — George Carlin 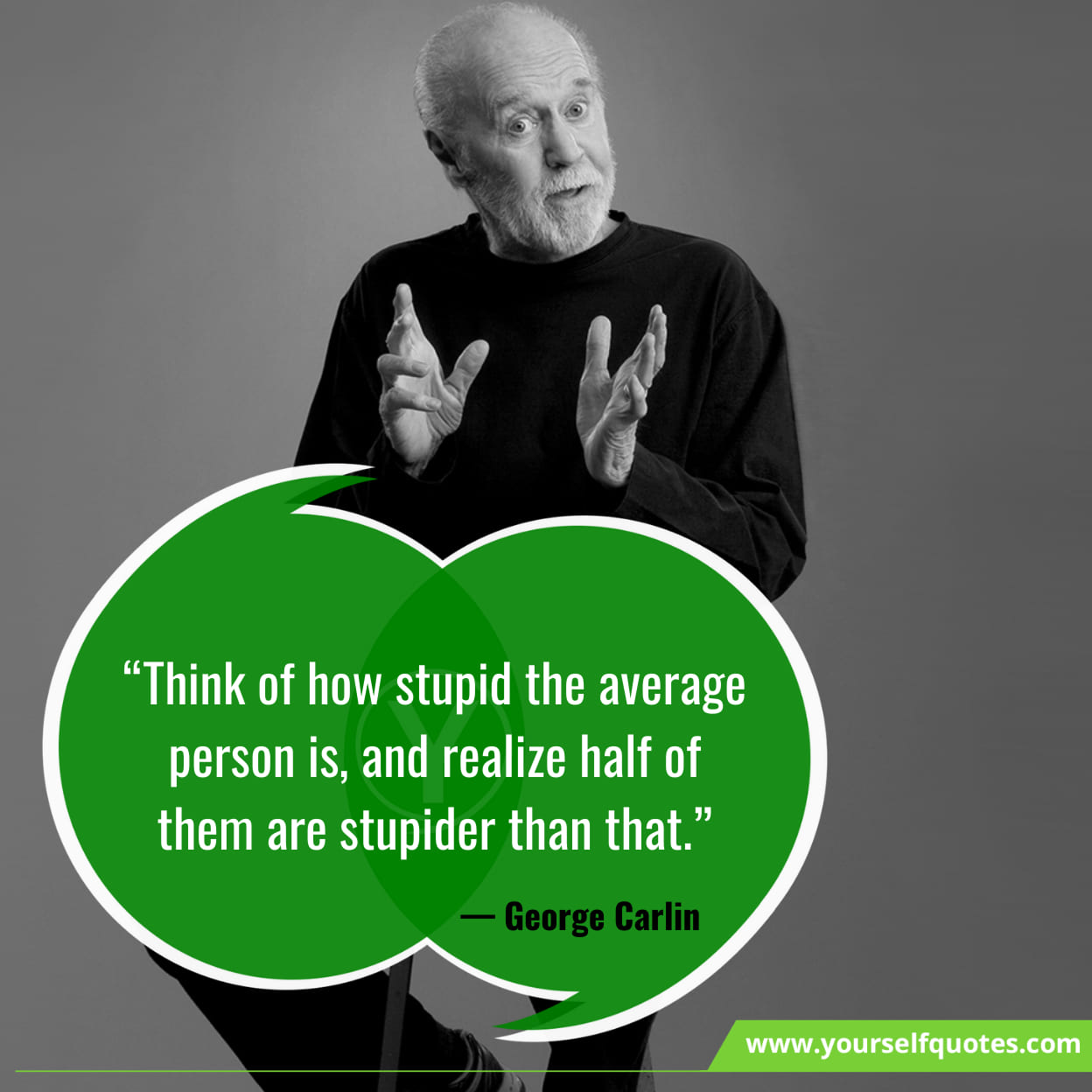 George Carlin was loved by all because of his great comedy. He was a well-renowned American stand-up comedian.

The great artist won four Grammy Awards for his comedy albums. He had deep and intense views on varied matters such as political insights, his black humor, and his observations on language, psychology, religion, and on many taboo subjects. George died on June 22, 2008, in Santa Monica, California, U.S.

The talented man will always be remembered for his great work and words of wisdom. So, let’s share out these exciting George Carlin Quotes with our loved ones, friends with just a simple click.

Which are your favorite George Carlin Quotes? Leave a comment below.