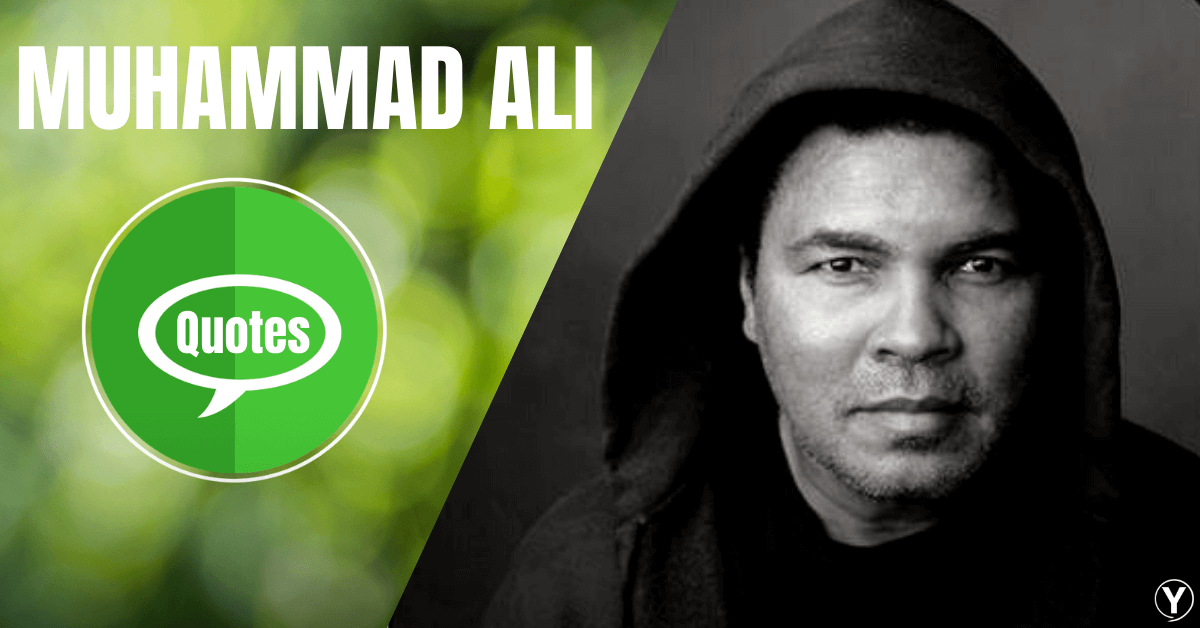 Muhammad Ali’s original name Cassius Marcellus Clay Jr. was an American professional boxer. Apart from being a great boxer, he was an active philanthropist and a passionate activist. The great boxer was nicknamed “The Greatest” because he was one of the most dominant and celebrated sports figures of the 20th century and one of the greatest boxers of all time.

The athlete was born on 17th January 1942 in Louisville, Kentucky. Ali was born to Cassius Marcellus Clay Sr. who was a sign and billboard painter and Odessa O’Grady Clay, who was a domestic helper. Ali had one sister and four brothers.

At a very young age of 12 years, Ali began his training as an amateur boxer. He won a gold medal at the age of 18 years in the light heavyweight division at the 1960 Summer Olympics. Later he converted to Islam and became a Muslim in 1961 and he acquired the name, Muhammad Ali. He was the leading heavyweight boxer of the 20th century. The great man holds the record of beating  21 boxers in the World Heavyweight Championship and has won 14 unified title bouts. He is the only boxer athlete who was named The Ring magazine Fighter of the Year six times.

This great sports personality attained success on many platforms of life. Apart from being a boxer, he indulged himself as a musician. He received two Grammy Nominations. Ali also featured as an actor and writer and released two autobiographies. In 1981, Ali retired from boxing and started spending time on charity work and religion.  This great sportsman breathed his last breath on 3rd June 2016.

So, now you must be clear in your mind that yes, Muhammad Ali was really GREAT and was indeed a real sportsman. Come let’s catch up with some of the great Muhammad Ali Quotes.

“The man who has no imaginations has no wings.” — Muhammad Ali 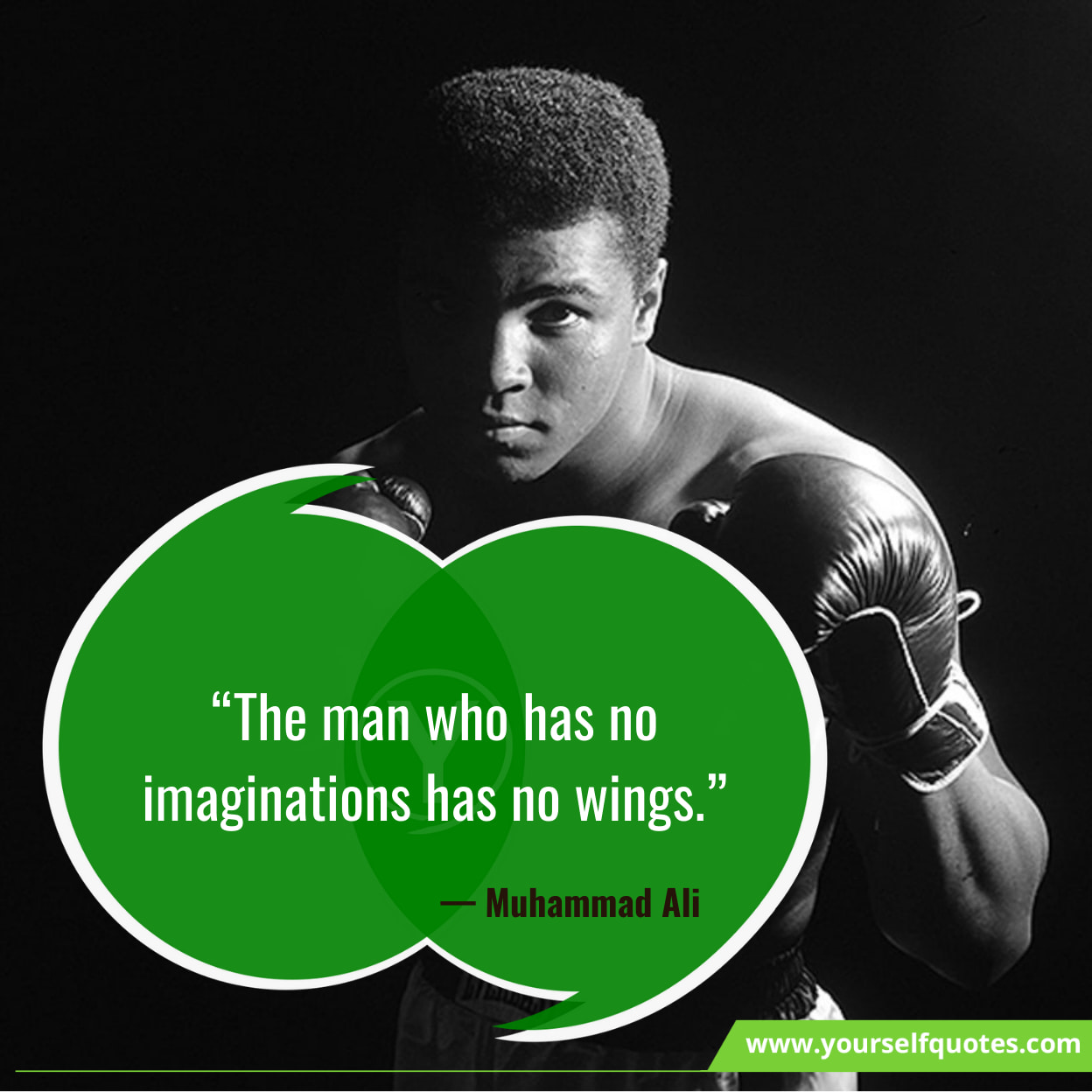 “Impossible is Nothing.” — Muhammad Ali

“The will must be stronger than the skill.” — Muhammad Ali

“Nothing is wrong, but something ain’t right.” — Muhammad Ali

“Silence is golden when you can’t think of a good answer.” — Muhammad Ali 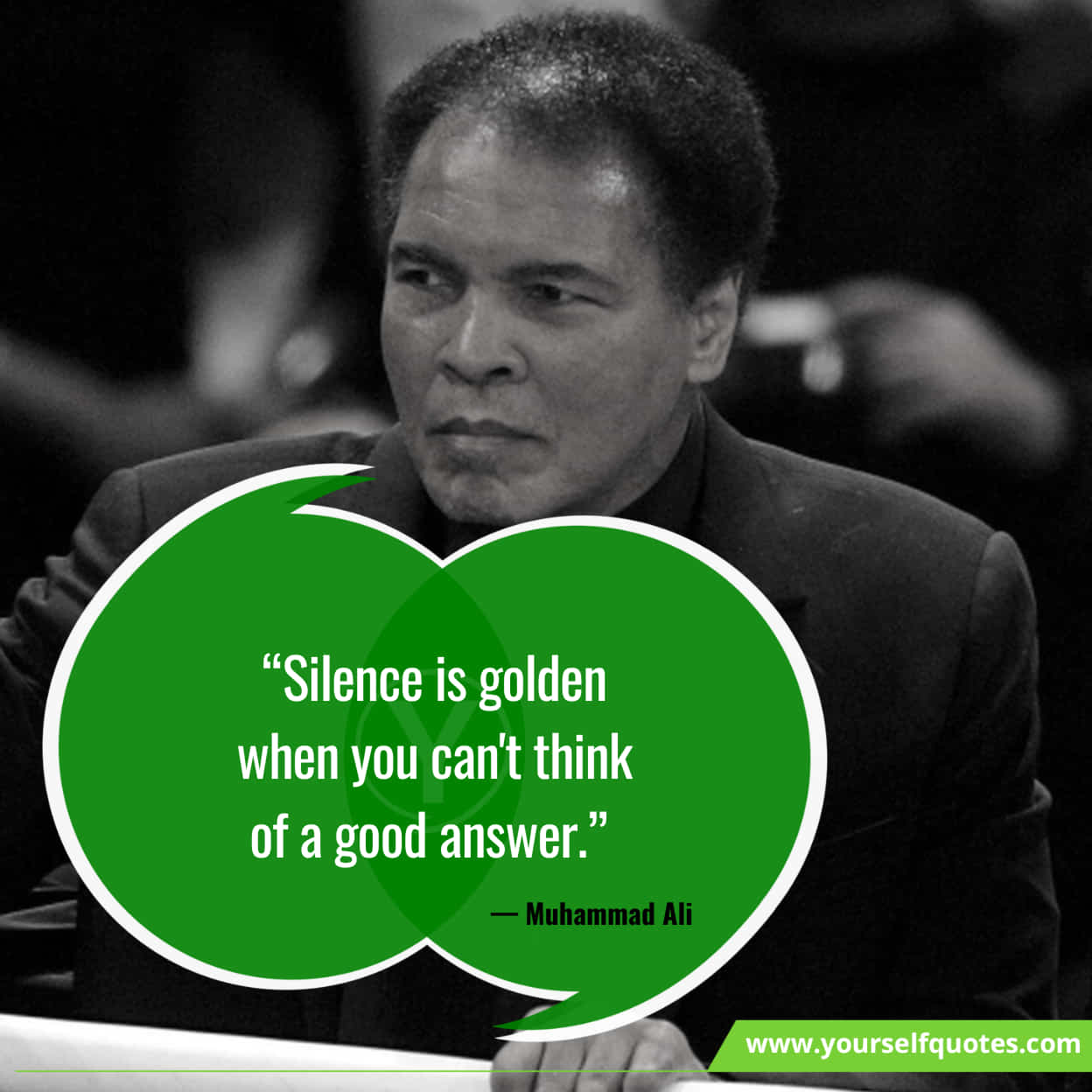 “I don’t always know what I’m talking about, but I know I’m right.” — Muhammad Ali

“It’s hard to be humble when you’re as great as I am.” — Muhammad Ali

“Why are all the angels white? Why ain’t there no black angels?” — Muhammad Ali 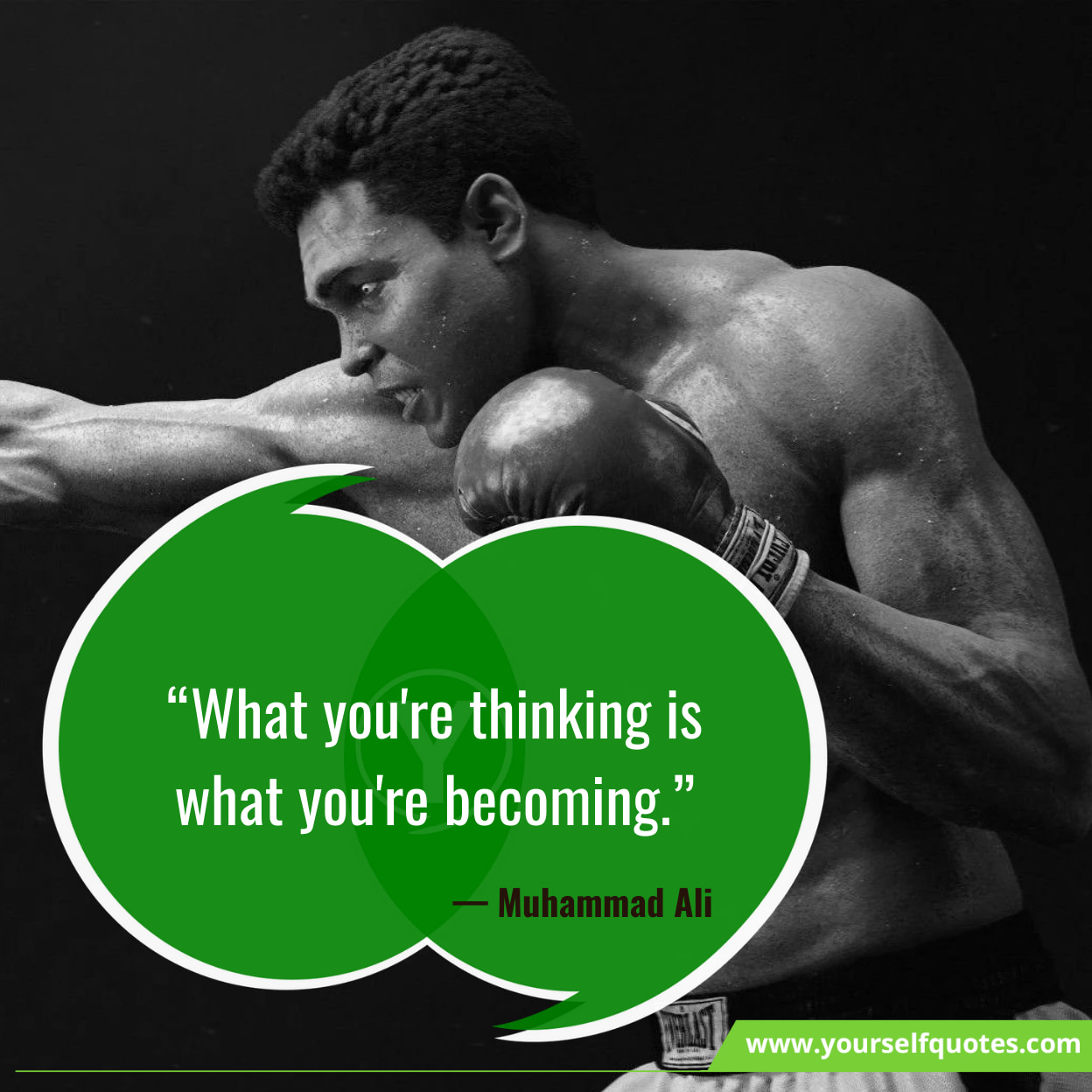 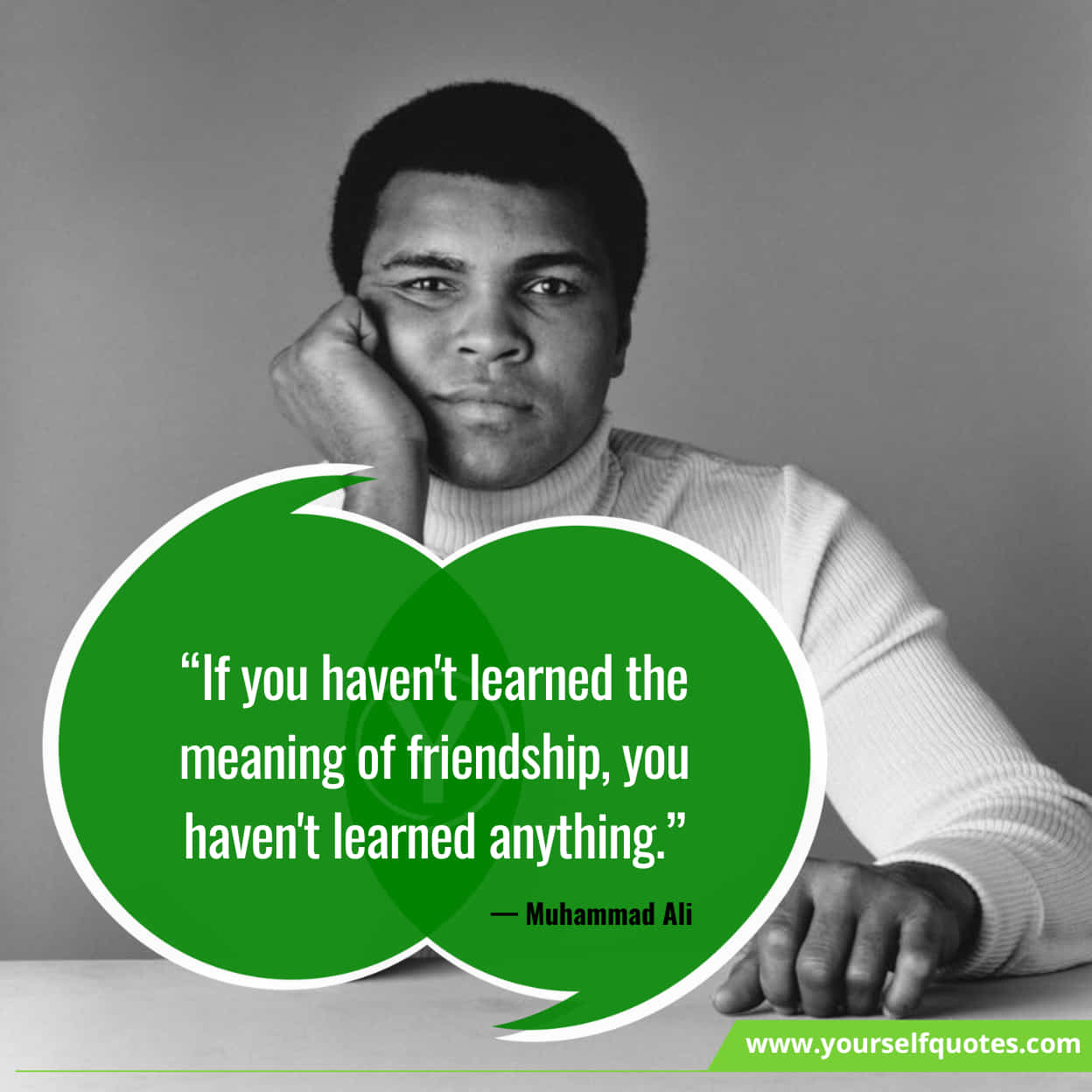 “True success is reaching our potential without compromising our values.”— Muhammad Ali 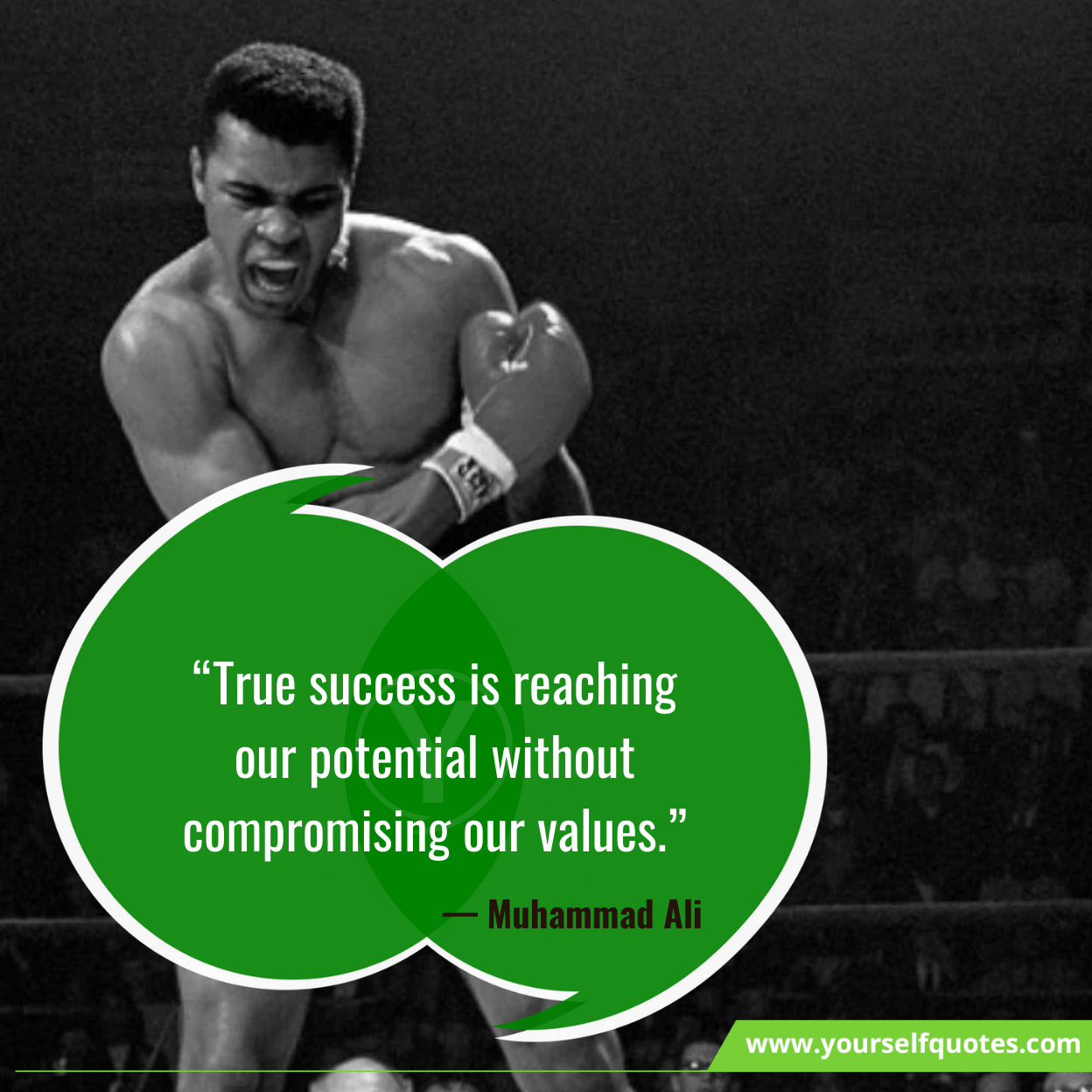 “Those who are not courageous enough to take risks will accomplish nothing in life.” — Muhammad Ali

“No one starts out at the top. You have to work your way up.”— Muhammad Ali

“I’m so fast that last night I turned off the light switch in my hotel room and was in bed before the room was dark.” — Muhammad Ali

“They’re all afraid of me because I speak the truth that can set men free.”— Muhammad Ali

“I hated every minute of training, but I said, Don’t quit. Suffer now and live the rest of your life as a champion.” — Muhammad Ali

“My face is so pretty, you don’t see a scar, which proves I’m the king of the ring by far.” — Muhammad Ali

“It’s lack of faith that makes people afraid of meeting challenges, and I believed in myself.” — Muhammad Ali

“He who is not courageous enough to take risks will accomplish nothing in life.”— Muhammad Ali 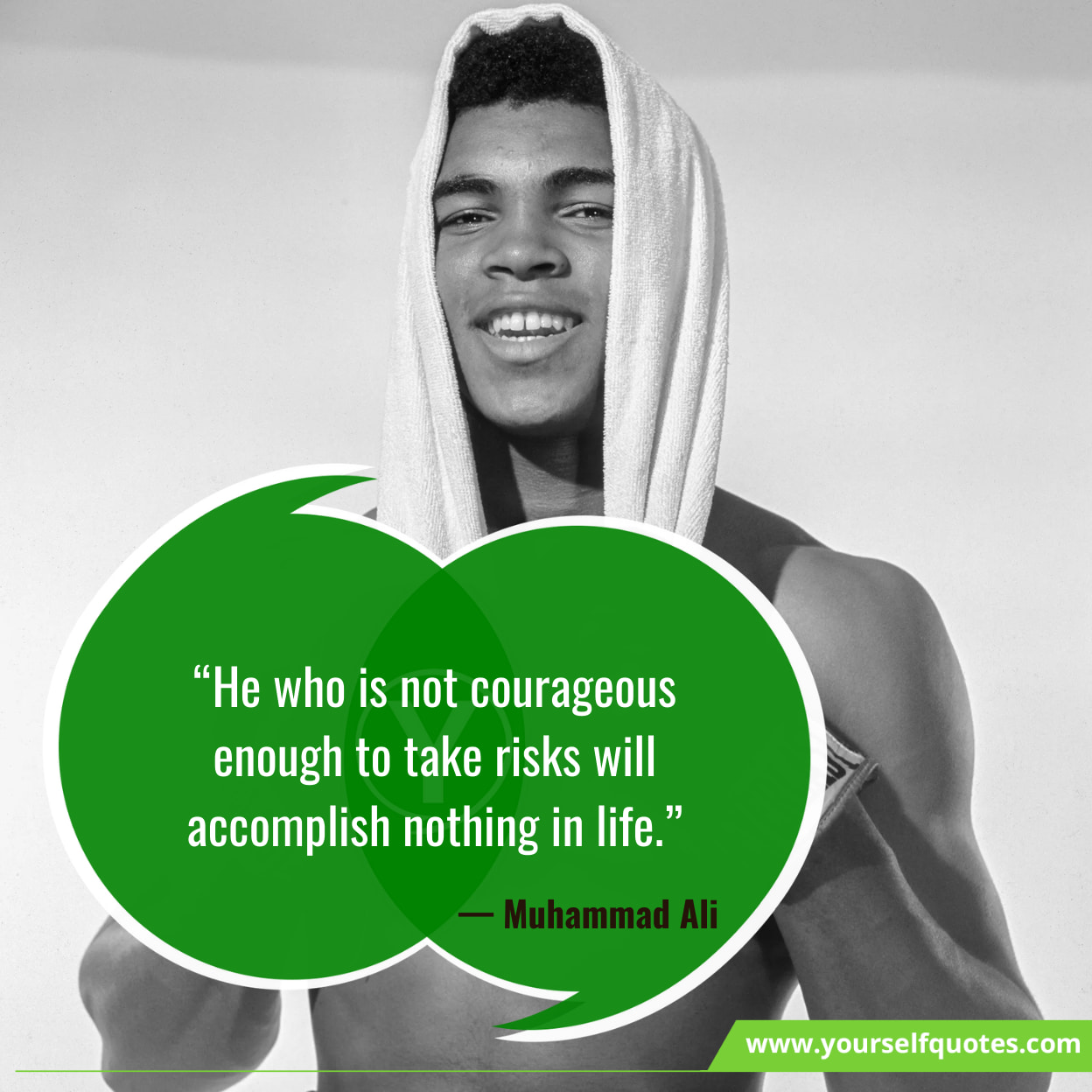 “Champions are made from something they have deep inside them: a desire, a dream, a vision.” — Muhammad Ali

“It’s the repetition of affirmations that leads to belief. And once that belief becomes a deep conviction, things begin to happen.” — Muhammad Ali

“I’m the best. I just haven’t played yet.” — Muhammad Ali

“The Nation Of Islam taught that white people are devils. I don’t believe that now; in fact, I never really believed that.”— Muhammad Ali

“I wish people would love everybody else the way they love me. It would be a better world.” — Muhammad Ali 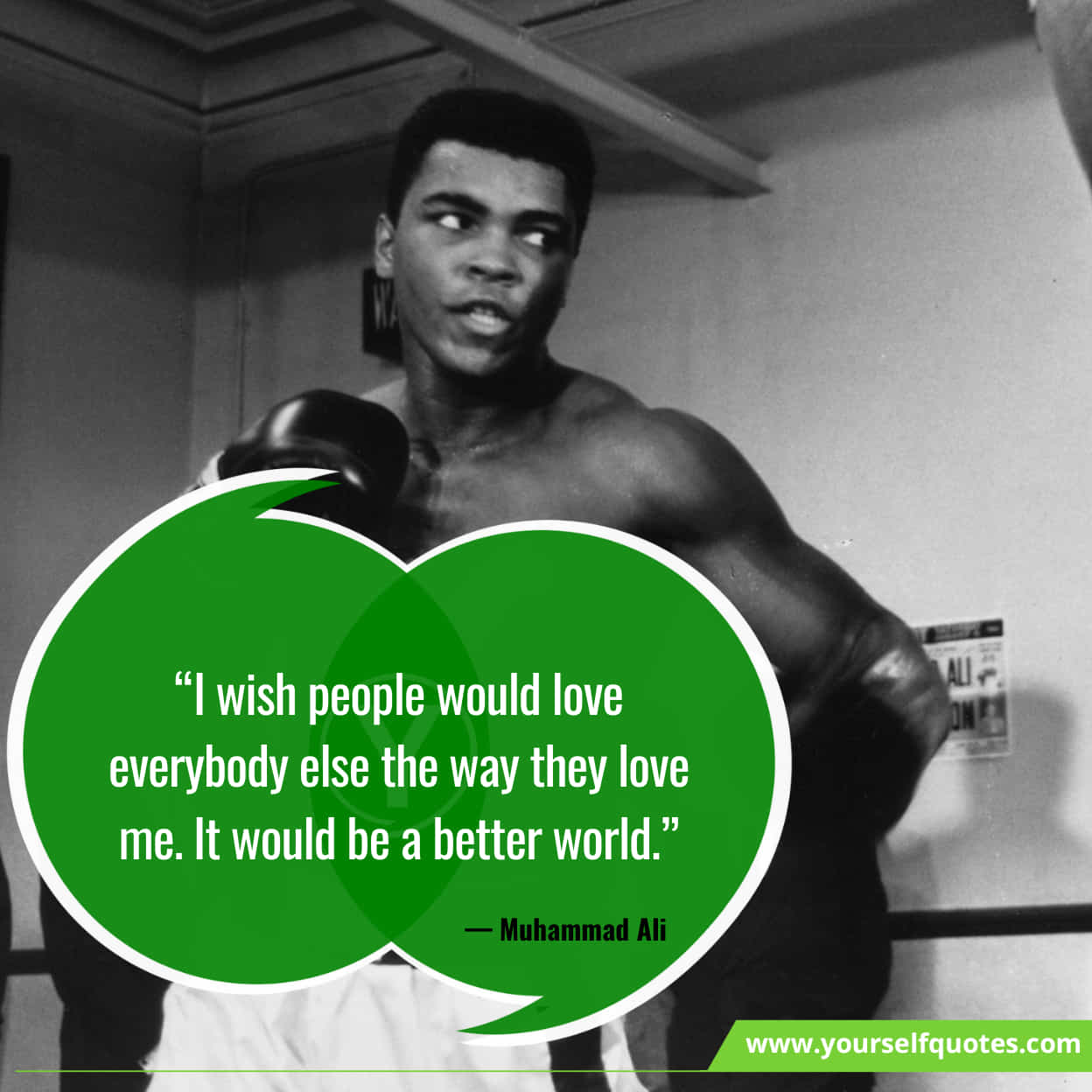 “I hated every minute of training, but I said, ‘Don’t quit. Suffer now and live the rest of your life as a champion.” — Muhammad Ali

“My way of joking is to tell the truth. That’s the funniest joke in the world.” — Muhammad Ali

“So instead of investing your time in a passion, you’ve sold your life to work for an uncaring machine that doesn’t understand you. That’s the problem with our society. And what’s the reward? Go home and get a big TV.”— Muhammad Ali

“The time you spend hating on someone robs you of your own time. You are literally hating on yourself and you don’t even realize it.”— Muhammad Ali

“It’s been one of the most important tools for me in personal growth for understanding myself, how I am, and what effect I do have on other people.”— Muhammad Ali 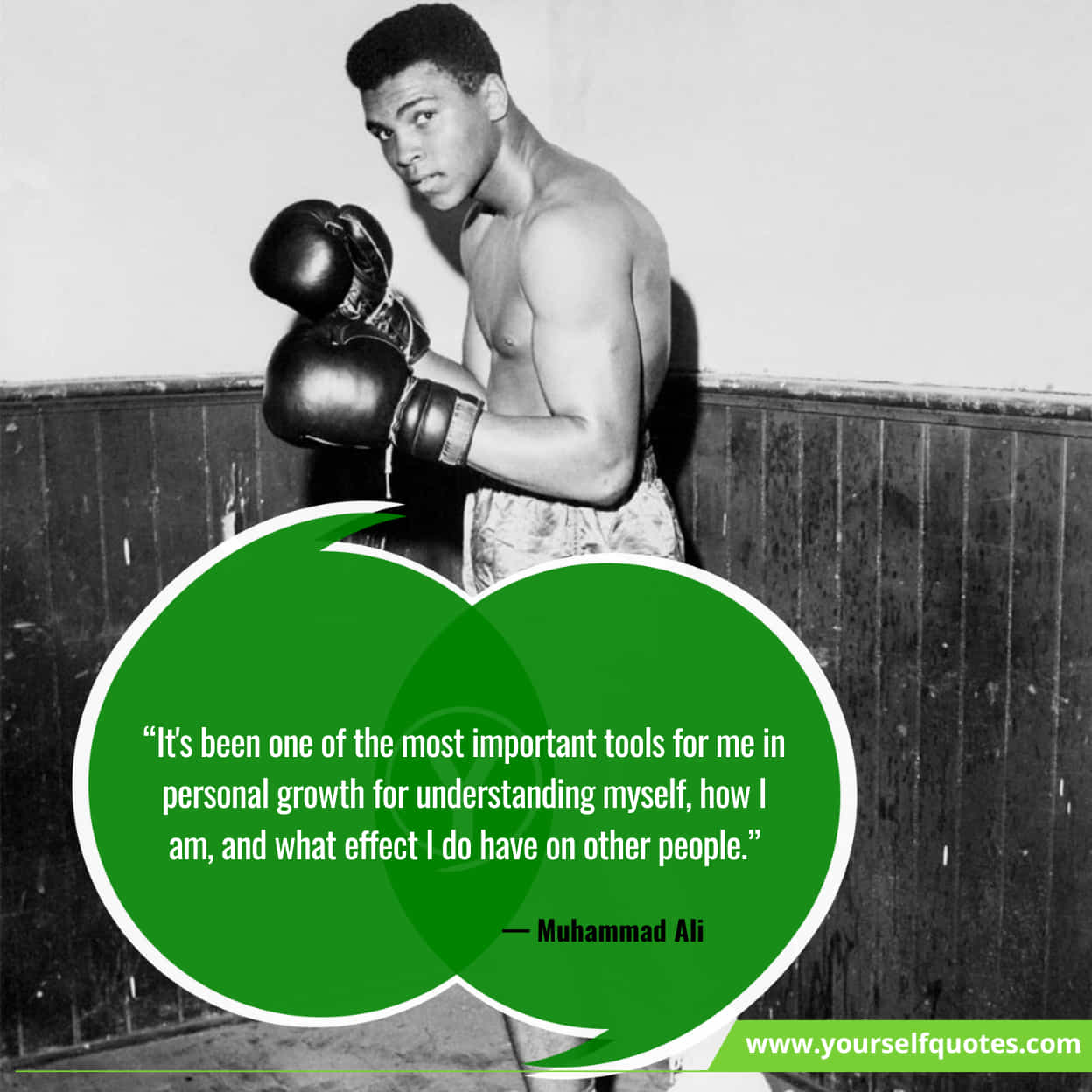 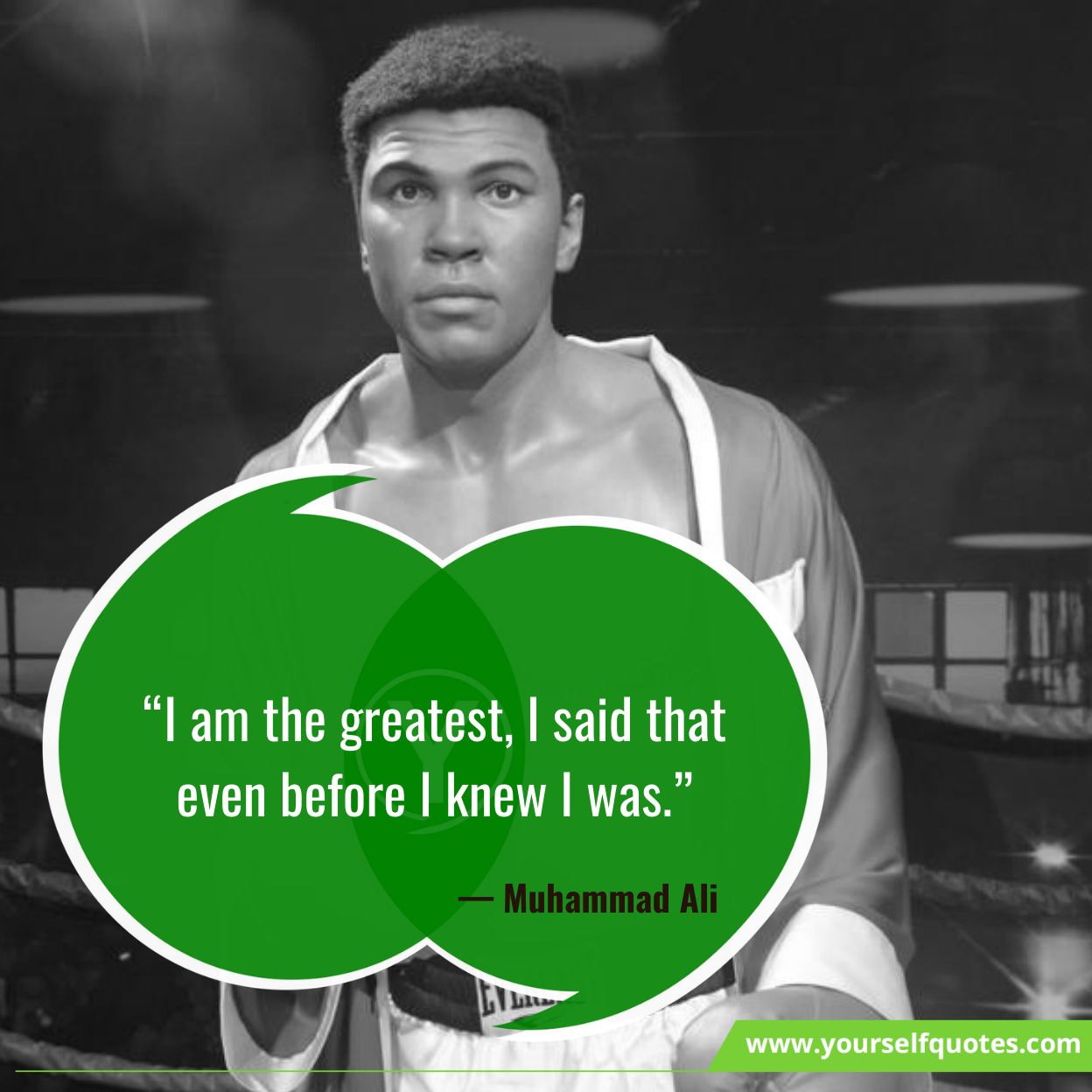 Muhammad Ali was a great boxer and defeated every top heavyweight during his time. The time when he was an active boxer was known as the golden age of heavyweight boxing. The Ring Magazine titled him “Fighter Of The Year”. TIME Magazine featured him as one of the 100 Most Important People of the 20th Century.

On 9th November 2005, Ali was adjourned with the Presidential Medal Of Freedom from then-President George W. Bush at the White House. Ali was married four times and he had seven daughters and two sons. He was known for trash-talking, and often free-styled with rhyme schemes and spoken word poetry, anticipating elements of hip hop.

Indeed, Muhammad Ali was a great athlete and a true sportsman. His personality will always amaze you. So why wait, come and share these great Muhammad Ali Quotes with your family, friends, and loved ones.

Which are your favorite Muhammad Ali Quotes? Leave a comment below.

Retirement Wishes For Coworker and Colleague

Love Messages For Him and Her