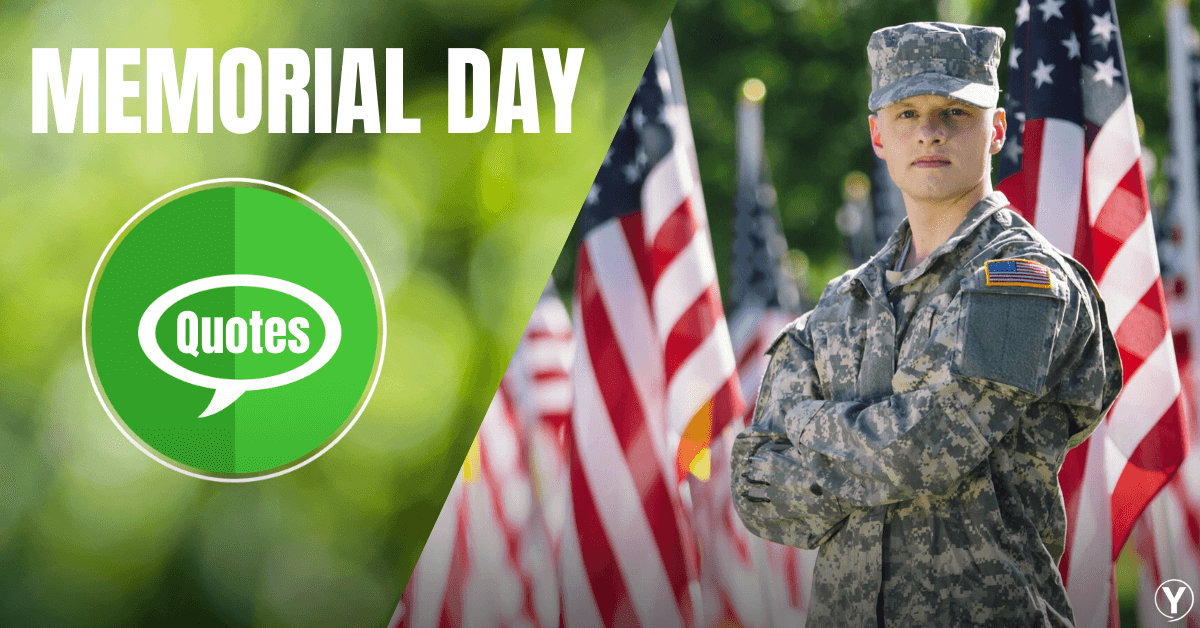 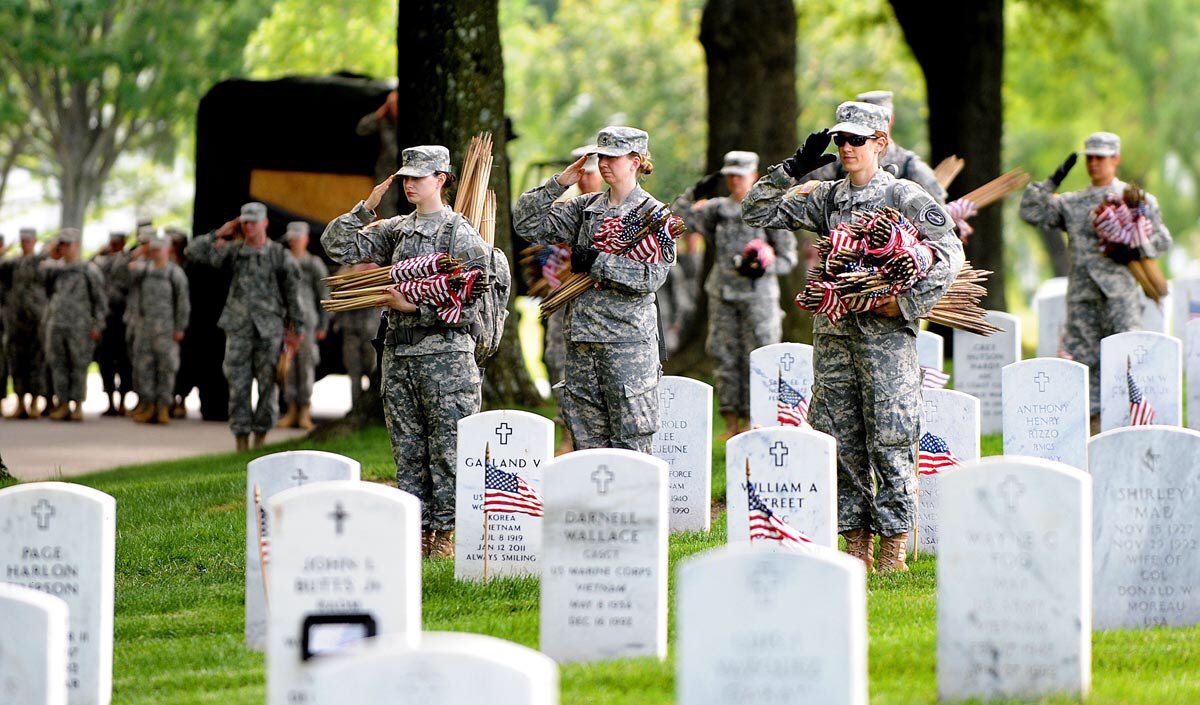 The Americans celebrate this day with some unique ways of paying homage to dead heroes. They usually send a note to veterans. They often help the families of martyrs by providing them with the household project or some work them. They visit the local cemetery and place an American Flag and flowers on the graves. People participate in the NATIONAL MOVEMENT OF REMEMBRANCE.

“Memorial Day is a time to honour, reflect, and remember those who have made the ultimate sacrifice for their country.” 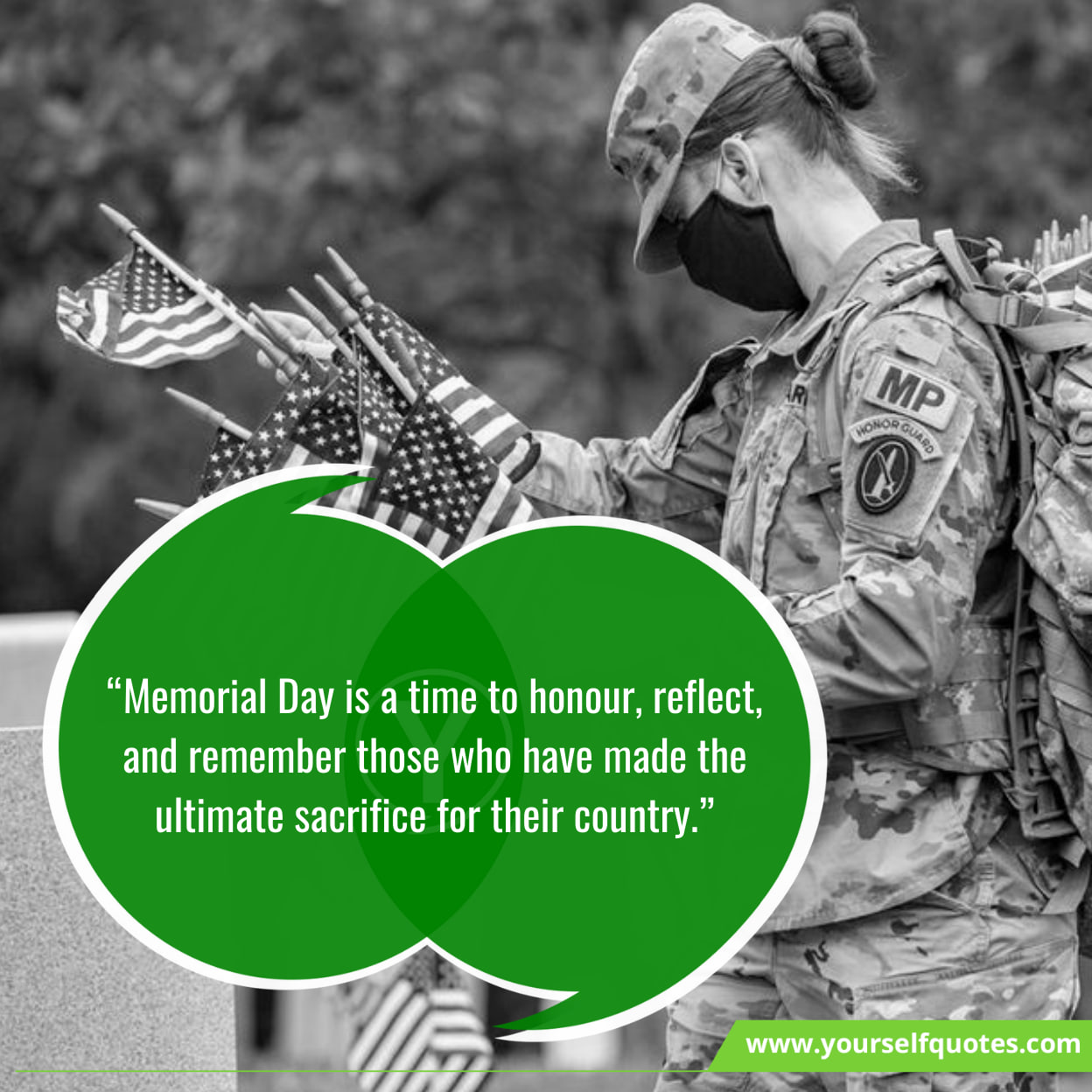 “Their silence is a beginning of the golden period; their sacrifice marked starting of a great revolution, Happy Memorial Day”

“Greater love has no one than this Than to lay down one’s life for his friends.”

“Memorial Day this year is especially important as we are reminded almost daily of the great sacrifices that the men and women of the Armed Services make to defend our way of life.” ― Robin Hayes

“Our nation owes a debt to its fallen heroes that we can never fully repay, but we can honor their sacrifice.” ―Barack Obama 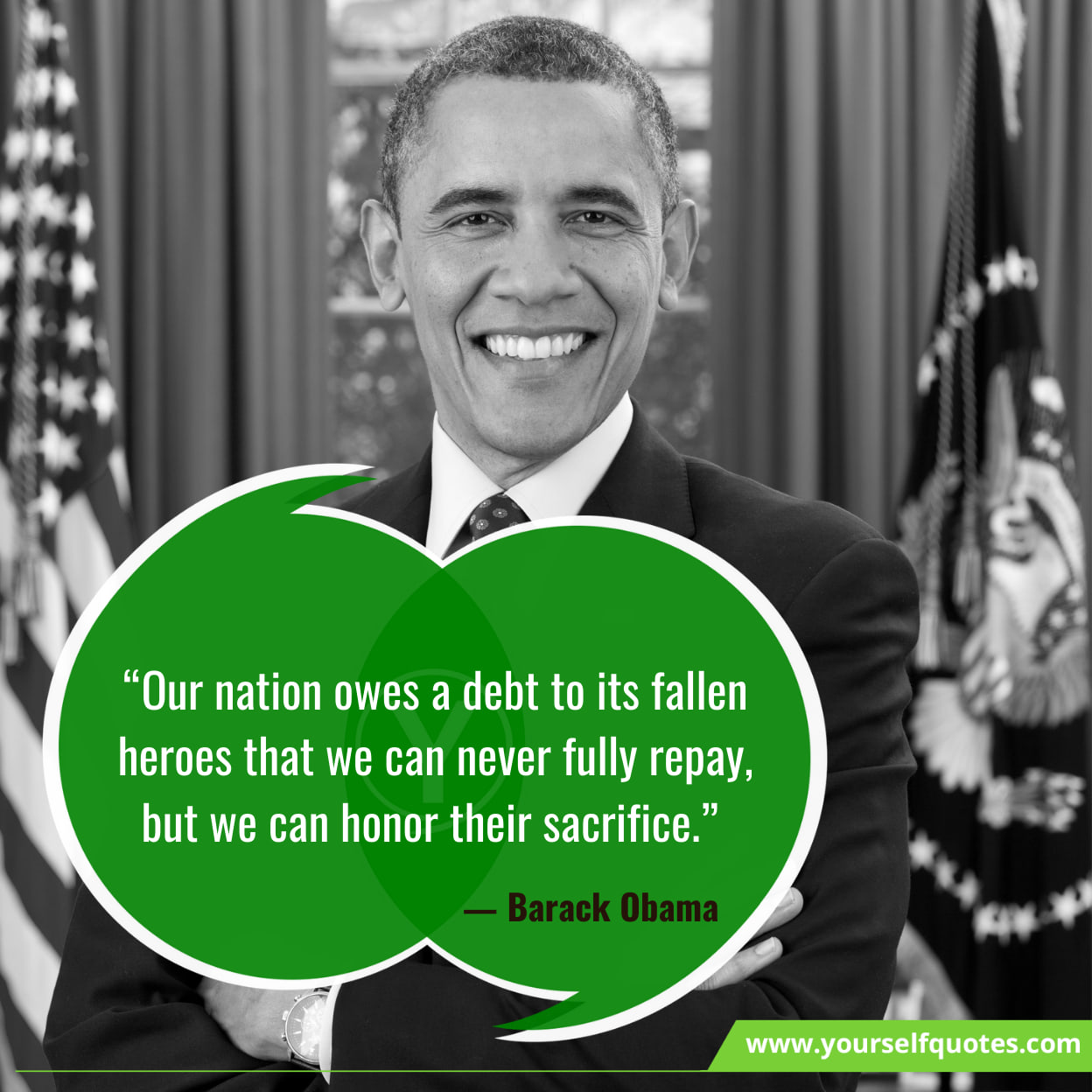 “They are dead, but they live in each Patriot’s breast, And their names are engraved on honour’s bright crest.” ― Henry Wadsworth Longfellow

“Thank you so much to all the servicemen and women who have gone above and beyond protecting our country, Happy Memorial Day.” 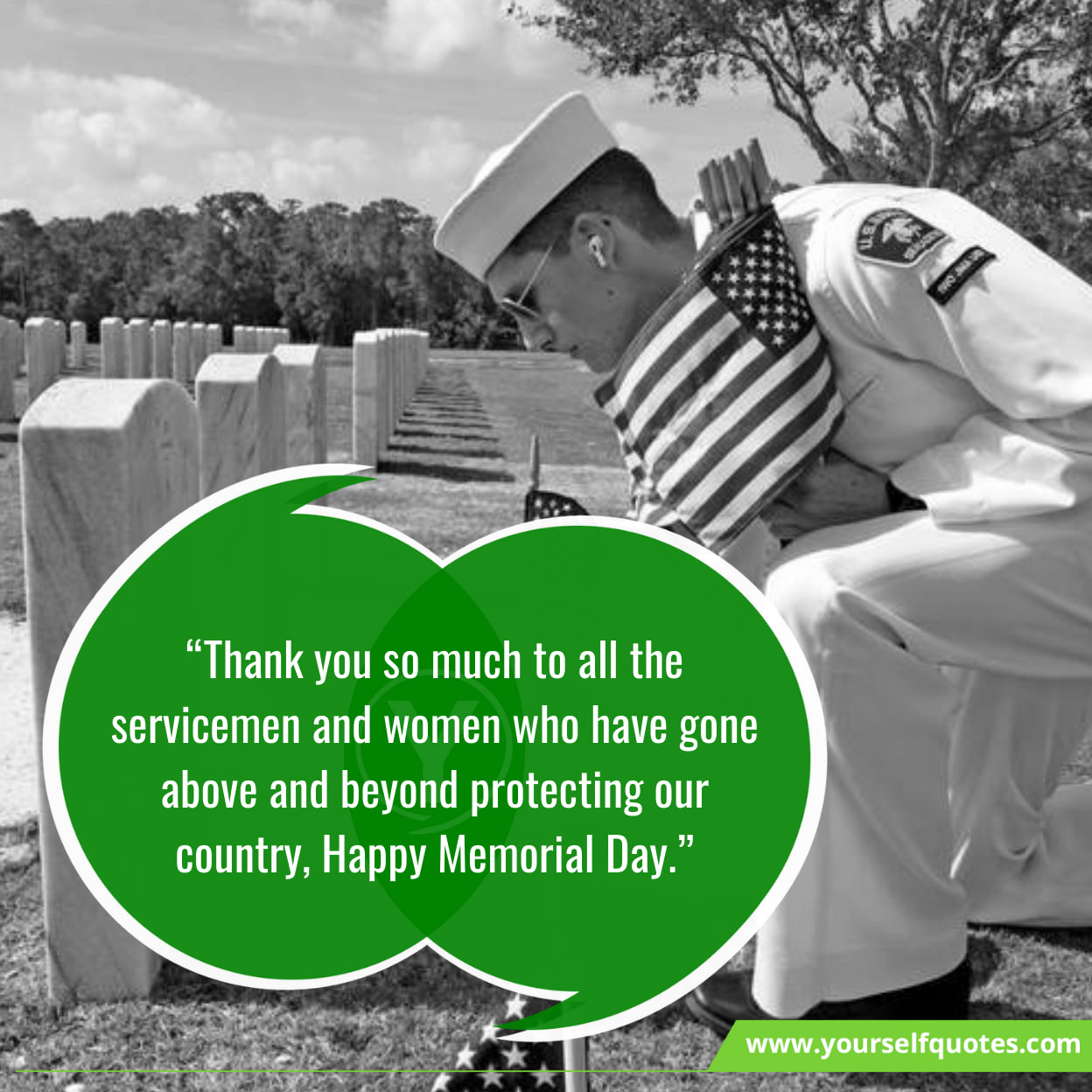 “Today is the day to remember all those who sacrificed their lives for the security of America…. Wishing you a very Happy Memorial Day.”

“Let us never forget the price we have paid to get this independence…. Let us always remember the sacrifice of every soldier…. Happy Memorial Day.”

“Sending warm wishes to the arm forces of America who have always been fighting for the glory, happiness and growth of the country and countrymen. Happy Memorial Day. May God bless you!!”

“Real heroes never die. They always live in our hearts to inspire us, motivate us and guide us in our lives. Sending you warm wishes on Memorial Day in remembrance of the true heroes we lost.”

“Sending lots of love to our armed forces and their families who have always contributed to make our nation a better place to live. Sending heartfelt wishes on Memorial Day.”

“May God bless all the servicemen and women in present and past for their selfless contribution toward country and countrymen. Warm wishes to everyone on Happy Memorial Day.”

“Today is the day to thank all those who brightened our lives with happiness and freedom. Let us bow our heads and remember the sacrifices of the soldiers. Happy Memorial Day.”

“And I am proud to be an American, Where at least I know I am free. And I Won’t forget the men who died, who gave that right to me.”

“Remember those who served. All gave some, some gave all, Happy Memorial Day.” 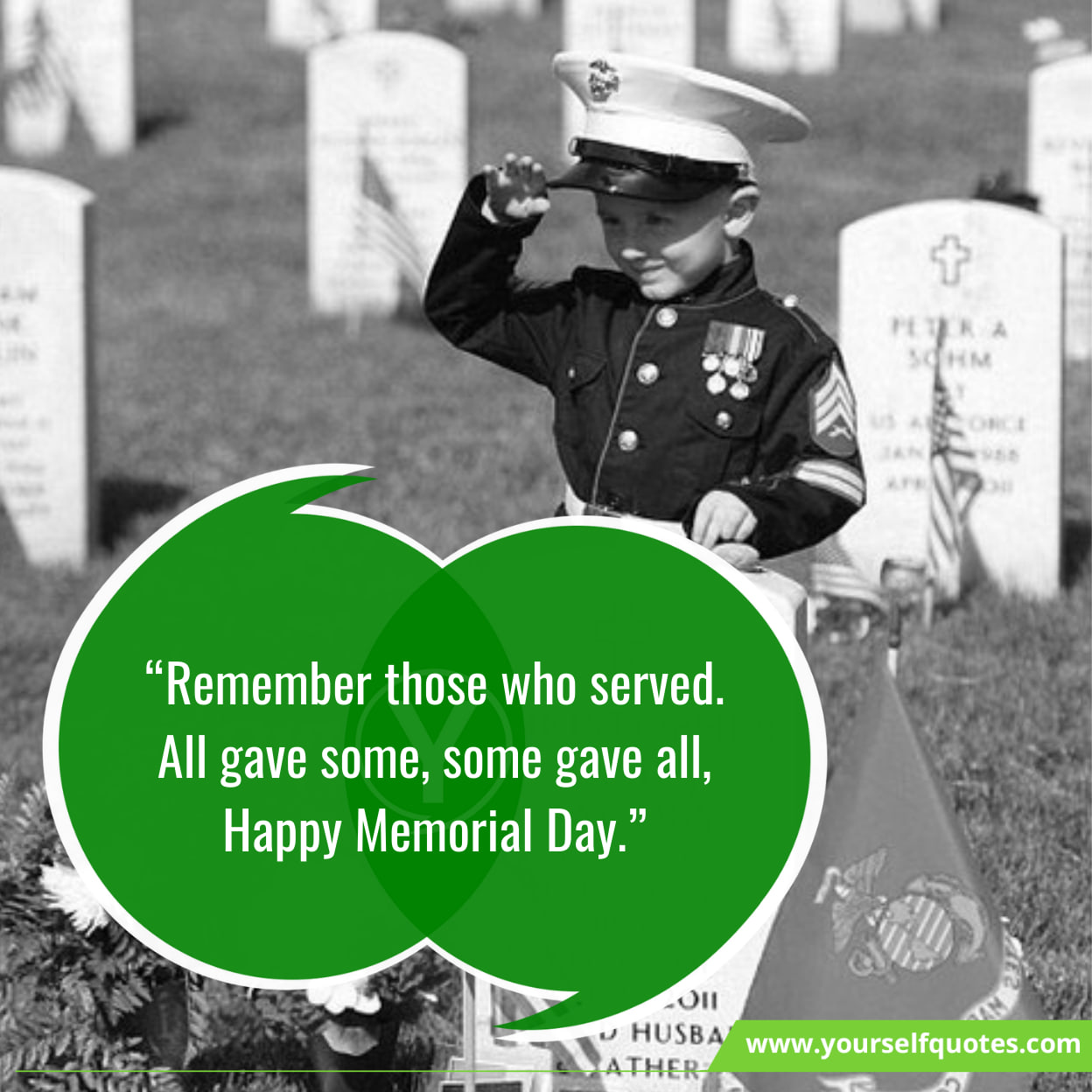 “Our nation owes a debt to its fallen heroes that we can never fully repay, but we can honour them.”

“Nothing means anything till the time you don’t have the freedom to think, freedom to speak and freedom to act. Let us thank all those who brought freedom to our lives. Happy Memorial Day.”

“Today let us thank all the Veterans, fallen Heroes of America who gave away their lives to serve the nation. Wishing you and your family a warm and Happy Memorial Day.”

Decoration Day is popularly known as “Memorial Day” was first celebrated on 30th May 1868, by General John A. Logan. This day marks the commemoration of all American people who died in all wars. It is known as Decoration Day because the graves of soldiers are decorated with an American flag and flowers so as to pay tribute & respect.

So as to pay respect and contribute to the patriotic movement share out these respectable Memorial Day Quotes Wishes, Messages, Slogans, Sayings.

Which are your favorite Memorial Day Quotes, Wishes? Leave a comment below.